For Southern California hikers, there are a few guidebook authors’ names that should sit in prominent places on bookshelves — but especially in the San Diego area, Jerry Schad towers above all others. His long-running Afoot and Afield series has been called “the bible of San Diego hiking” and for good reason.

Now our own San Diego hiking guru Scott Turner has taken up the mantle and adopted the series for its Fifth Edition, which includes a staggering 282 trails all across San Diego County. We took a moment to chat with Scott about this monumental project.

How did this project come about?

I had started writing for Modern Hiker while using Afoot and Afield for inspiration in early 2014. As I documented more and more hikes, I began to notice that some of the information had gone out of date. I knew that Jerry Schad had passed away in 2011, and I became very interested in whether a new edition might come out. When my internet stalking revealed that there was no new author and no new edition in the works, my wife, Kelly, suggested that I propose revising the old edition. Wilderness Press liked my proposal, and they told me to get to work. 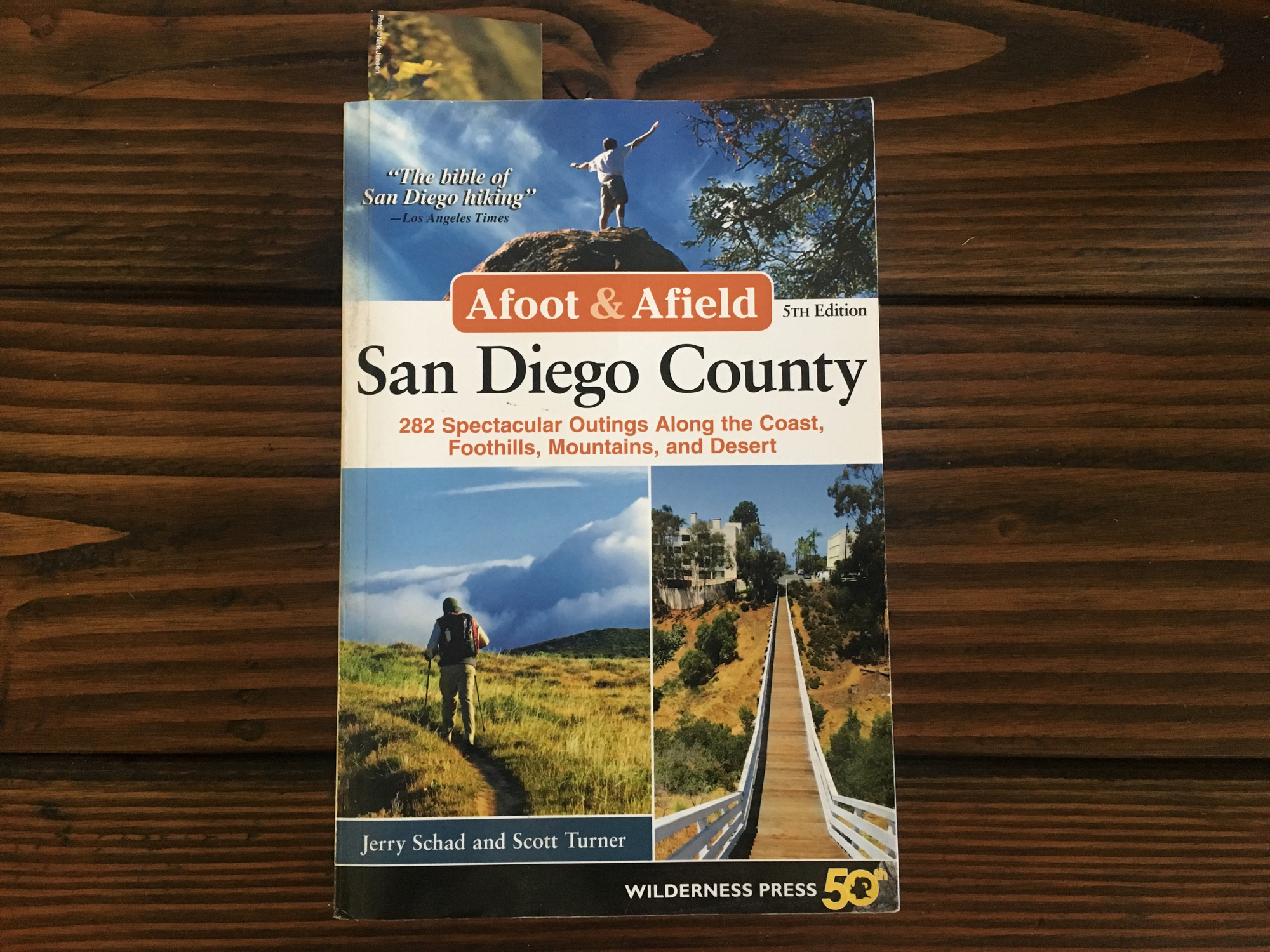 Just about everybody I met along the way was excited and supportive about what I was doing. It helps that I approached the book as if I was its steward rather than some random guy who wanted to recreate a very popular book in his own image. I never felt intimidated or burdened by the task because it was such a joyful experience from start to finish. Furthermore, whatever insecurity I had about my lack of credibility compared to a master hiker vanished as I hiked more and more of the trails and gained the requisite knowledge and experience to do the book the justice it deserved. Most people I met were just relieved to know that somebody was taking care of the book, and that was a very comfortable role to fill.

Was the Schad Estate supportive of your efforts?

I actually didn’t have any contact with any of his family or his widow until after the book was completed. Just prior to the book’s publication, I corresponded with Jerry’s widow, and she shared that it was very important to Jerry that the Afoot and Afield series carry on under new authors. David Money Harris (Afoot and Afield Inland Empire) assumed authorship of the Orange County and Los Angeles County volumes at Jerry’s request, but given that San Diego had been the first and most successful, there was some anxiety – particularly from his friends – that San Diego might fall by the wayside. The interested parties were relieved and pleased that San Diego received its revision and that I will continue to maintain it for the foreseeable future. 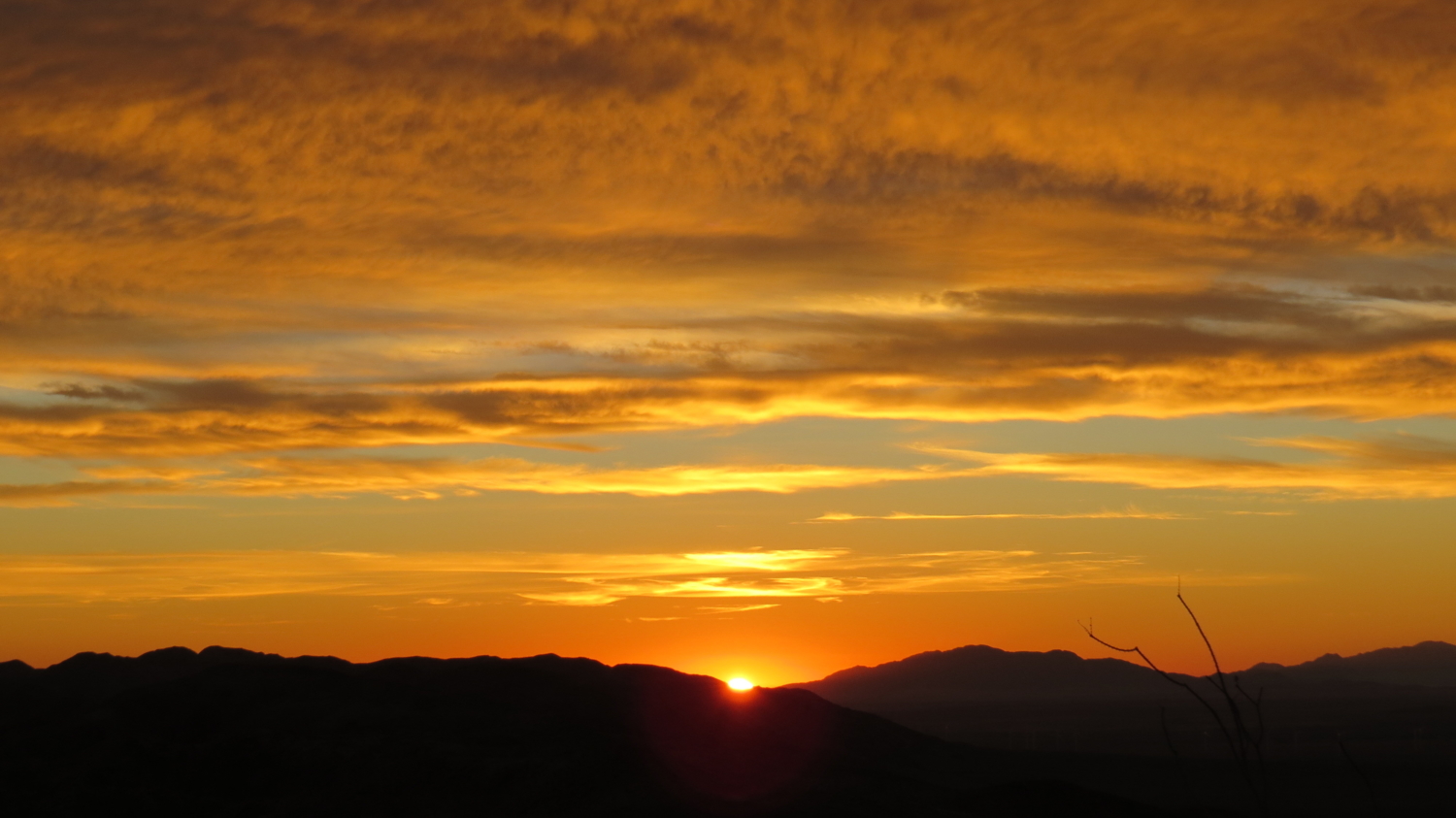 Here at Modern Hiker, we’ve come to know and love your style of outdoor writing – can readers expect fun tangents about local history and native trees?

Absolutely. It’s amazing how so many trails have a rich backstory of human history and natural history. Considering that Southern California is one of the most biologically diverse regions on the planet, it would be a massive disservice not to try to impart a bit of knowledge about what people might encounter. The same goes for the history. This region has been inhabited for thousands of years, and every trail has a story behind it. Not only does that deepen a hiker’s experience, but the process of researching and learning is one of my favorite parts of writing trail guides.

You have put an impressive amount of miles on your hiking boots over the years – was there anything that still managed to surprise you on the trail while writing this book?

I think what’s surprised me the most is that I never for a second have grown weary of hiking. I don’t mean to say that I don’t get tired and start longing for a burrito at mile 17, but I have as much passion and enthusiasm for the activity as I did when I was stumbling my way up Boney Mountain while wearing jeans and Converse All-Stars. Secondary to that, I was surprised at how much I love Anza-Borrego Desert. For an area that intimidated and confused me prior to the book, I still feel frequent physical longings to wander up an unnamed desert canyon toward the middle of nowhere. Finally, it never ceases to surprise me that I can get “The Bear Went Over The Mountain” stuck in my head while hiking for hours and hours on end. 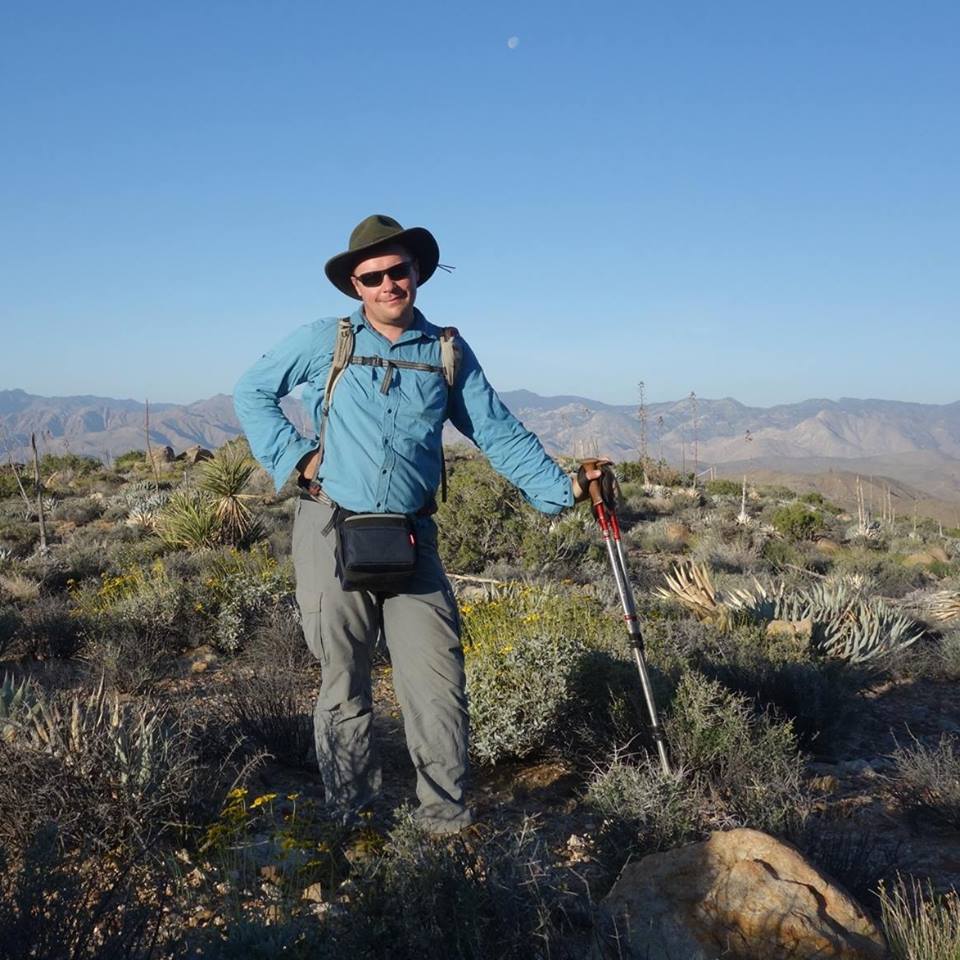 The amount of information and options that are out there can overwhelm people sometimes – but you may be one of the most organized hiking planners I’ve ever met. What’s your system for keeping motivated to get out on the trails so often?

Well, I come by the motivation naturally. I’d hike every day if it was possible. Now that I have an infant in my life, I have to be even more judicious and prepared so that I can make the most of the opportunities to get out. Planning and preparation are almost as fun for me as the hiking itself, and I spend a lot of time researching, staring at maps, and creating endless lists. It helps me to create writing projects that focus on exploring an area thoroughly. Most hikers pick a handful of popular destinations, but they never get around to digging into the “deep cuts.” Exploring those “deep cuts” gives me ideas for projects, which can be anything from “add ten hikes in the San Jacintos to Modern Hiker’s catalog” or “self-publish a book on Sequoia National Park’s trails” so that I have a focus. I could go on and on about the spreadsheets and the lists, but ultimately all I’m doing is creating a very extensive, ever-growing bucket list while doing my damnedest to complete it before my legs fall off.

one of Turner’s many hiking spreadsheets

Although you’ve lived in San Diego for several years, your ‘ancestral homeland’ is right near the Simi Hills. Are there any L.A. area trails you miss?

I have loved and always will love the Santa Monica Mountains, and I steal away for a hike or two every time I visit my folks. Specifically, I love the Mishe Mokwa Trail, Crags Road to Century Lake, the Cheeseboro/Palo Comado Loop, Tri-Peaks, and La Jolla Valley. Those are some of the first places I ever hiked, and just like hearing Guns N Roses for the first time as an 8-year old, they represent experiences I’ll never forget.

For someone just getting started hiking in San Diego, what are the must-dos?

There’s a cluster of old favorites that everybody should hike at least once: Torrey Pines, Iron Mountain, Cowles Mountain, Woodson Mountain, Cabrillo National Monument, Penasquitos Canyon, etc. However, I think an even bigger “must-do” for hikers in San Diego is to cultivate an open mind and a willingness to try new things. Those formative hikes I listed are all great, but we have an astonishing amount of variety here. I encourage everybody to stretch their comfort zones and try some of the lesser known hikes like High Point, Monument Peak, Azalea Glen, Doane Valley, Mt. Gower, etc. 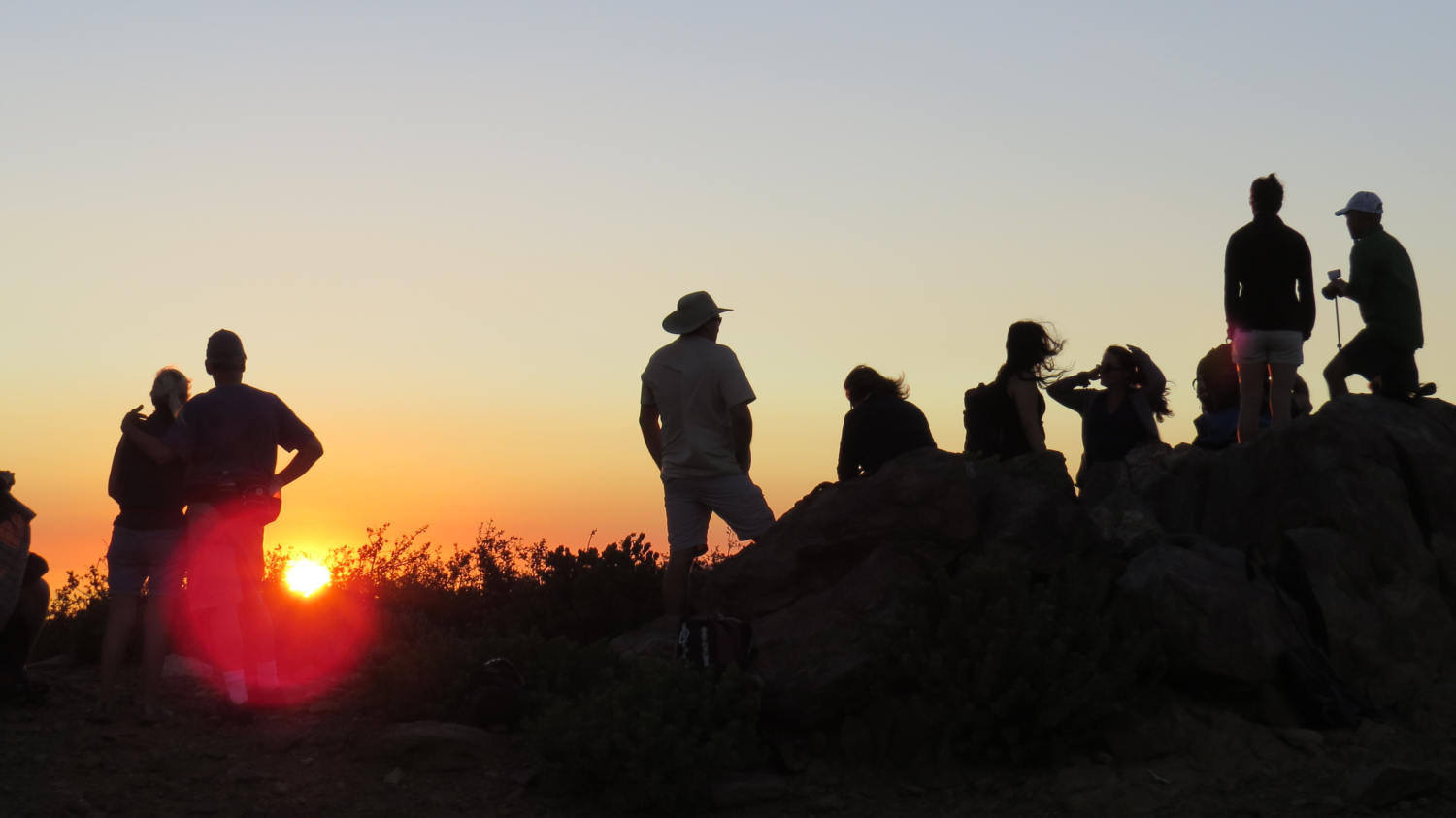 Finally, what’s next on your planning spreadsheet?

I’ve written about 85% of a hiking guide for the Generals Highway and Kings Canyon Scenic Byway in Sequoia-Kings Canyon National Park that I will finish in the rare moments that my 9 month old is actually sleeping. I’m dying to write a hiking guide for the Eastern Sierra Scenic Byway as well. I also love to create goals fleshing out specific areas for Modern Hiker, and I’ve got my eye on adding more for Orange County, Riverside County, and the Sierra Nevada Mountains. Inspired by our very own Shawnté Salabert, I’m going to attempt to hike a county’s worth of the Pacific Crest Trail every year or two, with the long-term goal of hiking the rest of the trail for my 50th birthday. I also want to get my kid out on the trail as much as possible. And finally, I have a lifelong goal of hiking 25,000 miles. I based the start point on when I first began using spreadsheets for keeping track of what I hike. To date, I have hiked 6,783.5 miles since January 2011. I’m 27% of the way there.