Cowles Mountain is hardly a secret to San Diego hikers. This easily accessible, moderately challenging peak can be reached from several different directions, and it offers the best views (marine layer permitting) of downtown San Diego county. In fact, the peak is the dead opposite of a secret, as the summit can be crowded with visitors at any given time on any given day. Therefore, I’ve included a side trip to lesser visited Pyles Peak, which is an easy 2 mile addition that branches off from the summit of Cowles Mountain. 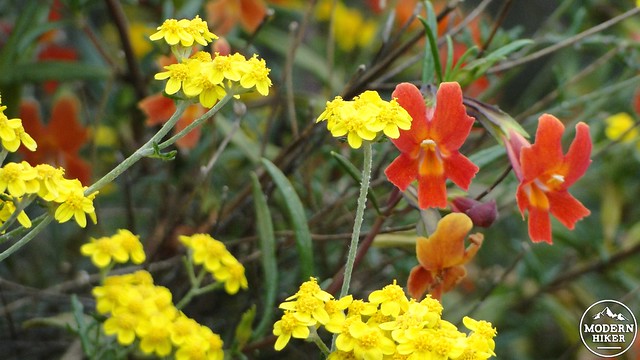 Cowles and Pyles Peak are contained within Mission Trails Regional Park, which is a 5,800 acre open space preserve that is also the 6th largest municipally-owned park in the United States and the largest in Southern California. Similar to Los Angeles’ Griffith Park and San Francisco’s Golden Gate Park, Mission Trails attracts countless hikers from all over metropolitan San Diego, and it is the most accessible and visited urban oasis in the county. The park, established in 1974, contains over 40 miles of trails and includes rugged canyons, peaks, riparian ecosystems, and a section of the San Diego River. 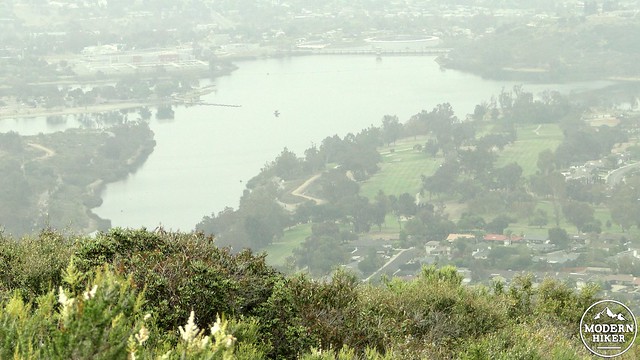 The area has a rich Native American history, which is reflected in the name for nearby Kwaay Paay Peak and numerous exhibits in a separate part of the park detailed Kumeyaay life. Cowles gets its name form a more recent San Diego resident named George Cowles, who was a New England rancher who settled in El Cajon. His name is now affixed to the highest point in the city of San Diego. Before the Cowles moniker stuck, the mountain was also known as “S” Mountain. That name originated from a large “S” painted by a number of SDSU students in the early 1930’s. Over the years, there have been numerous attempts to restore the “S,” but as Cowles is now in a protected area, the “S” has met a sad and ignominious demise. 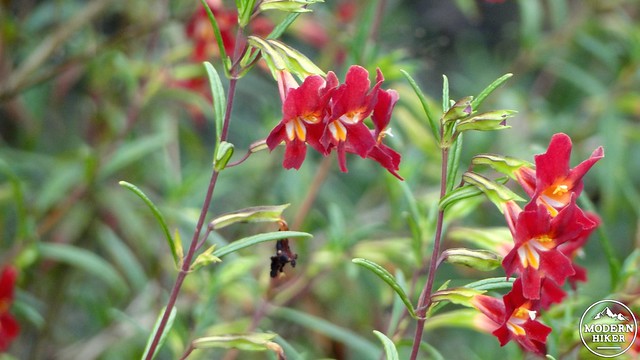 Starting from your parking spot at Big Rock Road, walk south toward the trailhead and step onto the narrow but well-maintained trail. Immediately, the trail will enter a thick elfin forest of chaparral that includes chamise, sagebrush, laurel sumac, mission manzanita, ceanothus, and scrub oak. Should you come during the period between March to May (and possibly early June if it has been a good rain year), many of these plants, as well as some less conspicuous ones like bush monkeyflower and yucca, will provide a vivid show. Chaparral usually doesn’t get the same love that forests and rivers do, owing to its monochromatic dark greens, scratchy branches, and absence of abundant water sources, but the vivid colors and rich scents in the Spring make this a wonderful wildflower hike. 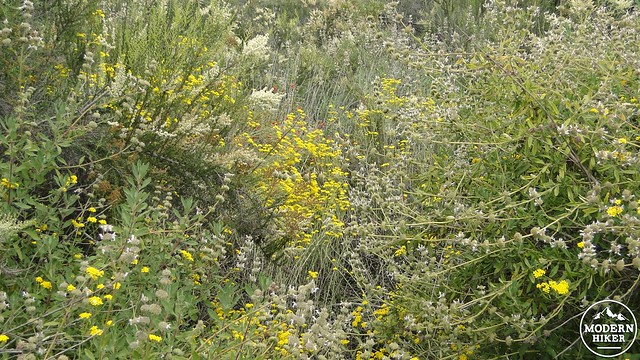 Almost from the onset, the trail begins a steep climb toward the summit of Cowles Mountain. Occasionally, the trail will dip in and out of dry ravines and occasionally pass a few scraggly oak trees. A view east and north will open up as you accumulate some elevation gain, although the skies are frequently socked in with marine layer. If the air is clear, the east county landscape will begin to unfurl, revealing views of Cuyamaca, El Cajon Mountain, Iron Mountain, Mt. Woodson, and the crumpled canyonlands of the San Diego River Gorge.

Just past the 1 mile point, the trail will come to  a T-junction with a fire road. Turn right on this fire road and enjoy nearly half a mile of relatively flat walking. This is your reward for the 800 feet you just picked up during the initial mile. At about 1.25 miles, you’ll pass a side trail branching off on the left. This is the south approach to Cowles Mountain, and it will lead you back downhill. Ignore it, and instead continue straight on. Cowles Mountain will be in view at this point, as will the moderately graded switchbacks that will lead to the summit.

People on the summit of Cowles Mountain

The switchbacks start around 1.4 miles, and the next .5 miles will wind gently upward until reaching the well-worn bald patch at the summit. This is where you are most likely to see the most people. You have the option of calling it a day here, giving you a 4 mile roundtrip hike with an honest 1,200′ feet of climbing. This is longer than the ever-popular south route, but the gain is more evenly distributed, making the climb a bit more pleasant. Should you decide that you want to keep hiking or that you want to enjoy a less crowded summit, follow the trail past the summit and bear right. Avoid turning left toward the south approach trail.

The trail to Pyles Peak, with Pyles Peak in the left portion of the frame

Almost immediately, the crowds should thin out, and you should find yourself traversing a broad ridge away from Cowles and over toward shorter, but equally viewful Pyles Peak. The trail will drop a few hundred feet from Cowles’ summit before making a gentle “roller-coaster” along the ridge. The views, if the weather permits, are a bit more open to the north along this stretch, and you’ll begin to get a better view of the north end of Mission Trails, including Kwaay Paay, South Fortuna, and North Fortuna peaks. 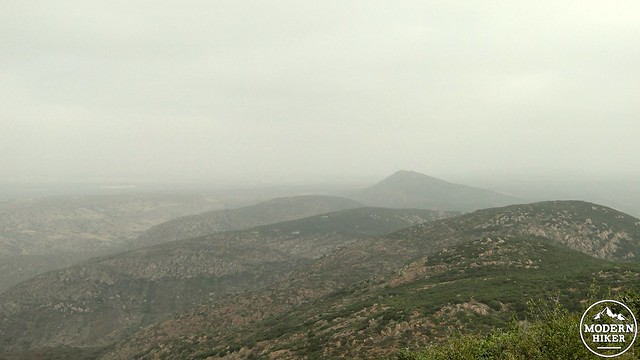 Looking north from Pyles Peak on a cloudy day

After a little over a mile, you will reach the summit of Pyles Peak, which offers nearly identical views over San Diego (excluding Lake Murray in La Mesa), and has a small fraction of the people you’ll find on Cowles. The trail will make a loop around the broad summit, allowing you to soak in the same kind of 360 degree views available on Cowles, which includes the coast, the east county mountains mentioned earlier, and some of the north county fixtures like Black Mountain, Palomar Mountain, and Double Peak. After you’ve enjoyed your time on Pyles, simply retrace your route back to Cowles, avoiding the right turn down the hill to Navajo Road. From Cowles, follow the fire road down the switchbacks and turn left onto the trail that will take you back to your car at Big Rock Road.

Note: It’s possible to take the Green Line trolley from San Diego to Santee and then transfer onto bus line 834 to Mesa Rd. and Prospect Ave. From there, it’s a .7 mile walk to Big Rock Road across Big Rock Park (where there’s also an alternate trailhead that joins near the fire road), along Arlette Street, and then left onto Big Road Road. 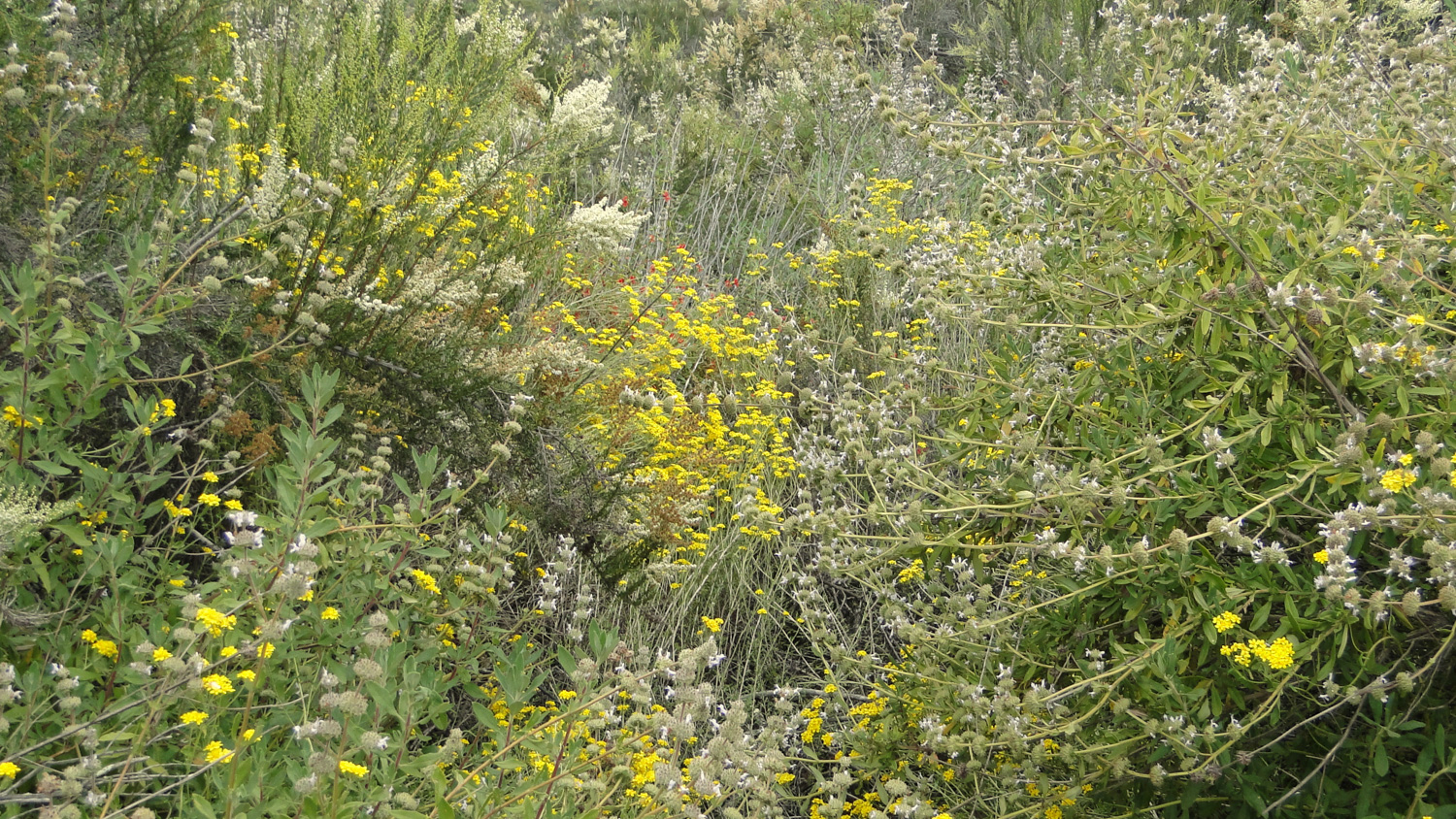 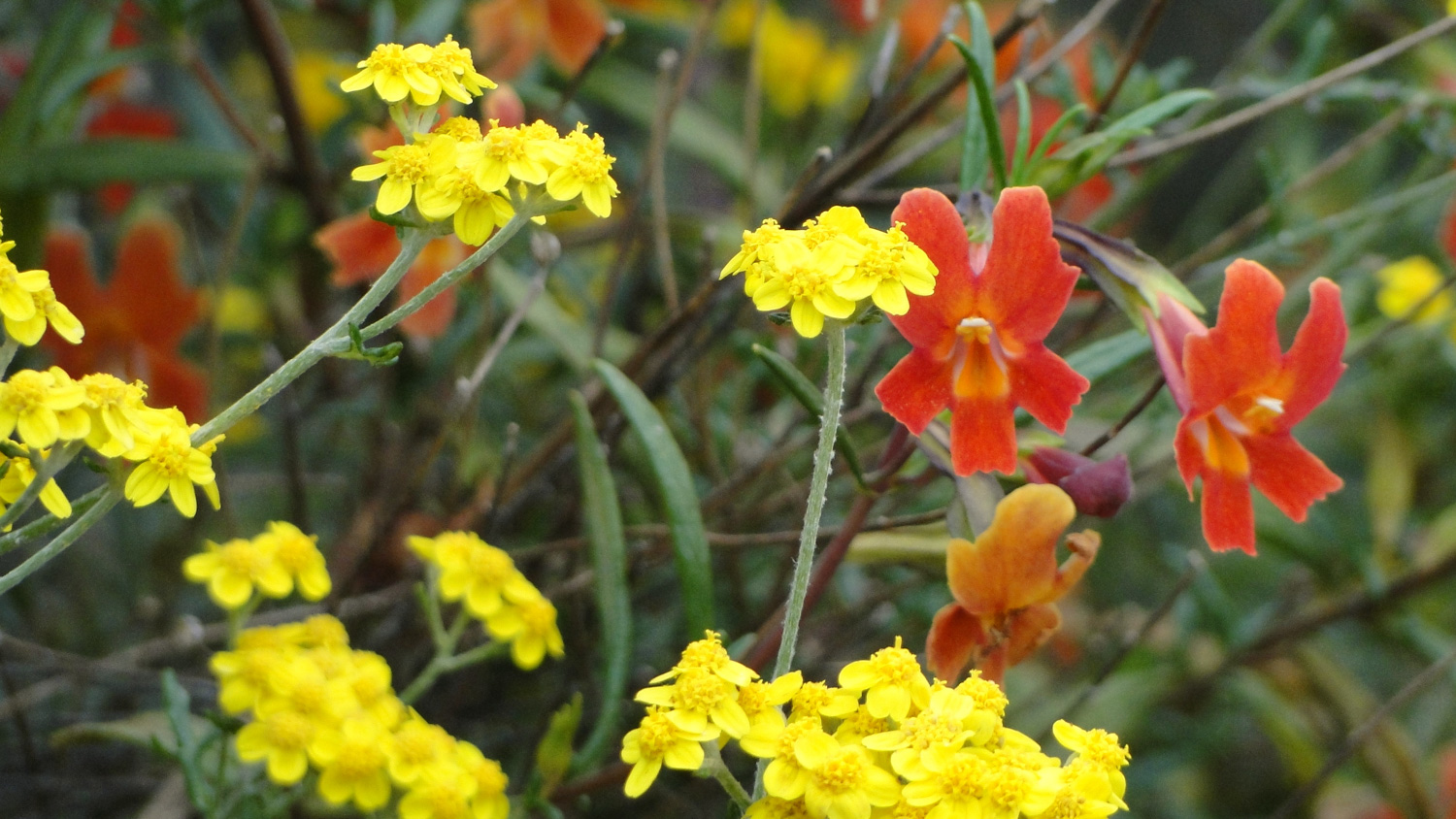 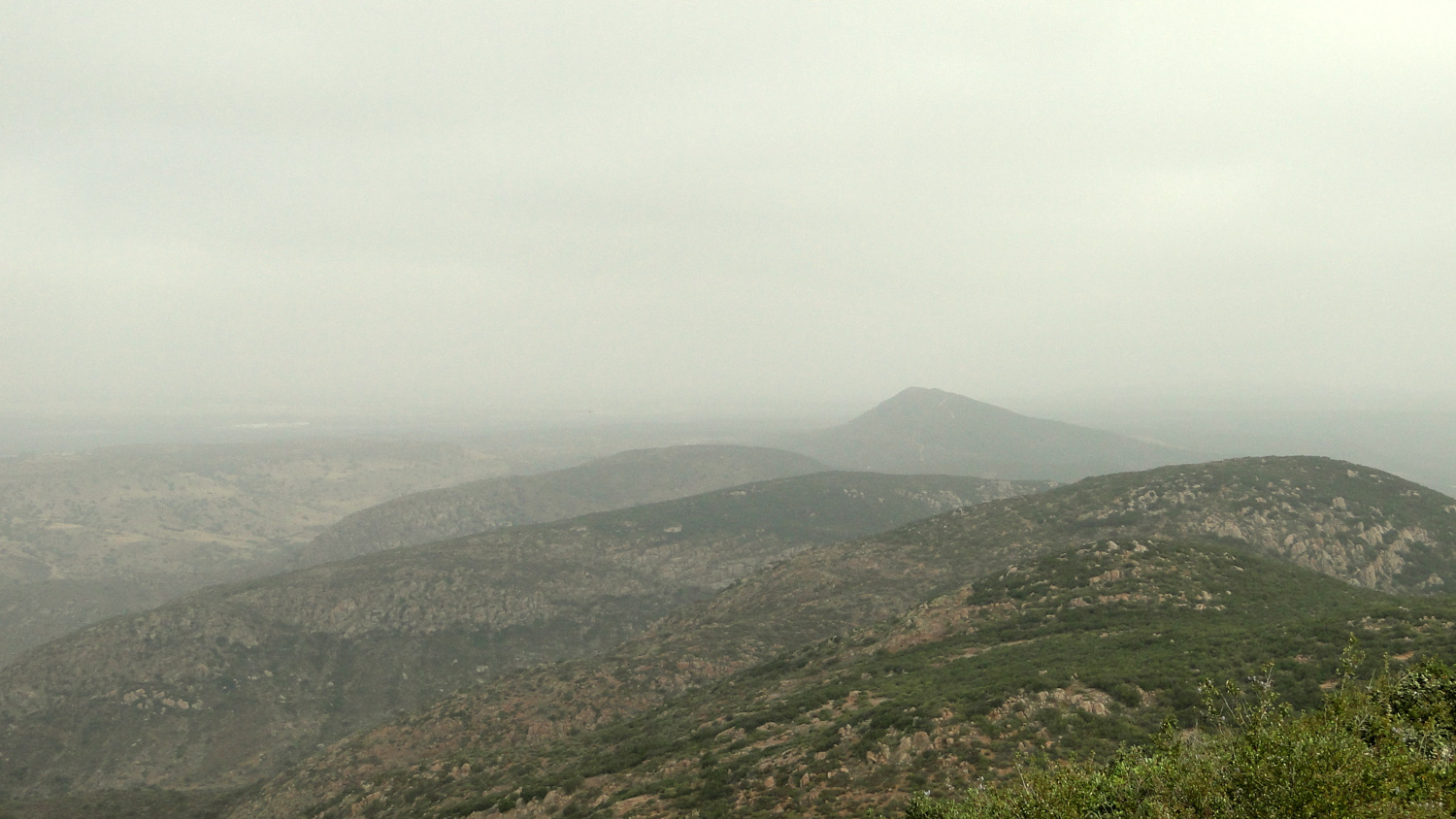 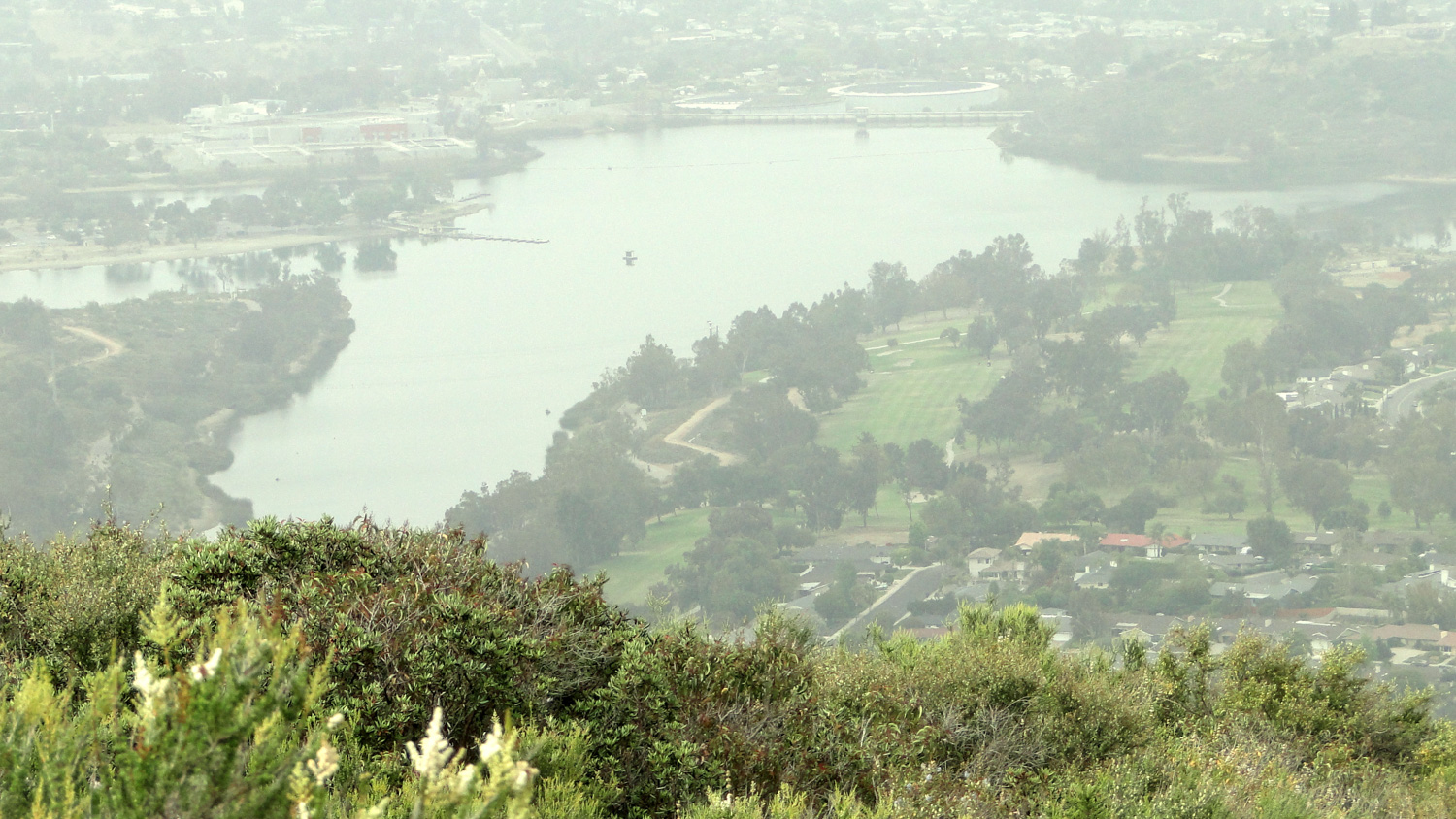 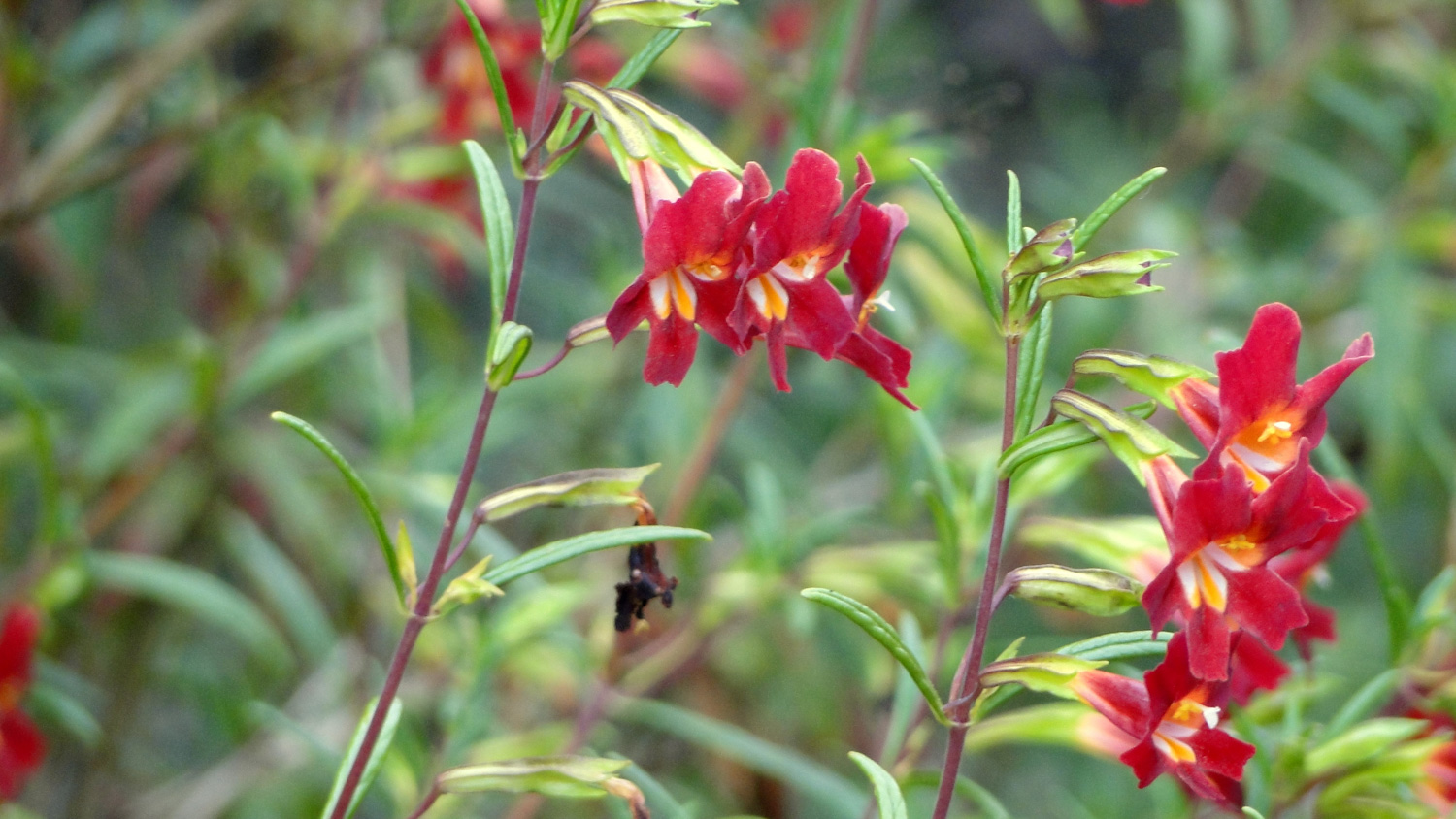 The trail can get a bit overgrown on the initial stretch before the fire road, but after that the trail is well-traveled and maintained.

The nearest camping is at the Kumeyaay Lake Campground in Mission Trails Regional Park. I've never been to this campground, so I don't have much to say for it. However, it is a location very convenient to the city if you're looking for a quick getaway with access to a lot of great trails, including Kwaay Paay Peak, South and North Fortuna, and the rest of the network near the Mission Trails visitor center.