Way out past Ramona in the San Diego County Estates neighborhood lies the Mt. Gower Open Space Preserve. This 1574 acre park preserves a chunk of the San Diego backcountry in a nearly pristine state, while offering some moderate to challenging hiking and peakbagging. The highlight of the preserve is a cluster of three summits, one of which is dubbed Mt. Gower. While the summits actually lie on Cleveland National Forest Land, the preserve is the best way to reach the peaks, which are accessible by some fun scrambling over large granite slabs. 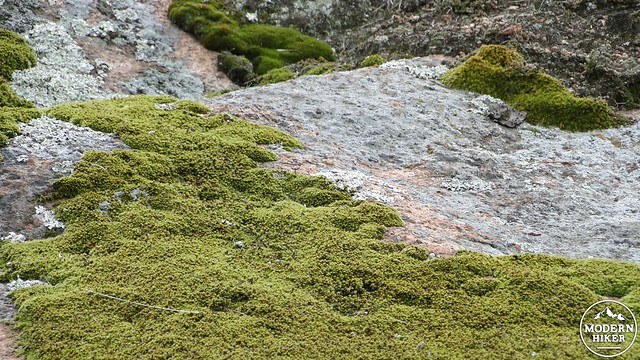 Aside from the peak, the main highlight of this trip is the large concentration of unusual rock formations at the upper elevations of the trail. Like most inland mountains, Mt. Gower features a large number of granite boulders. These boulders formed below the surface many millions of years ago, but as the land was uplifted and as the overlying soil eroded, the boulders became exposed. Years of weathering have sculpted the boulders into rounded forms, although many of Mt. Gower’s boulders take on more fantastic shapes. For instance, there is one set of boulders that look a bit like fangs, and there’s also Teepee Rock, which is formed by two separate rocks propped against each other. And, of course, there are numerous huge granite slabs near the summit that recall some of the larger slabs in sunny sections of the Sierra Nevada forest. 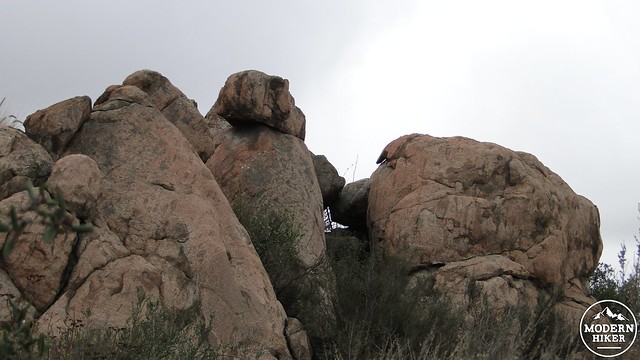 The trail starts out from the trailhead at the end of Gunn Stage Road. The initial stretch climbs across a chaparral-studded slope to a T-junction with the main preserve trail. The trail leading off to the left travels to a view point on the west end of the preserve. The trail you want goes right and heads toward the summit, as well as to two other optional viewpoints from which to enjoy the scenery. The first viewpoint is a good option to turn back for those who are not interested in going all the way to the summit. 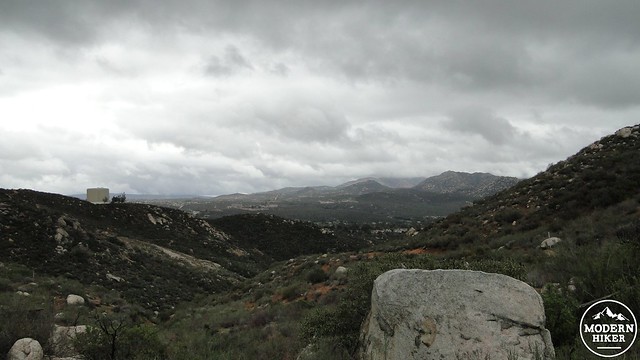 The trail will continue to undulate with a decidedly uphill trend until it bears right at a ridge. This ridge is the western wall of Swartz Canyon, which the trail will soon drop into and then back out of to ascend Swartz’s east face. Before dropping into Swartz Canyon, you will encounter a side trail that leads off to the first viewpoint. It’s a short, moderate scramble to the viewpoint, and there should be a bench there to welcome you and offer you a rest. From here, you’ll get a truncated version of the view from the peak, and the scenery is mostly dominated by the sprawling, semi-rural communities of Ramona and San Diego County Estates. The Mt. Woodson/Iron Mountain complex is visible off to the west, as is rugged El Cajon Mountain. 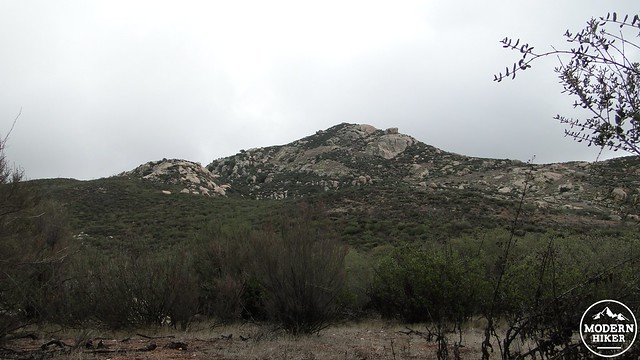 After you’ve taken in the first viewpoint, backtrack to the main trail and begin descending into Swartz Canyon. The intermittent stream at the bottom of the canyon supports a nice riparian habitat with willows, live oaks, sycamores, Engelmann oaks, and, if memory serves, a handful of cottonwoods. Keep your eyes peeled though, because trees and riparian areas usually mean poison oak when you’re below 5,000′. There is poison oak here, but early spring will often also bring wild cucumber and other wildflowers. So look – but to be safe, don’t touch. 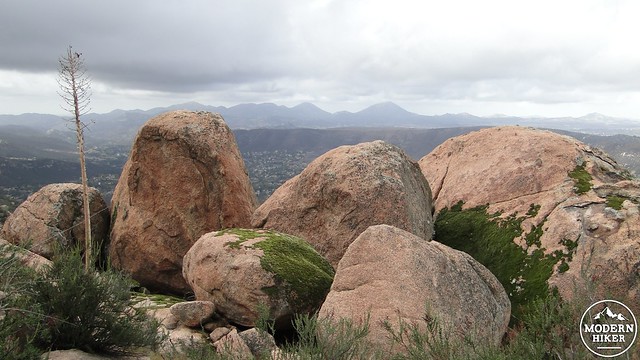 The next stage of the trail includes a steep climb up switchbacks to the eastern rim of Swartz Canyon. When the trail gains the top of the ridge, it will pass a water tower and continue to climb in a northeastern direction toward the summit. This section of the trail travels along a ridge that offers pleasant views back toward the trailhead and San Diego County Estates while also passing through some healthy chaparral that puts on a good flower show in the spring. 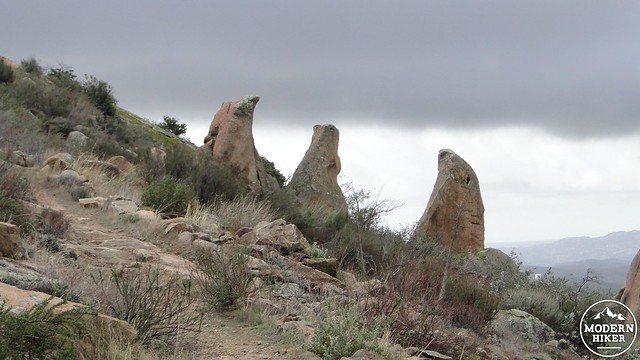 After taking a left-trending bend at a grassy meadow with a use trail leading off to the left in the direction of some oaks, you’ll begin to encounter some of the earlier-mentioned granite boulders. As the trail continues to climb up the shoulder of the slope, the boulders become more and more fantastic. Some of the boulders are jagged and rugged, while other granite outcrops are smooth, moss-covered slabs. The view of this granitic wilderness is quite pleasant after several long miles of chaparral. Seeing the slabs indicates proximity to the summit and means that it’s time to go off trail. 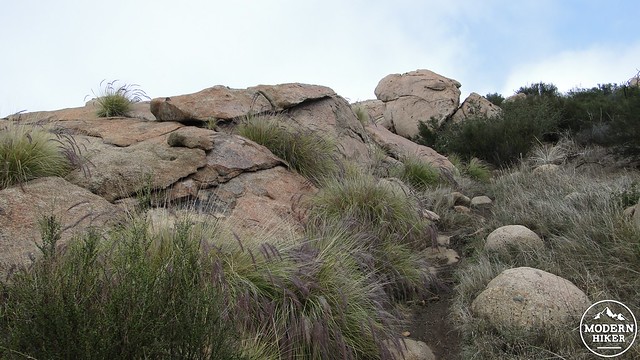 You’ll see a use trail climbing off to the left. Follow it. This use trail will lead up to the largest slab you’ll encounter, which is a huge flat space with great views west and south toward the San Diego River Gorge. If you come here after a rain storm, you’ll see a lot of the depressions in this huge slab filled up with water, creating a number of shallow pools. The use trail continues nearly due east over some jumbled and crumpled slabs filled in with mosses, shrubs, and grasses. Occasionally, you’ll see the semblance of a trail, but at other times, you’ll either need to follow the GPS track or use your discretion to determine the most reasonable route up the slope. I think the GPS track does a good job of finding a reasonable route up, so I recommend following it if possible. 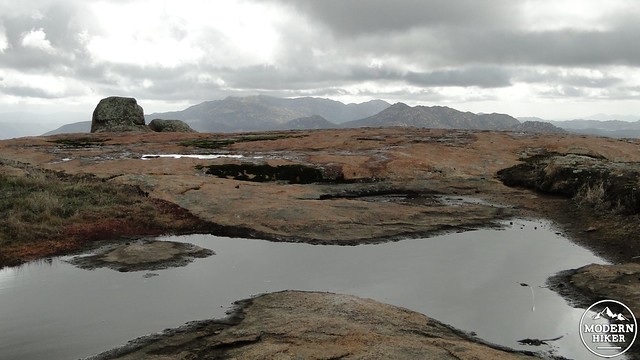 I’d love to be able to tell you what you’ll see from the summit, but as I hiked this immediately following a January rainstorm, I am not 100% certain what is visible. I can tell you that there are three peaklets, and the peaklet that this leads to is not the one labeled “Mt. Gower” on the topos. Due to low visibility, I was unable to locate that, and did not wish to lose my bearings in the fog. However, I can tell you that you are likely to see Iron Mountain, Mt. Woodson, Cuyamaca Peak, the San Diego River Gorge, El Cajon Mountain, and possibly some of the other peaks in the area, such as Ramona’s Black Mountain, Rodriguez and Paradise Mountain, the Palomar Range, and the Volcan Mountains. 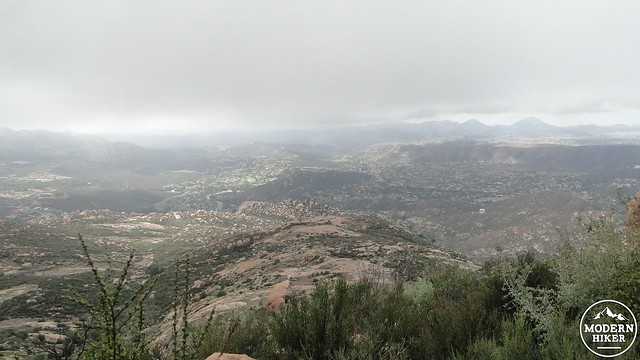 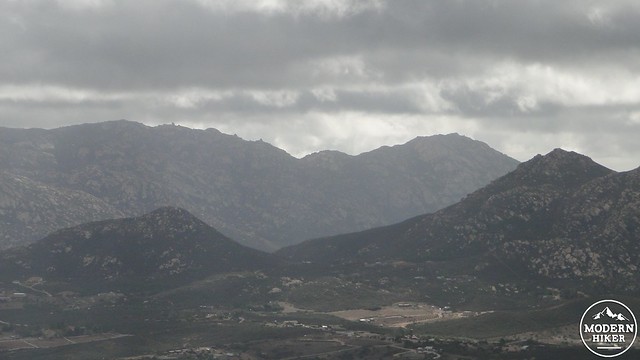 Once you’ve soaked in the scenery, you will retrace your way back the way you came. As mentioned earlier, finding your way back down the peak can be a real challenge due to the absence of any recognizable trail. This is why I recommend looking back frequently to keep a good mental image of what trail looks like on the return. A wrong turn could lead down other use trails that will wind off on what will become unnecessarily long diversions. I again recommend following the GPS track if you feel any discomfort about going off trail. Other than that, it’s a simple matter of retracing your steps down the mountain, back down and back up Swartz Canyon, and then back around to the trailhead. 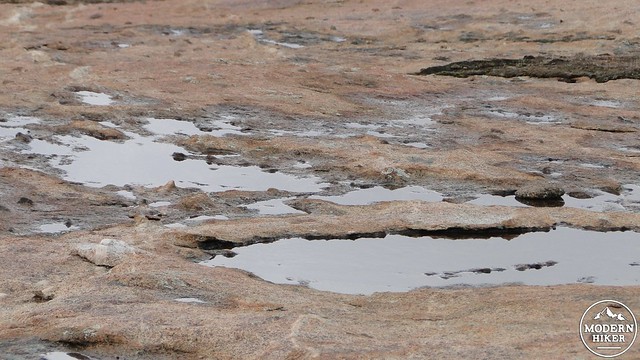 For the first 3.5 miles, the trail is relatively smooth and easy to follow, with the main challenges coming from occasional rocky sections and a few steep grades.

From either north or south, follow Highway 78 past Escondido, past the Safari Park and into the town of Ramona. At the junction with Highway 67, Highway 78 will turn left, while a new road called San Vicente Road continues straight ahead. Go straight and follow San Vicente Road, bearing left when it splits off to Wildcat Canyon Road. Turn left onto Gunn Stage Road, and follow that until the road dead ends at the parking lot for the trailhead.

Serious trail work was completed on the first 2.5 miles in May and June. All the deep ruts and slippery dg ridges were smoothed out and the encroaching Ceanothus was cut back from the trail. The Open Space is closed in August, but I recommend it when the weather is cooler! Great views and cool granite formations.

Great Trail. Just Hiked it today. Had a run in with a very large rattlesnake. I love that there is water access for animals.

[…] Mountain: Any one of the peaks east of I-15, including Mt. Gower, Woodson Mountain, Cowles Mountain, the Fortuna Mountains, and Stanley Peak will provide […]