Sandstone Peak is an easy hike for ‘intermediate beginners’ and novice hikers looking for a challenge. Great scenery, well-maintained trails, and lots of opportunities to branch out and explore. This is definitely one of my favorite trails in all of Los Angeles, and a fantastic way to introduce non-hikers to the joys of hiking.  This route to Sandstone Peak features a wide variety of landscapes, relatively easy elevation gain, and ample opportunities to explore side-trails. 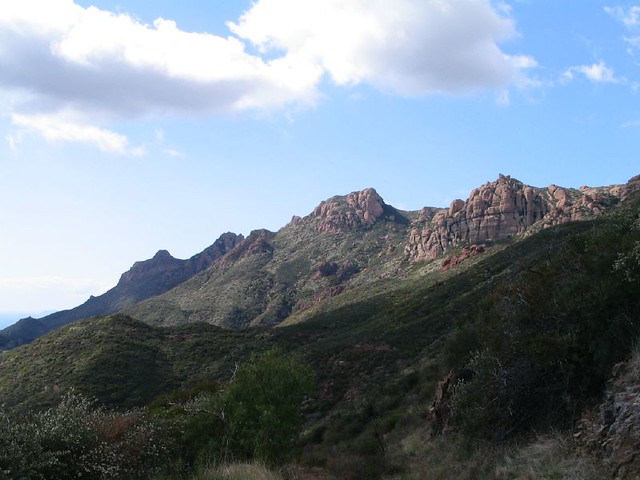 This trail is challenging without being impossible, solitary without being desolate, and with views, landmarks, and smells that will lodge in your brain and keep calling you back. In other words, it’s the perfect hike for the hiker who doesn’t know they’re a hiker yet.

The Mishe Mokwa Trail to Sandstone Peak is that rare trail that you can do over and over again and never get tired of. Depending on the season, the weather conditions, and the time of day, this trail will highlight new and different aspects of a route that has a little something for everyone.

Sandstone Peak, the highest point in the Santa Monica Mountains (3,111 ft), can be reached from the main trailhead described here with a short 3 mile out-and-back (an alternate spillover lot can be reached just down the road) — but it is an infinitely more rewarding hiking experience to take the longer 6.1 mile loop along the Mishe Mokwa Trail.

Also, if you’re doing this as a loop trail, the elevation gain is much less noticeable for most of the trip. Unfortunately, the first 0.4 mile is one of those noticeable areas. Keep right at the junction at 0.3 miles and in another tenth of a mile that incline section will be over. Now, you’re headed east on the Backbone Trail with some beautiful views to the east. 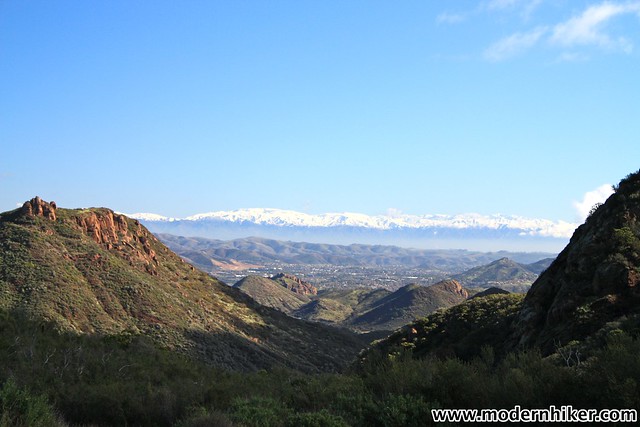 At the half-mile mark, the Backbone Trail takes a sharp right, descending to the overflow parking area and (eventually) all the way to Will Rogers State Park. Stay to the left to begin your trek on the Mishe Mokwa Trail.

The hiking here on the southern stretch of the loop is mostly through low coastal sage scrub and is very open to the sun. If you’re attempting this route in the summer or fall, you’ll want to get a nice, early start to avoid overheating. This area is especially nice right after a rain storm, as the California sagebrush, bay laurel, and other fragrant natives really come alive. 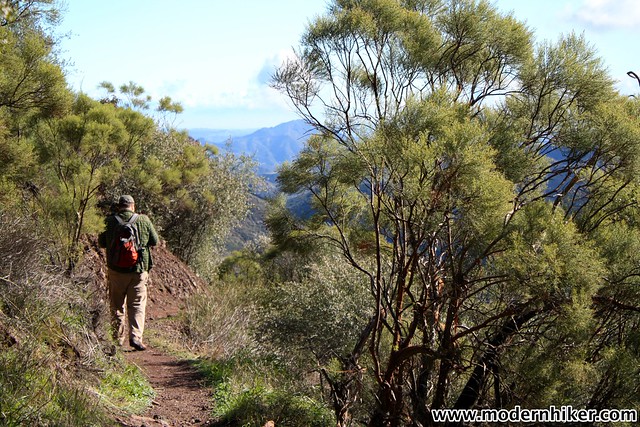 Just before the 1 mile mark, the trail begins to climb again just as it makes a turn westward. To the east, you’ll see a deep and rugged wall of Carlisle Canyon that will eventually lead you back into civilization. To the north, the Echo Cliffs are often crawling with climbers and scramblers while the massive Balanced Rock hangs perilously overhead. 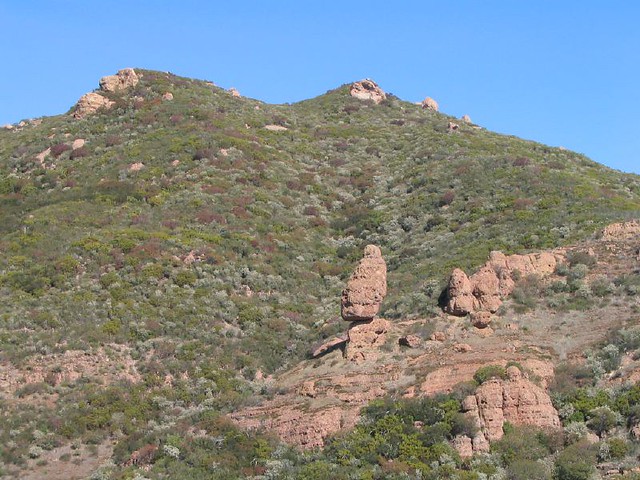 The trail continues on the southern lip of the canyon and at 1.8 miles you’ll hop a seasonal stream near a shaded riparian grove with a picnic table and a large boulder split in half called–creatively enough–Split Rock. It’s a popular tradition for Boy Scouts to walk through the crack when they get to this part of the trail, but no one’s going to stop you if you aren’t wearing a neckerchief. 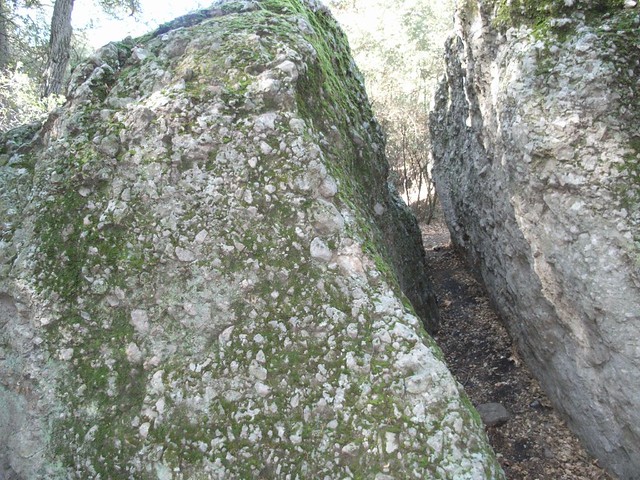 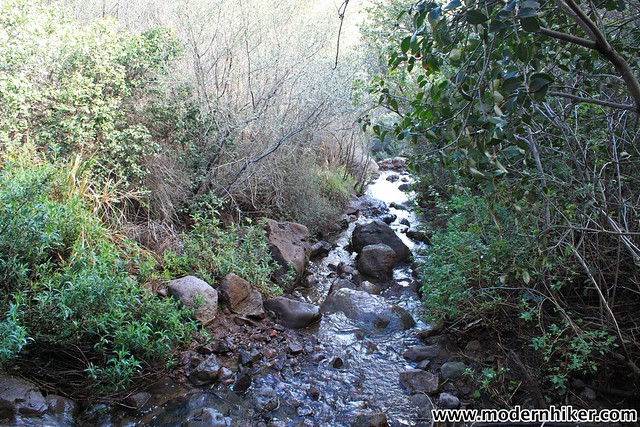 Just past the picnic area, there’s a short, unmaintained spur trail that will take you to the Echo Cliffs. Keep to the left at this junction to continue on the Mishe Mokwa as it makes a long, steady climb out of the canyon. Keep an eye out for more climbers on the nearby rock faces–and some soaring hawks in the air above them. 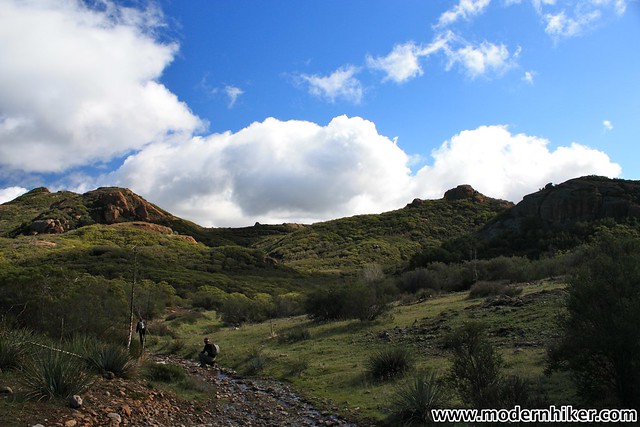 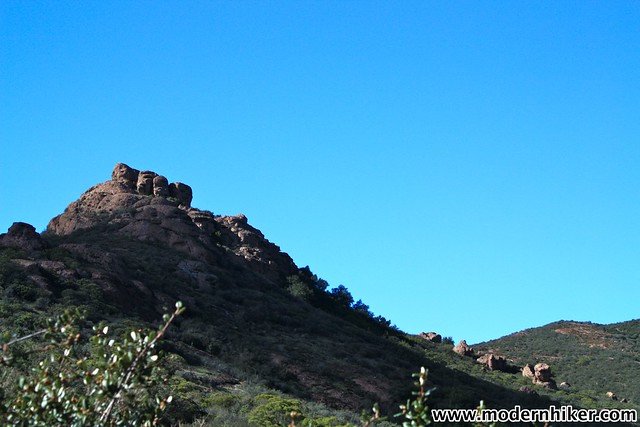 At the 2.9 mile mark, look out for a brushy use trail. If you’re interested in bushwhacking and a bit of scrambling, this can take you up to nearby Tri-Peaks (also reachable from a rugged trail from the north), a the second-tallest peak in the mountain range (3,010 ft) with some commanding views of Point Mugu State Park below it. For now, though, stay on the broader fire road of the Mishe Mokwa Trail.

At 3.2 miles, the trail reaches a slightly complicated junction after traveling in a (mostly) dry creek bed. For the purposes of this trip, just keep staying to the left. The trails that head west from here are the Chamberlain Trail/Backbone Trail, which will take you down into Point Mugu State Park and eventually to the Pacific Ocean.

At 3.4 miles, stay to the left again and ignore the short fire road near the water towers, which dead-ends on the north flank of Exchange Peak (2,950 ft), the third-tallest peak in the Santa Monica Mountains. 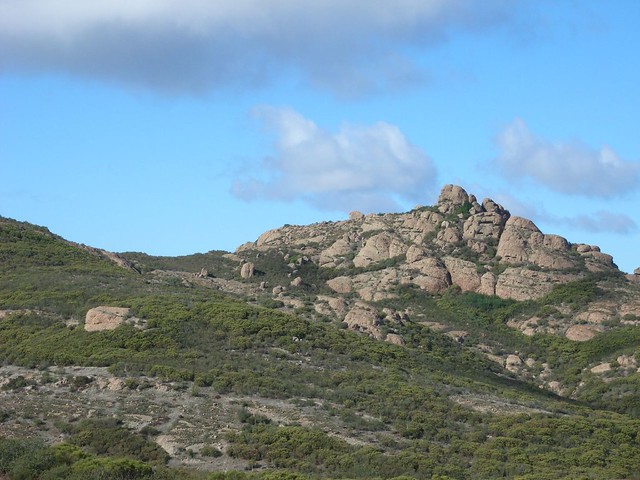 Here, the Pacific Ocean comes into view clearly for the first time on the loop and on most days the views are nothing short of stunning. For better vistas, keep hiking to the east, where a short spur trail at 3.5 miles will take you out onto the bare promontory of Inspiration Point, a small memorial to a Boy Scout perched on an exposed ledge. There are also some more nice opportunities for climbing along the way, although that first step is a bit too steep for my tastes. 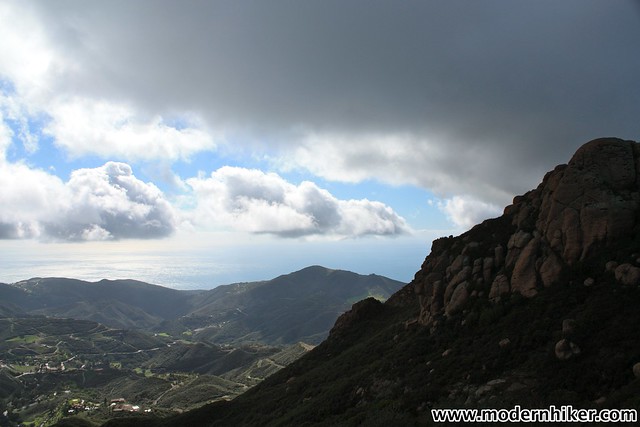 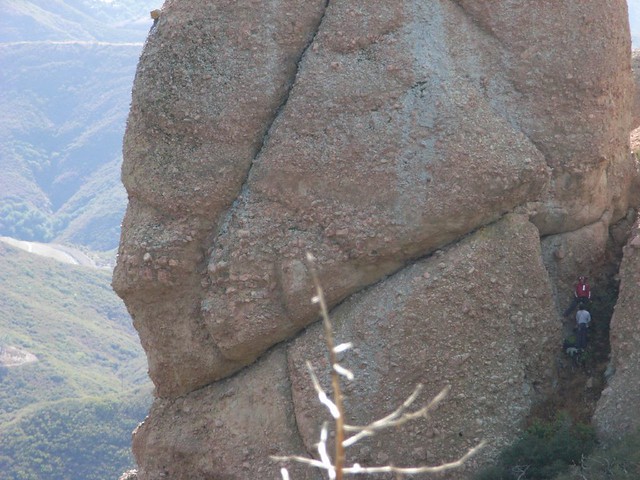 Return to the Backbone Trail and head east. The trail here meanders on the north side of the Boney Mountain Ridge and makes a relatively slow ascent.

At 4.5 miles, look for a wooden sign pointing you toward Sandstone Peak and climb up the stairs cut into the side of the mountain to begin your way up. The trail here is much more rugged than what you’ve been on so far, and the established route dissolves into a series of use trails, all of which eventually make their way to a barren rocky slope that you’ll have to scramble up to reach the summit.

It’s a challenge, but it’s completely doable. One of the times I hiked here, I watched a dad shepherd his two small daughters up the mountain with very little trouble. As I was the only other person in sight, the youngest daughter waved at me from above, yelling “Hello, hiker!”

Seriously, if a four year old can do it, you can, too. And when you get to the top, it will be worth it, as miles and miles of southern California mountains and coastline unfurl before you, beneath the watchful eyes of Mr. W. Herbert Allen, who donated many acres of land to the Boy Scouts–including nearby Circle X Ranch. The Scouts attempted to get Sandstone Peak renamed for Allen in the 1960s but the petition was denied due to a Department of Interior policy against naming geographic landmarks after people who were still alive. Nevertheless, the Scouts held an unofficial renaming ceremony in 1969 where they left a plaque for Mr. Allen. 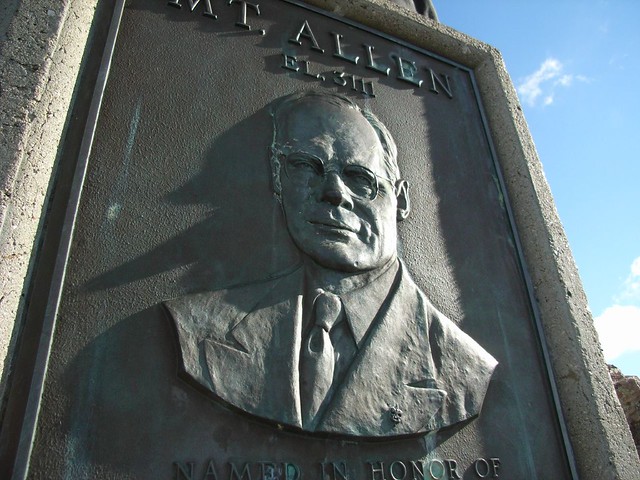 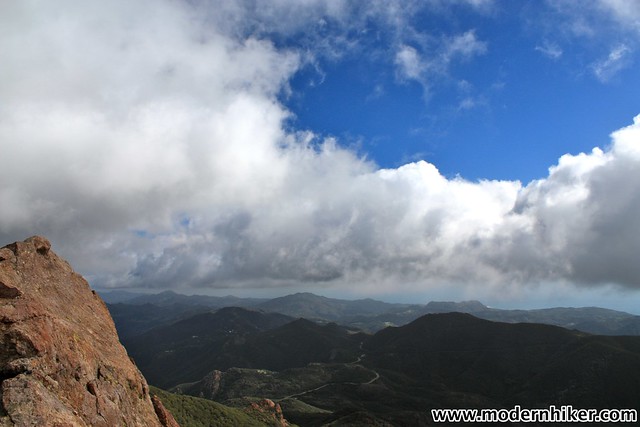 Make your way back down to the Backbone Trail, either the way you came in or via a more direct (but also more steep) scramble straight down. Take a right to continue east on the Backbone Trail as it makes a steep descent back toward the trailhead. As you head down, you’ll be happy you didn’t just climb up this way.

At 5.7 miles, take a right to head back to the trailhead.

Very good, and very easy to follow. If you branch off the Backbone or Mishe Mokwa Trails, however, you might need to brush up your navigating skills. Or at least keep your eyes peeled.

From Santa Monica, take the Pacific Coast Highway north for about 29 miles and take a right onto Yerba Buena Road. Continue east for 6.4 miles and a dirt parking area will be on the left side of the road, just after a sharp bend. If the trailhead is full, there is an overflow lot 0.6 mile to the east of the main lot with a connection to the Backbone Trail.

Beautiful hike but wasn't dog friendly for us. My lab who usually has no problems hiking was also having issues with his feet (as others have commented). I think they were getting burned in certain areas from the fire residue that was heating up under the sun. Ended up carrying him out.

I did this hike last weekend, counter clockwise, and was wiped out afterward - I had to carry my 70 lb. dog to our car once we were back at the trailhead. Anyone calling this an "EASY" hike is hardcore AF.

I kid. You'd need a headlamp, but I bet it would be outstanding during the full moon.

Does anyone know what this hiking area is like at night?

I did this hike on Sunday, August 13, 2017 with my friend Sanjeev Batra. I had landed the previous evening from Delhi (India) after a brief stopover in Europe. The trek was very exciting except that I got a sun-burn on my shoulders since I did the mistake of taking off my t-shirt without applying any creme. This trek will always remain a memorable experience for me since it was my maiden trek in USA and I being a novice. I have done hiking in the Himalayas a couple of times. Once at a place called Hatu near Shimla and another at Pahalgam near Srinagar. I look forward to another hike with Sanjeev very soon (India or US).

Thanks for the helpful write up and photos. Liked that one can reach the trail head and return to Orange County (or the Westside) without having to go through 21 miles of ugly weekend traffic in Malibu (arrived and left via Kanan and the 101). Had smooth sailing to OC starting at 3:40 PM from the trail head on a Sunday in mid-August. Sorry to say that lots of trail heads are not as well organized as this one - with a toilet that was not even stinky on a Sunday at noon! Parking areas were say 2/3 full. If meeting up with another car, might want to specify which of the 2 parking areas is to be the meeting point. PDF maps on-line make it pretty clear which is the trailside parking area versus the opposite from trailside parking area.

I love the Mishe Mokwa Loop, hiked it often when I lived in Thousand Oaks. I was always curious about the name and checked local Chumash stories looking for the meaning. I eventually discovered that it was from the song of Hiawatha, whose father was made chief after killing a monster bear, Mishe Mokwa, with a blow to the head...maybe like split rock.

This may be a dog friendly-ish trail, but I recommend careful consideration before committing. My good natured, 52 lb mixed breed suffered pad damage on all four of his feet. As indicated, the trail is very rocky, and many small sharp rocks over a six-mile stretch was too much.

This is dog friendly-ish trail. The trail itself is very rocky and can be a bit rough for paws.

There are! Backpacking in the Santa Monicas is a bit tougher just because there aren't as many walk-in backcountry campgrounds as there are in the San Gabriels, but there are a few walk-in sites just down the road in Point Mugu State Park. Check the Mugu Peak and La Jolla Canyon guides for more info.