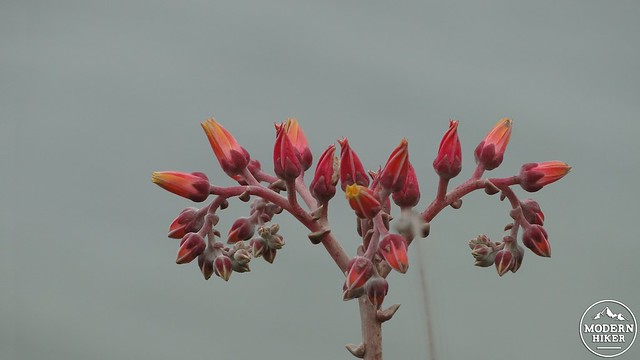 This area of San Diego is rich with historical significance, and the Bayside Trail hike has been expanded here to include the monument, the lighthouse, and an observation point popular with whale watchers. Cabrillo’s arrival in 1542 marked the first time that a European explorer set foot on the west coast of North America, thus paving the for the Spanish, Mexican, and United States’ habitation of the land now known as California. Additionally, Point Loma’s advantageous location encouraged the Navy to install a base, from which numerous historical buildings that were involved in the proposed defense of San Diego from invasion during World War II remain as part of the monument. And, finally, the Old Point Loma lighthouse, which was a beacon for ships entering often fogged-in San Diego harbor, remains well-preserved as a landmark to San Diego’s maritime history. 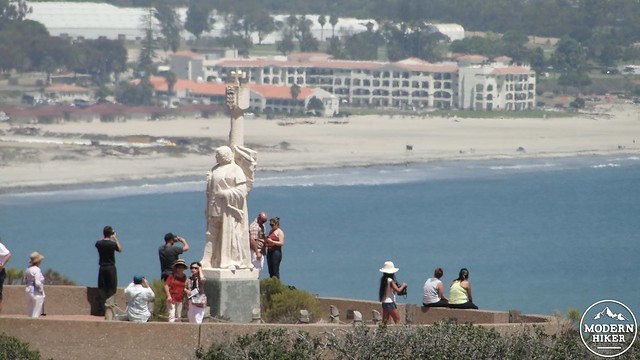 This hike visits all three components of Cabrillo’s rich history and includes the beautiful 2.2 mile bayside trail along the eastern tip of Point Loma. The hike begins by entering the Visitor Center complex, where you can view a film about Point Loma’s history, visit the actual Visitor’s Center, use any necessary facilities, and enjoy the famous views over downtown San Diego, Coronado, and San Diego Harbor from the Cabrillo Monument. This isn’t necessarily hiking as it occurs entirely on sidewalks, but it will allow you to catch all the highlights of this diminutive monument.

Panorama from the monument 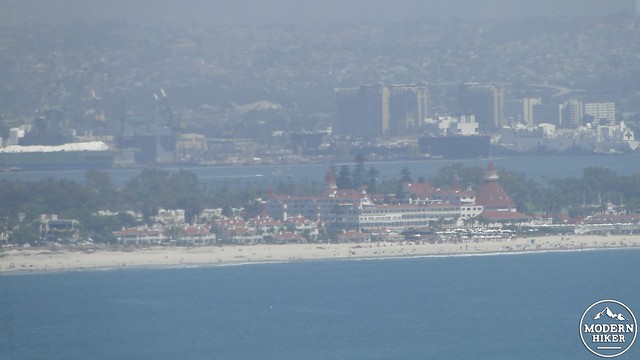 After visiting this complex, follow the sidewalk in the direction of the Old Point Loma lighthouse. This lighthouse was built in 1855 following California’s inclusion into the Union as part of a larger project that funded completion of lighthouses at numerous points along California’s coast. The lighthouse remained in continuous use until 1891, when a newer electric lighthouse was constructed at a lower elevation on Point Loma southernmost tip. The lighthouse fell into disrepair and became dilapidated until it was called back into service as a signal building (painted camouflage green) for ships entering San Diego Harbor during World War 2. You can enter the lighthouse and climb partway up to the tower, but a gate prevents entrance. 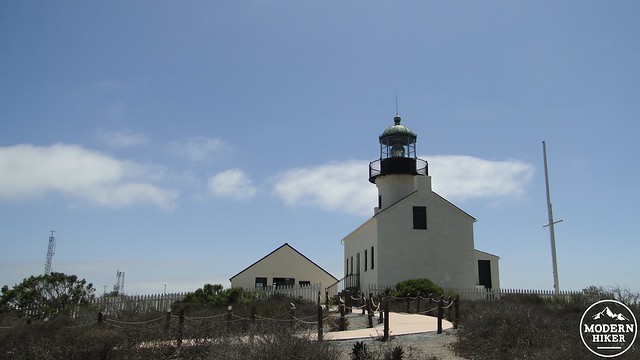 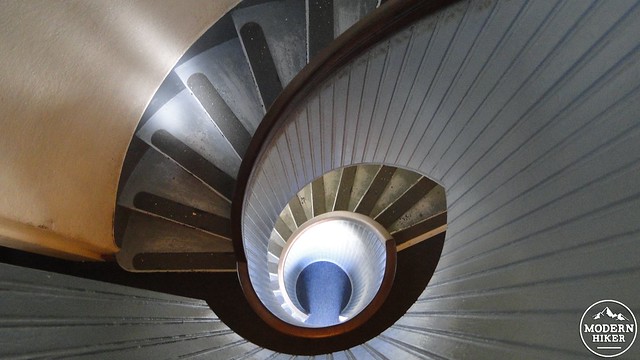 After leaving the lighthouse, this trip will next visit the whale viewing point, from which thousands of visitors watch the migration of California Grey Whales every year. The viewing point also offers informational panels provided by NOAA explaining the role of the kelp forests, the challenges posed by the Great Pacific Garbage Patch, and the effects of global warming. The views here are excellent, as they encompass the wide, blue expanse of the Pacific Ocean, as well as the tide pools below and the military base to the north.

Leave the viewpoint and double back toward the lighthouse where you will find the trailhead for the Bayside Trail. Trailhead is perhaps a bit misleading, as the first stretch of the trail occurs along an access road leading to a radar installation. After a half mile of asphalt, the real trail will bend hard left and begin its descent through coastal sage-scrub toward the ocean. Numerous trail signs describe the flora and fauna of the area, as well as the ecology of the now exceedingly rare coastal sage-scrub communities. In addition to its historical significance, Cabrillo National Monument also protects this disappearing environment in addition to the nearby tide pools. 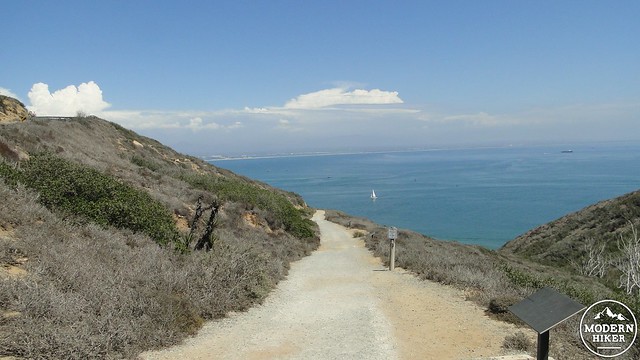 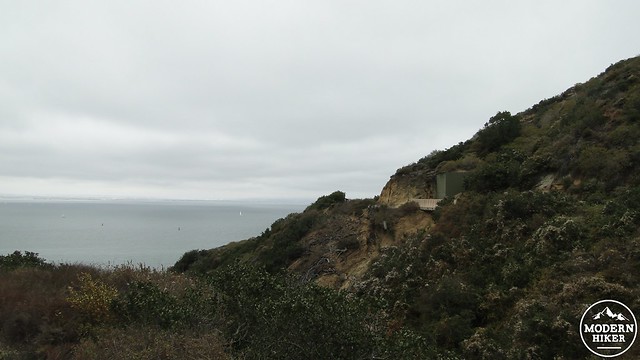 The trail begins a gentle descent over smooth surfaces. It’s important to remember that the Bayside Trail’s first stretch is almost entirely downhill, which means that you will be walking uphill on the way back. It’s not a particularly strenuous ascent, but it can be a little draining on a hot summer day. Should you be hiking in the heat, I recommend bringing adequate sun protection and fluids. Fortunately, the heavy influence of the marine layer throughout the year means that the Bayside Trail is almost always refreshingly cool. It also features a good wildflower display in the late winter to late spring months. 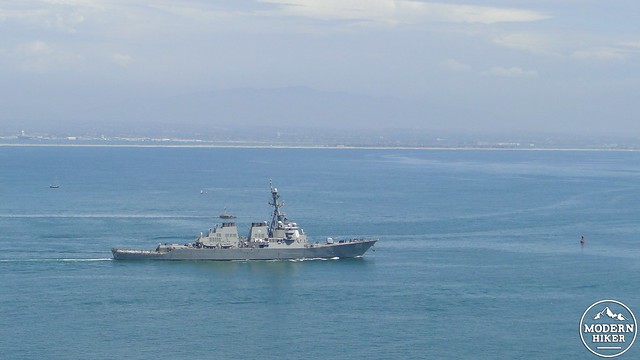 Frigate putting out to sea 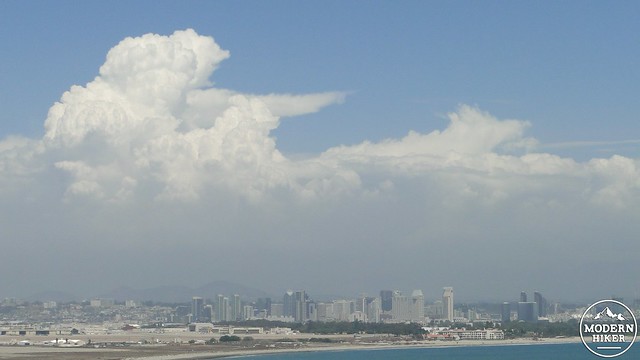 Thunderstorms pounding the mountains while downtown basks in the sun

The trail will also pass a few historic military buildings on the way down. One of the buildings was created to house a spotlight that was used to identify ships entering the harbor during World War 2. This searchlight would, in theory at least, spot enemy ships attempting to enter the harbor. A second structure was built nearby to house the generator that provided power to the light. Both structures were built into the rocks in a ravine alongside the trail to take advantage of the natural camouflage provided by the nearby scrub. 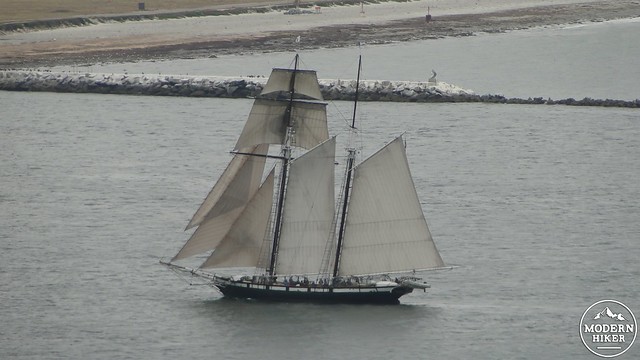 That’s one way to get around

Soon, the trail will come to a dead-end where you can go no further without entering private property. Along the way, you will have enjoyed great views of San Diego, Coronado, and San Diego Harbor. You will probably see numerous military aircraft, and perhaps a naval ship putting out to see or returning to harbor at San Diego’s naval bases. You will also likely see a lot of private boats and tourist boats enjoying the sunshine (or the fog) while being chorused by sea lions lounging around on the numerous buoys in the water lanes. This unique view is one of the best in San Diego, and on an exceptionally clear day, the views extend as far as the Cuyamaca, Volcan, and Palomar Mountains in the center of the county. 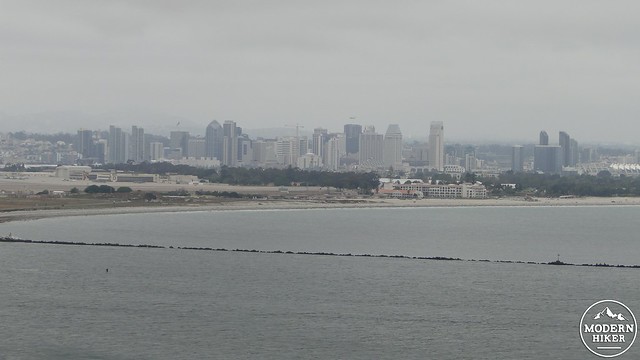 Downtown from the end of the Bayside Trail

After you have enjoyed the views, the visitor’s center, the lighthouse, and the monument, you will make your way back up the Bayside Trail back to the parking lot. If the tide is out, you can drive down to the nearby tide pools. Unfortunately, the tide was up when I documented this trail, so I was not able to visit them. For further information, please visit the National Park’s information page regarding life in the intertidal zone.

– Park hours are 9 am to 5 pm, and the Bayside Trail closes at 4pm.
– The road down to the tide pools closes periodically when the parking lots reach capacity.

Accommodations near The Bayside Trail 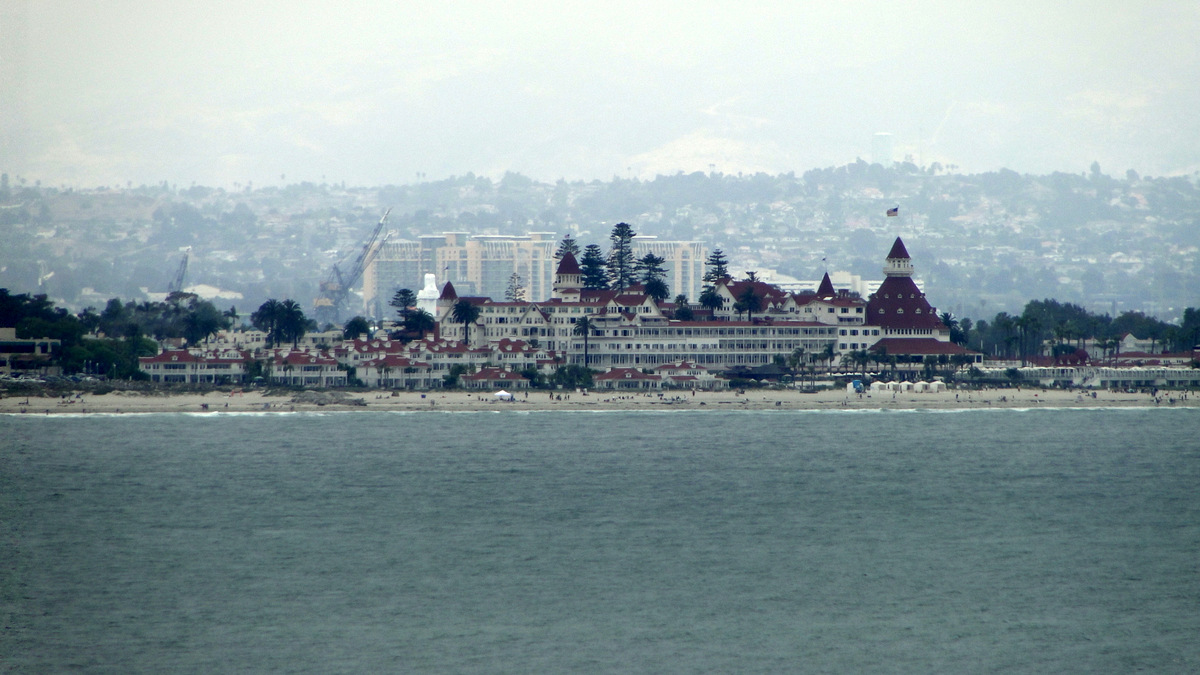 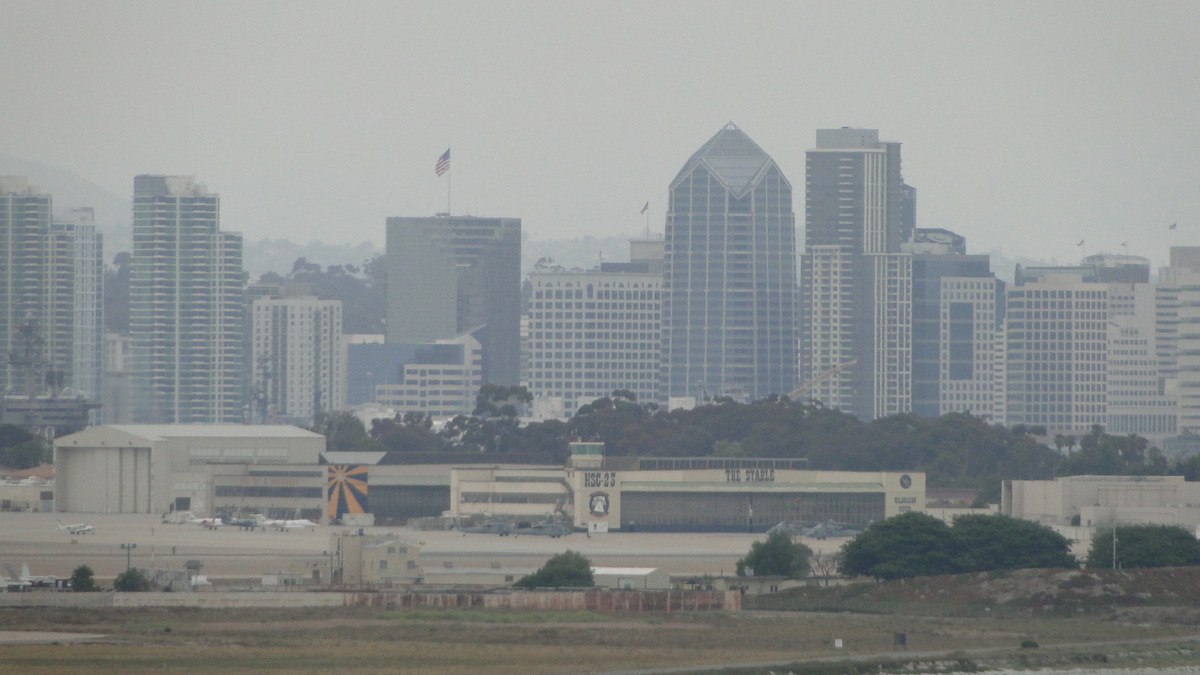 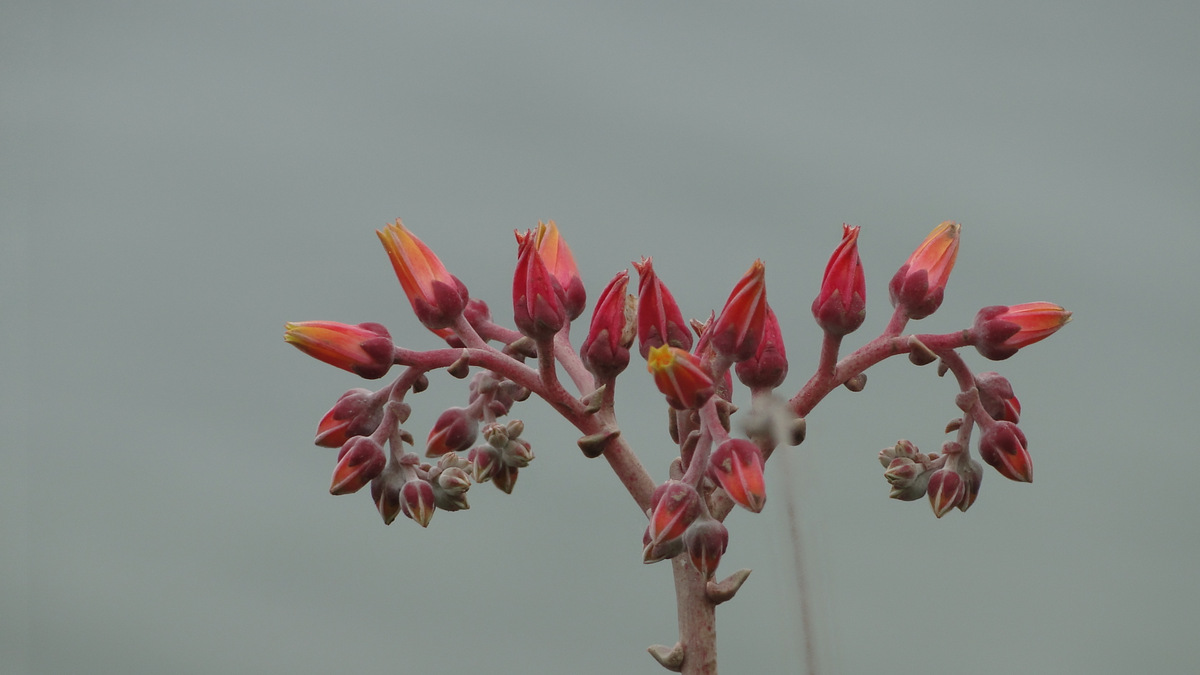 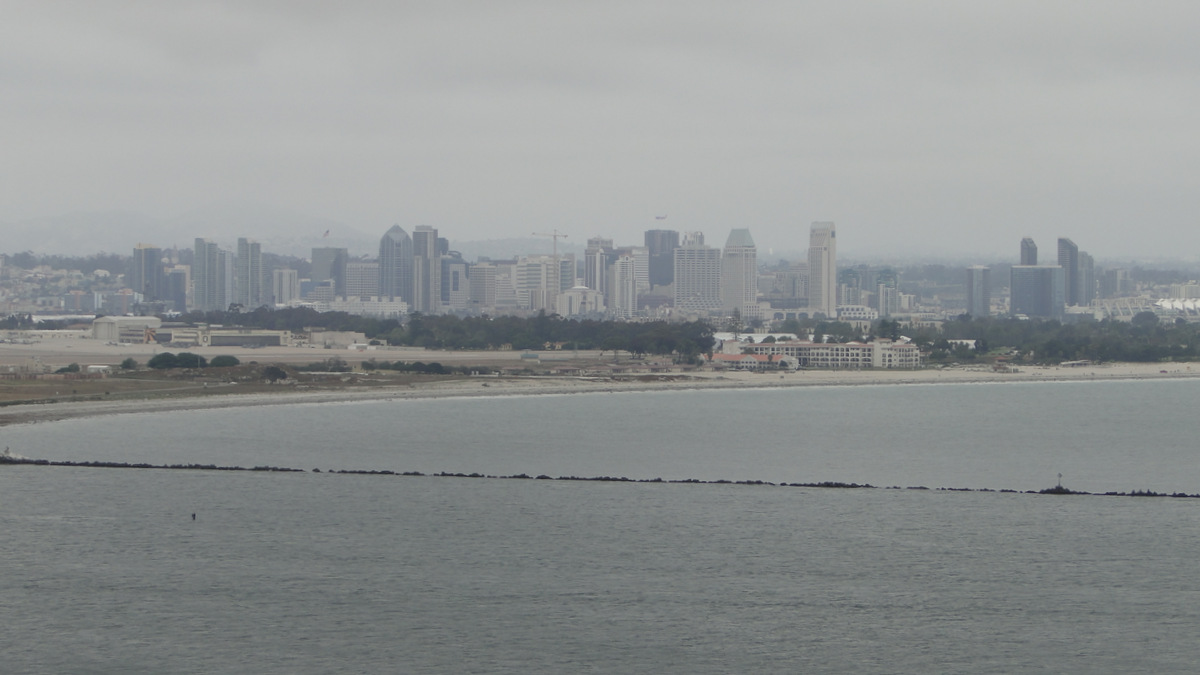 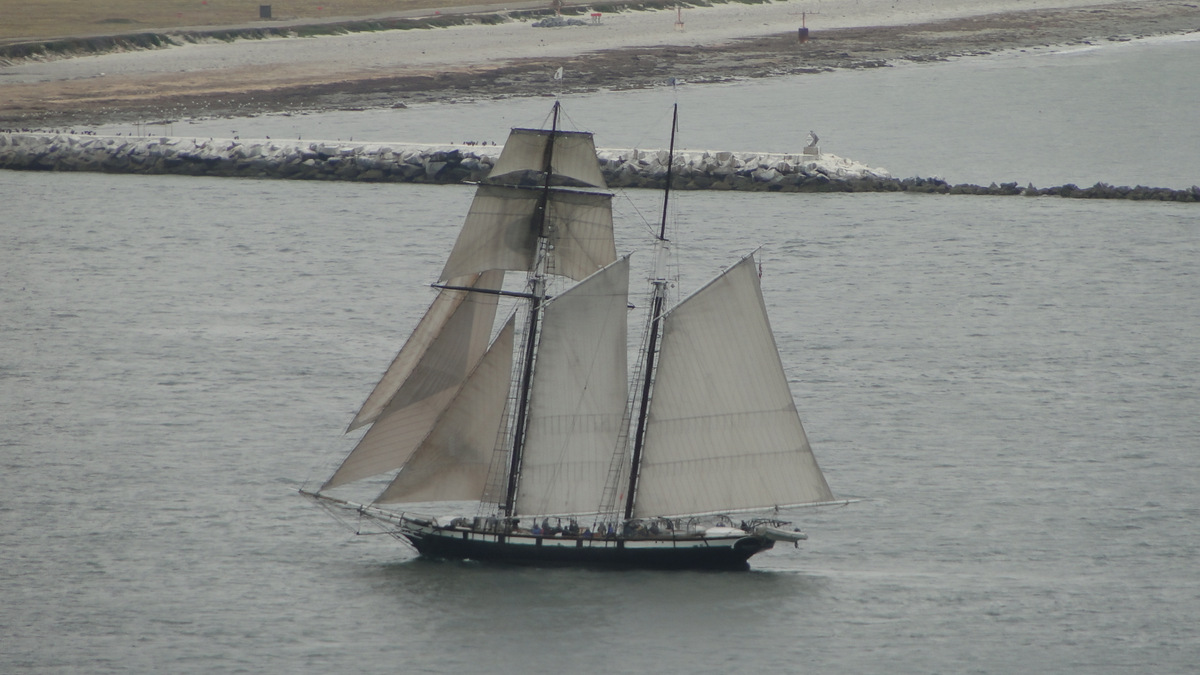 The trail is well-maintained and very easy to follow. A significant portion occurs on pavement.

From San Diego, follow Interstate 8 west toward the beach and exit at Nimitz Blvd, bearing left. Turn right onto Catalina Blvd. and follow it until it becomes Cabrillo Monument Drive. The road will terminate at the parking lot for the Monument.