Rising up from a spur ridge unfurling from the base of Black Mountain, the Indian Mountain massif stands aloof from the highlands of the San Jacinto Mountains. The mountain sits at a lower elevation (5,790′) from the rest of the range, which both makes Indian Mountain feel like a somewhat separate area while offering great views of the San Jacintos themselves. Lightly traveled, this hike is a great opportunity for winter hiking in an area that sees many of its best hikes buried in snow. 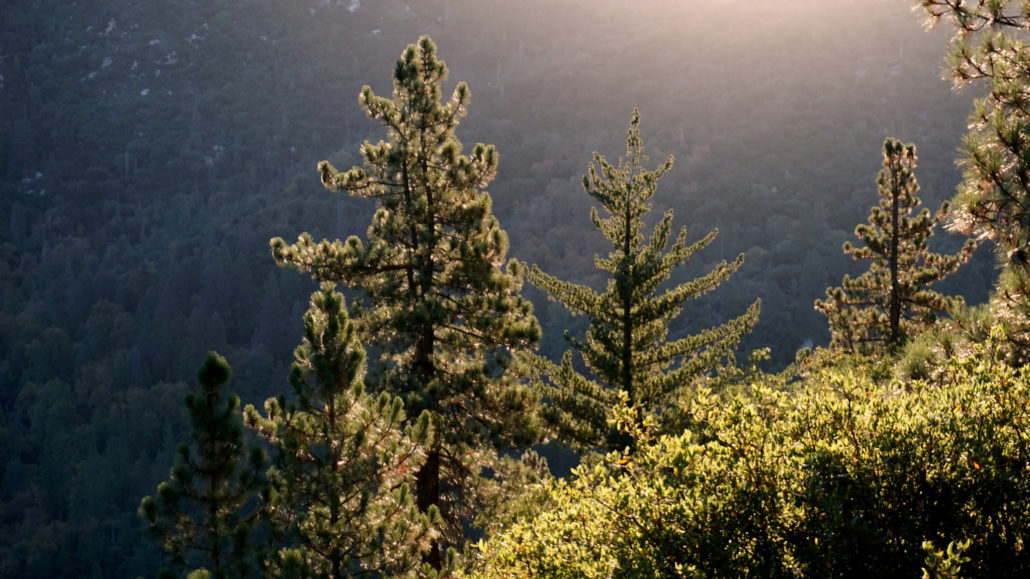 This route follows the Indian Mountain Truck Trail, an occasionally traveled OHV route that also functions as a multi-use hiking and mountain biking path. While you’re not likely to see a lot of hikers on the route, you my encounter off-road vehicles from time to time thus causing you to step off the road. Road traffic aside, you should be able to enjoy this hike and its splendid views in relative isolation. This isolation is quite a treat in an area as popular as the San Jacinto Mountains. 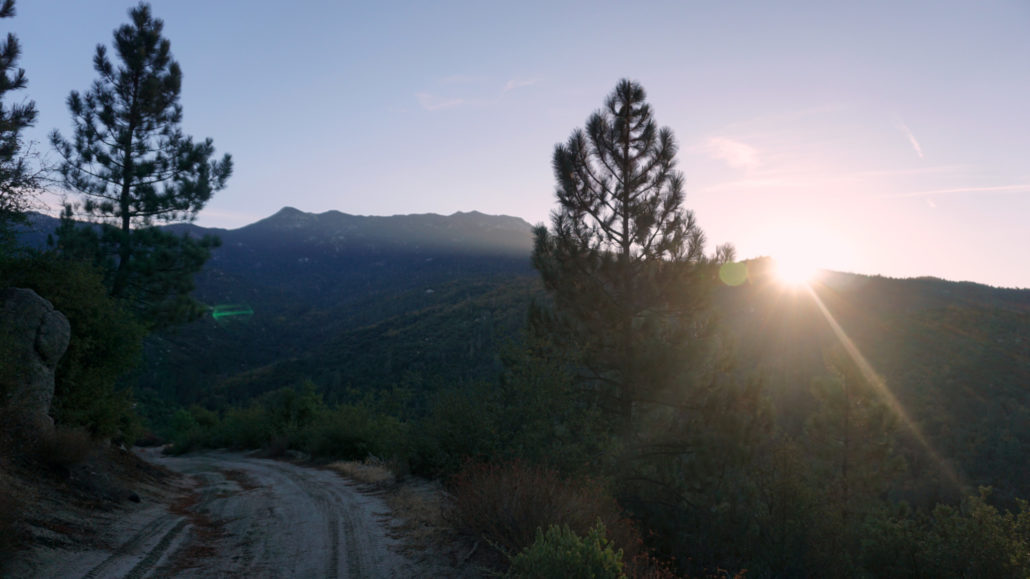 Hikers should also note that summertime temperatures can become rather uncomfortable at this middle elevation. While you may not enjoy this hike much during the summer, the milder temperatures of winter, spring, and fall make this is an attractive option. Additionally, springtime wildflowers can be quite attractive along the route. 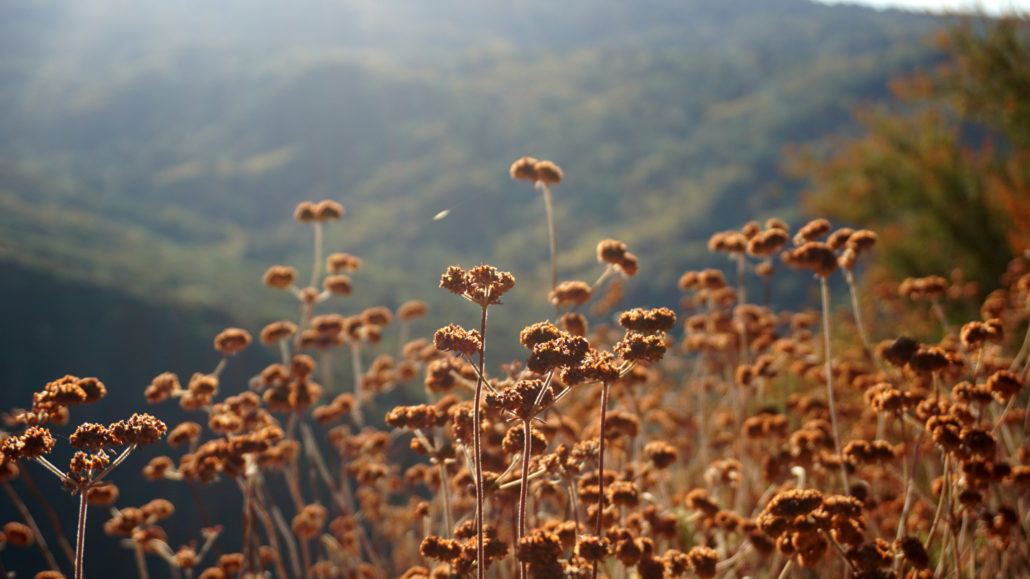 From the Indian Vista parking area, locate an informal path leading away from the western end of the parking area. This informal path darts into the shade of live oaks to connect with the Indian Mountain Truck Trail. Once at the wide dirt road, turn left and begin following the road as it passes over a saddle on a ridge jutting away from Indian Vista. After passing a junction with a dirt road at 0.2 mile, the road begins a 1.3 mile descent to a wooded saddle. Along this descent, the trail loses 500′ of elevation, which, sadly, you will have to gain on the return journey. 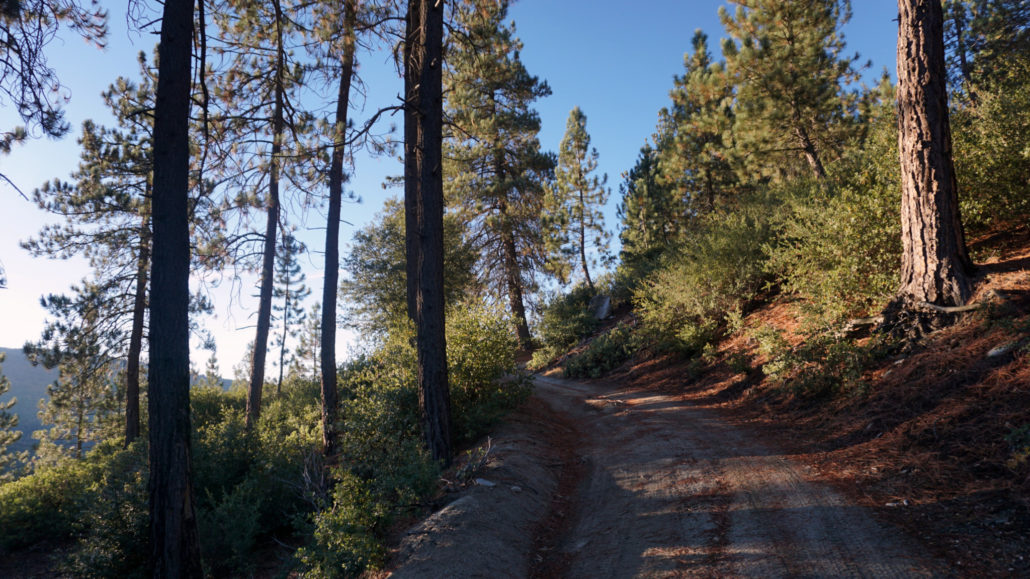 From the saddle shaded by stately Coulter pines, the road begins a stiff climb along the eastern slope of Indian Mountain. The road leaves the tree cover at 1.9 miles and enters a sunny, exposed section of chapparal. After cresting a slight saddle at 2.25 miles, the road bends to the west and soon north, passing along a cool, wooded north slope featuring more Coulter pines and a few black oaks with leaves flashing gold during October and November. 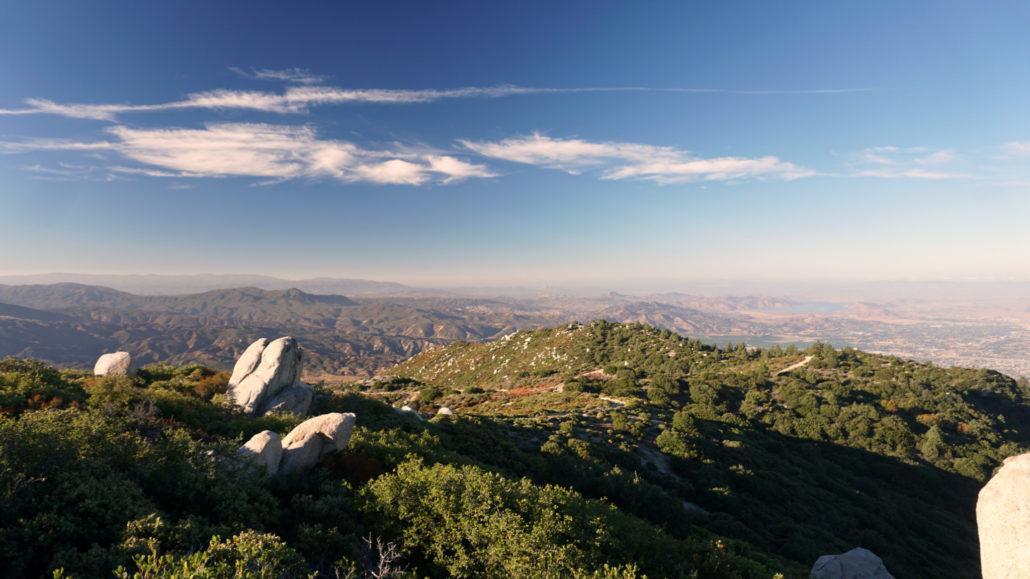 At 2.75 miles, the road passes a spur jeep trail that splits off on the right toward a vista point. After another 100 yards or so along the road, look for the trace of an informal path that splits off toward Indian Mountain’s rocky summit. This path winds through chaparral as it approaches the rocks. A bit of tricky scrambling and climbing will get you onto the topmost rock, but hikers less comfortable with these sorts of maneuvers can gain a good look at the summit’s panorama by peering around the topmost boulder. 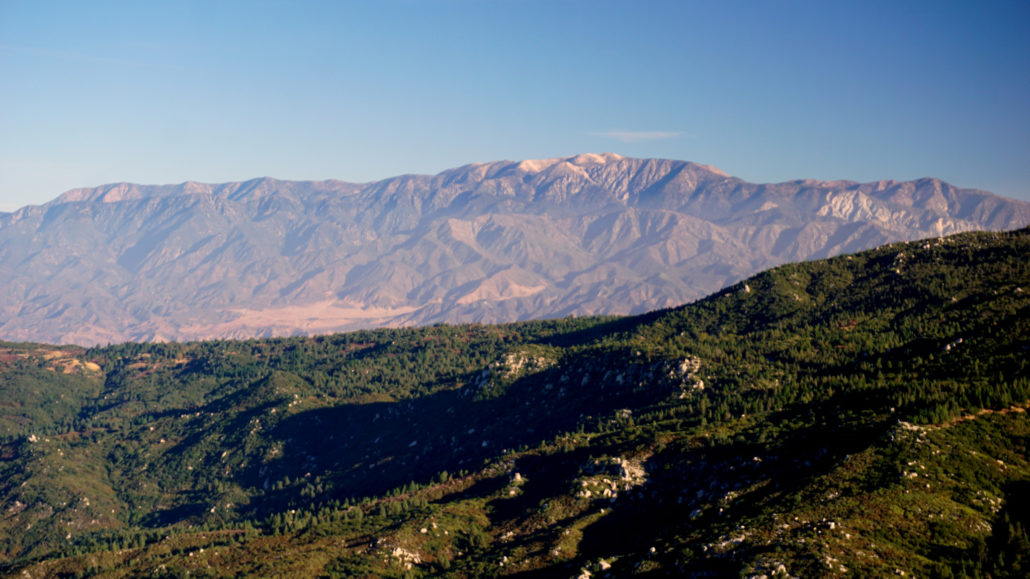 Despite the mountain’s relatively low elevation, the views here are outstanding. Among the more prominent landmarks visible from the summit include the eastern ramparts of the San Gabriel Mountains, including Mt. Baldy, Cucamonga Peak, and the Three T’s.  Looking southwest, you’ll spot the distinctive saddle formed by Modjeska and Santiago Peak crowning the Santa Ana Mountains. Due south lies the long, flattish highlands of the Palomar Mountains and Agua Tibia Mountains. Dominating the scene to the east and northeast are the highlands of the San Jacintos, while the formidable wall of the San Gorgonio Mountains loom to the north. 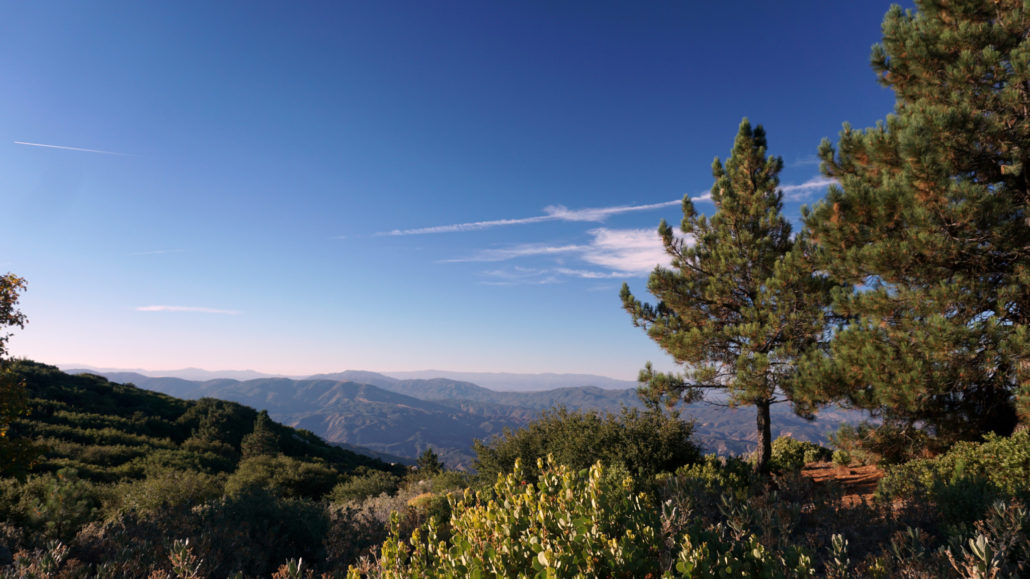 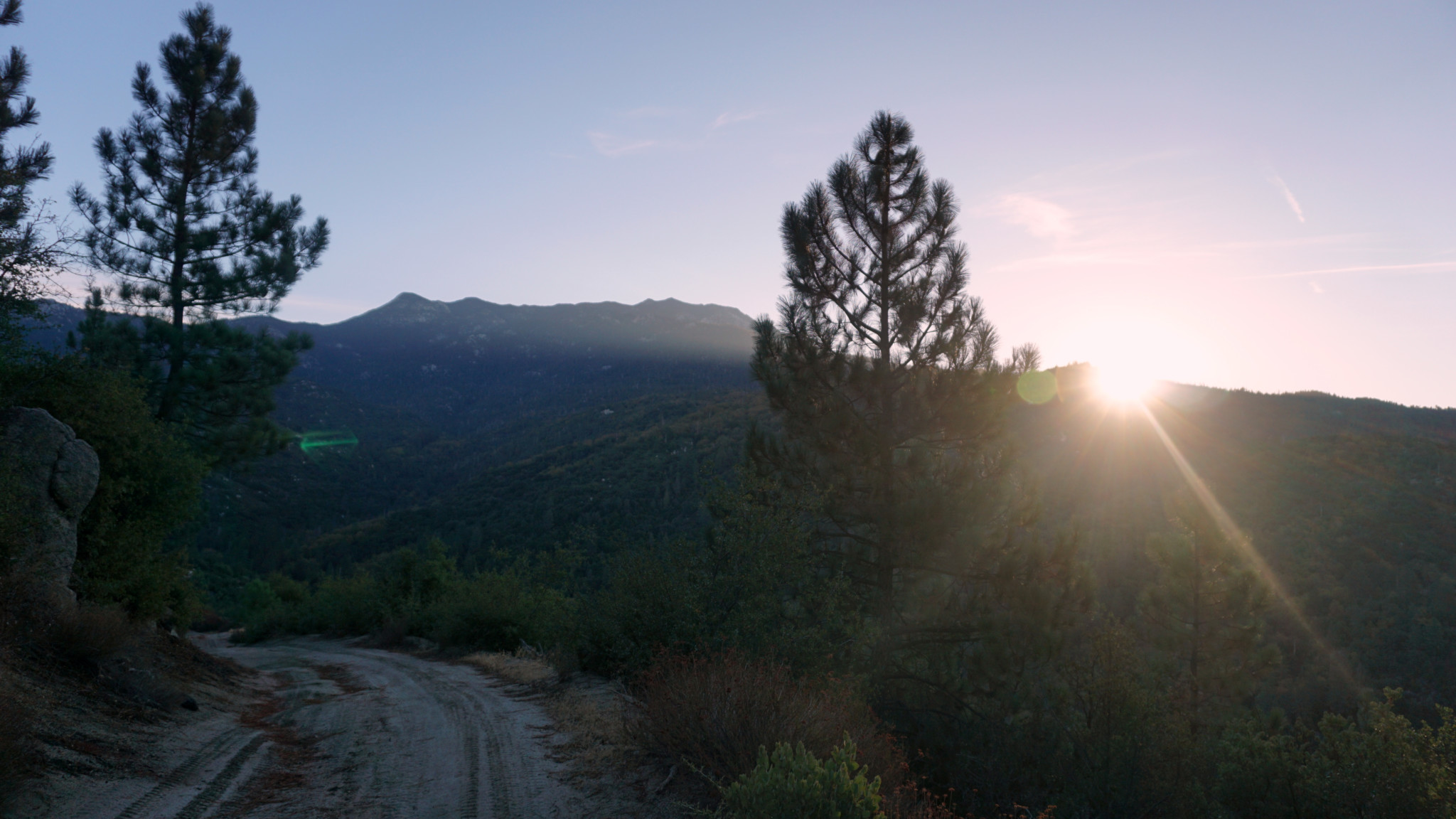 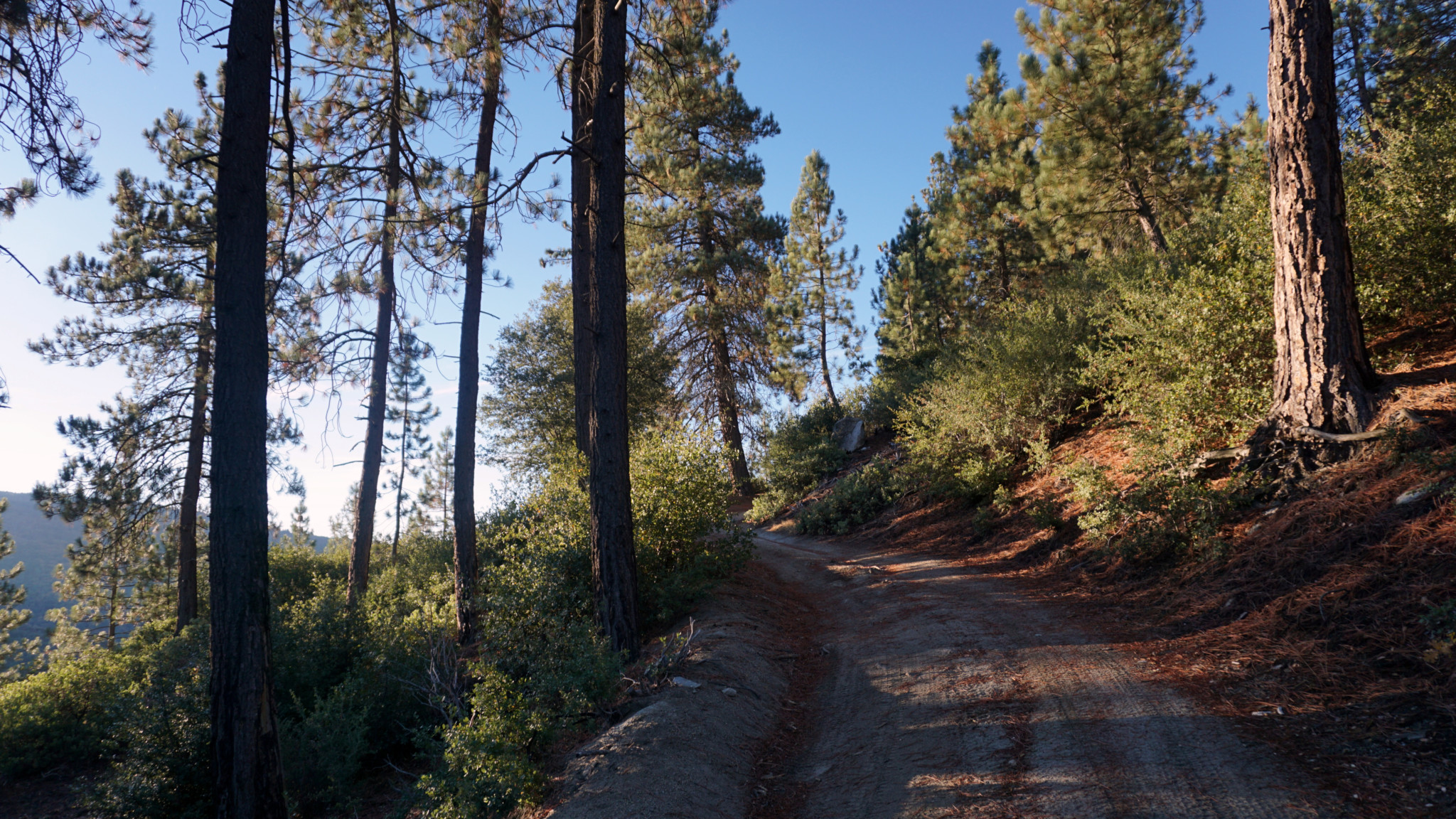 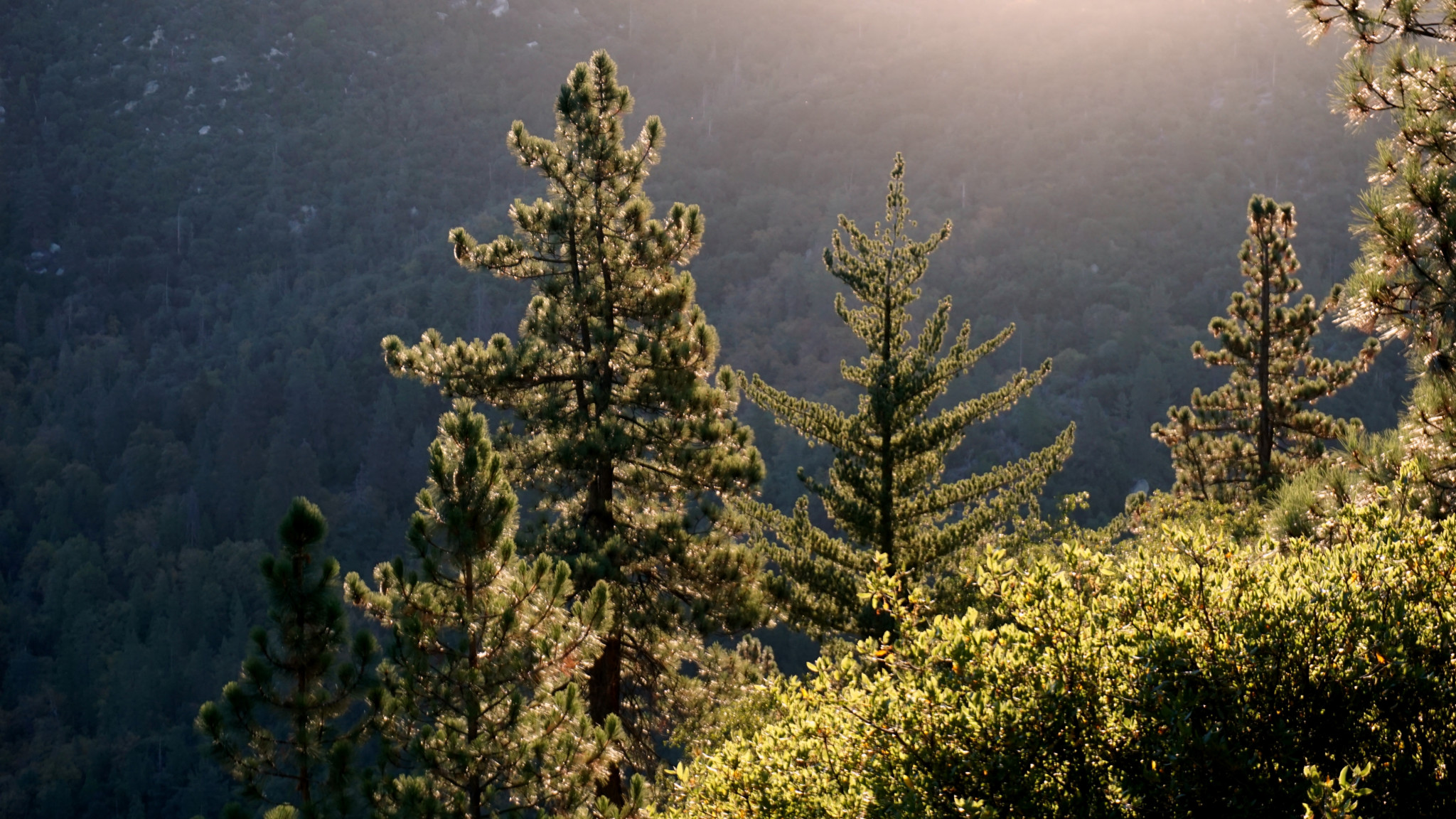 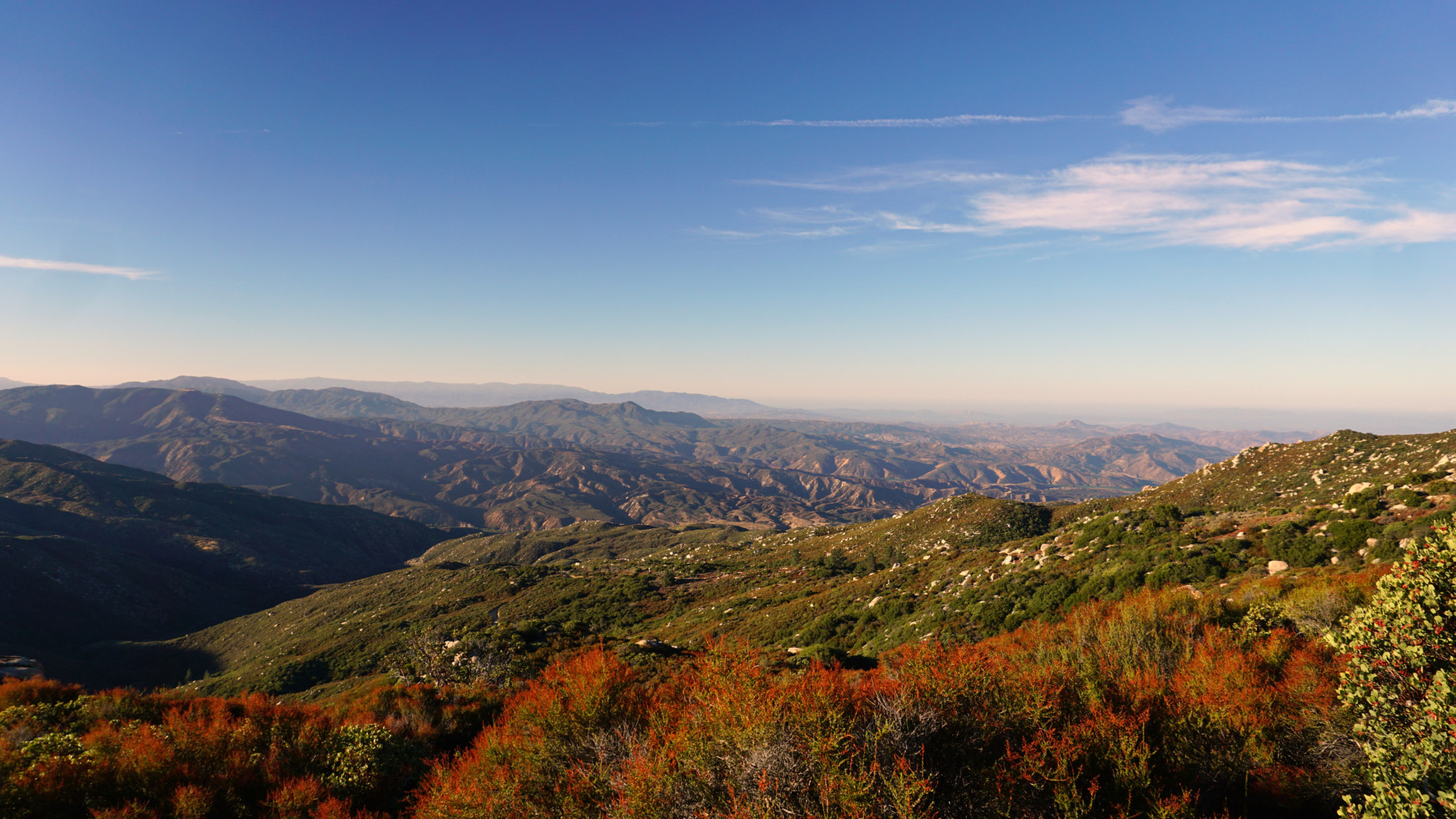 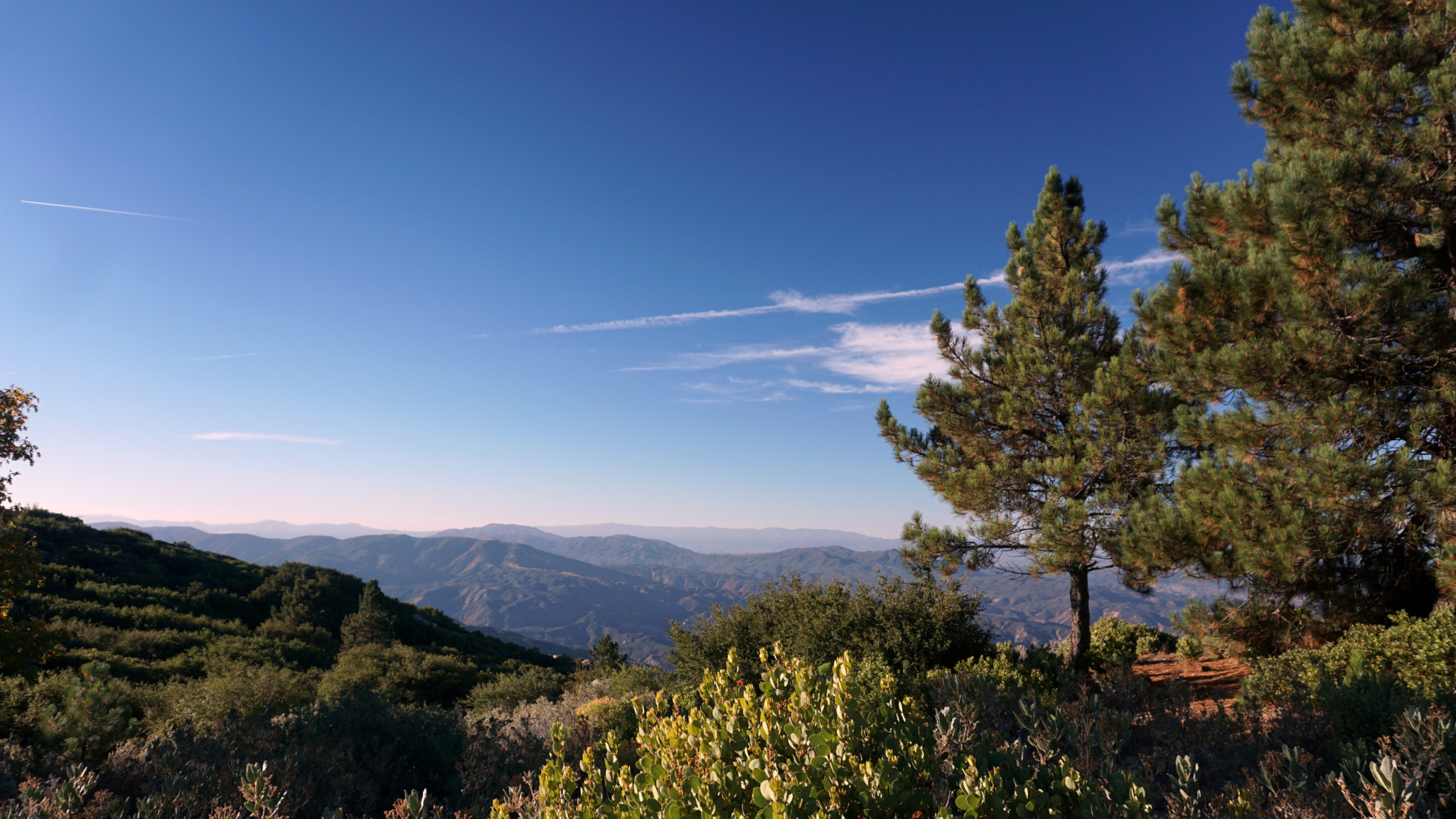 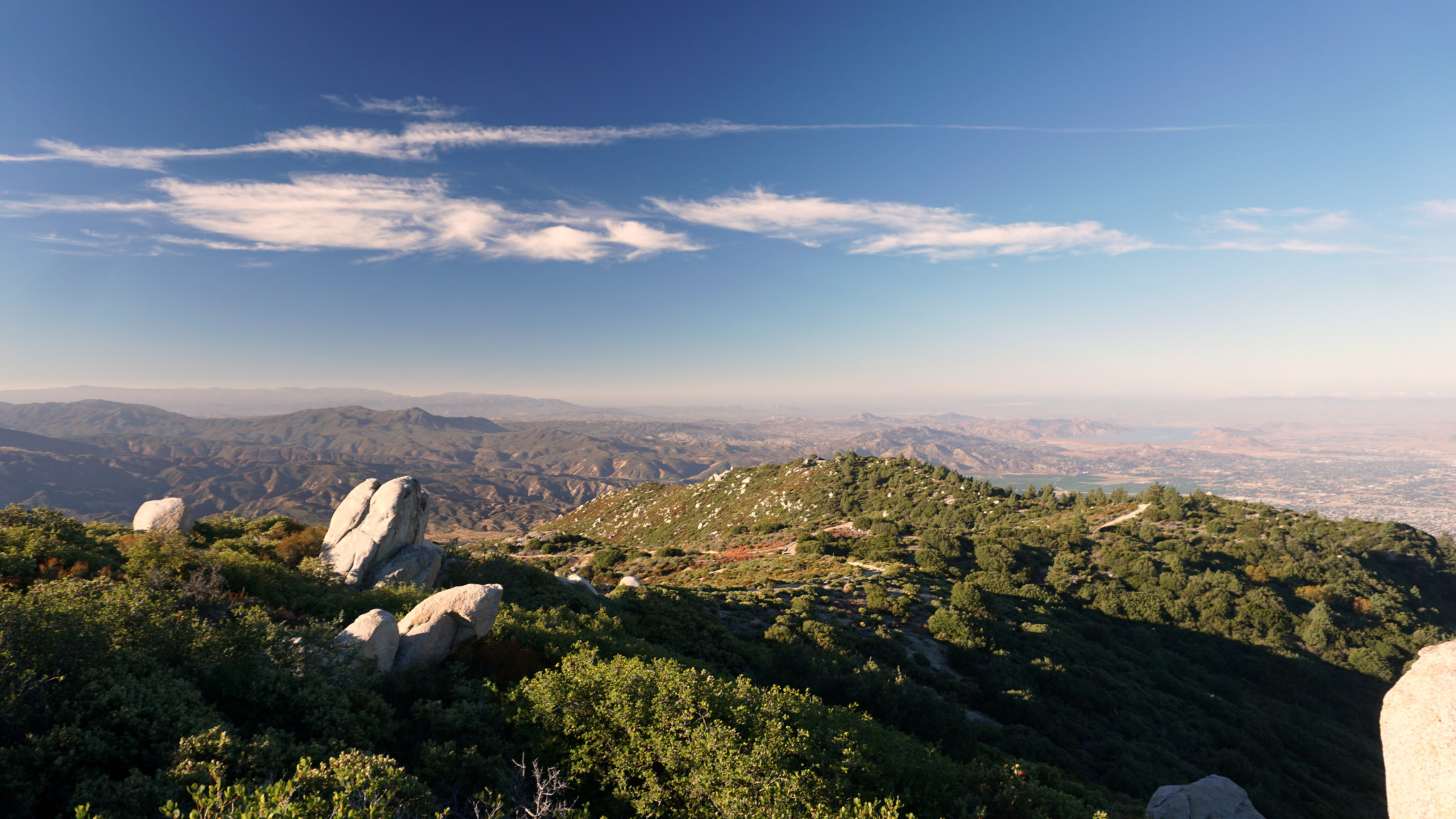 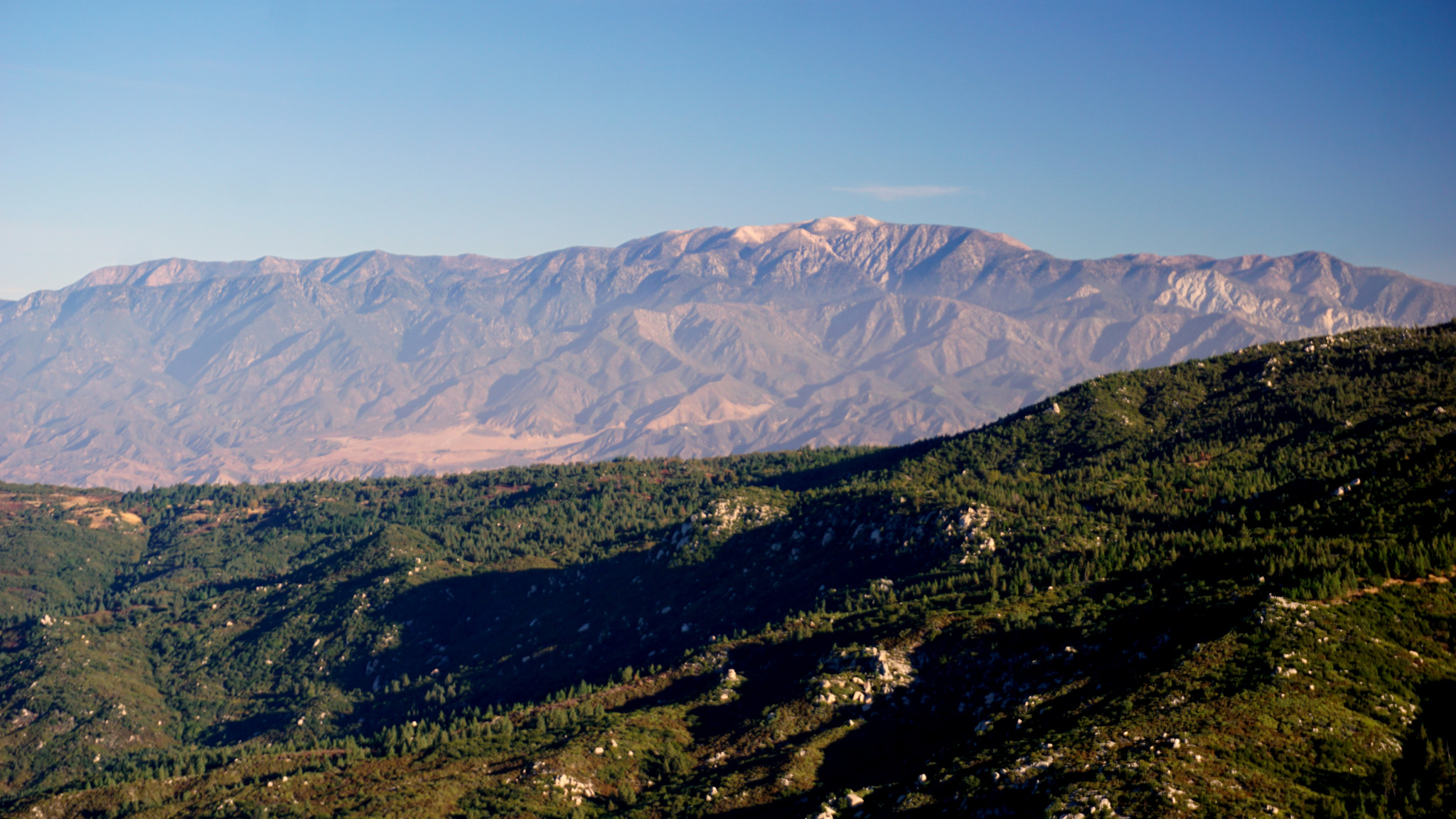 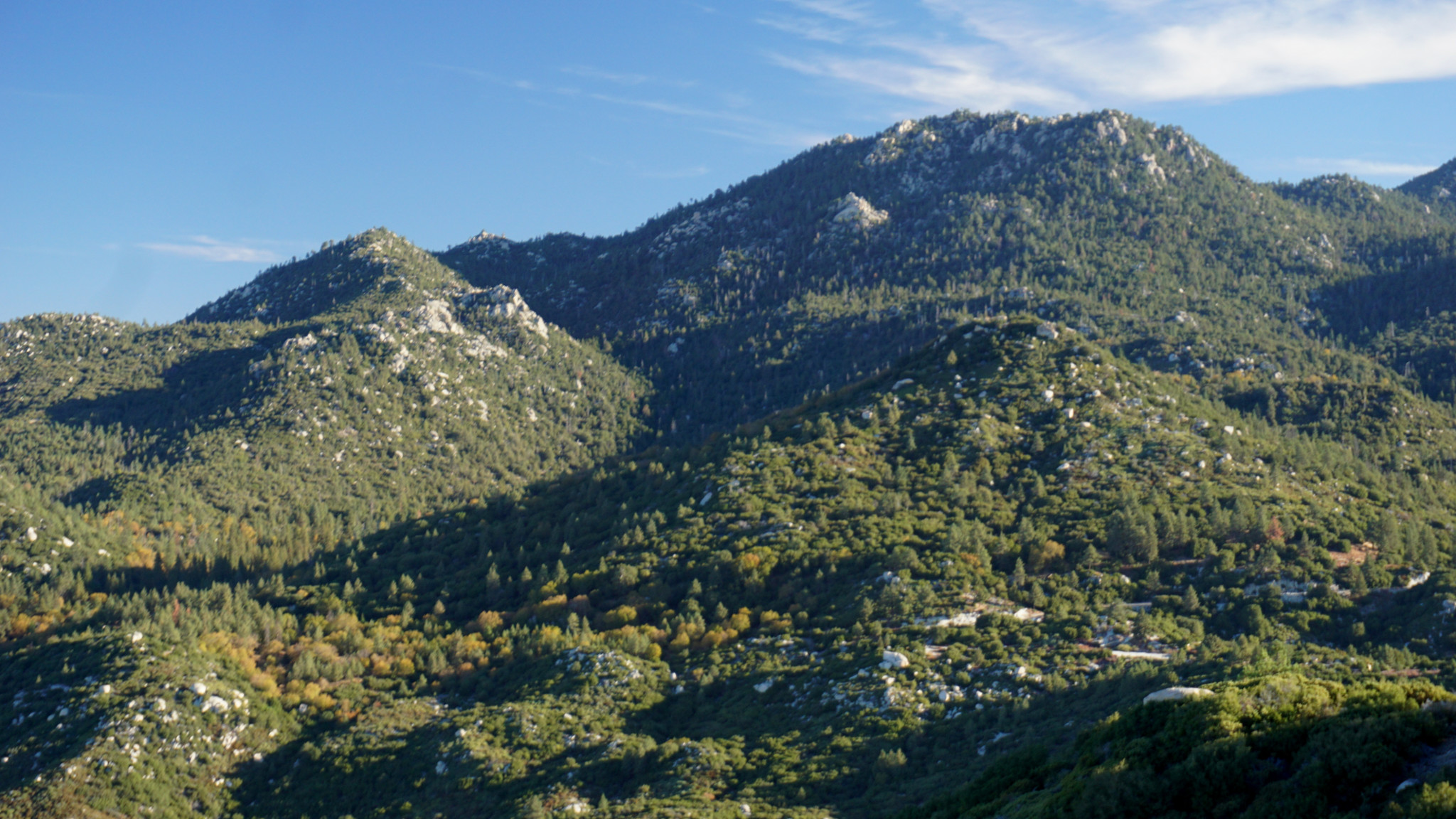 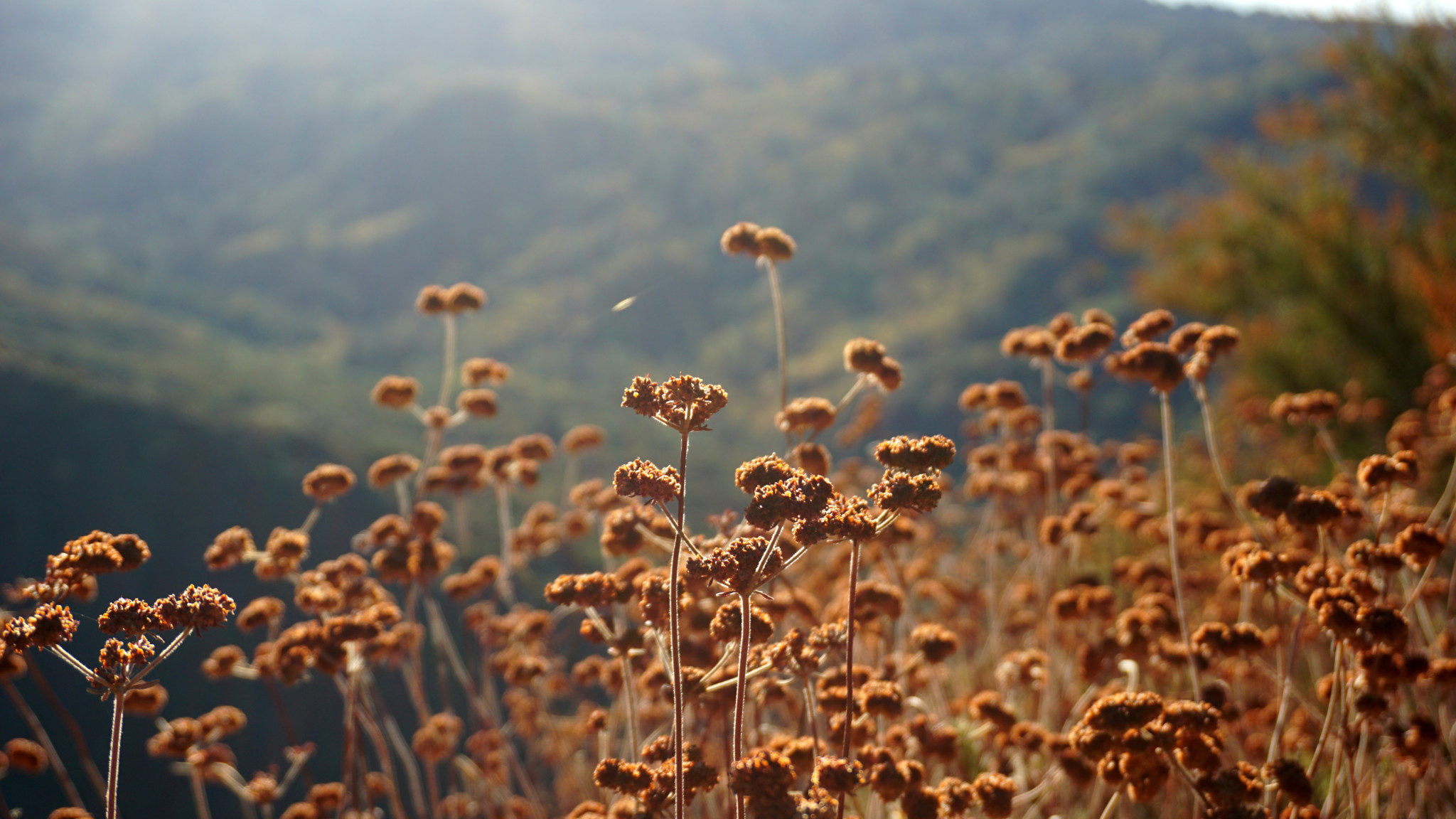 The trail follows a wide dirt road up until the very end. The approach to the summit follows an informal path through chaparral to a cluster of boulders marking the summit.

Exit Interstate 10 in Banning, exiting for CA 243 south to Idyllwild. Turn right onto S. 8th Street, and make an immediate left onto Lincoln Street. Turn right onto San Gorgonio Avenue, which becomes Banning-Idyllwild Panoramic Highway. Continue for 15 miles to the Indian Vista turnout on the right side of the road.