This trek to Cucamonga Peak is a lengthy, steep hike up to one of the tallest peaks in the San Gabriels. You’ll get a great workout, and amazing views off the peak’s nearly-sheer face — a small promontory that reveals the great L.A. Sprawl before you.

One of the greatest things about hiking on Sunday mornings — or really, doing anything on Sunday mornings — is that you’re really one of only a handful of people in Los Angeles County who’s awake. The 210 was a breeze, and while I was stopped at the off-ramp, I caught the first glimpse of my destination – Cucamonga Peak, on the right. I parked at Icehouse Canyon again, this time dressing in the necessary hiking layers instead of the usual t-shirt. It was around 40 degrees when I started, and the massive mountain formations on either side of the canyon block out most of the warming sunlight until later in the day. The water was still flowing through the canyon stream, which provided a great white noise-backdrop as I passed slow hikers in overstuffed backpacks on the way up.

I got nothin’ against slow hikers. Most of the time when I’m hiking with Will or his friends, I’m the slow hiker in the group. But the Icehouse Canyon trail is absolutely littered with people hauling fully-crammed overnight packs for an 8 mile round-trip. Hike light! You don’t need all that crap! All that said, the trail in the morning is pretty lightly trafficked, and it’s still one of my favorites in the San Gabriels. As it was my third time up the trail, though, I didn’t stop to sightsee much. Except for when I came upon Columbine Spring. Columbine Spring is the primary source of the picturesque stream that runs down Icehouse Canyon, and the spring itself lies almost directly beneath the trail to Icehouse Saddle. Last time I wanted to snap a picture, it was surrounded by a group of loud teenagers. This time, it looked like I had the place to myself, so I kneeled down to peek in.
Almost immediately, I heard a loud, “Oh! What’s down there?” as two middle-aged men stepped down to join me.

“This is Columbine Spring,” I said. “It’s the source for the stream in the canyon.” One of them perked up.

I looked down at the water seeping from between the rocks. “Well, you could drink it. But you probably shouldn’t unless you treat it first.”

The man looked at his hiking partner. “This must be the drinking water!”

Fine. I stepped aside as the man reached in and filled up a water bottle and took a swig. He said it tasted great, and asked where I was headed to today. I tried to explain, but he didn’t seem to understand. Turns out, it was his first time hiking. I waited for the men to leave before dipping my hands into the spring in the Shinto style and continuing on my way. I didn’t stop much on the rest of the way up, except to carefully walk my way around some of the first trail snow and ice of the season. I made it up to the Saddle in about an hour and 40 minutes, 20 minutes faster than the last time I scrambled there. Let’s hear it for the gym!

Immediately after leaving the Icehouse Saddle, the trail to Cucamonga Peak got rugged, unkempt, and solitary – just the way I like ’em. Unlike the steady switchbacks of the Icehouse Canyon trail, this one teetered dangerously on the edges of cliffs, had hairpin turns and boulder scrambles. Good clean fun. Looking out at the long ridge of Cucamonga Peak, all I could hear were the birds chirping around me. That same wonderful silence that permeated the San Gorgonio Wilderness was everywhere here. Which was weird, because I could see cars on the 15 just to the left of this scene. Oh well. I’m not gonna complain. A little further down the trail, I came upon two medium-sized holes in the side of a steep incline. There was some rusted steel cable strewn about the ground, so I assumed the holes were the result of an old mining operation. But unlike the other mines I’d been to, I didn’t see any other evidence. There was certainly no way for anyone to easily get anything out of this mining area. The trail in was much too narrow for machinery, and the only other routes were straight down the side of the mountain.

I tried to peer into the lower cave, but couldn’t see anything of interest. I wanted to climb up the ridge to get to the upper cave, but I also wanted to get to the peak and back before nightfall. And I didn’t want to climb all the way up there just to see an angry mountain lion. That’s for damn sure.

I soon reached Cucamonga Saddle and started up the trail toward the peak, mercilessly switchbacking the entire way. This round wasn’t too bad, as far as switchbacks go, as the trail swapped from north to west sides of the mountain, offering alternating bits of cool shade and warm sun. I also got some nice views of one of my favorite majestic mountain groups – the Baldy Bowl. You can clearly see Mount Baldy in the left-of-center. Harwood and Pine Mountain are to the right, and you can make out the bump of Timber Mountain and the sharp peak of Telegraph in the center-right. After a bit more trudging (and stopping to eat a CLIF bar or two), I came within sight of the fire-battered ‘Finish Line Ahead’ sign, marking the top of Cucamonga Peak, and pretty much just sprinted up the rest of the way. I leapt onto the small rock formation that marked the peak, threw off my CamelBak and looked out at the smoggy suburban sprawl below me. Visibility was much lower than it was the last few times I was in the Baldy region, but it didn’t completely destroy the views … and of course, I was above the smog, so I got full sun and clear blue skies. I met two younger guys who were nearly passed out near the peak. We chatted for a bit, and I found out they backpacked and hiked in overnight for their first hiking trip ever. A 3800′ elevation gain with a full pack is definitely one way to try out a new hobby. But despite being very tired, they were in good spirits, and asked me – the Sage Hikemaster who’s almost been hiking for a year now – if there were any good trails in the area.

I gave them directions to a few much-lower-intensity hikes in the eastern San Gabriels. Hopefully they’ll keep it up. I took a few pictures for them, and they repaid me in kind: After the summit, a no-nonsense, fast-paced hike got me back down to the trailhead by 4:10PM. Just about six hours – including a very lengthy lunch – for the whole trip. Not bad. And one more peak crossed off my list. 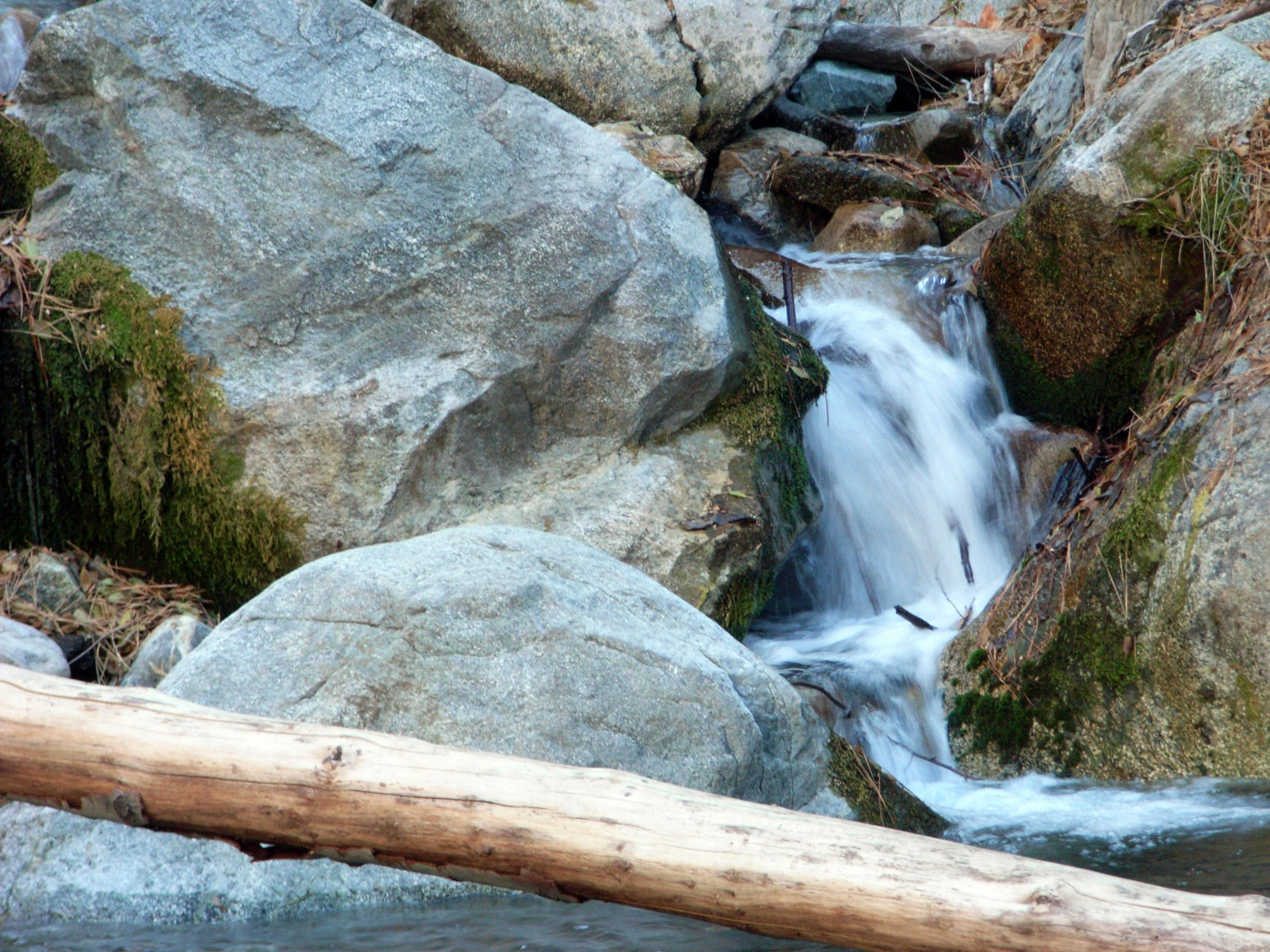 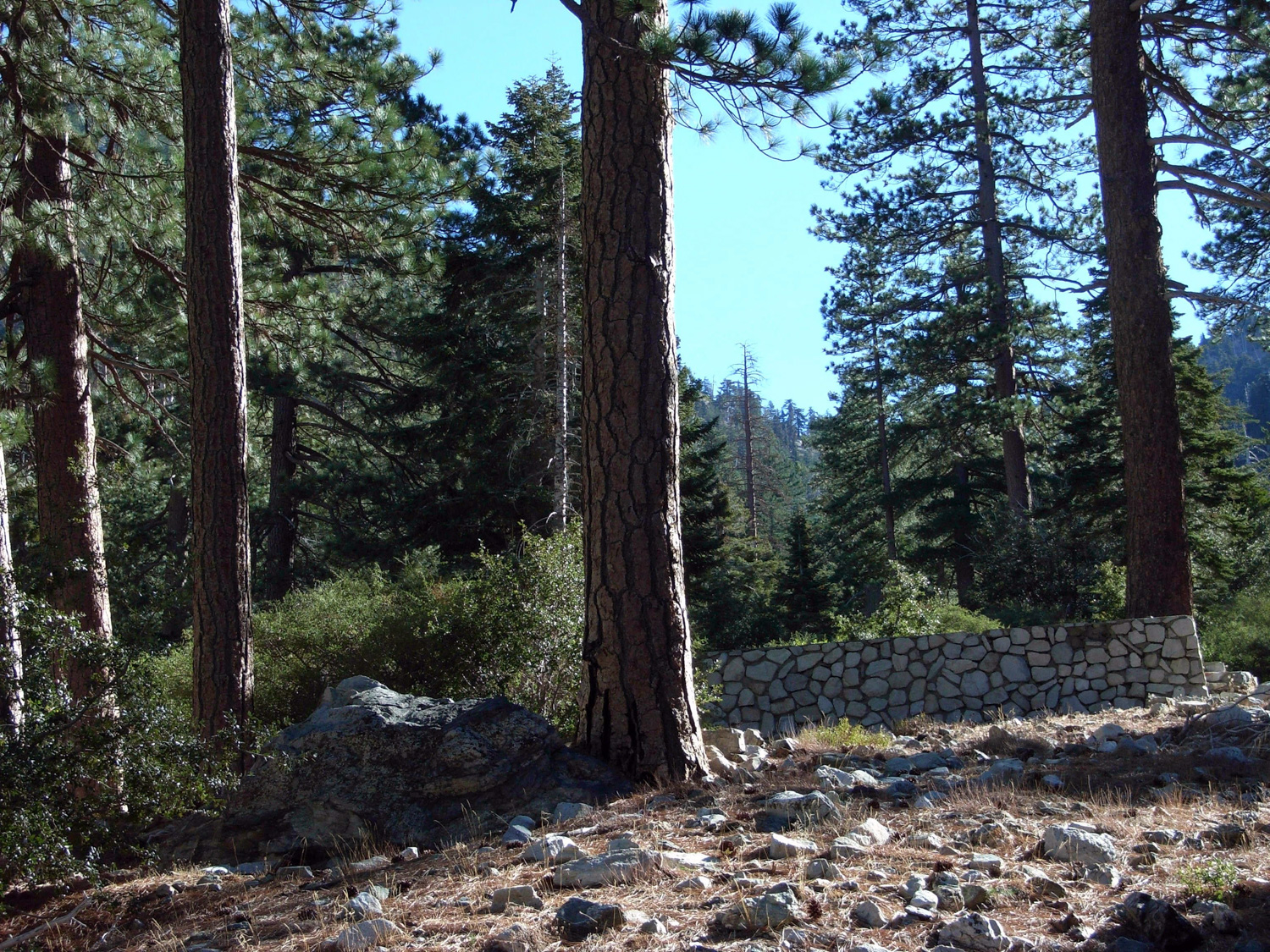 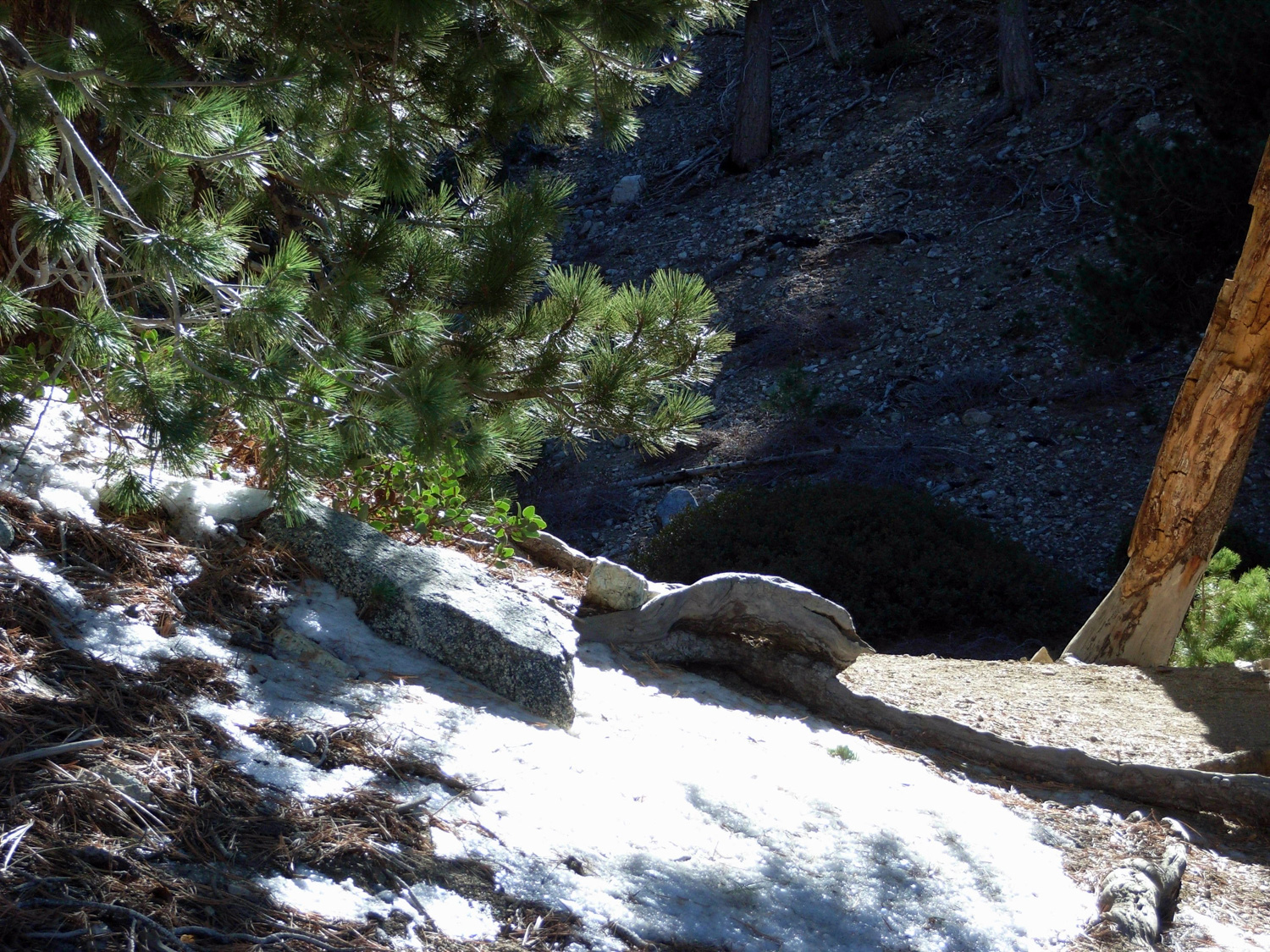 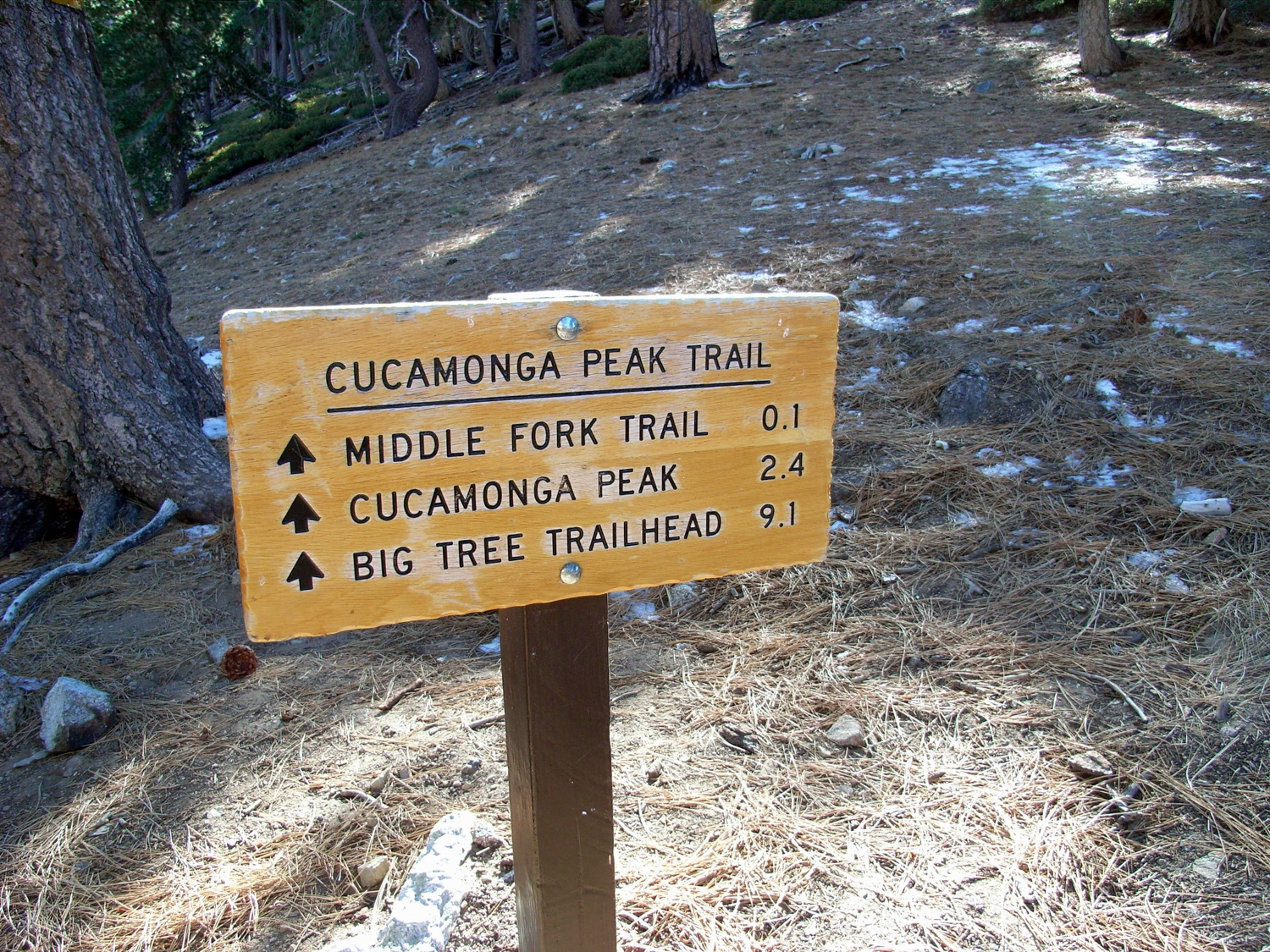 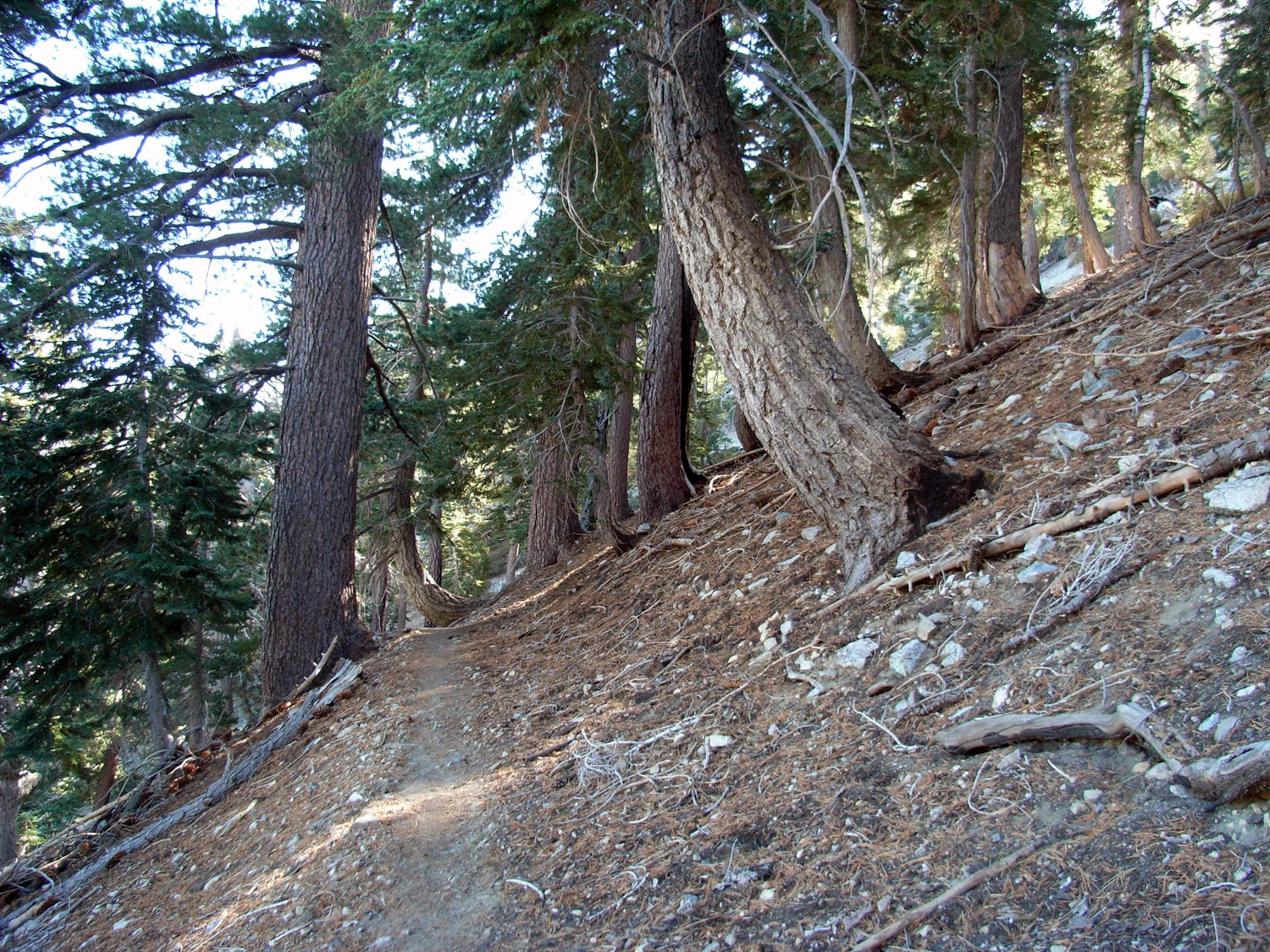 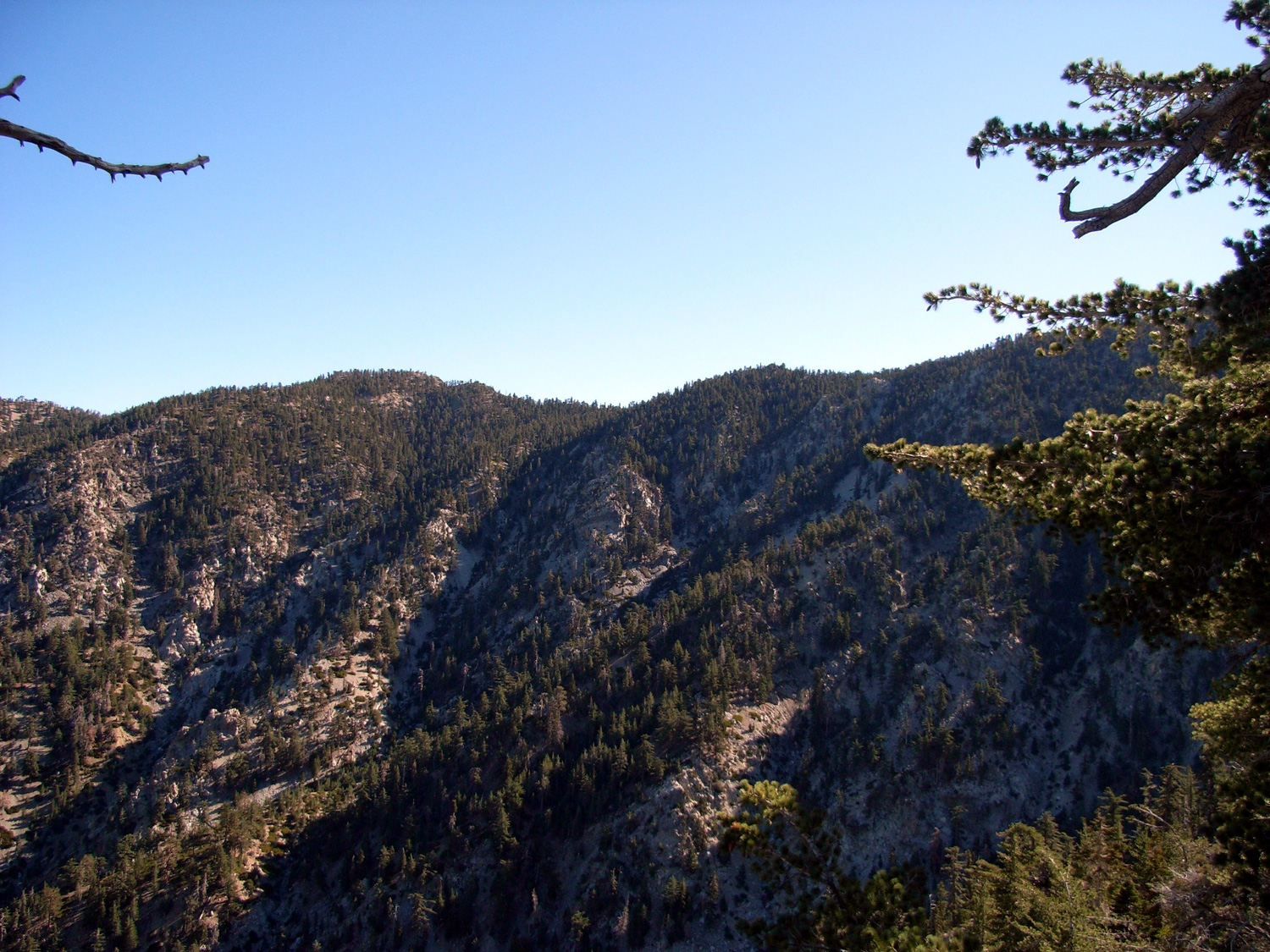 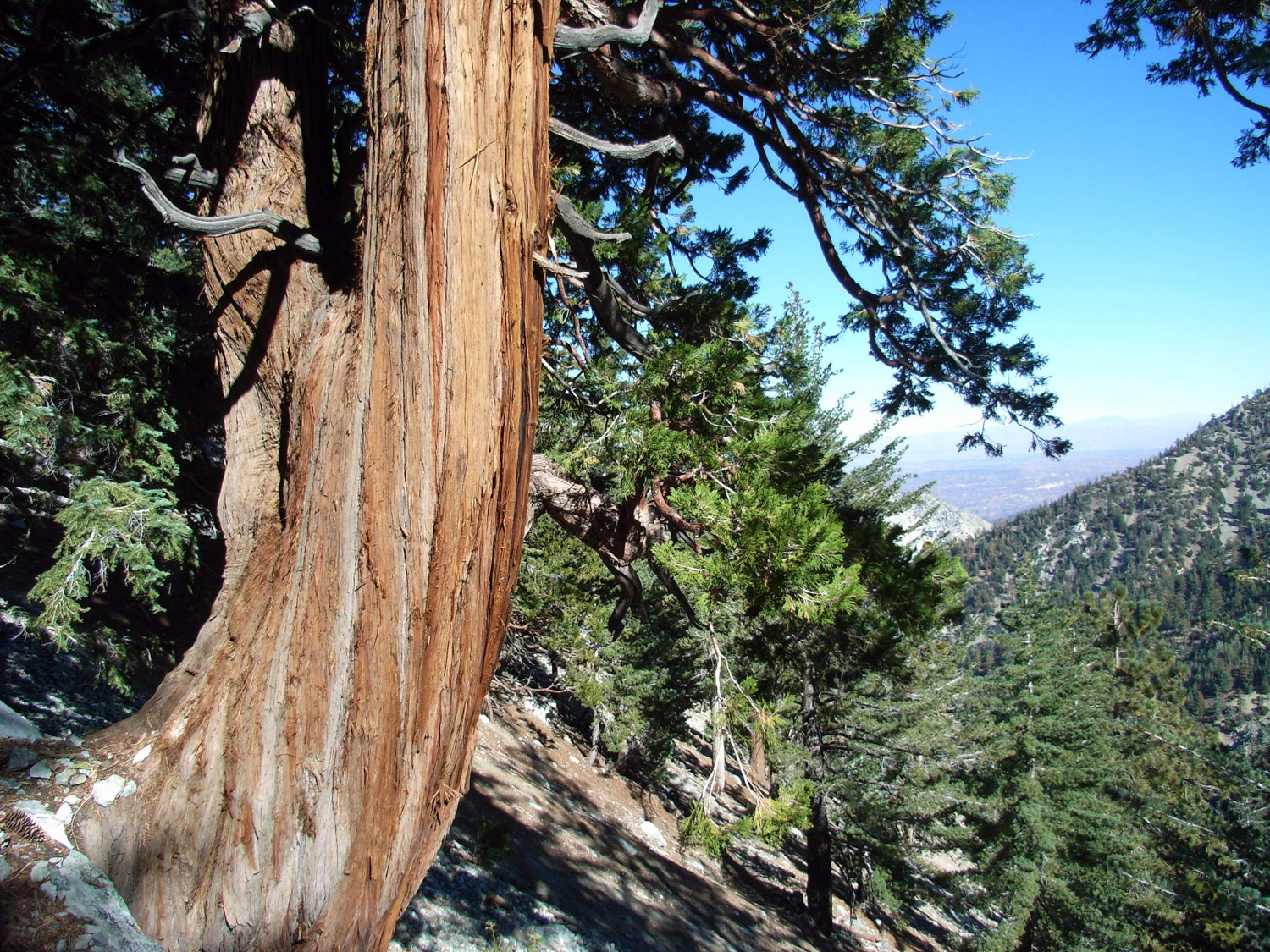 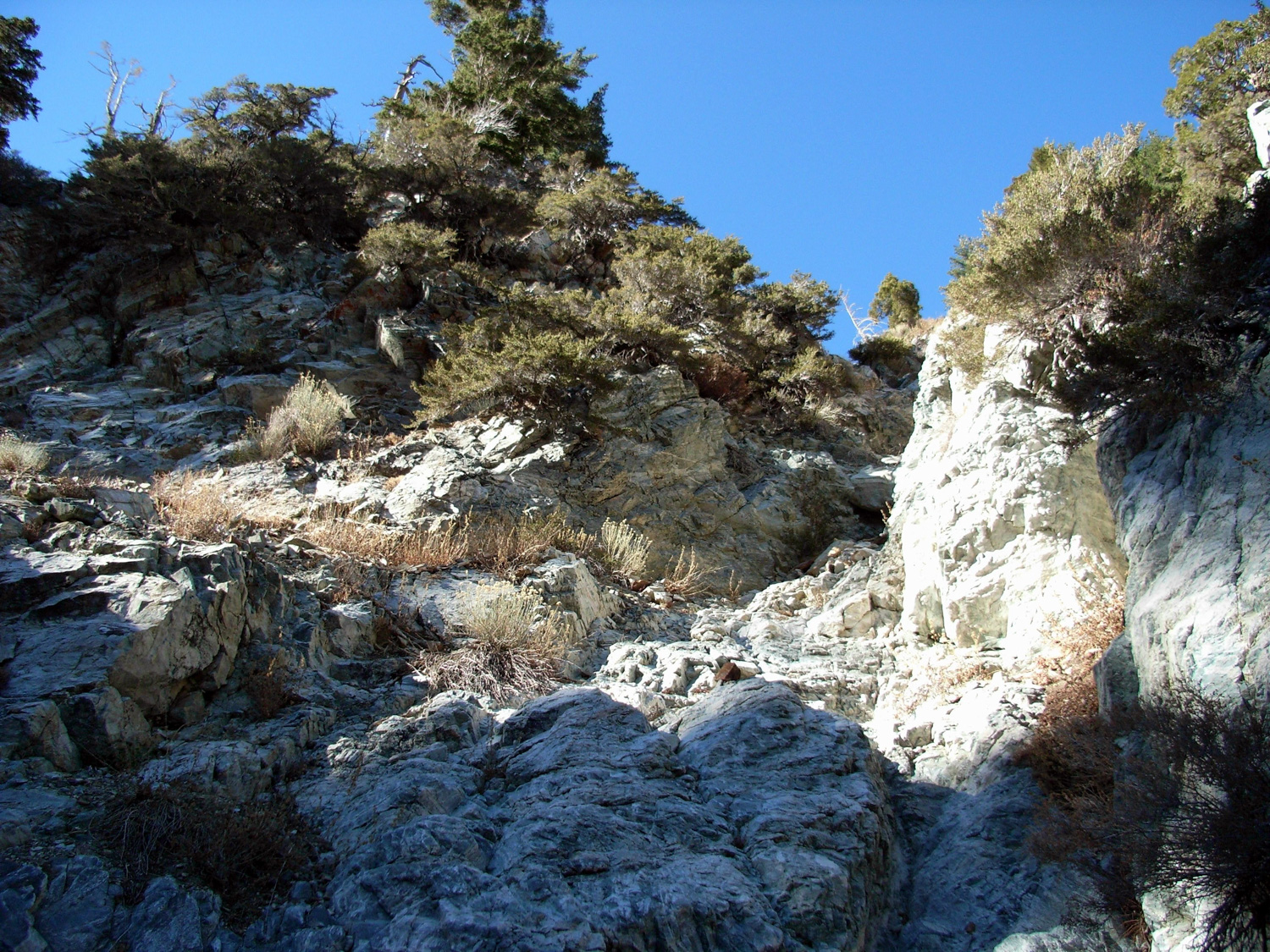 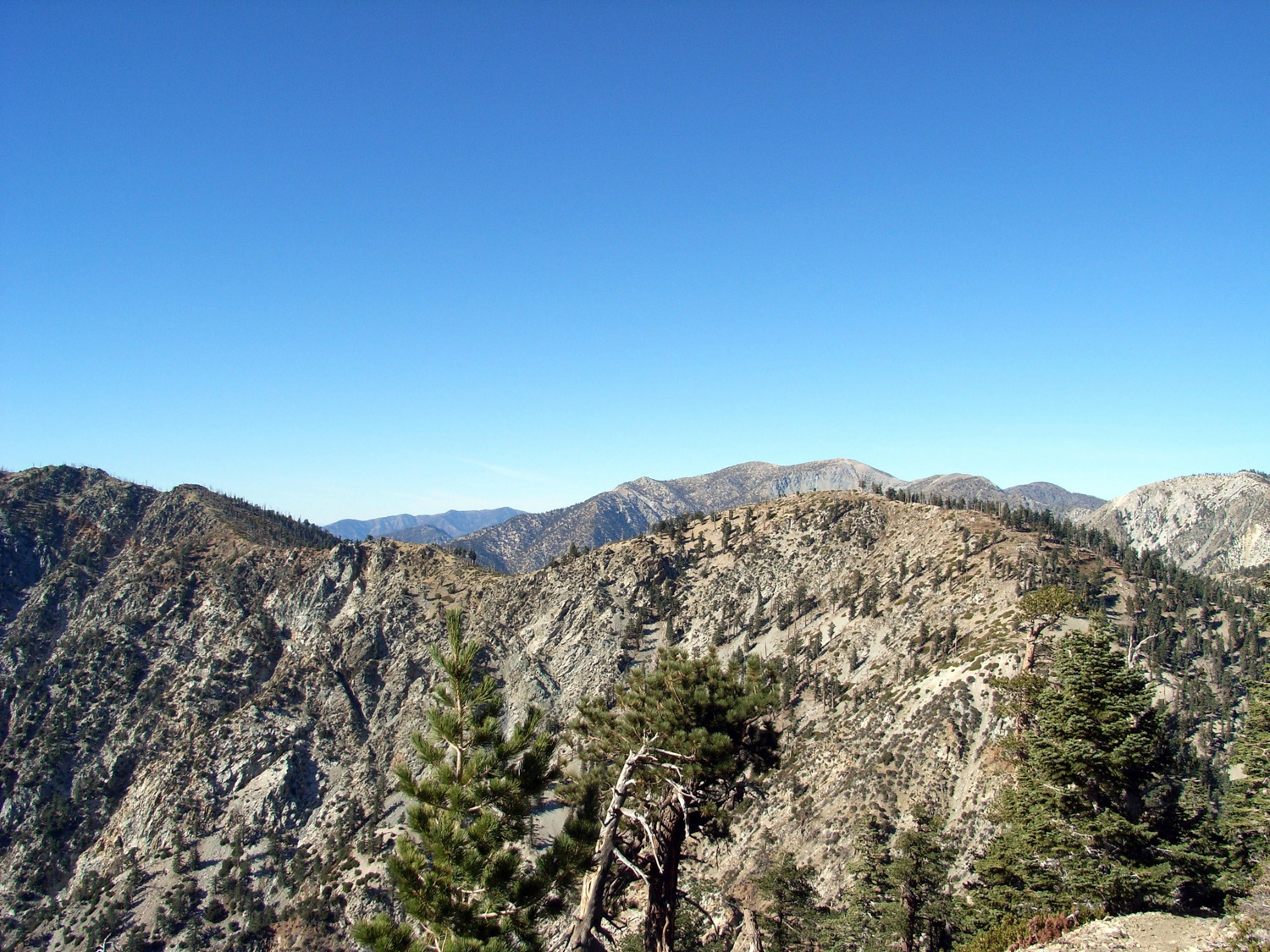 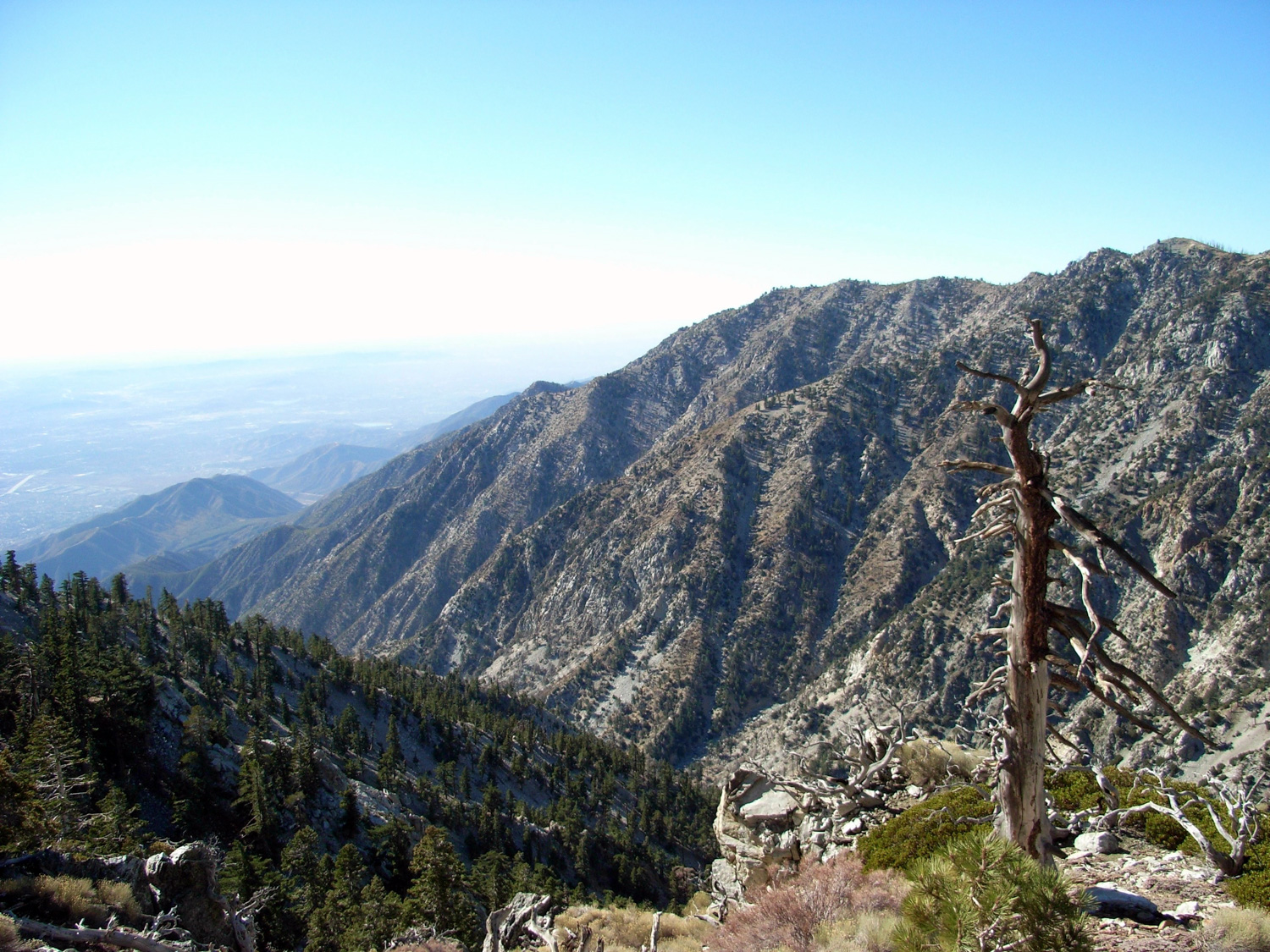 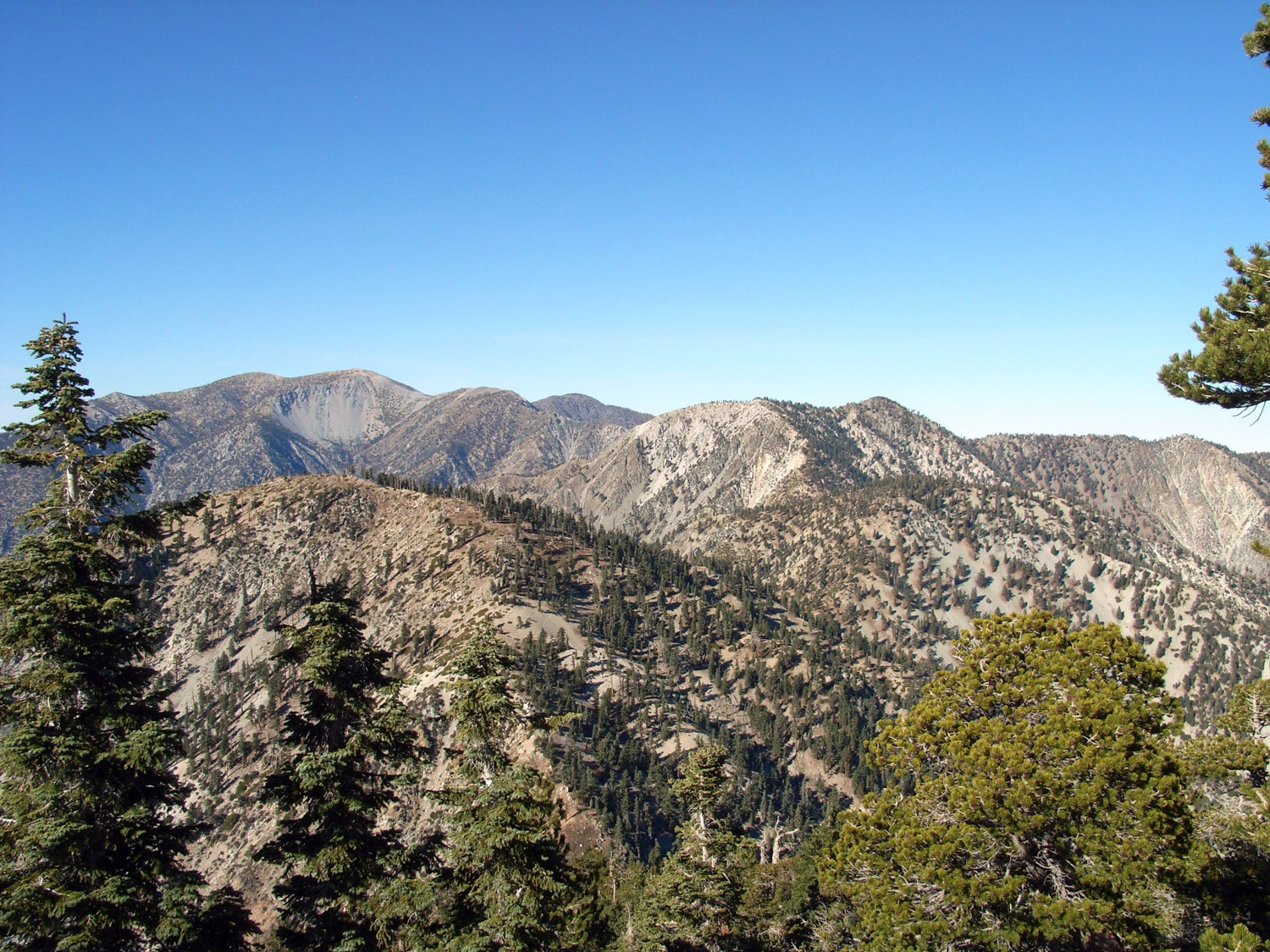 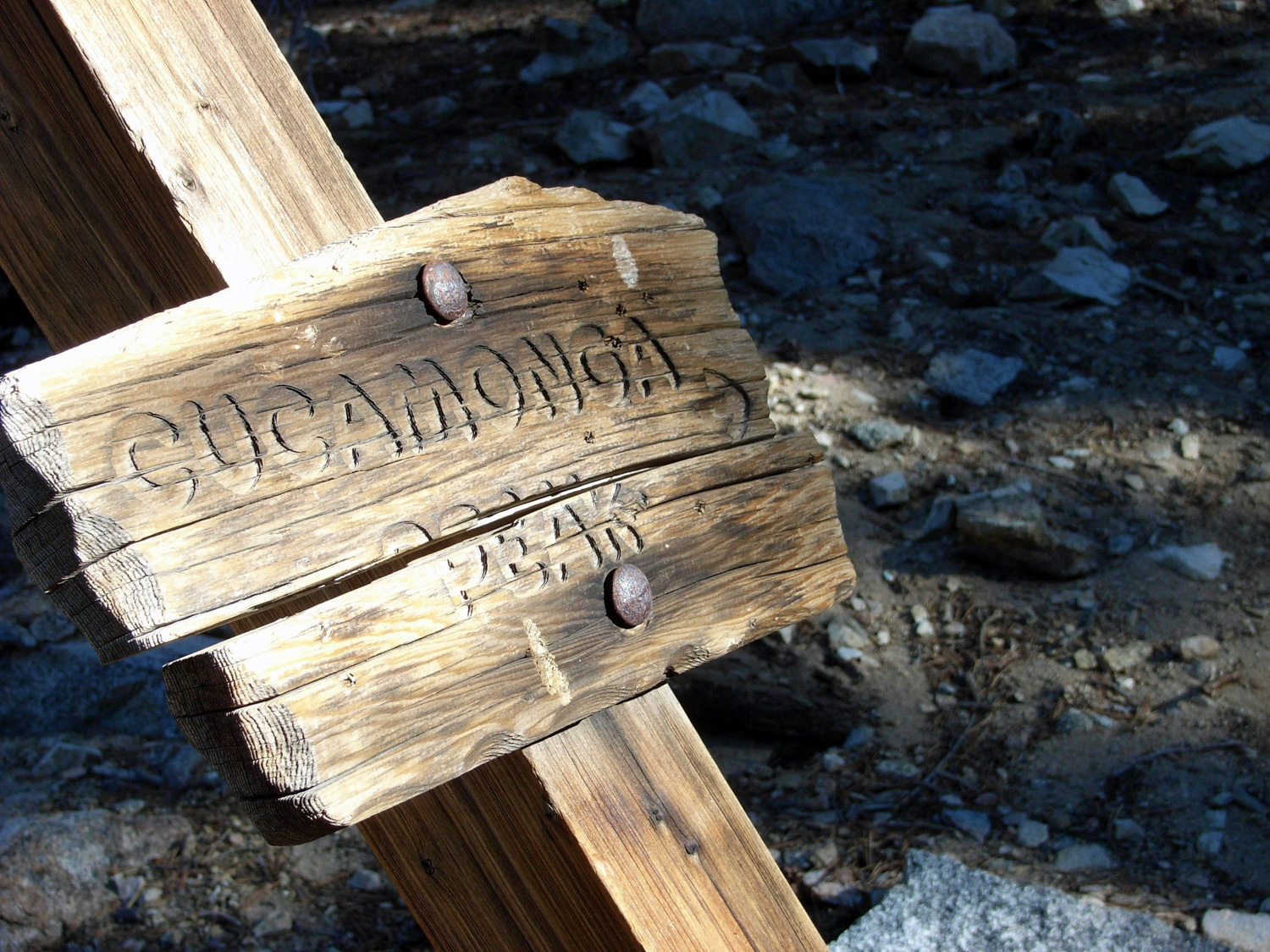 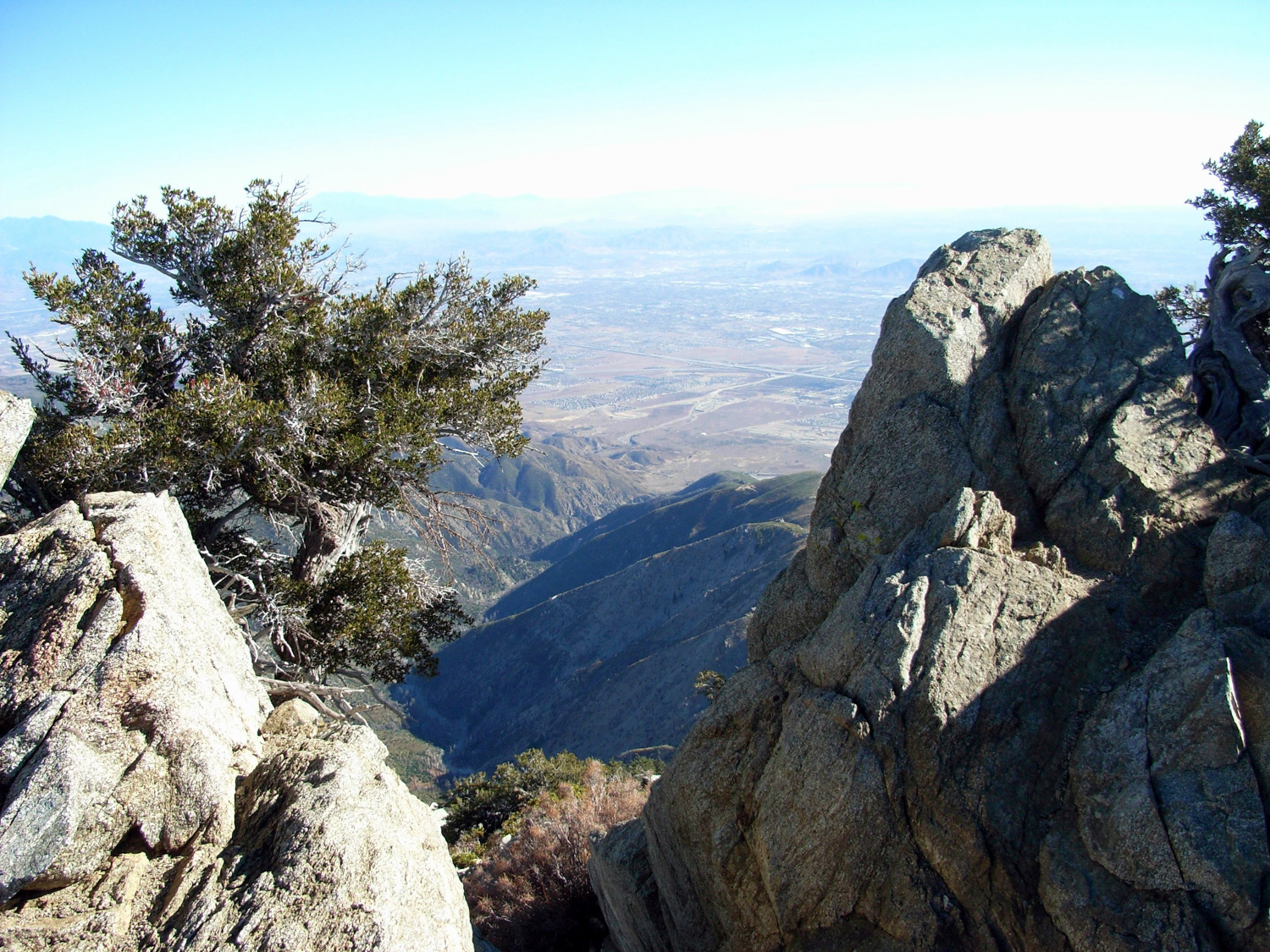 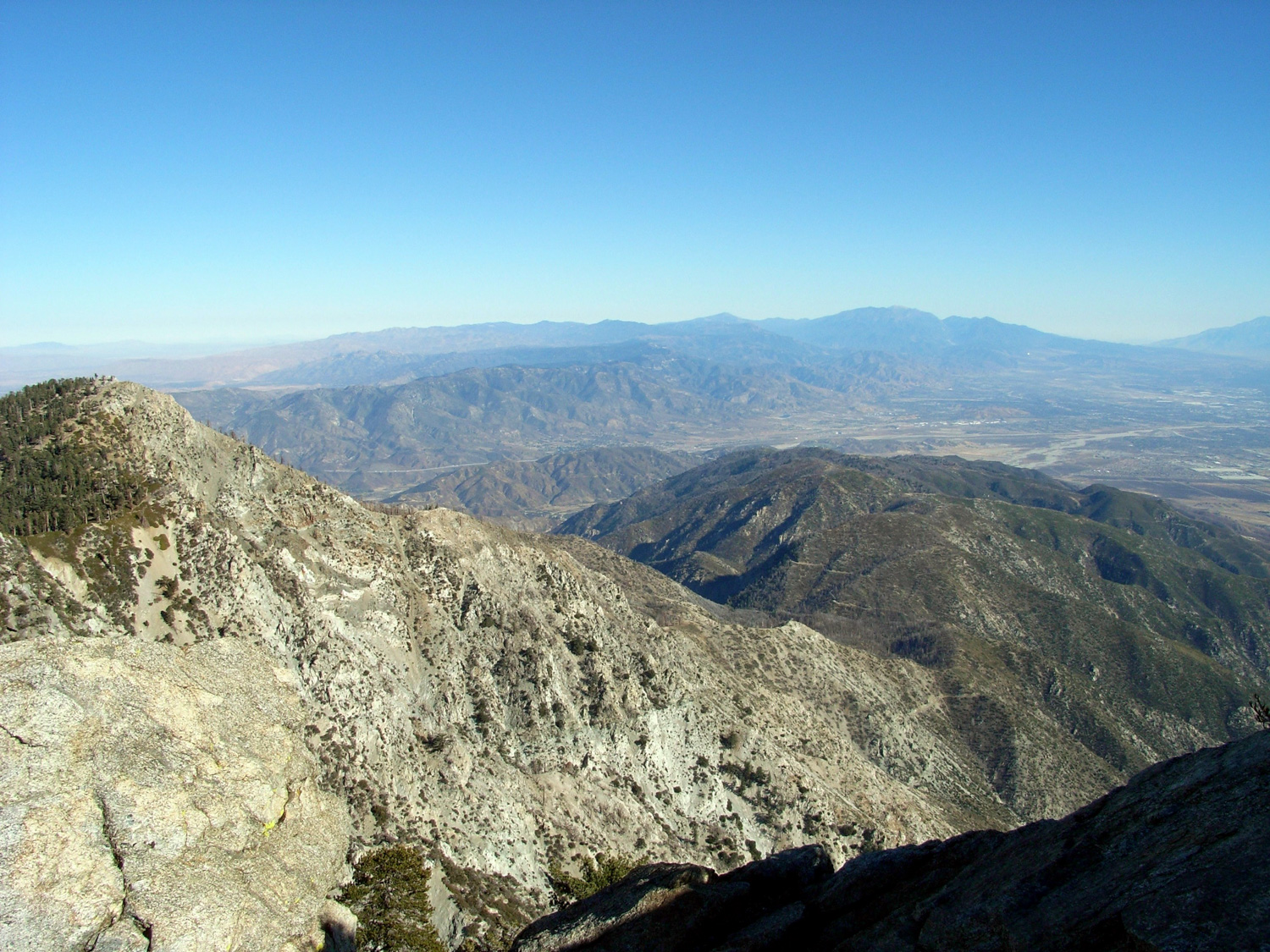 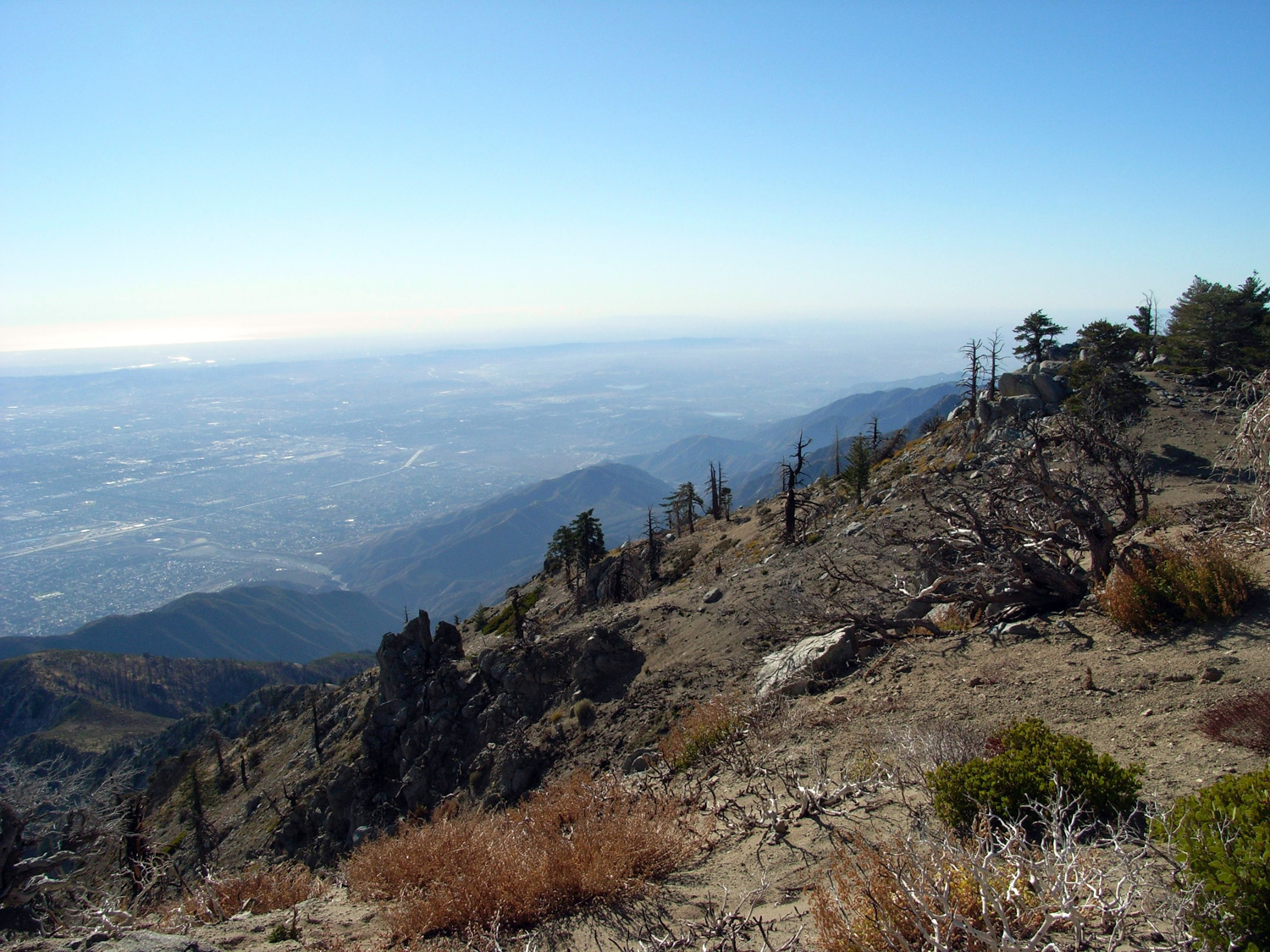 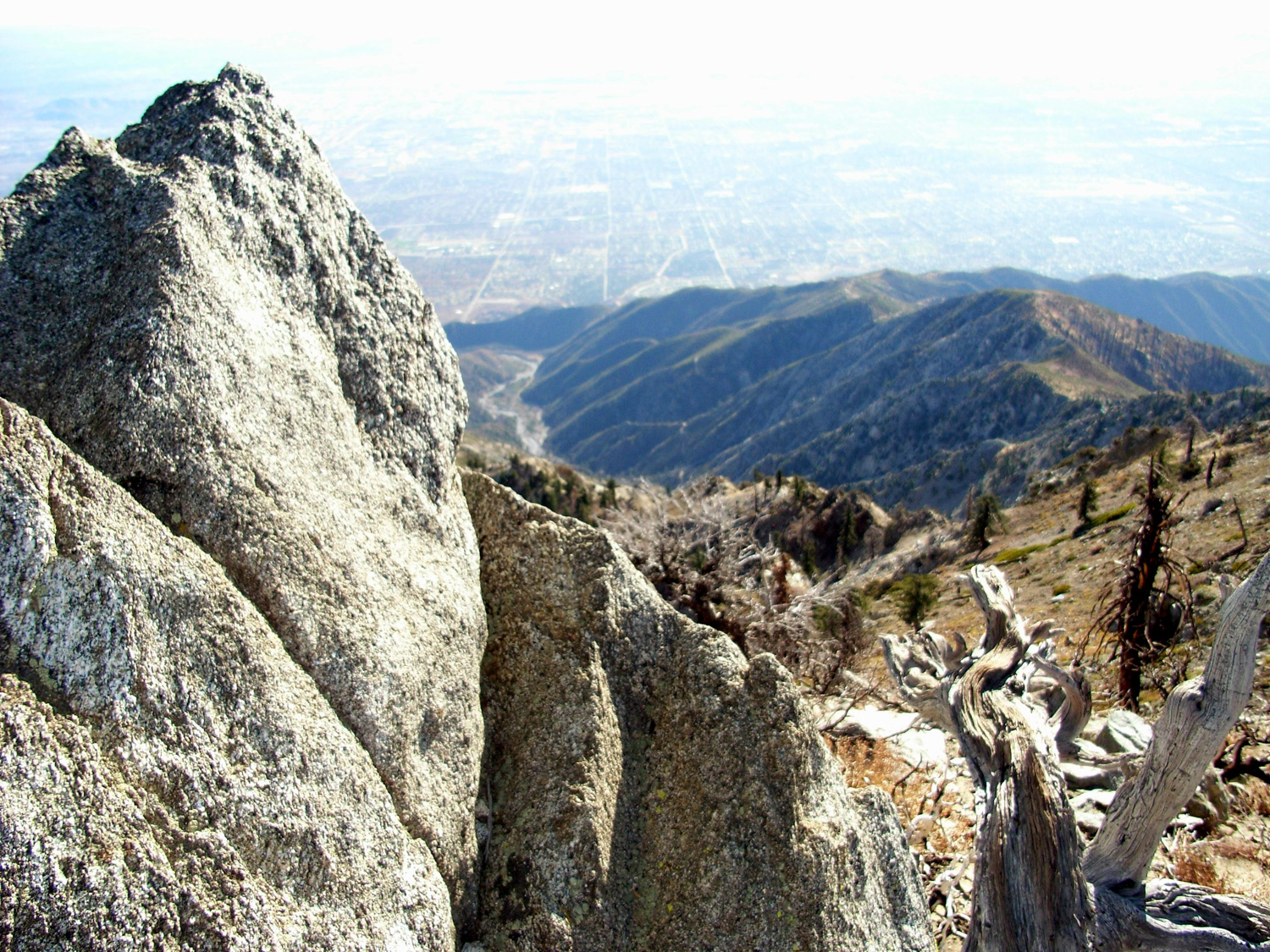 The Icehouse Canyon trail is very well maintained, and generally pretty crowded. After Icehouse Saddle, every spur trail is much more isolated. The Cucamonga Peak trail is in rough shape in spots, but very hikeable. Adventure Pass required at trailhead. Wilderness permit required for travel in the Cucamonga Wilderness.

Chapman Campground is just off the main trail, and Kelly Camp is a bit south of the junction at Icehouse Saddle. Both are walk-in campgrounds that require overnight wilderness permits.

From the 210, take the Mount Baldy exit and travel north. Go through the tiny Mount Baldy Village and take a right at the fork in the road toward Icehouse Canyon. Display your Adventure Pass. Because you are venturing into the Cucamonga Wilderness, you will also need to obtain a free Wilderness Permit from the Mount Baldy Ranger Station.