This is the easiest way to reach Timber Mountain, the southernmost of the “Three Tees” on the Three Tees Trail. Timber Mountain is a prominent, forested peak just above Icehouse Canyon, one of the loveliest canyons in the entire San Gabriel Mountains range.

I opened the door to the Mount Baldy Visitor Center and walked inside. The warm, dark wood interior was a welcome respite from the howling winds outside. The rangers stood behind their desk – a bearded man and blond woman – smiling at me.

“Hi. I’d like a permit for the Cucamonga Wilderness.”

Still smiling, the woman said, “We are not recommending anyone go up there today.”

The man chimed in. “We’re measuring wind gusts at 60 miles an hour. I almost got knocked down today.”

“But of course, we can’t do anything to stop you,” said the woman. Still smiles, that one.

I reached for a ballpoint pen and started filling out our Wilderness Permit. “I’m going to try for Ontario Peak. Is it more windy in the canyons, or on the ridge?”

“It’s windy everywhere.” The man with the beard was not smiling. All gravitas, he.

“We’re not sure. We haven’t been up there.” Still no smiles. “And you’ve got to remember, most of those trails are pretty narrow. One good gust of wind, and you could get swept off the side like that.” He snapped.

The woman smiled and nodded. What was this? Some National Forest game of Good Cop-Bad Cop?

I thought back to my times on the Icehouse Canyon Trail. The trail I remembered was narrow, but not that narrow. And it didn’t have any particularly steep drop offs that were life-threatening. The Cucamonga Peak Trail, however, did.

“Well, I’ll fill this out and talk it over with the hiking partner. Thanks for the tips!”

As I turned to leave, the man called out one last scare – “and be sure to watch out for flying branches and rocks!”

I crossed the street to the Mount Baldy Lodge, where Will was sitting at the bar, waiting for a packable meal. I laid it out for him, mentioning that I’d also found a lower mountain further west in case Ontario was snowed-in. We thought about it for a while. The rangers had me worried it would be too dangerous to hike. Will got his food, turned to me and said, “Well, there’s only one way to find out.”

And with that, we drove to the Icehouse Canyon trailhead. We were going to have an adventure today.

As soon as I opened my car door at the trailhead, the wind shut it back on me. Oh, boy. Getting my bag and shoes out of the trunk was made significantly more interesting by the deafening roar of the wind whipping its way angrily through the Canyon. We tied our packs extra tight, pulled our hats down on our heads, and started toward the Canyon.

As we were walking, a nasty gust forced us to stop and wait. It also set off one of the parked cars’ alarms. This was going to be good.

Thankfully, the early part of the Icehouse Canyon trail was both ice-less and generally windless. It was still windy, don’t get me wrong, but there were none of the breath-knocking gusts that assaulted us in the parking lot. We got our first ice on a set of stairs, but since it was pretty well covered in dirt and mud, it was barely slippery at all.

If you’re trekking this route in the winter, you should always come prepared with the right equipment — in addition to layers, you’ll want something to help increase your traction on partially frozen ground — something like Stabilicers or YakTrax, as well as trekking poles and potentially snowshoes.

At 0.8 mile, stay to the right to keep on the Icehouse Canyon Trail, ignoring the Cedar Glen Trail to Chapman Campground.

The water usually fizzles out in Icehouse Canyon around 1.2 miles, and you’ll hit the wilderness boundary about 0.1 mile further down the trail. Early on in the trail, we passed a young-looking group of hikers coming back down. We asked how the wind was at the saddle. One of the men got a worried look in his eye.”We didn’t make it up there,” he said. “We got close, but the wind – it’s blowing you right off the side. Too much for us.” They continued, slightly-panicked, to the trailhead. We pressed on.We made quick time up the trail to the Cucamonga Wilderness border, where we got a nice view of the now-almost-fully snowed-in north face of Ontario Peak. The further north we went, the stronger the wind seemed to get. And as the trail was also more shaded, we were running into more and more patches of snow and packed-in ice in our path. Here, we quickly discovered that our hiking boots didn’t offer too much in the way of friction. Yeah, not so much. Taking these parts of the trail very, very slowly, I looked at it as just another form of boulder-hopping. I’d try to find rocks, old footprints, or patches of dirt and pine-covered ice that could offer a quick foothold and slowly, carefully made my way up. There were several times we lost our footing, but neither of us fell on the ascent. Which, looking at pictures of the trail, is pretty incredible. Looking off the side of one of these sections of ice, Will noticed an area that had amassed a healthy snowdrift. “Want to go down there and check it out?””Why the hell not? I still haven’t gotten my Winter Fix.” And with that, we were on our asses, sliding down a layer of ice to the drifts below.I dipped my hands into the snow and stopped to pose for a picture. Will’s dog, Dingo, also seemed like she couldn’t get enough of the snow. Born and raised in the Sunbelt, she’d never seen this stuff before, and had a great time discovering how she could dig in it, slide on it, and drink it.

As we got close to Icehouse Saddle, the winds started picking up again. This, combined with the icy trail, made for some interesting hiking postures, that’s for sure. Lots of bowed legs and outstretched arms on my end, given just the right amount of silliness by the occasional flailing to keep balance.Eventually, we made it to Icehouse Saddle, and met up with a pair of Australian hikers decked out with trekking poles, crampons, and all other sorts of equipment that will probably end up on my credit card statement pretty soon. They were coming down from the Timber Mountain trail, and we asked them how the weather was.

They told us the weather was fine up on Timber, but they’d gotten the stuffing knocked out of them coming up Bear Canyon. We traded “Danger in the Wind” stories, but the Australians had us beat. The husband almost got himself blown down a ravine.

Like us, they had their sights set one of the bigger peaks, but opted for the calmer environs of Timber Mountain instead. Checking out the trails, we noticed the route to Ontario Peak was on the mountain’s north face for quite some distance. Generally, the north sides of the San Gabriels are the ones that keep colder longer, and this looked to be no different. We looked north toward Timber Mountain, its trail on the south face and completely free of snow. And thus, our plans were altered.

The winds started whipping around Icehouse Saddle, so we climbed up the Timber Mountain trail a bit, found a log to sit on, and ate our lunches. In clear view, of course, of our former destination. Oh well. It’ll have to wait until the snow melts. Or until I buy crampons.

Just under a mile of dry, easy-graded hiking and we were at the sign to Timber Mountain: I’d forgotten that last .25 miles is a relentless, nearly-vertical slog up to the wooded summit, but was quickly reminded by my legs. They weren’t very happy about it. But soon, we were at the top, signing names and telling tales in the register, which still bears the mountain’s former moniker — after the name of the family that tended the Icehouse Canyon Lodge for many, many years. From the summit, we took a short stroll over to the edge of the north face, where Dingo played in the snow some more, we got pelted by more winds, and we got a great view of the Baldy Bowl and Telegraph Peak. After taking in all the scenery, and getting our lungs filled (sometimes without asking) with the mountain air, we turned and made our way back down into Icehouse Canyon. 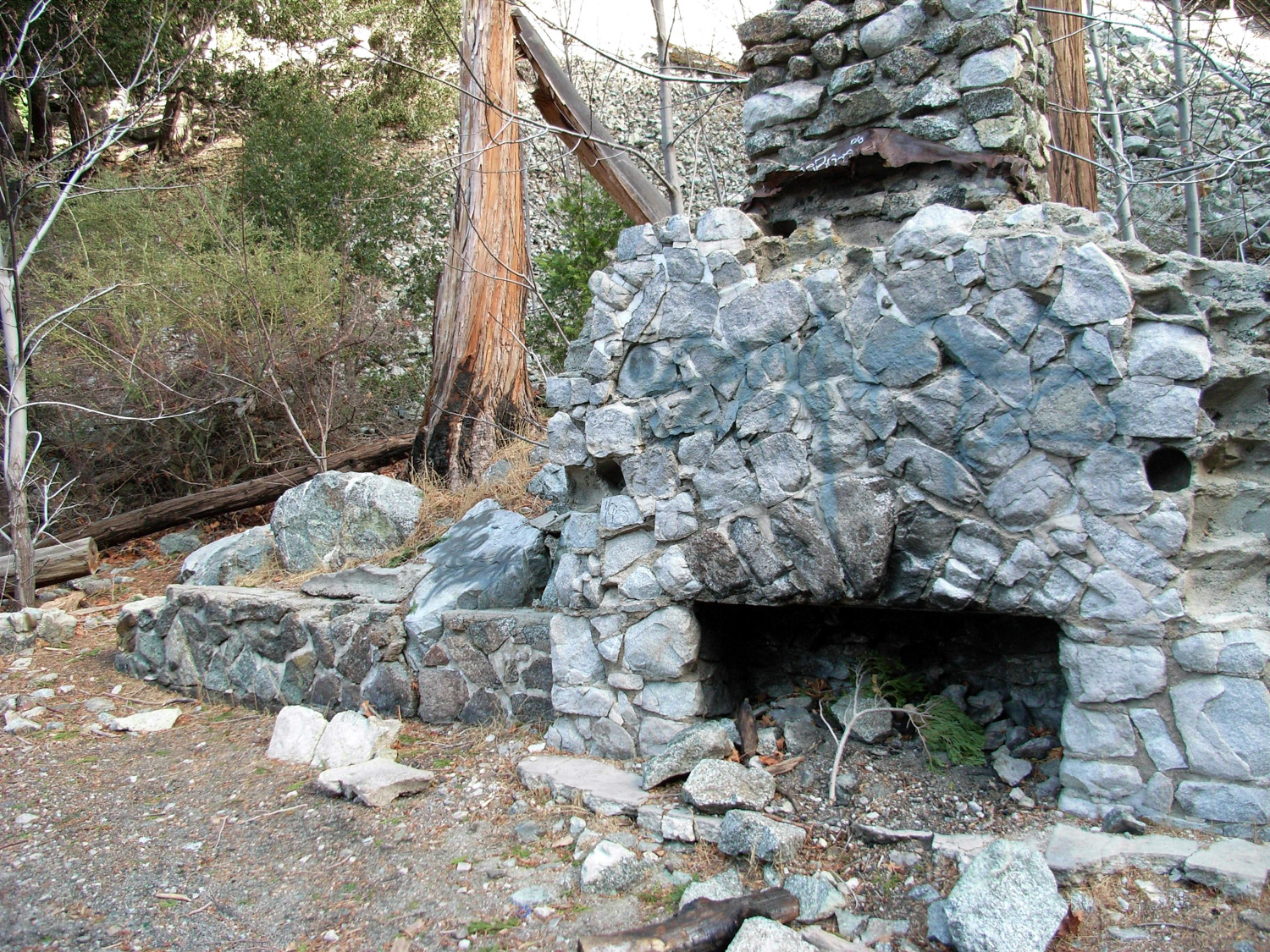 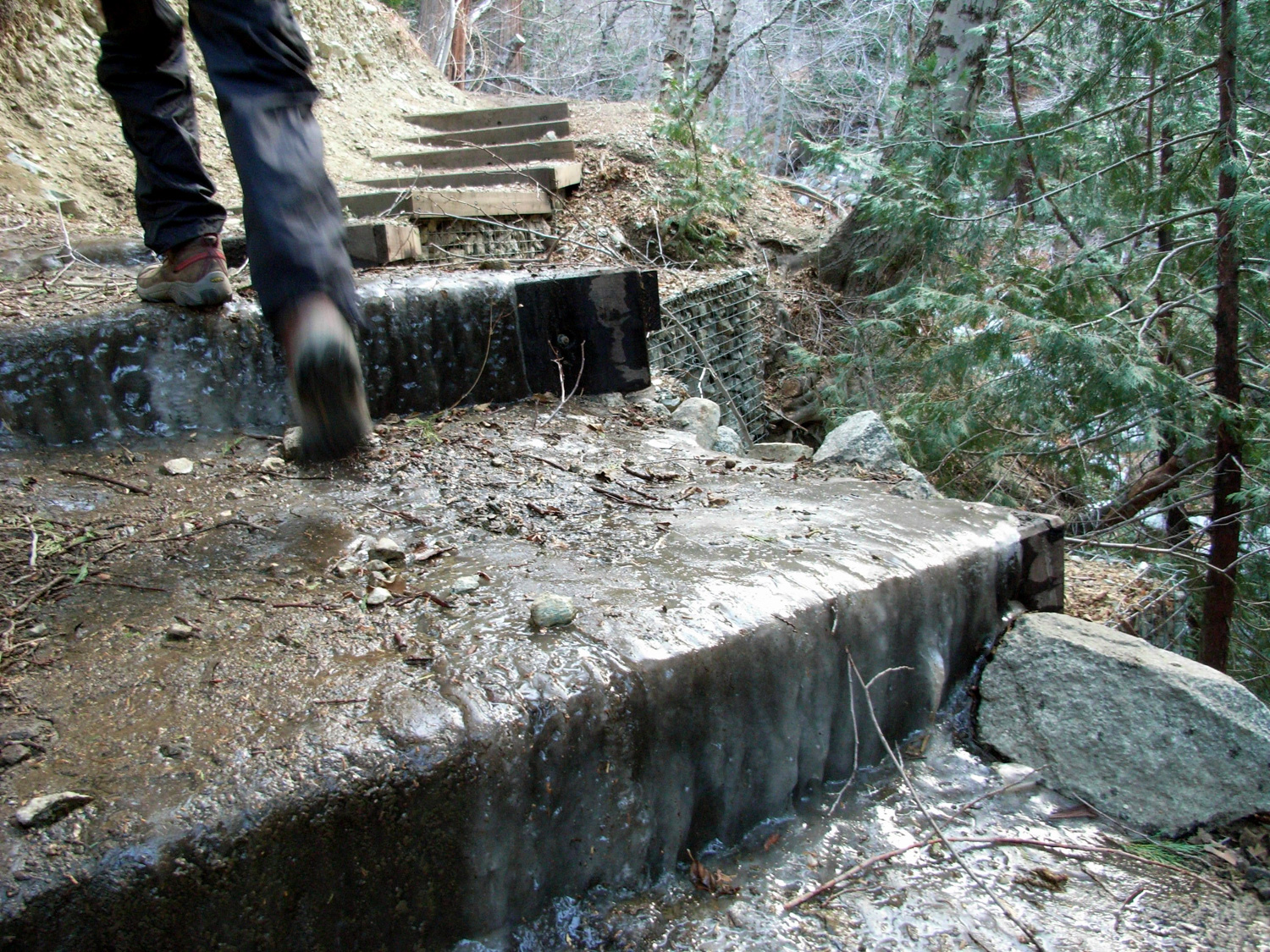 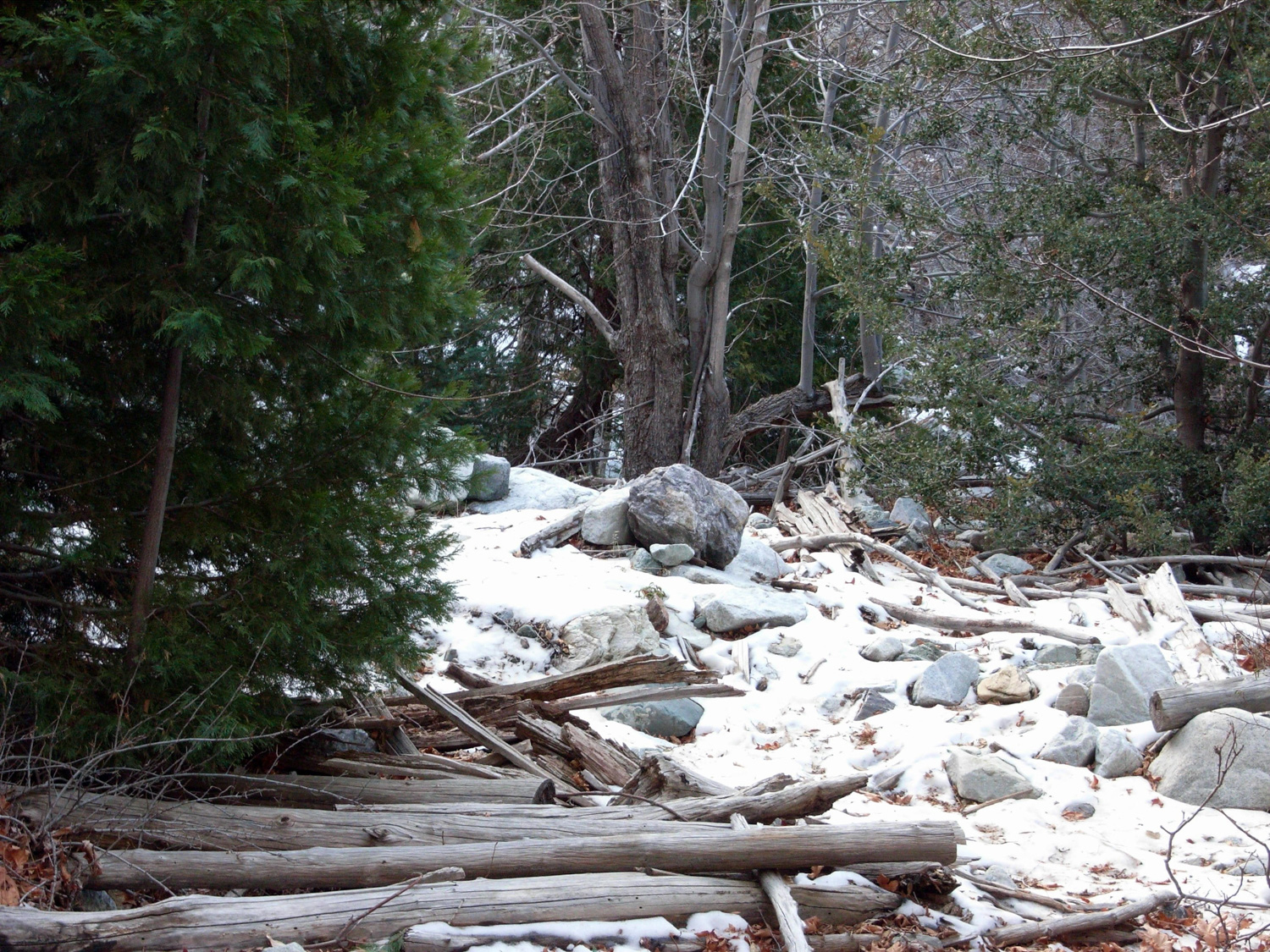 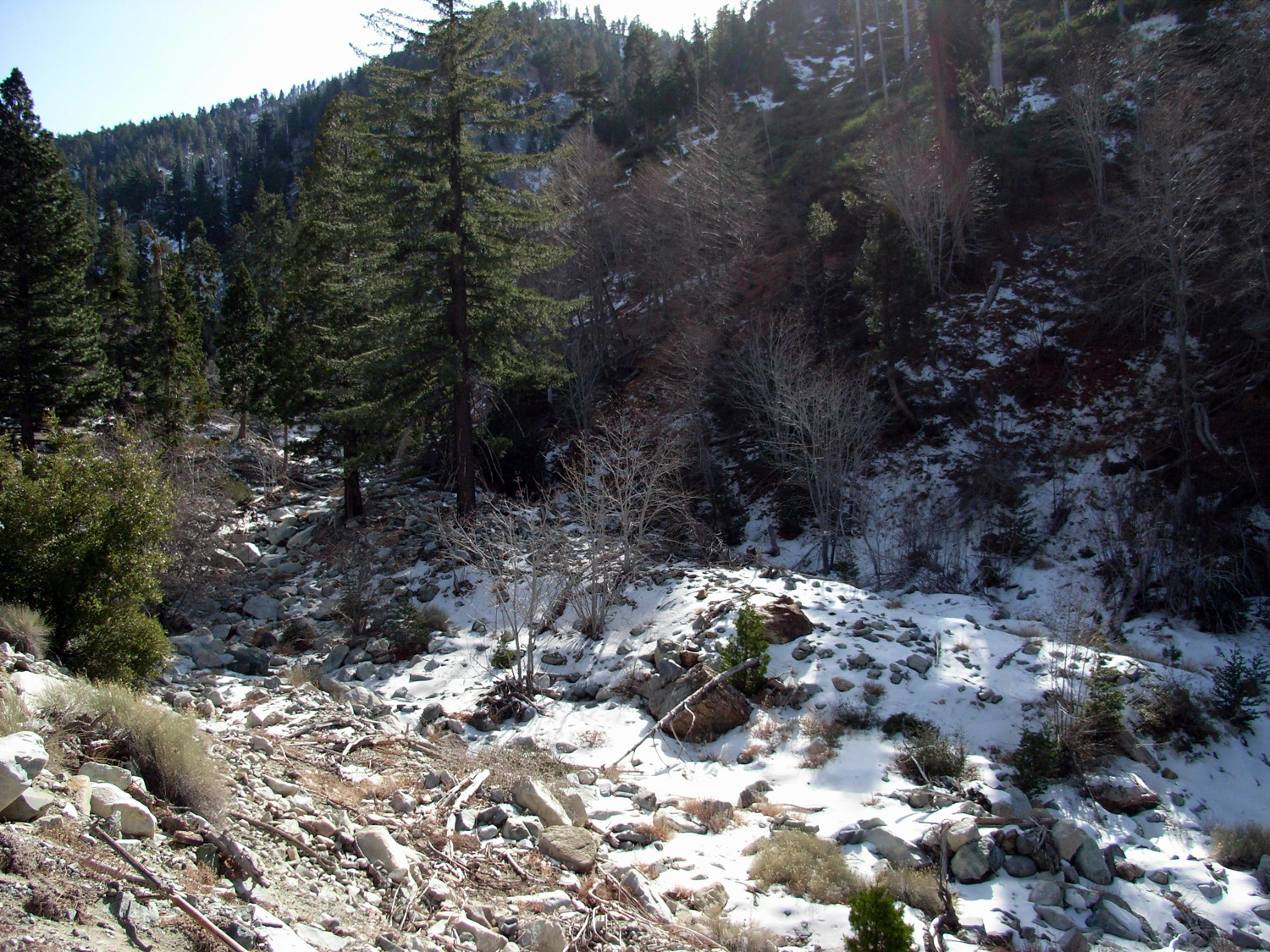 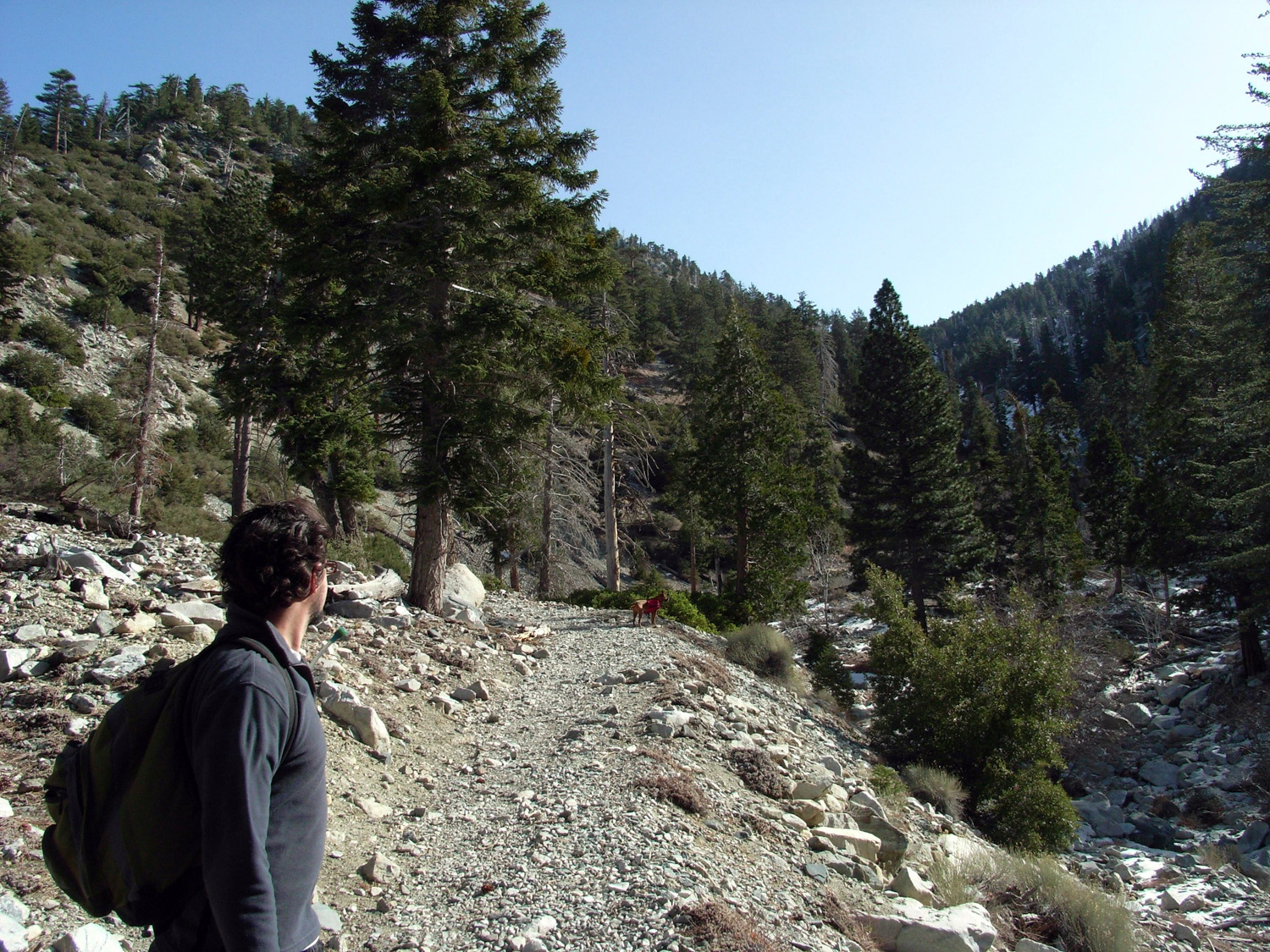 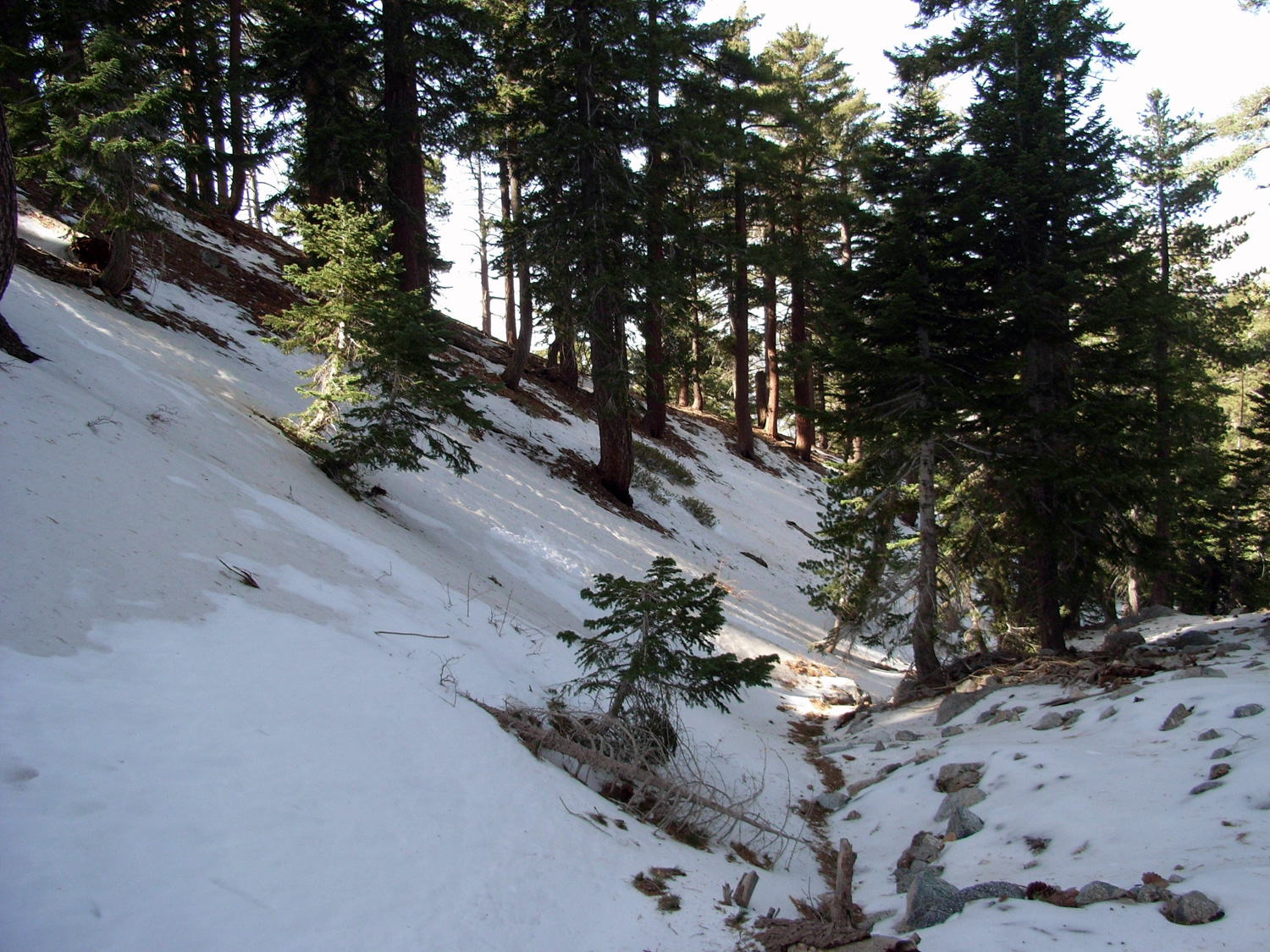 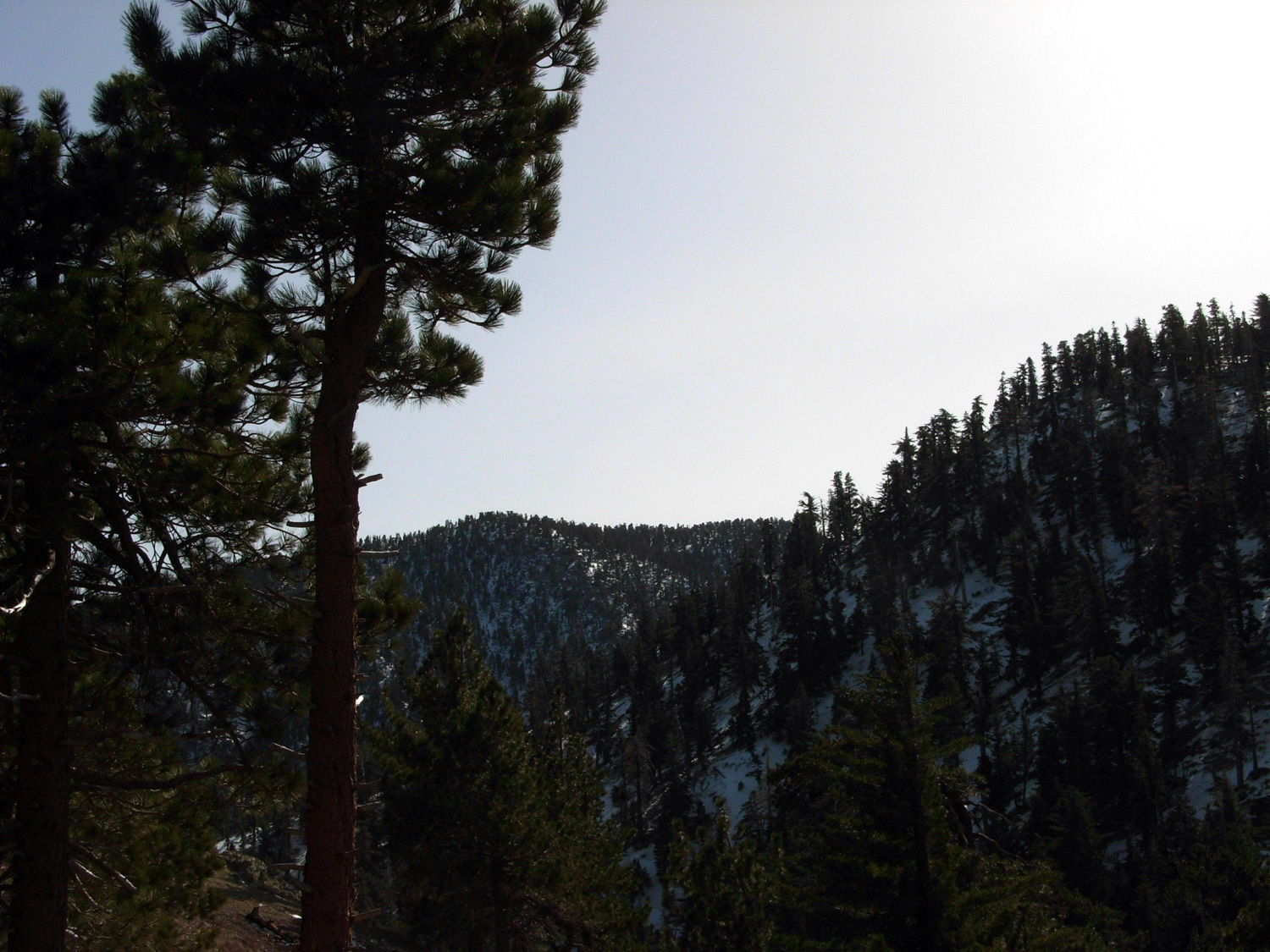 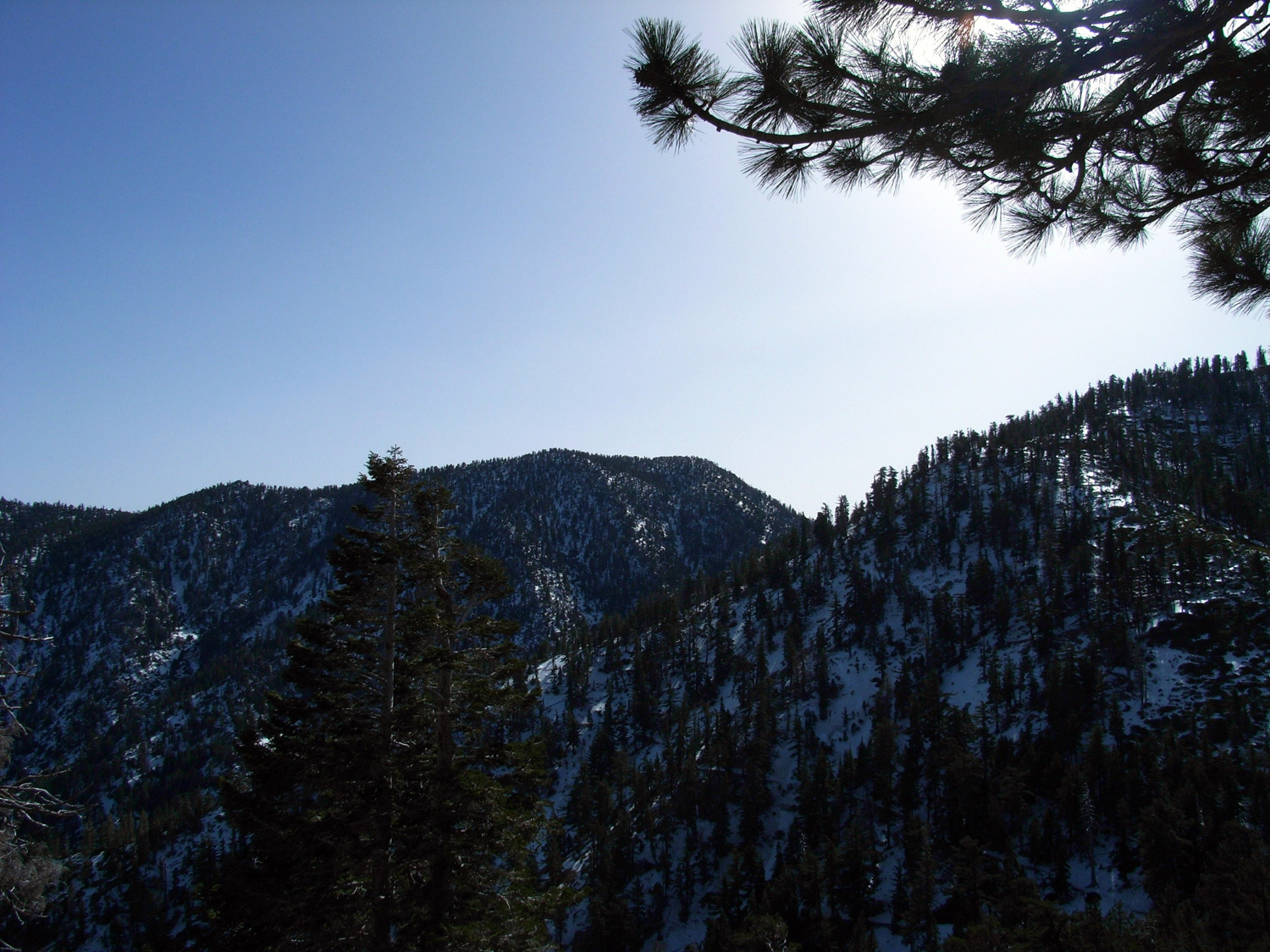 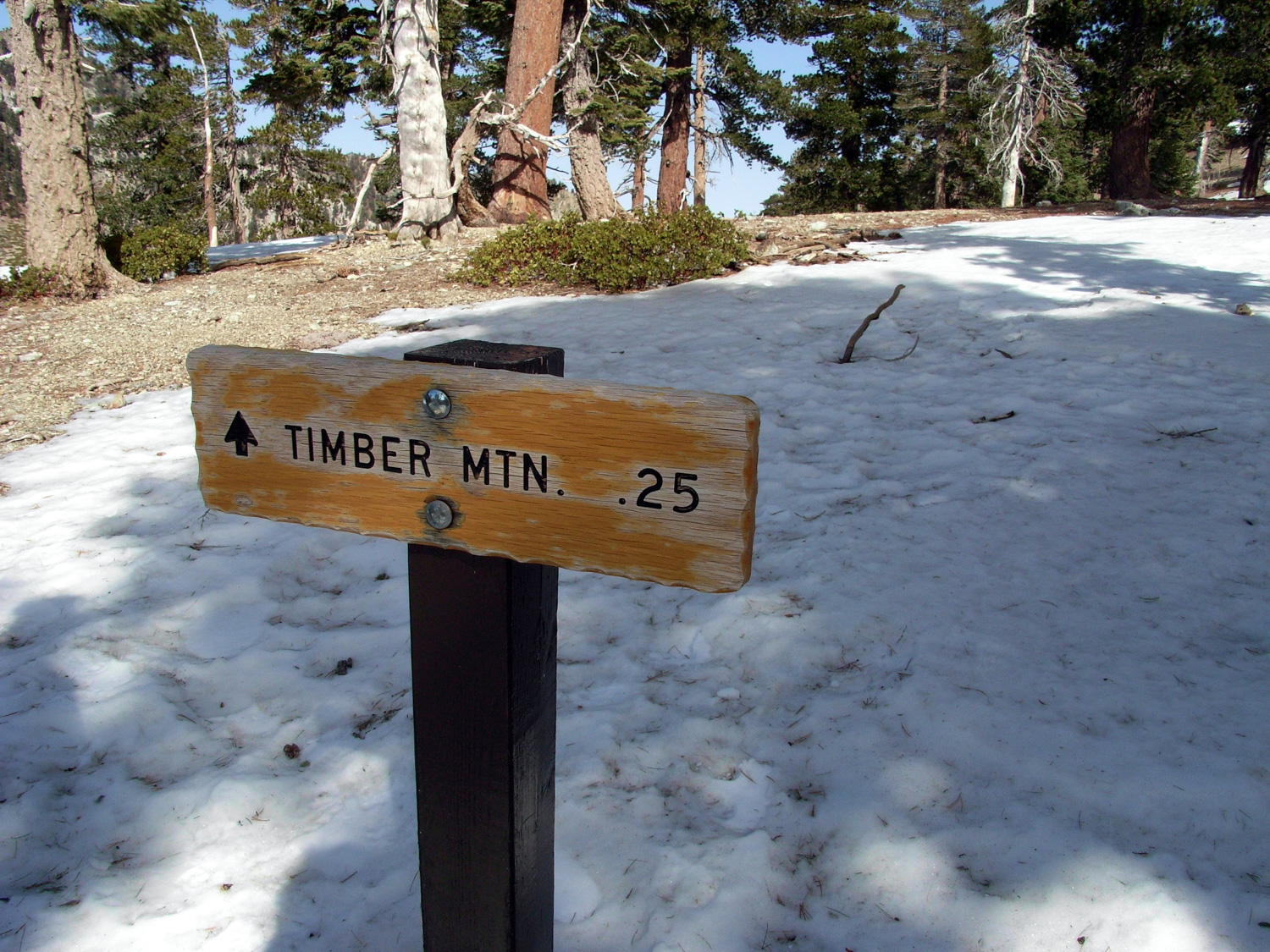 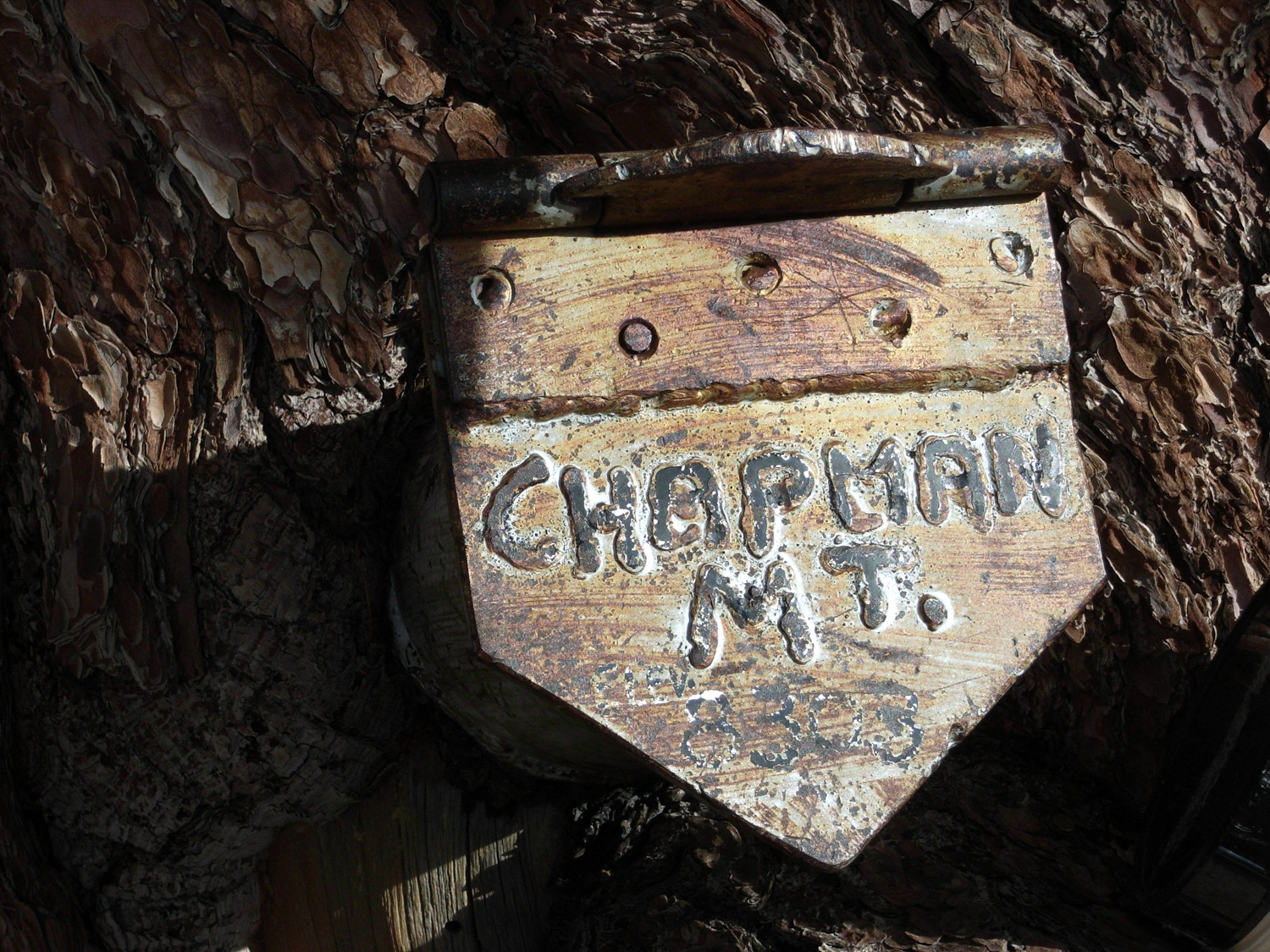 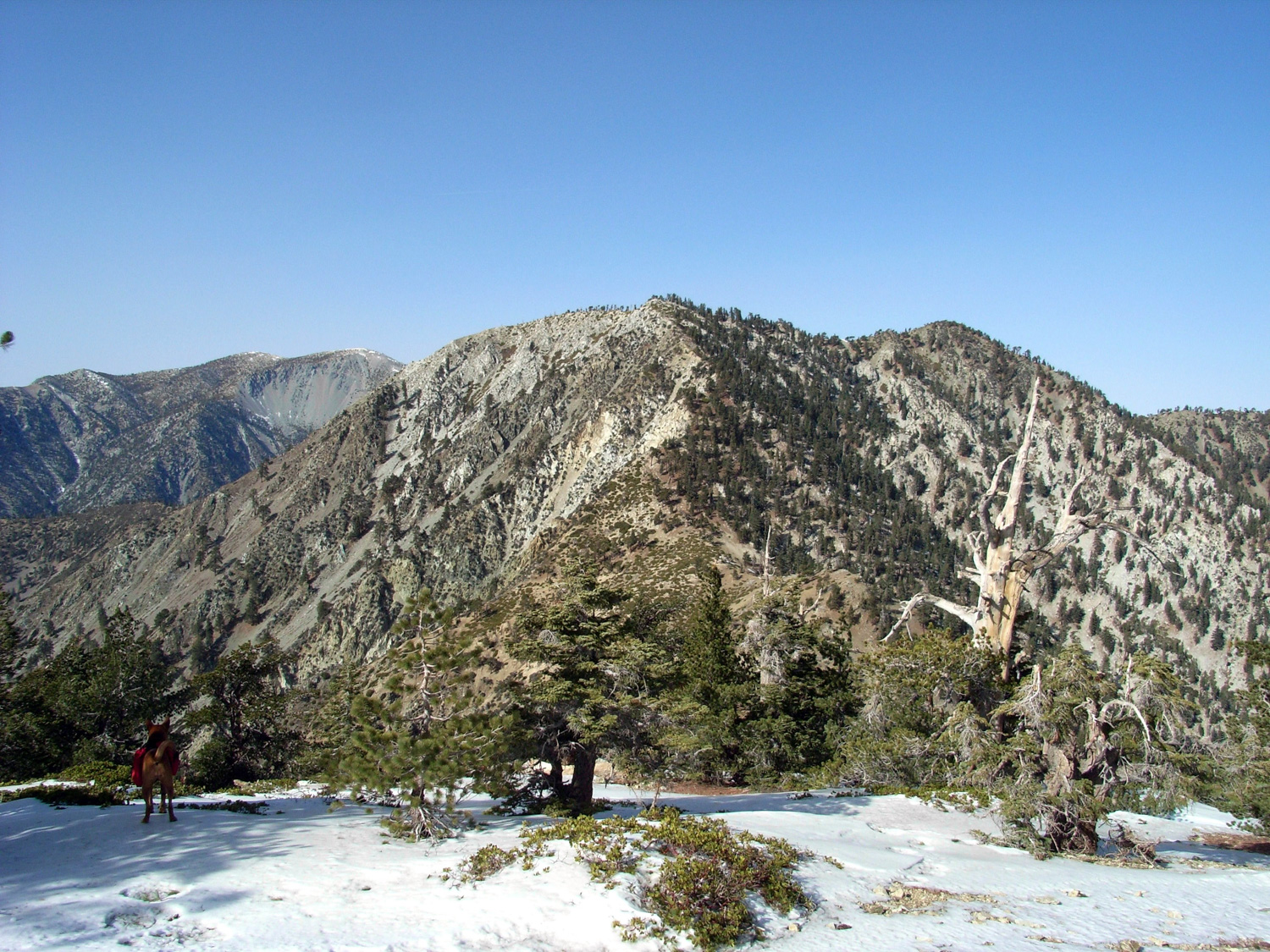 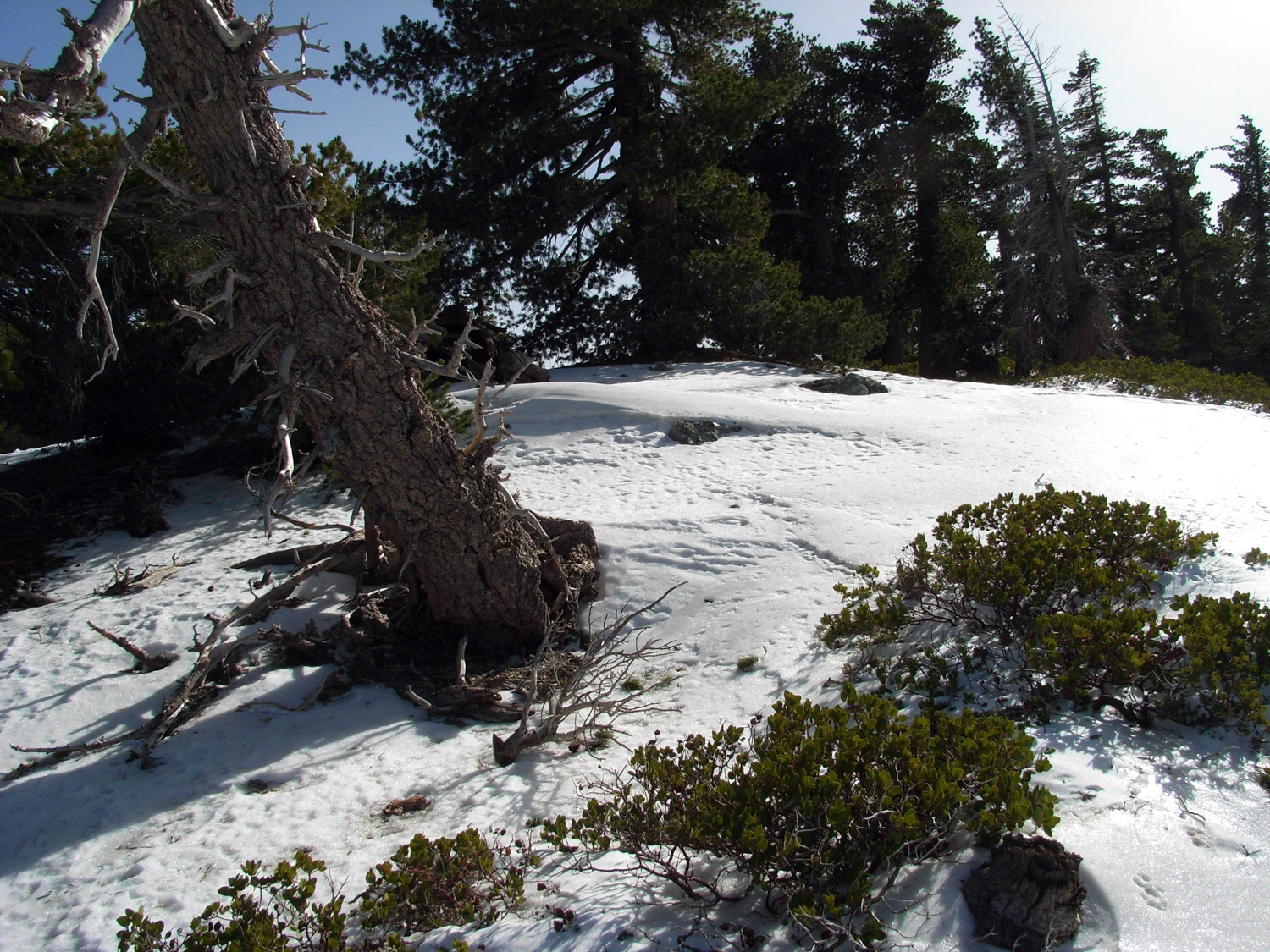 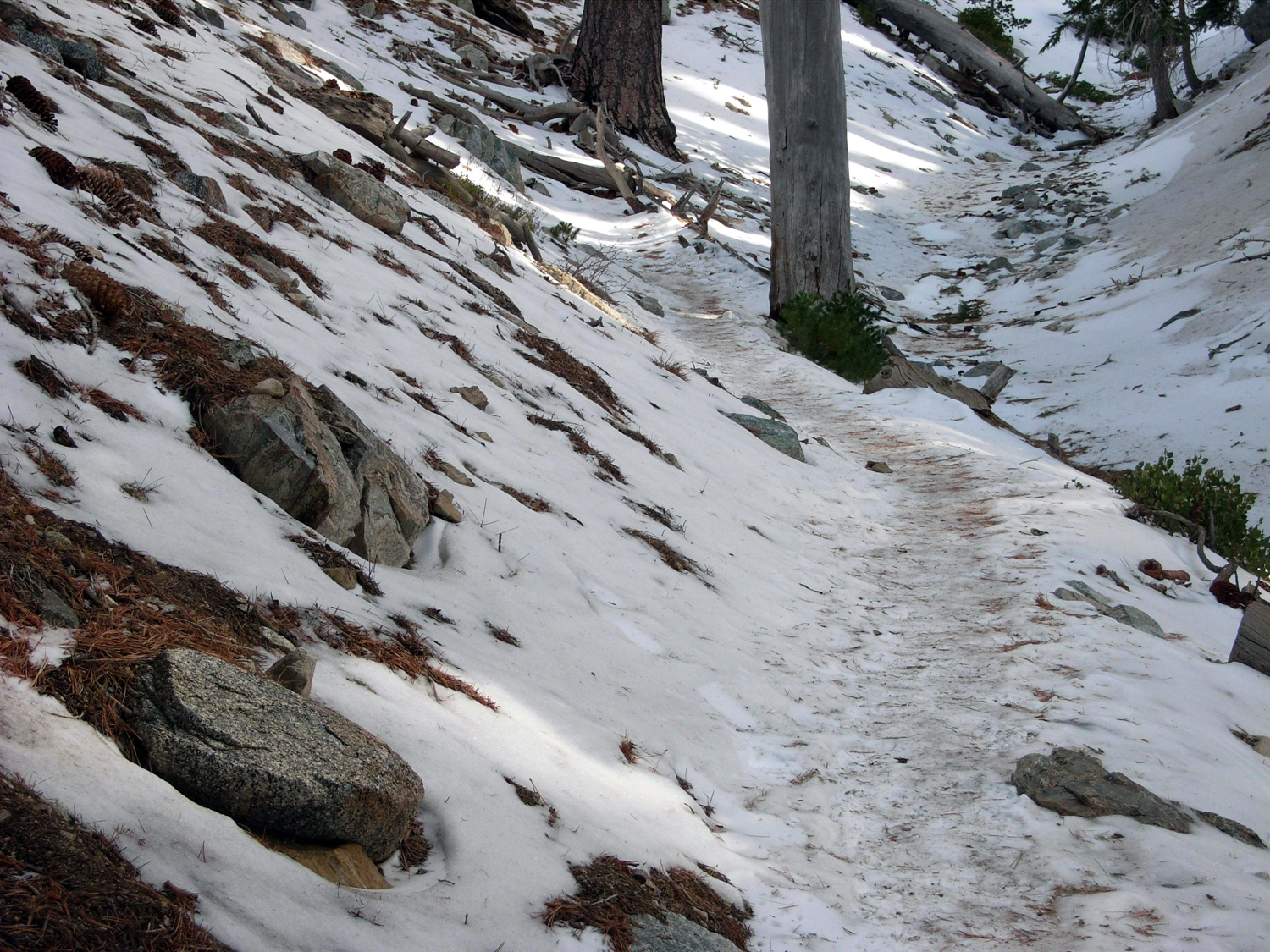 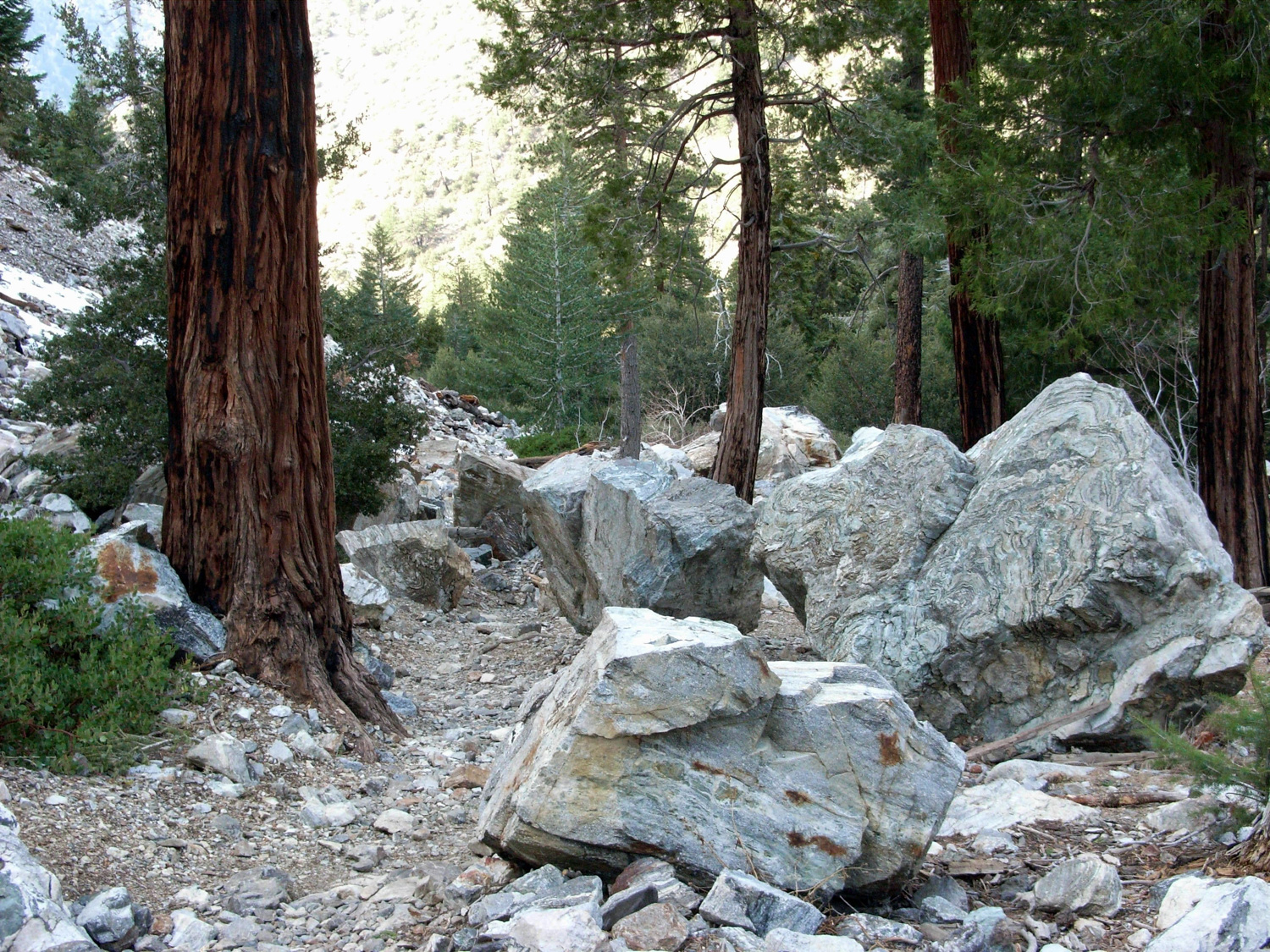 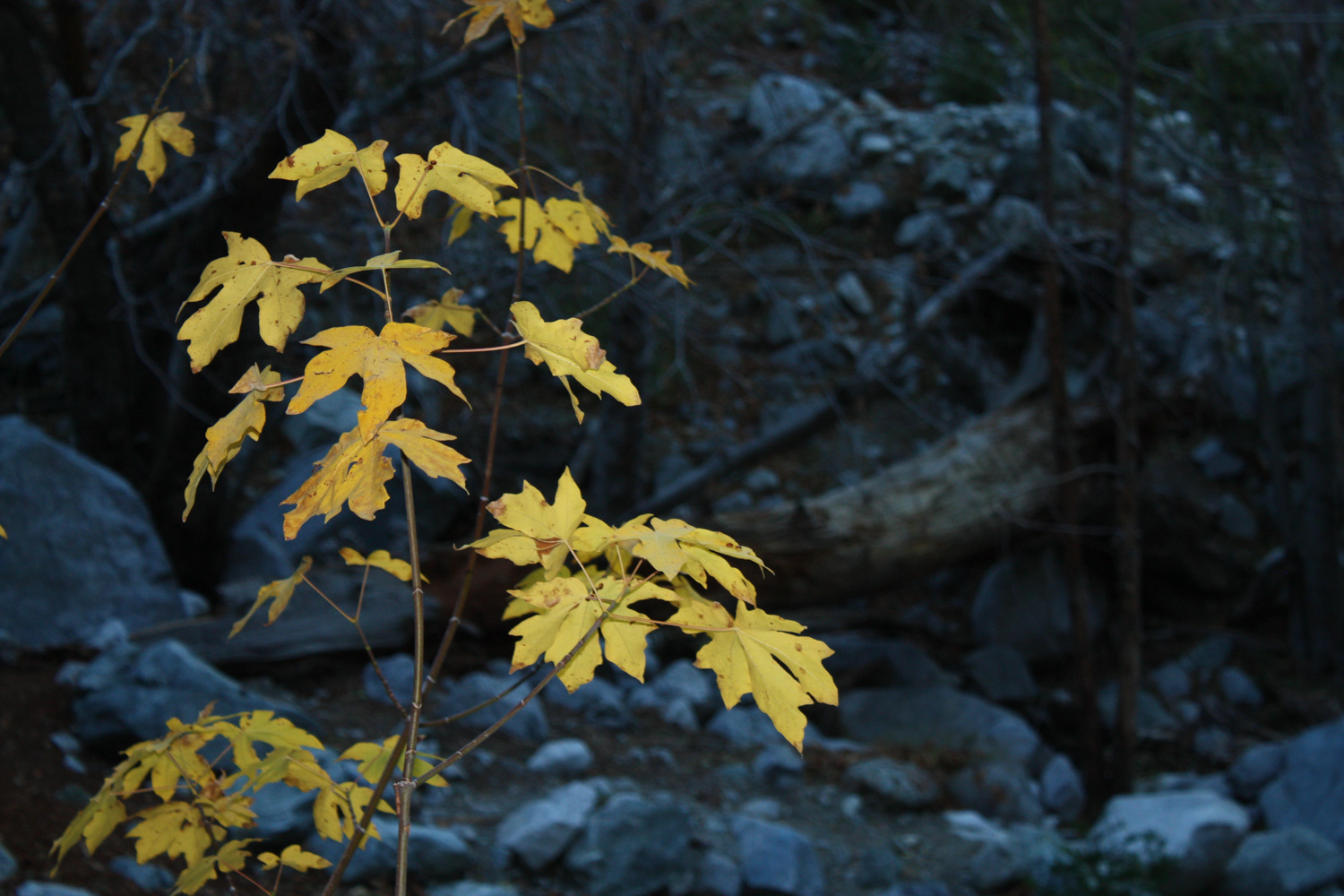 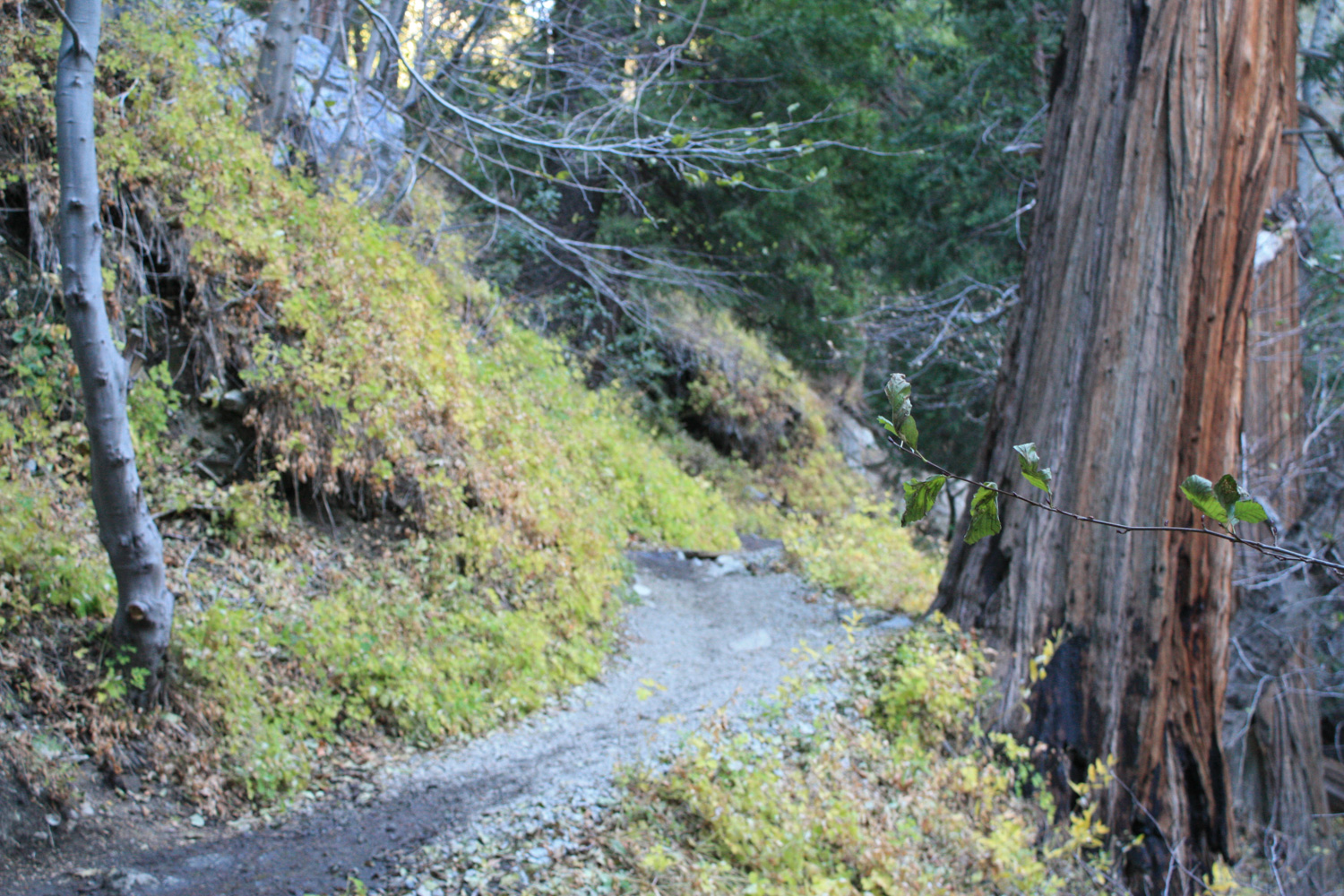 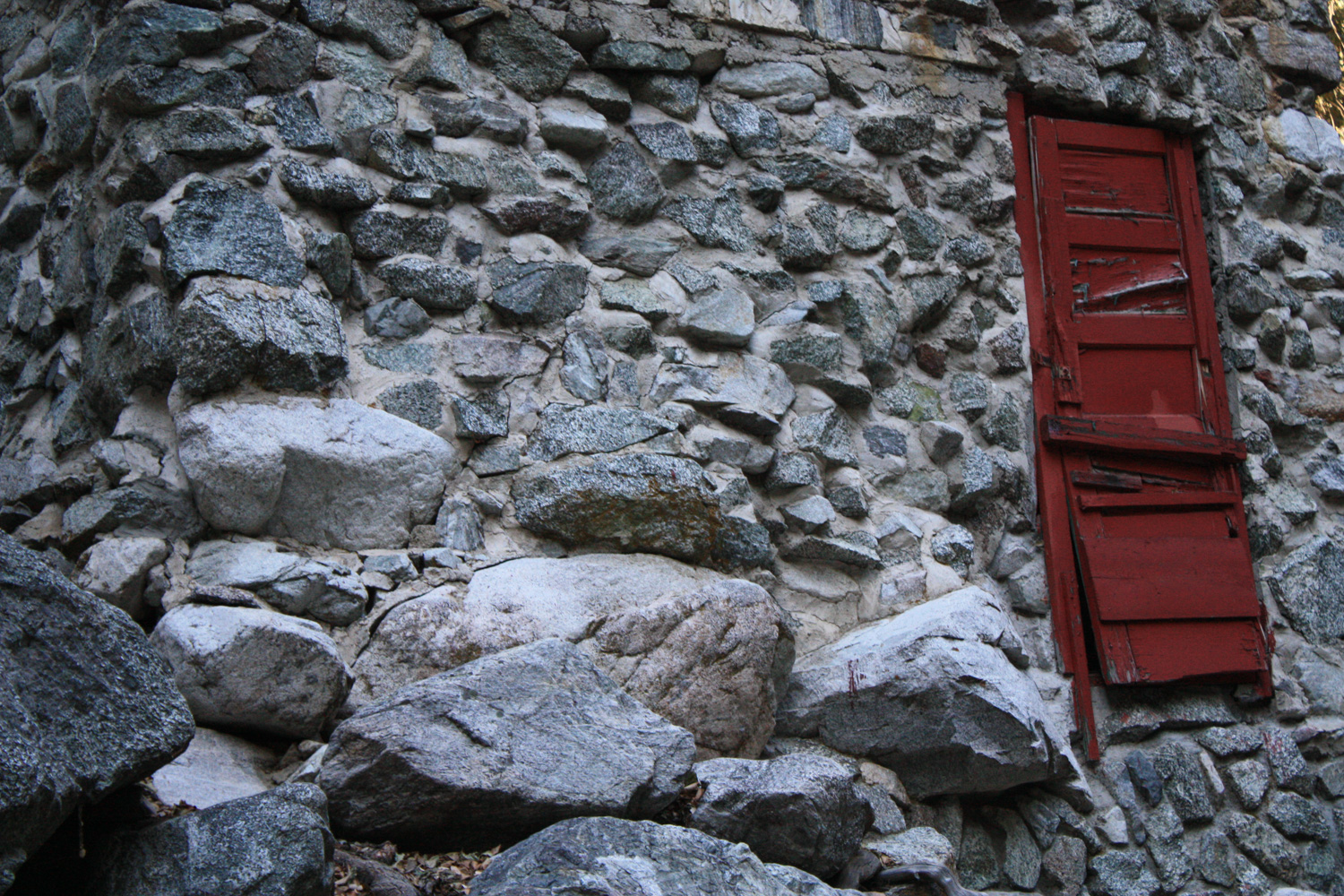 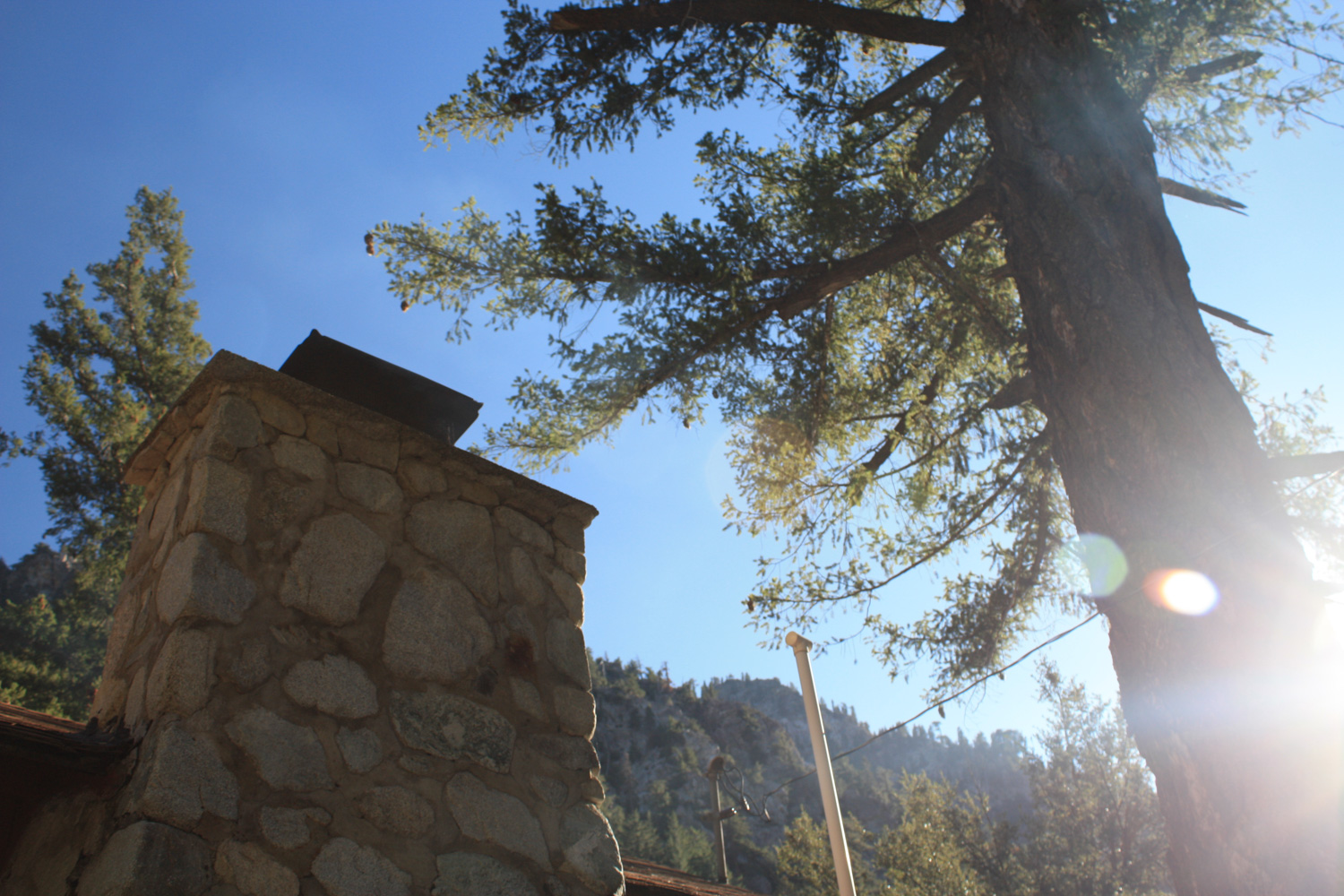 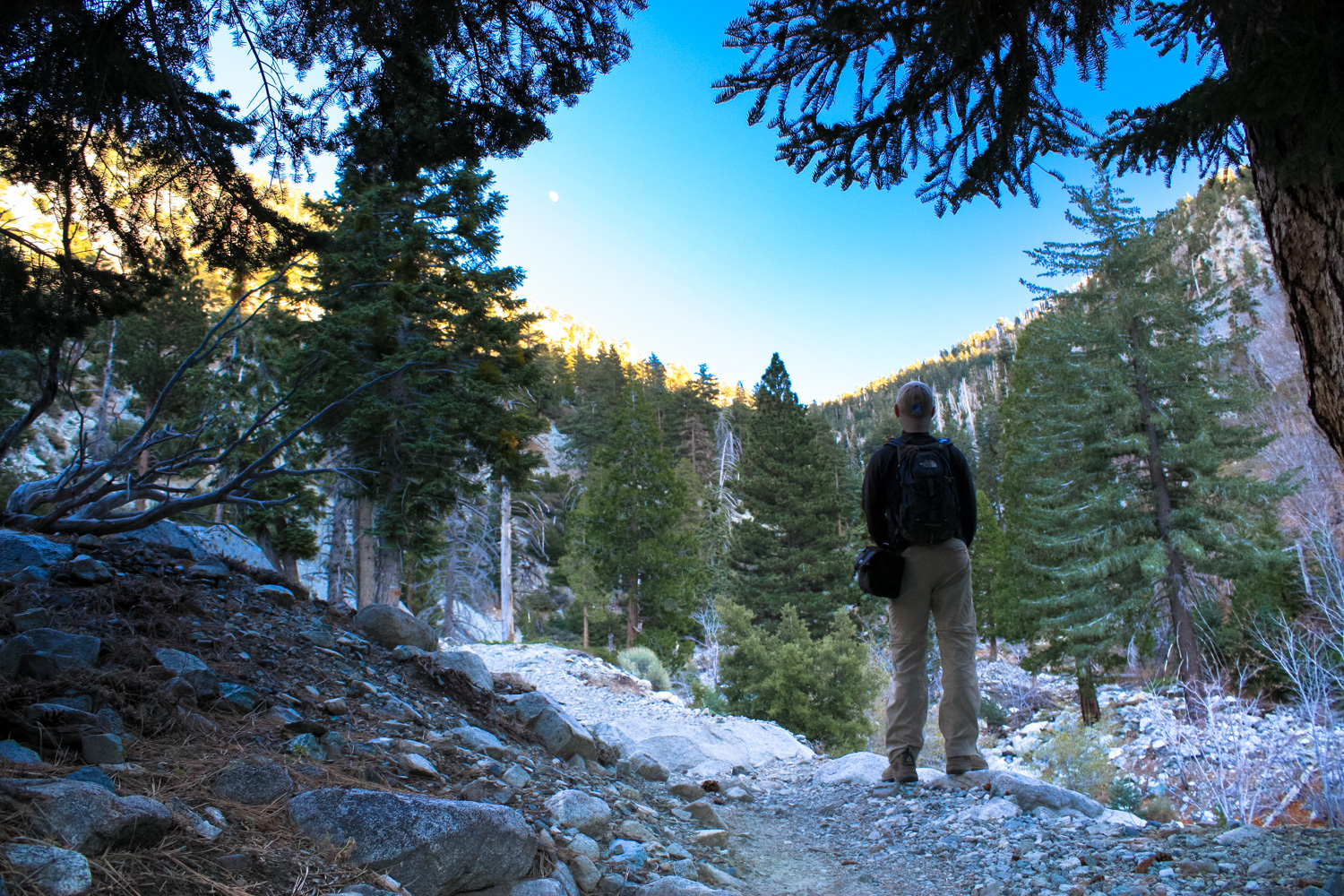 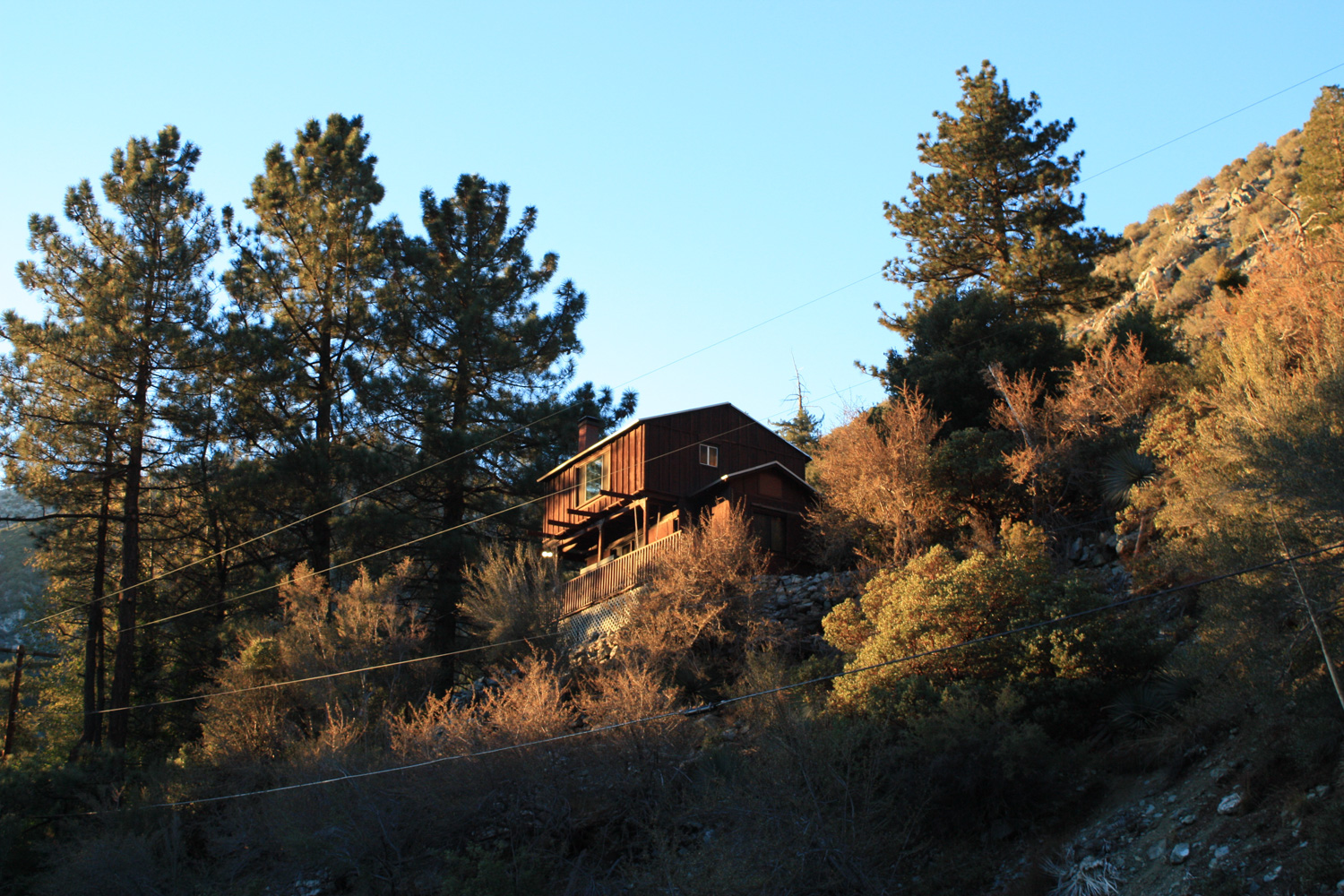 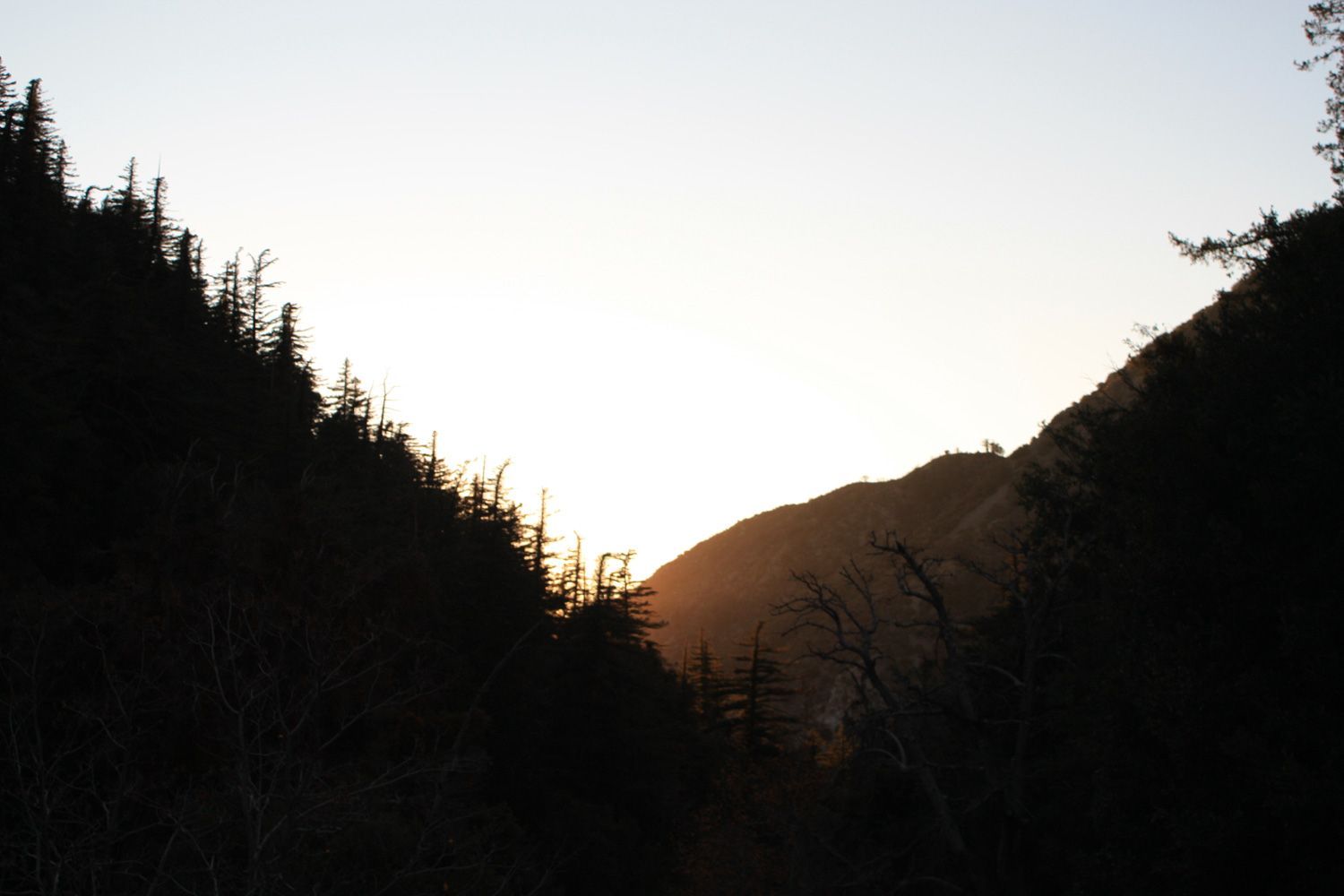 Excellent. Well marked through Icehouse Canyon and up to Timber Mountain. The final sections of both trails are very strenuous. If we have a wet winter, expect snow and ice on this trail well into the spring and exercise appropriate caution and gear-packing.

Chapman Campground is just off the main trail, and Kelly Camp is a bit south of the junction at Icehouse Saddle. Both are walk-in campgrounds that require overnight wilderness permits.

From the 210, take the Mount Baldy exit and travel north. Go through the tiny Mount Baldy Village and take a right at the fork in the road toward Icehouse Canyon. Display your Adventure Pass. If you are venturing into the Cucamonga Wilderness, you will also need to obtain a free Wilderness Permit from the Mount Baldy Ranger Station.