UPDATE 8/15/2018: The trails on this route have been heavily impacted by the 2018 Holy Fire. It will be quite some time before the vegetation recovers, and it is currently unknown when the trails will re-open.

We at Modern Hiker have been committing an egregious sin for far too long. We have brought you some of the best trails in Los Angeles County, Riverside County, San Bernadino County, and San Diego County. We’ve ventured far afield to the Sierra Nevadas, Utah, Arizona, and beyond to cover the best trails in the western states. And all along, one of the most spectacular hikes in SoCal has sat there right under our very noses. . . or, at least, 5,689 feet above our noses. 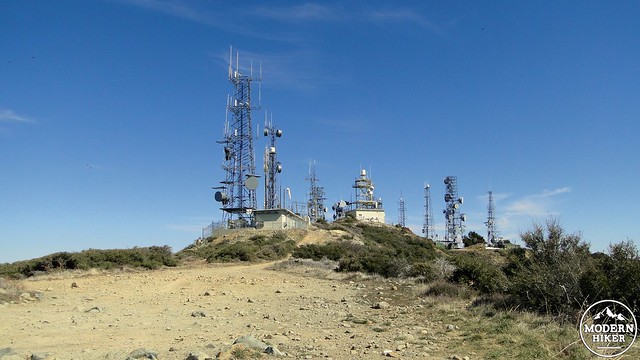 The summit of Santiago Peak

Santiago Peak, frequently referred to as Saddleback Mountain by locals, is not just Orange County’s high point. It is the centerpiece for the prominent Santa Ana mountain range dividing the coastal communities from the Inland Empire. The Santa Anas may not have the soaring heights and coniferous forests of the mountains in the surrounding counties, but its position in the middle of the greater Los Angeles metropolitan area provides superlative views of every major geographical and most urban landmarks from the L.A. Basin to southern San Diego County.

Looking north and east at the Three Saints

On views alone, the hike up to Santiago Peak via Holy Jim Canyon can be considered the premier hike in Orange County. It is also a very difficult hike, with 15 miles of distance during which you will lose and gain 4,000′ of elevation. Getting there is no picnic either, as the trailhead lies near the end of a rutted and unruly dirt road that passes through the cool shade of Trabuco Canyon. However, if you are up for the challenge and in the mood for adventure, you will find that this hike disappoints neither in the views nor the adventure categories. 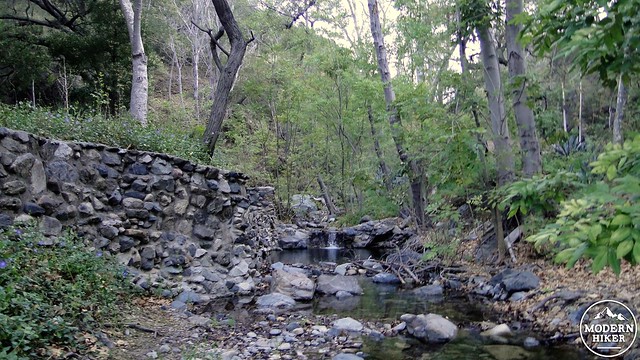 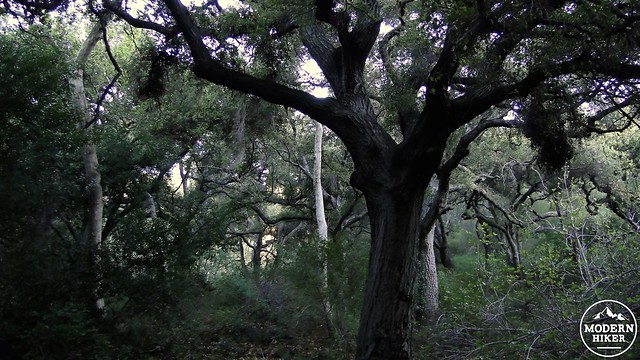 The namesake of Holy Jim Canyon received his name for his prodigiously dirty vocabulary. Cussin’ Jim (later referred to as Holy Jim because people of that time thought that even the word “cussing” was in the Danger Zone) homesteaded in the canyon where he raised figs and honey, which he would sell to folks in the nearby communities. The figs and the honey have both left their own legacies, as the vegetation around the stream is choked by rampant growths of fig trees that still produce fruit. 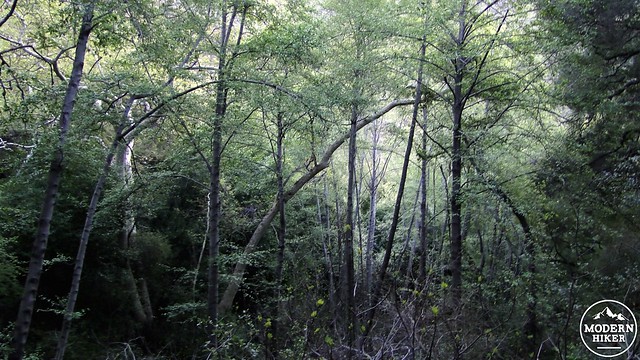 The honey is a sadder story. Holy Jim came out of his cabin one day and observed that something had been raiding his beehives. At the time, the Santa Ana Mountains and nearby regions played host to a declining population of grizzly bears. After Holy Jim realized that it was a grizzly that was getting into his honey, he and a posse hunted the bear down for several days and finally killed it in the area above Trabuco Canyon. It was one of the last grizzly bears in the state. 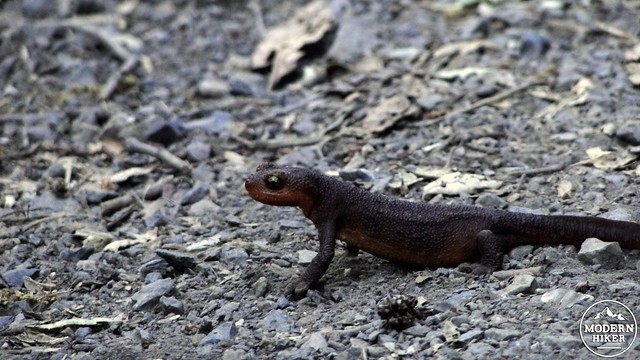 The trail will follow the creek bed as it bends to the left toward Holy Jim Falls. Along the way, you will travel beneath alders, live oaks, bay trees, maples, and sycamores that will remind you more than once of Santa Anita Canyon. Depending on the time of year, the creek will flow with water cascading down the south slope of Santiago Peak from a nearby spring. Following a good rain, you will likely encounter Pacific salamanders making their slow, steady, mindless ways to some unknown destination. The little guys are impossibly cute. 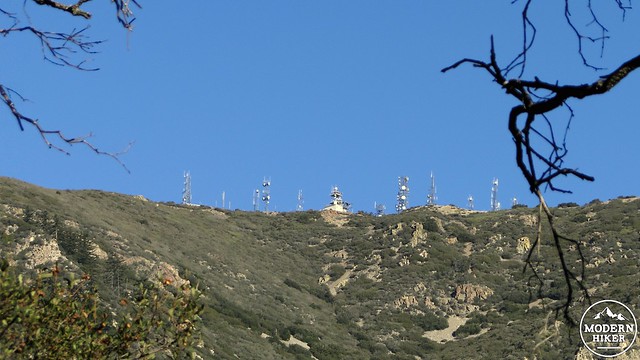 Santiago Peak after rising out of Holy Jim Canyon

Before you reach the Falls, the trail to the peak will branch off to the left and begin to switchback along the western wall of Holy Jim Canyon as it begins to climb in earnest. With a slight pang, you will leave the cool, creek-side shade to enter sun-baked slopes carpeted in chaparral. Right off the bat, you will be treated to a view of the peak, which is now tantalizingly close in linear distance but still 6.2 hiking miles and 3,500 vertical feet away. 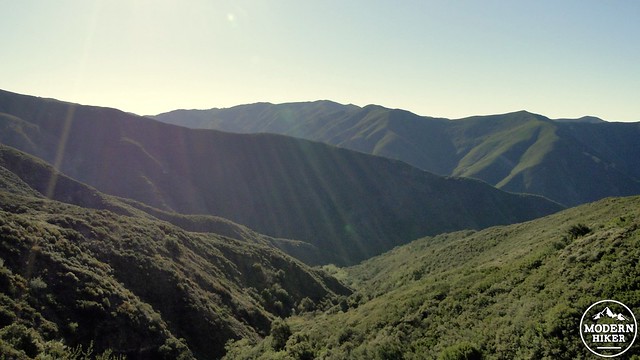 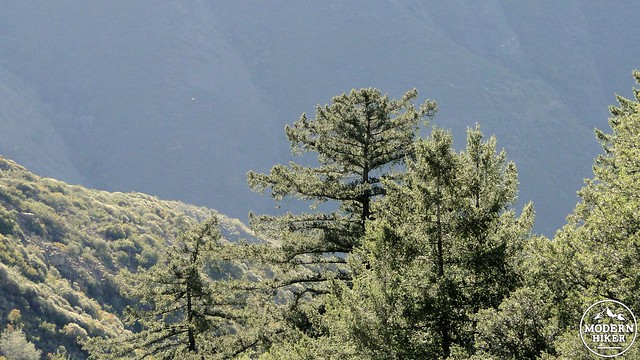 Bigcone Douglas firs above the canyon

For the next 2.3 miles, you will diligently make your way along the western wall of Holy Jim Canyon. Views of the canyon behind and below you gradually become more impressive, but there’s no denying that this stretch of trail is a slog. It gets a bit more interesting as you approach the spring that also sources Holy Jim Creek, which is surrounded by a dense thicket of woods. Cross the rocky patch after the spring and commence your climb up the northern reaches of Holy Jim Canyon on the approach to Main Divide Road. 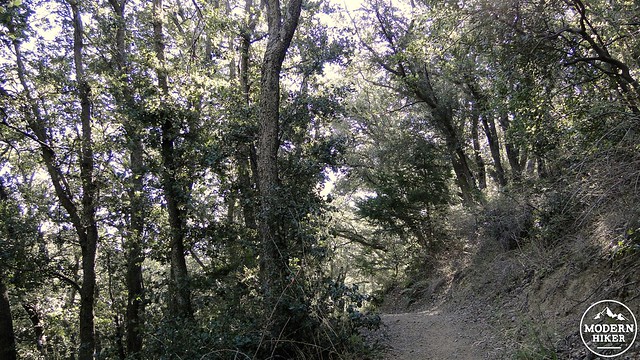 Before you reach Main Divide Road, you will have the pleasure of dropping into a ravine that is densely wooded with bigleaf maple, canyon live oak, and bigcone Douglas fir. This is a wonderful spot for a break after all of the hard work of the previous 5 miles. From this point, you will leave the shelter of Holy Jim Canyon behind for a gradually expanding view over coastal Southern California. 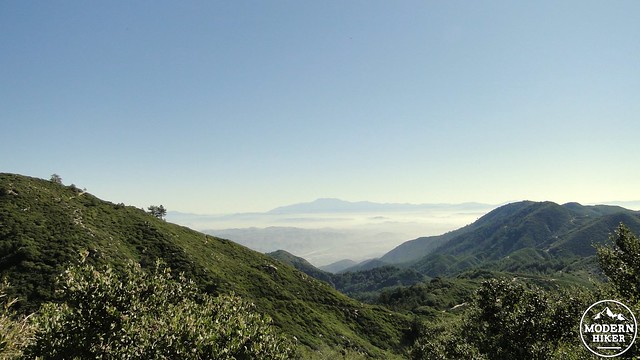 Mt. San Jacinto in the distance 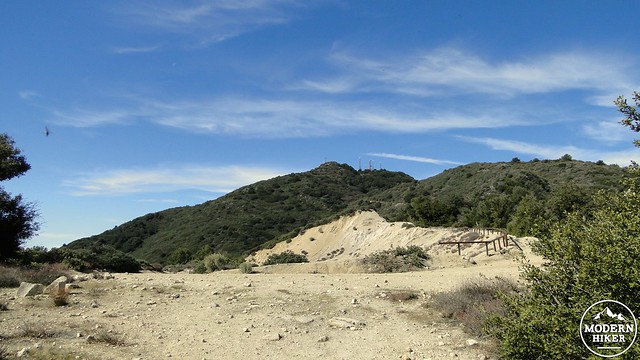 The big bend before the last push to the summit

You will encounter one of the toughest stretches of climbing during the next .6 mile as you follow Main Divide Road up the shoulder of Santiago Peak. You will gain the edge of a new ridge at a wide clearing in the road before a hard left turn that commences the final approach to the peak. From here, you get a full reveal of the land to the north and east of your location. The Three Saints will undoubtedly draw your gaze time and time again as they loom high above the blanket of haze that settles over the Inland Empire. 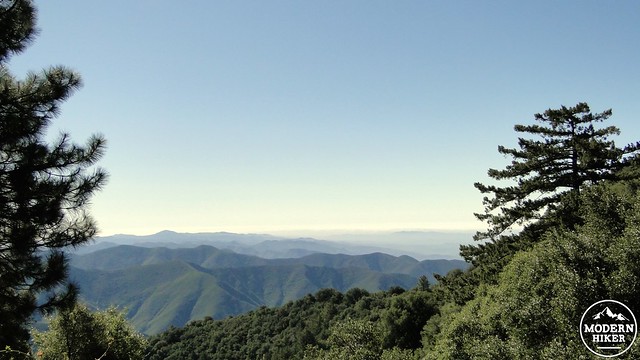 From here, you have reached the home stretch with a little less than 1.5 miles  and 800′ to go. The trail will cross another ridge and emerge on the north slope of the peak, which will be wooded with live oaks and the occasional Coulter pine. The north slope often holds snow from winter storms for a decent amount of time, and it’s not uncommon to encounter small drifts and ice patches on this section. 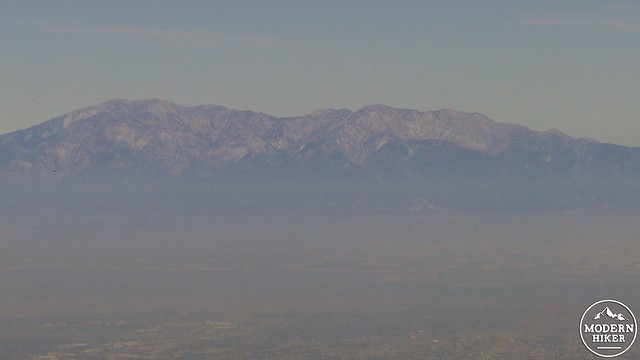 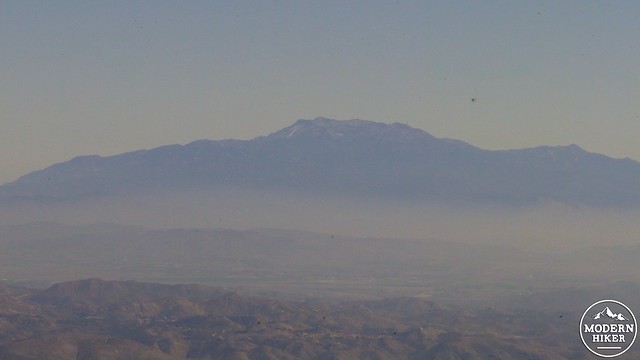 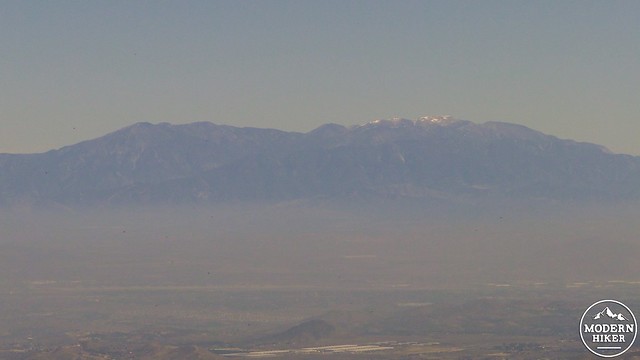 After a tight S-curve switchback, the summit towers will be upon you, and you will have reached the summit of Orange County’s high point. It’s difficult to identify where the actual summit is. The peak has been gradually rounded off by bulldozers to accommodate the extensive campus of antennae and attendant structures. These structures also make it difficult to gain a 360 degree view from any one spot. You will have to walk around the complex to get a full appreciation of the view. 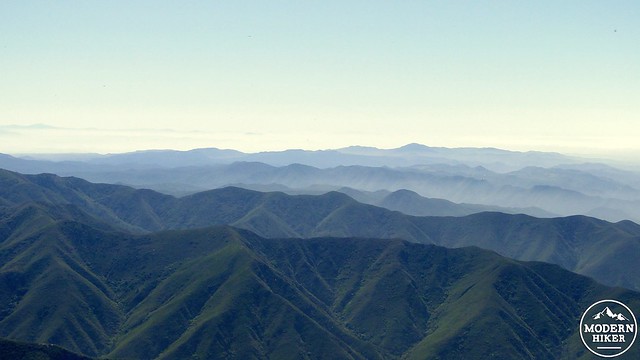 Looking south over a series of canyons

However, no matter what direction you look in, you will be guaranteed an eye-full. Aside from Mt. San Gorgonio, Mt. San Jacinto, and Mt. San Antonio, you will be treated to the rippling canyonlands of the Trabuco District of Cleveland National Forest as they drift away into the haze of San Diego County. Suburban Orange County sprawls out below to the west, and the hawk-eyed hiker will spot El Toro Marine Base and Disneyland among a number of popular landmarks. The view north is partially obscured by the northern half of the Santa Ana Mountains, but the view east, which is probably the most impressive, features the ramparts of the San Gabriel, San Bernadino, and San Jacinto Mountains framing the vast sprawl of the Inland Empire. 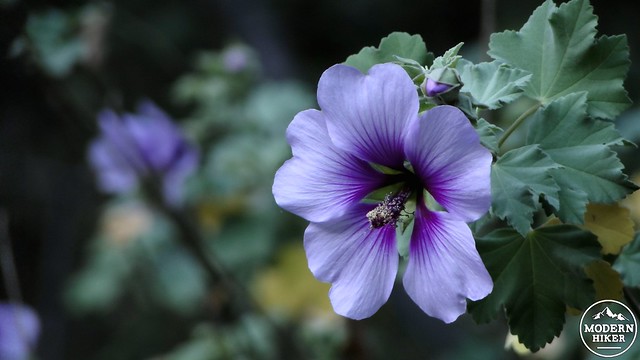 When you have reached maximum capacity for inspiring views, it is a “simple” matter or returning the way you came. I use quotes because you now have 7.7 miles of descent in which you will lose a knee-busting 4,000′. The climb up was long and possibly warm, and the descent will be nearly as taxing. It bears emphasizing that this is not an easy hike. Nor is it a hike one should take in hot weather. With the proper conditioning and preparation though, it is certainly the one of most exciting hikes in Orange County, as well as one of the more rewarding in Southern California.

The trail is pretty well-traveled and easy to follow. Some of the lower reaches of Holy Jim Canyon have some dense vegetation and at least one stream crossing. The higher elevations of the hike occur entirely on fire road.

Know that backpacking is not allowed on the Main Divide, nor are there optimal spots within Holy Jim Canyon. The nearest campground for car camping is at O'Neil Regional Park at the Arroyo Campground.

From I-5, exit at Alicia Parkway and head east into Mission Viejo. Follow Alicia Parkway to Santa Marguerite Parkway and turn right. Santa Marguerite Parkway will dead-end at Plano Trabuco Road, which will become Trabuco Canyon Road after making a hard left turn. Make a right onto Trabuco Creek Road, which will immediately become a dirt road that becomes progressively rougher before reaching the Holy Jim Trailhead. High clearance vehicles are recommended.

Yes. It's still under the fire closure, but it's also an open question regarding what condition the trail will be in after this next round of rains.

Do you know if Santiago peak is still closed?

Yes, but make sure your dog is up for the challenge. It's a long, difficult hike.

Estimate for the round trip. This is a difficult hike and will take some time.

Is the hour 8hr time estimate for the full round trip or just to the summit?

Jon B - You can park along the dirt road if the dirt parking "lot" at the trailhead is full. Just make sure you're not blocking the road. Also, this is a common trail for mountain bikers (i.e. from Holy Jim Trail - Main Divide Rd - Trabucco), so be one the look out for mountain bikers. We're a friendly bunch and love this area. Many will descend down Trabucco so just be on the lookout in case there's a blind curve.

For those of us not wishing to try out luck on the dirt road is there alternative parking nearby?

Leave a Reply to Jon B Cancel reply