In his nightly address on Wednesday, May 6th, Los Angeles Mayor Eric Garcetti announced the region was moving into Phase Two of its COVID-19 response, which would include a gradual loosening of restrictions around certain businesses. And — importantly — a re-opening of trail access. In the nightly address, Garcetti rightly talked about the need for coordination on this issue. He also talked about the need to open up many parks at the same time to avoid crushing crowds at the few that were open.

Unfortunately, the almost immediate response to these loosened restrictions has been confusion and complaints, not coordination.

In a matter of hours after the announcements, Los Angeles County had to issue corrections on dates. In his press conference, the mayor had talked about trails and golf courses would re-opening while also mentioning businesses would be able to re-open on Friday, May 8th. It was not entirely clear there were different dates for the two until the city’s COVID site posted a later update. This confusion was compounded with L.A. County’s initial Friday opening for trails, which was later changed to Saturday the 9th. For extra clarity, here is an L.A County tweet noting the Saturday date for trails that also shows you an L.A. County image saying trails are opening on Friday: 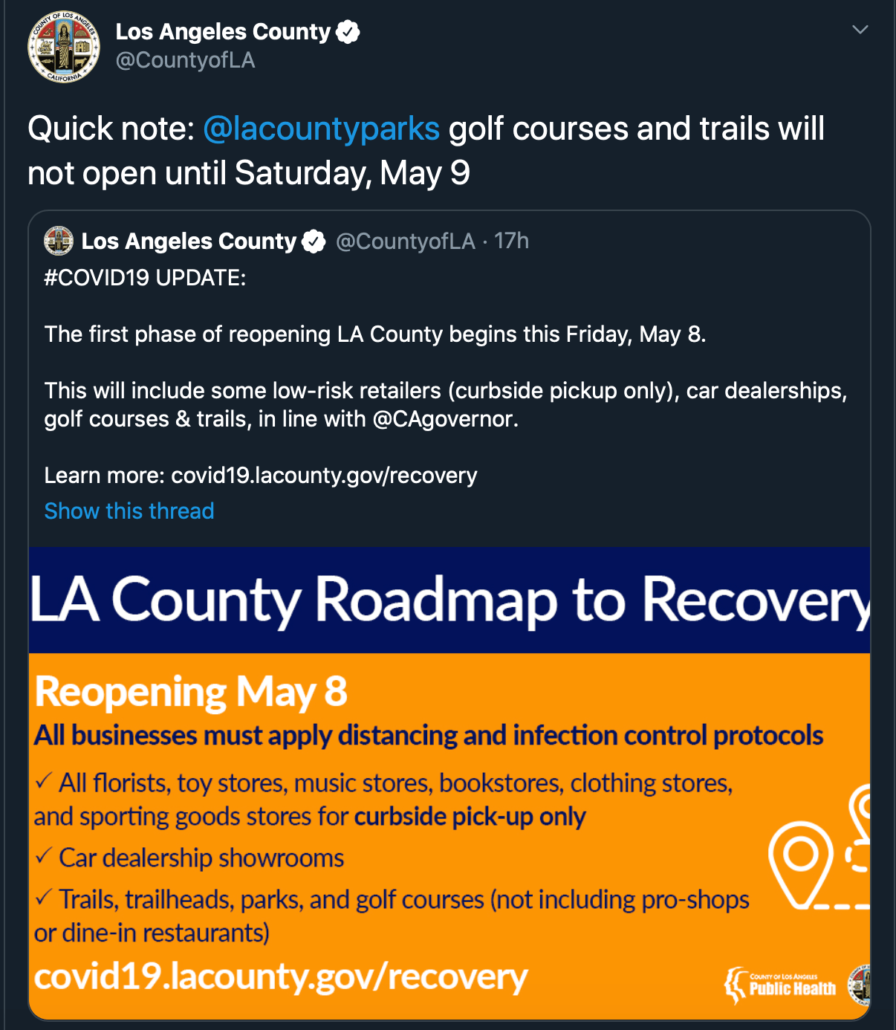 The announcements about City and County trails did not happen at the same time. Additionally, no information or even acknowledgment was given about the many other land management agencies that are caretakers of well-known and popular parks and hiking trails. At the time of the announcement and at the time of this writing, California State Parks still lists numerous COVID closures in the area at popular hiking destinations like Baldwin Hills, Topanga, Malibu Creek, L.A. State Historic, Santa Susana Pass State Historic Park, and others. Similarly, the Mountains Recreation Conservation Authority, which manages dozens of parks throughout the Santa Monica and Verdugo Mountains as well as along the Los Angeles River and Mount Washington, lists ALL parks as closed. And high-traffic areas in the San Gabriel Mountains managed by the Forest Service are still closed until mid-May, according to their most recent forest orders.

Additionally, sources who work at parks that will open this weekend have noted with concern that they also only recently found out about the re-openings, and many have not yet re-hired furloughed staff.

No clear guidance was given about on-trail safety measures. And no journalists asked any questions about these issues at the mayor’s nightly announcement. We were told we would have to maintain social distancing and use face masks, but simple and predictable follow-up questions to clarify these requirements were not asked and left unanswered.

This is not a recipe for success.

5 Ways We Could Have Avoided Confusion

When trails in other parts of California began to re-open in the last few weeks, we noted five sensible decisions that Los Angeles needed to follow to avoid the confusion that accompanied its closure orders:

So far, L.A. looks like it’s bungling 3/5 … and comments we’ve received so far are leading us to believe hikers may whiff on a fourth, too.

In Ventura County, the Conejo Open Space Conservation Agency announced their re-opening with clear infographics on safety measures across their social media networks for several days. They also opted for a slower re-opening, first opening trail access to neighborhoods but continuing to restrict parking for travelers. The City and County of San Diego followed suit, and have been slowly opening up trailhead parking over the past few weeks. 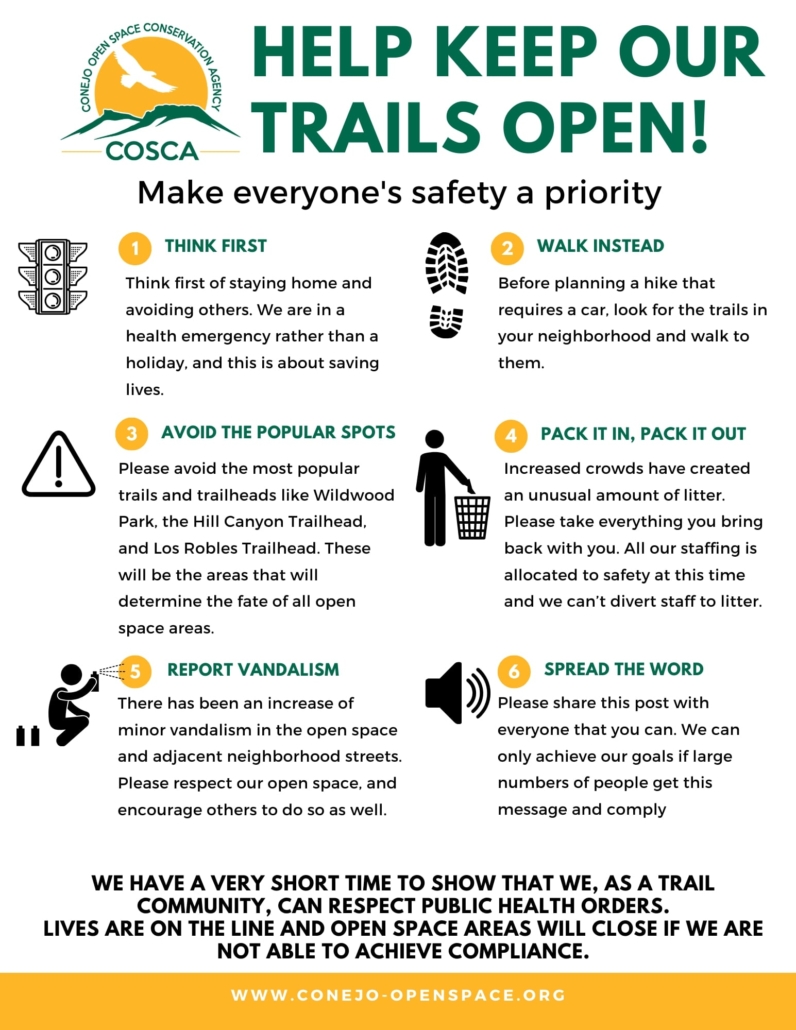 The East Bay Regional Park District in the San Francisco Bay area went one step further, with a one-stop website that lists all closures and restrictions and extremely clear signs detailing the necessary on-trail health guidelines, too. 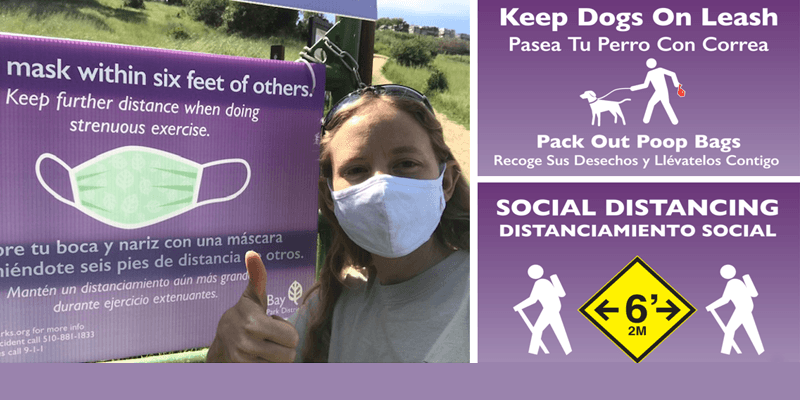 In contrast, Los Angeles kind of just seems to have gone “Surprise! We’re open on Friday! I mean Saturday!” and not really coordinated with the vast network of parks and public land managers in L.A. County at all.

So what about hikers? You know, the folks who have spent the past 2 months mourning the loss of access and complaining about not being able to hike their favorite trails? Surely, they would be happy about being able to hike again, even if it meant slight adjustments to their behavior for the safety of others, right? 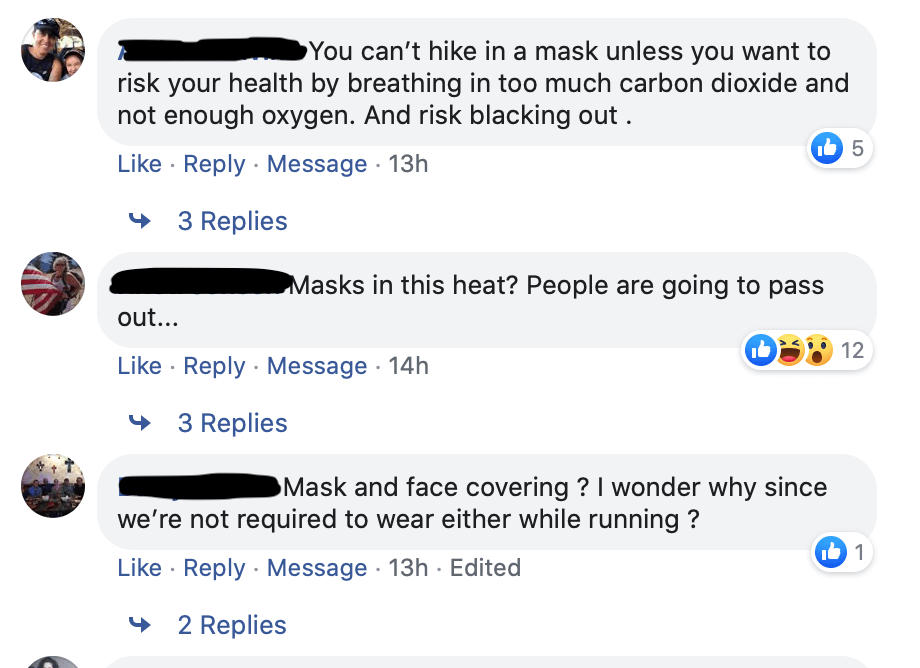 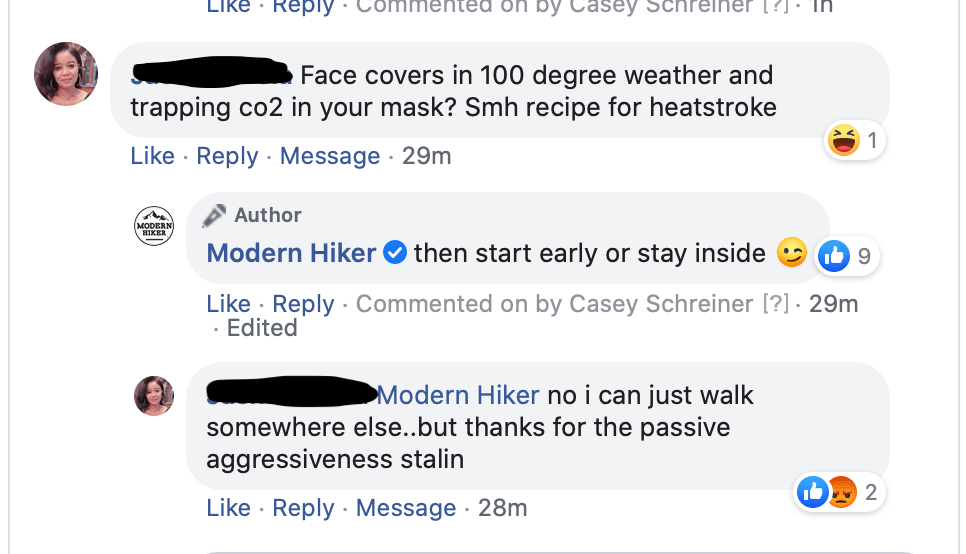 Most Modern Hiker readers do seem excited to get back onto the trail and willing to follow health guidelines, but there were a bit too many comments like these in my feed the past few days. Even with numerous reminders from Mayor Garcetti that these trail openings are conditional — and those conditions require hikers following the (to be fair, kind of vague) health guidelines.

What Should I Do?

PLEASE – if you are going to go hiking this weekend, remember:

We’re all in this together, folks. Be good out there, and enjoy the trails.

And if you’re not working or busy right now? It might be a good idea to wait until Monday to hike.

Be sure to also check out Your Guide to Hiking During Quarantine for some broad, general guidelines for getting out onto a trail. This post was written in the early days of the Stay at Home order but is still a source of good tips for outdoorsfolk that apply no matter what level of restrictions are in effect in your community.