In 2009, the historic Vetter Mountain Lookout burned down in the Station Fire, the largest wildfire in Los Angeles County’s history. The area was closed off to hikers for many years, and although the lookout is gone and the trails are still in a bit of disrepair, the area is once again open to hikers. You may not find an historic wooden structure anymore, but the views are still spectacular and well worth the relatively mild effort needed to reach the summit. Plus, if you happen to be there during the dry months and the Angeles National Forest Fire Lookout Association has volunteers manning the lookout, you can get a chance to learn about how these decidedly low-tech outposts are still an important part of modern backcountry firefighting. 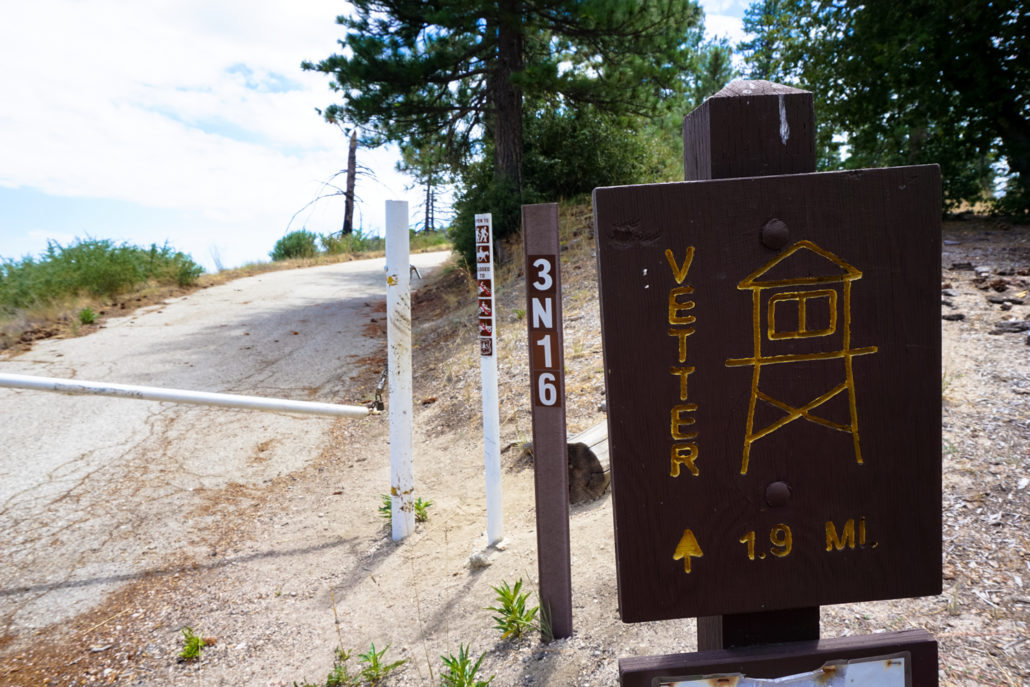 The trail begins at this locked gate, where a small parking area is available for hikers to use. There is a trail network that exists here (see this post for more info and a side trip to nearby Mount Mooney), but because this area even in 2018 is still subject to trail closures and future maintenance, the route as described here just sticks to one of the paved access roads to the Lookout.

But hey – just because you’re hiking on an old road doesn’t mean you won’t enjoy some pretty spectacular views. This path runs right across the Silver Moccasin Trail, a popular long-distance route that winds its way deep into the interior of the San Gabriel Mountains. You’ll be able to see the rugged terrain just behind the front range, with the prominent backside of Mount Wilson almost directly to the south. Strawberry Peak‘s distinctive shape beckons to the west, while the similarly recognizable form of Twin Peaks looms to the east and Pacifico Mountain towers over the canyons to the north. It’s pretty easy to figure out why they decided this was a solid spot for a fire lookout. 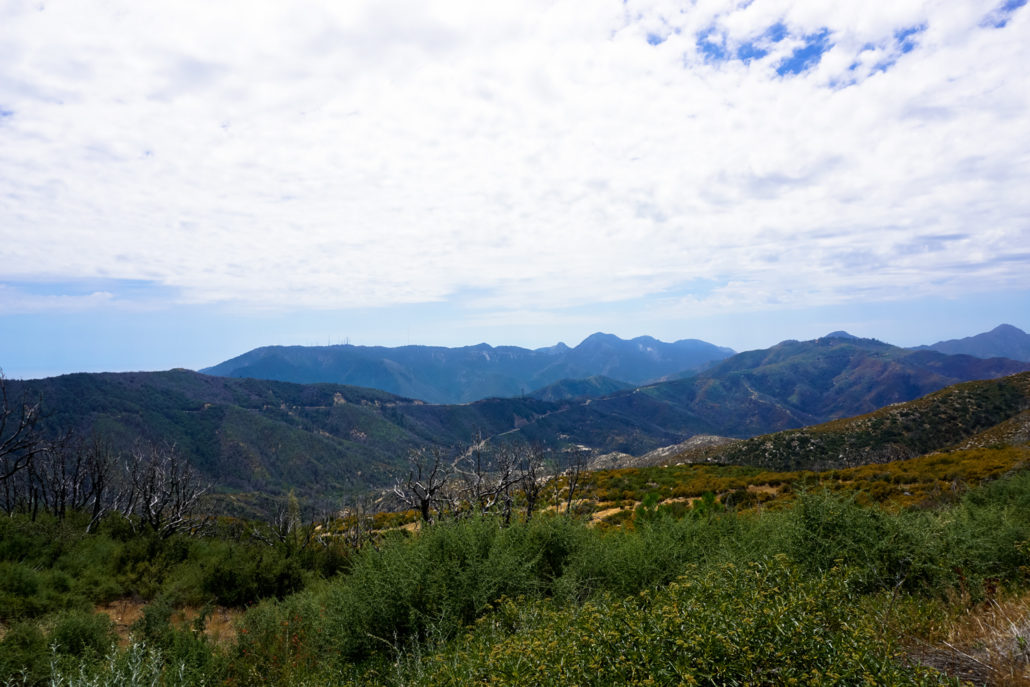 the tower farm atop Mount Wilson 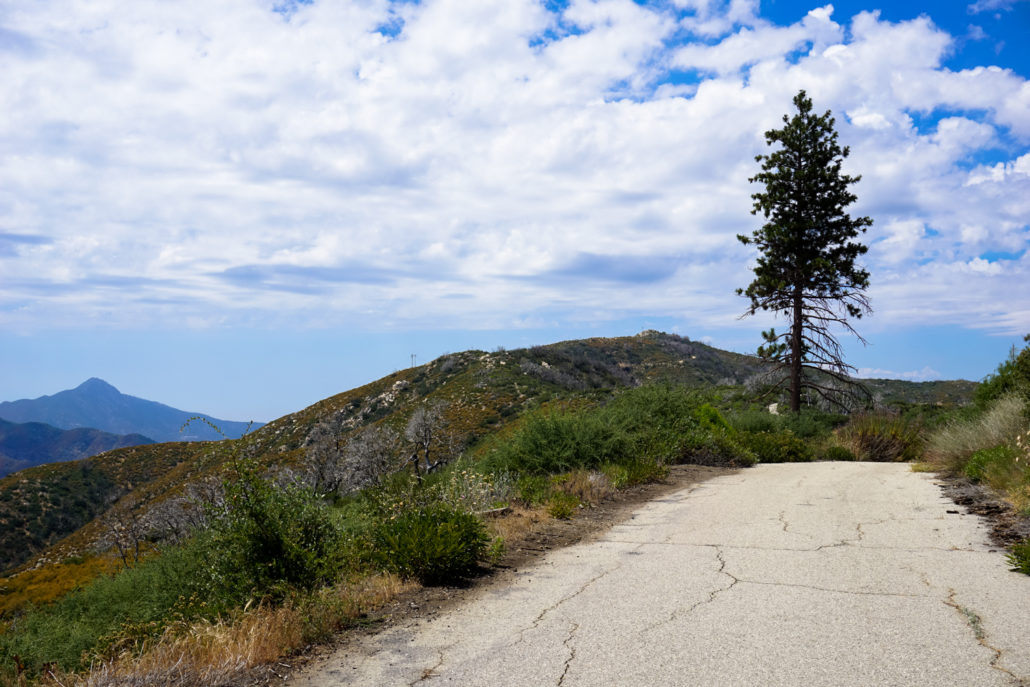 the old road – with a prominent Strawberry Peak to the left

As you hike here, you’ll be walking through a formerly bustling recreation area that is on the mend after the devastating Station Fire. You’ll be able to make out remains of ruined buildings and — if you follow the path of the road to the west — where the Vetter Mountain Lookout used to stand.

You’ll also be walking through the former home of a dense and tall pine grove. Most of what remains now is regrowing scrub oak, although there are several groves of pine trees that may make a recovery if we get a few more solid wet seasons. 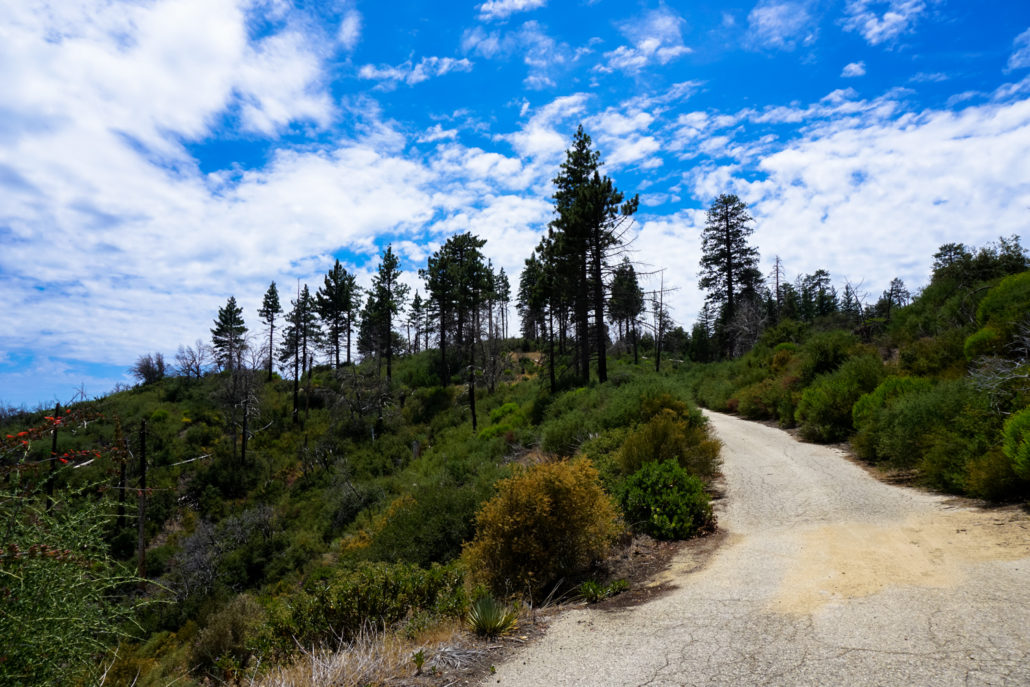 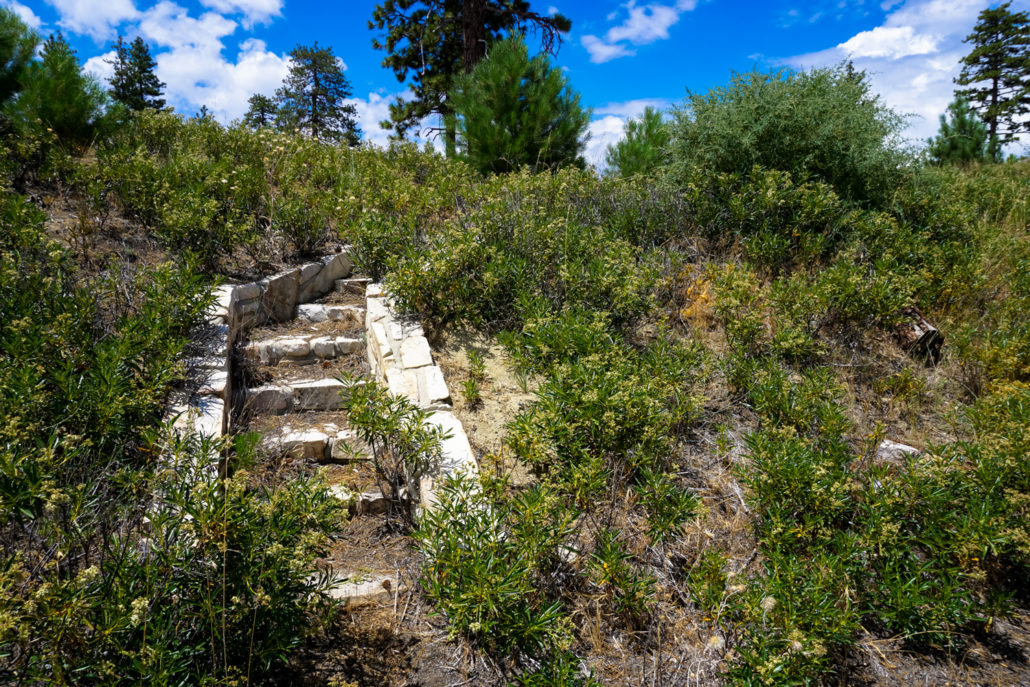 Keep left at 0.2 mile and just before 0.6 mile you’ll pass the remnants of an old turnout area. The Silver Moccasin Trail crosses the road just after this — stay straight to continue on Vetter Mountain Road and keep to the left again at 1.2 miles to ignore a spur trail that descends down toward the old Vetter Mountain Trail and a water storage tank.

From here, you should be able to see the Lookout site perched above the road. Soak up the rest of the interior San Gabriel scenery as you approach. 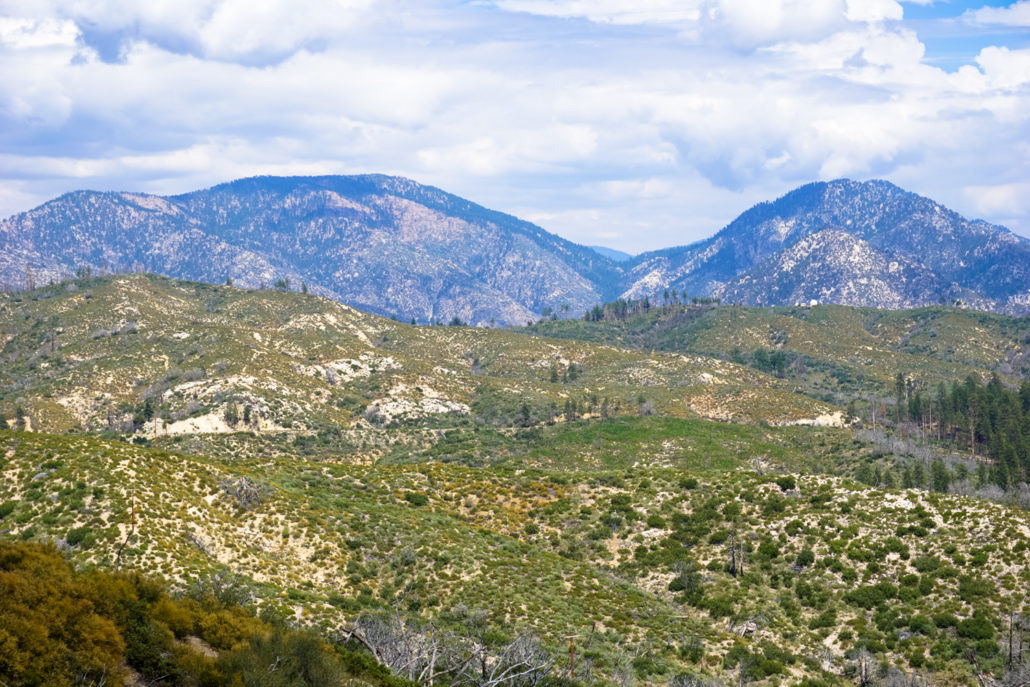 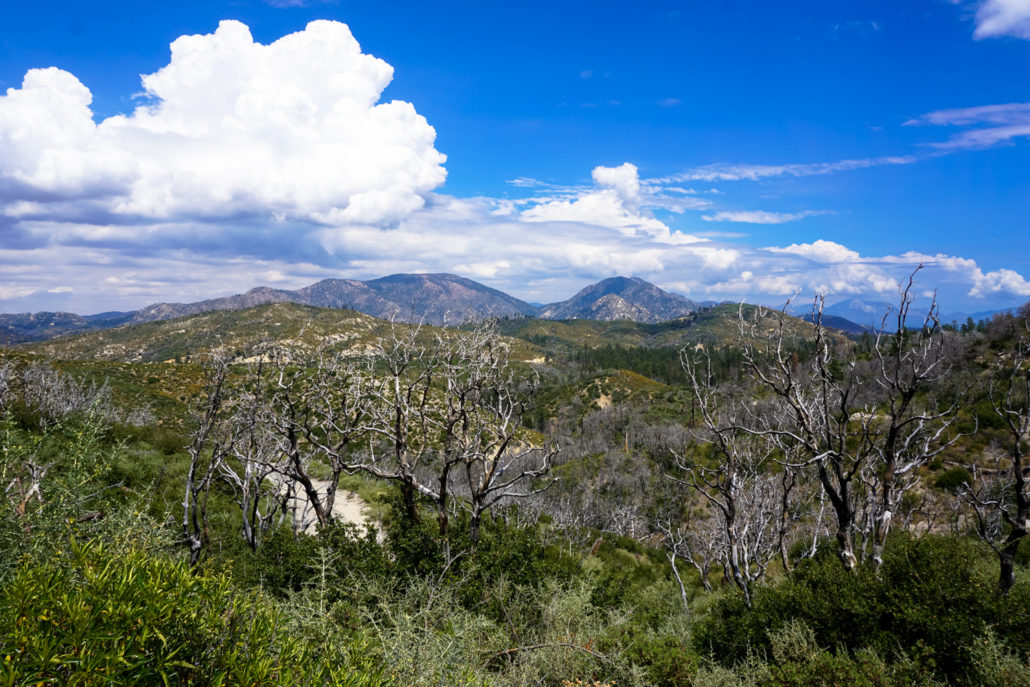 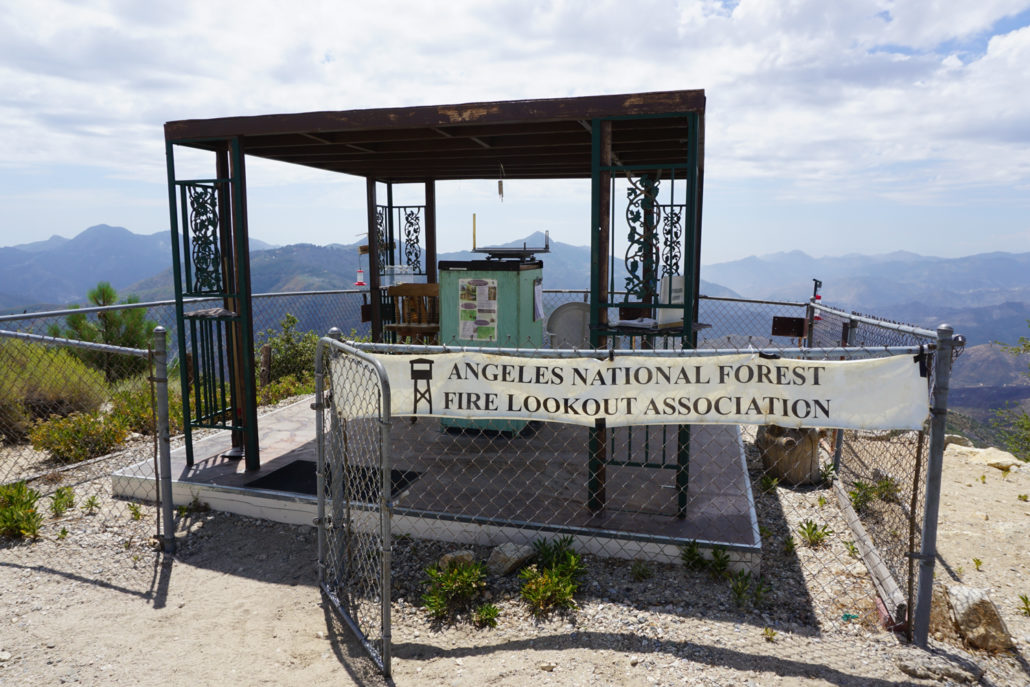 At about 1.75 miles, you’ll come across this replacement lookout, manned by the ANFFLA. During fire season, you may spot some volunteers here radioing in condition updates or smoke sightings. There’s a guestbook in the lookout, and if people are working here and not too busy, they’ll likely enjoy telling you a bit about the lookout process and the efforts to rebuild the historic Vetter Mountain Lookout. 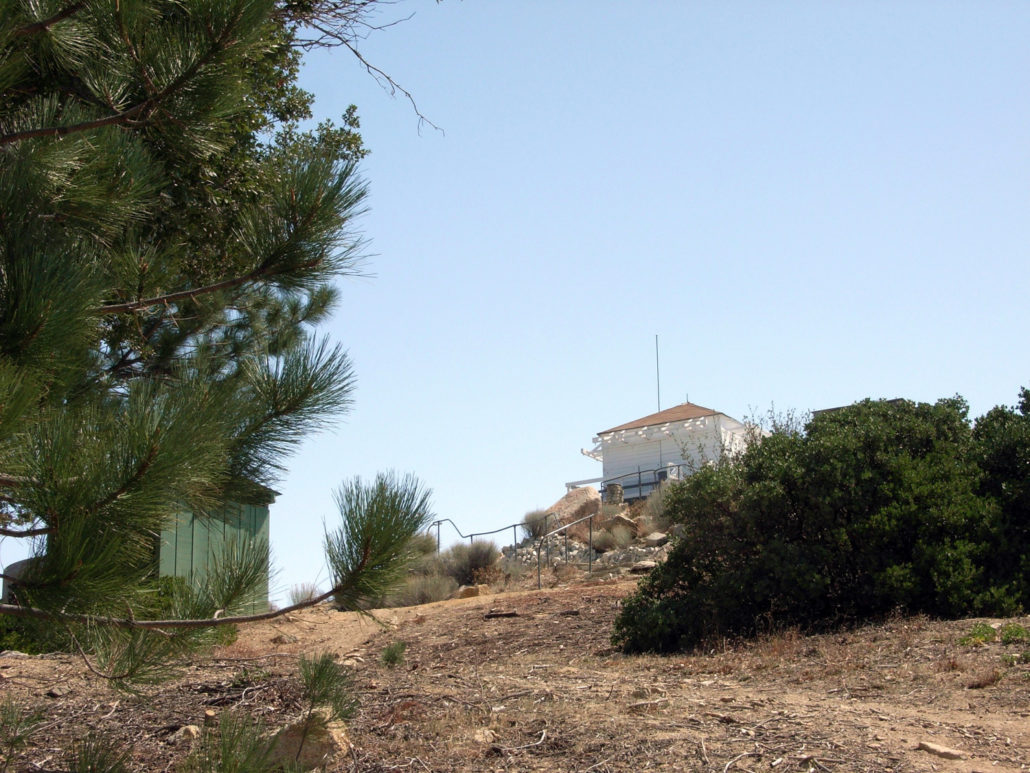 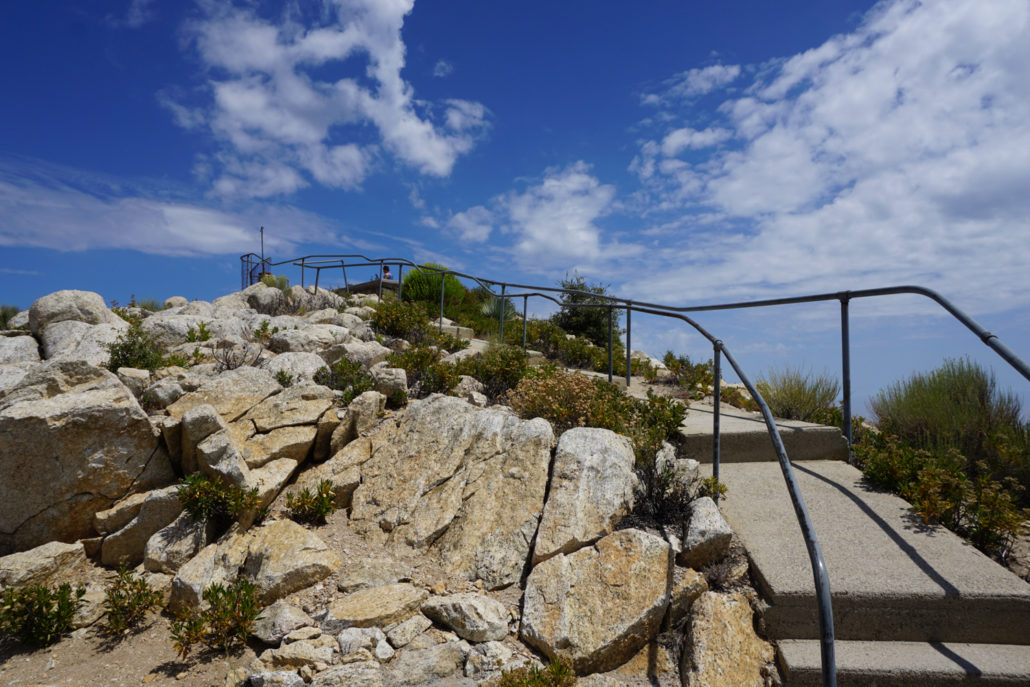 Approach to the lookout site, 2018

The lookout site is just a short walk from the temporary lookout, and it’s worth it for the incredible views — and the chance to envision the lookout structure that used to be here and will hopefully return again soon. 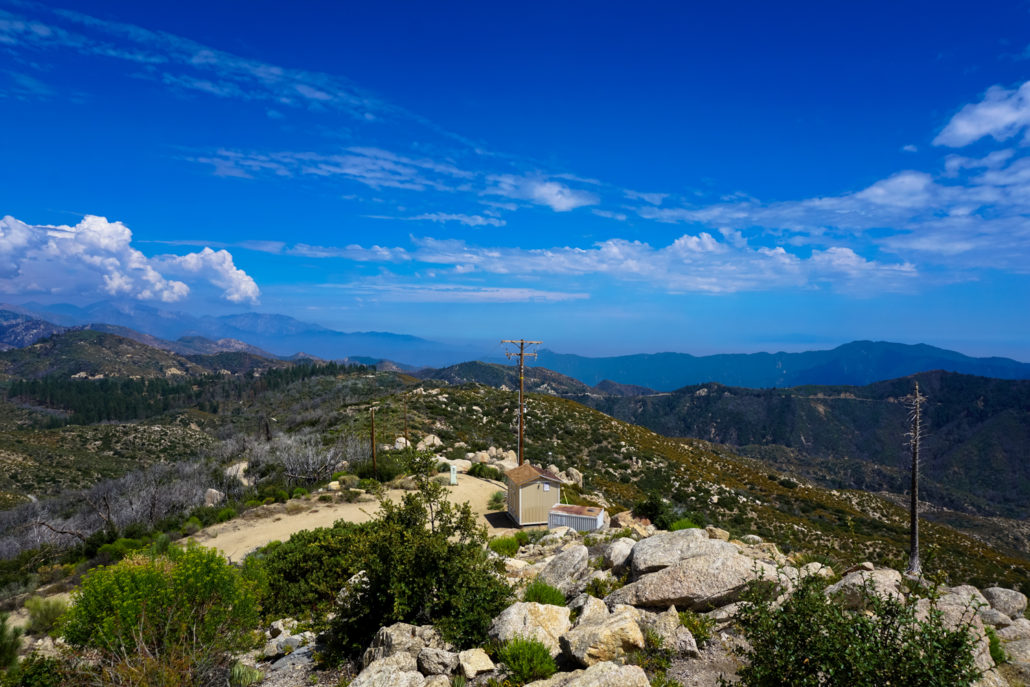 Return back the way you came. 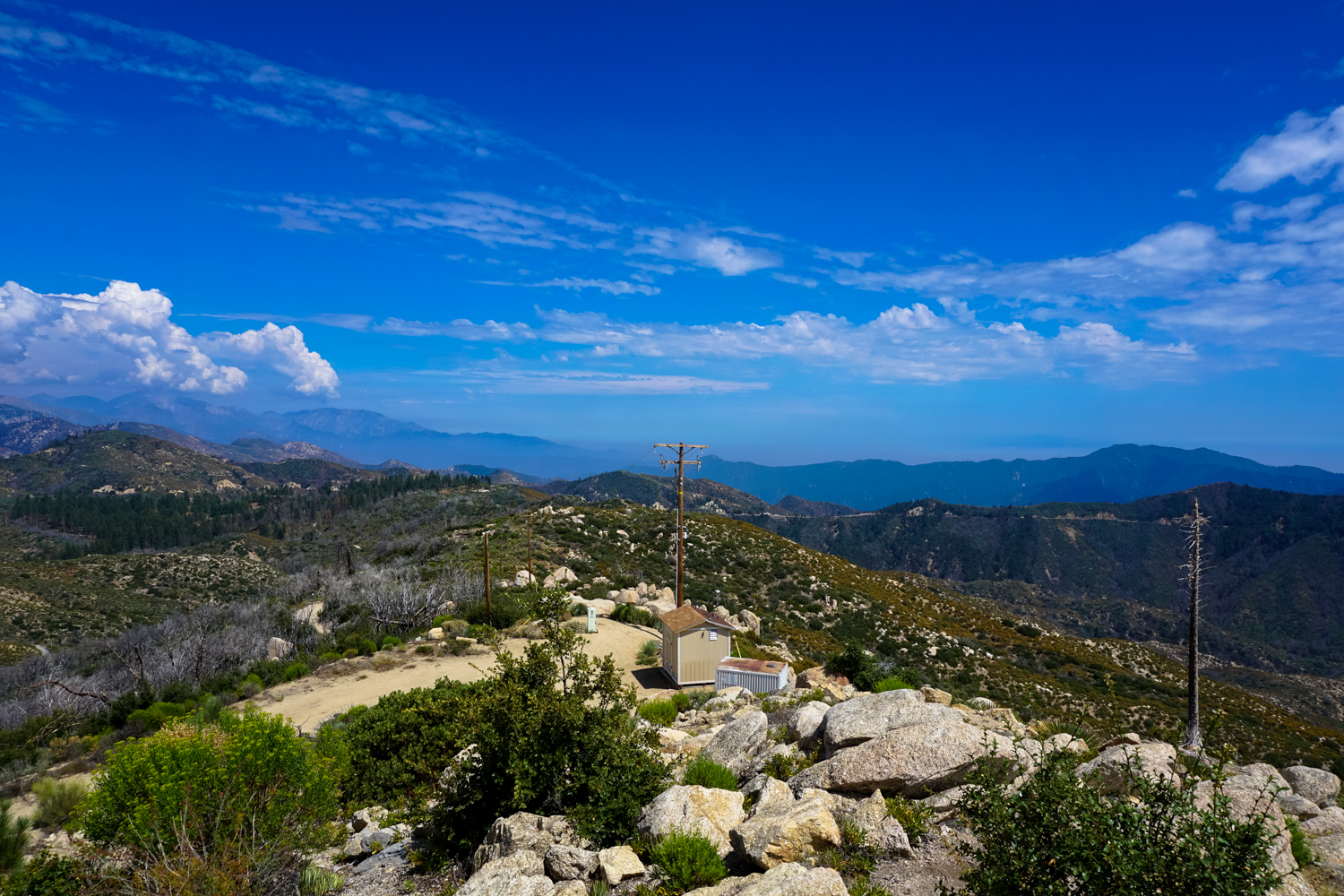 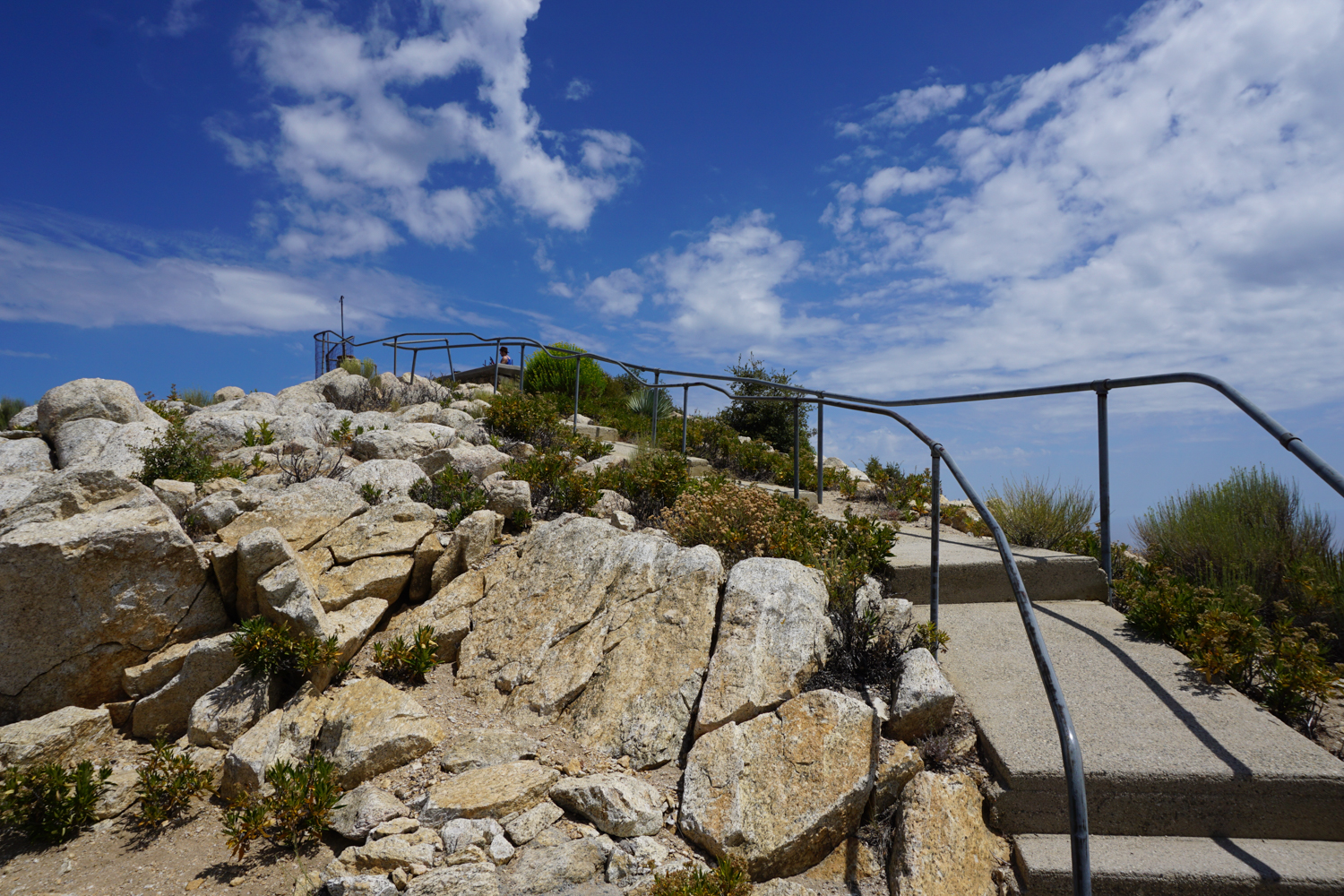 Approach to the lookout site, 2018 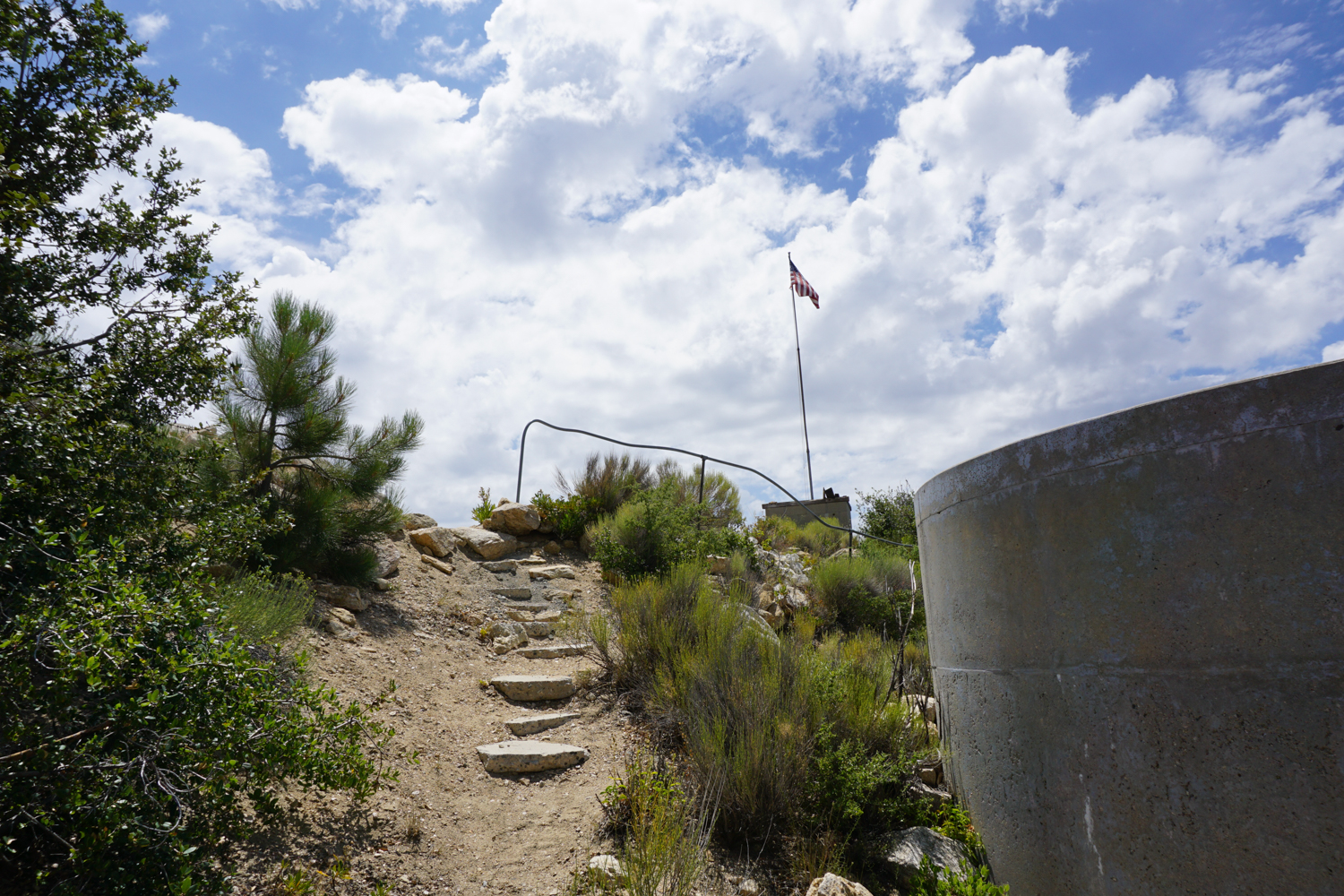 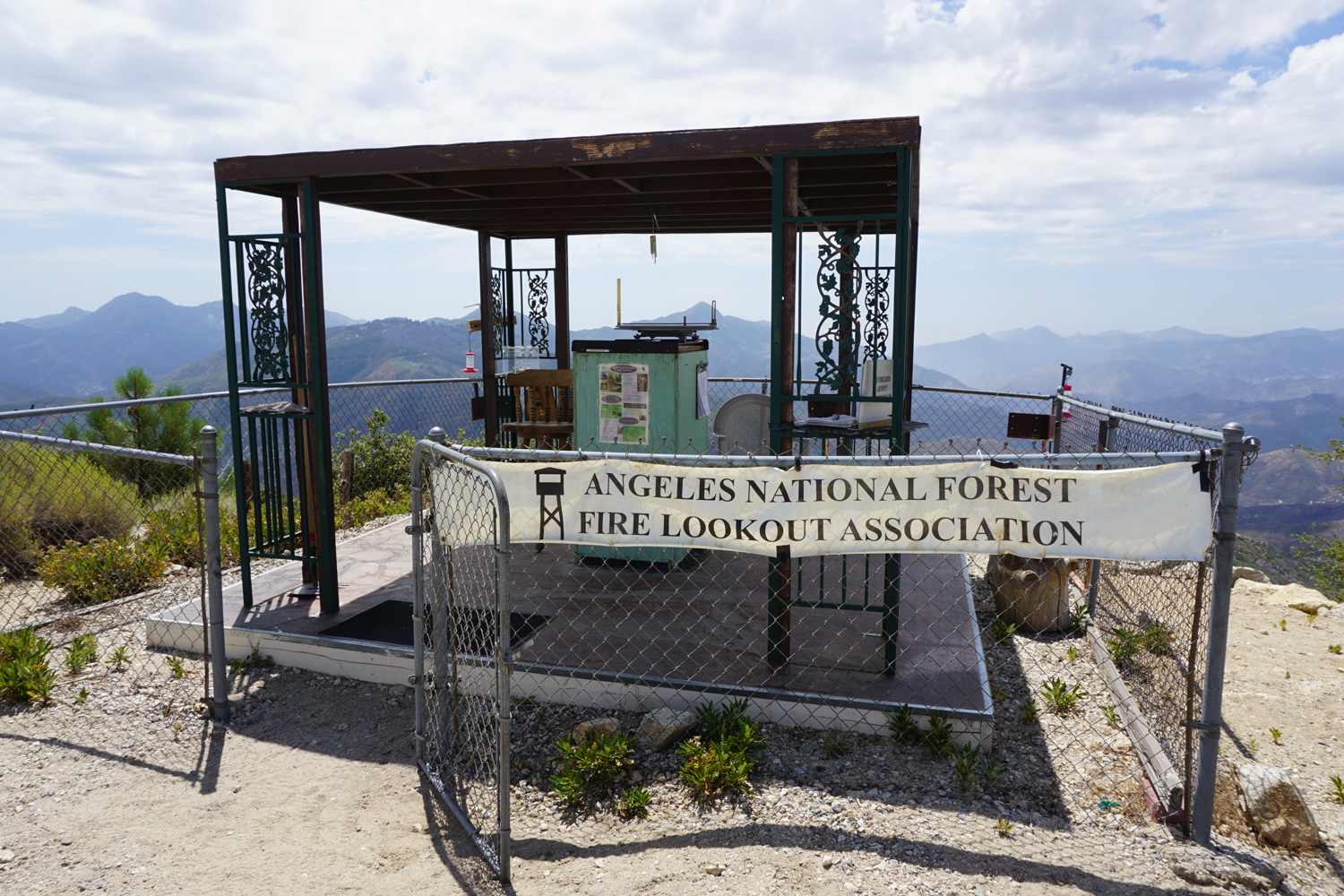 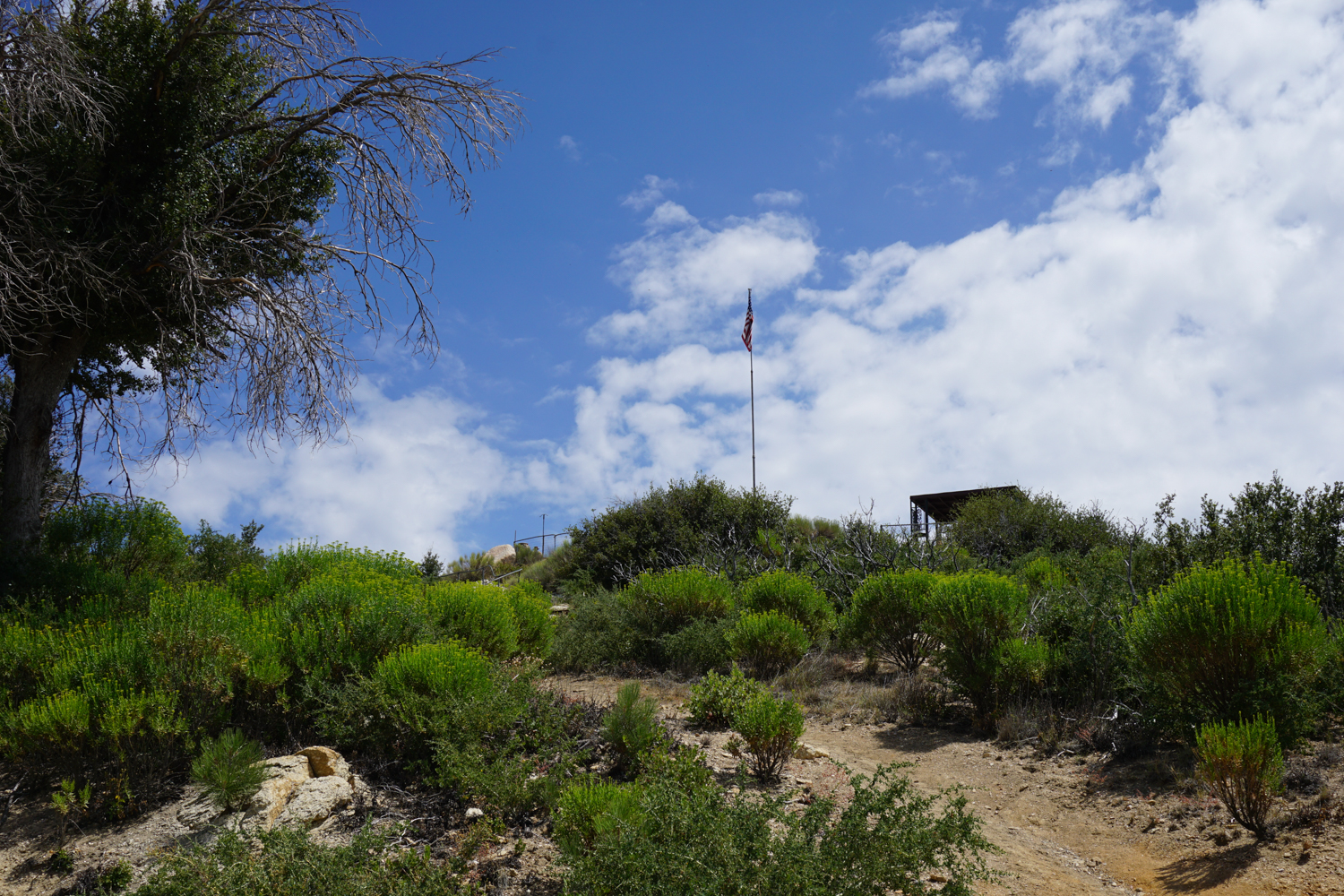 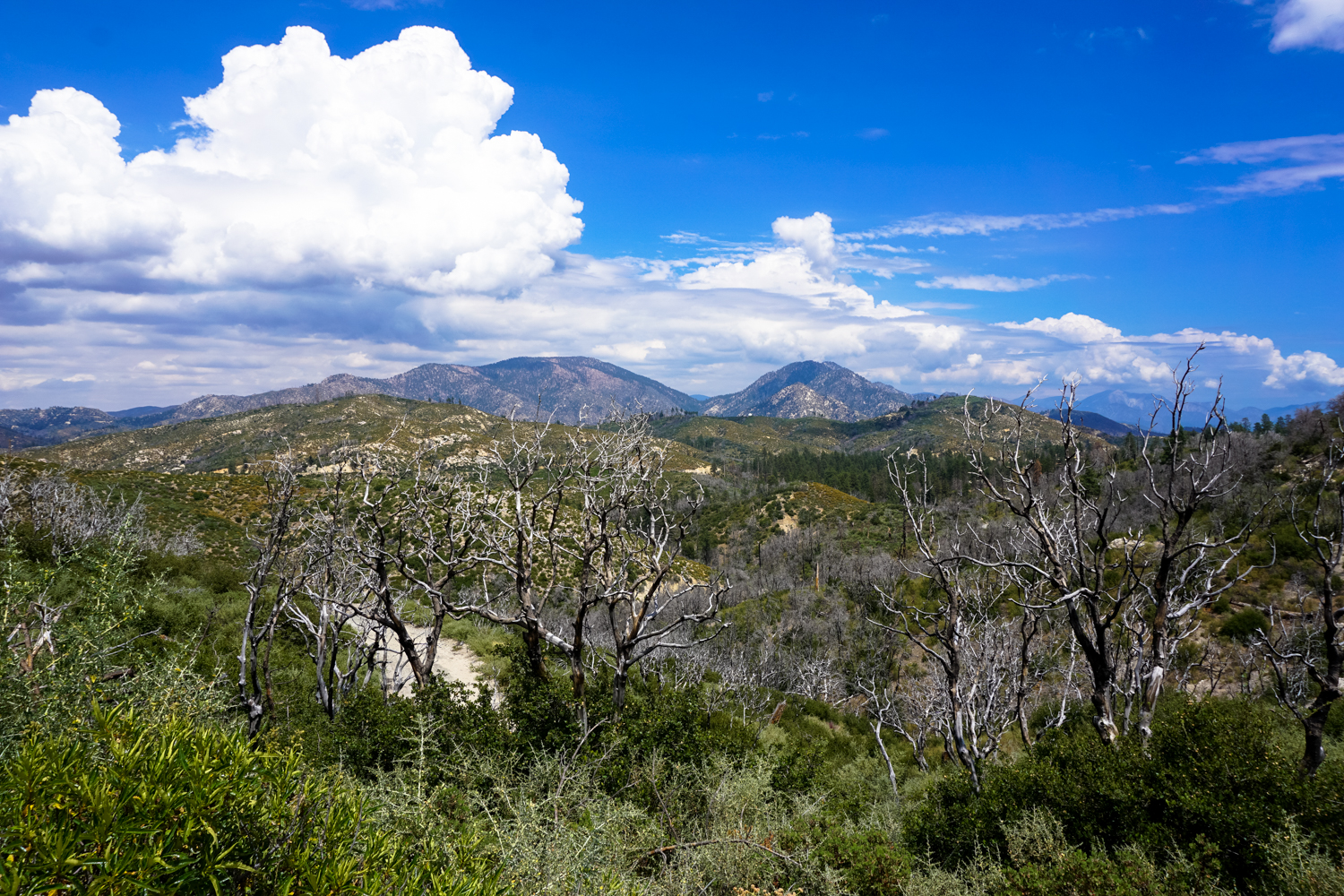 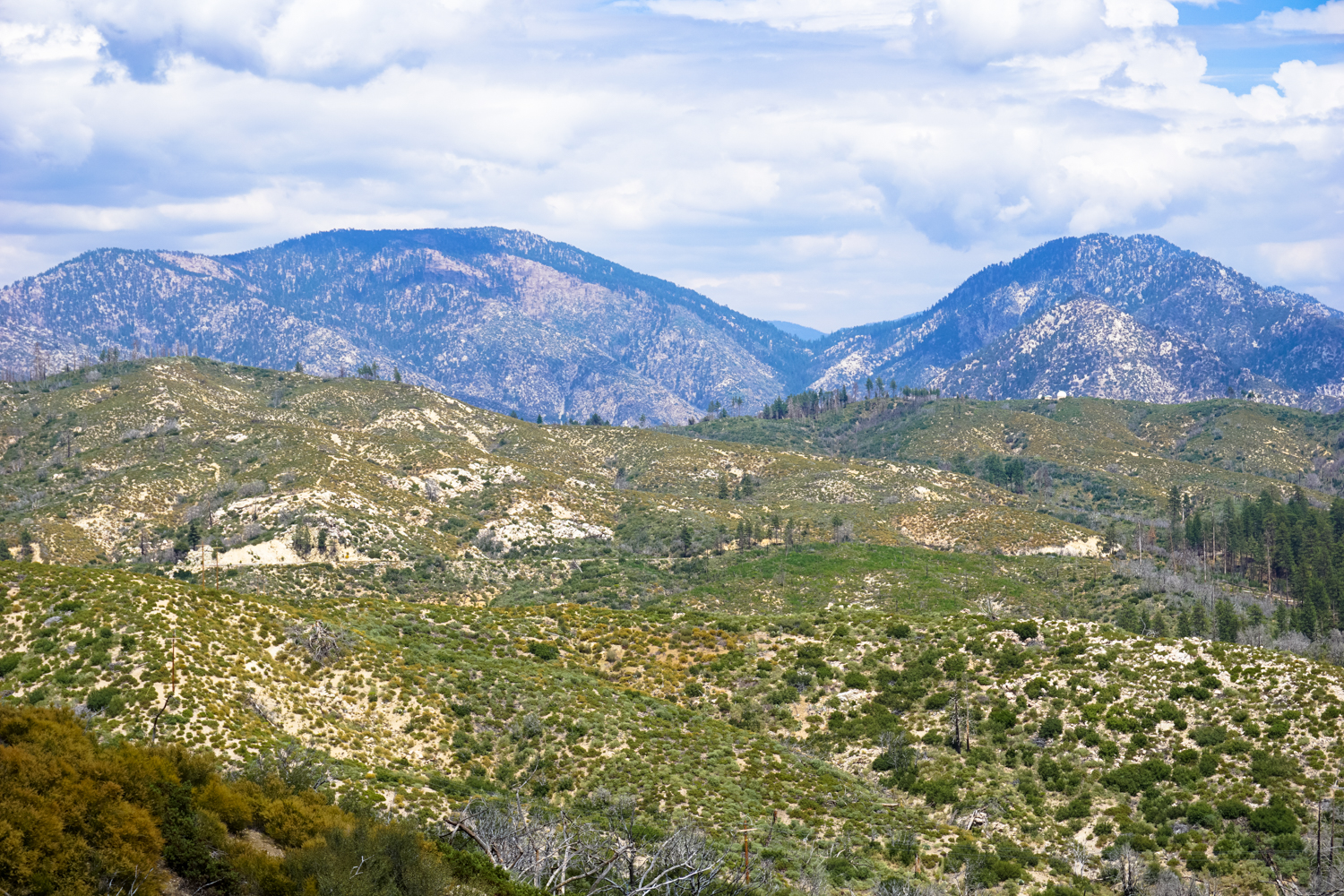 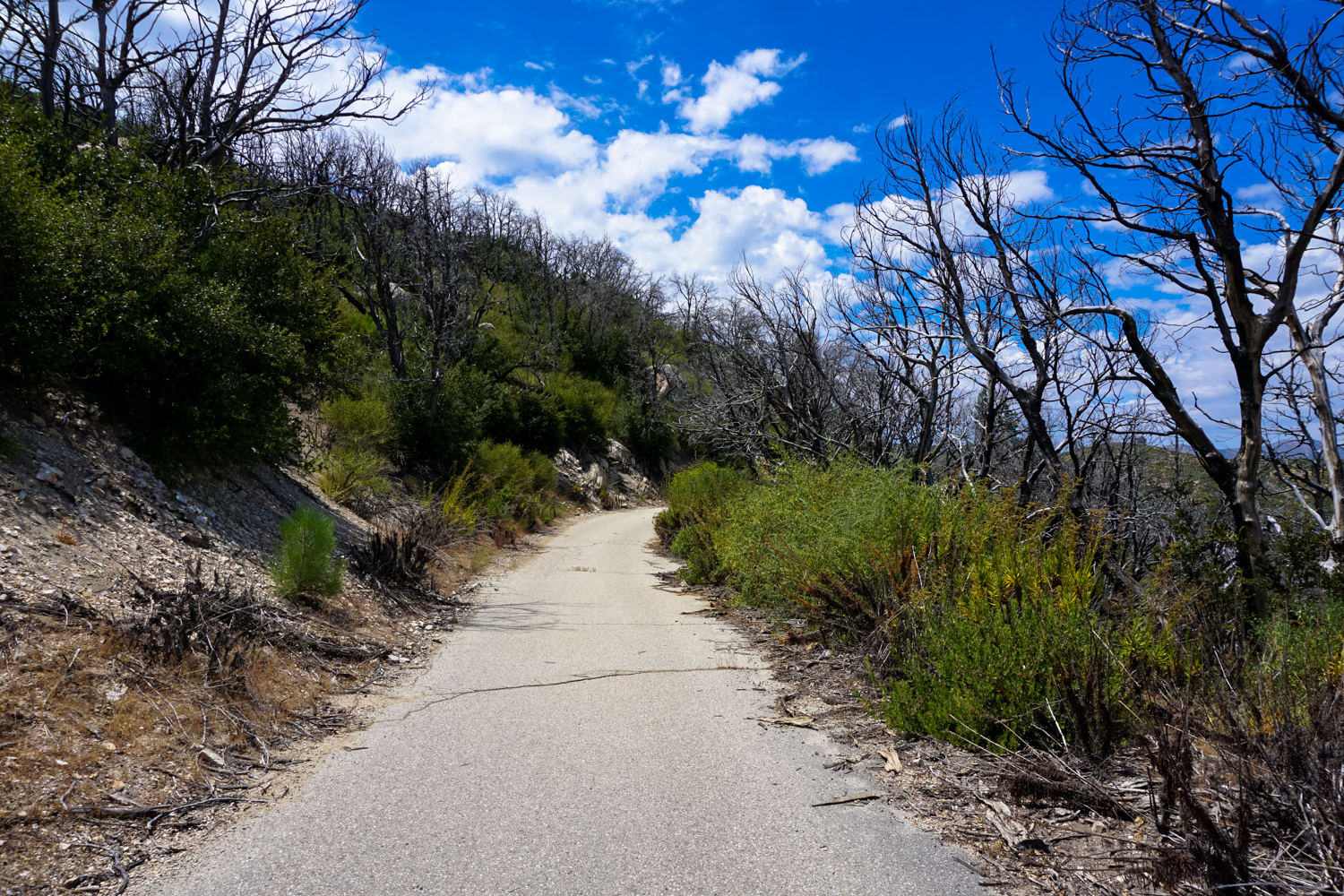 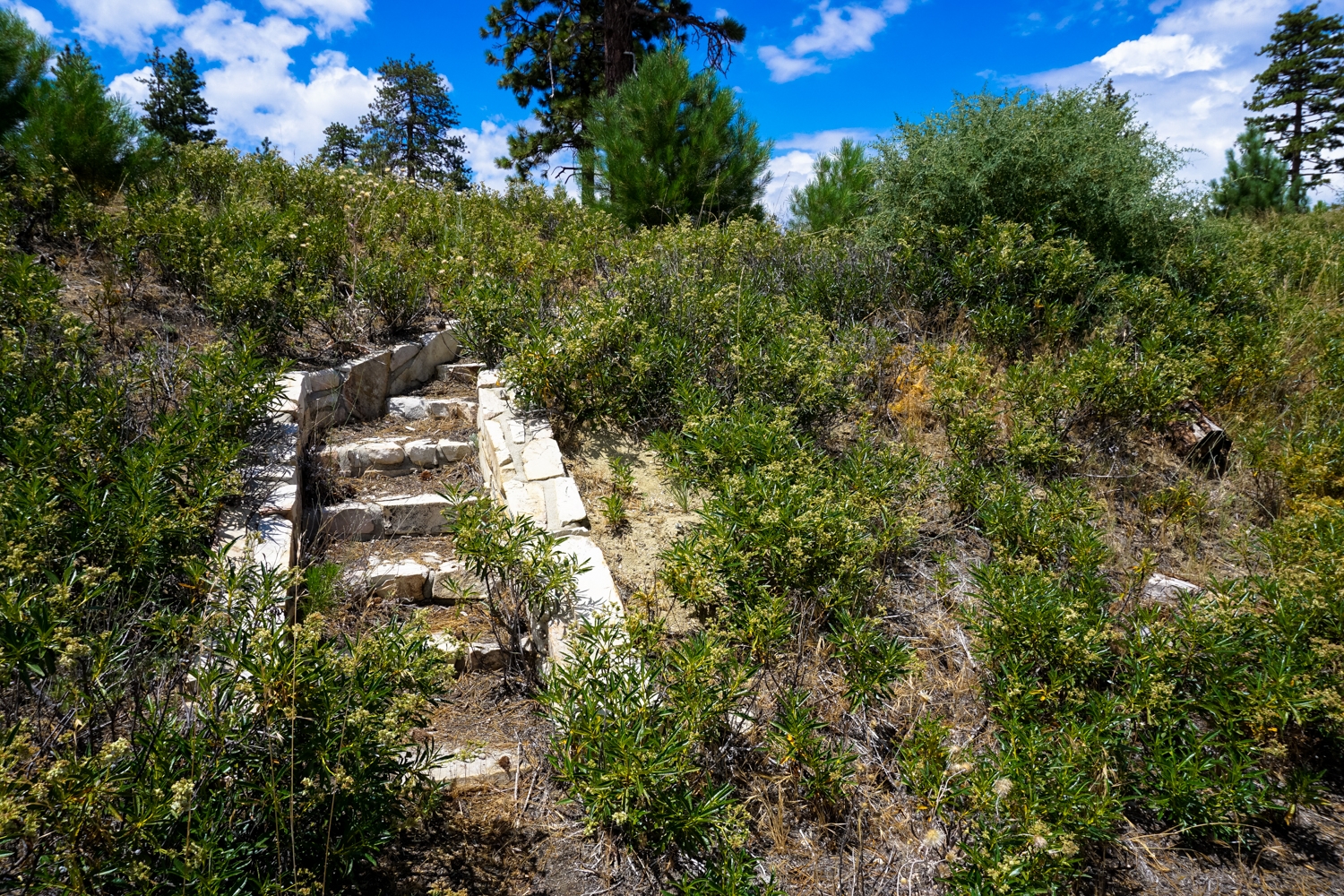 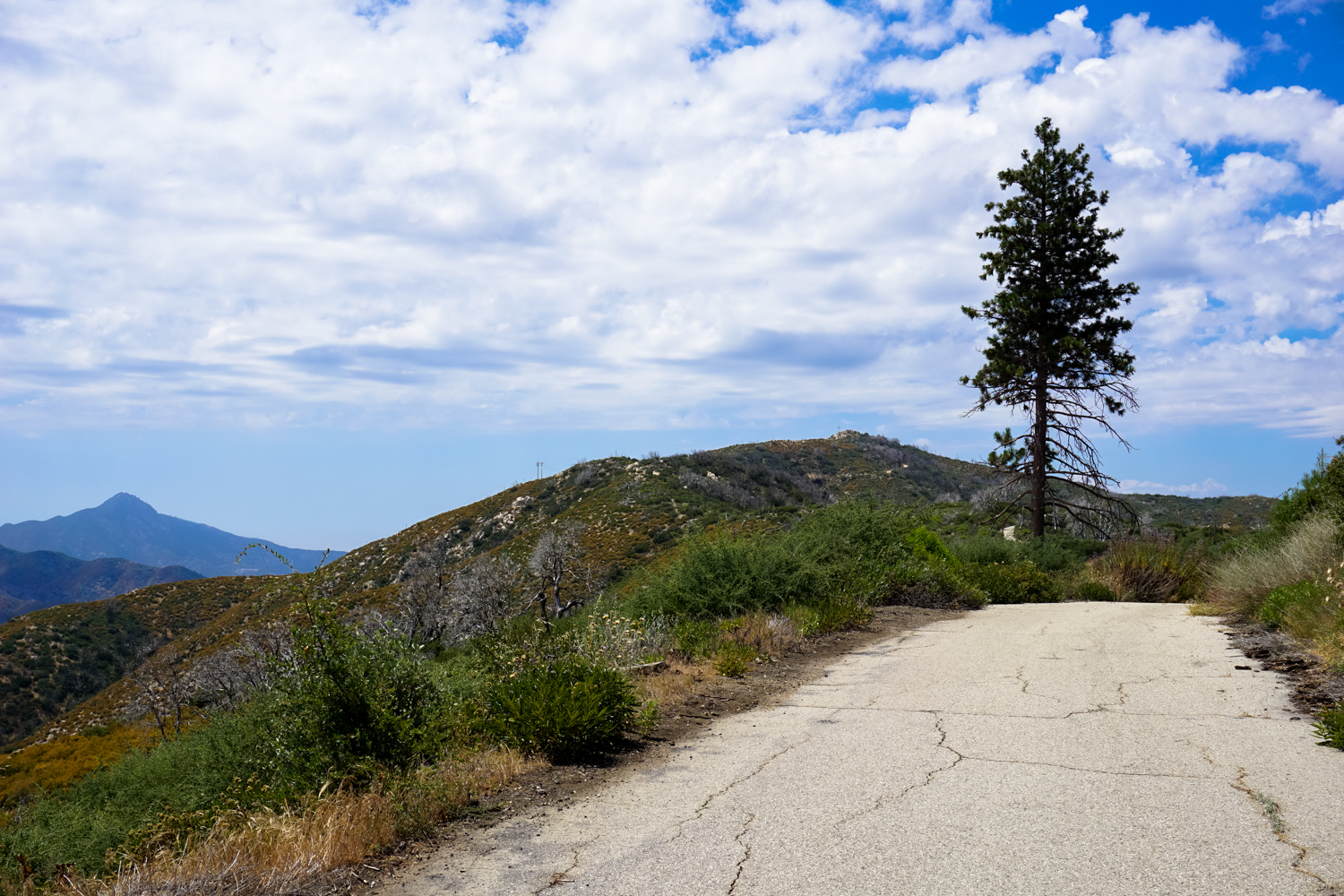 the old road – with a prominent Strawberry Peak to the left 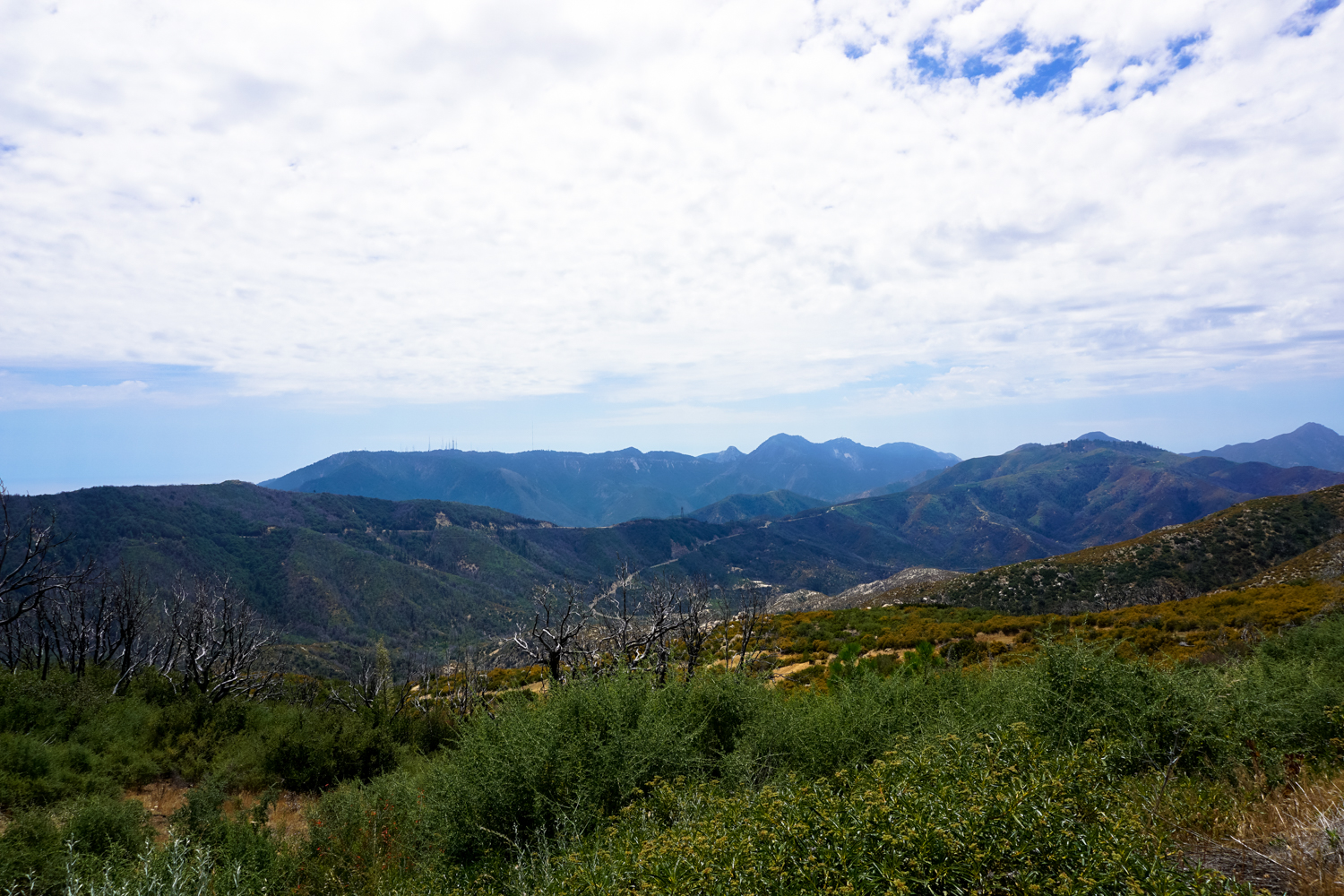 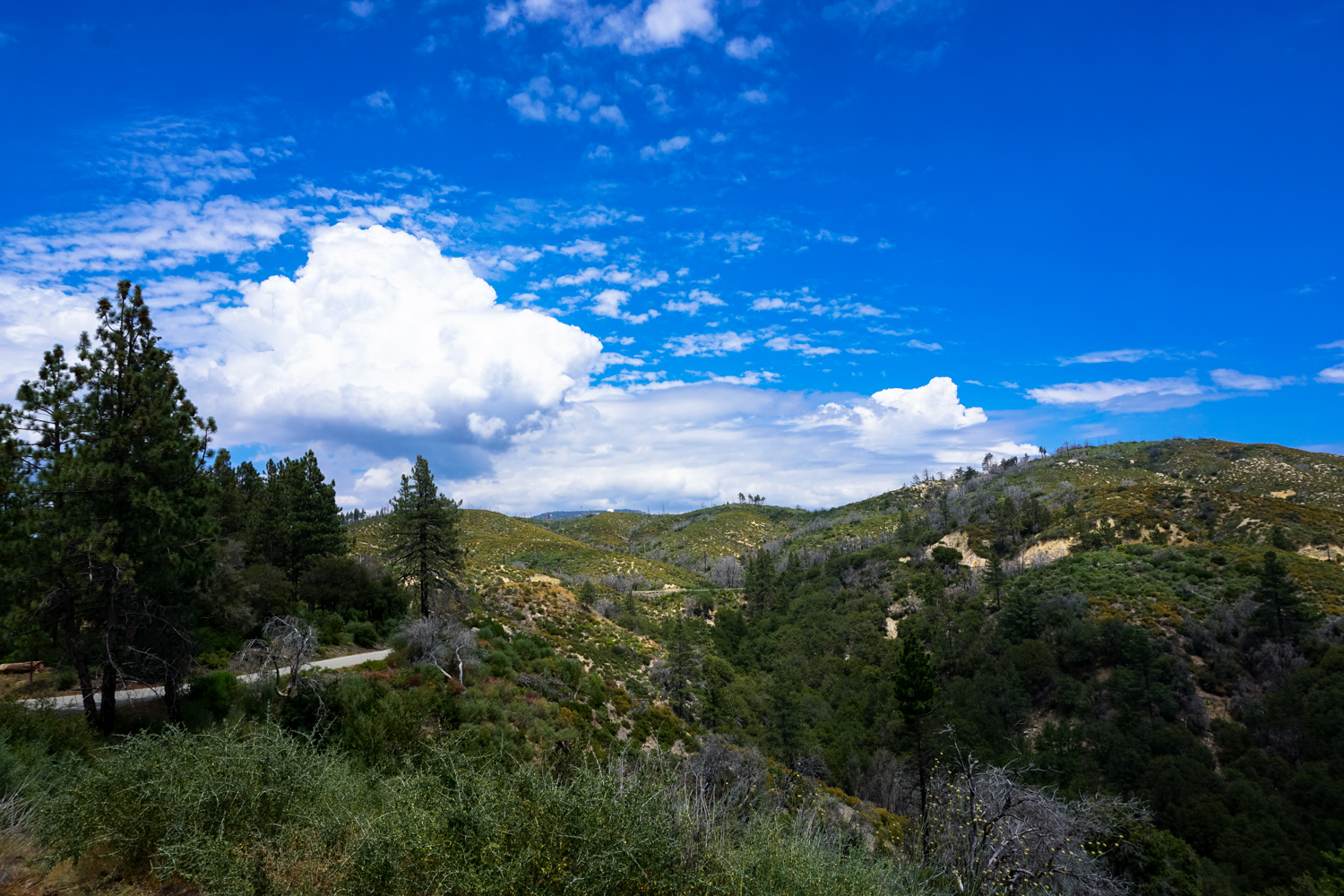 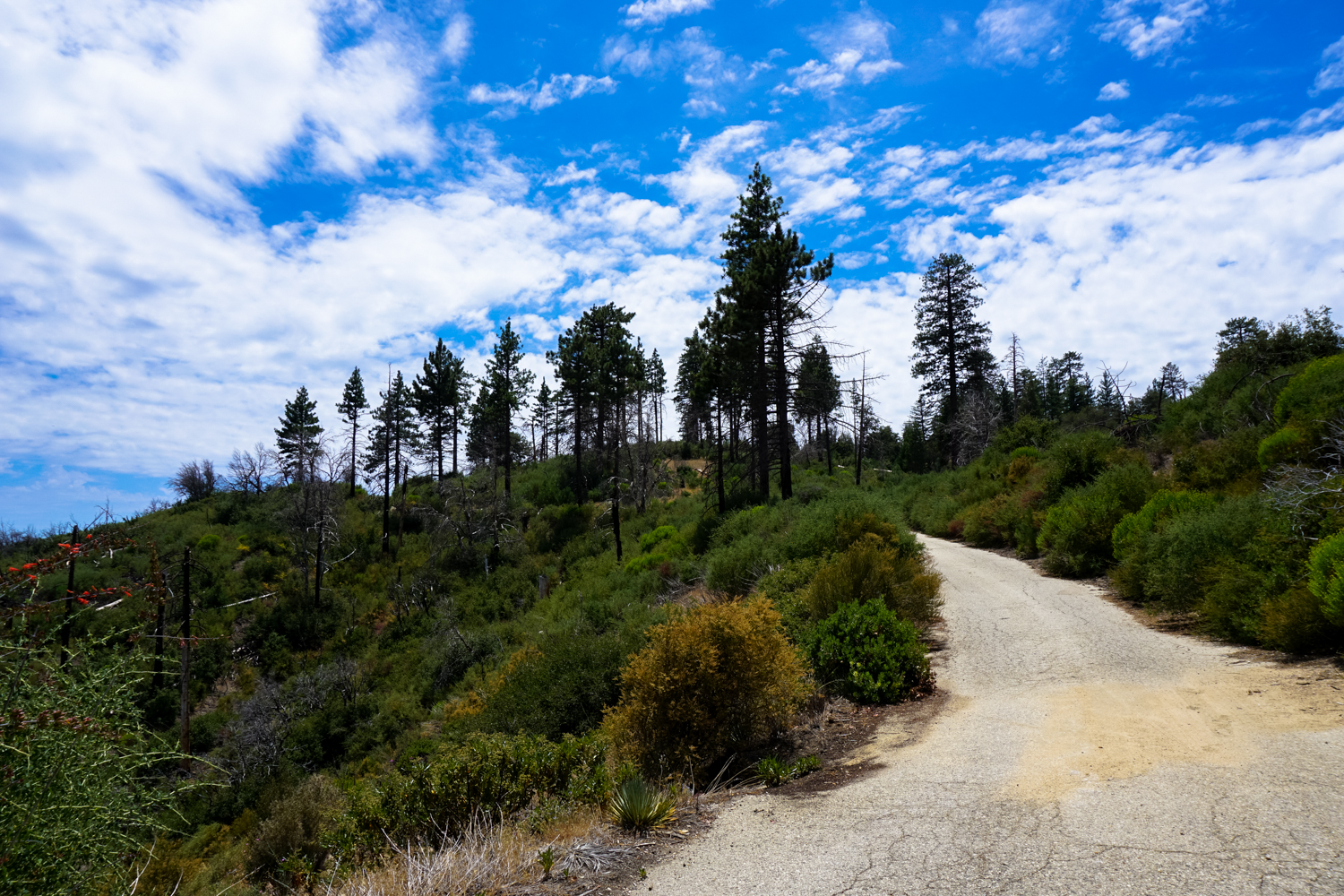 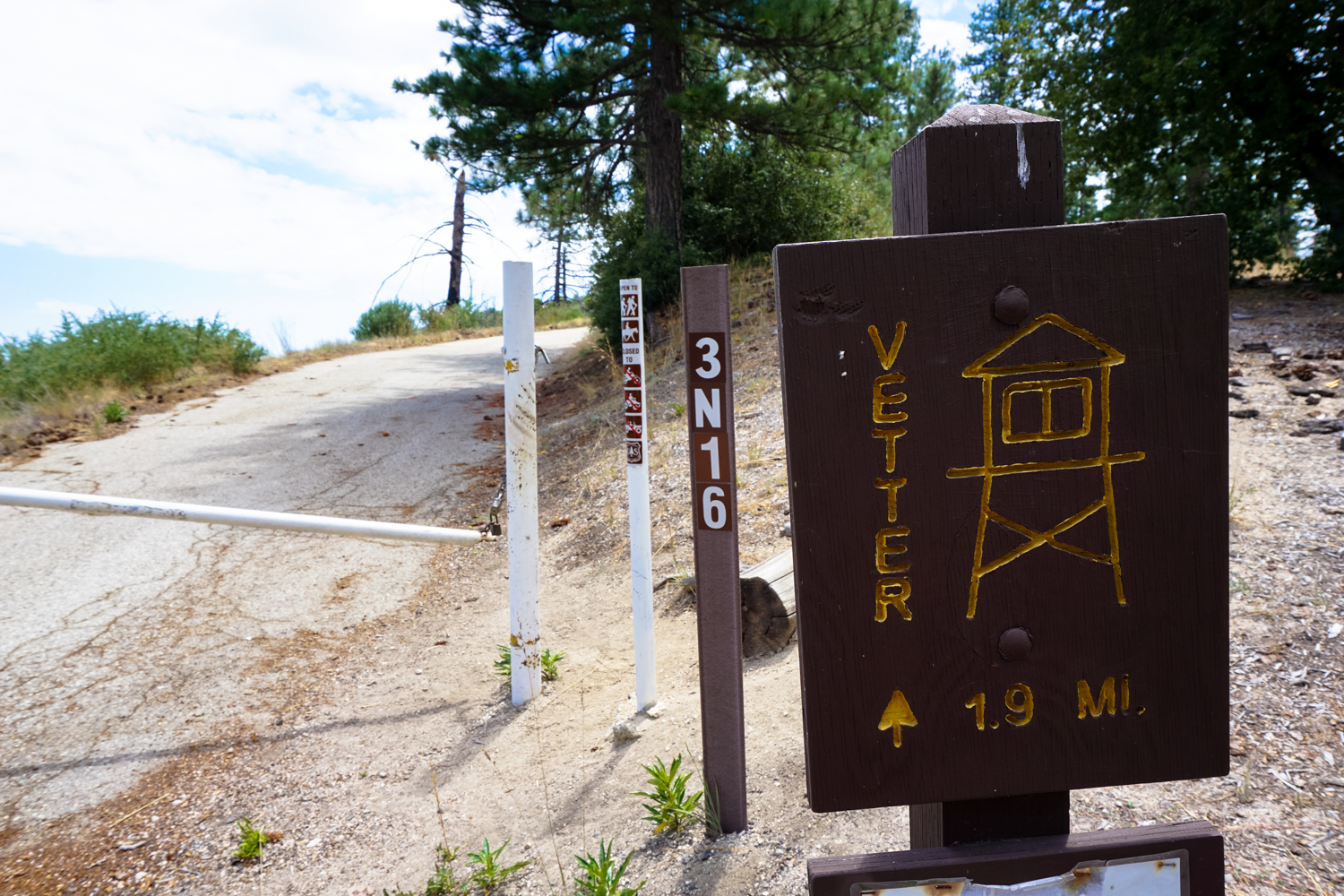 This hike is along fire and paved roads closed to most vehicles. There is a proper single track trail network here but it was badly damaged in the Station Fire and many parts of it still remain closed.

Take the Angeles Crest Highway north from La Cañada Flintridge about 47.5 miles to the Charlton Flats picnic area. Turn left and instead of heading down to the picnic area, stay straight and park near the locked gate on the road toward the Vetter Mountain Lookout. Display your Adventure Pass.