A trek on the Pacific Crest Trail to the most western 7000-foot peak in the San Gabriel Mountains and one of the most prominent peaks in the entire range. This route requires a little bit of snow-hiking (in the winter), some bouldering, and good backcountry navigation skills – especially since the Station Fire ravaged much of the region.

NOTE: This area was badly burned in the 2009 Station Fire. The landscape was opened but has been closed again due to proximity to the 2016 Sand Fire. Expect the conditions to be different than those represented here.

If you’re in the market for a moderately difficult, lengthy trek on the Pacific Crest Trail that avoids some of the crowds of the lower San Gabriels, then Pacifico Mountain on the north side of the Angeles National Forest might be a good stop for you. Head to the Mill Creek Picnic Area, lace up your boots, and head southeast on the PCT. 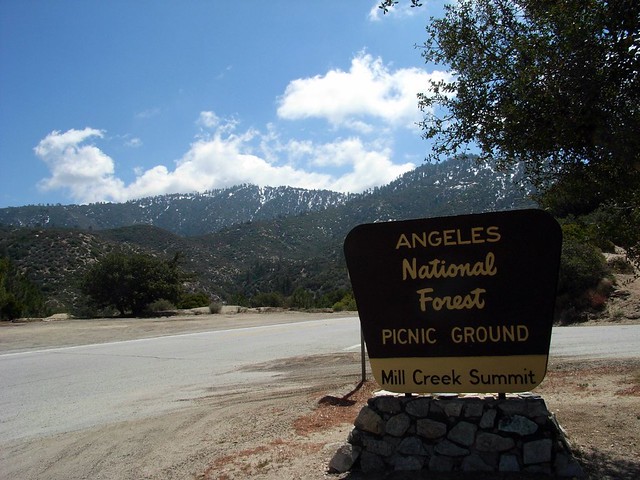 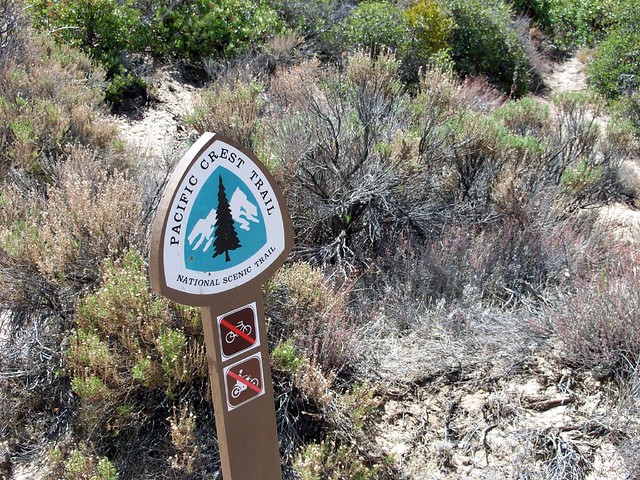 The Pacific Crest Trail runs straight through the picnic area and this was my first time hiking on any portion of it. Last year, I hiked a tiny section of the Appalachian Trail in Connecticut and was lucky enough to meet a thru-hiker on his way north. No such luck on the PCT this time, but I did get to see a note someone had scrawled on a trail sign back in 2003. 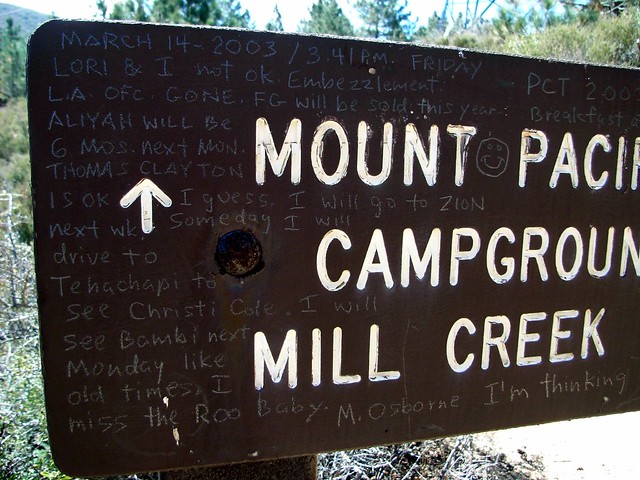 The trail itself was in great shape and very easy to follow. I guess when you’re a famous and popular trail, you get a bit more attention when maintenance time rolls around. The trail starts out in the pines typical of the higher San Gabriel elevations, which provided some nice shade and even nicer scents. 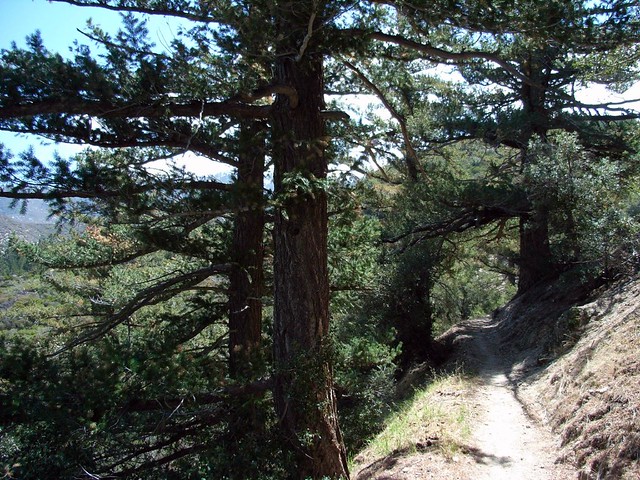 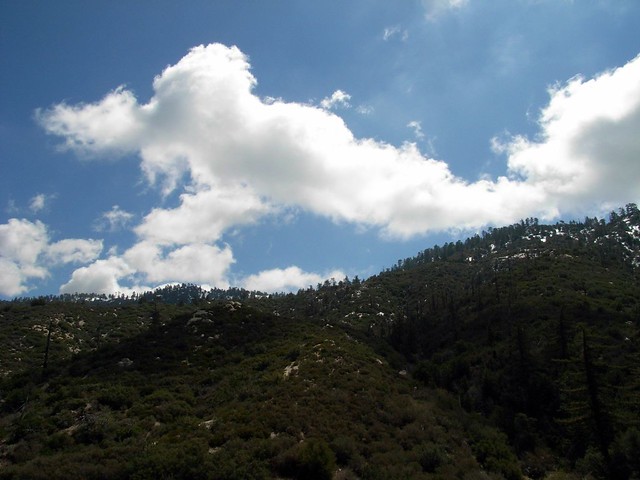 Because this part of the trail is on the north face of the mountain, it’s cooler and gets more shade than the more accessible peaks of the front range. Snow will linger here longer than in other places – and it’s more apt to re-freeze after melting a bit. If you;’re traveling in the winter be sure to take good boots and maybe even some traction devices or trekking poles if we’ve had a good snow season. 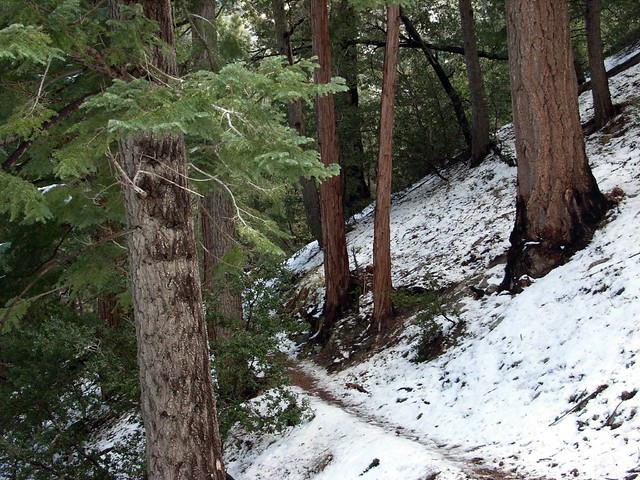 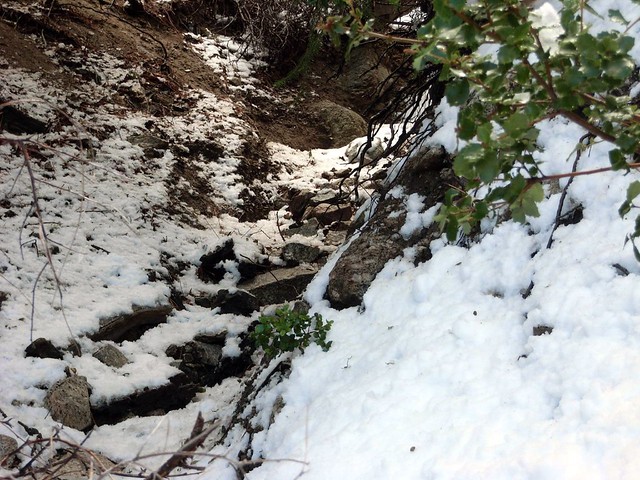 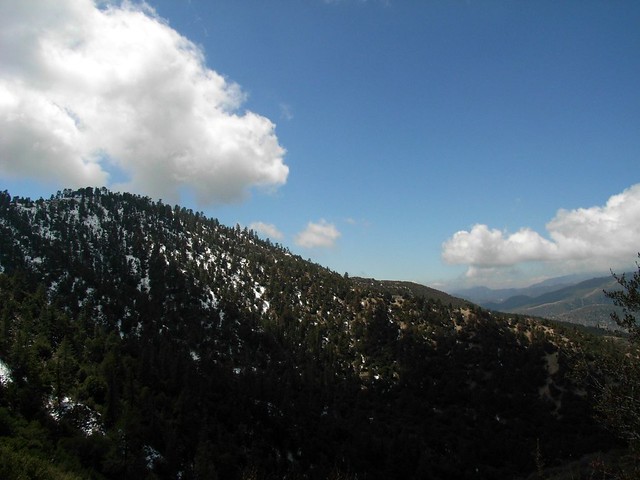 Continue east on the PCT making a very gradual ascent on a pleasant stretch of trail. At the 3.3 mile mark, you’ll come to a small flats area with some tremendous views of the peaks and valleys to your east. From here, the Pleasant View Ridge looked like it got a nice helping of snow… 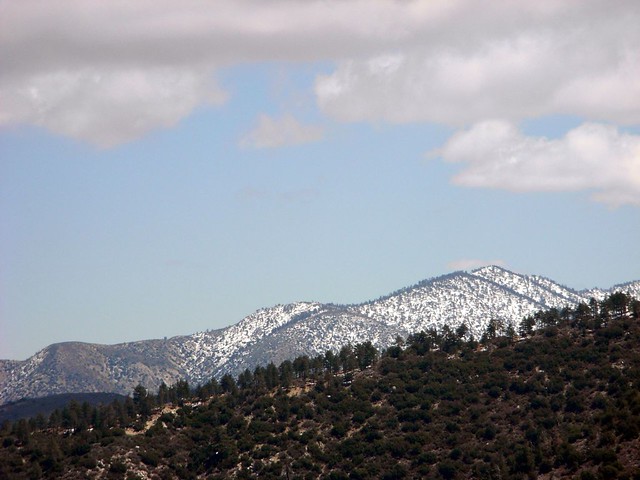 While right behind me, the closer Pacifico Mountain face had its own fair share, too. 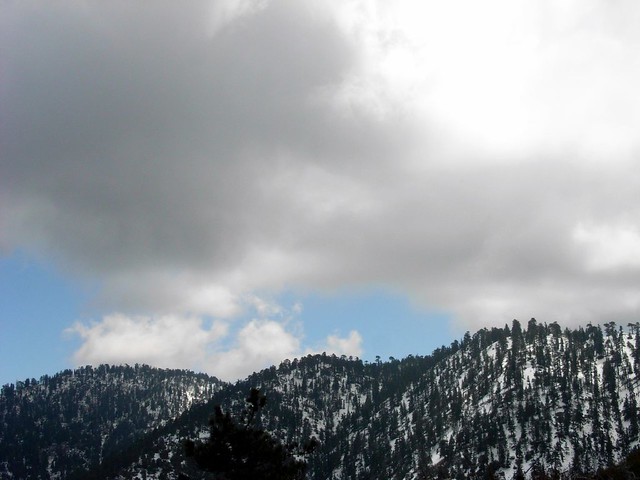 On the way up, I was following a single set of boots and dog tracks, but it looks like they only came as far as these flats. The snow was deeper now – around 4 to 6 inches – and I was the first person to step in it. I love that. 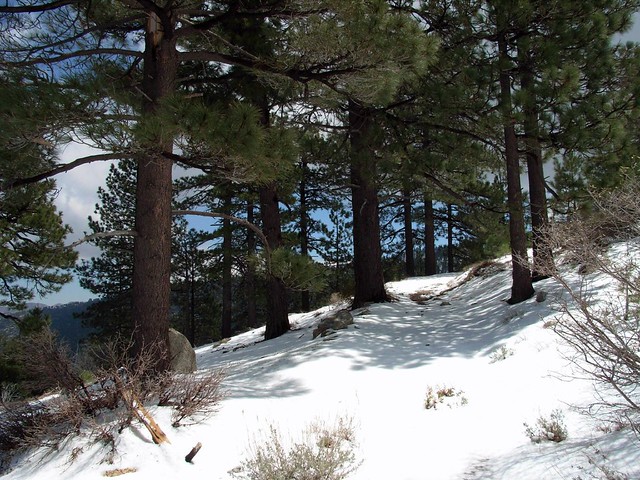 At around the 3.8 mile mark, my map showed the PCT coming very close to a dirt road, which then ascended to the summit of Pacifico. Unfortunately, I saw some old jeep tracks covered in snow and figured that was the road. The snow and slush were thinner here, but much more slippery. My trekking poles gave me good enough support to keep from slipping on anything, and when I got to a very nasty incline, they helped pull me up without sliding all the way back down. 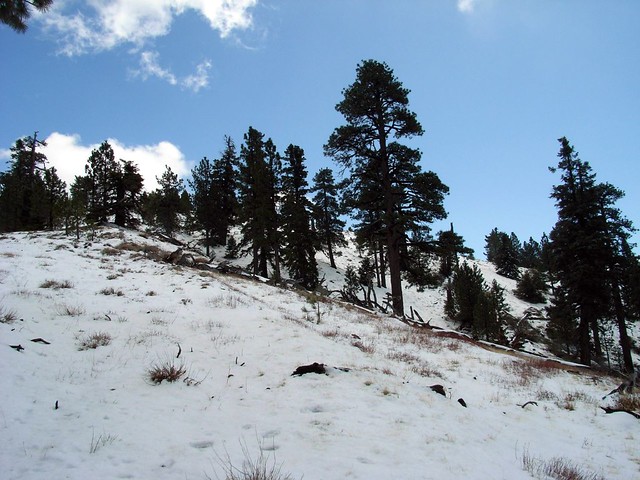 By now, I’d realized I’d turned off the PCT too early, but I committed myself to crawling up the summit and working my way over the ridge. I figured there’d be less snow than on the north face, too … Or at least, that’s the rationalization I gave myself as I huffed and puffed my way up what was by far the sharpest incline on the entire trail.

When I got to the top, I was rewarded with a bizarro landscape of jagged boulders peaking out of the snowfall. And as it was off the beaten path, I had it all to myself. 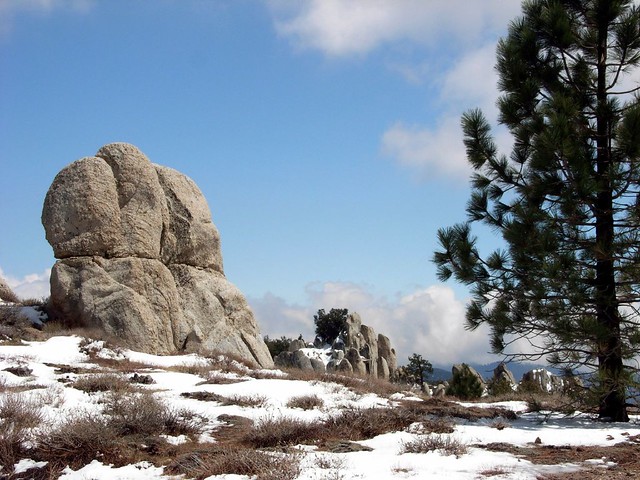 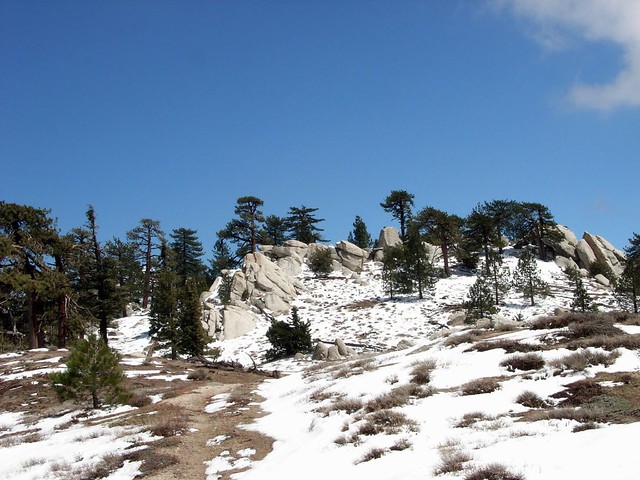 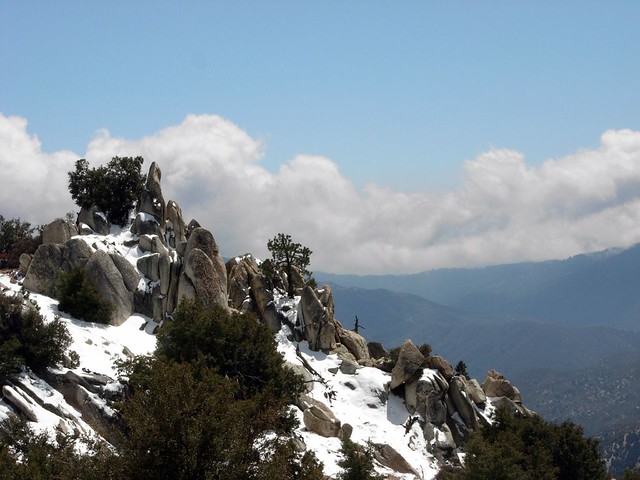 While this would be a really fun little ridge to explore in the summer when scrambling is more of an option, I backtracked to the trail and continued east. At about the 5.8 mile mark, the trail intersects with a 4WD dirt road to Pacifico Mountain. You can also reach the summit of Pacifico via a short spur trail from the PCT farther east – but the road is easy to follow and nicely graded. 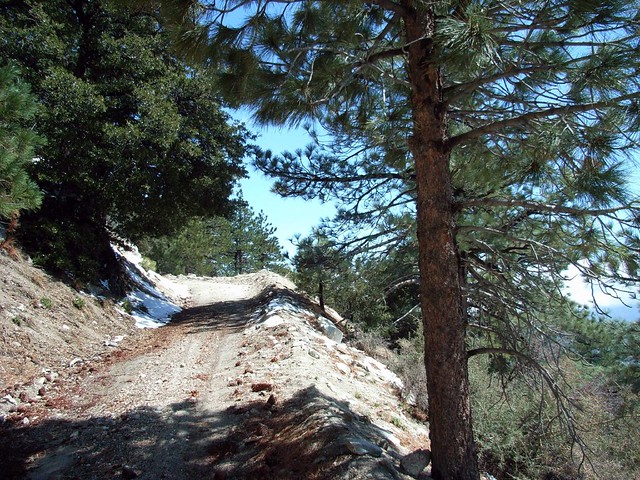 While potentially not as interesting as the trail ascent, when the road made it to the east slope of Pacifico I got some views of Pleasant View, and the Burnham-Throop-Hawkins line bathed in clouds and snow that literally made me stop in my tracks, slack-jawed. 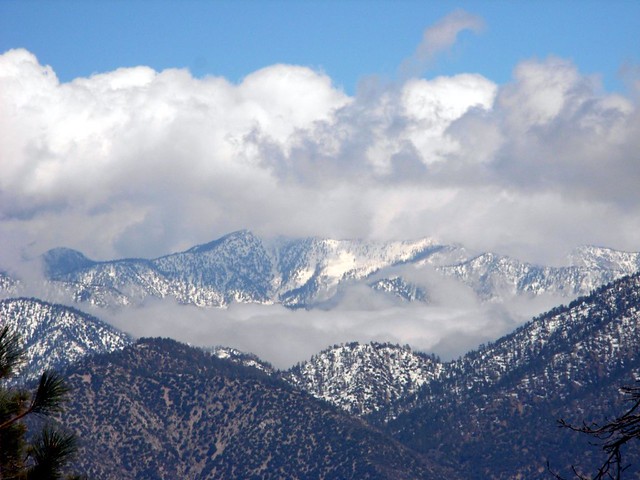 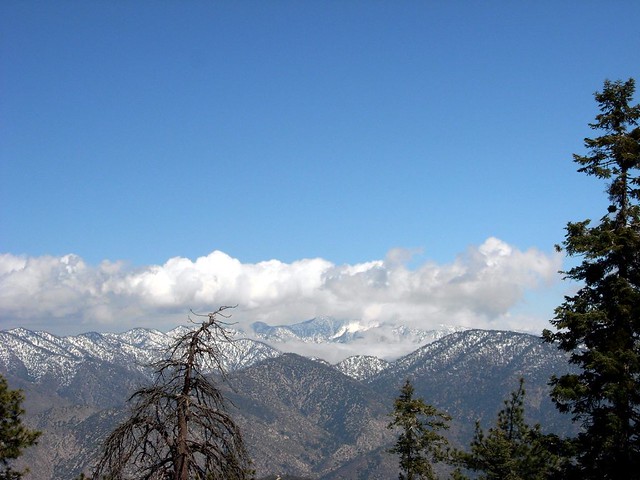 The entrance to the campground was no less dramatic, as the same angled boulders that littered the summit of its neighbor flanked the entire summit and campsite, broken up with the occasional hardy pine. 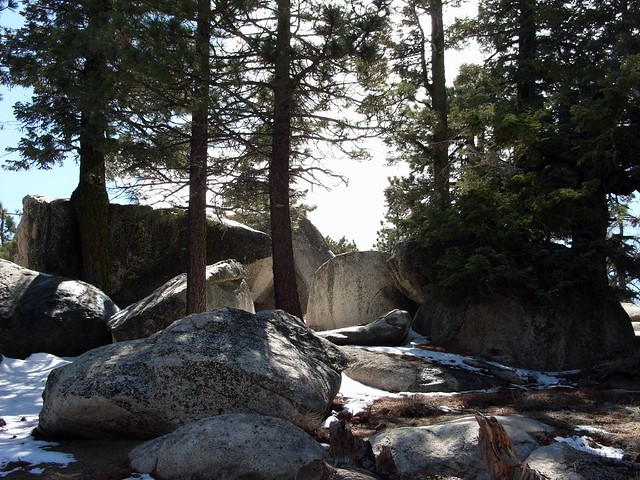 The summit – or at least, the tallest boulder I could find – is just south of the campground, facing the San Gabriels. It’s not that much higher than the ground, and is an pretty easy climb up. I’d imagine it’d be even easier if your boots weren’t soaked from stomping through the snow. 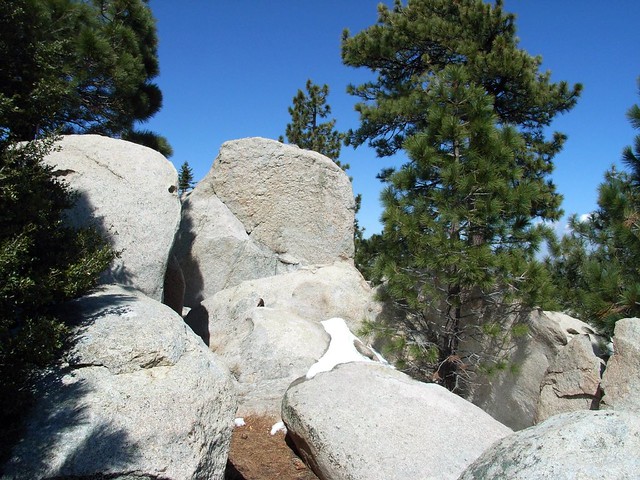 After eating a small lunch on top of the summit boulder, I walked around the campground for a bit, just to check it out. For being all the way ‘out there,’ it was actually in very good shape. Lots of picnic tables and metal fire containers, plenty of trees and rocks for windbreaks, sealed trash bins and only one Miller Lite bottle cap. And as an added bonus, every camp site has an amazing view. I guess that’s what you get when your campsite’s on a mountain’s summit. 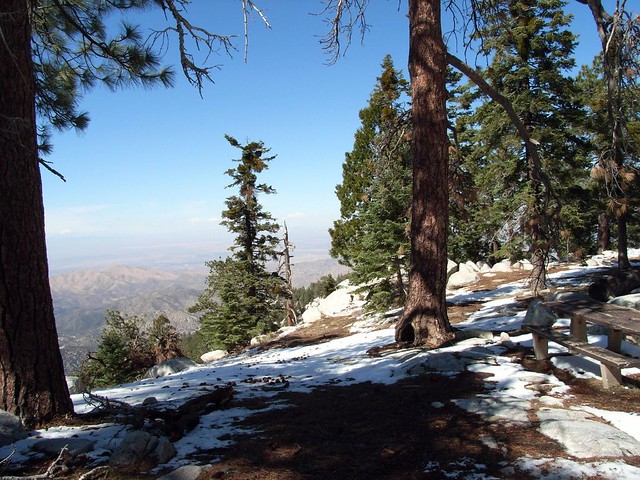 At the 9.9 mile mark, there’s a junction with another fire road that heads south toward Granite and Roundtop Mountains. Bagging those peaks will add 6 miles roundtrip, so odds are you’ll probably just skip it and keep heading back to the trailhead.

It’s an uneventful and mostly uninteresting trek back down to the trailhead on this fire road. At the 11.5 mile mark there’s a use-trail that cuts through some of the very long switchbacks the road has to take. It’s steep and rugged, but a lot more fun than just walking along the road.

The PCT is in good condition, but the area was burned in wildfires and is in need of some TLC. The mountain is also dotted by old fire roads that may be confusing.

Mount Pacifico Campground (note that it is not called 'Pacifico Mountain Campground') has 8 tent-only, hike-in campsites available first come, first served. The site is open seasonally, usually May through November. Note the campground is at 7100 feet. Call 818-899-1900 for current conditions and information.

Alright, as of last week it is absolutely perfect. If it doesn't burn there we should be fine for another year. Notice that as of today Angeles National Forrest has closed off certain roads to prevent fires because of stupid people (yes! I said that).

How steep is this trail?

Is your AllTrails set to measure cumulative elevation change? Because that'll do it.

We usually measure the difference between the high and low points and make note when there are significant bumps that would cause those numbers to be misleading. Over the years, I've found that the cumulative method leads to some extremely inflated numbers that don't always accurately portray what the trail is like. This route has a lot of little bumps on the way up, and a few little bumps on the way down, too.

I imported your GPX into AllTrails and it says the elevation gain is 2966 ft. However, this article says it's 2180 ft? That's a pretty big difference!

Yes. I hiked it today. The PCT is in good shape.

Does anyone know if this trail is open now?

Just double checked - Pacifico wasn't burned in the Sand Fire but it looks like the trailhead is *right* on the edge of the closure zone for that burn. Hopefully it will be open again soon once the fire crews put the finishing touches on the Sand Fire (as of August 24th it's 98% contained).

Tried to do this hike yesterday and the trail is closed. Bummer! Hope to do it someday.

Thank you, Casey, for a great article and pics!
Pacifico is where I proposed to my wife in 2001. I have not been there since the fire. As owner of StormSlide (www.stormslide.com), the US Forest Service's erosion control device, I really need to get up there and take a look.
Thanks again!
Jason Call