Waterfall-seekers in Yosemite have a wide variety of options to consider. Most of the time, those seekers arrive at Yosemite Valley to stand in awe before the biggest and brightest, including Yosemite Falls, Vernal Falls, Nevada Falls, and Bridalveil Falls. Accordingly, the crowds accumulating at those falls and trails can be formidable, leaving some seekers wondering if quieter experiences lie waiting at other corners of the park. These travelers would do well to look into Wapama Falls.

For anybody willing to invest some extra time and effort in driving and perhaps finding lodging in a more remote area of the park, Hetch Hetchy Valley offers a waterfall that even rivals the showstoppers in Yosemite Valley. Here, Wapama Falls cascades over the northern rim of Hetch Hetchy Valley in a thunderous spectacle that reaches its peak in late spring. With a series of footbridges passing directly below the waterfall, Wapama Falls can be a more immediate and visceral experience than the valley falls, and Hetch Hetchy itself offers plenty of scenery to spice up the moderate approach and return journey. 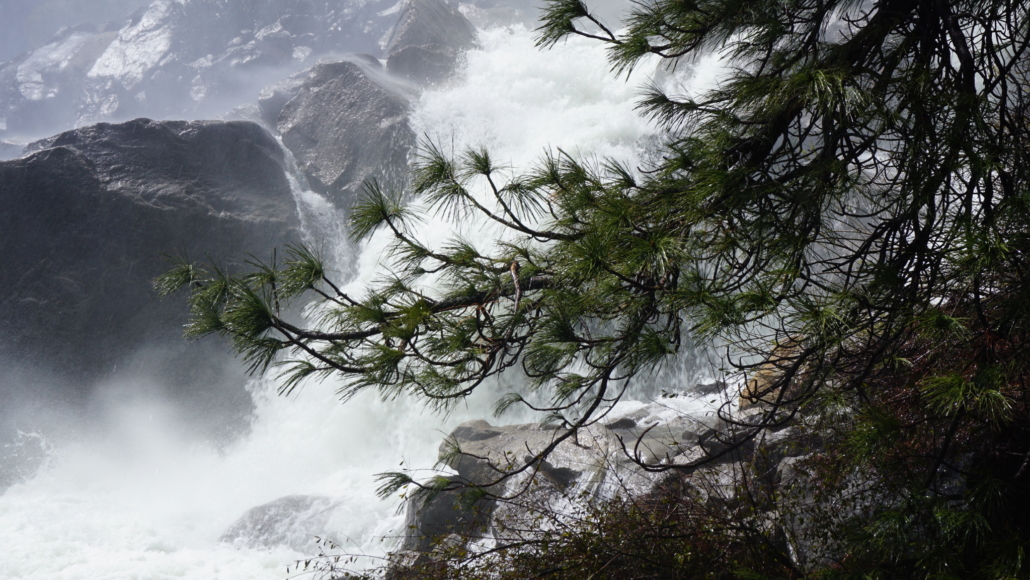 History of the Hetch Hetchy Reservoir

We can’t talk about Hetch Hetchy without first mentioning the century-long controversy surrounding the O’Shaughnessy Dam. During the first half of the 20th century, engineers and municipal water companies sought ways to capitalize on the Sierra Nevada’s prodigious water supply as a means of fueling growing metro centers like Los Angeles, San Francisco, and San Diego and a burgeoning agriculture industry in the Central Valley. One of the greatest and most prized water sources was the Tuolumne River, which drained a massive section of Yosemite high country famed for huge snowfall accumulations. By damning a section of the Grand Canyon of the Tuolumne, water companies could create a massive reservoir that could provide water to the ever-thirsty metropolis of San Francisco.

Yosemite Valley had already attained half a century of fame by the time water companies set their sights on Hetch Hetchy. Through the efforts of people like John Muir and Galen Clark, Yosemite Valley had received the necessary government protection and thus avoided becoming a reservoir. John Muir, having been an integral part of Yosemite’s protection, fought his final conservation battle by attempting to reinforce and achieve the same protection for Hetch Hetchy Valley, which he considered a rival to Yosemite Valley. 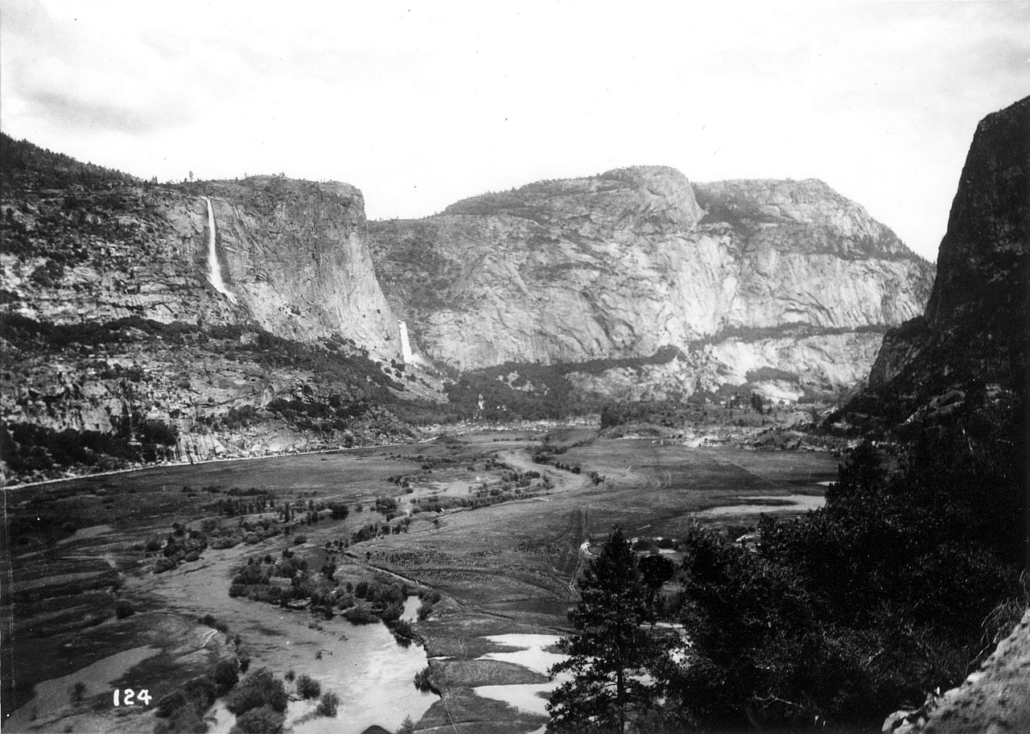 Even though Hetch Hetchy was already a part of Yosemite National Park, President Woodrow Wilson signed the 1913 Raker Act authorizing the building of the O’Shaughnessy Dam, provided that the resulting water and hydroelectricity be utilized by public interests. Muir lost his final battle and passed away shortly after. For over a century, conservation groups have called to restore Hetch Hetchy, even as hydropower and water storage has benefited California’s population (and led to decades of legal wrangling between San Francisco and PG&E, the latter of which continually violated the Raker Act’s provision about San Francisco accessing the water and power directly).

The legacy of the Raker Act and the O’Shaughnessy Dam is omnipresent on the route, as the resulting reservoir is in constant view reminding you that one of the prettier Sierra glacial valleys lies under millions of gallons of Tuolumne basin snowmelt. Your feelings about this episode in California history may color the experience, but even with the reservoir and some of the shadier aspects of its creation, this remains an exceptionally beautiful hike – yes, even thanks to the reservoir at times. 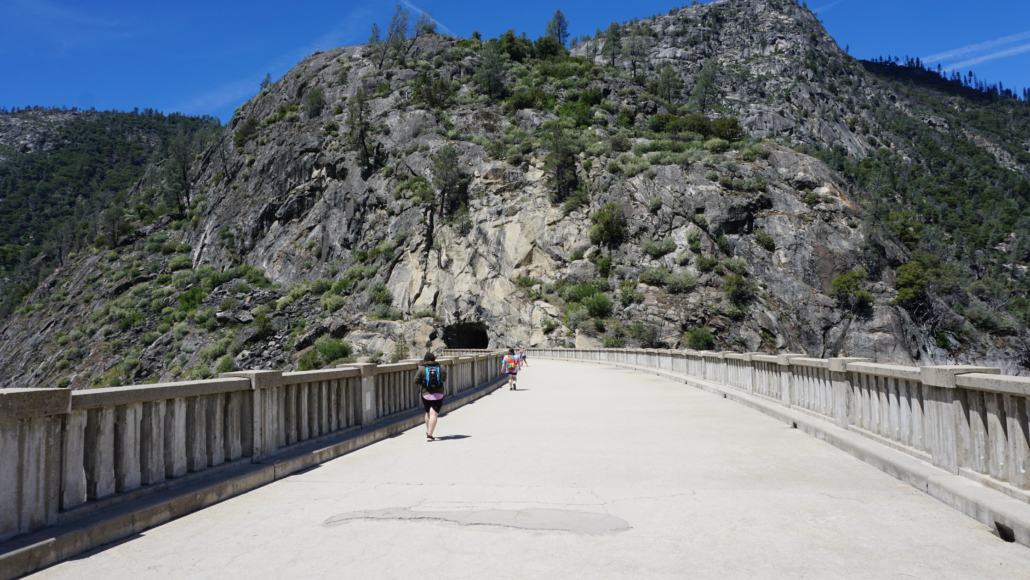 A Note on Hetch Hetchy Weather

Although Hetch Hetchy lies at roughly the same elevation as Yosemite Valley, it is consistently several degrees warmer. Furthermore, much of this route lies on an exposed south-facing slope, which will subject you to a great deal of heat. Since Hetch Hetchy’s gate doesn’t open until 8 a.m, you don’t get the option of an early start to beat the heat. During summer, this route can become uncomfortably, even dangerously hot. Consider visiting during spring or winter to enjoy this experience to its fullest.

The Hike to Wapama Falls

After locating a parking spot adjacent to the O’Shaughnessy Dam walkway/Rancheria Falls Trailhead, cross the dam to find two interesting viewpoints to kick off the hike. Look east, and you can peer across the reservoir toward Kolana Rock on the south side of the valley and Hetch Hetchy Dome on the north side. Wapama Falls spills out just to the west of Hetch Hetchy Dome, and this classic image of granite cliffs and endless blue will evolve for the duration of the hike. Look west, and you can see massive jets of water spilling from outlet channels to keep the Tuolumne River flowing to feed downstream hydroelectric plants. 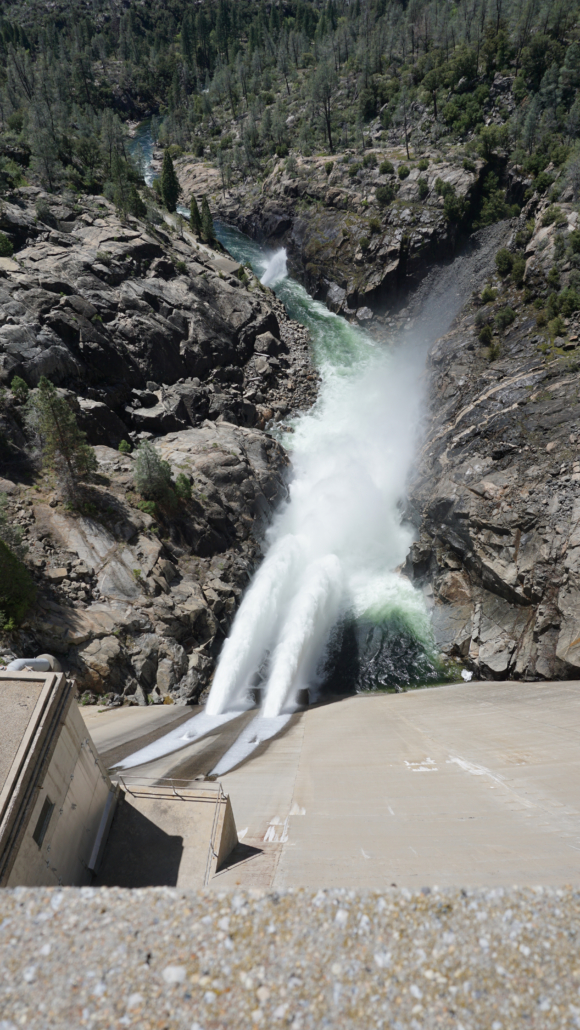 Once across the dam, pass through a long, lamp-lit tunnel. Once you emerge on the other side, the actual hiking begins as you follow a former service road above the banks of the reservoir. A canopy of live oak, bay laurel, maples, and occasional cedars and pines provide occasional shade. This pleasant, entirely flat stretch of road bed continues for 0.4 mile before the trail narrows and begins a steep, but short climb to a junction with a trail leading to Laurel Lake (1.0 mile). Keep right. 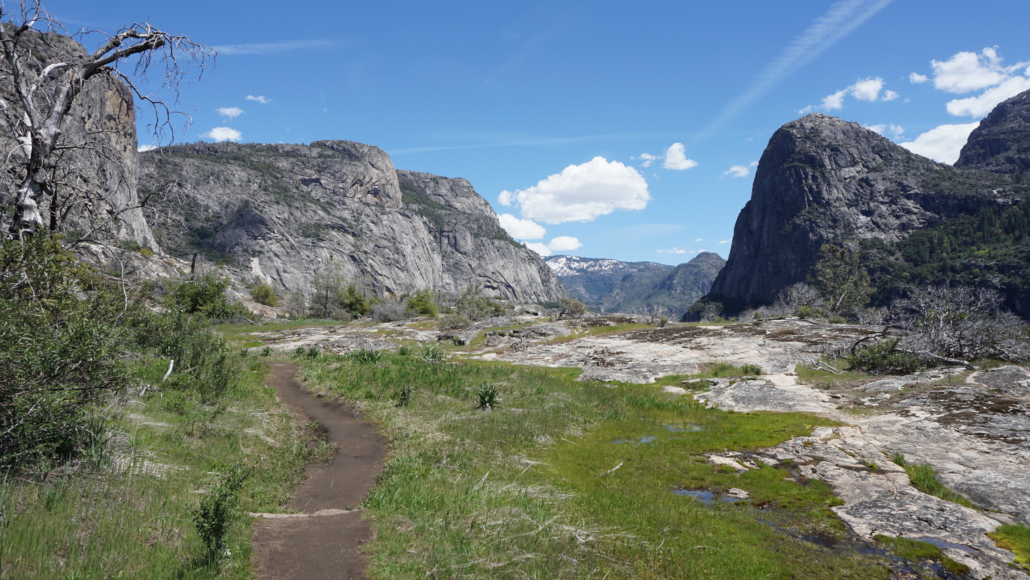 Beyond the junction, the forest cover opens up as you traverse a series of grassy shelves speckled with wildflowers during spring. Views across the reservoir toward Kolana Rock and Hetch Hetchy Dome continue to evolve, adding a great deal of scenic interest to the pleasant, easy hiking. The trail occasionally dips into sections shaded by oaks and bay trees, and you will need to watch out for poison oak encroaching onto the trails at these segments. 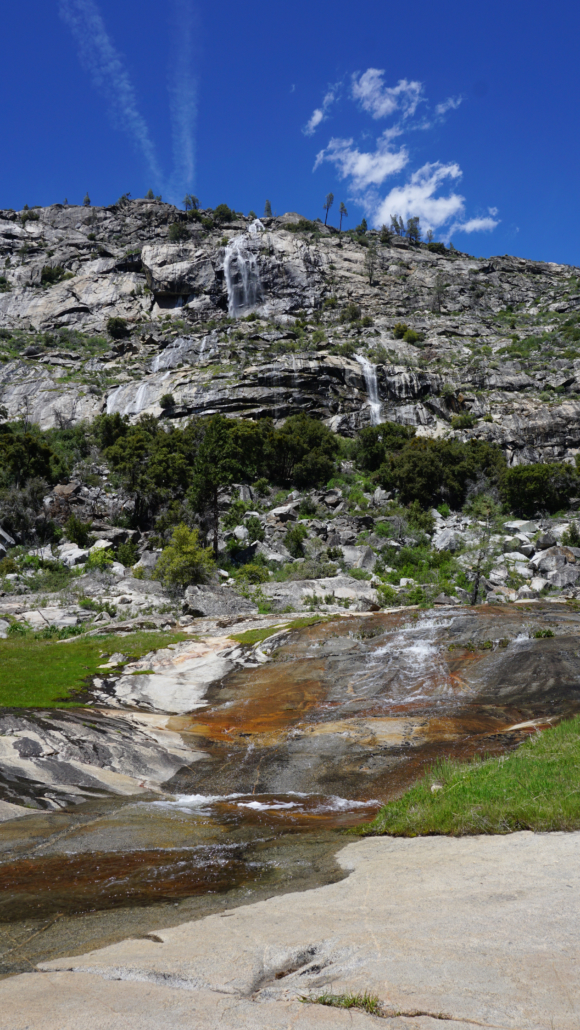 As the trail continues undulating on an eastward track, it reaches a series of pools fed by the intermittent and unpronounceable Tueeulala Falls. These falls usually run from late winter into late spring, depending on the snow pack in the high country. The falls don’t feature a heavy flow thanks to the small watershed above, but they are picturesque and create a nice opportunity for splashing around in the pools beyond their base. 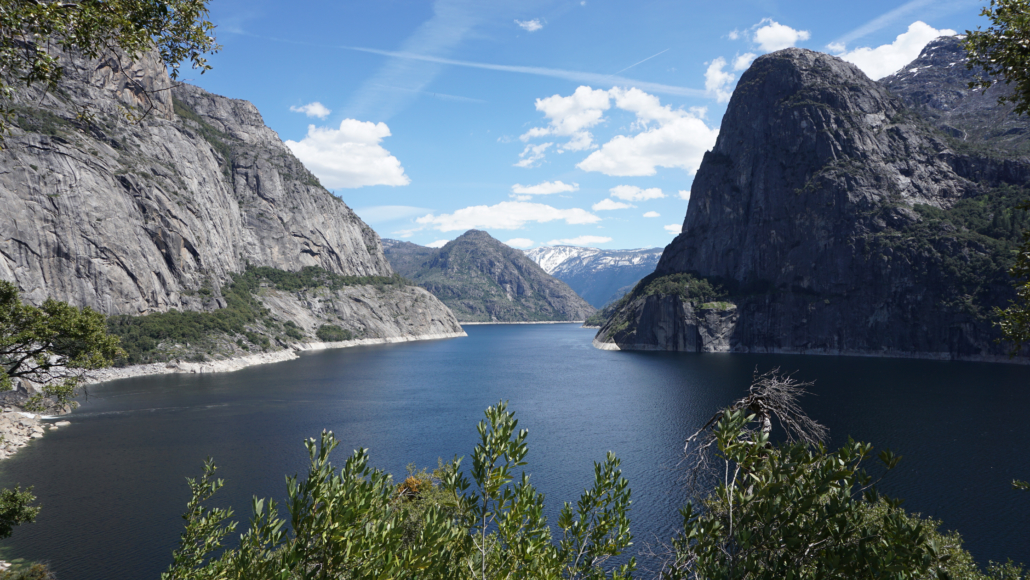 From the 1.8 mile mark just beyond Tueeulala Falls (it’s hard even typing the name), the trail begins an extended descent to first of a series of footbridges spanning the base of Wapama Falls fed by Falls Creek. Shortly before reaching the bridges (particularly during spring), you can expect water running off from the waterfall spray on the trail. The closer you get to the base of the falls, the harder it is to stay dry, and if you’re visiting during peak run-off, the waterfall flow may be so intense that crossing the first footbridge may be dangerous, even fatal as the waterfall flows directly over the bridge. That’s how close you get to the bottom of the falls, which creates a visceral experience missing from more famous falls like Yosemite, Vernal, and Nevada. 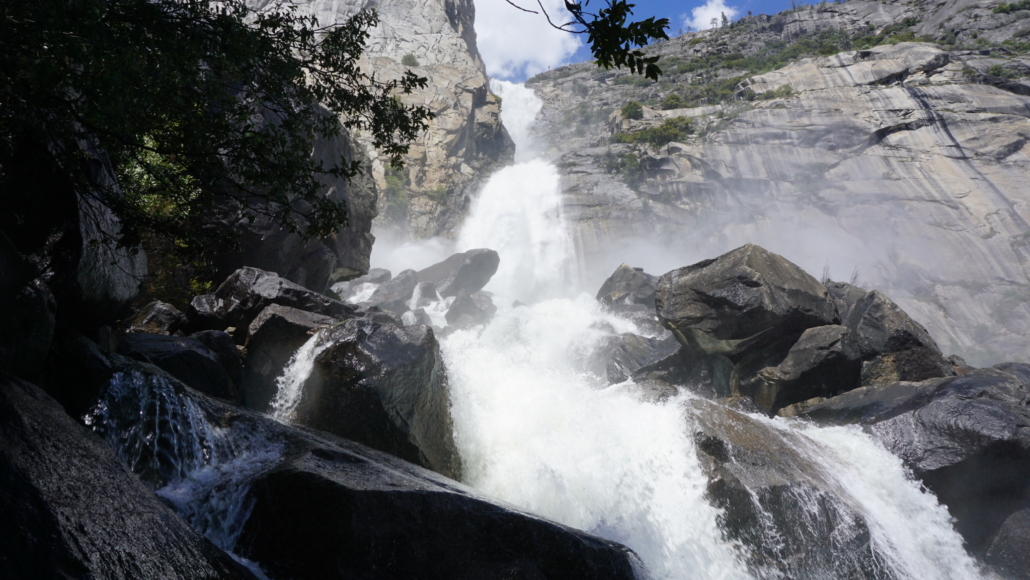 Wapama Falls from the first footbridge

If you can cross the first bridge, continue across it to a series of bridges beyond. Each bridge offers a different angle from which to consider the waterfall, and views across the reservoir toward Kolana Rock continue to impress. If you’re looking for the moderate hike indicated by the hike stats above, this is your turnaround spot. 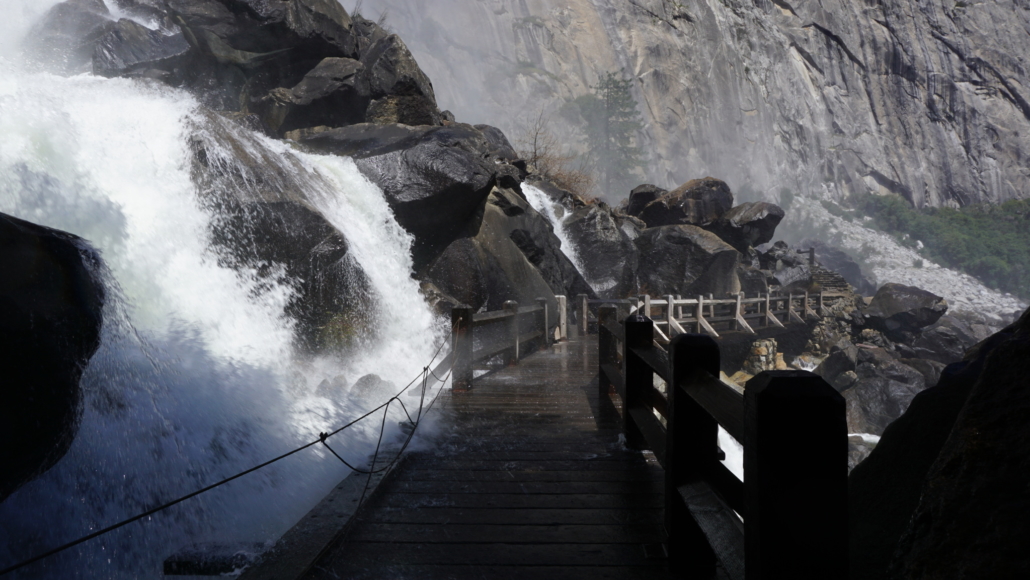 Wapama Falls keeps the footbridges nice and wet in the spring

For a more strenuous hike leading to a second waterfall, continue east toward Rancheria Falls. This extension adds another 7.2 miles of hiking with another 1,500 feet of gain over a set of steeper and more extended undulations leading to the Rancheria Falls Camping area. This is a great option for an overnight trip or perhaps the first leg of a longer backcountry trip to Tiltill Valley, Lake Vernon and Laurel Lake. Rancheria Falls is not quite as dramatic or impressive as Wapama Falls, but it’s still a nice spot with great views and good camping. It’s also one of the more popular overnight destinations in Hetch Hetchy, so arrive early if you want to get the permit. 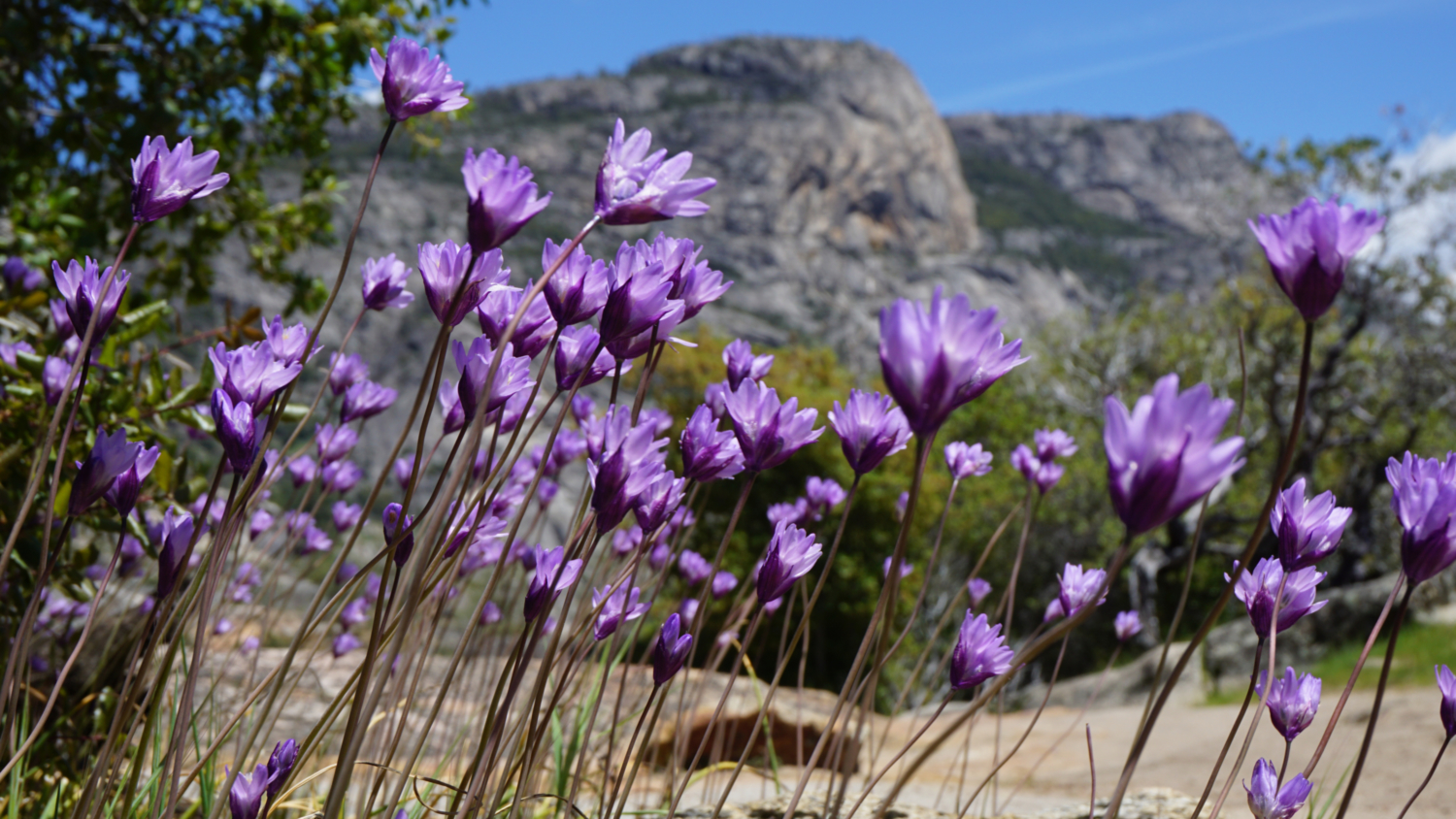 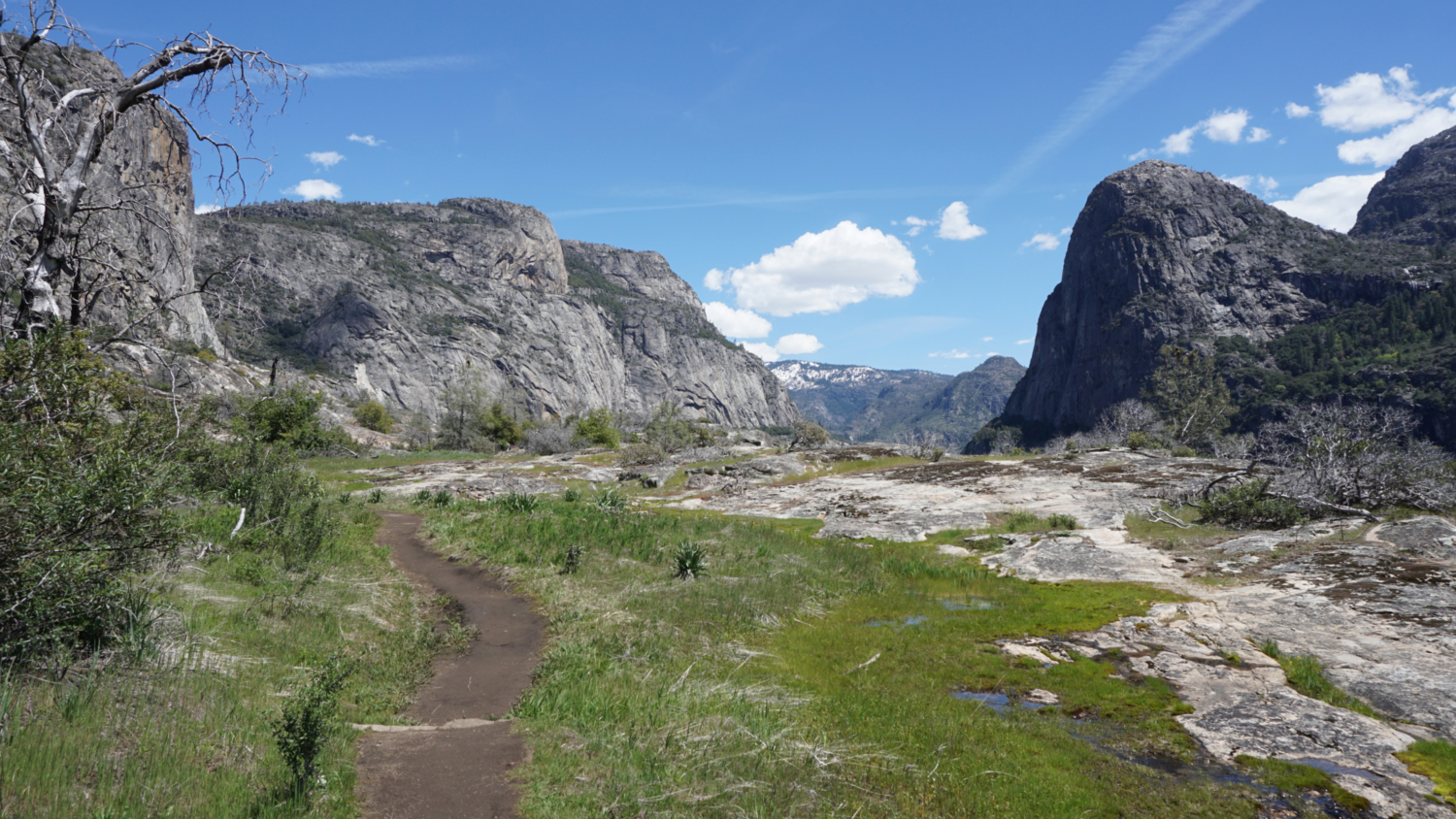 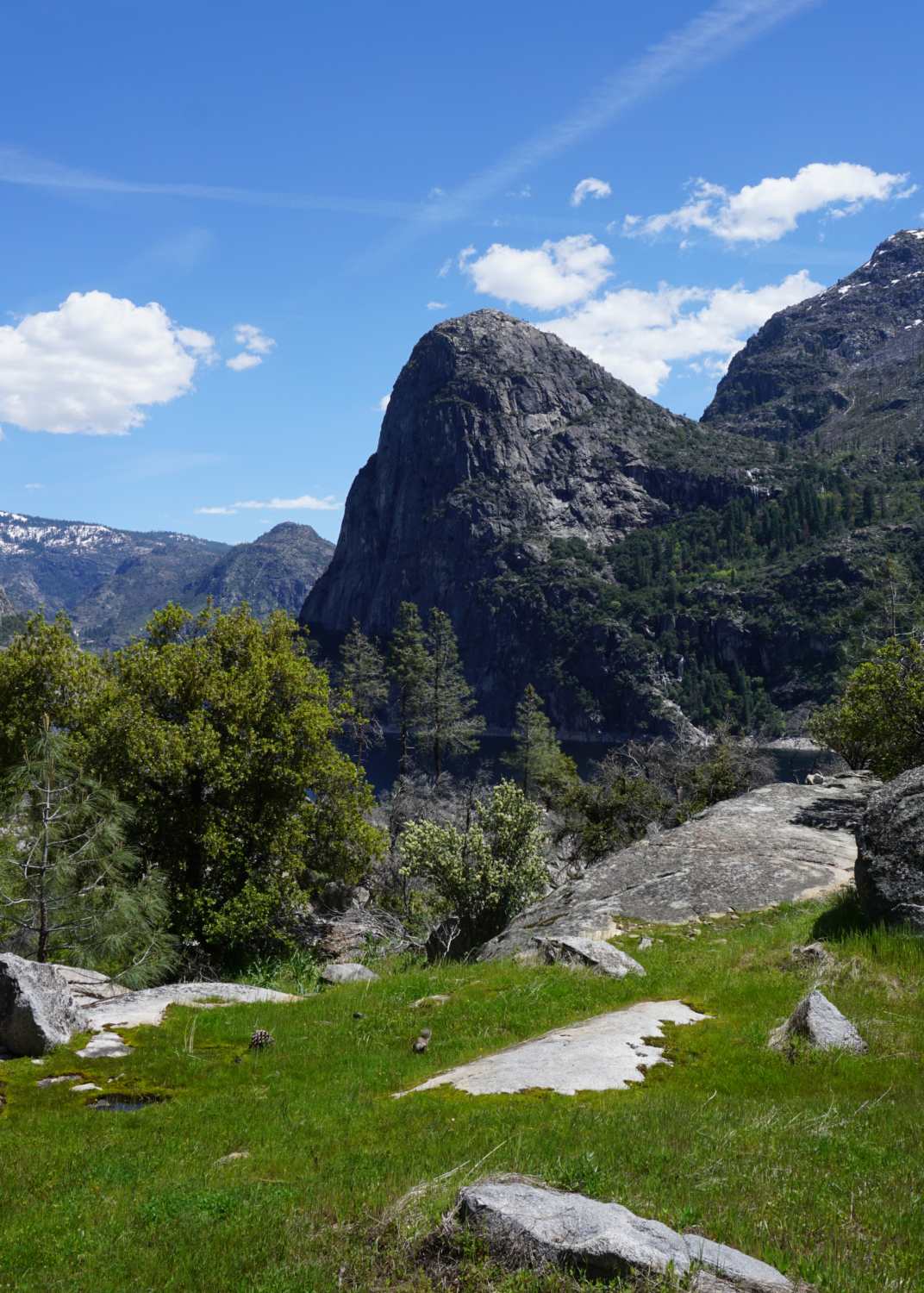 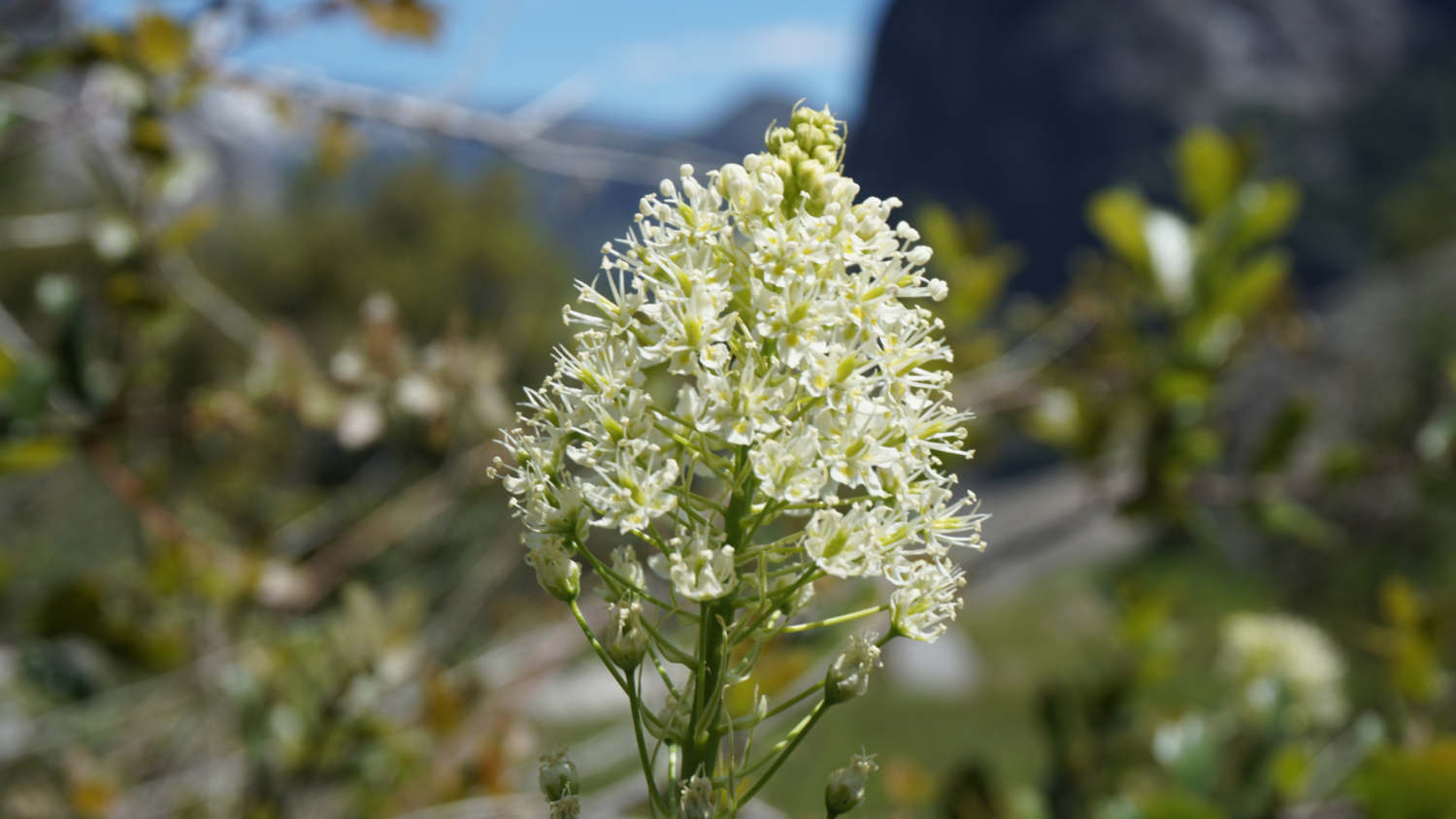 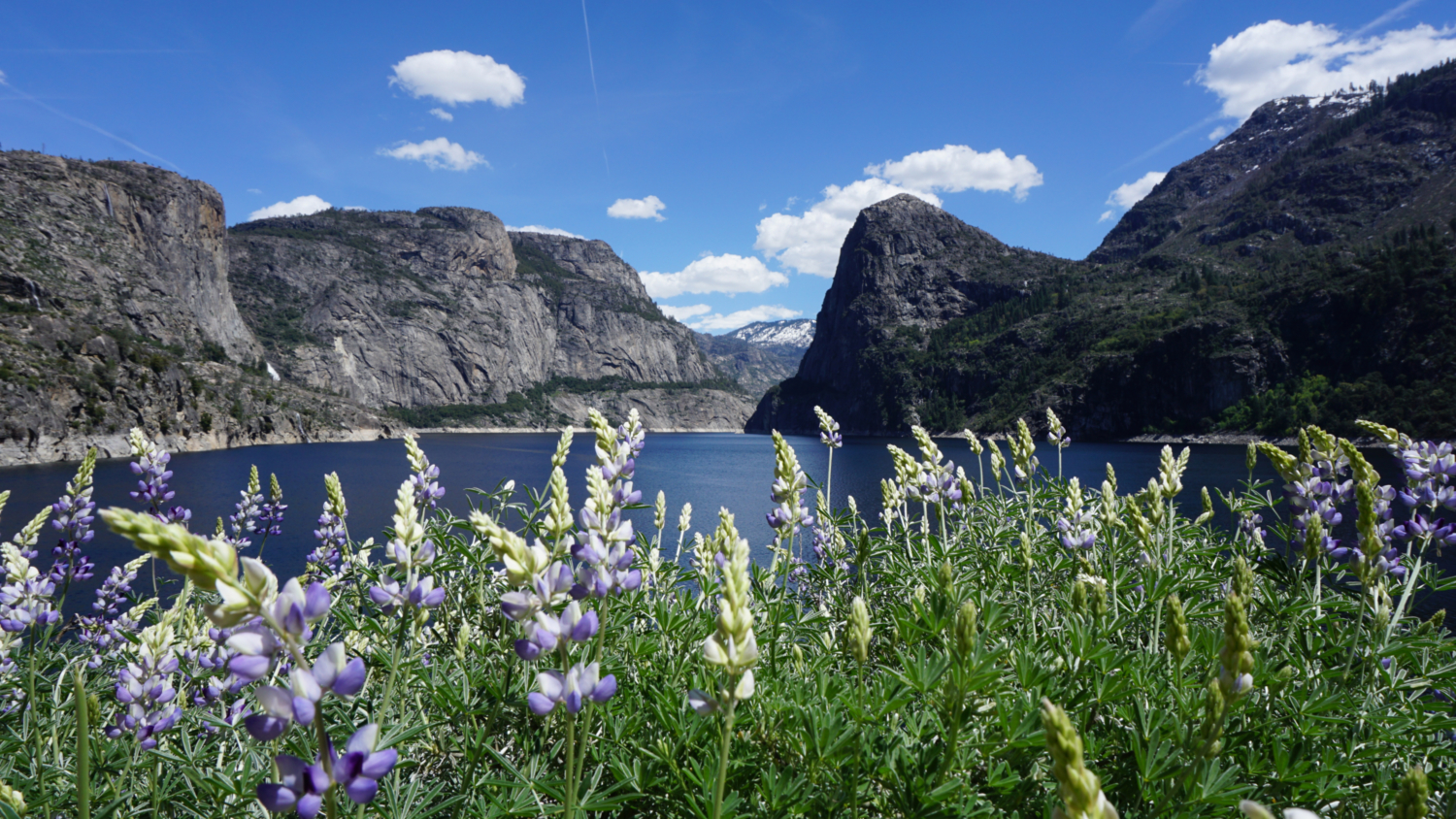 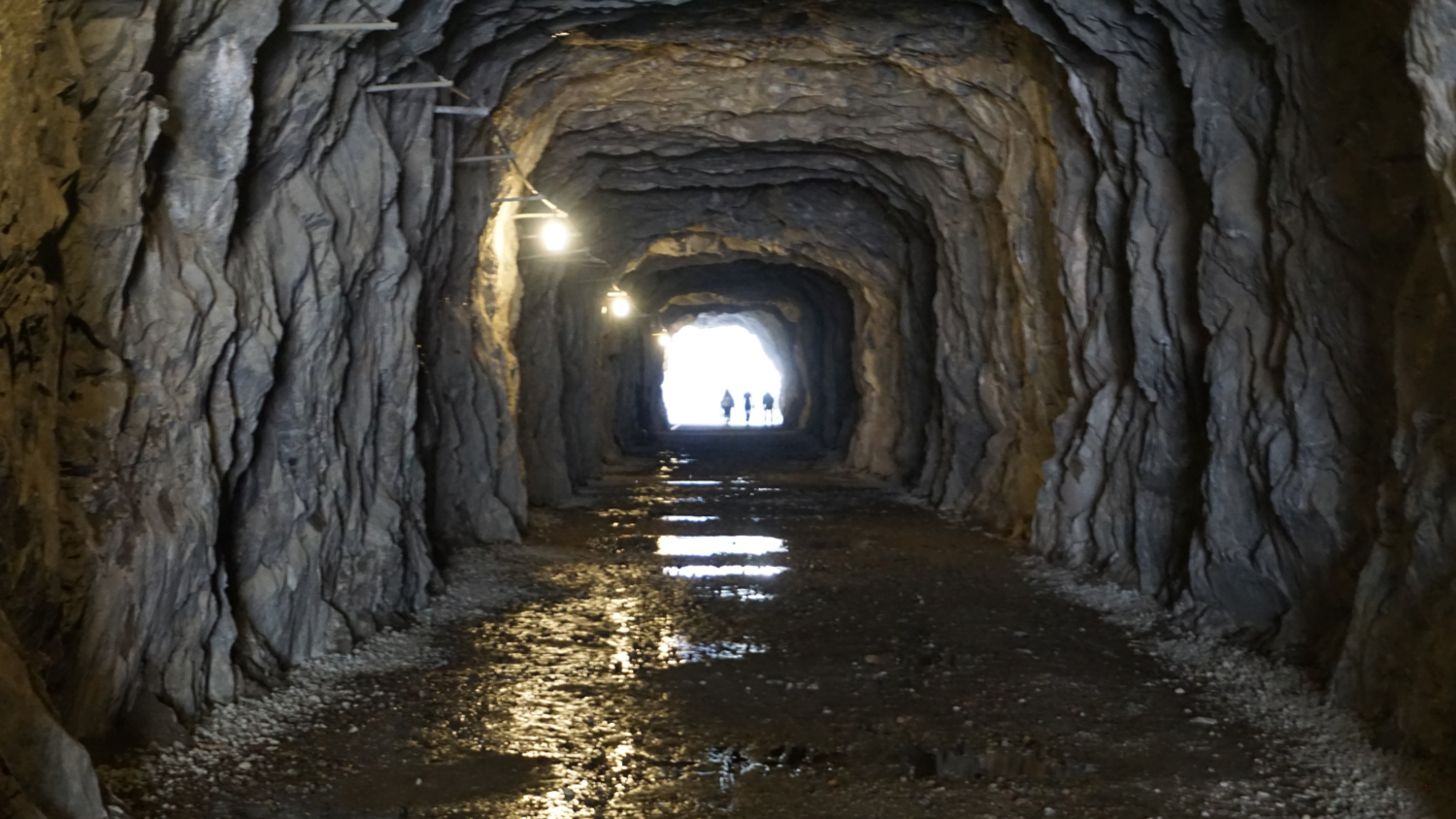 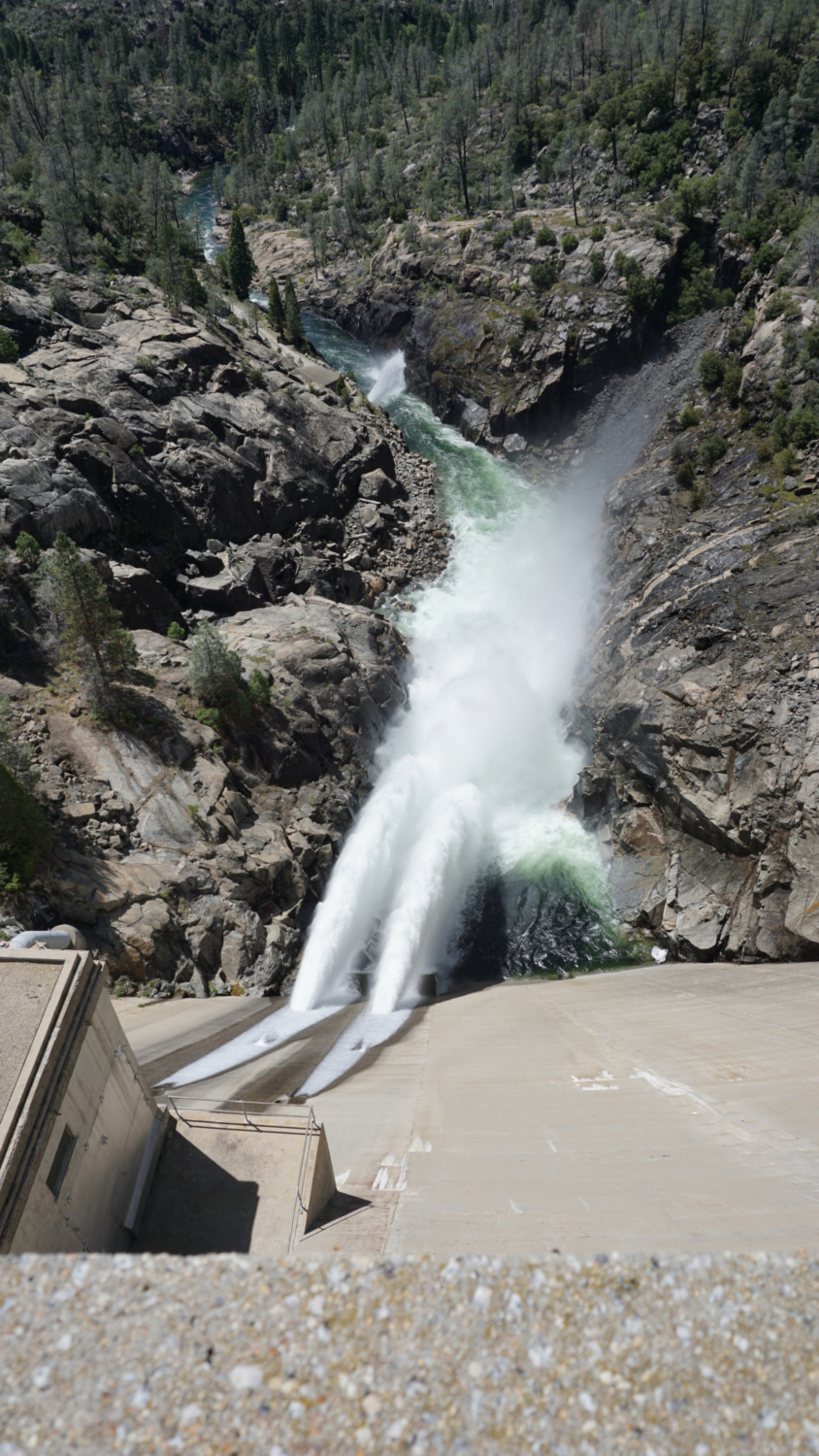 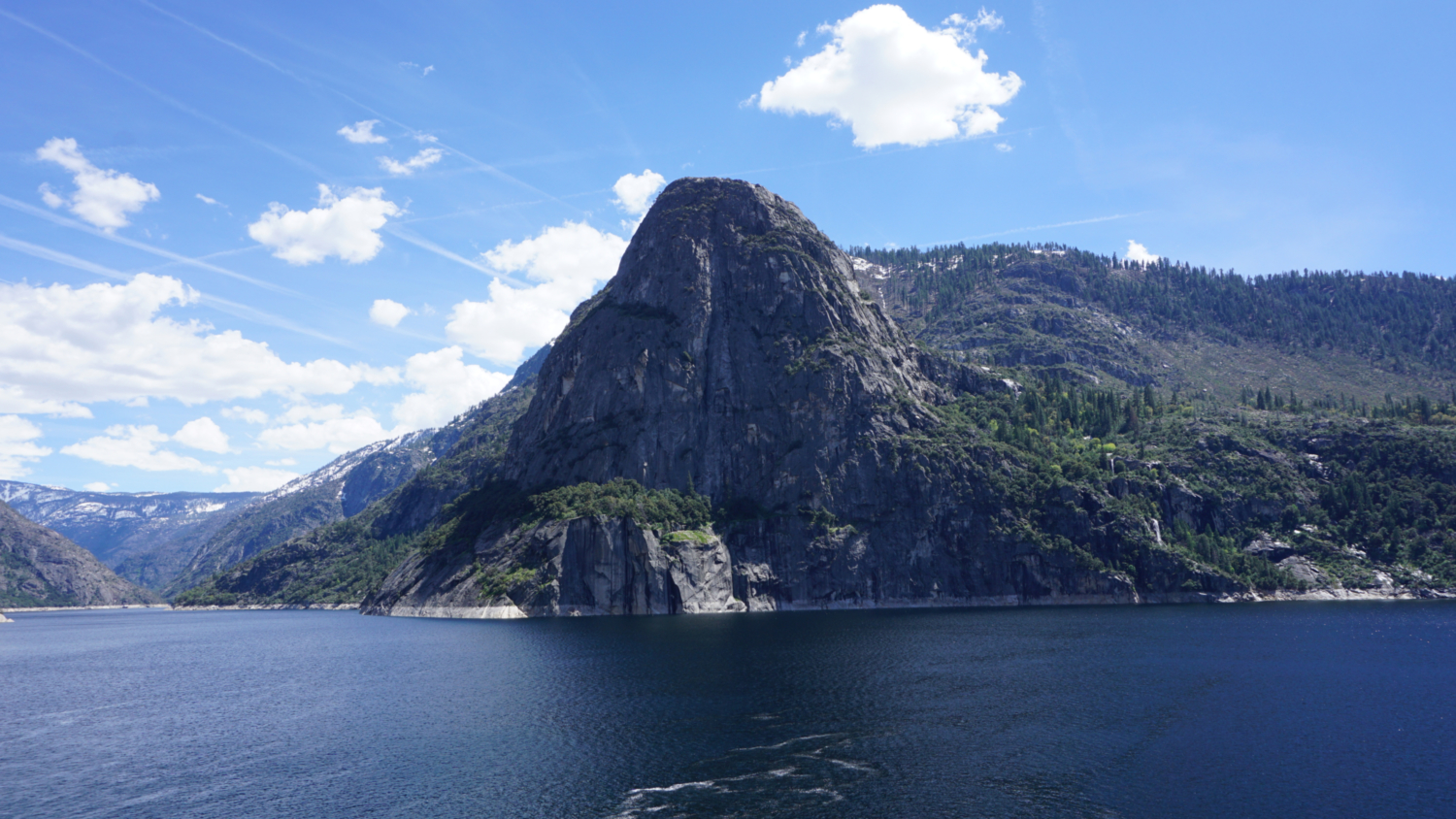 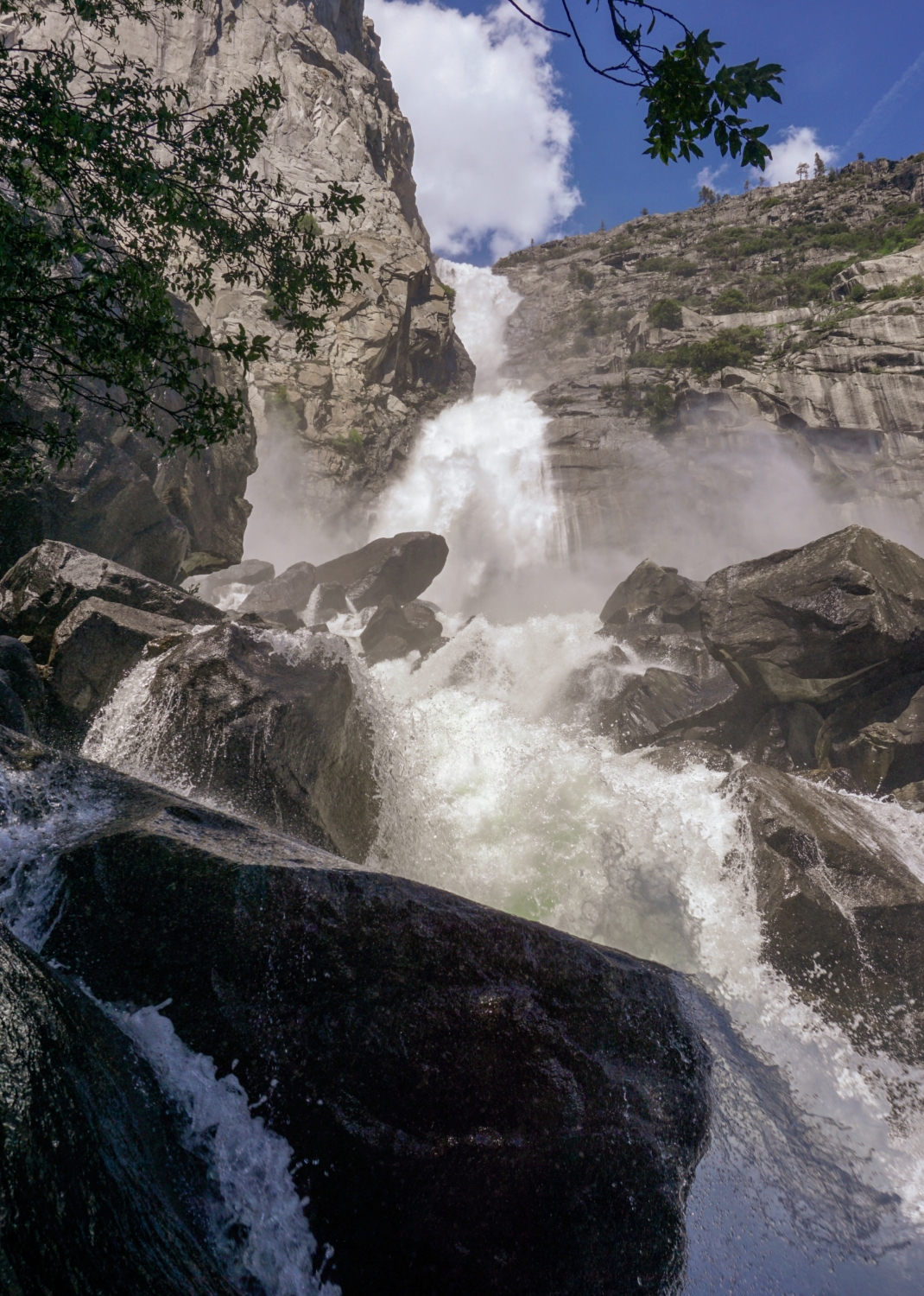 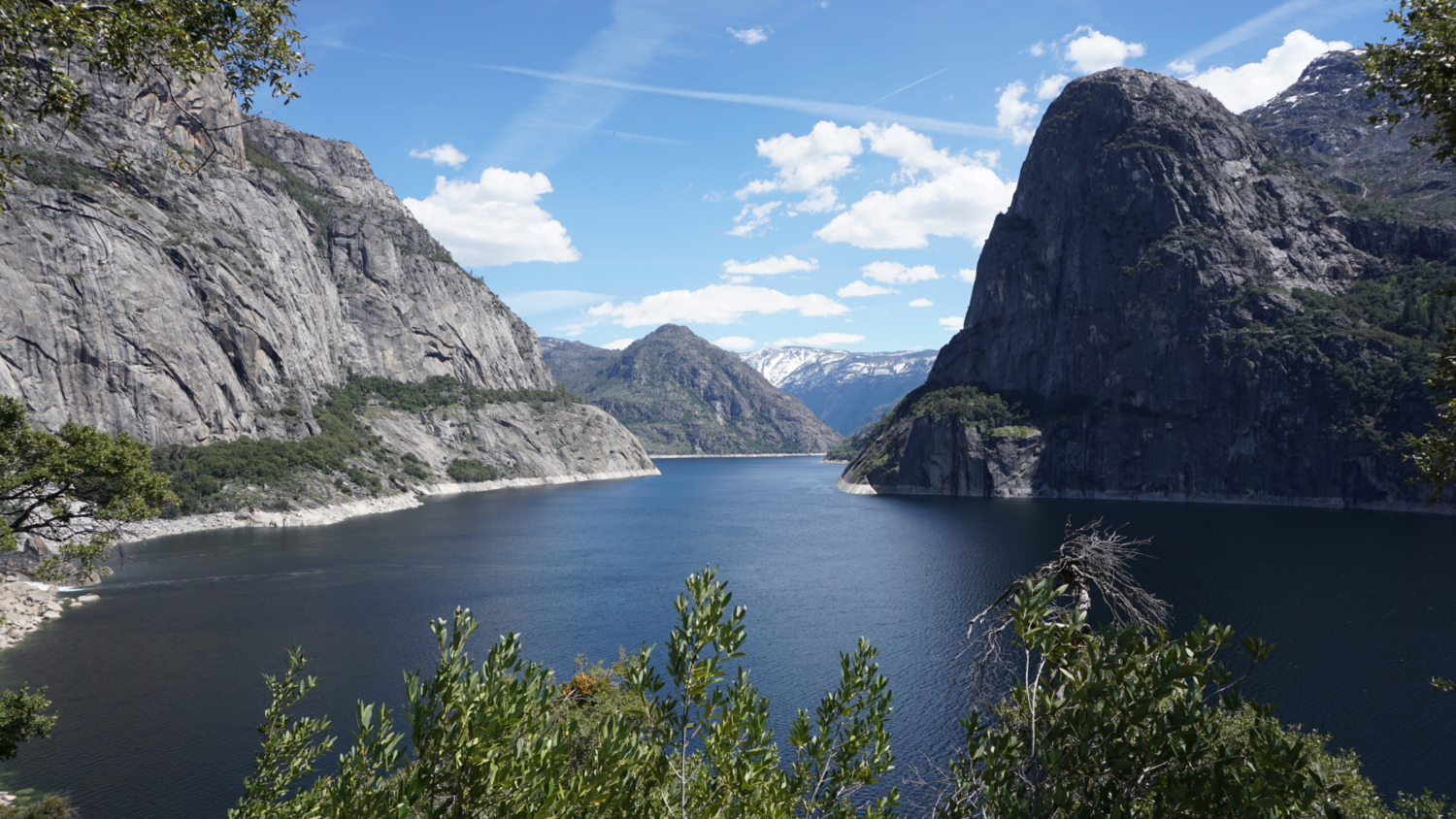 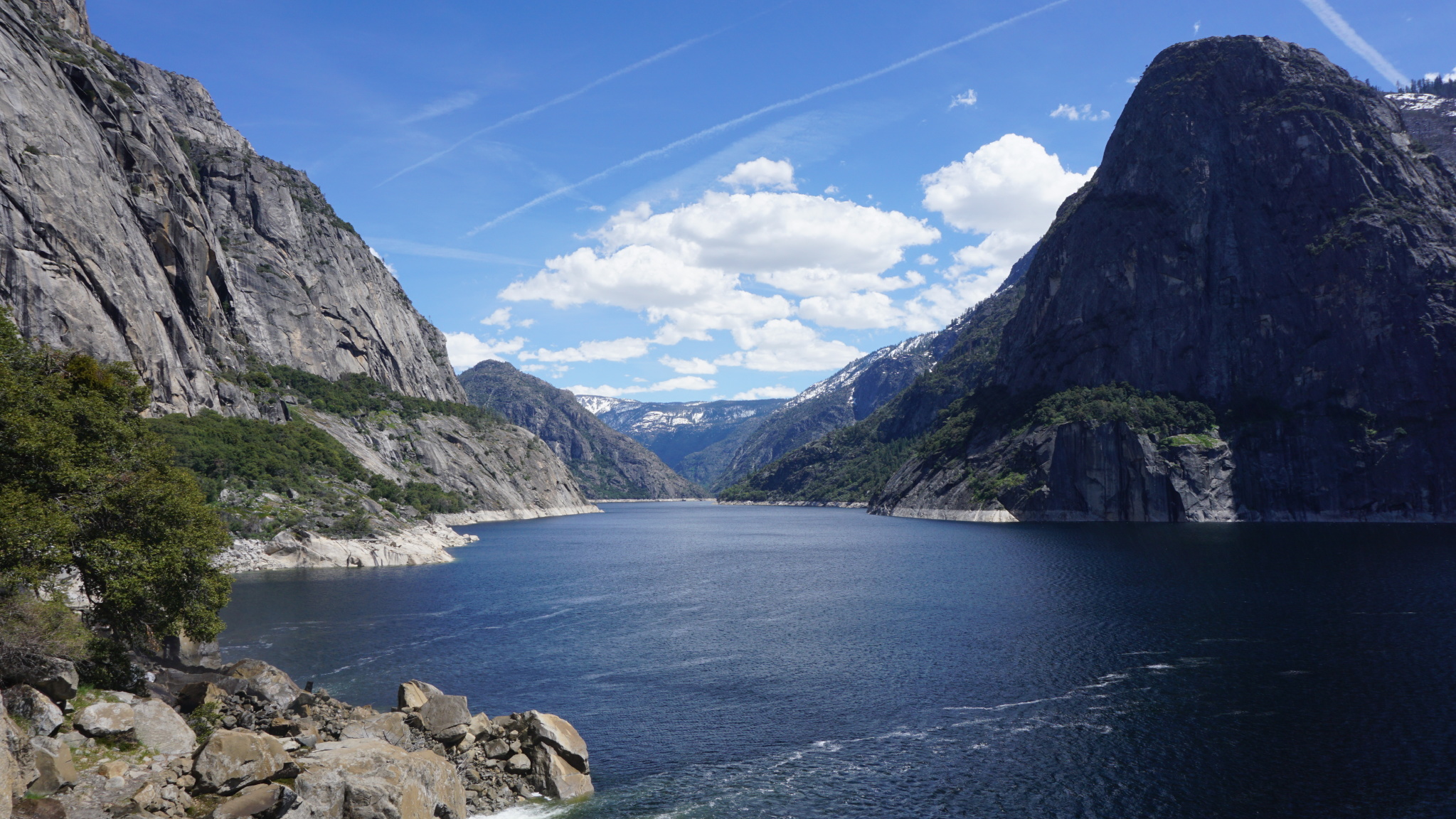 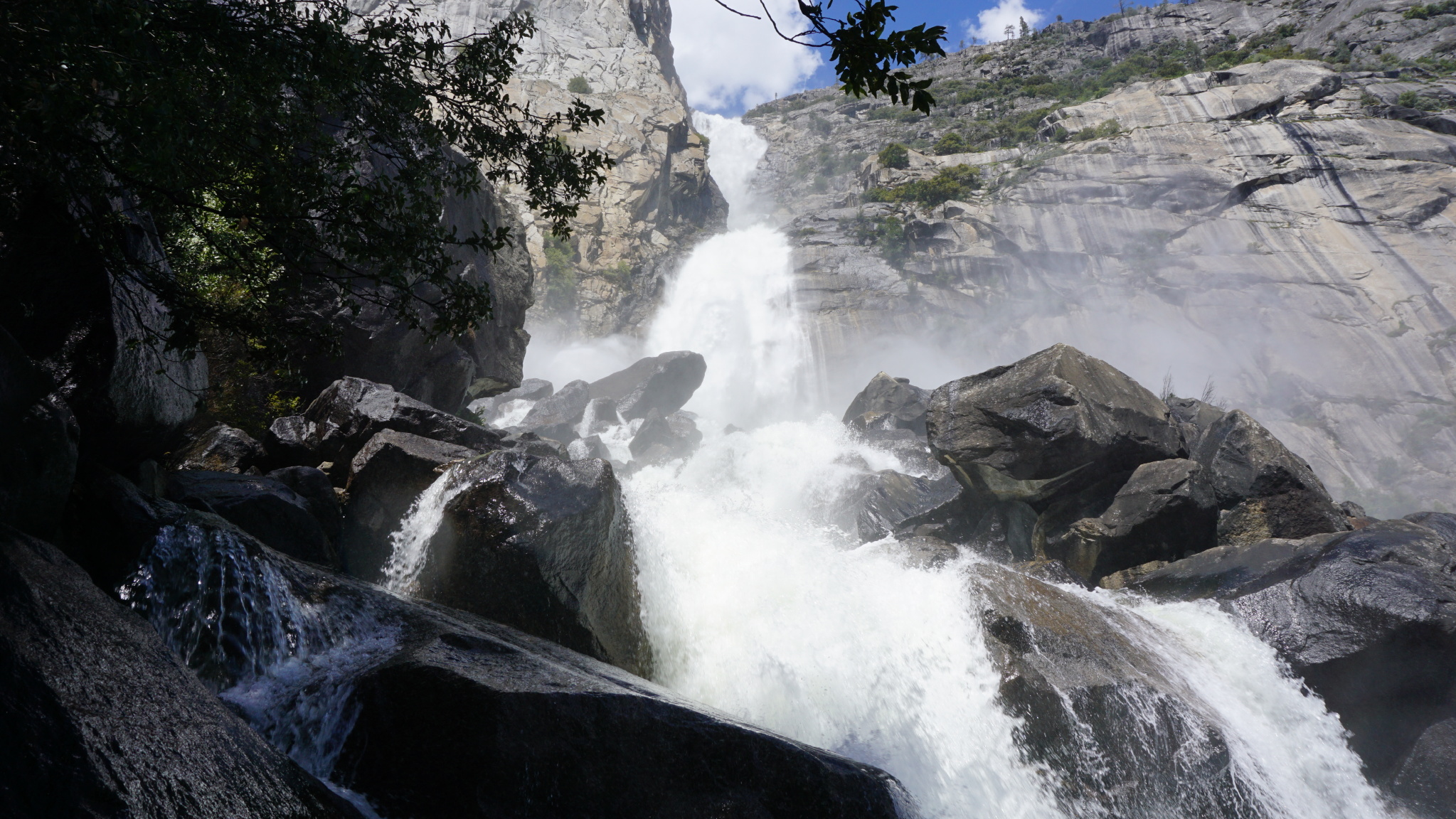 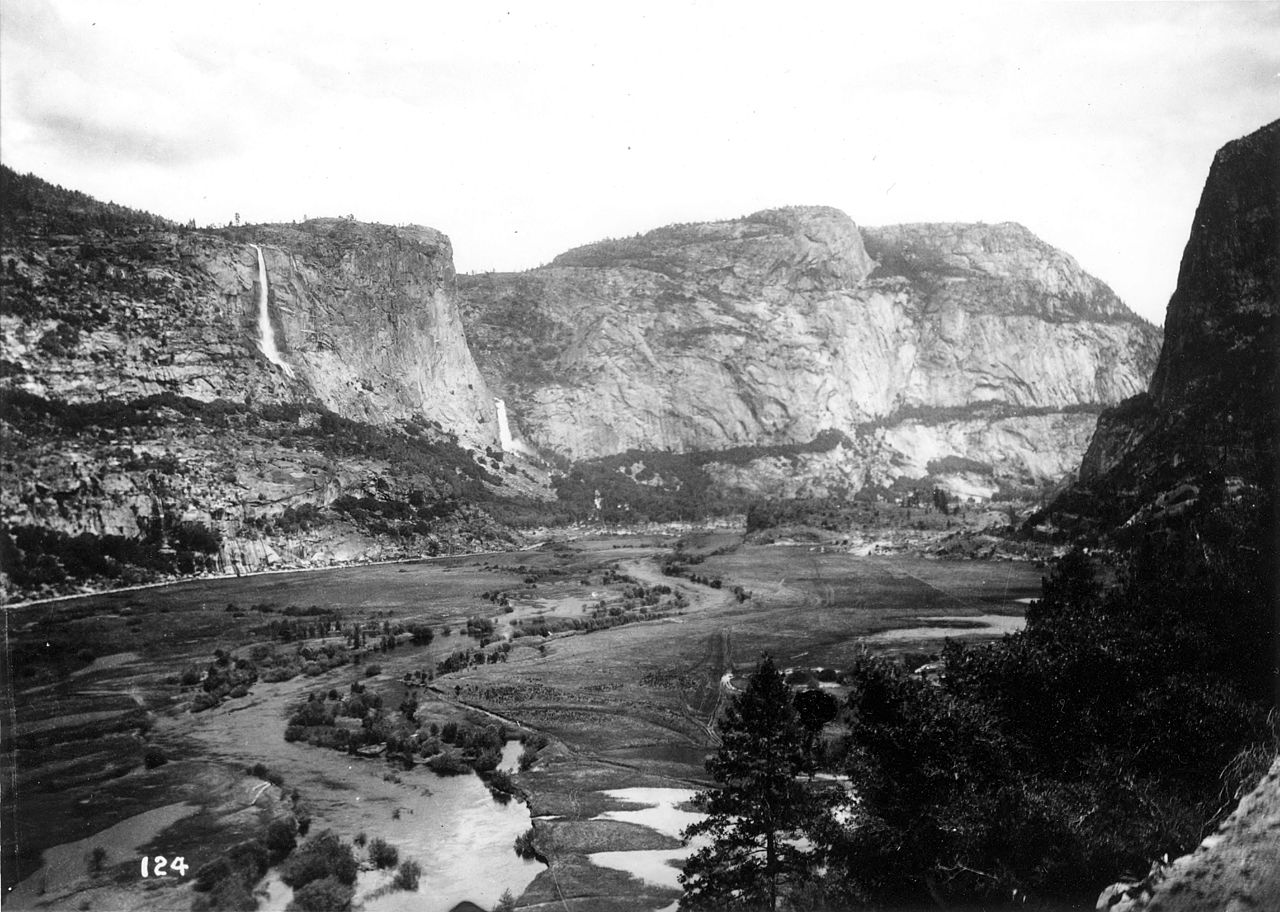 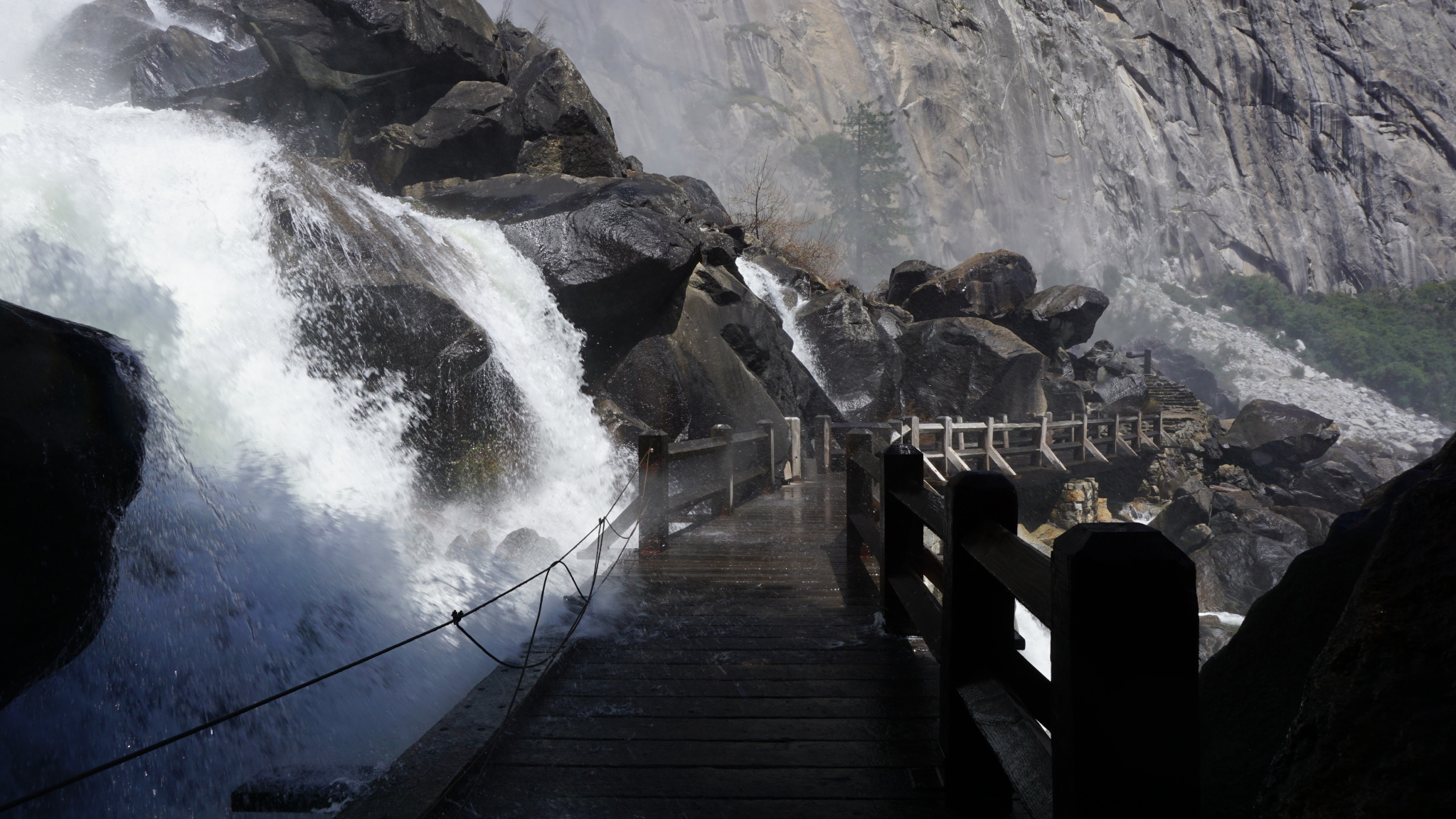 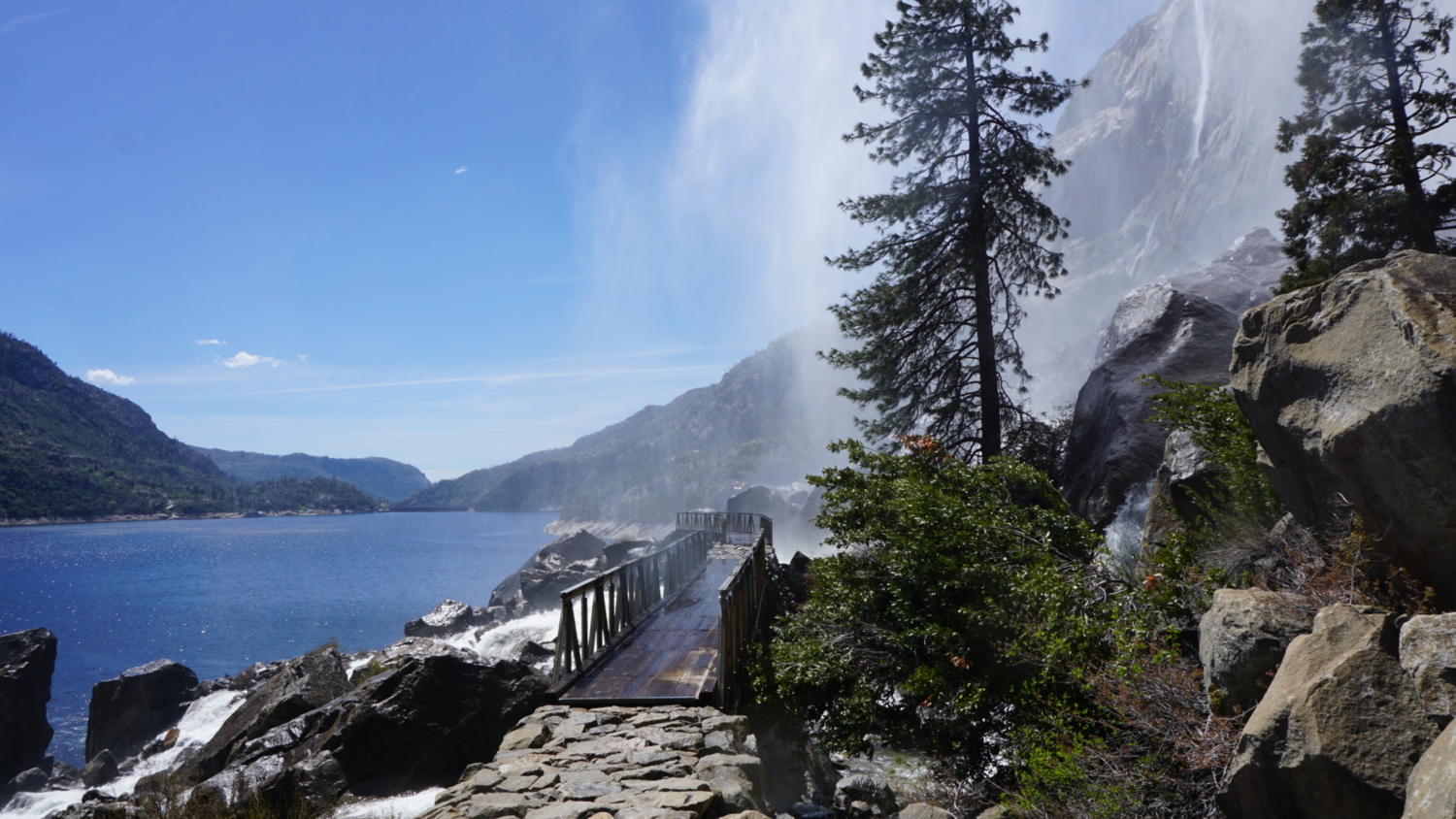 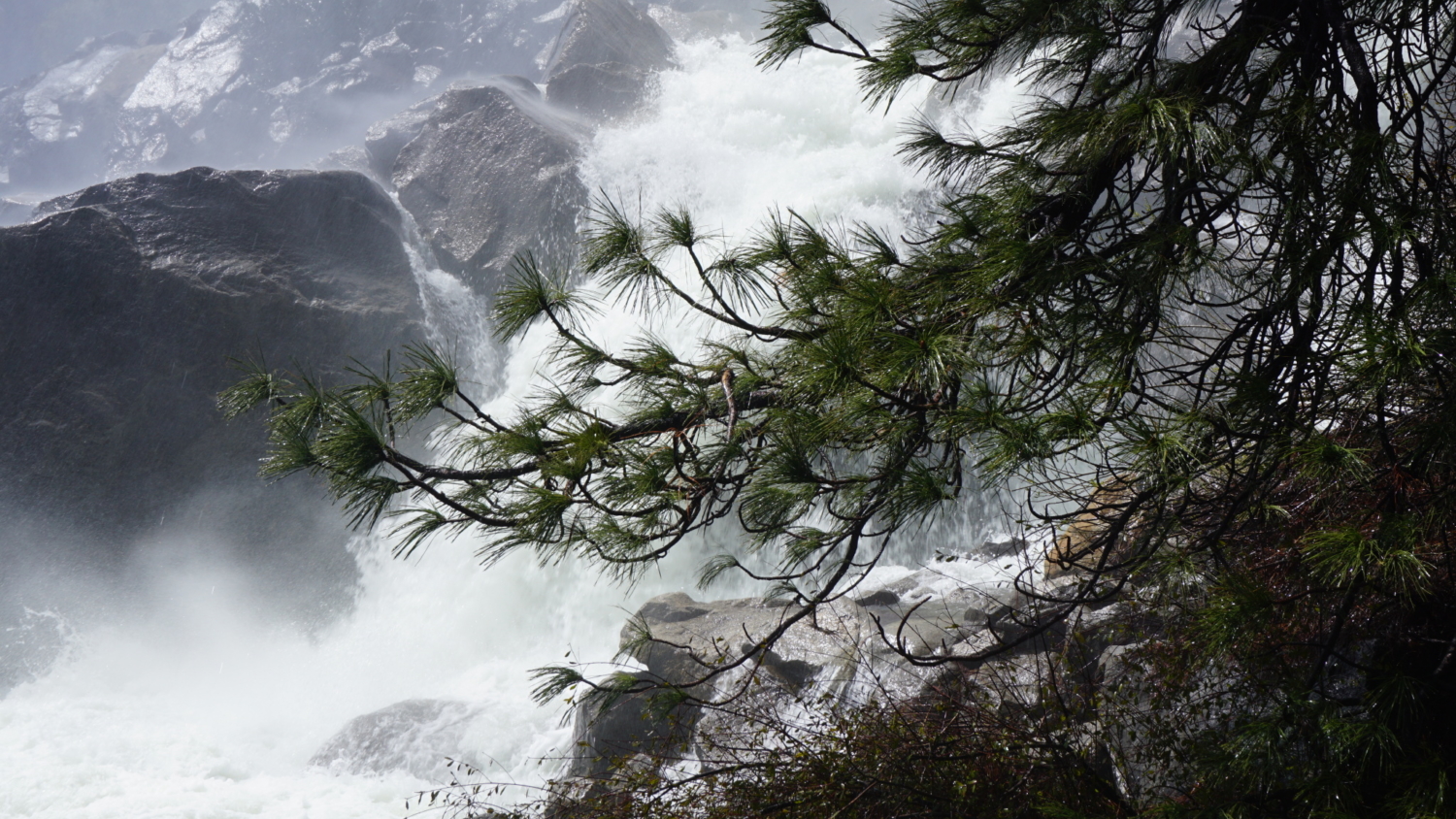 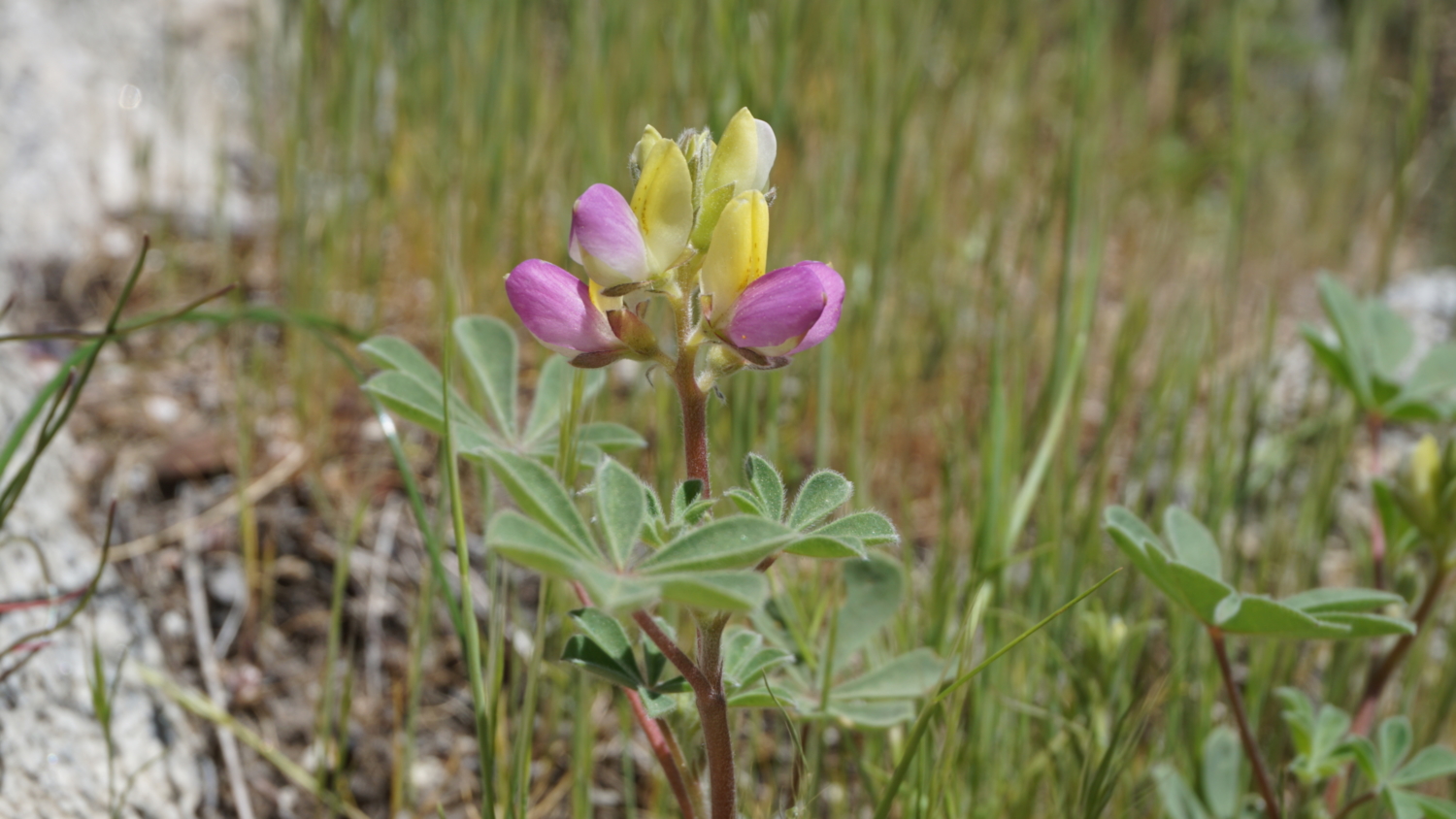 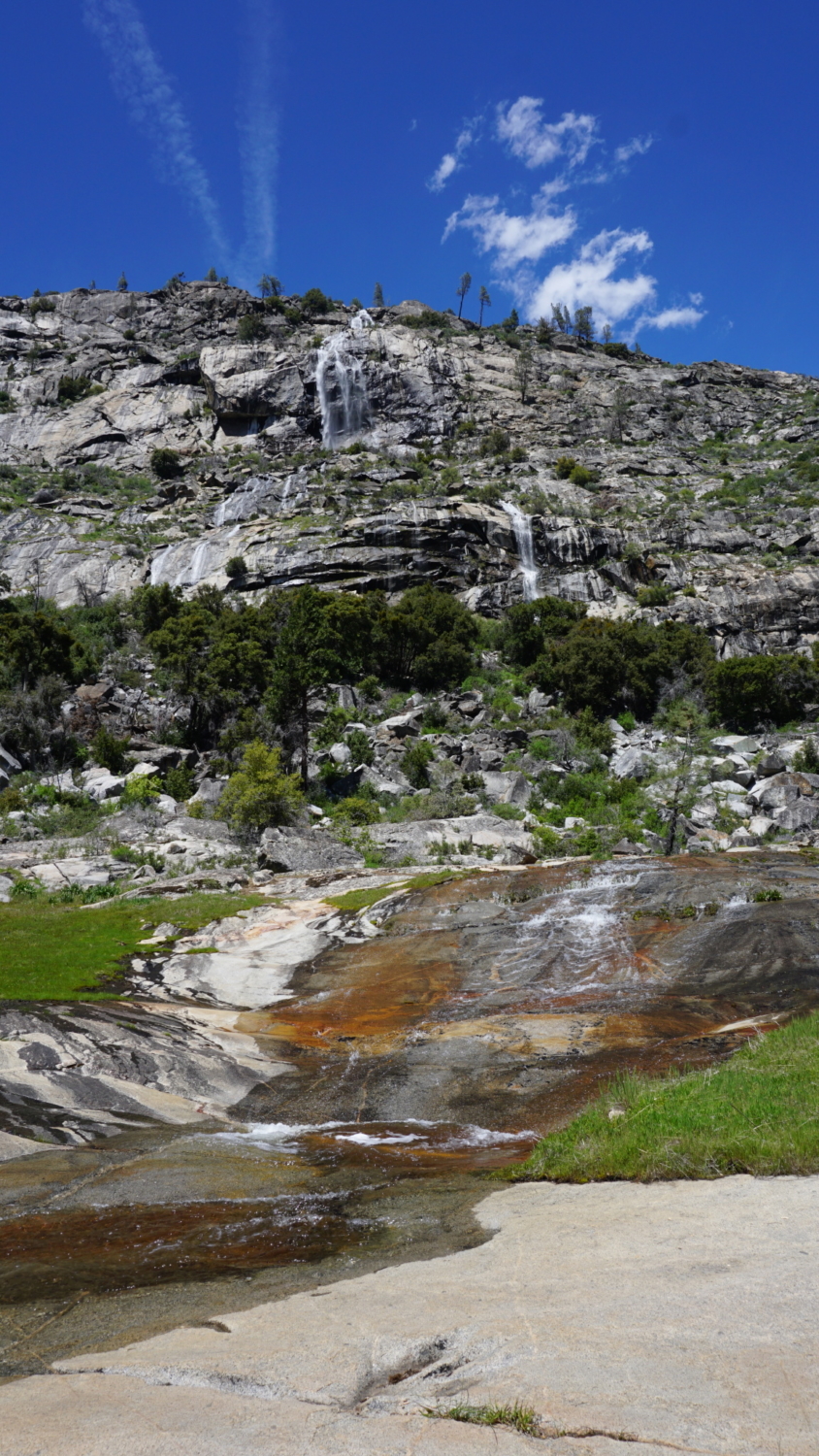 The trail is in good condition and easy to follow. During peak spring run-off, there may be additional creek crossings at Tueeulala Falls to contend with. The first bridge below Wapama Falls can also become impassable when the waterfall is raging.