The hike to Mount Islip is a predominantly shaded, gently graded 7 mile trail that offers unparalleled views of the Yerba Santa Amphitheatre, the high peaks of the central San Gabriels, as well as a well-maintained trail camp that’s a favorite of Boy Scouts and PCT thru-hikers. Ruins of an old fire lookout near the summit of Islip provide a bit of historic interest, while on clear days hikers will be able to see both the tallest point in the city of Los Angeles as well as the tallest point in Los Angeles County.

The trail to Mount Islip begins – easily enough – at Islip Saddle. Just past two tunnels, there is a moderately sized parking lot on the north side of the Angeles Crest Highway. It’s a popular parking area, especially for mountain bikers who ride down the closed CA-39, but it is also a stop on the Pacific Crest Trail / Silver Moccasin Trail, so it can see a lot of foot traffic from thru-hikers and Boy and Girl Scout groups alike.

The trailhead is on the south side of the Highway, and is marked by a lone stake in the ground emblazoned with the PCT emblem: 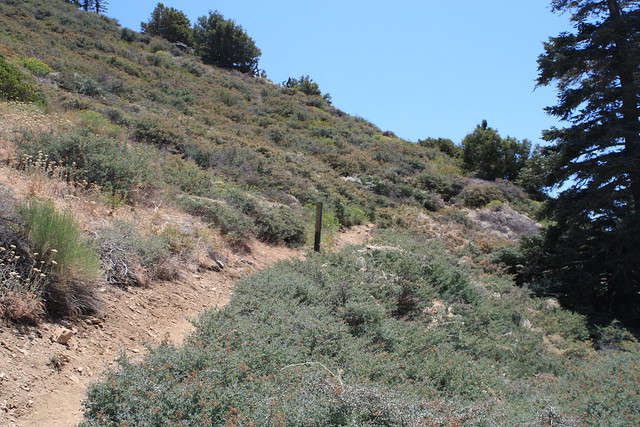 The trail makes a few quick switchbacks through some low rabbitbrush and manzanita before heading up to the cover of the pines. From here, you’ll have some interesting views of the Angeles Crest Highway and CA-39, but don’t worry about savoring them – you’ll have better views from the summit. 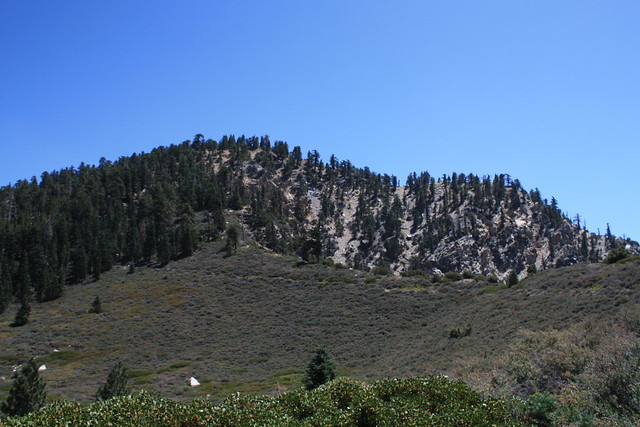 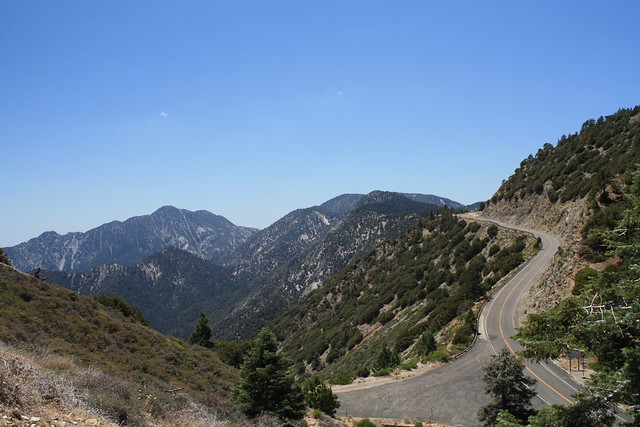 the shade can significantly cool the climb upward

The trail continues on the moderately shaded north face of Mount Islip for a mile, where it crosses a signed dirt road. This is the old route to Little Jimmy Camp, which begins a bit further east on the Angeles Crest Highway. Both paths still lead to Little Jimmy Camp, but stick to the trail for a slightly shorter distance and nicer track. From here, it’s another 1.1 miles of beautiful, relatively flat hiking to the campground. 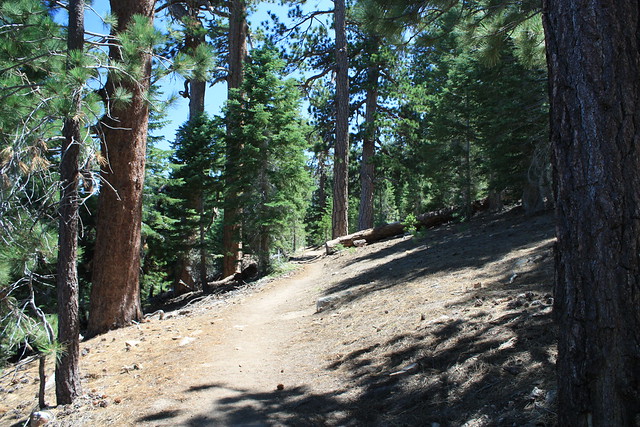 Like many areas in this section of the Angeles National Forest, parts of these slopes were damaged by the Curve Fire in 2002. While the north face of Islip remained relatively unscathed, there are still some areas of slowly-recovering forest you will hike through on this trail. 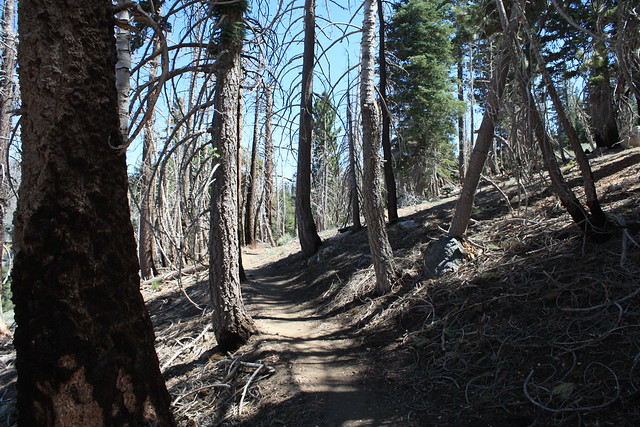 For the most part, though, the forest seems to have recovered nicely since that 2002 fire. You will note charred trunks and downed trees, but you’ll also notice a lot of those charred trunks have had plenty of time to start sprouting new branches above the trail.

Luckily, the well-stocked and maintained Little Jimmy Campground remains in excellent shape, with a vault outhouse, plenty of shade, lots of camp stoves and fire rings, and room for many tents. On the Saturday I hiked through, there were a handful of campers relaxing and trading bear stories. Because this trail camp is not too far from the road — and is on two popular long-distance trails — try to get here early if you’re attempting to snag a site for yourself … especially on sunny summer weekends. 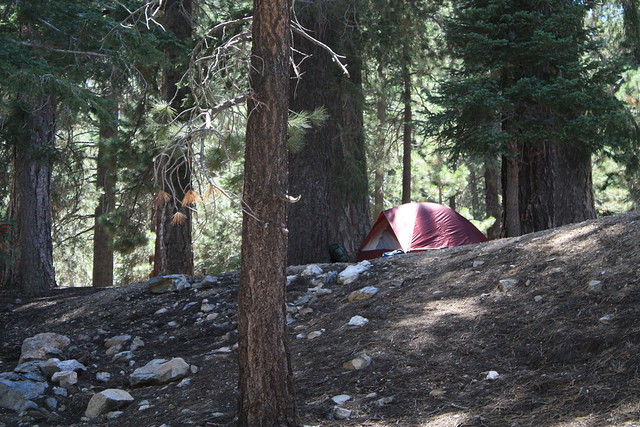 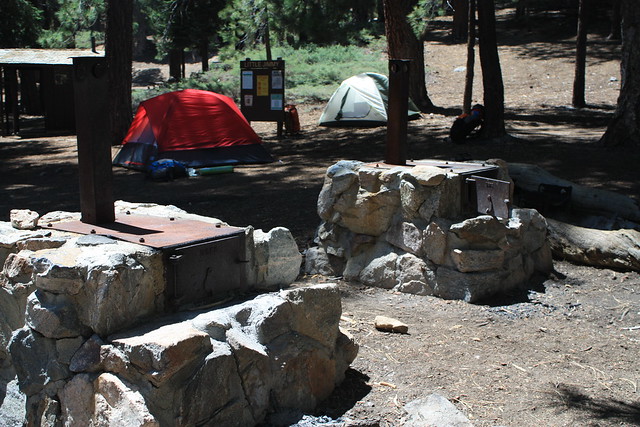 The camp owes its unusual name to artist and Hearst newspaper cartoonist Jimmy Swinnerton, who hiked all the way to this spot from Coldbrook Camp (near the trailhead for Smith Mountain in the summer of 1909. He enjoyed this cozy camp so much that he stayed here the entire summer, drawing cartoons of his character Little Jimmy and even painting a life-sized, color version on a tree trunk near the entrance to the campground. For a time, the camp became known as Camp Swinnerton, but it wasn’t long before both the camp and a nearby spring were renamed Little Jimmy for the character.

At the camp, the trail you’ve been walking on looks like it continues to the southeast, but this is actually a spur trail to Little Jimmy Spring. Instead, hike west through the camp site, past the outhouse and camp stoves, and you’ll see a signed and rock-marked trail that climbs the low ridge to the west of the main camp. 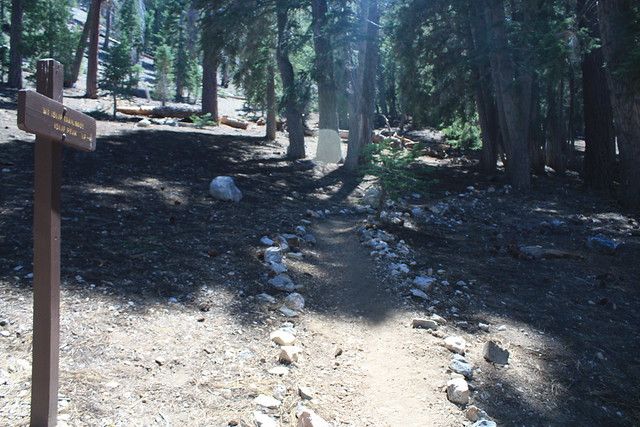 From here, the trail continues, passing by a few choice north-facing camp sites with outstanding views of the mountains and desert, then turns back east and makes a slow climb. There’s a bit more fire damage here, which makes it all the more remarkable that Little Jimmy is in such good condition. 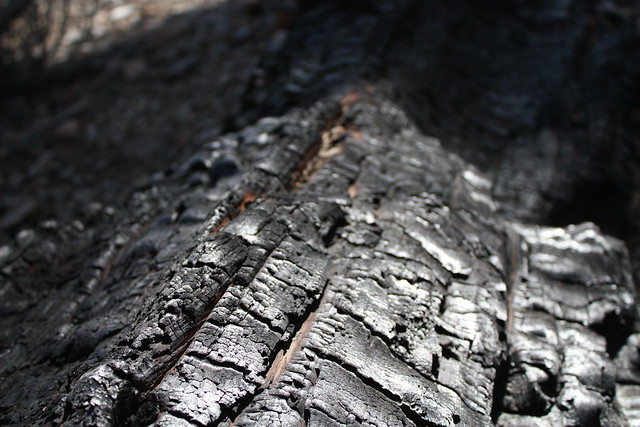 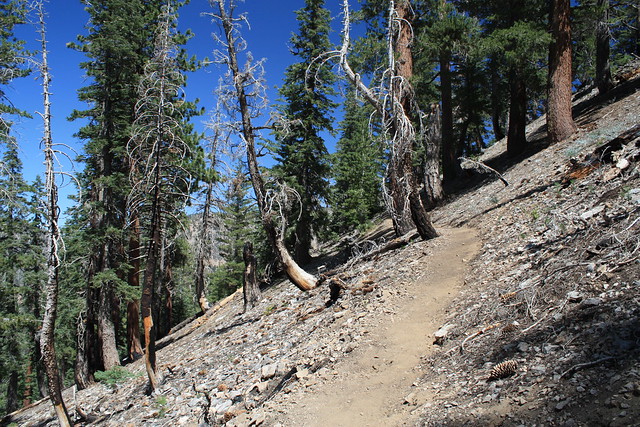 At about the 2.6 mile mark, the trail forks. Stay to the right to continue 1.2 miles to the summit of Mount Islip. The trail to the left heads east to Windy Gap, the Hawkins Ridge, and Mounts Throop and Baden-Powell (take note if you’re backpacking!). 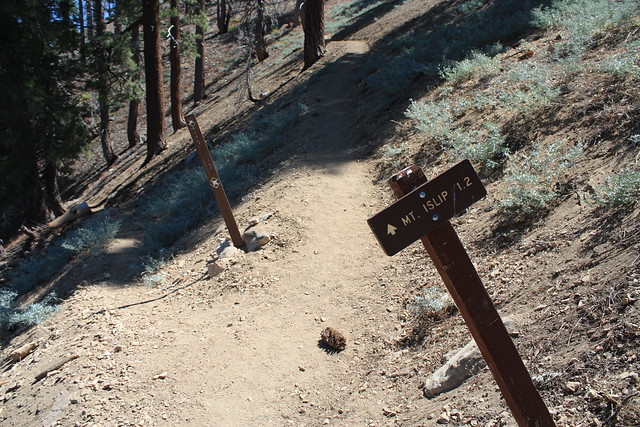 Less than a tenth of a mile from this junction, the trail makes a sharp westward turn along a ridge, and you’ll get your first view of the Yerba Santa Amphitheater — I guarantee you you’ll be impressed, even though much of the vegetation has been lost to fire and bark beetle infestations. 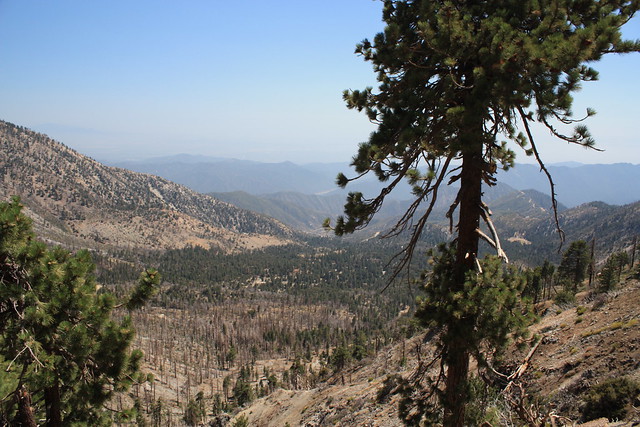 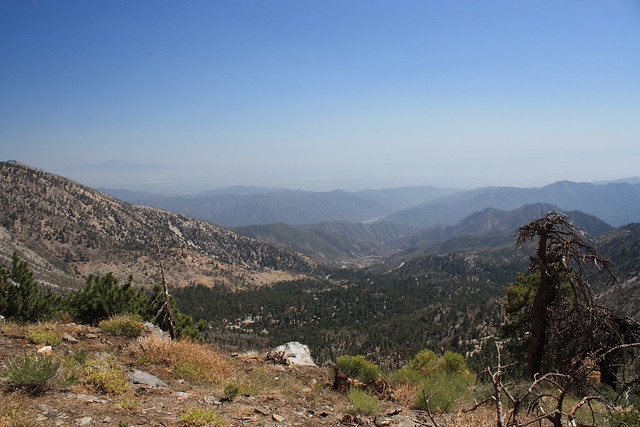 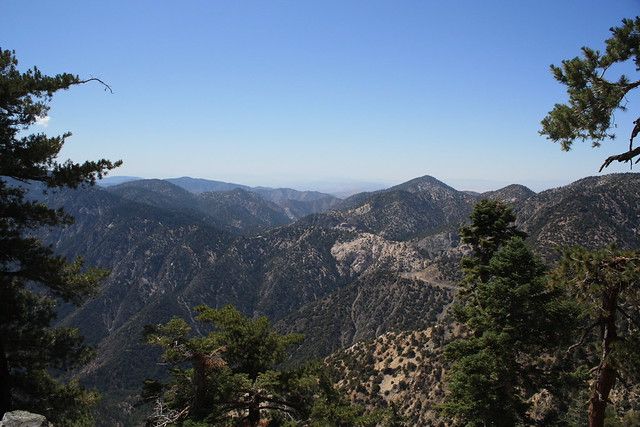 From here, hike the last 0.9 mile along the ridge, passing a junction with the Big Cienega Trail, which heads down toward Crystal Lake. 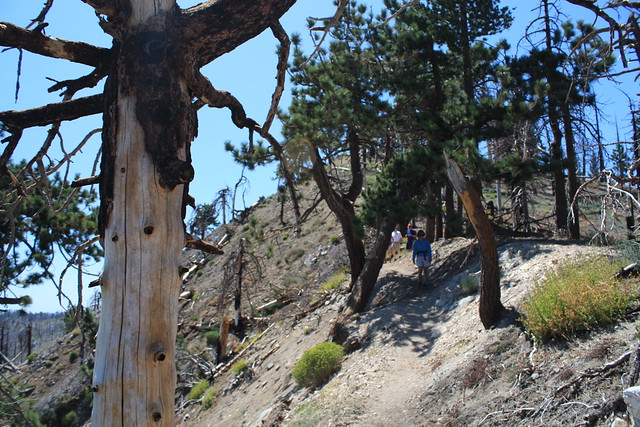 The trail skirts around the southern edge of the summit, then wraps around the north side, where the remains of an old stone cabin and the foundations of a fire lookout still stand. The summit (and a few concrete foundations) are just beyond this structure, and make for a great place to rest for a few minutes with a snack or book.

The cabin is the remnants of a former fire lookout that stood on this peak – one of many that dotted the peaks in the San Gabriels before an increase in smog rendered them inefficient. One of the very first two-way radios utilized by the National Forest Service was used at this spot, if you’re into extremely specific historical items. If not, just enjoy the views and head back the way you came. 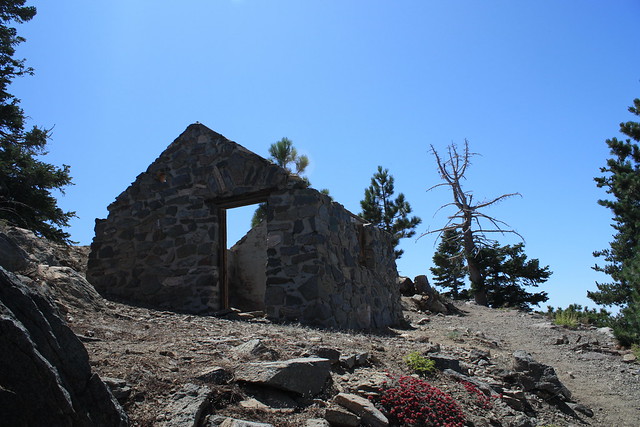 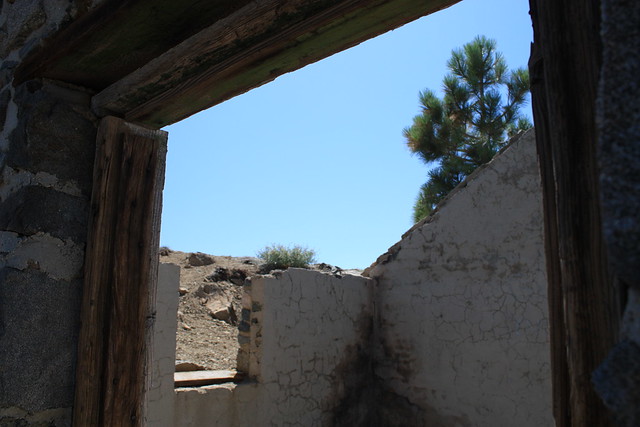 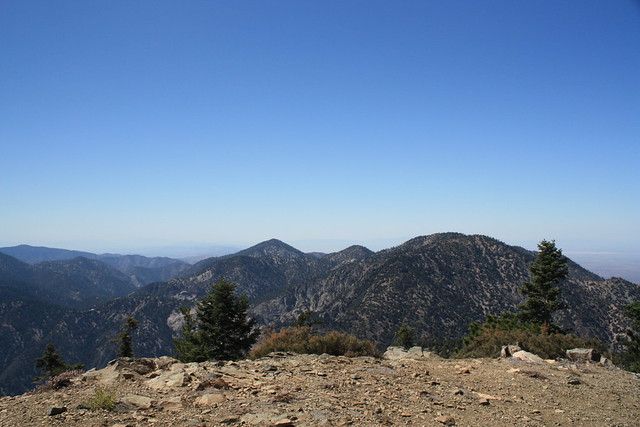 The Yerba Buena Amphitheatre in 2017 – with a bit more green!

Looking west, you can see Twin Peaks and Waterman Mountain in the foreground. The radio towers on Mount Wilson are also visible. The jagged peak in the distant center is Strawberry Peak, neighbored by Josephine Peak. Mount Lukens is a bit beyond them — it was visible by eye, but the photo captured a bit too much of the haze to show up here.

Meanwhile, to the east, Mount Hawkins and the Hawkins Ridge stand right before a distant Mount Baldy.

Excellent. The vast majority of the trail is very clearly marked and signed at junctions. The only time when it's easy to lose the trail is when it meanders into Little Jimmy Camp, but if you just keep your eye out for the trail, you'll be able to pick it up again pretty easily.

From the 210 in La Canada Flintridge, take the Angeles Crest Highway 39.6 miles to Islip Saddle (just past the locked junction with CA-39). There is a moderately sized lot on the north side of the Highway, and the trailhead is just across the entrance, on the southern side. Be sure to display your Adventure Pass.

Just did this hike today with my wife. What a beautiful trail. Was very impressed with Little Jimmy Campground.i always wondered where highway 39 continued to from Azusa and now I know.

Thanks for pointing it out. That's a whiff on my part -- and an older post that needed a bit of updating regardless ;)

Thanks for being inclusive, I really appreciate it!

Historically it's been a big Boy Scout camp but it's definitely opened up since those black and white photos. I'll tweak the copy :)

Would you please update your description of Little Jimmy Trail Camp to include that Girl Scouts camp here too? Many Girl Scout troops camp here in addition to Boy Scouts, and I would appreciate if you would add this. :) Thanks for your wonderful site- I really love it and have used your trail guides to take Girl Scout Troop 4673 on many adventures. Outdoor leadership experiences are for everyone!

I did this one on 4/22/17. No significant snow up to Little Jimmy Campground. There are some patches near the campground but it was quickly melting. The trail up to Mt Islip had maybe 2-3 larger patches of snow but you could get around them easily.

How was the part to little jimmy camp ground? Any snow to that point or at the campground? thanks

Me and the my dog did it today, great hike. There were some pretty snowy sections though. Wish i had brought my poles, maybe crampons too. The rangers where at the parking log giving tickets to everyone with out at with out an Adventure Pass.

Sounds like you had a killer time! I'm glad we could help convince some of your friends to join you on the trip :)

We hiked this trail just before the new year. It was epic! It snowed, so some sections were super sketchy. The snow turned ice nearing the summit. Slipped twice in a section with a near-vertical drop. A few switch backs near Little Jimmy Springs were the most challenging, we were pretty much skating half the time. Added to that, we were one of the first hikers that day so no tracks to follow. We had to bust out map and compass as the trails disappeared. Our hike took pretty much the whole day, we stopped almost every turn in awe of the beauty around. It took this site to convince me to gather some folks and enjoy this marvelous beauty. Thank you, Casey. Keep up the good work, my dude. Will recommend this site to friends.