One Man’s Trash is Another Man’s Regional Park

One of the most exciting new parks in Southern California is a dump. Literally.

Well, it used to be a dump.

First opened in 1957, the Puente Hills Landfill eventually had the dubious distinction of being America’s largest and deepest landfill before closing its doors in 2013. The facilities slowly became greener after an agreement in 1987 that directed the landfill to begin preserving landfill space as open space – a generator harnessed electricity from the natural gas emanating from the decomposition underground, and the former garbage mountain was terraced and sections were filled with native plants to restore habitat and provide erosion control.

There is a long-term, 30+ year plan to turn this landfill into a landmark County Regional Park, providing much needed outdoor and community space for the San Gabriel Valley, and connectivity to the nearby Puente Hills region. After several years of topping the landfill with dirt and clay to prevent rainwater infiltration, the landfill is now fast-approaching the first phase of its new life as a bona-fide park.

About 40 acres of the western section of the landfill is anticipated to be stable enough for development sometime between 2017 and 2019, while the eastern 49 acres and southern 28 acres should be ready around 2038-48. When it’s all done, we’ll have more than 140 acres of new parkland. 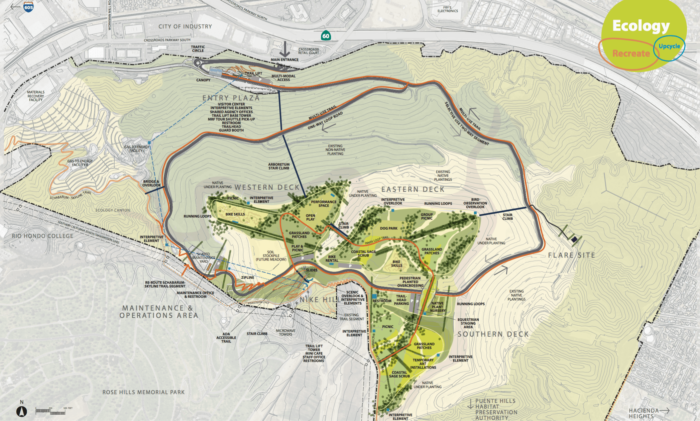 overview of the park and its three decks. Click to enlarge.

Los Angeles County, the Department of Parks and Recreation, and the landscape architecture firm Withers & Sandgren have been holding informational meetings over the past year, and now Modern Hiker has received some of the presentation and internal documents showing just how drastic a change this new park will be.

The proposed park has many objectives and missions, but the key opportunities are Views, Trail Connections, Habitat Enhancement, and Interpretation.

It’s a somewhat local secret that some of the best views in all of Southern California can be found in the Puente-Chino Hills. Especially during winter and spring days, when our native plants are green and the skies are clear, trails in this region offer up spectacular views of the San Gabriel, San Bernardino, San Jacinto, and Santa Ana Mountains — as well as even Griffith Park, parts of the Verdugos and Santa Monicas, and the downtowns of Long Beach and Los Angeles.

Thankfully, many of the park plan’s renderings focus on open scenic overlooks that will let the views envelop the viewers, all while providing information on the unique landscape of the San Gabriel Valley. 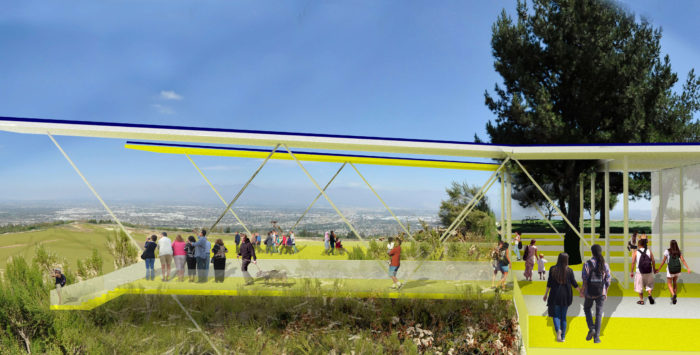 overlook concept for Nike Hill, the highest point in the park

The new park’s trail system has a little something for everybody – there are hiking trails, there are staircases for fitness and open loops for runners, there are equestrian routes, and there are biking trails and even a mountain biking skills park. Additionally, multi-use trails ring the park and the long-distance Schabarum – Skyline Trail runs directly through the park and connects all the way through Rowland Heights. 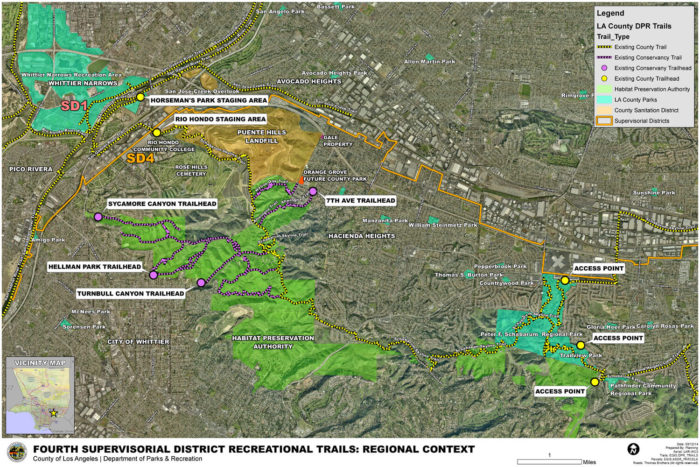 As we’ve seen in some of the renderings already, there are also a wide variety of trail uses, from hiking to running to mountain biking to horseback riding. The overview map also includes things like a dog park, a native plant nursery, art installations, picnic and group picnic areas, and a performance space, too.

It does seem like the plans for this park are truly a multi-use focus, which is an excellent direction and badly needed in this region. I’ve often thought of the Puente Hills trails as that region’s version of Griffith Park – and the addition of these additional outdoor recreation resources absolutely cements that.

One of the most popular plans at the informational meetings was habitat restoration and enhancement. The Puente Hills serves as an important biological corridor for many forms of wildlife, and although large swaths of the region are managed as parks, obviously having a huge landfill sitting between the Puente Hills and the Whittier Narrows was something of an … impediment.

With the removal of that landfill and the reintroduction of native plants, park planners are hoping to strengthen the biological corridor that stretches down into the Santa Ana Mountains. The Los Angeles County Department of Regional Planning has already been marked a “Significant Ecological Area” and studies have tracked carnivores from the Santa Ana Mountains down to the San Gabriel River, at the western edge of the Puente Hills. The San Gabriel River could provide an additional corridor into the San Gabriel Mountains, which would help animals meet new mates and protect against genetic degradation (a recent study found that the mountain lions in the Santa Monica Mountains could go extinct within 50 years if more wildlife corridors aren’t established to connect that range to other parts of Southern California)

Stay informed on the Puente Hills Landfill Park and dig down into lots more info at their website, puentehillslandfillpark.org.

A Hike and Bike event will be held at the park on Sunday, September 25. Registration is free and can be done via their Facebook Event Page or via Google Forms.

And now, some more before-and-after shots. 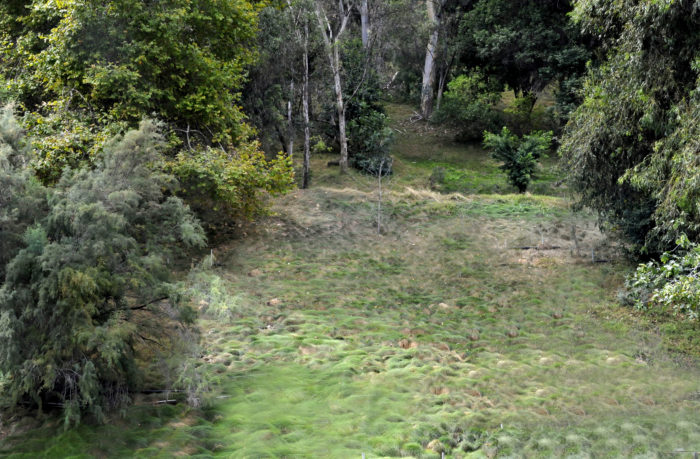 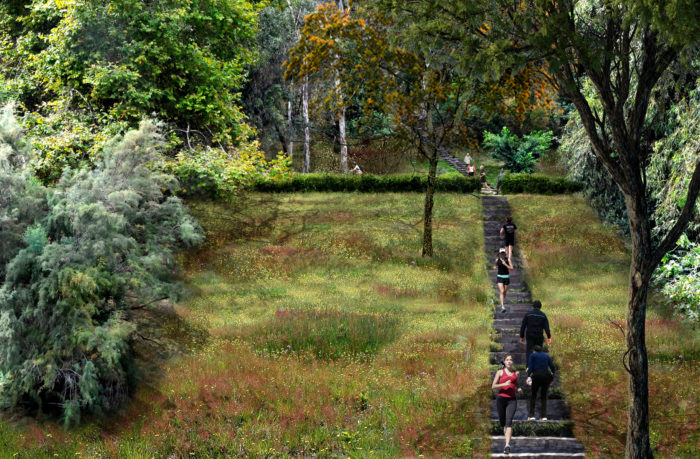