A short but rugged trip up to the top of Mount Lawlor, one of the lesser-known summits in the San Gabriels. Easily accessible, but still moderately challenging, with some light rock-scrambling and a use-trail descent if you’re feeling adventurous.

NOTE: THIS TRAIL WAS DAMAGED IN THE STATION FIRE. The area has been re-opened to hikers but there may be considerable damage to the trail and it may significantly differ from this description. Please contact a ranger station for the most up to date trail conditions.

I kind of get the impression Mount Lawlor gets the short end of the ‘Featured Peaks’ stick. It’s not included in either of the printed guide books I use for the San Gabriels, not featured on many other web sites … nothin. To its south, the big draw is the car-accessible and ‘big name’ of Mount Wilson (that’s where the news has their dopplers!). To the east, the allure of the old Nike missile site at Barley Flats. And just to the west, the imposing and challenging rock climbing face of Strawberry Peak. But Lawlor is definitely worth doing – on its own or as part of a larger trip.

We parked at Red Box, suited up and crossed the street to the trailhead. This trail began paralleling the Angeles Crest Highway, and with the car noise and frequent power / telephone line crossings it’s a bit tough to feel like you’re away from the rest of civilization. But the trail moved quickly, and soon we were emerging from some ‘brush tunnels’ to our first views of Mount Lawlor – a slightly-unremarkable mound peeking out from the greenery: There’s a saddle right at the base of the southern face of the mountain at the 1 mile mark, and you can make out a straightforward – and relentlessly vertical – use-trail following the route of an old telegraph wire. It also looked well-populated with Spanish Bayonets so I suggested we continue on the proper trail to the west side of the mountain.

The trail had plenty of tire tracks on it – moreso than footprints, it seemed. And sure enough, the only people we saw on the way were two mountain bikers on their way up and one biker on his way down. We made sure to give them plenty of room and continued on the gently-graded trail as it zig-zagged across Lawlor’s south face and snaked around the west side.

Soon, we got our first view of Lawlor’s western neighbor, Strawberry Peak. Although the angles don’t look like much here, there are long sections of the hike up that particular peak that are passable only by doing some serious rock scrambling. We’re talking nearly vertical, too. Almost rock climbing, with parts over sheer cliffs. It’s definitely an exciting adventure hike, if you’re mentally and physically prepared for it. Our hike, so far, was not nearly as adventurous. Although we did get to see snow on some of the shaded sections of the trail, which is always a treat in Southern California. When we got to the saddle between Strawberry and Mount Lawlor, I was expecting to see a clearly marked trail toward Lawlor’s summit.

There was a sign, with an arrow pointing toward Lawlor … but the direction it was pointing in was straight down a drop-off. Pretty quickly, we found a single set of footprints in the snow that just started climbing up the thin mountain ridge. We followed.

This is the route up to Lawlor. It’s steep, it’s rocky, it meanders and winds through areas of rock, brush, and Spanish bayonet, and it’s a hell of a lot of fun. And with the winds howling around us near cliff’s edge, it had just the right amount of sensible danger to it. I could have run up these rocks scrambling my heart out, but decided to be a Good Hiking Host and wait up for my companions. It’s the Right Thing To Do.

A little huffing and puffing, and we made it to the summit of Mount Lawlor in just about three miles. Not too bad, although the rush to the summit is significantly more steep than any part of the trail leading up to that point.

Despite the thick L.A. Basin haze, we still got some nice views of the surrounding peaks. To the south, the forest and brush of San Gabriel Peak and Mount Disappointment, and the radio-transmitting forest atop Mount Wilson. And to the east, the peaks rolled out before us, the water tower and long plateau of Barley Flats in our immediate foreground. After chilling out at the summit and signing the register (very few signatures!), we decided to keep the adventure level high and take the south face use-trail down.

And down it went. Almost straight down, actually. And it was absolutely lined with Spanish bayonets on all sides and angles. While the ground was loose and unstable, and the bayonets were sharp and plentiful, this was an incredibly fun way to get down the mountain.

An almost straight-down path, there were plenty of places where ‘dirt skiing’ was a better mode of transportation than walking or hiking. And we took it.

Joshua in particular took well to the descent. He launched ahead of us, sliding down the mountain. He only fell twice, and kept good spirits – which is important when you’re surrounded by leaves as sharp as needles and covered in dirt and dust. I took a slower route, but did my share of sliding as well. Kevin followed close behind, and when we got back to the saddle, we were able to look back up at the peak with that greatest joy of hiking – the true sense of accomplishment. I really don’t know why more people don’t do this mountain. 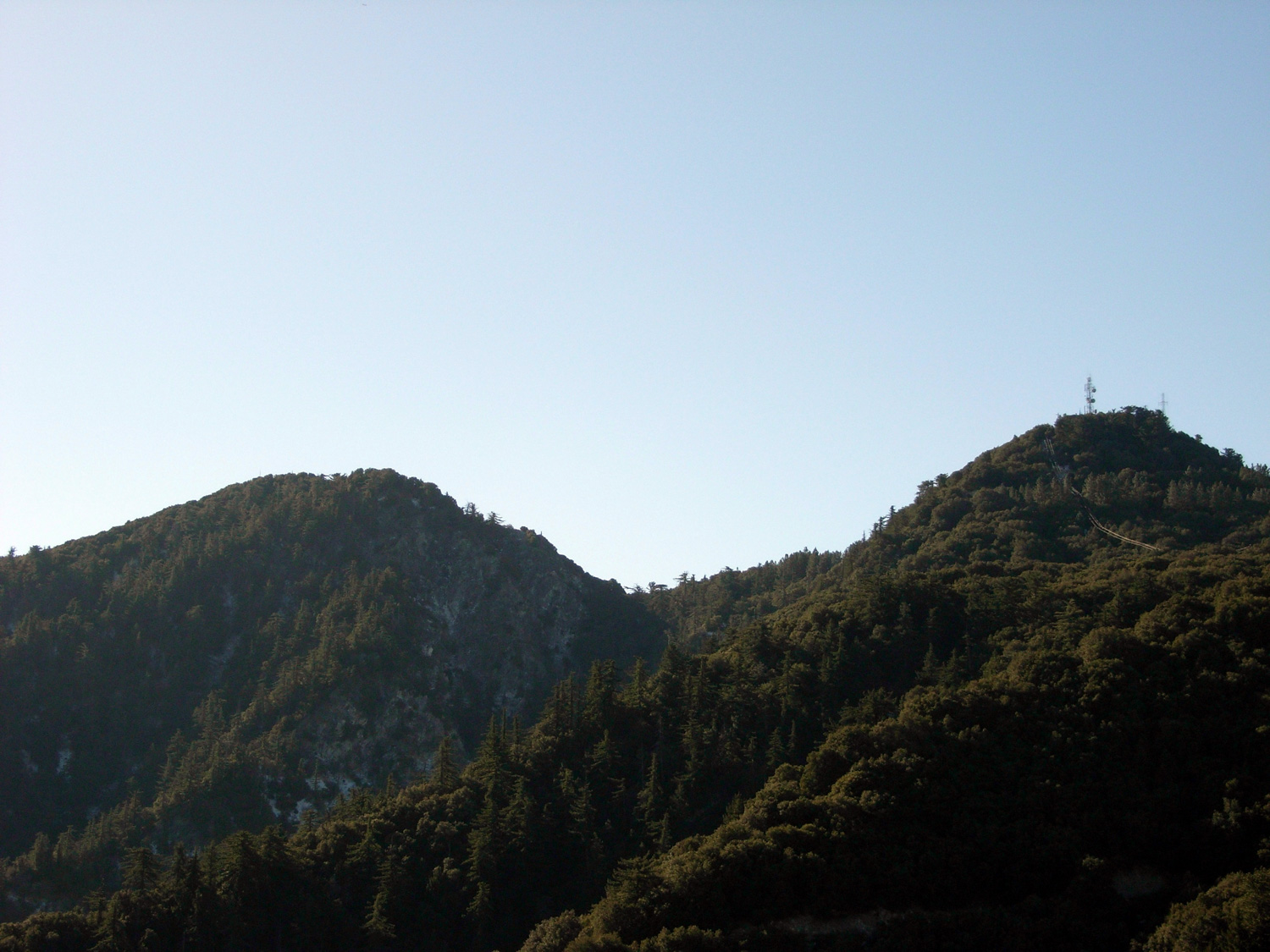 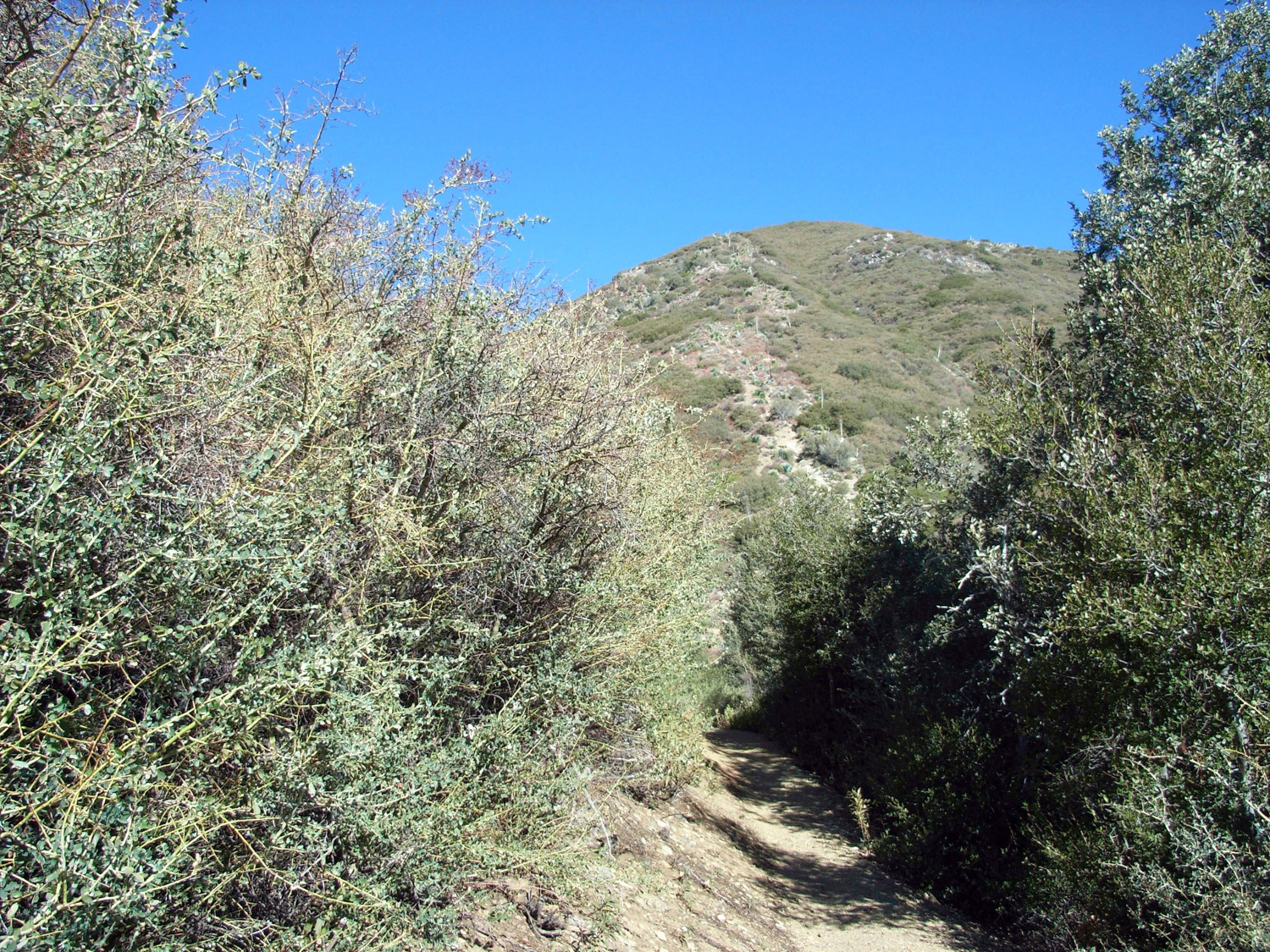 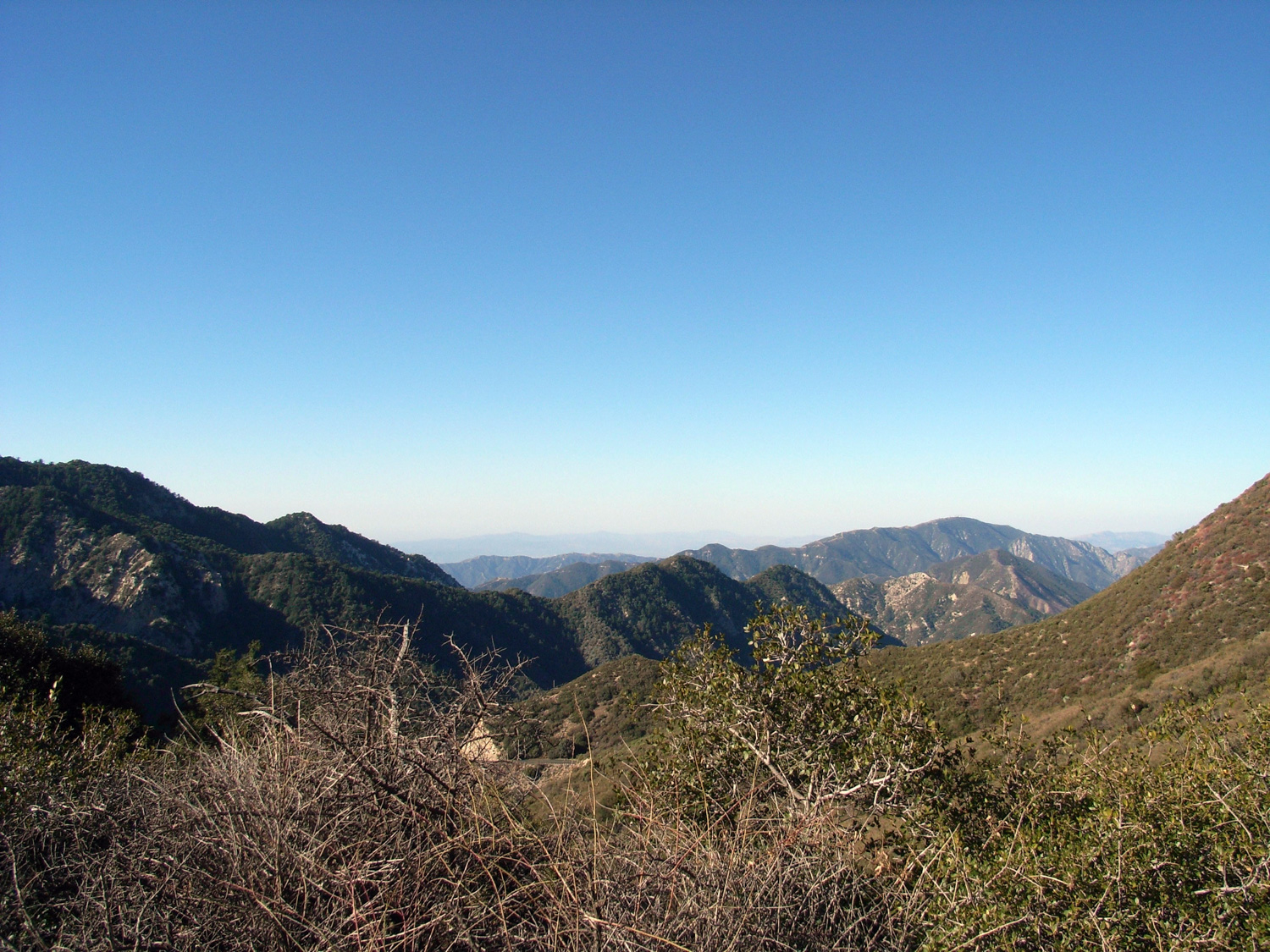 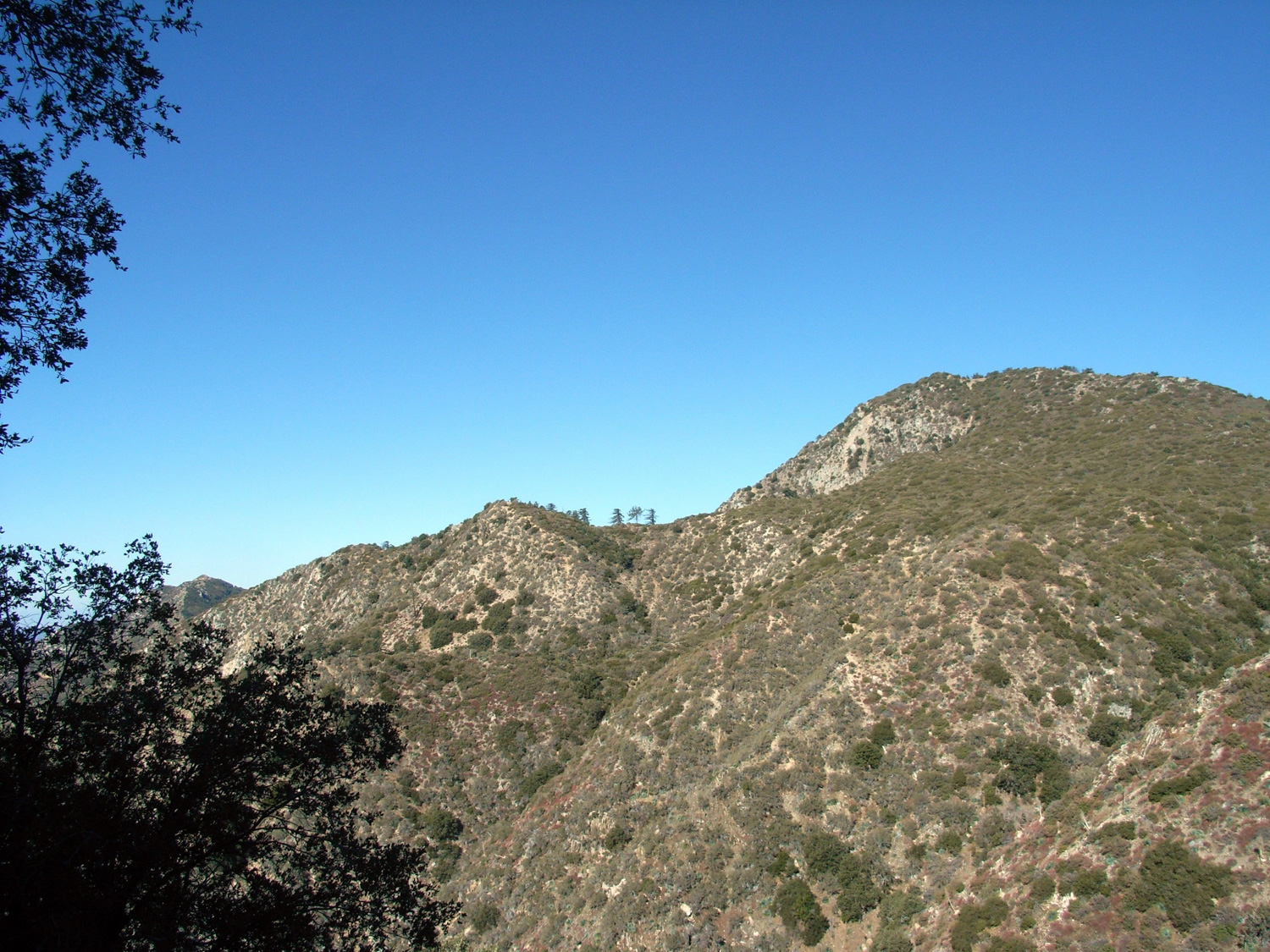 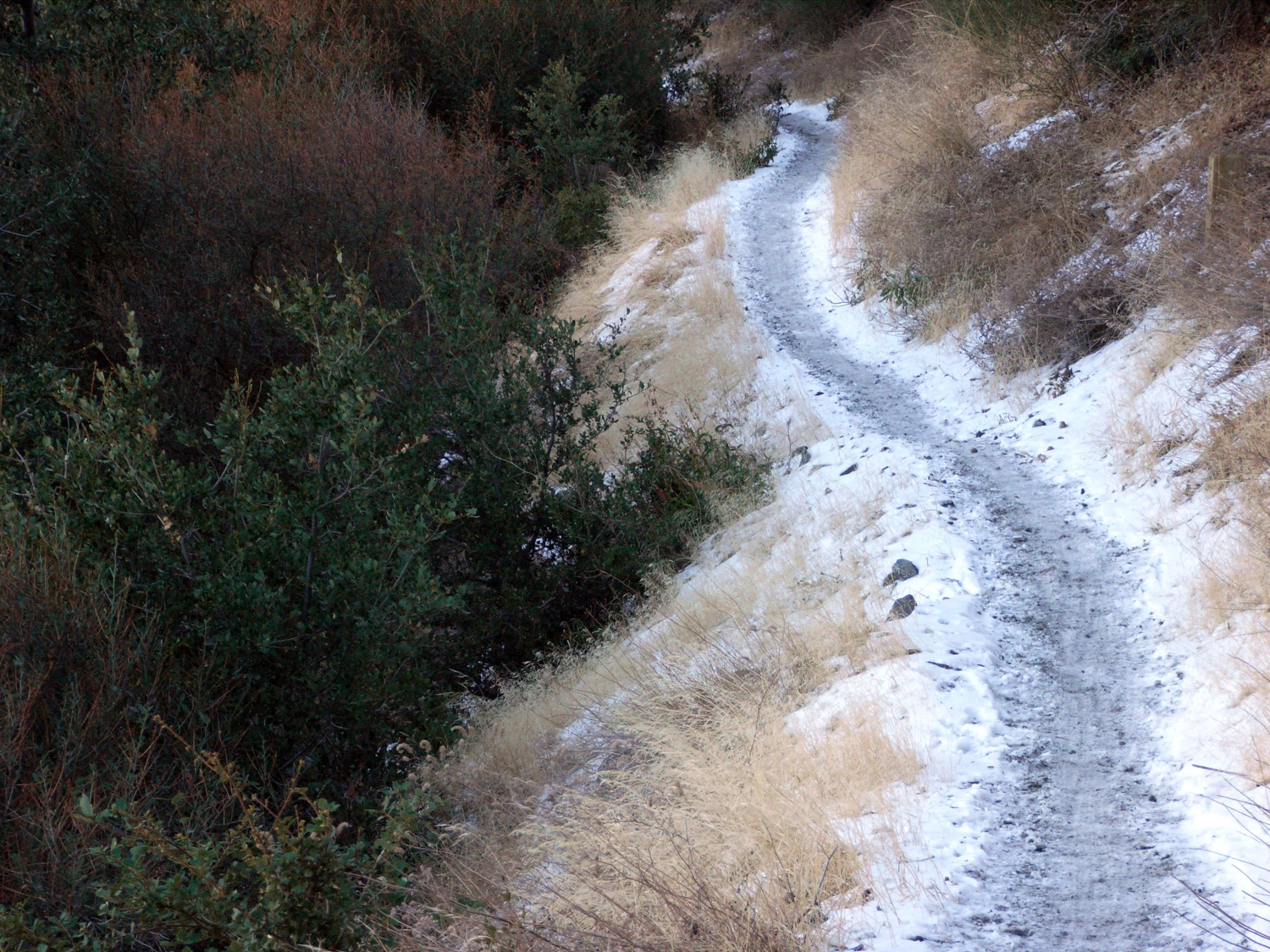 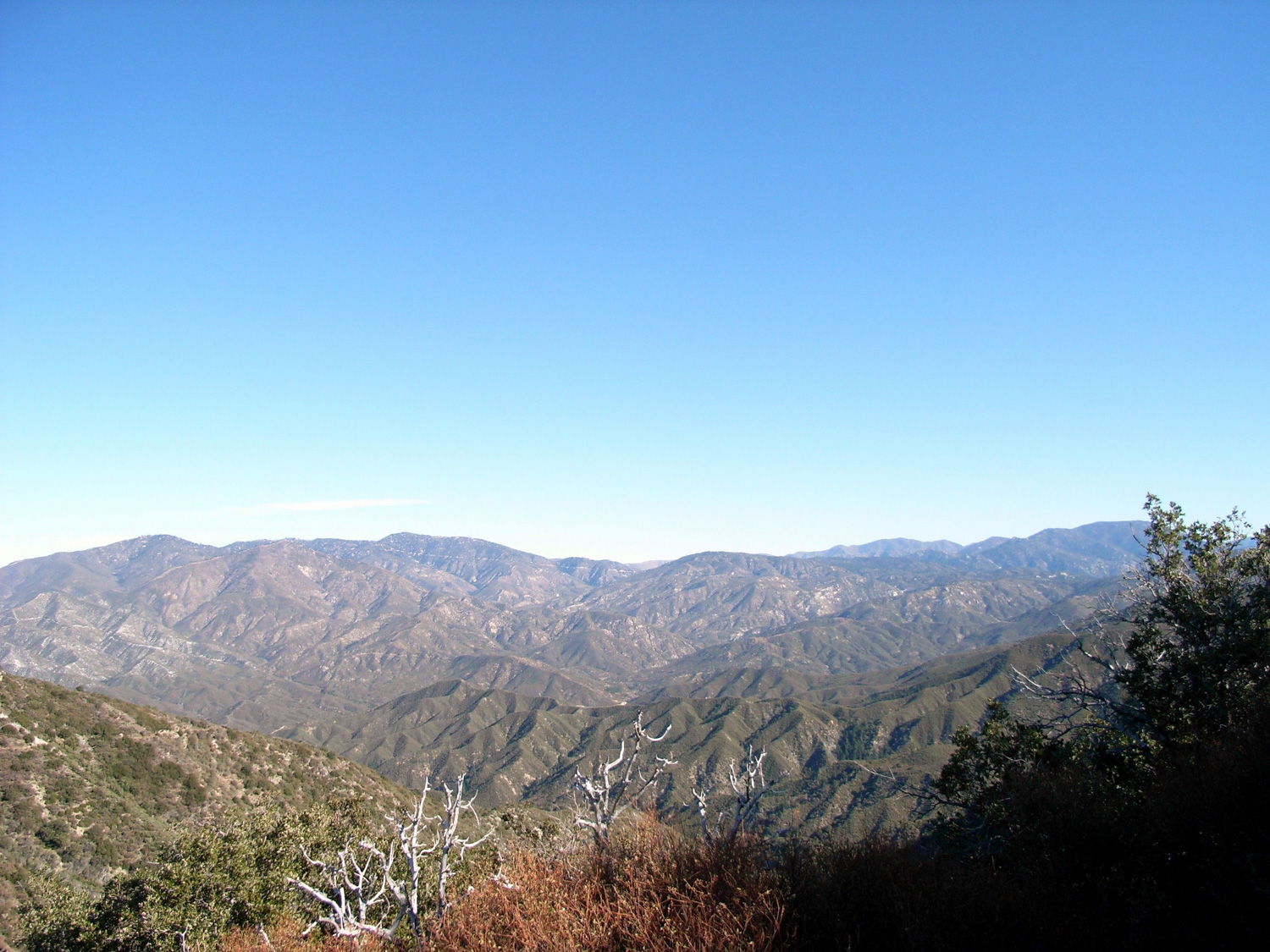 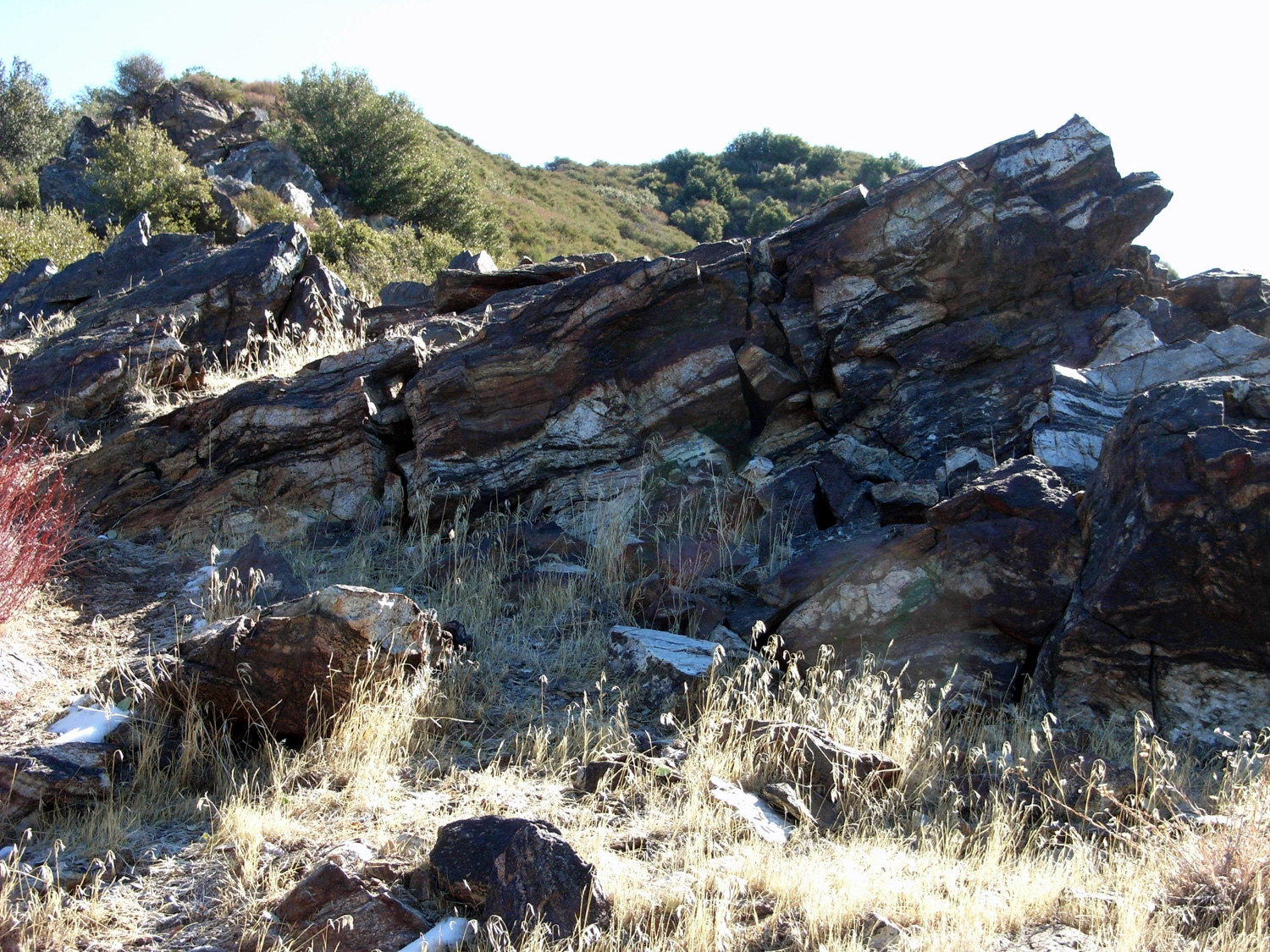 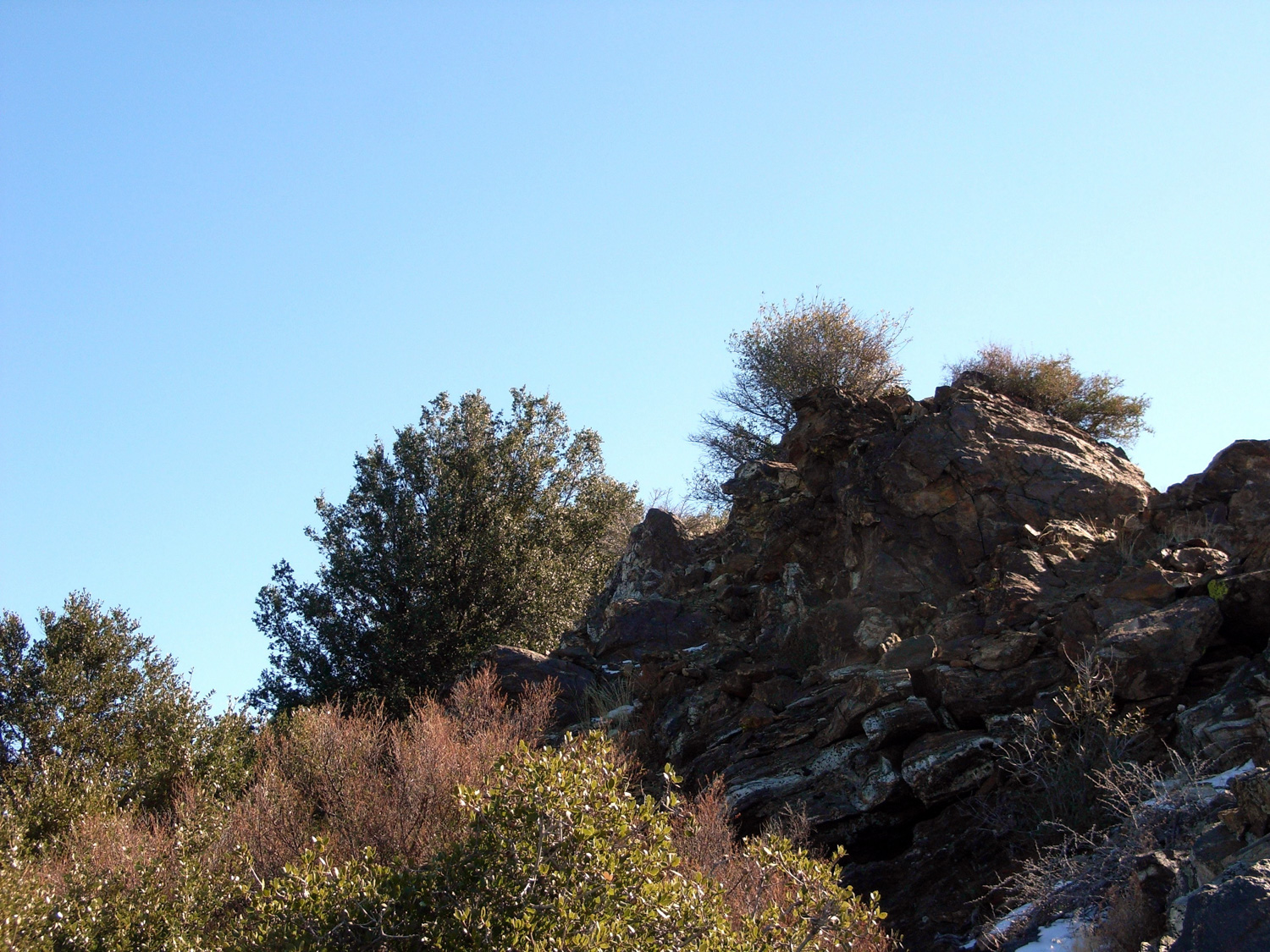 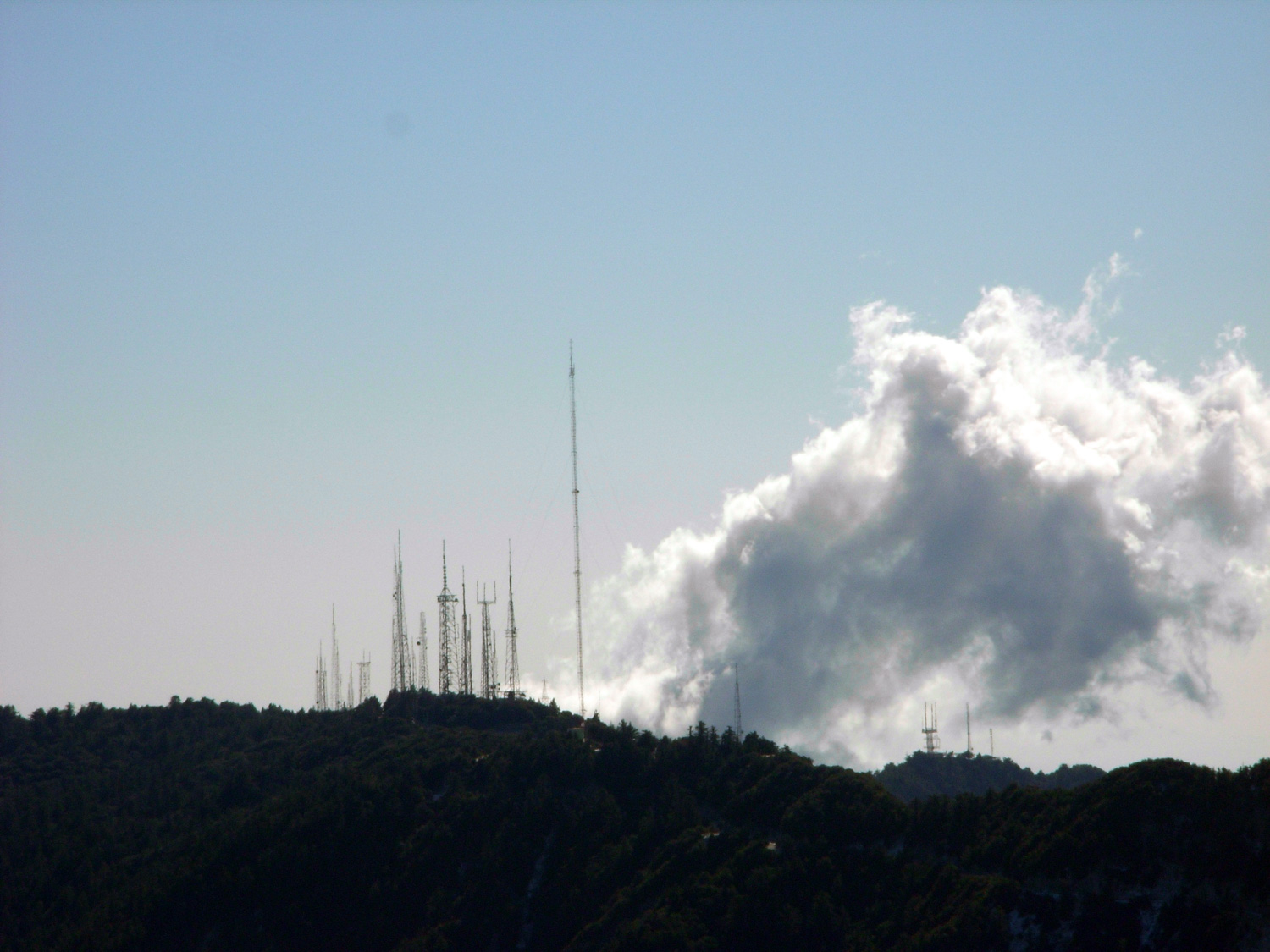 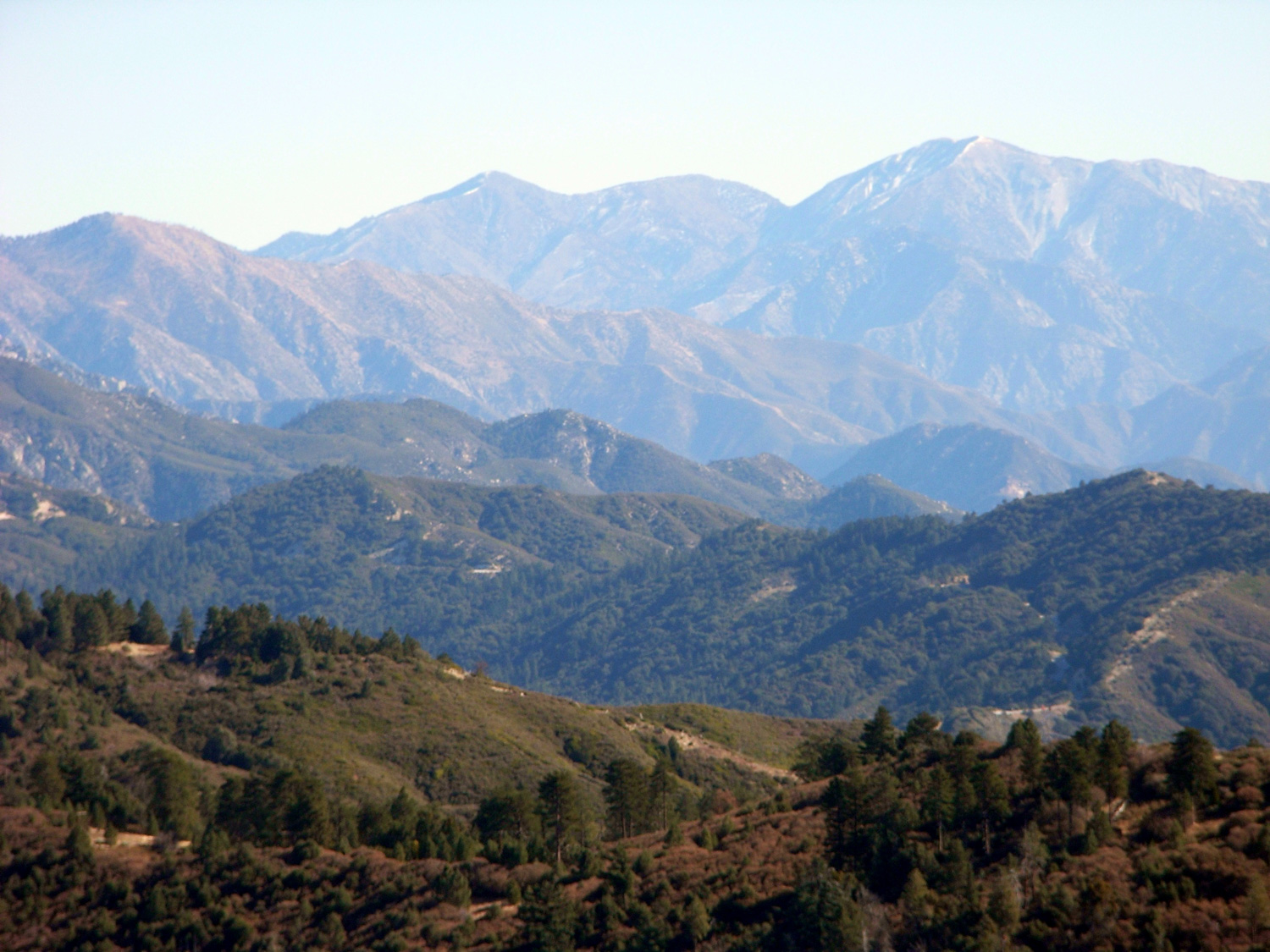 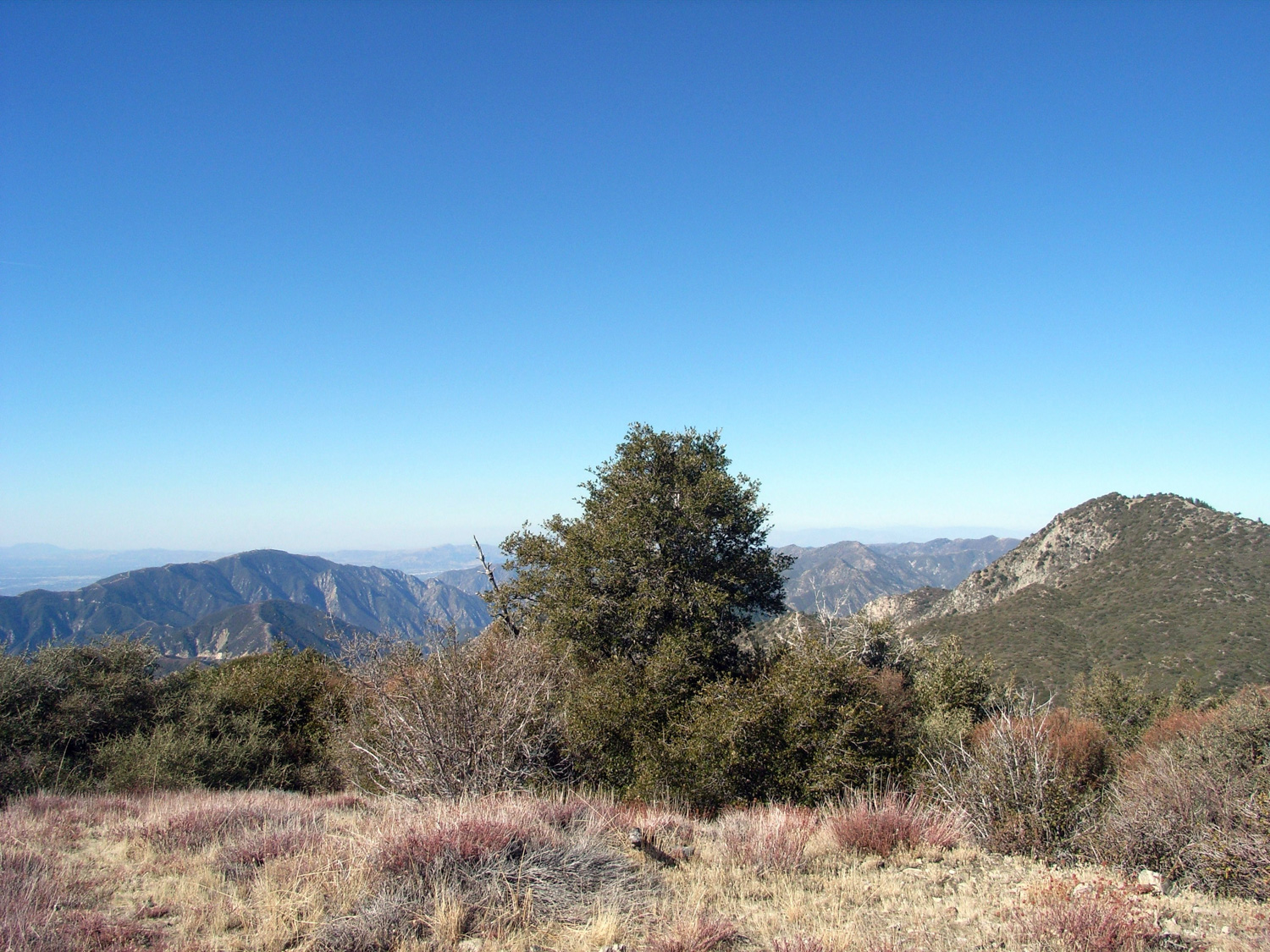 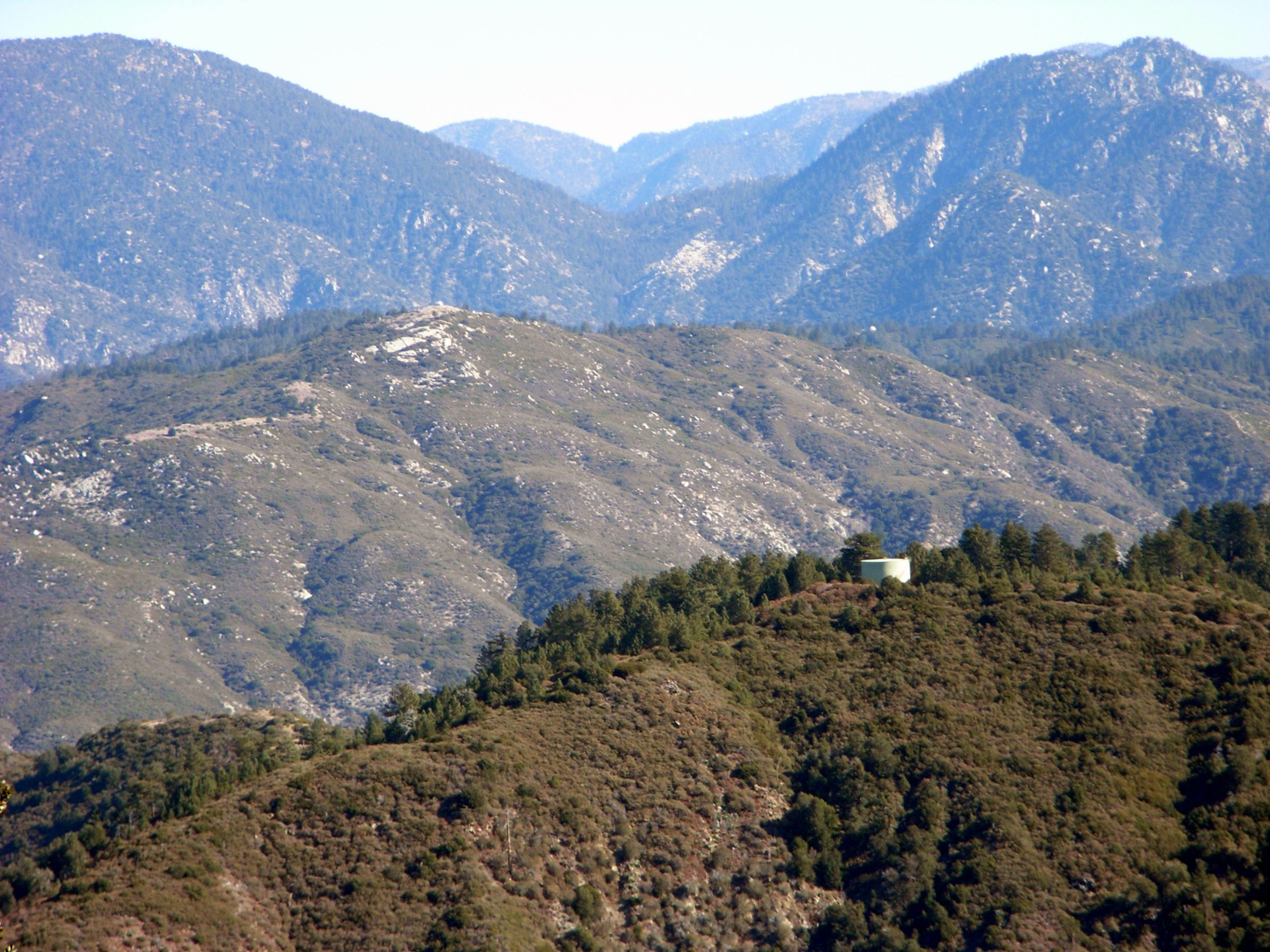 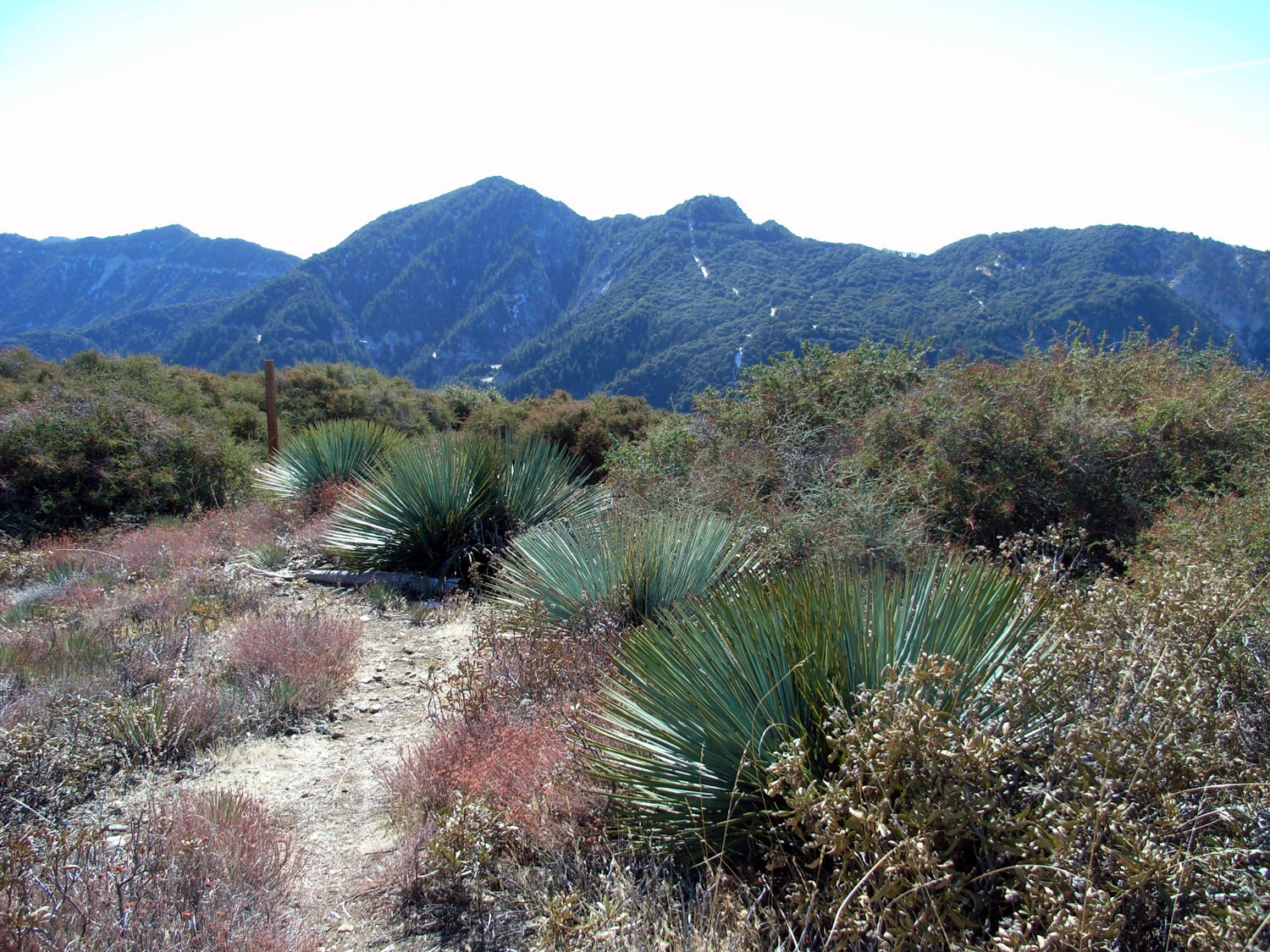 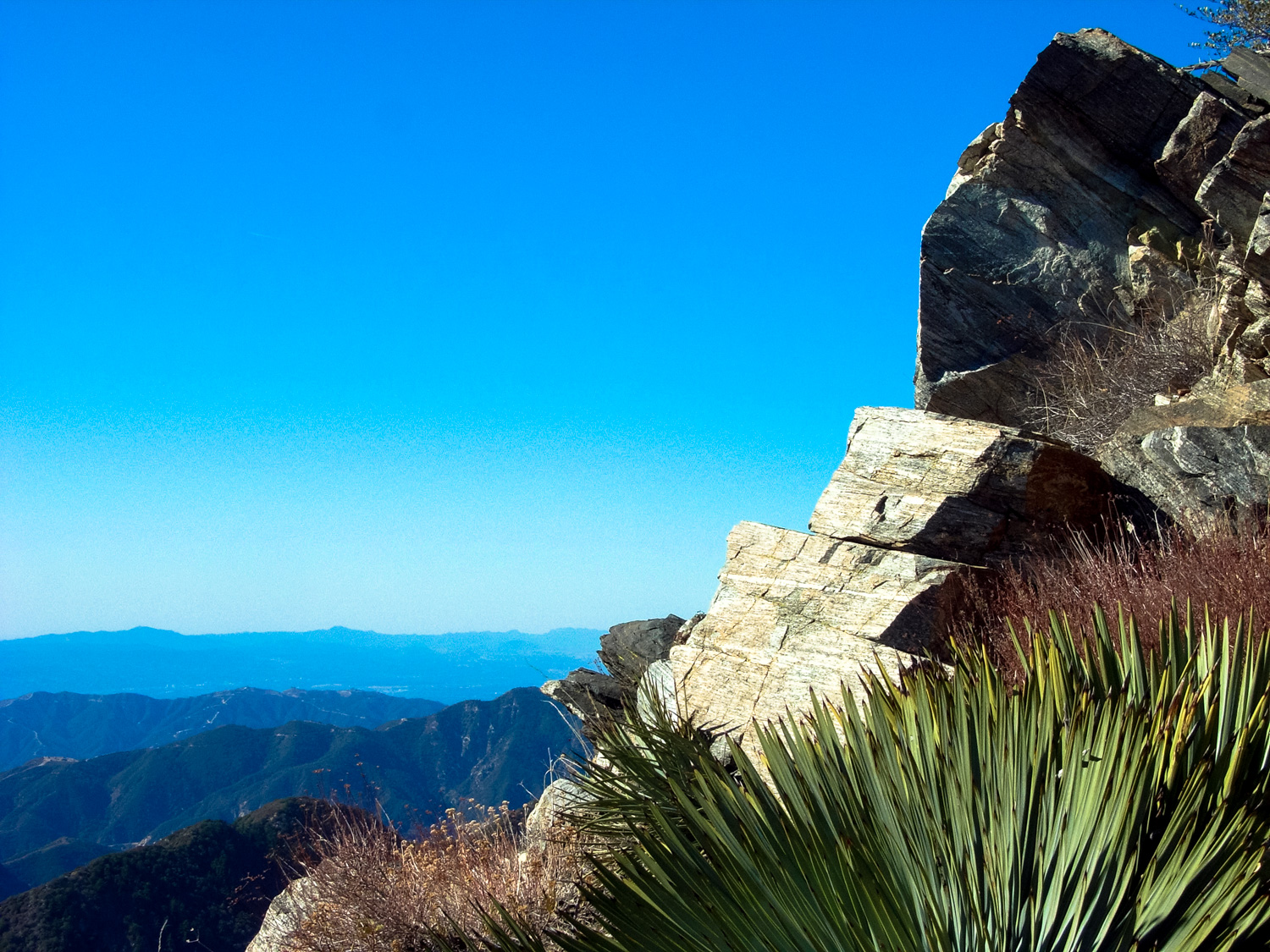 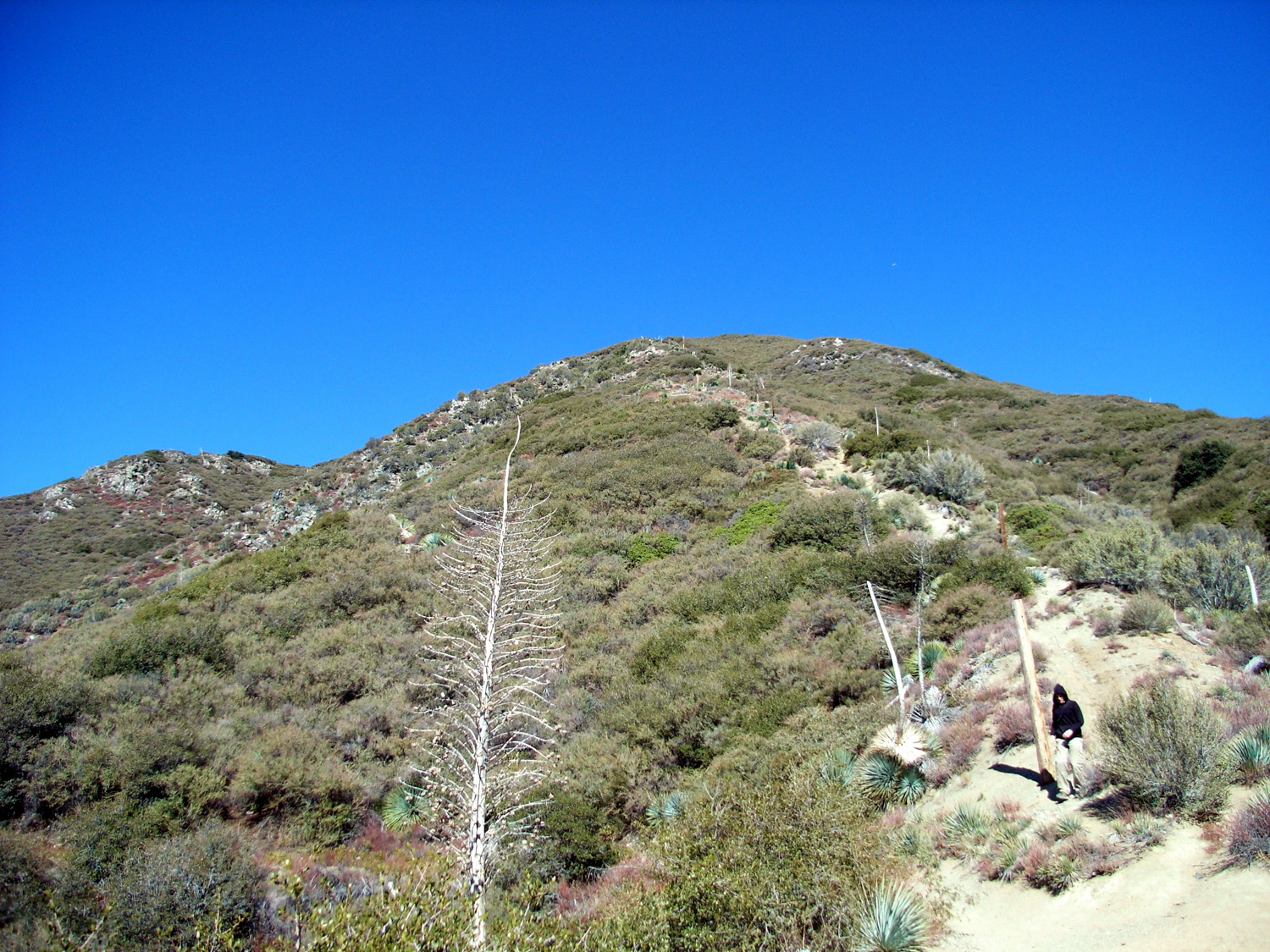 Very good from Red Box to the Strawberry-Lawlor saddle. The trail gets thinner as you go further up, but it's very well marked and well traveled. The trail to Lawlor summit appears rarely used, and you will have to keep your eyes peeled to look for the trail at times. When in doubt, just go up. The use-trail on the southern face is very rugged, and is not recommended as an ascent. Note that although this route is passable year-round (barring mudslides), there is zero shade. If you're hiking in the summer, get a very early start.