Mount Dana is the second highest peak in Yosemite National Park, straddling the border of Yosemite National Park to the west and Inyo National Forest to the east from a height of 13,057 feet above sea level. Highlights on this hike are summer wildflowers, Dana Meadows, and sweeping views of Mono Lake, the Sierra Nevada, and Dana Lake. Although a seemingly short route, Mount Dana is a strenuous, high altitude hike that will test your mettle. If Mount Whitney is on your radar, this hike makes an excellent trial run.

Mount Dana is named after James Dwight Dana, a geologist from the 1800s who was instrumental in advancing geology as a scientific field. Dana was born in Utica, New York on February 12, 1813 and graduated from Yale in 1833. Afterwards he became an assistant to his future father-in-law, Benjamin Silliman, a professor at Yale. Fun fact: Mount Silliman in Sequoia National Park is named after Silliman (thanks for that tidbit, Scott Turner).

While working as an assistant, Dana authored a 580-page book called the System of Mineralogy and Crystallography at age 23 and then joined the U.S. Exploring Expedition from 1838 to 1842. It is not hard to imagine Silliman sizing up Dana and saying, “You know, I have a daughter…” Dana and Henrietta Silliman indeed married on June 5, 1844 and Dana became the Silliman Professor of Natural History at Yale in 1856. He taught until 1890, and passed in 1895. Members of the Whitney Survey named Mount Dana after him in 1863.

The prime months to hike Mount Dana are August and September, when wildflowers are in bloom and the summit is typically snow-free. Tioga Road closes in late fall and re-opens every year in spring, generally between late May and Thanksgiving. Between those times, the road can close temporarily for storms, so check the road status before you go, particularly in May, October, and November. Even when Tioga Road is open, snow can linger on Mount Dana into July, so if summiting in the snow is not your jam, August and September are your best bet. 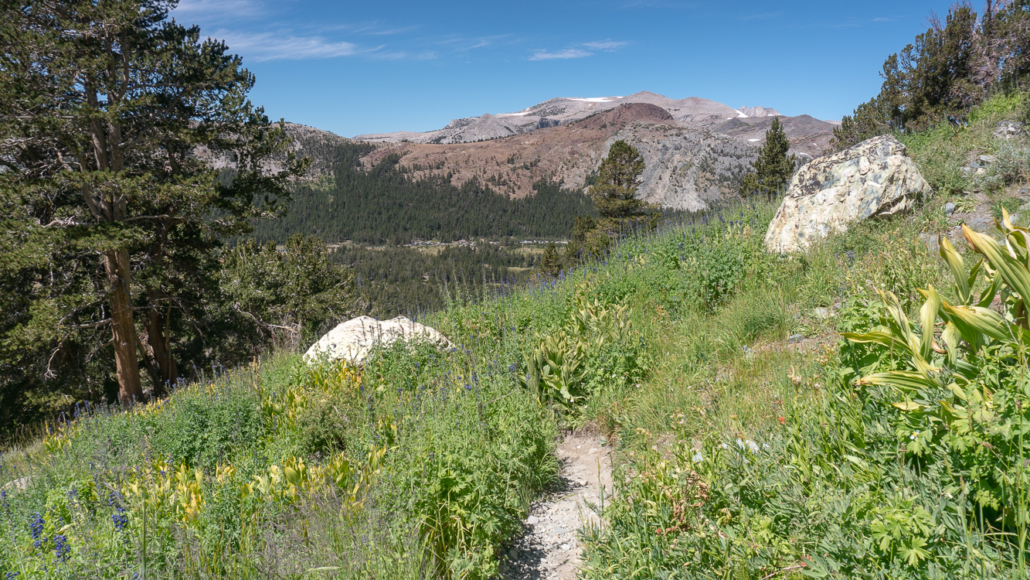 The trail to Mount Dana is a “social trail”—Yosemite National Park rangers do not maintain it or patrol it. Aside from a couple sections where you may have to take a moment to get your bearings, the trail is obvious and is not difficult to navigate. With that in mind, the hike’s distance is deceptive. Although you may be used to banging out a 6-mile hike in 3 hours or less, this hike will likely take longer because of the combination of high altitude, steep slopes, and loose, rocky sections.

A Note About Altitude Sickness

Since Mount Dana is a high altitude hike, beginning just below 10,000 feet, there is a chance you will experience Acute Mountain Sickness (AMS). The International Society for Mountain Medicine defines AMS as having a headache plus one other symptom, such as vomiting, loss of appetite, fatigue, dizziness, light-headedness, and difficulty sleeping above 8,000 feet.

What can you do to help prevent AMS? Acclimate, ascend slowly, hydrate often, eat enough food, and take rest breaks. Spending a night between 8,000 feet and 10,000 feet can help your body adjust to the lack of oxygen in the atmosphere before you attempt your hike. Tuolumne Meadows (8600 feet), Ellery Lake, (9500 feet), and Tioga Lake (9700 feet) are just a few options nearby. Spending two nights, taking an acclimatization hike, and then returning to your lower sleeping elevation is also a good strategy.

During your hike, follow the golden rules of altitude sickness:

From your parking location, walk to the Tioga Pass East Entrance Station. Across from it is a small parking for official vehicles. Here, pick up the unsigned dirt trail next to the “Authorized Vehicles Only” sign, heading southeast. 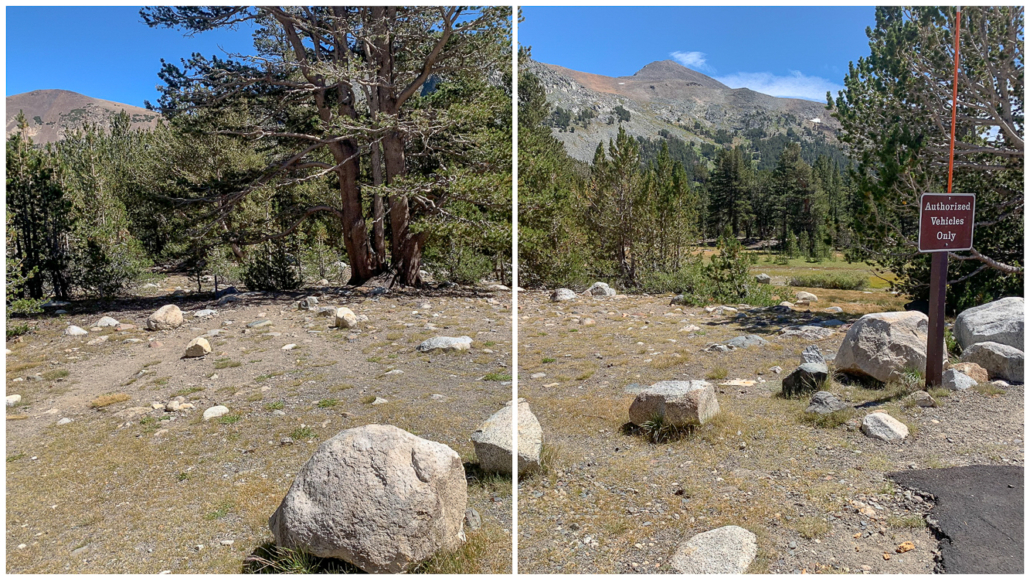 An unsigned social trail next to the Authorized Vehicles Only sign is the start of the Mount Dana hike. Mount Dana overhead. 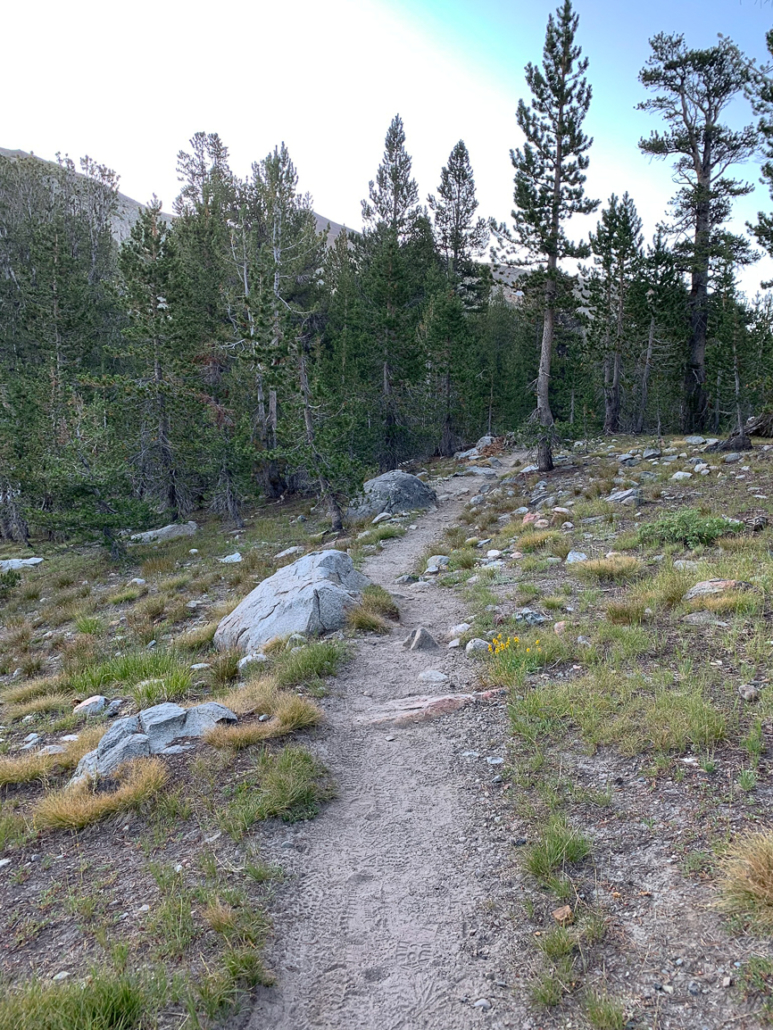 The trail starts off fairly level, heading southeast through a pine forest towards Dana Meadows.

Follow the dirt trail through a pine forest to Dana Meadows. The scattered kettle ponds here are remnants of Tioga-age glaciation that occurred between 26,000 and 18,000 years ago. During that time, an ice field 2,000 feet thick swallowed Tuolumne Meadows. High peaks, like Mount Dana, swam above it like solitary islands called nunataks. As the ice retreated, it sheered away pieces of the nunataks, leaving them sharply formed, as opposed to the rounded features you see in Tuolumne Meadows. The ice field also deposited large chunks of ice as it retreated, creating the kettle ponds. 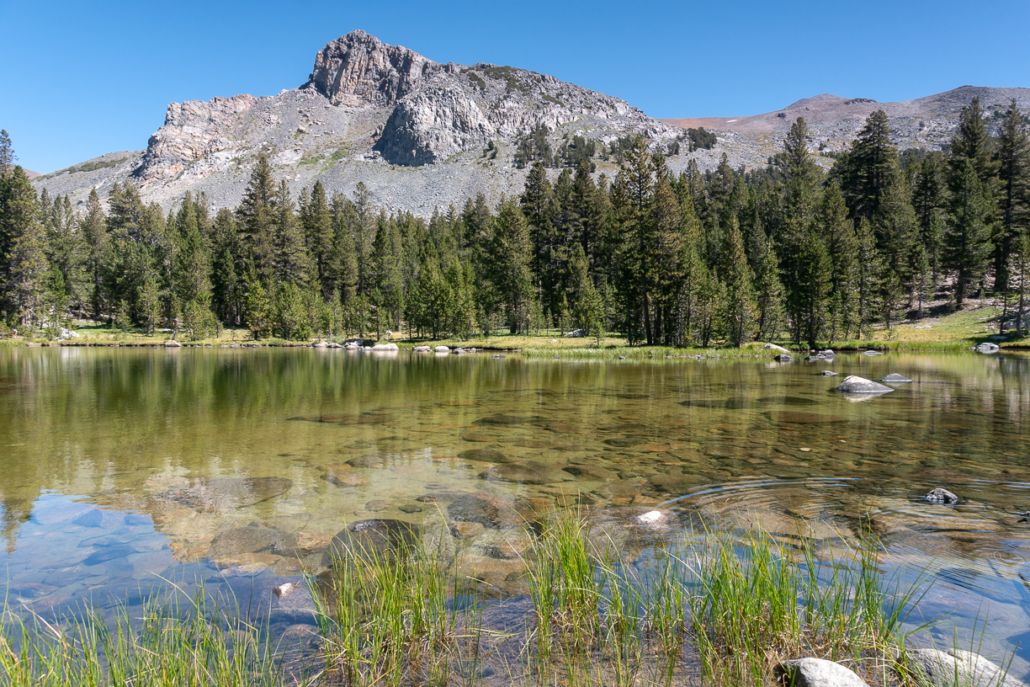 Scattered kettle ponds in Dana Meadows pack a scenic punch at the start of the hike.

Above the tree line, at 1.0 mile, the trail steepens and becomes fainter. Clamber up through boulders (squats come in handy here), gaining over 1,000 feet through the next mile-long section. Past the tree line, the route to the summit is fully exposed to the sun. The boulders transition to a scree field with the occasional cairn. Mammoth Peak, at the northern edge of the Kuna Crest, rises to the south, and alpine lakes reveal themselves as you climb higher, shocks of admiral blue against reddish-orange rock. 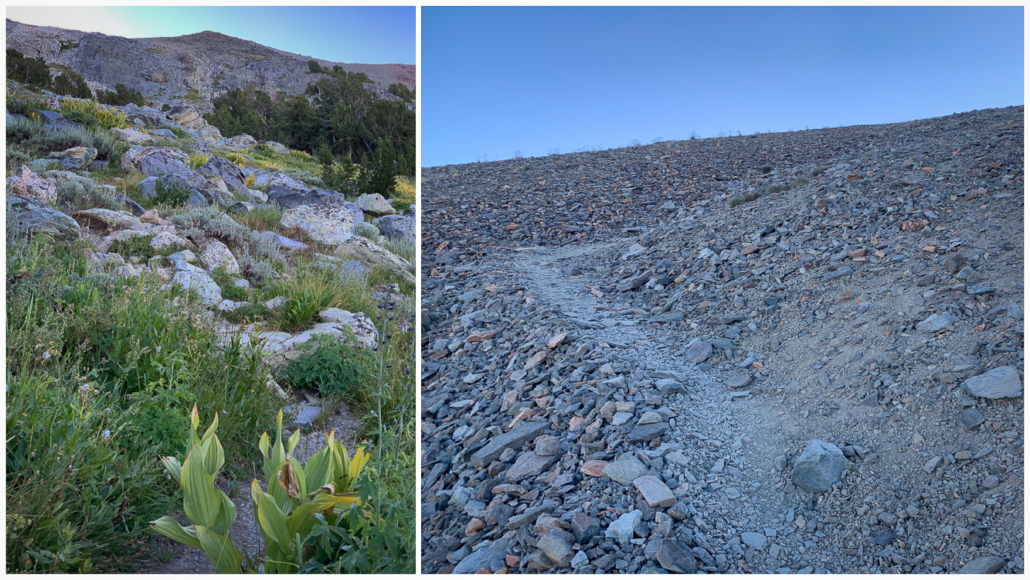 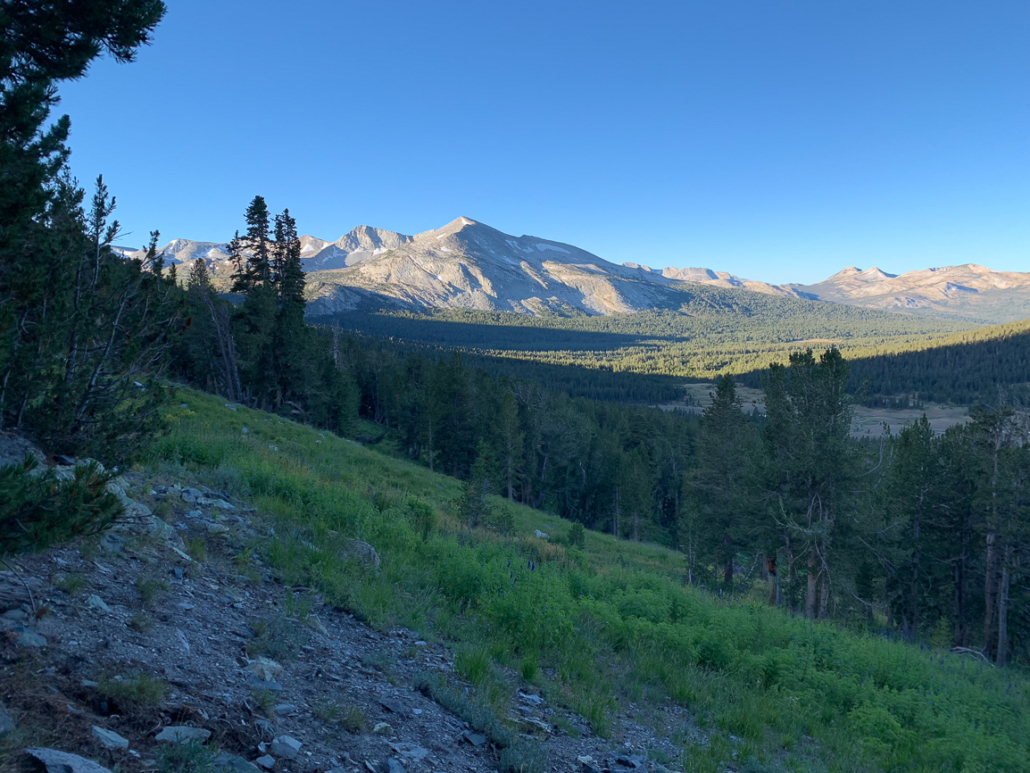 Mammoth Peak is one of many peaks visible early on the trail. 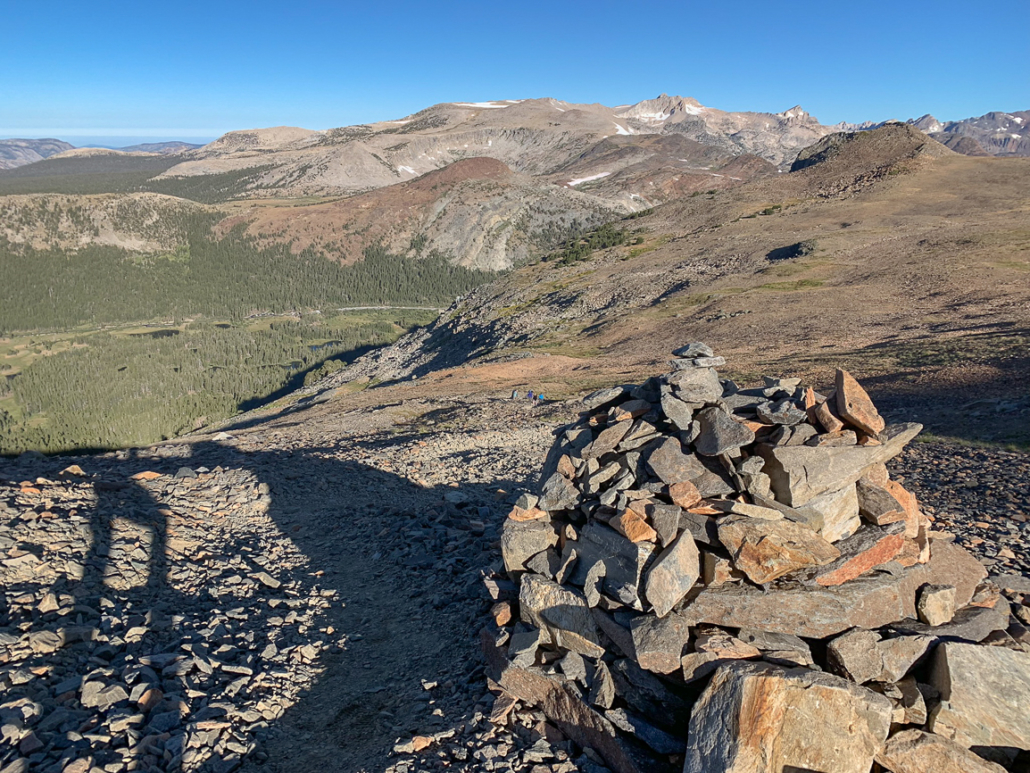 View from the scree field looking west towards Tioga Pass and Dana Meadows.

At 2.0 miles, reach a flattened plateau with two wind breaks. This is a great spot to take a break. Looking west, you have a 180-degree vista of Sierra peaks. You may see curious marmots, ground squirrels, and pikas. Tiny cars move like ants on Tioga Road below. At 11,700 feet, some people choose to turn around here. Although this spot is a wonderful break after steep climbing, your objective, Mount Dana, is right there, tantalizingly overhead. 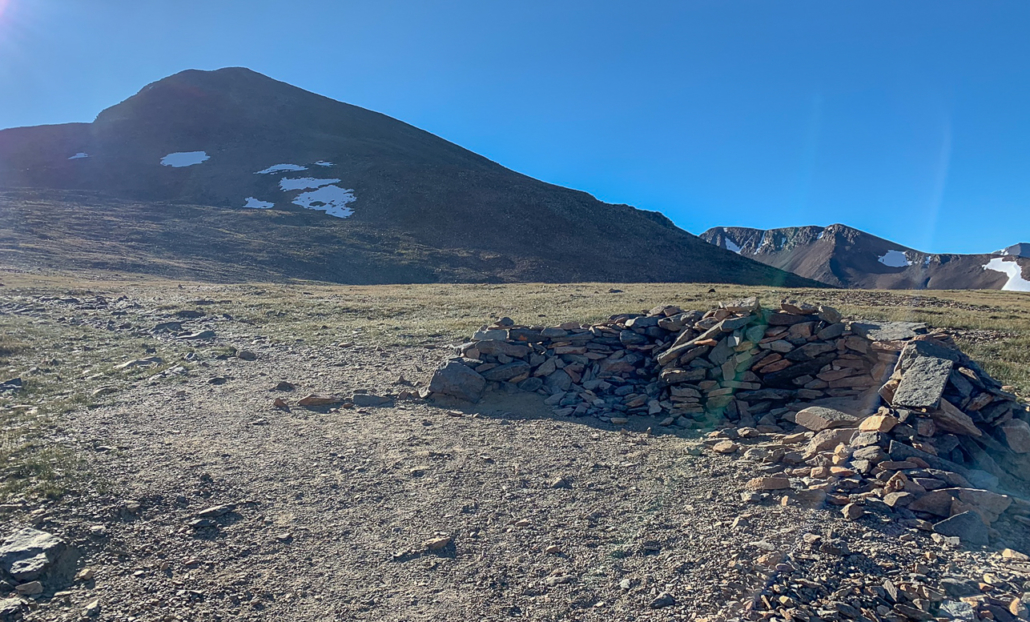 A wind break in the brief, flattened plateau below Mount Dana.

Past the wind breaks, follow the trail across the plateau for 0.3 miles. Reach the bottom of a loose talus slope and begin the toughest part of your climb yet—ascending 1200 feet over 0.7 miles on tight switchbacks. Sometimes the trail is faint and it is a “choose your own adventure” up to the next cairn. Although we were in the full sun at this point, it was cool and windy. 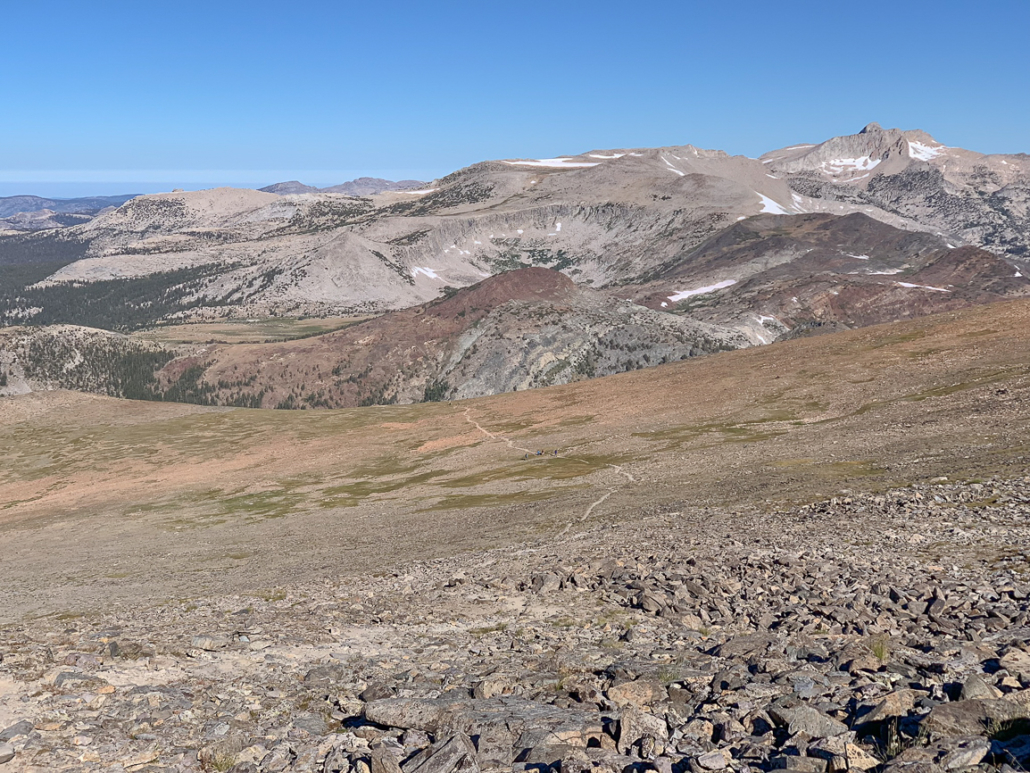 Hikers making their way across the plateau on the way to the talus slope. 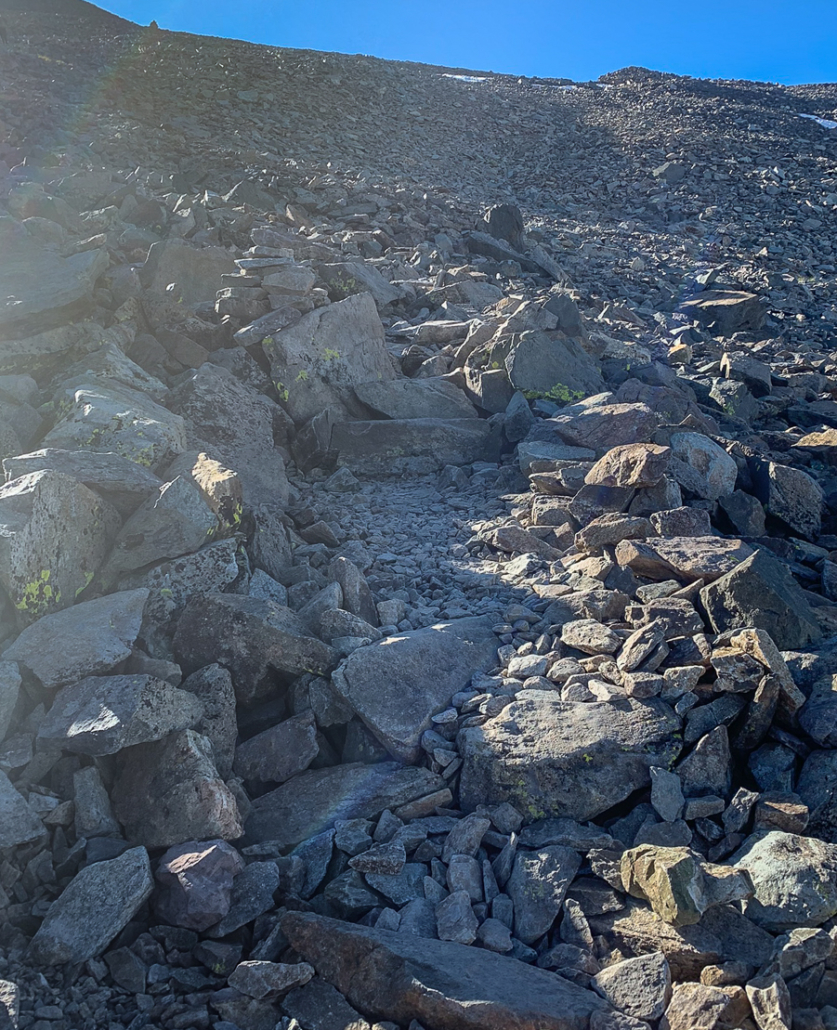 Loose rocks on the talus slope. 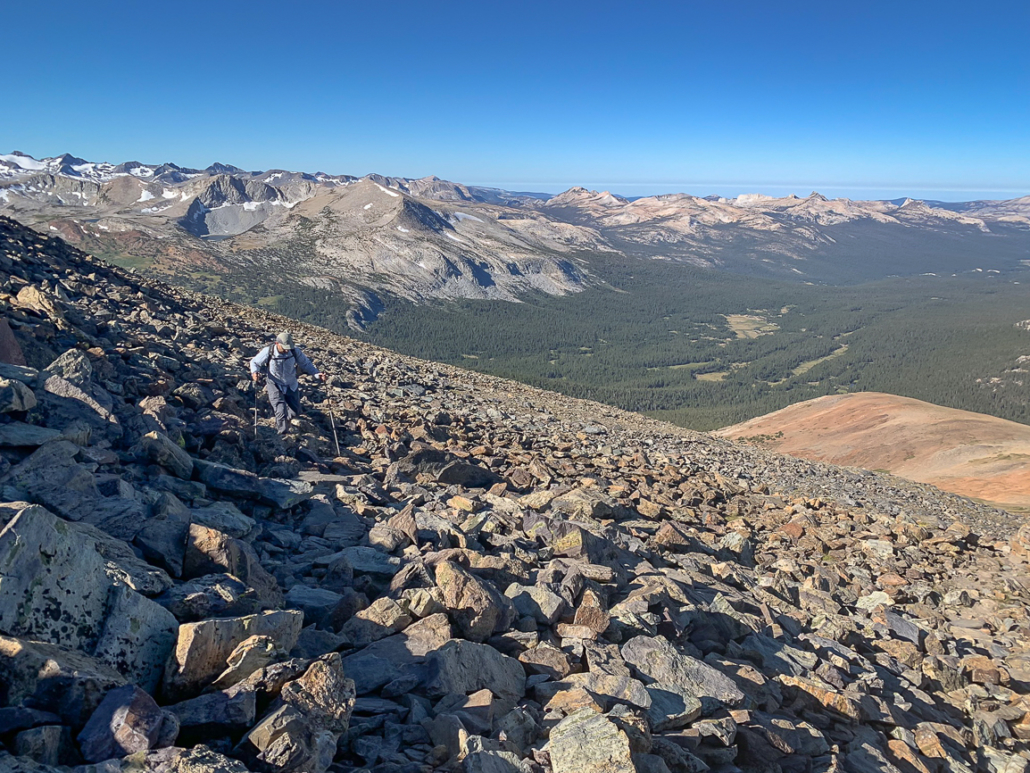 Stunning views of the Sierra and valleys from the talus slope.

At 3.0 miles, reach Mount Dana’s rocky summit, peppered with sharp, piercing rocks. To the northeast are the Dana Plateau, Dana cirque, and ice-blue Mono Lake. Looking southwest you will spot glacier-capped Mount Lyell, the highest peak in Yosemite National Park at 13,114 feet. To the northwest is Tioga Lake and Saddlebag Lake. Follow the edge of the summit 100 feet north to see a hidden vista of Dana Lake in Glacier Canyon. Its translucent, cerulean water is breathtaking against the backdrop of Mono Lake and the Sierra Nevada.

A breathtaking view of Dana Lake and Mono Lake from the north side of Mount Dana’s summit. The flat area above Dana Lake is the Dana Plateau. Dana Lake is within Glacier Canyon in Inyo National Forest.

When ready, retrace your steps back to the trailhead. Look carefully on your way down and you may see pink snow, the result of algae interacting with sunlight. It is extremely fun to spot! Now go hit up your favorite snack shack for a well-deserved treat. 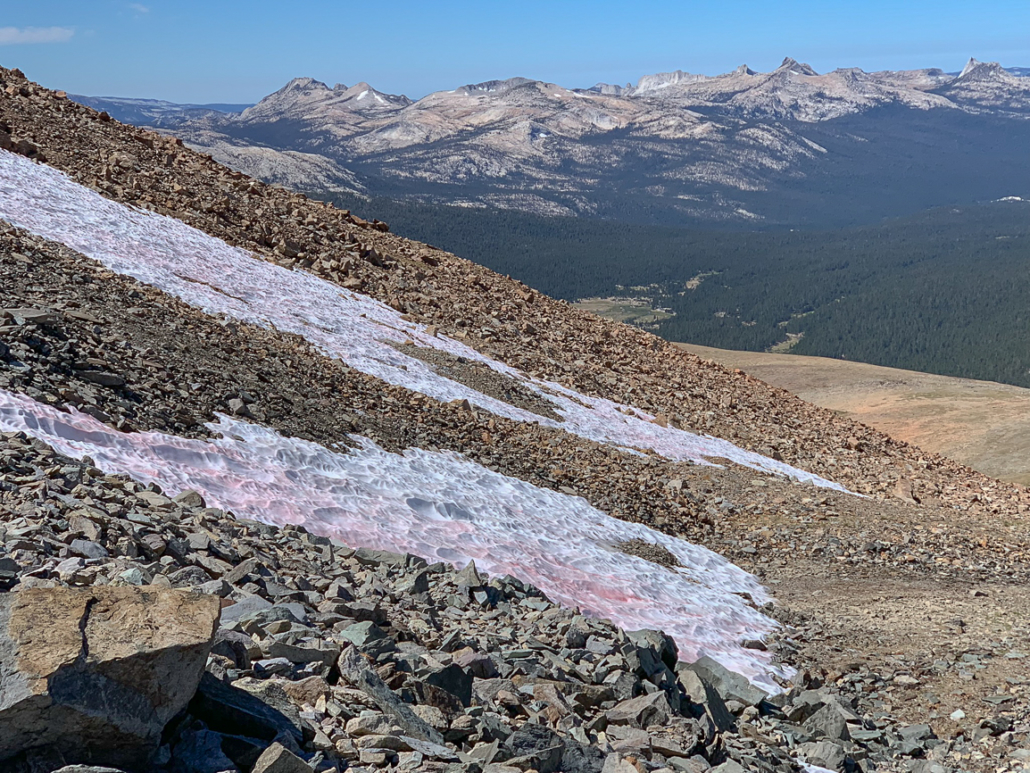 Pink snow (a.k.a. “watermelon snow”) on the flanks of Mount Dana. 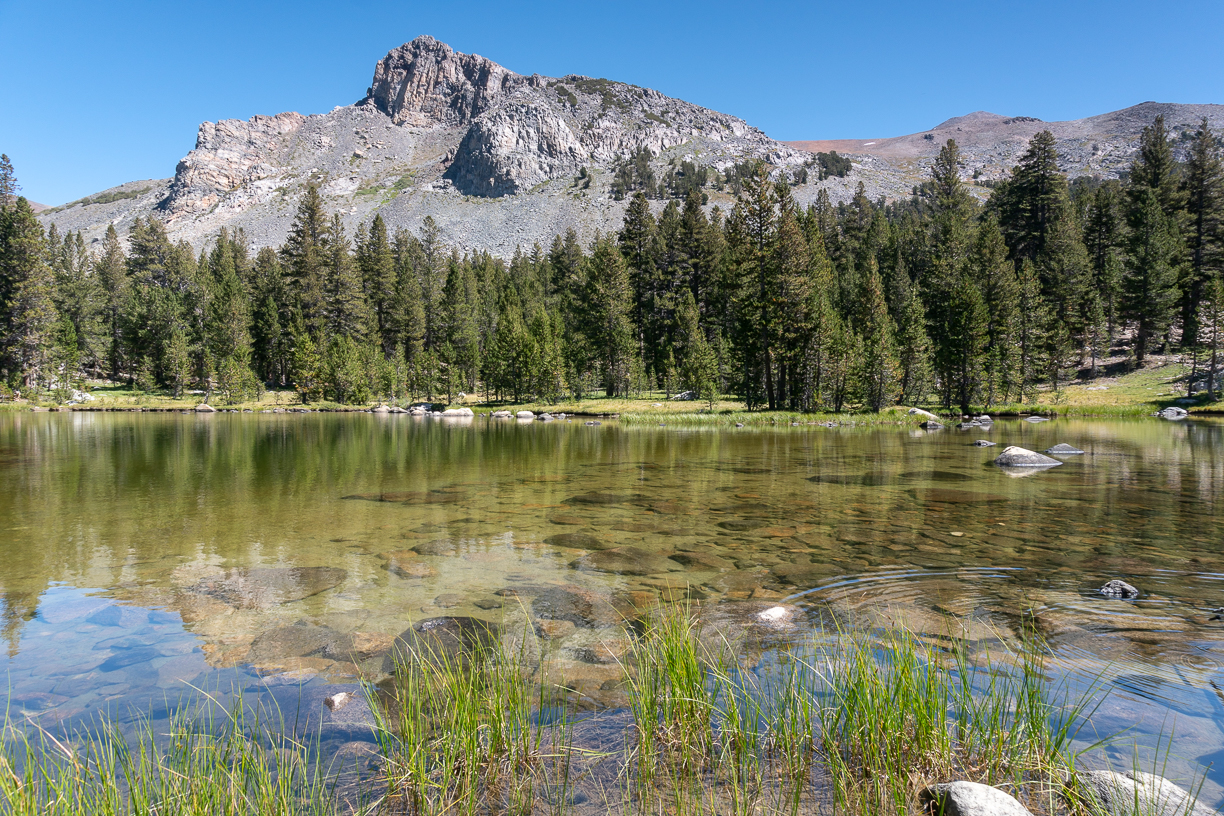 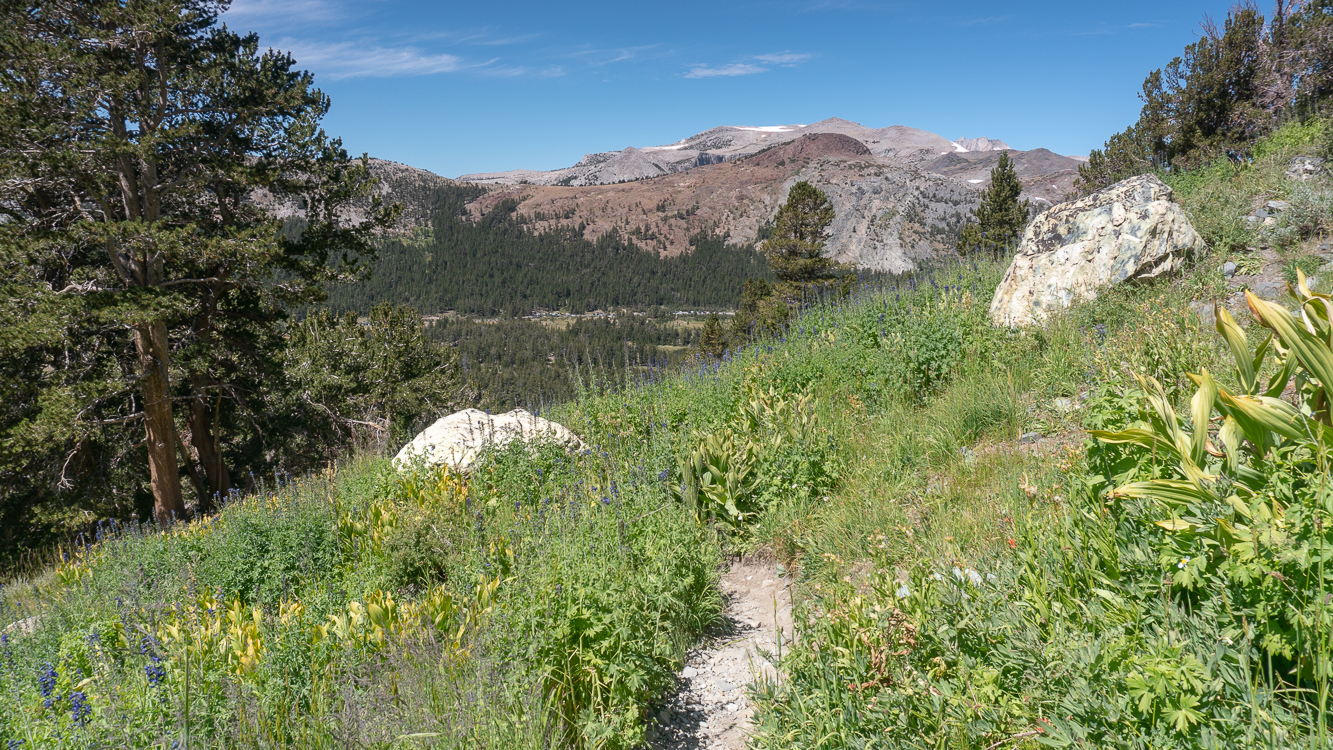 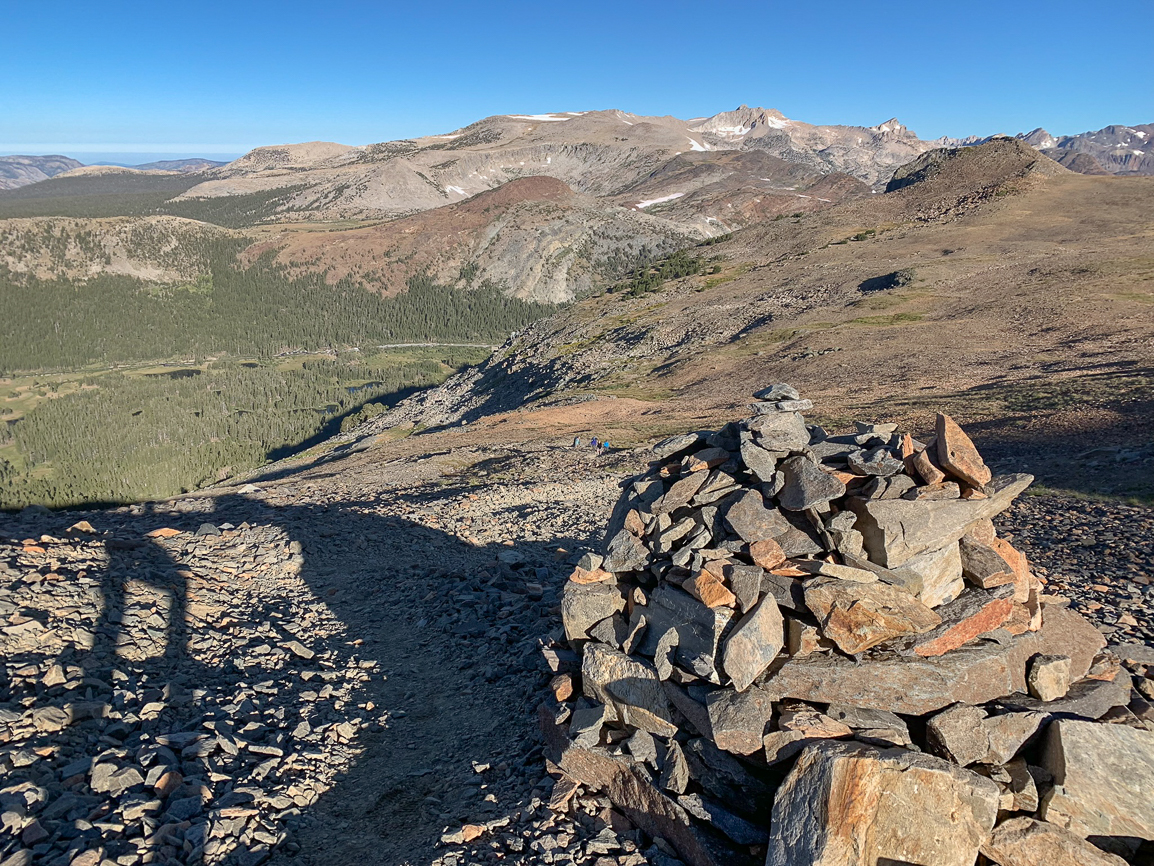 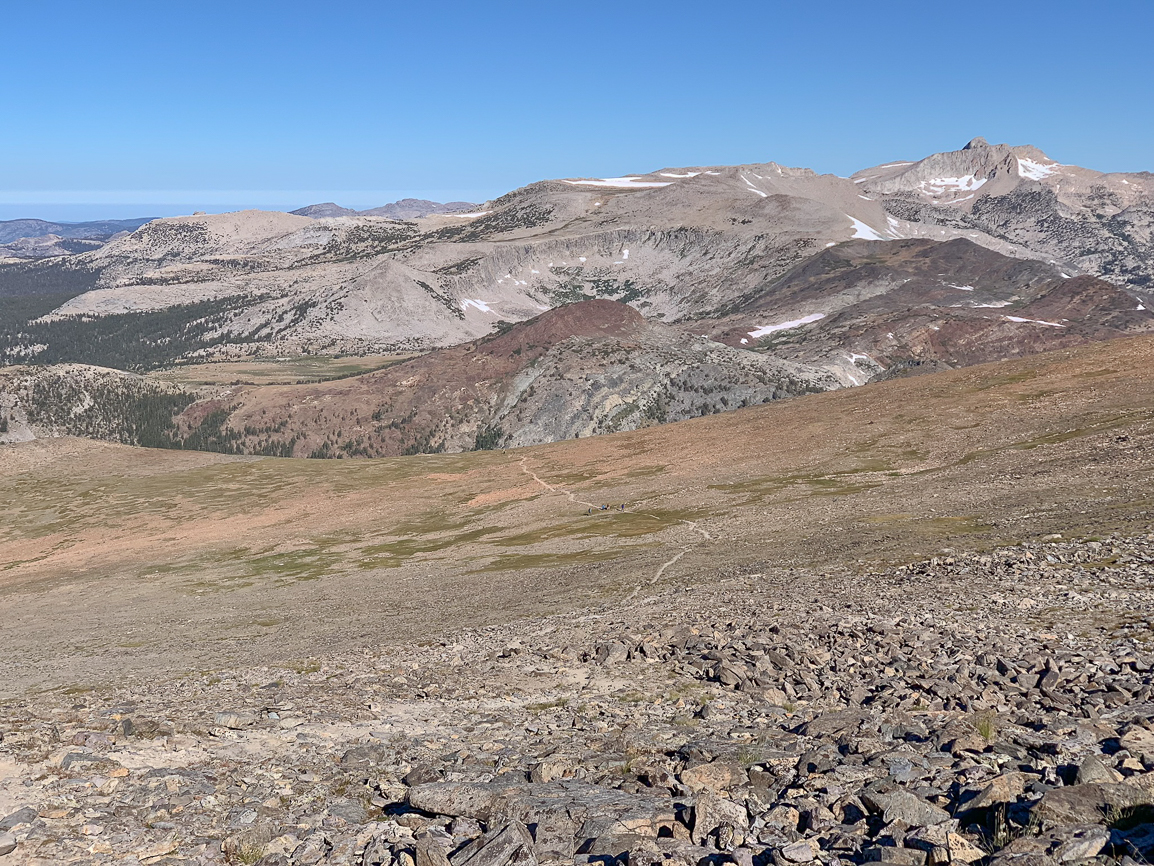 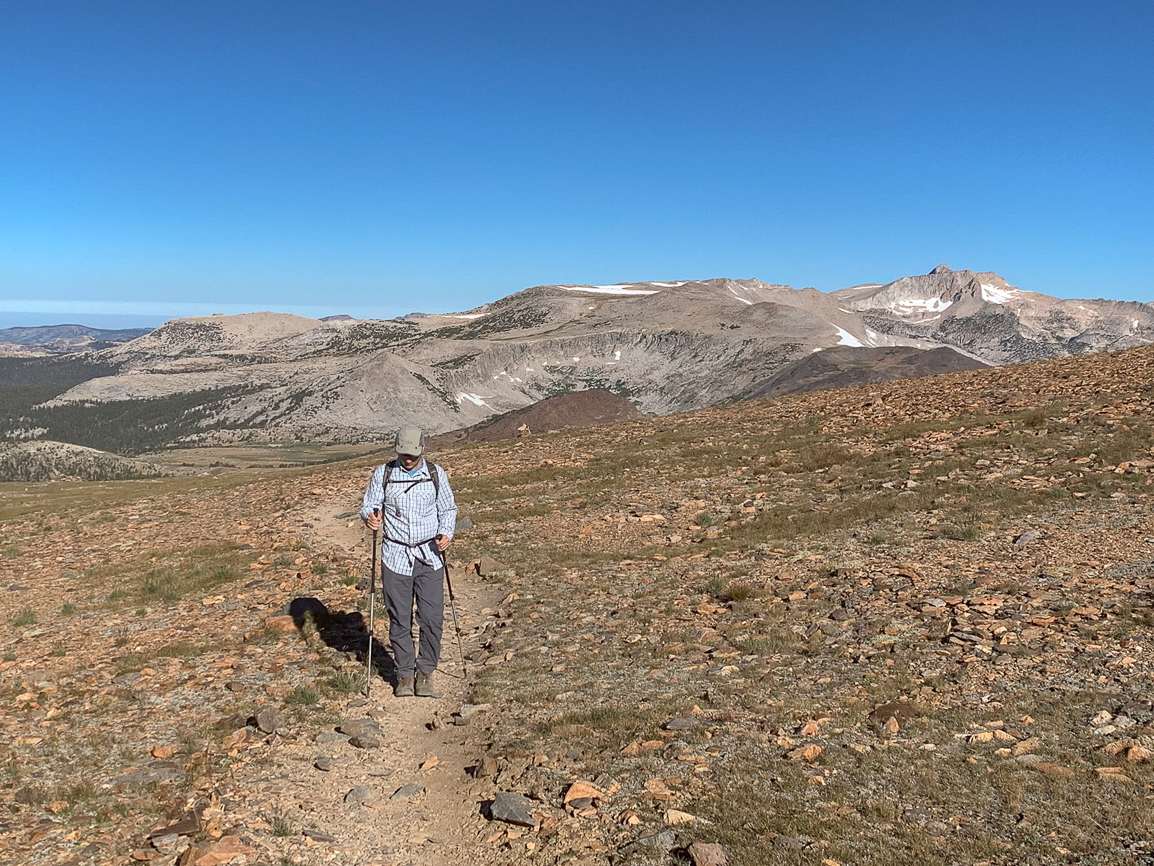 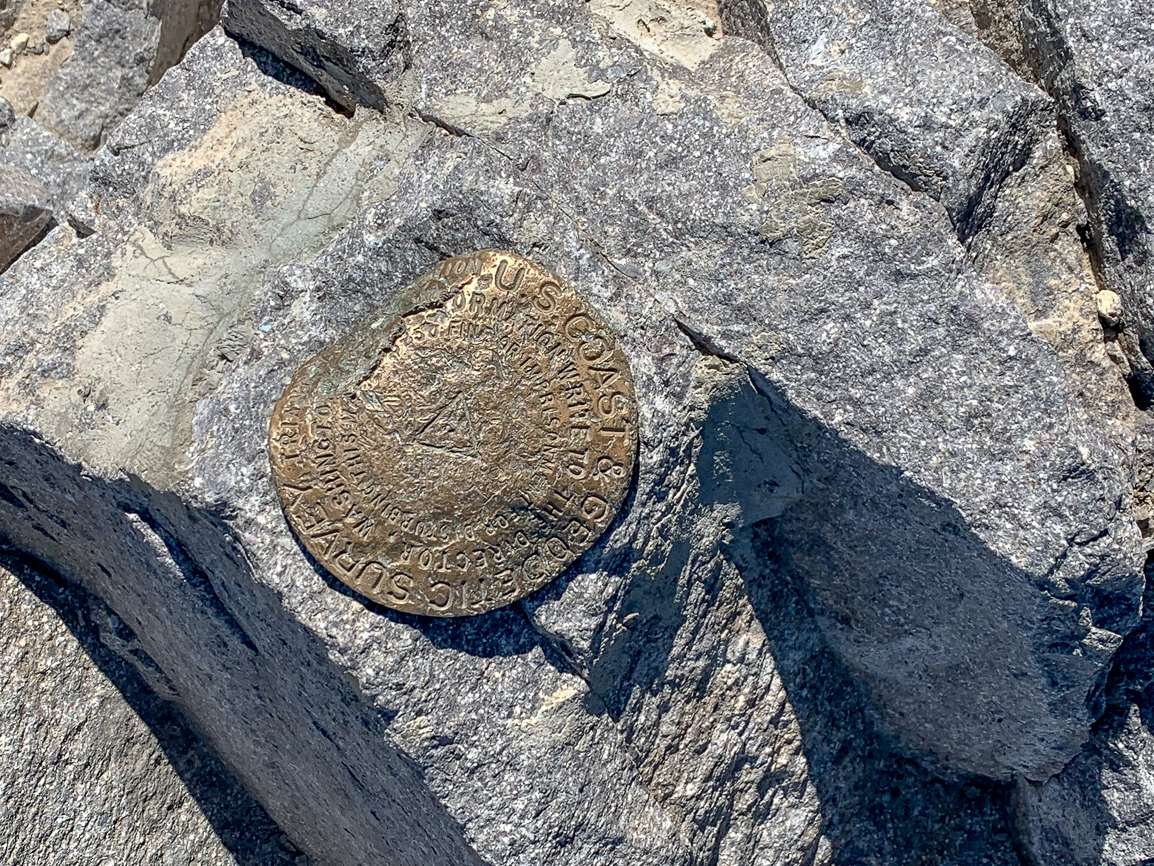 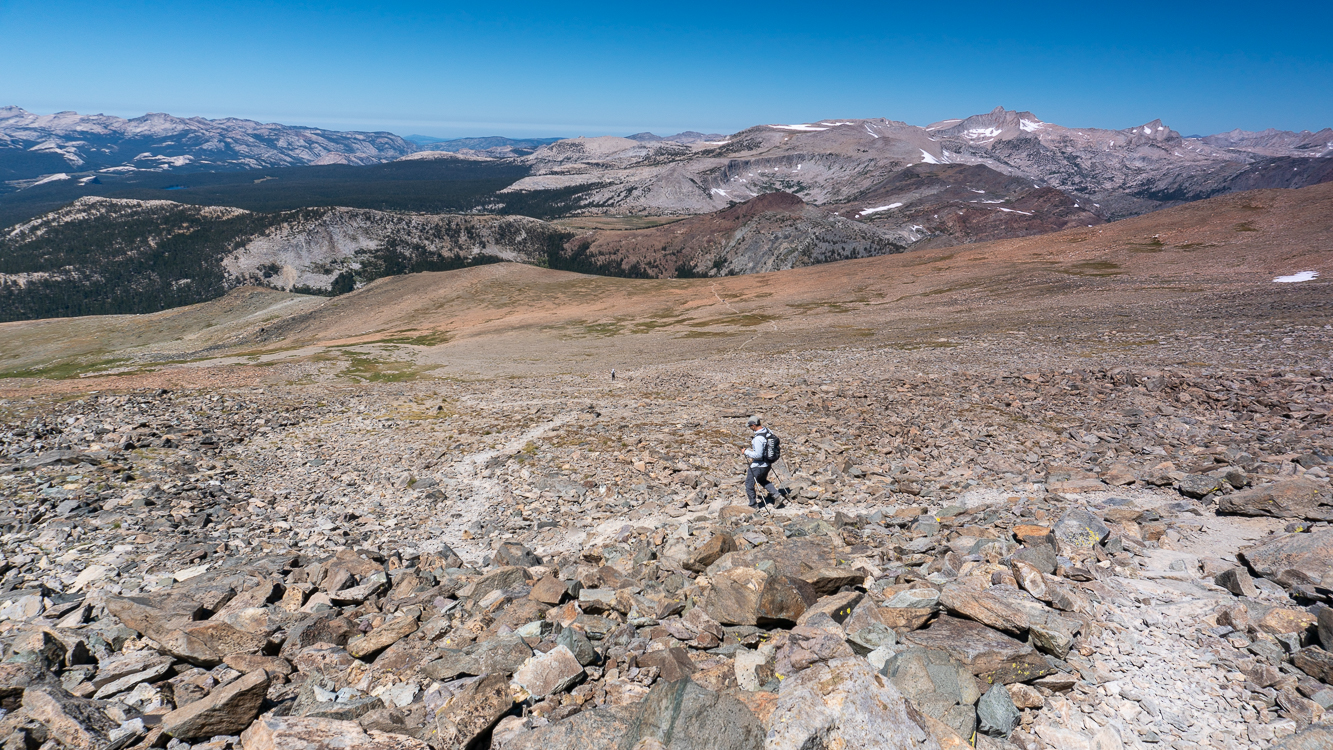 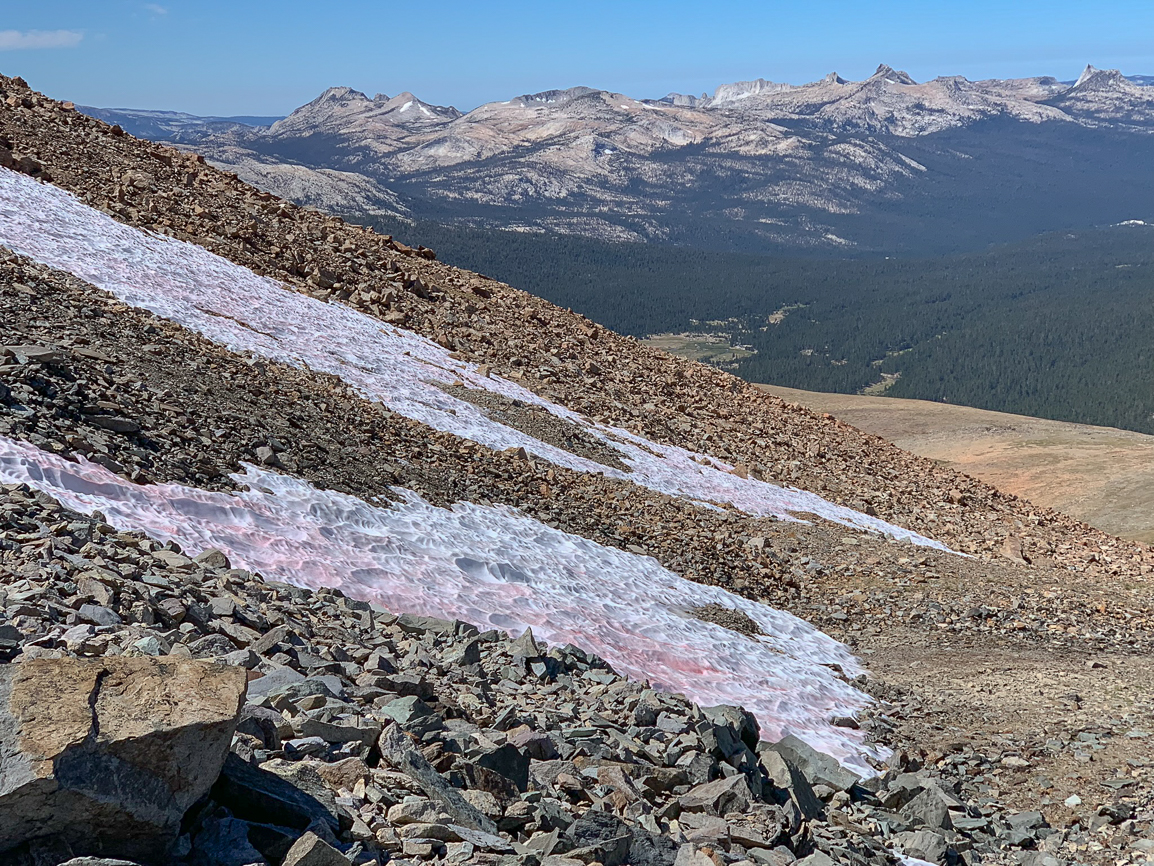 Mount Dana is a strenuous, high altitude hike. The trail is clear in the beginning through Dana Meadows and then becomes rockier and less stable, switchbacking through scree and talus to the summit. Most of the hike is exposed. While there are some ambiguous sections, on the whole, the trail is not difficult to follow.

Tuolumne Meadows, elevation 8600 feet, is a seasonal campground five miles west of the Tioga Pass Entrance Station. It is generally open from July through late September. There are 304 tent and RV sites ($26 per night), 7 group sites ($50 per night), and 4 horse sites ($30 per night). Half of the sites are reservable, the other half are first-come, first-served. Each campsite has a fire ring, picnic table, and food locker. Bathrooms with drinking water and flush toilets are available.