This little-known hiking route takes you to some of the best front-facing views of the Hollywood Sign AND won’t put you into conflict with Hollywoodland residents complaining about increased traffic on their narrow, winding, circa-1920s streets — it’s a win-win for visitors who want to get in a decent hike with their Hollywood Sign selfies and for residents who’d prefer to keep rideshare traffic off their streets.

People are always looking for ways to hike to the Hollywood Sign. Honestly, if you’ve spent more than a day or so living and hiking in Los Angeles, someone’s going to ask you the best way to get to that old real estate advertisement, so you might as well be prepared.

If you want to get to the summit of Mount Lee (where the Hollywood Sign is located), a trek up Brush (Bronson) Canyon is a relatively lengthy but approachable route, while the hike on the Eileen Getty Ridge Trail past Burbank and Cahuenga Peaks is shorter and tougher but feels more like a “real” hike. The issue is once you get to the top of Mount Lee, you’re looking at the back-side of the Sign, separated by a chain link fence and thousands of dollars of fast-response security equipment.

Tourists and residents have come into increased conflict over access to front-facing views, as GPS and Google Maps have funneled an increasing number of visitors into a mountainous residential neighborhood where nearly 100-year-old road grades are definitely not built to accommodate that traffic. Lawsuits have closed formerly popular access gates to Griffith Park, and efforts to extend light mass transit to some of these potential trailheads has been met with opposition.

This should be standard procedure on all trails, but it’s especially important here where neighborhood complaints may further threaten public access (there are unfortunate precedents near popular trails in Rancho Palos Verdes and Whittier, among other SoCal locations) — hikers need to be on their best behavior here. Leave your bluetooth speakers at home, follow posted park rules, stay on established trails, and pick up litter if you see it.

That out of the way, this trek begins at the north entrance of the Hollywood Reservoir. No dogs are allowed along the reservoir trail, and there is a section of street parking here that is open from 6:30AM through evening times that depend on the season (a very clear sign with current times is posted on the entrance to the north gate). 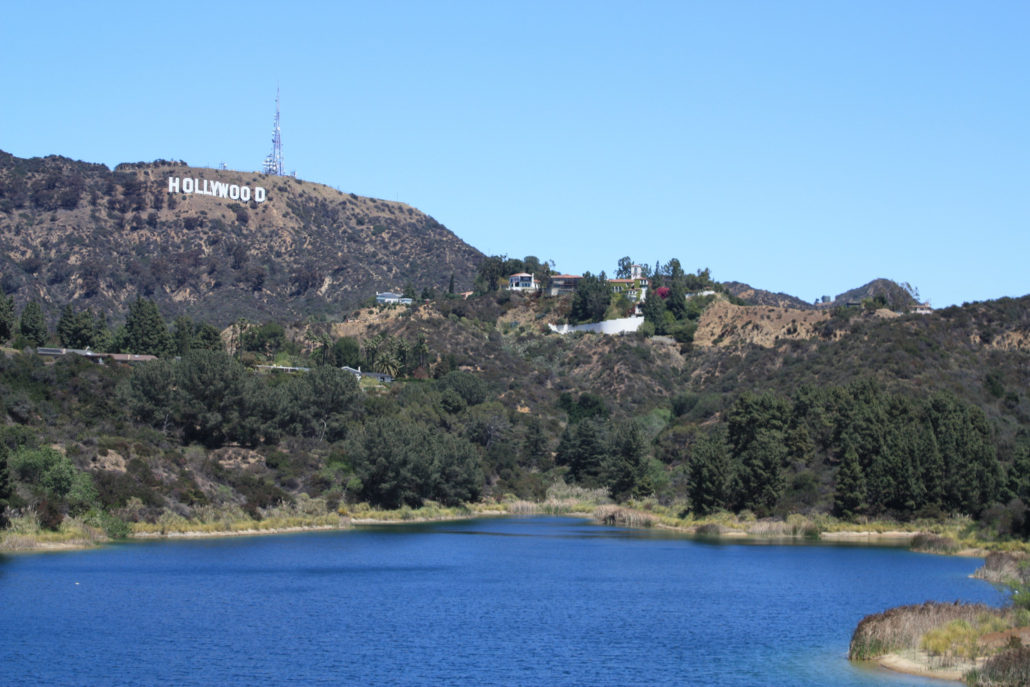 Views are good — as long as you don’t mind looking through a chain link fence. However, if you prefer your views fence-free, all you have to do is wait until about the 1 mile mark, where the trail crosses atop the historic Mulholland Dam. 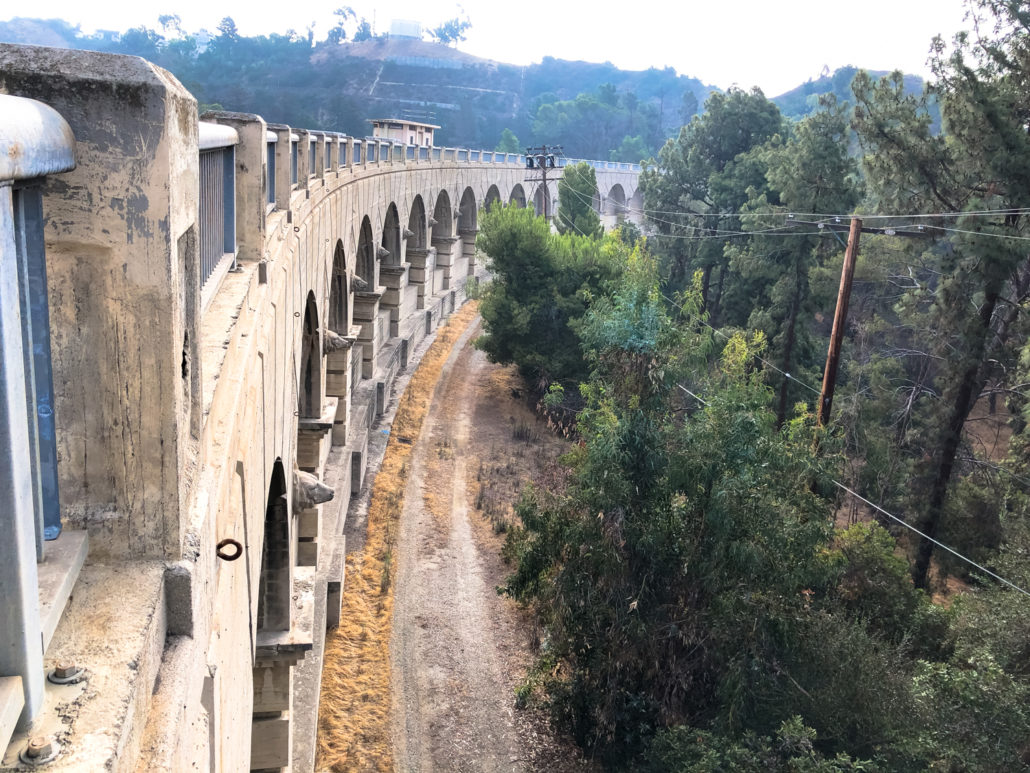 This beautiful structure was completed in 1924 and is still an active reservoir (hence the lack of access to the water and extensive fencing). Standing atop the dam actually will give you a lovely view of the Hollywood Sign, and is a destination worthy of its own hike in case you didn’t want to spend a lot of time on the trail (complete the route described in this trail guide to finish a loop around the Reservoir).

Once you cross the dam, you’ll note a water fountain and portable toilets at the north end of Weidlake Drive (an alternate trailhead — this southern entrance has a MUCH smaller amount of parking spaces and requires traveling through a residential neighborhood). 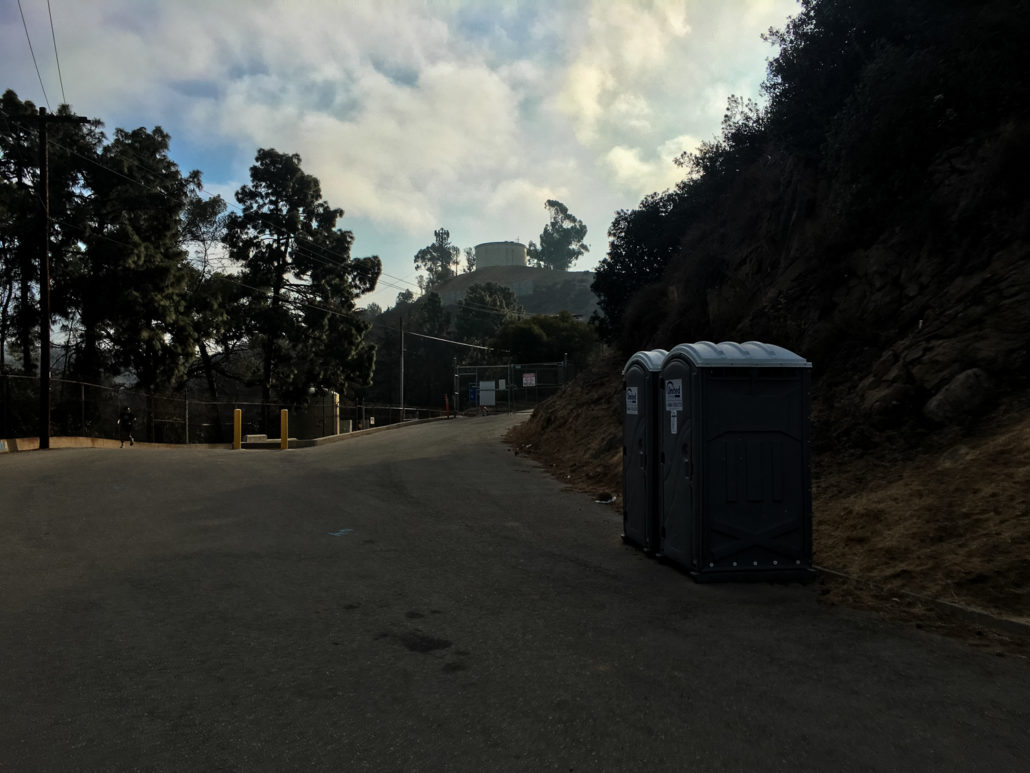 Follow the paved path on a short incline to another gated fence at about 1.2 miles and pass through to continue on the Mulholland Highway. 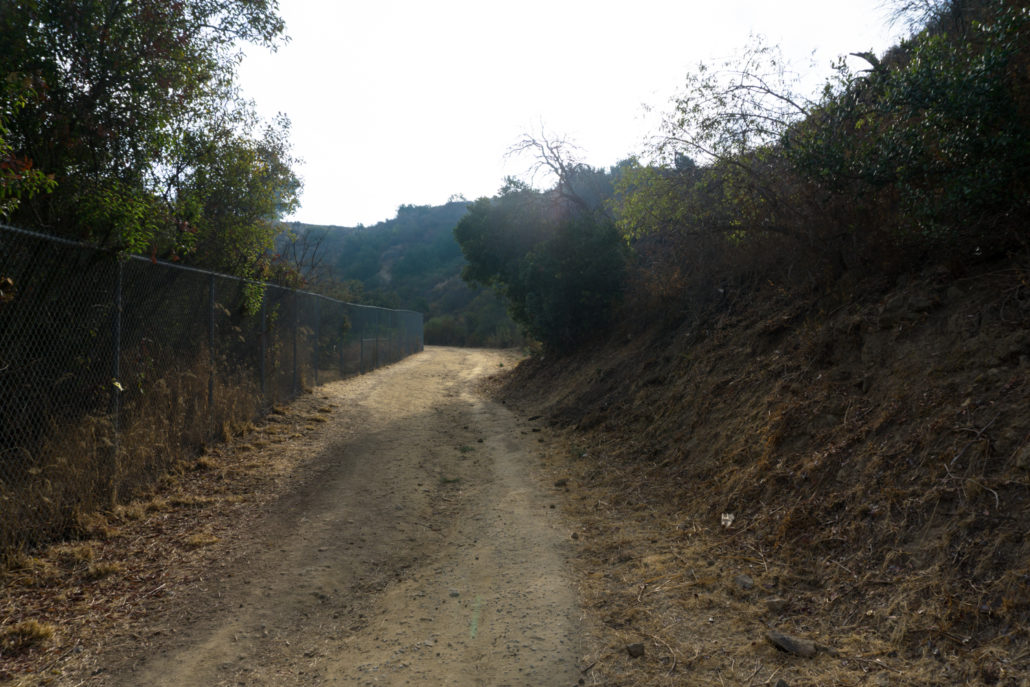 This old, unused road grade is inside Griffith Park itself, and is a remnant from a time when city planners dreamed of connecting Mulholland west of Cahuenga Pass here — but residential development in the pass prevented the completion of the paved road (thankfully!).

This route gains a moderate amount of elevation as it winds up and to the east of the Hollywood Reservoir — and provides some truly stunning views of the concrete structure as it heads north. 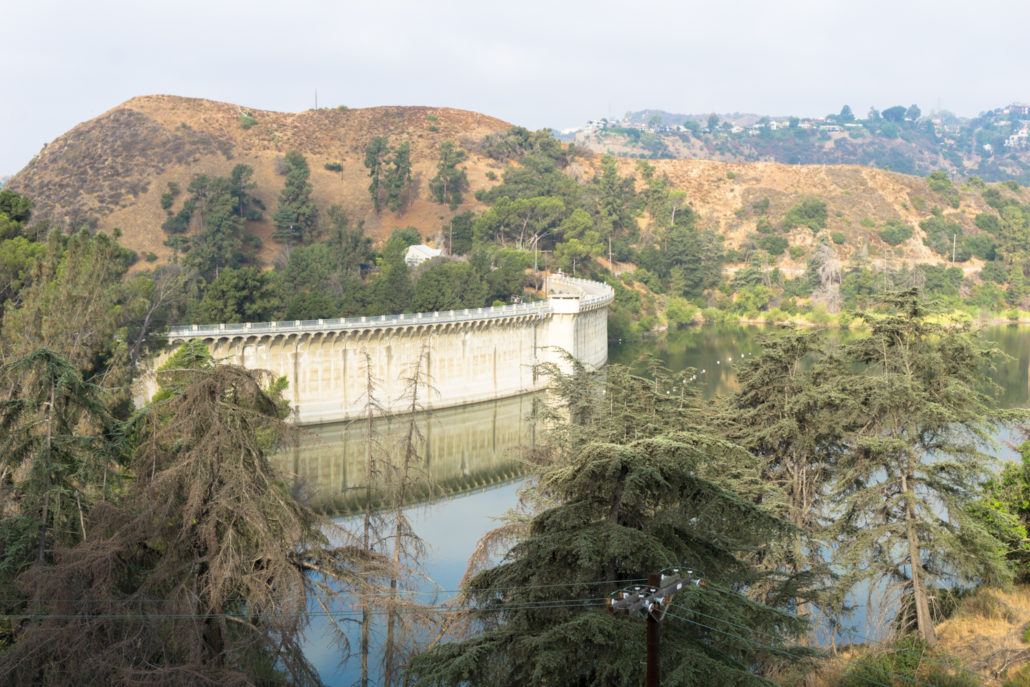 … and also on this trail, you’ll have some beautiful views looking north at the Hollywood Sign, too! 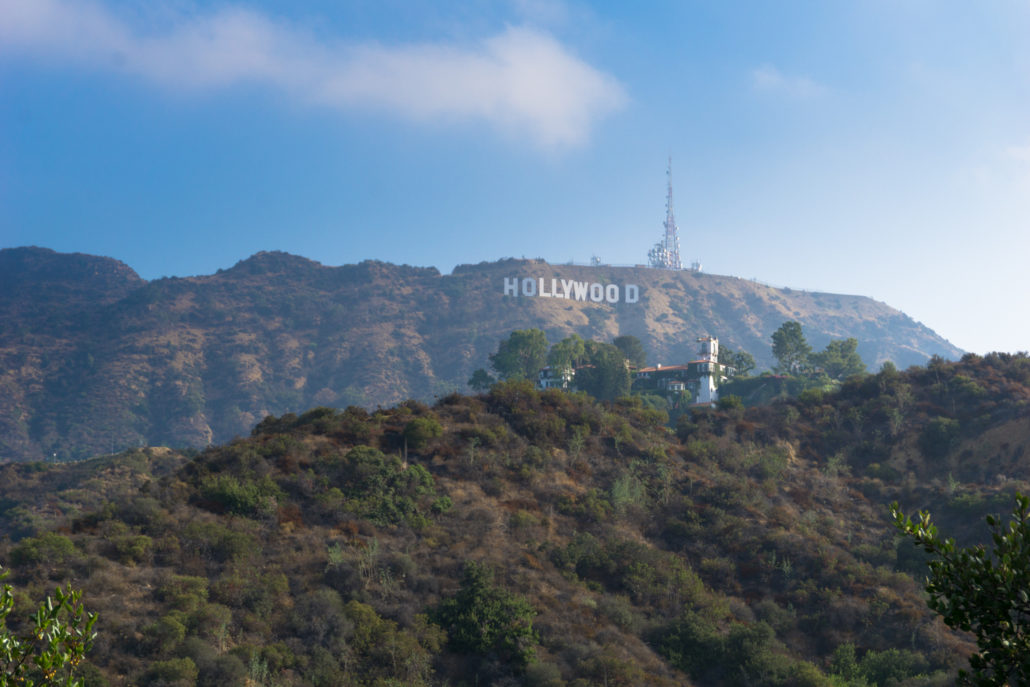 At 1.7 miles, stay left at the junction with the dirt Wetona Drive and the old road grade narrows considerably, becoming much more like a single track hiking trail than the remnants of a planned motor thoroughfare. 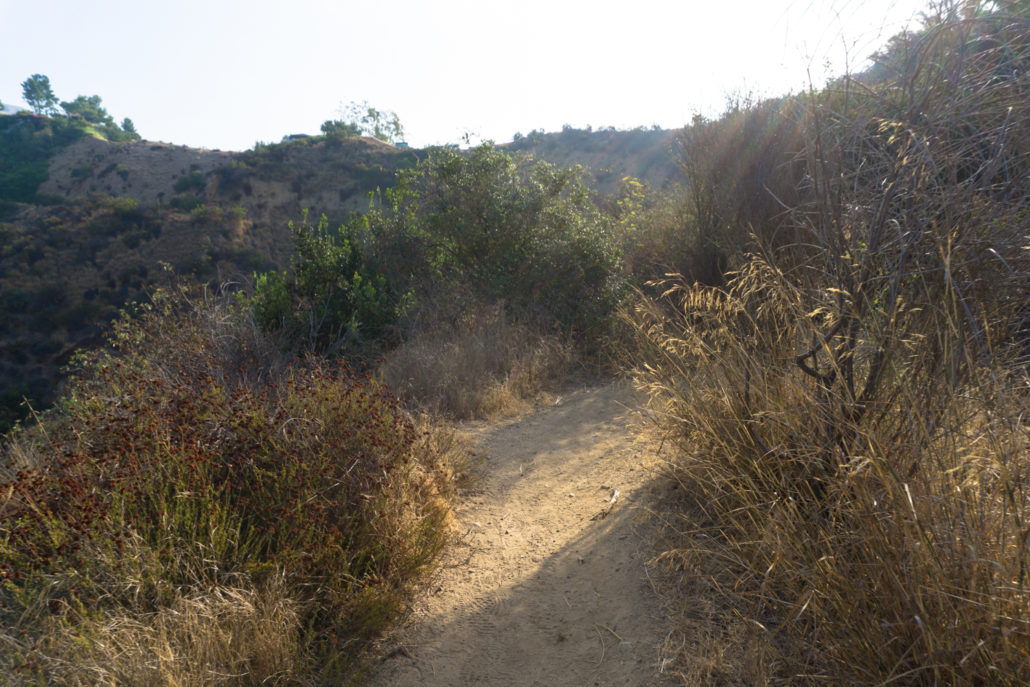 Chaparral and sage scrub take over this land formerly slated for houses … and eventually you’ll come up right up against that enormous white Mediterranean-style mansion with what are probably the best Hollywood Sign views of any home in Los Angeles. The trail skirts the side of a large wall and the last short section of the old Mulholland Highway grade functions as an access route to the house’s private driveway. Especially here, if you see some litter along the way, do all your fellow hikers a solid and pick it up. 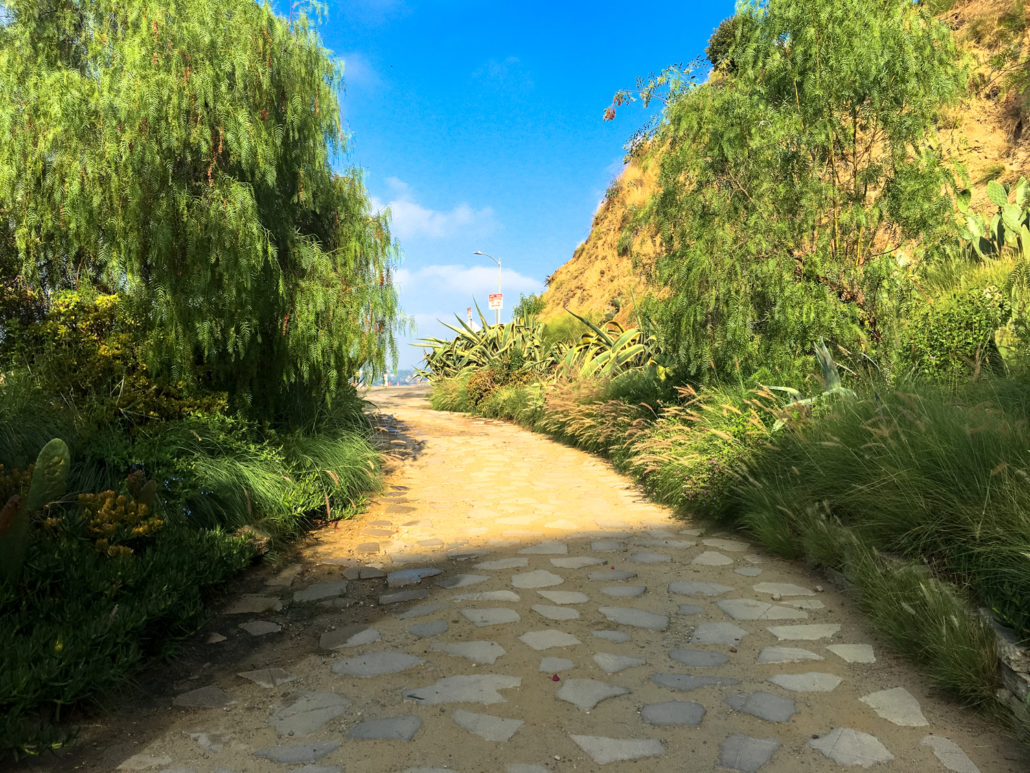 2.2 miles in, you’ll emerge from the relative wilderness at a popular viewpoint overlooking Lake Hollywood Park and the Hollywood Sign. 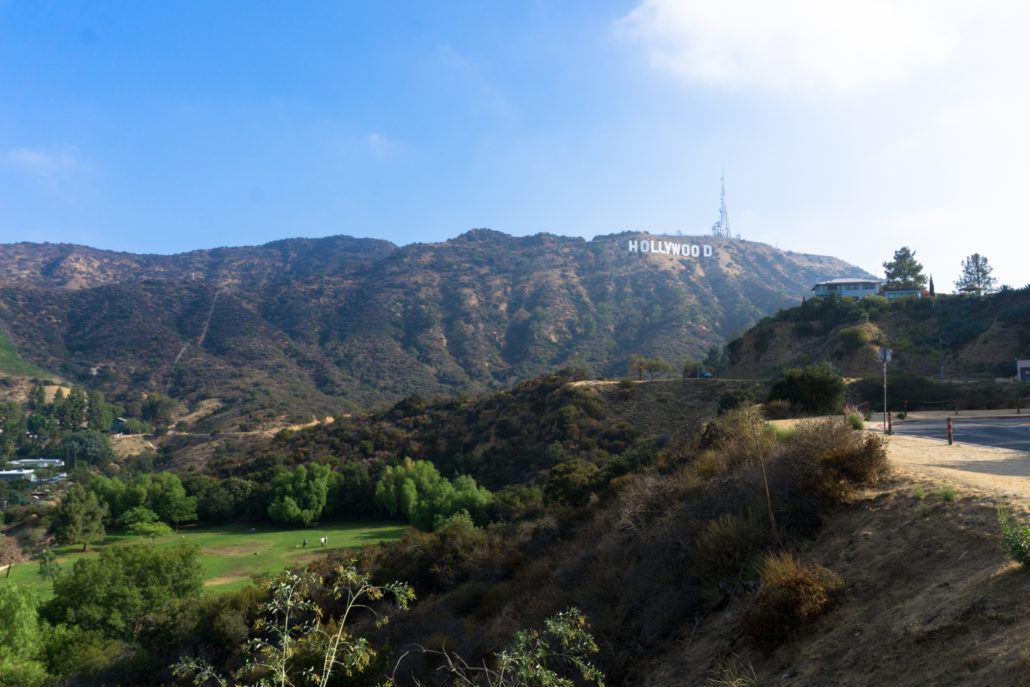 Lake Hollywood Park is a lovely little park that has a very clear set of official rules that are routinely ignored by its patrons. The area is known as a de-facto dog park, and while the park is dog-friendly, there are lots and lots of signs posted instructing patrons that the park is NOT an off-leash dog park. Still, even with rangers regularly visiting to issue citations, you’re almost guaranteed to see off-leash dogs running happily in the meadow beneath the Hollywood Sign.

Snap a selfie or two here, then head toward the park’s entrance by heading west on Canyon Lake Drive.

Pass the entrance (or head on in if you want to enjoy!) and continue on Canyon Lake Drive as it heads north into a residential neighborhood. 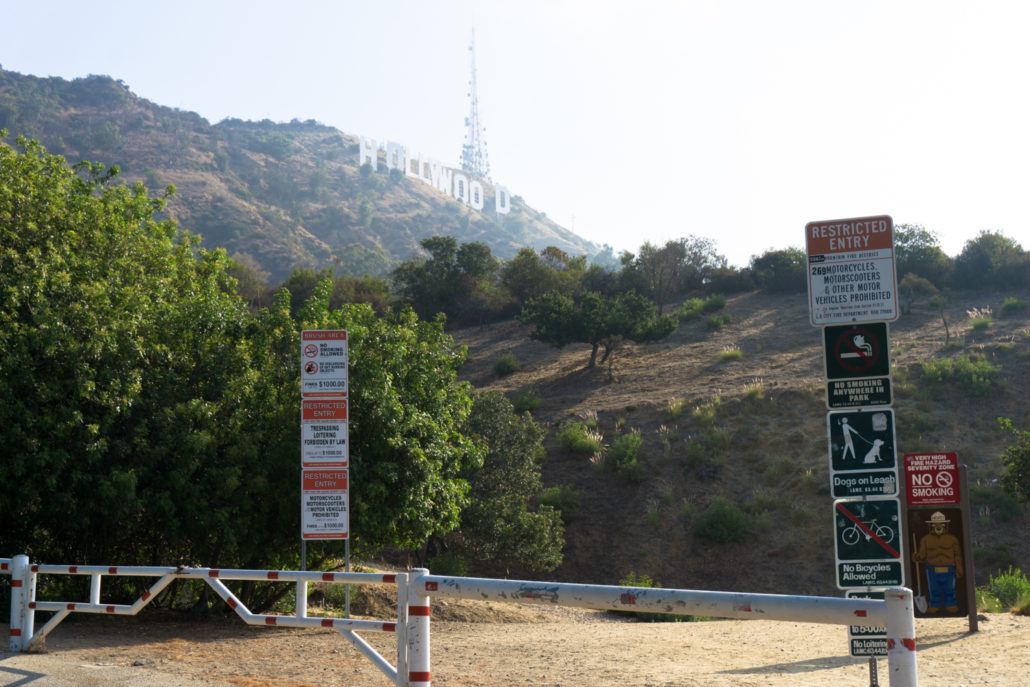 At 2.6 miles, the road ends at Innsdale Drive. Turn right here and you’ll come to this gate at the end of paved Innsdale Drive and the beginning of the Innsdale Trail.

This entire trail is only 0.8 mile long but provides some of the best hikeable front-facing views of the Hollywood Sign you’ll ever get to. 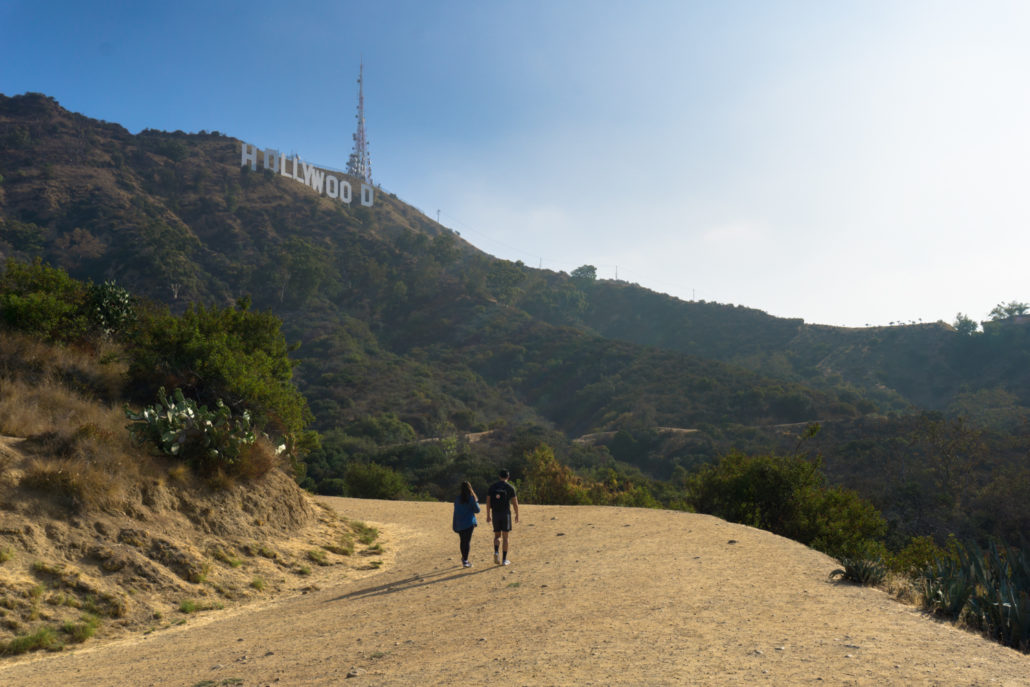 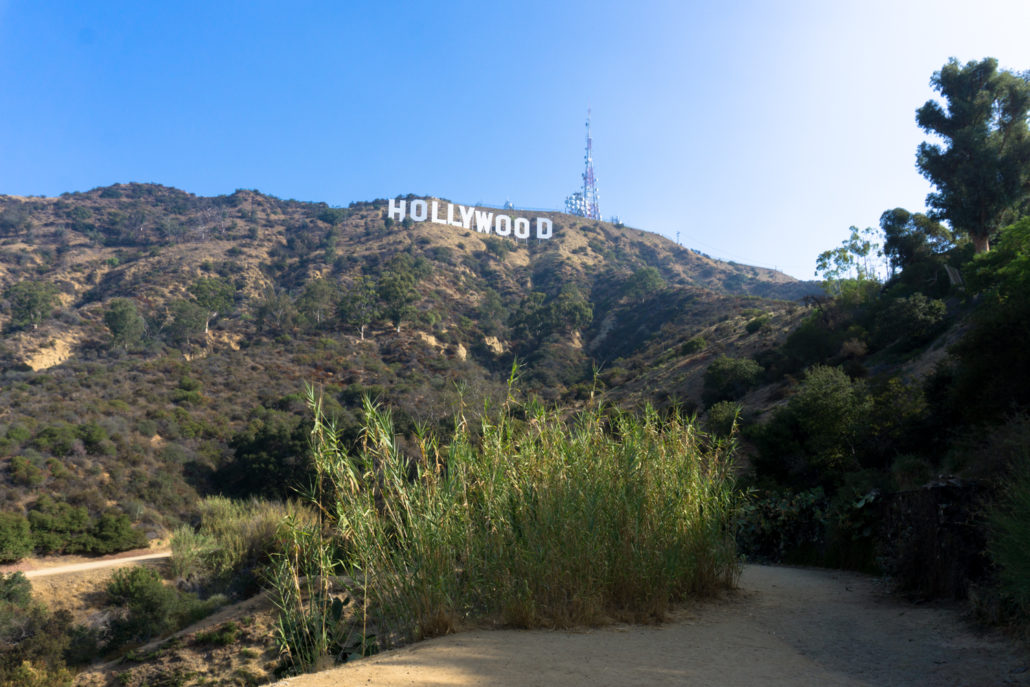 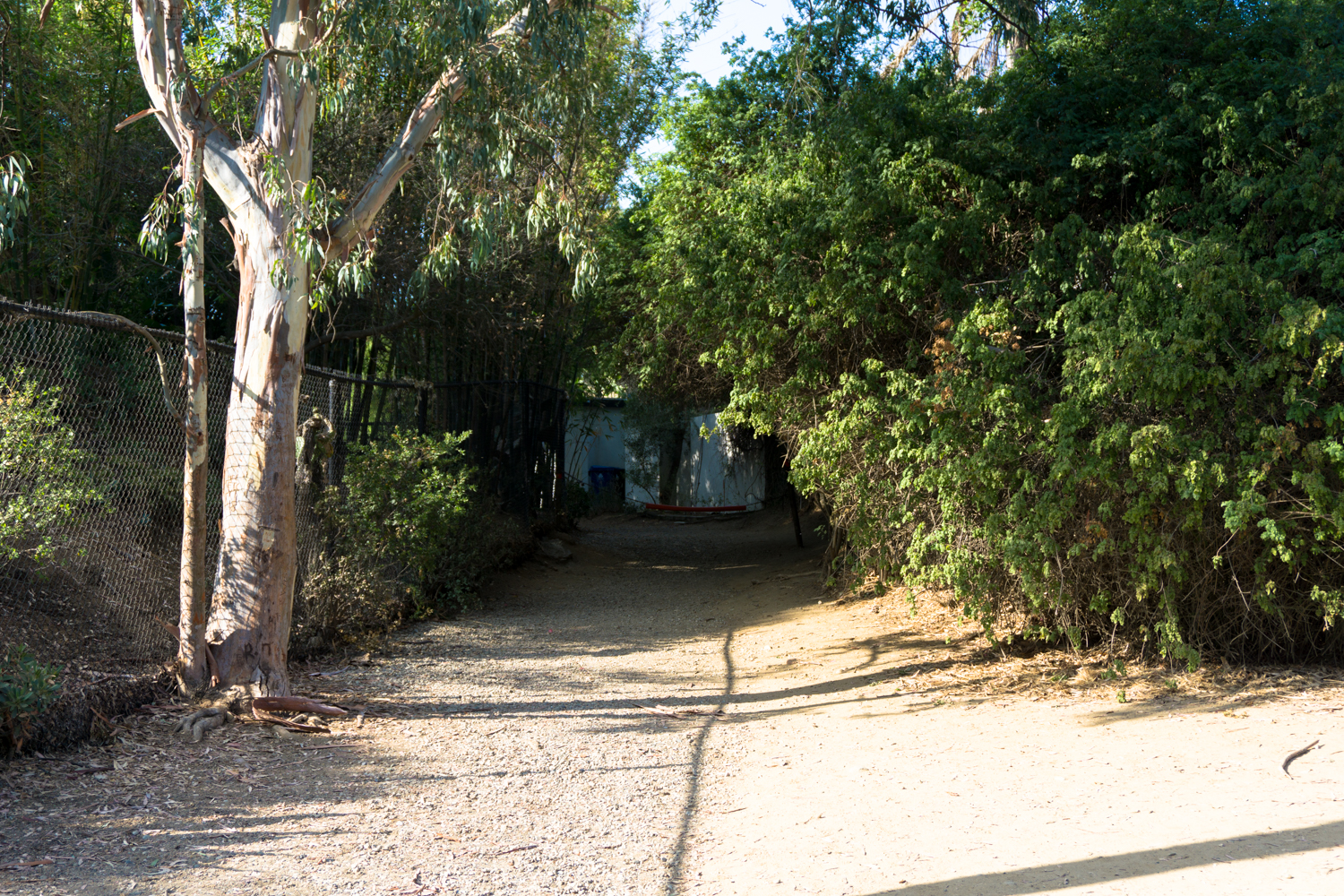 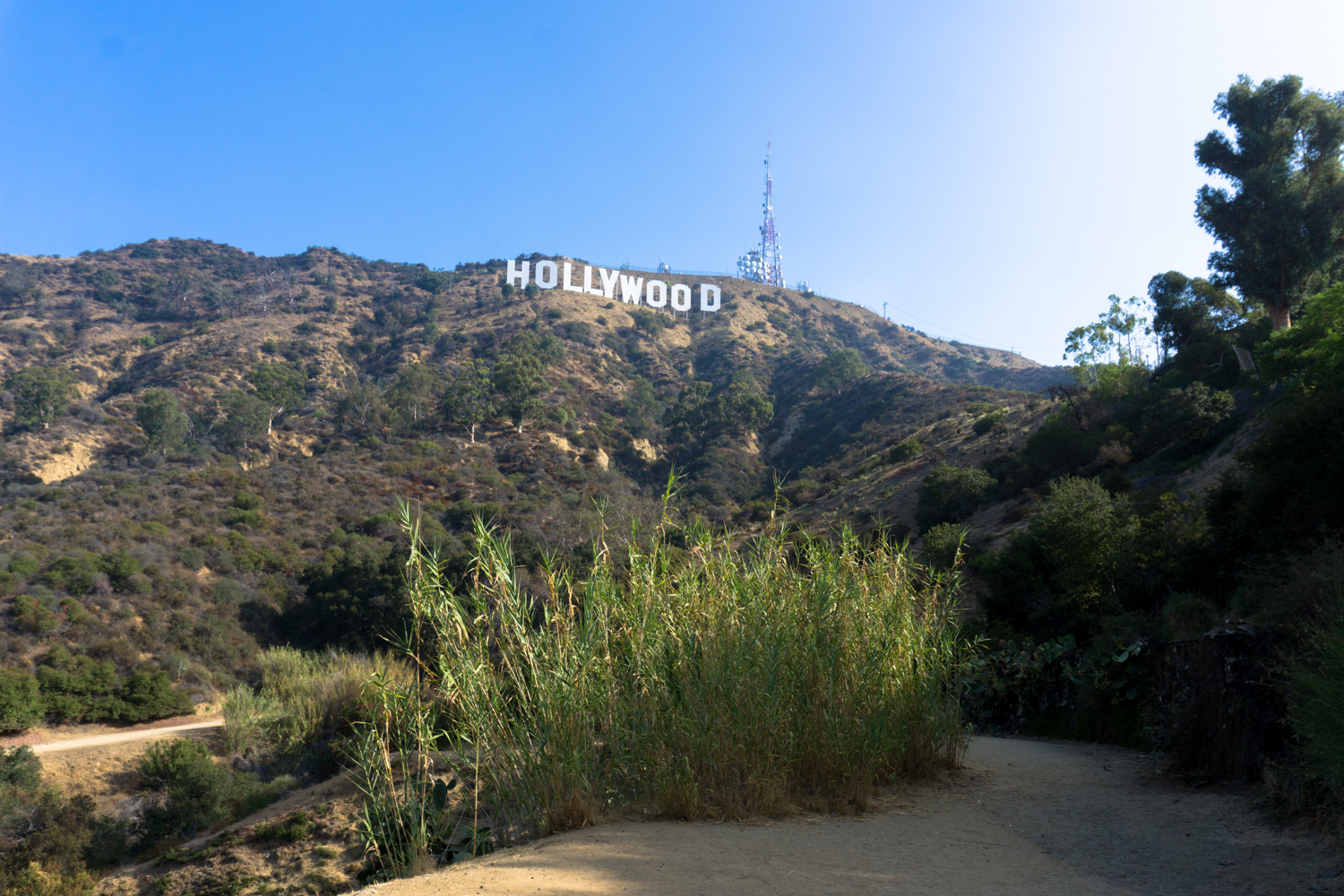 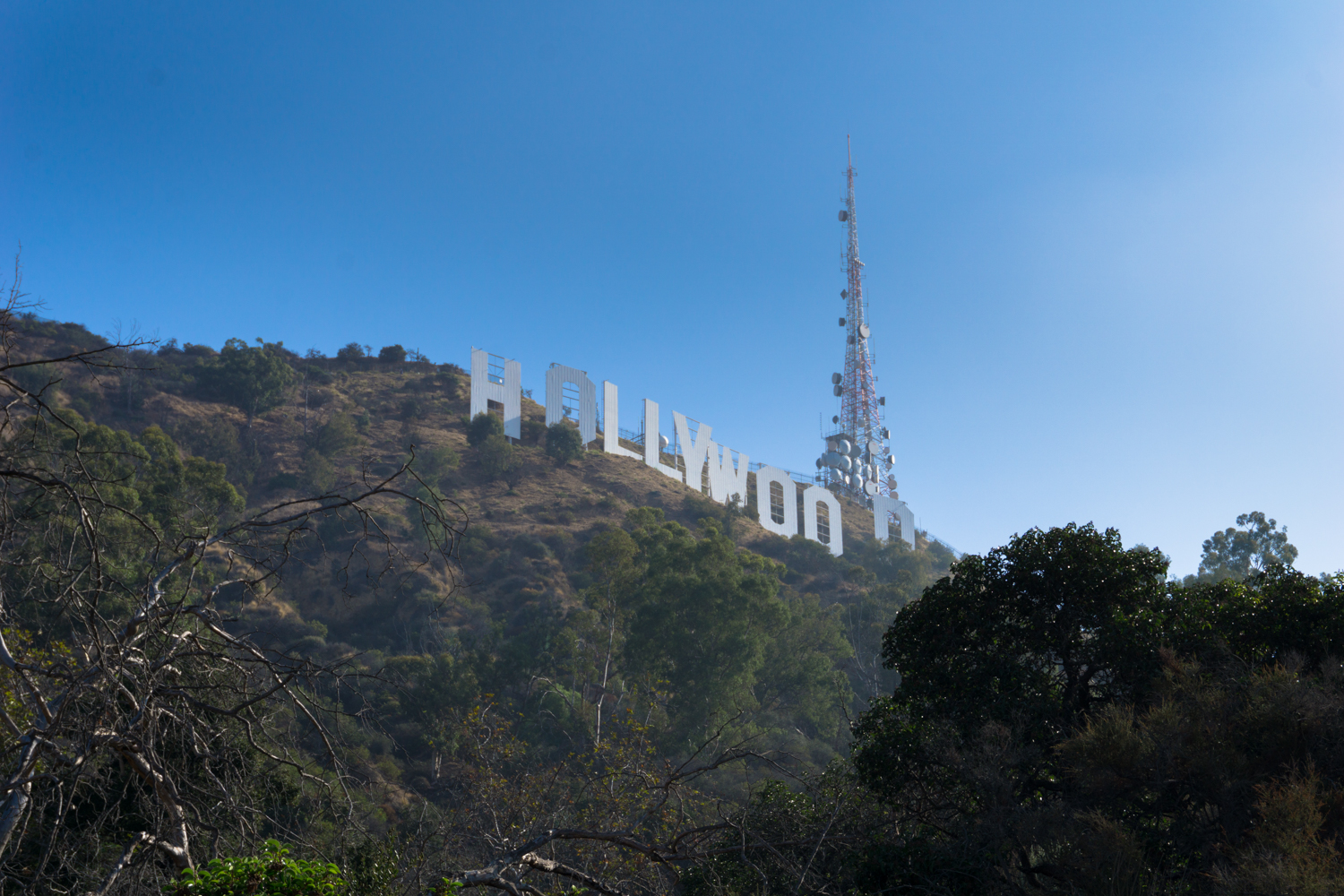 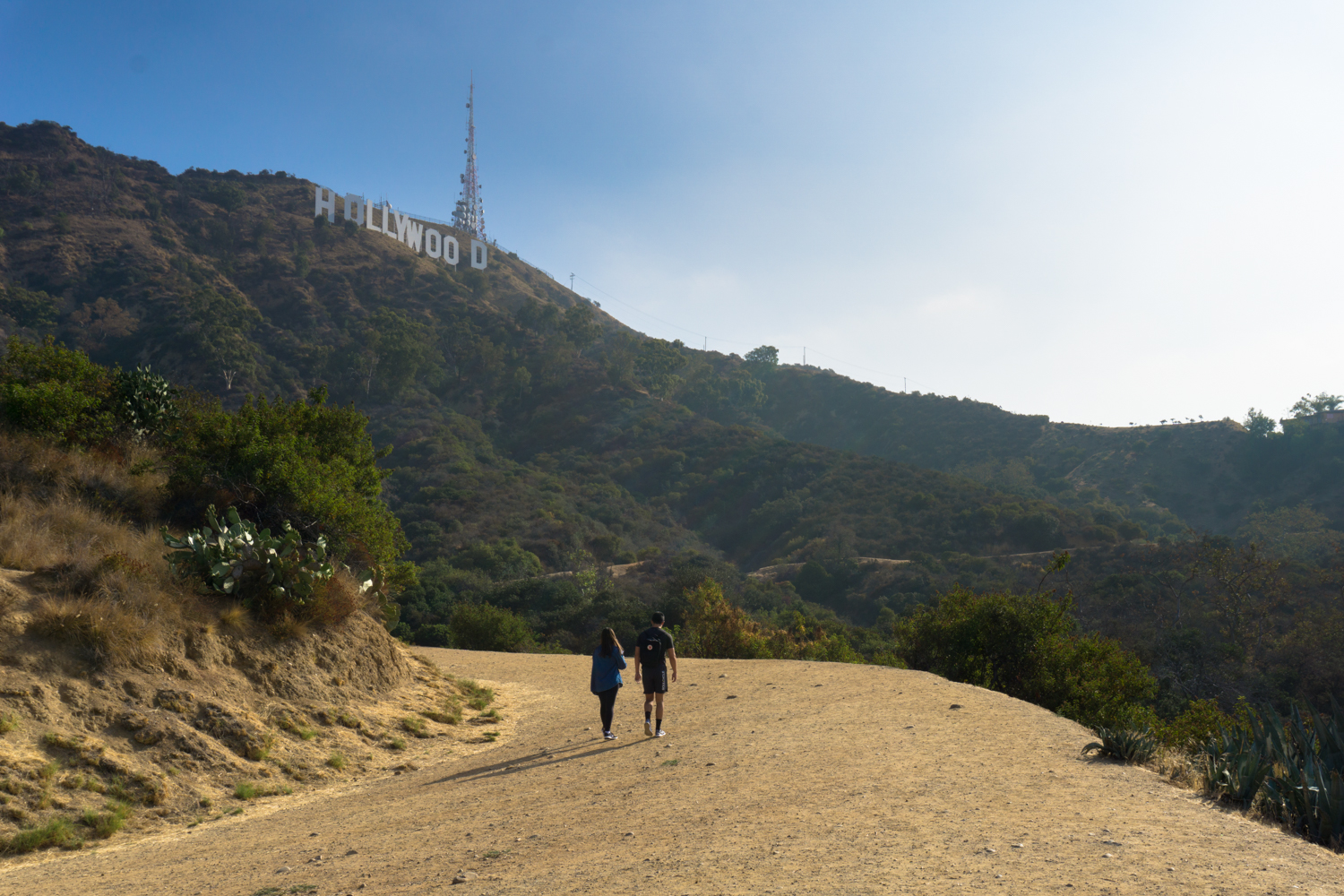 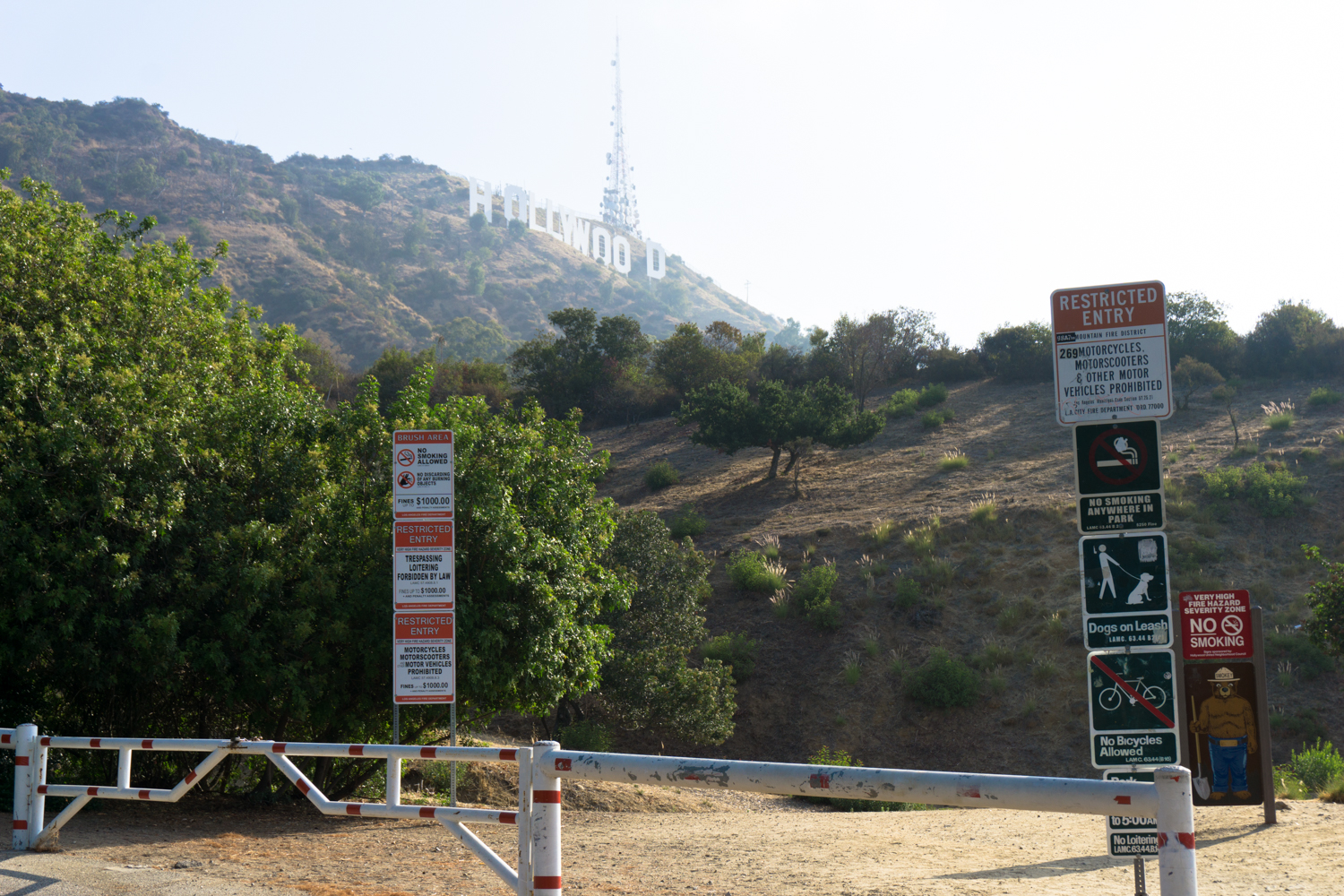 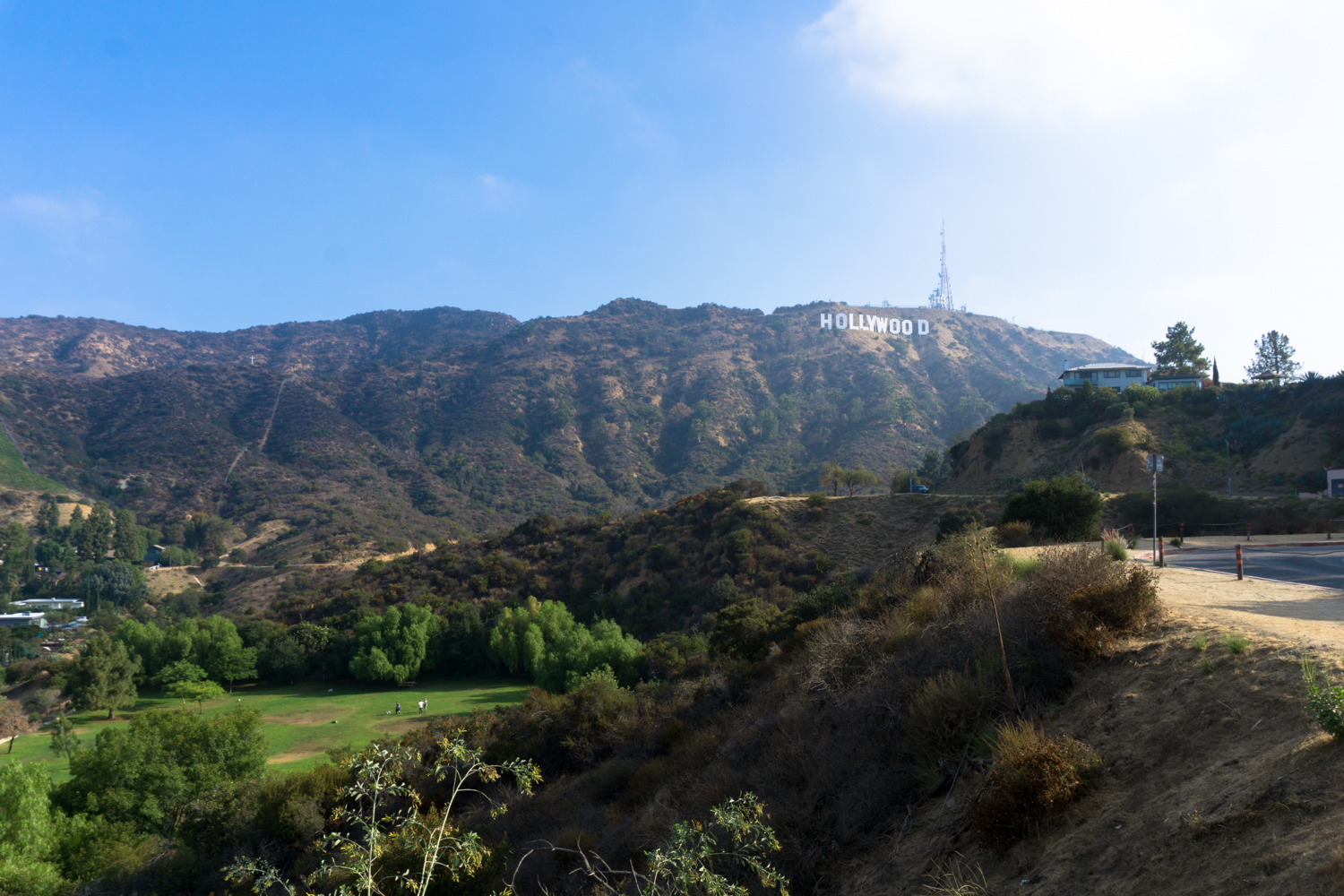 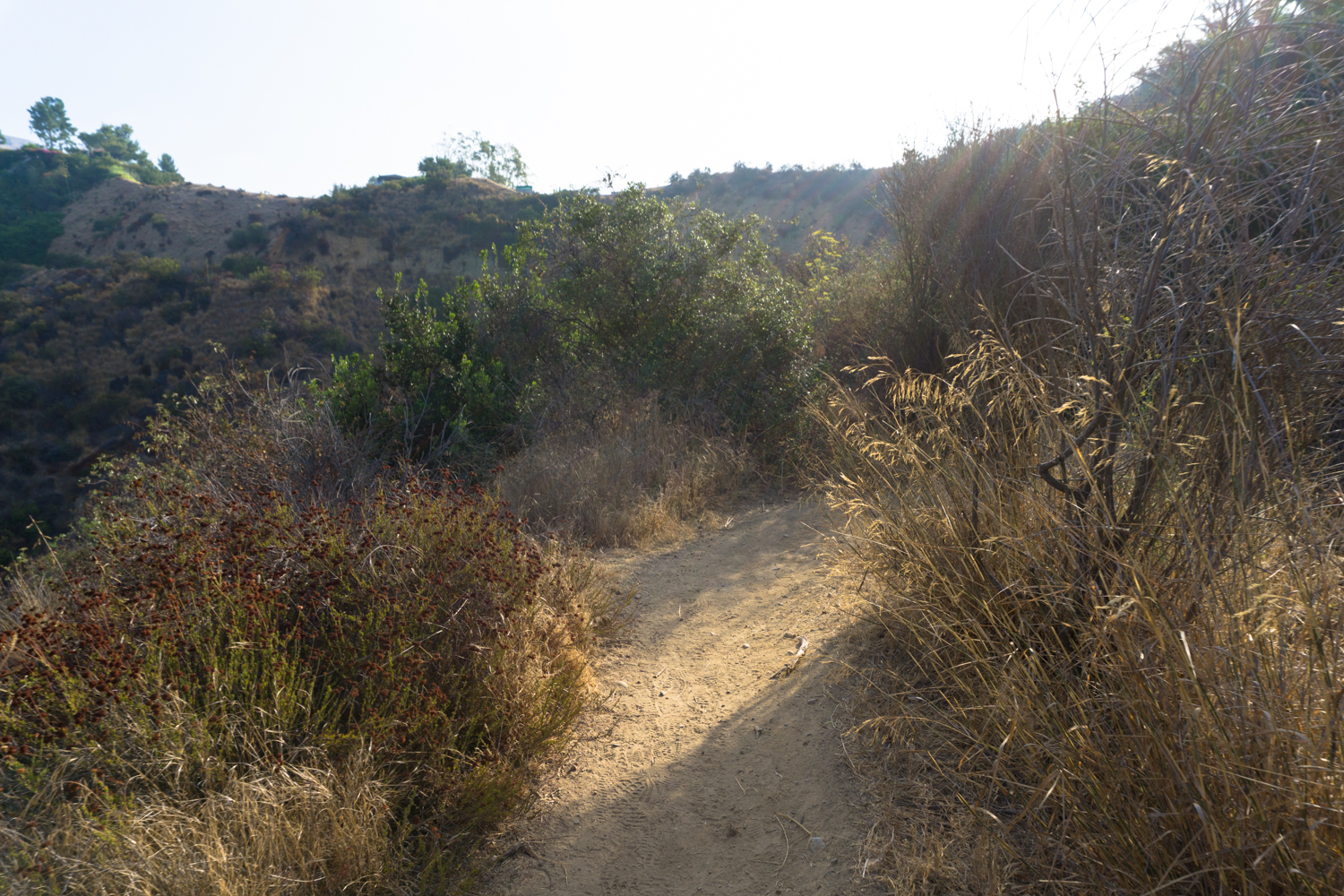 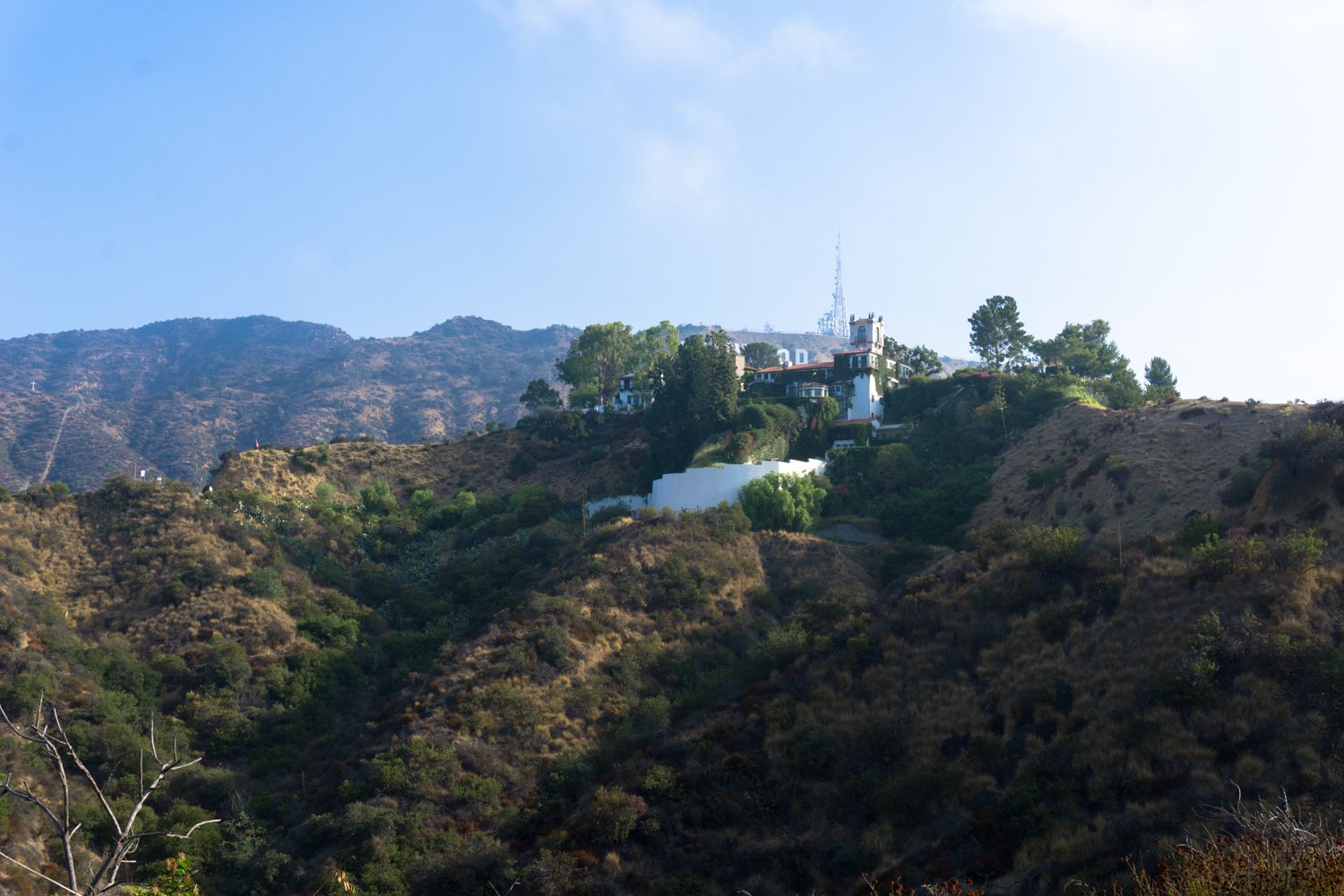 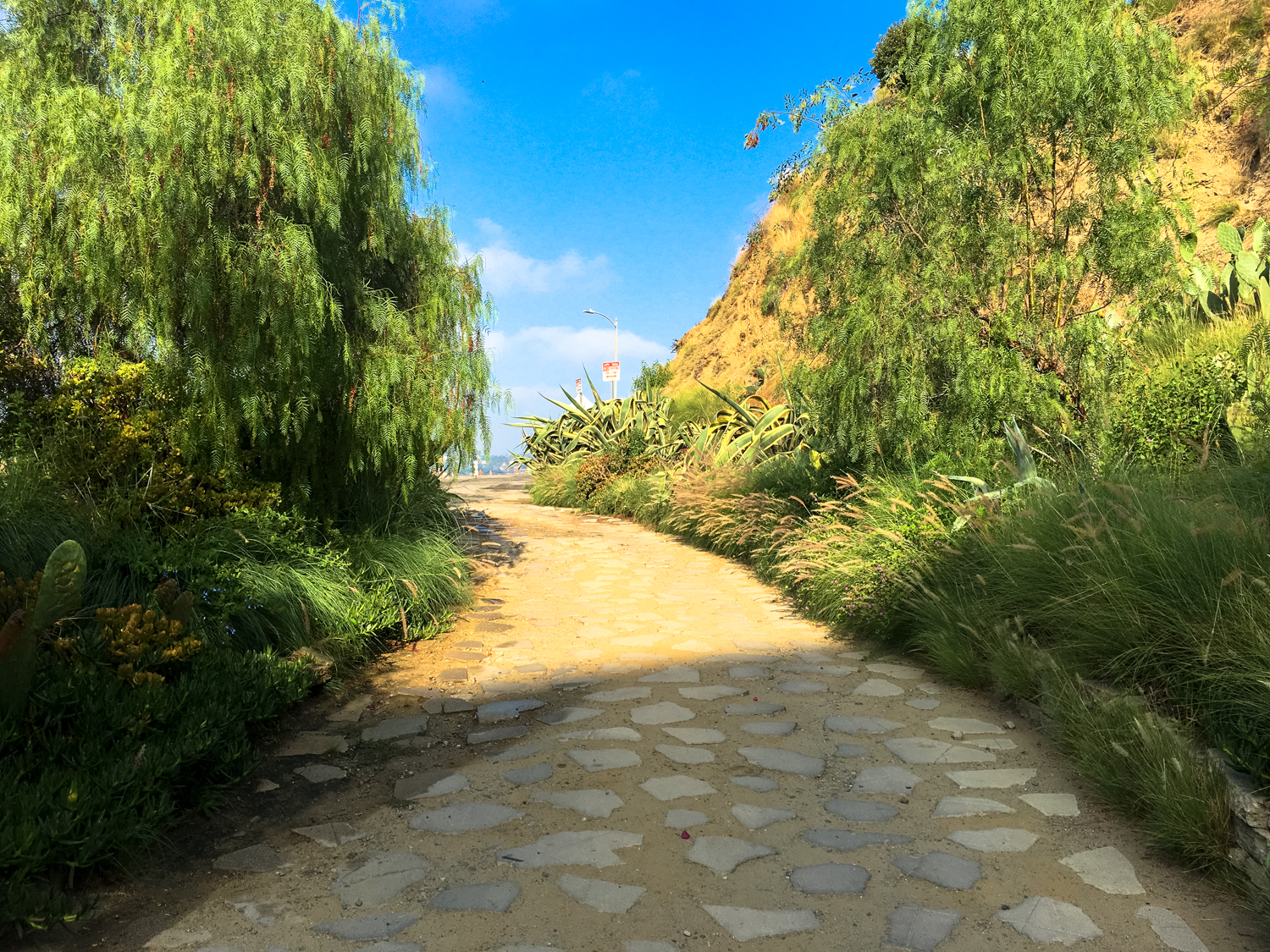 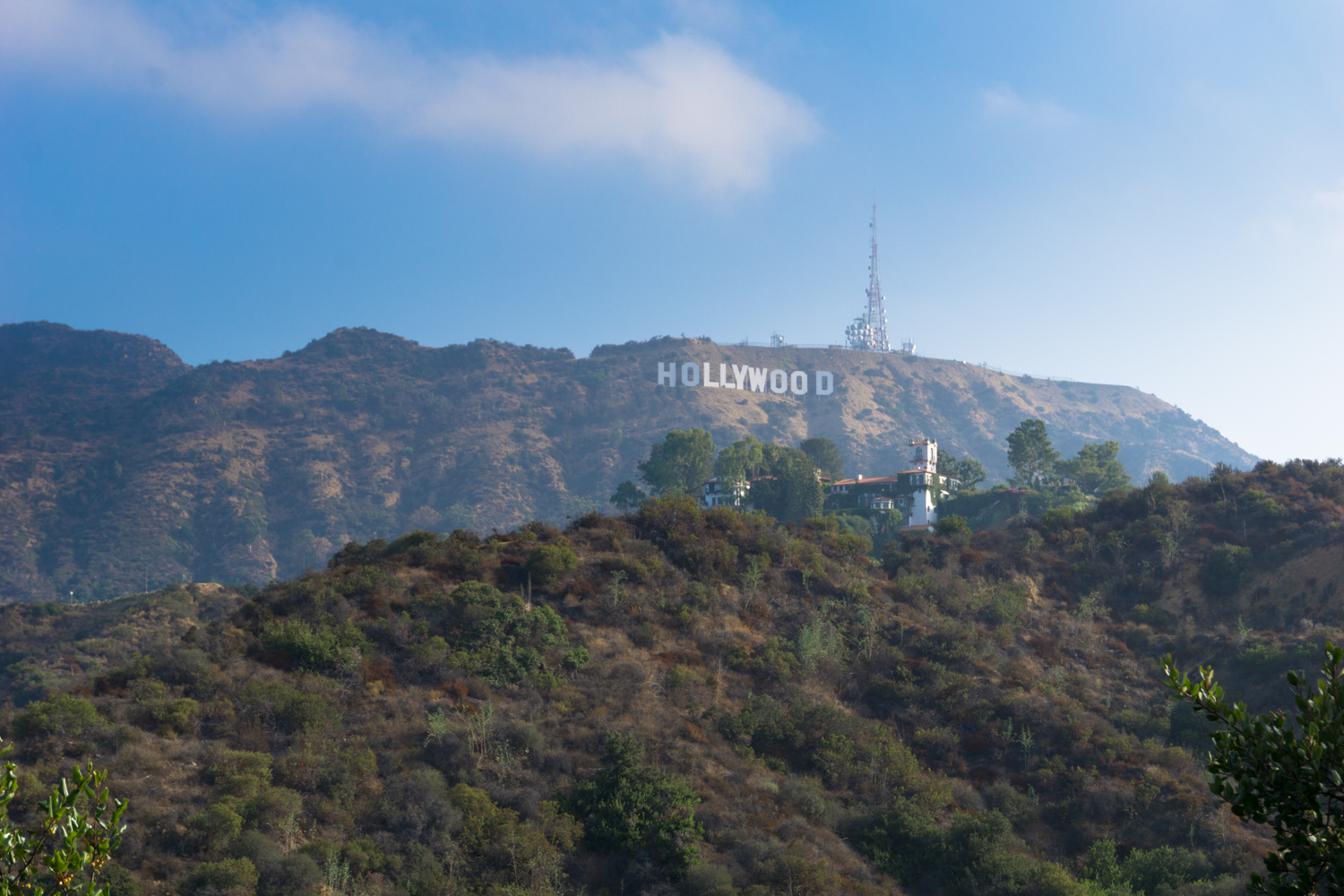 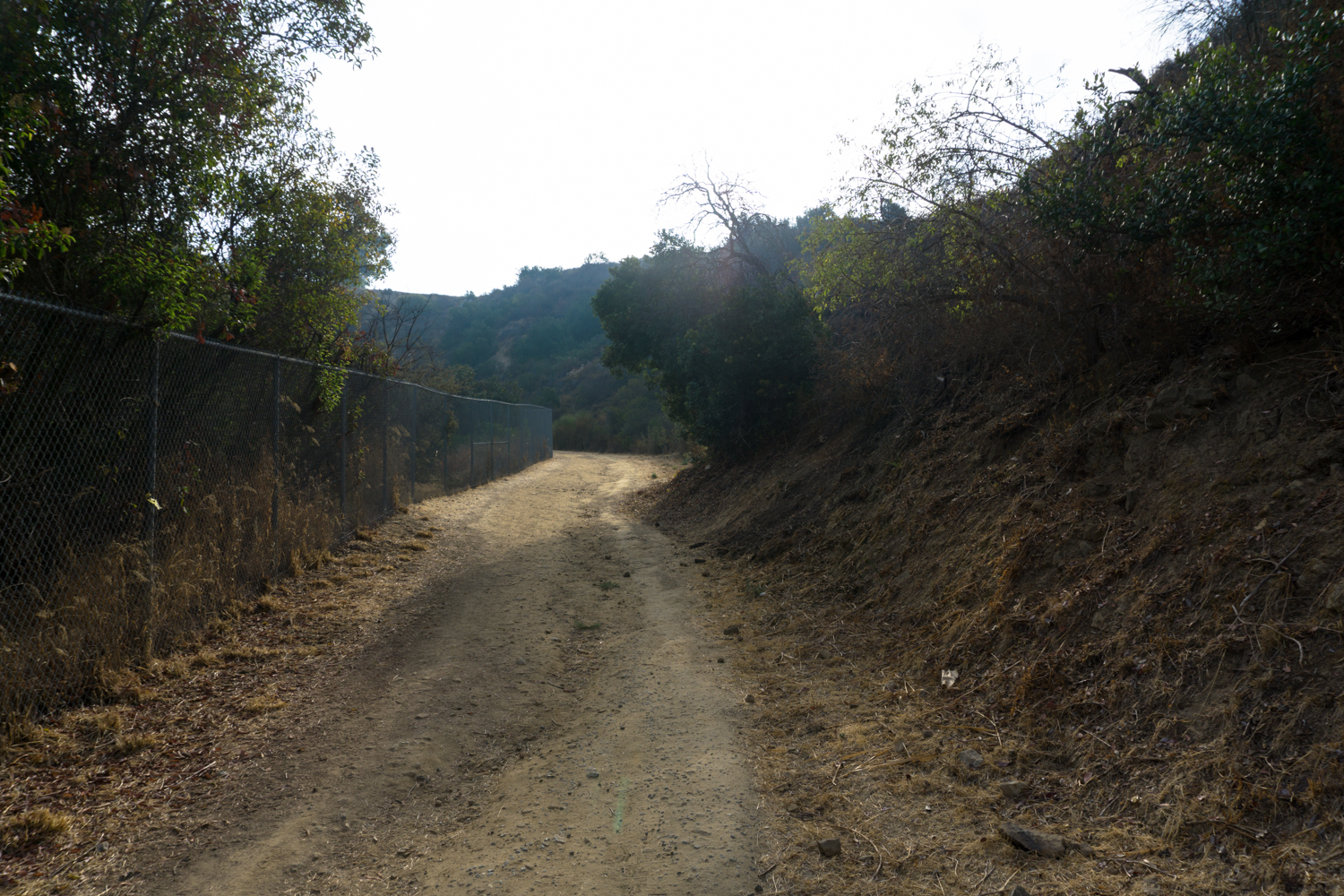 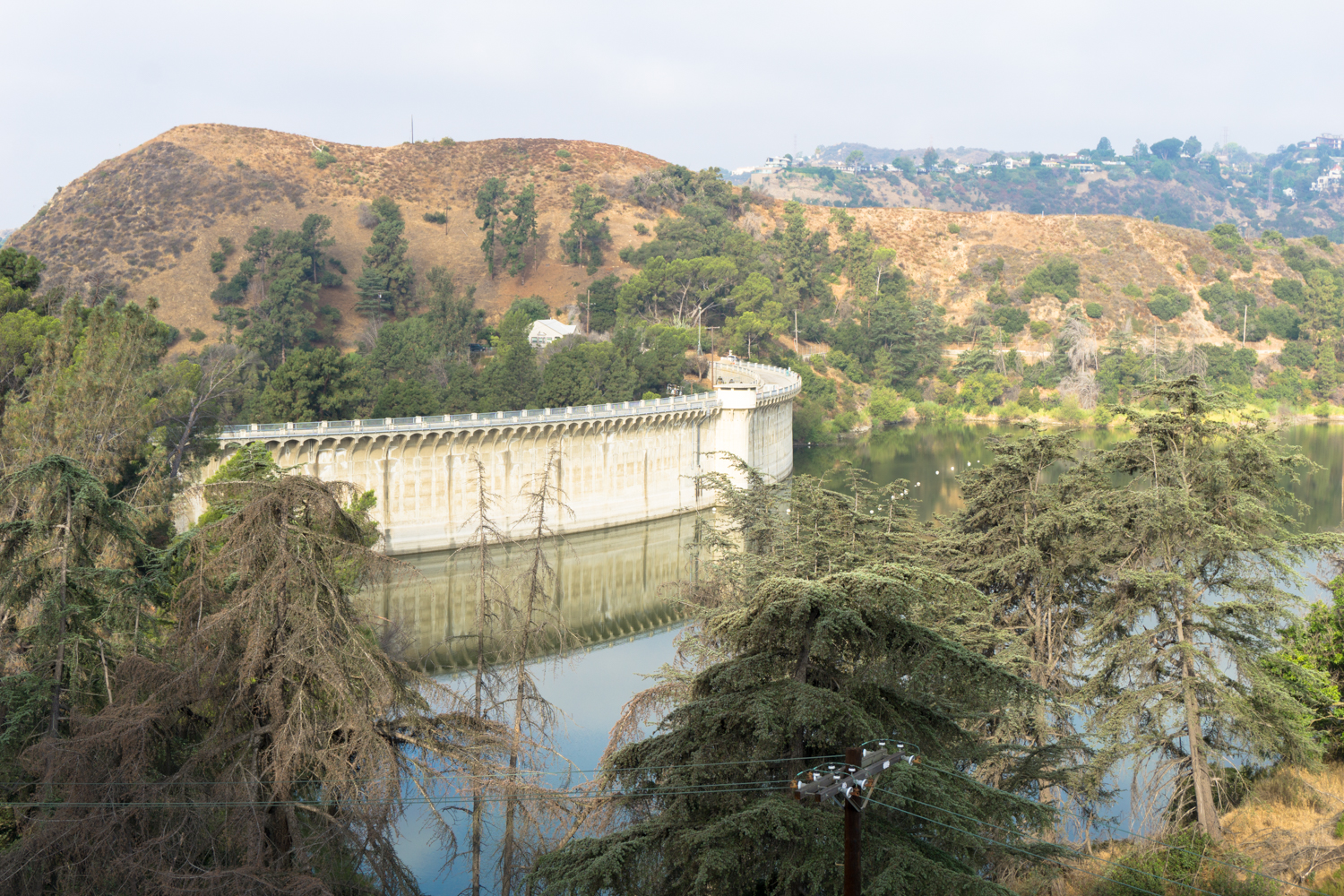 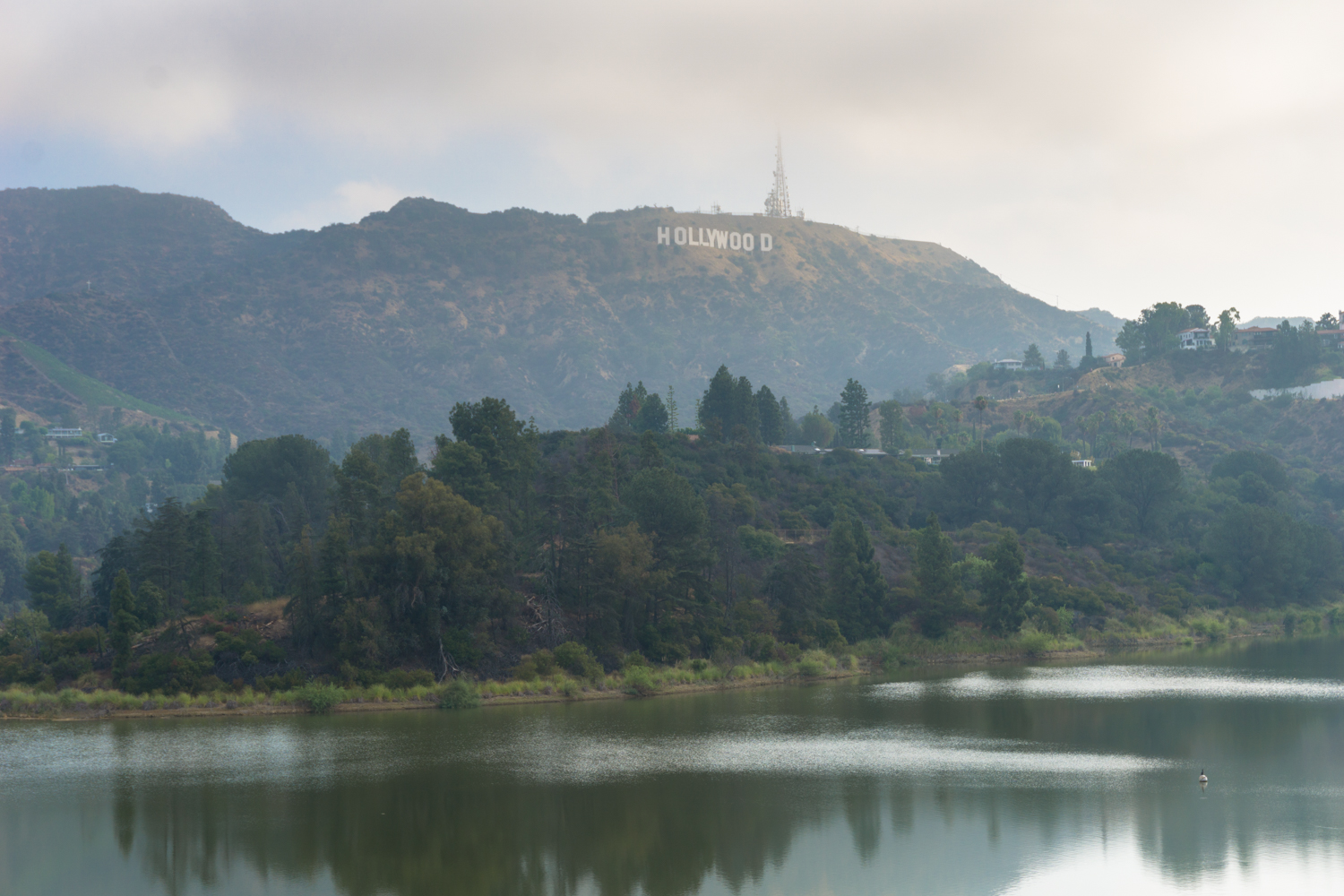 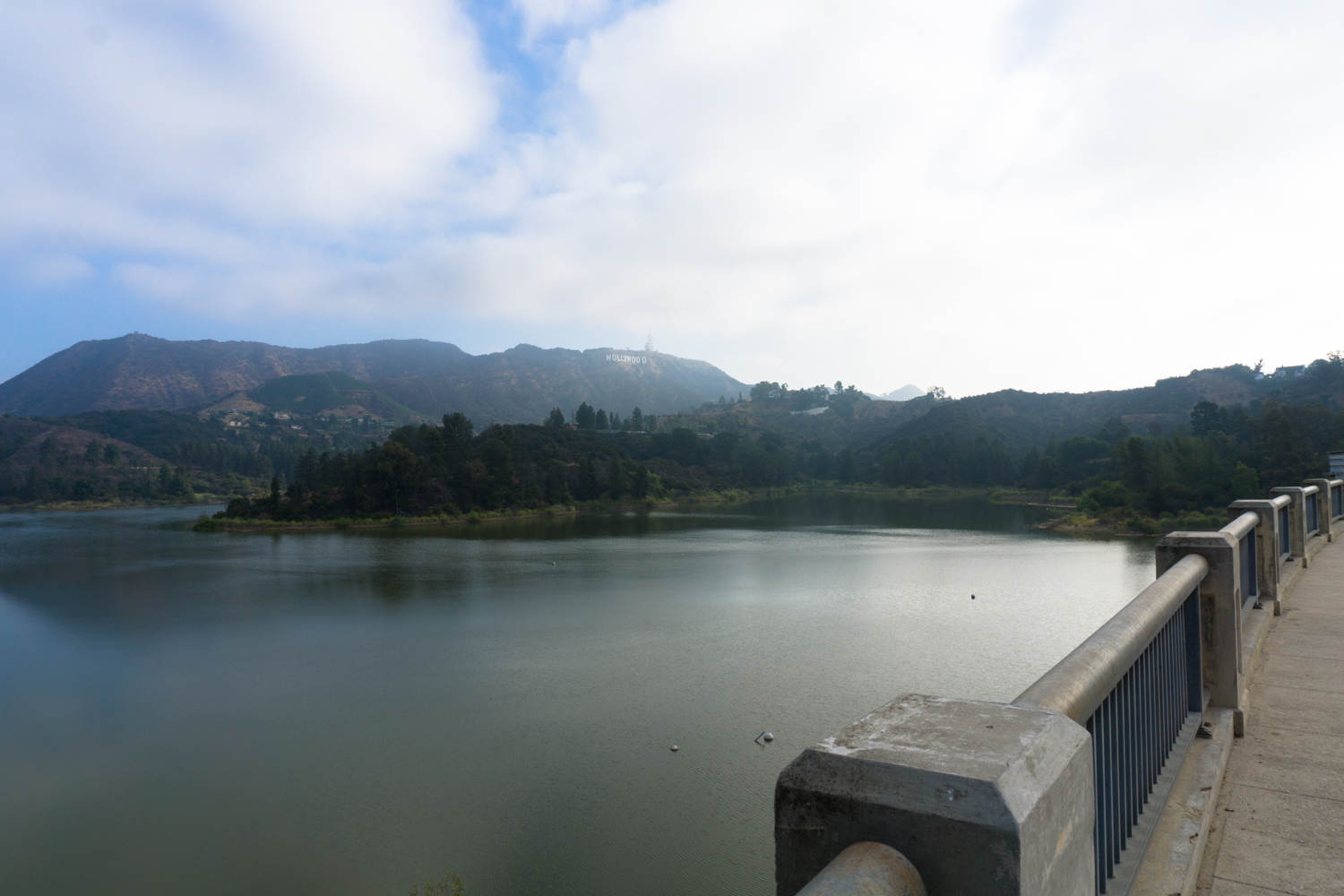 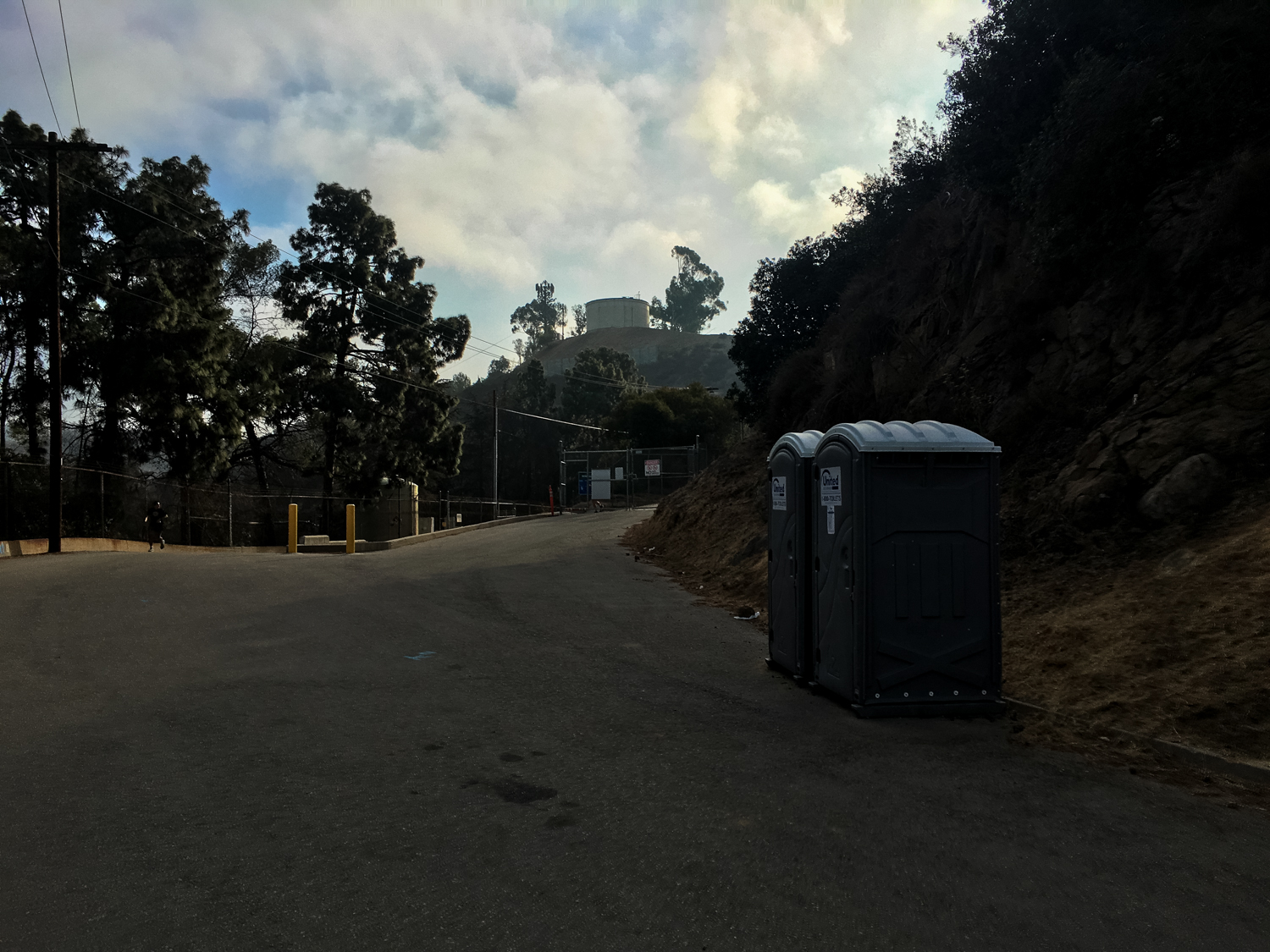 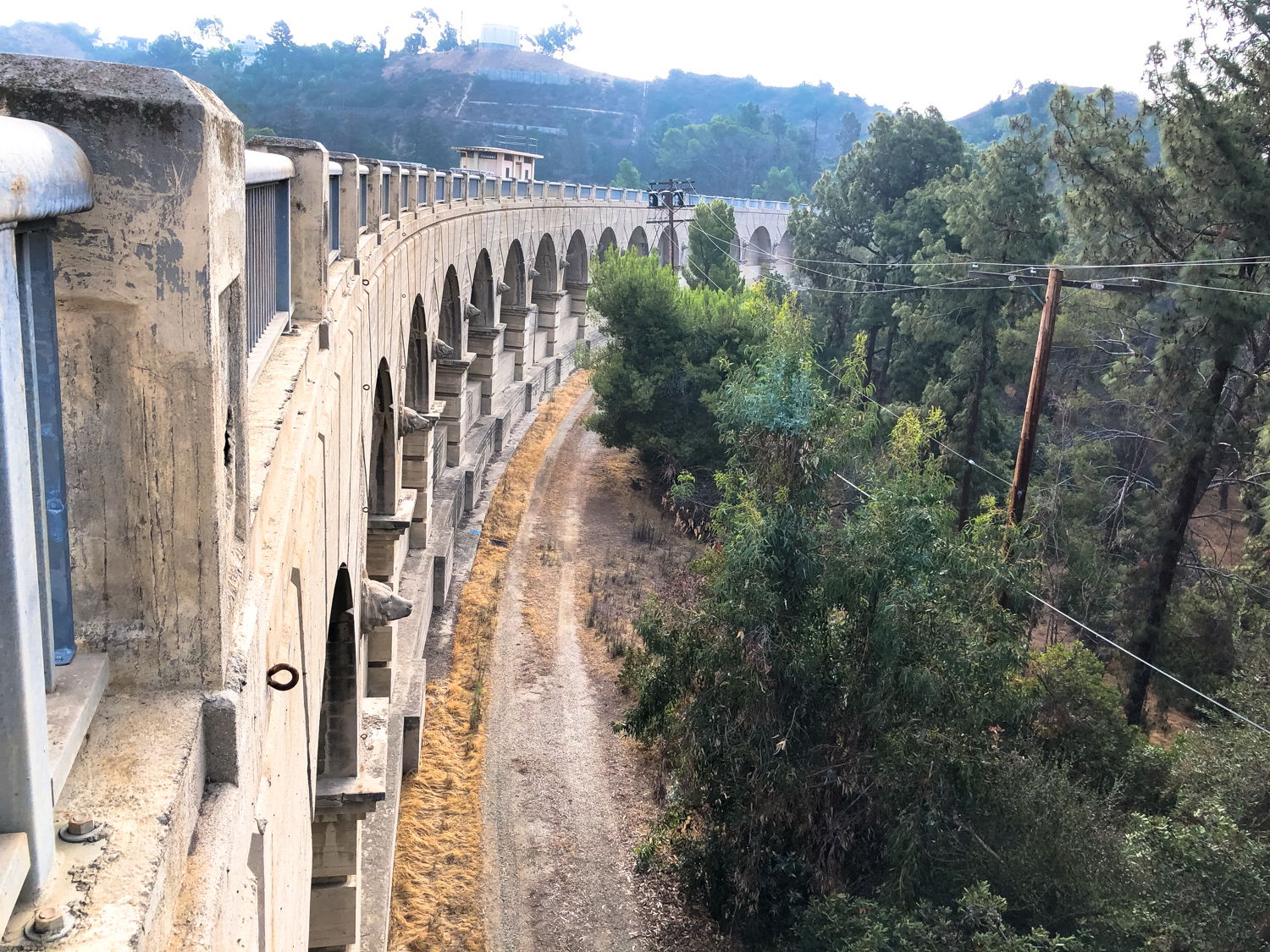 Trail condition is generally good here, but you'll be on a variety of trails - paved, old road grades, dirt paths, and bridle trails - some of which are not signed.

This route begins at the northern entrance to the Hollywood Reservoir, which is at the bottom of a decline at Lake Hollywood Drive, south of Wonder View Drive. There are parking restrictions in many neighborhoods nearby and NO PARKING past the Lake Hollywood Park. DO NOT DRIVE INTO THE RESIDENTIAL NEIGHBORHOOD PAST LAKE HOLLYWOOD PARK.