In simpler times, the Hollyridge Trail used to be the easiest, fastest way to get a solid front-facing photo of the Hollywood Sign and continue on your merry way. Tourists would walk past a city-funded gate past the Sunset Ranch, where locals and tourists alike could enjoy beautiful guided horseback tours of Griffith Park on its extensive bridle trails.

Those simple times ended. GPS and Google Maps sent people searching for “Hollywood Sign” to the end of Beachwood Drive, where the narrow circa-1920s streets were overwhelmed by throngs of people looking to take selfies with the Sign with the least amount of effort. The lack of public transit or a decent trailhead parking area didn’t help. Lawsuits were filed. Google Maps and Garmin were asked by a City Councilman to change their directions. Gates were locked. Dubiously “official” security guards were hired. And now that gate to the Hollyridge Trail at the top of Beachwood Drive is off-limits to pedestrian access until further notice.

Lawyer-types looking at a map (but who perhaps had little experience on foot in this part of Southern California) looked at the nearby established trailhead at the end of Canyon Drive and said, “hey, this one’s about 1300 feet away, let’s just send people there instead!” And thus, a 0.6-ish mile out-and-back instantly increased nearly seven-fold in distance.

That doesn’t mean you can’t still get to that viewpoint — it just means now you have to hike.

This hike now begins at the end of Canyon Drive in Brush Canyon, more commonly known as Bronson Canyon. If you’re looking to get to the top of Mount Lee and a backside view of the Hollywood Sign, this is also where you can take a moderately long but overall fairly easy route to the summit. You can also take a very short side trip here to the nearby Bronson Caves — the site of a former quarry and mine that is much better known as the site of a whole lot of outdoor shots from film and television, perhaps most famously as the site of the original television Batcave from Batman. It’s a short and easy trail that also provides a nice view of the Hollywood Sign in its own right, and is worth tacking on to this or adding to your trip to the summit of Mount Lee as well.

For this trek to the Hollyridge Trail, though, you’ll want to head north onto the Brush Canyon Trail. 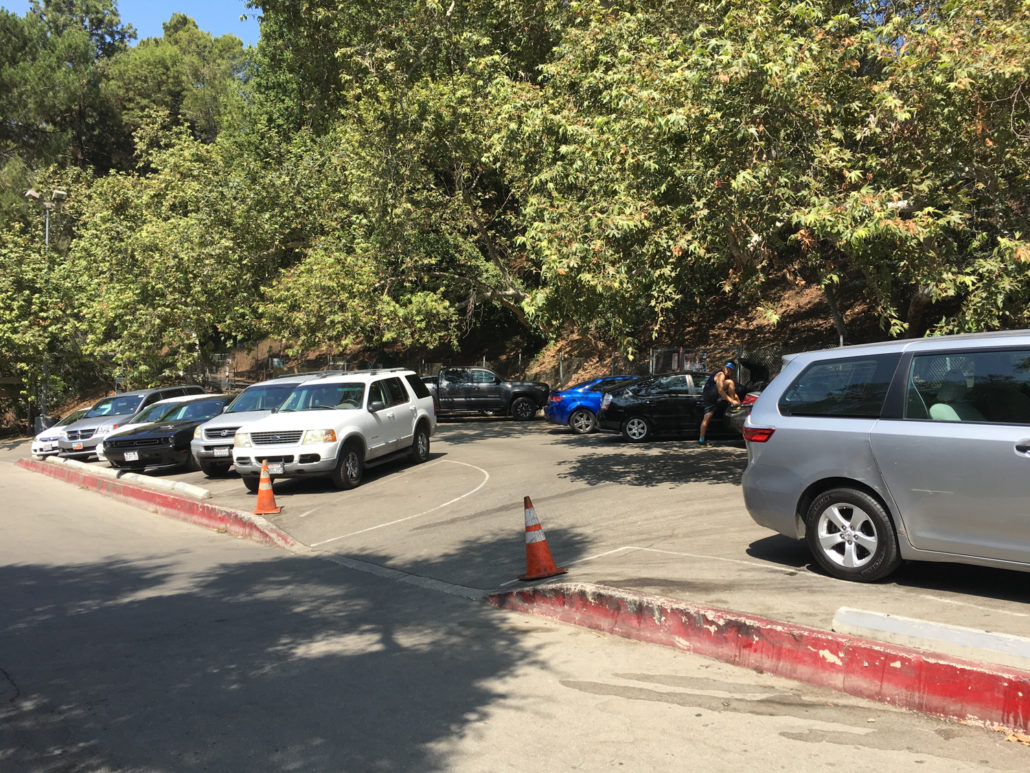 There’s a small trailhead parking area right before the trail starts, as well as some additional street parking further down Canyon Drive near some picnic areas and playgrounds. Do note that rangers close access gates for both pedestrians AND cars at sunset. Cars caught inside will be ticketed AND be stuck there until morning, so plan your hike accordingly. 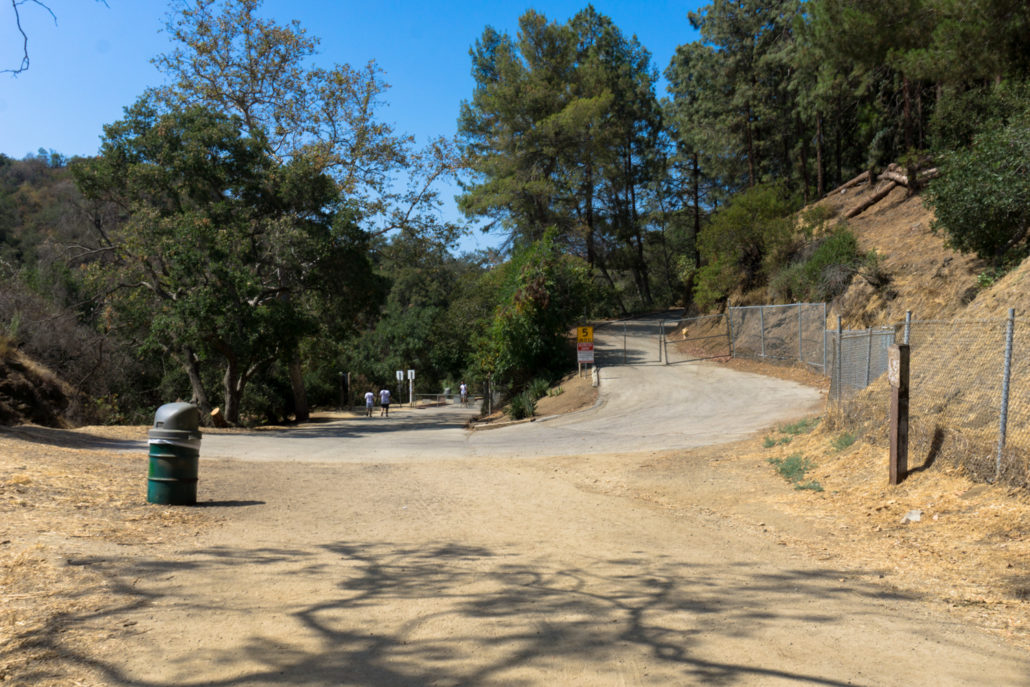 Leave the pavement as the dirt road continues north into Brush Canyon. In about 0.3 mile, you’ll start entering a small riparian area near the bottom of the canyon’s drainage. Note the increased number of sycamores and oaks down here — and relish that small amount of shade, because it’s pretty much all you’re getting on this hike. 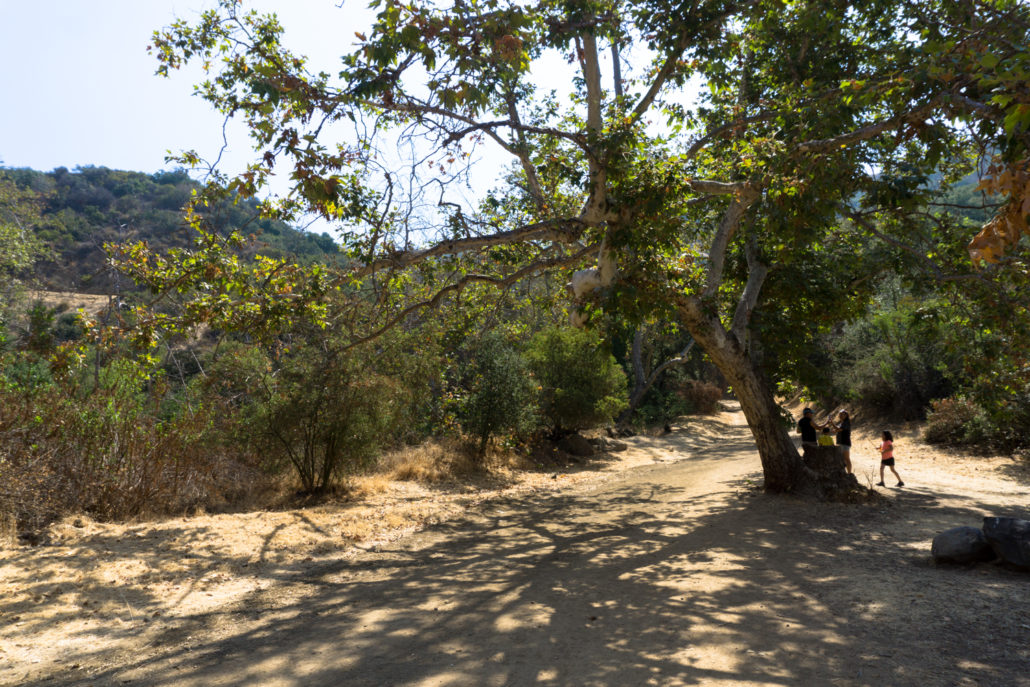 After this, the trail picks up its incline and doesn’t quit until it reaches the Mulholland Trail. Again, there’s a bench about 3/4 of the way up, but unless you’ve timed this hike to be in the early morning hours, you’re going to be in full sun the entire time. It’s definitely doable during the summer, just try to go early or late and don’t forget to bring lots of water! 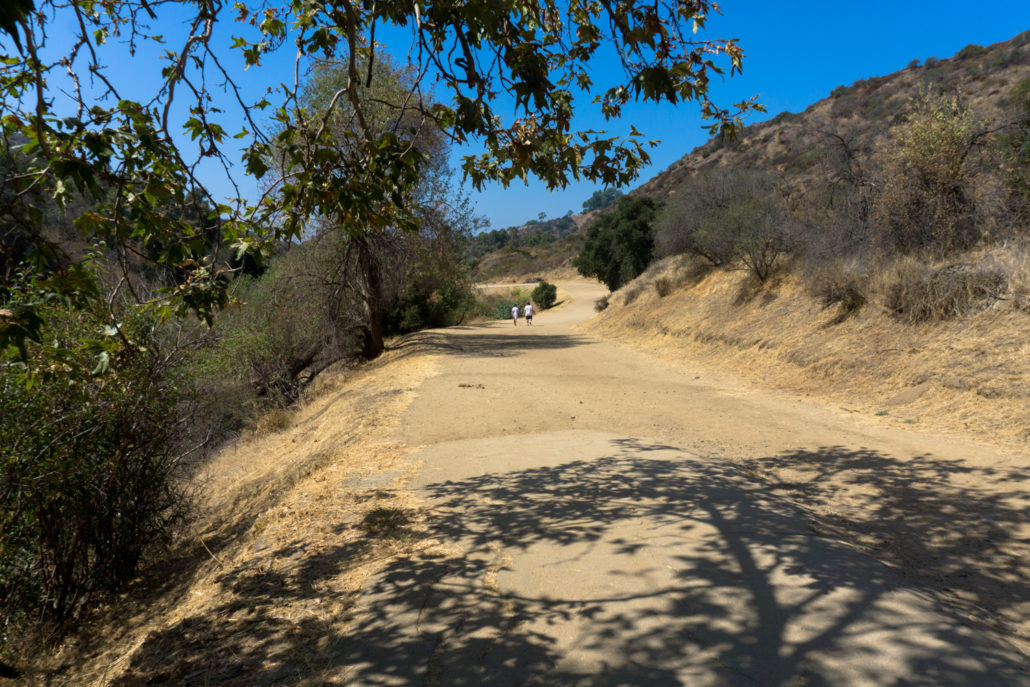 This route shares a name with the nearby paved Mulholland Drive / Mulholland Highway, and before this stretch of land was incorporated into Griffith Park there were plans to connect a fully paved thoroughfare to the road running through the Hollywood Hills west of Cahuenga Pass. Before road pavers could get to the road, though, they were blocked by residential developments in Cahuenga Pass and left the road grade as a dirt bridle path instead — perhaps marking the one and only time sprawling development in Los Angeles actually benefited L.A.’s parks and open spaces. 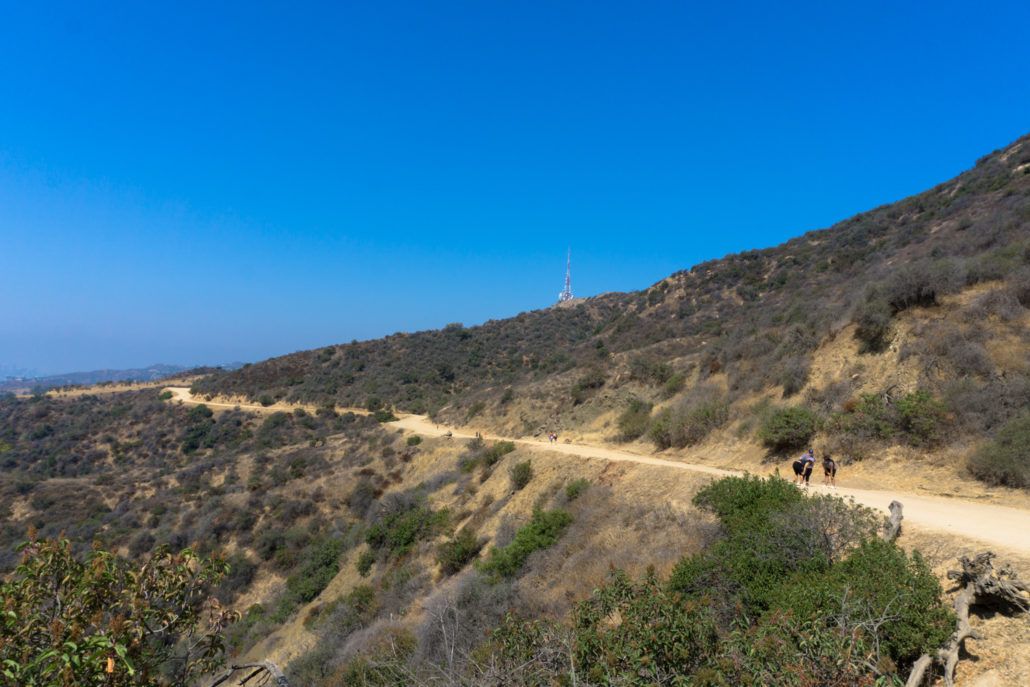 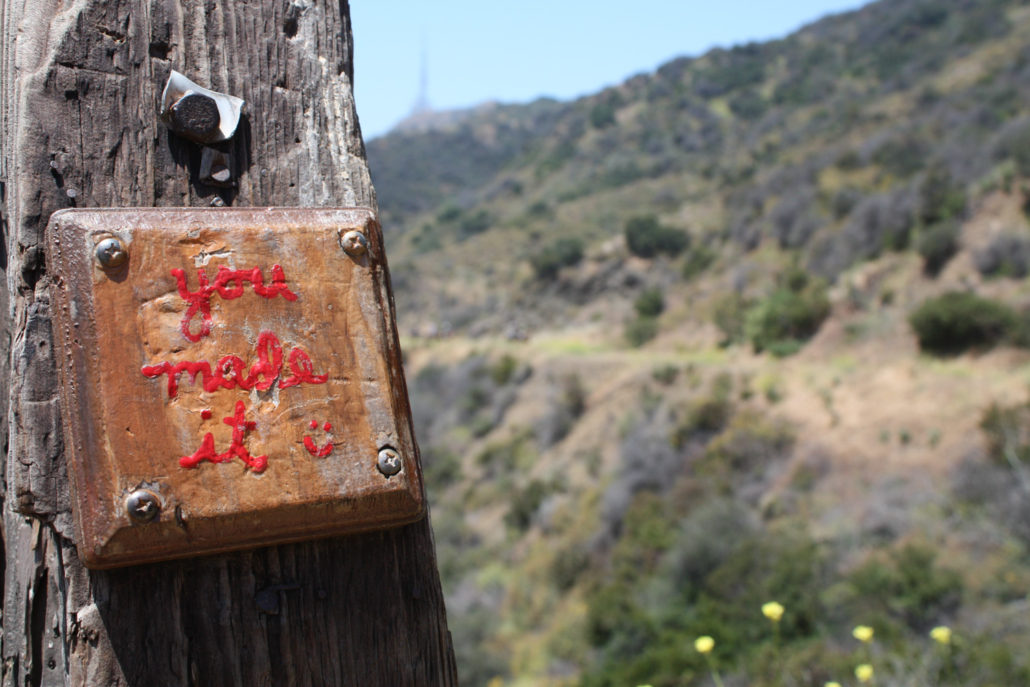 Continue west on the Mulholland Trail, where you’re likely to pass a group of equestrians or two coming up from Sunset Ranch. At 1.7 miles, keep left to start a slight descent on the Hollyridge Trail. If you’re in the mood to also visit the Tyrolean Tank viewpoint, stay to the right for 0.3 mile, then keep left on Mulholland Trail for another 0.4 mile. 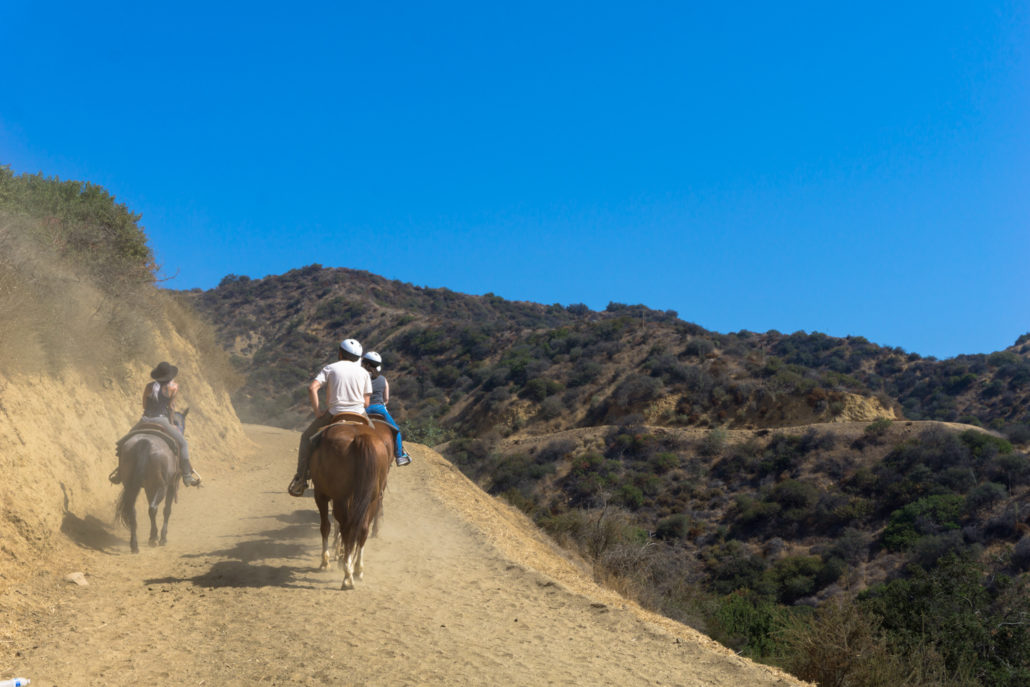 Thankfully, it’s just about 0.3 mile from the junction to the Hollyridge Trail Viewpoint, just above Sunset Ranch: 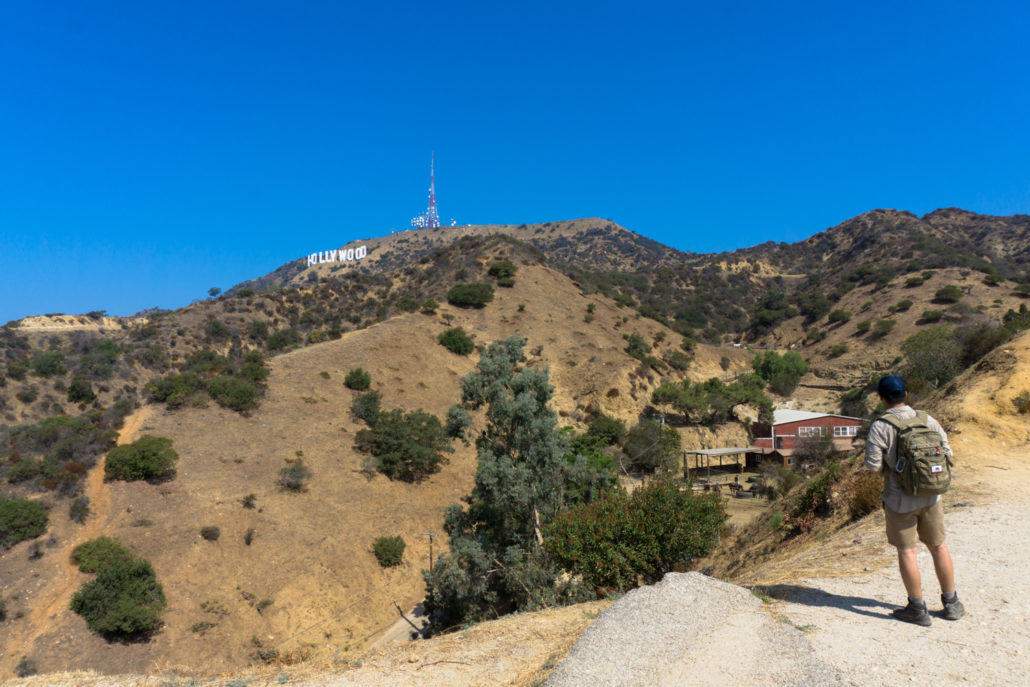 The view of the Hollywood Sign here is actually pretty solid, as far as hikeable viewpoints go — and one small benefit to the Hollyridge Trail being locked off from Beachwood Drive is that when you get here you’ll likely have the whole place to yourself. 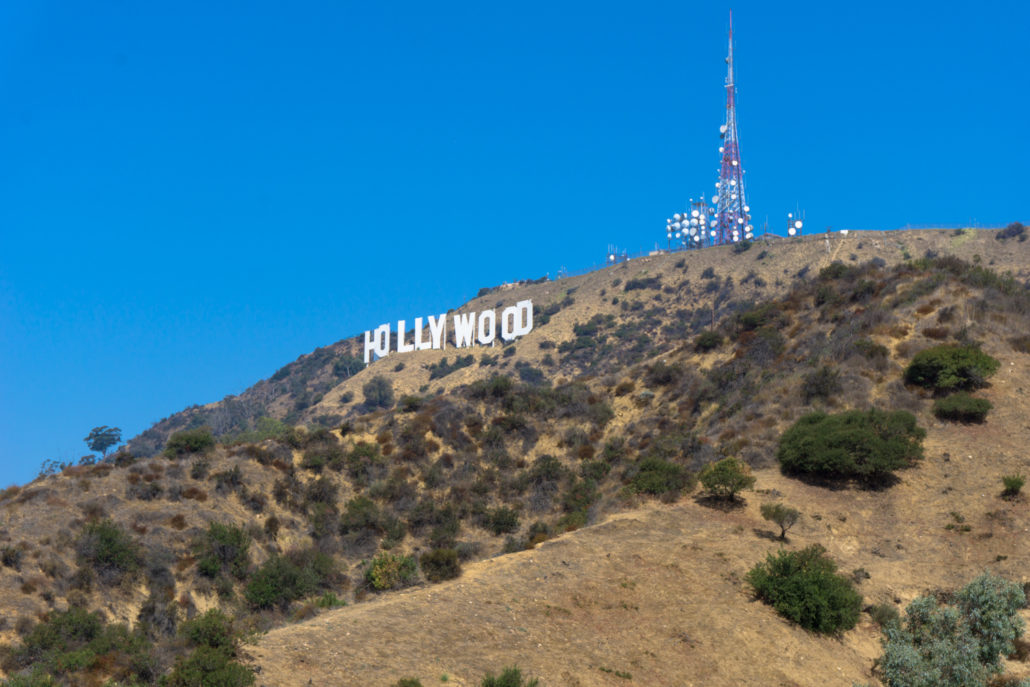 Snap your selfies and head back the way you came in.

For a summit moment, keep left at the junction with the Mulholland Trail and then turn right onto paved Mount Lee Drive, which will take you all the way to the top (adding 2.4 miles of distance and 465 feet of elevation gain round trip). If you’d like alternate front-facing views, at the junction with Mount Lee Drive, keep left and follow the paved path to the Tyrolean Tank Viewpoint (that adds about 0.8 mile of distance and a negligible amount of elevation gain round trip to this hike). And don’t forget to check out the view from Bronson Caves when you’re done!

Accommodations near Hollyridge Trail to the Hollywood Sign Viewpoint 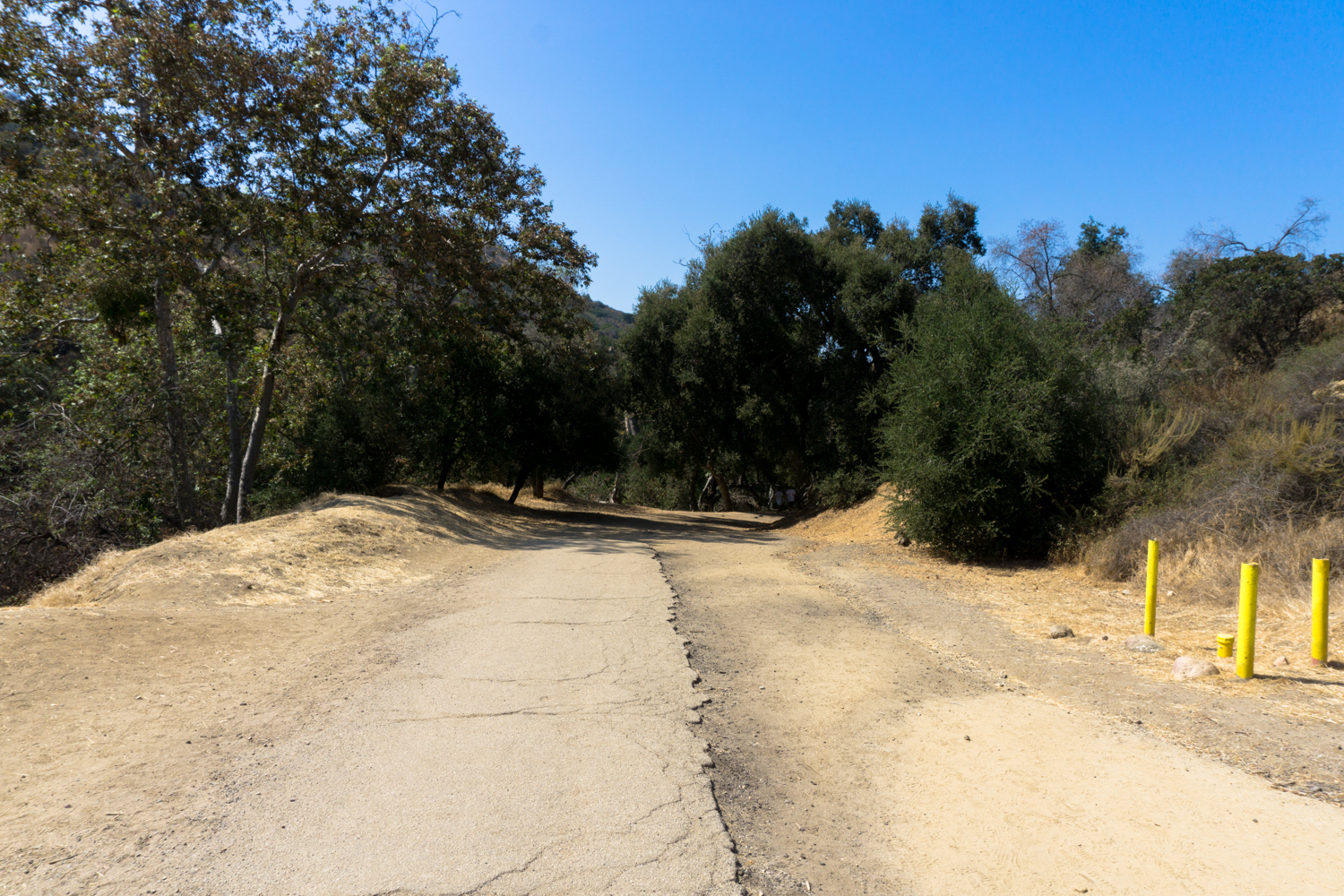 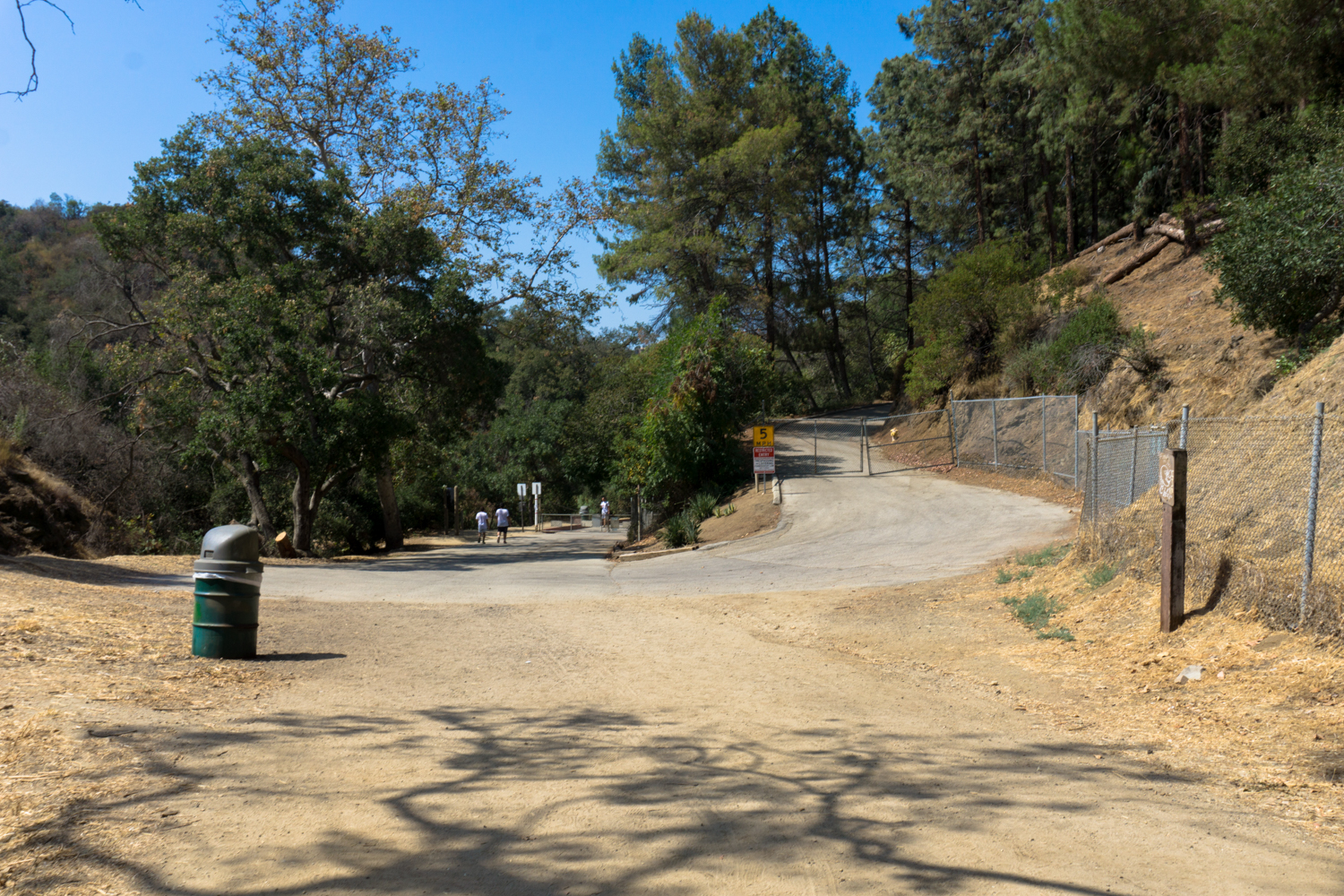 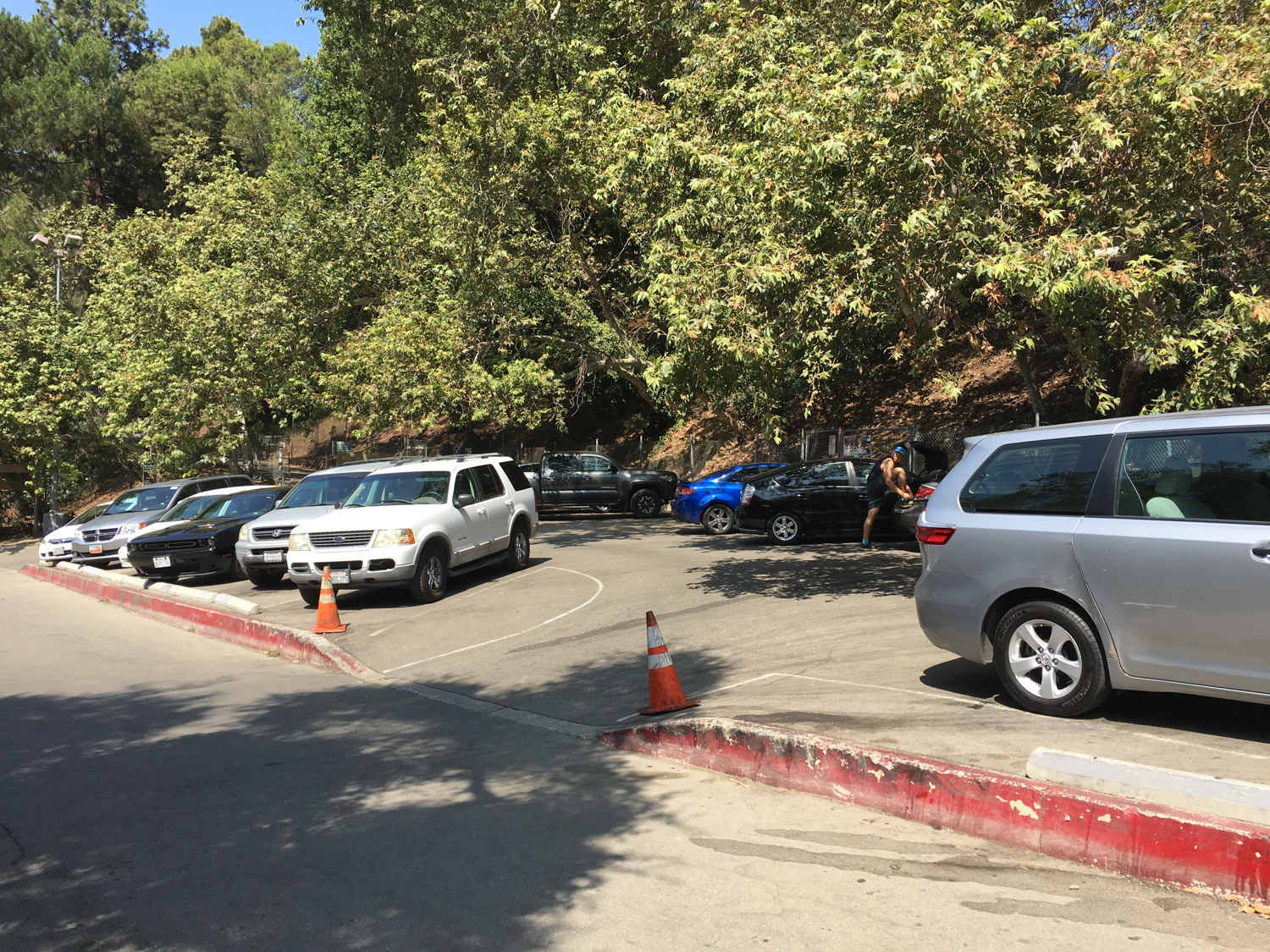 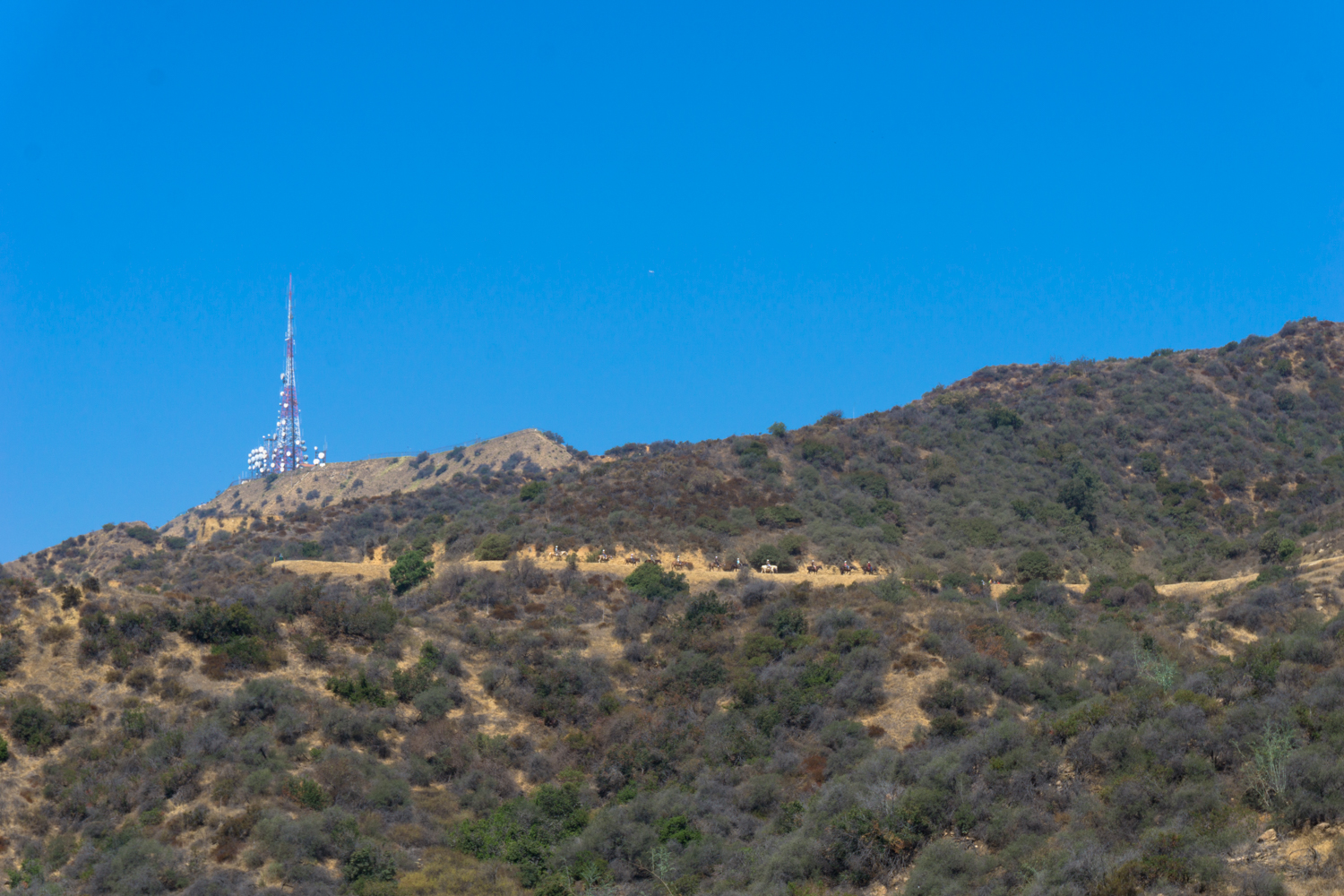 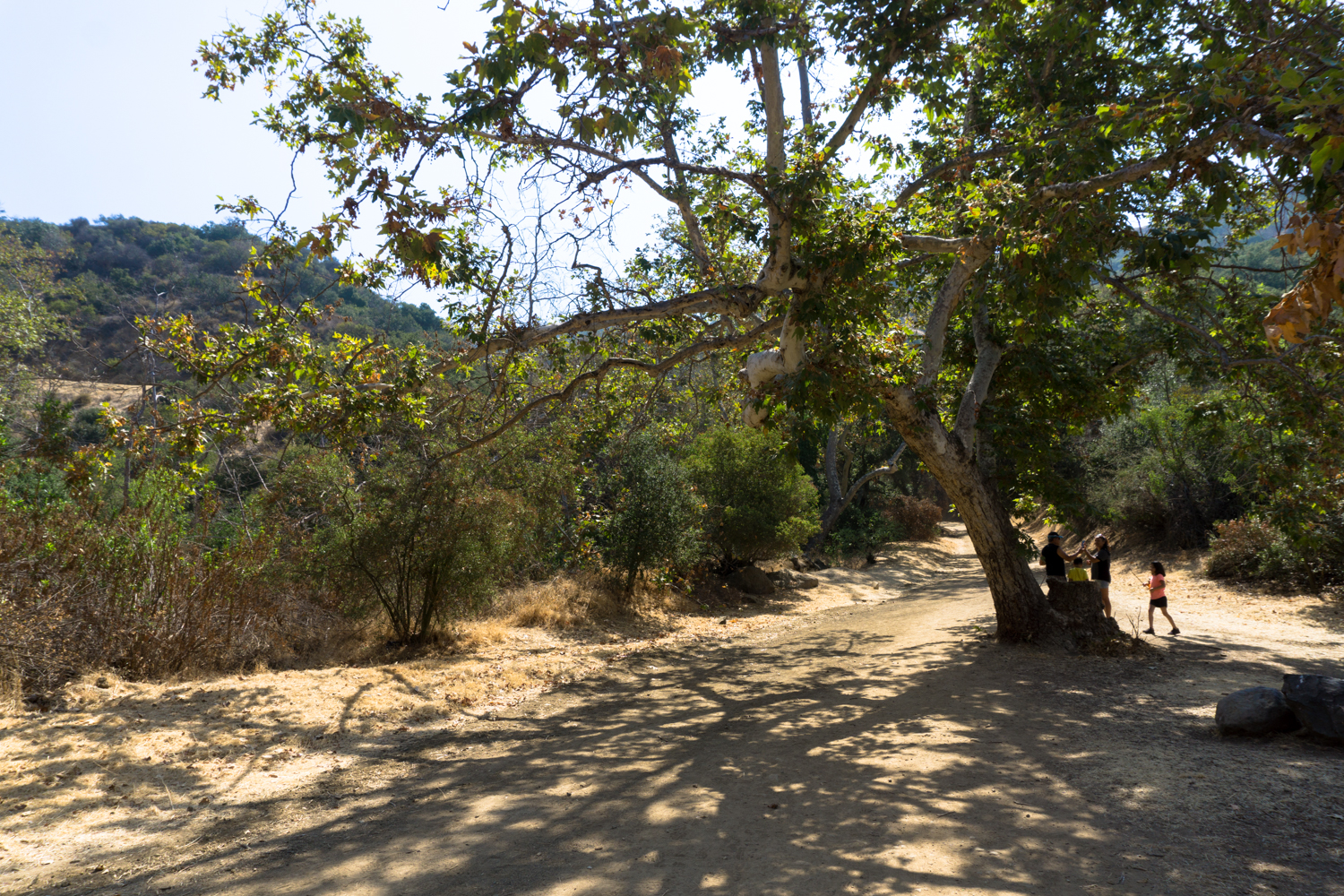 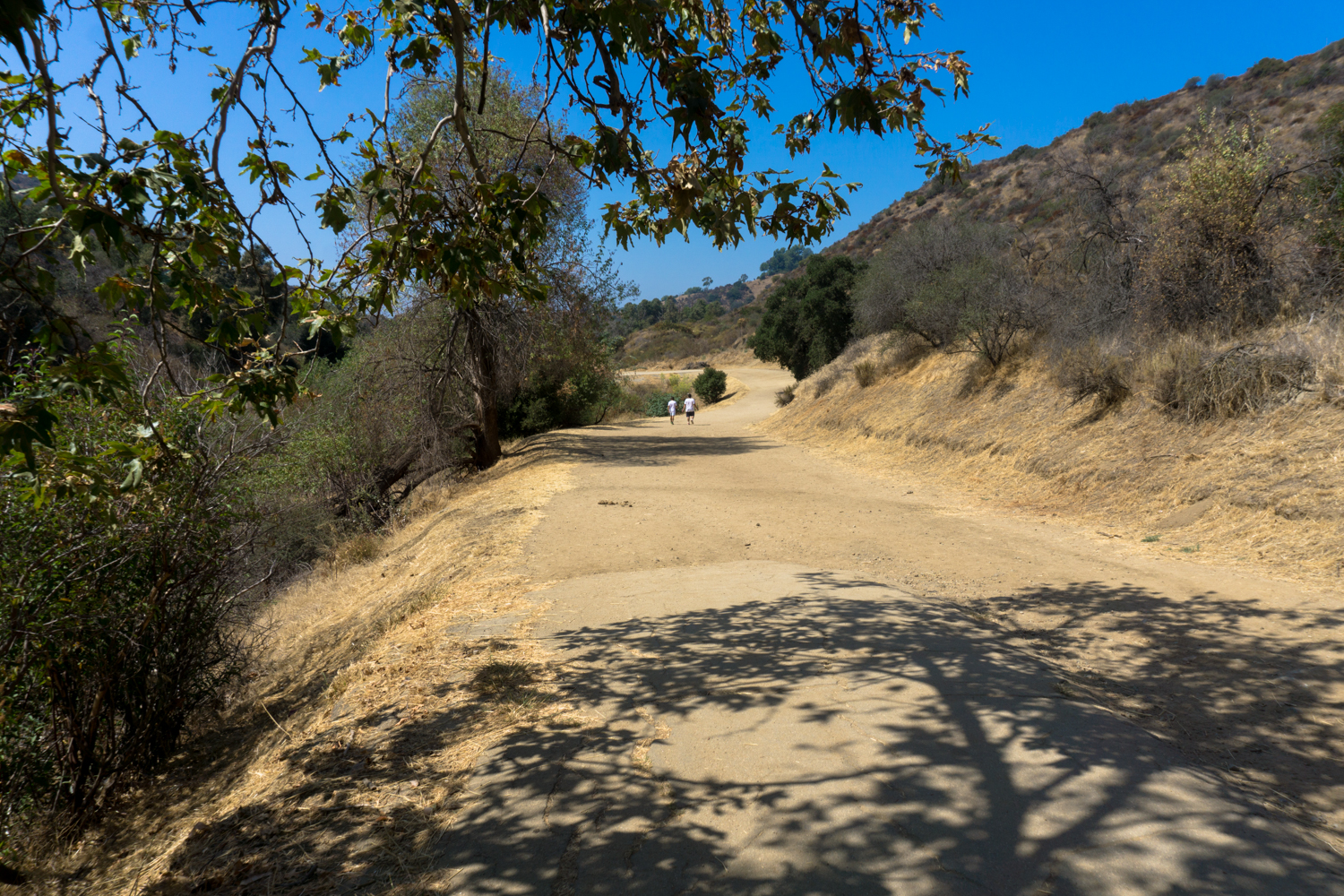 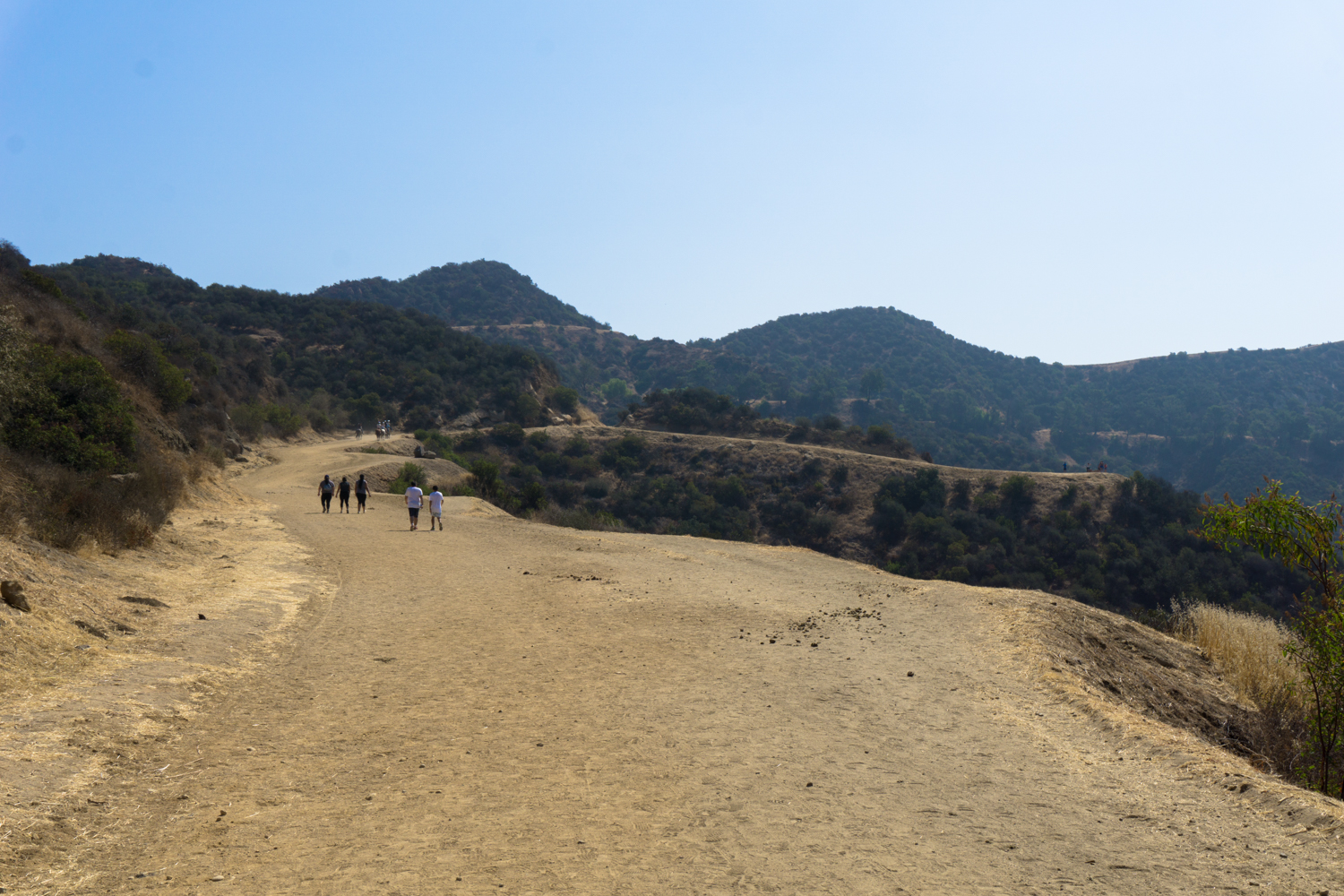 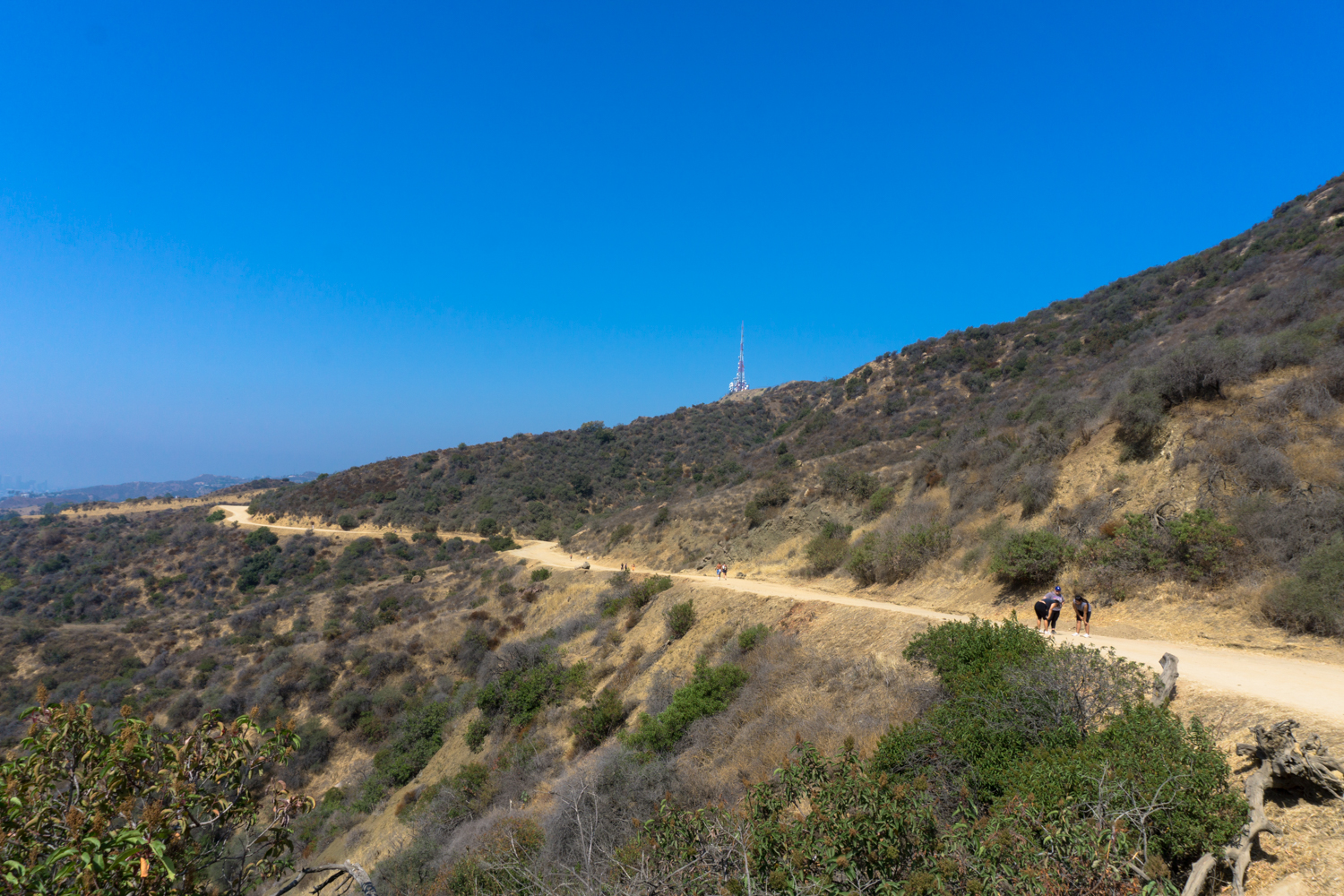 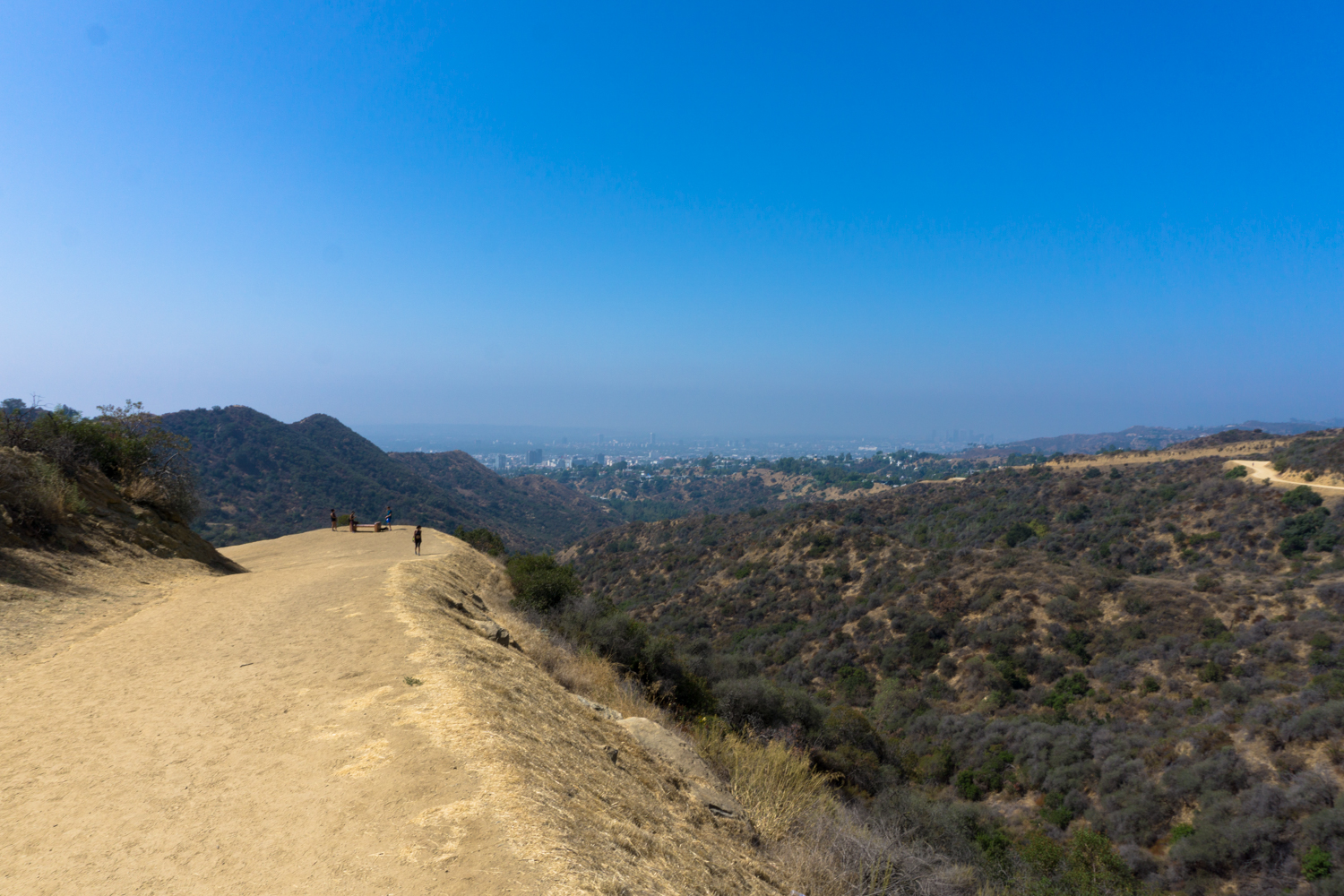 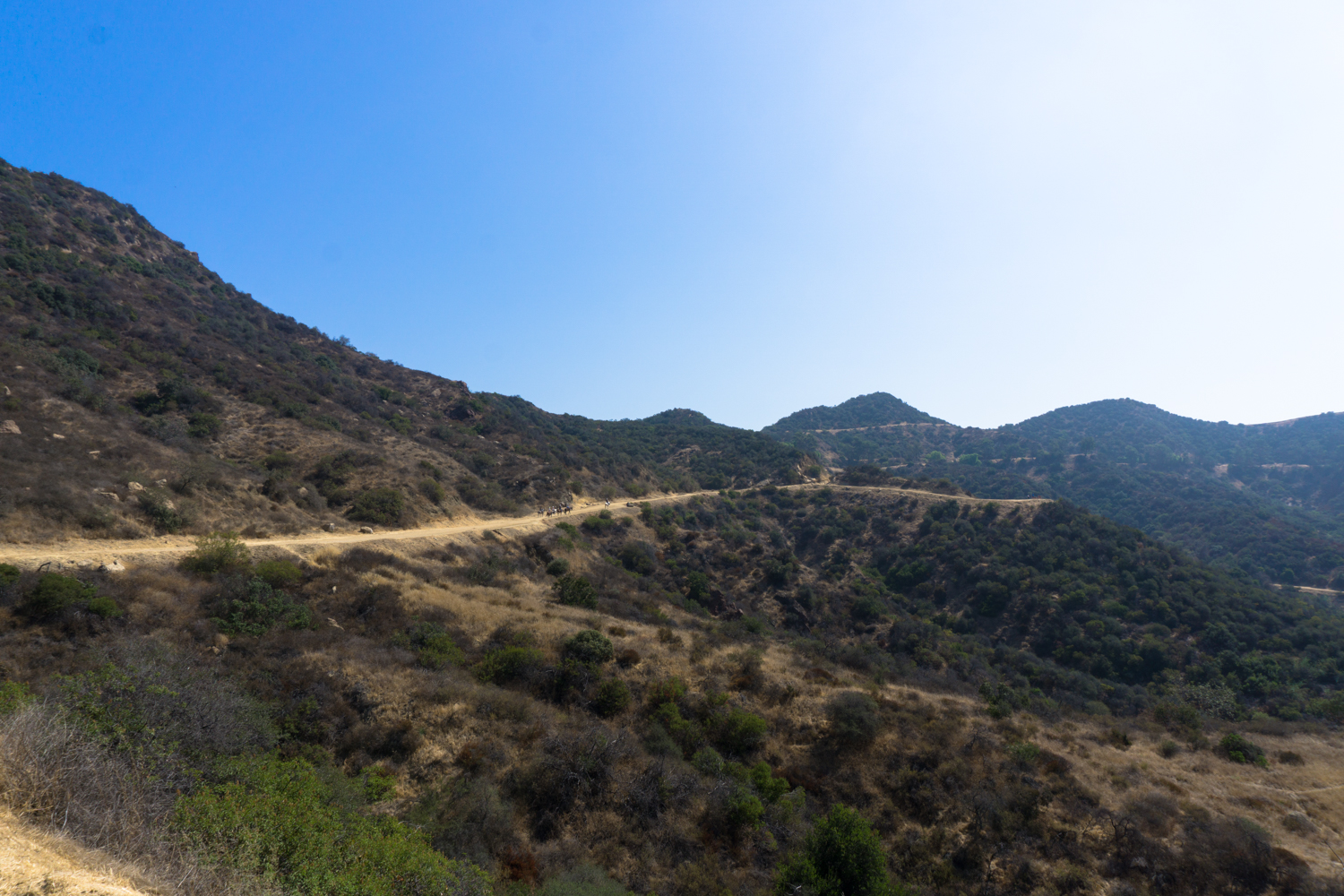 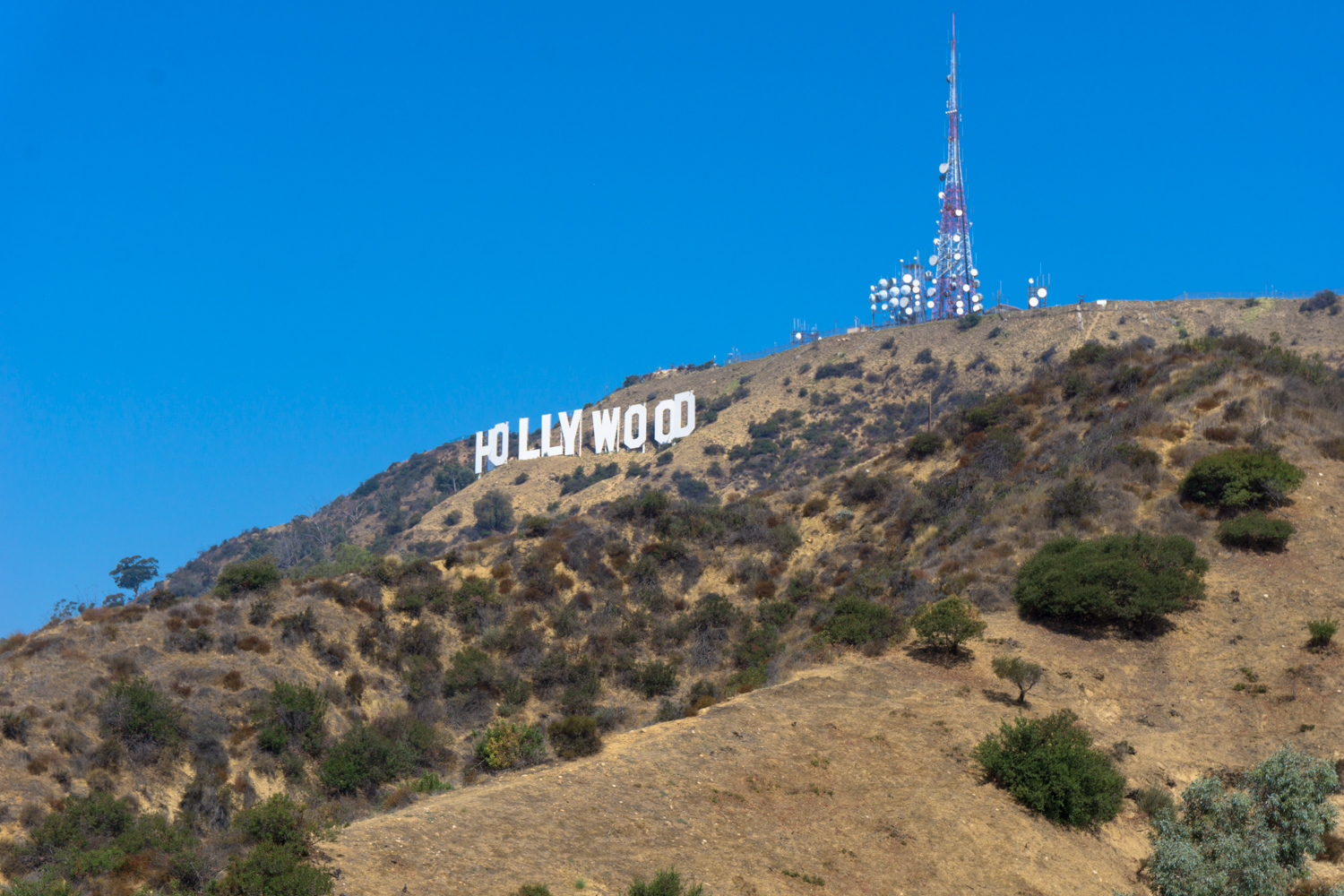 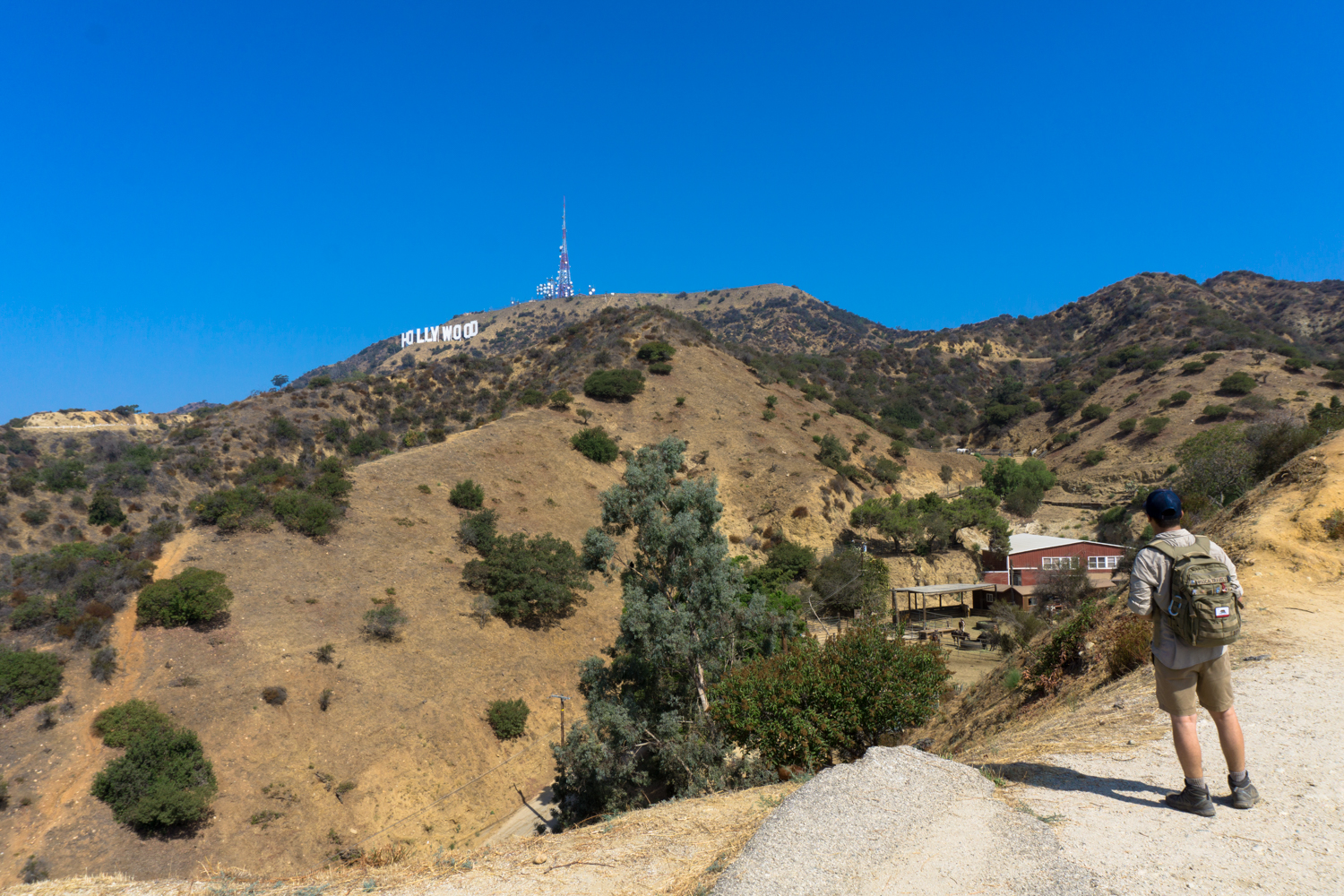 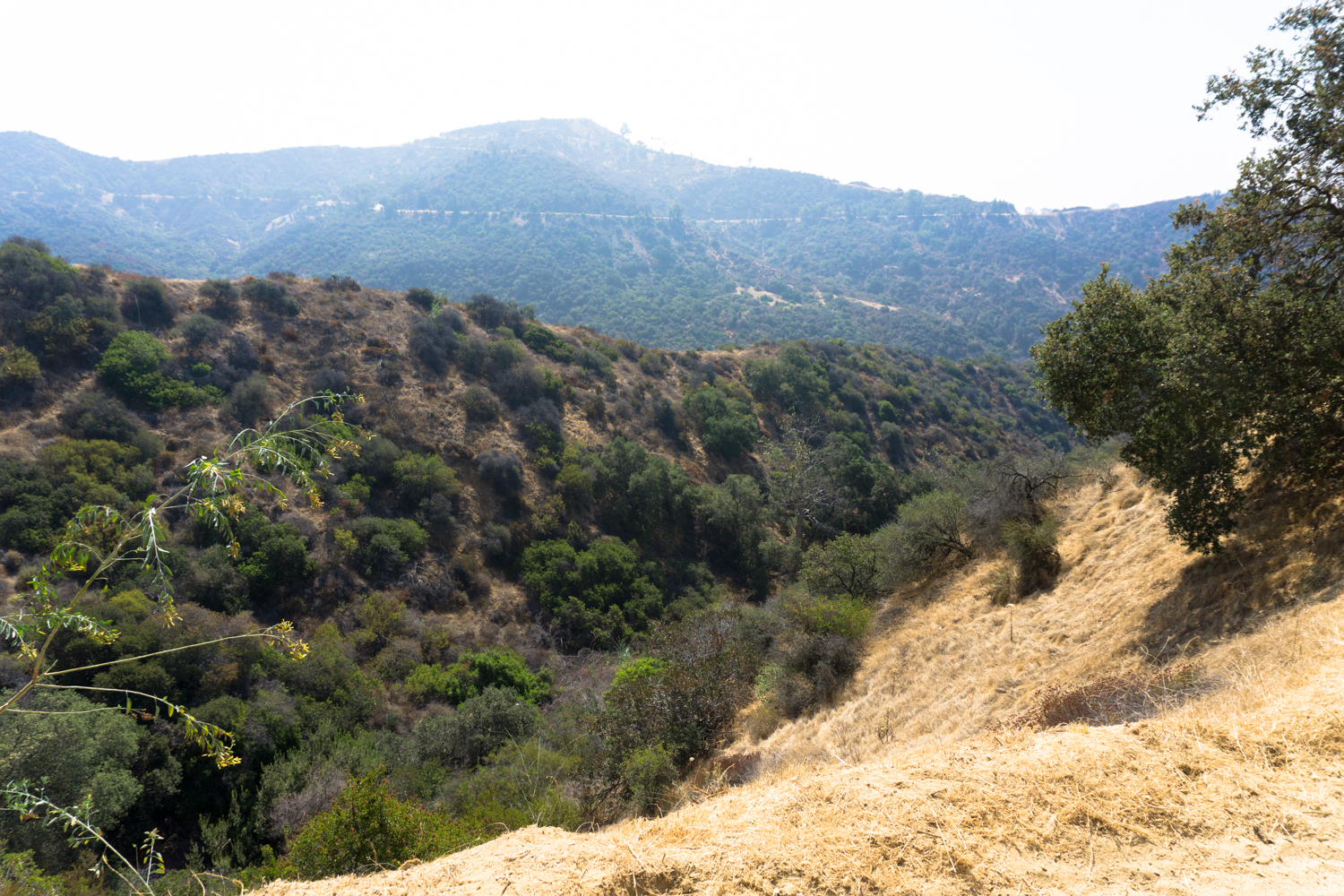 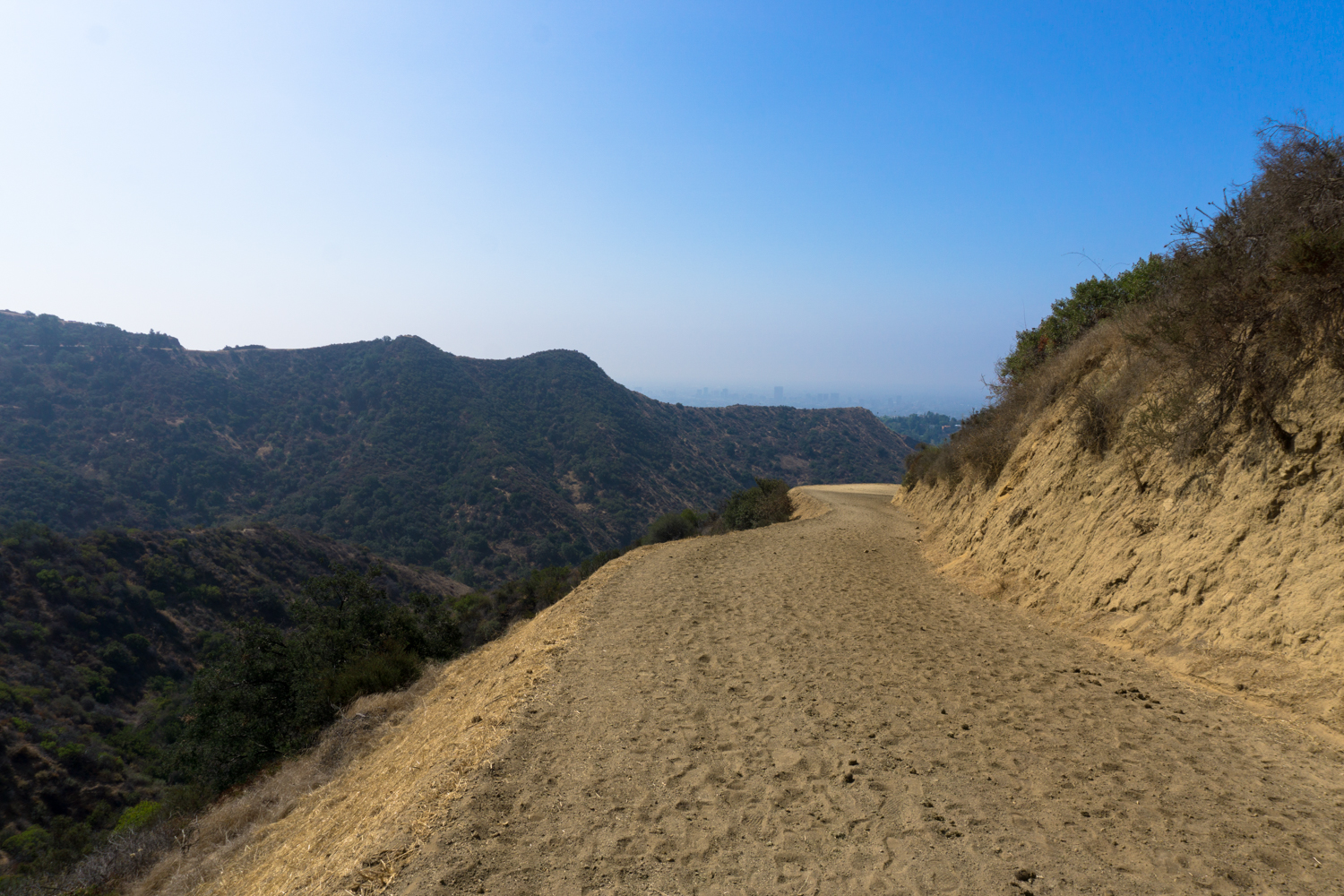 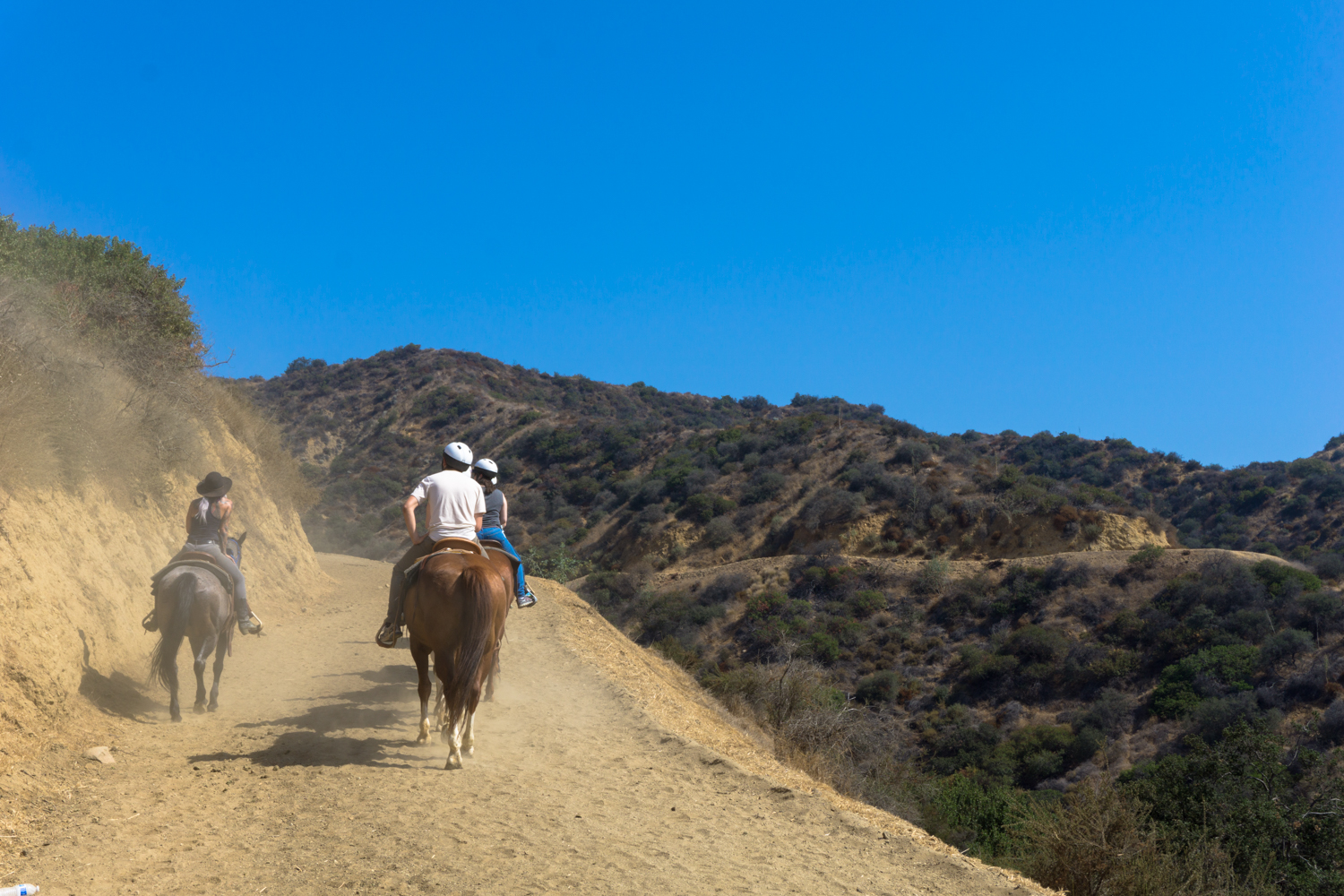 This trail is partially on paved road but mostly on wide fire roads and bridle trails. The routes are in good shape - there is deeper sand / gravel near the Sunset Ranch stables but otherwise you shouldn't have too much trouble. Route is mostly shadeless - bring water.

The trailhead begins at the end of Canyon Drive at the end of Brush (commonly called Bronson) Canyon. From the Gower exit of the 101, head north to Franklin Avenue and head east for five short blocks. Turn left on Canyon Drive (past the Gelson's market) and follow until the road ends. There is a small dirt lot and a moderate amount of street parking further down the canyon. Note: Griffith Park closes access gates for cars and pedestrians at sunset.