Much of coastal San Diego lies upon a series of sandstone terraces cut deeply in many places by intermittent and perennial streams. This characteristic “mesa and canyon” topography has been made less conspicuous by decades of barely restrained development. Today, subdivisions, shopping centers, roads, and a handful of municipal and county parks occupy, but do not entirely obscure this topography. 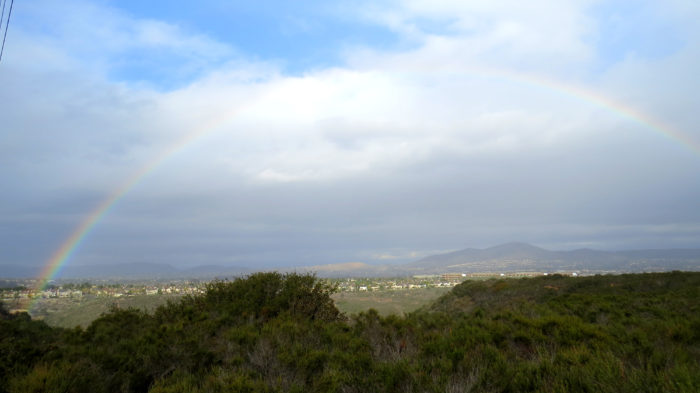 While open space has been a major casualty of San Diego’s rise as the state’s second largest city, foresight has protected some of the most valuable of the coast’s remaining open space parcels. Chief among these is the Del Mar Mesa Open Space Preserve. The preserve protects a mesa on the northern slopes of Penasquitos Canyon in the Carmel Valley/Sorrento Valley/Rancho Penasquitos area. Within the preserve, hikers will find old-growth coastal chaparral, cryptogamic crusts, vernal pools, riparian woodlands, and, perhaps most intriguing, a dense forest of scrub oak on the preserve’s north-facing slopes. 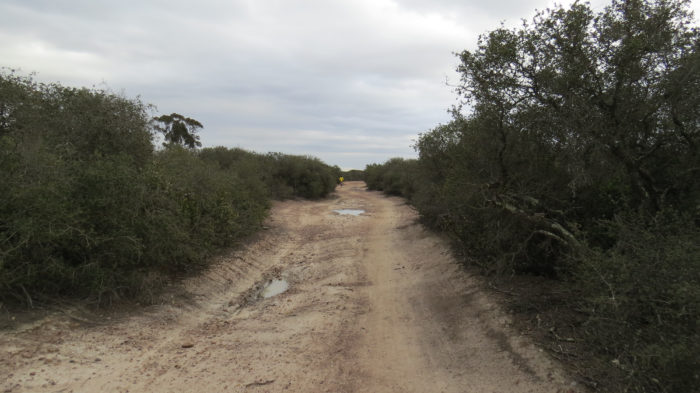 For years, the Del Mar Mesa Preserve had remained off-limits to recreation. Despite this prohibition, countless hikers and mountain bikers continued to enter the preserve illegally. In 2015, the preserve opened a part of the trail network to the public, although it kept some of the most sensitive vernal pool habitat closed to recreation. This network of multi-use trails visits most of the other features of the preserve, including the popular “Tunnels” section where the trail passes through the scrub oak forest. 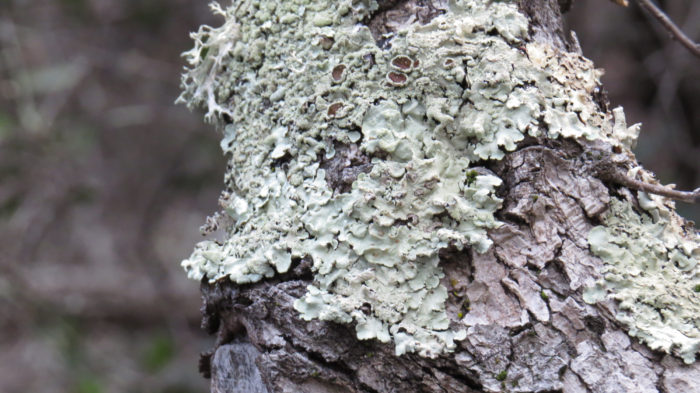 The easiest route into the preserve follows a community trail around a small, but extremely high dollar-value subdivision separate from other neighboring wealthy subdivisions before reaching the trail network proper. From the street parking, follow this community trail as it parallels Rancho Toyon Place and then wraps around the southern end of the subdivision. At .8 mile, a kiosk at a four-way junction indicates the entrance to the preserve. The dirt road that continues straight ahead runs east-west along the southern third of the preserve and will be your return route as well. 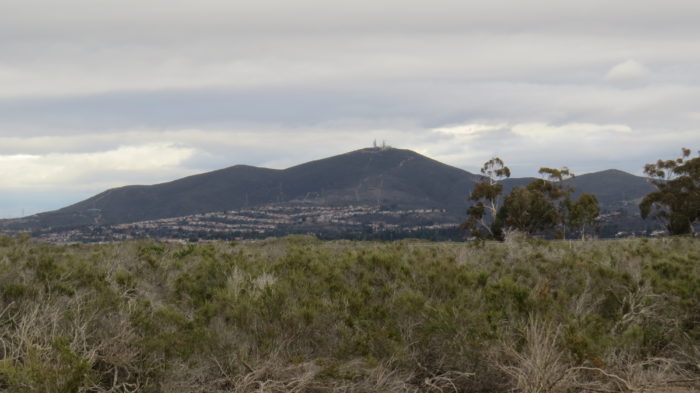 Stay straight at the junction to head east through shoulder-high growths of chamise. This old-growth coastal chaparral has all but disappeared thanks to development. Several shallow pools accumulate water on the road following rain storms. These pools are examples of vernal pool habitat, although they are not as pristine or well-protected as the preserve’s main vernal pools. 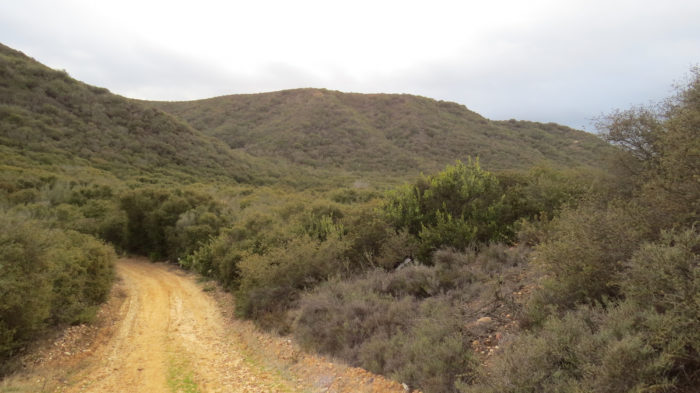 The vernal pools owe their existence to the composition of the underlying sandstone. This reddish, erosion-resistant sedimentary rock, known as Linda Vista Sandstone, is dense enough that water cannot seep through into the underlying rock layer. Instead, the water collects on the surface in pools, similar to what can be found at the Santa Rosa Plateau west of Murrieta. These vernal pools harbor some unusual life forms, including ephemeral fairy shrimp that come to life when water fills the depressions in the rock. These same mysterious shrimps go dormant during periods of drought. 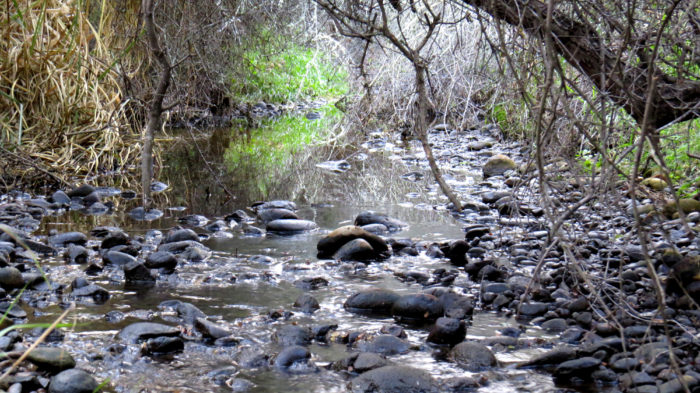 At 1.2 miles, you’ll reach a junction with a wide trail branching off on the left. Turn left here to head north over the flat, red sandstone. At 1.7 miles, a steep trail known as “Cardiac Hill” splits off on the right as it makes a steep descent into Deer Creek Canyon. Astute observers will notice a change in the rock as the red sandstone gives way to a much softer tan sandstone. This layer of sandstone, known as Torrey Sandstone, underlies the Linda Vista Formation throughout the northern portion of the county. Given Torrey sandstone’s softer composition, it is prone to rapid erosion and in some instances can form steep, narrow canyons such as the slot canyons on the north side of the San Elijo Lagoon and the fluted ridges at Torrey Pines State Reserve 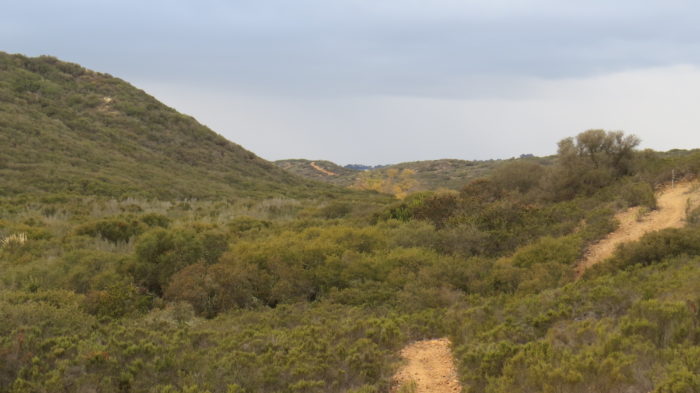 As you descend the Cardiac Hill Trail while largely avoiding any cardio exertion, you’ll bottom out at Deer Creek. Cross the seasonal creek and make the first right on a single-track trail. Unlike most creeks in the area, Deer Creek does not feature the usual riparian jungle composed of sycamore, willow, poison oak, live oak, and the occasional cottonwood. Instead, the creek lies hidden beneath what appears at first glance to be an uninspiring canopy of chaparral. Surprises await ahead. After .4 mile on this creek-side trail, make a right and drop beneath the canopy to enter an unexpected and inspiring habitat. 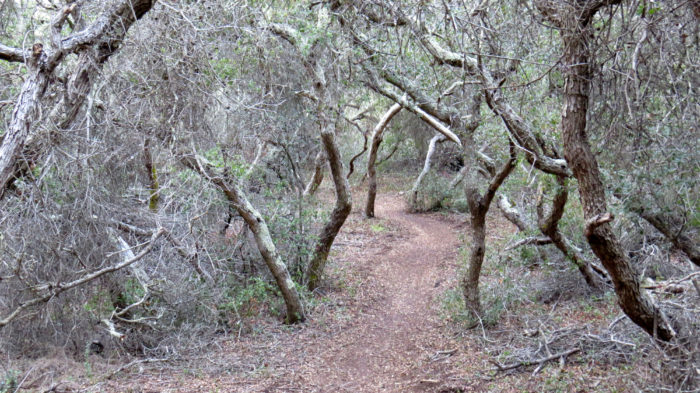 Deer Creek supports a dense, twisted, and gloomy forest of scrub oaks. Most of these oaks are no taller than 10-15 feet, but their density and contorted forms create the impression of a fairy tale forest haunted by witches. Lichens coat many of the branches, creating splashes of pale green. The creek trickles away just out of site. This fascinating bit of hiking is popularly known as the Tunnels. The trail you are following will soon bend to the left and become the Tunnel 4 Trail. 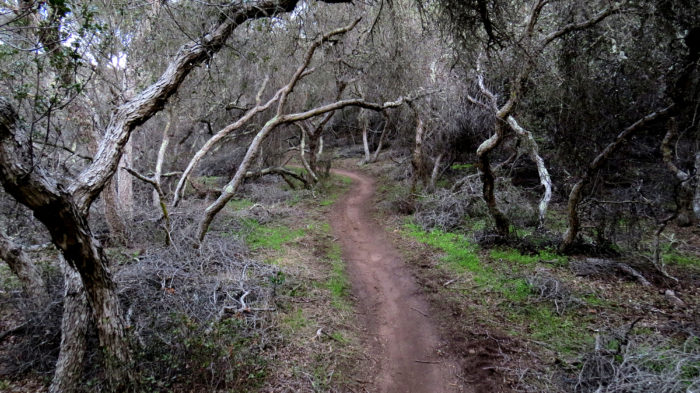 A word of warning about this section: this area is very popular with mountain bikers. On the wide former fire roads crossing the mesa, there is abundant space for riders and hikers to avoid each other. However, on the narrow single-track trail through the Tunnels, the visibility is poor, and there is very little room for users to avoid each other. To make matters worse, not all mountain bikers follow the practice of using bells to alert hikers to their approach Therefore, it is up to the hiker to remain mindful of possible encounters with mountain bikers on this section. 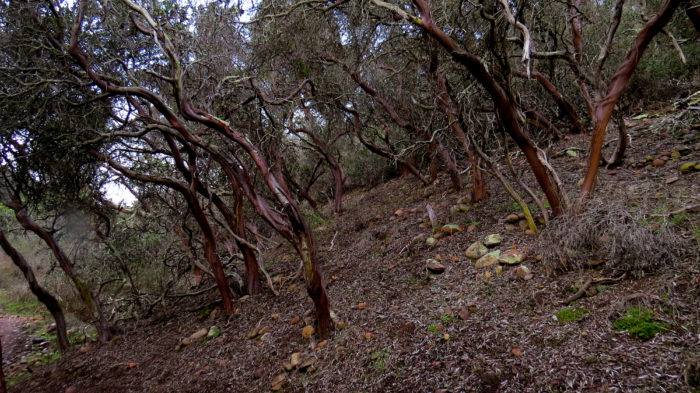 The Tunnel 4 Trail bends to the left and begins a gentle ascent through a ravine that will take you back up to the mesa. As you progress, you’ll notice impressive specimens of Del Mar manzanita mixing into the scrub oak forest. After .6 mile of twisting and turning, the trail flattens out as it regains the mesa near a grove of towering eucalyptus trees. A fenced, signed boundary on the left indicates the closed portion of the preserve. The vernal pools are on the other side of the boundary, and we urge you not to cross the boundary so as to protect this rare habitat. 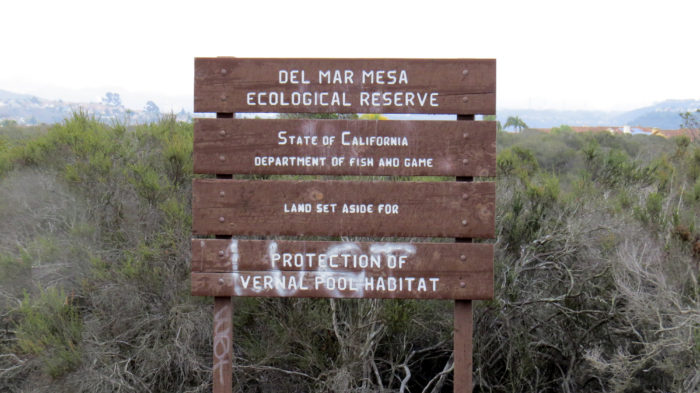 “You shall not pass” – Gandalf the Gray 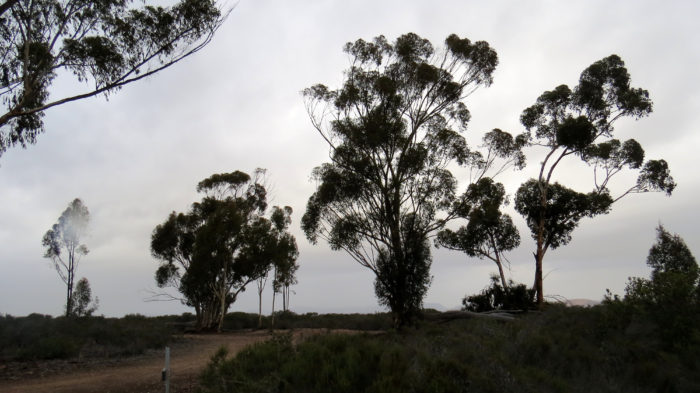 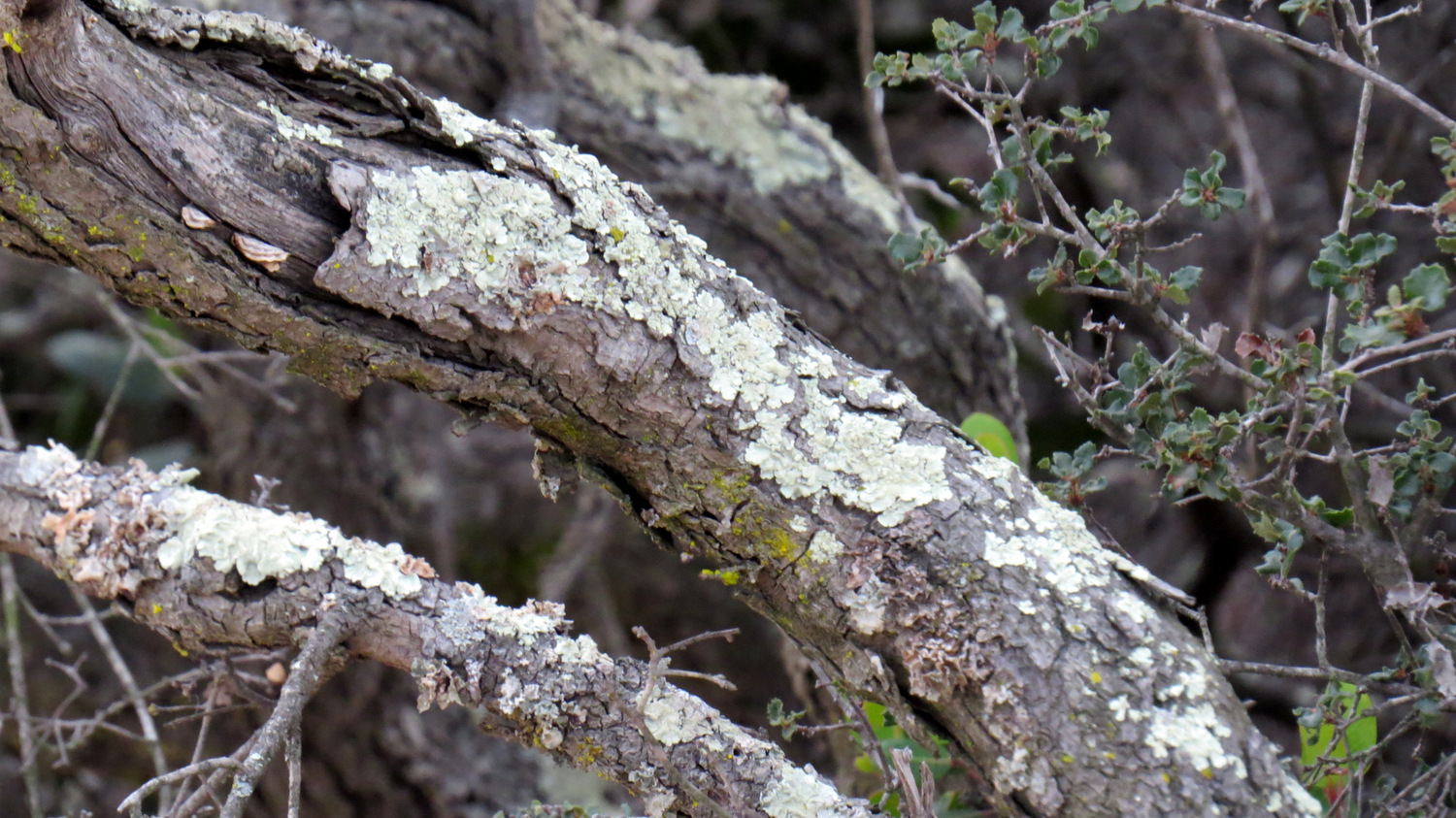 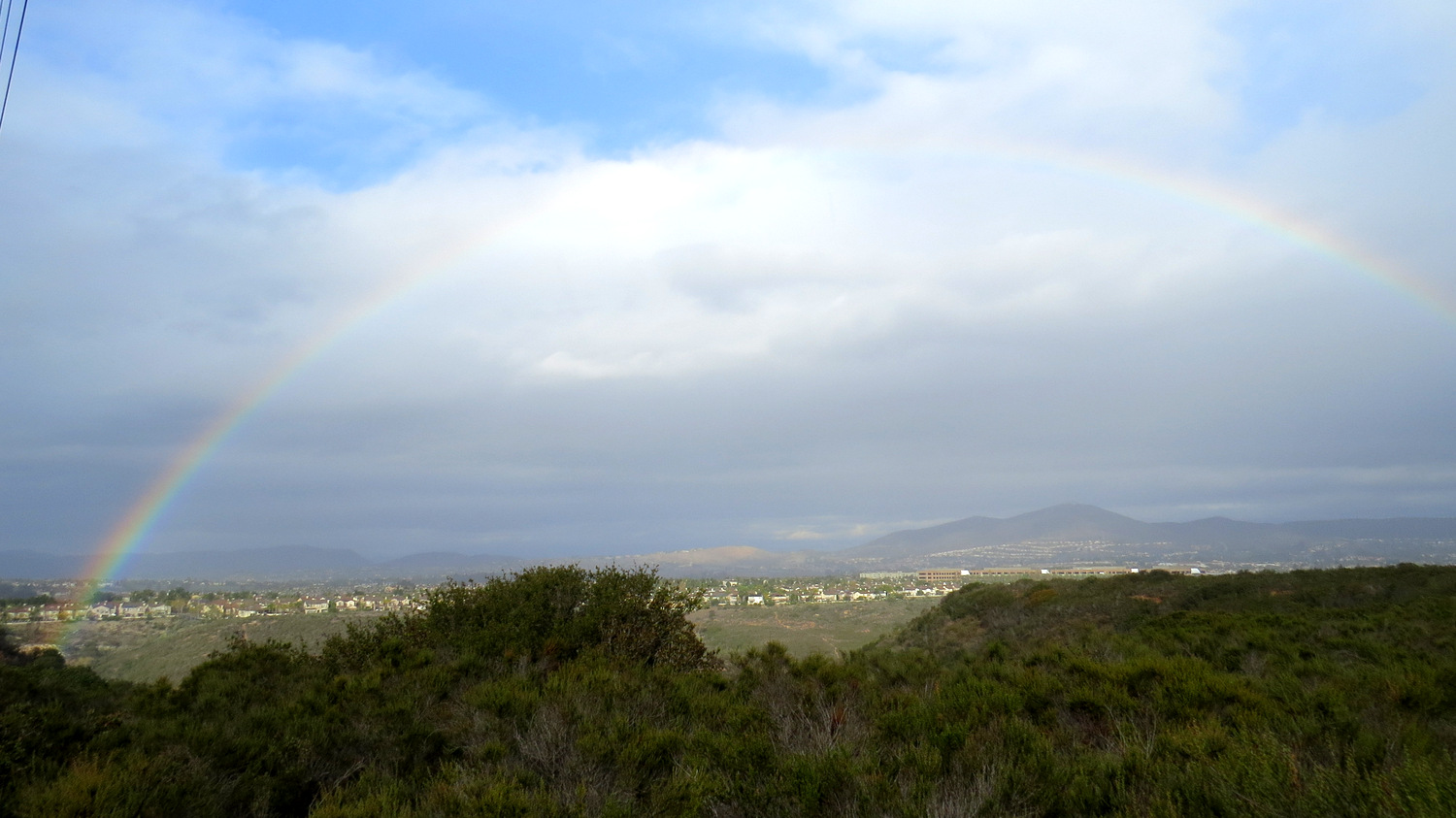 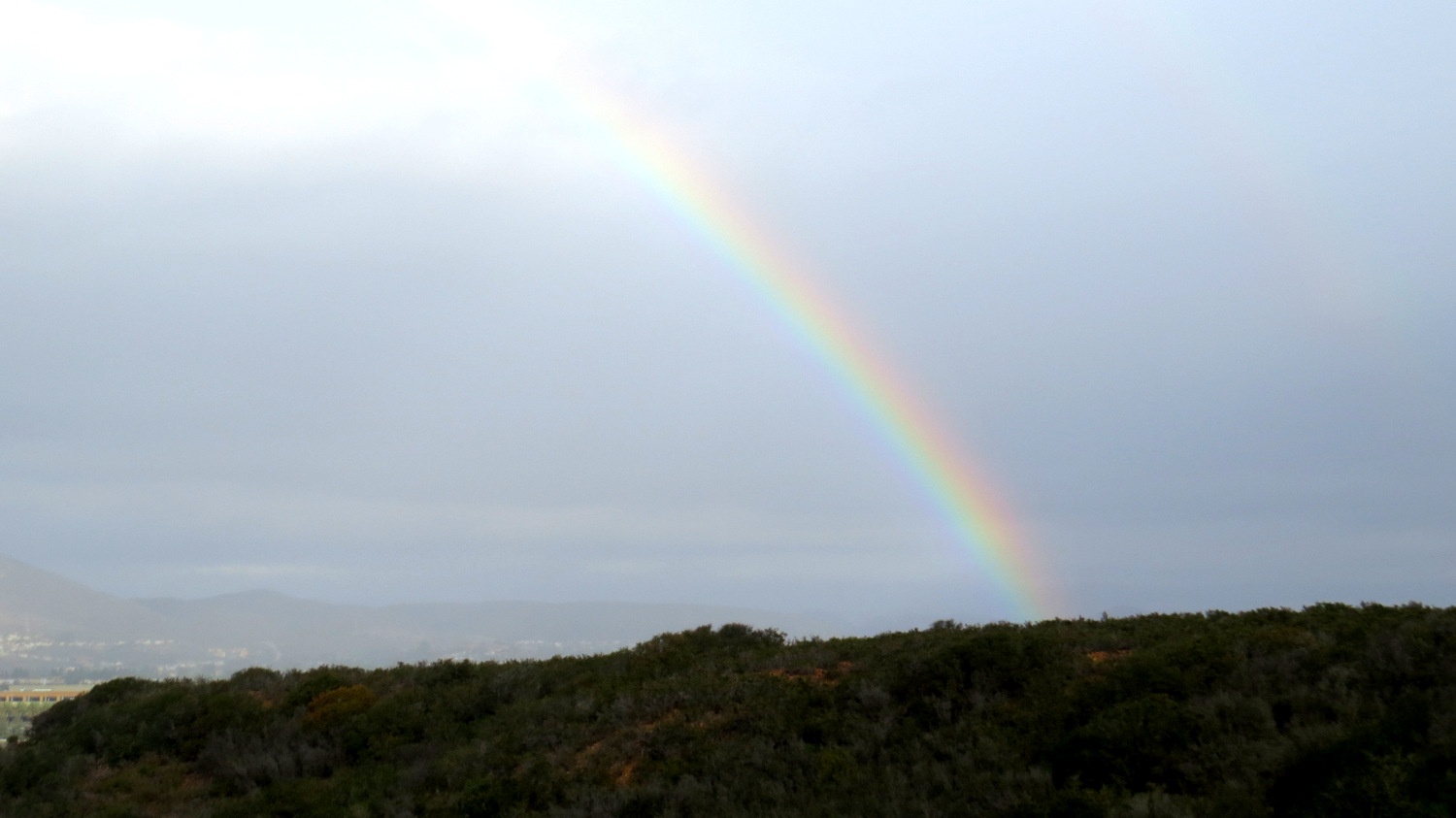 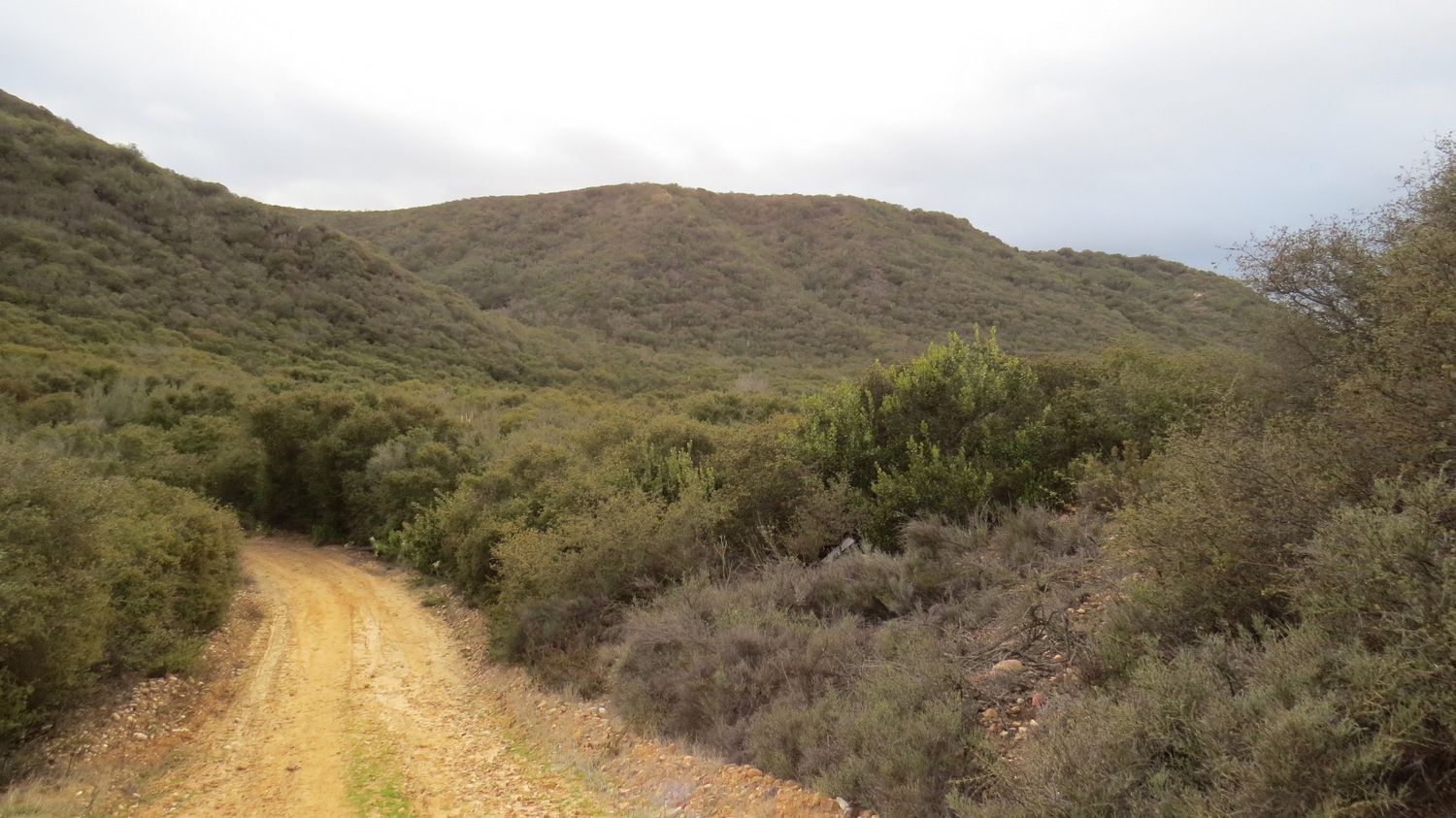 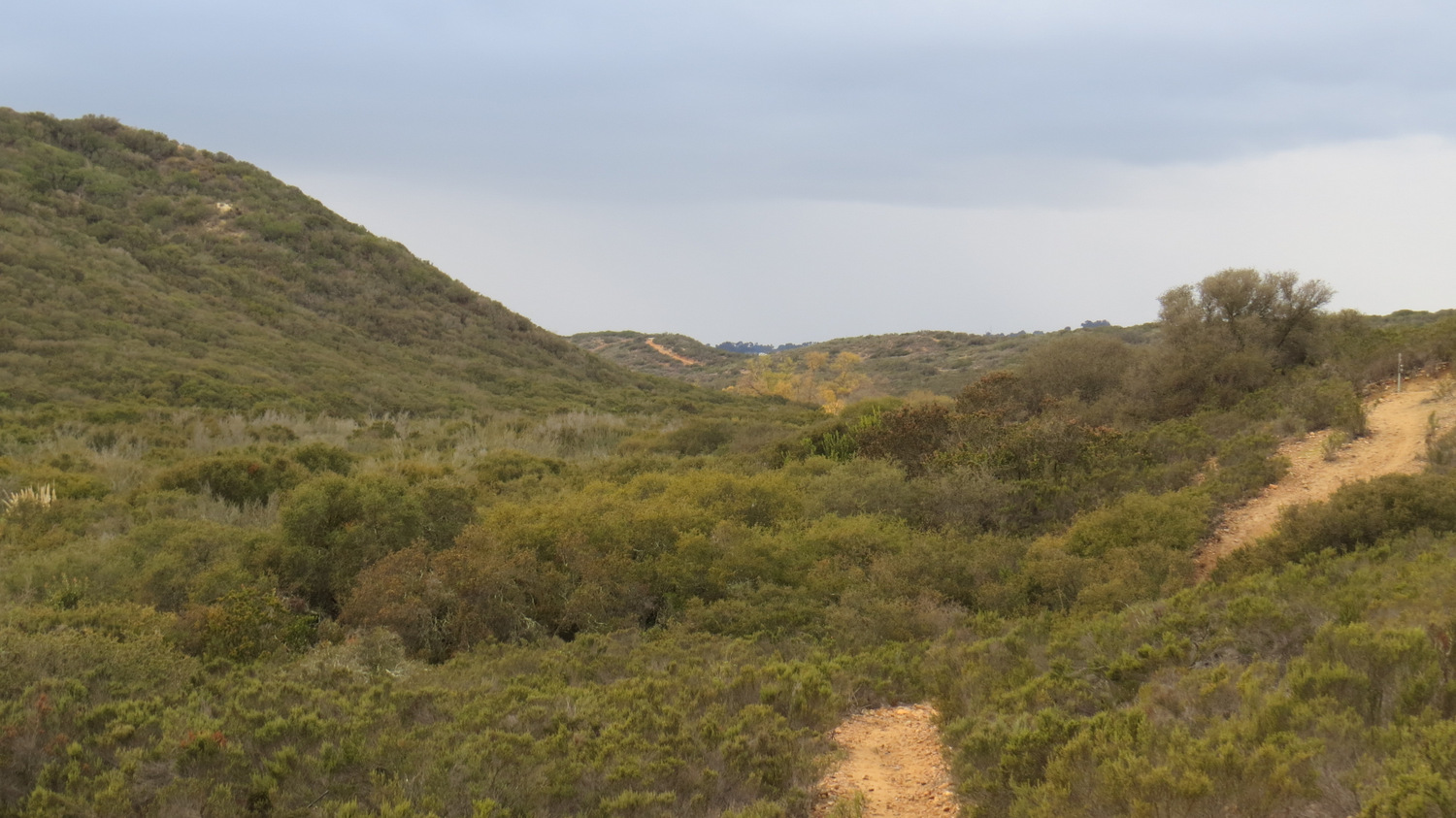 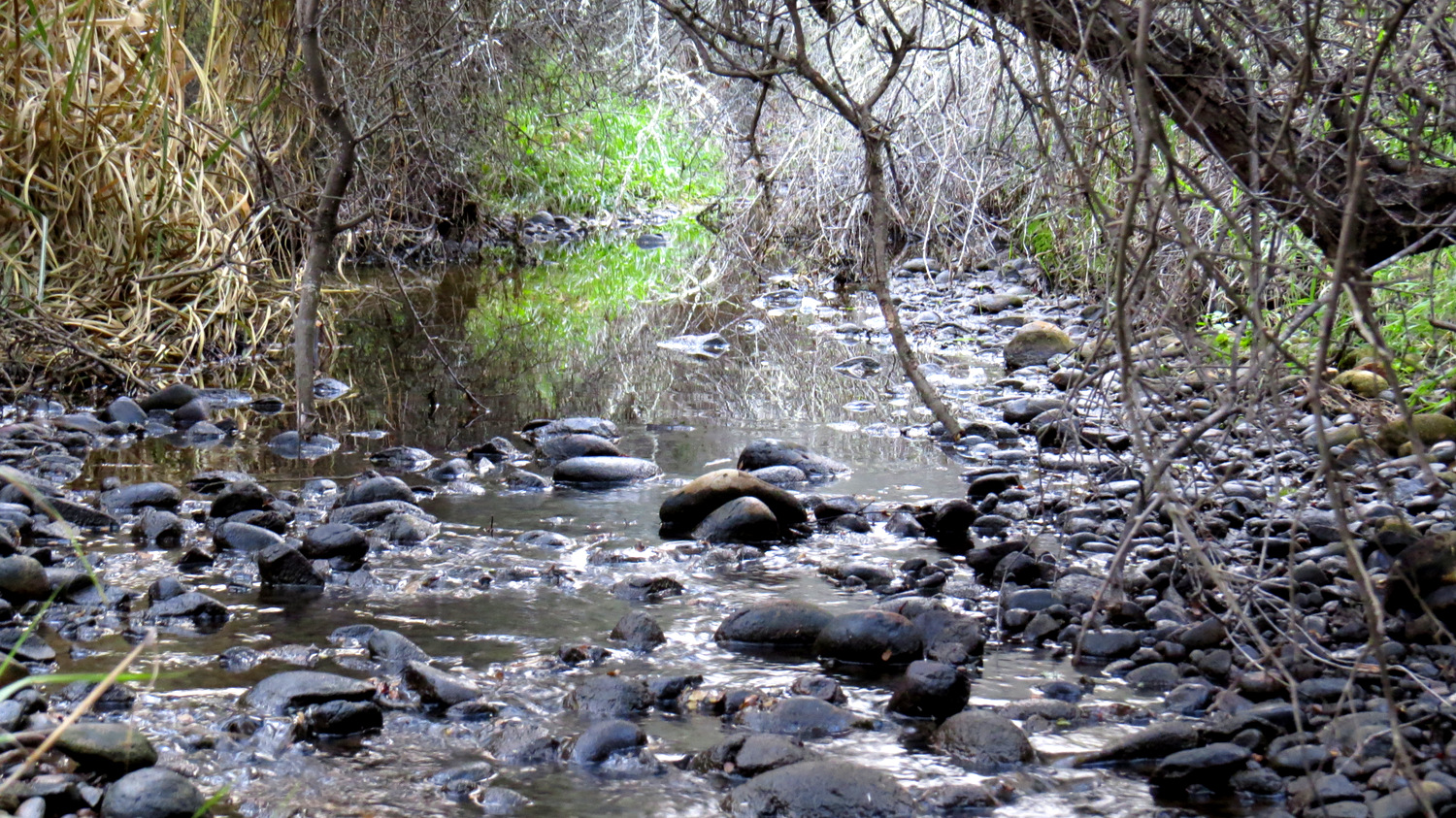 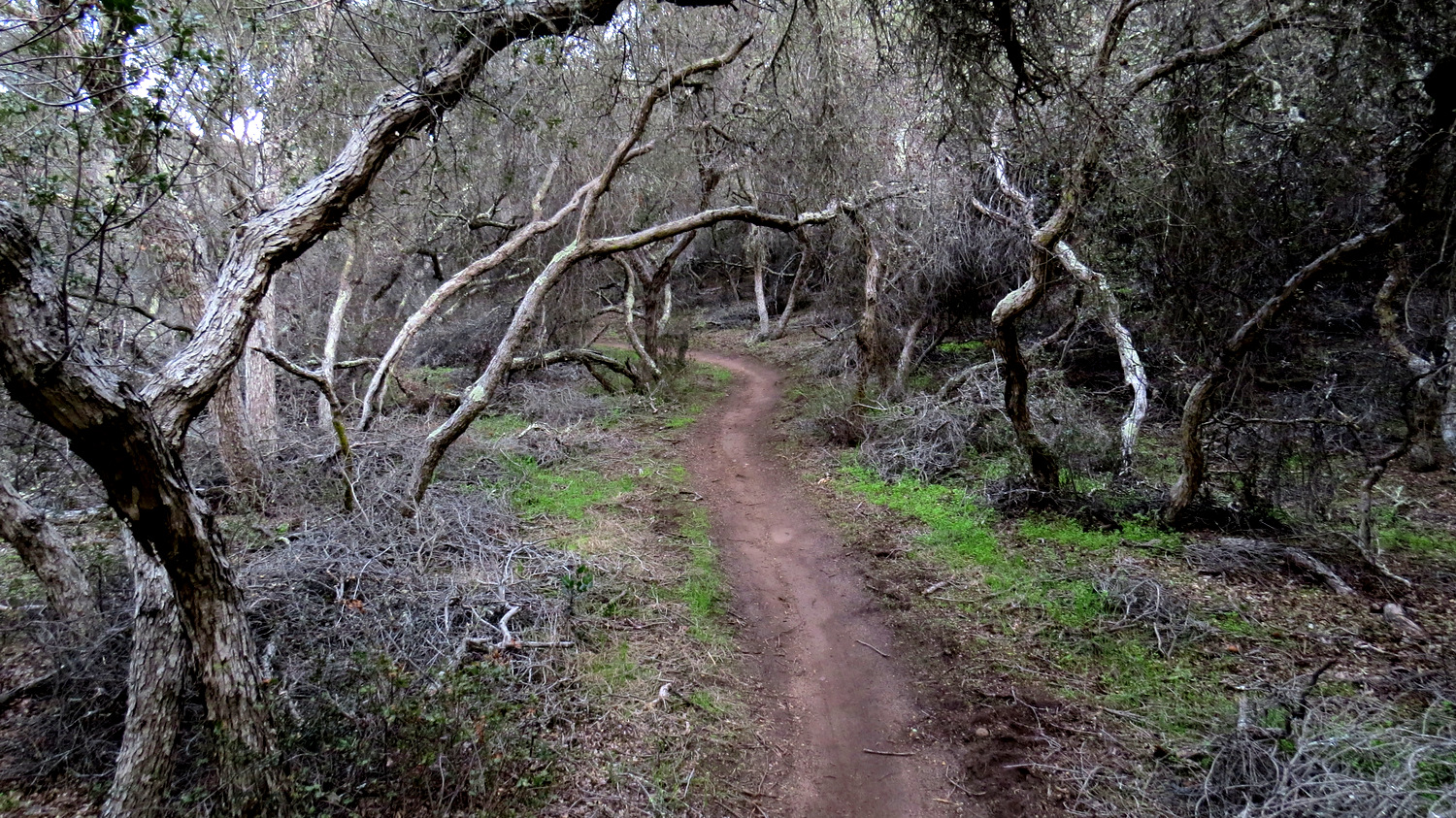 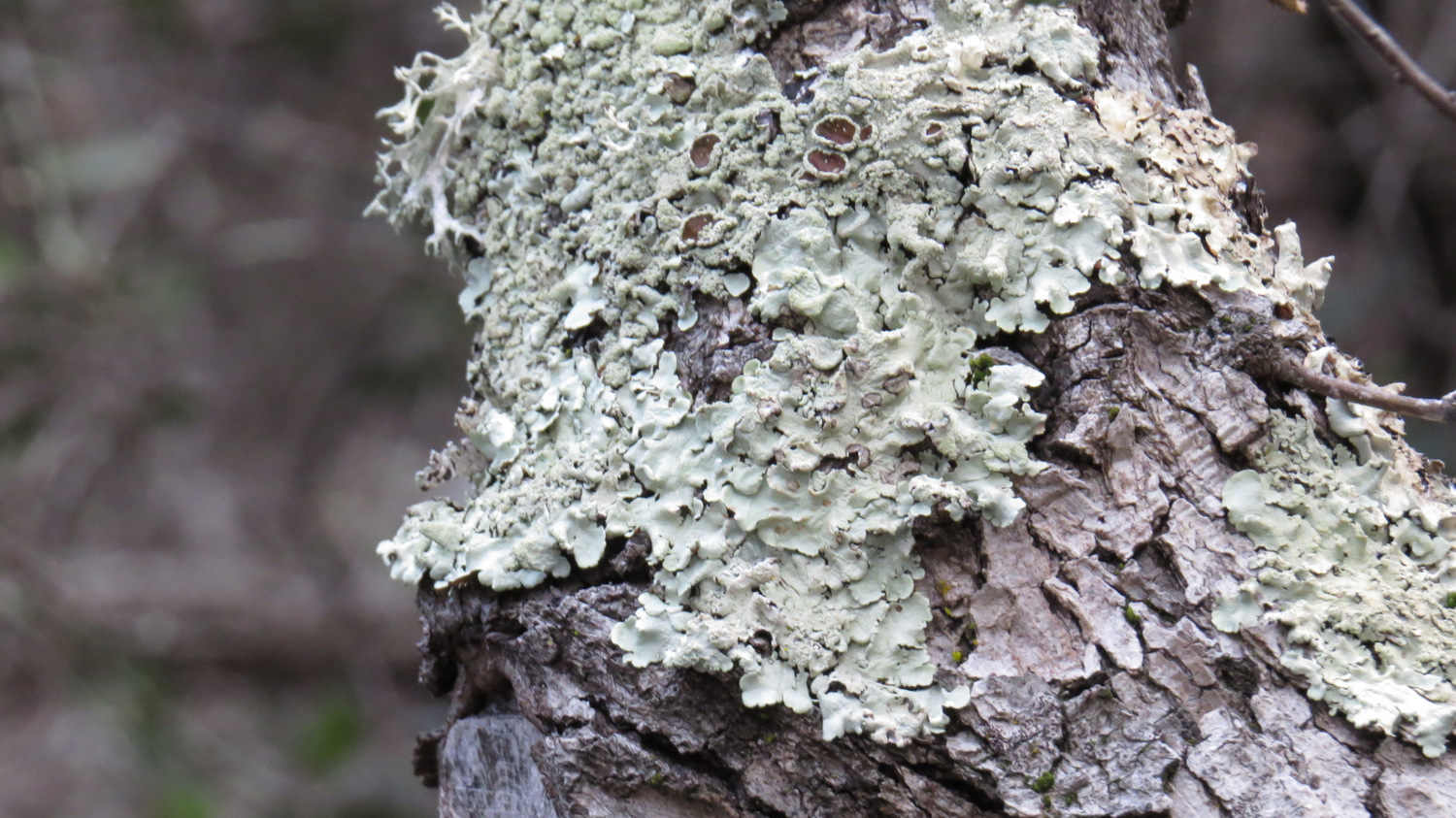 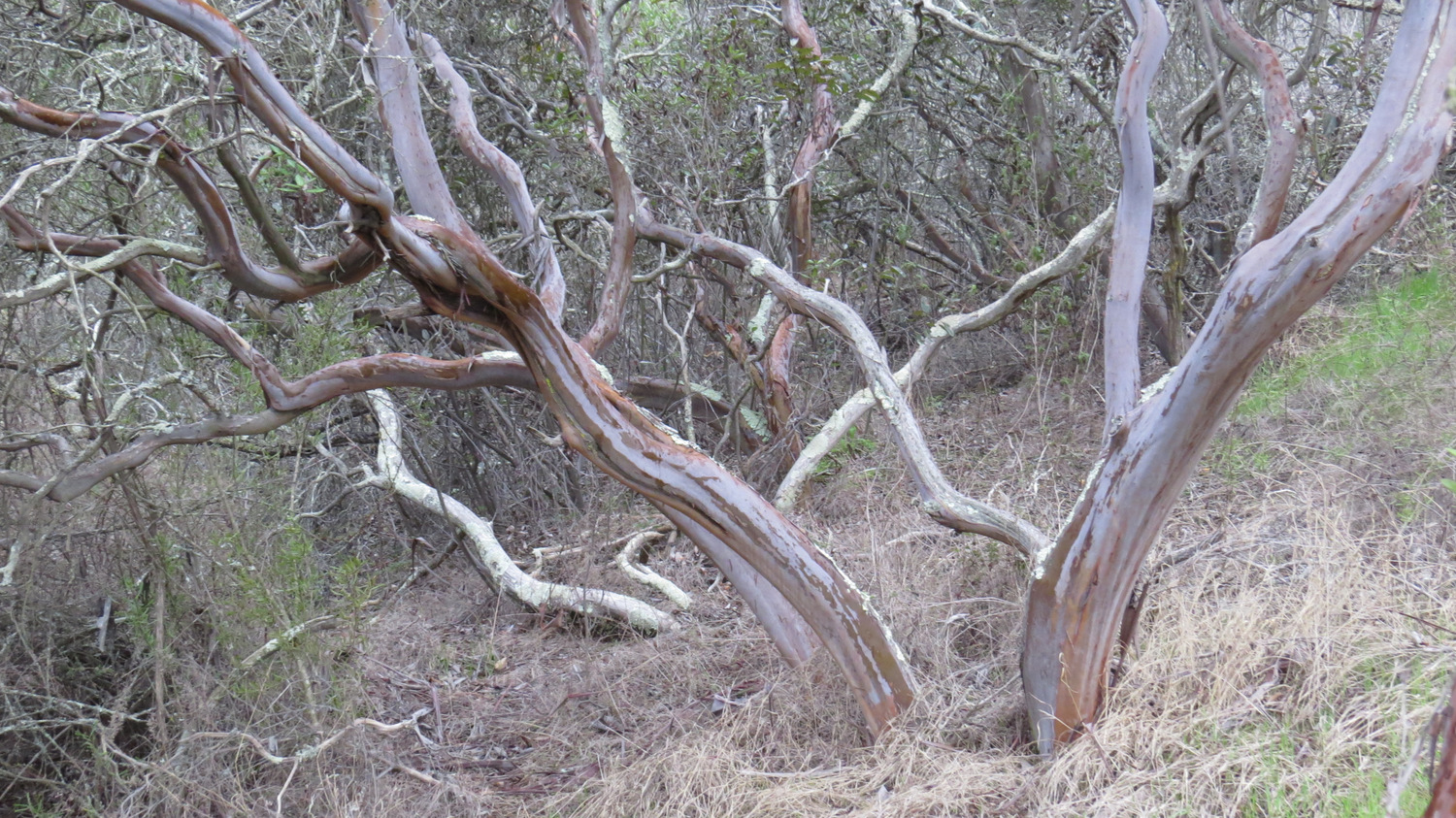 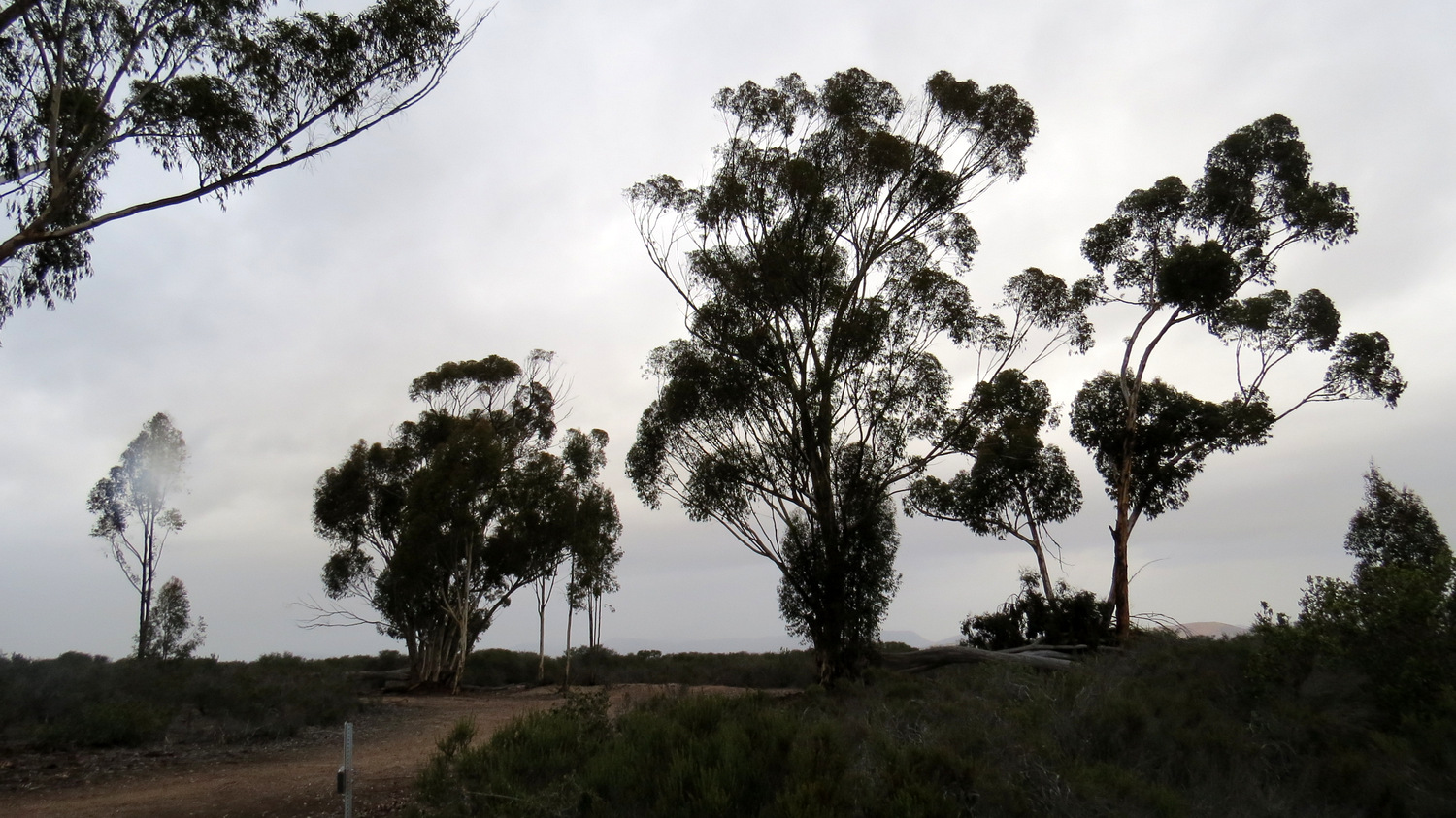 The trails are in good shape. Most of the paths through the preserve are fire roads. The Tunnel 4 Trail runs through scrub oak forest. The popularity of this trail with mountain bikers combined with poor visibility means that hikers must stay alert to avoid getting run over.

The nearest campground adjacent to the reserve is at San Elijo Beach.

From CA-56, exit at Carmel Country Road, heading south. After .4 mile on Carmel Country Road, turn left onto Del Mar Mesa Road and continue for 1.7 miles. Keep right to continue onto Little McGonicle Ranch Road for another .3 mile. Turn left onto Del Vino Court, and then make your next right onto Rancho Toyon Place. After .2 mile, you'll reach a junction with Toyon Mesa Court. Find street parking near this junction. The use trail paralleling Rancho Toyon Place is on the south side of the street.