Cuyamaca Rancho State Park boasts an embarrassment of natural riches, including lakes, streams, springs, mesas, the largest deer herd in the county, multiple flocks of wild turkeys, seemingly infinite hiking opportunities, and, of course, a quartet of easily accessible, 5,000’+ peaks (Cuyamaca, Middle, Stonewall, and Oakzanita). Of the four, the popular Stonewall Peak Trail is the most accessible while offering great views over Cuyamaca Rancho State Park and into Anza-Borrego Desert State Park. 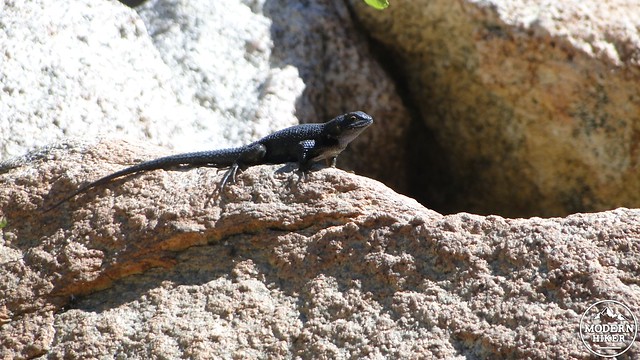 Stonewall its name due to its proximity to the nearby Stonewall Mine, which was itself named after Stonewall Jackson. My review of the history of the  does not turn up much else until 2003, when largest fire in California’s recorded history swept across Cuyamaca Rancho State Park and incinerated most of the landscape. The destruction from that fire is still very much in evidence, and it also presents the main challenges of the trail, including overgrown vegetation and some plants with a nasty tendency to cause allergic reactions 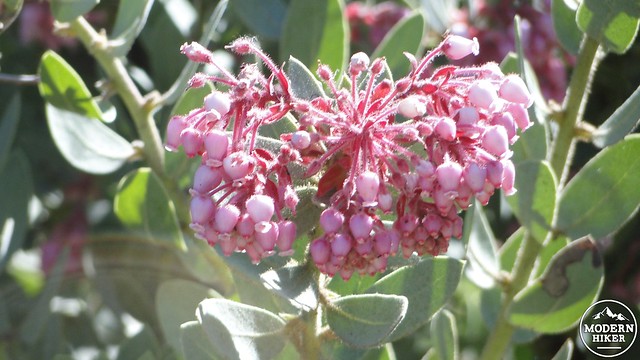 Manzanita flowers (which are harmless)

Poodle Dog Bush, which is a fire-following shrub with a nasty habit of causing severe allergic reactions similar to poison oak, is present at the outset of this hike in abundance. It is easy to avoid if you stay on the trail, but it does pose a danger if you are not familiar with the plant. If you’re uncertain of what the plant looks like, it is almost impossible not to notice what it smells like. The scent is very reminiscent of marijuana. If you smell something that smells like marijuana while walking through a burn area, chances are reasonably good that you’re smelling poodle dog bush. 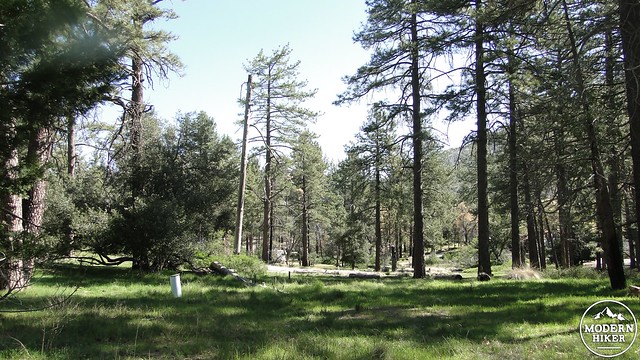 The woods near Paso Picacho Campground

Starting from the day-use parking lot adjacent to Paso Picacho Campground, cross Highway 79 and find the wide dirt trail on the other side of the road. You’ll pass through a small copse of singed pines before the Stonewall Peak Trail branches off to the right. You may notice the Cold Springs Trail branching off to the left, but you’ll wish to avoid that, as it has a ton of poodle dog bush. The Stonewall Peak Trail will begin a gentle climb out of the trees and will pass the largest patches of poodle dog bush. 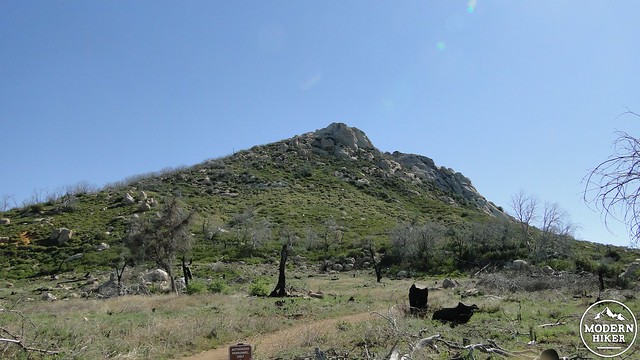 If you pay attention to the flora on the ground, you may notice the occasion pine sapling placed behind a black mesh screen. These saplings are part of the attempt to re-forest Cuyamaca Rancho State Park. Coniferous trees play a role in sequestering carbon from the atmosphere, and numerous agencies are working with the State Park agency to attempt to revive Cuyamaca’s forest in order to increase the region’s capacity to support a forest that will assist in sequestering carbon. You can see evidence of this Herculean effort throughout the park, and many of the saplings appear to be taking root. 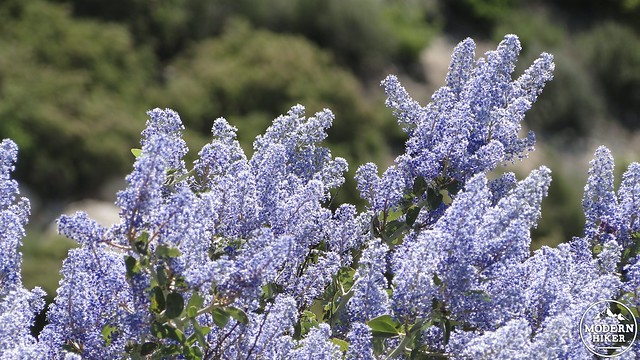 A gorgeous patch of ceanothus

From the get-go, the trail will begin switchbacking up the west face of the peak through recovering chaparral and oak trees. You’ll see a lot of wildflowers in season, especially ceanothus, although you’re also likely to see monkeyflower, penstemons, manzanita flowers, and a list of others. As the trail winds upward, views begin to open up to the west, and sometimes to the north. The landmarks you’ll see right away include Cuyamaca Peak, Middle Peak, North Peak, the village of Cuyamaca, and Lake Cuyamaca with its small patches of forest. 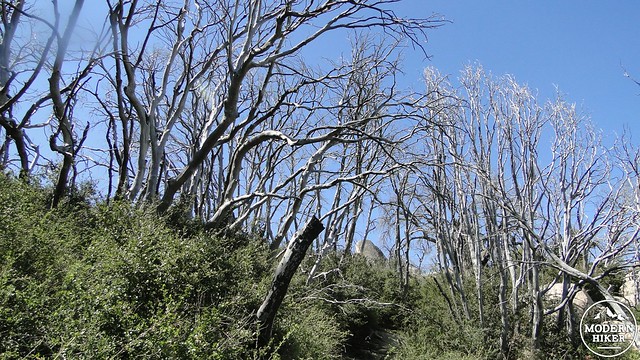 The trail continues along in this way for the next 1.5 miles, and you will gain the majority of your elevation along this stretch. Soon enough, the trail will come to a relatively flat section leading up to the peak. At this point, you will encounter a trail that heads north and descends down Stonewall’s north face to connect with the Caballos Trail and eventually to Lake Cuyamaca. It’s possible to make a loop that combines the two landmarks, but it’s a long affair that will be left for another day. Bear right at this junction and continue toward the peak. 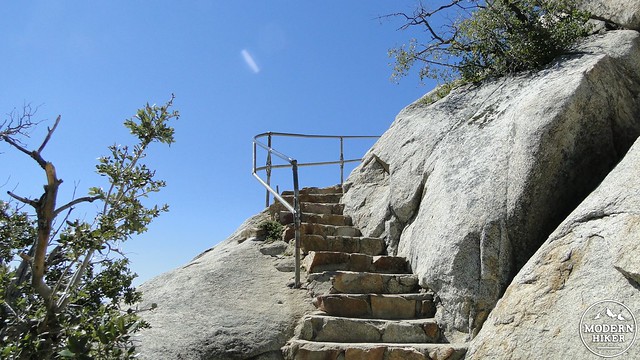 Stairs to the summit

You’ll come across a few use trails leading to various viewful outcrops. The main trail will aim toward the large granite outcrop at the summit of the peak. The trail will arrive at a rocky staircase with a guard rail to protect hikers from going man overboard. This section is probably best avoided if there is ice or snow on the trail, as the staircase can be excessively slippery under those conditions. People have fallen from this section and even died in the past, so if conditions look icy, you may wish to try something else or stop short of the peak. 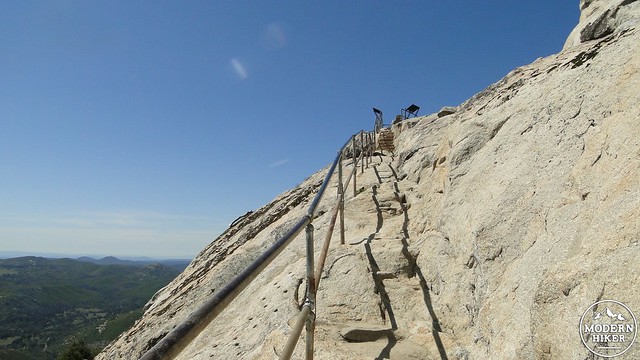 Last gasp to the summit

Should you continue on, you will come to the summit, where you will find guard rails boxing in a relatively flat section. You’ll see some interpretive panels pointing out the local landmarks and giving some explanation to what you’re looking at. To the south, you’ll see the drainage area for the Sweetwater River, East Mesa, and nearby Oakzanita Peak before the land yields to the rugged Pine Creek Wilderness and northern Mexico. Looking west are the main ramparts of the Cuyamaca Mountains, plus a few small snatches of San Diego County’s interior.

To the north, you’ll see Palomar Mountain, Lake Cuyamaca, North Peak, and bits of Julian. And, to the east, you’ll see some of Anza Borrego’s high country, including Granite Mountain and Whale Peak. Not bad for two miles of hiking. From the summit, it’s a simple matter of retracing your steps down the switchbacks, past the dreaded poodle dog bushes, and back across the highway to Paso Picacho, where you can repose in the shade of the pines and cedars that were spared from the 2003 fire.

– There is a $10 day use fee to park at Paso Picacho campground. 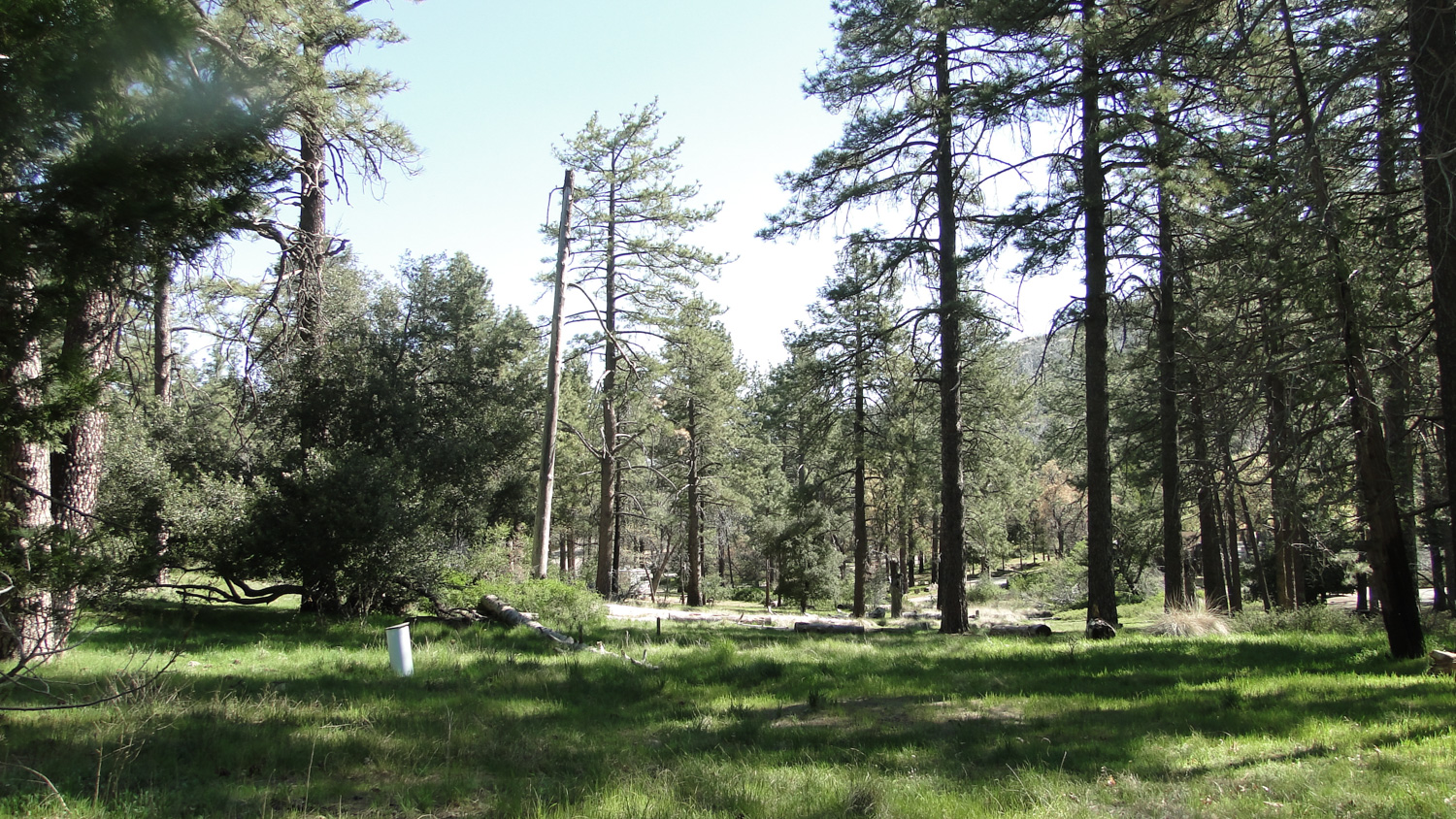 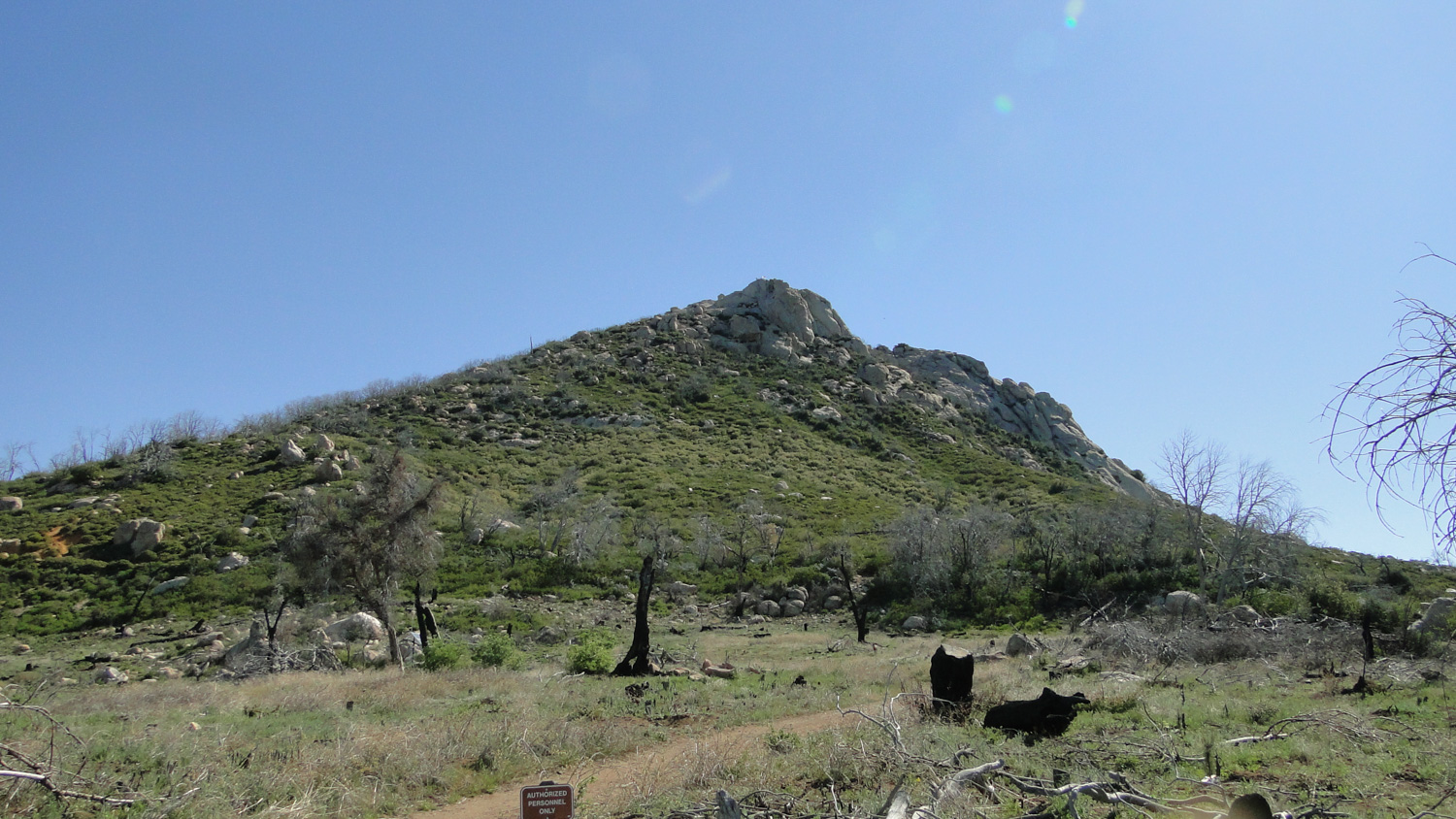 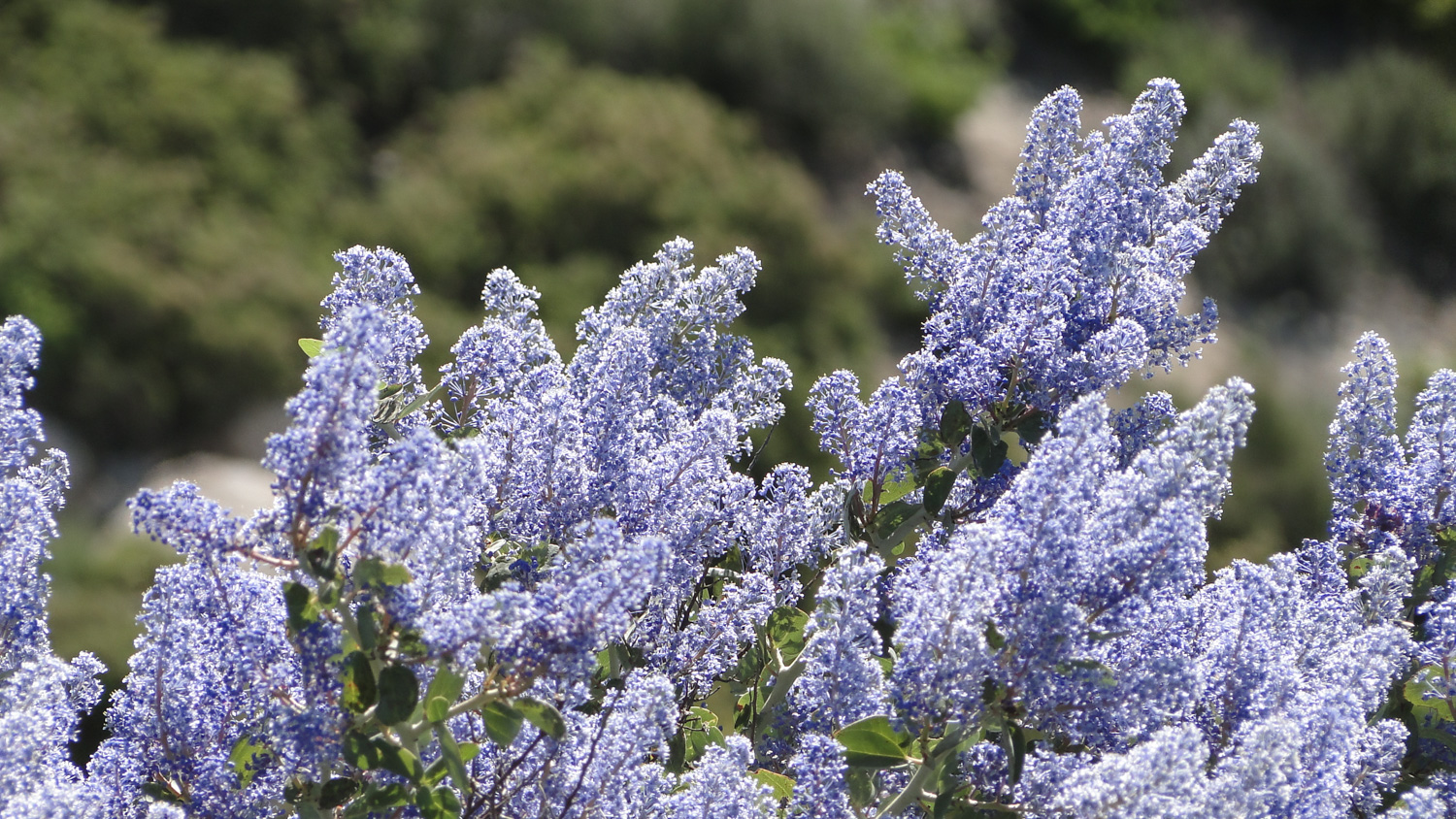 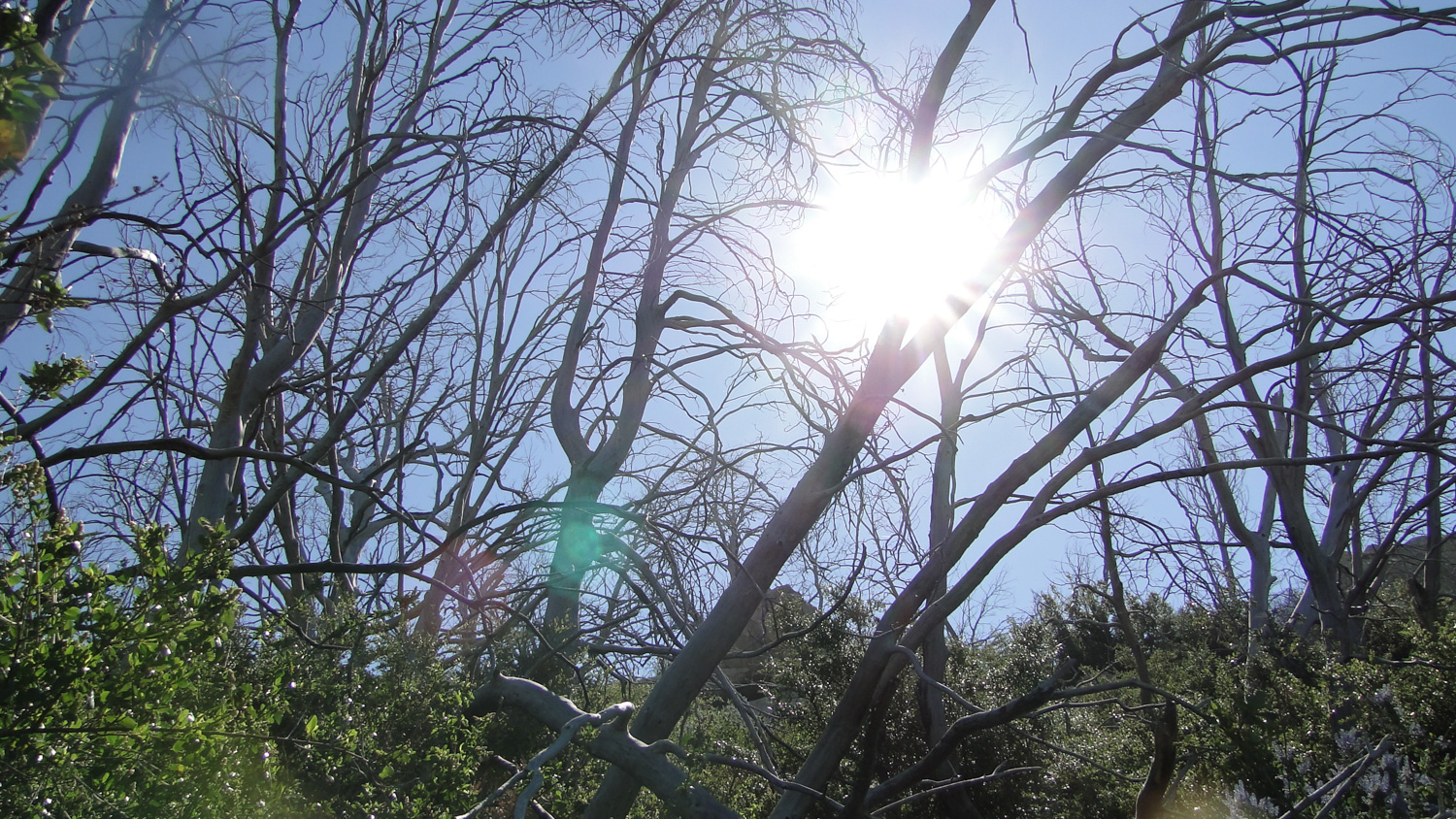 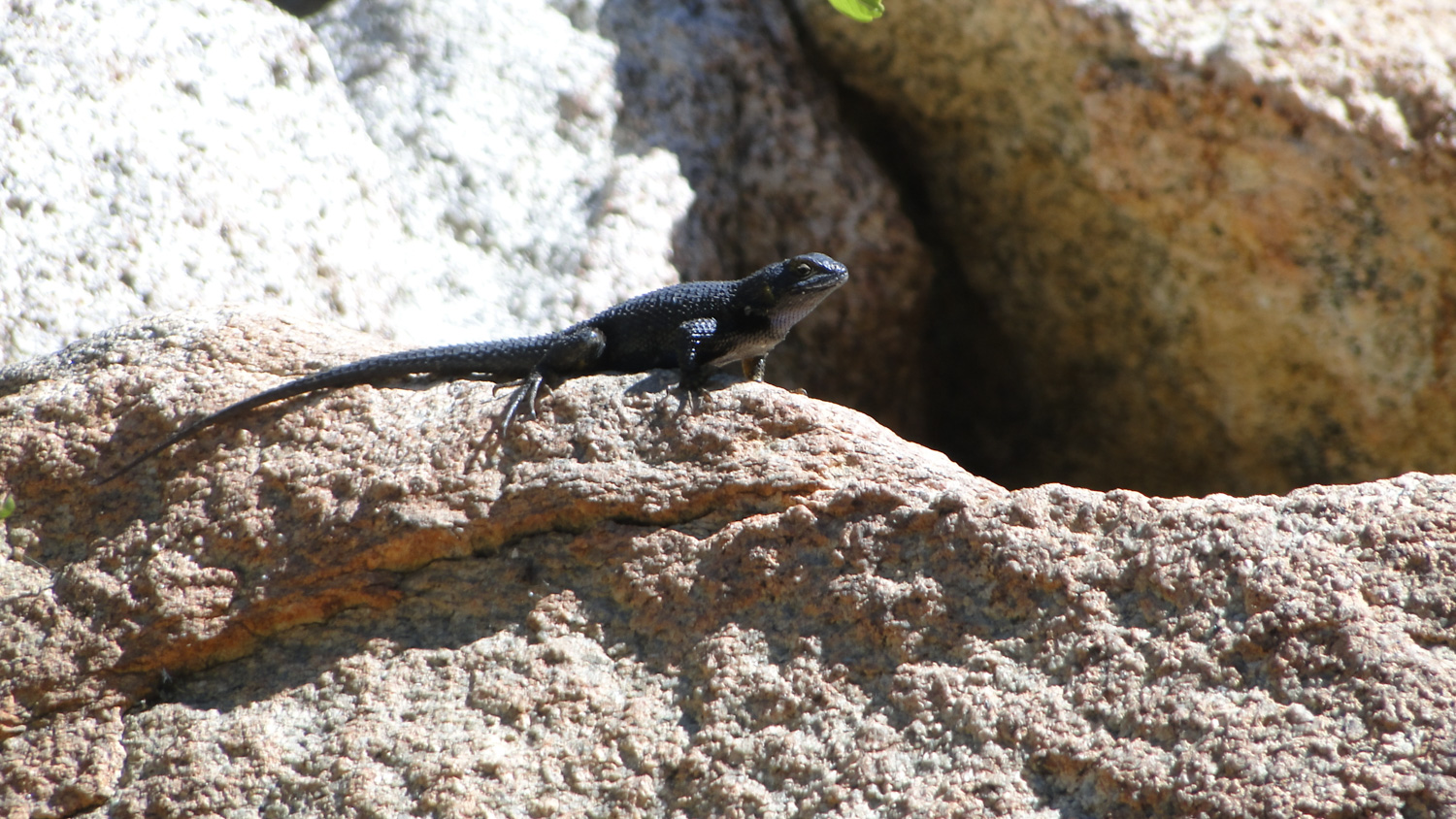 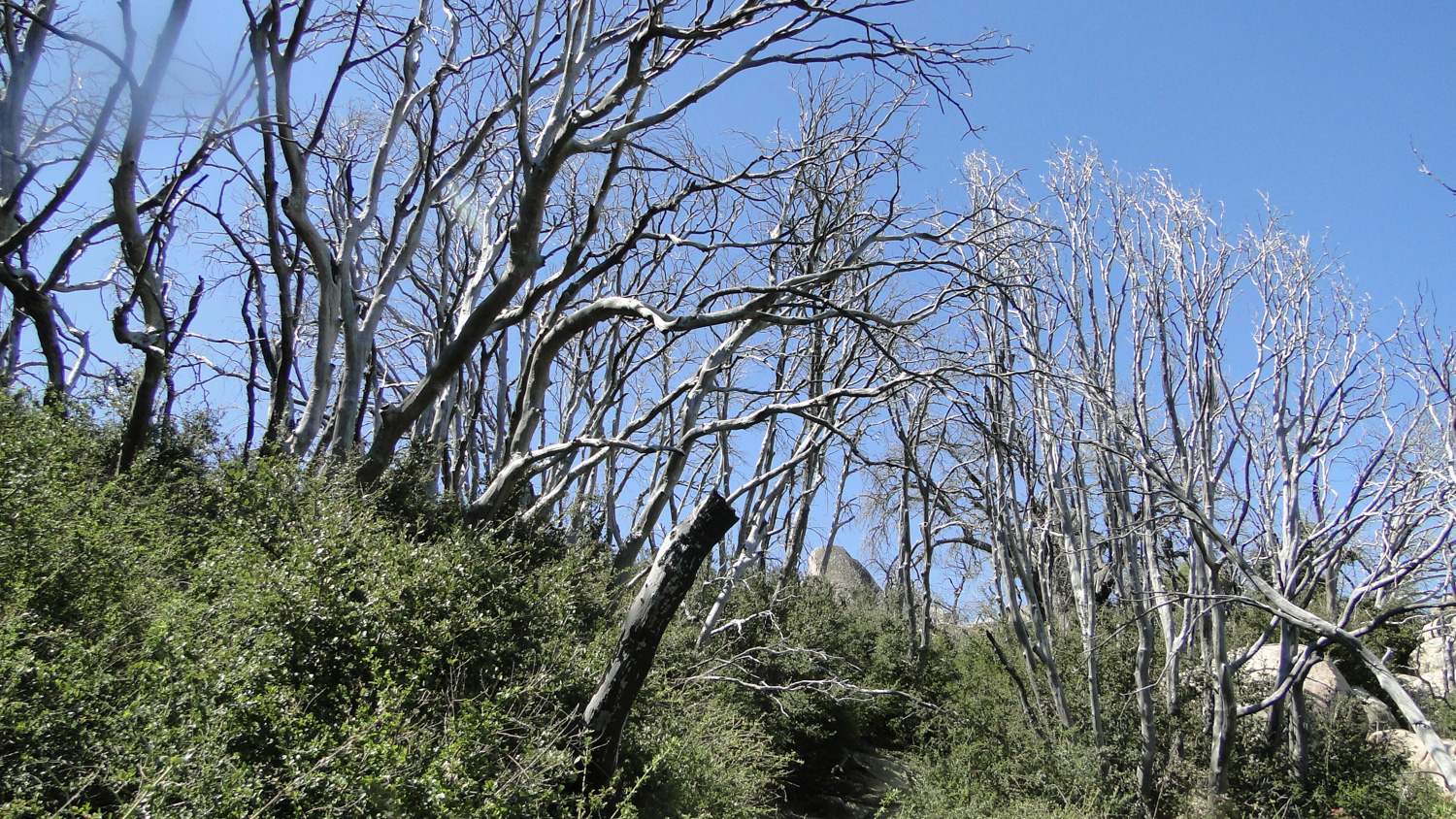 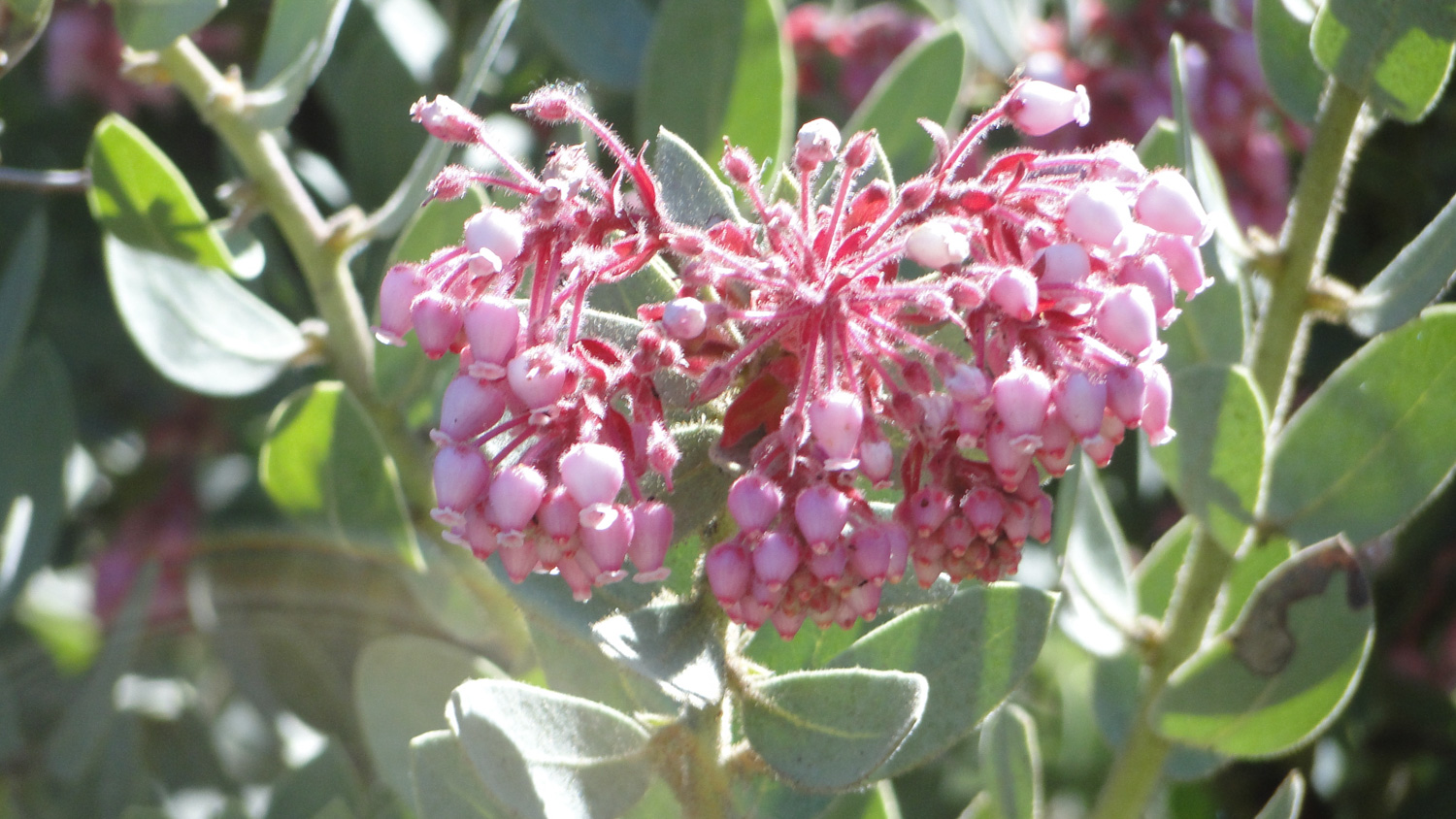 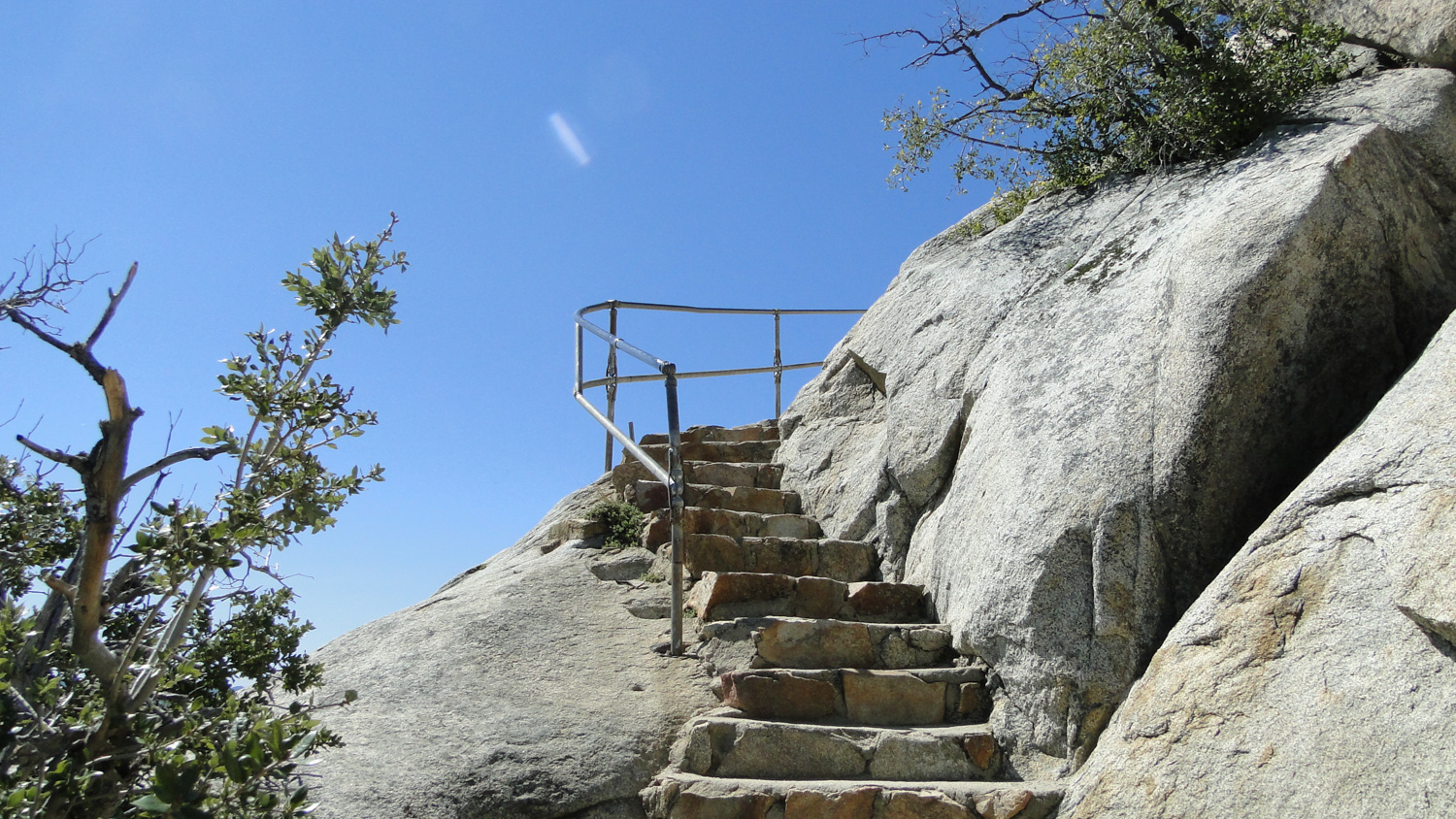 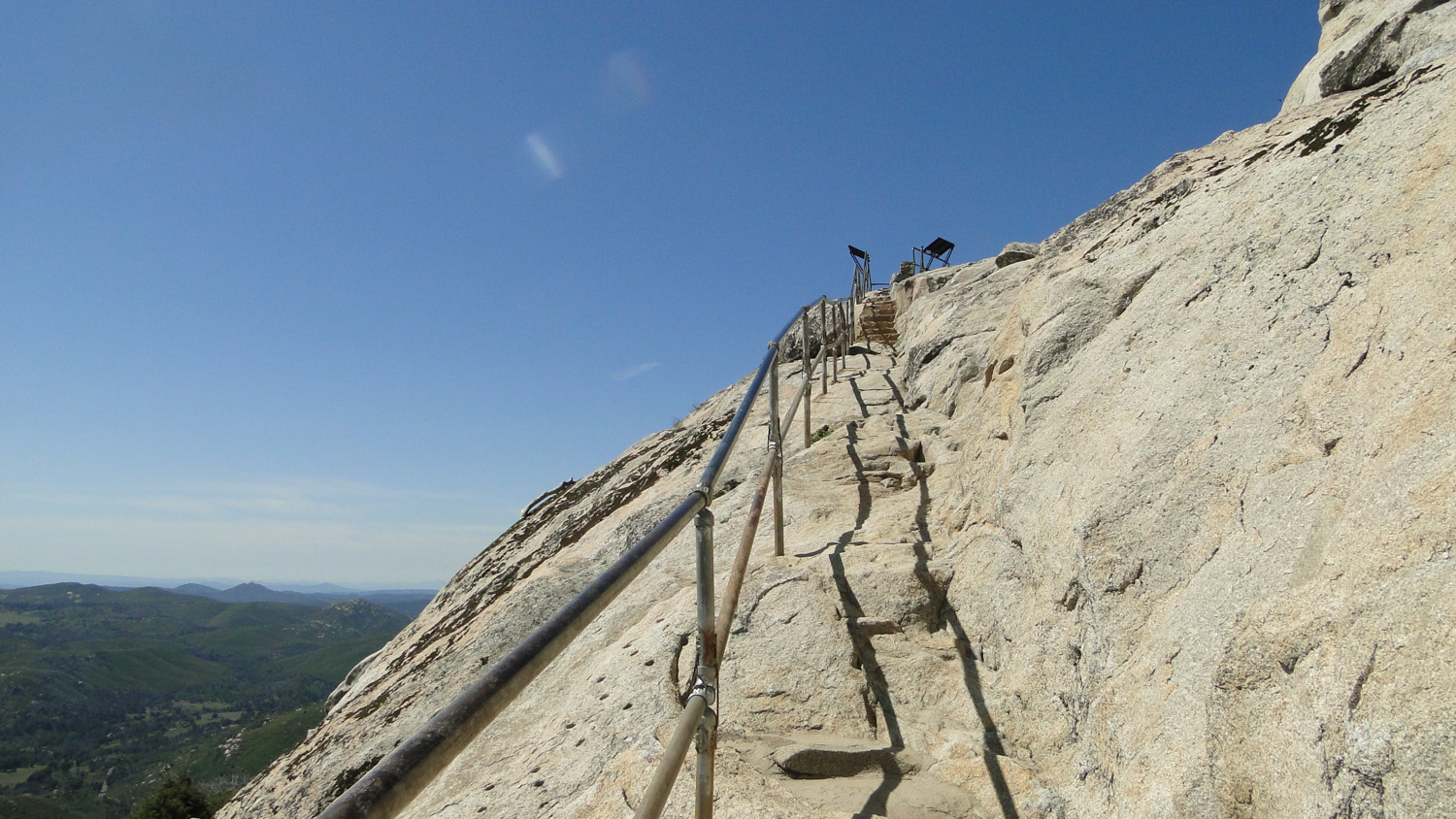 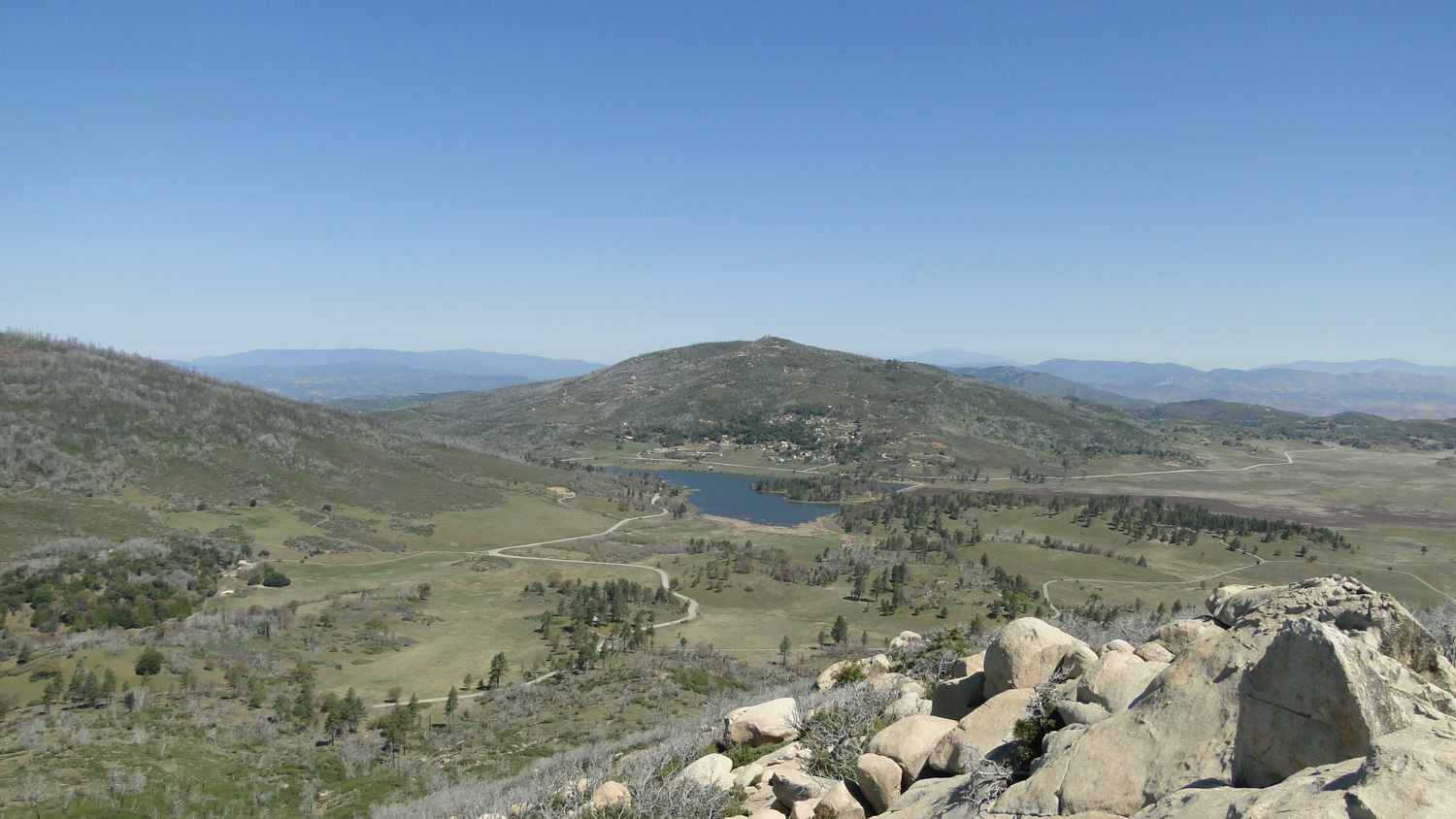 The trail is generally in good shape. There's a lot of poodle dog bush at the beginning of the trail, but it's easy to avoid. The summit gets pretty rocky, and it should not be climbed when there is snow or ice on the ground.

The campground immediately across the road from the trailhead, Paso Picacho, is a beautiful campground that makes for a great 1 to 2 night get-away.

From San Diego: Take I-8 to Highway 79 and exit left toward Descanso and Julian. Pass through Descanso and keep left at the junction for Highway 80. Turn left into Paso Picacho campground, pay the fee, and park in the day use area off to the right.