The curious moniker granted to this peak comes from a portmanteau combining the words “Oaks” and “Manzanita.” These two plant species grow in abundance on various parts of the peak, particularly on the north facing slopes. Although the 2003 Cedar Fire incinerated most of the vegetation, both the oaks (black, live, and scrub) and the manzanita have made a respectable comeback in the intervening years. 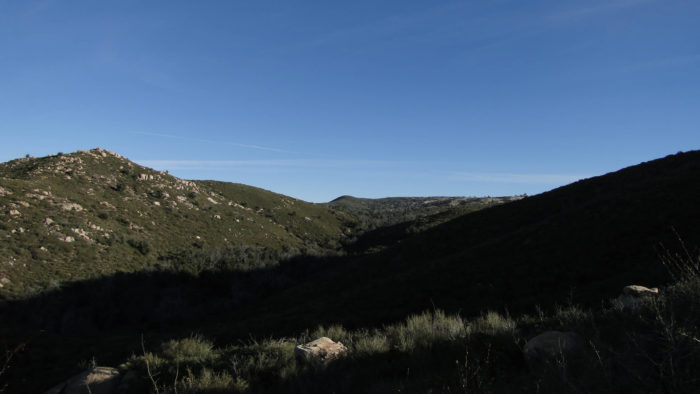 Although Oakzanita Peak appears relatively unassuming when compared to nearby Cuyamaca and Stonewall Peaks, its height and location on the southern end of Cuyamaca Rancho State Park afford impressive views. From the rocky summit, an unobstructed 180 degree views spans much of the southern third of the county stretching out across urban San Diego toward the Pacific Ocean. Partially because Oakzanita Peak flies under the radar, the path up to the top receives a bit less traffic than some of the neighboring trails in the area. 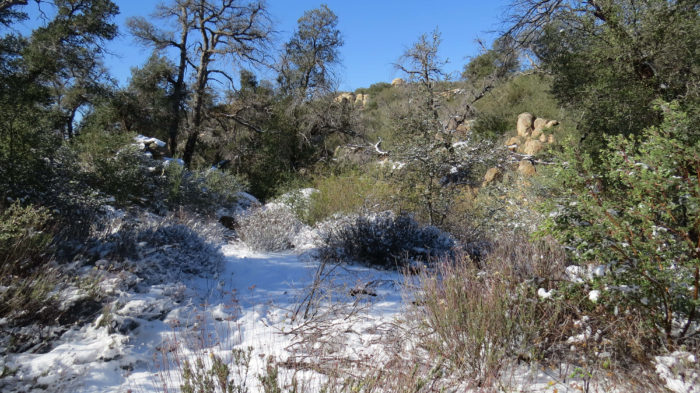 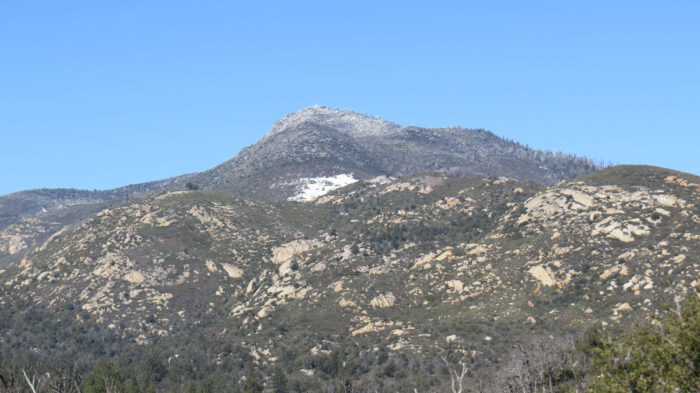 From the signed trailhead, follow the Lower Descanso Creek Trail. After a few dozen feet, keep to the right when you reach the junction with the East Side Trail. After one broad switchback and a crossing over usually dry Descanso Creek, the trail winds through the shade of coast live oaks in various stages of recovery from the Cedar Fire. 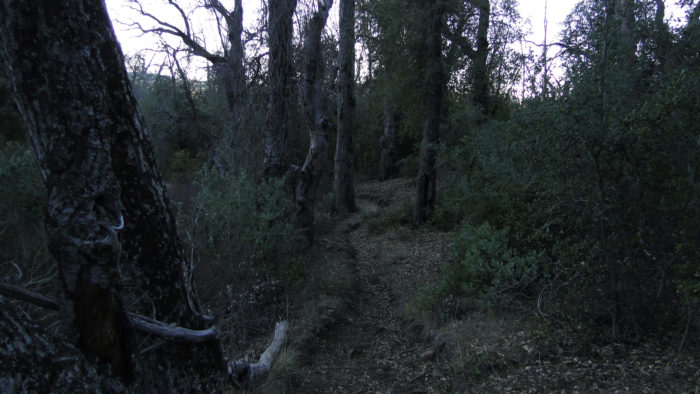 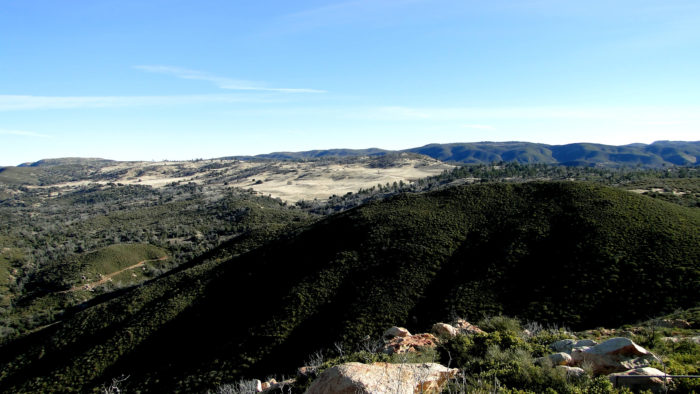 The trail follows a series of switchbacks on a moderate grade, ultimately leading to a saddle directly east from the peak. Most of the oaks grew along this section, and the fire incinerated most of them down to the ground. However, oaks possess a fire adaptation common to most Southern California chaparral/woodland species. New branches re-sprout from the roots, creating a thicket of oak branches surrounding the dead stump. In a few decades, pending any other fires, these oak branches will form new trees while the old stumps rot away. The manzanita on the trail follows the same growth pattern. Most manzanita species re-sprout from their bases in the same way that the oaks will. The combination of new manzanita growth and oak growth offers an indication that, at least in the scrub and woodland communities, fire recovery over the past two decades has been largely successful. 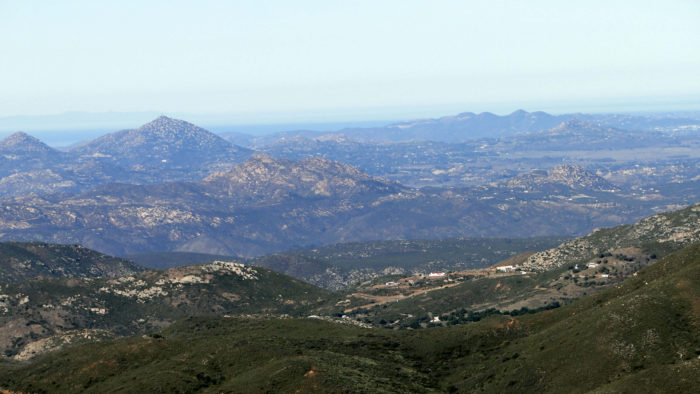 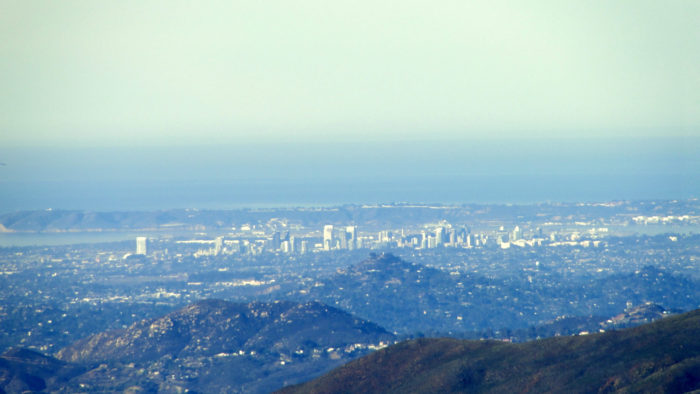 Just beyond the saddle, the trail comes to a junction with the left branch leading away to East Mesa Fire Road and the right branch leading to the peak. Keep right and follow one long switchback and several short ones over rocky terrain as you approach the peak. Several flat boulders offer good spots to snack and survey the views. All of Cuyamaca Rancho State Park unfurls to the north, and on clear days it is easy to pick out various San Diego landmarks both natural and manmade. 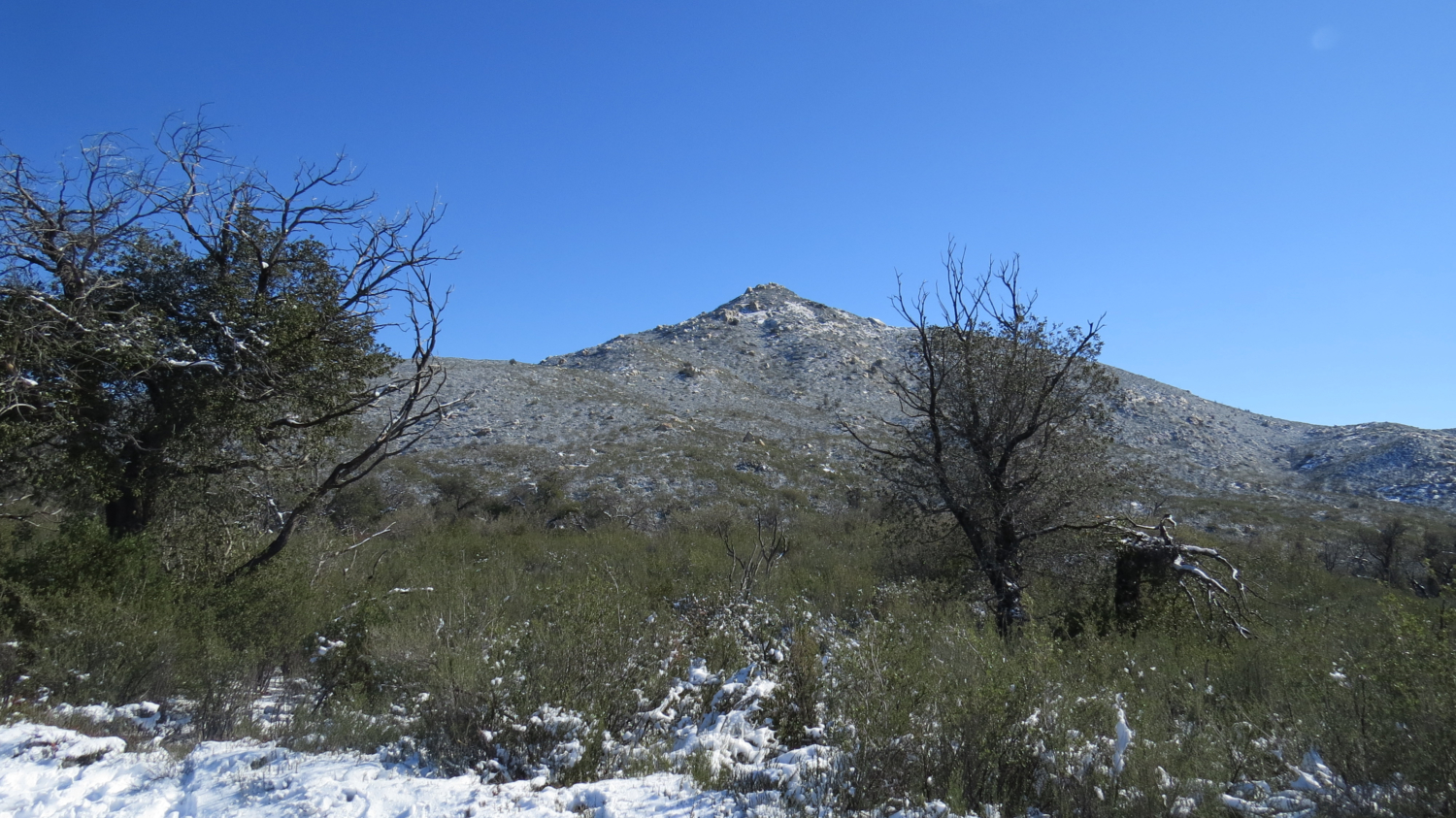 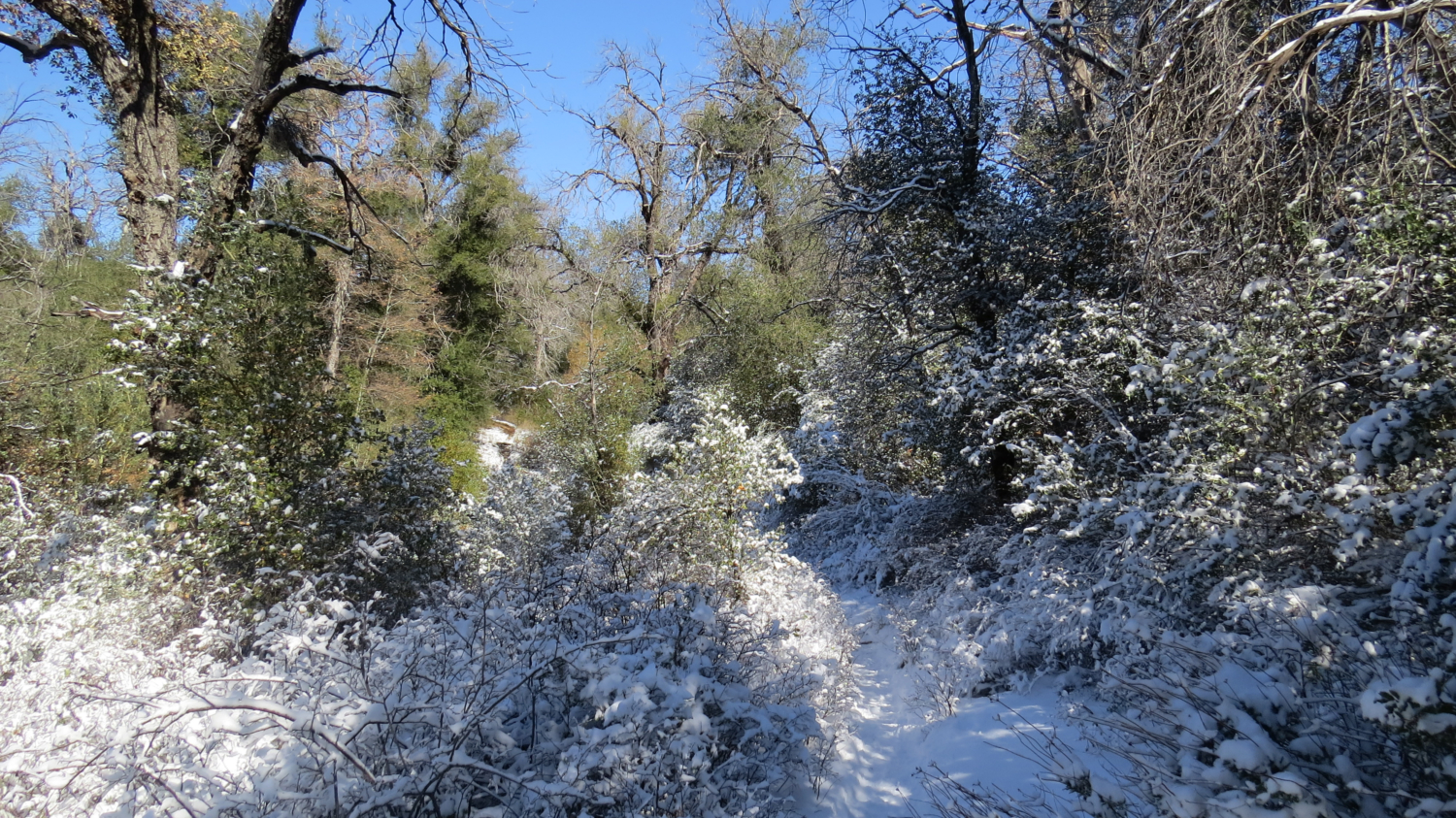 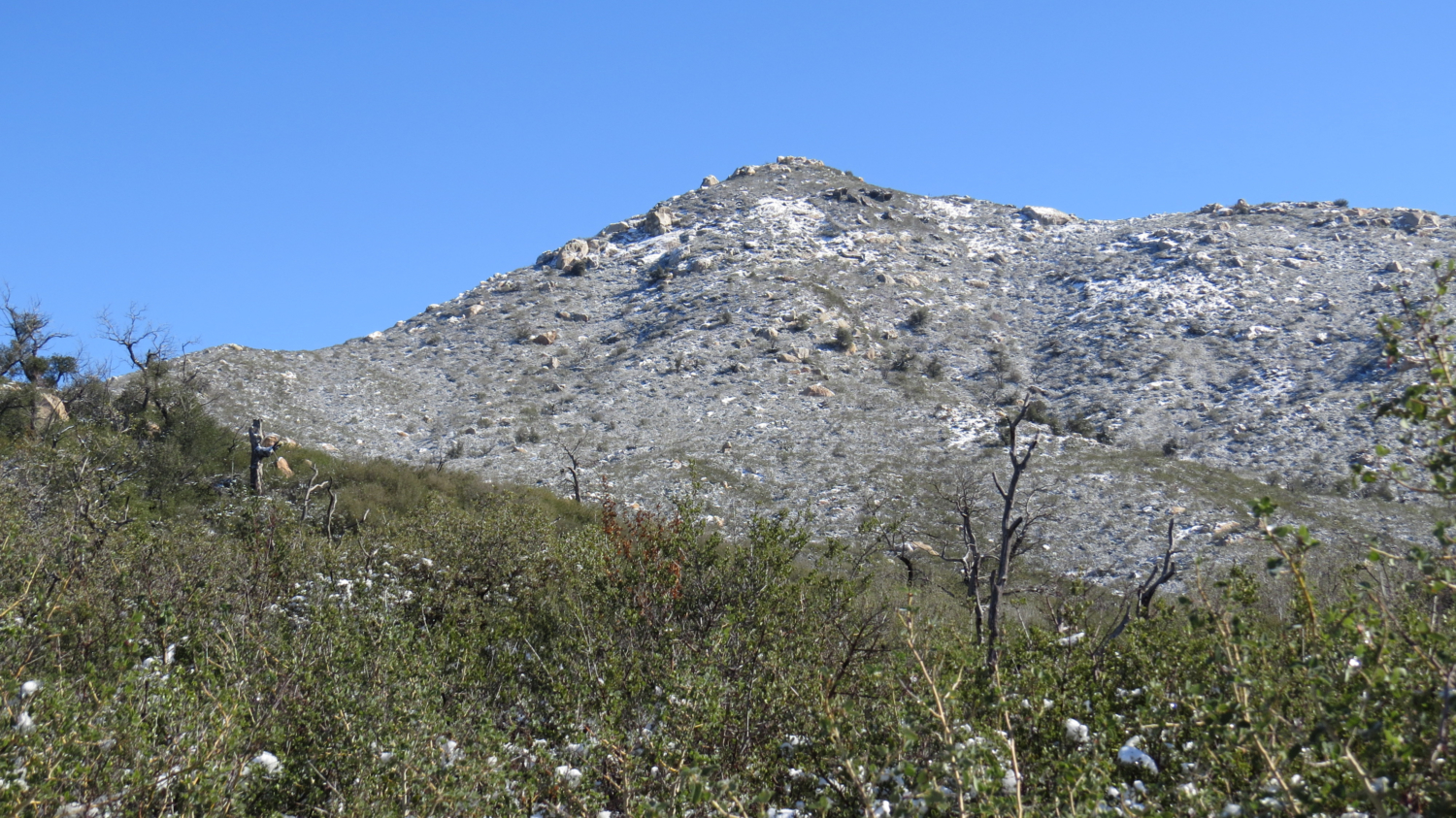 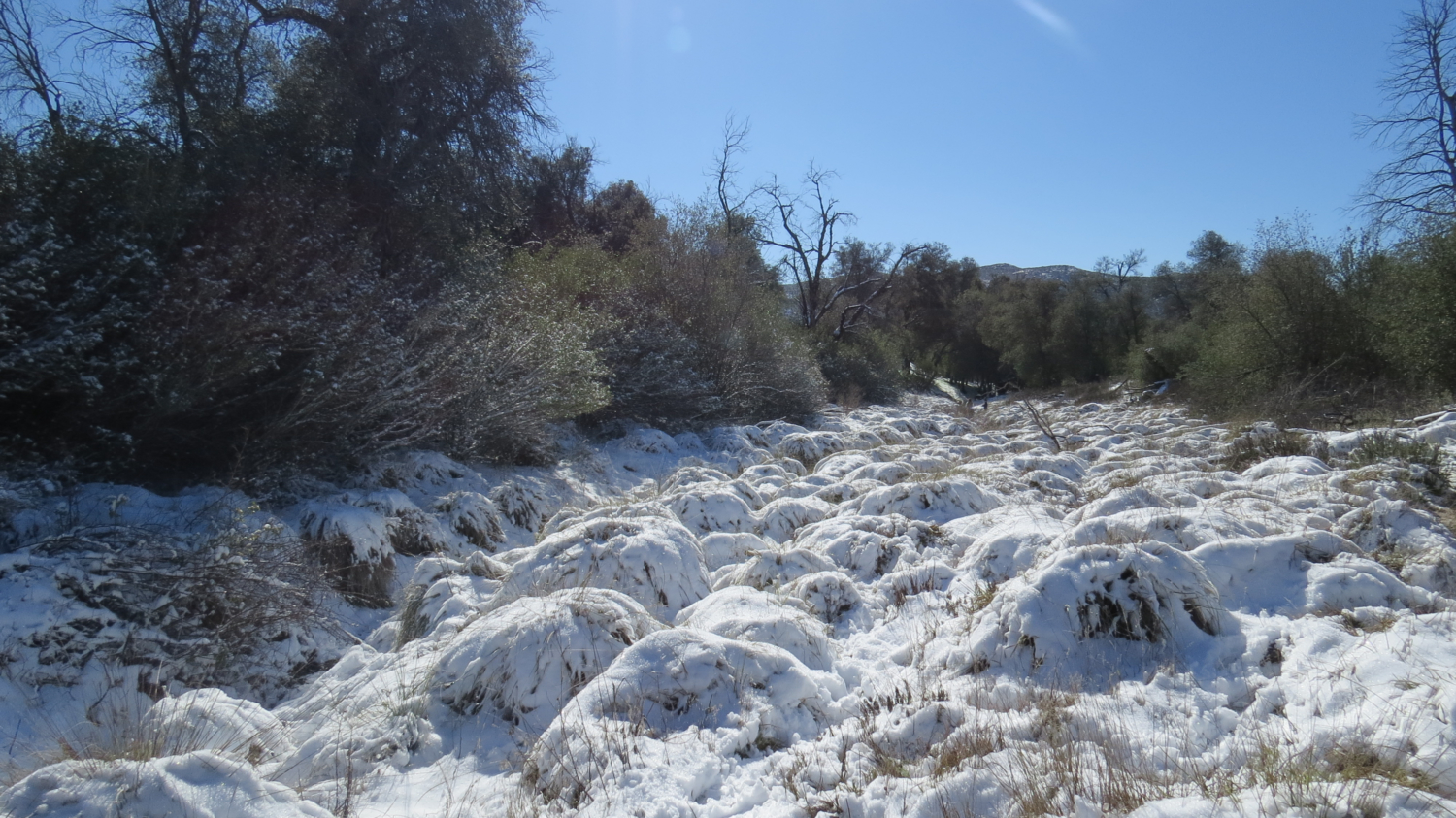 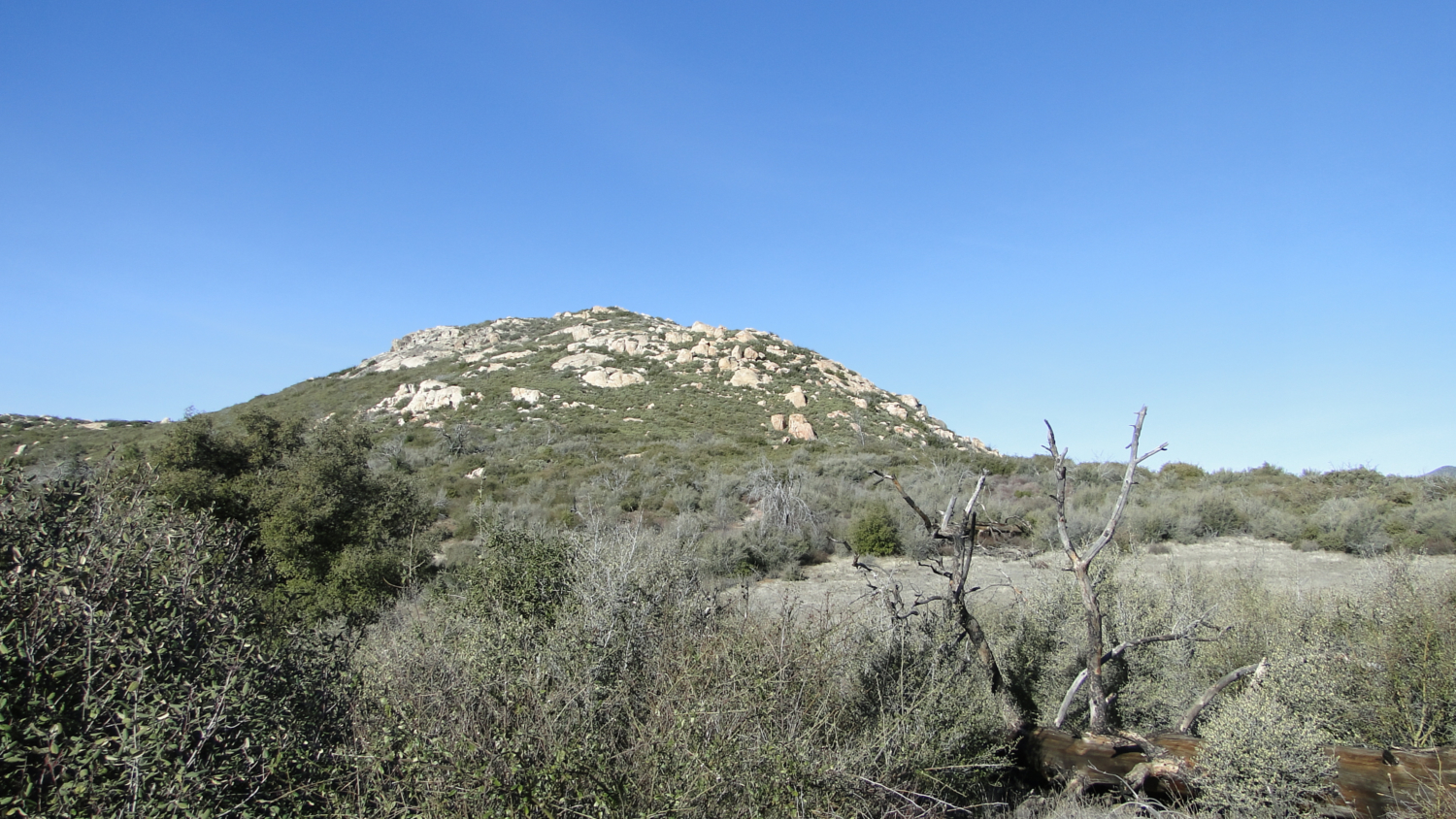 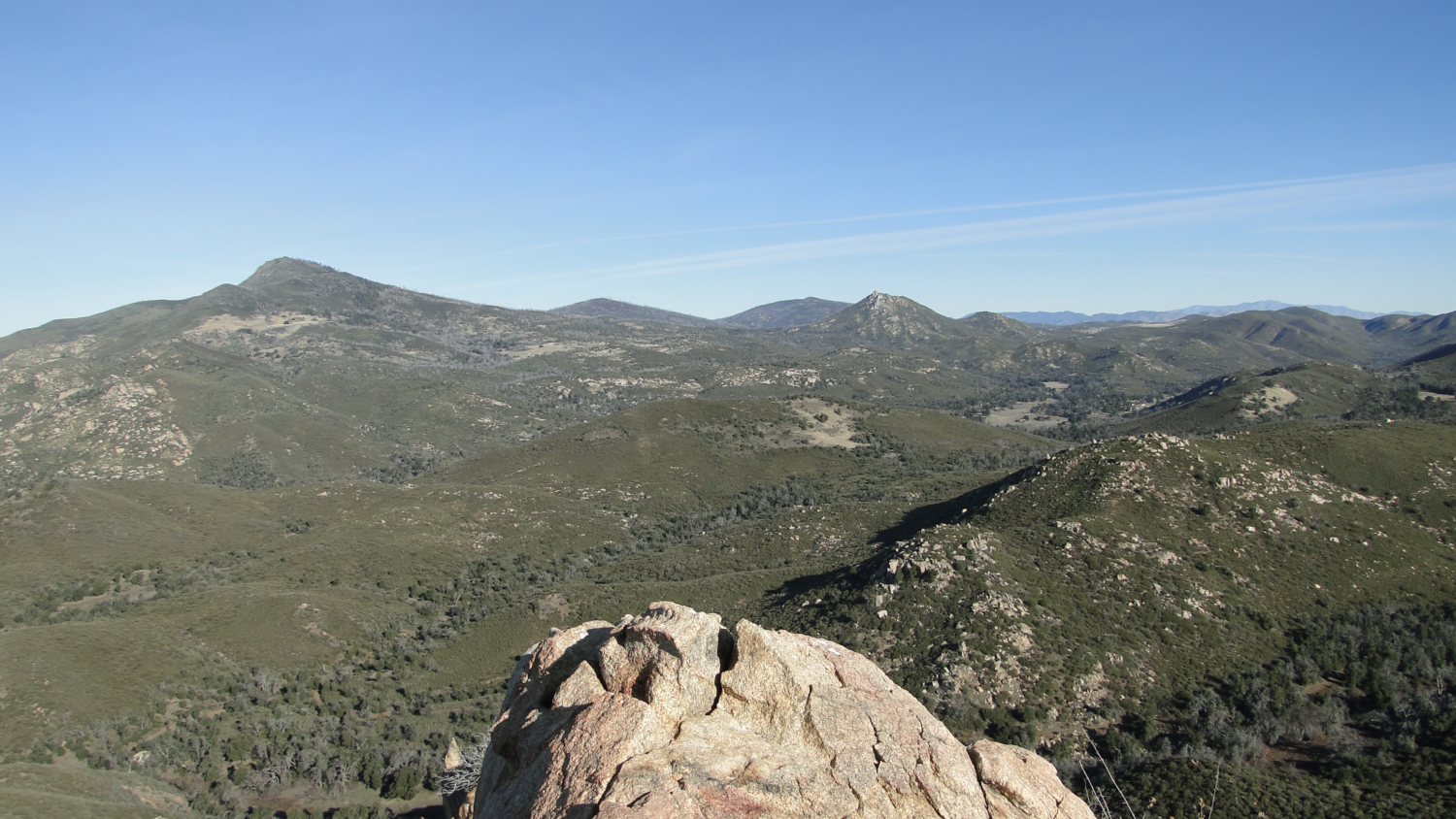 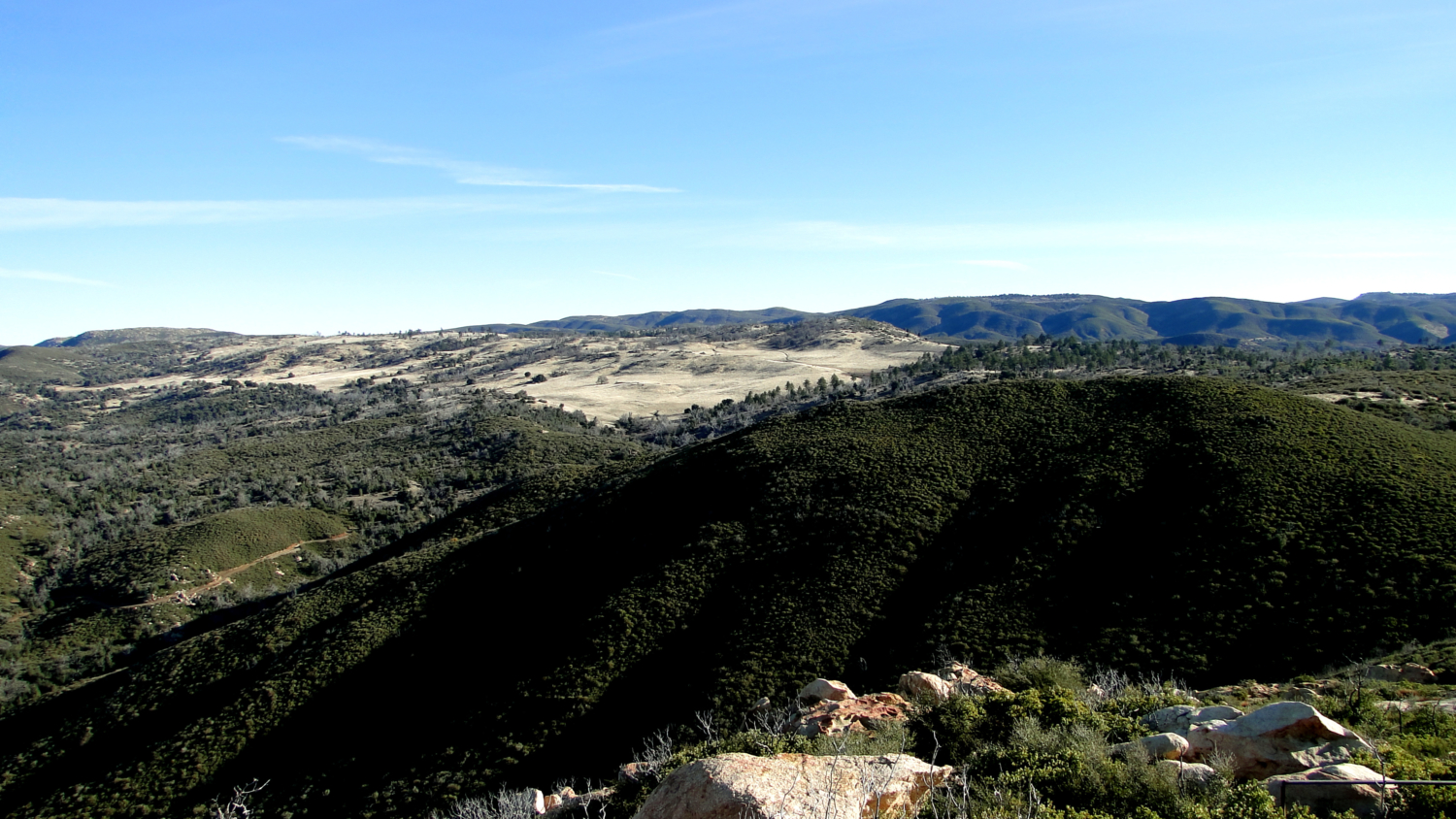 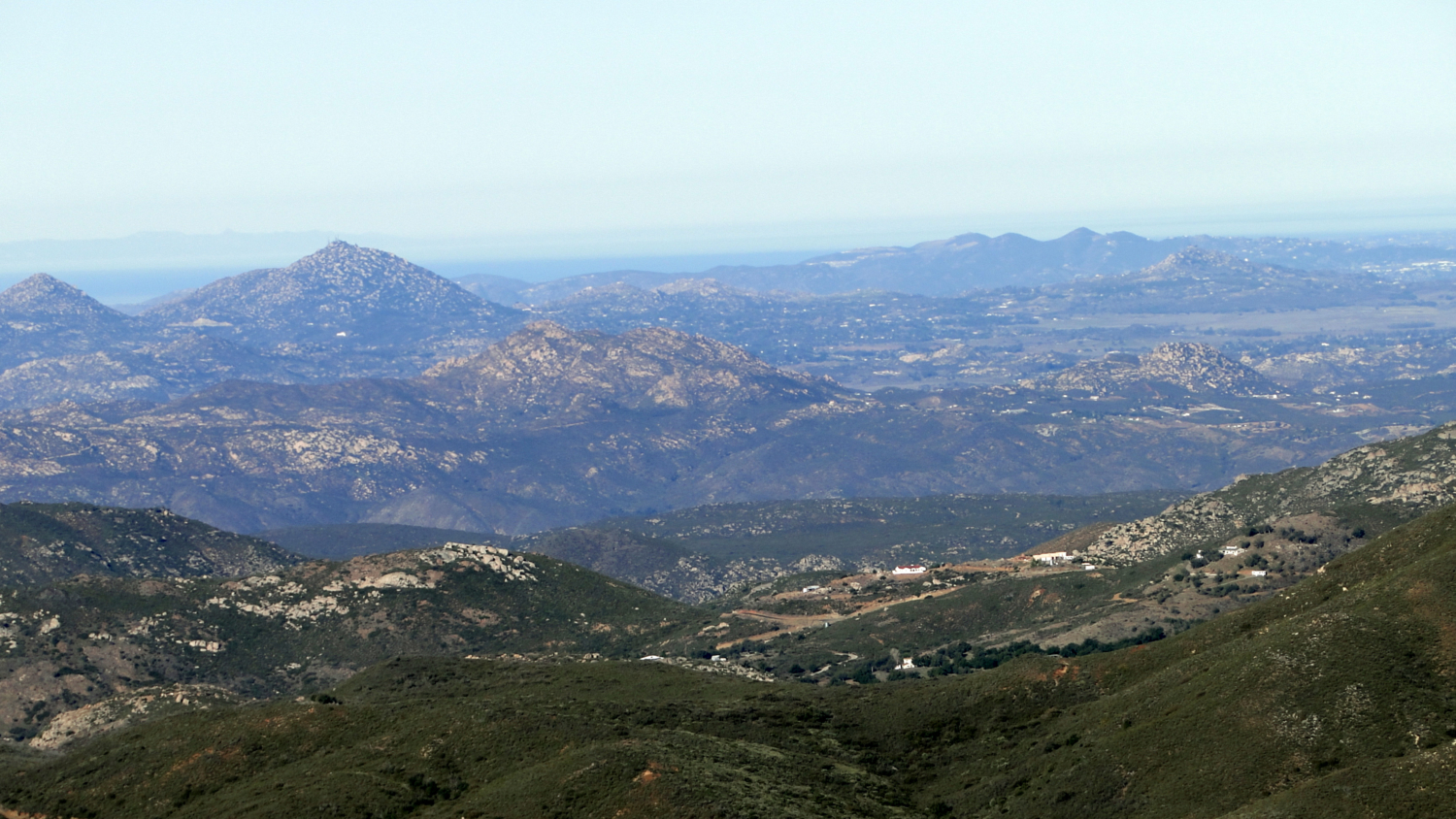 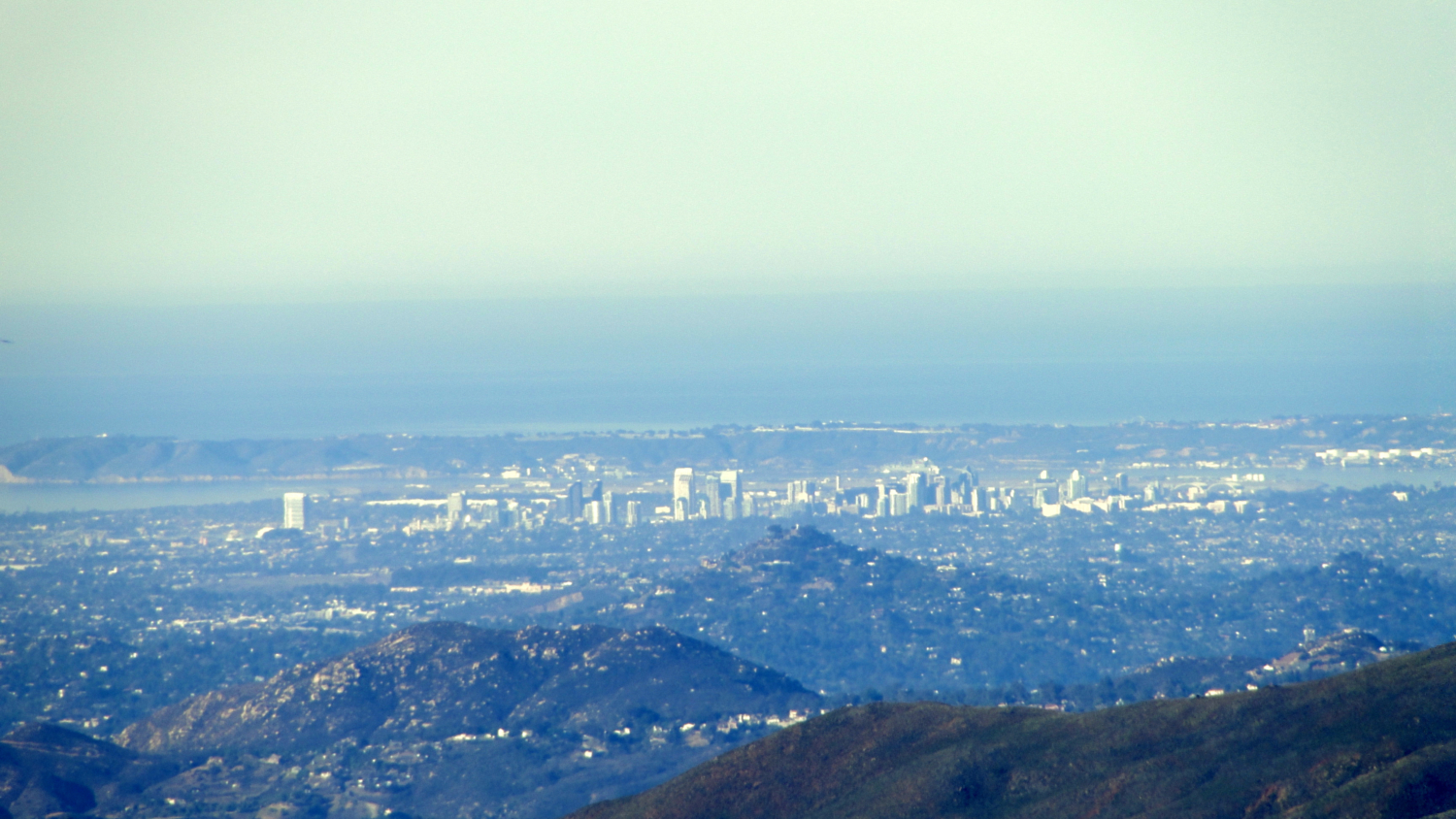 Good. There are a few parts along both branches of the Descanso Creek Trail that are a bit overgrown, but that's all from grasses and a few shrubs. The vegetation does not obscure the trail in anyway. Parts of the trail to the peak are a bit rocky, but there are no serious obstacles.

From San Diego, head east on Interestate 8 past Alpine. Exit on Highway 79 toward Cuyamaca Rancho State Park and Julian, and turn left. After 2.7 miles, turn left to stay on Highway 79. After 3.2 miles from this junction, you will arrive at the Oakzanita Trailhead on the right side of the road just past Oakzanita Ranch.