Whenever somebody asks me for a recommendation on where to go in Yosemite Valley, I usually make a list that includes the usual suspects: Half Dome, Yosemite Falls, Mirror Lake, etc. However, at the top of that list as my highest recommendation, I always highlight and underscore this rambling exploration of Cook’s Meadow and Sentinel Meadows. This hike doesn’t have the name recognition of bucket list fame of other hikes in the area, but it does have a rich collection of sites, sounds, and features that make it one of the best “bang-for-your-buck” experiences in the valley, including a trio of meadows, a side trip to Lower Yosemite Falls, beautiful flowers or fall color depending on the season, views of nearly every famous Yosemite Valley landmark, a pair of picturesque bridges, human history, and wildlife sightings. And considering you can mix and match different segments of trail to make it shorter, virtually anybody can enjoy this hike. 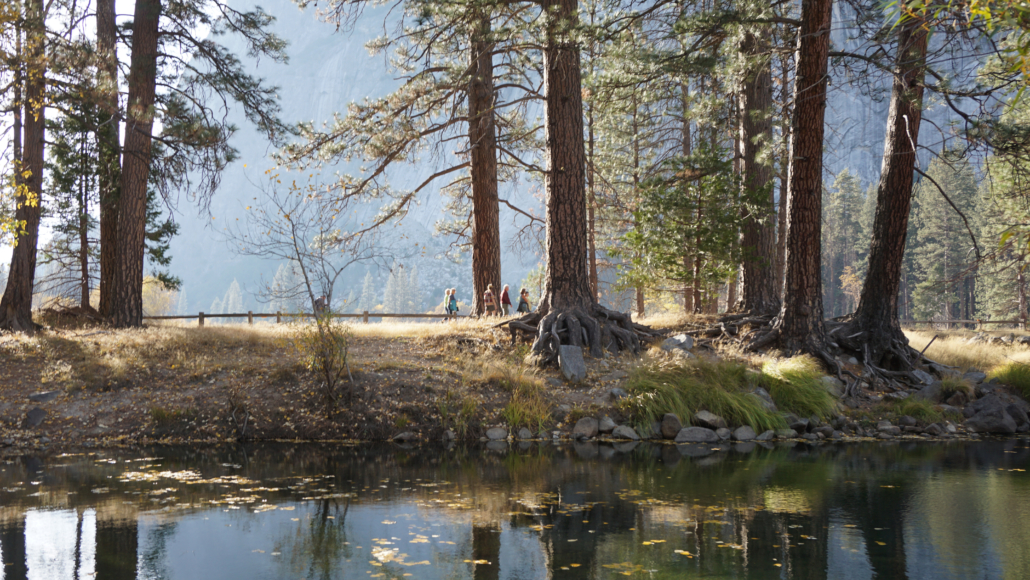 The only significant requirements for this hike are paying the park entrance fee ($35 at time of writing), which you’ll do long before you get to the trailhead.

Visitors should also note that this small parking area is frequently full, especially from 9 am to 5 pm in the spring, summer, and early fall. If you want to get a parking spot, get here early, visit during the off-season, or get here later in the day. The good news is that all of those times are optimal times to take this hike anyway, so visiting outside of peak times also means you’ll have a better hiking experience. 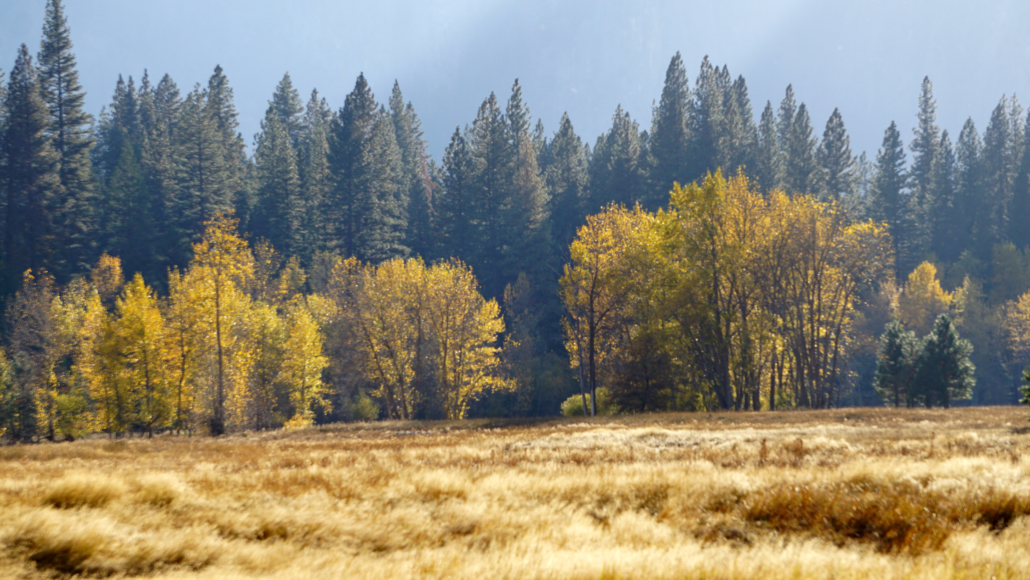 All visitors must find a way to store their food in a food storage locker. Failing to do so is an invitation to bears to break into your car and eat your food. Unfortunately, the trailhead does not have an abundance of food storage; you will have to find a creative way to ensure there’s no food in your car, such as bringing only what you can carry and keeping the rest in your tent or hotel room, or storing your food in lockers at additional trailheads and taking the shuttle to the trailhead. 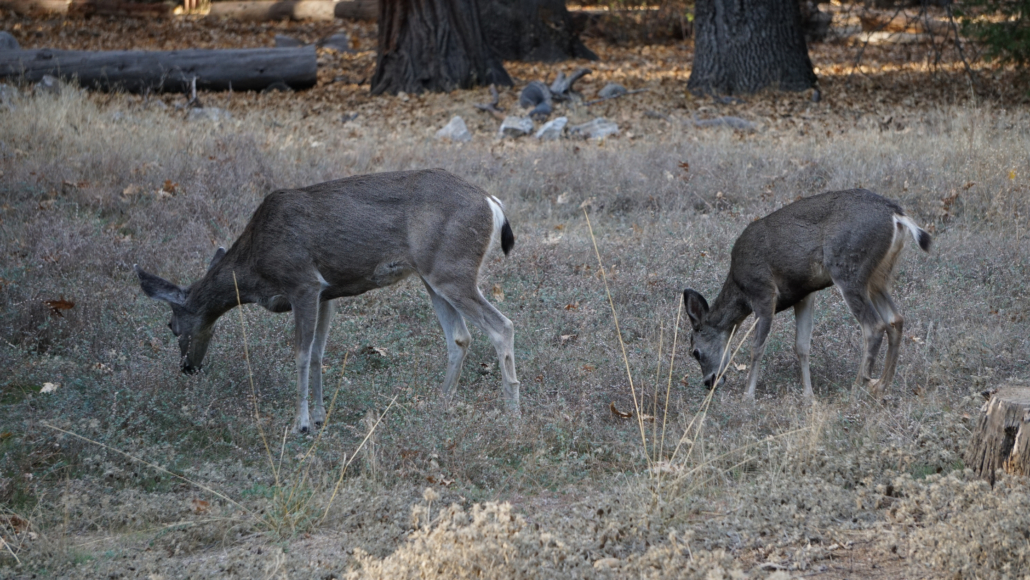 Given that the area these trails explore lie in the heart of Yosemite Valley, there’s a wealth of human history associated with the area. I will address some of the history, including John Muir’s residence when he first came to Yosemite, the Yosemite Chapel, and the bridges throughout the hike description.

Cook’s Meadow was the site of the Old Yosemite Village, which included a jail, a Wells Fargo office, a chapel (the only building still standing), lodging, photo studios, a bathhouse, and a saloon, making Cook’s Meadow the epicenter of early visitor activity in the park. All of those buildings except for the chapel have been removed and placed at the Pioneer History Museum in Wawona, but some of the planted specimens left by the early visitors, including a large sugar maple, giant sequoias, and fruit trees are still here. 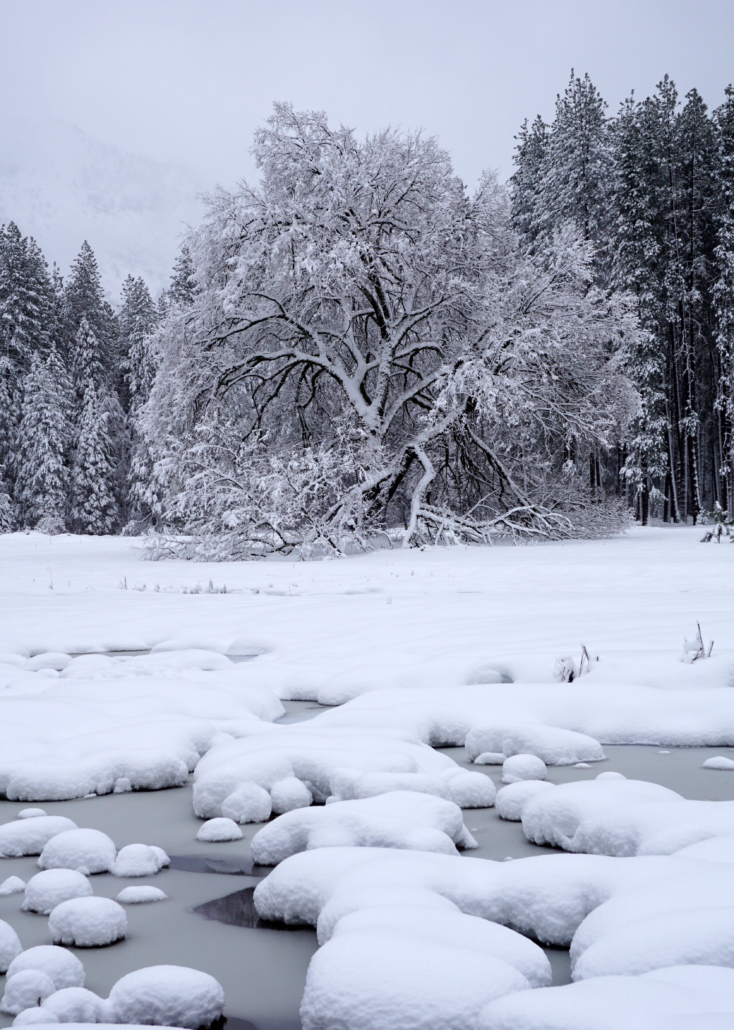 The three meadows visited on this route – Cook’s, Sentinel, and Leidig – are wetlands nourished by the combined flow of the Merced River and Yosemite Creek. The abundance of surface water creates a wetland environment supporting groves of deciduous black oaks and cottonwoods, grassy open spaces that burst with wildflowers in the spring, and desirable hunting and foraging habitats for local wildlife. The abundance of deciduous trees makes this area one of the best spots in the park for fall color, which typically peaks in late October and early November.

During spring in wet years, expect to find water everywhere, especially under several stretches of boardwalk designed to protect meadow habitat. The wide open views from the meadow also afford full looks at Yosemite Falls, the tallest and most spectacular waterfall in the park. Yosemite Falls usually exhibits peak flow anywhere from early May to mid-June, depending on the depth and extent of the previous winter’s snowpack. By fall, and occasionally even mid-summer of dry years, the flow of the falls dwindles to a whisper. During winter and fall, the flow of the falls is less predictable and often depends on the recency of rainfall or snowfall at the higher elevations. 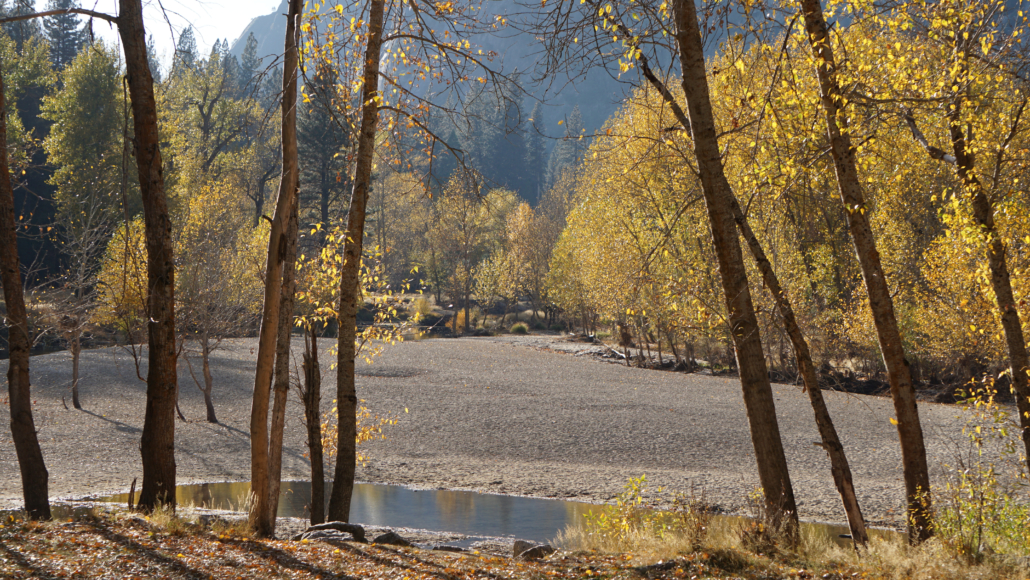 From the parking area, find the path leading north across Cook’s Meadow. This path quickly becomes a boardwalk that passes above sensitve meadow wetlands after leaving a copse of ponderosa pines. The views from this boardwalk are exceptional, including the full extent of Yosemite Falls, the Three Brothers, and about halfway across the meadow, Half Dome to east. Look for large thickets of Western azaleas that explode with fragrant, showy blossoms in June. A handful of interpretive signs line the boardwalk, dropping some knowledge about habitat and history. 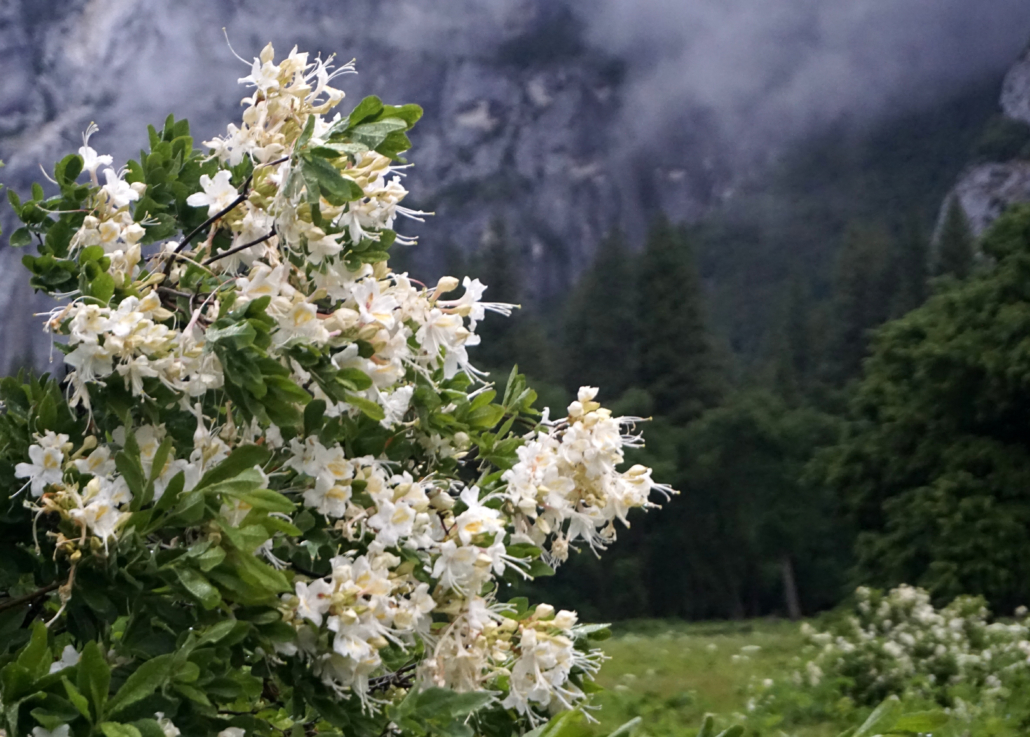 Once across the meadow, look for a dirt path leading west just before Northside Drive. Turn left to follow this path west along Southside Drive. At 0.4 mile, cross the road at the signed bus stop for the Yosemite Falls Trail. Once across the road, continue north on a paved path that connects with the looping Lower Yosemite Fall Trail. Turn left onto the Yosemite Fall Trail to take the loop counterclockwise through a forest of live oaks, incense cedar, and ponderosa pines nourished by several forks of Yosemite Creek. At 0.6 mile, look for a spur trail on the left that leads to the old home site of John Muir when he worked in the valley for John Hutchings processing timber once in a while and spending the rest of his time gallivanting through the wilderness. A view through the trees of Lower Yosemite Fall offers a few clues as to why Muir chose this spot for his abode. 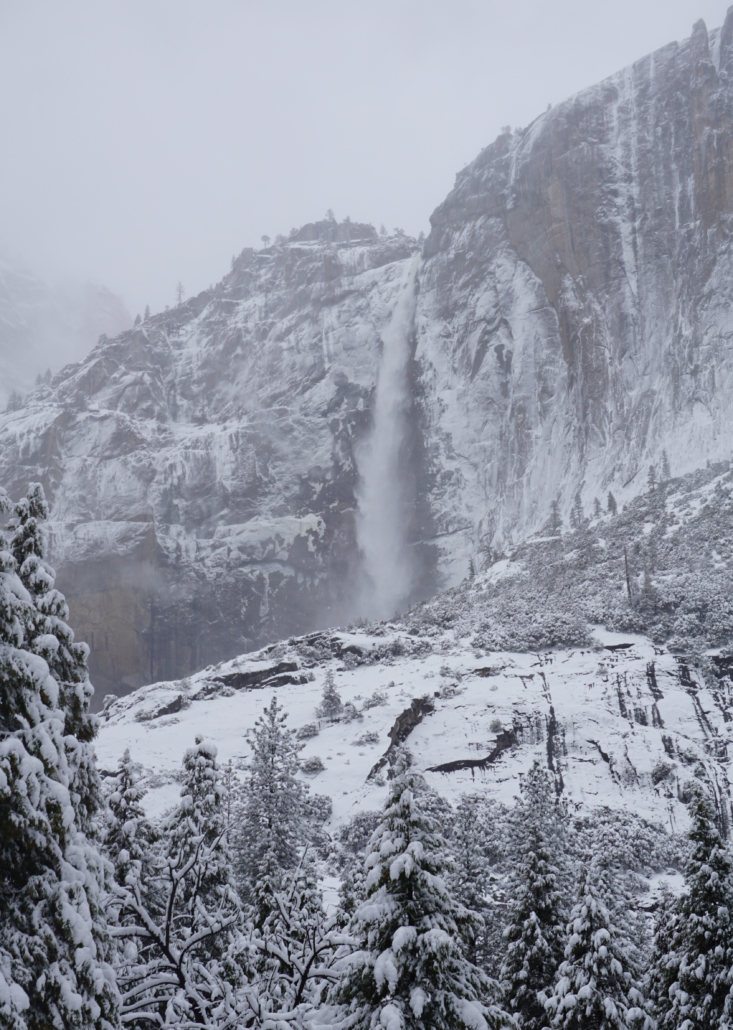 Return to the Lower Yosemite Fall Trail, and turn left. Keep left again at a junction with the Valley Loop Trail (0.9 mile). The paved trail now arcs to the west, skirting the base of Yosemite Point several thousand feet above. The trail reaches a bridge spanning Yosemite Creek just in front of Lower Yosemite Fall (1.1 miles), which either roars or whispers, depending on the season. I urge you to avoid entering the water or climbing on the rocks; the prodigious spray from the falls makes everything wet here, which means that scrambling on the rocks can lead to injuries, or even fatal falls. 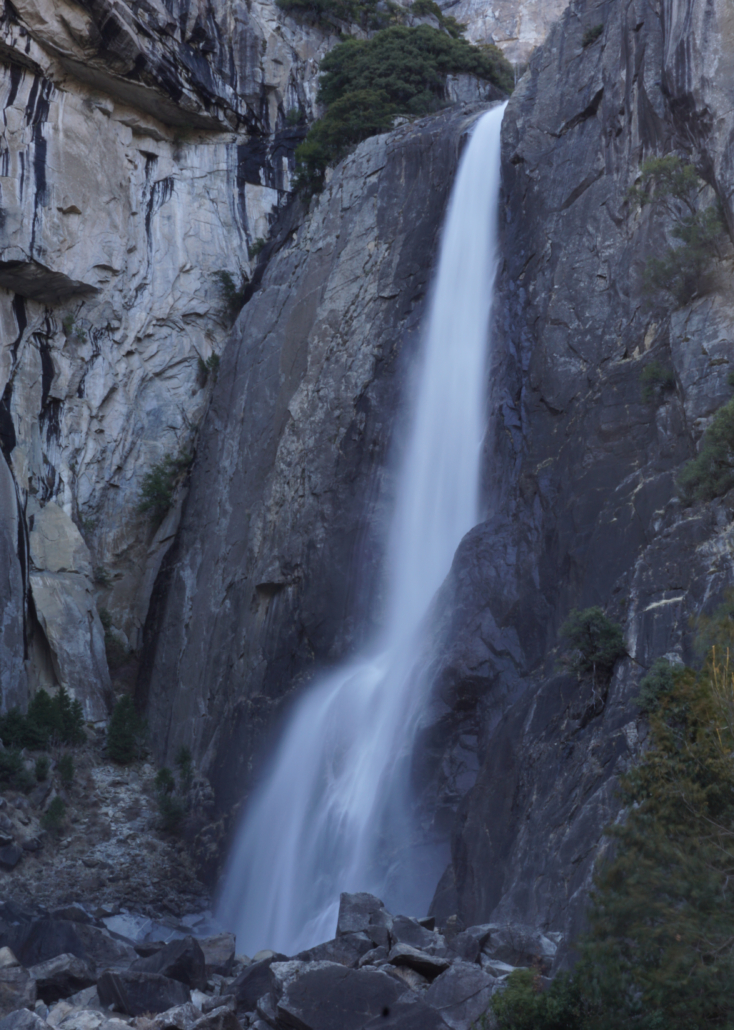 After enjoying the fall, continue counterclockwise on the Yosemite Fall Trail, heading south past an interpretive display modeling the fall and Yosemite Valley in relief (1.3 miles). The loop closes a short distance beyond the display. Turn left at a T-junction, and then left again shortly thereafter to cross Yosemite Creek via bridges to return to the starting point of the loop just north of Southside Road. Turn right when you reach the bus stop, and cross Northhside Drive to return to Cook’s Meadow. Instead of backtracking to the boardwalk, continue south along Cooks Meadow on a paved trail that skirts the west side of the meadow. The views of Half Dome are once again outstanding. 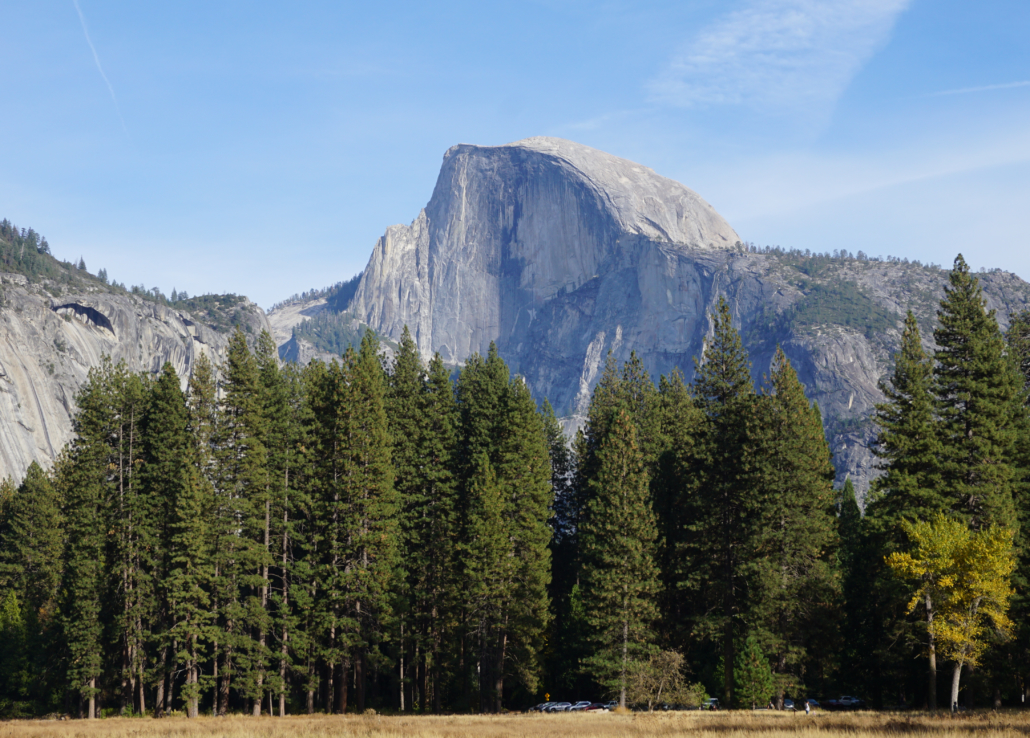 At 1.7 miles, continue straight past a junction with a trail leading back to your starting point. Shortly beyond this junction, the trail reaches the Superintendents Bridge, which spans the Merced River and features beautiful views up-river and down-river. If you’re visiting during the fall, some of the best fall color, courtesy of black cottonwoods, box elders, dogwoods, and black oaks. Once on the other side of the bridge, the trail reaches a trail leading west along the banks of the Merced. The dominant landform and namesake of the meadow, a free-standing pillar of granite known as Sentinel Rock, lies to the south, while luxurious groves of cottonwoods hug the river to the right. 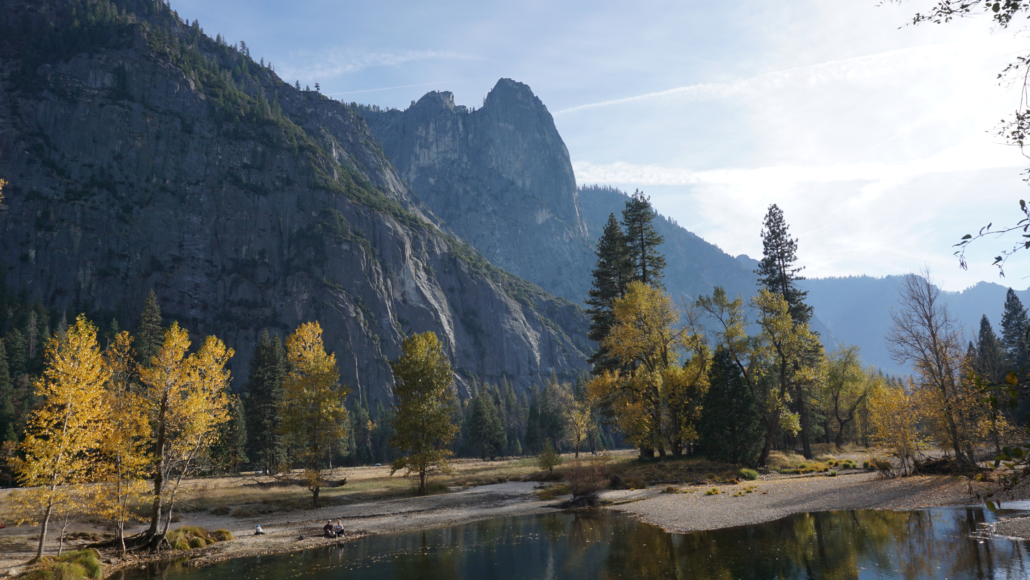 Continue straight at the boardwalk at 2.1 miles, and continue straight again on a spur trail at the end of the boardwalk that follows the river for another 0.2 mile to a sandy beach at a bend in the Merced River. This roughly halfway point is a fine spot to stop and dip your toes in the Merced – or, if the river level is low enough as it is in late summer, you could even go for a dip or a swim. Mind the strength of the current though, as even in summer, the current is capable of sweeping people away. 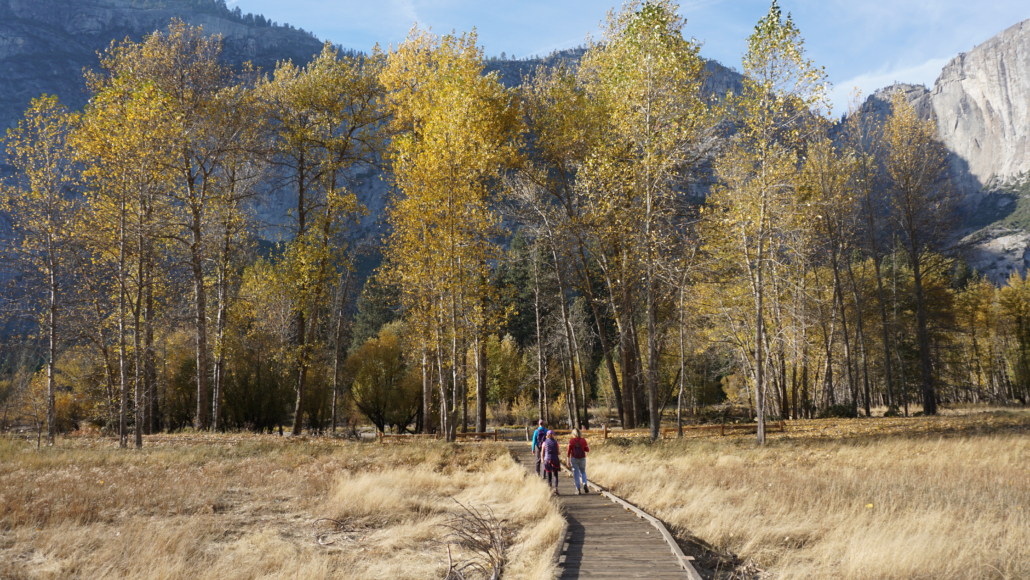 Backtrack on the spur trail to the boardwalk. Turn right to follow the boardwalk to Southside Drive, then turn right onto the Bike Path. Follow the Bike Path west to the Swinging Bridge at 2.8 miles. This famous bridge doesn’t actually swing; the original did, but it has long since been replaced by a concrete and stone structure. However, the views from this spot toward Yosemite Falls are among some of the most famous and oft-photographed in the valley. Continue across the bridge a short ways along a paved path that skirts the eastern edge of Leidig Meadow. This path ultimately leads to the Yosemite Lodge, so you don’t want to follow it all the way. However, just a short walk along this path reveals some fine views across Leidig Meadow, which rounds out the trifecta of beautiful Yosemite Valley Meadows. 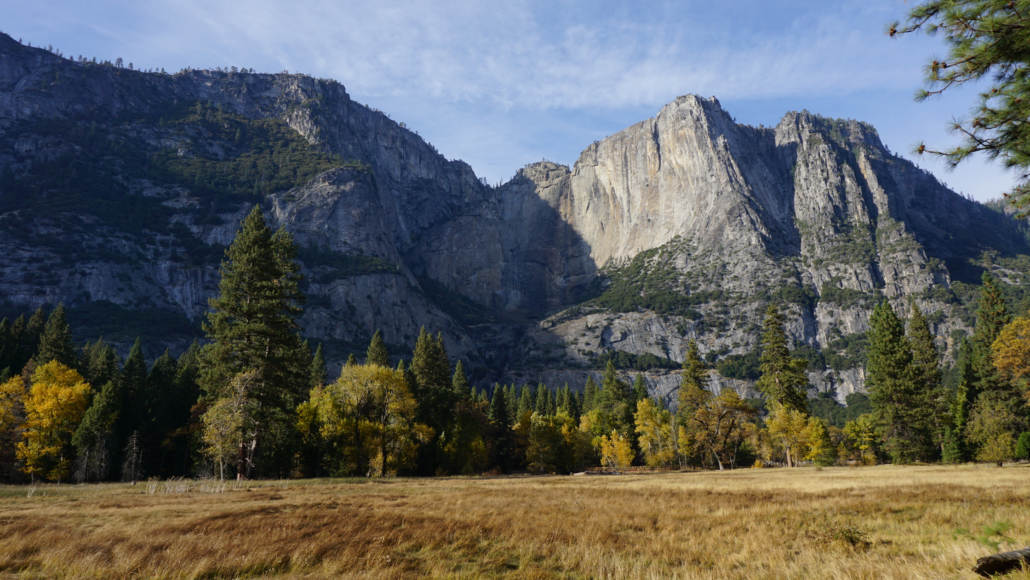 To begin the final leg of the hike, cross the Swinging Bridge again and continue south across Southside Drive. Follow the connector trail further south to a junction with the Valley Loop Trail. Turn left onto the Valley Loop Trail and follow it east through a cathedral-like corridor of ponderosa pines, black oaks, and incense cedars. Turn left on a trail leading north to the Superintendents Bridge at 3.6 miles. Shortly beyond the junction, look for the Yosemite Chapel, the only building still standing from the Old Yosemite Village. This structure still hosts services and the occasional wedding, and the chapel’s rustic structure set against stately oaks and towering granite also makes for a compelling photo opportunity. 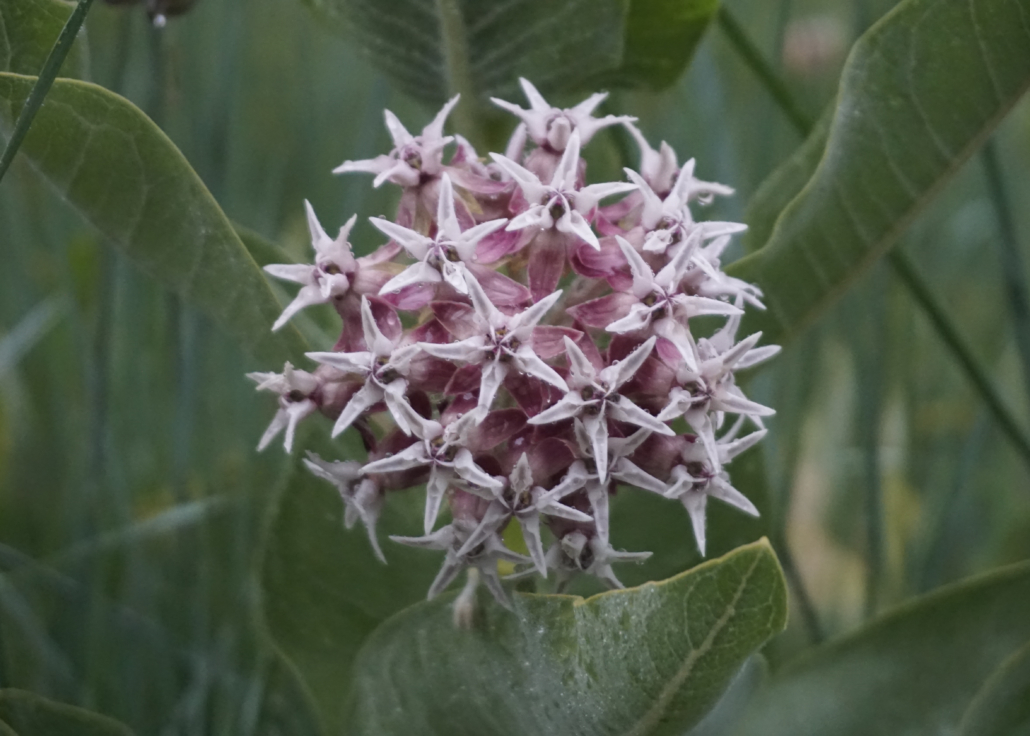 After admiring the chapel, cross Southside Drive and continue north across the Superintendents Bridge. Beyond the bridge, turn right at a junction at 3.9 miles to follow a boardwalk back to the trailhead and parking area. Look for showy milkweed blossoming at the end of summer. This spectacular blooming plant is a primary food source for monarch butterflies migrating through the valley. At 4 miles, the trail ends just west of where it begins. Either return to your car or hop on the shuttle to head off to your next destination. 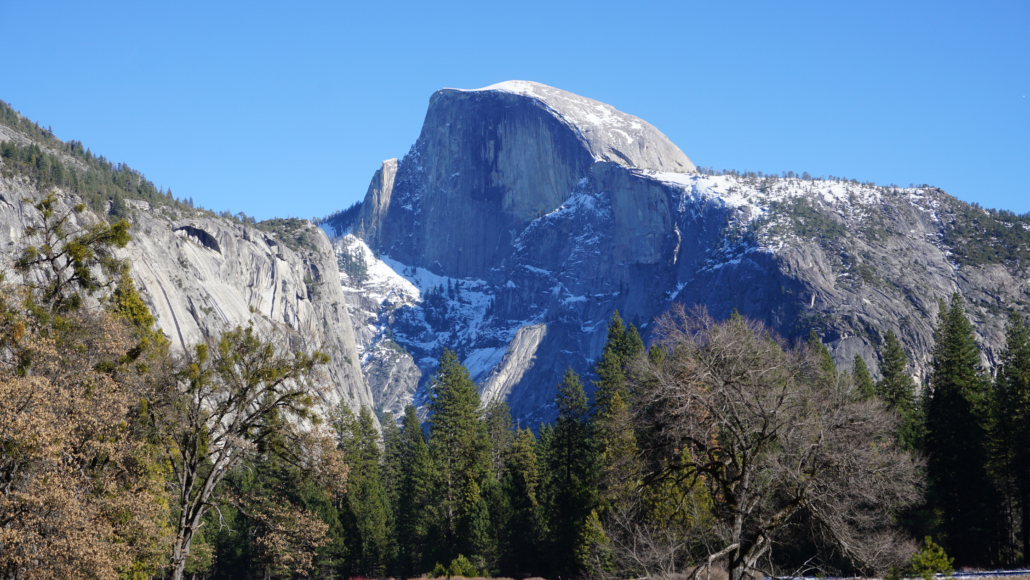 Excellent. A mix of boarwalk, sidewalk, bike path, and single-track trails. The route is a bit free-form, but this is an excellent place to wander, even if you go off track.

Upper Pines is the closest campground that accepts reservations