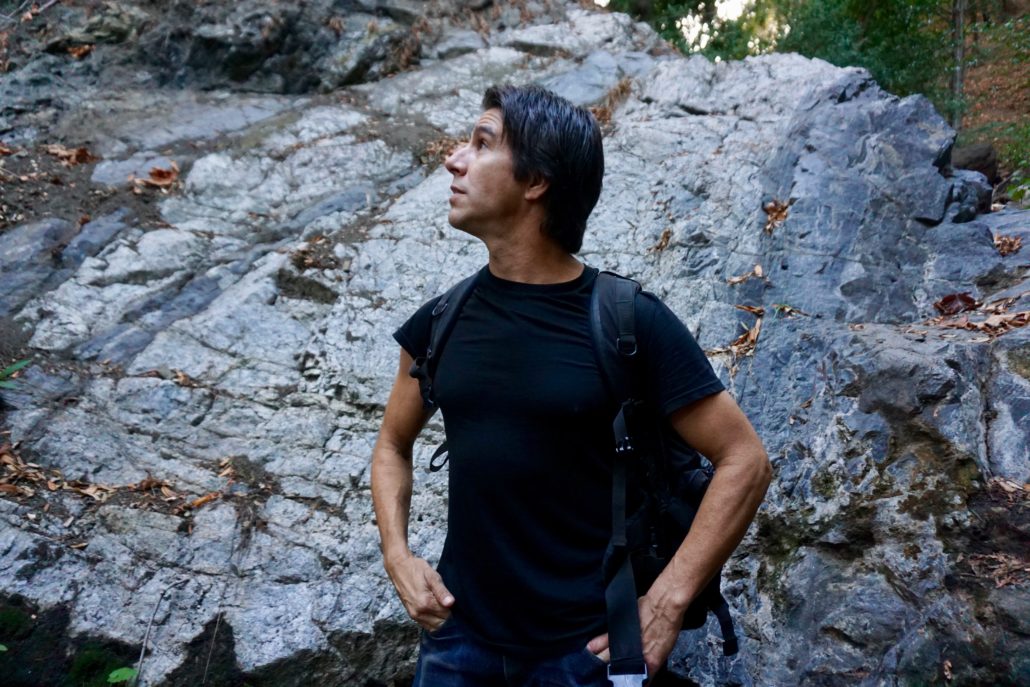 As I follow Robert Martinez up a narrow, rugged canyon sliced into the San Gabriel Mountains foothills, I experience the distinct feeling of being watched. It remains as we scamper up a short game trail to arrive at a tree-ringed clearing. Here, Martinez drops his pack, then sits down next to a small metal box, which contains an even smaller camera. As it turns out, there are eyes in these hills—and more than a few of them belong to Martinez.

The amateur wildlife photographer pulls a banged-up laptop from his pack and fires it up to see what the camera might have captured over the past week. Deer, bobcats, grey foxes, mountain lions, and bears frequent this exact spot, one of many layovers along the vast web of natural superhighways that exists in the San Gabriels, barely removed from the relatively unnatural sprawl located just below. They saunter past with their kin, they lounge under shady oaks, they caterwaul in search of mates—animals being animals, without the interference of humans. At least, none that they’re aware of.

I wait patiently as Martinez loads the videos. The camera is sensitive to motion, so more often than not, it’s triggered by wind or small mice scurrying past. But there are comical moments, too—curious squirrels walking nearly straight into the lens until their tiny nostrils fill the screen; blue jays suddenly popping up from below, as if playing a game of peek-a-boo.

It’s all enjoyable to watch, but let’s be real—what we’re really hoping to see is a mountain lion. 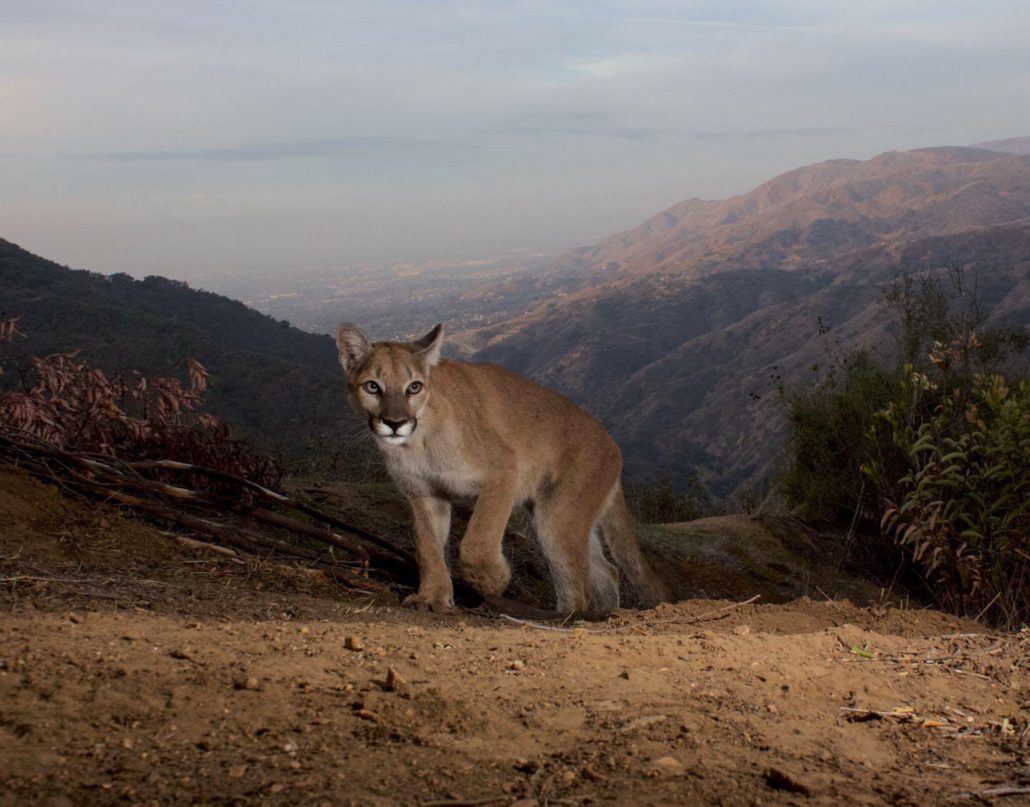 Martinez grew up near this canyon, aware from a young age of the “ghost cats” that lived in the hills above his home. “We never get to see them, but they see us,” he says. “That’s always been intriguing to me.” While visiting his mother in Colorado seven years ago, he remembers wondering if there were lions in those mountains, too. Back home, his curiosity piqued, Martinez began scrolling through YouTube, drawn to the amateur trail camera videos that served as a window into the cats’ everyday behavior. Then, he went for a walk.

Alone on a fire road, far from well-traveled hiking routes, Martinez saw tracks. “I couldn’t stop thinking how cool it was that the lion was walking right where I was walking,” he says. He set up his first trail cam in March 2012. “It was embarrassing telling people, ‘You know, I’m going to get a mountain lion on camera!’ It’s like, yeah, right—you’re going to get squirrels and nothing else.” He placed the camera near where he saw the tracks several months earlier. Six weeks later, Martinez caught his first mountain lion on film. “I couldn’t stop watching it,” he says. “After that, I got so obsessed. I’m like, I’ve got to see more.” 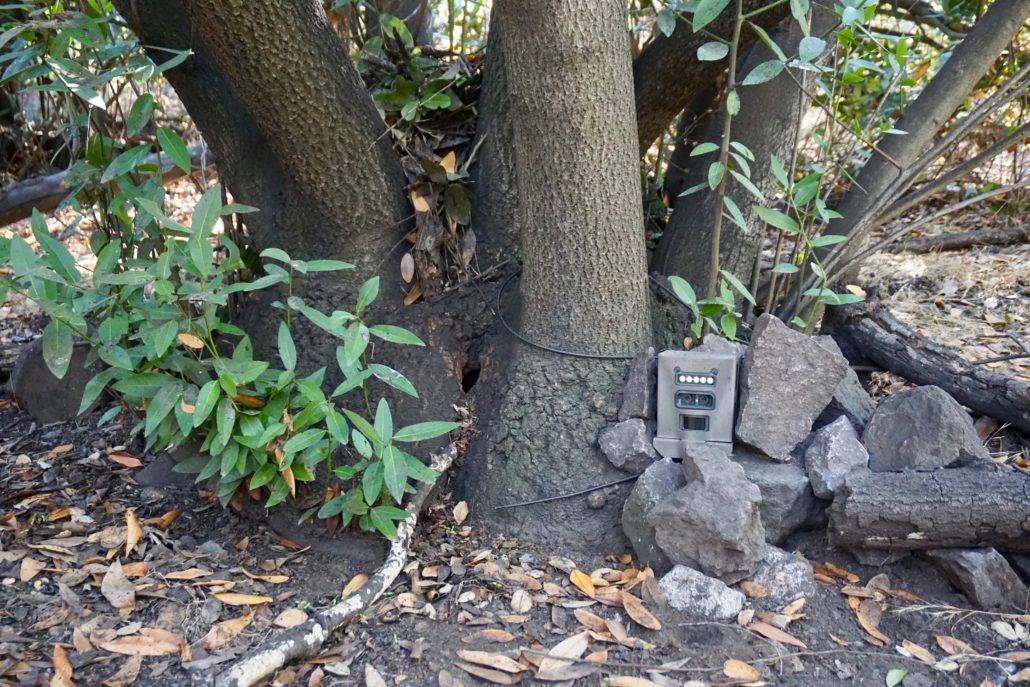 One of Martinez’s cameras, ready for action

Martinez now owns over a dozen different cameras, mostly video and a few still. He has no specific training in photography or wildlife biology—he works in the grocery industry—so this new hobby came along with a steep learning curve, albeit one he was eager to attain. He used to position cameras in easy-to-reach spots, which left them susceptible to theft. Now, Martinez chooses remote locations, searching for existing game trails and studying the area for signs of wildlife.

As we navigate around freshly downed trees and clamber over algae-slicked boulders, Martinez points out these signs—piles of scat; small, urine-soaked depressions left by lions to mark their territory; claw marks left by a bear. He also tells me stories of what he’s seen in this area, namely the remnants of mountain lion kills, some of them shockingly fresh. And of course, he’s also seen real, actual lions; only two so far, although he hopes to experience the thrill again. “It’s like peeking backstage at a show or something.” 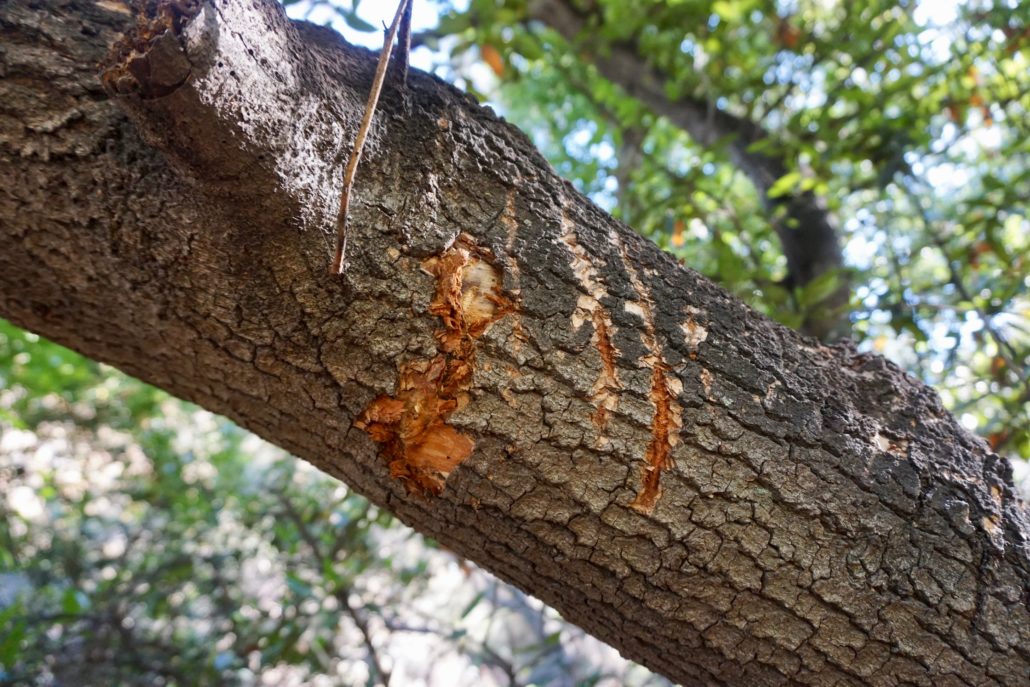 Signs of wildlife are everywhere, if you just know where to look.

Spoiler alert: we don’t see a lion that day on film or in person. Neither of us is particularly bothered, though. The thrill lives on for Martinez as he continues to explore the mysterious lives of mountain lions. He would love to someday see a den, and hopes to photograph lions in the snow. “I need to have cameras everywhere,” he laughs. “It’s like, what do they do all day? It’s fun trying to piece together the story.”

And as for me, I know I’ll be able to see his future captures on Instagram and YouTube, the main venues for Martinez’s work. In fact, shortly after our hike, I notice that he uploaded a photo of lions drinking at what he calls the “community pool,” a water hole hidden from sight for most forest visitors, but still visible to all thanks to his dedication and diligence in providing a window into the lives of these elusive creatures. 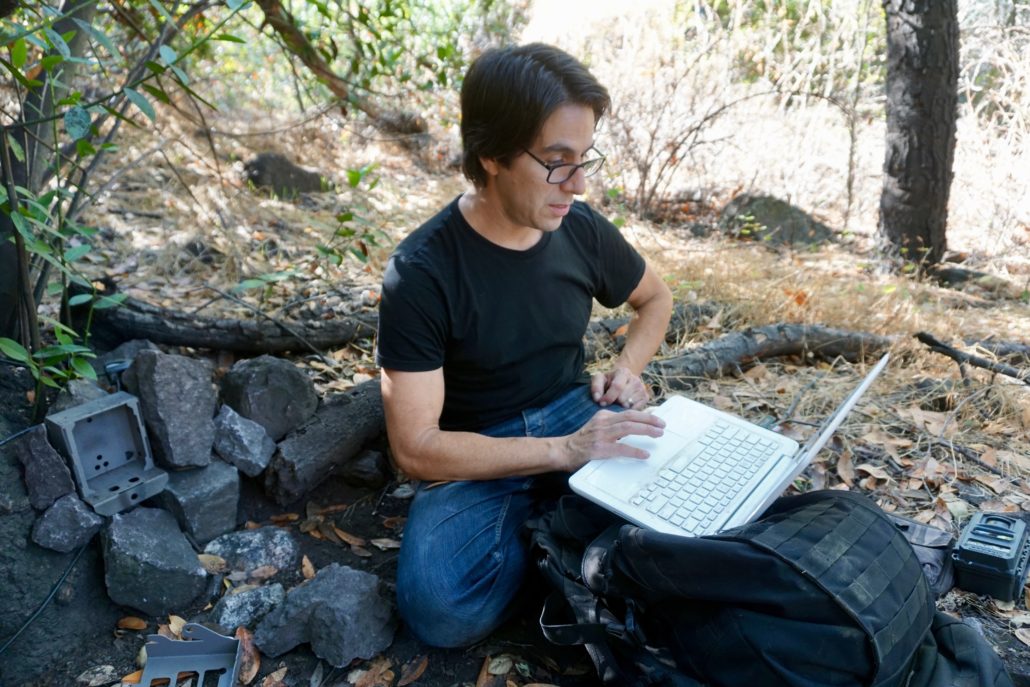 Martinez reviews video footage from one of his cameras

Martinez sells prints and licenses videos from time to time, and while he admires National Geographic photographers like Steve Winter, who have made a career in this field, he’s most grateful for the opportunity to simply view cats and other wildlife in their natural routines, and to share the experience with others. He also hopes to inspire people to view mountain lions in a different light.

“I get asked on a weekly basis, ‘Are you afraid? Aren’t you afraid of getting attacked? Are you going to be next?’ No, I’m not going to be next. They’re not looking for humans to eat. They’ve got plenty of deer,” he says. “They don’t wait in the bushes for humans.” 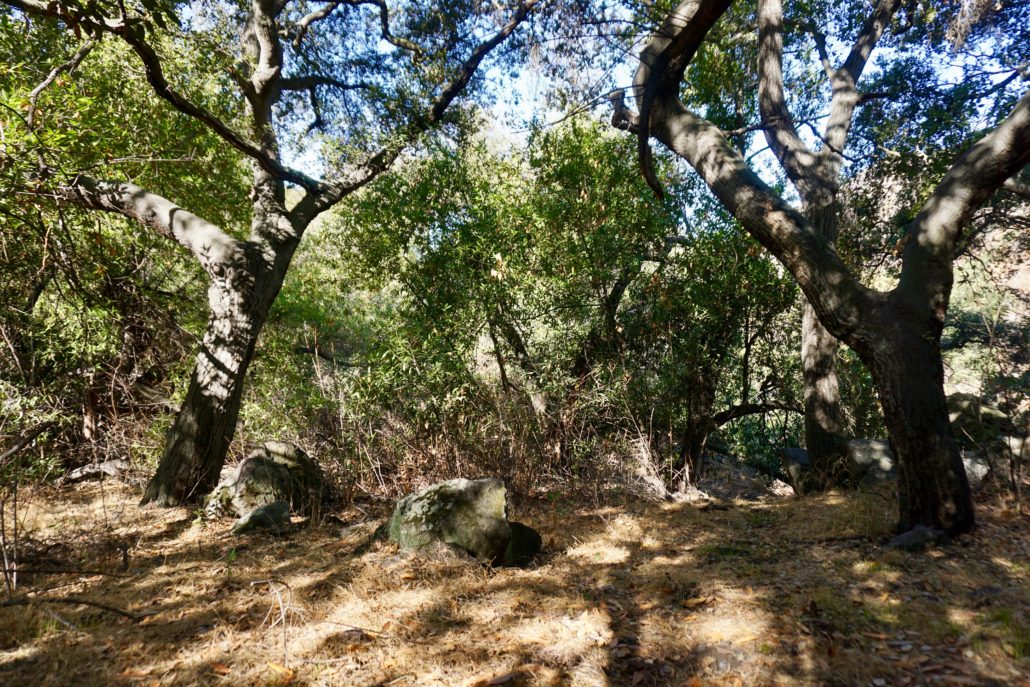 This clearing serves as a lounge, crossroads, and mating grounds for bears, mountain lions, and other animals.

Instead, Martinez wants people to lay their fears aside and realize that humans and cats can (and do) peacefully coexist, and that we can actually take an active role in ensuring their survival. He suggests that people consider donating or volunteering with organizations like the Mountain Lion Foundation and support the current efforts to fund a wildlife crossing at Liberty Canyon, especially important now that the Woolsey Fire has affected over 80% of Santa Monica Mountains parklands, crucial habitat for mountain lions.

“I want people to feel protective and not take them for granted, and realize how important they are to the ecosystem,” says Martinez. “To see the beauty in the mountain lions, to feel the passion that I feel.”

Mountain lion photo by Robert Martinez; all other photos by Shawnté Salabert