You’ve no doubt heard or seen a lot about #vanlife online over the past few years. Especially in the outdoor community, it’s become a fun way for people with flexible schedules to get to spend even more time in the outdoors and on the road, bouncing around from one gorgeous, scenic locale to the next.

I’ve known a few people who have built out their own vans, and while the experience across the board does seem to be immensely fun and rewarding, it can also be a huge sink of time and resources. Plus, if you live in a city, it’s not always feasible to park a huge honkin’ van on the street, you know?

Enter Roadsurfer, a German company that’s been renting out vans and mini-RVs to Europeans since 2016. Within six years of getting started, they expanded operations into 12 different European countries, opened 50 rental stations, and grew their fleet to 5,000 vehicles. They just opened up their first U.S. outpost near the LAX Airport, and they were kind enough to hook me and my husband up with a van to tour around the deserts of Southern California over Thanksgiving week. 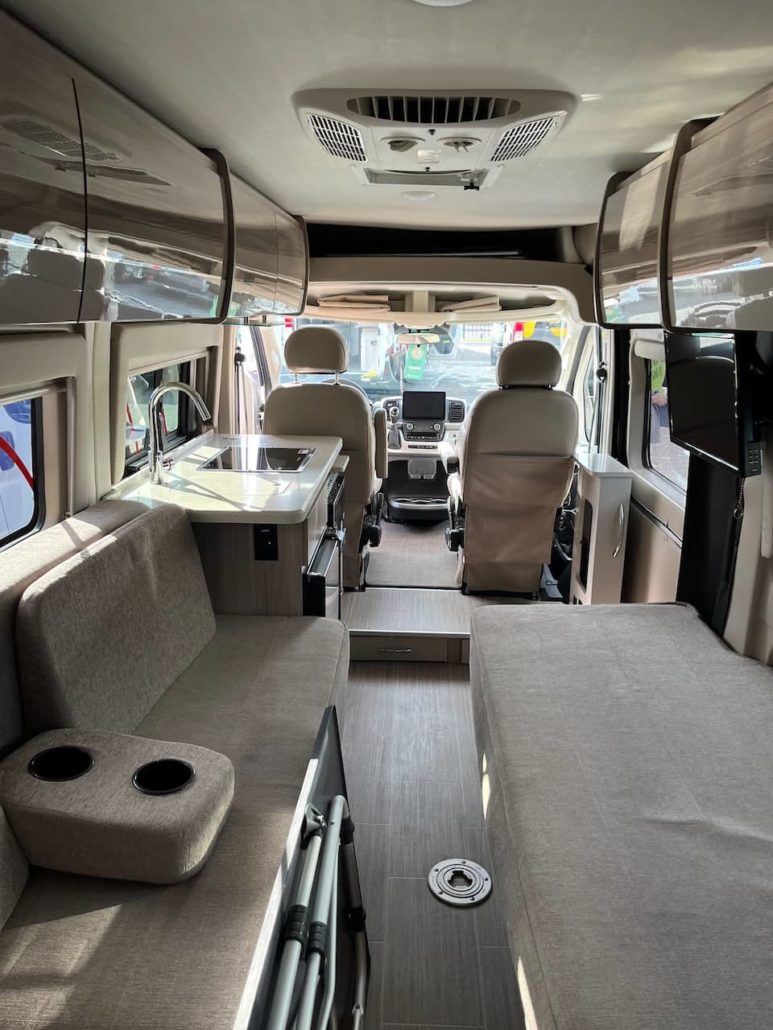 From this view, you’re seeing about 2/3rds of the interior

I arrived and was given a quick tour of all the bells and whistles by the helpful Roadsurfer staff. Whatever you’re thinking when you think of a van, bump it up a little bit and you’ll get their two-person ‘Couple Condo‘ model. It’s definitely more of a small RV than it is a van (technically it’s a Class B RV). It’s decked out with a mini-fridge and freezer, gas range, sink, microwave, and flat screen TV. The two seating areas in the back function as small couches, and they fold out into a comfortable flat bed and you can swivel in a small countertop that acts as a dining room table, too. There’s an air conditioner to keep cool and gas heat to keep warm.

They’re also surprisingly roomy — my husband is 6’2″ and he could stand up comfortably in the common area. 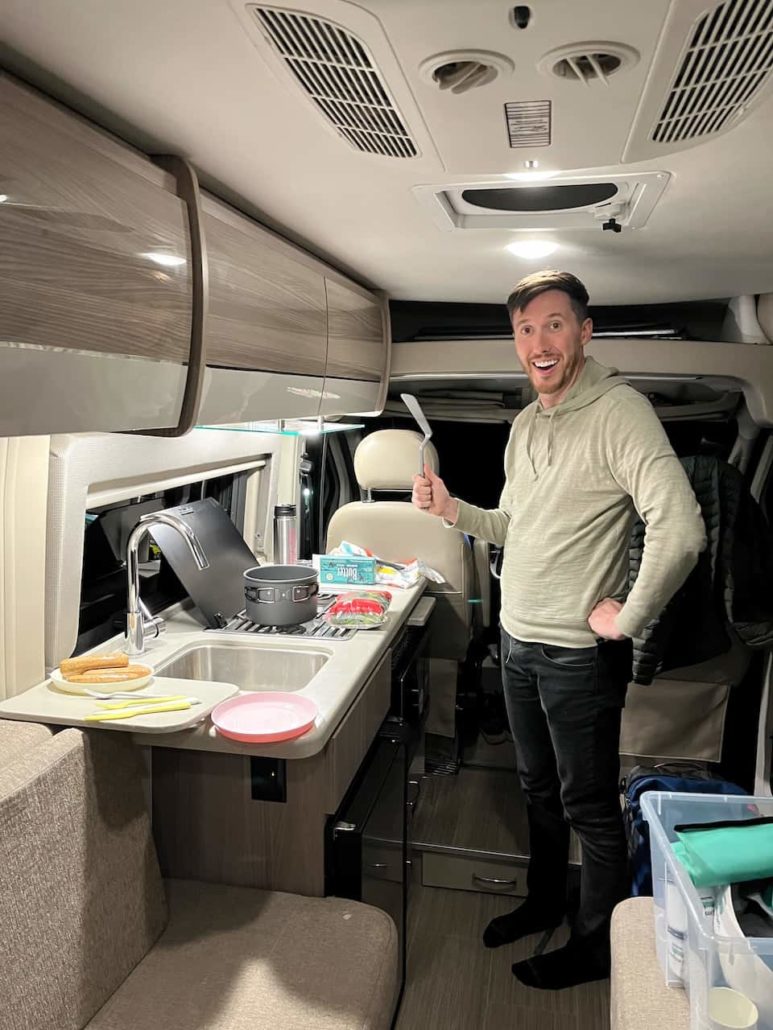 Tall people can enjoy these things, too

Oh, and yes, there is a toilet in the back of the van, which turns into a shower with gas-heated water. Very Euro-efficient.

Roadsurfer says they update the fleet regularly, and in 2023 most of the available vehicles will have been built in that calendar year. Talk about hot off the press!

We hit the road, stocked up at Trader Joe’s, and headed toward the Ricardo Campground in Red Rock Canyon State Park, which made for some pretty spectacular backdrops once the run rose. 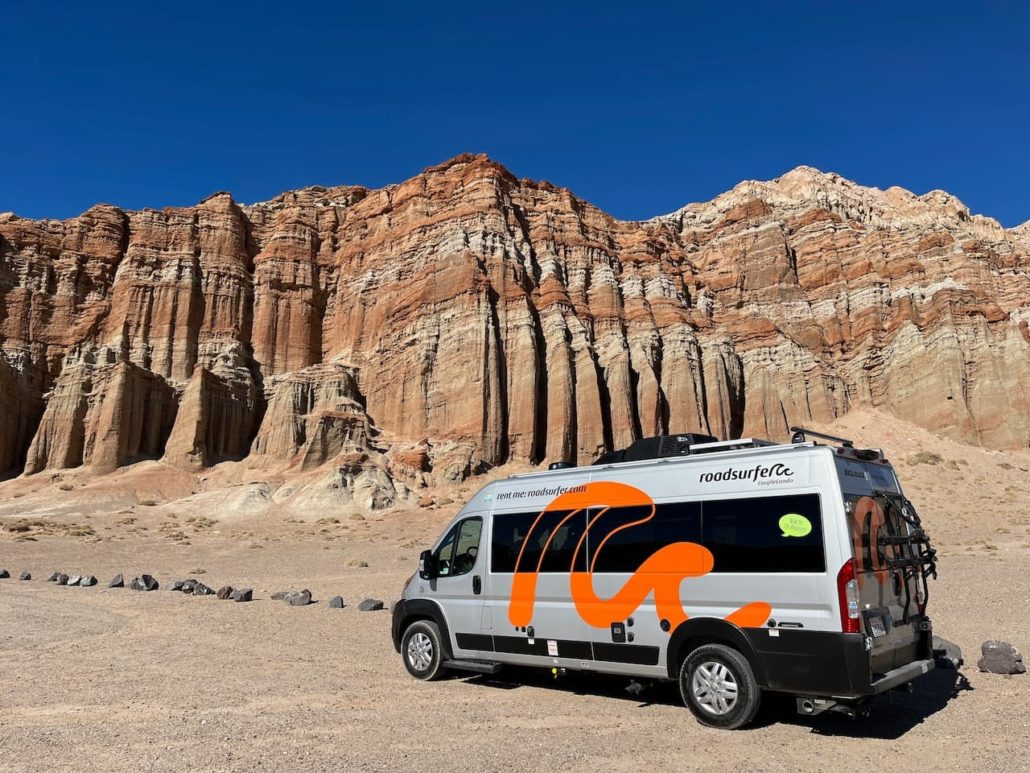 After a good breakfast and a few short hikes, we headed north toward the Southern Sierra, heading through the spectacular landscape at Walker Pass and into the Sierra Nevada with a lunch and nap stop at Chimney Creek.

Although it was definitely a few steps up in size from my old Civic or my current Crosstrek, the van was easy and comfortable to drive and handled the steep dirt roads really well. And I will say being able to cook lunch in a (small) kitchen vastly improved our usual mid-day camp and road-trip meals, too.

We considered hanging out for an evening up in the Sierra — we didn’t see a single other person on this road — but instead trekked back down through Owens Valley into Death Valley National Park for a convenient and cheap (if somewhat less picturesque) night at Panamint Springs. Still, we were able to soak in the breathtaking night skies and saw some nocturnal wildlife, and it was a convenient location to top off our water tank and flush out the RV’s black and gray water systems — one of the things you’ll have to keep an eye on if you’re spending more than a few days in one of these things. 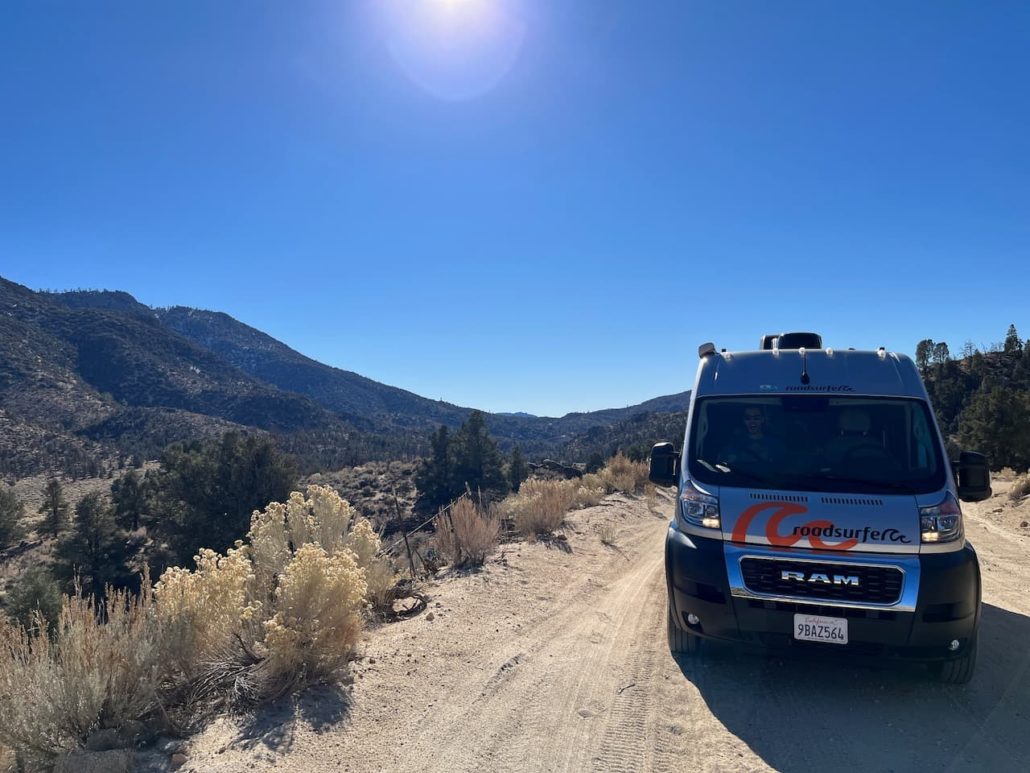 Climbing into the Sierra Nevada

That also meant that we had a great early start to enjoy one of my all-time favorite trails in Death Valley, the Gower Gulch and Golden Canyon loop. Death Valley during the cooler months can get a little packed, especially around the paved roads. And since when we were visiting was right before the holiday and a series of storms in August of 2022 still meant a lot of roads and trails were washed out. But we got into the canyon nice and early and had a terrific hike in bluebird skies.

Roadsurfer prohibits taking their vans into Death Valley during the summer months (and why would you even want to do that?) but during winter it’s fine.

In all of the many times I’ve been to Death Valley, I’ve actually never traveled east on CA-190 past the Funeral Mountains, so we wanted to check that off the list on this adventure. I also wanted to hit up a teeeeeeeny tiny little sliver of Death Valley National Park just across the border of Nevada — the home of the famed Devil’s Hole Pupfish!

You may not be surprised to learn that the short hike to the home of the Devil’s Hole Pupfish was supremely exciting for me, even though you really can’t see much and the whole thing has a weird military base vibe (remember those drunk jerks who drove up here and defiled the sensitive site in the middle of the night a few years back?). Still, I am a sucker for resilient desert life, and learning about the true strangeness of the Amargosa River inspired some musings in an LA Times WILD newsletter, too.

We finished exploring the Amargosa River area and stopped at the world-famous (at least among people into artsy desert weirdos) Amargosa Hotel to learn about Marta Beckett‘s passion project, chat with some hotel guests, and take a guided tour into the renovated opera house that Marta painted by hand over many years.

Marta was an experienced dancer who moved here from New York City in 1967 after getting a flat tire nearby. She decided to stay and performed regularly here in Death Valley Junction — which, I can attest, is truly in the middle of nowhere. She performed even if there was nobody else there, and according to legend she took on the project of painting the entire interior so she’d always have an audience. 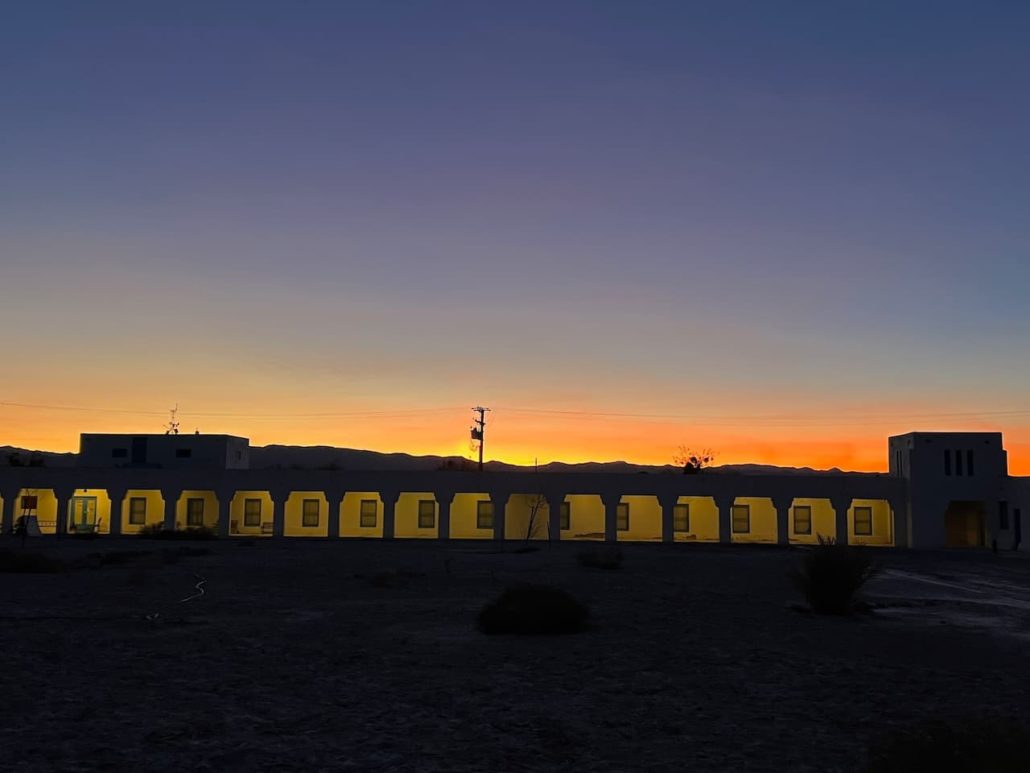 The Amargosa Hotel at sunset

The journey was unexpectedly moving and made even more lovely by the peaceful desert sunset. 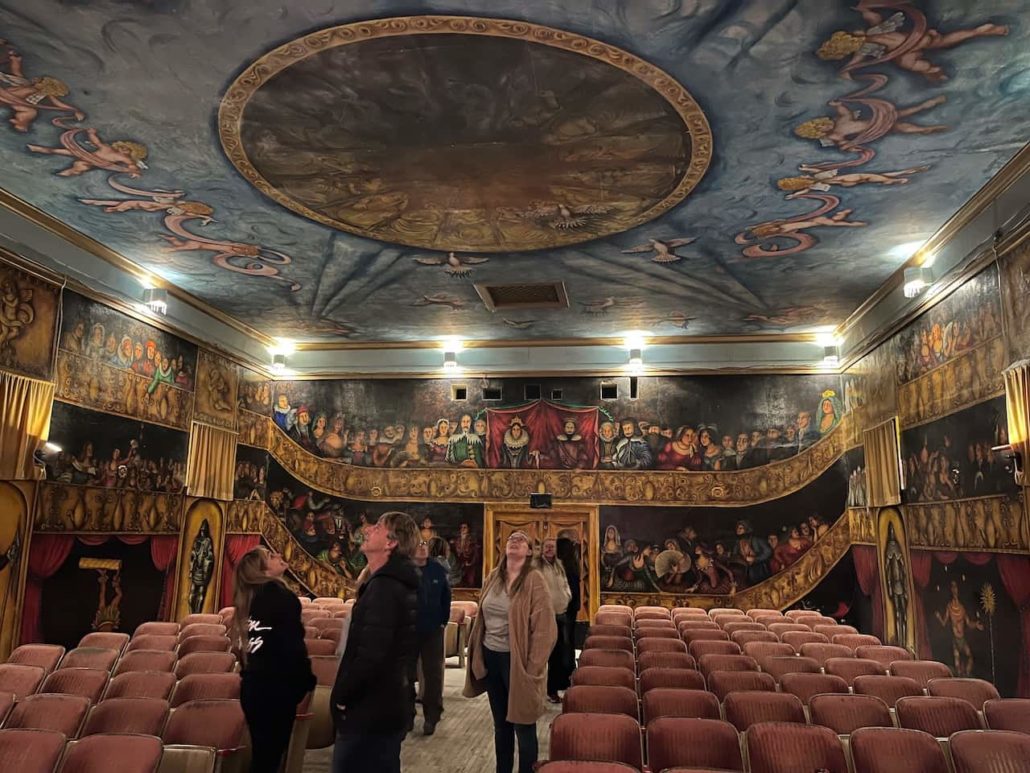 The hand-painted interior of the Amargosa Opera House

The next day we took the Roadsurfer van down a winding canyon road to the China Ranch Date Farm for more fascinating hiking in the Amargosa watershed (and date shakes, naturally) before trekking south into the Mojave to camp out in Afton Canyon.

It was chilly, but we still rolled out the sun shade and enjoyed watching the trains roll by and the stars come out before cooking up the remainder of our TJ’s food for what might be our least traditional yet one of our most memorable Thanksgiving dinners. 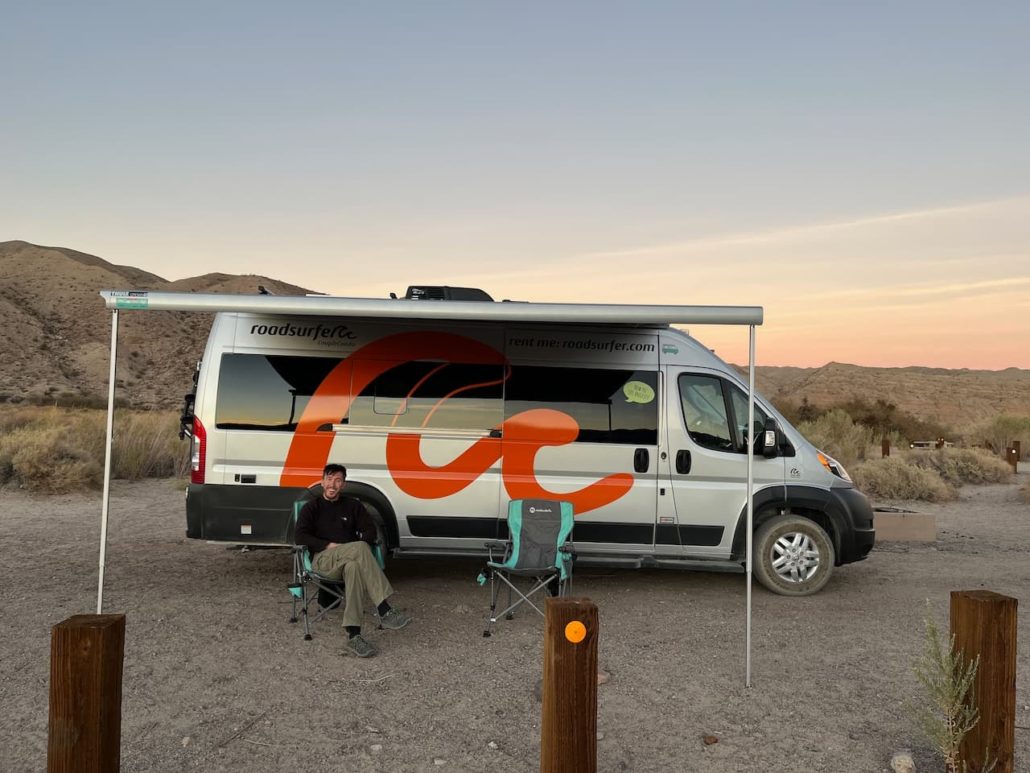 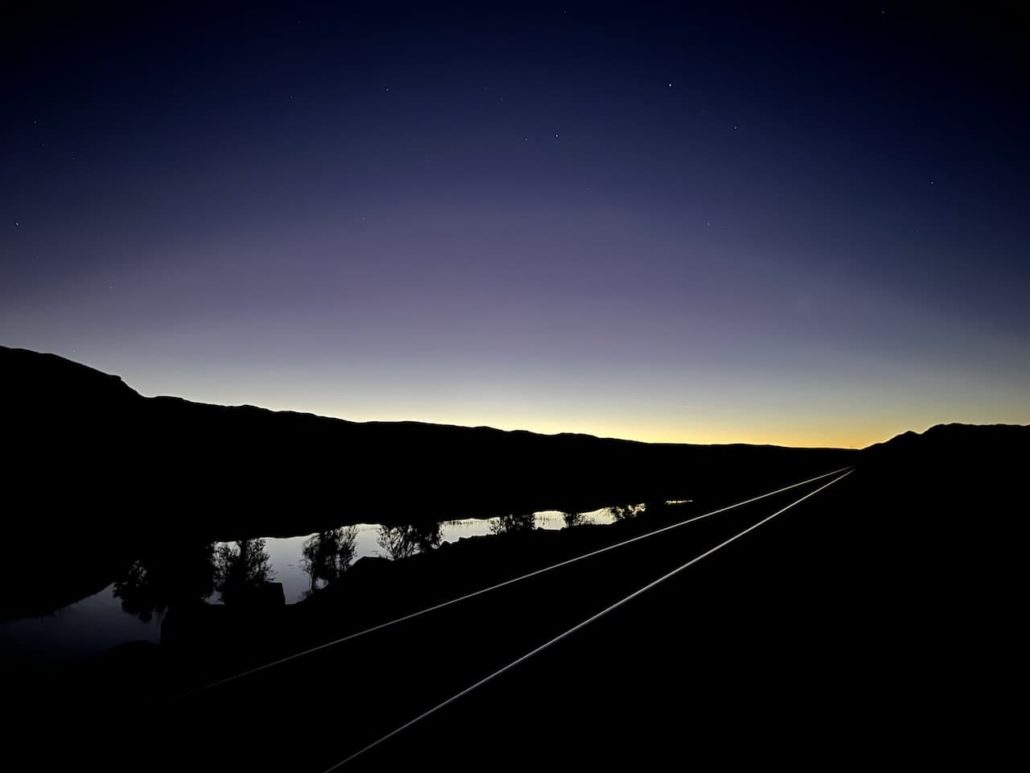 Was this the best Thanksgiving dinner backdrop ever? I think yes!

Overall, I can say I never had a huge desire to do the vanlife thing for an extended period of time — and camping in a van is obviously a different experience than camping in a tent. Although maybe I shouldn’t say “obviously” here because I absolutely packed clothes for winter desert overnights in a tent and completely forgot I would be in a cozy bed with gas heat! But I found myself really enjoying the unique aspects of van camping and honestly really enjoyed driving the van around, too.

Another great benefit of the van — especially for winter camping — is that you can still hang out comfortably after the sun goes down in the late afternoon. There have been many a winter desert camping trip where I find myself huddled in my sleeping bag for warmth well before a normal adult bedtime. The Roadsurfer van was a nice option for my husband and I to put on some tunes (without bothering our neighbors!) and play cards on the kitchen table with a nice bottle of wine. And I will say the ability to get moving quickly in the morning was a huge plus — no stuffing your sleeping bag into a compression sack or shaking sand off a tent before rolling it up.

I don’t know if I’d want to do van camping all the time, but this was a really fun and welcome change of pace from our usual camping trips and will really elevate your road trip experience to something special.

At the time of this writing, Los Angeles is the only city where you can rent a Roadsurfer, although they do allow one-way drop-offs in both San Francisco and Las Vegas. There are a number of potential add-ons you can choose, but all rentals have unlimited mileage. 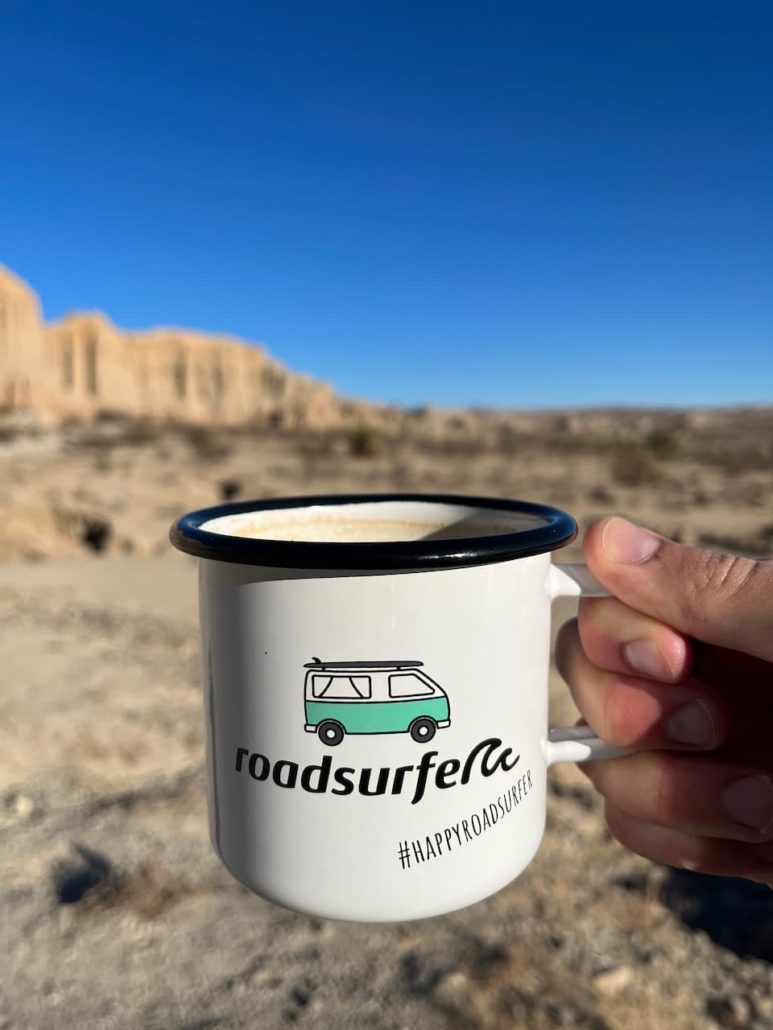 Modern Hiker received a complementary rental courtesy of Roadsurfer. Modern Hiker did not receive compensation for this post or any coverage, and the opinions are our own.