“Art” in the Parks

This morning, our friend Rebecca at Calipidder alerted us via a Facebook post to a woman named Casey Nocket who had traveled to the west coast from New York for a few weeks. Ms. Nocket had been enjoying her time in the outdoors so much that she decided to document her trip on Instagram. And apparently Nocket was so moved by all the natural beauty she saw that she just had to paint all over it. Modern Hiker brings you the story first. 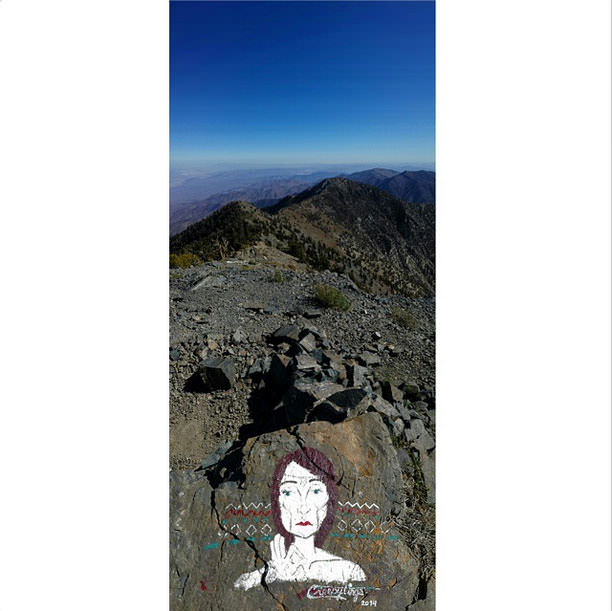 Sadly, this is not a one-time thing. Nocket’s “work” has also been spotted (and Instagrammed) in Yosemite National Park and Crater Lake National Park, as well. 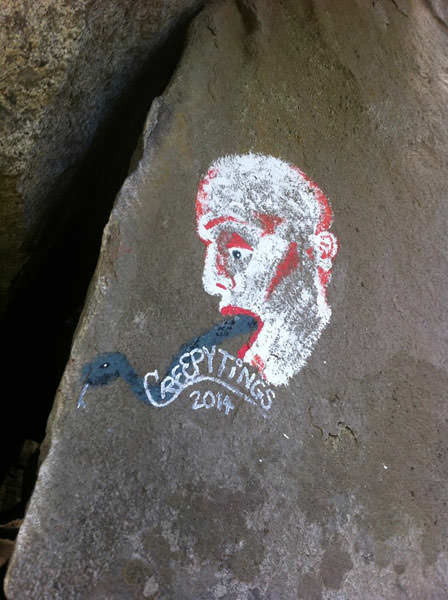 Near the Mist Trail in Yosemite National Park 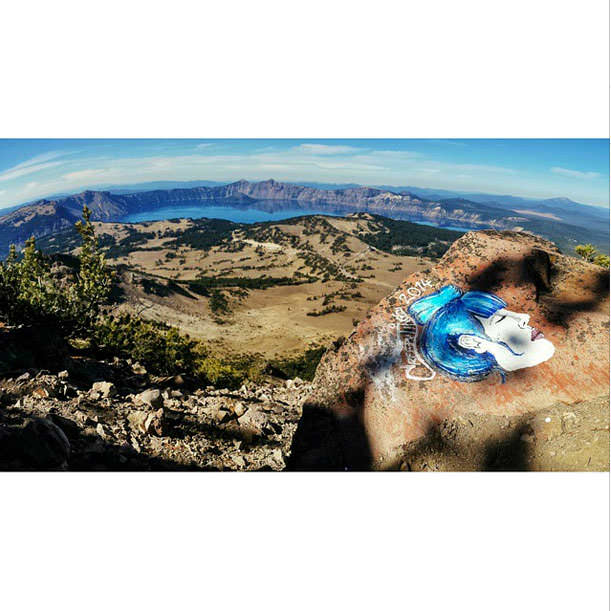 According to her Instagram feed, Nocket has been traveling quite extensively – she has photos tagged from all over the West, including stops in Carrizo Plain National Monument, Sequoia, Bryce, Zion, Grand Staircase-Escalante, Grand Canyon, Canyonlands, Rocky Mountain and Joshua Tree National Parks – where just today rangers posted this photo of Barker Dam, which has been closed since last February due to vandalism. There’s no telling how many of these paintings she left.

In case you were wondering, no – the images aren’t chalk – they’re acrylic paint. And yes, she knows she shouldn’t be using it. 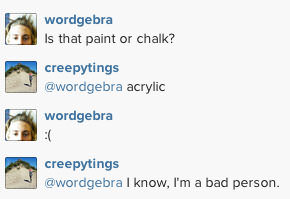 In either case, however, what Ms. Nocket is doing will not only get her some likes on Instagram, but will most likely result in a few felony vandalism charges once the Park Service catches up with her. And since, like most modern park vandals, she left a rich social media trail, it will likely only be a matter of time before that happens. Reddit already seems to be on the case. Update: Looks like Nocket’s Instagram account is now set to “Private.” All photos with paintings and Instagram conversations here were screen-grabbed from her account on the morning of October 21st. And yes, it also appears that she defaced Canyonlands and Zion on her trip. From her Tumblr blog: 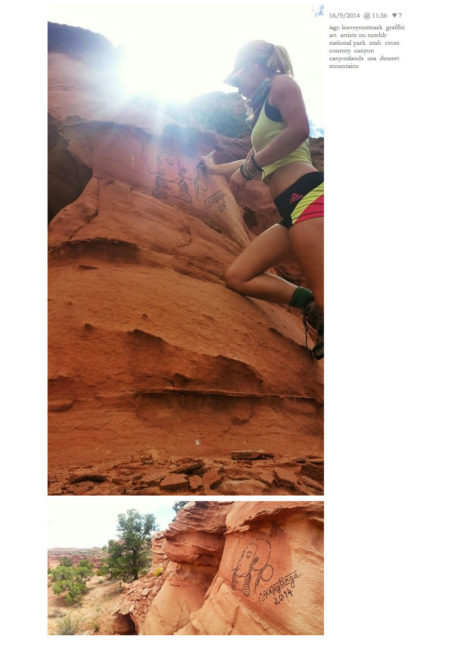 Second Update: A National Park Service Ranger is launching an investigation. Although she made her account private, I still had a window with it open and was able to get a few more images – including one defacement of The Ginn Mill in Denver, Colorado, another defacement somewhere tagged only as “the wilderness,” and a photo of her crawling over the existing, protected pictographs in Joshua Tree. All three are posted below. 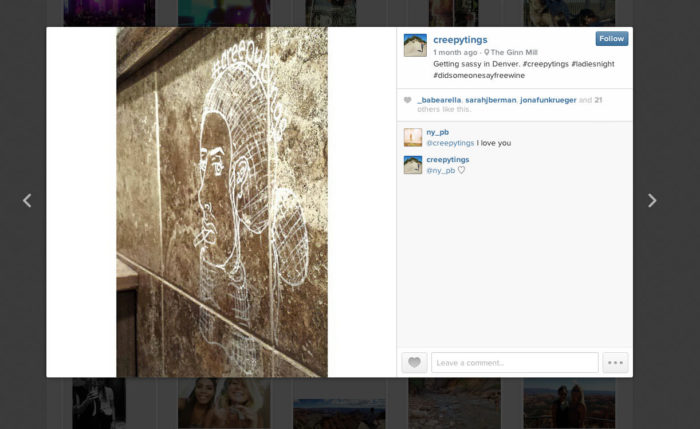 The Ginn Mill in Denver, CO 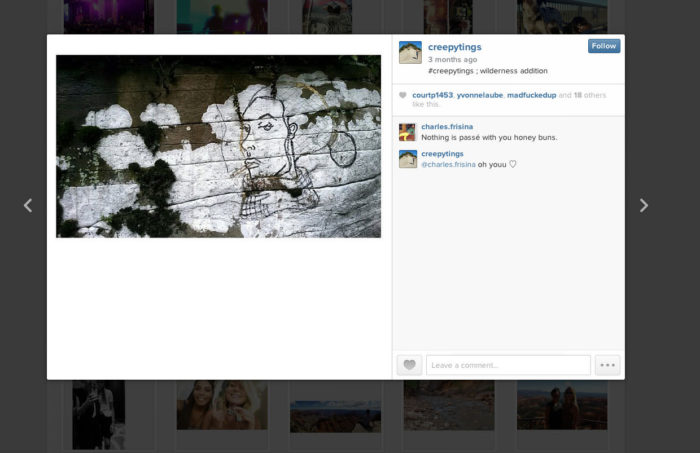 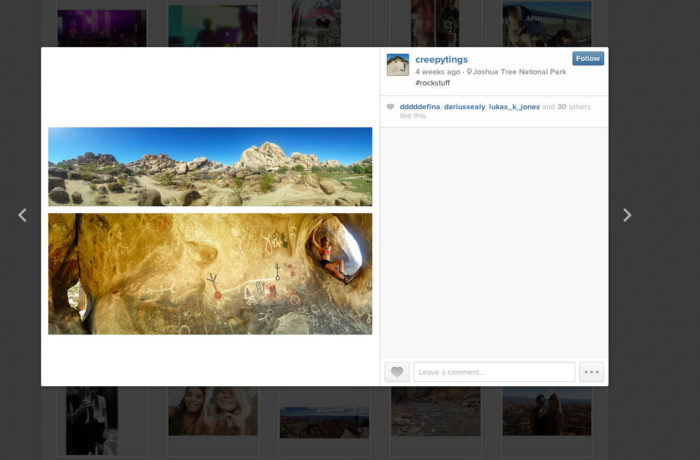 Climbing on the protected pictographs near Barker Dam

Third Update: Hi, Redditors! Thank you for helping us make this story the national news it should be! If you live or like to hike in the southwest, consider subscribing to our site via RSS or even just signing up for our weekly mailing list. We like to keep up on news like this but we also like to give people ideas for new trails to hike and parks to visit so we can get more people outside. If we have more people out there who can appreciate the beauty of our wilderness for what it is, there will be fewer who feel like they literally need to leave their mark on it.

Fourth Update: The story is definitely picking up steam, and some national outlets are reporting that Nocket has retaken to her formerly defunct Tumblr blog at creepytings.tumblr.com. On the site, which has undergone a complete graphical overhaul, the author now seems to be combative – comparing her work to that of noted street artist Banksy and defending herself as a feminist. The author now also says she plans to paint on gravestones because it will cause less controversy. Pulled screengrabs are below:

It is my opinion that this Tumblr account is NOT operated by Casey Nocket. The new Tumblr blog only goes back as far as when the original version was taken down, the visual and writing style are completely different, and the new content seems more interested in stirring up controversy via combative language and buzzwords like “mansplaining.” As it goes for all trolls, I would encourage everyone to ignore this new Tumblr blog – and hope that all of the new journalists who are coming to the story don’t associate this new content with Ms. Nocket.

Fifth Update: After spending a LOT of time thinking and writing about this issue, I’ve written a follow-up post answering some questions about why this is such a big deal and how we as the outdoor community can turn it into something positive.

Sixth Update: We already knew she was in Rocky Mountain National Park but we didn’t have evidence of her graffiti there. Sadly, now we do. 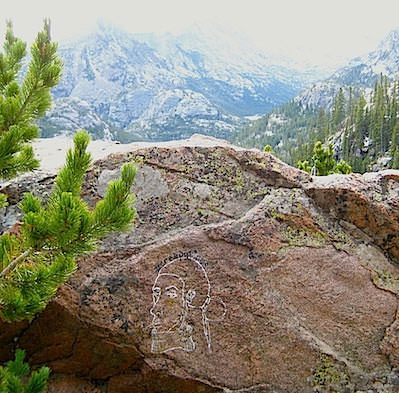 Seventh Update: In case you haven’t noticed, we’ve been having a few server burps lately. While we strongly encourage you to donate your money or time to the National Parks, we have also had to pay out-of-pocket overage fees to make sure the site remains up and running for everyone who wants to stay up to date on this scandal. If you’ve appreciated our reporting and have the resources, please consider helping us out by purchasing a Modern Hiker shirt, hoodie, or sticker from our store or by making a donation directly to Modern Hiker via PayPal. All donations we receive in excess of our costs for running this story will be donated to the affected National Parks. Thank you.

Eighth Update: Another outdoor web site called TrailMob has reported that they were able to contact a relative of Ms. Nocket, who said she was remorseful and cooperating with authorities. While I hope that is true, the person only spoke anonymously and the site did not publish any quotes. While the story may be true, until someone comes out on record we should treat this ONLY as a rumor. I have seen too many stories get completely mis-reported based on rumors and conjecture and I would hate to see it happen to this one. In the mean time, if you would like to enjoy the great outdoors in a way that DOESN’T damage it, we suggest you read our new post on the 7 Principles of Leave No Trace and why they’re important to the outdoor community.

Ninth Update: While there is yet to be any confirmation or on-record quotes, rumor is that Ms. Nocket has been contacted by NPS Officials and is supposedly cooperating. As of 10/28 at 10AM Pacific, no charges have been filed and Ms. Nocket has not been officially named a suspect in this case. I was on KPCC’s Take Two yesterday and got to go a little more in-depth on this issue live, on the air, and also did a live Skype audio interview with Nevada’s KNPR. We have also seen that one NPS Spokesperson has asked a site to blur images of the Creepytings graffiti. As one of the primary sources of the images in this story, we at Modern Hiker have not been contacted by Park Service officials with such a request and to be honest, we’re not convinced blurring the vandalism would have the desired effect. We will update you if we are contacted.

Tenth Update: As of October 29th, Casey Nocket has officially been  NAMED AS A SUSPECT of vandalism in 8 National Parks. From the press release the NPS put out, the graffiti in Rocky Mountain National Park was removed in late September, while an unknown person or persons removed the image in Yosemite National Park. The image in Crater Lake is currently covered in ice and snow and will most likely not be able to be removed until next year at the earliest. The NPS urges people to be patient as they build their case and to report any additional instances of graffiti to them. The NPS is urging people to NOT attempt to remove the graffiti on their own. Initially I had written that Ms. Nocket has been charged – that is incorrect. She has been named a suspect but not charged with anything. The NPS is consulting with the US Attorney’s Office at this time.

WASHINGTON – A 21-year-old New York State woman, Casey Nocket, has been identified as the primary suspect in recent vandalism cases that affect eight national parks in the western United States.

Investigators continue to collect evidence of the crimes, conduct interviews, and are consulting with the U.S. Attorney’s Office about potential charges. We ask the public to exercise patience and allow due process to take its course as the investigation moves forward.

The image in Rocky Mountain National Park was reported to the park and removed in late September before similar images were found in the other national parks.

Ice and snow now cover the image at Crater Lake National Park, and it may not be accessible for assessment and clean up until next summer.

An image in Yosemite National Park was removed by an unknown person or persons.

If people visiting these parks come upon these images, they should contact the nearest park ranger with information about the image location. Visitors should not attempt to remove the images.

The National Park Service was contacted on October 20 about this vandalism case. The investigation began immediately.

Eleventh Update: Wondering what it’s going to take to get some of this graffiti off the landscape at these National Parks? The Associated Press and Mashable looked into it for us – and as we feared, it’s not going to be easy.