How You Can Help Rebuild Paramount Ranch After the Woolsey Fire

Head to the bottom of this piece to see some links to organizations and groups that need your help in the areas affected by the Woolsey Fire.

The air at Paramount Ranch was warm, dry, and still. Although the skies were clear, the scent of smoke lingered in the same way you can still smell a good campfire on your clothes when you get home from a backpacking trip. But this was the smell of devastation.

The Woolsey Fire had burned over 80% of the parkland in the Santa Monica Mountains National Recreation Area and the Park Service had invited members of the media to survey the damage to Western Town in Paramount Ranch — the only unit of the National Park Service dedicated to telling the story of America’s film industry.

Paramount Ranch has been an active filming area since 1927, with more than 300 films, commercials, television shows, and web videos shot in the park. Even during shoots, the public was allowed to access the park and potentially get a chance to see Hollywood at work. 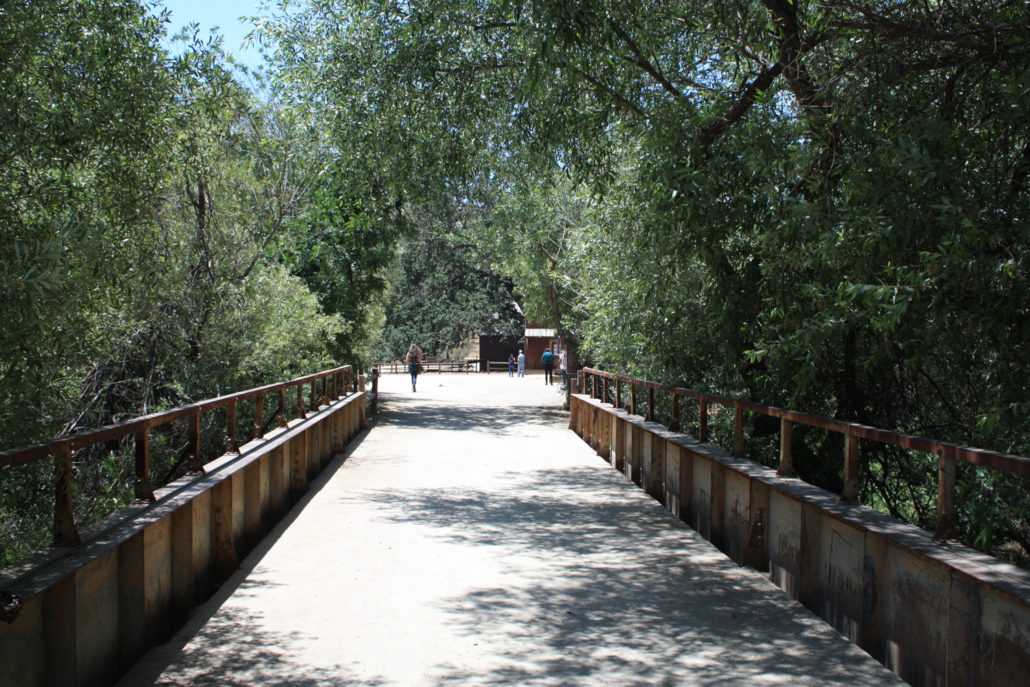 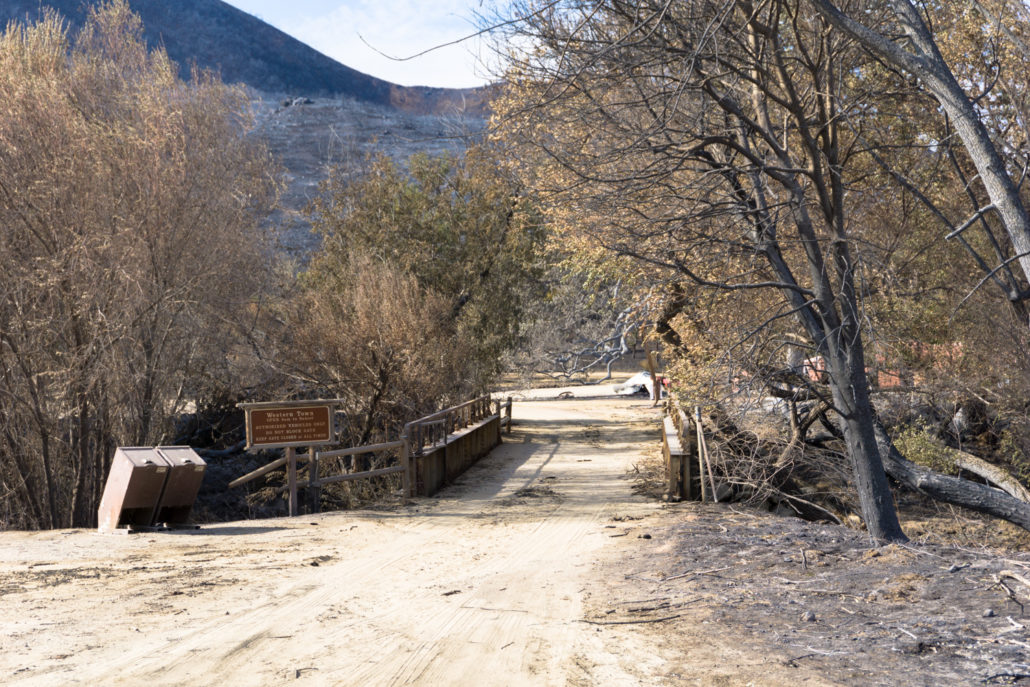 Bridge to Western Town after the Woolsey Fire, 2018

On this day, the cameras were there for a different reason — and although the scene was shocking in many ways, there is hope to be found amidst the destruction here.

The Damage to Western Town

Western Town is – for all intents and purposes – gone. The vast majority of the structures built as sets, including two from the original Paramount Ranch built in the 20s and a building used as a residence by an on-site ranger were burned to the ground. 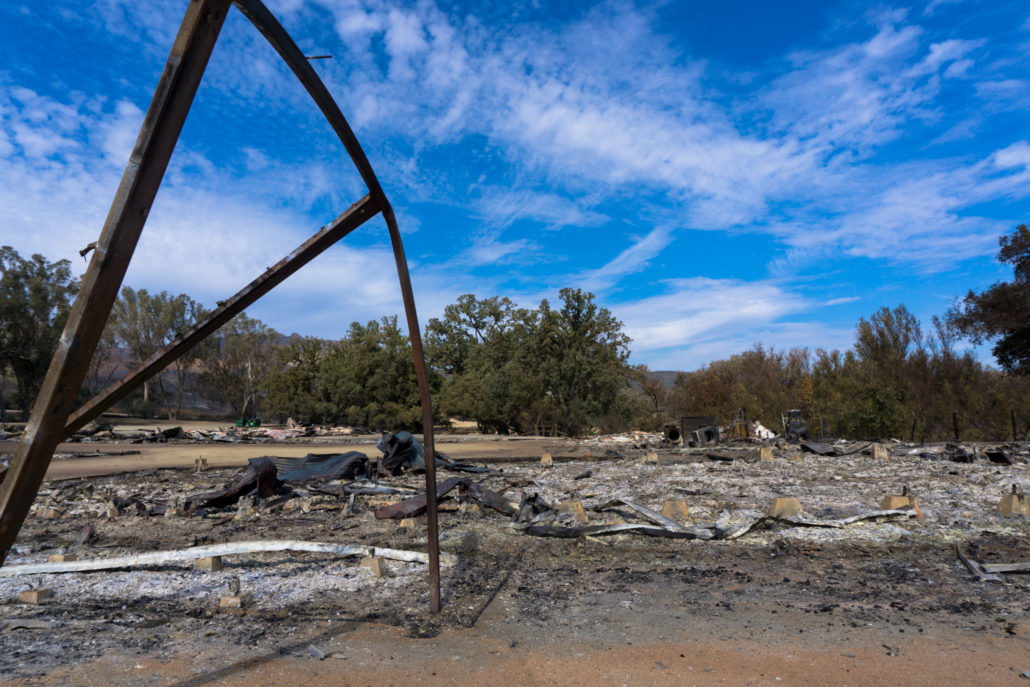 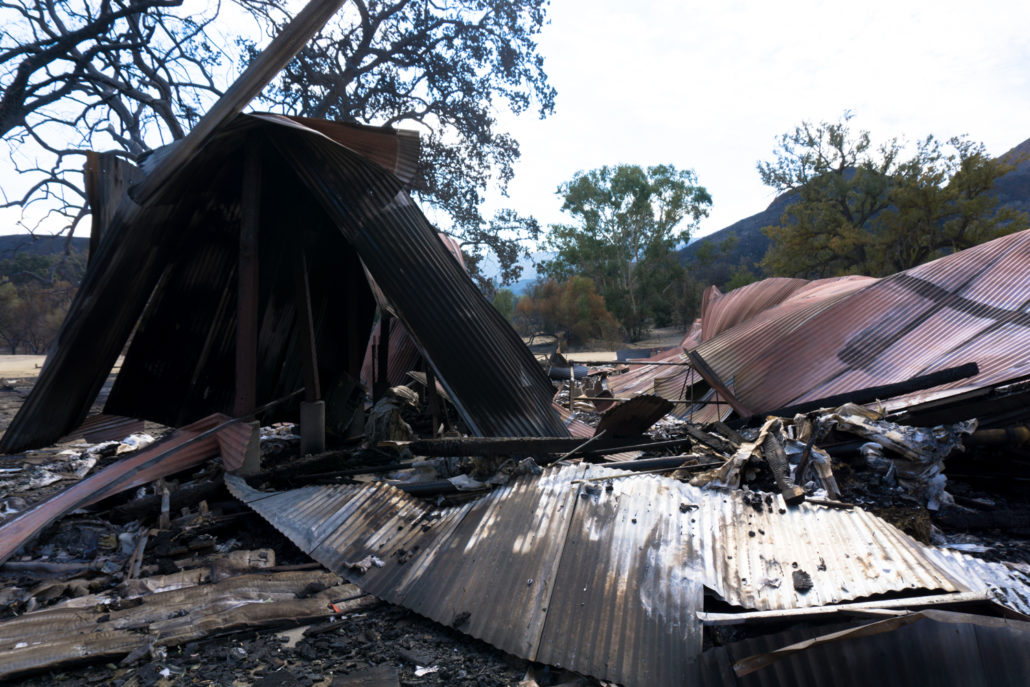 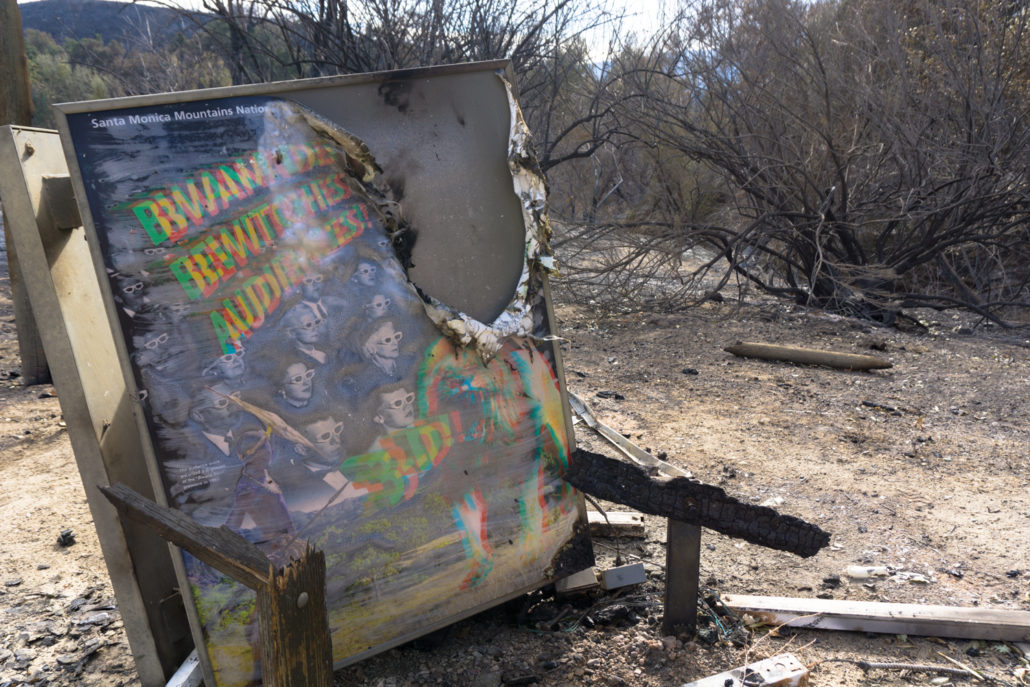 Two buildings that survived the fire were the train station built for “Dr. Quinn, Medicine Woman” and a church built for “Westworld.” There was an eerie sense of calm around these buildings, as if nothing has happened in the previous week. There were even a set of adirondack chairs and a hay bale still sitting on the train station, as if waiting for picnickers to return. 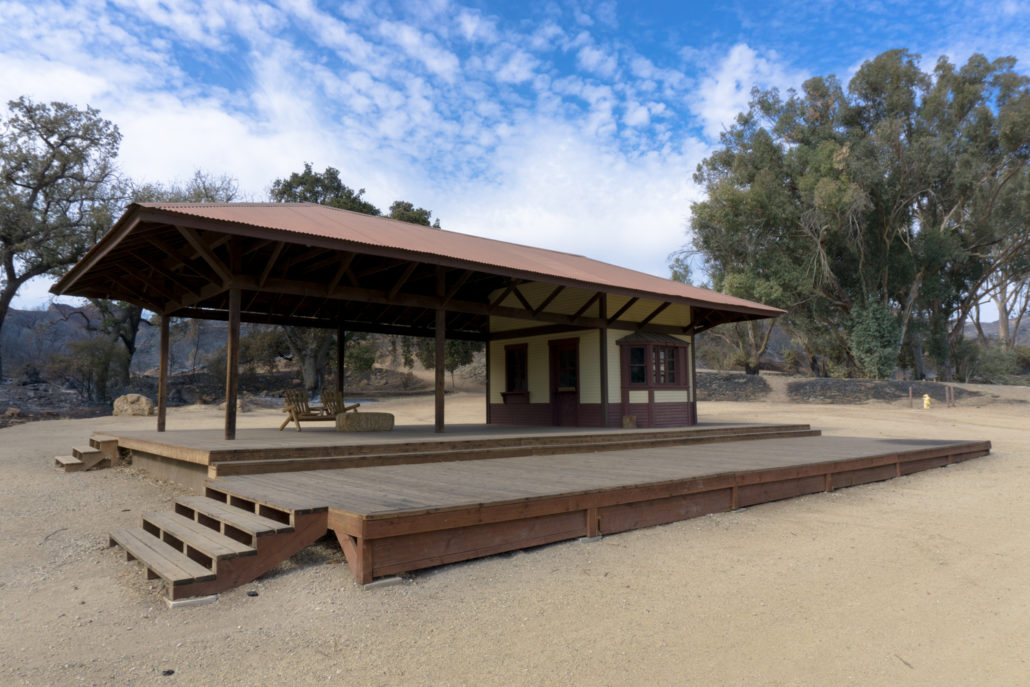 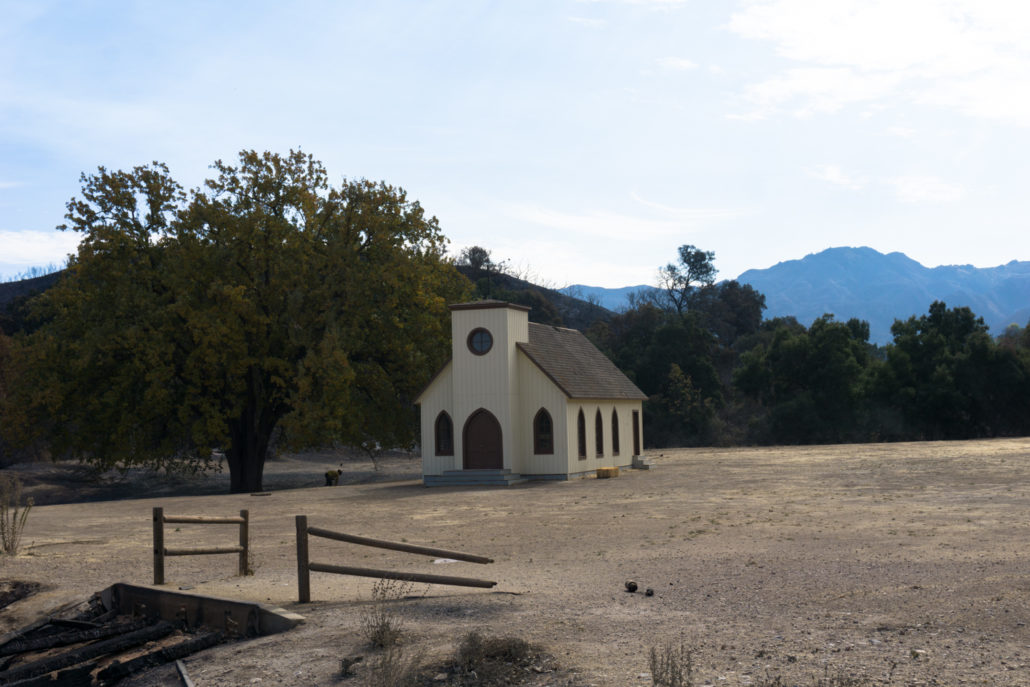 Some things to keep in mind about this damage — although there was no human life lost here and the damage pales in comparison to those who have lost their homes and even loved ones in other locations affected by the Woolsey Fire, there is still loss here. These were primarily sets — non-functional fronts for entertainment producers — but there were several historic buildings lost from Hollywood’s early movie-making days that can never be replaced. In addition, countless generations of visitors have enjoyed these grounds and created their own memories and sense of place attachment. Visitors could watch movies and TV shows being created. There were star parties and ghost stories at incredible ranger-led evening programs. The National Park Service screened classic movies here — including some made at the Ranch itself. A banjo and fiddle festival was held here — and before that, a much-beloved renaissance faire. There were weddings and engagements — not to mention all the hikes and horseback rides enjoyed.

Many representatives from park systems and local governments were on hand at the event, and the overwhelming sentiment was that Paramount Ranch is a place where stories are told. Western Town is part of that story. Now the Woolsey Fire is part of that story as well. But soon, the next chapter will be about rebuilding this landscape and welcoming visitors back into this special place. 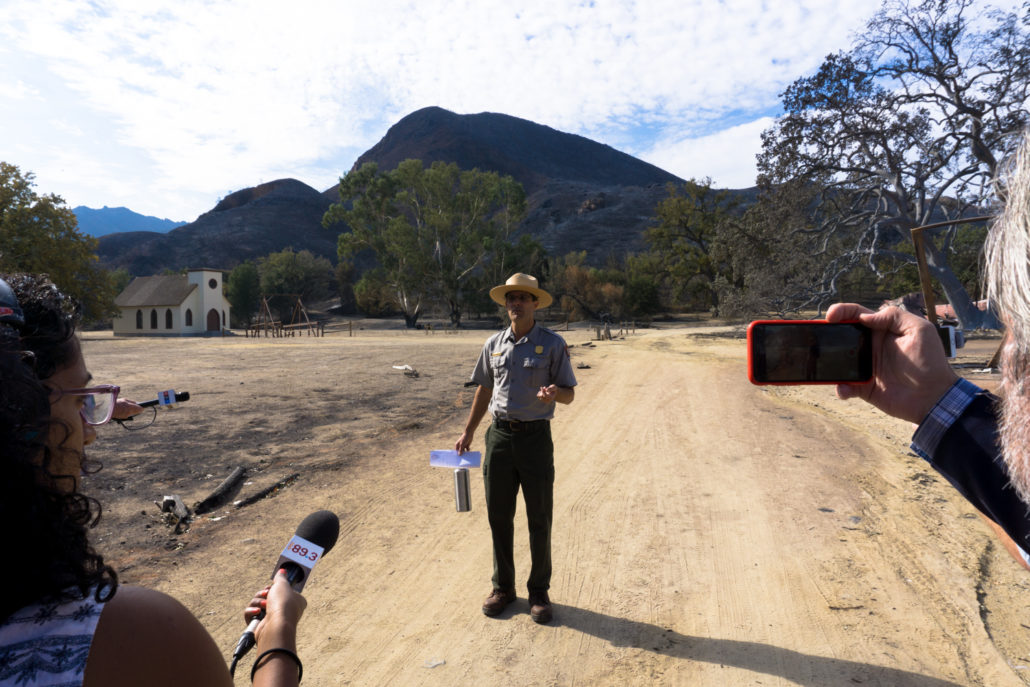 The plan is to reach out to the entertainment industry for financial and planning resources to quickly rebuild a temporary set on-site, with the ultimate goal to fully rebuild Western Town with more fire-resistant materials. Members of the entertainment industry have already been in contact with the National Park Service and the Santa Monica Mountains Fund, and the plan is to have the new Western Town operational within 24 months.

As of right now, there is no date set for when the public can access Paramount Ranch again. The structures will have to be cleaned and removed, debris cleared, and trails inspected for damage. In addition, archeologists will have to sift through the rubble and the burned landscape for salvageable artifacts.

Earlier, we had written about the resilience of the chaparral and coastal sage scrub landscape in Southern California … and I will say that for the most part, the land looked better than I was expecting it to. You can see in several of these photos that while the grasses and low shrubs are mostly gone, a good deal of the tree canopies of the oaks and sycamores are still green. 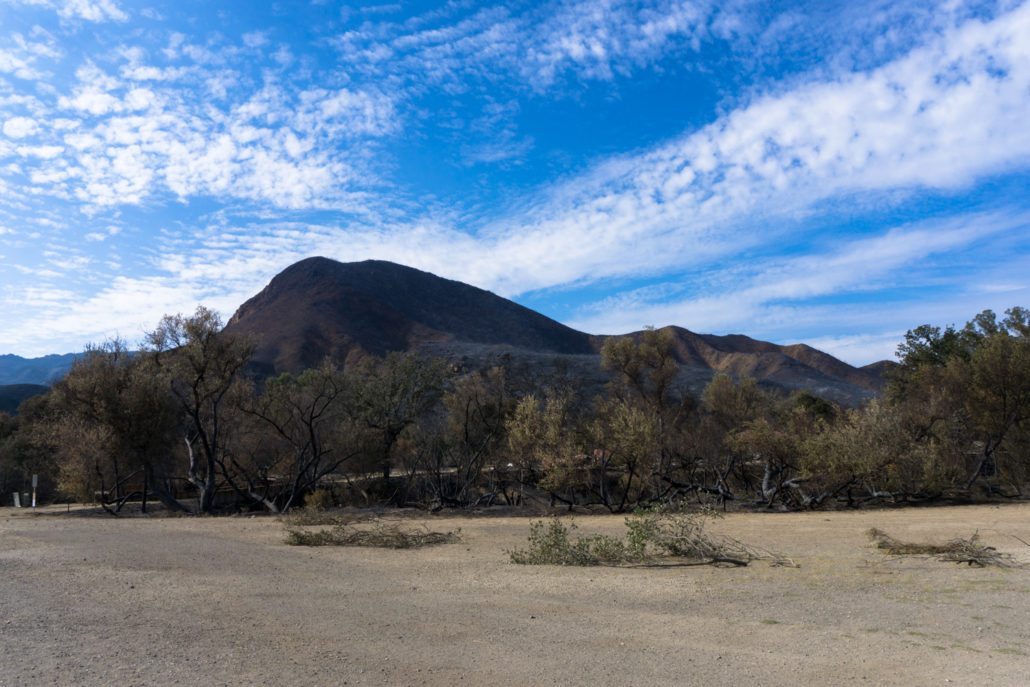 These trees have evolved to survive fires, and given the right conditions they are apt to recover. Many of the older trees have been through many, many fires before — so if we get a decent wet season (and that rain comes down gently instead of in downpours that can trigger landslides and mudflows), I wouldn’t be surprised if we see a pretty good restoration of this terrain within a few years.

One tree of note is the huge valley oak in the center of Western Town, seen here in a 2016 photo: 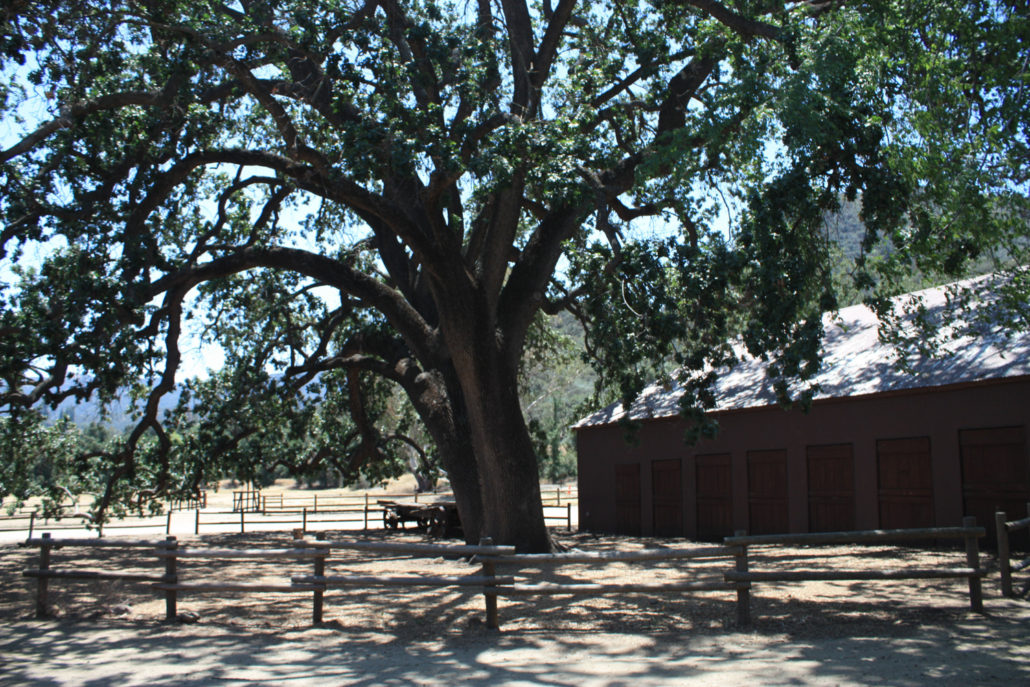 This stunning and iconic tree is estimated to be between 200 and 300 years old. It’s still standing after the Woolsey Fire, but it’s definitely looking a little worse for the wear: 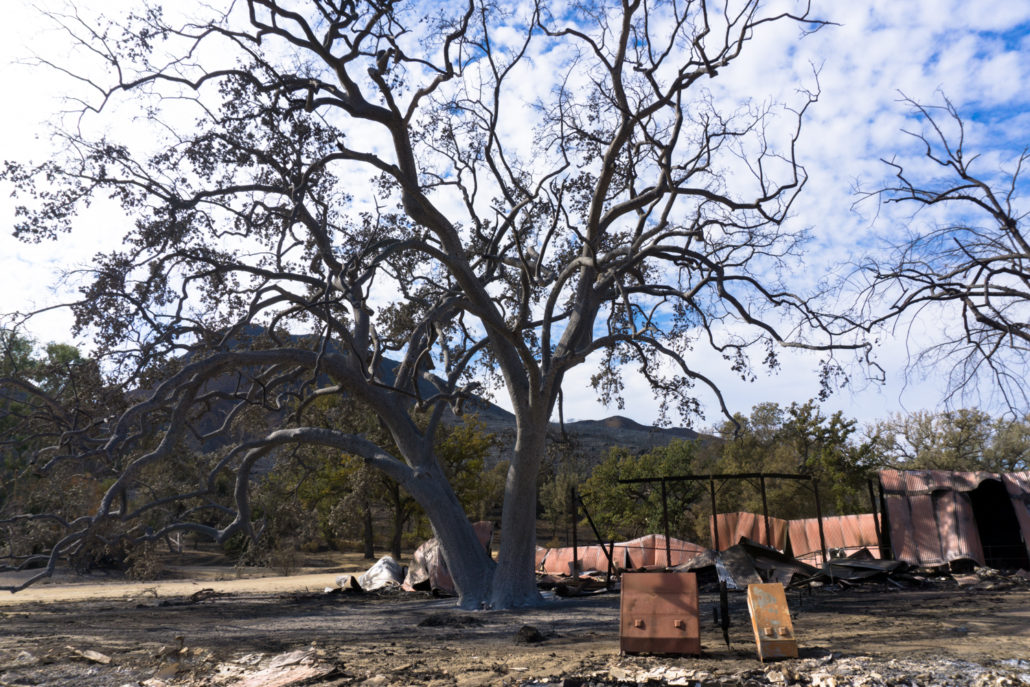 Similar-sized and aged oak trees that burned in the 2013 Springs Fire have had a good recovery rate since that fire, but this particular tree was close to structures that burned, which means it was likely exposed to higher temperatures for a longer amount of time than trees out in the open chaparral and oak savannah. Superintendent Szymanski said, “we’re crossing our fingers.”

During the event, I noticed that wildlife was already beginning to return to the area. Several rabbits ran past the ruins toward the hills. Squirrels and birds were exploring the burned and unburned trees. A red-tailed hawk soared in the air high overhead.

How You Can Help

Right now, land managers are waiting for the rainy season to settle down before hands-on trailwork begins. The best way to assist right now is through donations. Parks will be re-opened on a case by case basis and the best way to stay on top of that is to check the social media accounts for the following:

If you are interested in volunteering in any capacity in the Santa Monica Mountains once these agencies are ready for your help, please fill out this Jotform with your contact info and skill sets or services you’d like to offer. Once the region is safe for volunteers, they’ll get in touch with you. We’ll also do our best to keep you informed about volunteer opportunities as they arise, and we’ll see you out there to give our Santa Monica Mountains a little TLC as they heal. 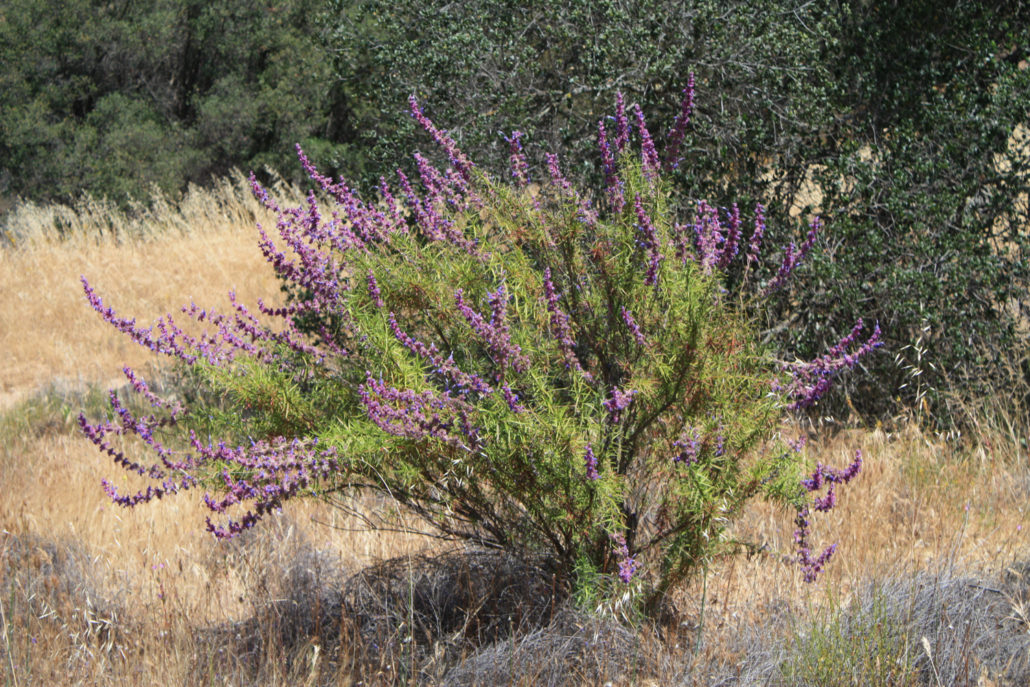 What may be the finest Wooly Blue Curls I’ve ever seen in the wild, on the trails in Paramount Ranch

How Can I Find Out What Parks Are Open in the Santa Monica Mountains?

The MRCA has put together a very welcome Google Sheet that will attempt to stay up to date on all the parklands managed by them, California State Parks, and the National Park Service. You can access the document here, and see which parks are open and which are closed as well as some of the issues facing each park. We should expect longer closures than the Springs Fire experienced just because we’re only at the beginning of the rainy season and much of this landscape may become more unstable depending on how much rain we get and how quickly the rain falls, so definitely check this list before you head out!