How to See Yosemite’s Natural Firefall

If you know about Yosemite National Park, then you know the countless iconic places within the park; Half Dome, Yosemite Falls, El Capitan, Glacier Point, and many others. There is however one thing that gets left out nearly all the time, the naturally occurring Firefall that takes place on the Eastern side of El Capitan during the month of February.

This phenomenon might be one of Yosemite’s greatest hidden secrets as there is no other place in the world you can see this event take place.

The name ‘Firefall’ pays homage to the original Firefall which took place on Glacier Point from 1872-1968. During those years the Glacier Point Hotel would burn wood at the top of Glacier Point, and at 9pm every night would push the red glowing embers over the edge, giving the appearance of a waterfall made of fire.

A flyer from Camp Curry advertising the Firefall in 1921.

In January of 1968, George Hertzog, the then Director of the National Park Service ended the Firefall forever due to it being a “man made” event and not “natural.”

While there is no documentation of when the natural Firefall was first noticed, Galen Rowell made it known after his photographs of the sight in 1973 — five years after the original Firefall was laid to rest. Perhaps that’s just the way it was meant to be.

The Natural Firefall can usually be seen during the middle weeks of February if the conditions are right. Snowpack in the High Country must begin to melt down 1,570ft Horsetail Fall while the sun must have a clear path to the waterfall as it sets to the West.

While these two things must happen, there are several things that need to not happen for the firefall to appear. If there’s not enough snow, or the temperatures aren’t high enough for the snow to melt, there won’t be a waterfall. Clouds in Yosemite Valley or further west can block the sun or the fall itself, and a lack of red color in the sky means the Firefall itself may take place, but its color will be nothing more than a thin, golden line.

While Horsetail Fall can be hard to see with the naked eye – especially in recent years due to drought – you can usually begin to see it the closer you get to sunset, or if you zoom in close enough with a telephoto lens during the afternoon.

At the start of the Firefall, the Eastern side of El Capitan will look like a golden thick ribbon, but as the sun begins to set, you will notice it begin to slowly creep in further and further until it reaches Horsetail Fall.

This usually begins to take place around 15 minutes before the peak of the Firefall. During this time it’s easy to give up, especially if there is some cloud cover as the Fall and El Capitan itself begin to dim and turn gray – almost as if the sun has already set. A lot of photographers at this time become foolish and leave, thinking the event won’t take place, but it sometimes occurs later than expected so make sure to stick around. This year, while the sun was said to set at 5:30, the Firefall itself didn’t occur until nearly 15 minutes later.

There are various locations to shoot Firefall within Yosemite National Park, but the most popular are at the El Capitan Picnic Area and on Southside Drive between the Cathedral Picnic area and Sentinel Beach Picnic area. It’s the only place with two turnouts directly across from each other. If you can’t find it, don’t worry, just look for the other cars parked there, along with about 100 cones blocking off a lane for Special Event Parking.

There are a few other locations to shoot from within the park. Four Mile Trail is a great place to set up your camera, but depending on weather it can be dangerous due to snow and ice. As a general rule of thumb, anywhere East of the El Capitan picnic area that will give you a clear view of Horsetail Fall should work. 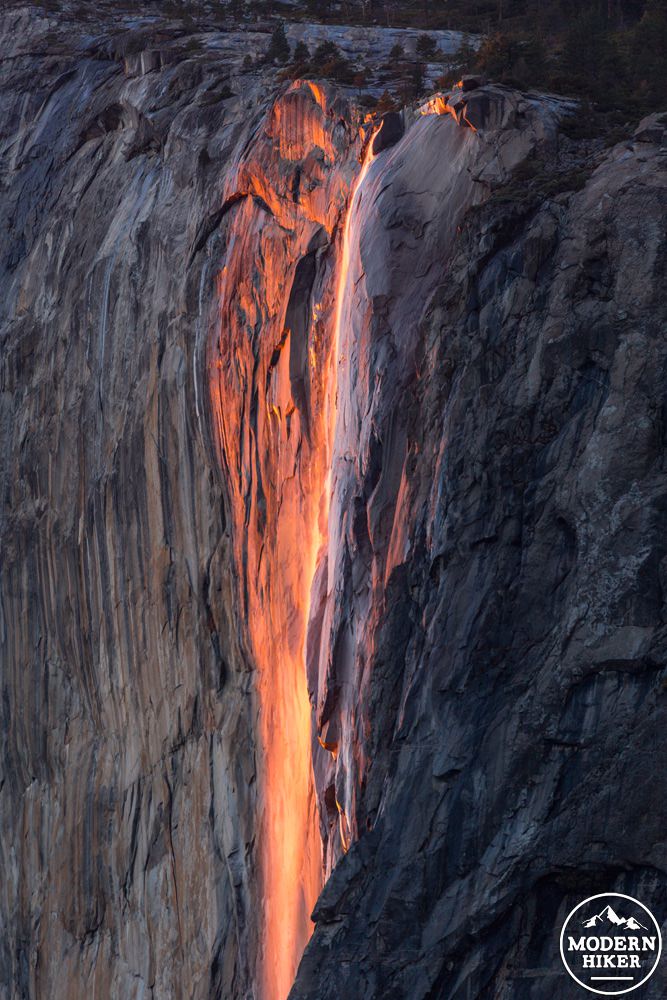 If you are close to the Fall, you’ll want a wider angle lens. I prefer to shoot with a 70-200mm on a full-frame sensor. If you are using a cropped sensor, you might want something wider like a 24-105mm. From further distances, such as the Southside Drive area, you’ll want something longer. A 300mm on a full frame, or a 70-200mm on a cropped. Be sure to use a tripod so the shot is steady. During sunset the lighting, depending on your location, can be very slim, meaning longer exposures that are tough to take hand held.

Get there early to claim your spot. I have several ‘special’ locations I choose when shooting Horsetail Fall – and while the event doesn’t take place until 5:20-5:50, I am sure to be in my locations and set up by 2:30pm. Typically I bring snacks and drinks. Keep in mind there aren’t bathrooms close by unless you are shooting at the El Capitan Picnic area.

While shooting be prepared for anything. I have had several wildlife encounters from deer to coyotes, including a bald eagle spotting. This past year was also filled with multiple base jumpers from El Capitan. Two on Monday the 9th, and one on Sunday the 15th. Keep in mind base jumping is illegal in Yosemite National Park and the rangers were out looking for them immediately.

While the Firefall officially is brightest during the third week of February, don’t limit yourself to just that timeframe. This past season waterflow was best during the second week, and by the third it was nearly all dried up. You can also see Firefall the first two weeks as well, though the lighting may not be best for that red/orange glow. The last week usually is your last chance, but keep in mind the falls could be dried up completely by then, and if not, the red/orange color will most likely be nothing more than golden.

Firefall can happen from October-February at anytime as long as the sun can hit the Eastern Side, and water is flowing down Horsetail fall (from Nov-Jan usually rainstorms).

If you live near Yosemite or are planning a visit during the months of February, this is an absolute MUST-DO on your list. While you can always see El Capitan, Yosemite Falls, and Glacier Point, you can only see the Firefall when it wants to be seen, making it one of the more special hidden gems in a National Park that’s filled with amazing sights.