Rancho Palos Verdes — a tony neighborhood with beautiful coastal views, unique geology, and some of the loveliest hiking in southwestern Los Angeles County — is already known as a tough spot to hike. Due to increasing use of the outdoor resources in the city, it might become more difficult to hike there if you don’t happen to own property nearby.

Back in 2015, the city red-striped places where most visitors parked to access Del Cerro Park after residents complained of unspeakable urban horrors like noisy car doors slamming and chatty hikers. Although the city was insistent this was not the goal, the move effectively blocked the public who didn’t live nearby from accessing a public park. 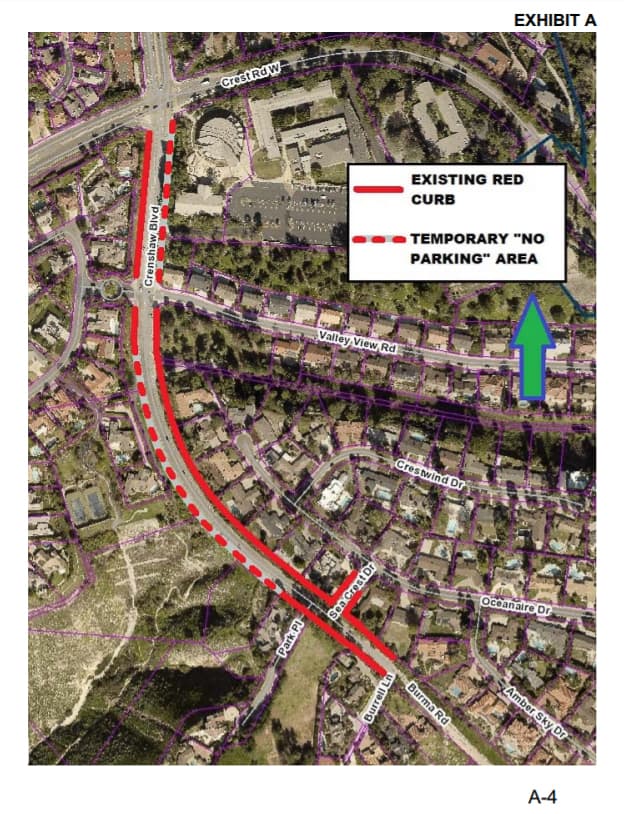 In August, the city temporarily blocked off even more of the available free parking, after a meeting where essentially only homeowners registered their opinion on the matter. Now, those restrictions may become permanent … and parking significantly more expensive.

In a posted meeting agenda set for October 20th, the permanent parking ban is one of the proposed items. Another item is an increase in proposed parking fees — from $30 to $50 for four hours. And you thought parking near the Griffith Observatory was expensive!

In case you were wondering about taking the “well I just won’t pay” tactic, they’ve got that covered, too. The City is investigating a 3 to 1 fine ratio for the fees to act as a deterrent, meaning you might come back from your hike with a $150 ticket on your windshield.

The site Legal Planet notes that the adjacent Palos Verdes Nature Preserve were purchased with and are funded by state and county funds. Del Cerro serves as a popular gateway to these lands. On weekends and holidays, a vast majority of visitors are from non-residents.

An in-person and virtual meeting on this topic will be held on Tuesday, October 20th at 7PM. You can no longer submit written comments but you can still sign up for in person or virtual comments or leave voice comments by heading to this website. 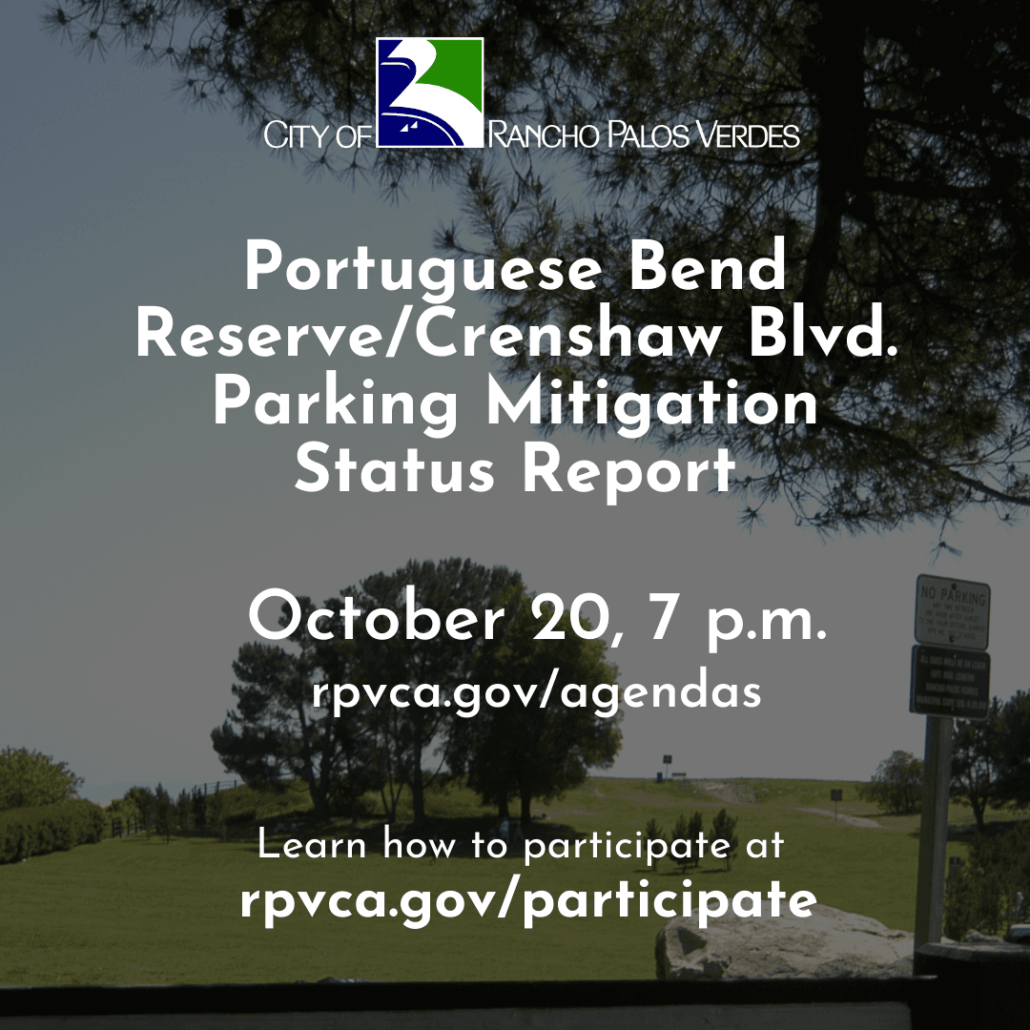 We received a message from the Rancho Palos Verdes department of Recreation, Parks, and Open Space. It is presented below in its entirety and without edits.

Rancho Palos Verdes City Staff has read the article attached, and it contains many inaccuracies, and we would appreciate corrections. The topic of public access to the City’s open space areas is very important to the City, and the City is working hard to find solutions to address access needs and concerns in a balanced and holistic way. Having a public that is educated on and engaged in the topic will help us find more balanced and effective solutions.

The location you mention in the article is referring to 2 of other access points to the Palos Verdes Nature Preserve. This location is Crenshaw Blvd. south of Crest Rd. and serves as the primary trailhead to the Portuguese Bend and Filiorum Nature Reserves. A common misconception the public has is that the entire 1,400-acre Palos Verdes Nature Preserve IS Portuguese Bend Reserve. However, Portuguese Bend Reserve is 1 of the 12 reserve properties located throughout the City. The City is trying to disperse public use to some of the other 10 reserves, and especially to those reserves that have parking and amenities to support public use, such as restrooms. The City has been using social media and signage at Portuguese Bend Reserve to encourage the public to try alternate reserve locations, rather than focus use on this area not designed to handle the quantity of visitors it currently sees.

Parking conditions on Crenshaw Blvd. south of Crest are not functional at this time. This section of road dead ends in a residential area that has arguably become the most popular entry point to the City’s trail system when it’s not the only entry point. It was not designed for the level of use it gets. Moreover, over the past ten years, use has increased substantially largely due to word spread through social media, and more recently use has increased even more after the County lifted health orders to close trails. This increase in use following the lifting of the orders has been seen County-wide.

We would appreciate retraction of the statement that the City is trying to make it harder for the public to access trails. The City is one of the few jurisdictions that have completed the California Coastal Trail along its entire coastline in partnership with the California Coastal Conservancy with the goal of enhancing public access to the coast. Additionally, the City provides public access to beaches and trails along its coast through five public parking lots, four of which provide free parking. Additionally, since the creation of the Preserve in 2008, it was and has always been the City’s intent to provide access to all. You can review staff reports presented to the City Council between 2006 and 2009 on the Palos Verdes Nature Preserve.

The article states that the City has blocked access to its trails through red curbing. However, despite the permanent red curbing, and the temporary red curbing closest to Del Cerro Park, there are still approximately 45 free public parking spaces on Crenshaw Blvd south of Crest Rd., and more than 100 spaces north of Crest Rd., which is an approximately ¼ mile walk to the nearest of the two trailheads. The staff report also shared that the City is looking into opening up additional parking for the Portuguese Bend Reserve such as at the Rancho Del Mar School site.

The article states the City Council will be considering charging $30-$50 to park on Crenshaw Blvd. south of Crest Rd. However, staff is not recommending those fees. Rather, staff is recommending City Council direct staff to engage a consultant to explore parking solutions, and at a later time bring back a recommended fee for City Council consideration. As indicated in the staff report, “A possible approach is a $30-$50 total charge for a 4-hour block of time on Crenshaw Boulevard south of Crest Road.” Moreover, as you read on in the staff report under the discussion of possibly utilizing Rancho del Mar (again possibly), it states “Such costs can be offset if the City charged a flat fee for parking at this location which in order to be effective and enticing to visitors would have to be significantly less than parking on Crenshaw Blvd.” I am pointing this out because the intent here is to look at the solutions under consideration holistically not individually. When you do that, you will see that the city is trying to strike a balance between preserving the quality of life and providing public access.

Your article references information posted in an article on Legal Planet as to how the City received funding for our Nature Preserve. Much of the information in the Legal Planet article is inaccurate, and the City requested a correction from the author. The City received the majority of its acquisition funding for the Preserve from state and federal sources, as well as some County sources. Please see link below on Preserve management, why public access to the Preserve is conditional, and actions the City takes and funds to keep the Preserve open to the public. (Specifically see #s 14, 19, 20, 24, and 31)
https://www.rpvca.gov/DocumentCenter/View/15076/FINAL-Master-and-Specific-Responses-Combined-10-10-19-Formatted

Please help us spread correct information so that the public, who is invited to participate, understands what is being considered based on facts. The City has used public notices in newspapers and at trailheads and social media to engage the public on this topic. The more the public is informed on and engaged in this topic, the more constructive feedback the City will receive to help us find solutions. The City is trying to strike a balance between public access and resident quality of life while being mindful of impacts to natural resources.

It is not too late for the public to make a statement for the October 20th City Council Meeting. To do so, please send emails to the City Council and Recreation and Parks Department at [email protected] and [email protected]. All correspondence received will be entered into the record and will be viewable at the City Council Meeting as late correspondence. I’ve attached our public notice on the agenda item. It contains additional information and how to participate in the meeting. Please feel free to reach out to me directly with any questions or for more information.