If you dream of traveling to Big Sur, but don’t want to load the mileage on your car, here’s your consolation prize: a local getaway to sweeping ocean vistas, towering craggy cliffs, and churning teal seas via a six-mile round trip from the top of Palos Verdes’ Portuguese Bend Reserve to sea level at Sacred Cove.

Visible from high points across the Los Angeles basin and nearby mountains, the Palos Verdes peninsula juts out in an unmistakable hump from the otherwise flat shoreline. Perhaps best known for its multitude of affluent communities and Lloyd’ Wright’s serene Wayfarers Chapel, it might not be the first place that comes to mind when you think of hitting the trail, but if you love ocean views and wild waves, make your way to the very end of Crenshaw Boulevard, park at Del Cerro Park or in the neighborhood, and lace up your boots – you’re about to step away from manicured lawns and into something a bit more rugged and wild. 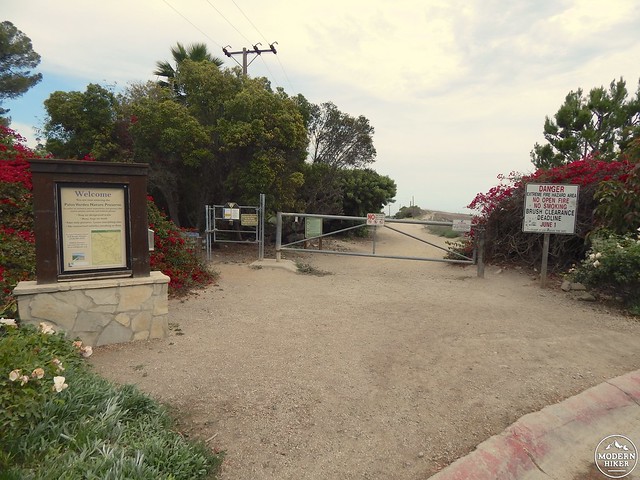 Start your adventure by skirting a gate at the end of Crenshaw, heading southwest on a wide dirt track (Burma Road) that was once a planned extension of the boulevard. As you’ll quickly notice, you’re perched on an undulating slope crossed with a latticework of trails housing not just hikers, but also bikers and people on horseback. In the wetter months, the hillside is grassy and vibrant, studded with wildflowers – but even if you come in the drier, more beige months, it’s still fascinating to people-watch as you move through the coastal scrub. 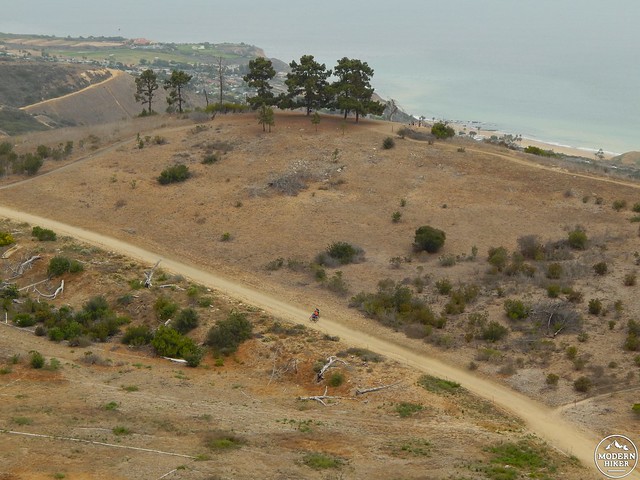 When you’re done looking down at the network of trails, shift your gaze up and out to the Pacific Ocean, where you’ll see Catalina Island’s twin masses floating on the blue horizon. Since the first part of the trail meanders through some not-always-stimulating scenery, let this be your beacon of inspiration as you make your way down in elevation. 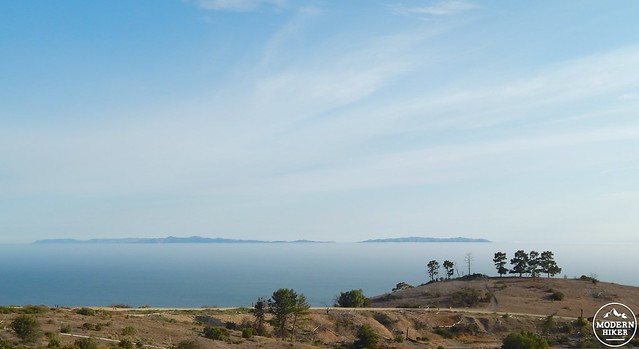 At just over half a mile, you’ll hang a right onto the Peacock Flats Trail, a shortcut that rejoins Burma Road a few minutes downhill. Once you hit this section, you’ll lose your ocean views for a bit, so focus on keeping an eye out for signs of the abundant wildlife that call the Reserve home. The day we hiked, I spied several cottontail rabbits, a small army of western fence lizards, and one very lackadaisical rattlesnake. 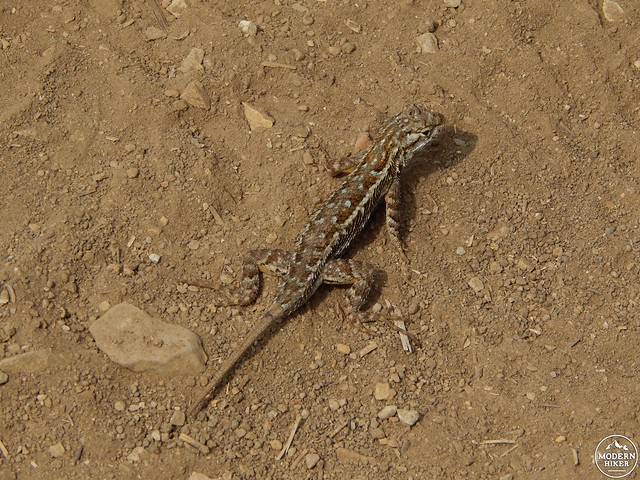 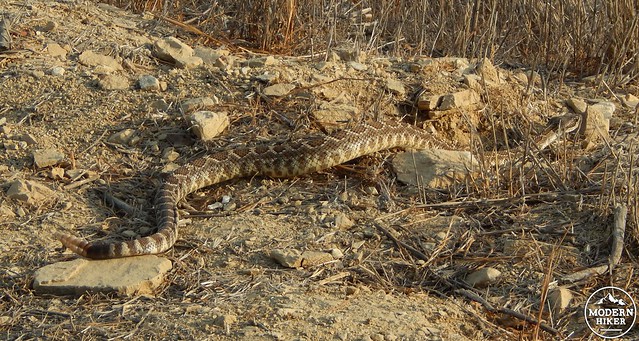 One of the cool things about this area is that it’s a bit of a choose-your-own-adventure experience – while the trails are well-signed (look for a brown metal stick at intersections), you don’t need to worry if you stray from your intended path (like we did) – as long as you’re headed down and slightly away from the cliffs to your left, you’re going to end up at the ocean. That said, to do the hike as described, you’ll want to stay on Burma Road as it curves past the Kelvin Canyon, Ailor, Eagle’s Nest, and Water Tank trails and pick up the Toyon Trail at about 1.5 miles. From here, it’s a quick right on the Garden Trail, a quick left on the Water Tank Trail on the edge of “civilization,” and another quick left onto the Vanderlip Trail, which keeps you tucked inside the Reserve.

From this vantage point, you can now look up the slope you just descended and see physical proof of the claim that the Portuguese Bend area of Palos Verdes is one of the most geologically unstable areas in Southern California. Huge swaths of hillside lay denuded by the ground’s constant sliding – this area of the peninsula shifts several feet per year, a big enough difference that the section of Palos Verdes Drive you’ll soon cross is repaired weekly! 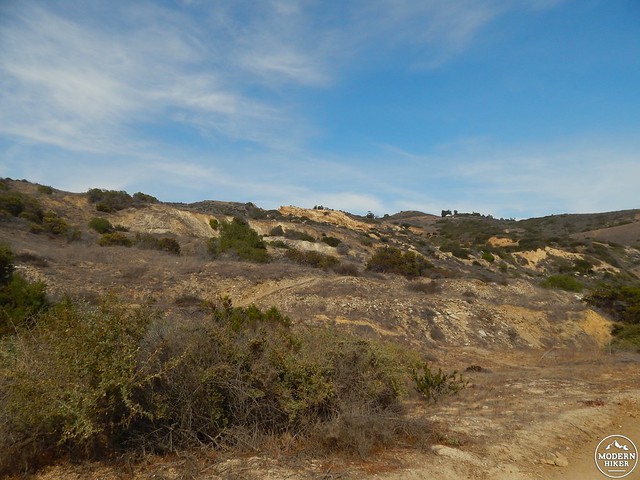 At about 2 miles, you’ll hang a right on the Peppertree Trail, followed by an immediate right onto Ishibashi Farm Trail. Continue through this surprisingly lush area, passing straight through an unmarked intersection, and you’ll pop out at Palos Verdes Drive at about 2.6 miles. There is no light, no crosswalk, and no stop sign here – so be very, very, very careful as you cross to a somewhat unappealing dirt path on the ocean side of the road. Make sure you look back at the trail you just exited, so you know where to re-enter on your way back through the Reserve; once that’s committed to memory, head right to walk west alongside a set of pipes (aboveground because of that whole “constantly shifting land” situation), enjoying the ever-expanding coastal views. 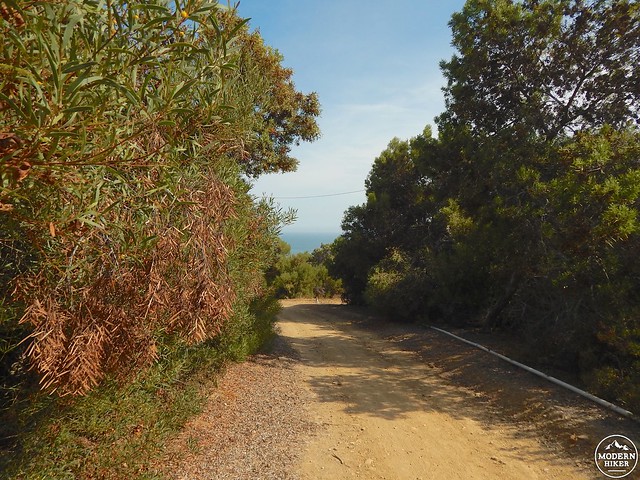 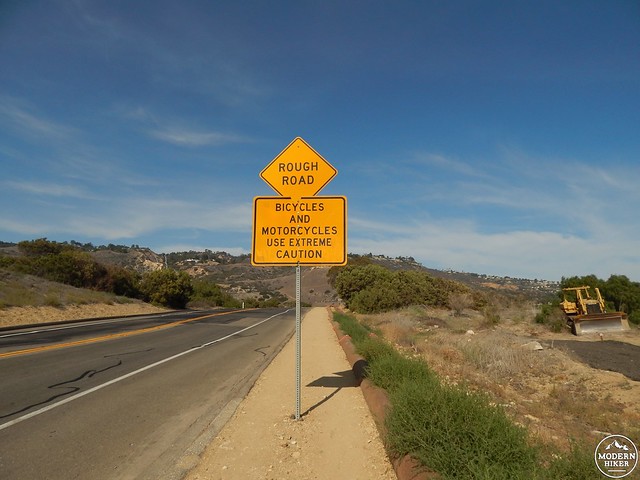 You’ll pass a sign for the South Bay Archery Club and at just over 3 miles, you’ll reach the first entry point for the Sacred Cove Trail. Here you’ll be able to walk straight out onto Inspiration Point, a rather…ok, I’ll say it…inspirational bluff that forms the eastern border of Sacred Cove. The views are pretty incredible, especially on a clear day when the water shimmers a deep teal blue, and if you squint across the shoreline, it almost feels like you’re perched atop a tropical island. 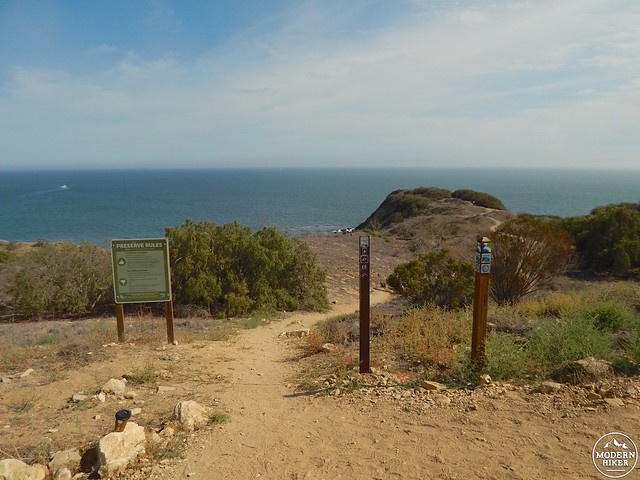 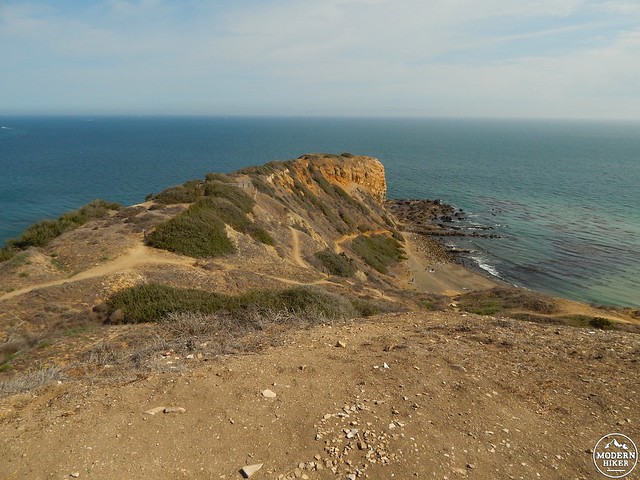 When you’ve had your fill from above, retrace your steps to an intersection you passed on the way up, hanging a left, then another quick left to descend to the beach below via the Cliffside Trail. Aim to arrive here at low tide – not only is this the time when the tidepools and sea caves are most visible, but it’s also the safest time to explore at sea level. The area is home to incredibly rough waters and has seen an absolutely unbelievable number of rescues – and sadly, one death – this summer alone.

Safety warnings aside, this is a beautiful, rugged part of the coast that calls to mind areas like Big Sur and Carmel’s Point Lobos State Reserve – you’ll likely feel miles away from the urban sprawl. While seagulls swoop overhead, carefully pick your way around the exposed tidepools, marveling at their colorful inhabitants – we saw tons of sea anemone, mussels, tiny fish, and sea urchins. 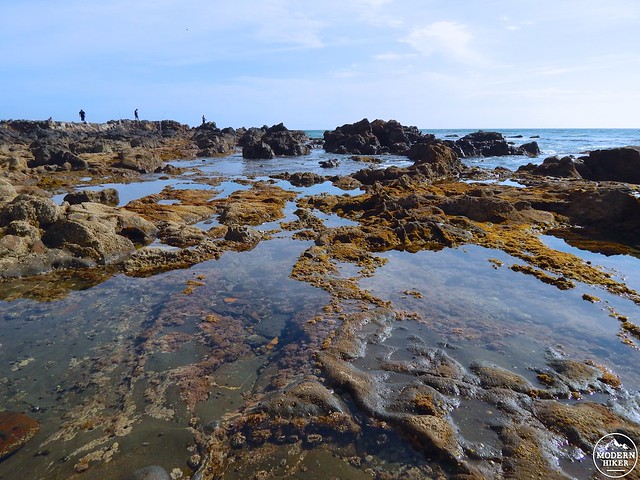 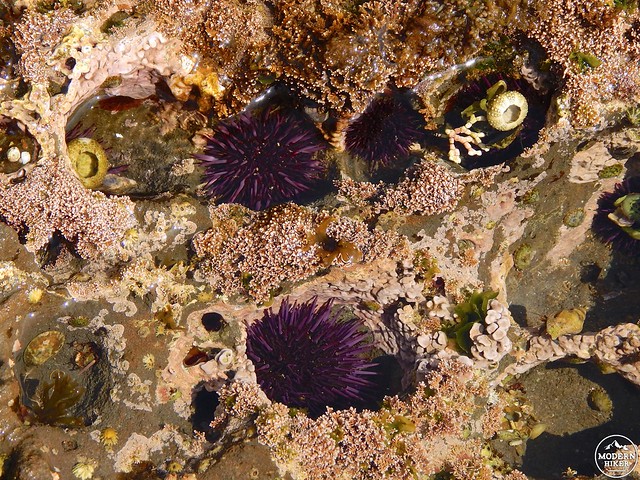 When you’re finished exploring, head back the way you came, sweating your way back up to the top of the Reserve – it’s all uphill from here (and will feel even steeper on a hot day), but as long as you have plenty of water and glance over your shoulder from time to time at those marvelous views, it’s worth every step. 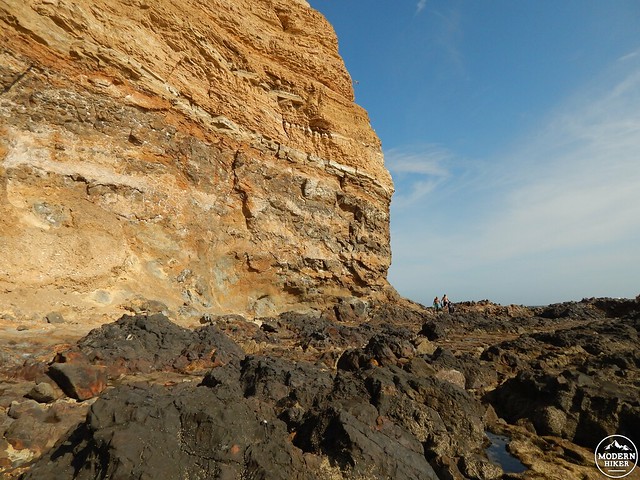 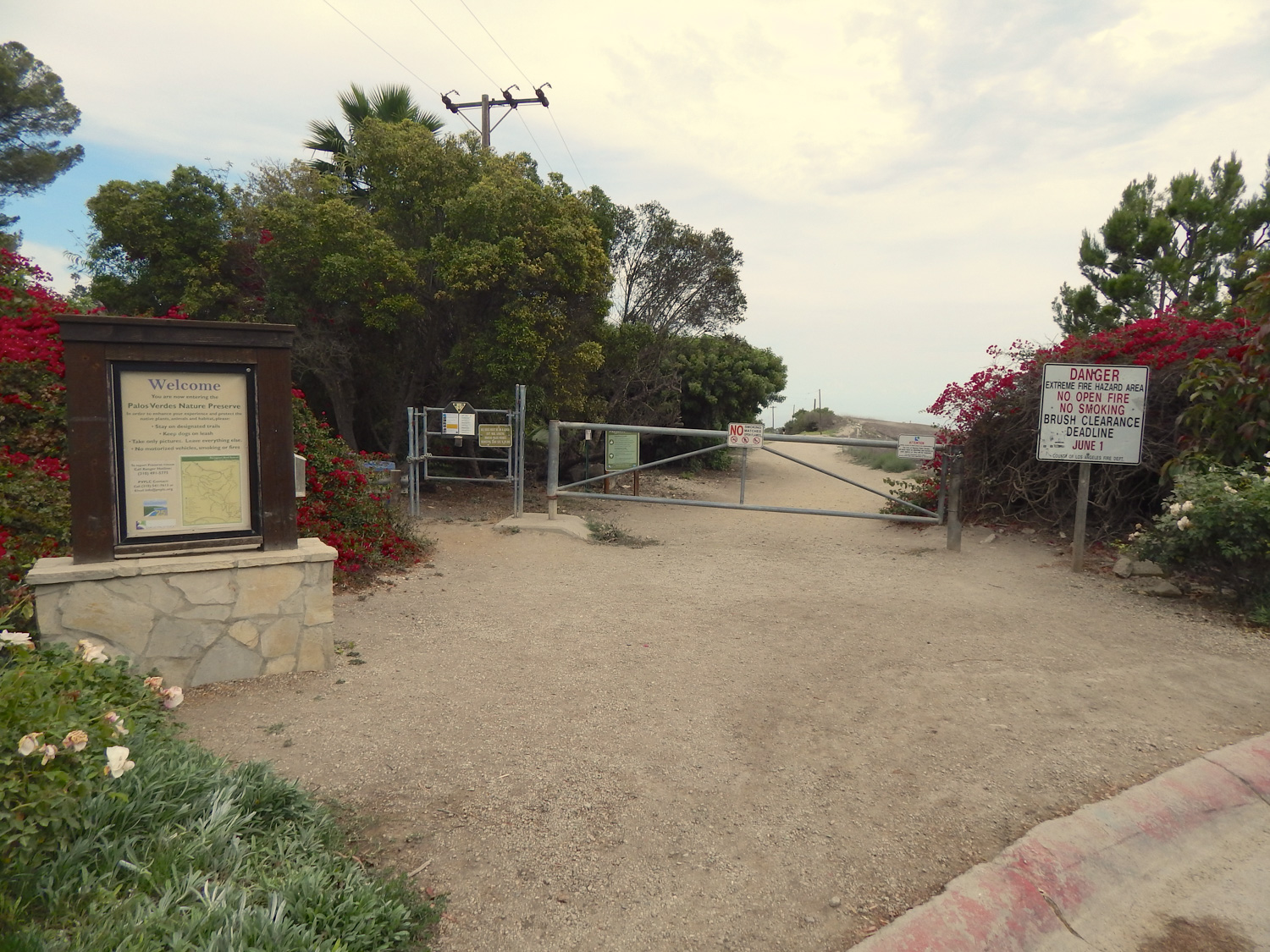 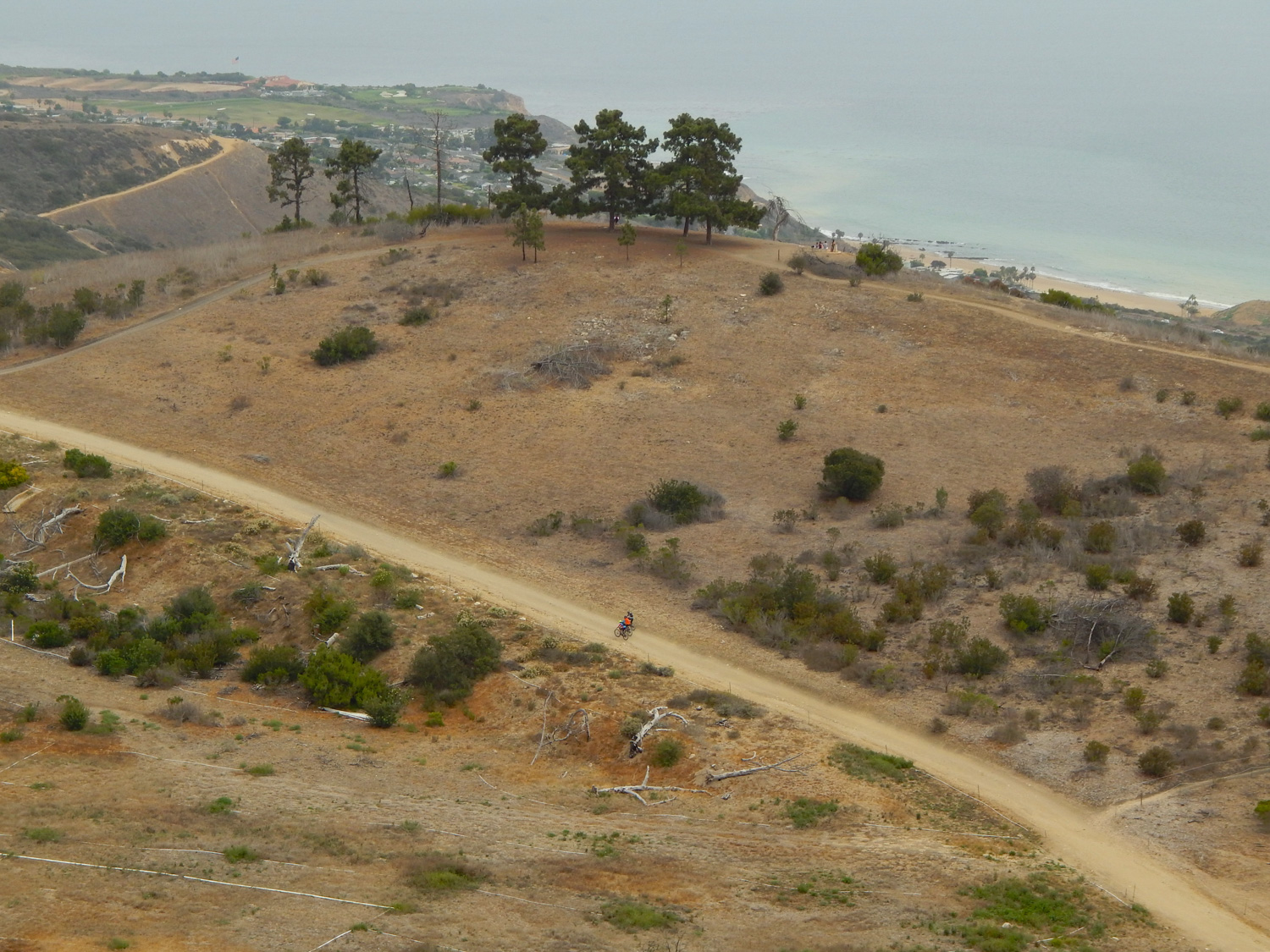 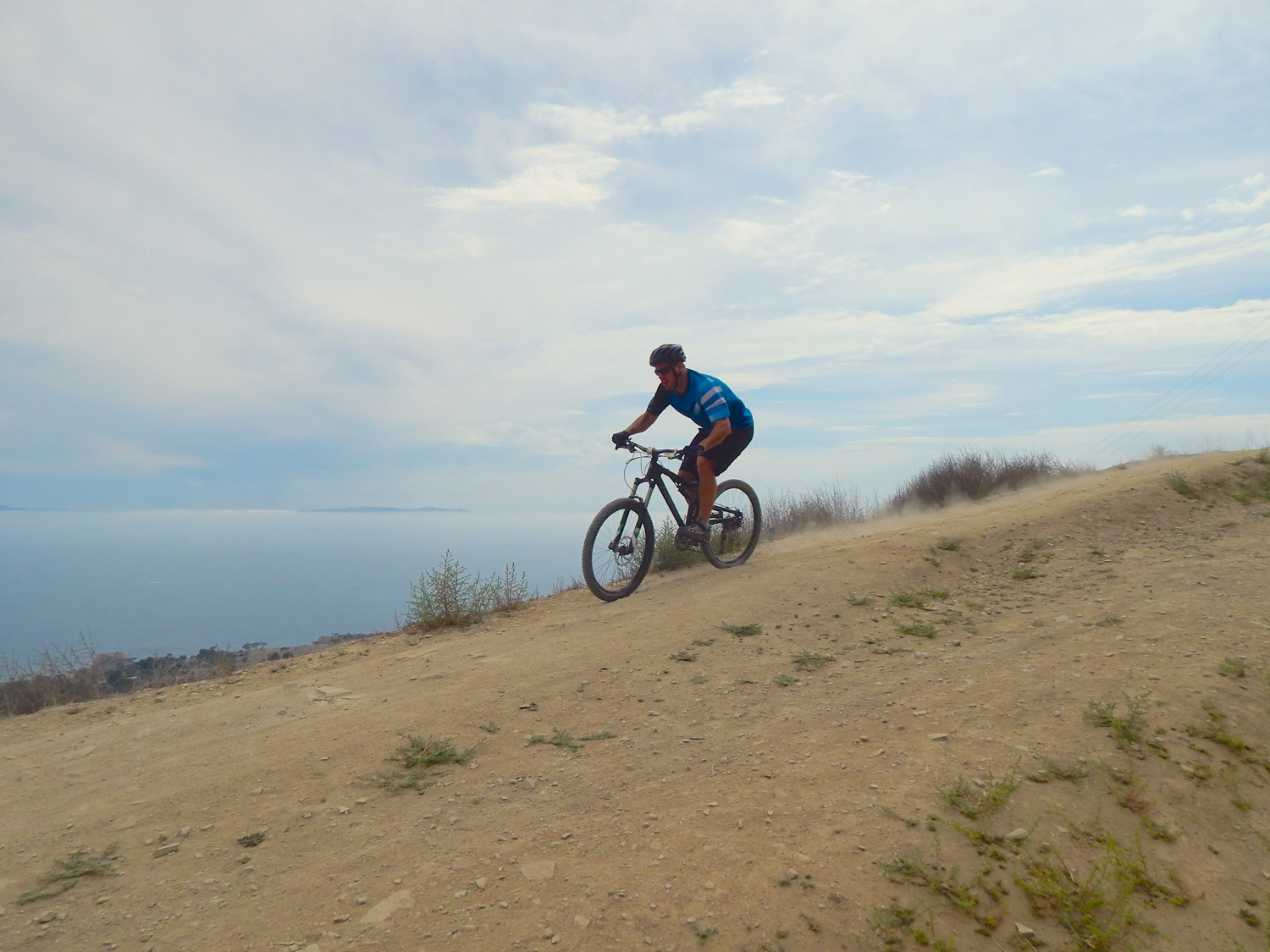 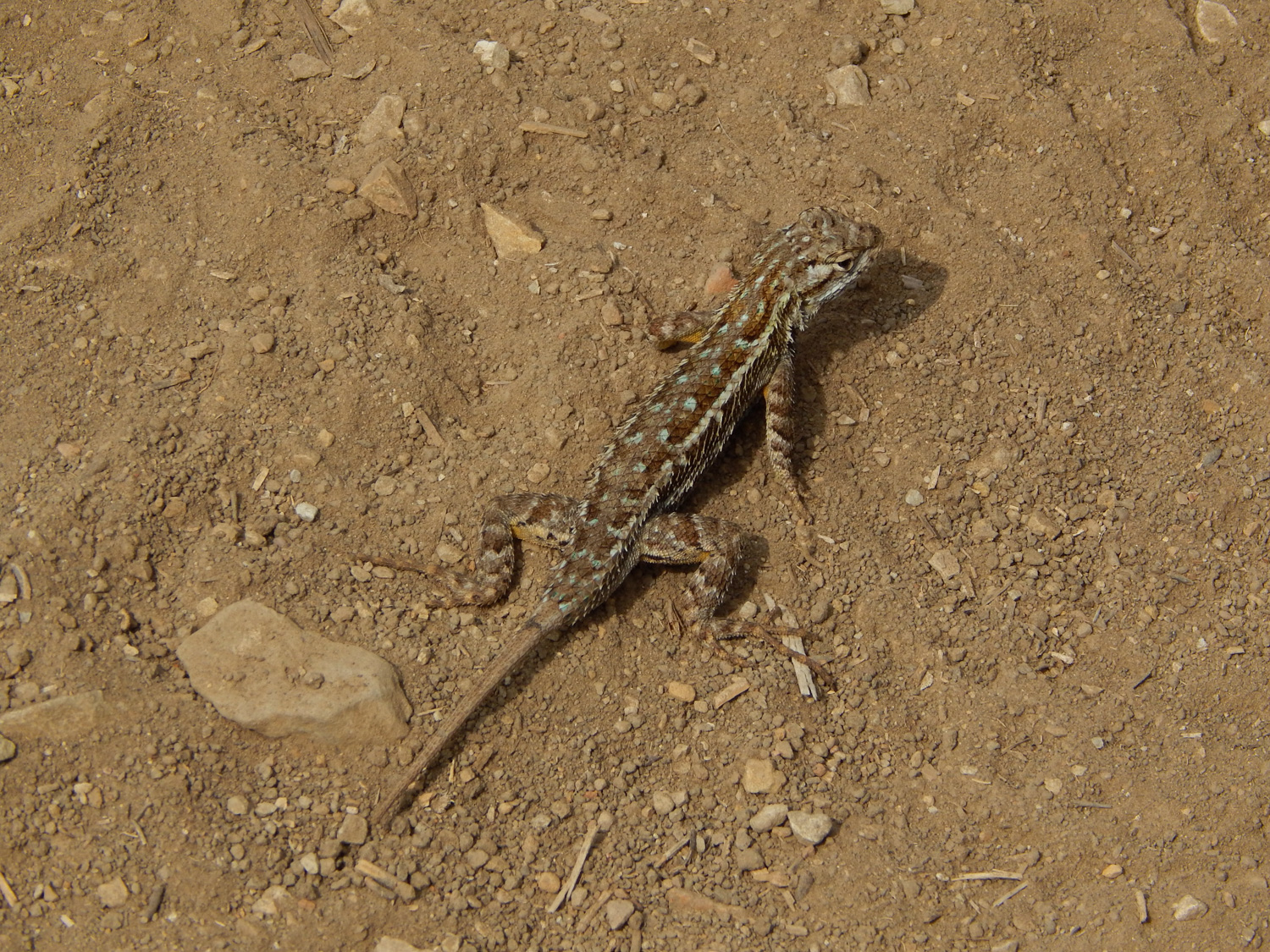 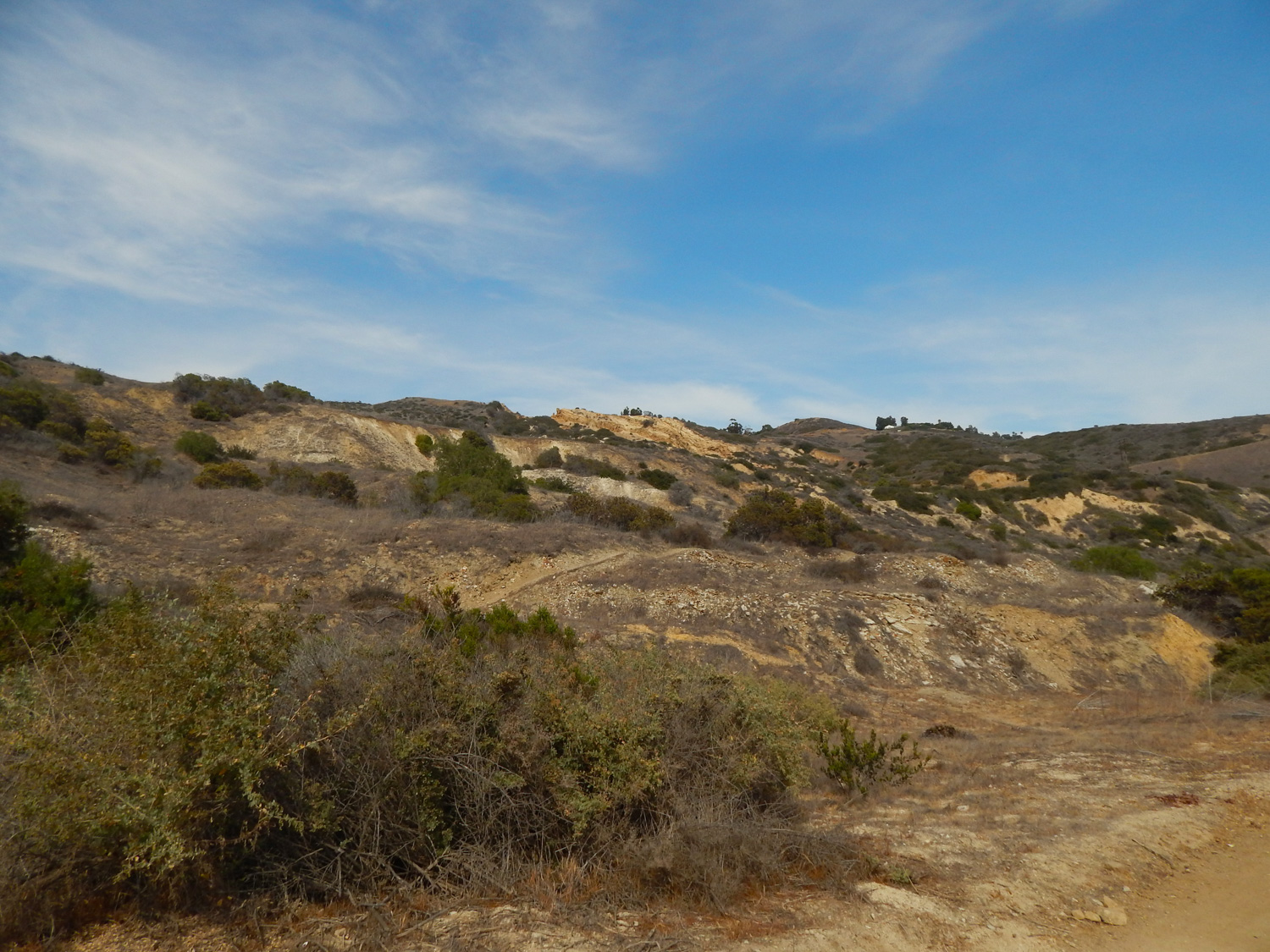 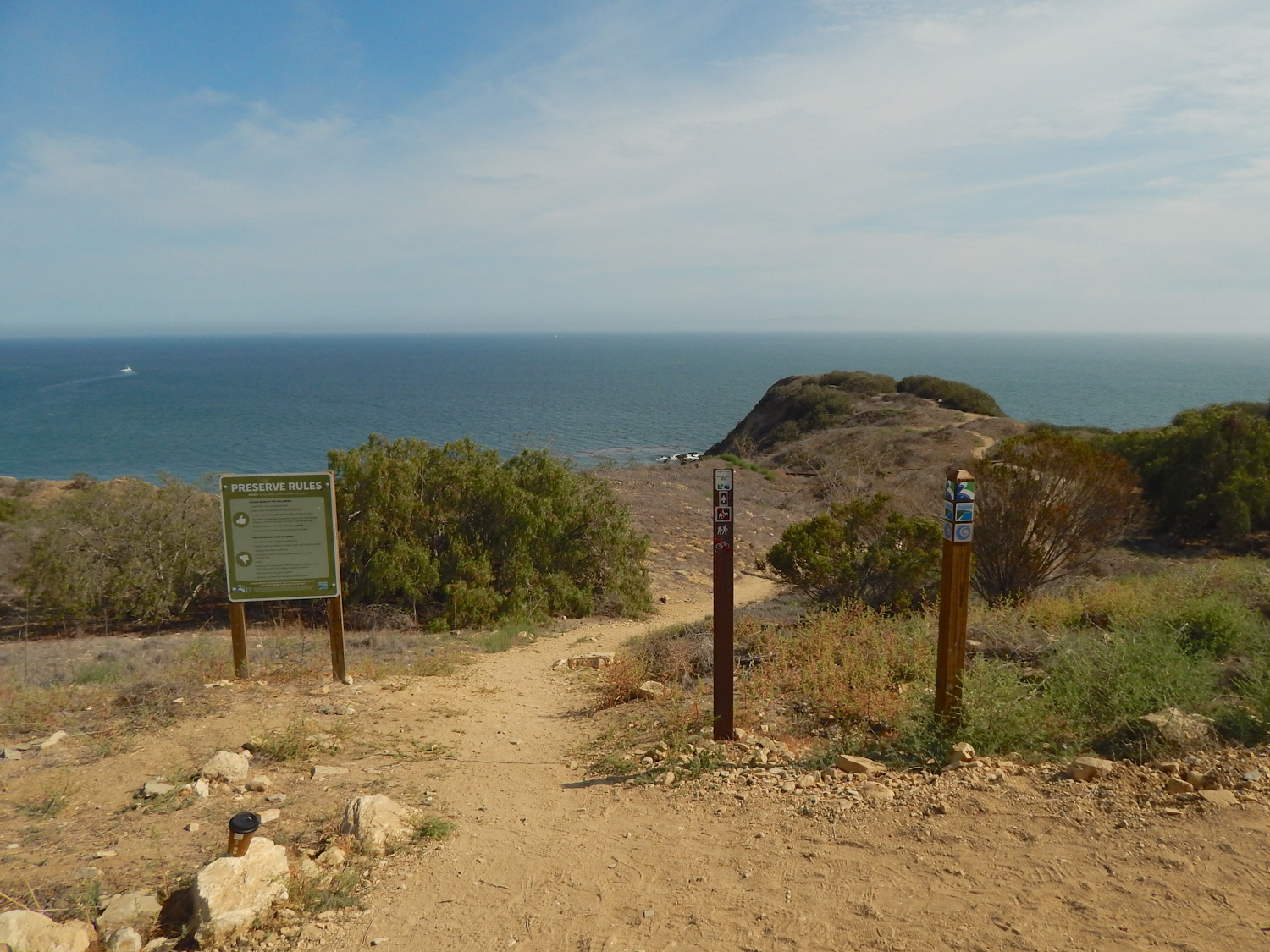 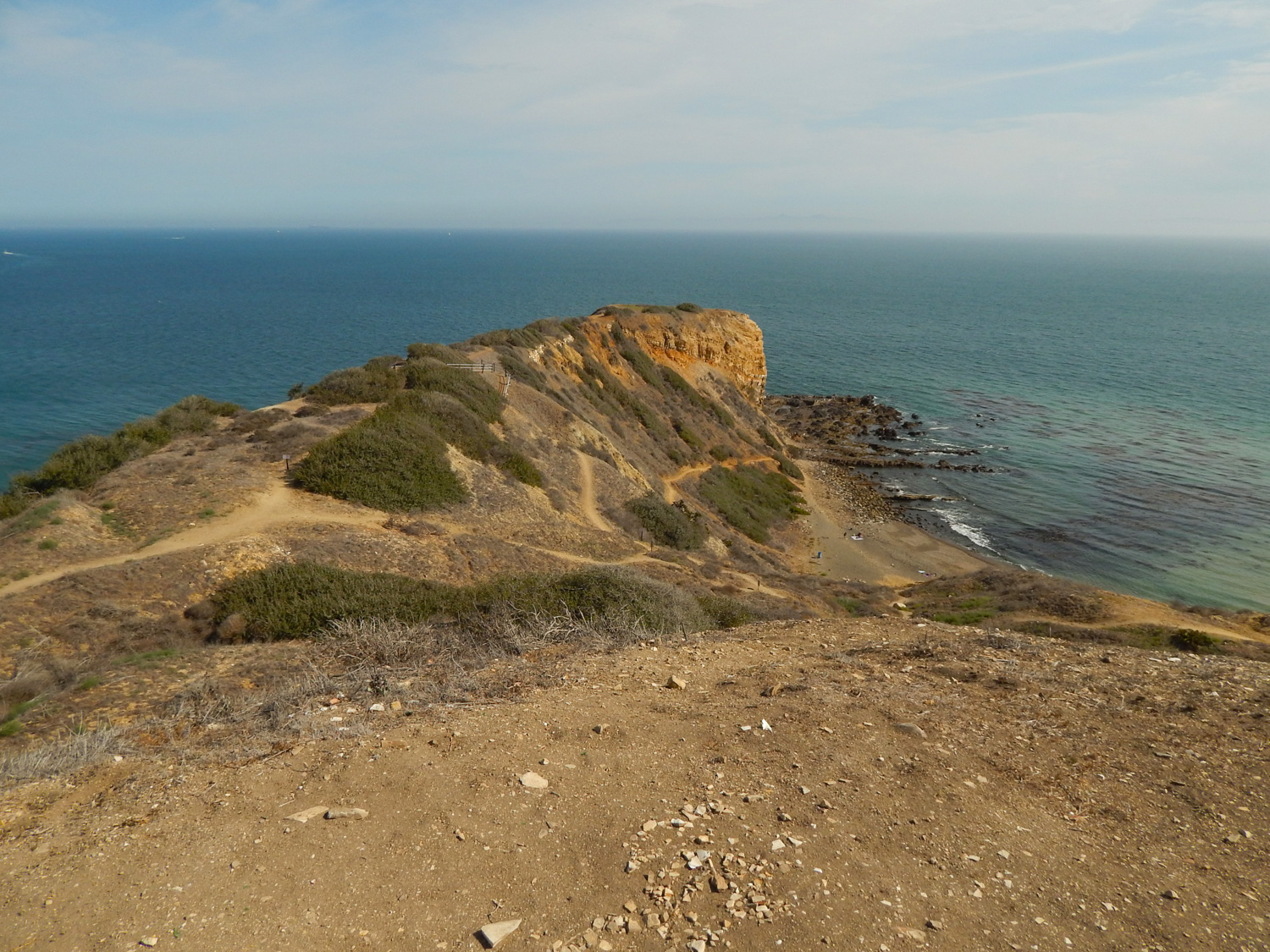 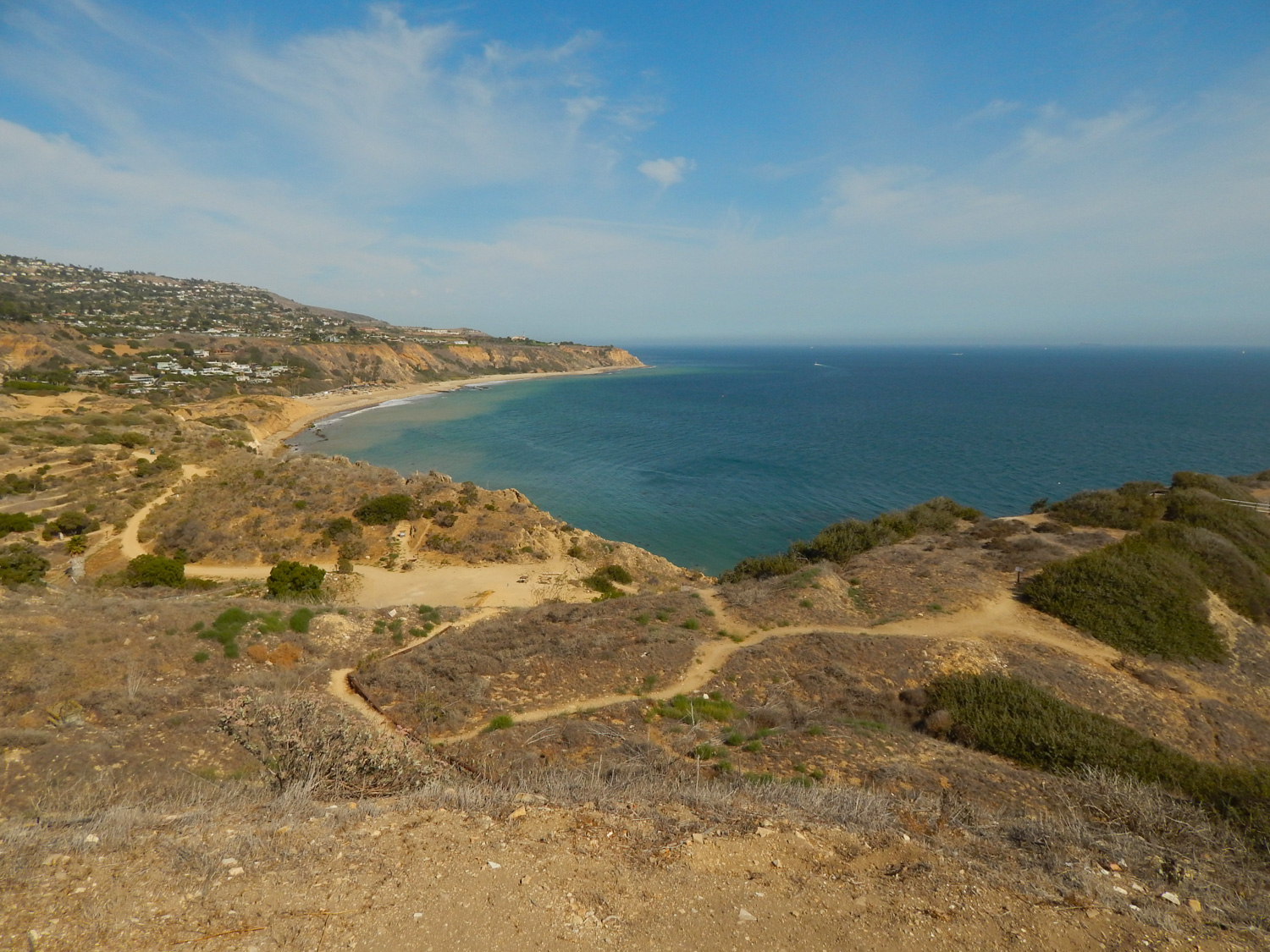 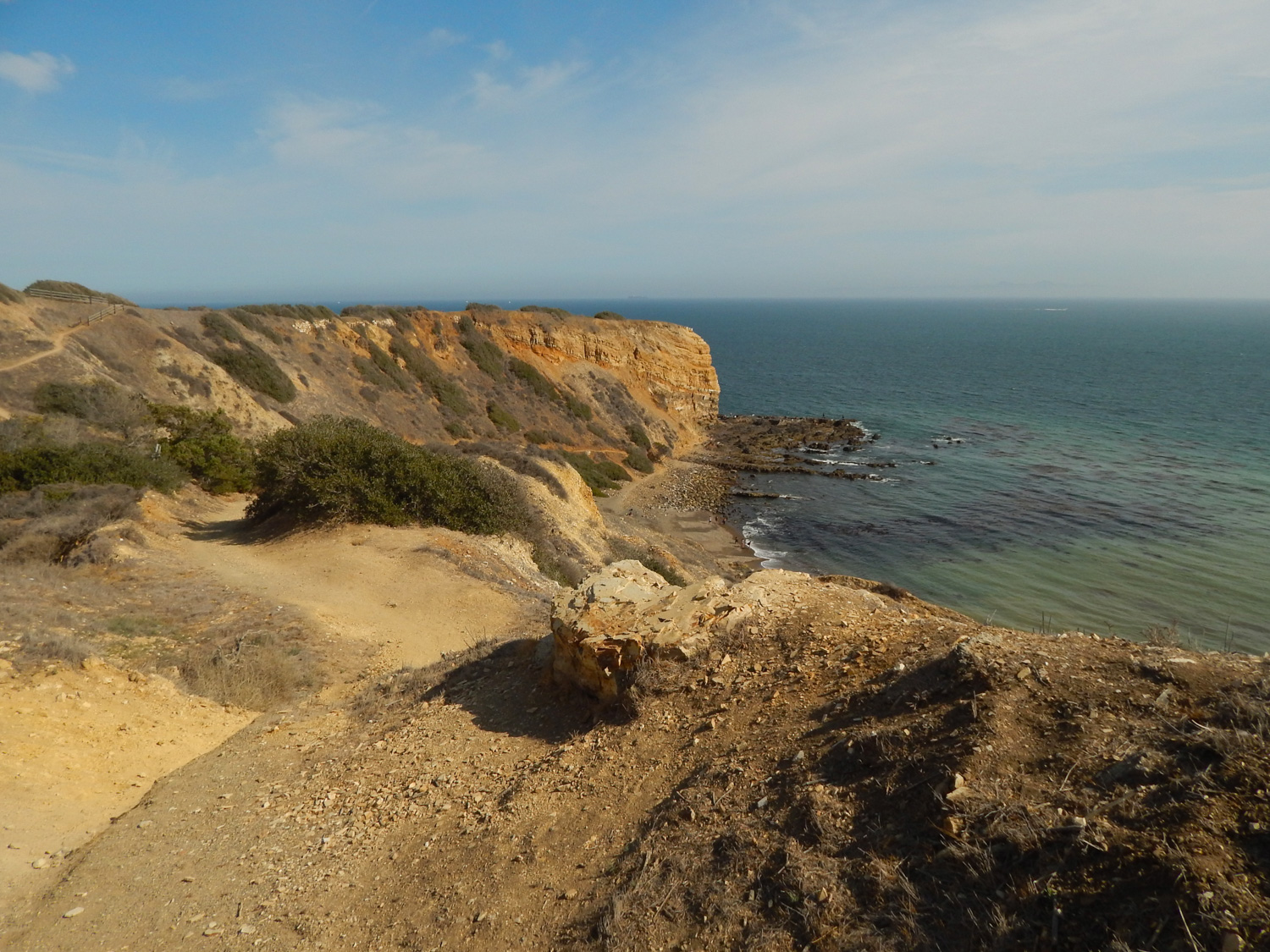 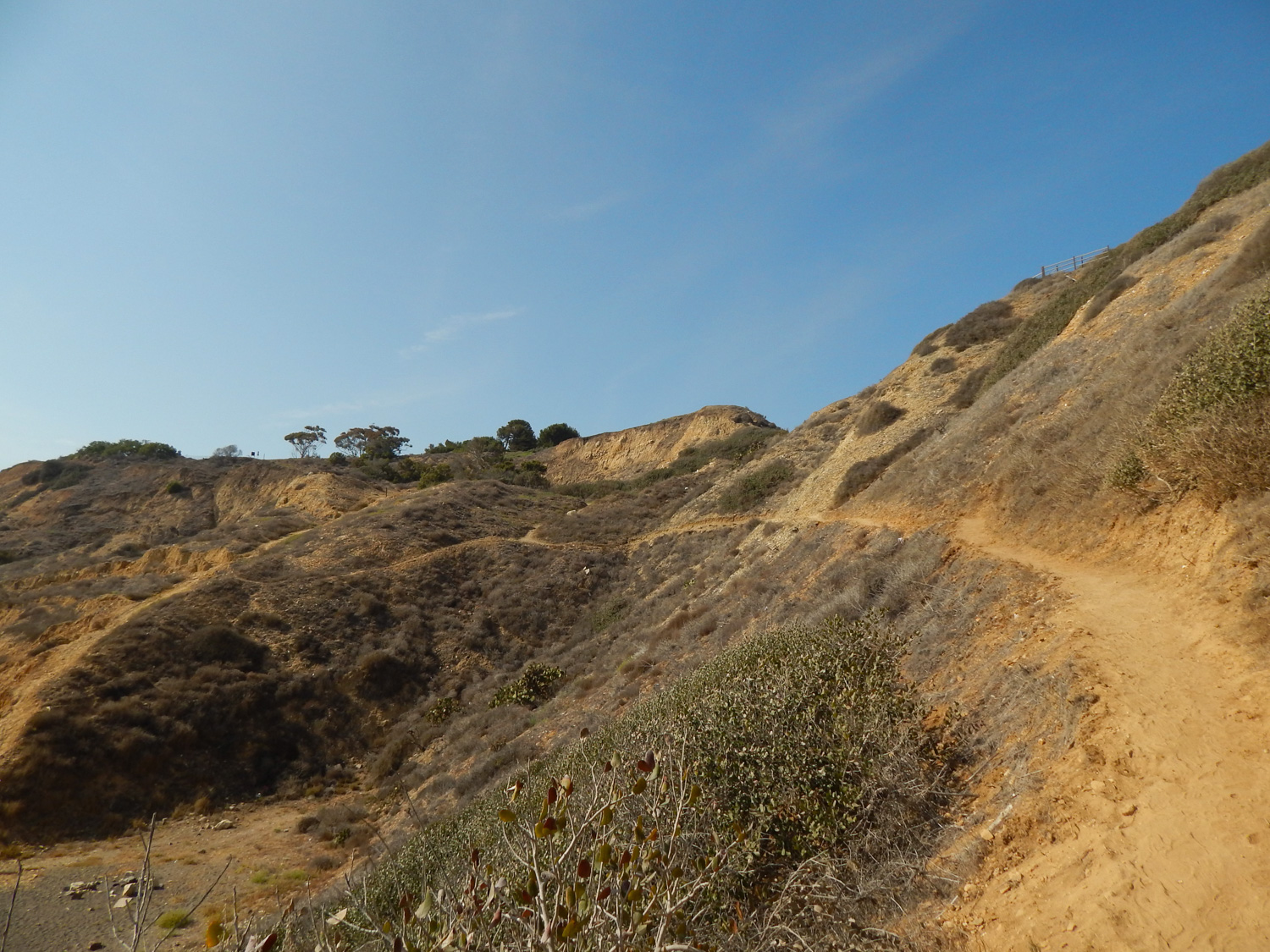 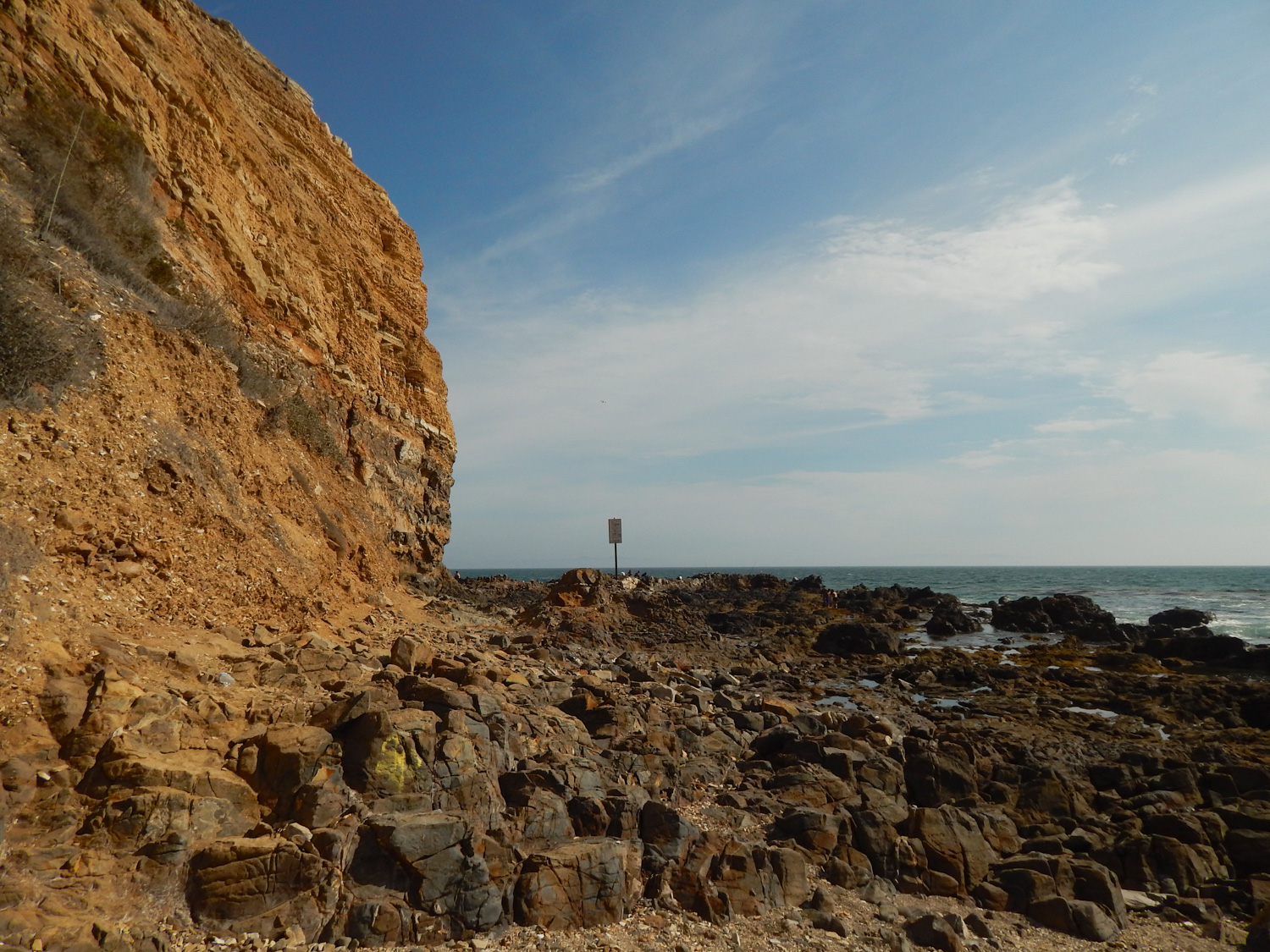 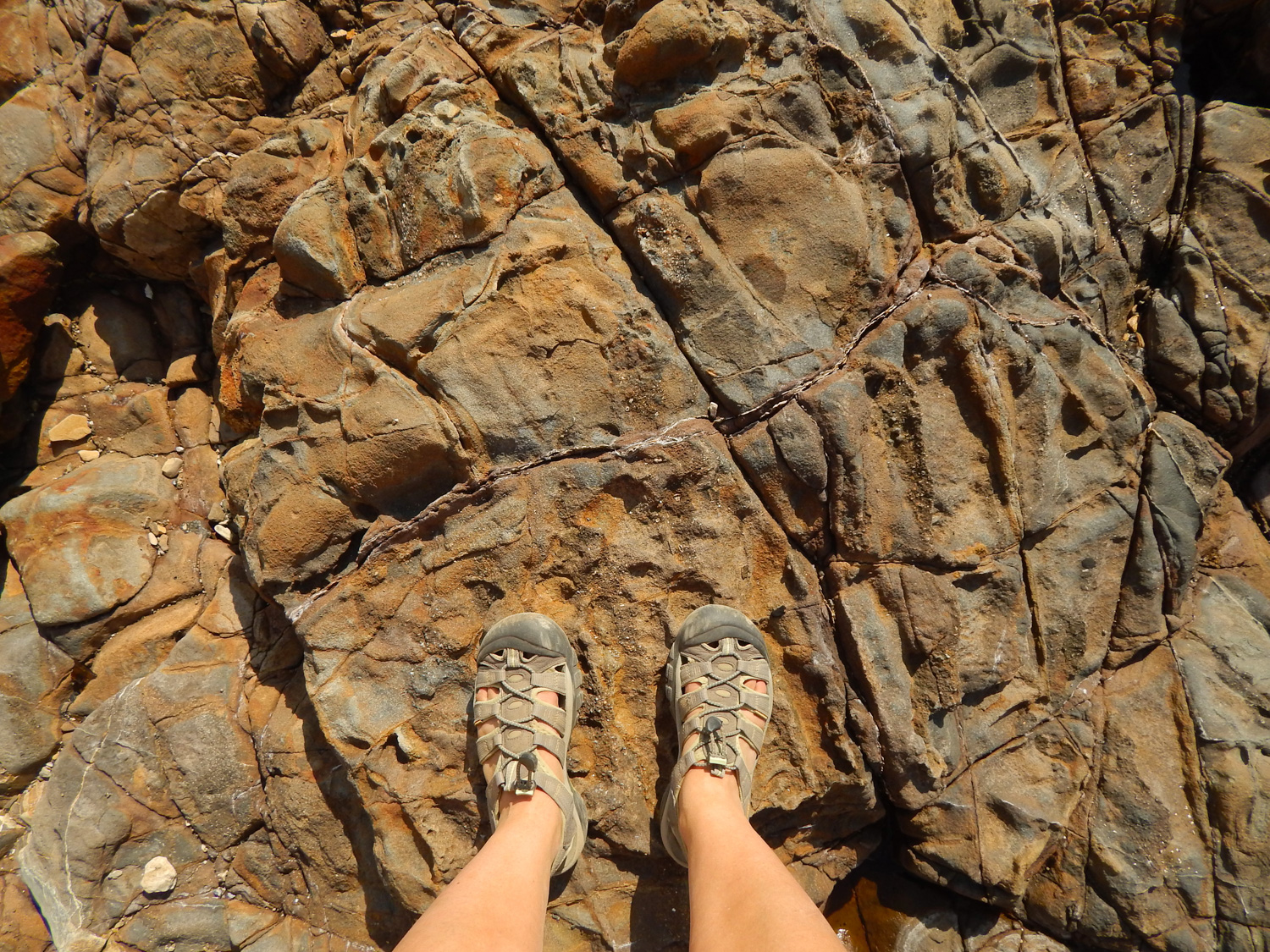 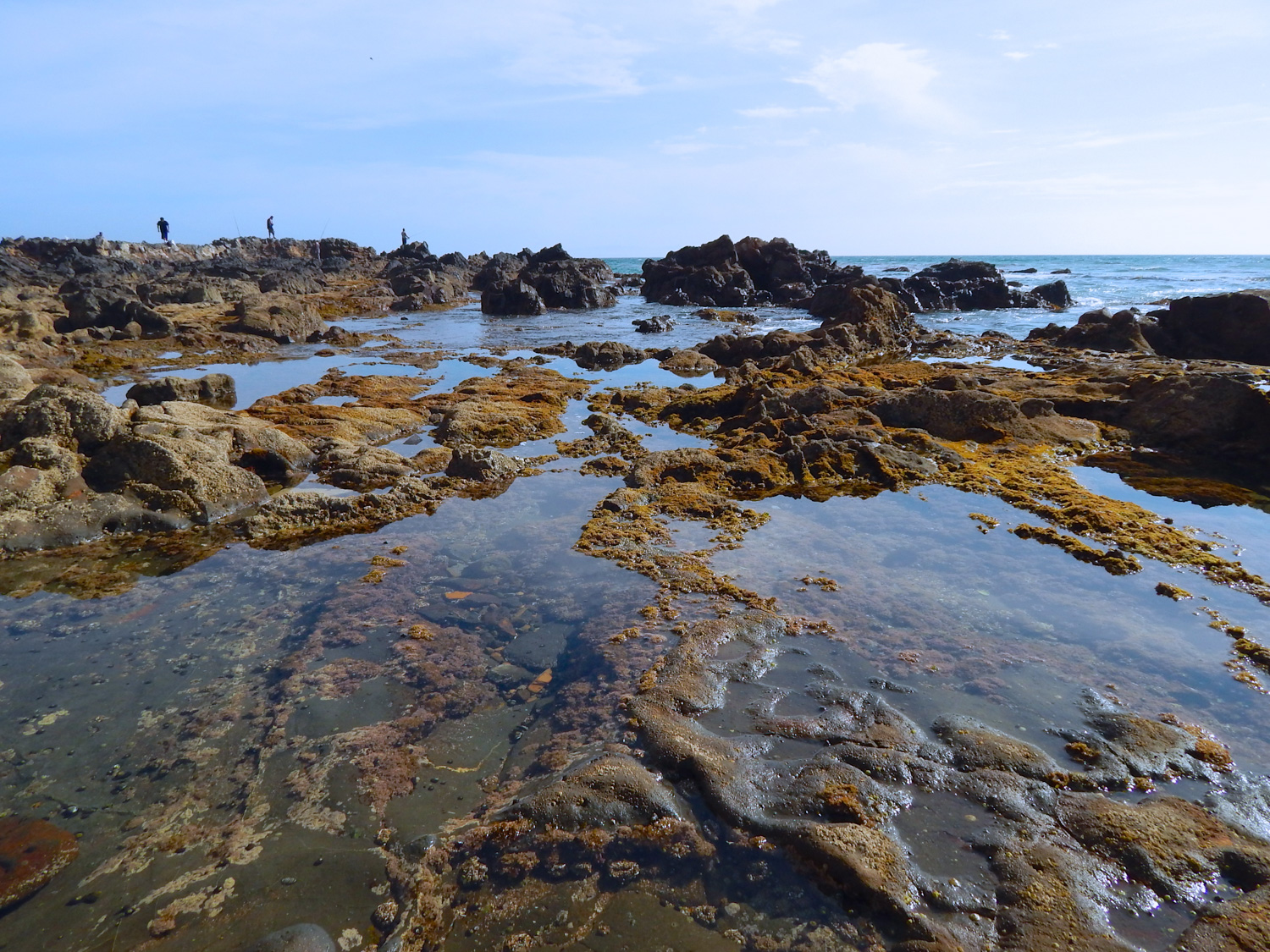 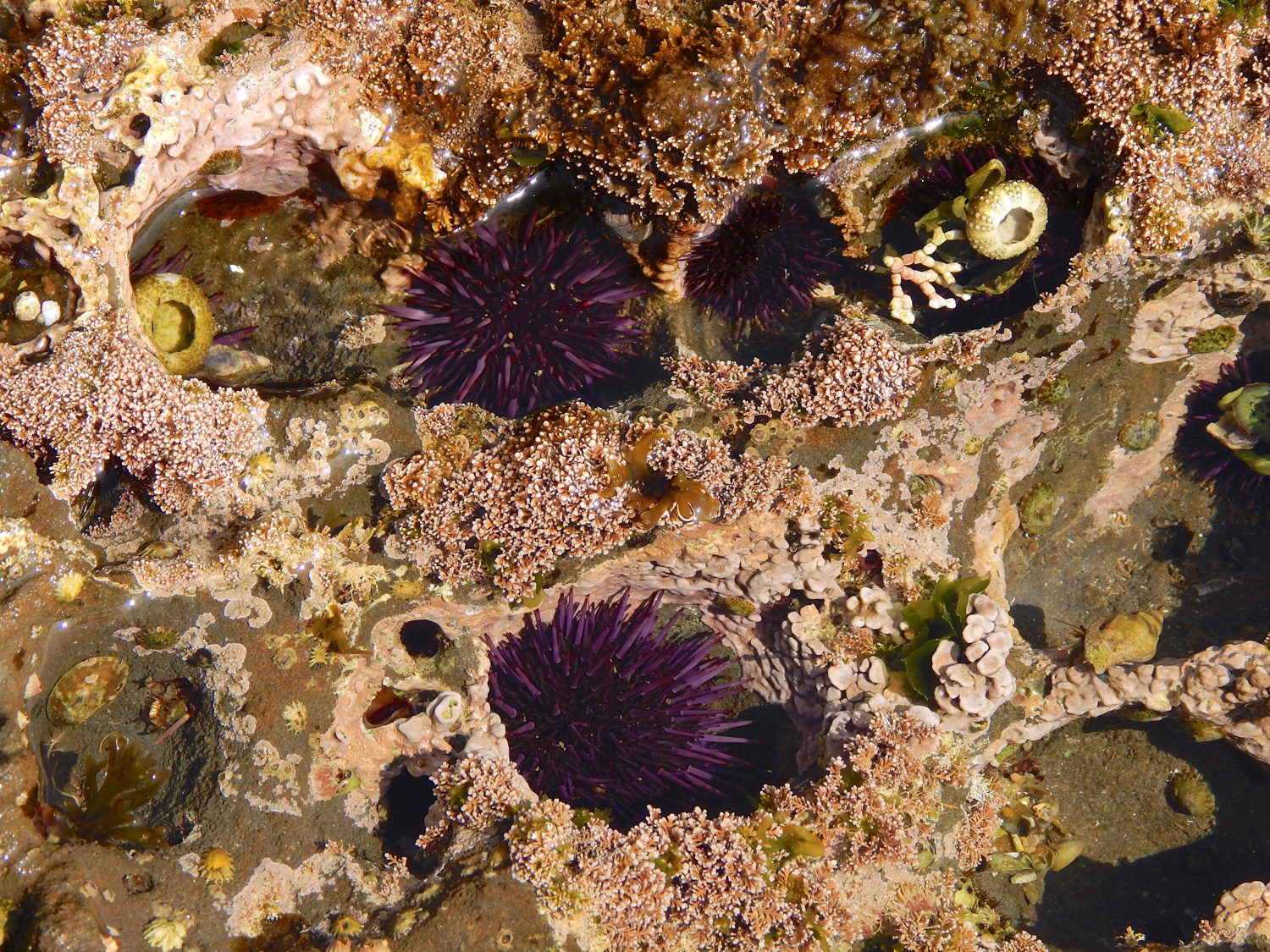 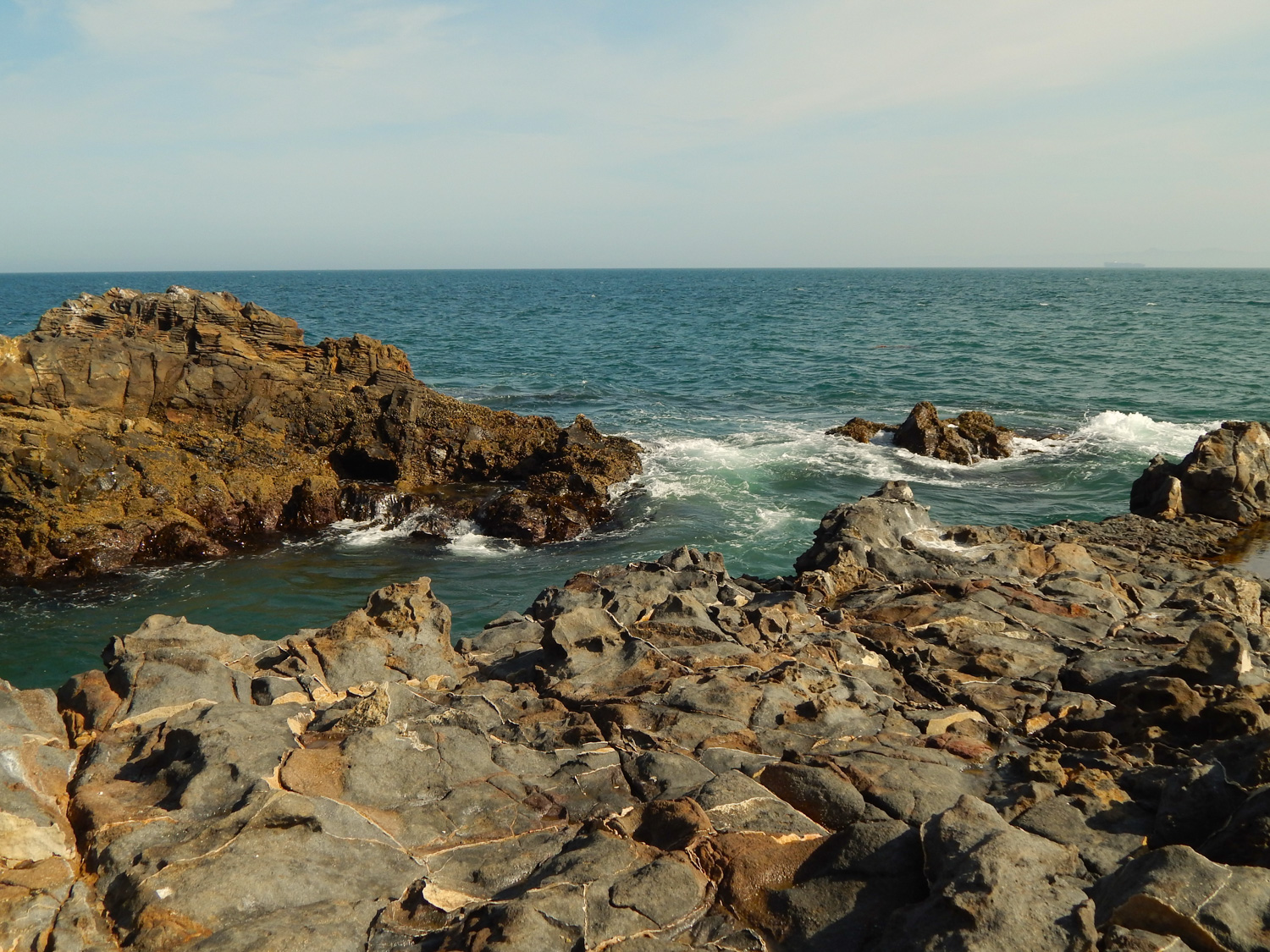 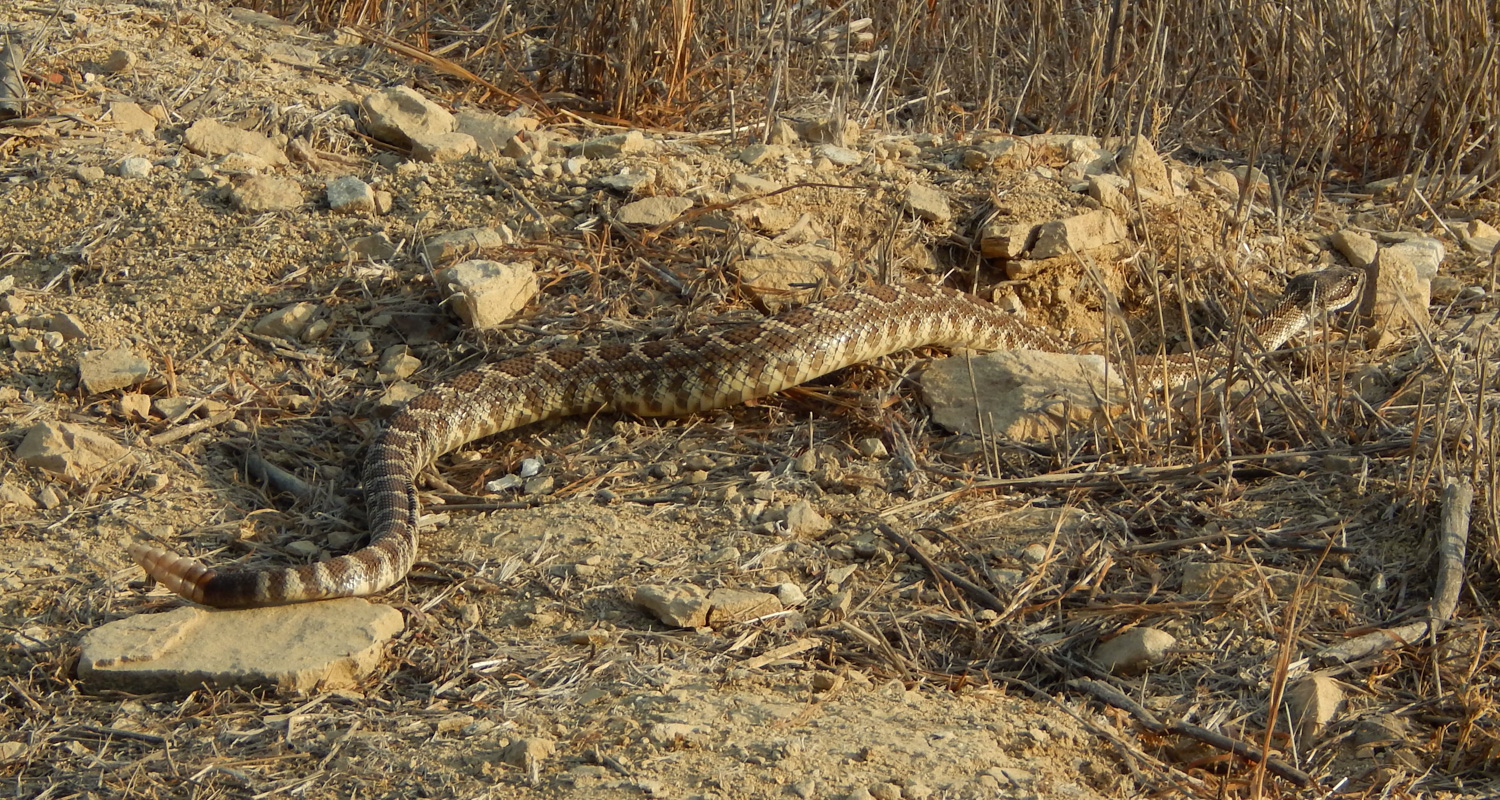 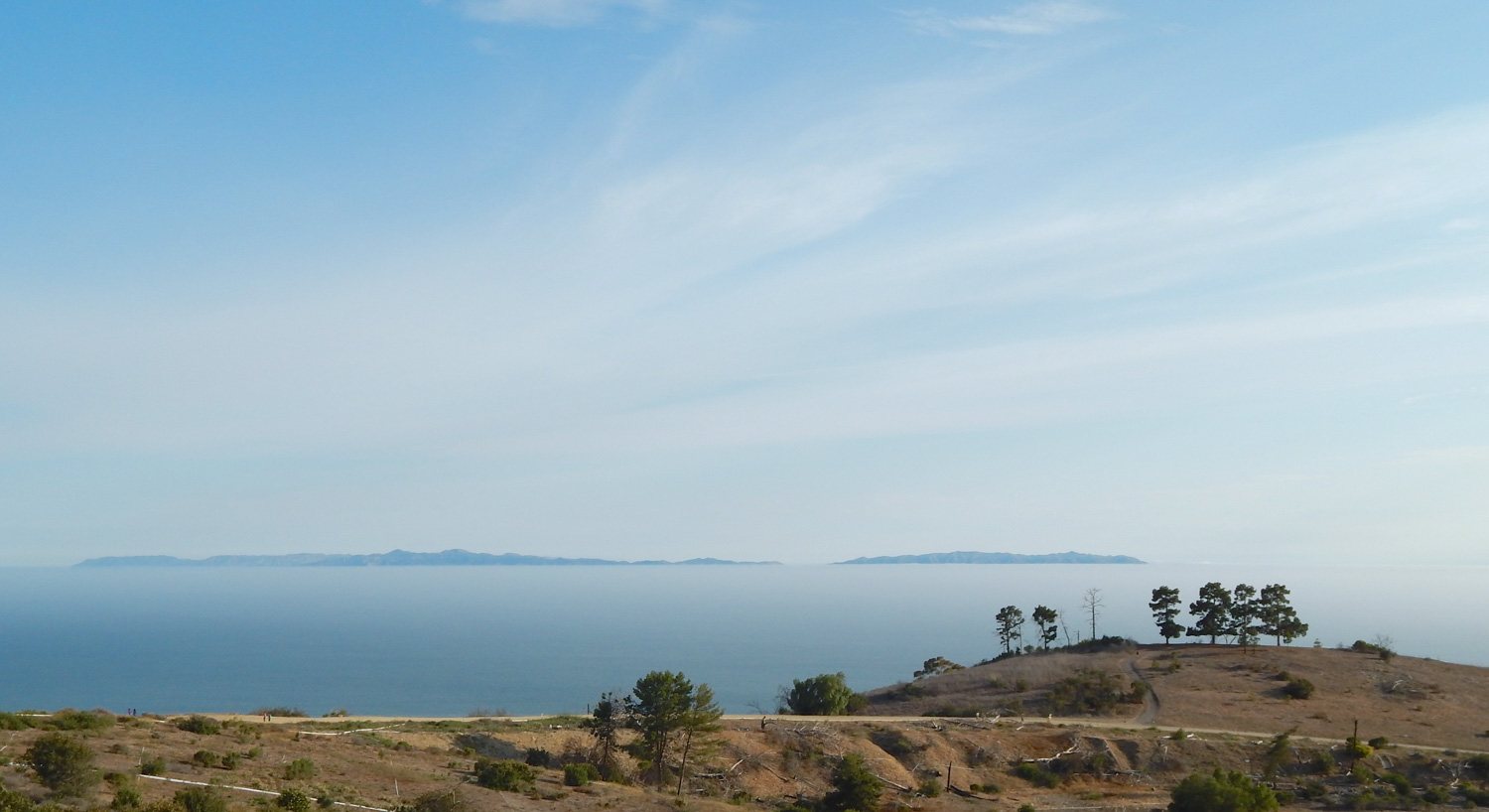 Good – the trail is well-signed and well maintained despite the constantly shifting landscape, although it can get pretty dusty. If going all the way to Sacred Cove, check tide tables and aim to be there during low tide.

Trailhead is located on the Palos Verdes peninsula at the termination of Crenshaw Blvd. The Reserve can also be accessed via Palos Verdes Dr South, about a third of a mile east of the entrance to the South Bay Archery Club and one mile west of the Trump National Golf Club. Note that new parking restrictions imposed by the local government have made it much more difficult to find parking near the trailhead. Signage is unclear and inconsistent, but citations are not. Transit accessible with a walk