This short, easy hike leads to one of the more otherworldly natural features in the State of California, the tufa of Mono Lake. Tufa are unusual limestone formations produced by the interaction of subterranean spring water and Mono Lake’s high concentration of dissolved inorganic carbon. Over thousands of years, carbon accumulations formed the bizarre pillars that cluster just west of Navy Beach, forming previously submerged towers and pinnacles. As Mono Lake’s level dropped following decades of Los Angeles diverting water from the Rush Creek, Lee Vining Creek, and Mill Creek drainages, the tufa became exposed. This short trail wanders among the tufa while periodic interpretive panels give you a primer on the geology, hydrology, human history, and natural history associated with the area. 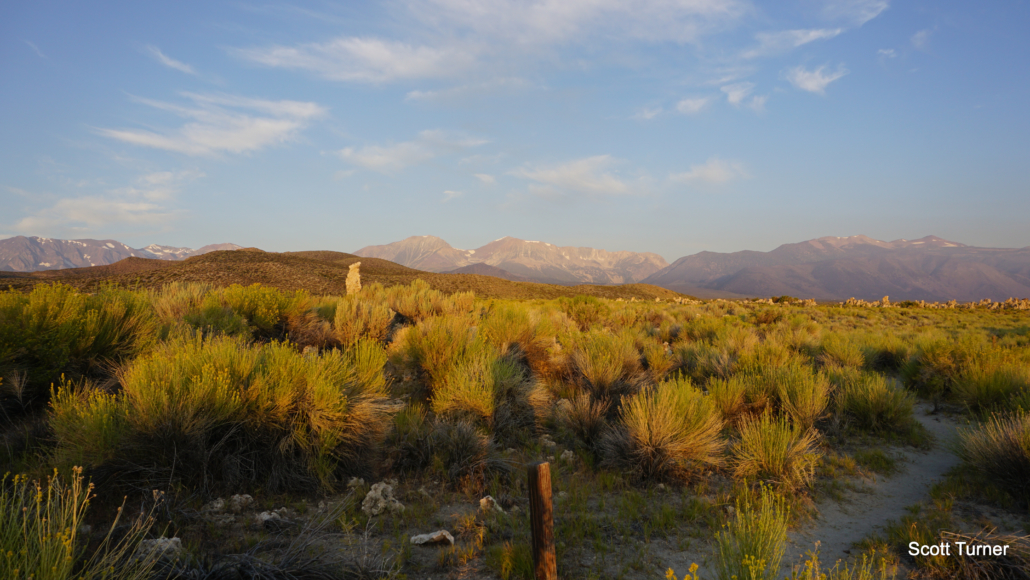 Mono Lake is a Federal Fee area, which means that you’ll have to pay a fee to park at the trailhead. The fee is $3 for adults, and there’s a kiosk that collects the fees on most days. An America the Beautiful pass will cover your fee, if you’ve got one. It’s a good investment if you’re a frequent park visitor. 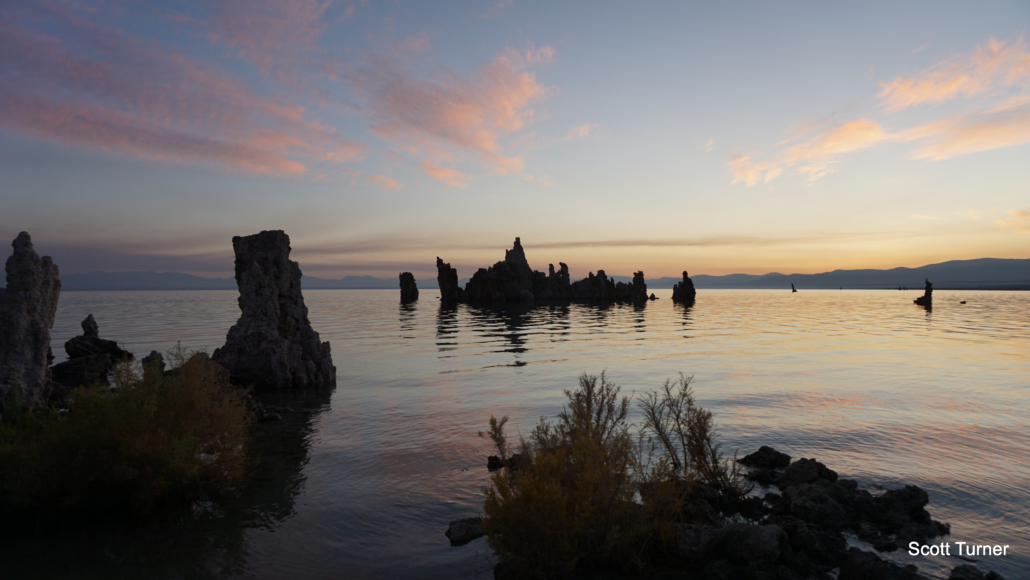 Mono Lake occupies what geologists call an endorheic basin, a term that refers to any basin that does not drain to the ocean. Because Mono Lake has no outlet and only collects water, large quantities of salt accumulate, creating very high levels of salinity and alkalinity. One of the elements associated with this alkalinity is dissolved calcium carbonate, a primary component of limestone. Beneath the South Tufa area, numerous small springs release fresh water to mix with the lake’s salty, alkaline water, and the lake’s calcium accumulates around the opening of the spring. Over time, towers of calcium minerals form, creating the tufa. 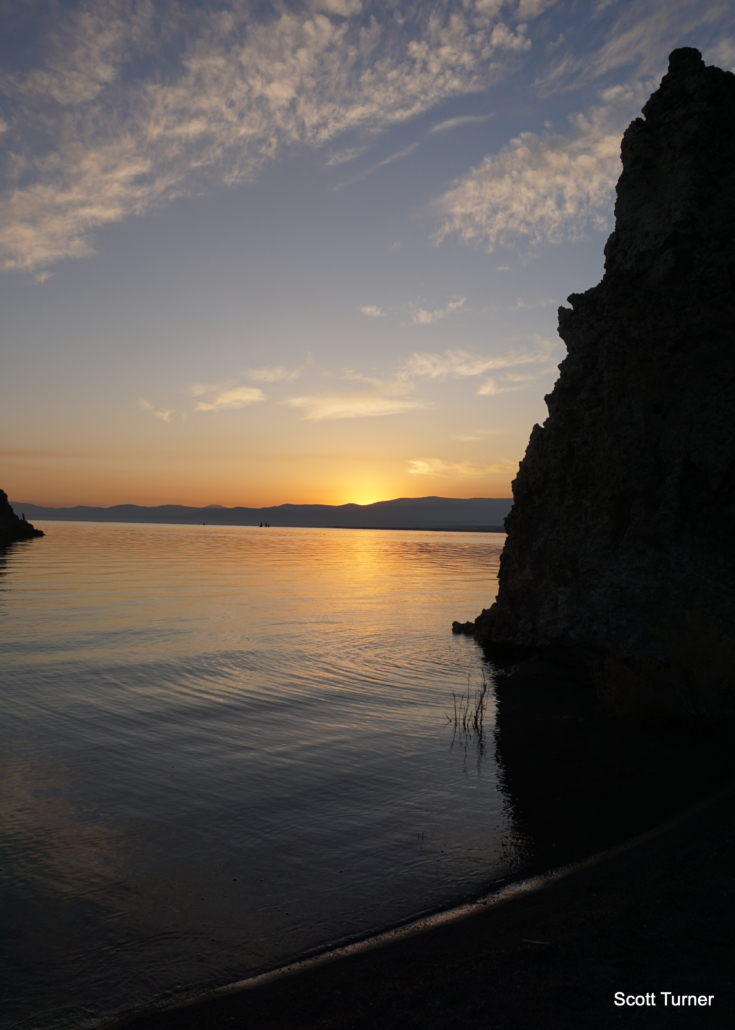 In 1941, L.A.’s Department of Water and Power extended its aqueduct system north from Owens Lake (which the city had already drained) to the Mono Basin to capitalize off of the heavy run-off produced from snowmelt on the Sierra Crest along the boundary of Yosemite National Park. At the time, Mono Lake’s surface level stood at an elevation of 6,417 feet. Over the next 40 years, water diversion caused the lake level to drop until the lake surface reached its low point 0f 6,372 feet – 45 feet before its 1941 levels. As the lake level dropped, a land bridge developed between the lake’s shore and Negit Island, where thousands of migratory birds nested. The land bridge enabled predators to attack and kill huge portions of the lake’s bird population, creating an ecological crisis.

The Mono Lake Committee had formed a few years prior, and the Committee joined forces with the Audobon Society to take legal action against the L.A. D.W.P.. After a decade of litigation, the California State Water Resources Board ordered protection for Mono Lake and its tributary streams in an effort to allow run-off from the Sierra to replenish the lake. The board set a goal for a new lake level of 6,392 feet, although ongoing drought, heat, and evaporation currently hinder the effort to reach that target. As of August 2019 following a heavy snowpack year in the Sierra, the lake’s surface level stood at 6,383 feet – 9 feet below the target level.

The drop in the lake’s surface level exposed the tufas at various places on the lake’s shore, with the tufas on the south being the most beautiful and noteworthy. The short trail exploring the tufa wouldn’t be possible without the lake level drop, and it’s possible that some of it may be submerged depending on fluctuations in the lake level. However, the current level supports a full exploration on this short loop, providing intimate access to these fascinating geologic structures. 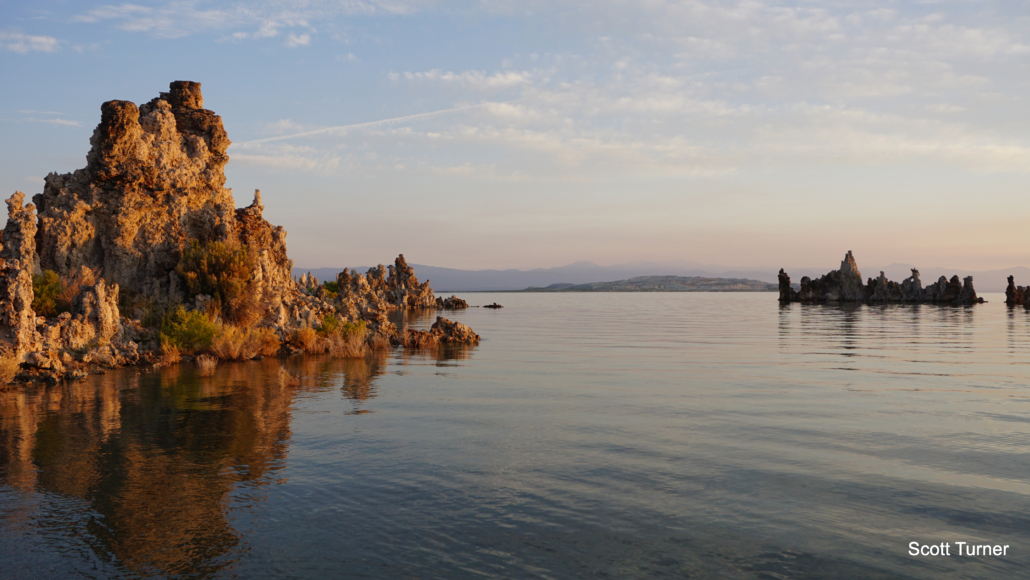 Although Mono Lake is far more saline than the ocean, and it therefore can’t support the same sort of life as other massive bodies of water, the lake still supports a surprisingly rich ecology based off of three small, but abundant life forms. Single-celled algae forms the basis for the entire food chain, and it begins to reproduce at massive rates in winter and spring when runoff begins adding new nutrients to the lake. The lake’s endemic species of brine shrimp, the Mono Lake brine shrimp, provides a food source for a number of migratory birds, including California gulls (yes, the ones that also hang out at the beach), plovers, avocets, phalaropes, and grebes nest at various sites on the lake’s shores and islands. Also noteworthy are the alkali flies, which thrive in shallow waters on the lake shore and provide a source of food for the resident birdlife, much as they once provided an important source of food for the indigenous people who once inhabited the Mono Basin.

Speaking of those fly-eating humans, a band of Northern Paiute called the Kutzadika’a once inhabited the shores and watercourses surrounding Mono Lake. Legend has it that the name Kutzadika’a means “fly eaters,” a name which reflected the tribes tradition of relying on alkali fly larvae for sustenance. The people of Mono Basin traded with tribes on both sides of the Sierra, and they made (and still do make) an annual pilgrimage from Mono Lake, through Bloody Canyon, over Mono Pass, and beyond to the Tuolumne Meadows area in Yosemite National Park. The Kutzadika’a, like neighboring Paiute tribes, were displaced onto reservations located near Bishop. 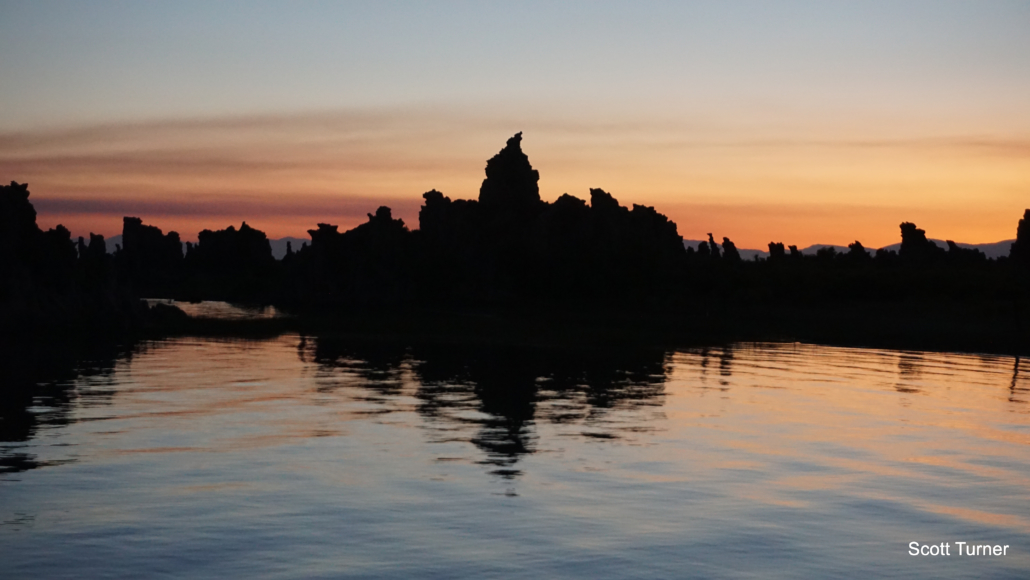 The short hike the tufa is easy enough for anybody to follow. Simply step onto the trail, and veer left to follow the boardwalk north to the heaviest concentrations of tufa on the lake’s shore. Along the way, numerous interpretive panels will educate you on the various features of the lake, as well as some of the high desert flora hugging the shoreline. After 0.3 mile, the boardwalk ends, transitioning into soft sand as you past some of the first tufa formations. At 0.4 mile, the trail reaches the lake shore and bends to the east to begin looping back. Right around this point, look for a spur trail that leads north into the densest tufa outcrops. From here, you can also enjoy a great view across the lake as well as west, where Mount Dana, Mount Gibbs, Tioga Peak, and Mount Lewis crown the serrated Sierra Crest. 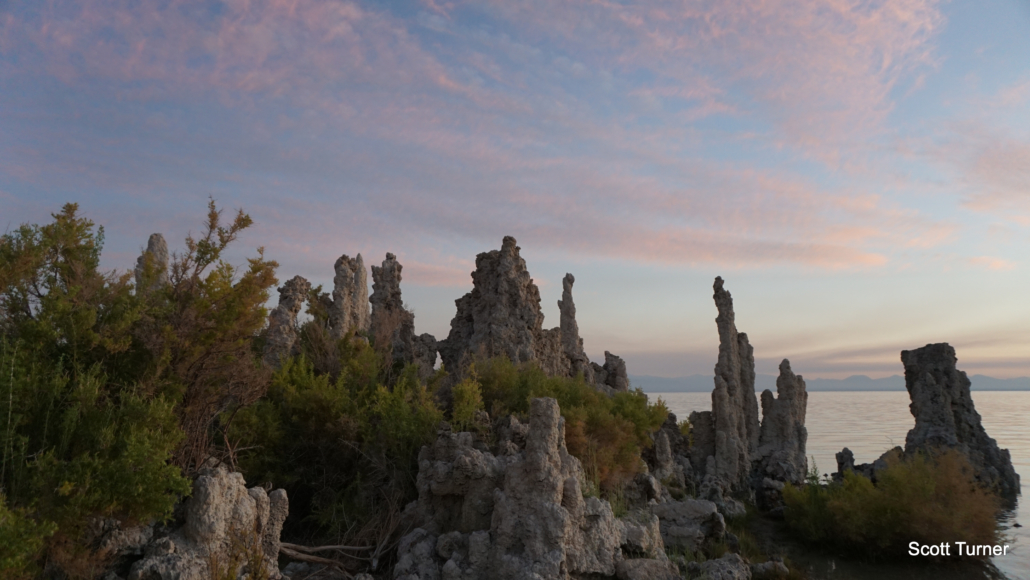 After returning to the main route, the trail loops back south to return to the car. Several picturesque tufas along several stretches of beach invite exploration and photography – the formations are particularly photogenic. If you can time your visit, arrive at this area 20-30 minutes before sunrise to enjoy the stellar light and colors produced by the rising sun. The tufa’s form evocative silhouettes, and the lake’s calm waters reflect a rich palette of colors. 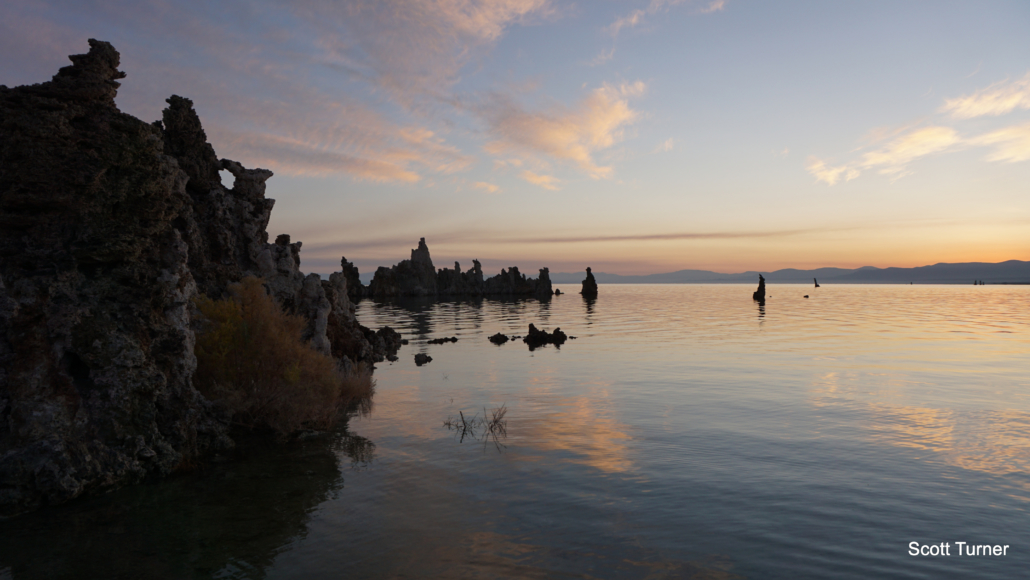 The return journey leads through the brush and a few tufa formations back to the parking area. If you want to extend your trip, you can turn left onto an informal trail at 0.6 mile, which will lead you east toward Navy Beach. The beach is a popular spot for kayaking and swimming, and you can get a nice long distance look at the tufas from this spot as well. 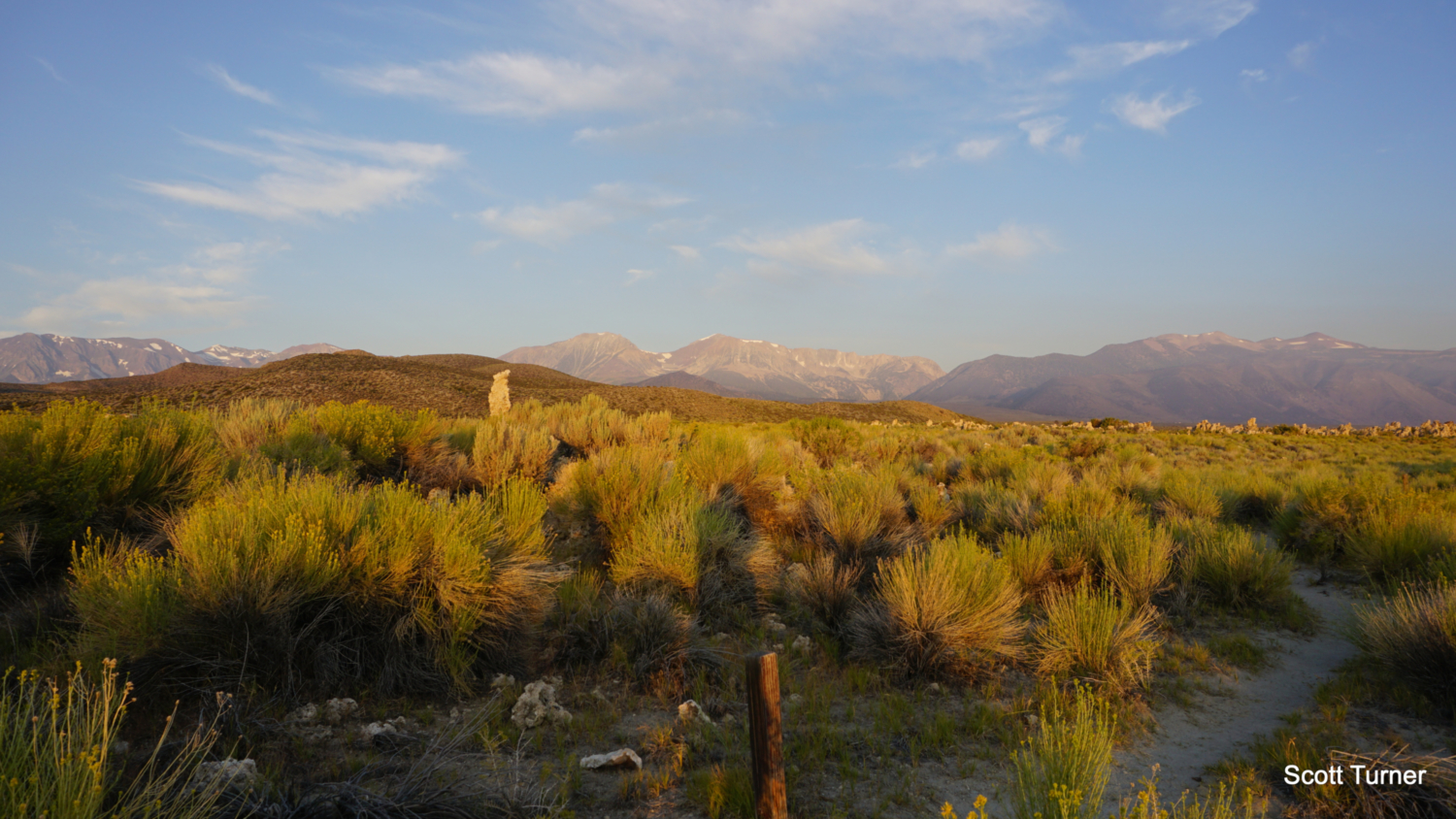 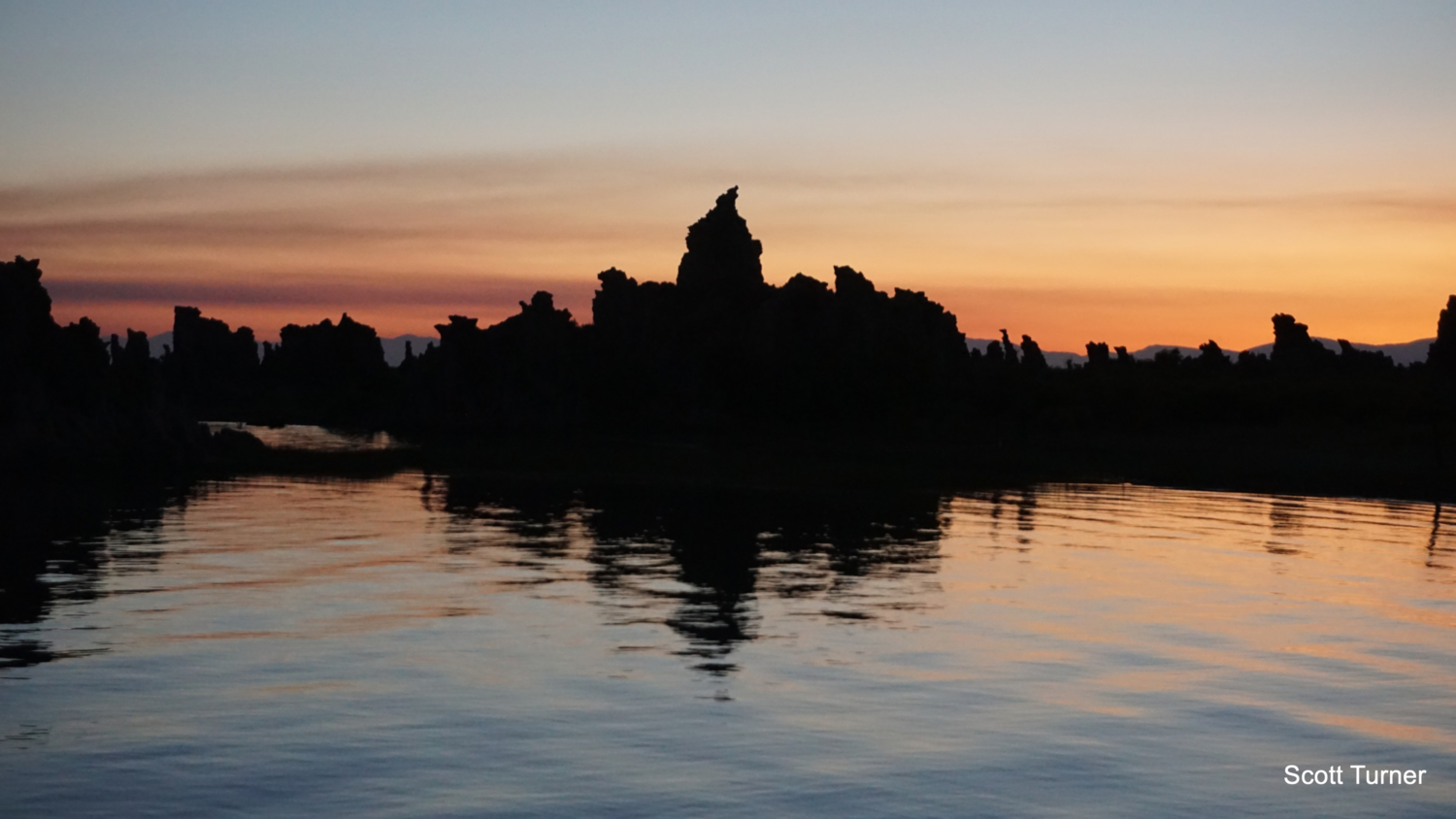 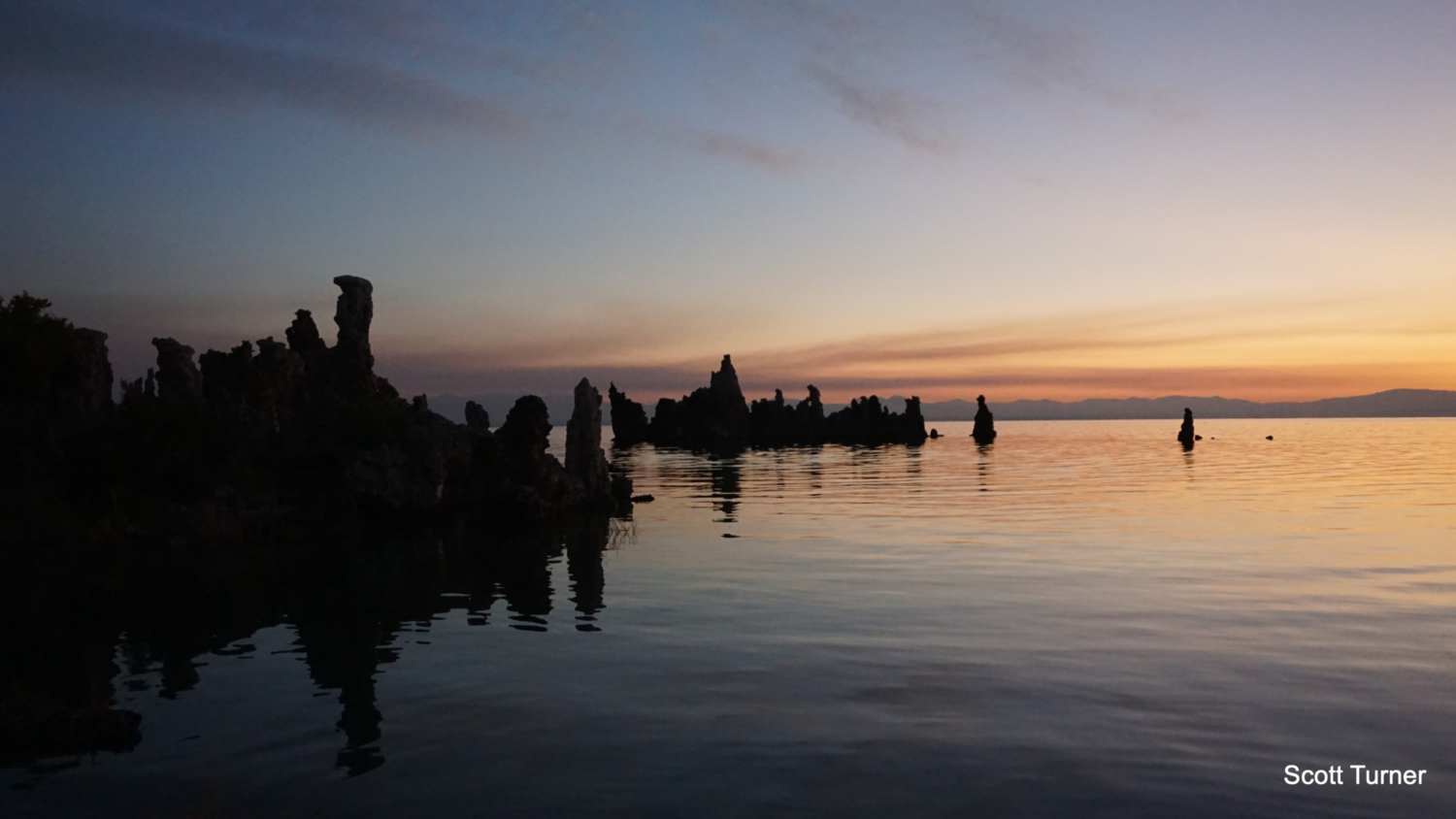 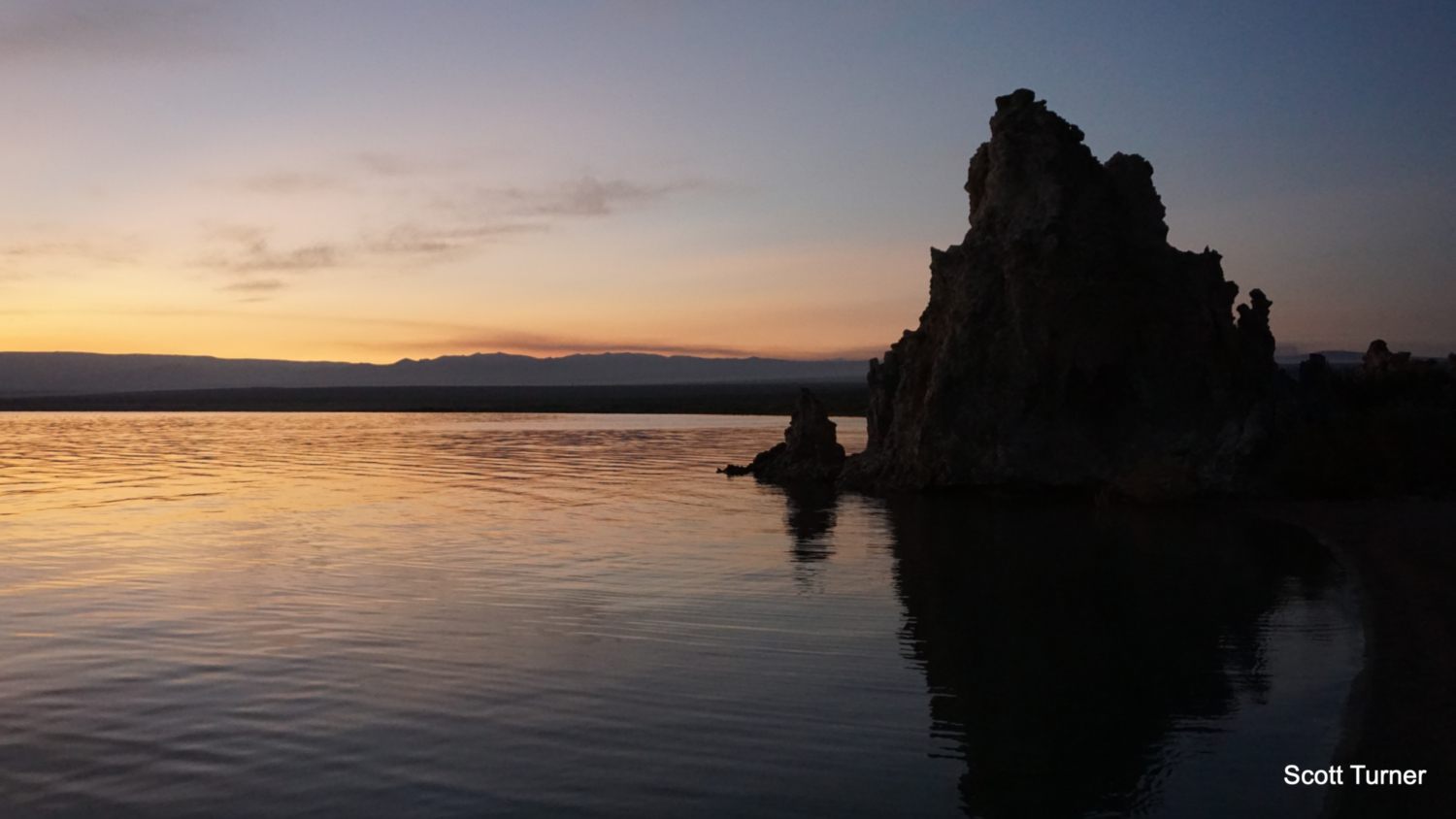 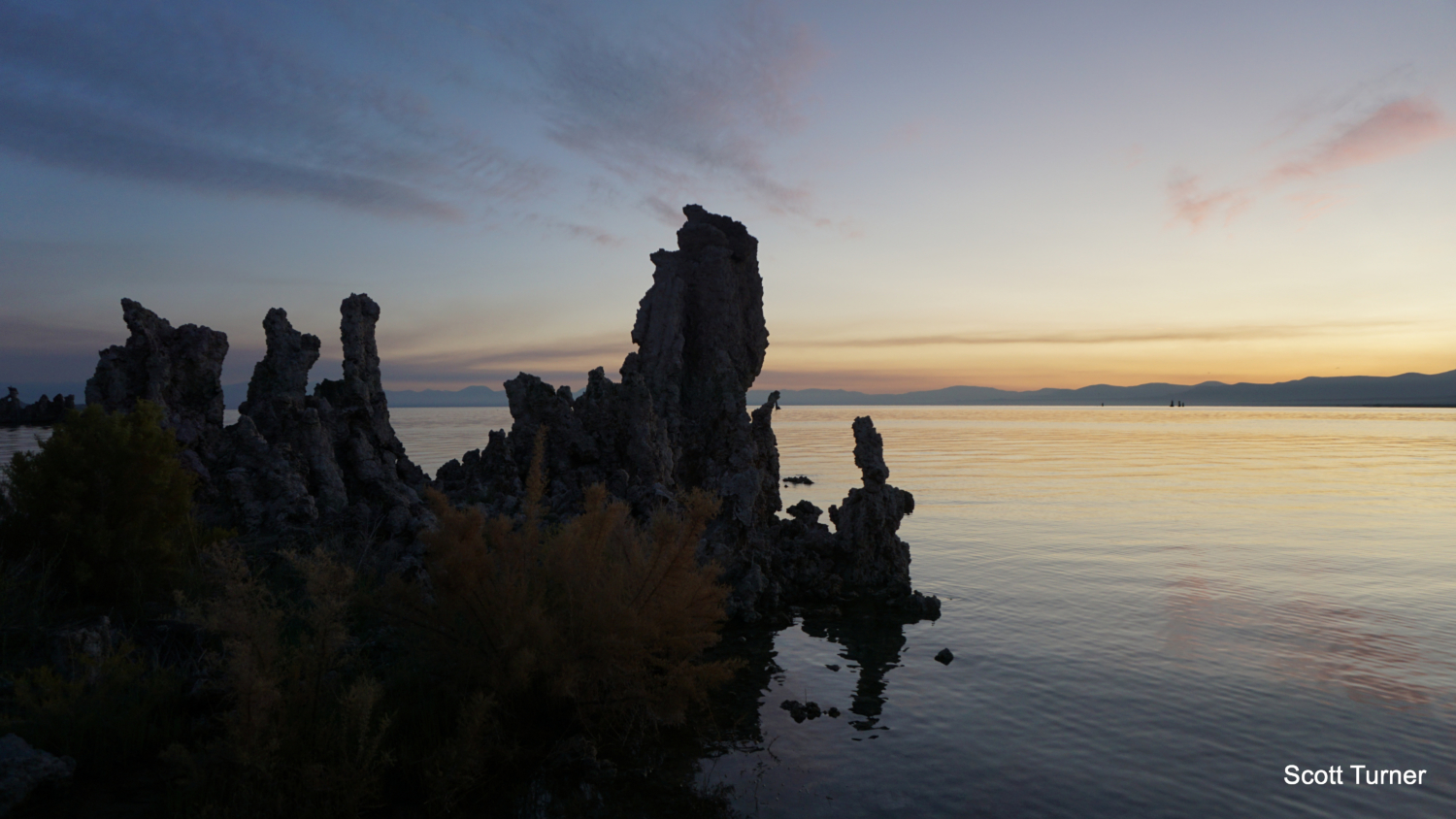 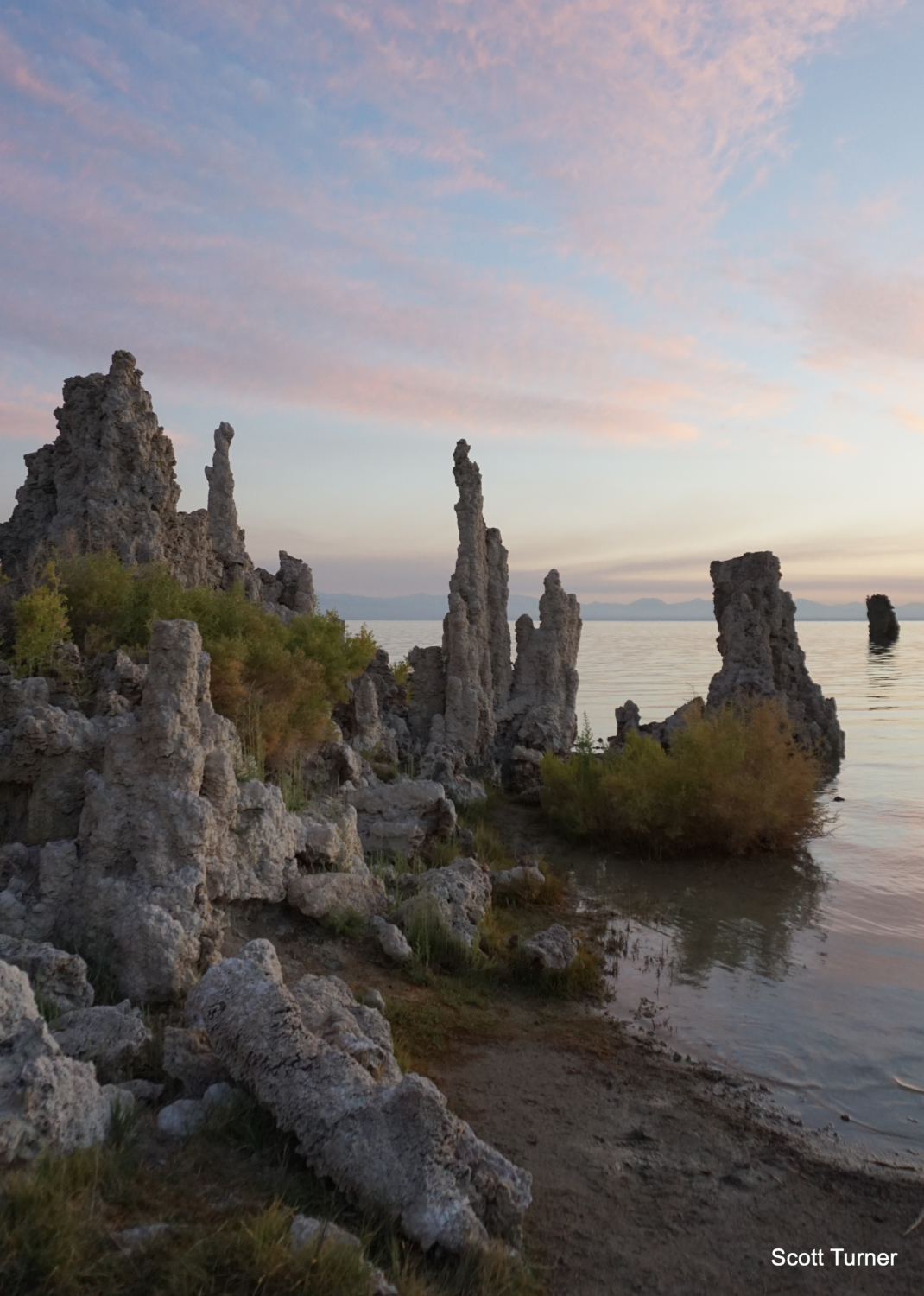 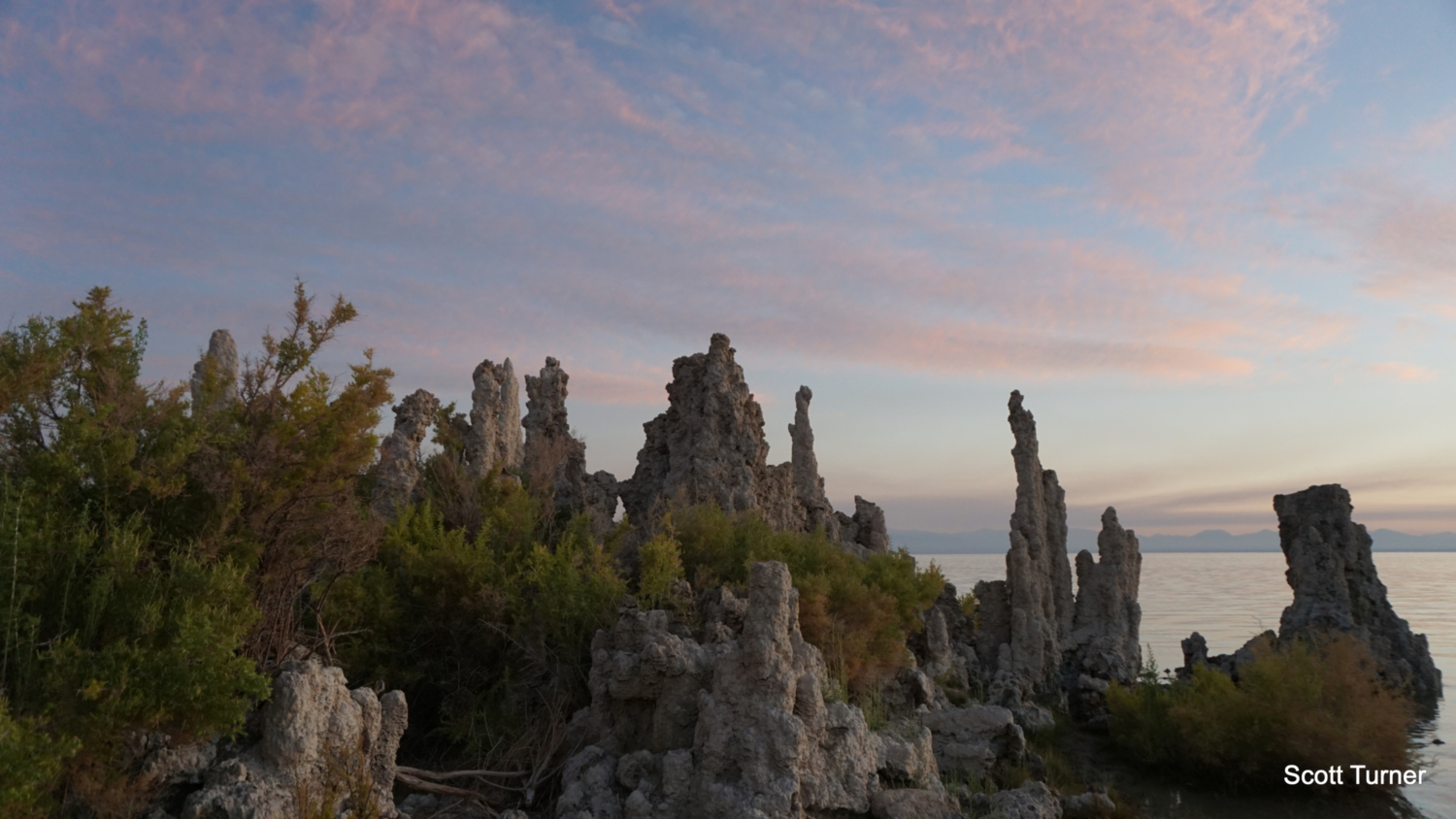 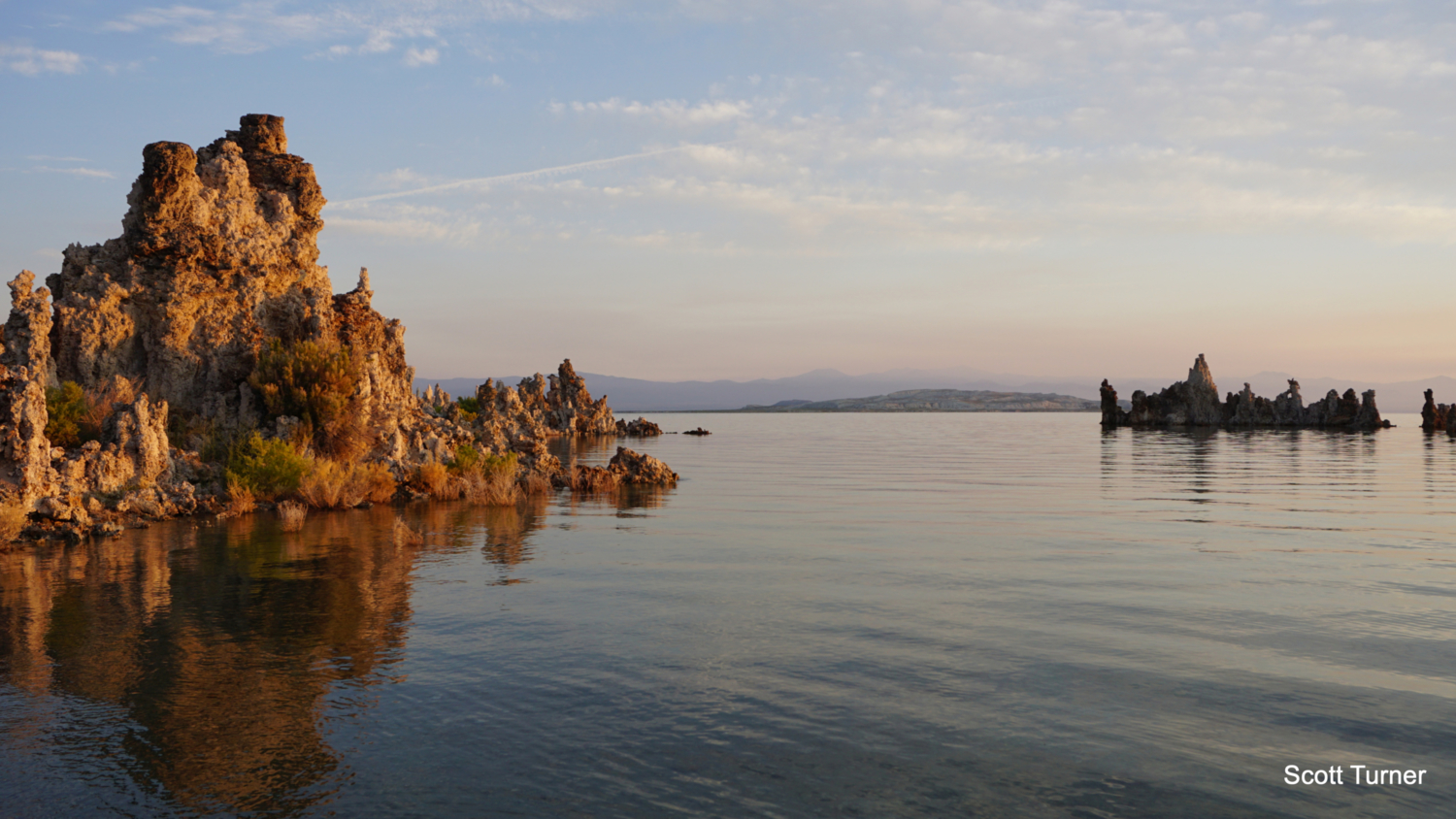 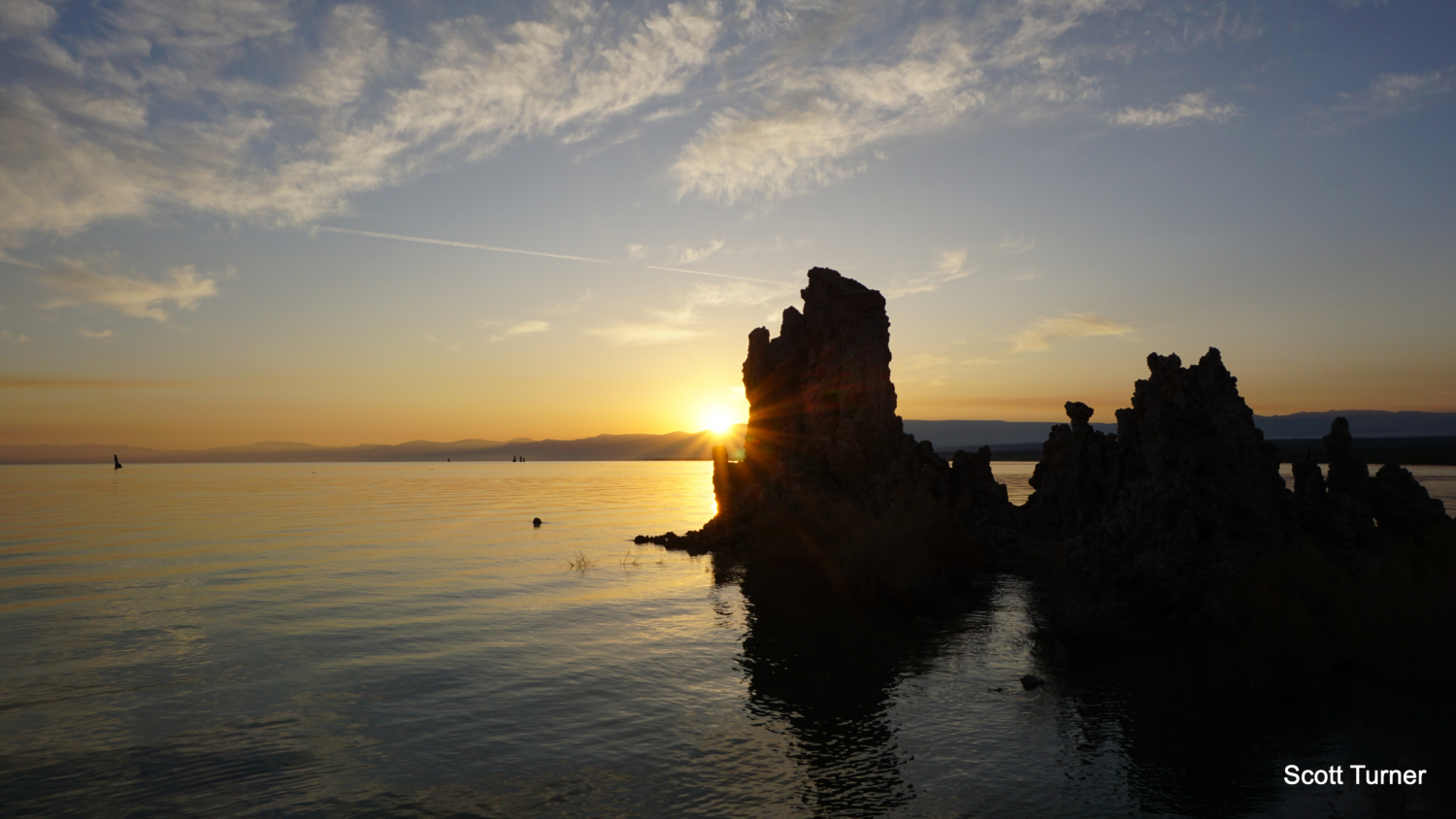 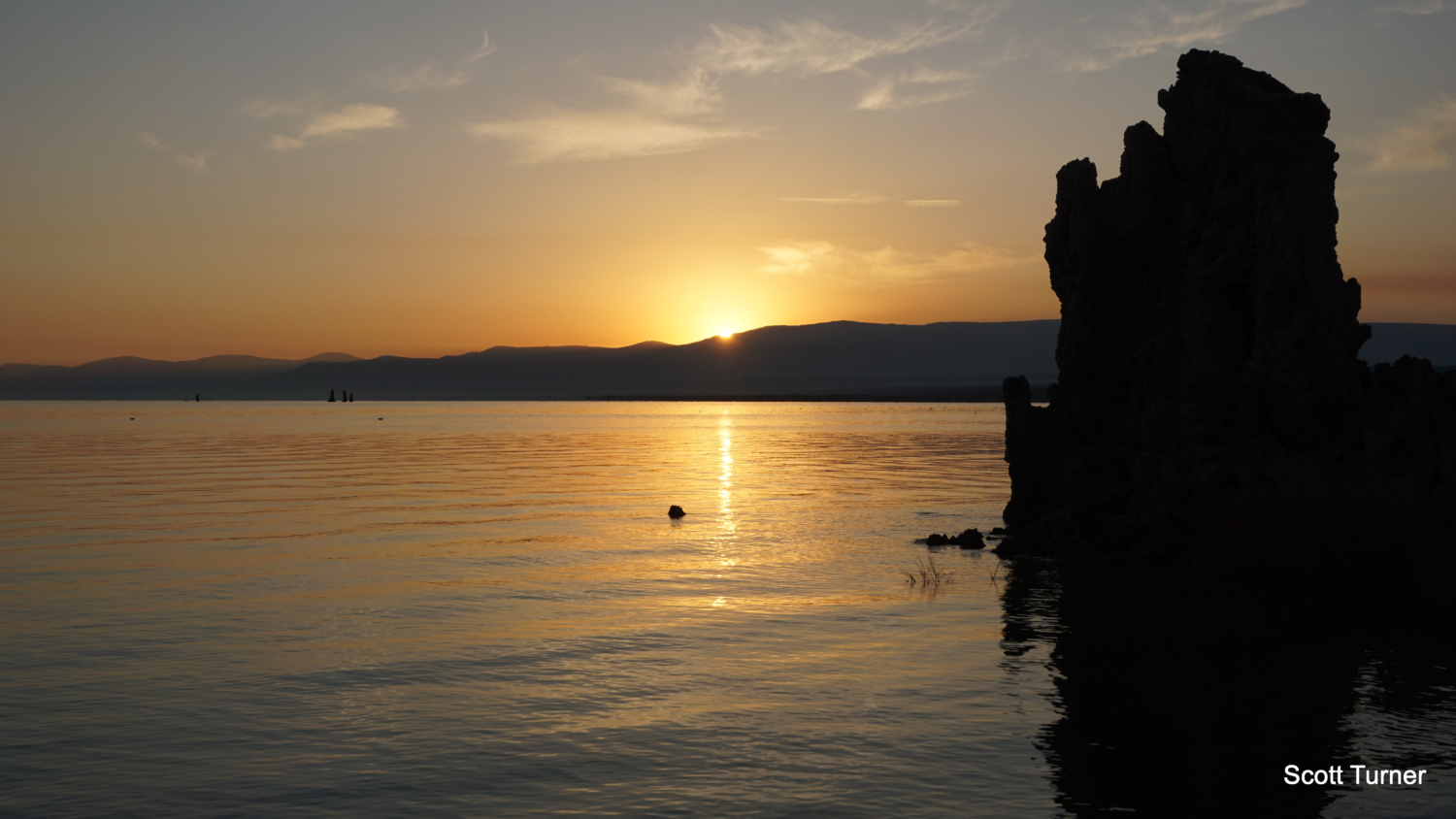 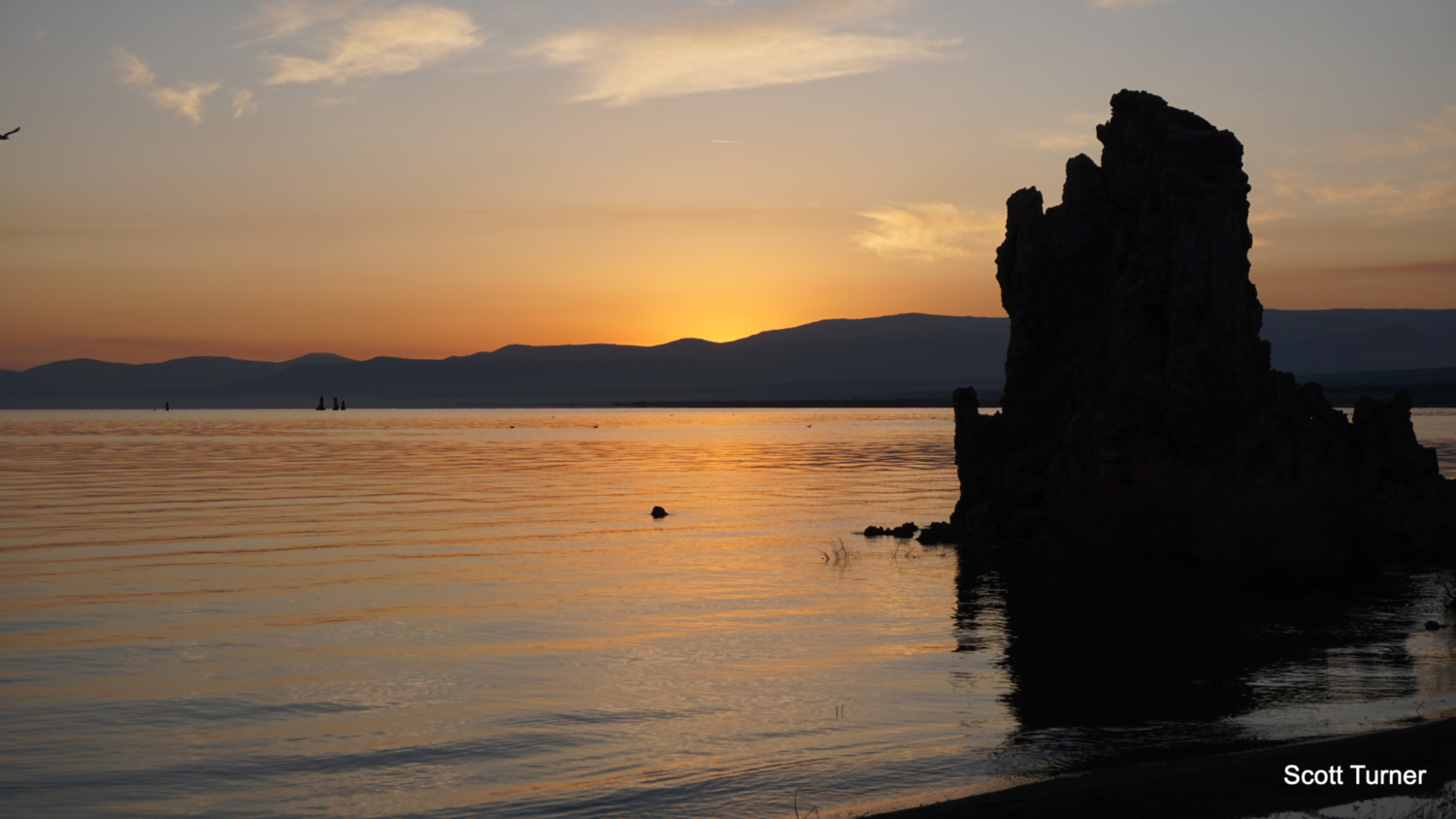 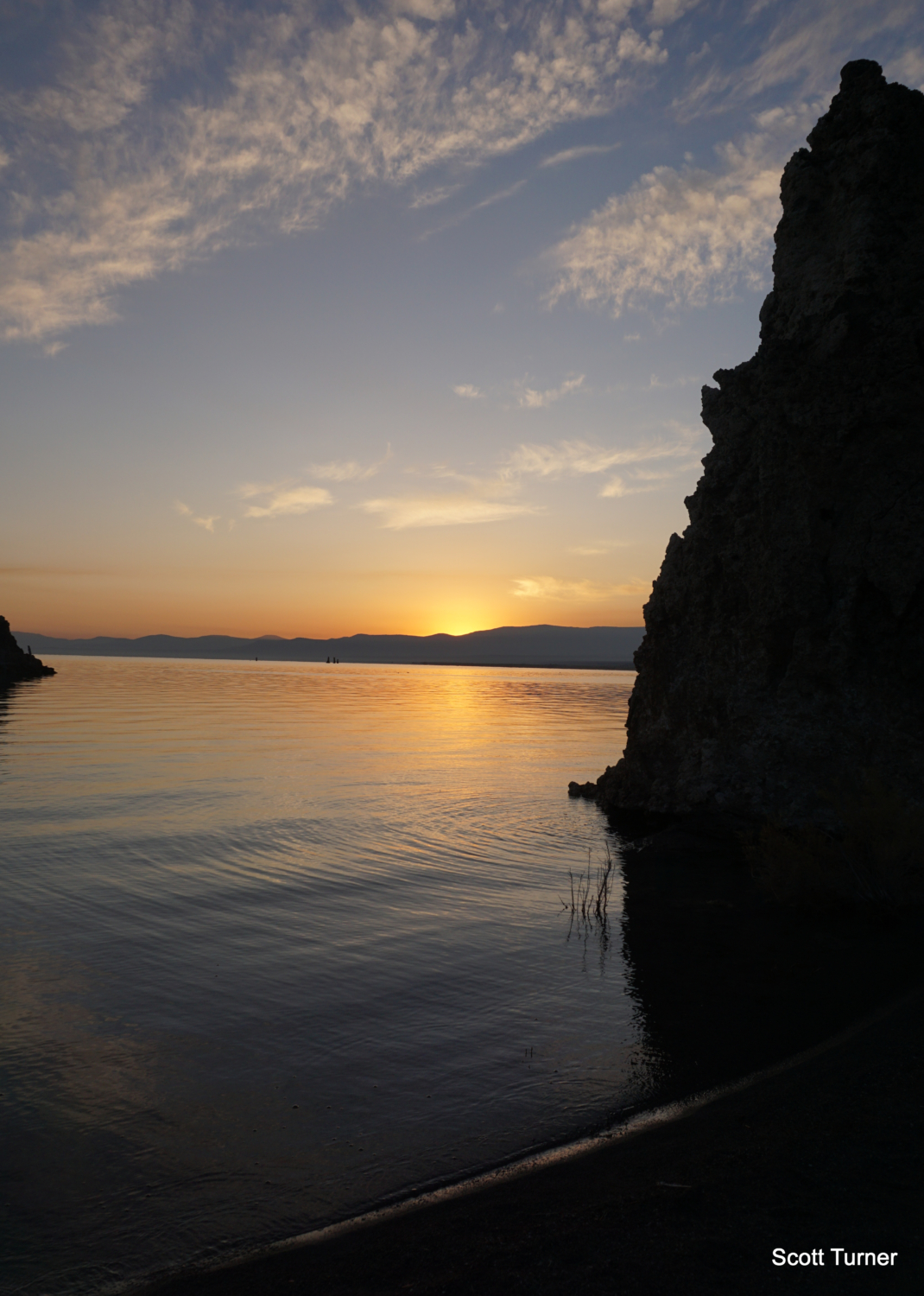 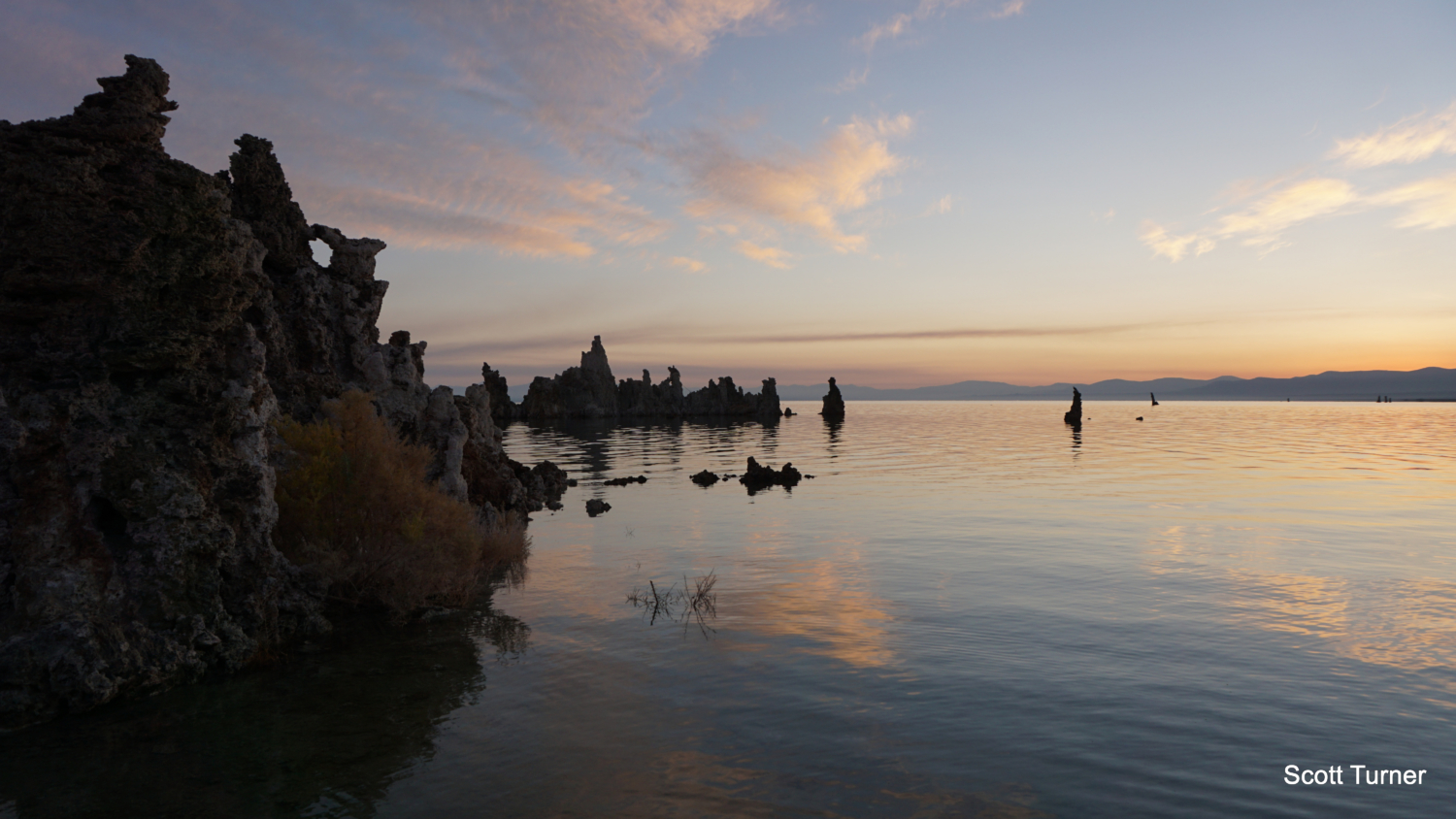 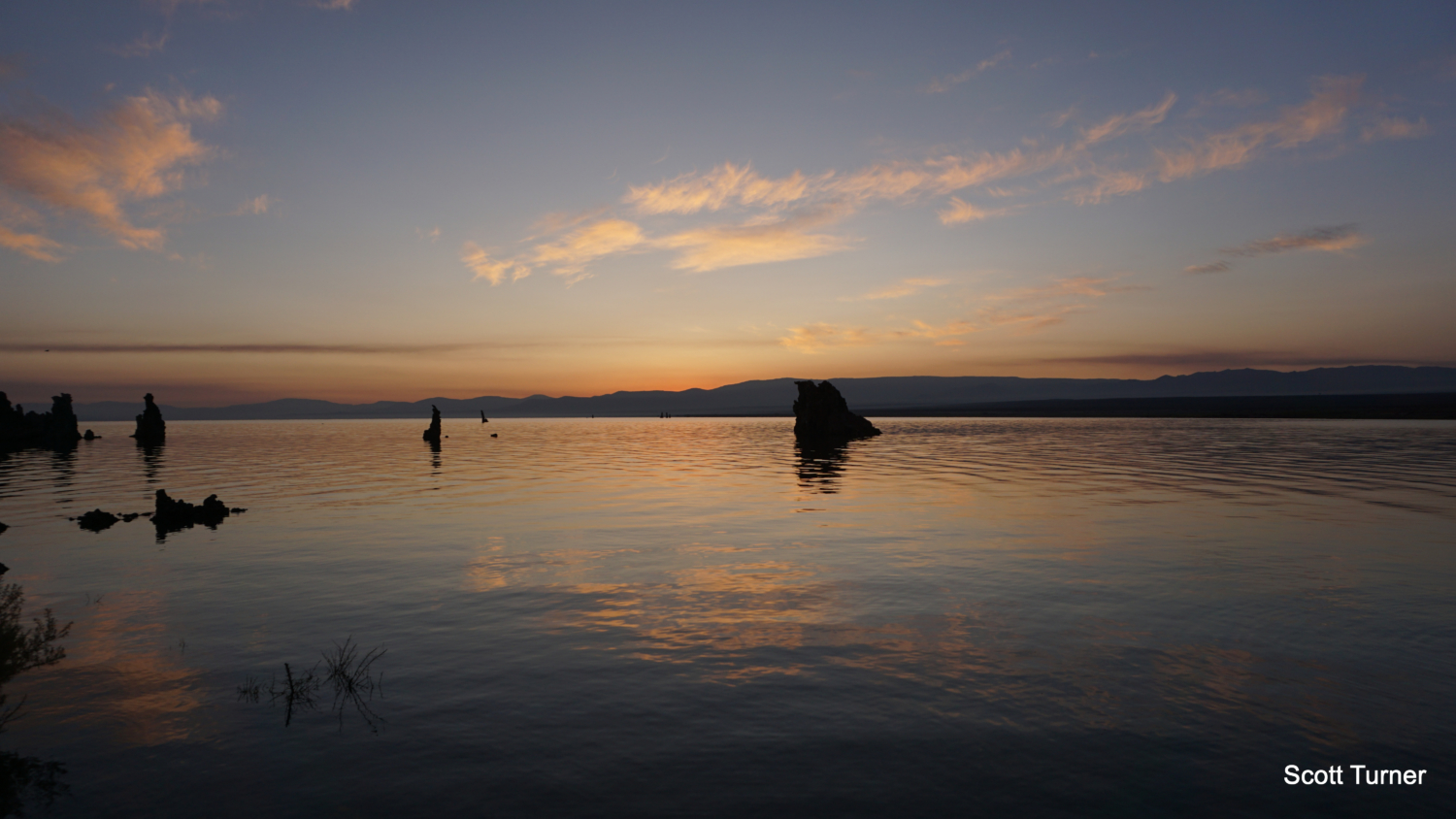 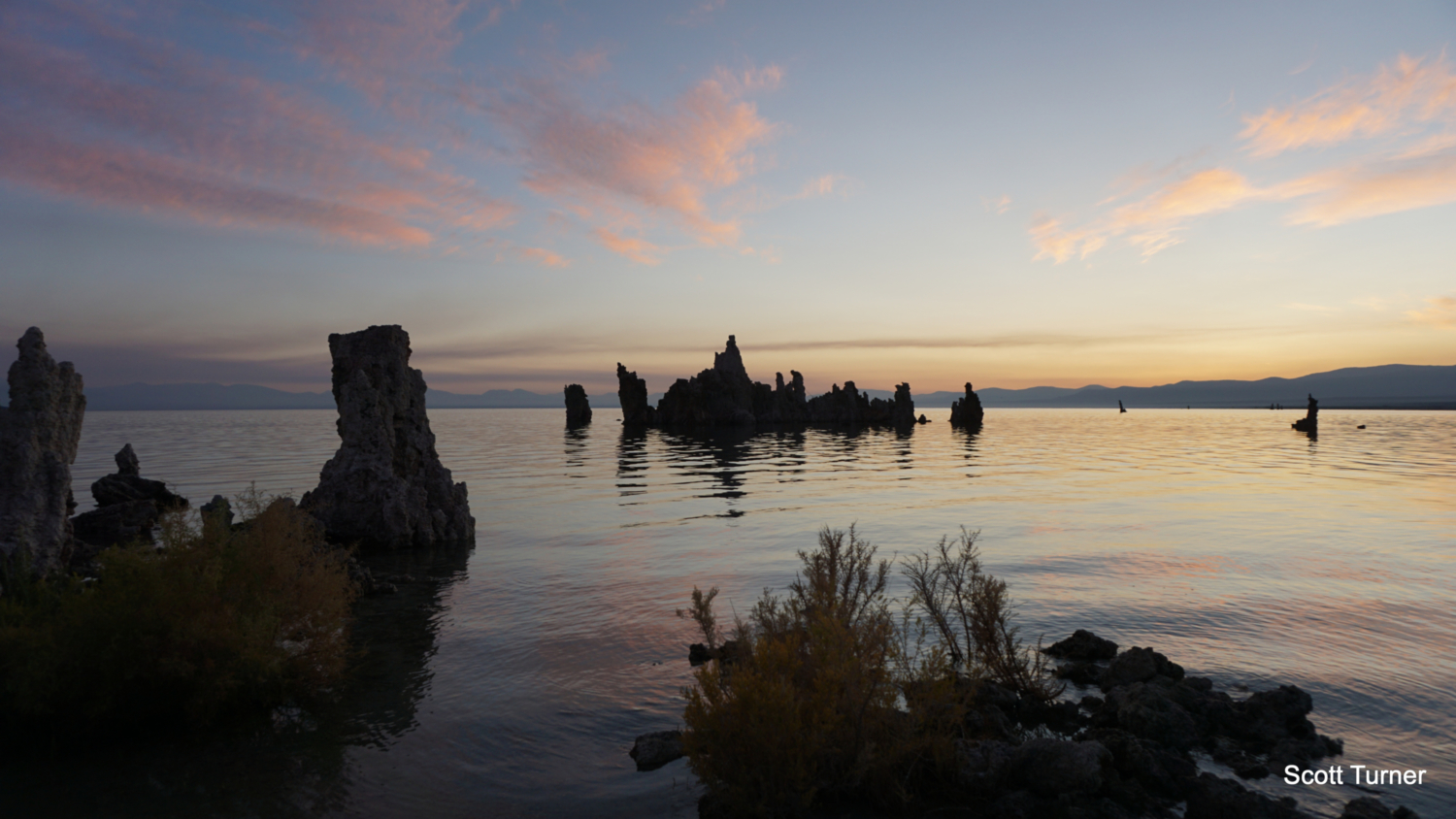 The trail is easy to follow, with a short section of boardwalk conveying hikers over more sensitive habitat near the beginning of the hike.

The nearest camping areas are at Lee Vining Canyon and June Lake. Of those campgrounds, June Lake Campground is reserveable and open from summer to mid-fall.

Starting from the junction of CA-120/Tioga Road and US-395 south of Lee Vining, drive south on US-395 for 4.7 miles, and turn left onto the westbound branch of CA-120. Continue for another 4.7 miles, and turn left onto Test Station Road. This unpaved, but easily traveled road continues for 0.9 mile to the parking area for the South Tufa Trail. If you're heading north, drive 5.6 miles from the junction of CA-158 (June Lakes Loop Road) and US-395 for 5.6 miles, and turn right onto CA-120 W.