The Piedras Pintadas and Bernardo Bay Trails combine together to form an oddly shaped but nevertheless enjoyable loop hike along the shores of Lake Hodges. Both trails have separate and distinctive characters, with Bernardo Bay featuring up-close views of the lake along with the large variety and volume of waterfowl, in addition to nice views of nearby Bernardo Mountain. Piedras Pintadas (Spanish for “Painted Rocks”) offers a good introduction to Kumeyaay culture as well as a small waterfall. Taken together, one can enjoy a nice combination of bird-watching, lake-side strolling, interpretive displays on local history and culture, and beautiful riparian habitat. 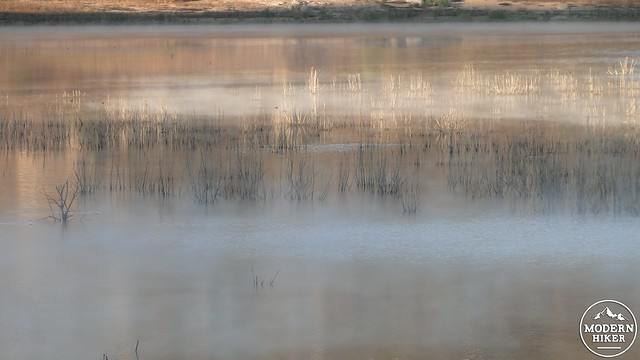 Steam coming off of Lake Hodges on a cool October morning

This region features numerous perennial streams within the San Dieguito River watershed. For hundreds of years before the arrival of European settlers, this area, with its abundant water sources, wildlife, and vegetable food sources provided a comfortable home to the Kumeyaay indians. Traces of their rich culture are evident all over the place, including the morteros used to grind acorns into flour, and the rock art painted by the Kumeyaay from which this area receives its name. The rock art is no longer accessible due to vandalism, but the interpretive signs make up for the absence somewhat by educating hikers on who the Kumeyaay were, what they did, and why they liked this area so much. 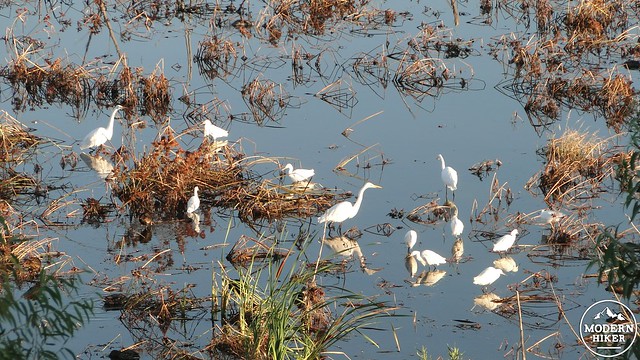 More recently, the Lake Hodges dam was built, thus altering the landscape dramatically and providing increased habitat for birdlife. Both the south and north trails along the shore have a reputation for great wildflower shows during wet springs, which is a result of the surprisingly rich biodiversity in what initially appears to be a typically dry and chaparral-ridden landscape.

This trail will start by taking the Bernardo Bay Trail in an easy loop along the shore of the lake before bending back inland near the eponymous bay. To reach the trail, you will have to leave the parking lot and walk along the bike trail that parallels the road, heading south. As the bike trail descends along the road, the bridge across the San Dieguito River/Lake Hodges will become visible. You won’t reach the bridge as you will take a left onto the Bernardo Bay Trail before the bike path gets to the bridge. 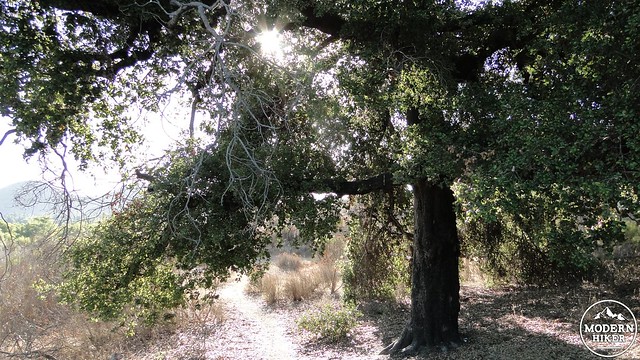 From here, the trail will dive down briefly through a rich variety of scrub and brush interspersed with oaks and willow trees as it follows the shore of Lake Hodges. At times, the portion of the lake closest to I-15 will be a relatively dry marsh, although this area can be fully flooded during wet years. Bernardo Mountain rises up in a roughly pyramidal shape on the opposite side of the lake, while the dull drone of I-15 gradually recedes as you round a bend to the left and gain open views of the eastern half of the lake. 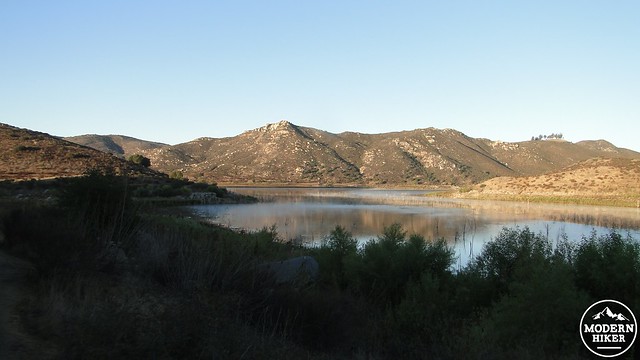 South side of Lake Hodges

The trail will hug the lake’s shore for the most part while occasionally drifting inland a bit to avoid sensitive areas along the shoreline. You will notice a few trails that lead off to the left up the low hill, but those should be avoided in favor of remaining close to the shore. Eventually though, the trail will begin to bend toward the left as it approaches the natural barrier of Bernardo Bay. 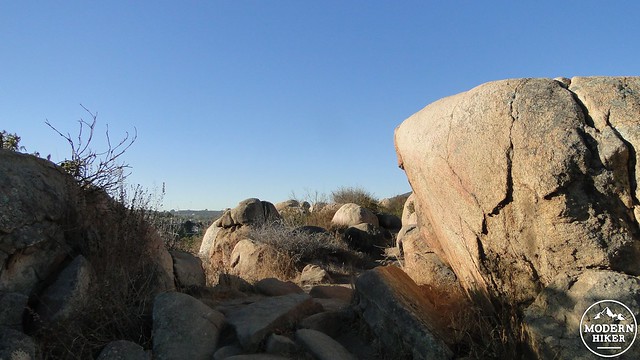 After bending away from the water, a use trail will lead off to the right and provide access to the dense riparian (almost marsh-like) area to the south. The only reason to head this way is to scope out some of the birds in the area. Ultimately, the use trail dead-ends. Not long afterward though, an official trail will branch off to the right, while the Bernardo Bay Trail bends to the left to return to the parking lot. Take the right turn, which will commence the Piedras Pintadas segment of the hike. 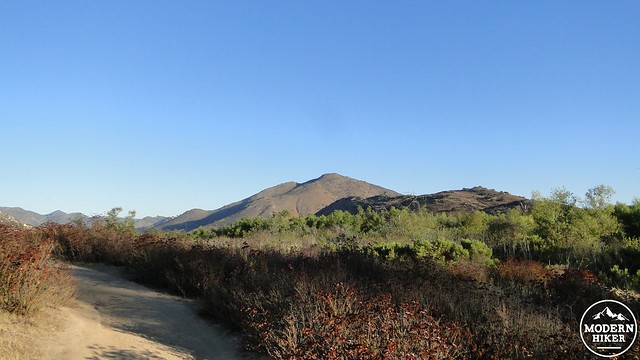 Looking back at Bernardo Mountain

This Piedras Pintadas Trail traverses the riparian area supported by an annual creek. You will see the occasional sign indicating flora types before crossing over the creek on a bridge. These creeks help to feed Lake Hodges, and they were originally a primary water source for the Kumeyaay. After crossing the creek, the trail will bend to the right and approach the subdividsions on the south end of the San Dieguito River Park. Before reaching them, the trail bends off to the right and plunges back into another thick riparian scene that’s supported by a second creek. 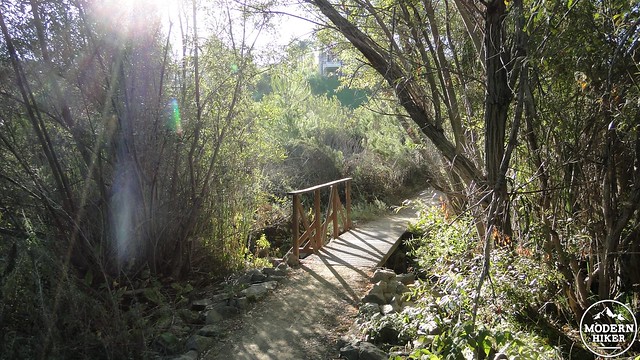 Crossing the second creek past the waterfall

At the second creek, you may hear a steady rumble ahead as the waterfall announces its presence. Depending on recent rainfall, the falls will either be a trickle or a healthy gusher. The trail switchbacks away from the falls to go up and over, and a fence prevents anybody from getting too close, again due to vandalism and the needs to protect the sensitive environment. After passing the falls, the trail will cross the same creek upstream through a dense, lovely, but brief riparian jungle. 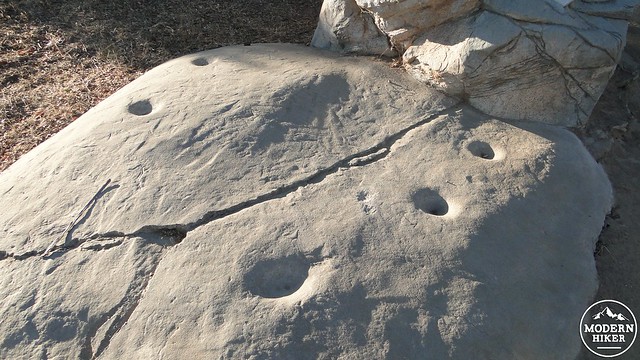 After this last riparian stretch, the trail will bend right again before emerging with a junction indicating a loop. The trail that veers right will climb a small hill and offer good views of the Piedras Pintadas/Lake Hodges area, along with nice views of Bernardo Mountain. Along the way, one will see more interpretive signs describing Kumeyaay life. After a viewpoint, the trail will begin to descend again to drop back down and loop back to the junction. 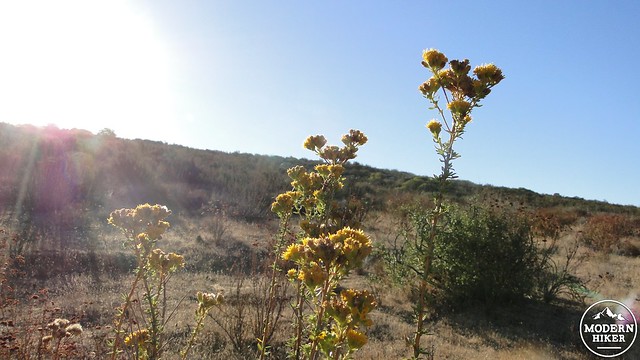 You will pass a trail that branches off to the right to hug the shore of Lake Hodges. This trail continues on for some time, but this track does not cover it. If you wish to spend more time along the lake for bird watching or because it’s just nice to walk along lakes, you may walk down this trail until you wish to turn back. However, if you wish to stay with the GPS track, continue on the loop past a large oak tree. Beneath the oak tree are a number of morteros, which as mentioned earlier were used to grind acorns. This location was likely an important part of the local village where the Kumeyaay would prepare their staple crop and likely conduct important aspects of social life. Another interpretive sign provides details before you continue you.

One more view of Bernardo Mountain

After returning to the junction, you will retrace your loop back over and down the waterfall, across the riparian area/marsh, and then back to where the Piedras Pintadas Trail junctioned with Bernardo Bay. Instead of turning left to double back toward the bay, turn right and begin the trip back to the parking lot through scrubs, grasses, and wildflowers in season. Keeping to the right on the trail will eventually lead back to the parking lot, but along the way, you will see yet more interpretive signs describing the crafts and tools utilized by the Kumeyaay to conduct their daily affairs (including an iPhone made from reeds, mud, and chipped stones).

View from the small hill on the Piedras Pintadas trail portion

After accumulating some knowledge of indigenous peoples, enjoying wildflowers (in season), walking along a lake, and enjoying the wildlife, you’ll return to your automobile from the other end of the parking lot from which you started. This is a rich and surprising hike full of surprises that belies its initially dry and barren appearance. Given the amount of water and wildlife, it is no surprise that the Kumeyaay chose to settle her. To this day, it is also no surprise that the Lake Hodges area remains a popular local hiking destination.

– Due to the potential confusion caused by use trails and unmarked trails crossing the path at times, here is a link to a downloadable trail map which you can also use in conjunction with the GPS to hopefully mitigate any potential confusion.

The trails are well-maintained.

Great little hike. I just moved down here to this area and it is literally right in my back yard. I will try Bernardo Peak next. Keep the north county stuff coming . Great site!!