Every so often during SoCal winters, a Pacific storm will blow through and sweep away just about every bit of air pollution as it makes its way east. In the aftermath of one of those storms, the atmosphere across the southland shimmers and sparkles with diamond clarity. Pick a day like this for the long, winding approach to the summit of Otay Mountain. From this rolling, rumpled peak encompassed in federal wilderness, you will enjoy some of the best bi-national views peering as far as 115 miles north into the United States and nearly as far into Mexico. 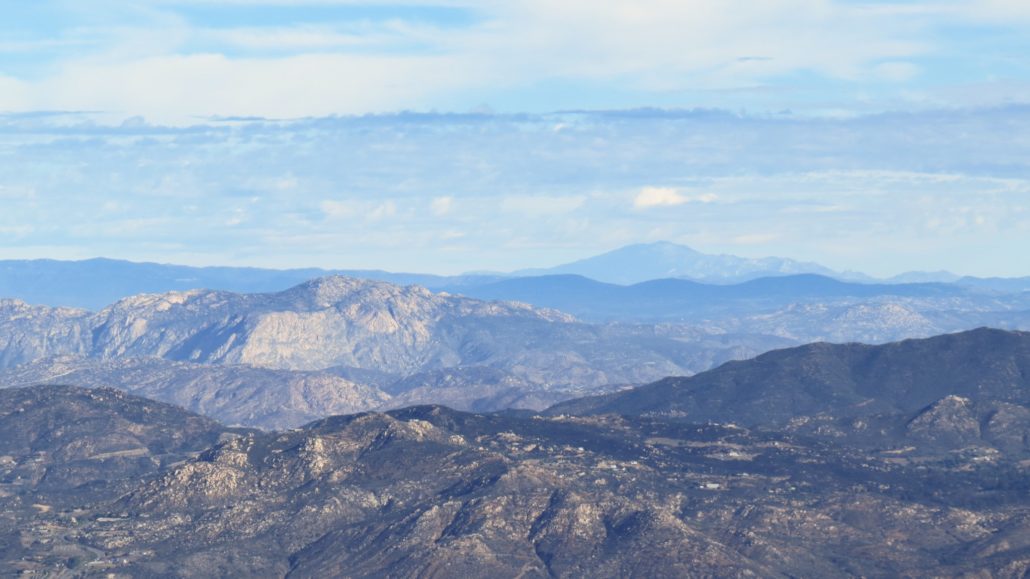 Although the mountain lies within a Federal Wilderness, the usual rules against vehicles and bikes do not apply. Several thin strips of land not included within the wilderness surround the various truck trails that access the antenna arrays at the summit. The reason for this exception is the Border Patrol, which prowls the mountain monitoring the activity of illegal migrants. You are virtually guaranteed some level of interaction with Border Patrol agents on this route, which may be a bit off-putting for some. On the two times I hiked this mountain, I saw numerous Border Patrol vehicles, but did not have any more interaction beyond a lazy wave from an agent who was parked at a picturesque turn-off. 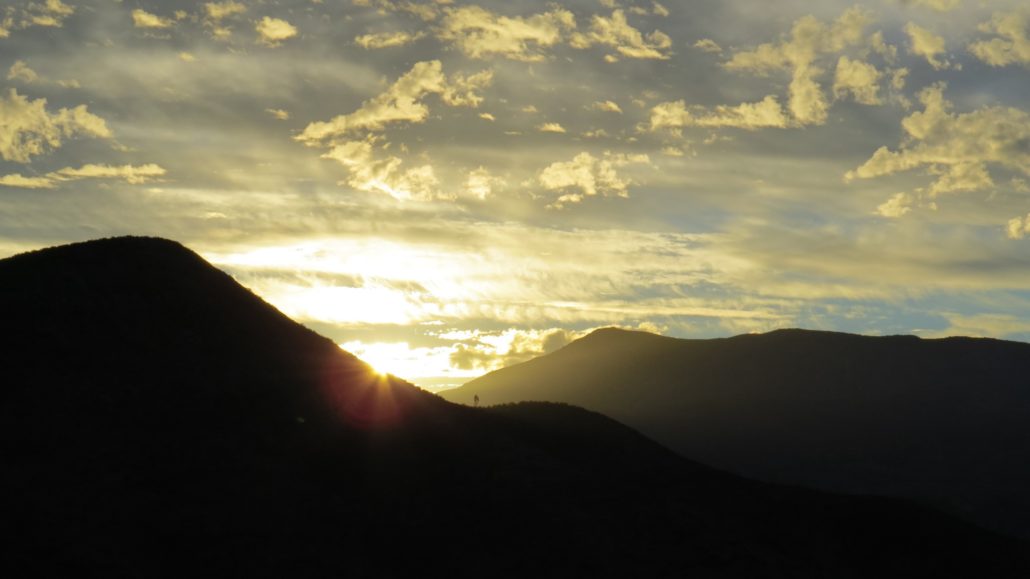 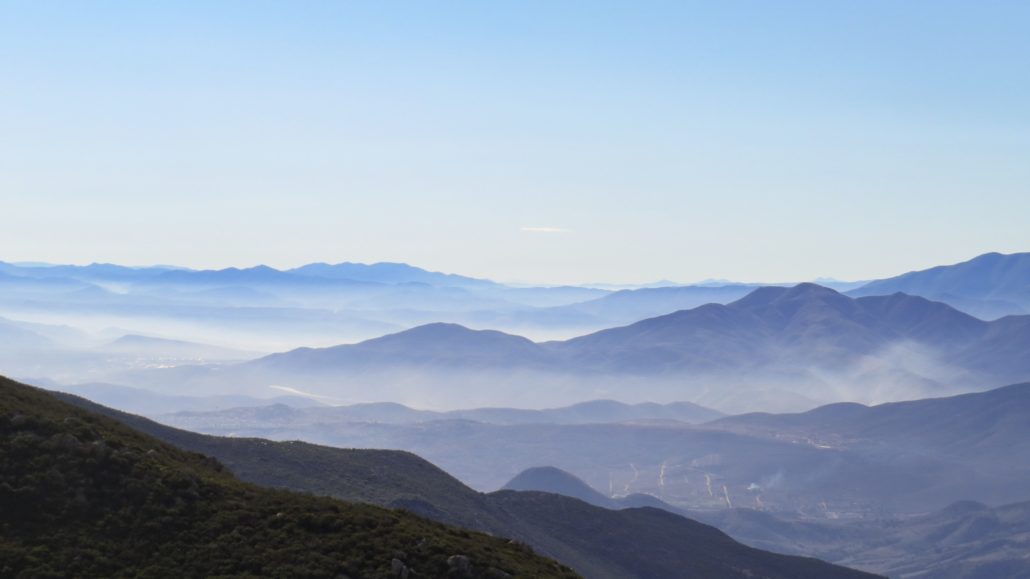 With the mountain’s proximity to the International Border, a standard caveat applies: it’s always a good idea to hike in a group here. Most of the cross-border traffic – at least what little escapes the vigilance of the Border Patrol – is simply migrant traffic. But in the unlikely event that you encounter something more sinister, safety in numbers is a reasonable policy to adopt for this hike. 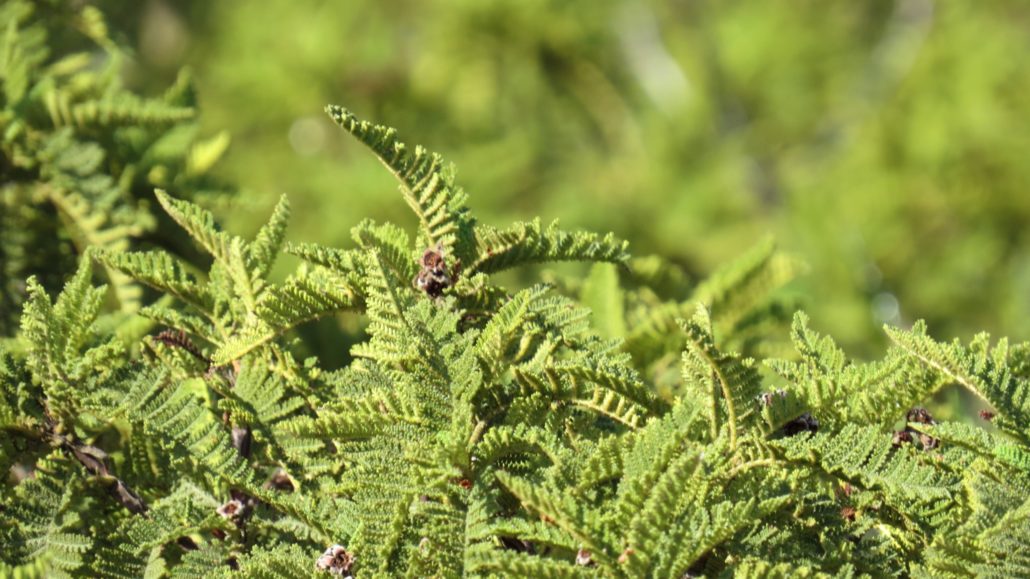 Beyond the magnificent views, a few botanical oddities may interest dendrophiles and phytophiles. The rare Tecate cypress occupies the northern slopes of Otay Mountain at several spots along Otay Mountain Truck Trail. This tree grows in only four other locations across Southern California, including nearby Guatay Mountain in the Cleveland National Forest. Also present in abundance near the summit is fragrant Southern mountain misery. This sticky, sweet-smelling plant is a cousin to the common Sierra Nevada species so-named because of the irritation it would cause to horses attempting to walk through it. The small white blossoms resemble those of the strawberry plant, and its unique fragrances adds an extra layer to the copious amounts of sages and other chaparral plants along the route. 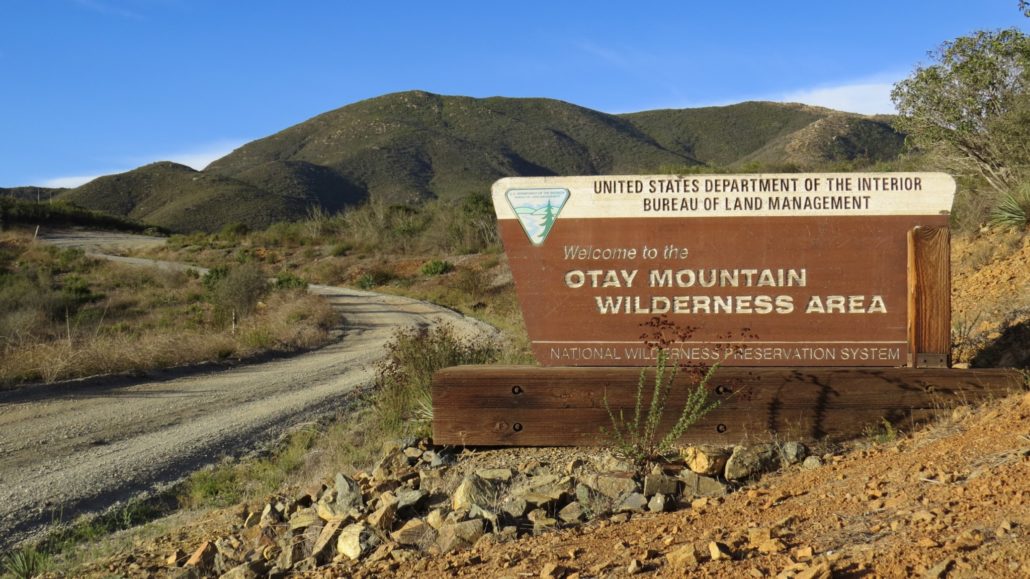 From the parking area just south of the gun club, continue south on Marron Valley Rd. through oak woodland for 0.5 mile to the junction with Otay Mountain Truck Trail. Turn right here, and begin climbing along the bottom of a broad ravine. After passing over a nearly imperceptible saddle, the road dips into a second ravine to a junction with a spur trail at 1.8 miles that heads south into a handful of scraggly oaks recovering from a massive 2003 fire. Just beyond this junction, you will reach the boundary sign marking the border of the Otay Mountain Wilderness Area. 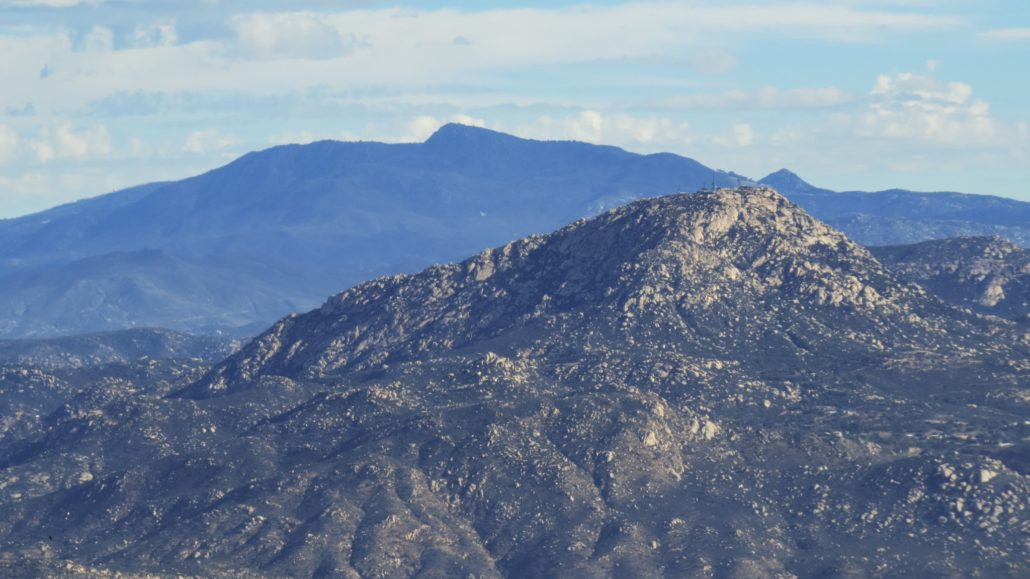 From the wilderness boundary, the Otay Mountain Truck Trail settles into a gradual incline along the north facing slope of the mountain heading generally west-southwest. Views along the way encompass the mountains to the north, with craggy Lyons Peak figuring prominently in the foreground and Cuyamaca Peak looming in the distance. At about 3.8 miles, the trail reaches the beginning of a scraggly woodland of Tecate cypresses. 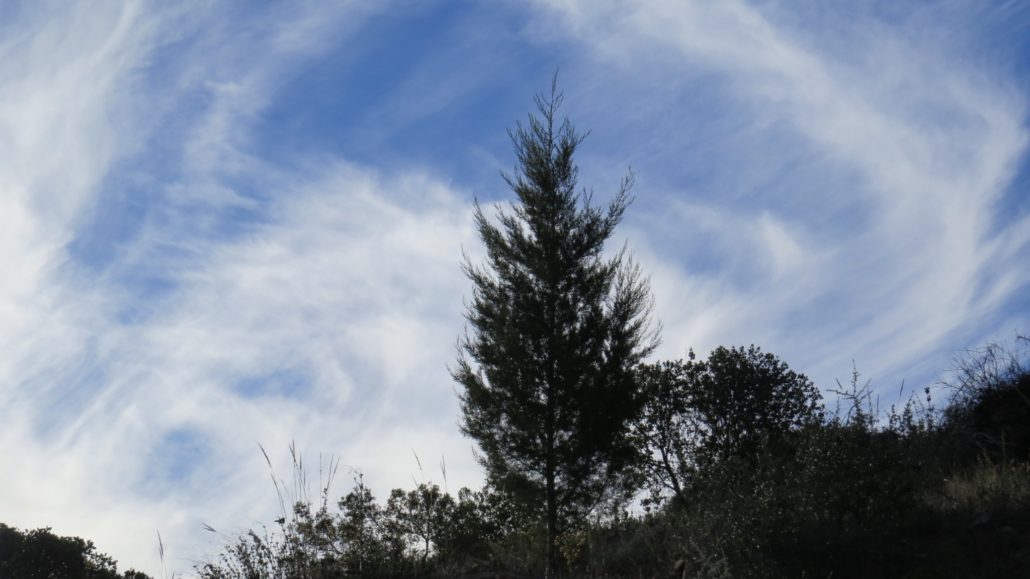 This expansive grove of cypresses was feared to be in dire straights following the aforementioned 2003 fire. Cypresses require fire for reproduction in a similar way as their distant cousins, the sequoia tree, does. Their cones are tightly wound spheres resembling soccer balls that only open with heat. The trouble is that the tree itself is slow growing, and it takes decades for a tree to reach sexual maturity. With the frequency of wildfires increasing from 50-100 years to about every 30 years, it is feared that the cypresses here could burn before they are able to create another seed bank. If that happens, as is very possible in an open space with so much chaparral, the cypresses here would be in further jeopardy. That said, the cypresses have recovered impressively over the last 15 years, and barring any fires they should continue to grace the northern slopes of Otay Mountain. 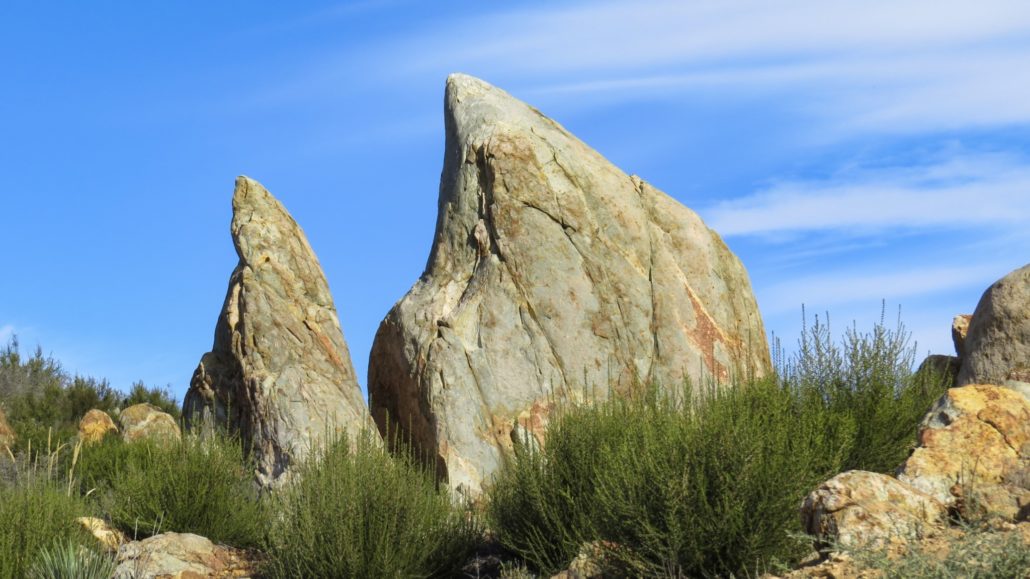 Beyond the cypress grove the trail settles into a moderate uphill groove as it passes several numbered high points that are nearly as high as Otay Mountain’s summit. Occasional spur roads depart from the main truck trail to reach these high points. Many of these spur roads lead to overlook spots haunted by the Border Patrol. You can climb up to the high points if you have the energy, but given how long this route is, you may want to save your energy for the summit and the long walk back. 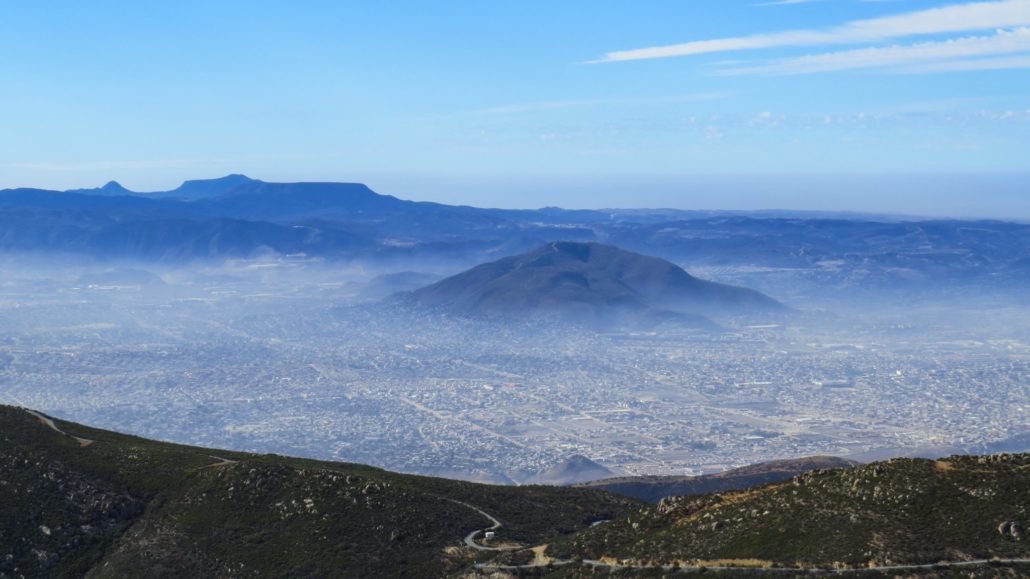 After 6.7 miles, the Otay Mountain Truck Trail junctions with the Minnewawa Truck Trail at Doghouse Junction just north of Otay Mountain’s summit. Turn left at Doghouse Junction to head south. By this point, you will be greeted with impressive views into the rugged interior of Baja California on the eastern margins of San Diego’s separated-at-birth twin city, Tijuana. A layer of haze lies over this chaotic metropolis with a ring of mountains bounding the city to trap the haze in. In few places in the U.S. can you attain such a complete view of Tijuana, so enjoy the vista as you progress south to the summit. 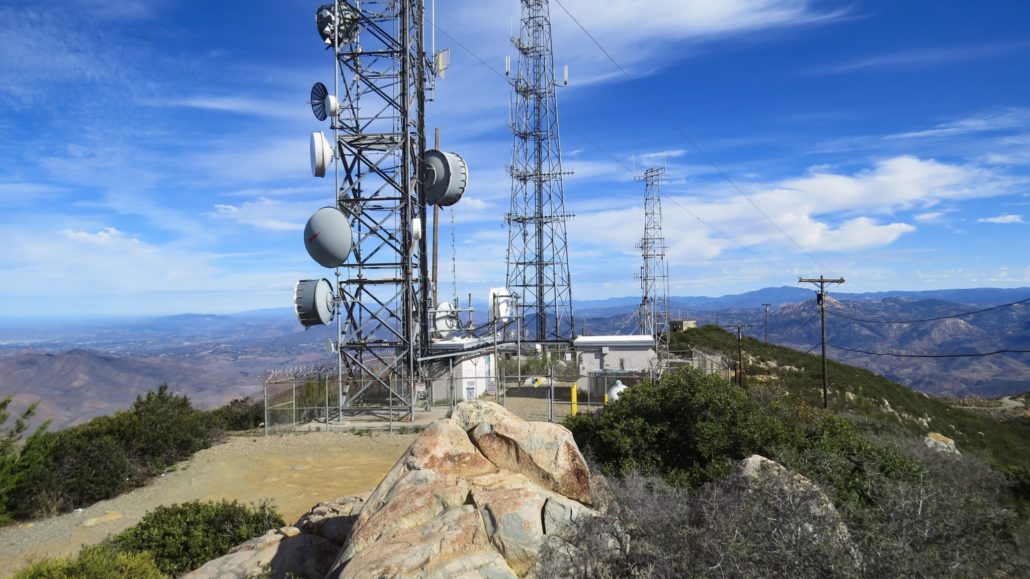 At 7.4 miles, an access road splits from the truck trail to approach the summit from the south. After passing through more groves of cypresses, the road reaches the summit adorned with antennae and adjacent support buildings. All of this infrastructure prevents a traditional panoramic summit view. To get the full Monty, you will have to move around on the summit as the road and buildings permit. 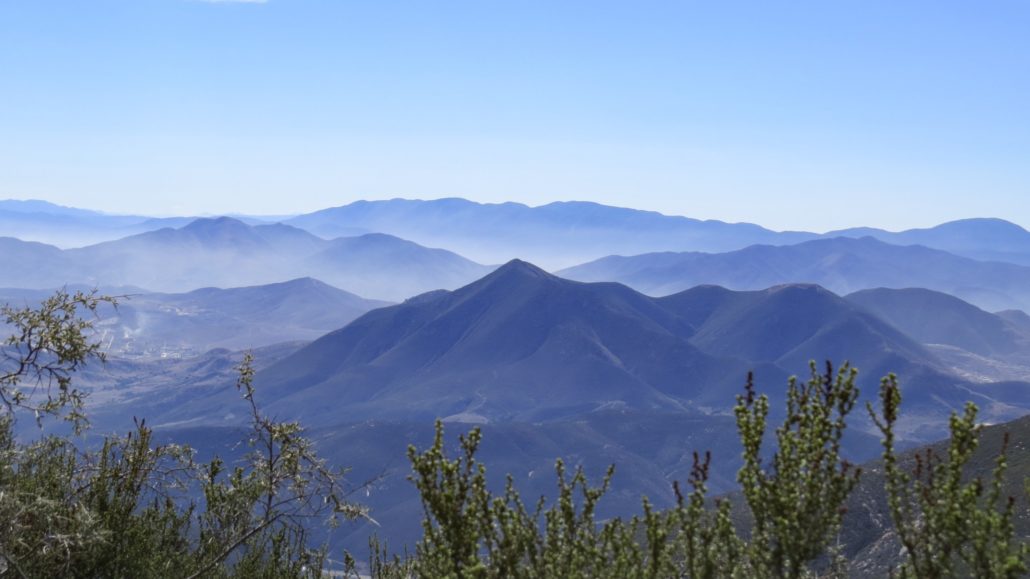 Look west to spy the Otay Lakes glimmering at the foot of the Jamul Mountains and the sprawl of Chula Vista. The rugged terrain of the semi-rural communities of Alpine and Jamul swell toward the highpoints of El Cajon Mountain and Viejas Mountain to the north with larger ranges like the Palomar Mountains and the distant San Gabriel and San Jacinto Mountains just visible on clear days. To the east, Cuyamaca Peak and Tecate Peak are the most notable high points in view, while the southern view takes in all of Tijuana and many northern Baja landmarks. 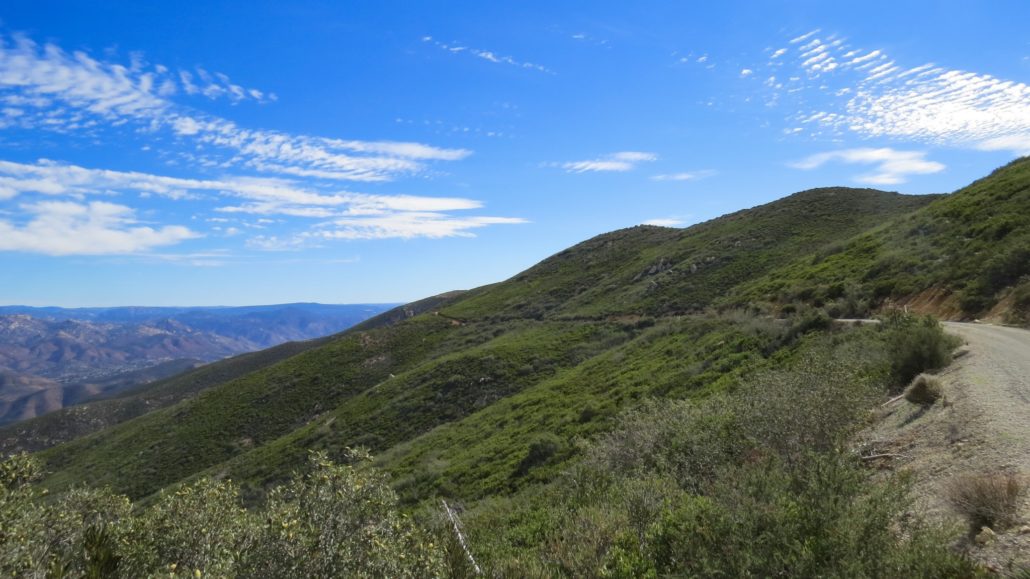 It’s worth stressing that you should save plenty of energy for the return trip. Do not underestimate the length of the return walk, or else you may find yourself wandering back in the dark as an object of interest for the Border Patrol. Early starts and a reasonable degree of fitness are recommended, and if you come prepared, this is a memorable hike with many breathtaking vistas. 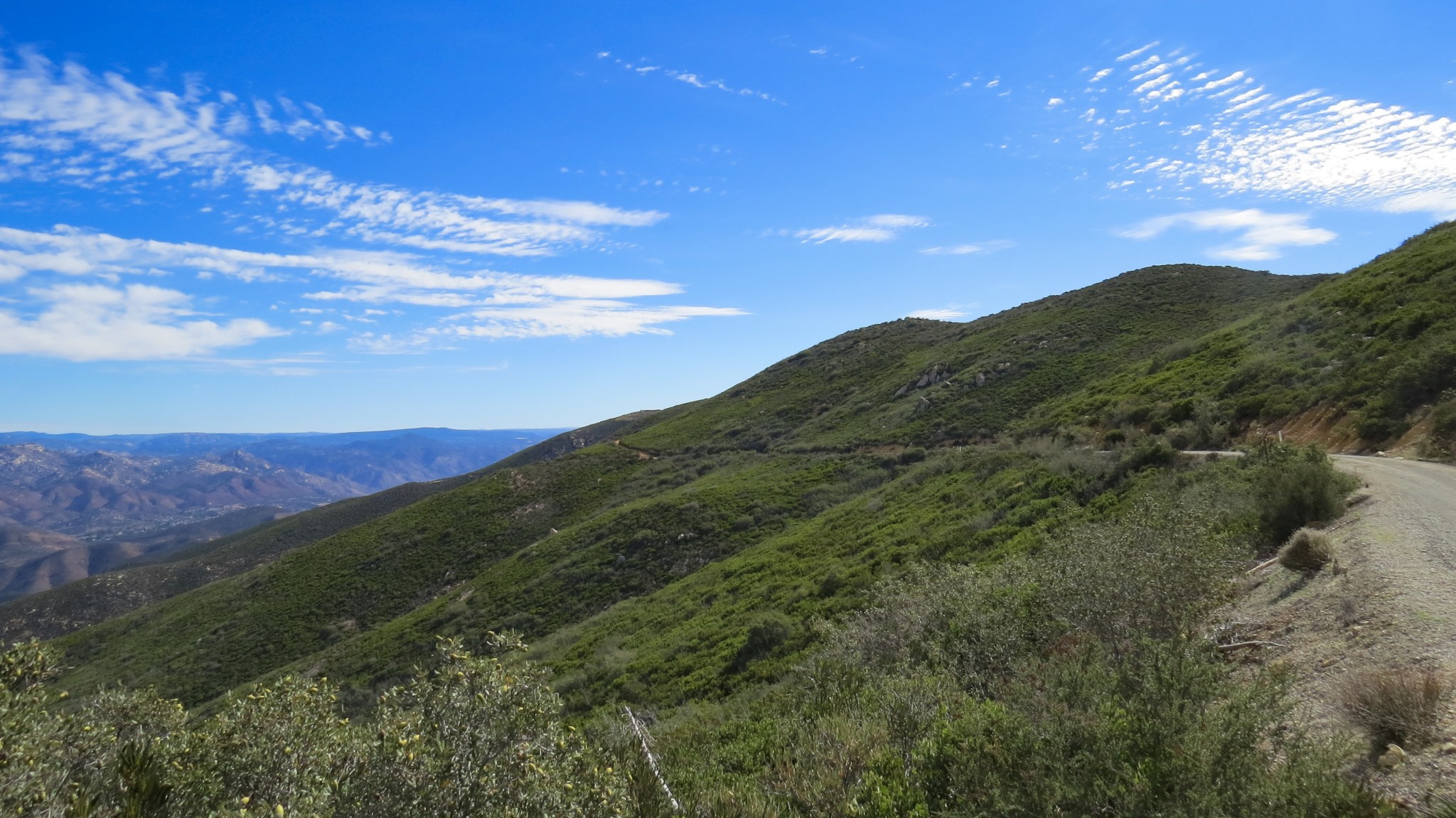 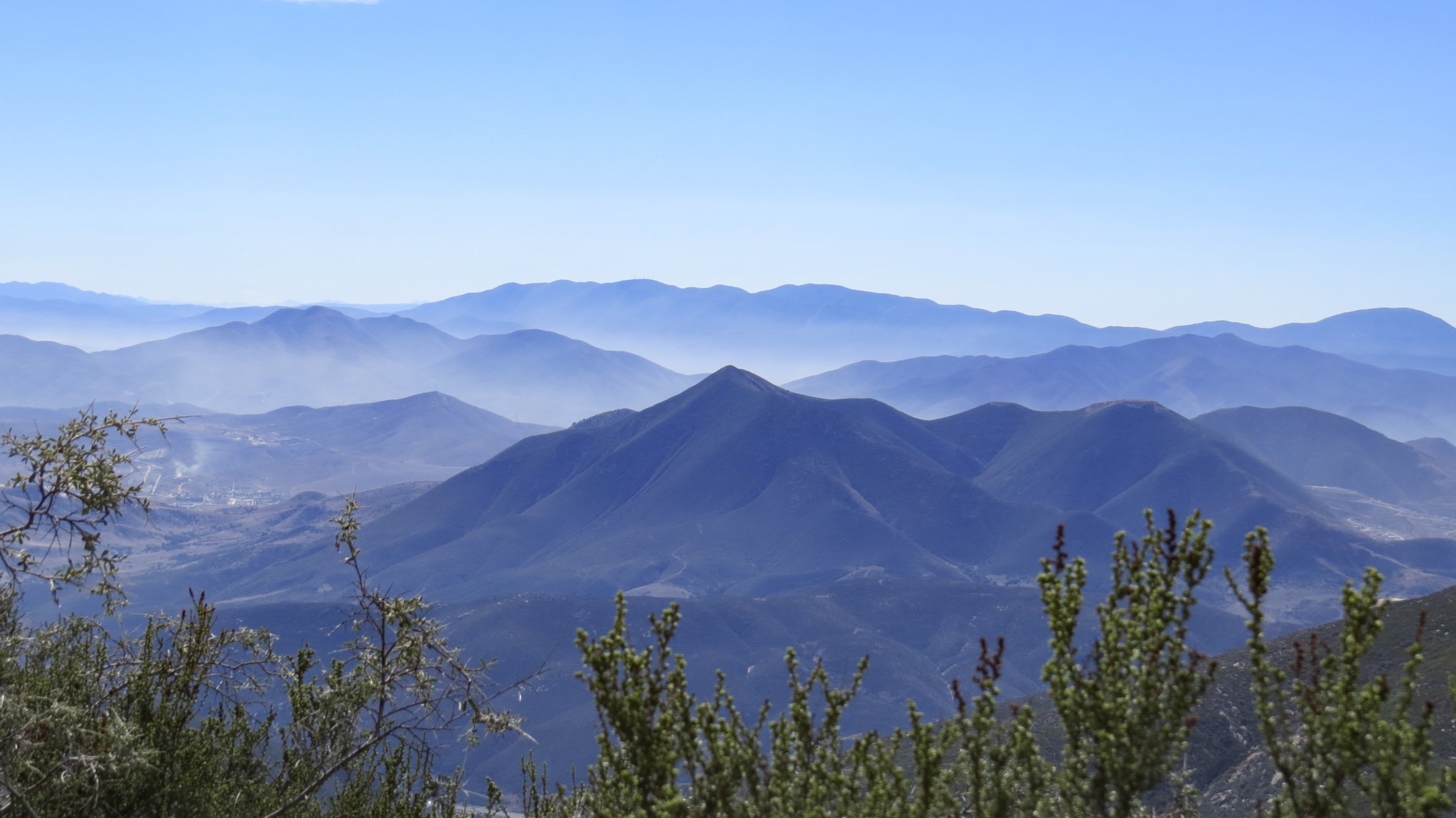 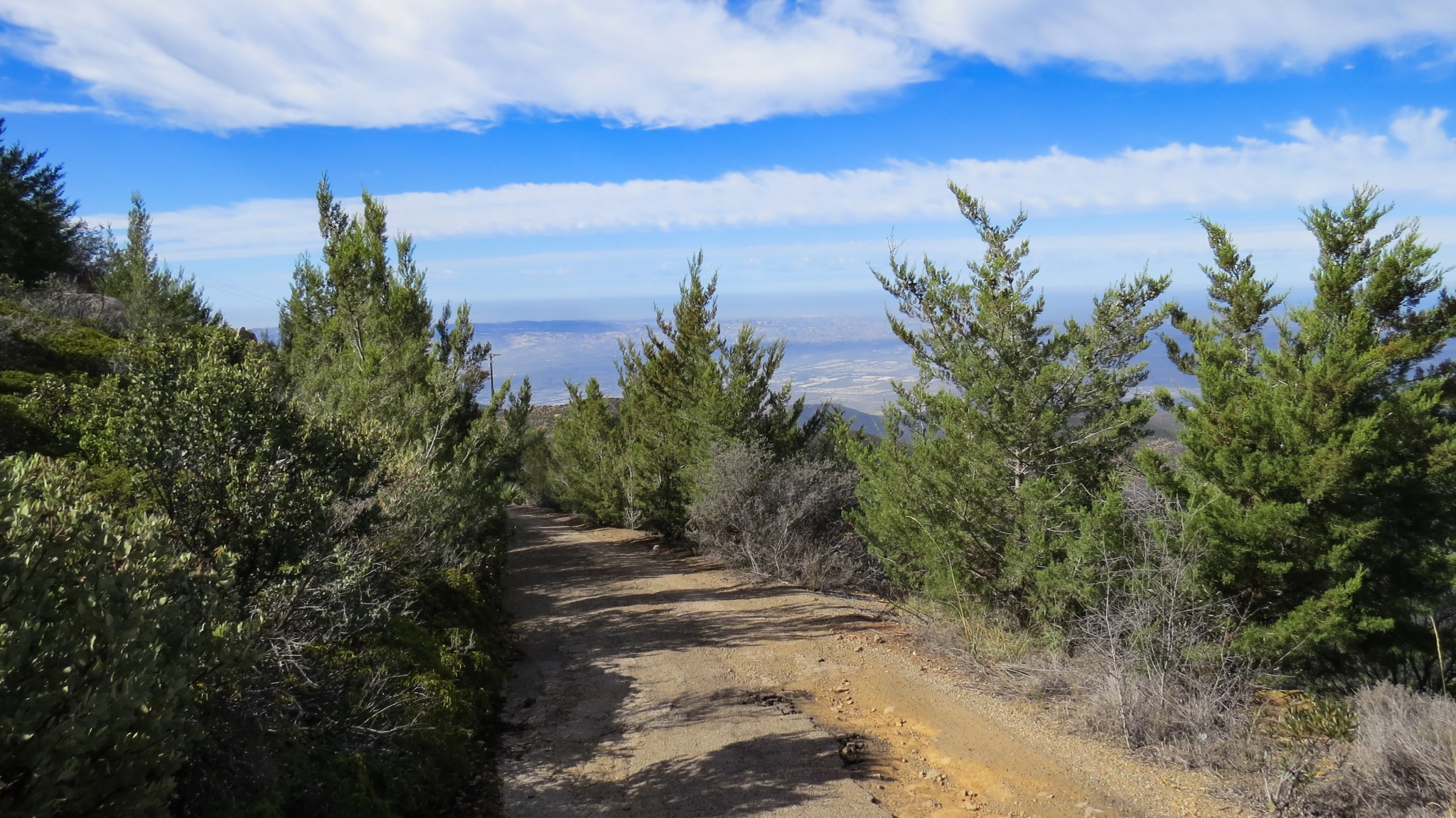 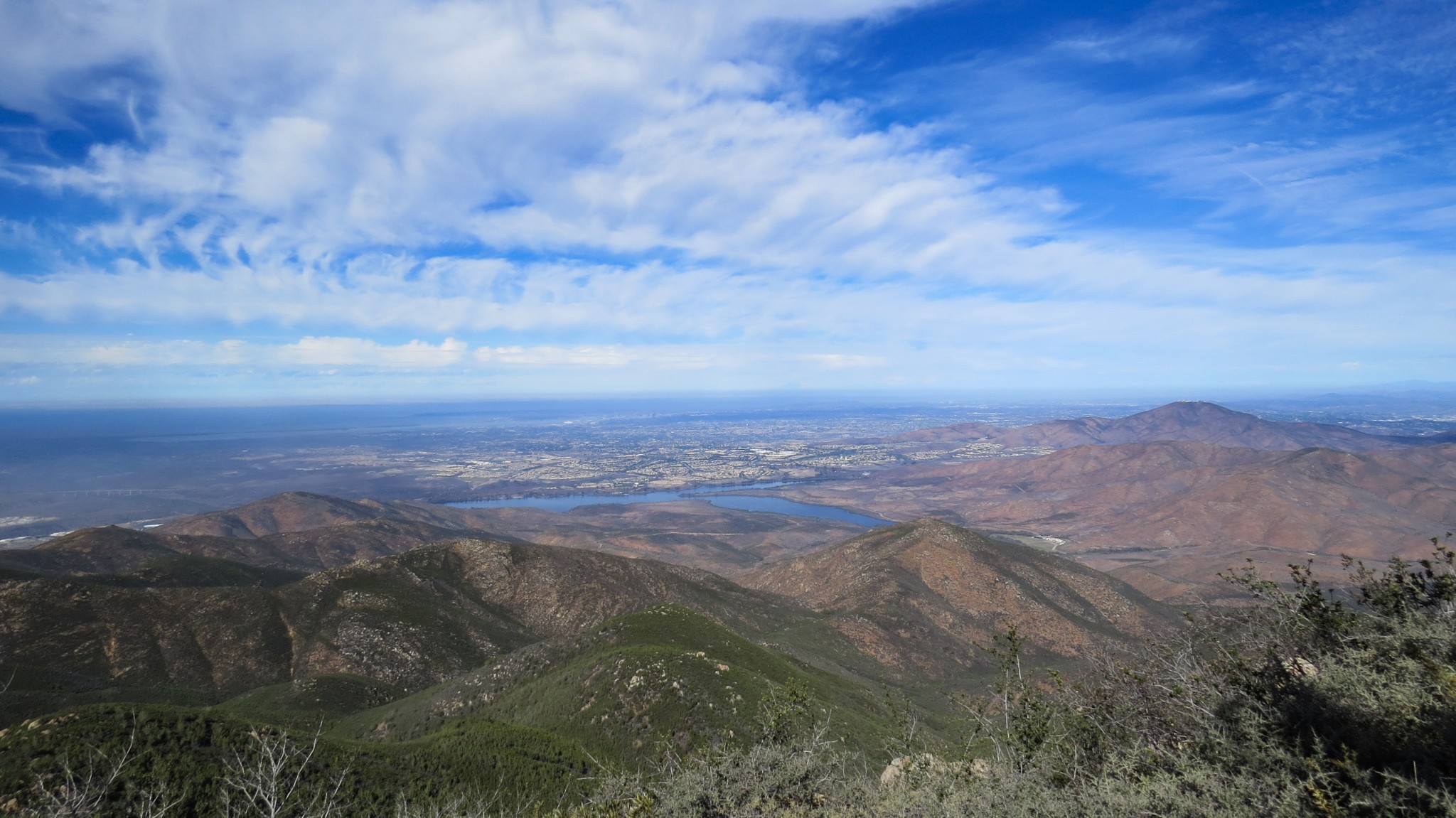 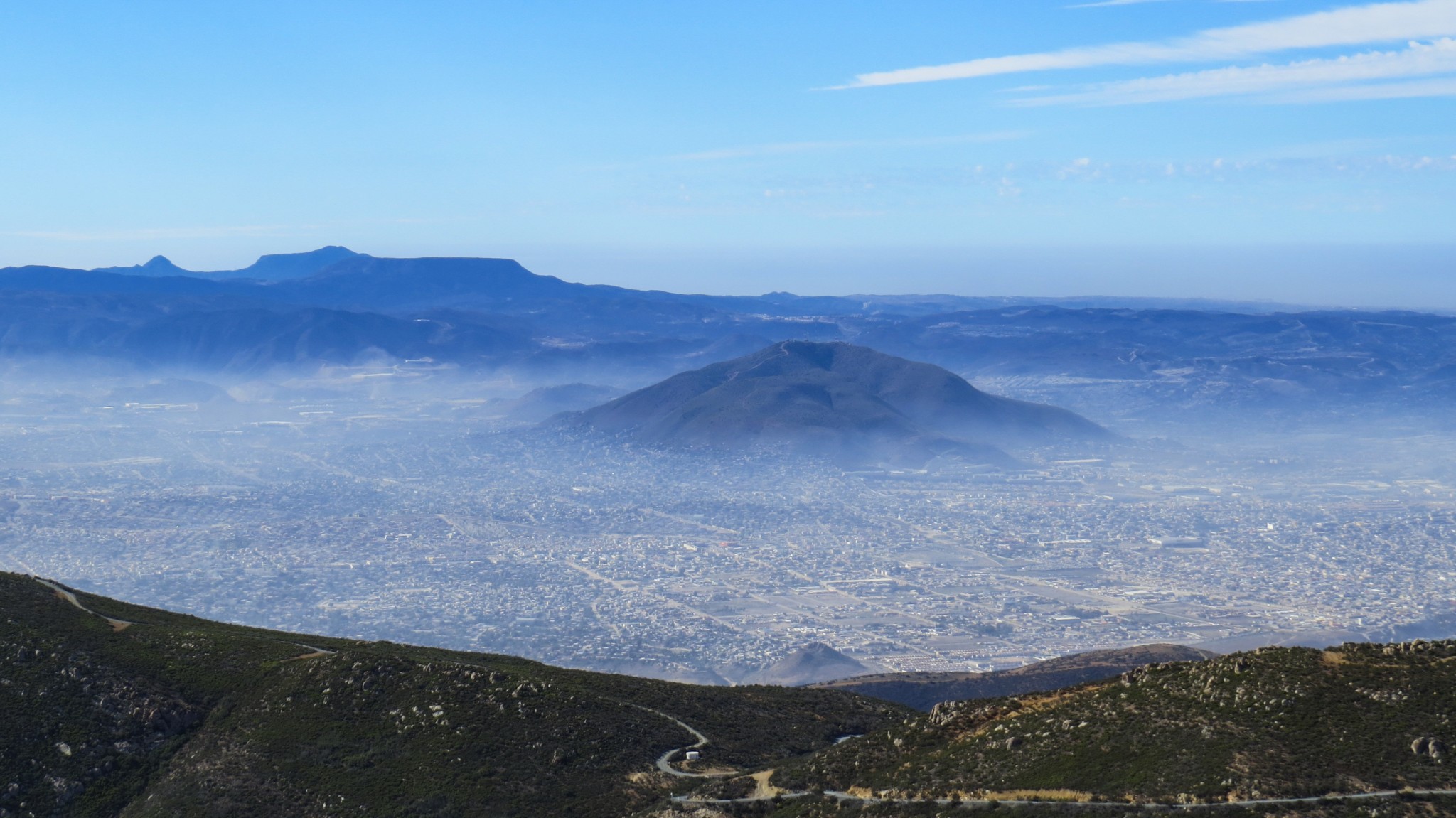 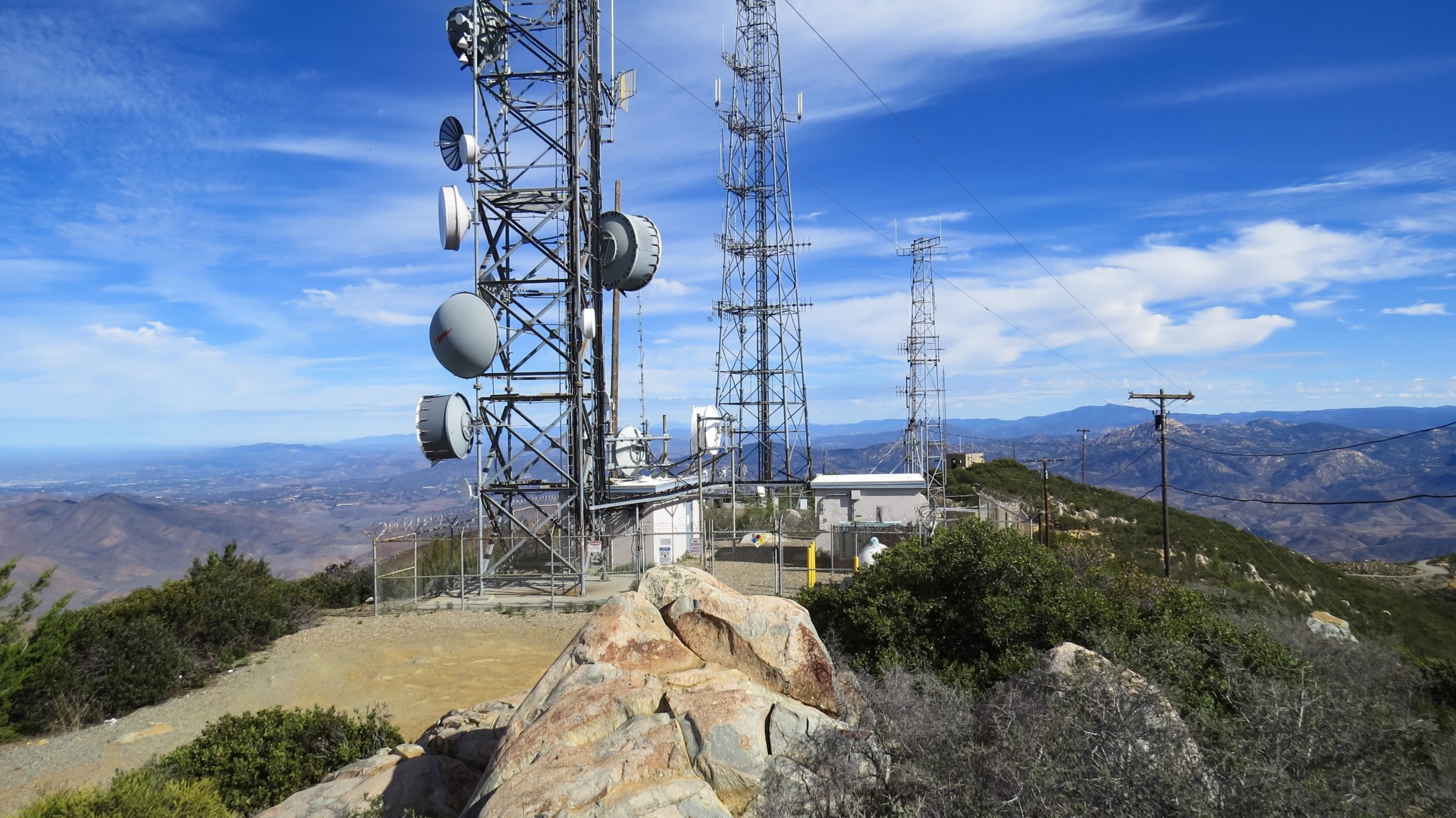 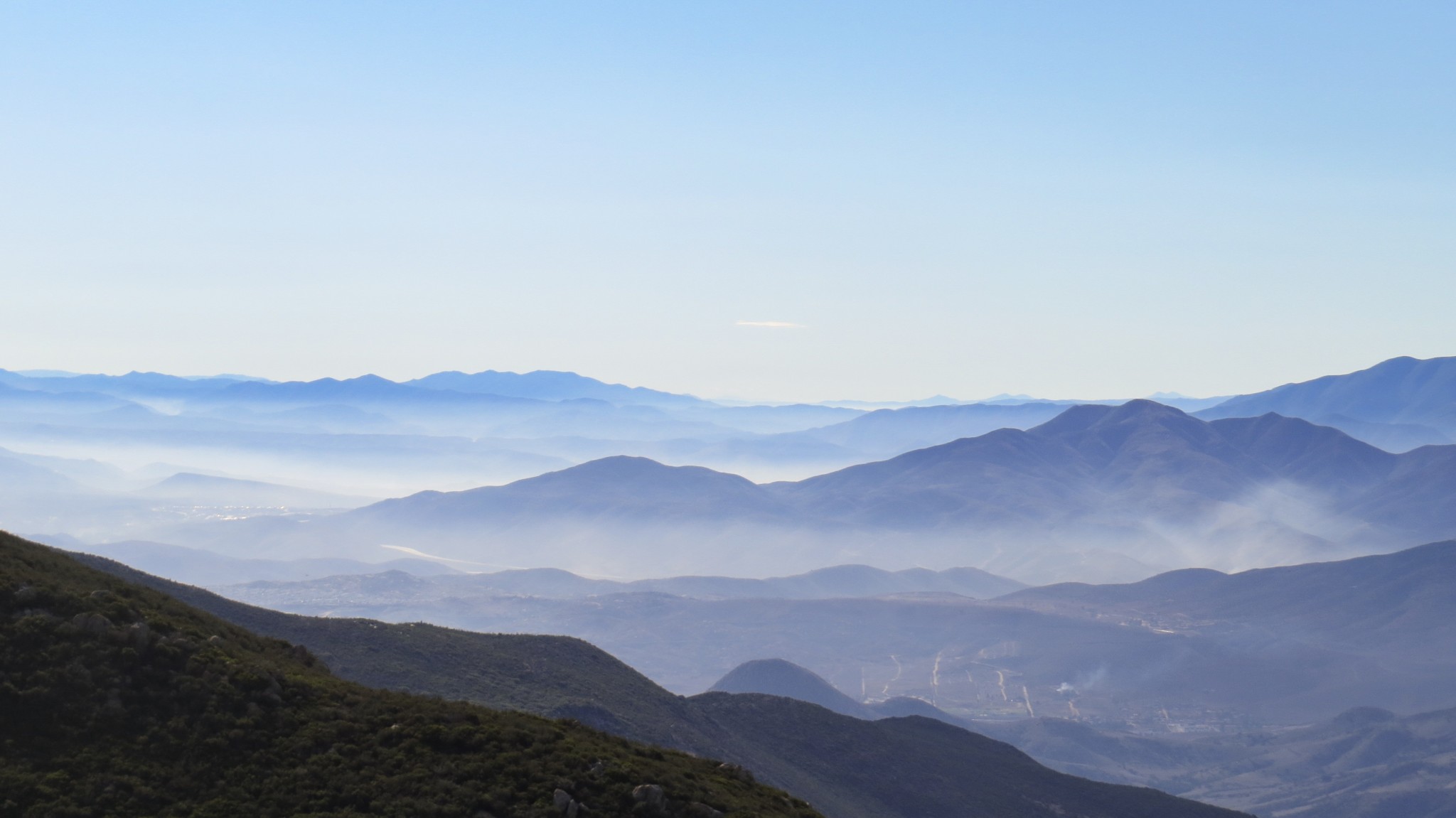 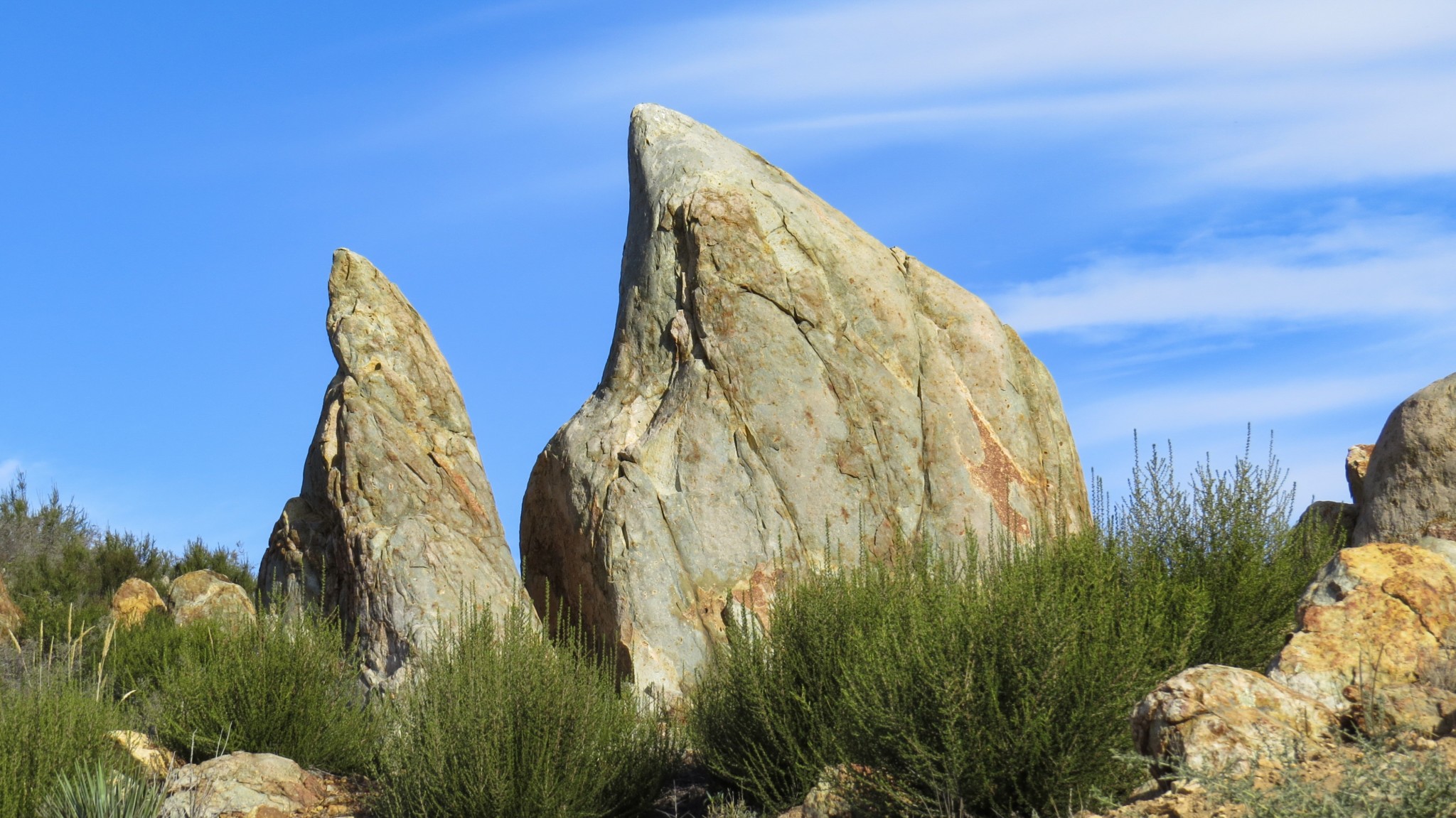 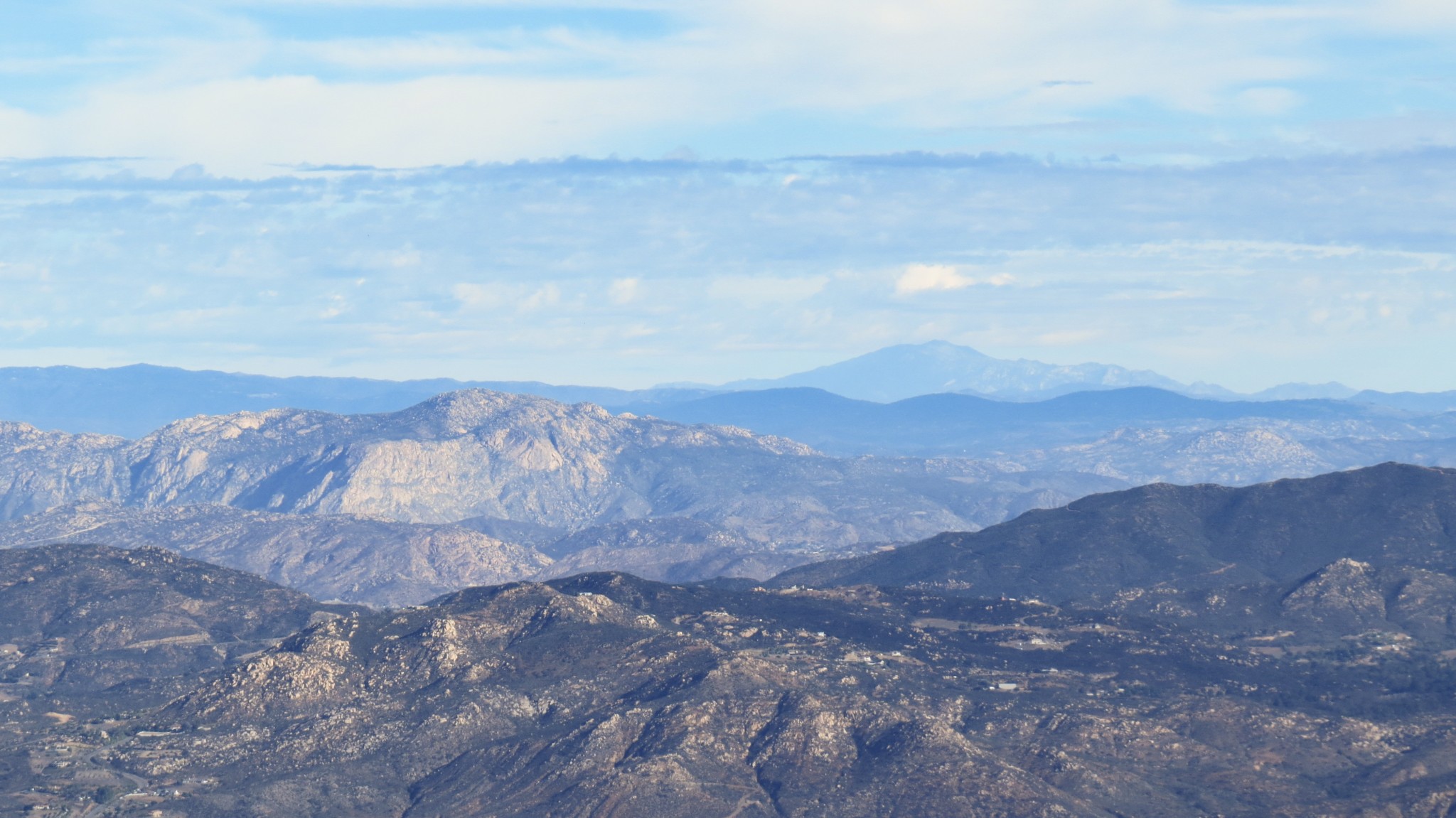 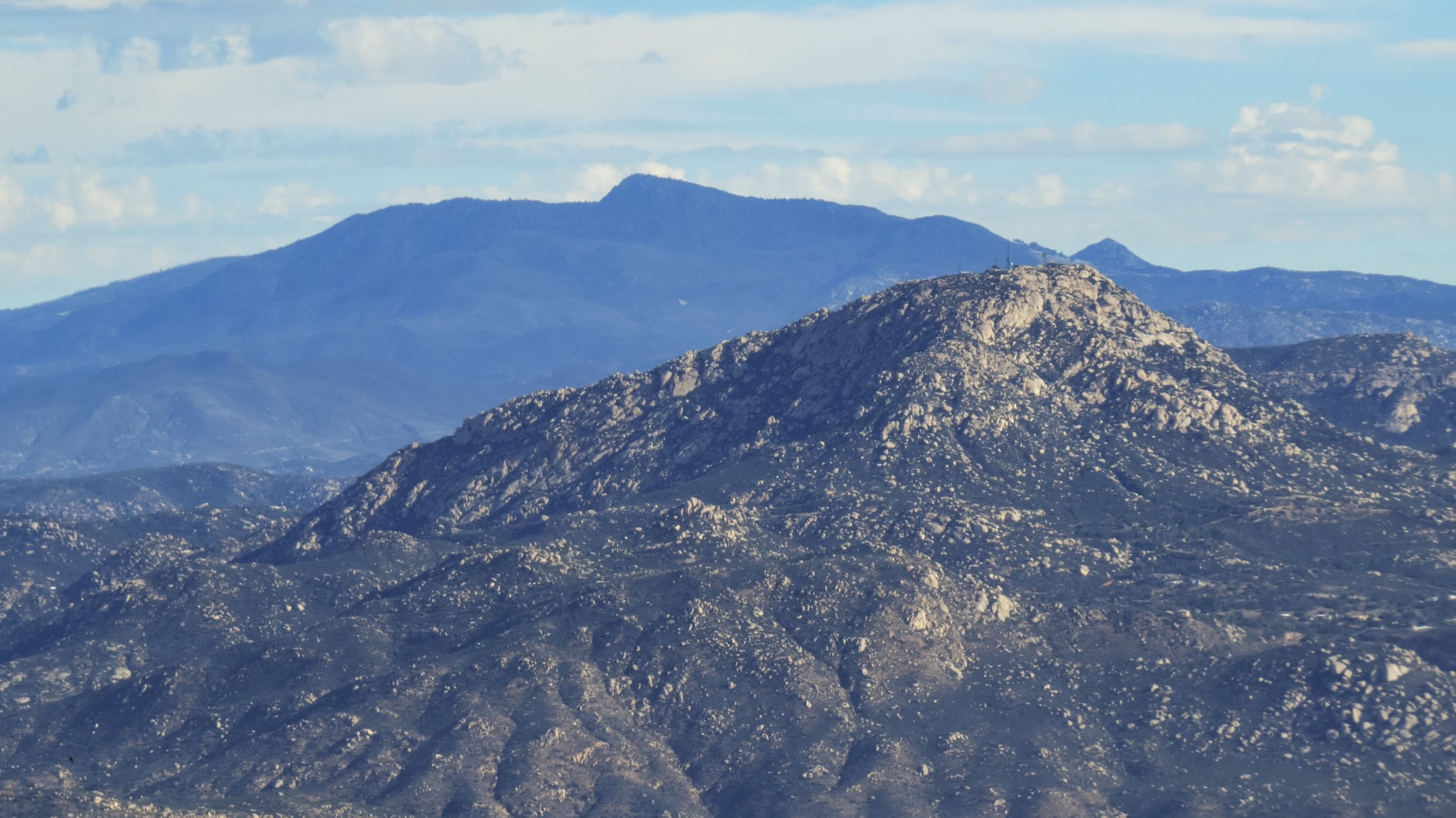 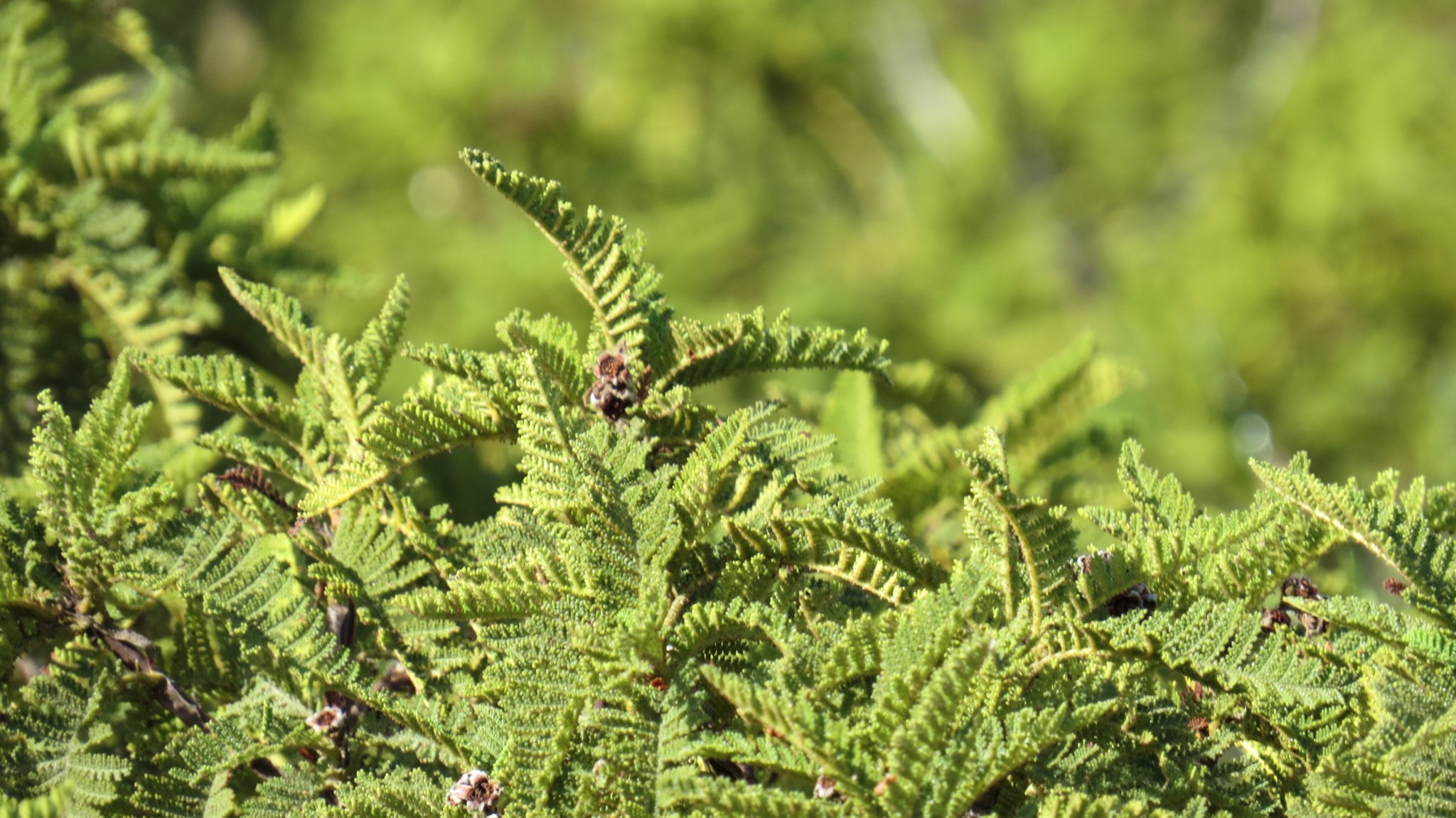 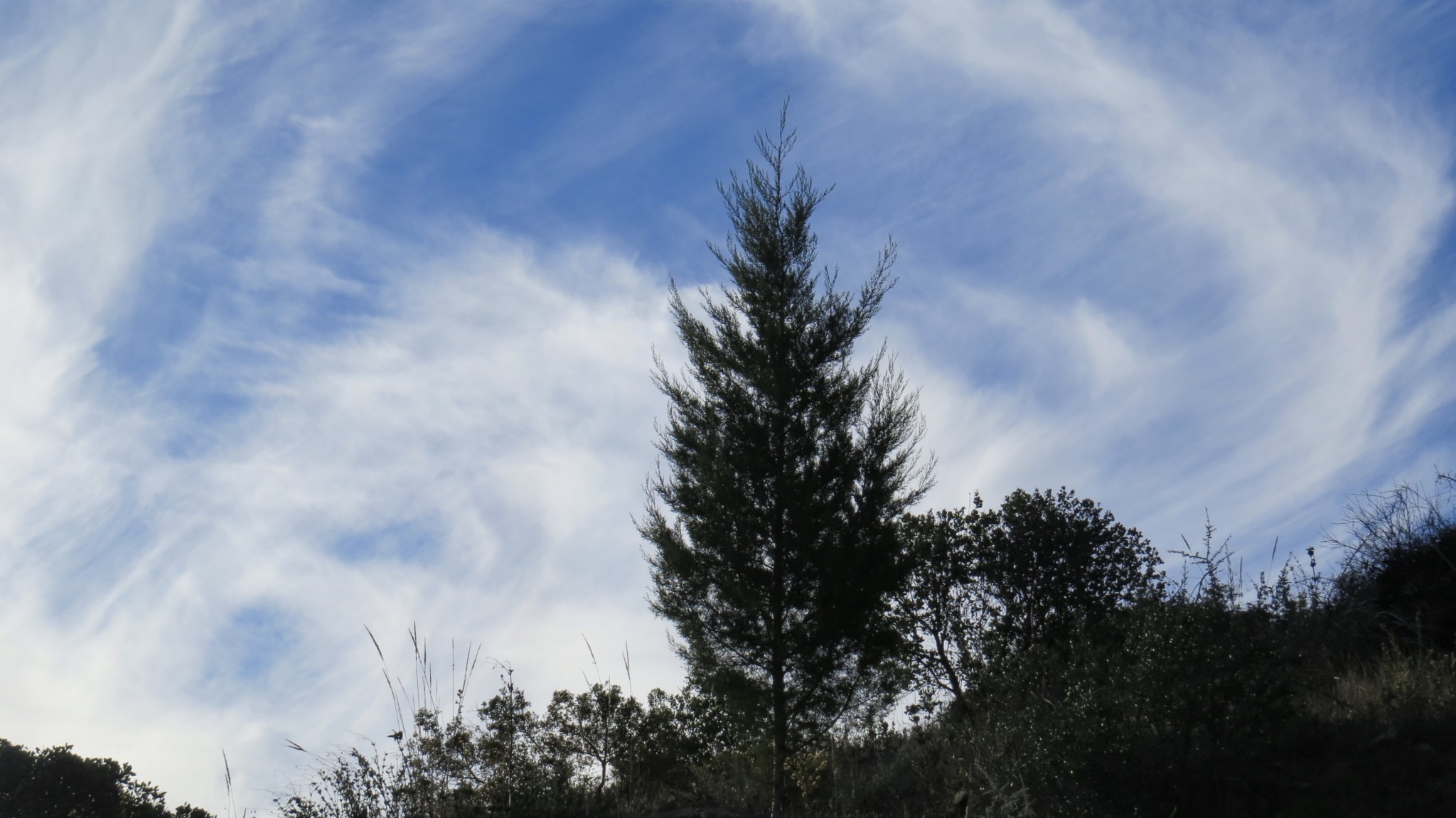 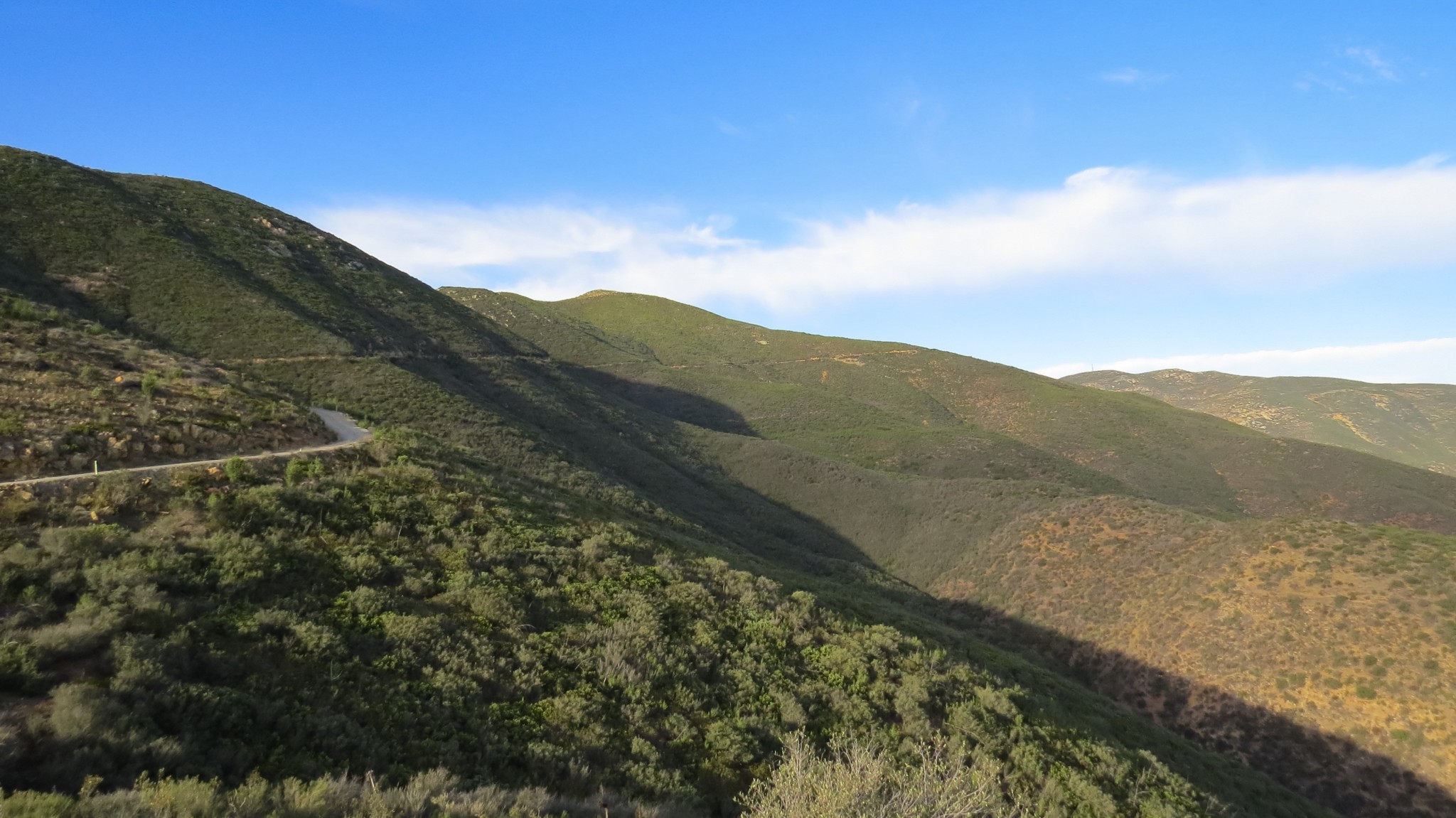 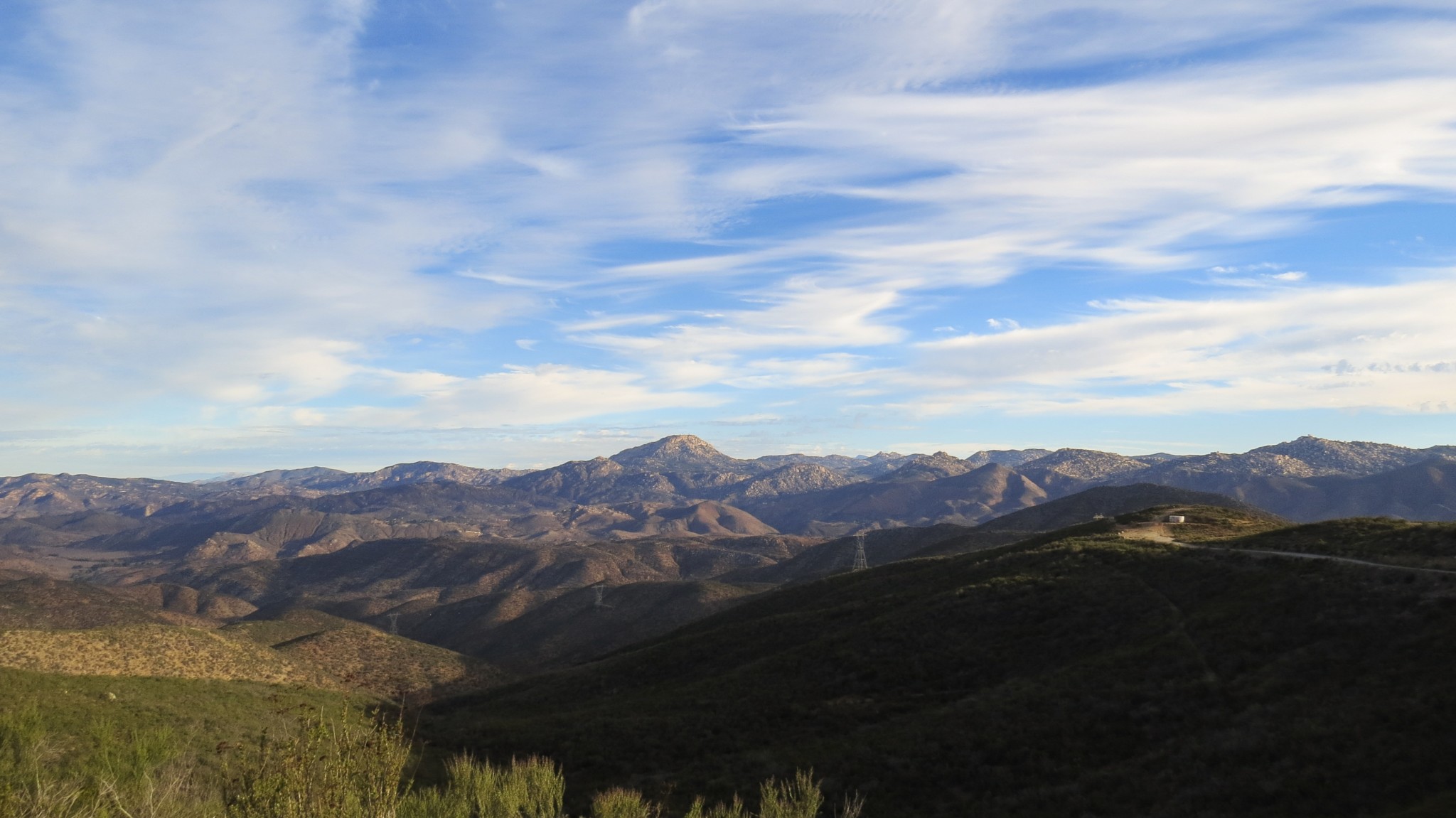 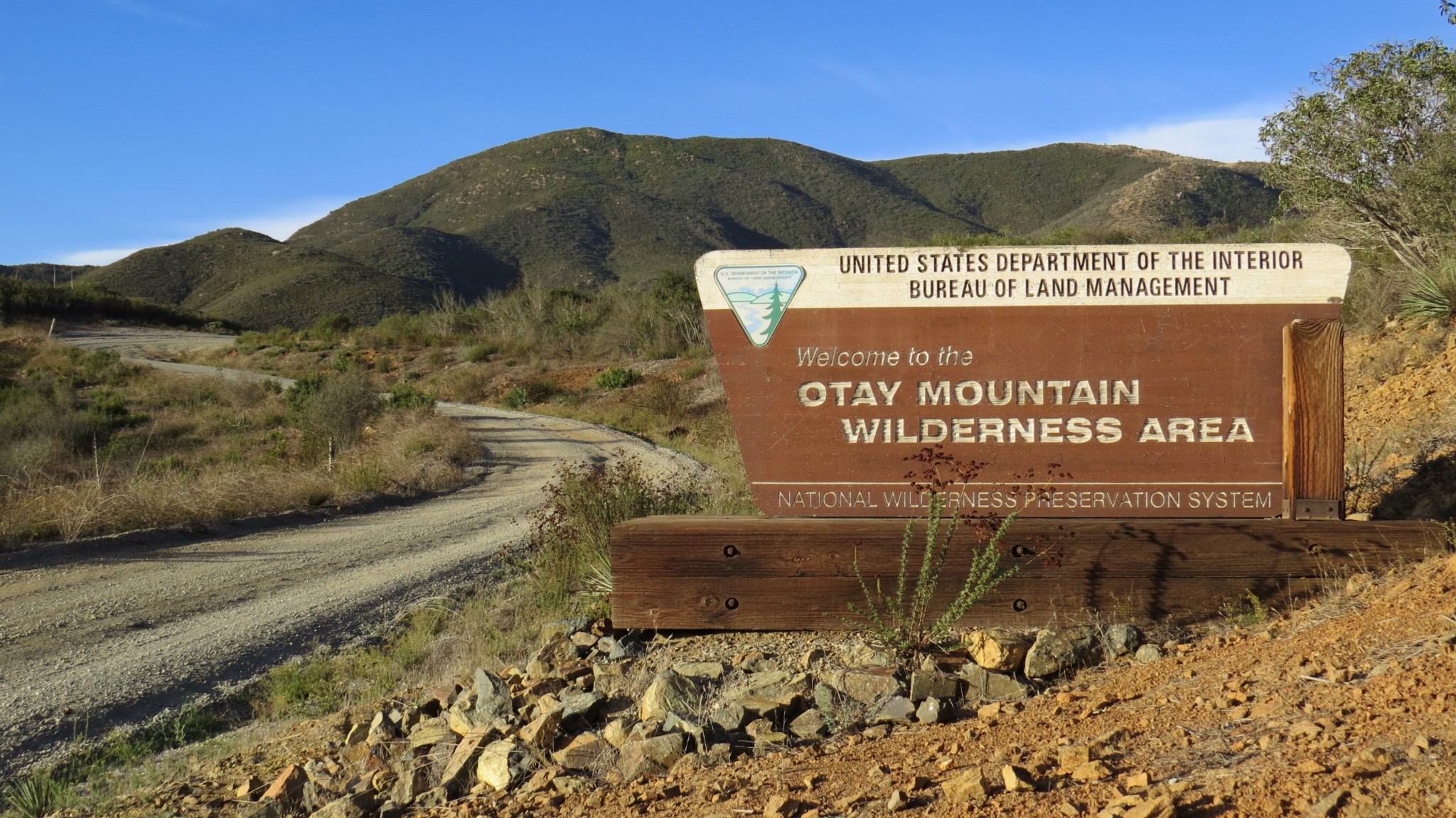 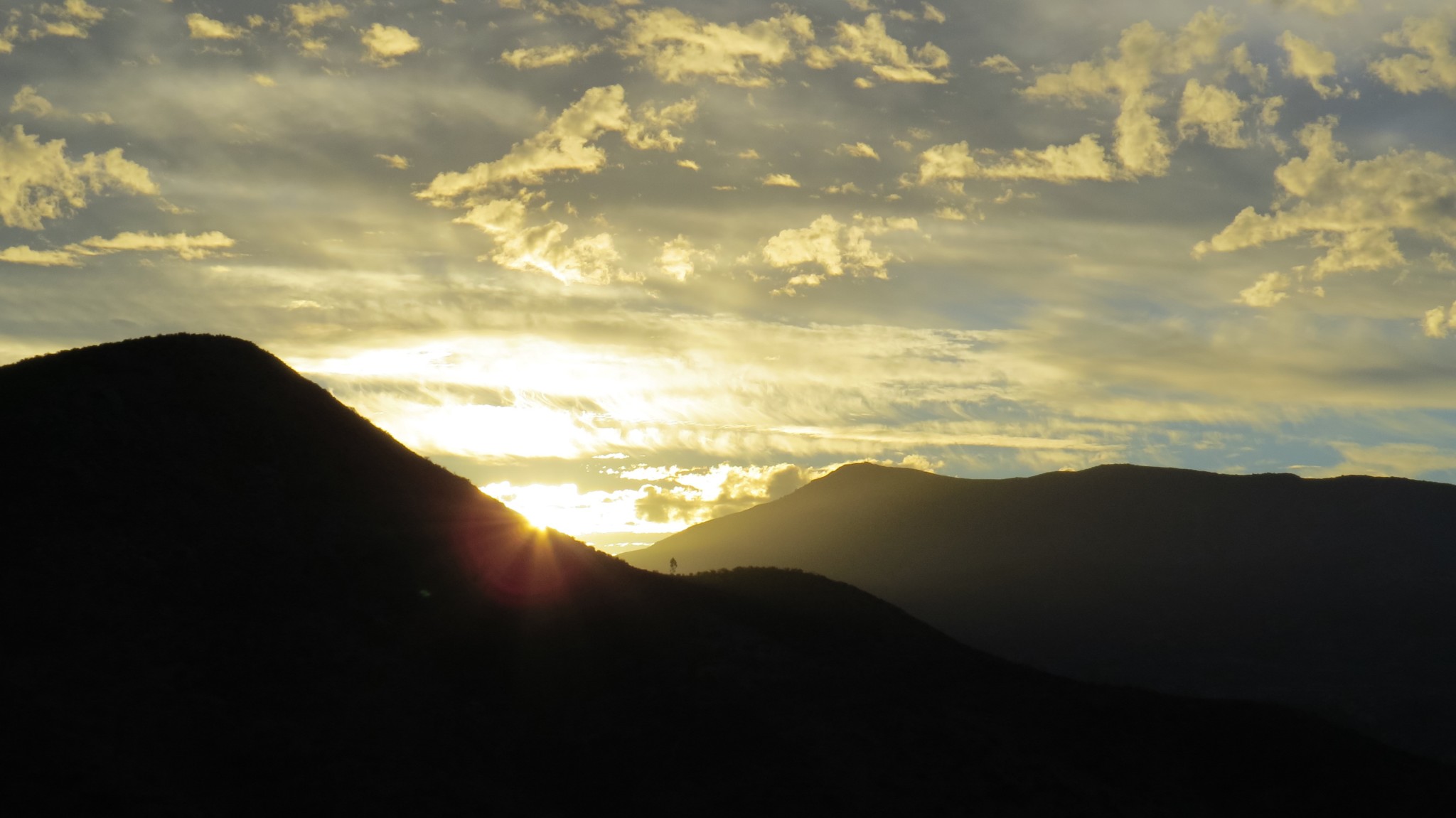 The entirety of the trail follows a well-maintained access road. The road receives frequent use from Border Patrol agents who monitor the wilderness for signs of illegal migration.

The nearest available camping is at Potrero County Park

From San Diego, follow CA-94 east through Spring Valley and beyond to the point where the freeway ends and becomes a two-lane road. Turn right at the intersection of CA-54 to remain on CA-94 (now Campo Rd.) and continue east-southeast for another 14.7 miles to Marron Valley Rd. Turn right onto the dirt Marron Valley Rd. and continue for 2.2 miles past the South Bay Rod & Gun club to a spacious turnout.