Mount Saint Helena, elevation 4343 feet, is a moderately challenging hike in Robert Louis Stevenson State Park, north of Calistoga. The winding, sometimes steep route overlooks Napa Valley vineyards, deep river valleys, and mountain ridgelines. Highlights on this hike are the Robert Louis Stevenson monument, Bubble Rock, and stupendous Napa, Sonoma, and Lake County views. Season-wise, you will see more moderate temperatures in fall and spring than in the sweltering summers. In winter, the park typically gets at least a dusting of snow.

Although there are many theories, the true story of how Mount Saint Helena got her name is a mystery. One theory in the book California Place Names by Edwin Gudde is that Russians aboard a ship called the Saint Helena spotted the peak off the coast and named it in honor of Saint Helena, mother of Russian Emperor Constantine the Great. Another theory links the name to Princess Helen Gargarin, who was married to Alexander Rotchev, the commander of a Russian settlement along the Sonoma coast at the time of the first ascent. 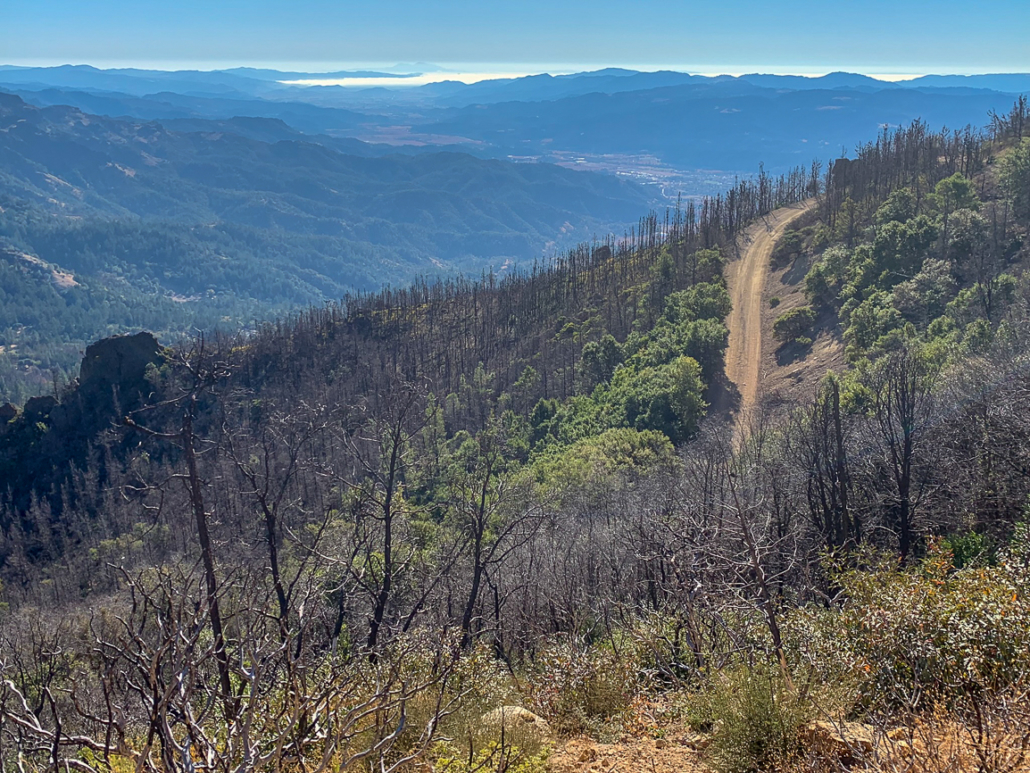 Mount Diablo rises over Napa Valley as you climb higher on the fire road to the summit.

Begin your hike at the staircase beside the Caution sign on the west (left) side of Highway 29. The crumbly trail passes a picnic area and the Stevenson Memorial Trail sign. The trail transitions to a smooth single track under a tanoak, Douglas fir, and California bay forest. 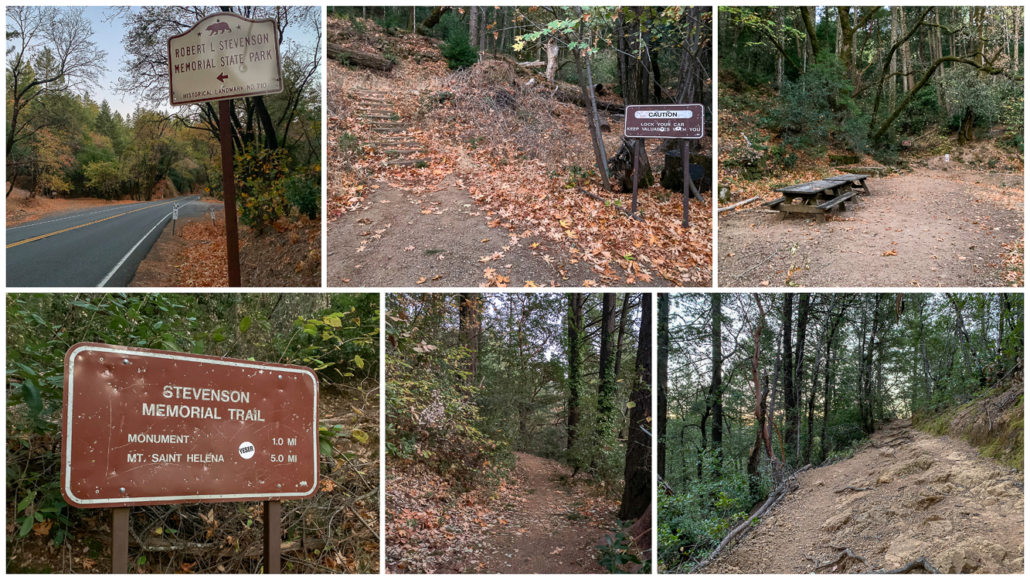 After ascending rocky switchbacks, reach the Robert Louis Stevenson monument at 0.75 miles. Stevenson was a Scottish author in the 19th century who wrote Treasure Island and Strange Case of Dr. Jekyll and Mr. Hyde. In 1880, Stevenson and his wife, Fanny, honeymooned in an abandoned bunkhouse used by miners hunting for silver at the Silverado silver mine in the 1870s. While there, Stevenson also spent time organizing a memoir called The Silverado Squatters. Because of this historical significance, the park was designated National Historic Landmark Site 710 in 1959. 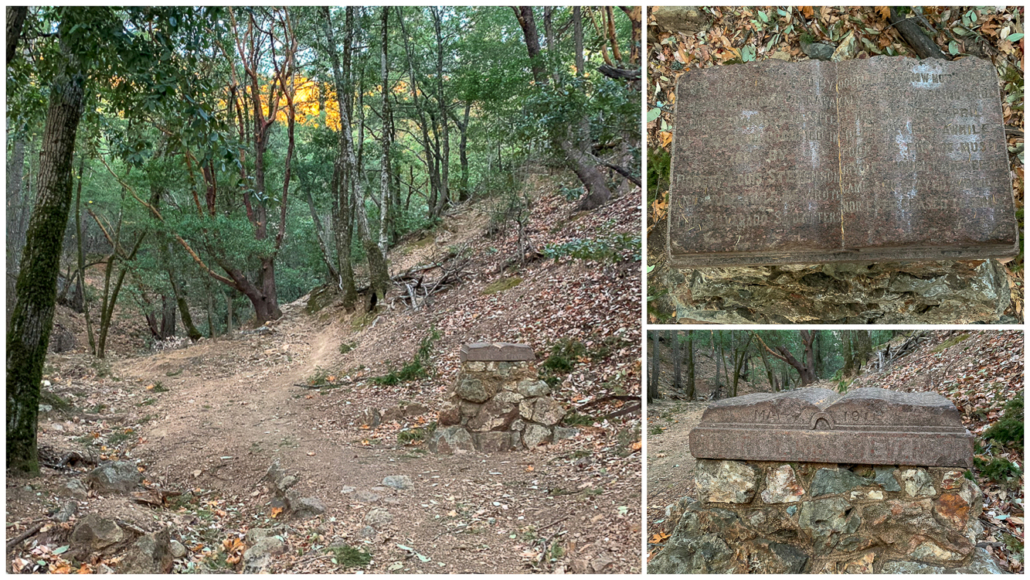 Just 0.15 miles past the monument, merge left onto a fire road towards North Peak, continuing northwest. Around the bend is your first real vista of the hike, looking down the length of Napa Valley towards Mount Diablo. 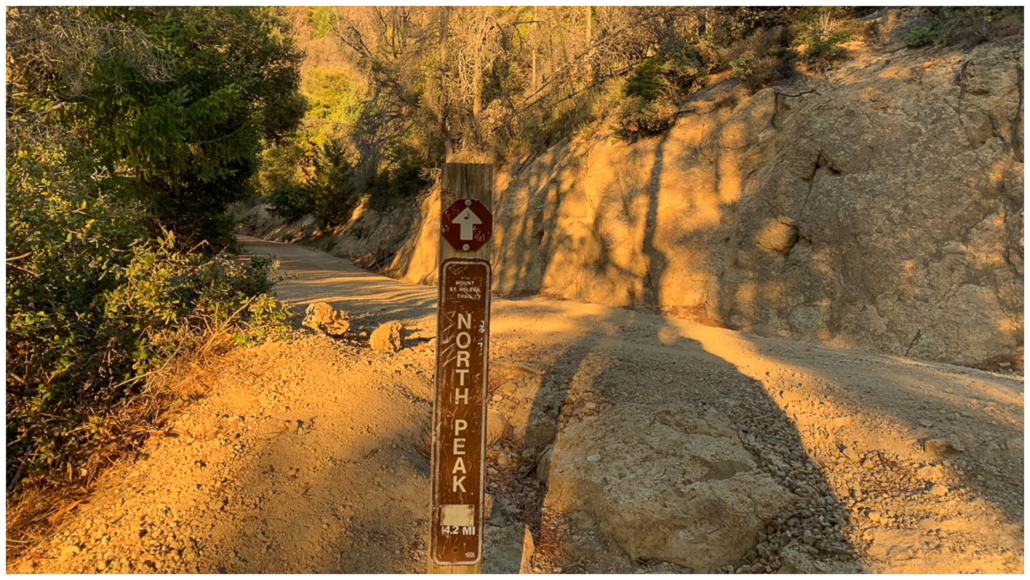 At 1.6 miles, arrive at the delightfully named Bubble Rock, popular with rock climbers. Past it, the road zigzags on long switchbacks past rock formations speckled with manzanita. Mount Saint Helena is part of the Mayacamas Mountains, a 52-mile long mountain range formed from magma that erupted beneath the earth’s surface and created the Sonoma Volcanics. 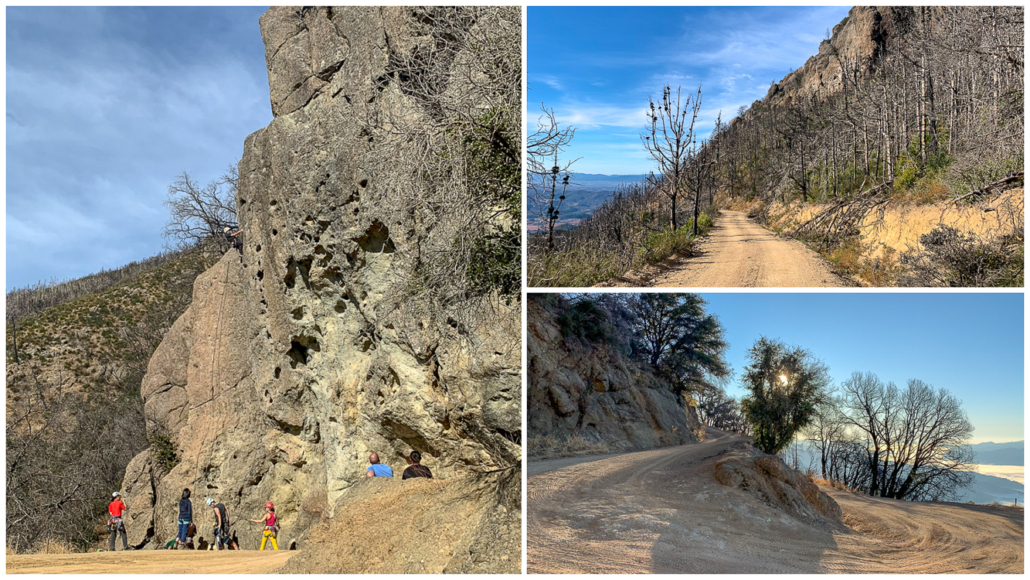 At 3.6 miles, reach a saddle with a spur to South Peak behind you. Straight ahead, where you see a tower with a white, golf ball shape on top is East Peak. The radio towers to the left of it in the distance is your destination: the summit of Mount Saint Helena. Sticking to the main fire road, follow it around East Peak to the summit where it dead-ends. 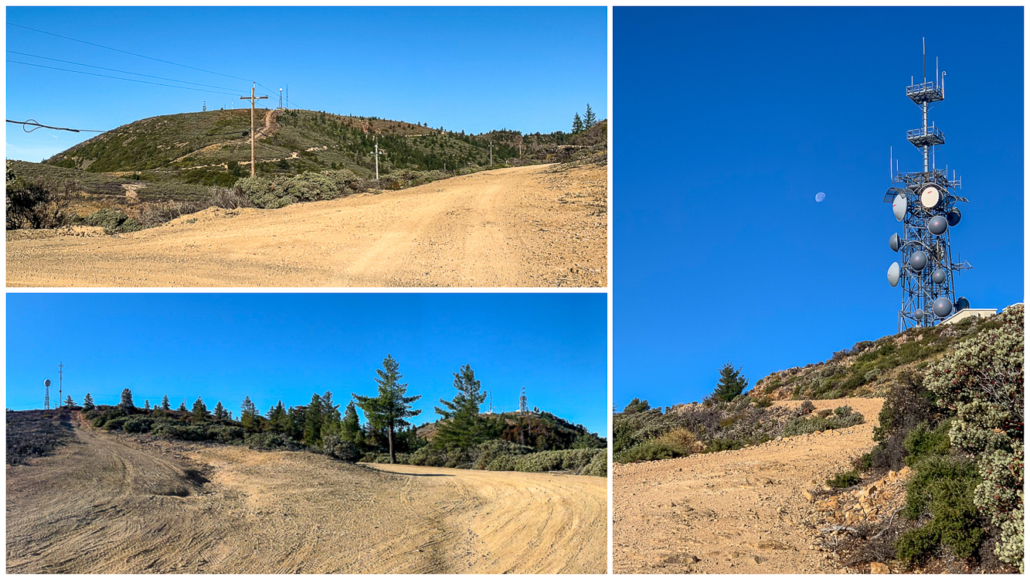 The photo in the lower left shows a spur to East Peak, with the main fire road continuing around the corner towards radio towers on Mount Saint Helena’s North Peak.

At 5.2 miles, reach the summit of Mount Saint Helena. A white plaque on top of a columnar basalt outcropping honors the 100th anniversary of Fort Ross, a Russian settlement along the Sonoma coast that today is a California State Historic Park. The plaque is a replacement of the original metal plate left at the summit in June 1841 when Russians made the first ascent. 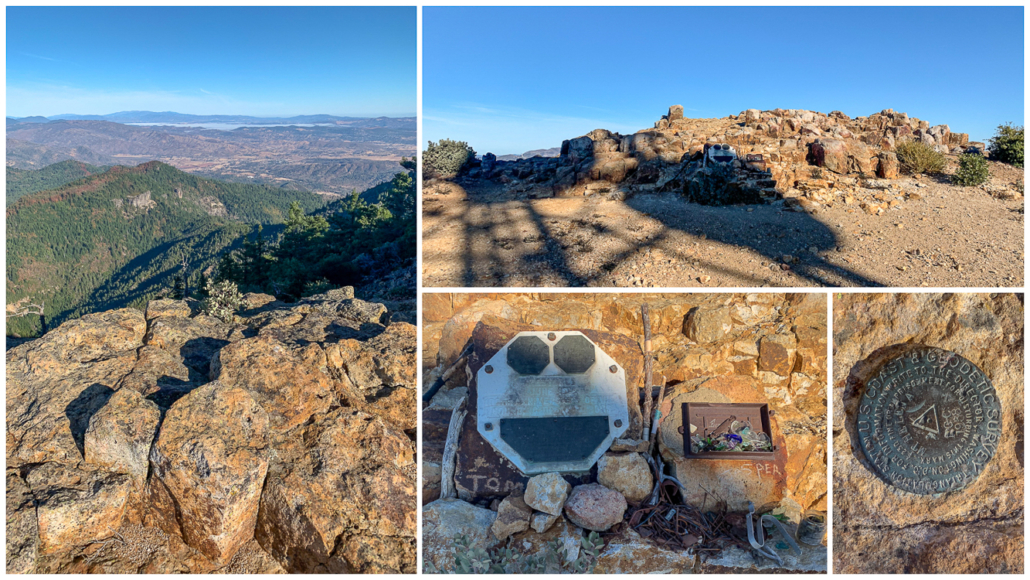 The white plaque with metal plates honors the founding of Fort Ross in 1812, a former Russian settlement on the Sonoma coast.

The nearly 360-degree panorama reveals Mount Tamalpais to the south, Mount Diablo to the southeast, and Cobb Mountain to the north, the tallest peak in the Mayacamas Mountains. On a crystal clear day, you may even spot Lassen Peak and Mount Shasta to the northeast.

Looking north towards Cobb Mountain, 4724 feet, from the summit of Mount Saint Helena.

After you’ve taken a bunch of pictures and had a rest, retrace your steps back to the trailhead. Keep your eyes peeled for the modest turn-off to the Robert Louis Stevenson Memorial Trail on the way down. 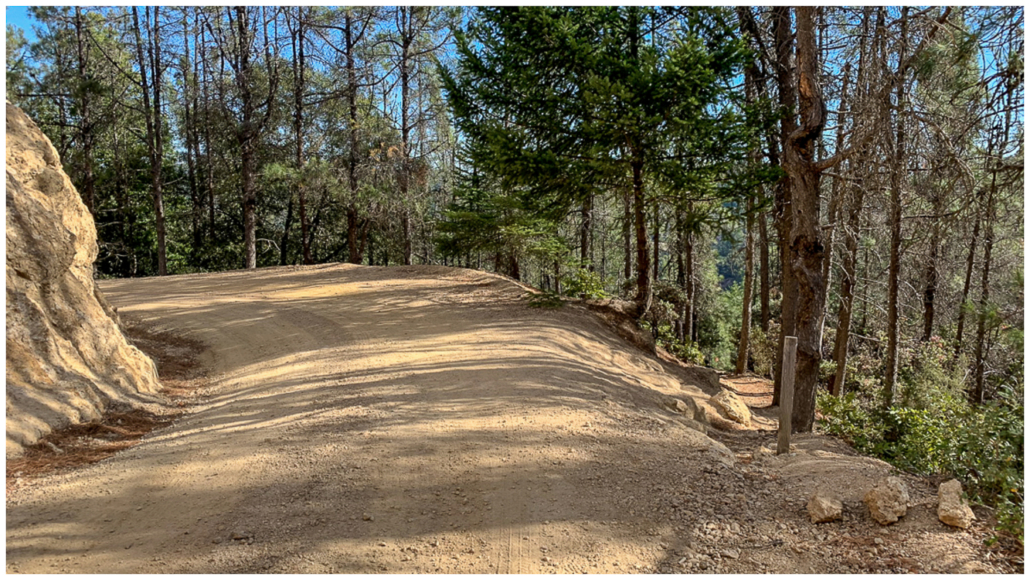 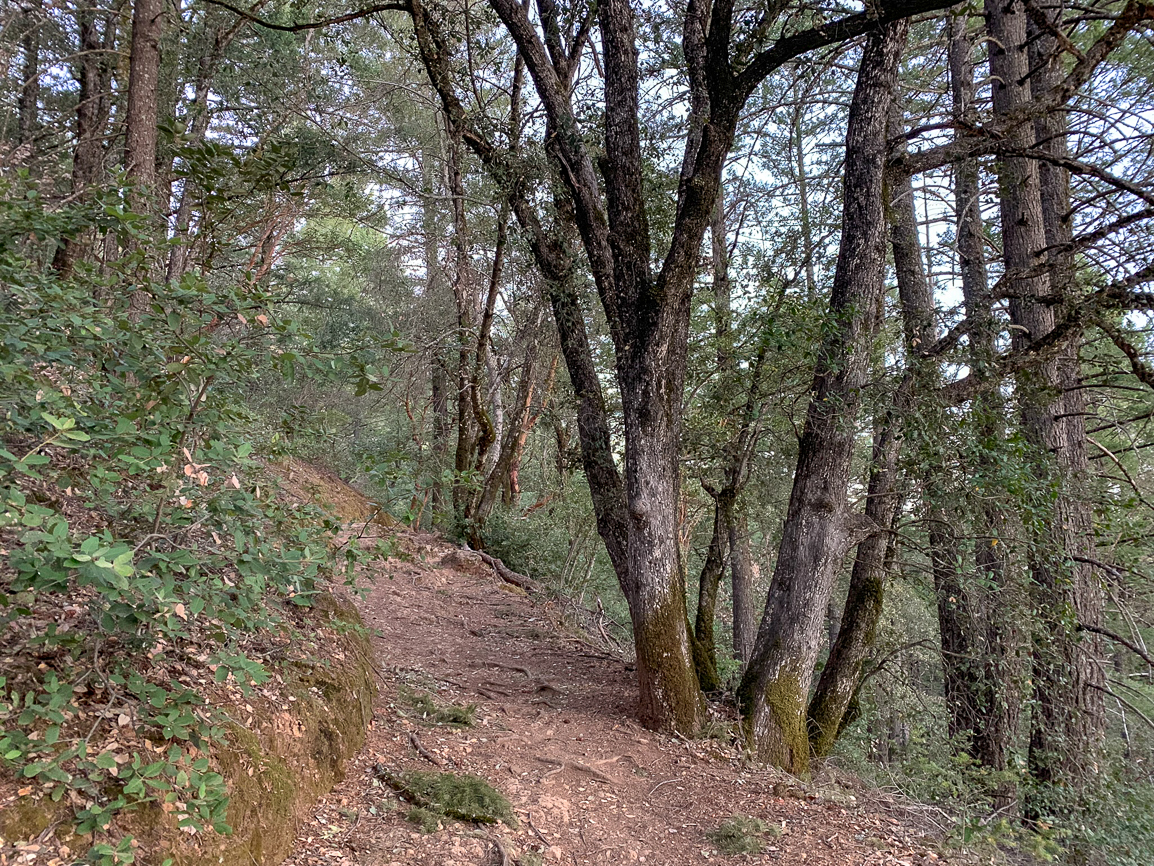 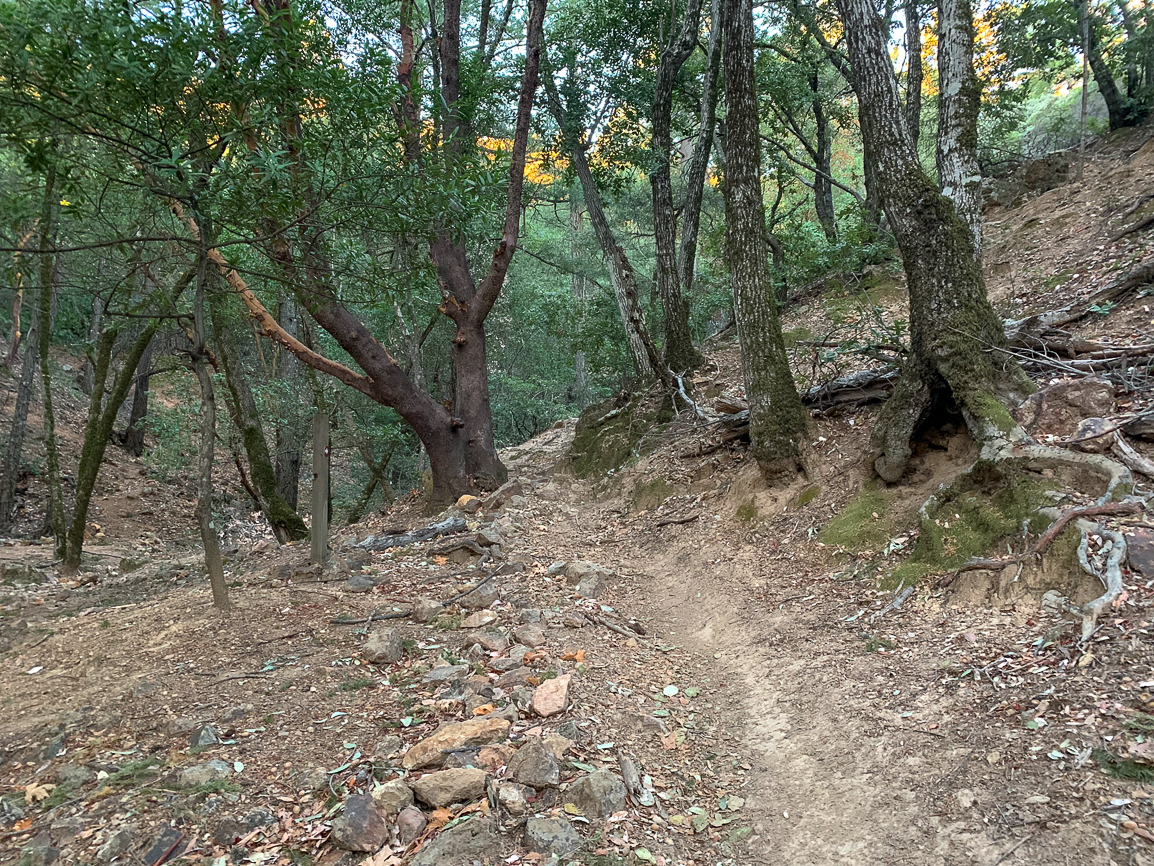 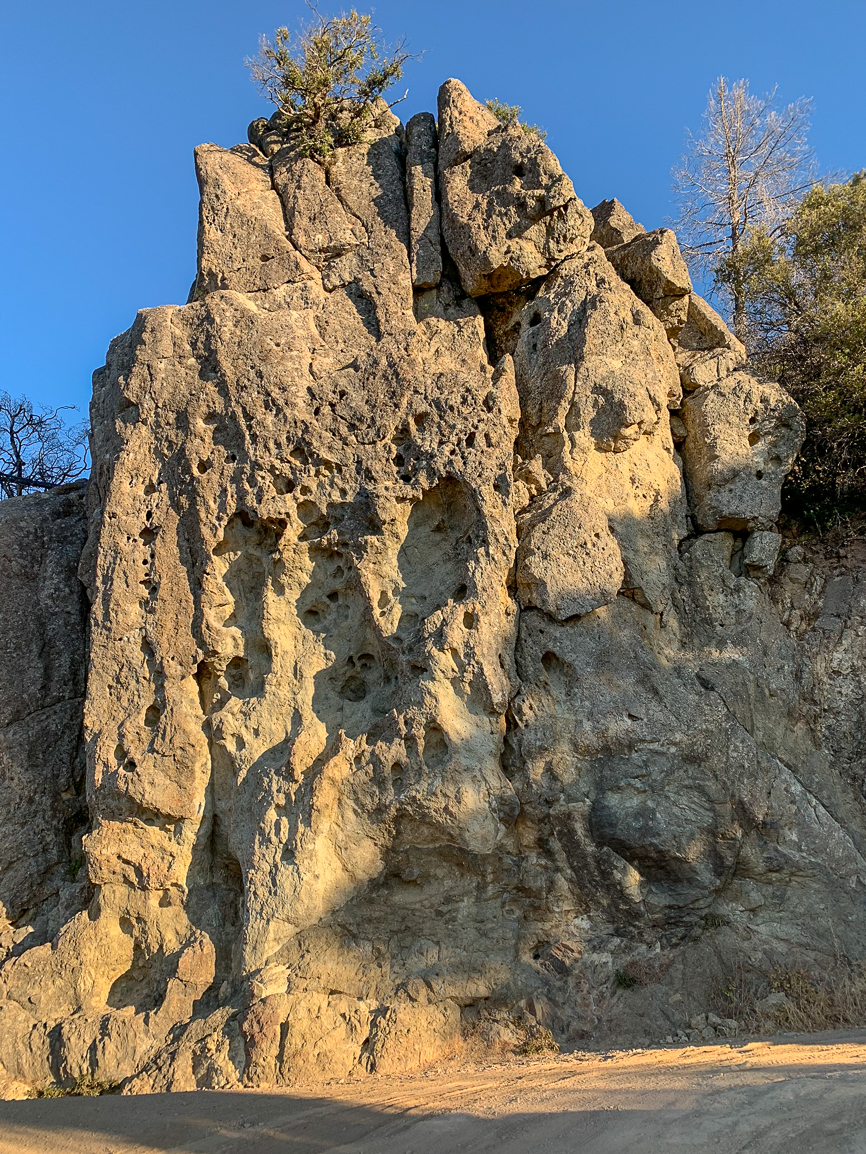 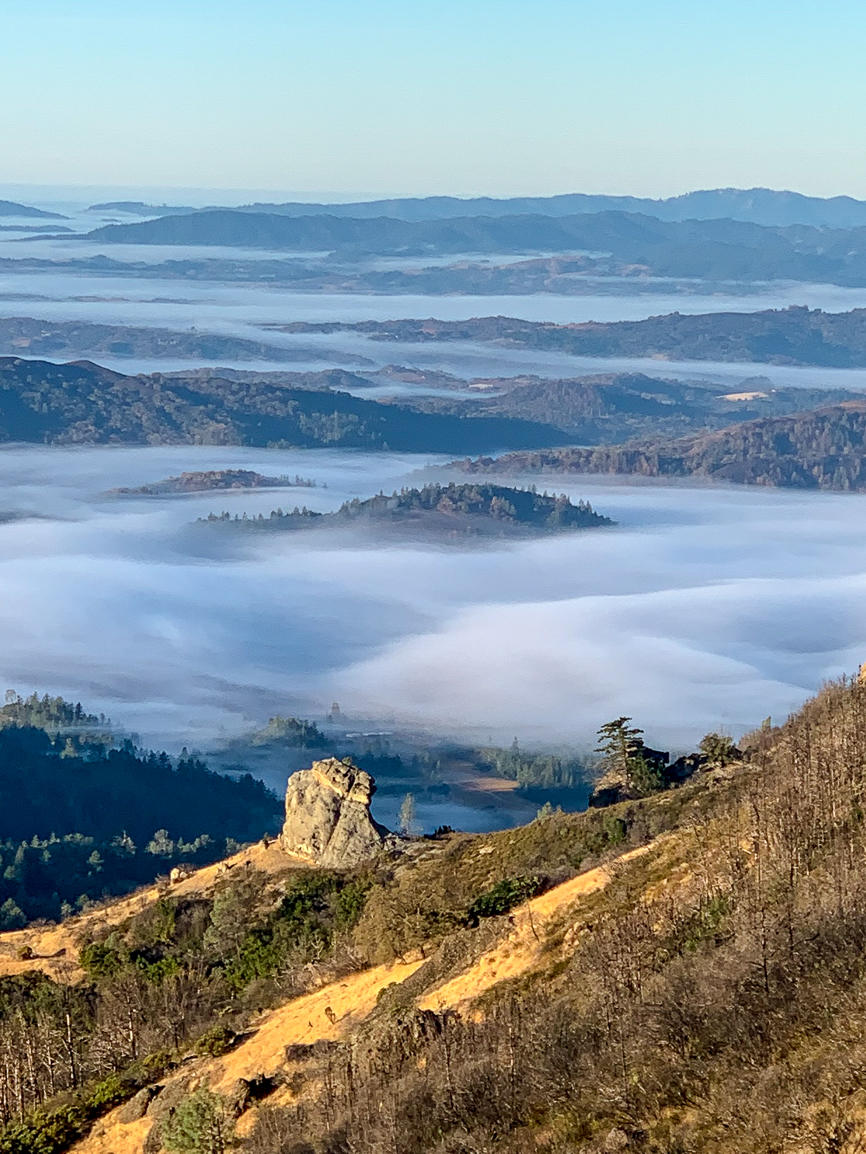 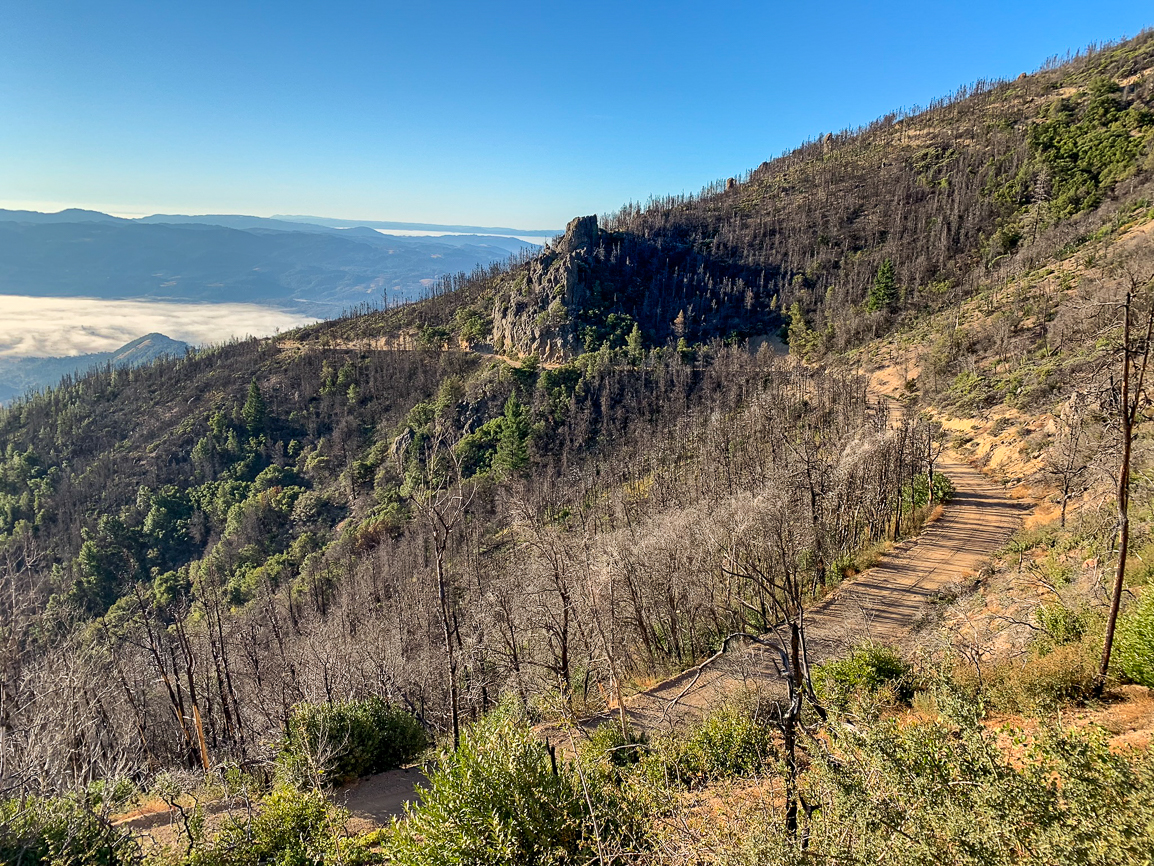 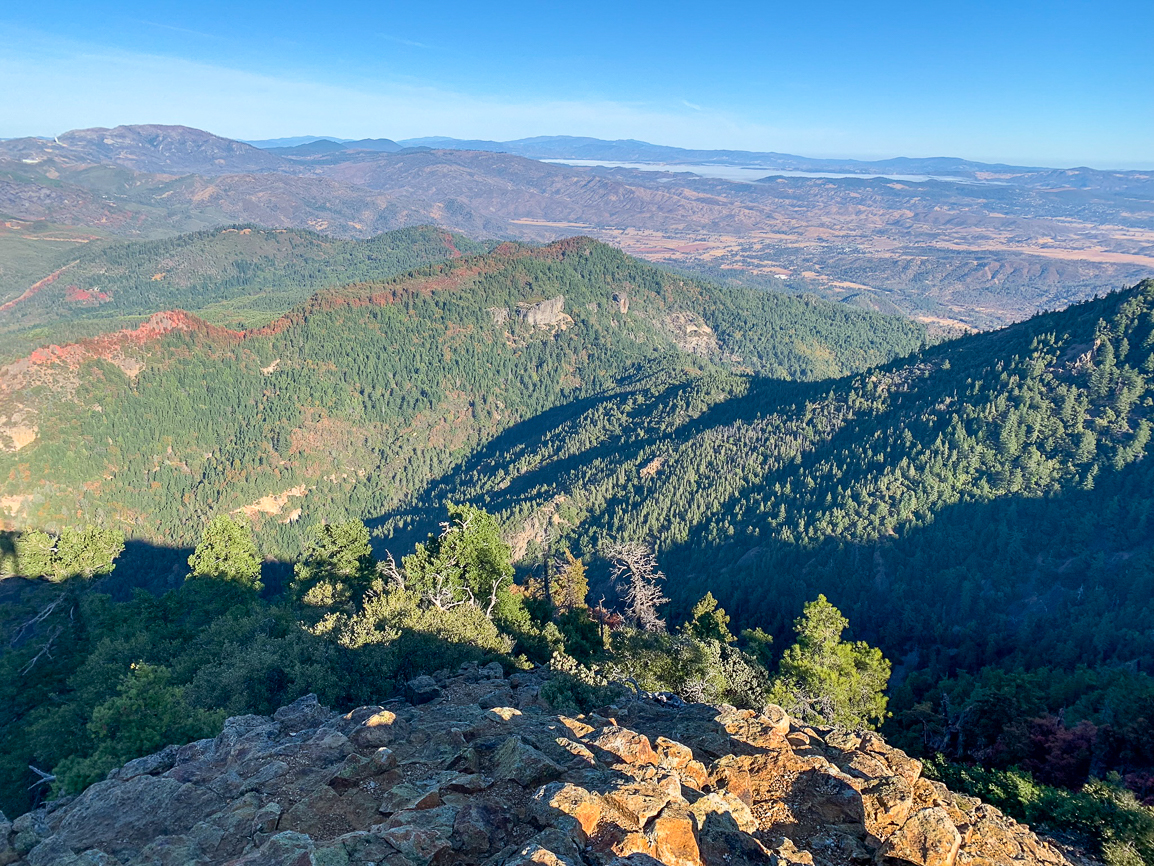 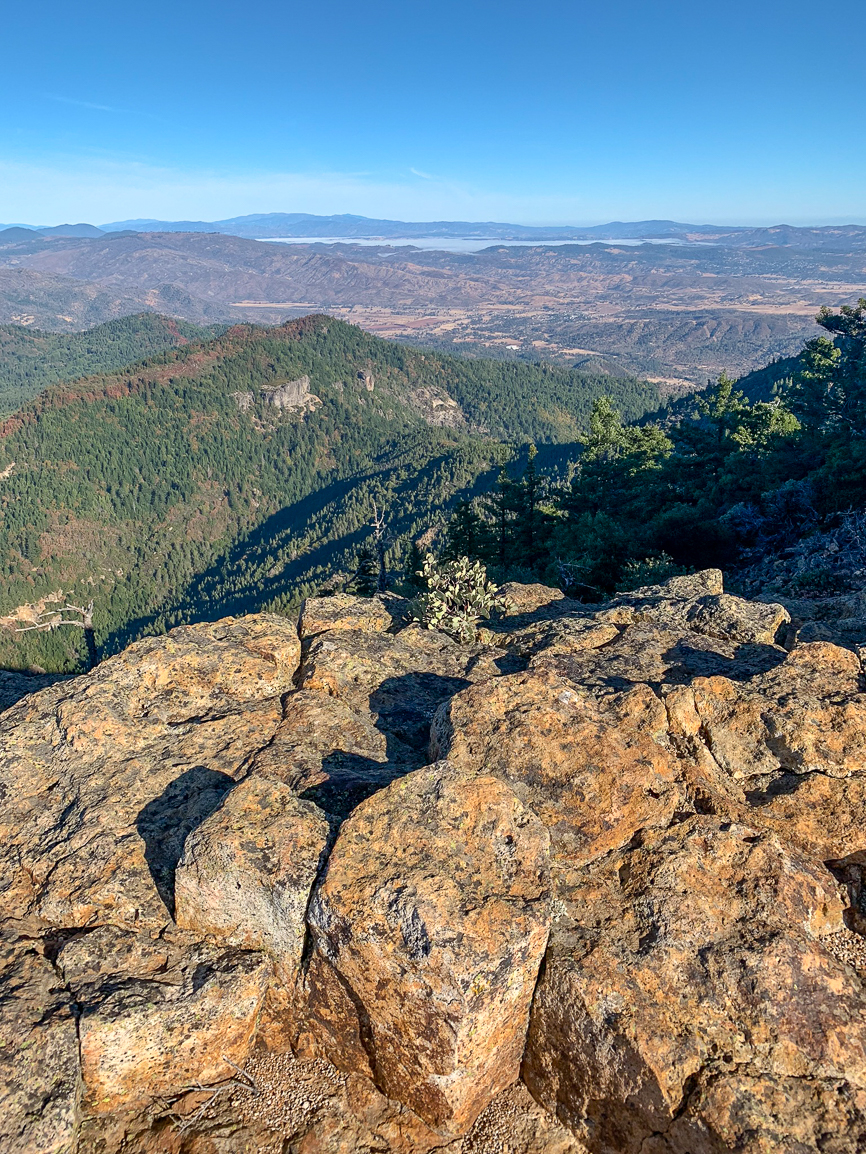 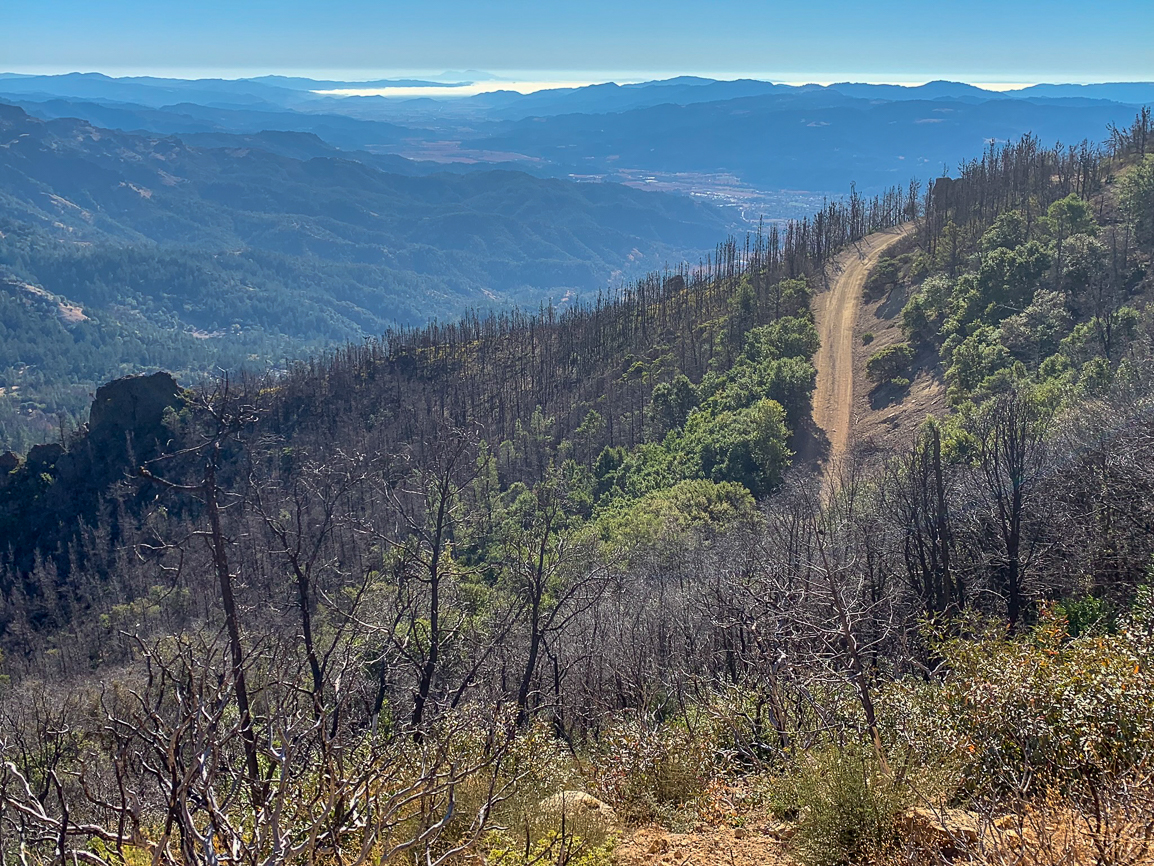 The first 0.9 miles of the hike through a shady forest on a partially rocky single track. The track then merges onto a sunny and exposed fire road for the remaining 4.3 miles to the summit. Although a moderate difficulty, the fire road is long, sunny, and windy, so pack plenty of snacks, water, and sun protection.

From Highway 29 and Highway 128 in Calistoga, drive 8.5 miles north. Just past a Robert L Stevenson Memorial Park sign, park in the pullouts on either side of the road. Pick up the trailhead on the western (left) side of the highway at the Caution sign.