The hike into Little Lakes Valley (sometimes called Rock Creek Valley or Canyon) is a beautiful, surprisingly approachable high-altitude trek filled with towering Sierra Nevada peaks, a series of stunning, picturesque alpine lakes, and lovely fall foliage if you can time it right. This trailhead from Mosquito Flats Campground is your gateway to destinations like Gem Lakes and Treasure Lakes (but not these Treasure Lakes) or longer backpacking routes through Mono Pass or Morgan Pass — or you can also use this for the route described, which is a moderate day hike along a series of lakes in the aptly named Little Lakes Valley — Chickenfoot Lake, Hidden Lakes, Long Lake, Heart Lake, Box Lake, Marsh Lake, and Mack Lake. Although this route as described heads to Chickenfoot, any one of those lakes is a worthwhile destination. 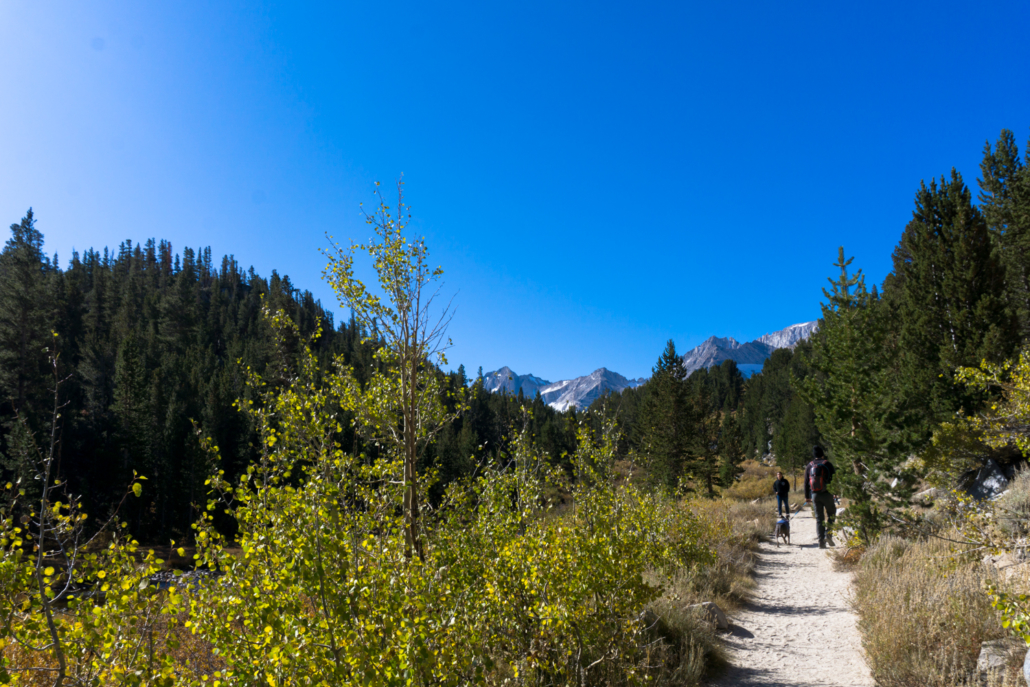 The trail begins at Mosquito Flats past Rock Creek Lake, which can fill up fairly quickly on weekends and during foliage season, so you’ll want to get here early. Bear canisters are provided for anyone with food or scented items in their cars — and remember to err on the side of caution here.

The hike kicks off on a wide, sandy path that roughly parallels the creek you’ve been driving along on your way up to the trailhead. Low-growing groves of aspen provide some fall color (and sound), while taller pines frame the epic view of the mountains you’ll be facing for most of your route — most prominently Bear Creek Spire, Mount Date, Mount Abbot, and Mount Mills.

It’s gentle going for the first 0.3 mile with only a slight incline, but after that you’ll reach a short but noticeably steeper section of iconic Sierra granite steps. 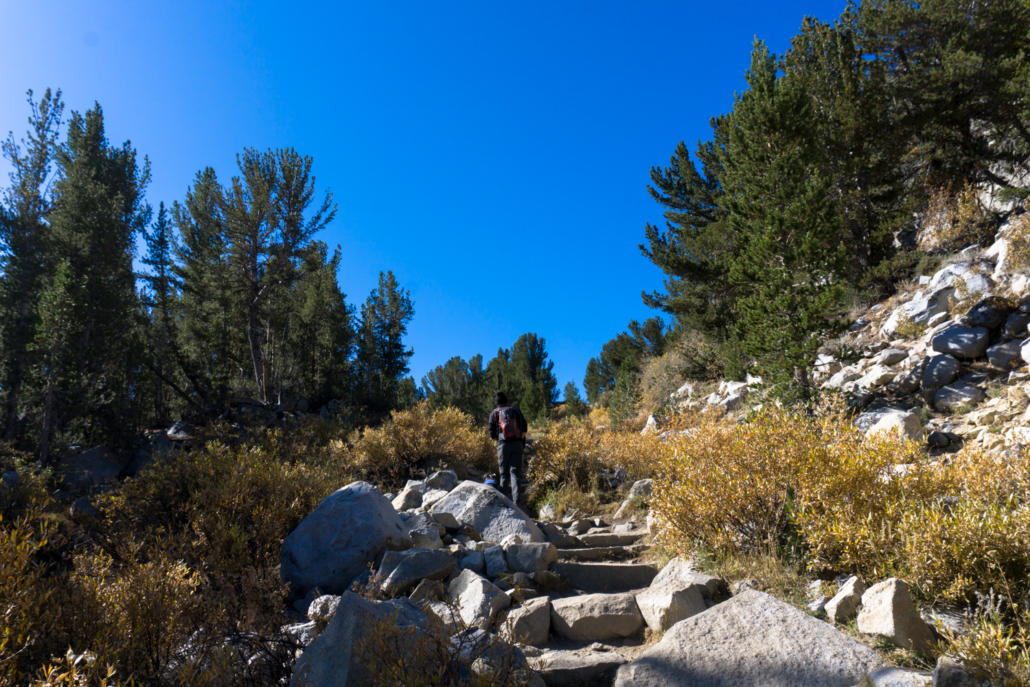 By the 0.5 mile mark, you’ll have mostly crested this steep section, revealing the first of the impressive lake views you’ll have on this route at Mack Lake. Mount Morgan forms the large, darker-colored mass on the left. 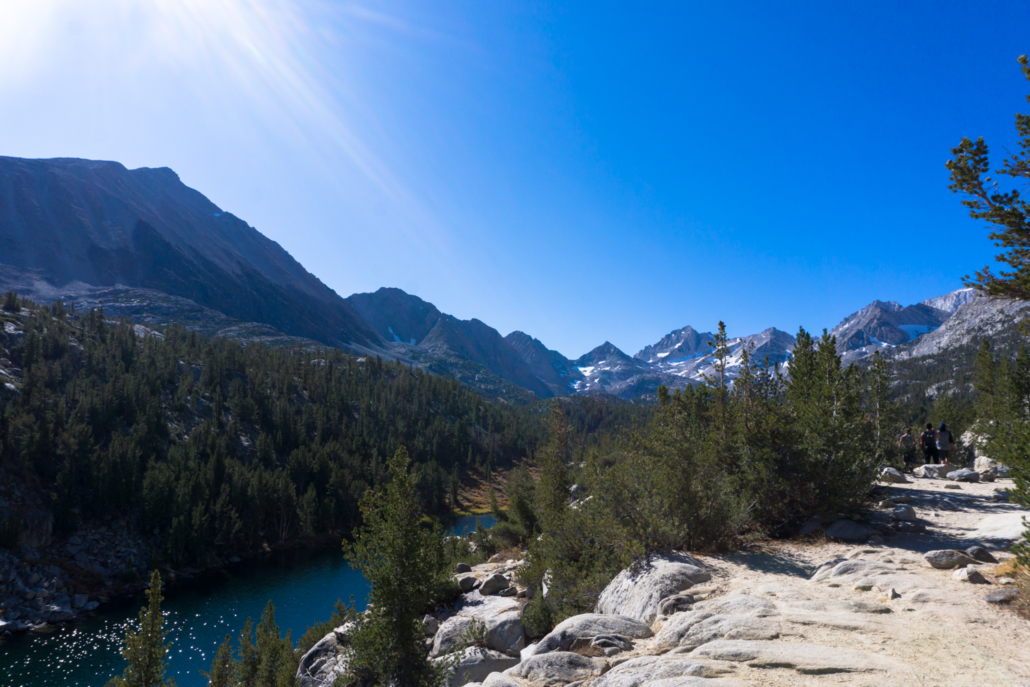 Around this point, you’ll also encounter a junction with a trail leading to Ruby Lake and Mono Pass. You’ll keep heading straight toward Morgan Pass. If the trail you’re on starts gaining a lot of elevation and rising above the valley, you’ve taken a wrong turn!

Continue heading straight to hike along the west side of Mack Lake. After a few ups and downs you’ll hike alongside Marsh Lake (there’s a use trail that wraps around the eastern shore if you’re inclined to explore a bit or escape any crowds on the main trail) and occasionally hop across creeks full of Sierra snowmelt. 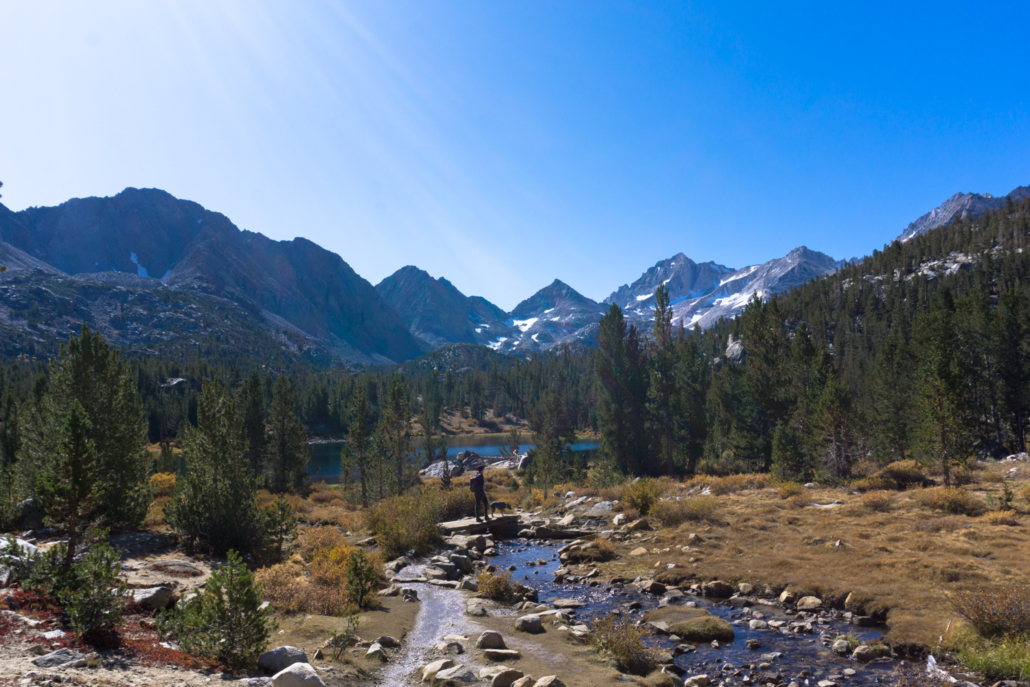 Just beyond Marsh Lake, the trail hugs fairly close to the side of Heart Lake — which also provides another lovely place to stop to hang out and soak in the scenery if you’re so inclined. 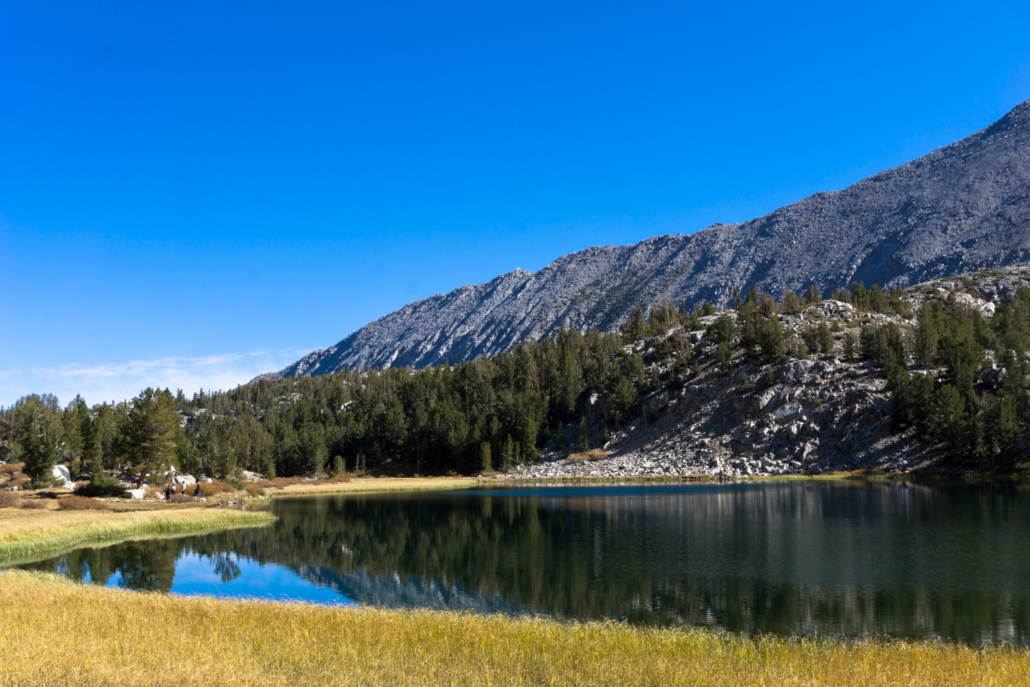 After Heart Lake, the trail picks up a bit of elevation again — and takes a short break from the lakeside views, too. At about the 1.4 mile mark, you’ll have a short climb up as you continue south near Box Lake, then fall back down to the bottom of the valley and hike along Rock Creek before hitting the shore of Long Lake just before 2.1 miles. 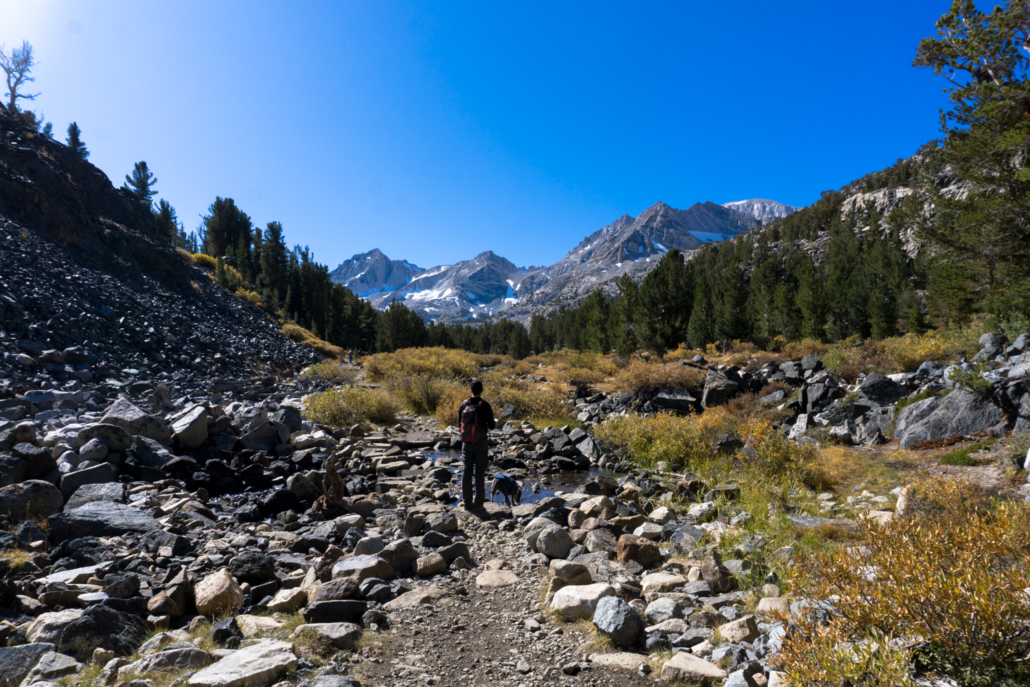 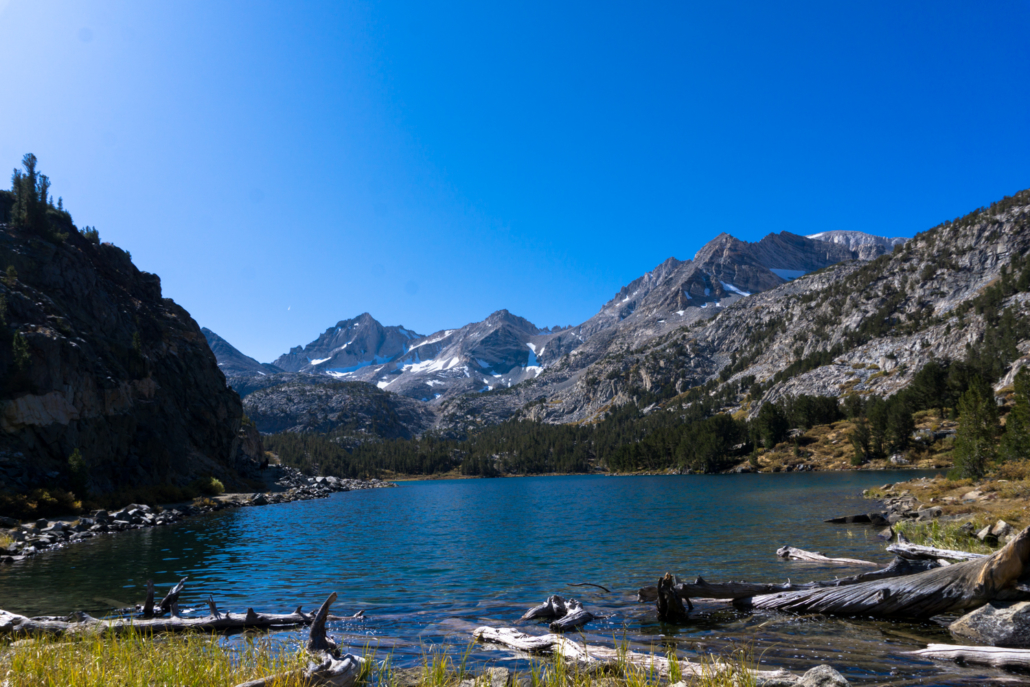 For my money, this is one of the best if not the best view on the entire trek. Standing at the northern edge of this clear and placid alpine lake, you’ll be staring directly at a series of towering Sierra peaks at the southern end of the valley. For as similar as much of the landscape appears here in the Sierra Nevada — crystalline lakes, gray granite peaks laced with lighter volcanic intrusions, postcard-perfect blue skies — it’s somehow impossible to not be stunned whenever you really stop to soak it in.

When you’re done enjoying this panorama, continue south as the trail hugs the edge of Long Lake.

You’ve had it relatively easy so far in terms of elevation gain. Despite the entirety of this route hovering above 10,200 feet, you’ve climbed less than 300 feet so far in the 2.4 miles you’ve traveled. At this point, though, you’re going to climb about 200 more feet in about a half mile. All in all, it’s still a mild elevation gain, but this is the steepest section you’ll encounter and there aren’t really any breaks along the way. Remember you’re still up pretty high, so take it easy and stop for breaks and snacks if you need them.

Just past the 2.7 mile mark, keep left at the junction to head toward Chickenfoot Lake. These trails are less traveled and can be easy to lose, but in general you’ll just want to be heading east. There’s an unofficial but well-worn path at the 3 mile mark that will take you toward Mount Morgan across a lovely little meadow to the lower end of Chickenfoot. 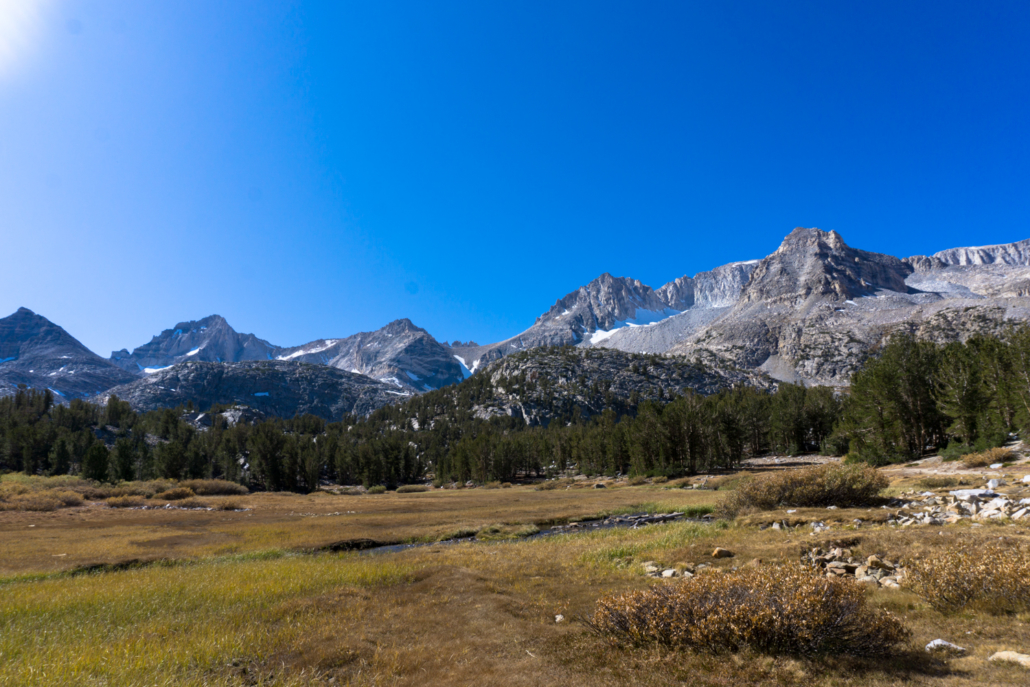 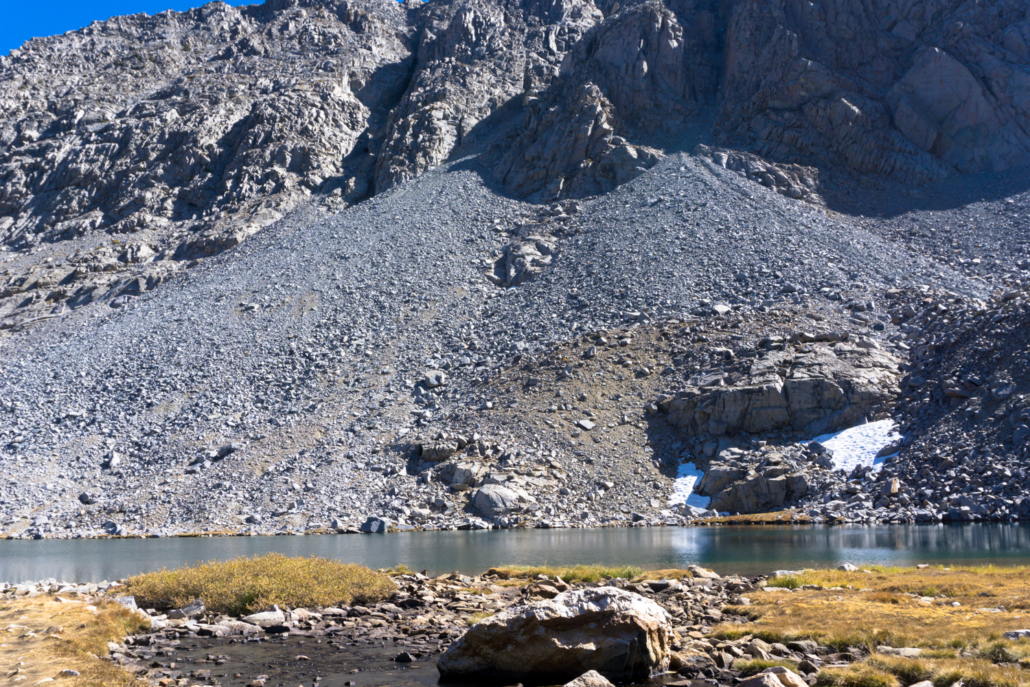 Chickenfoot Lake (at 10,789 feet) is the end of this route as described, but if you are so inclined you are within spitting distance of the Gem Lakes to the south, which can be reached on established trails before Morgan Pass. Enjoy your time here eating lunch, relaxing, or fishing in the lake — continue on to Gem Lakes or nearby Treasure Lakes if you’re inclined and have the time, or just head back the way you came. 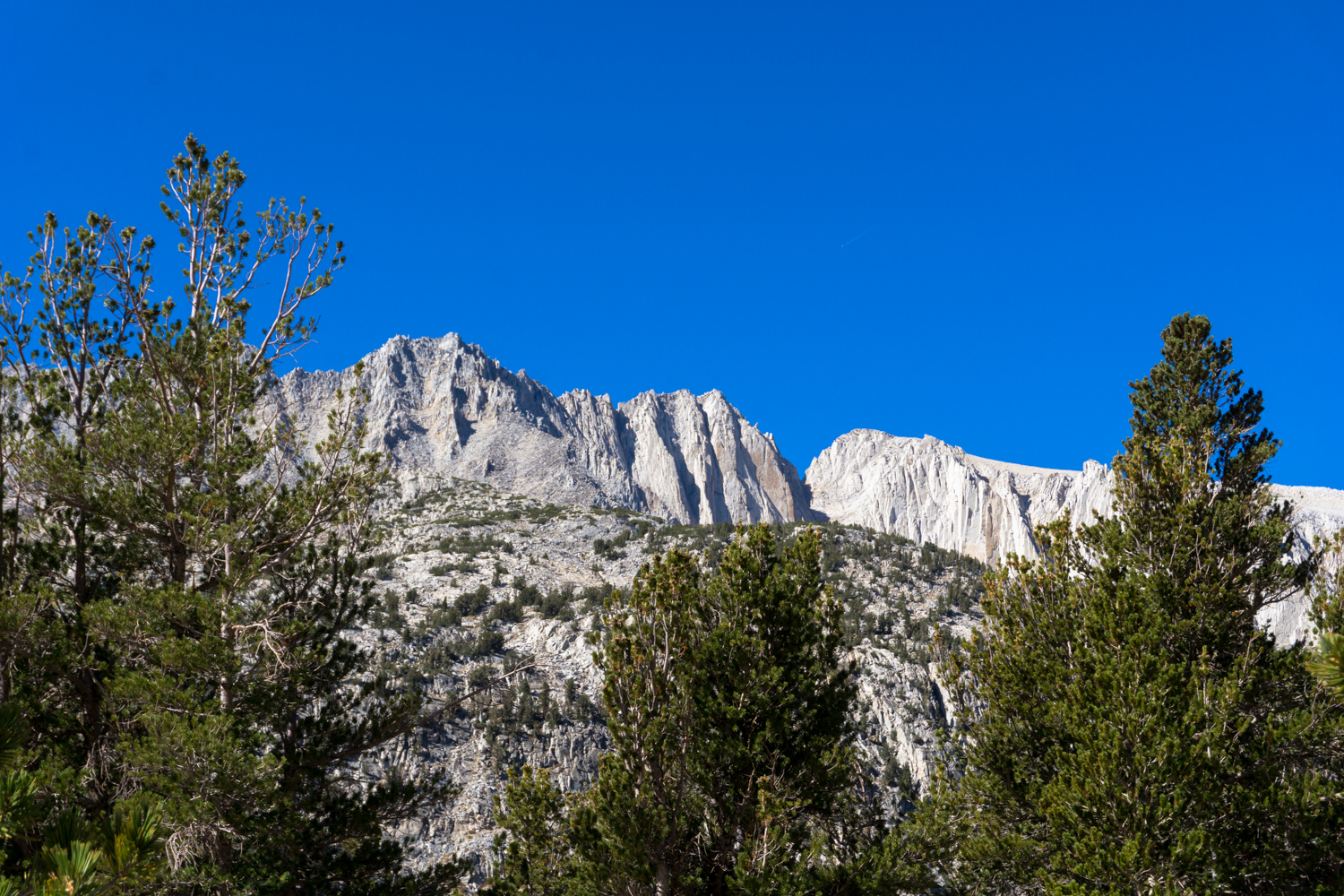 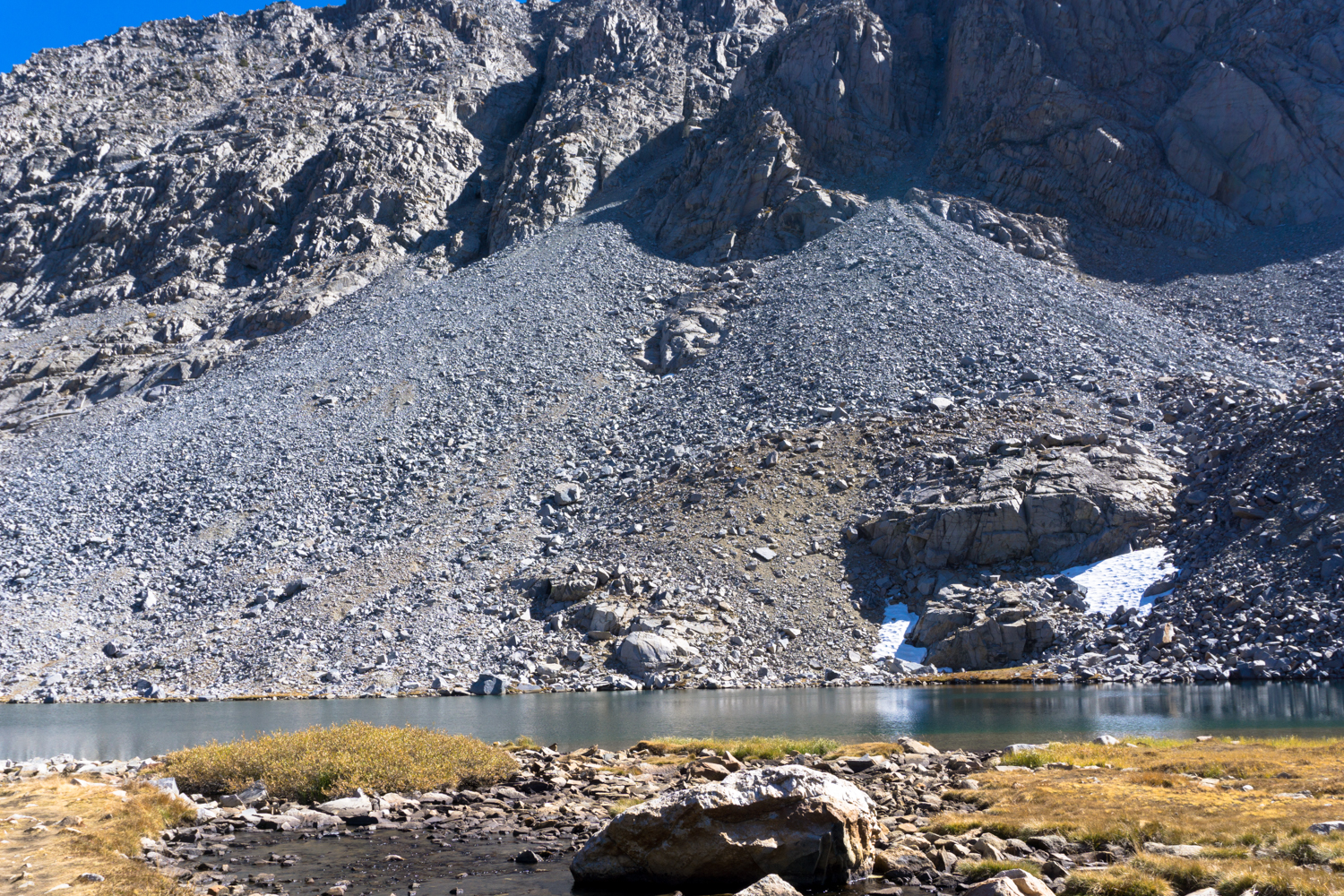 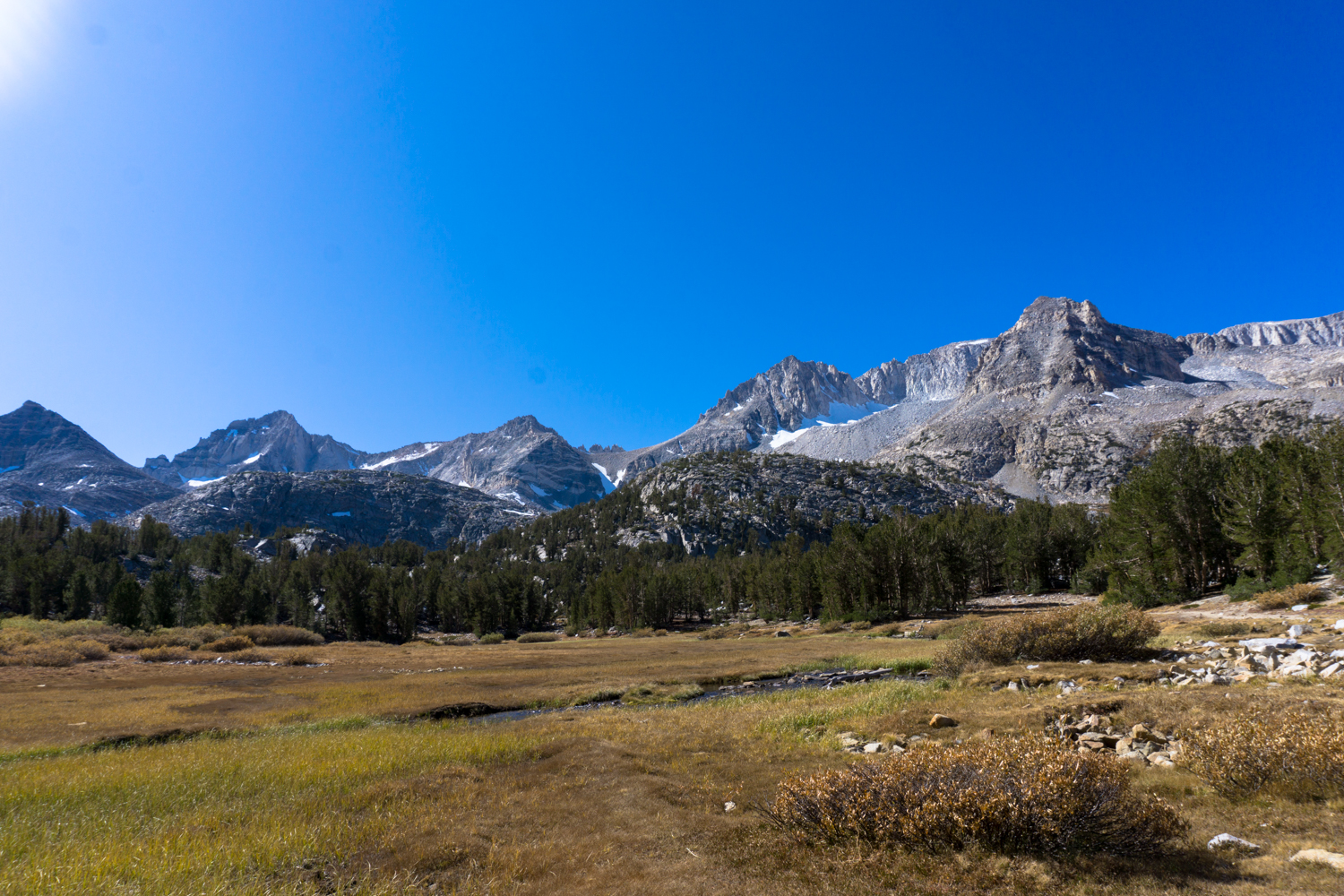 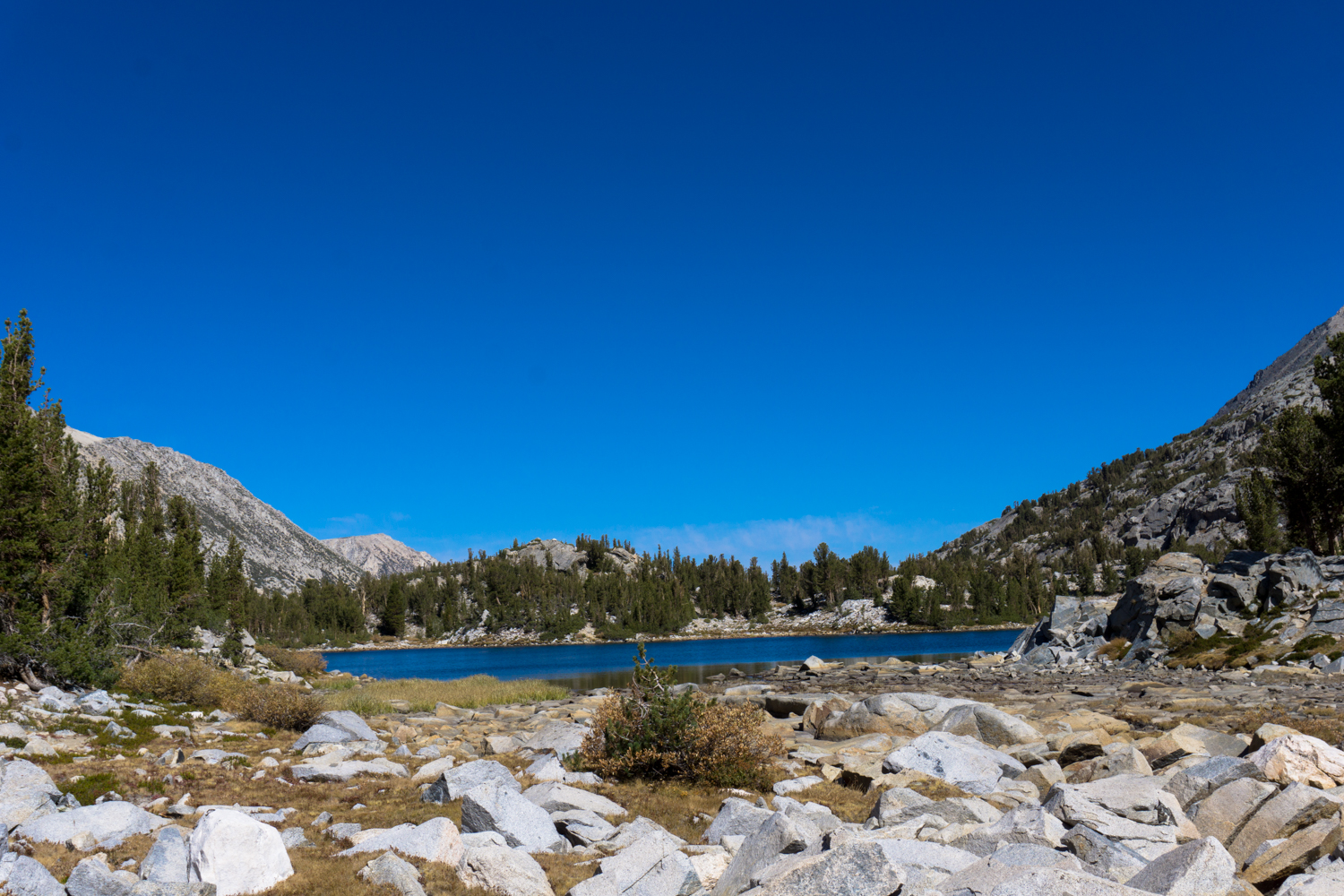 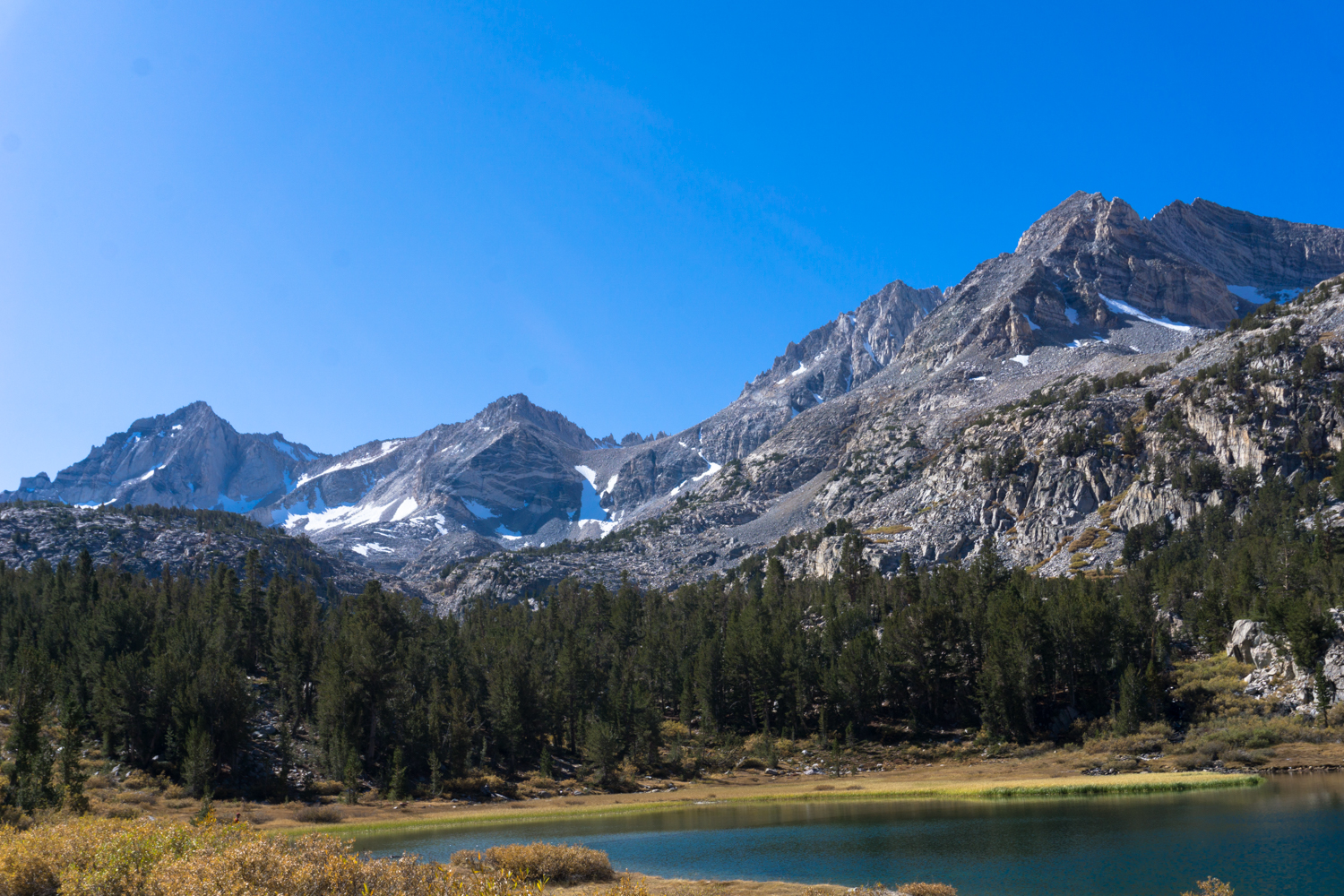 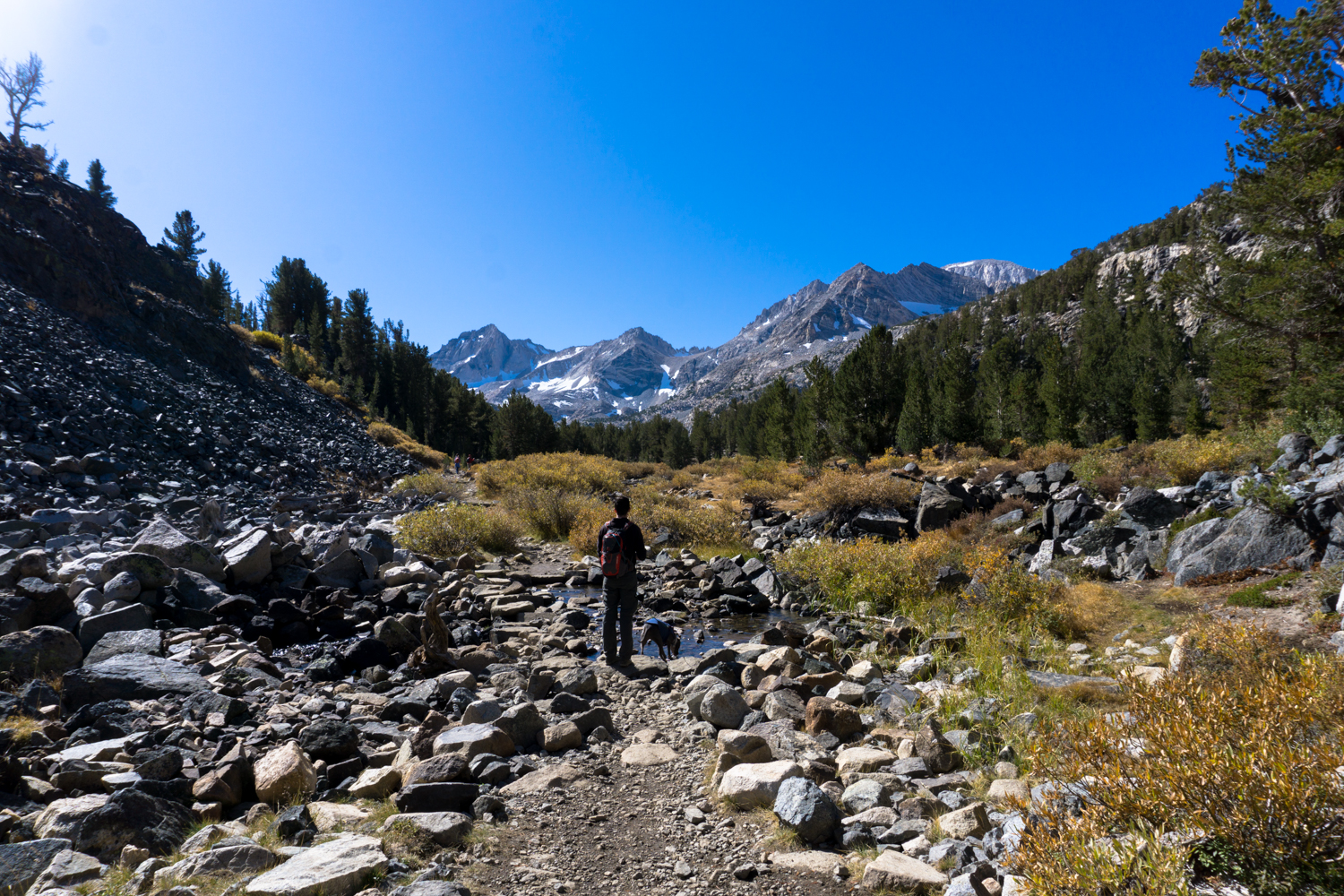 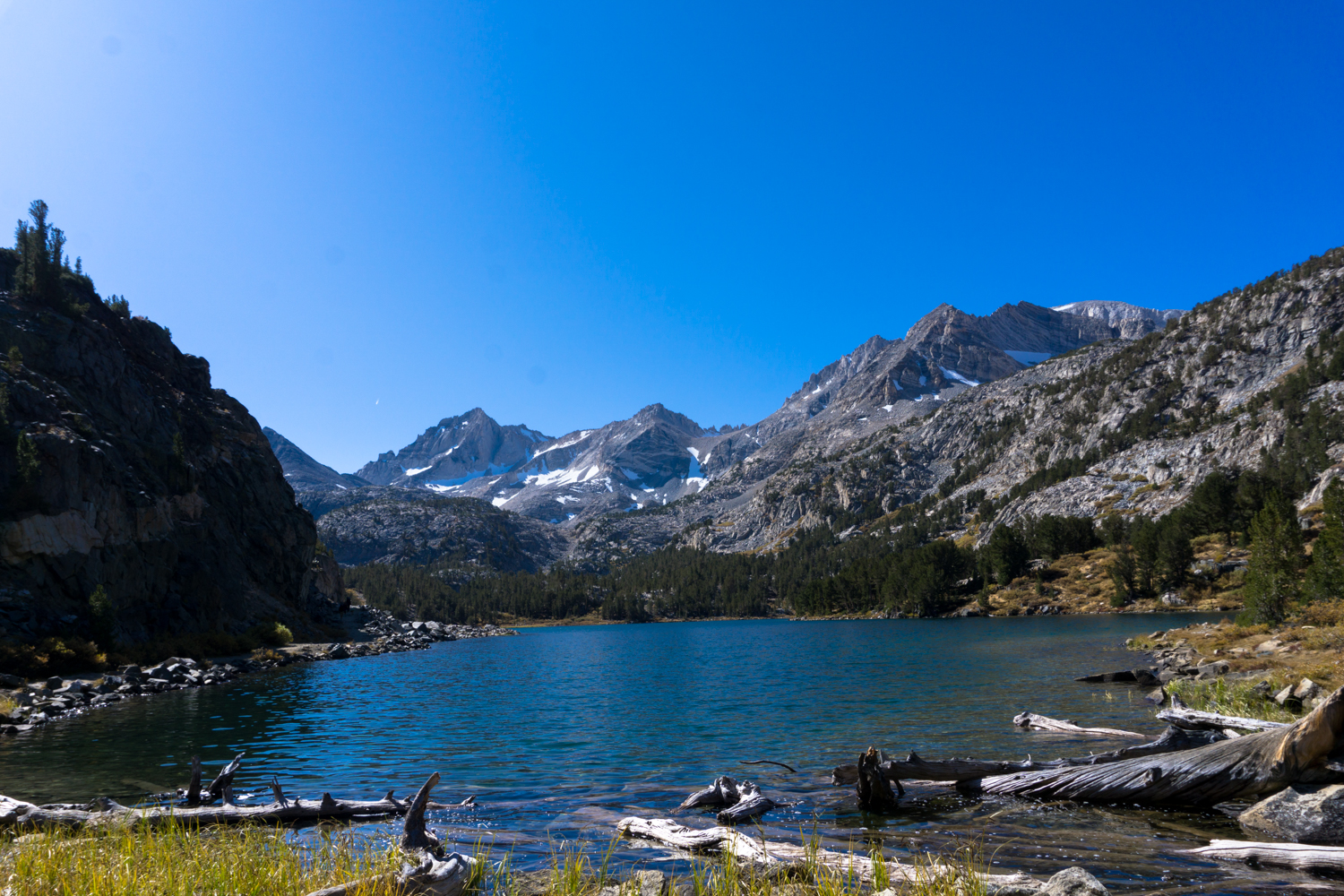 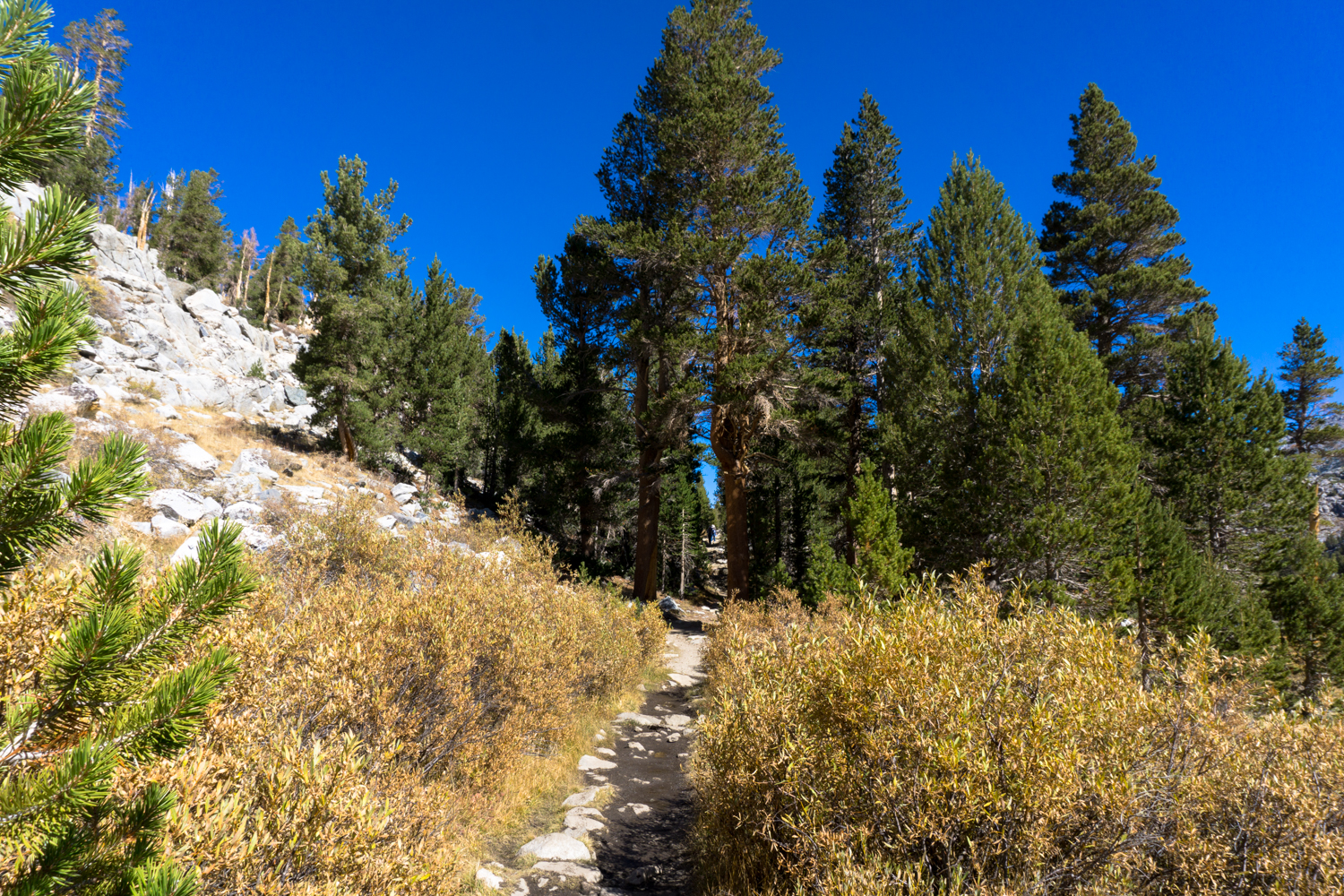 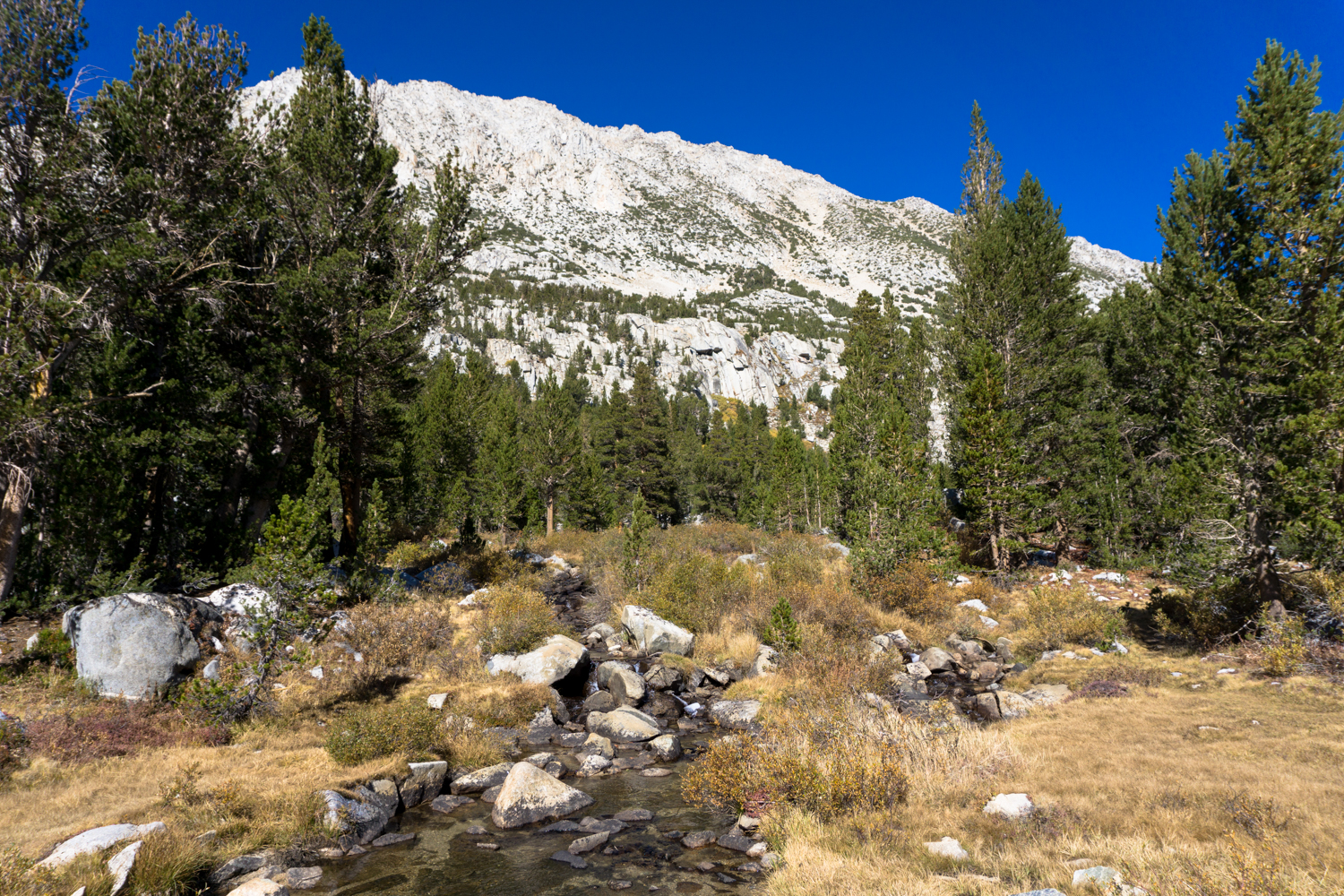 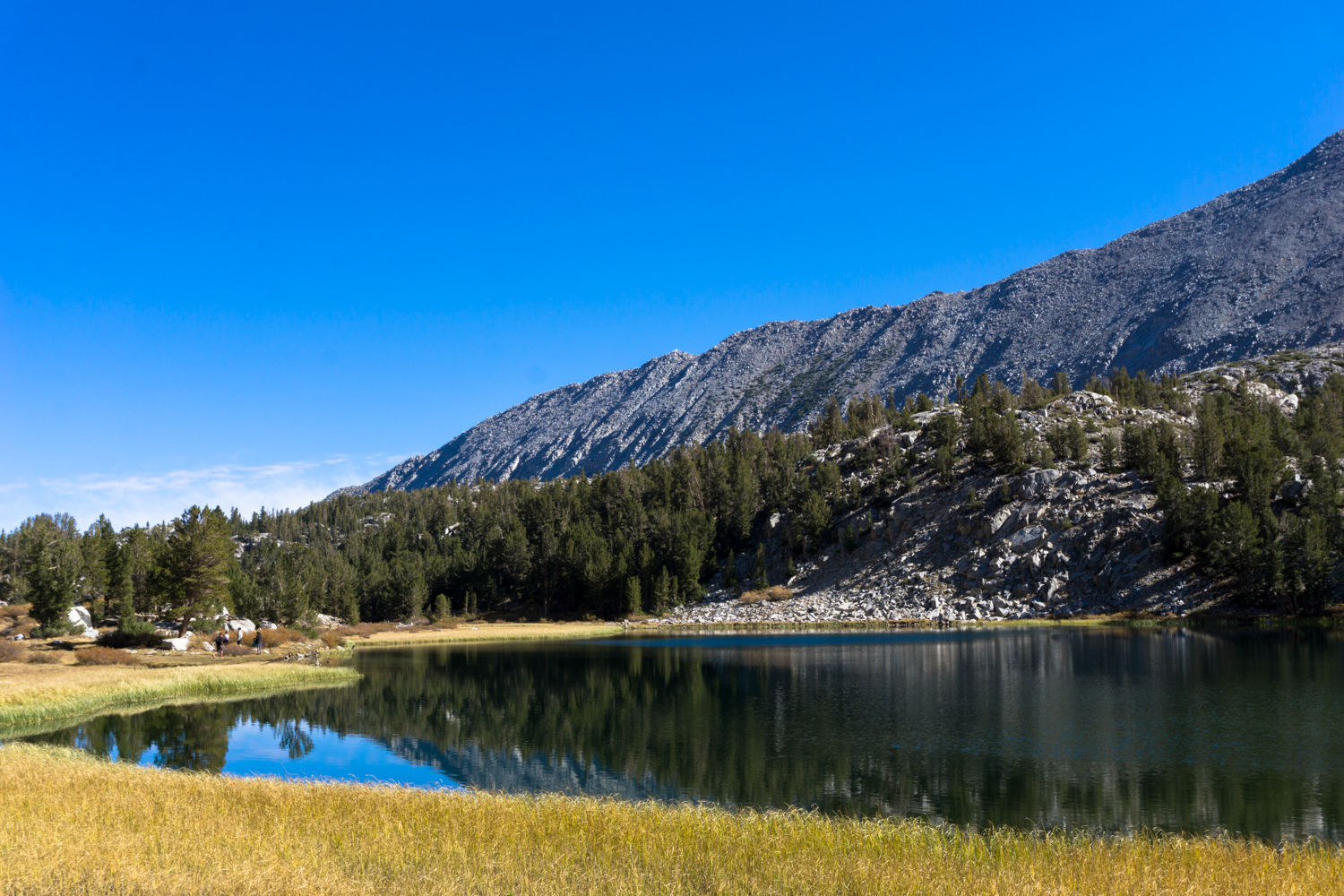 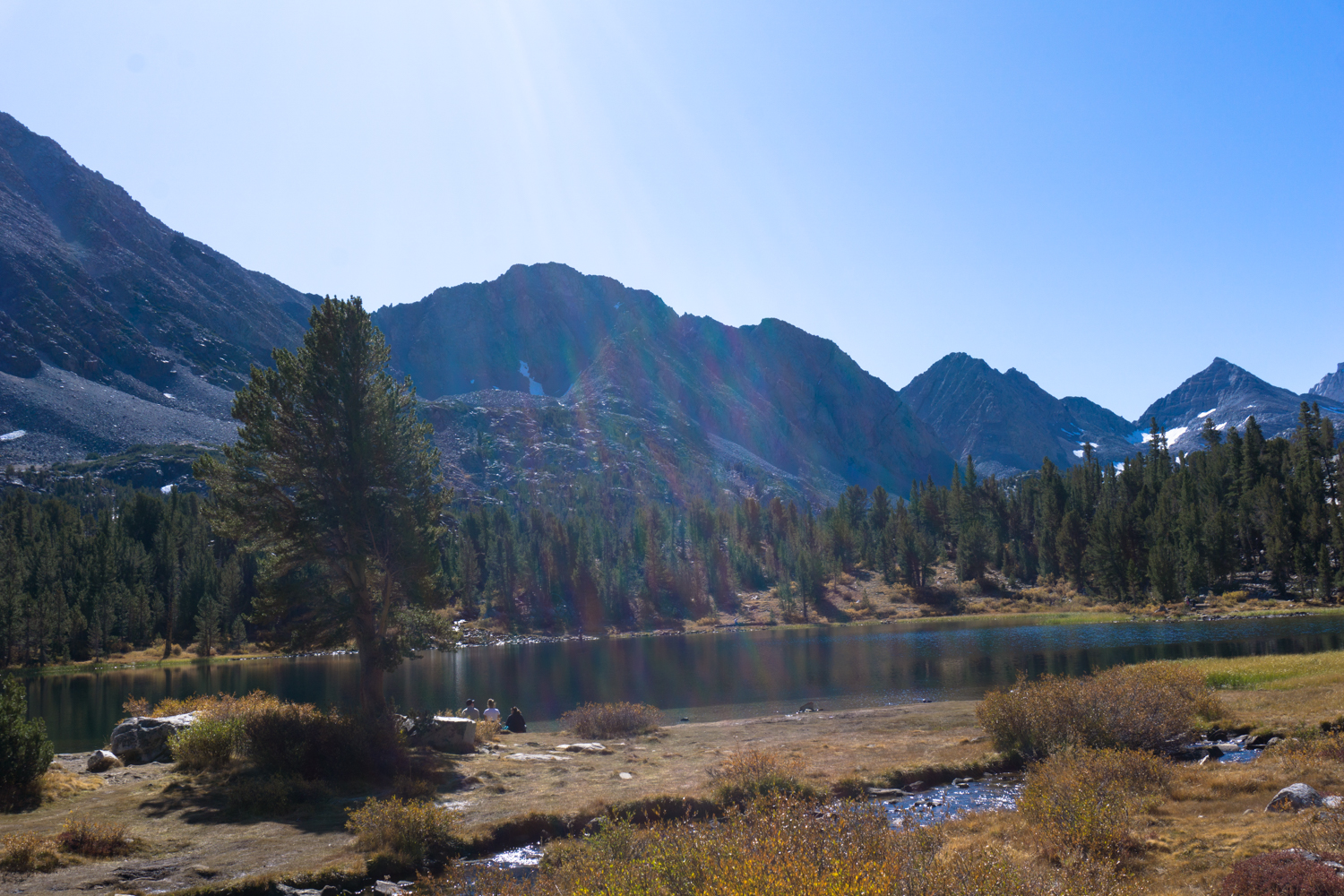 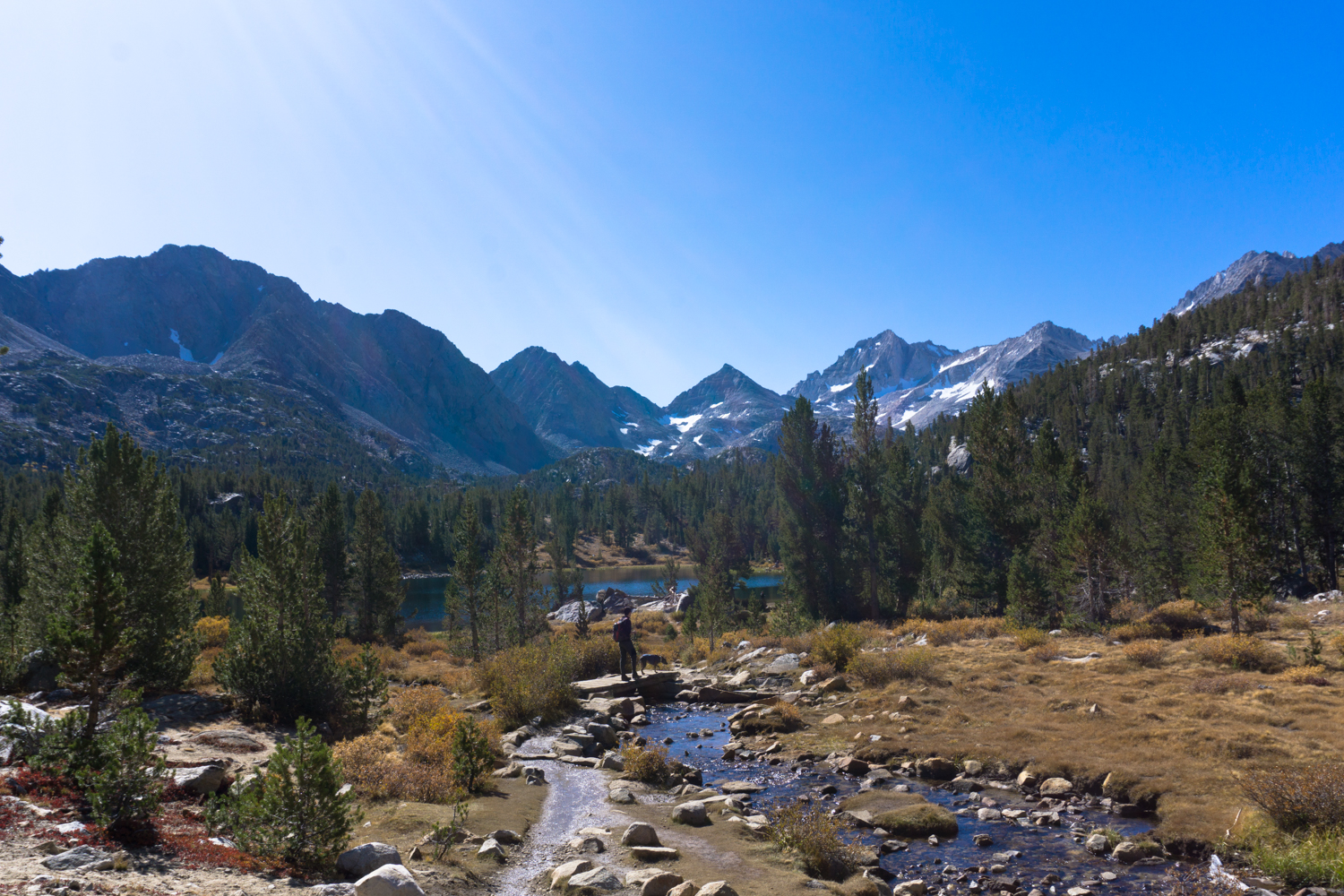 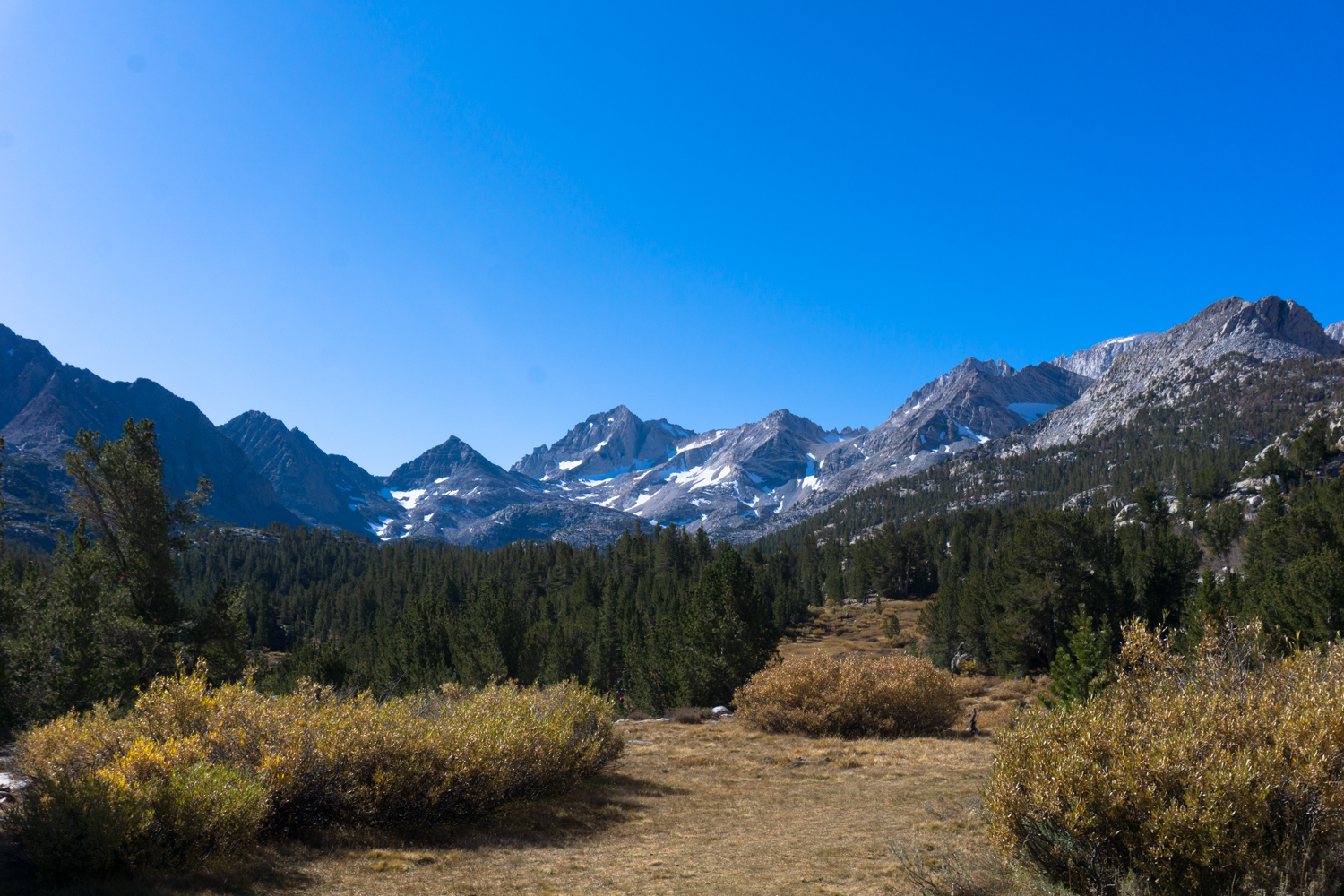 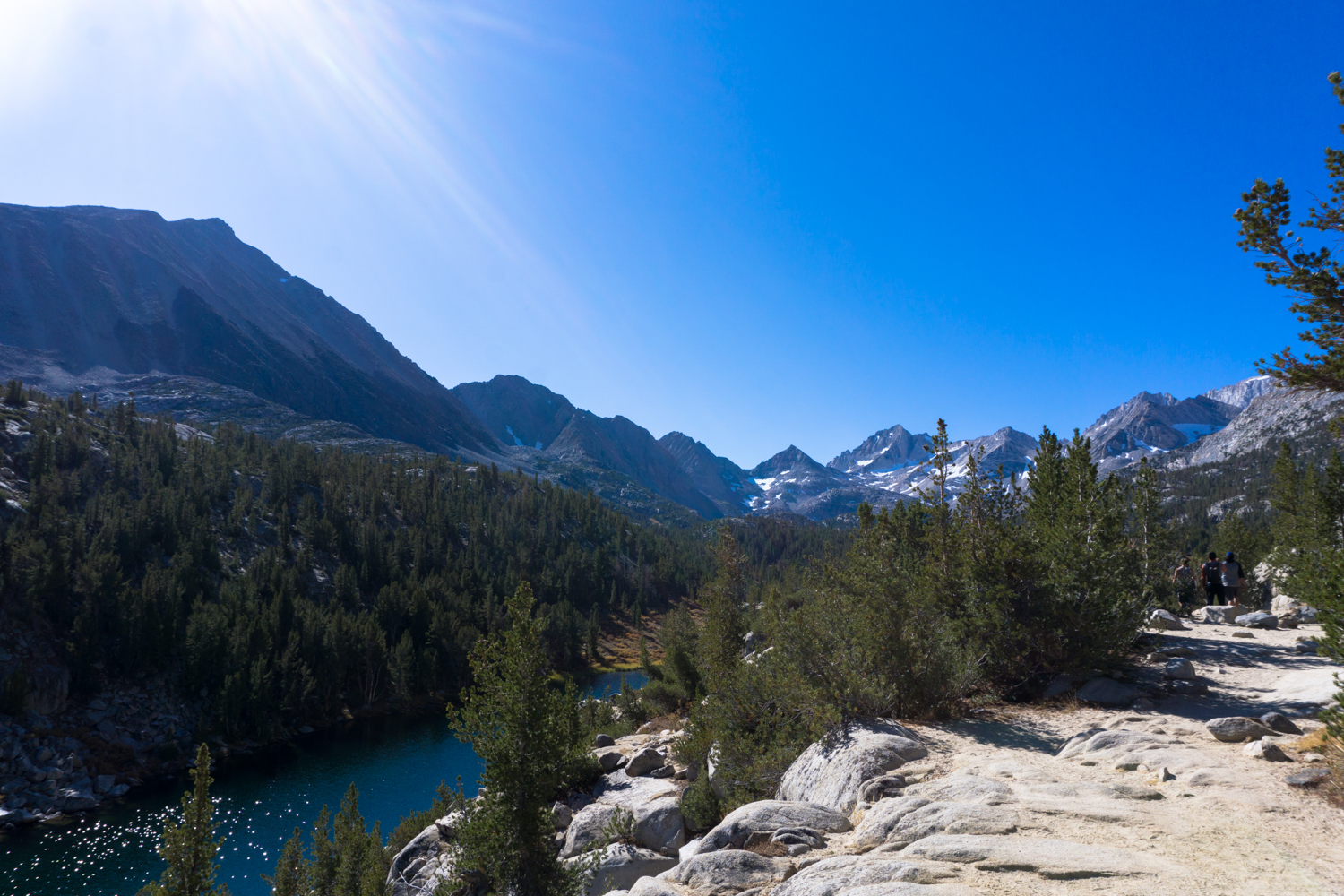 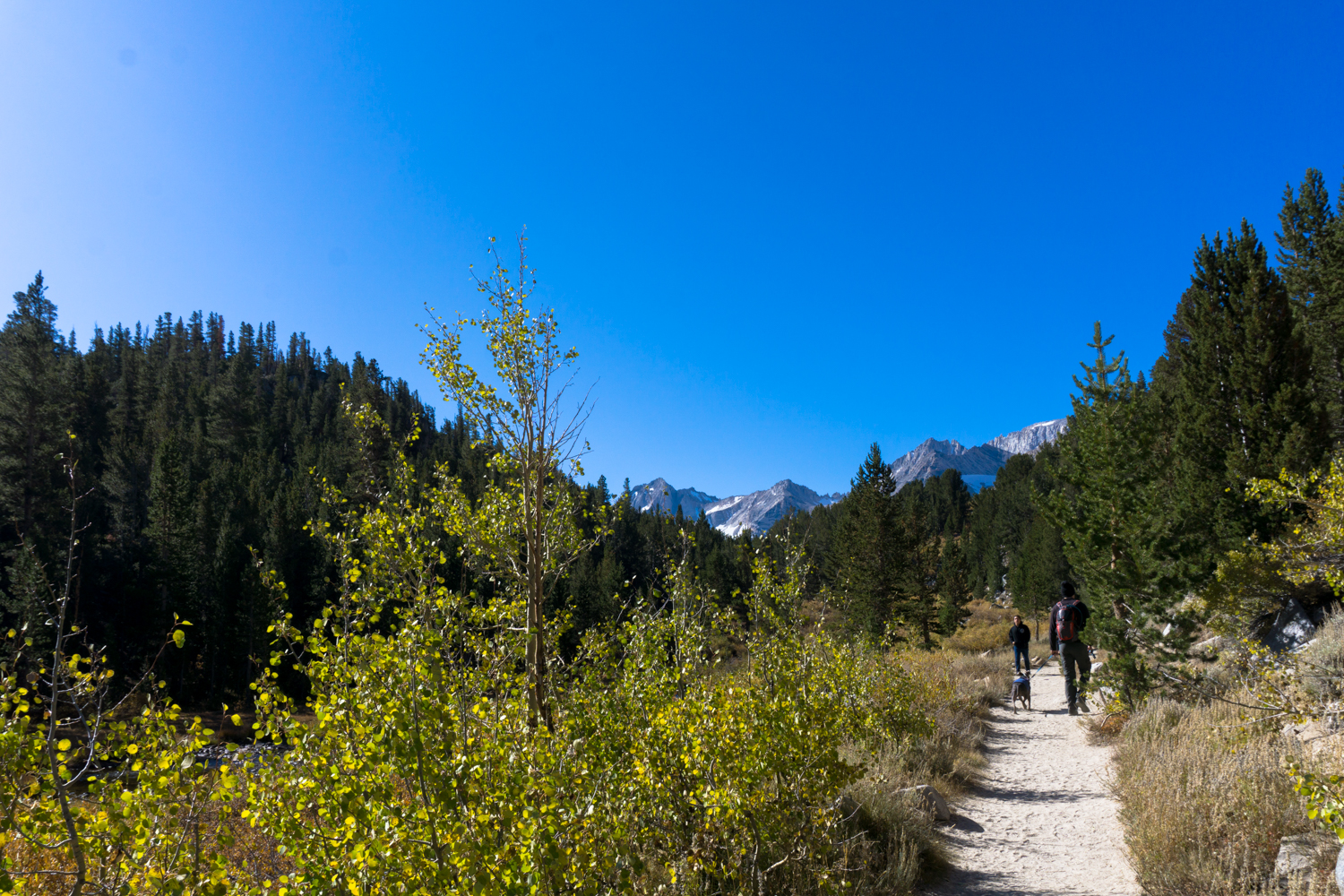 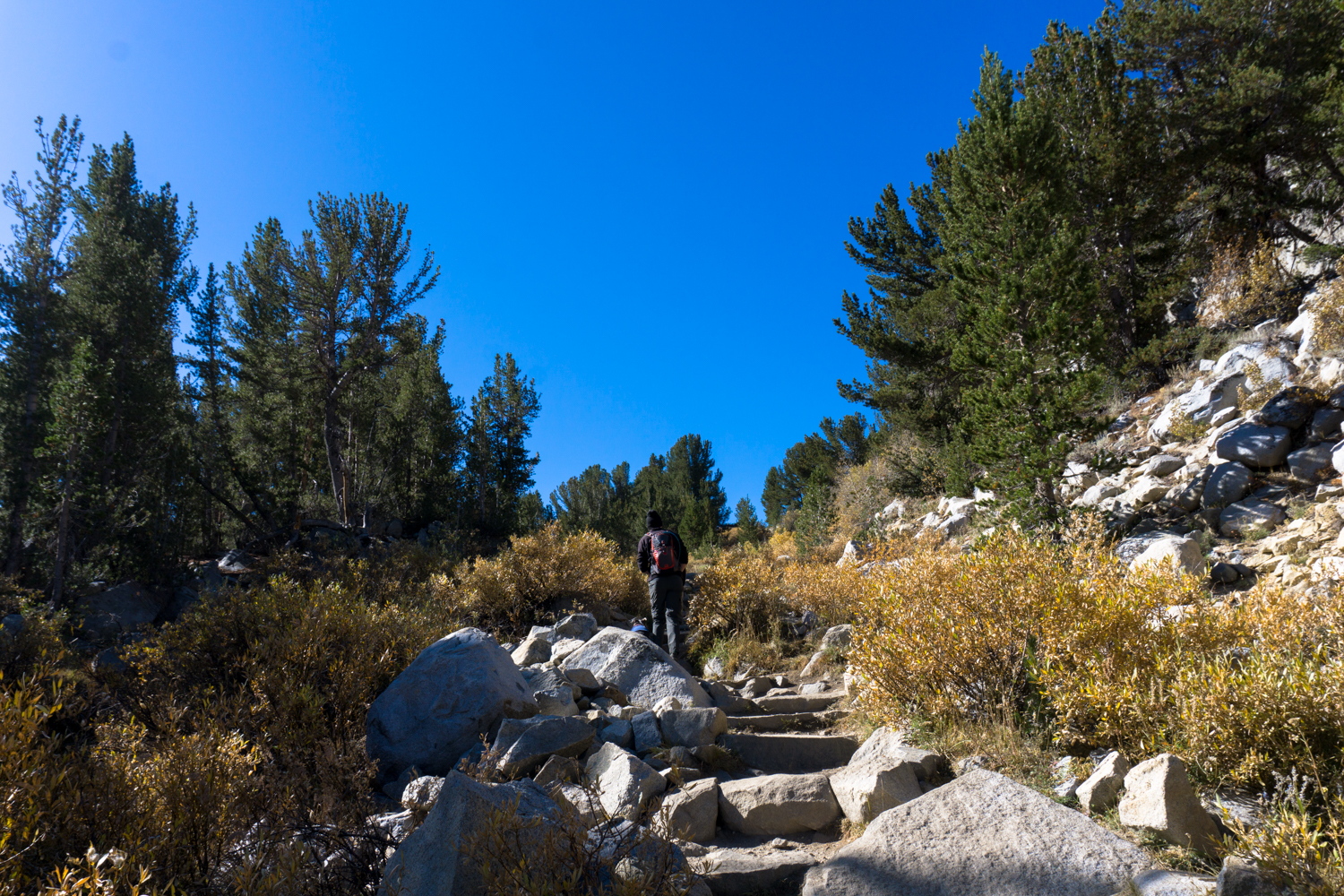 Most of the route is well-established and well-traveled. There are use trails to some of the lakes that may be misleading, but this route is fairly clear.

There are several established private and Forest Service campgrounds along Rock Creek Road. Most of the higher elevation camps are seasonal, so be sure to check to make sure they're still open (they generally close in Sept or Oct depending on weather). You may also camp in the John Muir Wilderness with a permit.

The trailhead is at the Mosquito Flats Walk-In Campground all the way at the end of Rock Creek Road, about 10.5 miles from Tom's Place off US-395. Road may be partially closed during the winter. The trailhead is popular -- there is a small spillover lot located nearby if the trailhead is full.