A moderate 9.5 mile hike to North Dome – a granite promontory with commanding views of Half Dome, Cloud’s Rest and the Yosemite Valley below. This meandering trail on the north rim of the valley is usually not crowded, providing a nice break from the throngs in the valley. The trail is mostly shaded, but it’s also mostly uphill on the return trip – so conserve some energy. A short side trip to Indian Rock will get you up close to Yosemite’s only natural arch formation. A highly-recommended hike.

Most people would agree that Half Dome is probably the main attraction in Yosemite – it’s an immensely popular trail to a impressive monolith visible from just about every corner of the park. But the main trail to the summit is almost always jam packed, and even some of the more easily-reachable viewpoints can often feel more like Disneyland than a National Park. However, if you’re looking for a fantastic view of Half Dome and Cloud’s Rest without having to deal with the crowds, the trail to North Dome should definitely be on your radar.

The trailhead is in the northern section of the park, past Porcupine Flat on Tioga Pass Road (which is closed during the winter and sometimes in inclement weather, too), and is one of those “backward” trails where the ascent is done on the way out. Look for a small parking area on the south side of Tioga, marked by a trailhead sign and some outhouses. 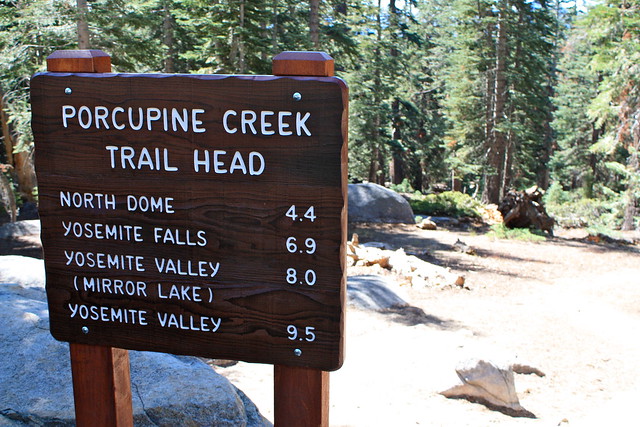 The first 0.2 miles are on an old paved road that looks like it’s currently in the process of returning to its natural state. Eventually, you’ll cross a four-way junction with a trail that heads to the Porcupine Flat campground. Ignore it and continue straight, heading south into the forest. 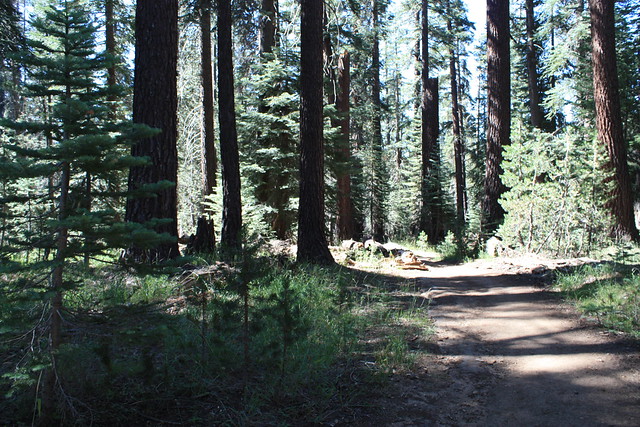 For the next 1.3 miles, the trail continues south through some beautifully quiet Sierra forest. You’ll be surrounded by tall evergreens and cross a few small creeks and meadows as the trail levels out a bit after the initial descent near the trailhead. Enjoy the soft ground beneath your feet, and the fact that you’re not pushing through crowds of tourists in the Valley. 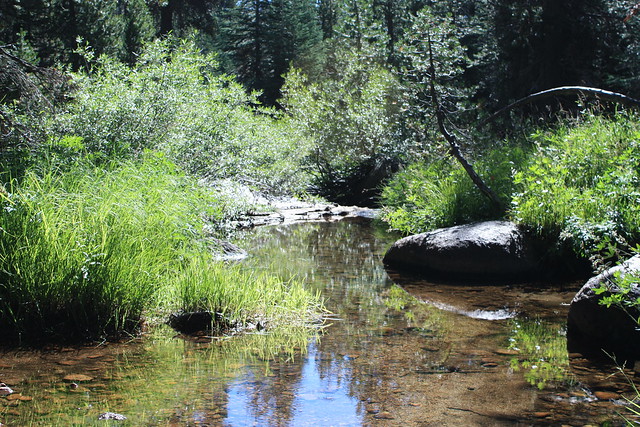 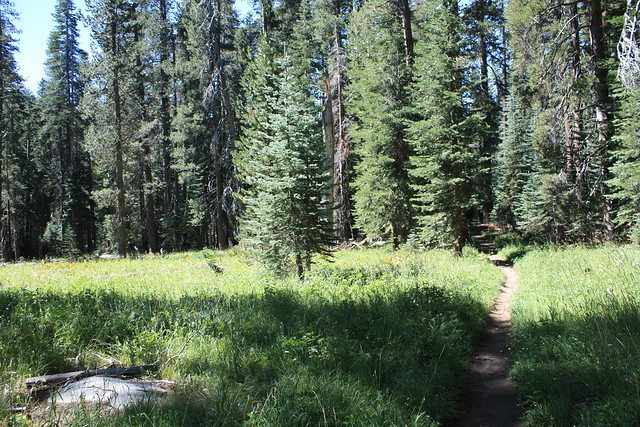 At about the 1.5 mile mark, you’ll reach the end of the first descent on the trail, which is near a junction with a trail that runs from Yosemite Falls to the Valley Floor via Tenaya Canyon. Stick to the clearly marked trail to North Dome and start the steady climb up Indian Ridge.

For the next 2.7 miles, the trail ascends through the tree cover on Indian Ridge, but it’s not very steep – you only gain 350 feet in that distance, which puts you about at the same elevation as Tioga Pass Road at the trailhead. Skip the trail to Indian Rock for now, and feel free to look through one of the few clearings in the forest for some decent views – but don’t spend too much time. The views from the Dome are much, much more impressive. Just stick to the trail as it starts up the slope of Indian Ridge and take in the views of Half Dome to your east, through the trees. 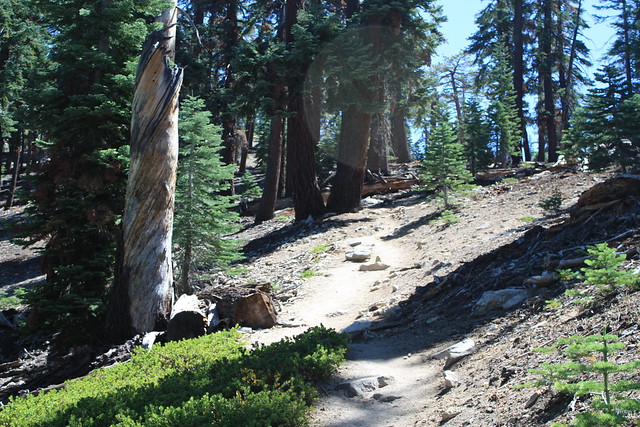 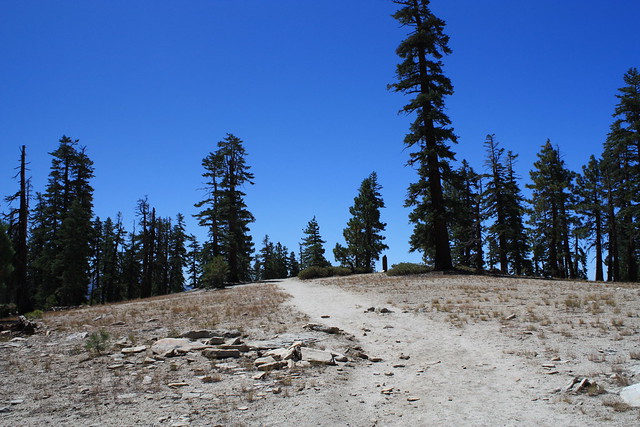 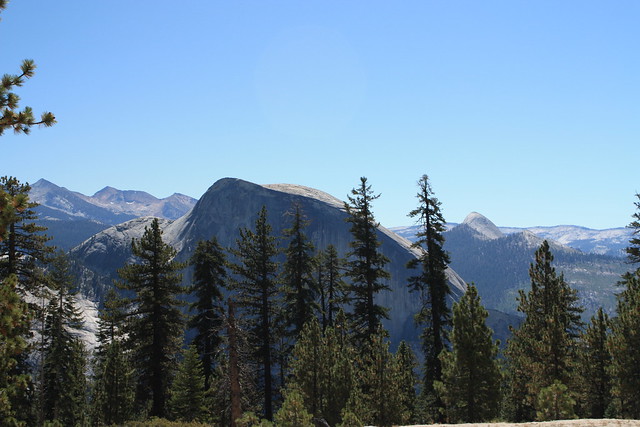 As the trail makes its way up Indian Ridge, the trees will clear as you reach a flat area of the trail. For first-time hikers on the trail (yours truly included), it’s easy to think this clear granite area is North Dome, and you’ve just been hiking a lot faster than you usually do. But, alas, this is not North Dome, but just a treeless portion of Indian Ridge. Look for a large tree on the eastern edge of the clearing, and you should be able spot where the trail continues: 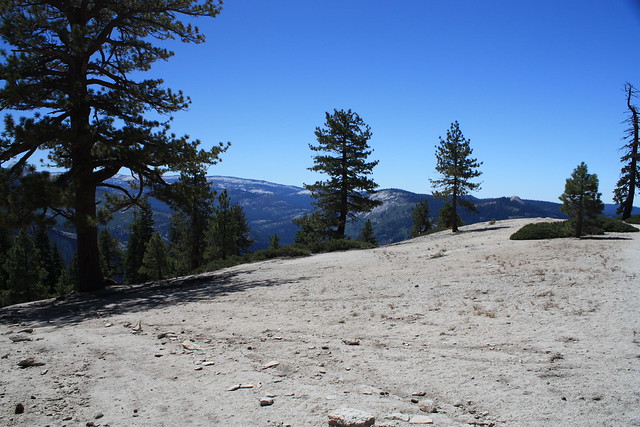 After heading through some low brush on the eastern side of this ridge, the trail makes a pretty straight shot onto the northern granite stretch of North Dome, dropping 662 feet in the process. The ground here gradually turns from dirt to exposed granite, and can be slippery – so be sure to watch your footing. It’s a long drop down. 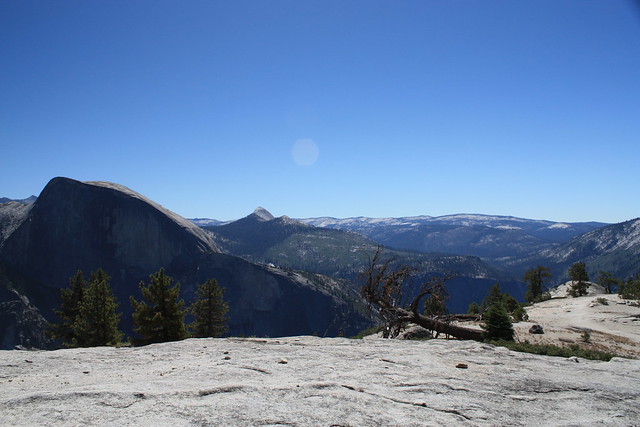 Ignore the trail junction to Yosemite Falls and look straight ahead to see North Dome right in front of you: 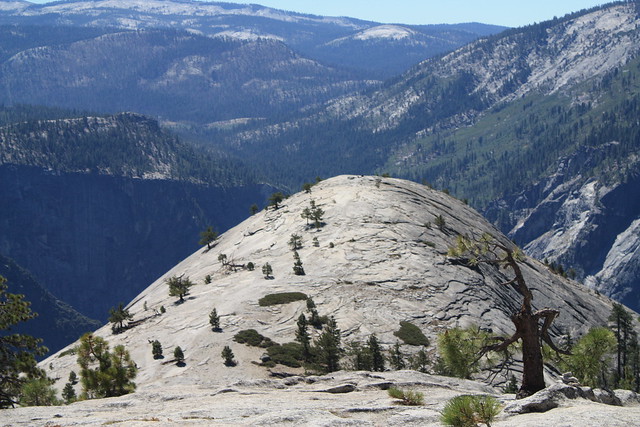 The descent in this area of the trail is even more steep and slippery than the first one. While you’re probably pretty safe along the entire trail, this was the one stretch where my fear of heights kicked in. It’s very, very manageable – just go at your own pace and feel free to take a breather if you think you’re psyching yourself out coming down little stretches like this: 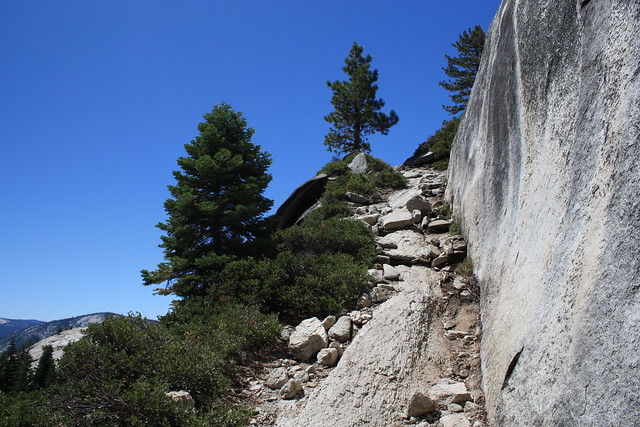 Eventually, you’ll reach a small depression between North Dome and the edge of Indian Ridge. From here, it’s about 0.25 miles and 150 feet up to North Dome. The rock here can be slippery, too, but you’re coming up in the center of the formation so you shouldn’t have any height-induced panics. 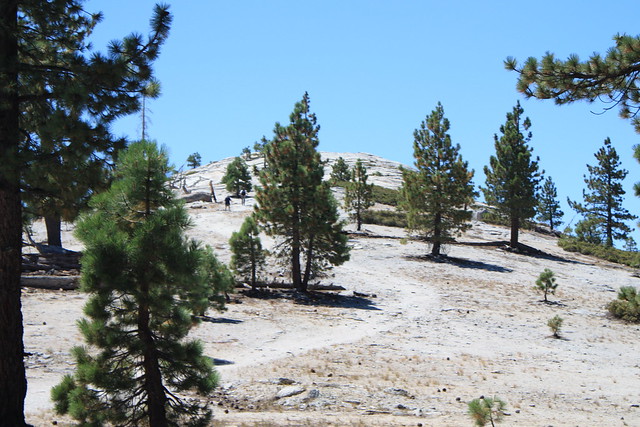 Climb up this short incline and then prepare yourself for some breathtaking, unobstructed 360-degree views of Yosemite: 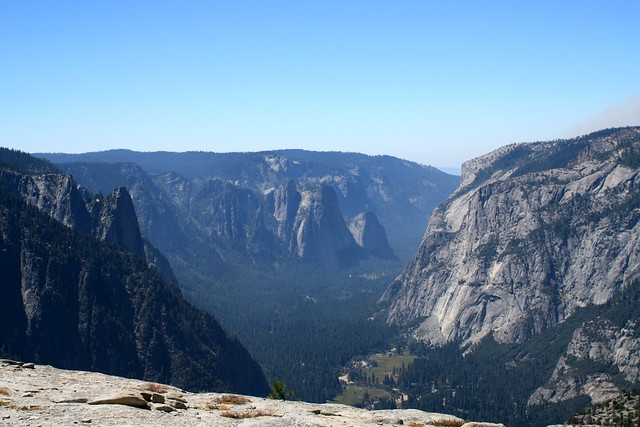 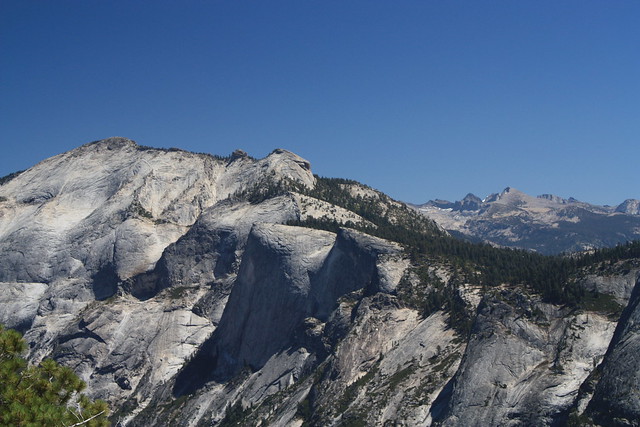 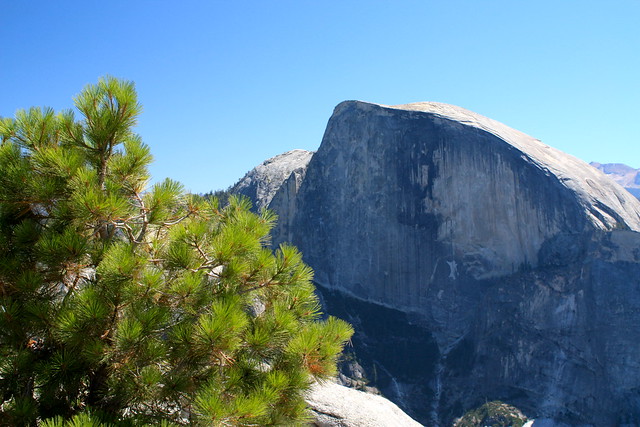 When you’re done soaking in the views, return the way you came. At the junction with the Indian Rock trail, hang a quick right and hike 0.3 miles up toward Indian Rock and you’ll see a prominent natural arch at the high point of Indian Ridge. It’s the only natural arch in Yosemite National Park, and it’s pretty easy to get to. You can even climb around it if you’re feeling particularly inspired! 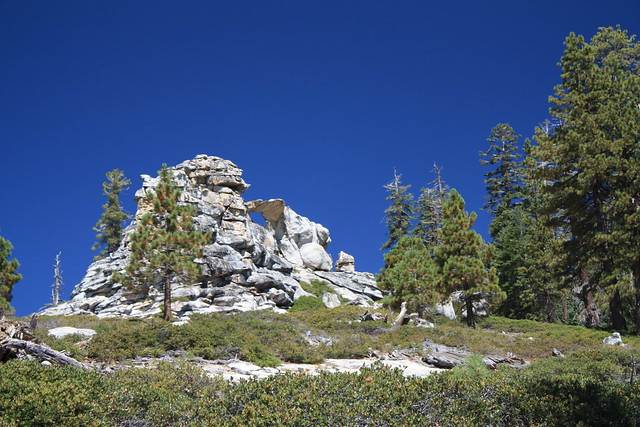 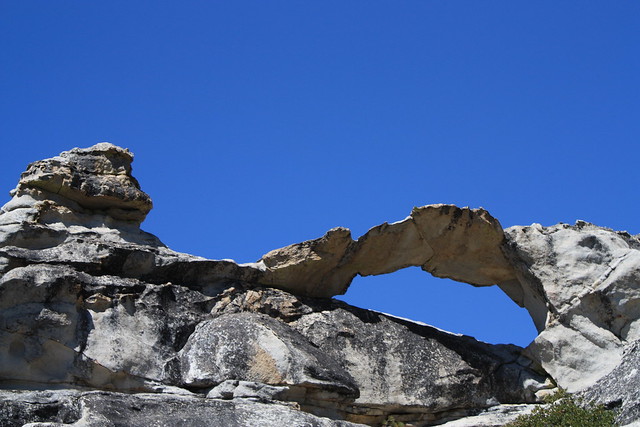 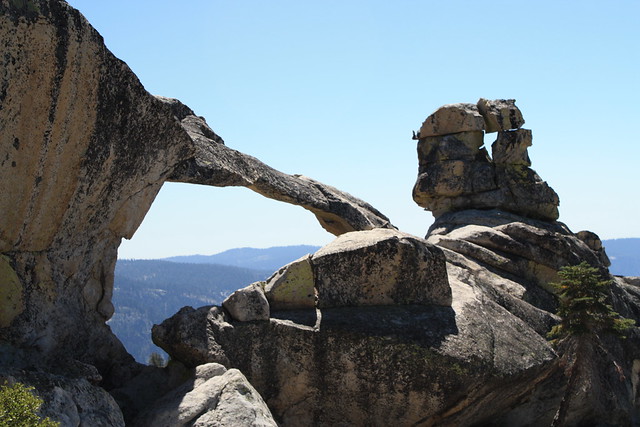 When you’re done, just head back down and rejoin the North Dome trail, heading back toward the trailhead, or continue along the Indian Rock Trail to its namesake (elevation 8522) just a bit to the north.

Very good. While there are a few junctions and fire roads near the trailhead that aren't well marked, most of the major trail junctions are very clearly signed.

Porcupine Flat is the closest established campground to the trailhead.

The trailhead is on Tioga Pass Road about a mile east of the Porcupine Flat campground. There's a small parking area and an outhouse, but it's easy to miss if you don't keep your eyes out for it.

Thanks Casey, Quite excited about our trip in September. Certainly get some weird looks pulling out a fishing pole on the top of a mountain. Will post our trip on the Blog.
Using a Yosemite Topo map with Garmin Base Camp. The contours are a bit odd, eg 2438 metres but I assume this is an imperial to metric conversion of 100 foot contour marking.

No worries and thanks for writing in. I just 'upgraded' this post to include the inline maps that our more recent (and soon to be ALL) posts have and double-checked the trail on CalTopo. The Arch is on the Indian Rock Trail but it is not actually on Indian Rock, which is that high point you were noting that's a bit north of the arch itself. You can follow this GPX file to the arch and then just keep hiking on the Indian Rock Trail to the north to hit your high point.

I've updated the text for a bit more clarity but hopefully that helps!

Casey, thanks for the information and also found a GPX file. I am interested in Indian Rock for a Summits On the Air (Amateur Radio) activation. You mention that Indian Rock is a prominent natural arch at the high point of Indian Ridge where as my mapping shows the high point (2598 metres) being some 700 metres further north. Not being pedantic but need to be inside of the activation zone which is inside of 25 metres from the highest point.
I have a 16 metre discrepancy between my map and the track file (GPS altitude error?) .
So, just wondering what the ground may be like in order to gain a further approx 25 metres in altitude from the high point - was it the top of the arch? (Not sure if the GPX file was yours or from somebody else?)
Cheers Tony [email protected]

the cheat version of this - hiking bus to porcupine flats, to north dome, to yosemite falls, and down, is also good

Great to hear! I'm not 100% certain where the camp site is over there but this is definitely the main route to North Dome (and it matches up with the trailhead on the Quora page). Just make sure you have all the proper backcountry permits and have a blast - the views from North Dome are pretty amazing.

Thanks for posting this! I'm planning a Thanksgiving trip with my brother and best friend, and the pictures, descriptions, and directions are SUPER helpful. Do you know if this is the trail with the campsite at the top? Here is an article I read referencing it. Thanks!

It's not allowed here and would be too dangerous anyway.

Please let me know if this trail is good for biking.

Half Dome via The Mist Trail

Half Dome via The Mist Trail