A 7+ mile semi-loop in one of the Los Angeles area’s most accessible parks. Some classic, Sycamore-covered SoCal geography, with meadows, boulder formations and outcroppings, and rolling chaparral ridges. Excellent views of the Pacific Ocean, the Santa Monica Mountains and — if you’re lucky — the far reaching sprawl of the Los Angeles megalopolis.

What’s important for hikers is that the park is big, has a very-well designed and labeled system of trails, and is accessible from several different approaches. From the north, you can enter off Reseda Blvd. through Caballero Canyon Park, from the south, entrances are just off Sunset Blvd. through Will Rogers and Temescal Gateway Parks, or through the Pacific Palisades neighborhood. Or you can enter from the western end of the park, from Topanga Canyon’s Trippet Ranch.

I hadn’t been to this park in a long time, although it was one of the first places I started hiking in Los Angeles. On a Monday afternoon, the Trippet Ranch parking lot was almost empty, and the air had just enough of a chill to require long sleeves. In other words, perfect. From Trippet Ranch, there are several options, and I decided to head toward Eagle Rock on the Eagle Springs Fire Road instead of taking the Backbone Trail / Musch Trail. I should note, however, that during the spring and summer, the meadows on the Musch Trail absolutely explode with color, and it’s definitely worth exploring. From the parking lot, you can either wind up the East Topanga Fire Road to the Eagle Springs Route, or you can proceed up the much shorter Nature Trail that passes a ranch building / education center. It’s a very short path, and dives under some tree-cover for a quick glimpse at some typical coastal range sycamores. Shortly after that, you’ll find yourself on the Fire Road, which is wide, sandy, and well-maintained. If you’re hiking this in the summer, be aware that there’s almost no shade on any of the Fire Roads. What they lack in shade, though, they make up for in views. Almost immediately, you’ll be able to see wide-angle panoramas of Topanga Canyon and the rest of the Santa Monicas to the west. And, as it had just rained, the air was clear enough for me to spot some of the more southern Los Padres Mountains, also-snowcapped from the recent storm. At the 0.4 mile mark, keep on the fire road. A spur trail here will descend down toward Santa Ynez Falls.

After just over a mile of hiking on the fire road, you’ll start to make out the monolithic face of Eagle Rock, rising dramatically from the rest of the surrounding landscape. Here, the fire road meets back up with the Musch Trail and splits into a lower road and more rugged, ascending fire road. The ascending road winds for another half-mile or so, and will take you to the top of Eagle Rock itself. There, you can (carefully) walk along the rock formation and sit near the edge for some great views. The less adventurous can chill out on an engraved park bench that sits just above the rock formation. If all you’re looking for is a quick in-and-out, and maybe a good picnic spot, this should do the trick for ya. But I wanted to use all of the daylight hours of my surprise Monday hiking time … so after stopping at Eagle Rock for a few minutes, continued on the fire road eastbound. There were plenty of great north-facing views, as well as some distant views of the San Gabriels (I told you visibility is great after a rain!) and just generally nice scenery all around. Once you reach “Hub Junction,” it’s less than a mile south to meet up with the Rogers Road Trail, which will be the only time you’ve stepped off a fire road on this route unless you chose the Musch Trail at Trippet Ranch. If so, it will be – by far – the most forested section of the trail for you. You’ll only be on this trail for a very short time. Keep your eye peeled for a use-trail on your left hand side, and take this through a small scrub meadow and up to the unimpressive looking, but clearly marked Temescal Peak. It is another nice place to stop and take a hike break, as well as gaze back at Eagle Rock — just for a good dose of perspective and scale. I can’t vouch for non-post-rain vistas, but after a good sky-scrubbing, this peak sure makes for some great near-360 degree views.

From there, it’s back down to the fire roads and just under 3.5 miles back to Trippet Ranch. If you’ve got energy left, you can join the park’s joggers and try your hand at trail-running … or you can just take your time, and maybe get to enjoy the sun setting behind the mountains in front of you. 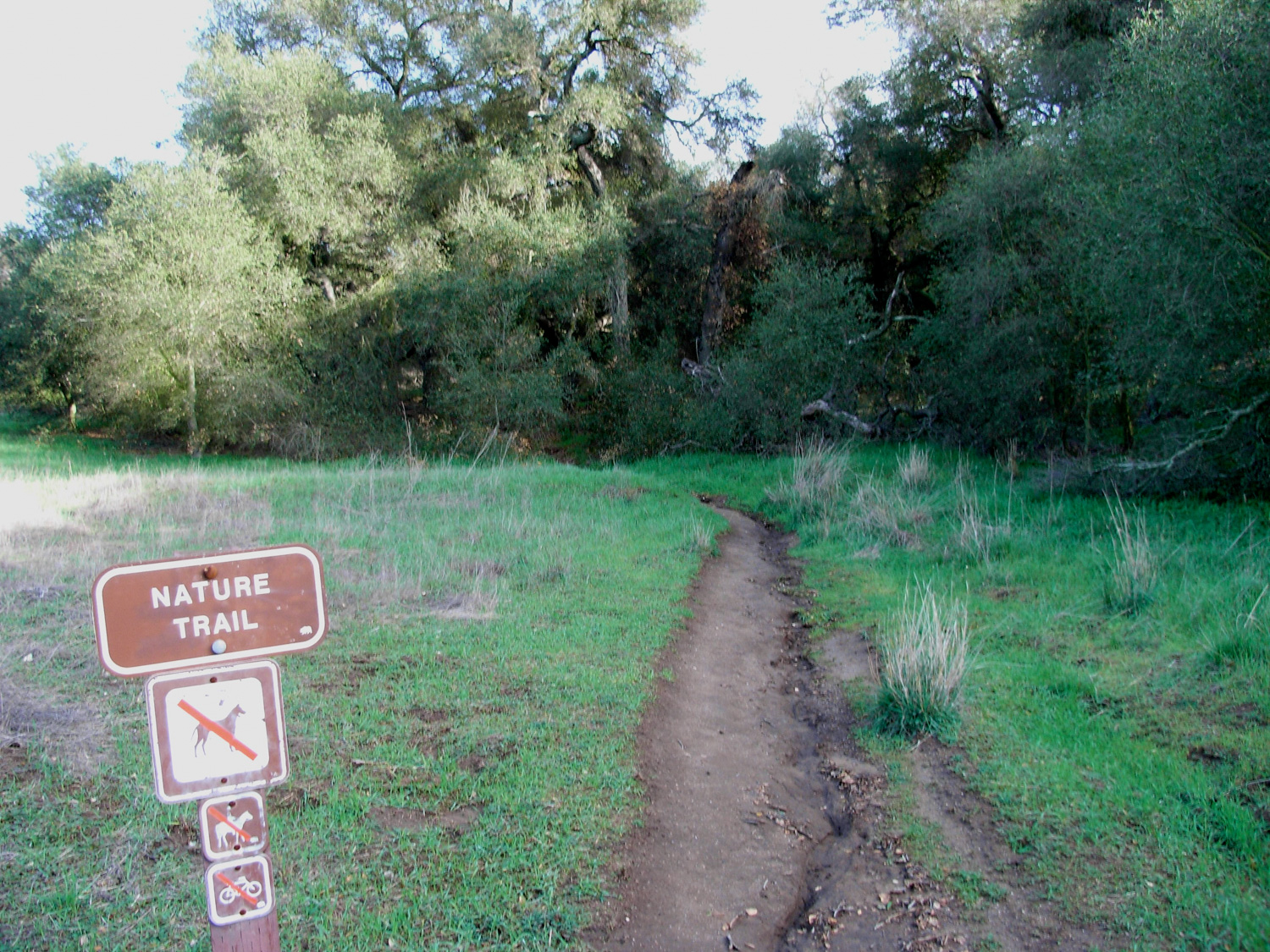 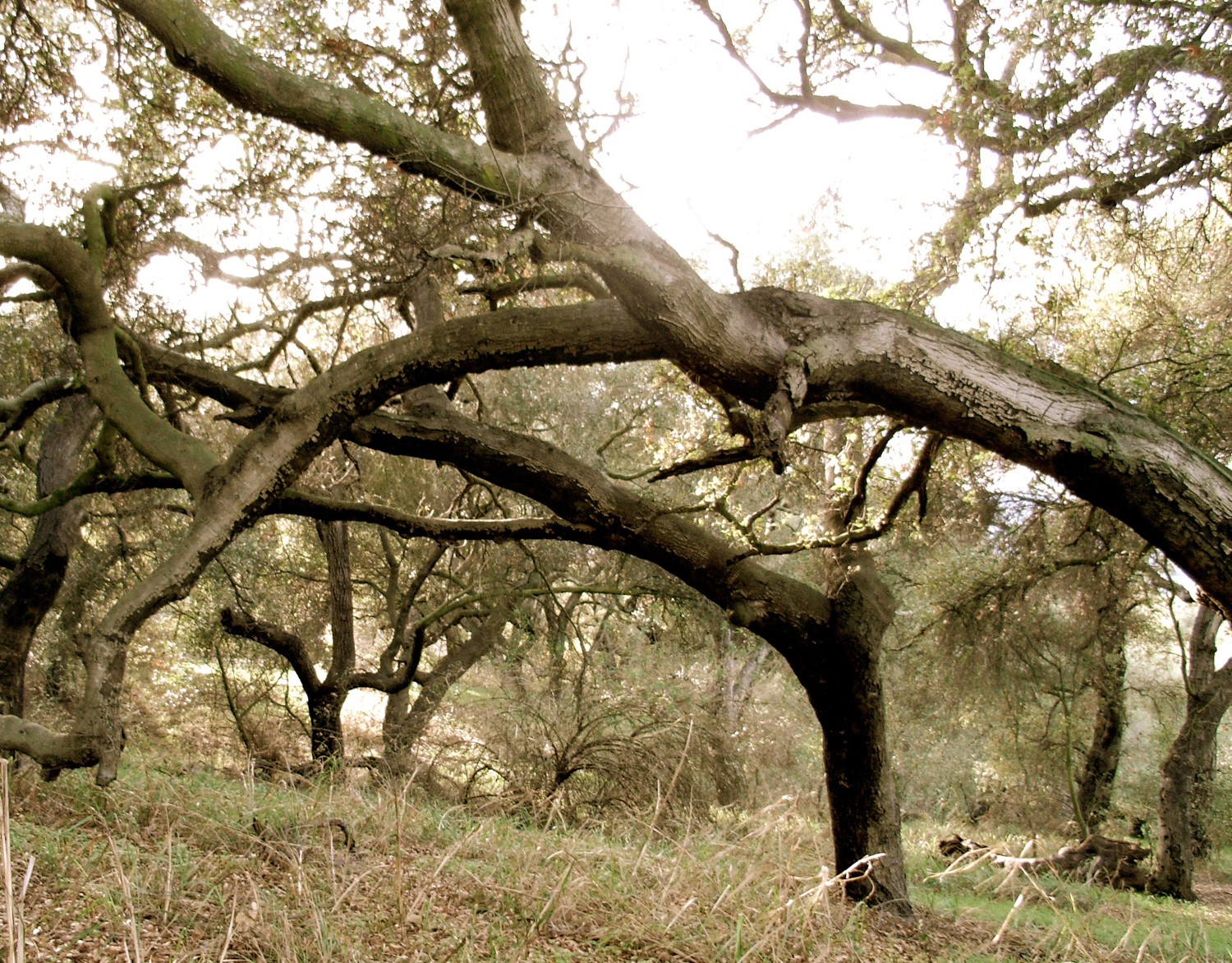 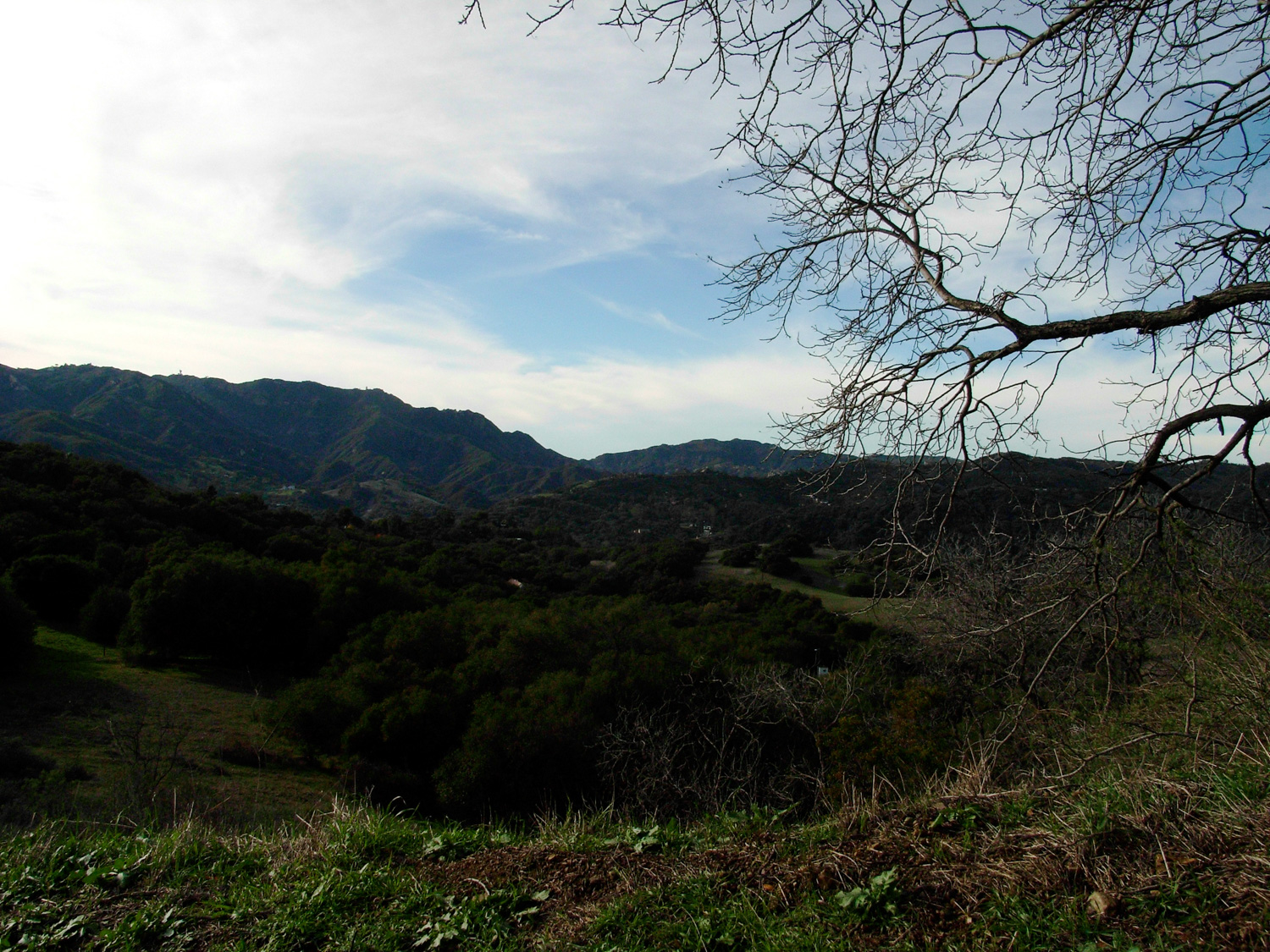 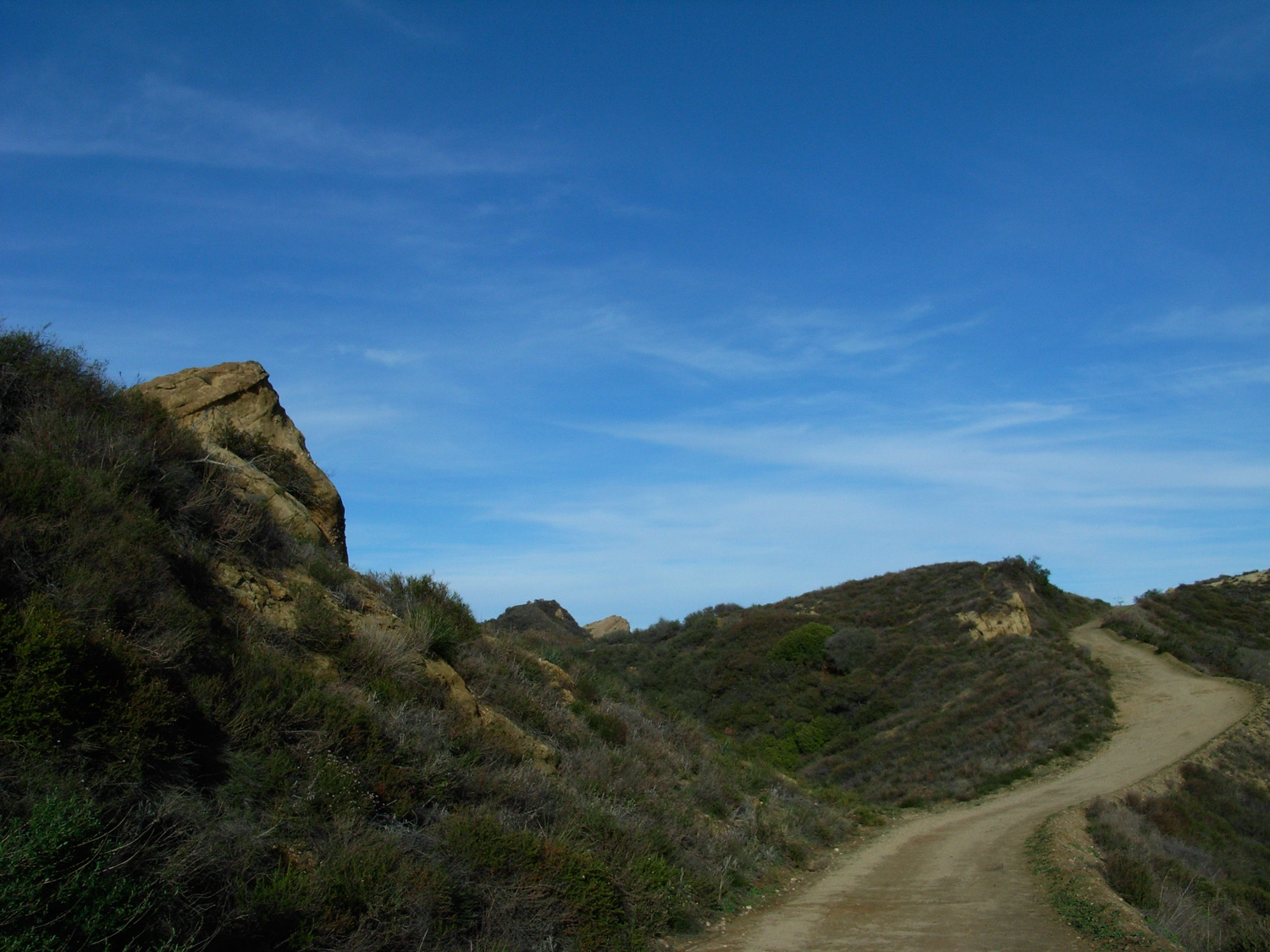 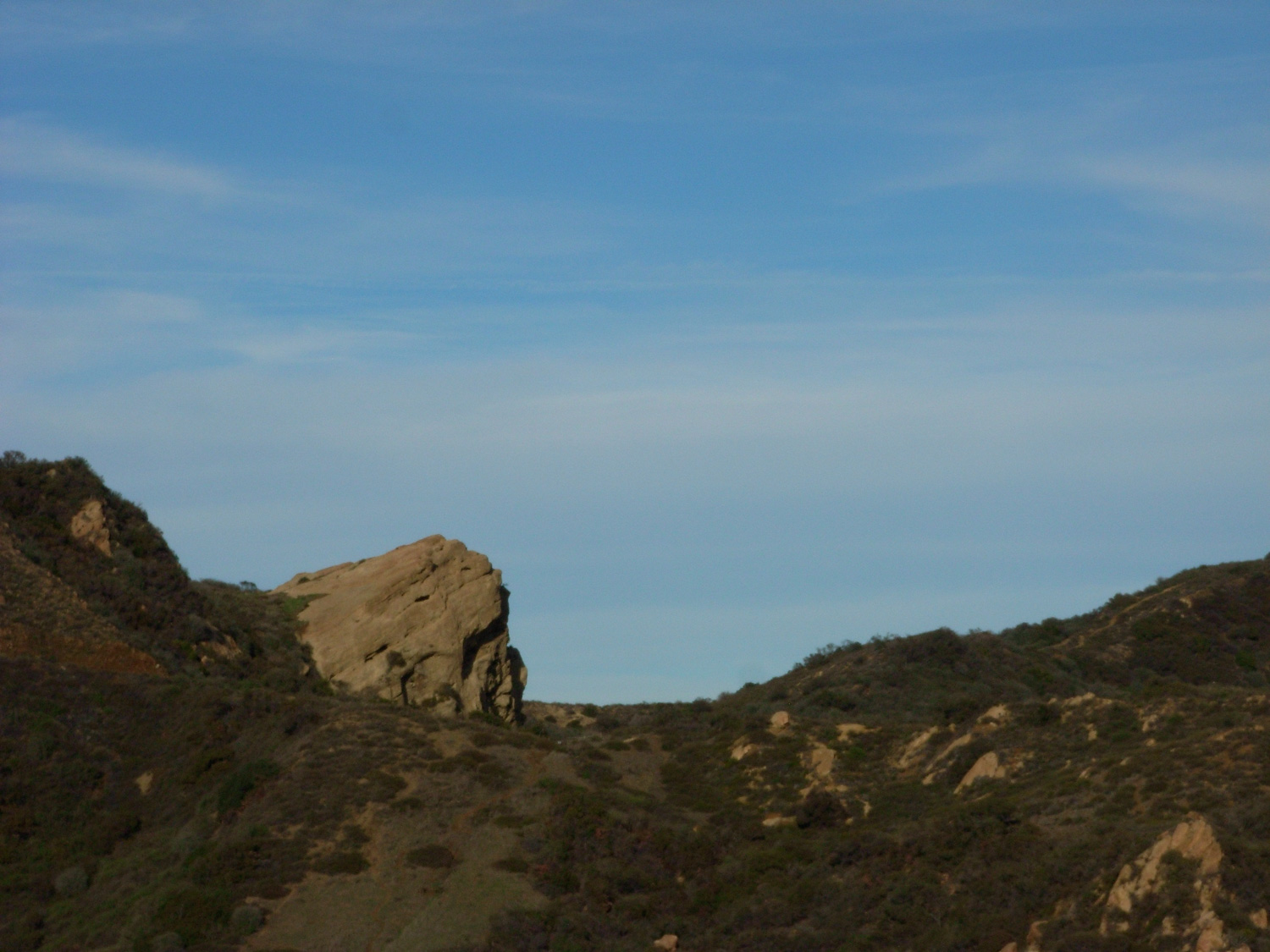 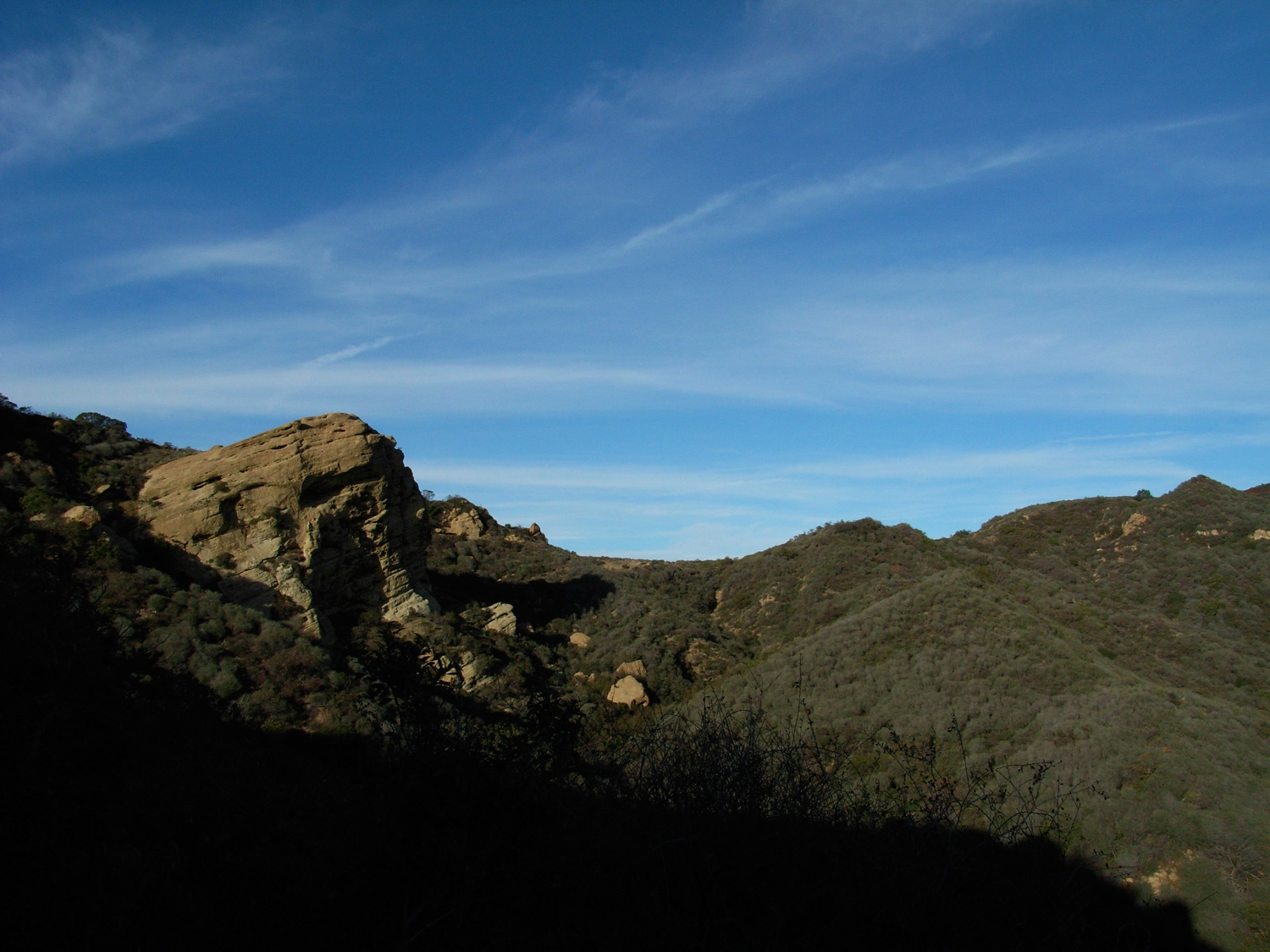 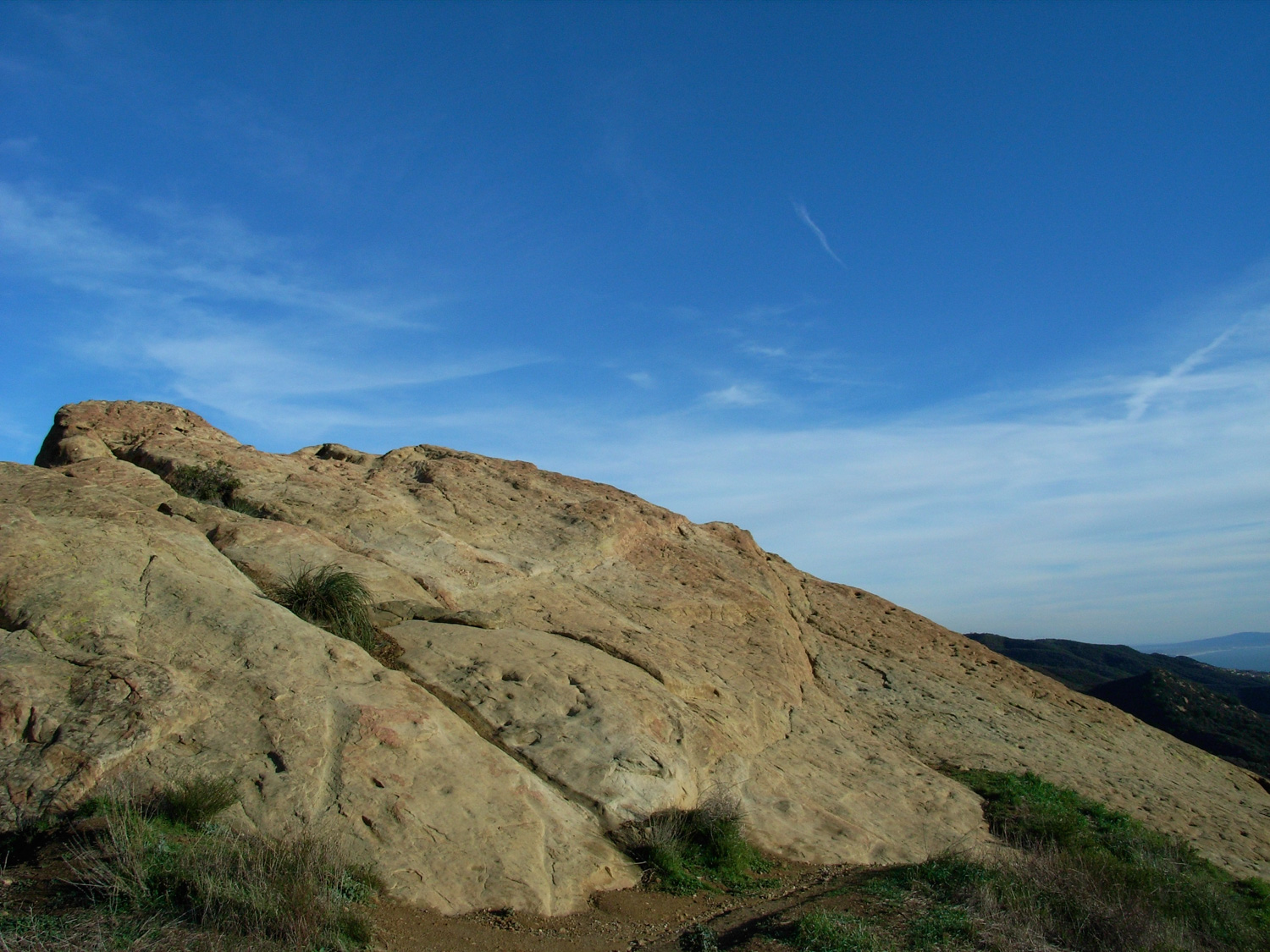 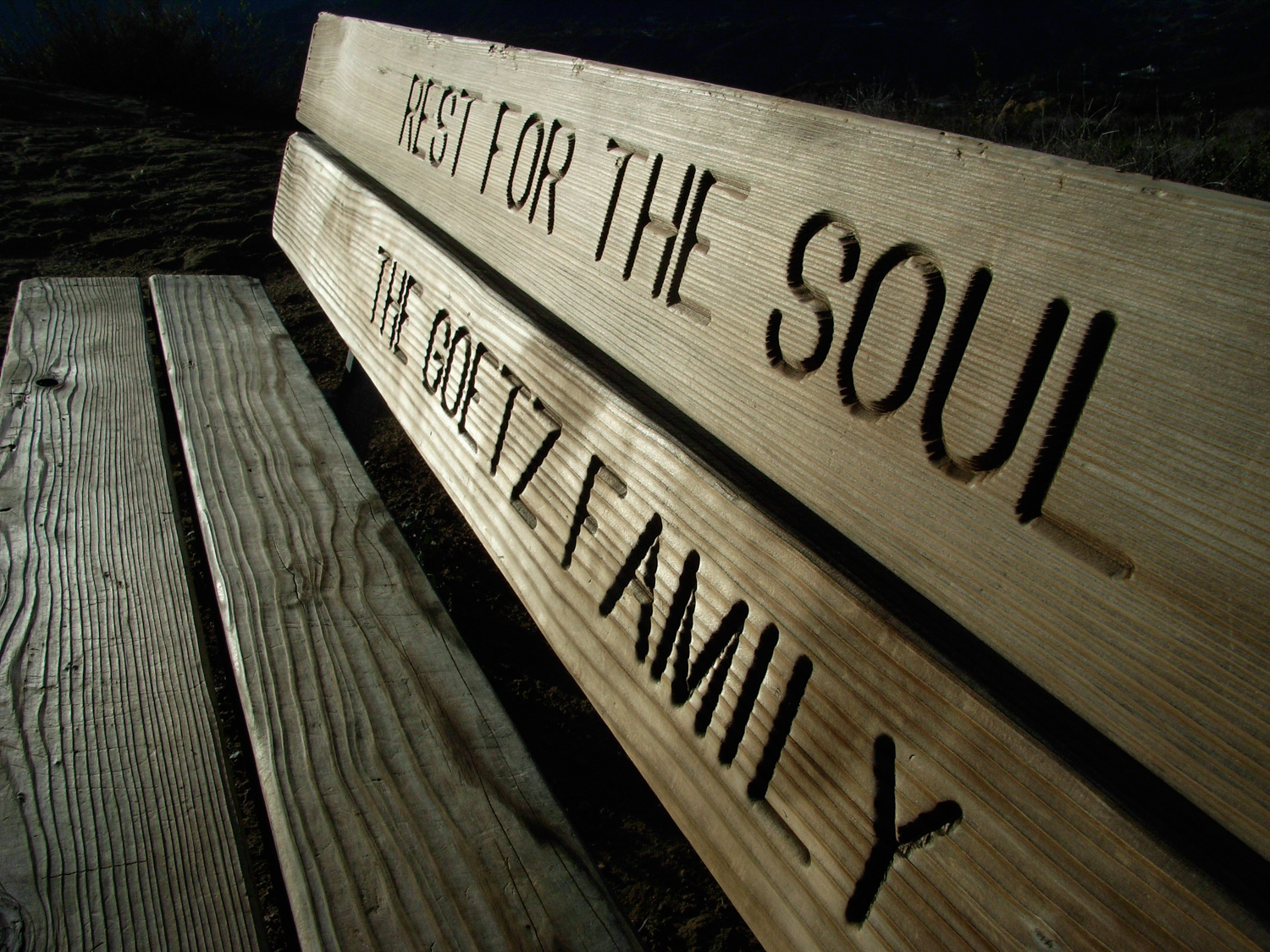 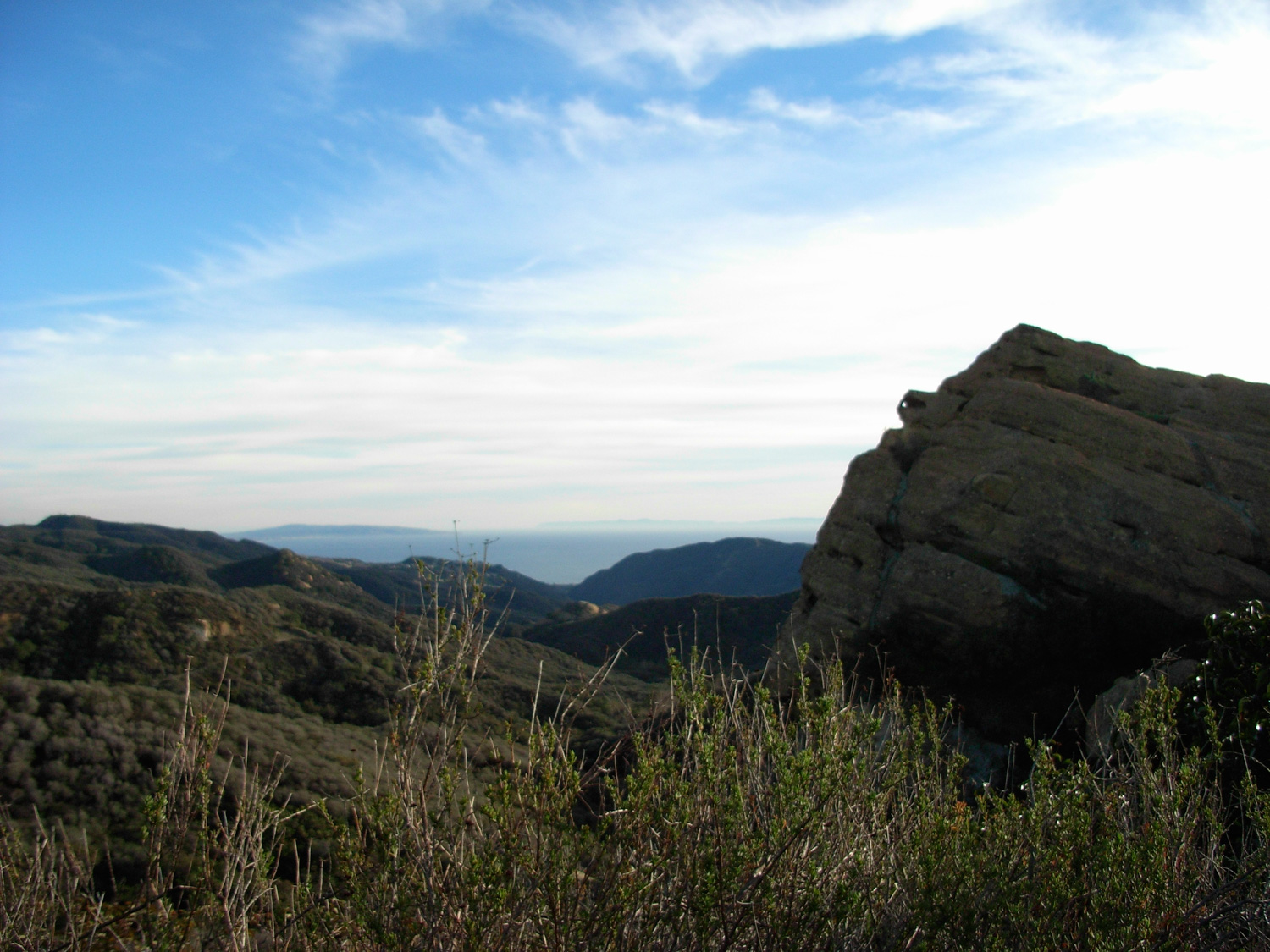 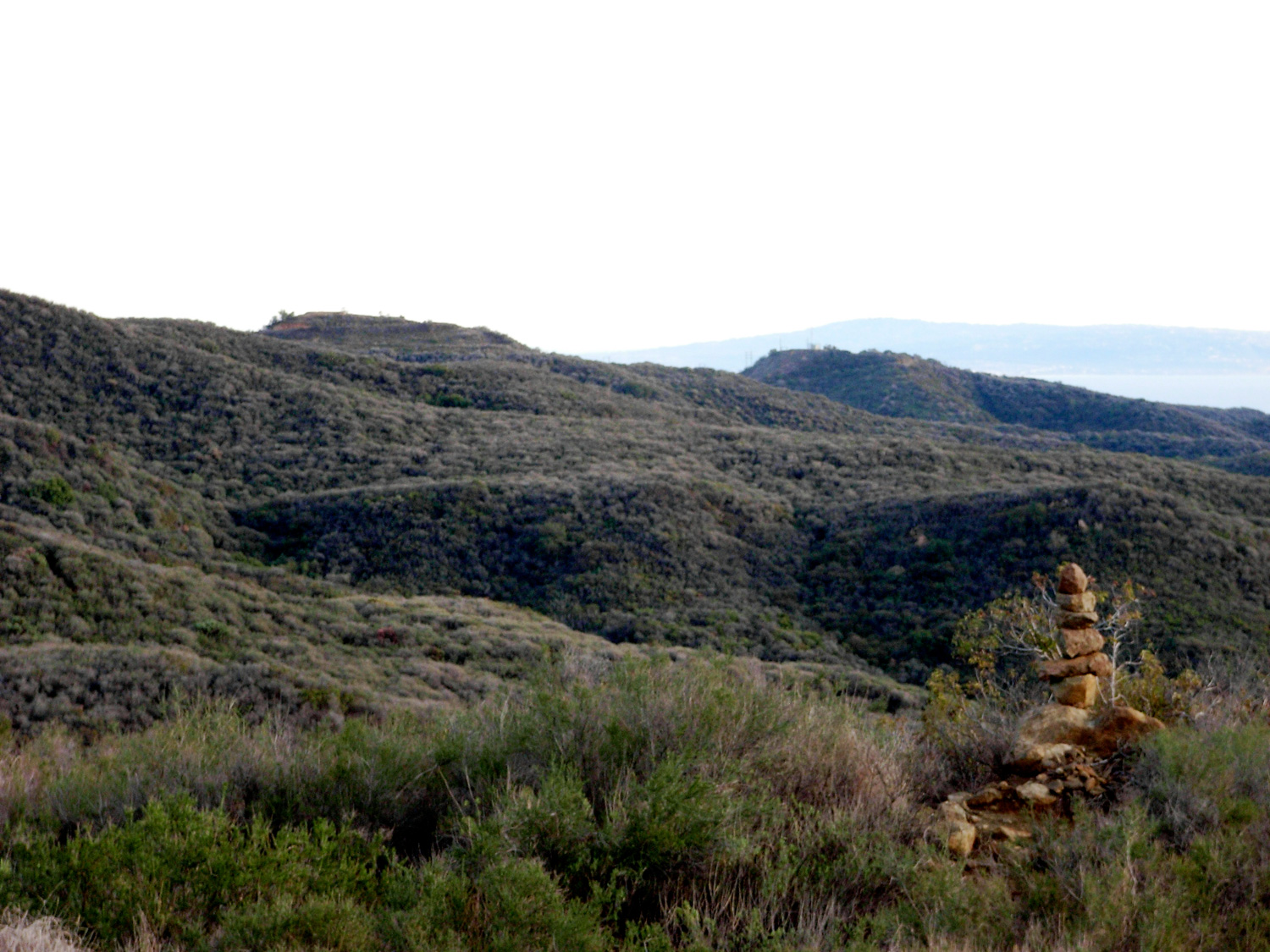 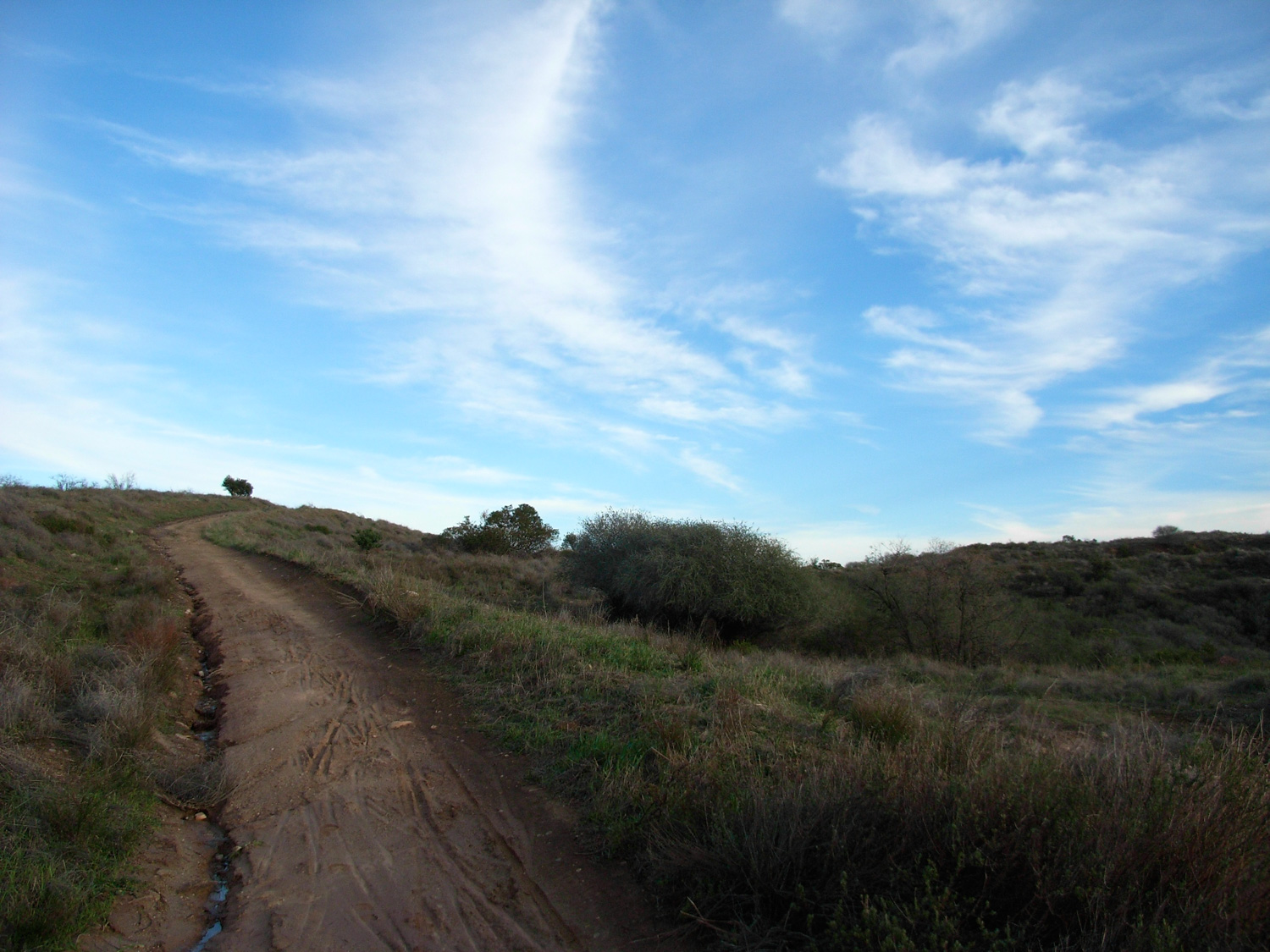 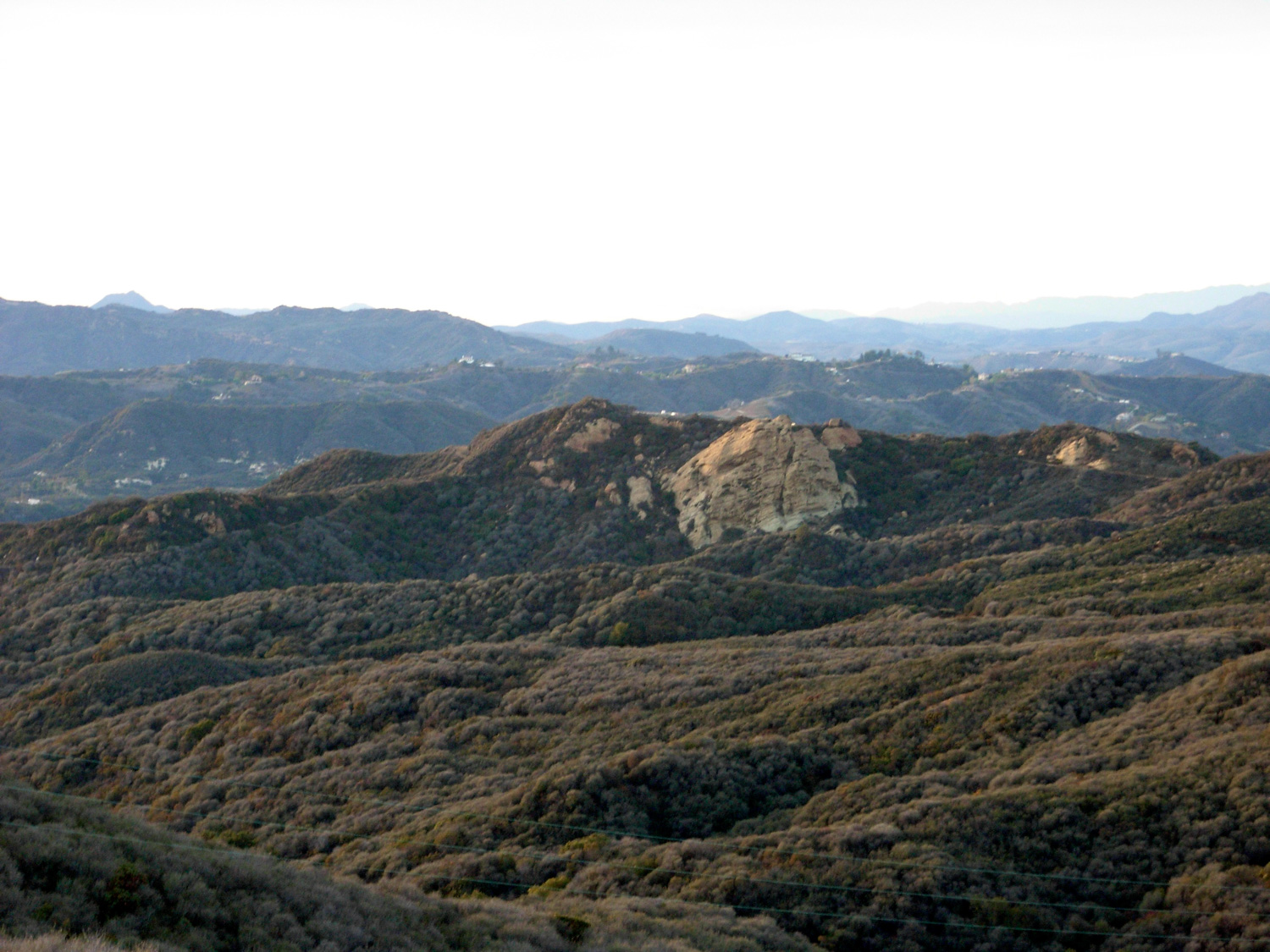 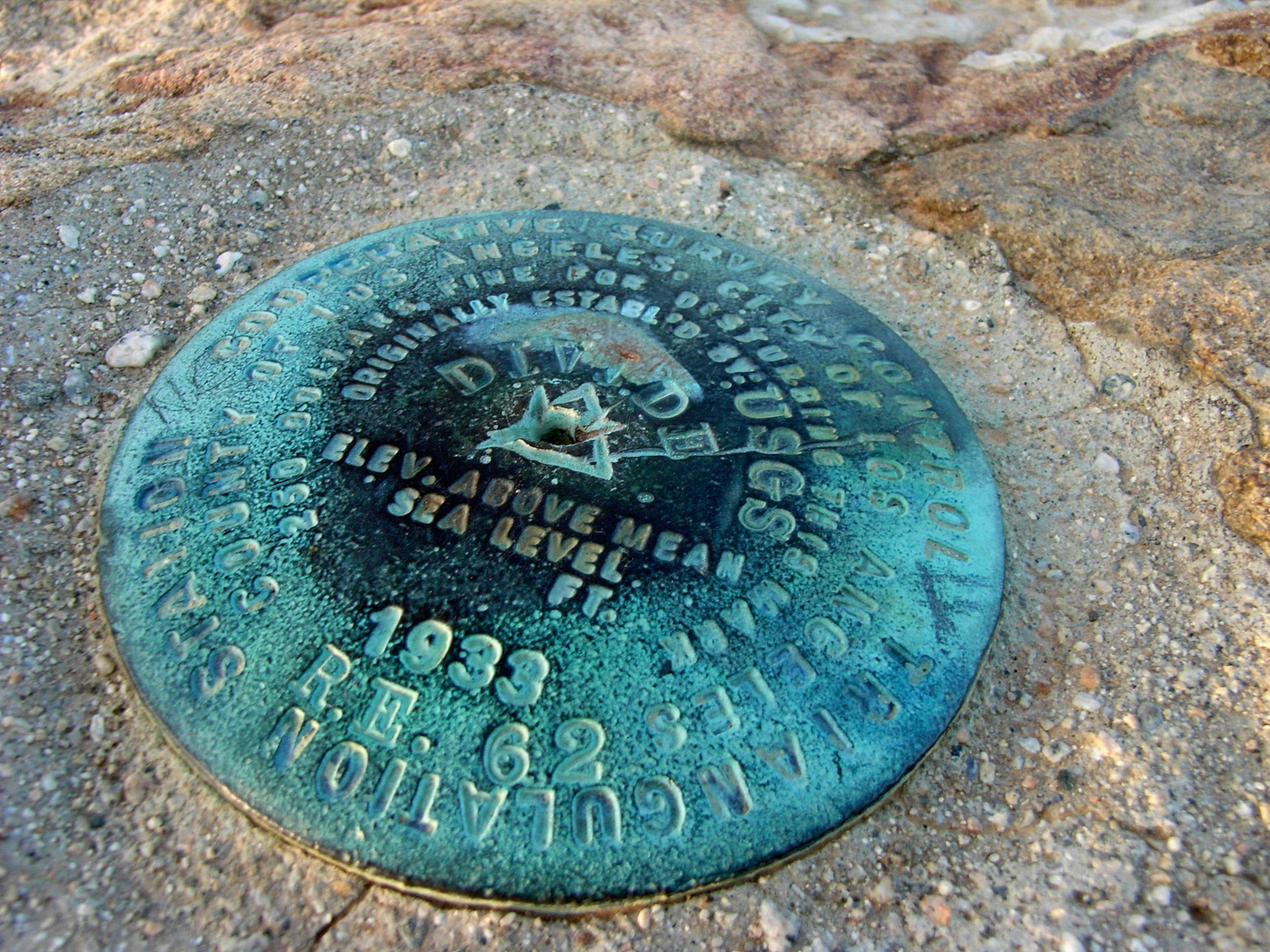 Excellent. Most of this route is on fire roads, but the trails in Topanga State Park are well-worn and well taken-care of.

A backcountry, first-come, first-served campground is available off the Musch Trail. Flush toilets and water are available. No fires allowed.

Take the Pacific Coast Highway north from Santa Monica to Topanga Canyon Boulevard. Head north on Topanga Canyon for 4.7 miles. Just past the village of Topanga, bear right onto Entrada Road and follow the signs for Topanga State Park for 1.1 miles. Parking inside the park itself requires a fee, but there is limited free parking on the roads outside.