A 7 mile out-and-back on the John Muir Trail to a set of glacial lakes in the Yosemite Wilderness. This northern hike near Tuolumne Meadows offers some relatively easy hiking away from the crowds, with some fantastic scenery not usually associated with Yosemite National Park. No views of Half Dome or tourists biking along paved paths here – just one of the most peaceful places I’ve ever been to.

Before this trip, all of my hiking in Yosemite had been from the valley floor or southern end of the park, so I wanted to make sure I hit some north-side trails. As a last-minute decision, I decided to hike the Cathedral Lakes Trail just before sundown, and it was well worth the trip. 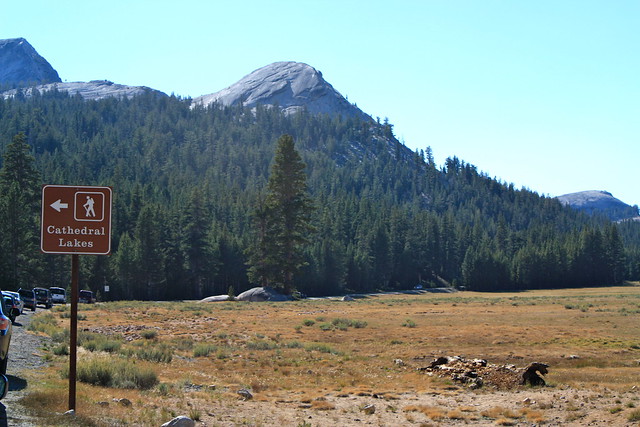 The trail starts just on the other side of Tuolumne Meadows, and while I saw a ton of parked cars near the trailhead, I met only a handful of other hikers on the trail – but I’m betting most them just hiked further into the wilderness than I did.

This is one of the only times when you could potentially get confused on which trail to take. This area contains the John Muir Trail, a trail that cuts east-west just below Tioga Road, a trail to the nearby Visitors’ Center, and several unofficial trails for climbers to tackle the nearby granite. The early part of the Cathedral Lakes Trail is very well established, so follow the clearest, most trodden trail you see that heads southwest. 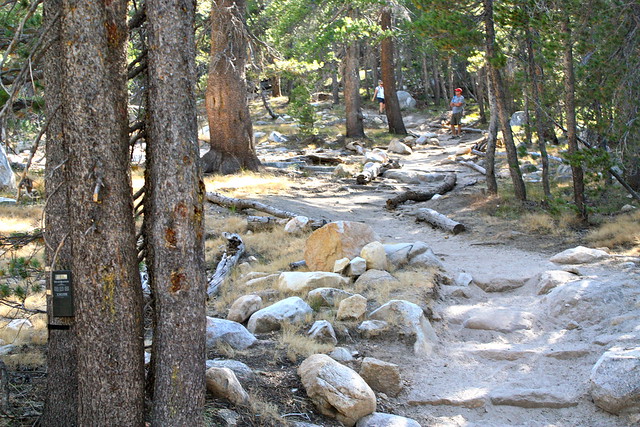 The early part of the trail is a rocky, uneven path that meanders through the thick forest. Hike ahead – and be sure to watch out for equestrians along the way, too. 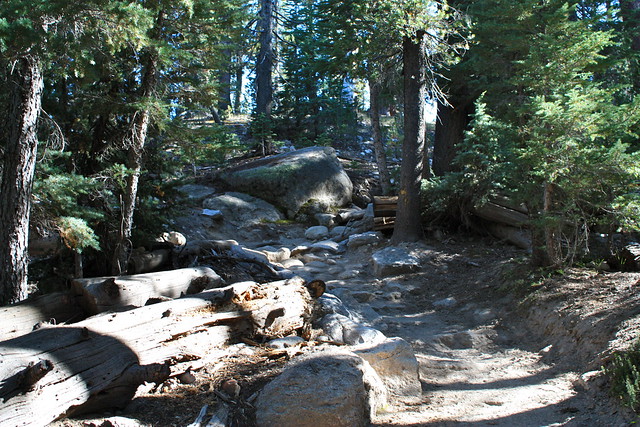 Early on is also when you’re going to notice how steep the trail is, gaining 570 feet in .85 miles. It’s nothing terribly difficult, but odds are you’ll be feeling a bit due to the elevation. Just take it easy and enjoy the shade – the trail evens out after that.

Through breaks in the forest, you’ll get your first view of Cathedral Peak – the 10,911 foot peak that looms over almost every inch of this trail. Here, it’s not going to look like much – just another one of Yosemite’s granite domes – but be sure to keep your eye on it as you continue. It gets a lot more interesting-looking the further south you hike. 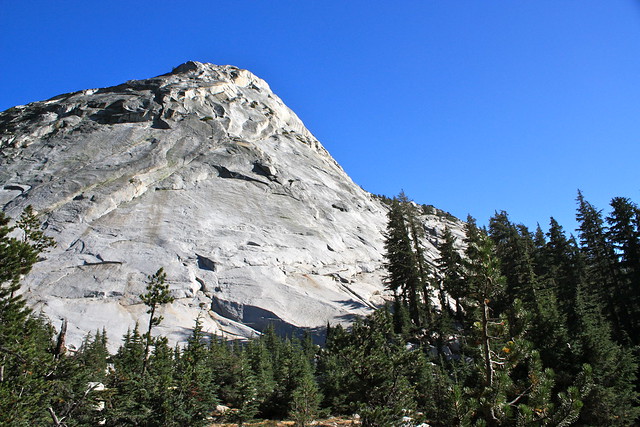 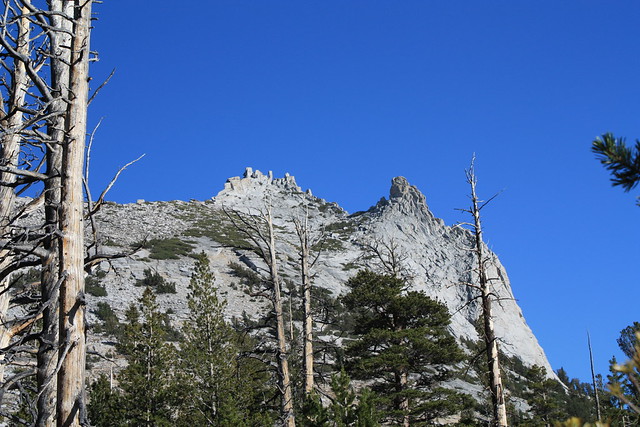 After about a mile of relatively flat trail, you’ll pass a spring and start to pick up your knees again for another climb. This one’s a bit easier – 415 feet over .82 miles – and hopefully by now you’ve managed to work up a nice bit of hiking momentum.

At about 2.8 miles, you’ll start to descend a bit through more rocky, shaded forest. You’ll eventually break out of the forest into a large meadow, and at 3 miles you’ll reach your only other trail junction. Take the Lake Trail and leave the John Muir Trail behind. 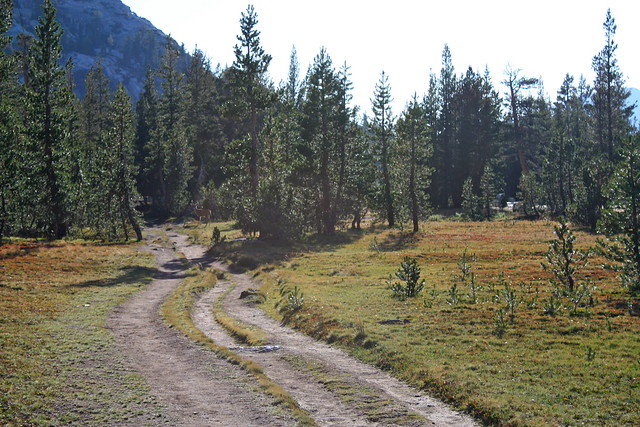 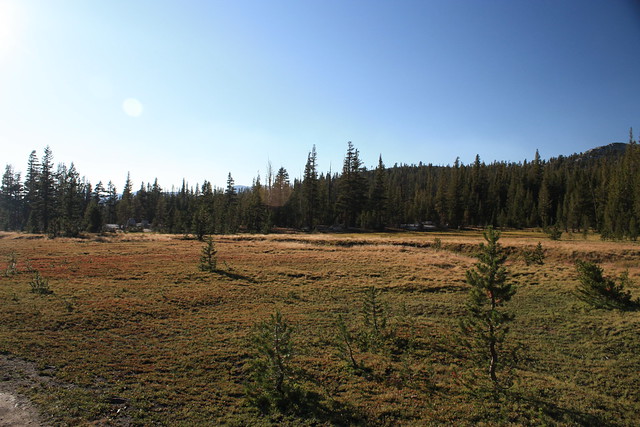 While you’ll be hiking toward a very picturesque lake, be sure to turn around to look back at Cathedral Peak to see how it got its name: 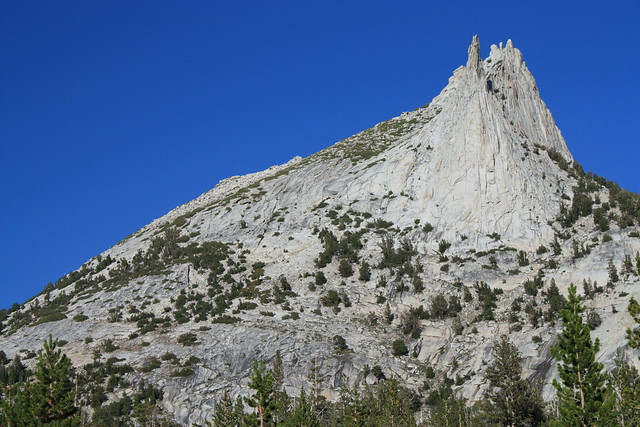 While hiking through the meadow, I came upon a few deer going about their business, so I stopped down for a while to let them continue unbothered. Even though I was trying to get back to my car before sundown, it was nice to sit and just watch these guys forage for a while. 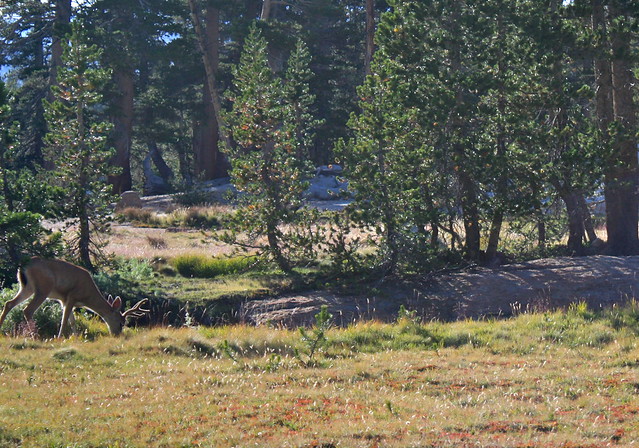 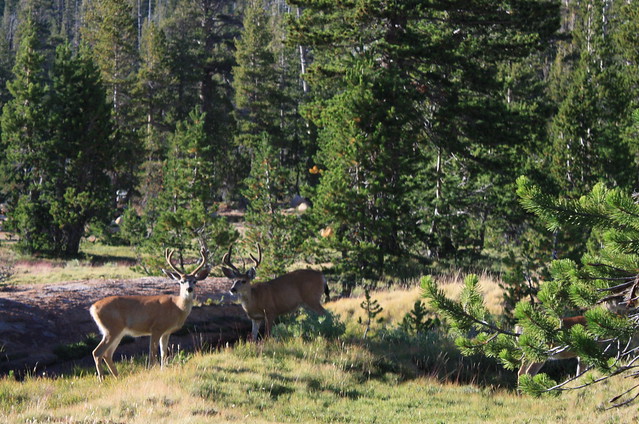 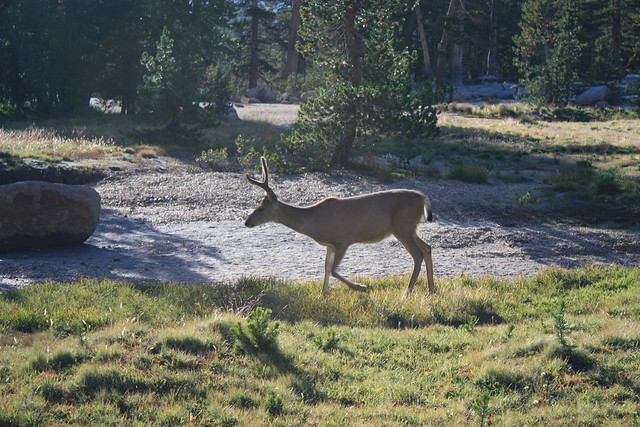 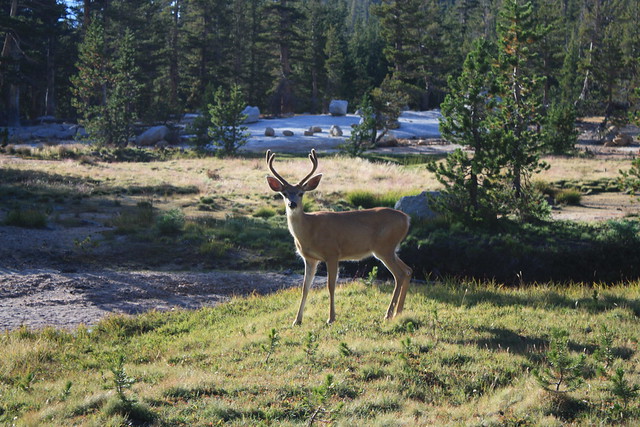 From the trail junction, it’s only a half of a mile to the northern Cathedral Lake. Depending on water levels and how late in the season you are, you may need to hop over a few branches of a tributary of Tenaya Creek on the way there. 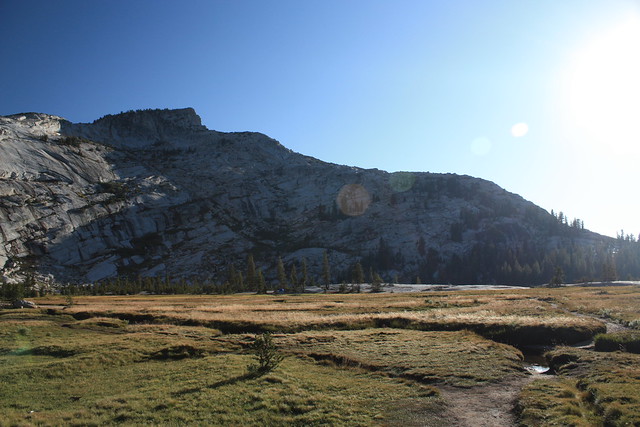 Just hop over the creeks and head toward the granite shores of the lake – then soak in all 360 glorious degrees of beauty. 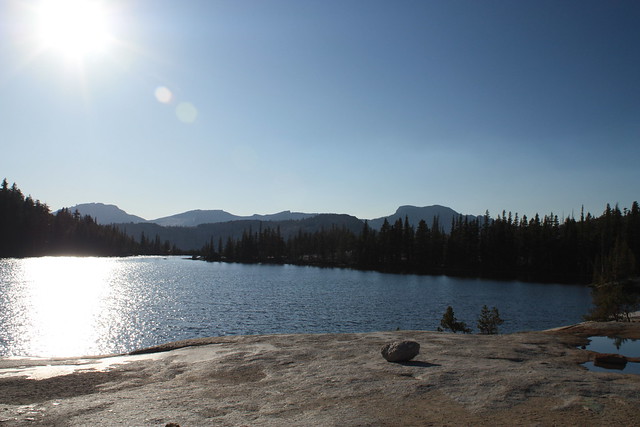 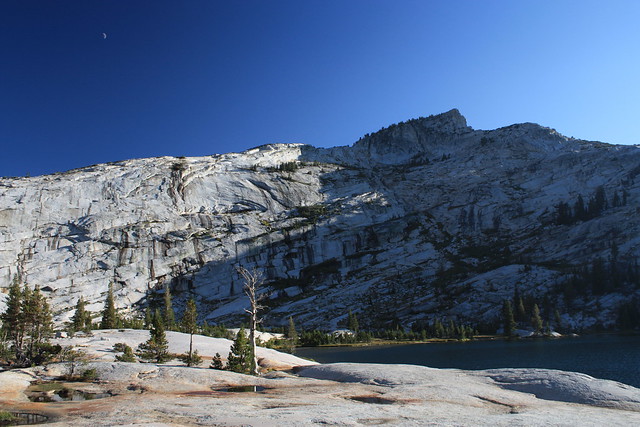 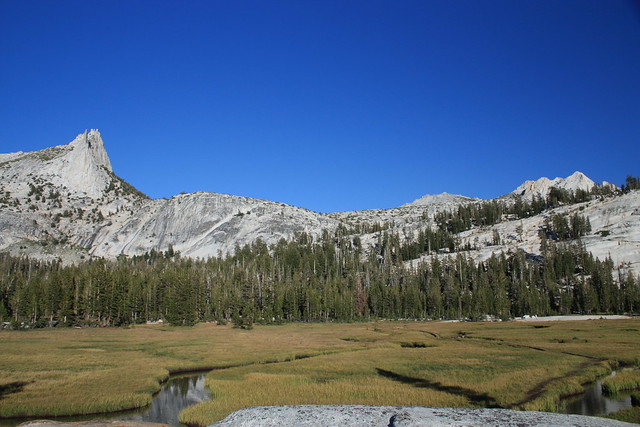 When you’ve had your fill, return back the way you came. If you hiked late in the day like I did, hopefully you’ll get a bit of alpenglow on your way out, too! 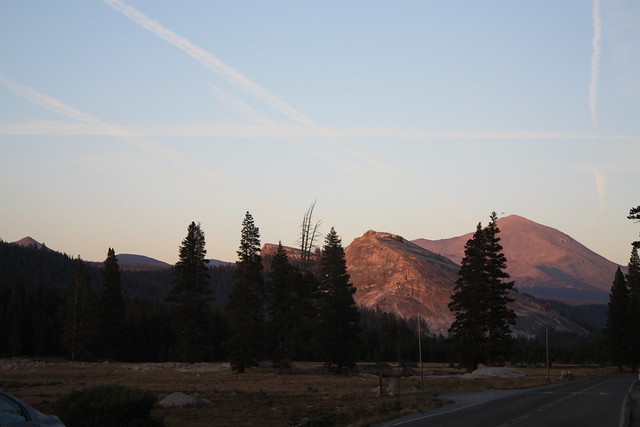 Very good. Most of this route is on the John Muir Trail - a heavily traveled and popular backpacking route. Besides the trailhead, there's only one other trail junction on this route, so it would be very difficult to take a wrong turn.

You can backpack at Cathedral Lakes with the proper permits. There is also a walk-in campground at nearby Tuolumne Meadows.

From the Yosemite Valley floor, head to Tioga Road and drive toward Tuolumne Meadows. Look for the trailhead marker (and some parked cars) just under a mile west of the Tuolumne Visitors' Center - it's just across the street from the meadows themselves.

We are going there this weekend with the family!

I just got back from a six-day Yosemite/Mammoth trip. Cathedral Lakes is a great hike, mostly for the beauty of the lake area at the end. It was hot and sunny when I did the hike, but interestingly, about a third of the trail was still covered in snow. It was a bit tricky following the muddy boot prints over a couple of the snow packs, but things seem to be melting fast so it gets easier everyday.

I and my husband did this hike couple of years ago in early September. It was absolutely beautiful, quiet and peaceful. I would have never imagined a lake at that level. The hike took a toll on my left knee since we had only one hiking stick each. We are hoping to go again this September, better prepared this time of course.

Ken, these photos are from a trip I took at the end of August last year.

What dates were these pictures taken? I understood there would be more snow in this area during May since Tioga Road just opened on June 5th. Any insight would be helpful since we will be in the area the week of June 13th. Thanks

Thanks for this writeup, I'll be heading up to do this hike at the end of June. I'm surprised at the lack of snow on the peaks this time of year.

Thanks for that catch, Jeff - that's a leftover from a post template that somehow managed to make it through to publish. It's now been updated.

I'm curios why it mentions "bike and dog friendly" under notables when niether is allowed on any trails in Yosemite.