Bow Willow and Rockhouse Canyons, along with the two rugged trails that connect them, combine to form one of the more interesting and adventurous loops on the southern end of Anza-Borrego Desert State Park. In addition to the stark, scenic beauty of the canyons and ridges between them, this hike also features the historical oddity of an old rock line shack tucked into the back of Rockhouse Canyon. A shack anywhere else goes unnoticed, but out in the arid expanses of Anza-Borrego, such a site is enough to give a canyon a name and serve as a worthy hiking destination. 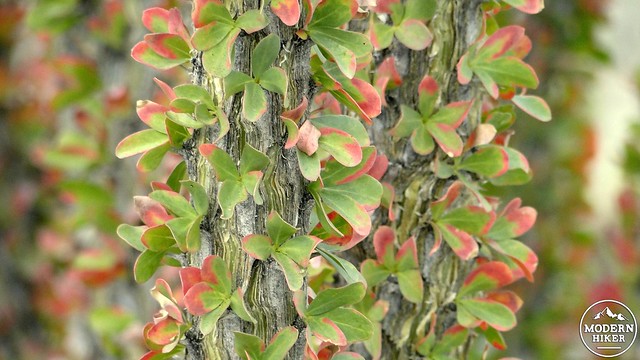 This area has a fairly long history of human use stemming back from the region’s original Native American inhabitants. One leg of the route appears to be an old Indian Route that continues to receive maintenance from the cattle who grazed here, presumably under the supervision of the builders of the old shack. Neighboring Bow Willow Canyon received its name due to the large groves of willows lining the wash. Native Americans once used the supple branches to create the bows they used for hunting. 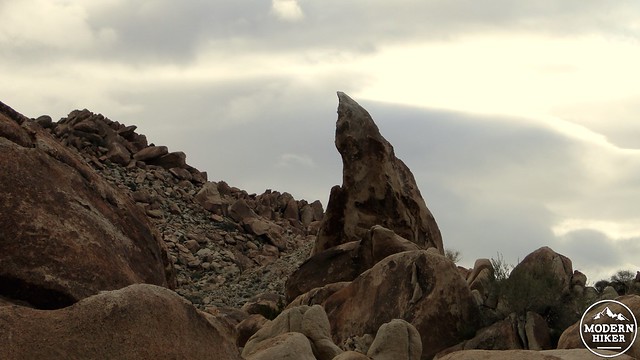 Granite crags between the canyons

Today, the main denizens of the area are transitory recreation enthusiasts. At one point, vehicle use was common in both canyons, but both canyons have since closed to vehicles, leaving them blissfully silent. The nearby Bow Willow Campground and the also-close Mountain Palm Springs Campground provide good home bases for extensive exploration of the immediate area, which also includes access to the palm groves at Mountain Palm Springs, rugged Sombrero Peak, Canyon Sin Nombre, and Arroyo Tapiado’s famous mud caves. 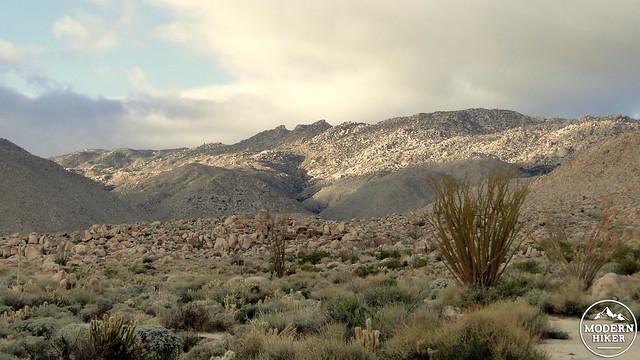 You will walk across this

It should be noted in advance that this is a rugged route that rarely follows a discernible trail. While the trail generally sticks to easy-to-follow washes, there are long sections that follow rocky plateaus that are poorly marked and require either competent navigational skills or adherence to the GPS track provided here. If you don’t have a lot of confidence in your ability to route-find in a poorly marked area, we recommend that you attempt this hike with somebody who has a good familiarity with the route. 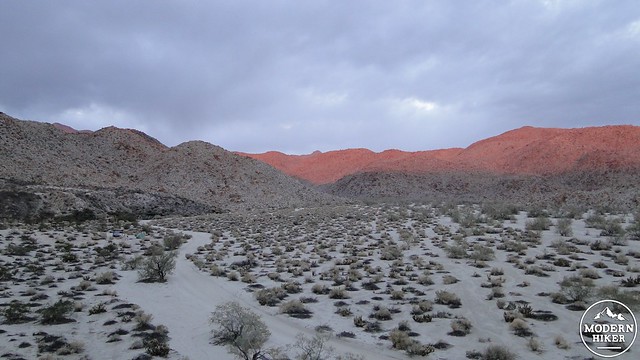 Toward Bow Willow Canyon at dawn 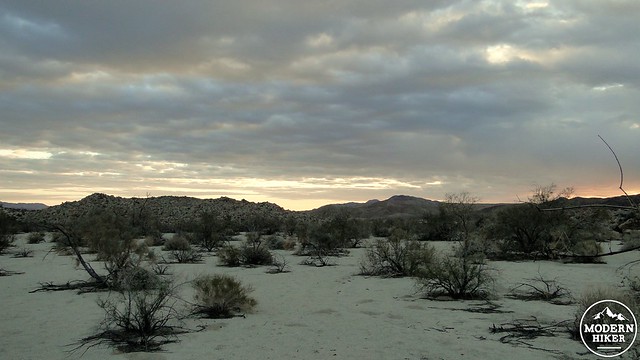 The hike begins from a somewhat vague trailhead at the west end of Bow Willow Campground. This trailhead follows the occasionally braided wash leading from Bow Willow Canyon, which will be directly ahead. As you approach Bow Willow Canyon, you will notice a smaller, narrower canyon opening up on your left at .5 mile. Turn left at this canyon and begin a rugged but fun ascent over a dry cascading creek bed. There is no real trail here, and you will occasionally find yourself climbing up boulders. This can be a challenge for casual hikers, but while you will want to be cautious, none of this scrambling is particularly dangerous. 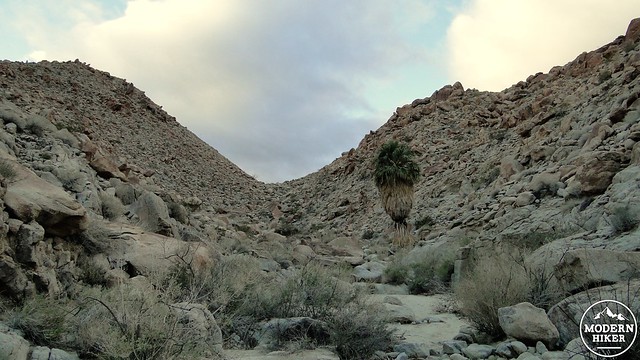 Along the way, you will pass a lone California fan palm whose water source is something of a mystery. This palm, which is a tropical plant that requires a lot of water, has no apparent source and survives in the company of a wide variety of xeric plants. 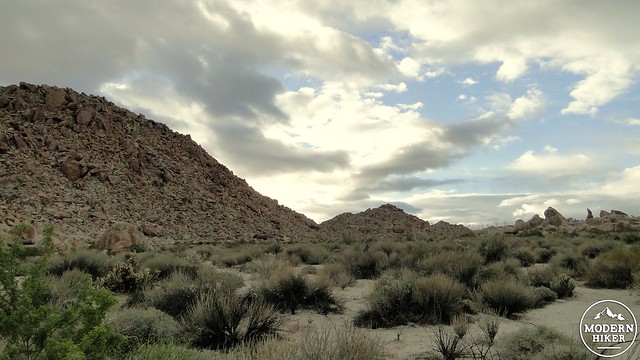 Wash above the canyon

After a brief, but robust climb, the route will emerge on another wash that will be pretty smooth going for a period of time. Along this wash, you will notice a number of interesting rock formations that become even more attractive when the light is right. Candelabra-like ocotillo bushes throw contrast against the rocky scene, while the path meanders through what becomes a broad valley on the way to a rocky plateau separating the two main canyons. 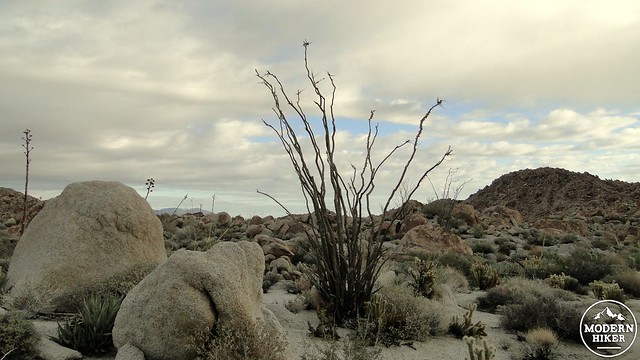 Ocotillo on the rugged plateau

Upon approach of this rocky plateau, the trail becomes vague and difficult to follow. While the actual exertion on this section is not particularly strenuous, keeping to the route can be a bit difficult. Numerous cairns (also called “ducks”) mark the route, but since this is a very rocky area, many of the cairns blend into the background, making it easy to go astray. If you are not an experienced hiker with good navigational skills, we recommend that you follow the track very closely to ensure that you don’t get too lost. Additionally, it is nice to have a reliable track to follow, as this is a beautiful section of this route, and the beauty of it is easily missed if you are worried about getting lost. 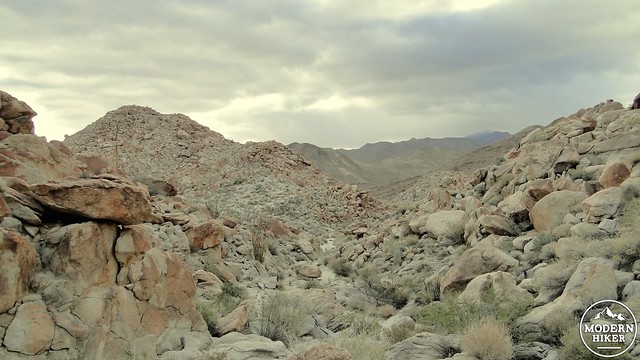 The descent to Rockhouse Canyon 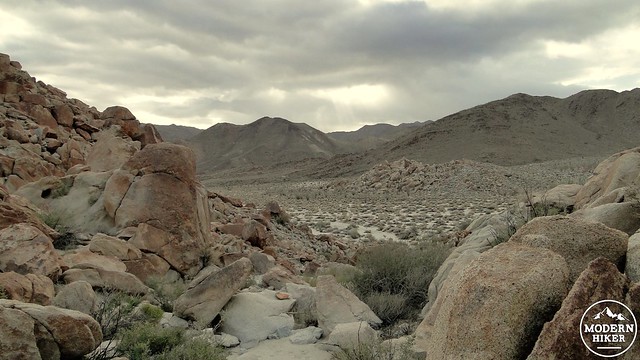 The route will reach an imperceptible divide, after which you will begin a descent down another canyon that will require occasional boulder hopping and scrambling. This rugged wash is similar to the canyon you initially ascended, but if you take time and use caution you won’t have too much trouble.

This canyon will deposit you at the bottom of sandy and expansive Rockhouse Canyon. From here, you will turn right to begin following the wash in a generally westward direction. The sand here is pretty fine, which makes the walking a bit tedious. Fortunately, Rockhouse Canyon is gorgeous in its stark, pristine, silent way, so you shouldn’t have to begrudge the uncooperative terrain all that much. 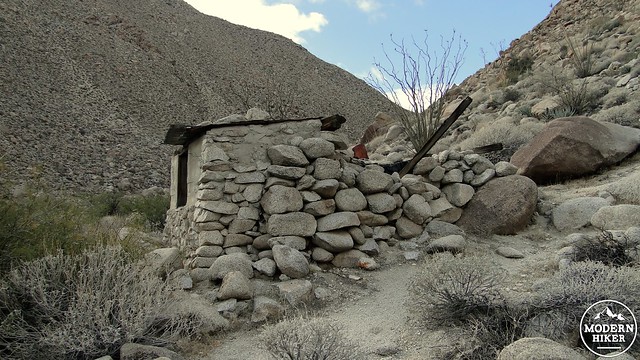 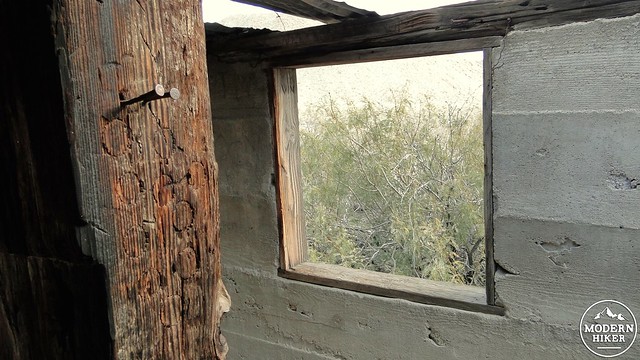 At about 4.5 miles, look for the line shack off to the left (south) side of the canyon. It’s hard to see the shack from the main wash, so it’s a good idea to keep your eyes on your GPS if you are using it. If not, look for a canyon with a fair amount of unusually green vegetation. branching off on  your left. There’s a spring back in this canyon that once provided water for the residents of the shack, and if you’re interested in further exploration, you can fool around back in this canyon. 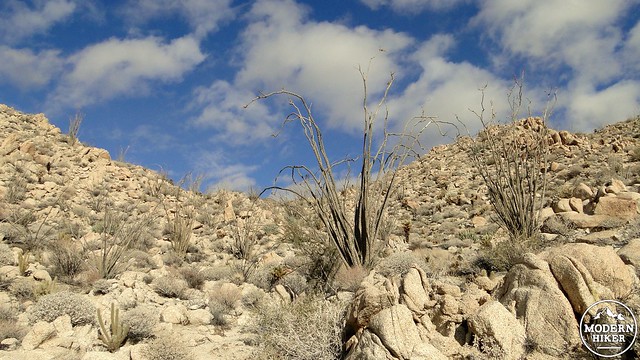 After you’ve enjoyed the usual rusty bedsprings, disentigrating tin roof, and dilapidated masonry, return to the wash and backtrack a little bit to find the rough trail on the north side of the canyon leading up over a low-saddle along the ridge dividing upper Bow Willow and Rockhouse Canyons to begin your return route. This trail was likely once an old Indian trail that remained in use from cattle migrating between the two canyons. As rough as the trail is, it’s probably the best-defined trail on this entire route. 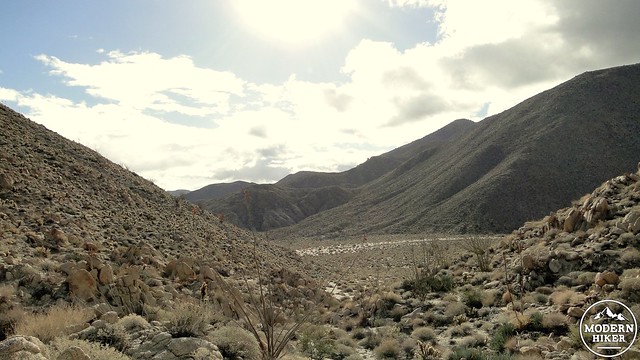 Looking back at Rockhouse Canyon 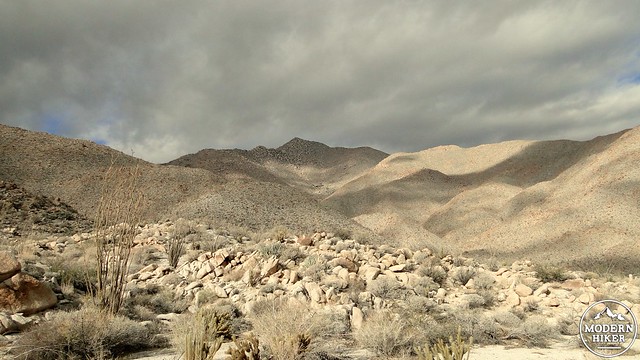 Commence climbing this trail toward the saddle, taking care not to come into contact with some of the hostile vegetation along the track, which includes ocotillo, cholla, and other prickly demon plants. When you gain the saddle, a vista of Bow Willow Canyon, including lofty Sombrero Peak and the distant Sombrero Peak Palm Grove, emerges before you. Carefully drop down the other side of this ridge to end up along the main wash in Bow Willow Canyon. 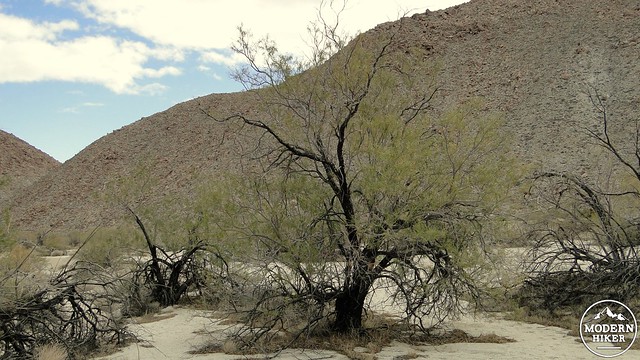 After reaching the wash, turn right to begin follow the edge of the wash. Along this wash, you’ll pass through groves of the small, bushy willow trees that lend the canyon its names. The trees aren’t quite tall enough to provide shade from the sun, but the presence of a little bit of extra greenery is a nice bit of change. The rest of the route follows the edge of this wash as you continue to travel in the direction of the campground. There aren’t any additional junctions, turns, or routes to find along the way, and getting back to the campground is a relatively simple affair from here.

Generally speaking, there is no real trail. =

Bow Willow Campground, which is also the starting point for this hike, is an excellent camping option.

From San Diego, take Interstate 8 east toward El Centro. Exit at State Route 2, which is also called Imperial Highway, and turn left to travel north. Travel 16.1 miles to reach the turn for Bow Willow Road on your left. Follow unpaved Bow Willow Road to the campground and find a parking spot to commence the hike.