Fun fact: This hike is not named “Potato Chip Rock.” The term Potato Chip Rock likely derives from Jerry Schad, he of Afoot and Afield fame. Jerry had a tendency to name certain landmarks that struck his fancy, and if you scour Afoot and Afield, you’ll find a few of his other likely creations: Mile High Mountain, the Domelands, etc. But none of his monikers have inspired quite so much, um, fame, as the name Potato Chip Rock, which applies for a flake of granodiorite that seemingly protrudes into space. The irony is that, product of the pre-digital age that he was, Jerry Schad would have had no idea that a passing nickname placed in a print publication would become one of the most social media-famous spots in all of San Diego. 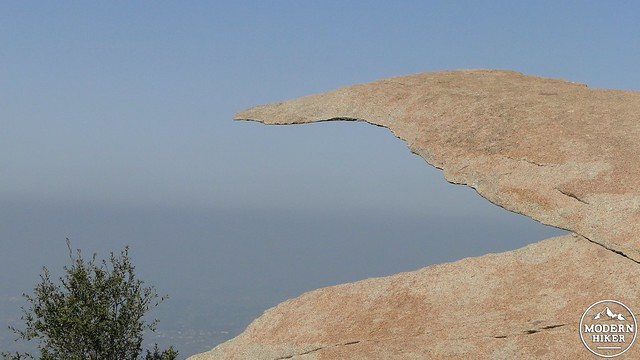 Of course, there’s a lot more to this hike than just Potato Chip Rock, even if people hike it to spend hours waiting in line to take a derivative selfie. Woodson also happens to be the tallest of the peaks in a small complex of mountains that also includes nearby Iron Mountain. Woodson also enjoys a geographic position that affords expansive views across the western half of the countyfrom the nearly 3,000’ summit. In addition to the views, Woodson is also famous for its maze of granite boulders, some of which reach massive proportions or attain fantastic shapes, including the aforementioned Potato Chip.

This write-up covers four possible options to the summit: 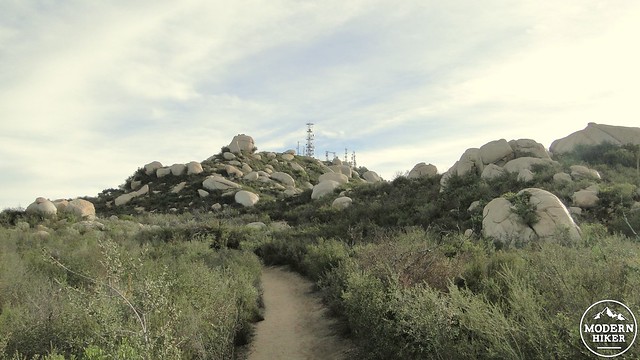 Trail to the summit

Local Native-Americans were reported to call Woodson Mountain “The Mountain of the Moonlit Rock,” which describes the omnipresent and highly reflective white granite boulders. These boulders formed within the earth as part of one massive granite block. However, as the granite cooled, it cracked and broke apart, forming separate chunks. Through the years, water and wind have eroded away the soil, thus exposing the outcrops. Further chemical erosion has rounded the edges by “peeling away” concentric layers of rock in much the same way one would peel an onion apart. This process of spheroidal weathering left many rounded boulders on both sides of the mountain, and these boulders are among the chief highlights of this hike. 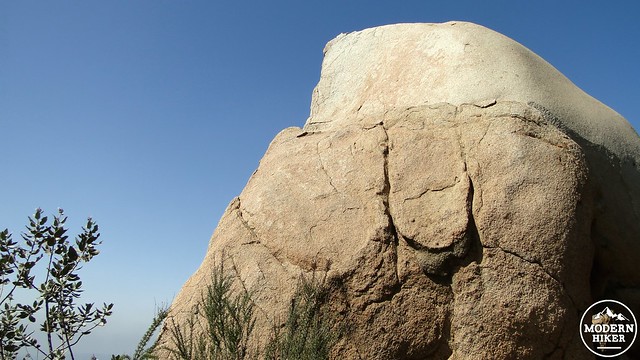 This is a boulder

After the Native Americans vanished or were displaced, the mountain was named Cobbleback Mountain by local homesteaders. The mountain was later re-named in honor of a Confederate dentist named Marshall Clay Woodson who moved to the area in 1895 and, presumably, did a lot of home-steading. A fire lookout tower used to operate here from 1936 to the 1980’s, when it fell out of use with many of the other fire lookouts in the area. This was probably for the best as the array of communication towers would obscure the view and render a lookout useless. 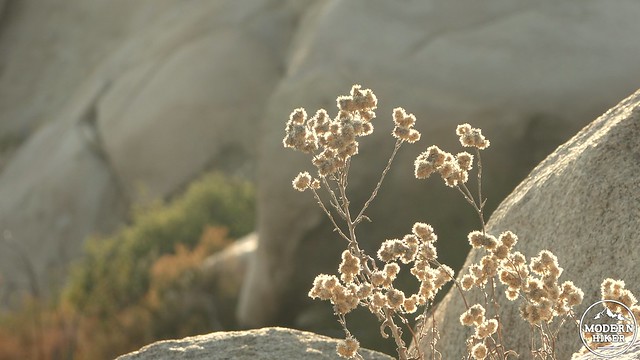 The presence of the lookout towers means that, like Santiago Peak and Mt. Wilson, there isn’t really a true “summit” to be found. There are numerous high points offering views in different directions, but there is no one place to stand and proclaim yourself the temporary sovereign of this land. Chances are that a maintenance building occupies that lofty perch. For this reason, the hike described here will focus on climbing to the Potato Chip, which is where most people stop anyway. For those interested in exploring the summit complex, simply wandering around the paved road and stopping before you start descending down the other side should suffice. 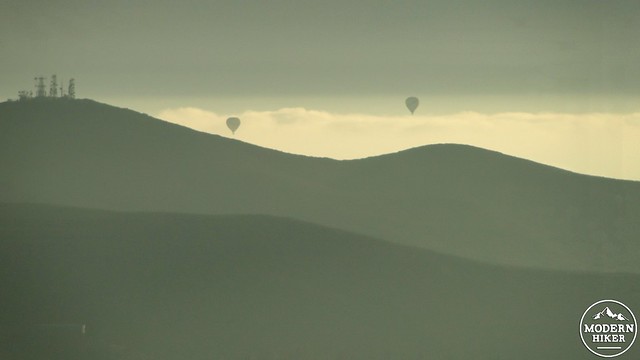 I can already hear the rebuttal from social media on this, but Woodson Mountain is not an easy hike, especially from Lake Poway or from Blue Sky. In addition to steep grades, there is almost no shade, and the heat generated in your body will increase the feeling of the temperature, which can frequently be very hot and very uncomfortable. If you hike Woodson Mountain, like so many other interior hikes, come prepared with adequate water and nutrition. People have died on this trail because they came unprepared for heat. 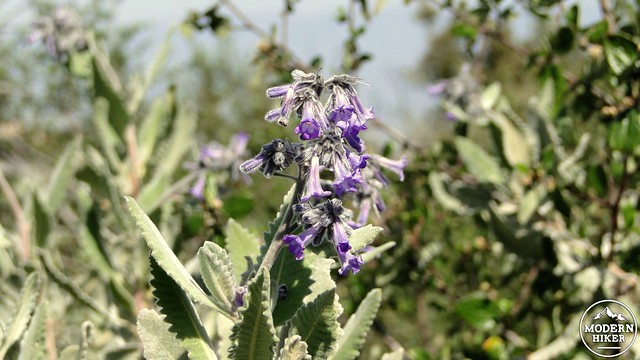 To Blue Sky: From San Diego, take the I-15 north and exit at Twin Peaks Road, turning right. Follow Twin Peaks to Espola Road and make a left. Continue north on Espola Road for 2.6 miles to the Blue Sky Ecological Reserve parking area on the right-hand side of the road.

To the Highway 67 trailheads:

From San Diego, take I-15 north, and exit at Poway Road, and drive east. After 8.6 miles, turn left onto Highway 67. Continue north for 2.6 miles, and find parking along the road. The service road access trail starts adjacent to the fire station. The Fry-Koegel access trail begins about 0.25 mile north – a short distance up Archie Moore Road.

This hike starts from the Lake Poway parking lot. The city of Poway charges non-Poway residents a $10 fee for parking (at time of writing, 11/2019). The lake itself is a popular destination, with its own hiking trails, a large park, and fishing/boat rentals. The trail begins along the west shore of the lake, moving south along a use trail that connects to a fire road. Right off the bat, the Woodson Mountain trail gains a few hundred feet going over a hump on the hillside before descending back down to just above the shore of the lake. Here, you’ll meet a junction with the trail to the summit, which remains a wide, steep fire road until gaining the aforementioned saddle. 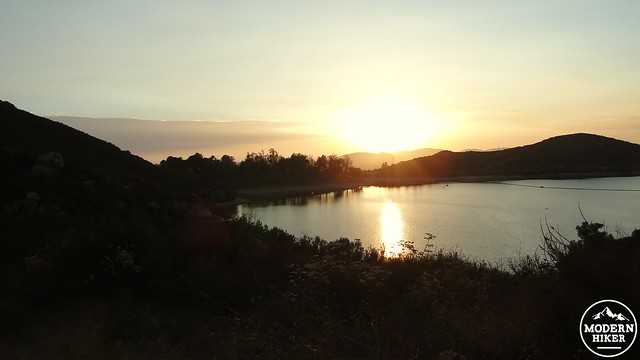 This section of trail is steep and difficult. Your best bet here is to take your time, stopping as often as you need to for a breather or a drink of water. There is no shame in taking a break here, as even experienced, conditioned hikers (such as this writer) have a hard time here (in this author’s case, every single time). The fire road will flatten out for a brief stretch at a junction with another side trail. Keep left. The fire road will keep climbing before flattening out at another side trail signed for Warren Canyon. Keep left here too. 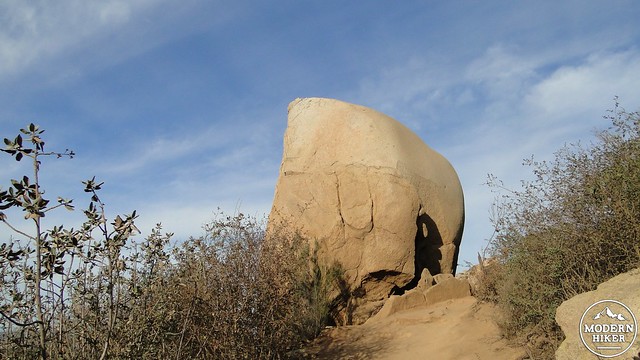 Continue along the Woodson Mountain summit trail, which is clearly marked and easy to follow. At this junction, the fire road is over and done with, and now the trail will begin winding its way through a maze of boulders shrouded in chaparral. Some of these boulders grow respectably large, while others attain interesting shapes. There are a few spots here where shortcutting is possible, but please do not aid and abet erosion by cutting the trails. Nature is doing just fine at that already. 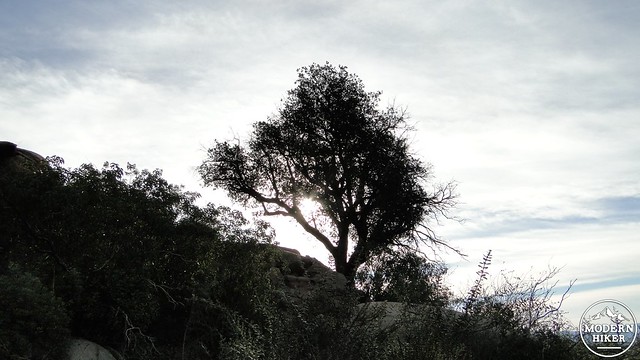 Lone oak on the trail. Sadly, this oak died a few years ago.

At roughly halfway up this path, arrive at the corpse of a lone oak tree jutting out above a  flat-ish rock. This tree once provided a shady respite to hikers, but it died a few years ago. The shade is gone, but the views are still great. . If it’s clear, you will have no trouble picking out downtown San Diego. If you are a little more familiar with the geography, there is no shortage of landmarks looking south, including various neighborhoods and towns from El Cajon to Del Mar, as well as mountains in the Mission Trails area. 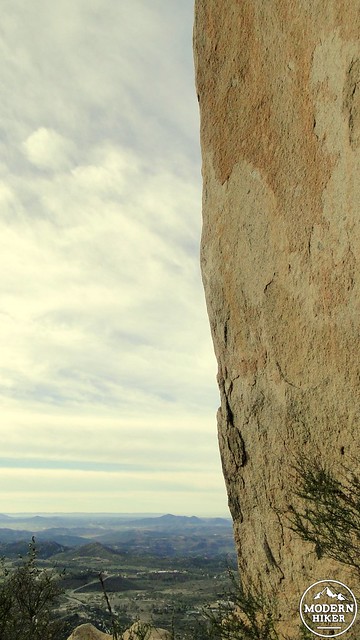 By now, the communications towers should be in view, indicating that the end of the climb is in sight. At the point just before where the trail becomes a paved access road, look for Potato Chip Rock on the left. On any given day, you’re likely to see anywhere from a handful to hundreds of people waiting to pose on top of the Potato Chip for pictures. If it’s worth a few hours of standing around in the sun to take a picture up there, then knock yourself out. However, this is not the summit, nor is it the end of the hike.

The true summit is difficult to determine due to the complex of antennae and associated outbuildings crowding the summit. Any number of boulders featuring solid views should satisfy summit-seekers, and some of these quieter spots are more enjoyable than the hubbub at Potato Chip Rock. 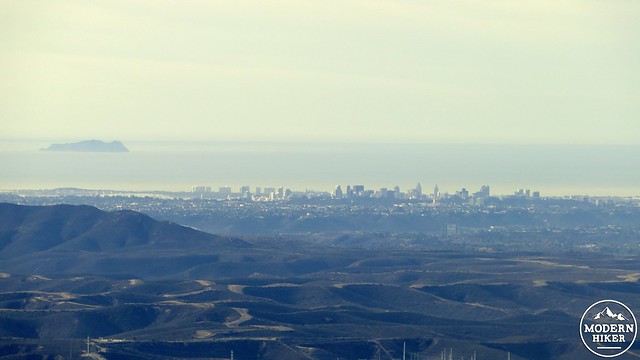 If you want to make this a harder hike, consider starting from Blue Sky Ecological Reserve. This route jumps off to a pleasant start as you follow Green Valley Truck Trail through a corridor of stately coast live oaks. After 0.9 oak-shaded miles, turn right onto a trail that heads south toward Lake Poway. After crossing into City of Poway property, the trail makes a lengthy switchback climb up and over the lake’s dam. From here, continue along the east shore of the lake until you reach the Woodson Mountain Trail at 2.3 miles. Turn left. 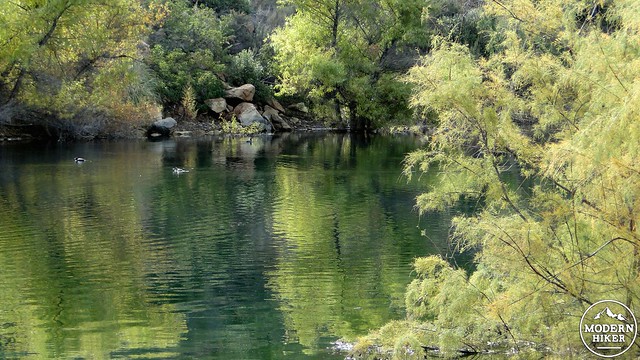 From the shore of Lake Poway

The service road is the shortest, fastest route to the summit. It’s also almost entirely paved, which makes it somewhat lackluster for hiking. On the upside, the road winds through some really impressive boulders, and the views east across Ramona and beyond to the Cuyamacas is pretty great. The trailhead actually starts from a signed spot near the fire station, and you follow a single-track trail through a riparian zone until reaching the service road. Turn right onto the service road, and continue on a moderately steep uphill grade for about 2 miles to the summit. 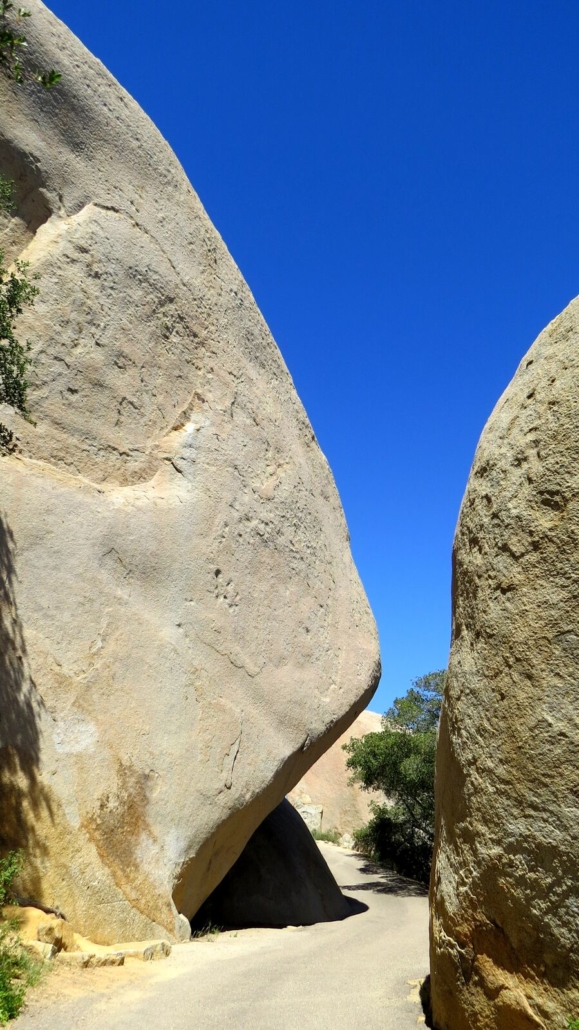 And finally, we’ve got an option for folks who want to avoid the bulk of the crowds on the Woodson Mountain Trail and Service Road. Park at the Highway 67 Trailhead, but instead of walking south on the trail from the fire station, head north along the shoulder of Highway 67. After a quarter mile along the highway, look for a community trail on the left, and join it, walking west behind a series of houses. After 1.2 undulating miles, the trail leaves the houses behind and begins an oblique ascent along the north flank of Woodson Mountain. The cooler, north-facing slope supports oak woodlands (and poison oak), which provides more shade than the other approaches. The trail then begins a steady climb that concludes when the Fry-Koegel Trail junctions with the Woodson Mountain Trail after 2.5 miles. Turn left onto the Woodson Mountain Trail, and follow it east for another mile and change to the summit. 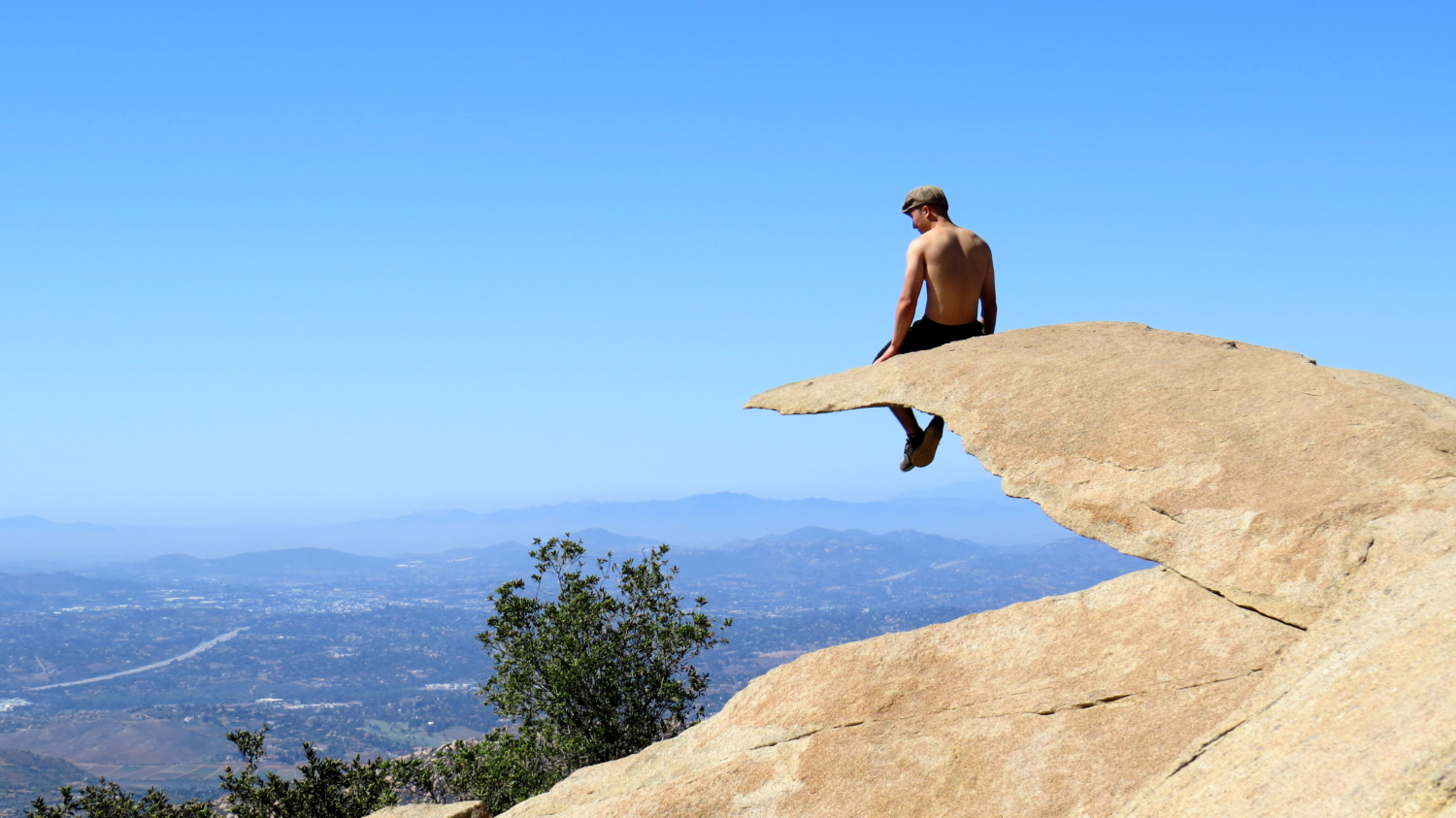 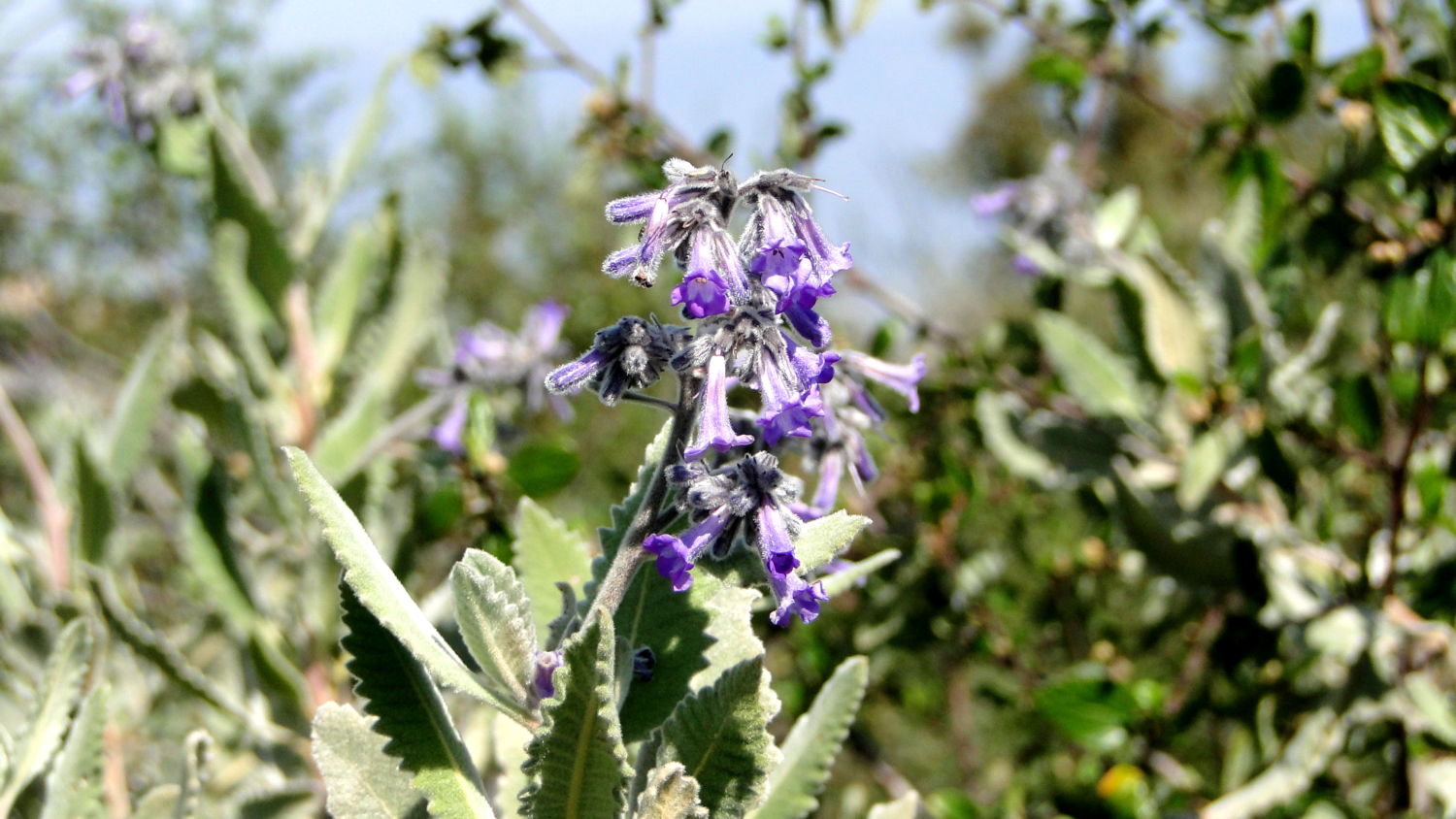 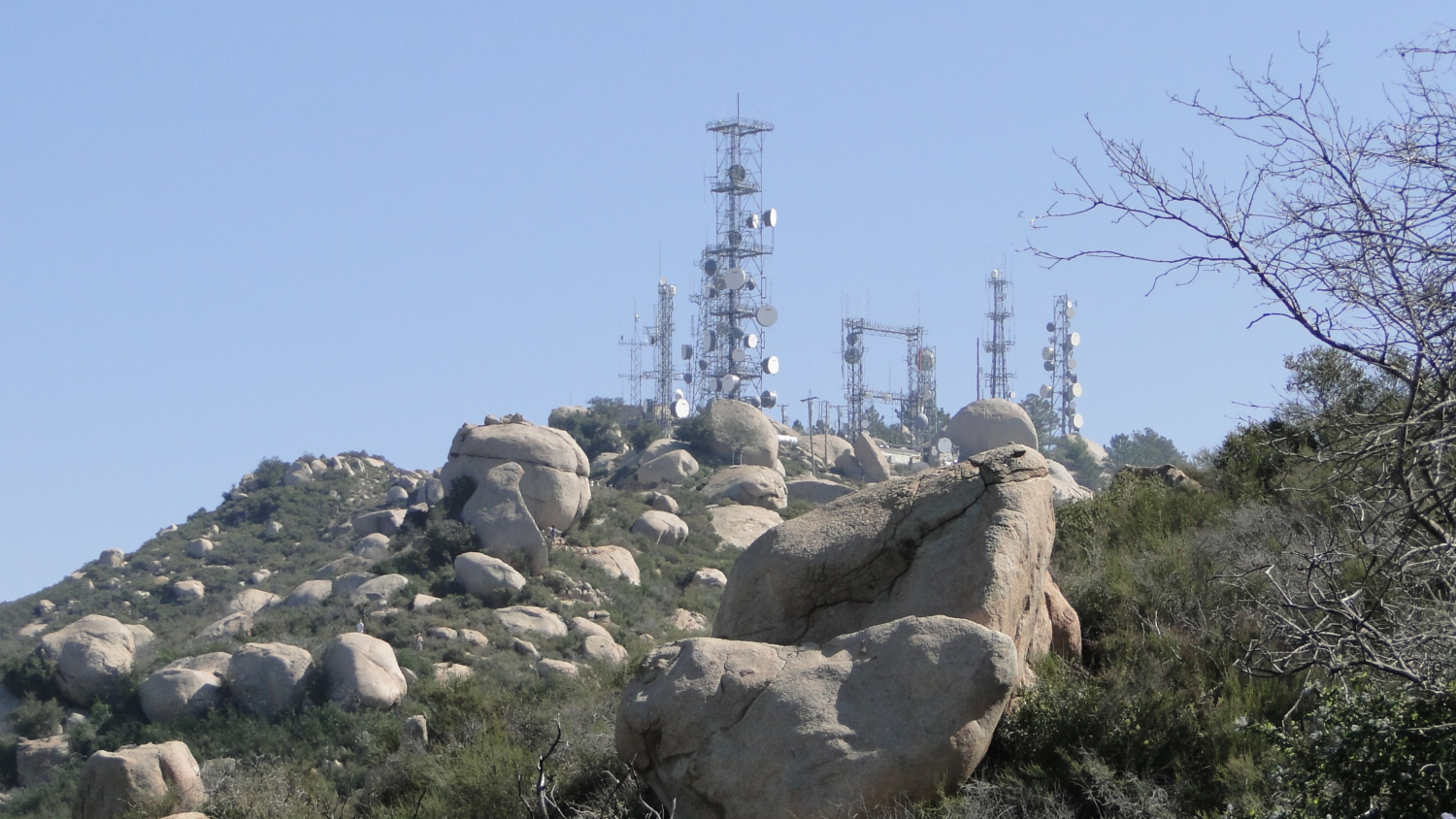 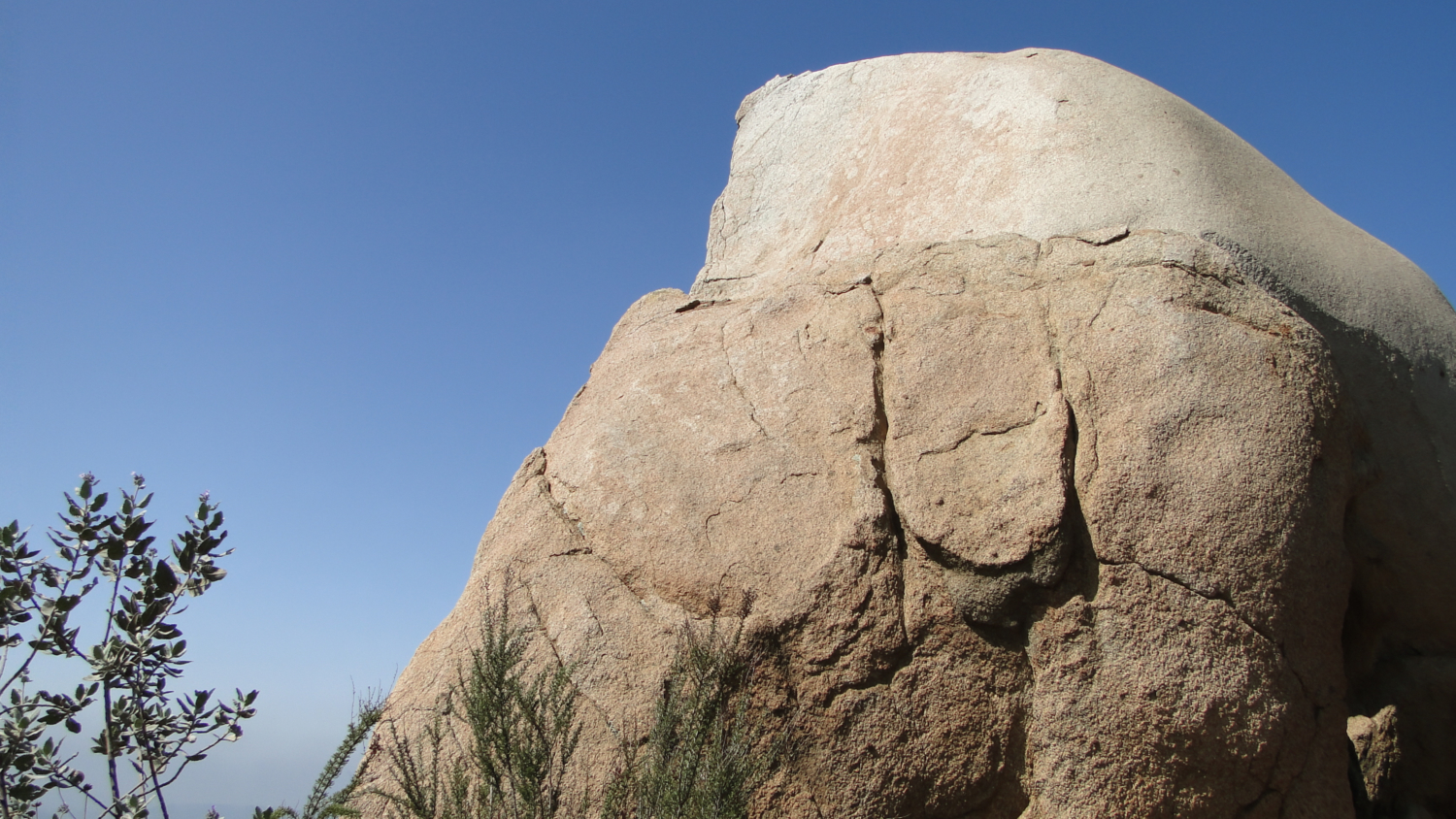 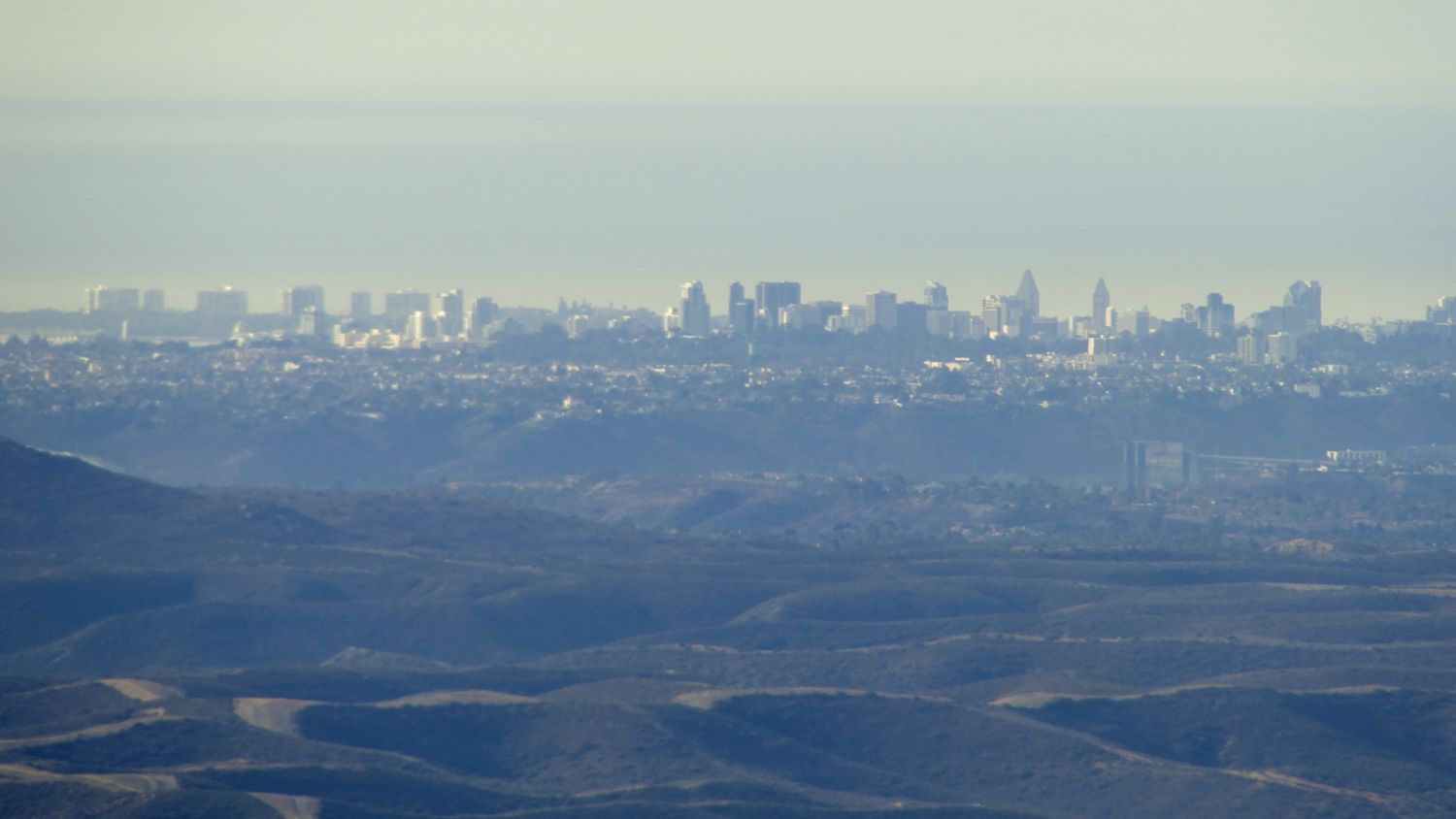 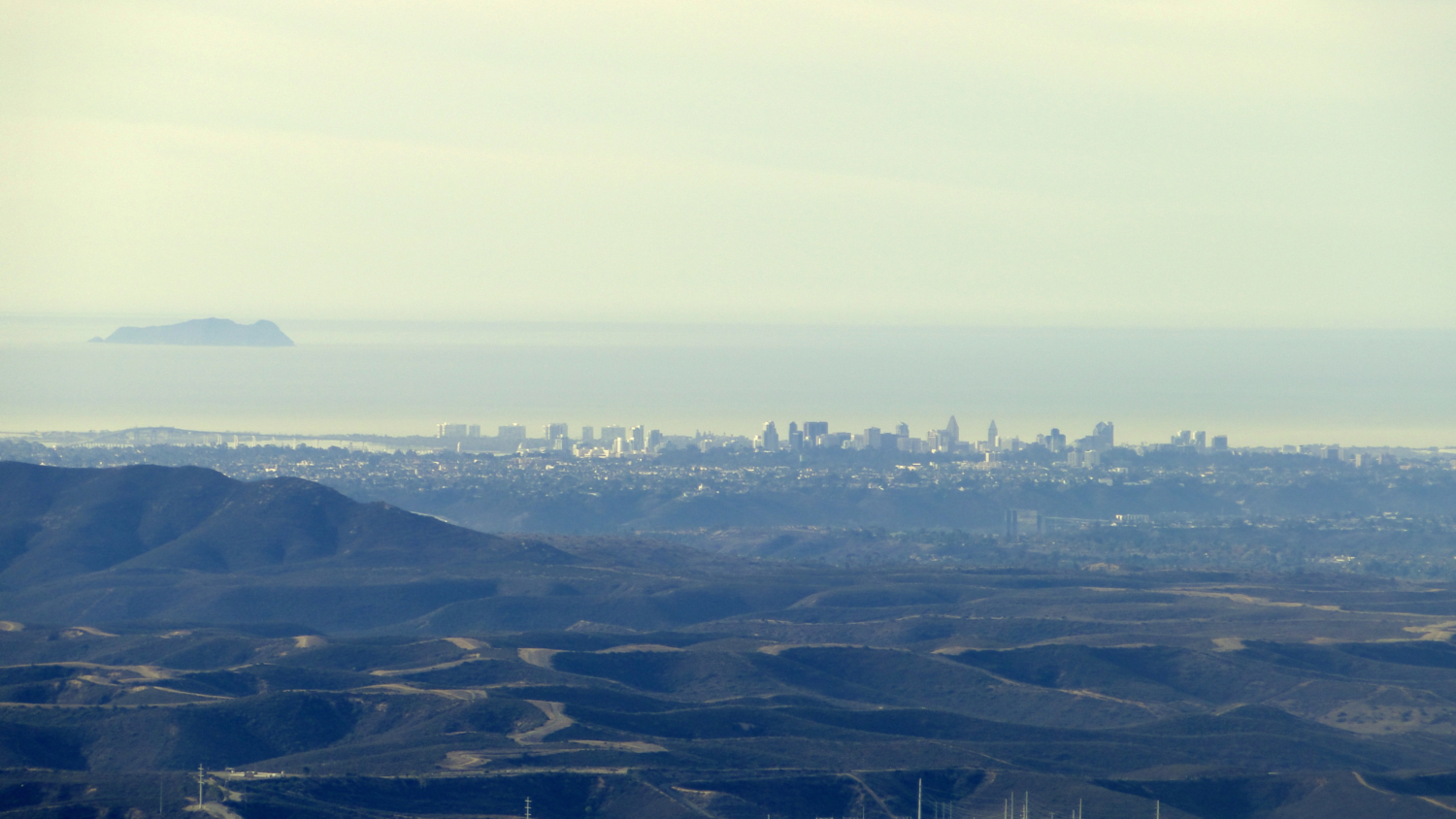 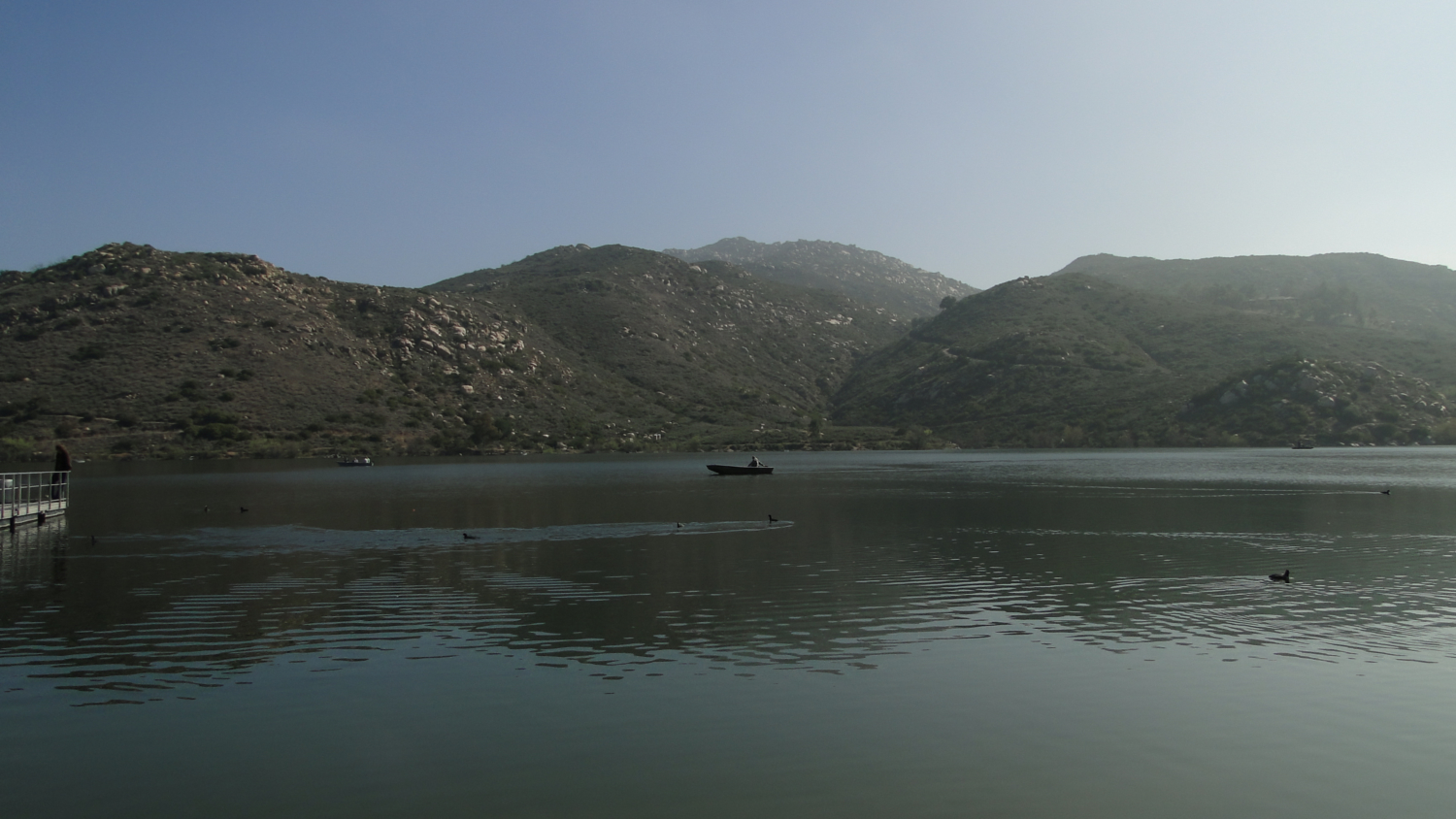 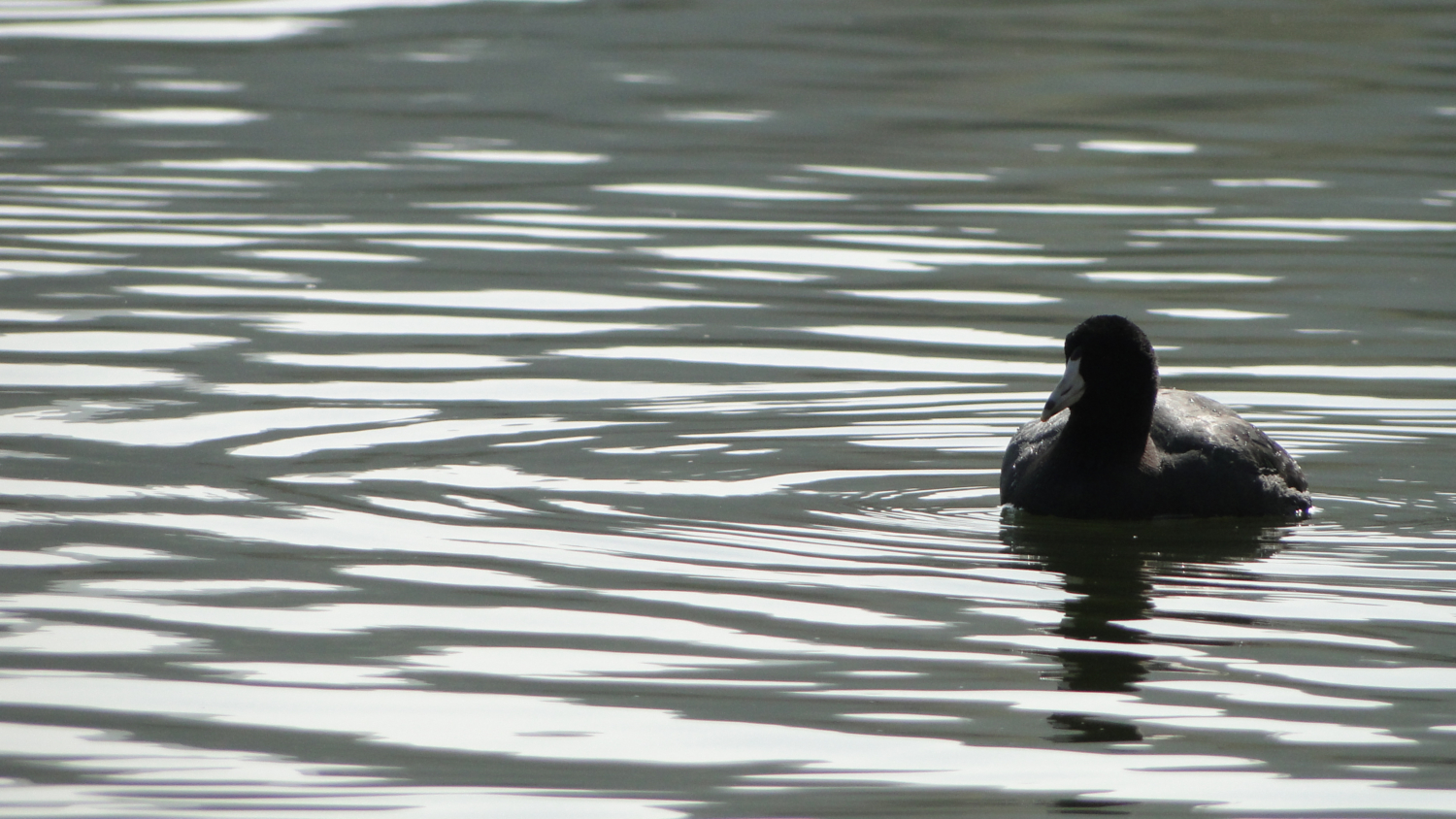 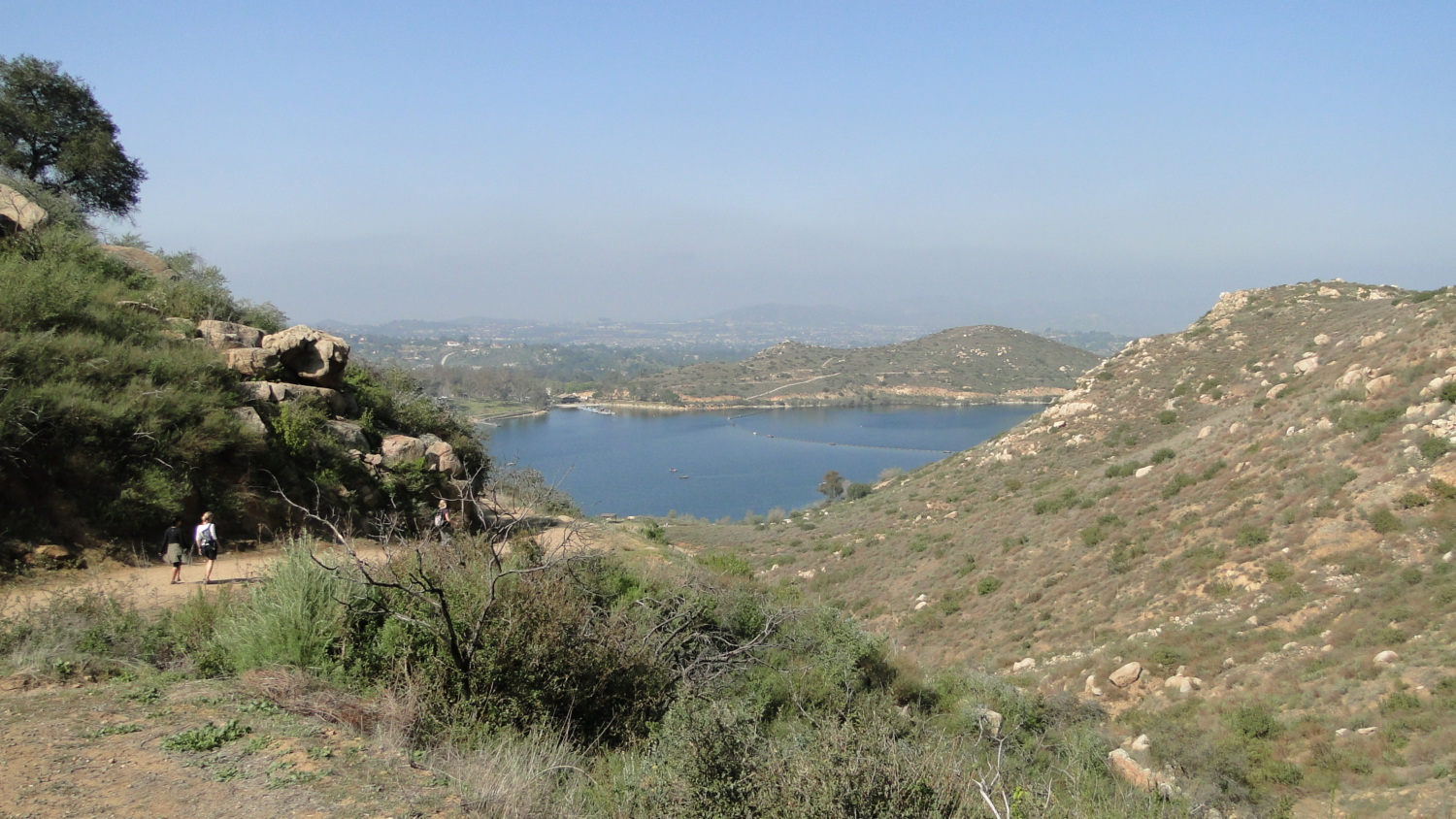 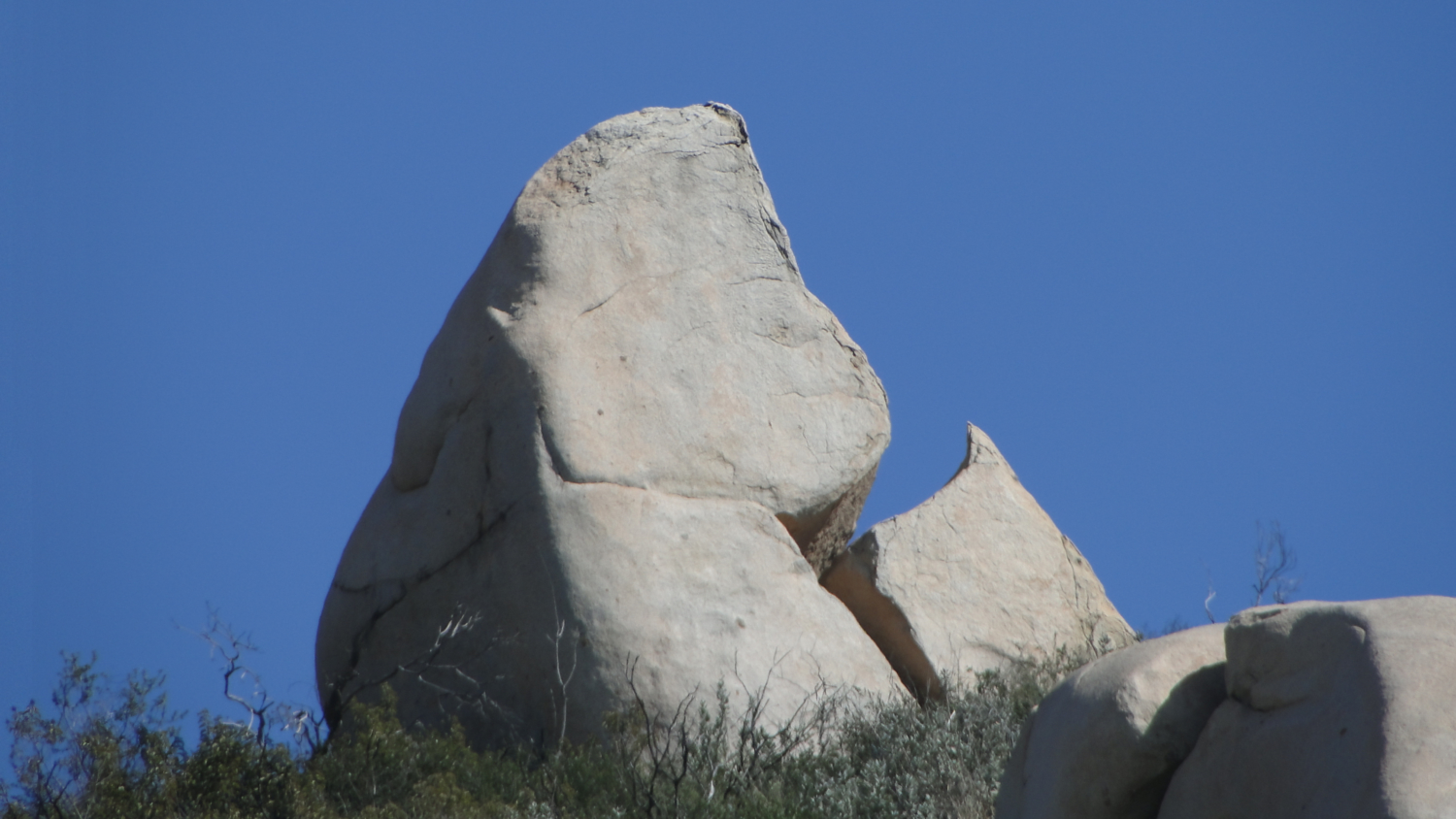 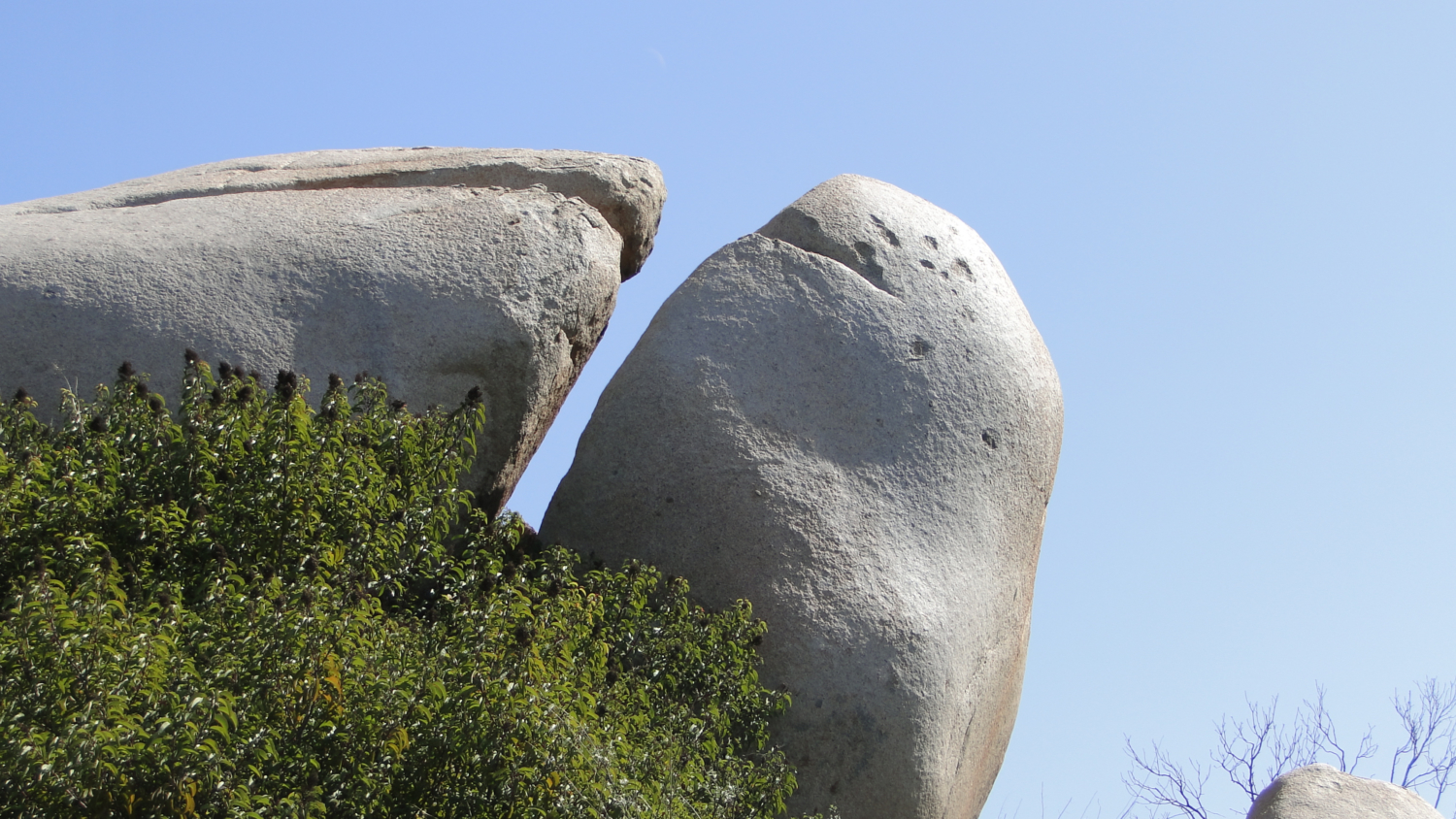 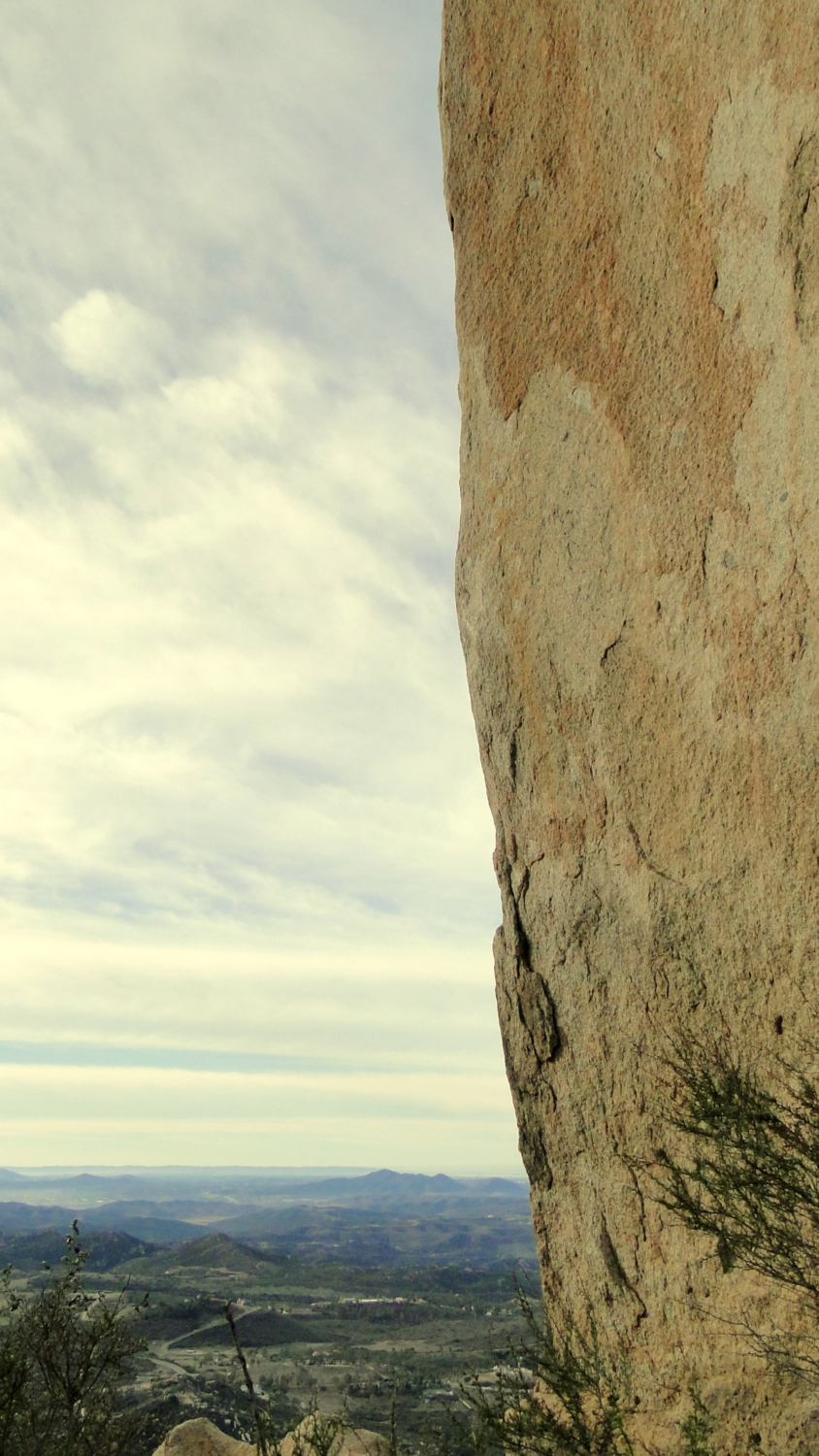 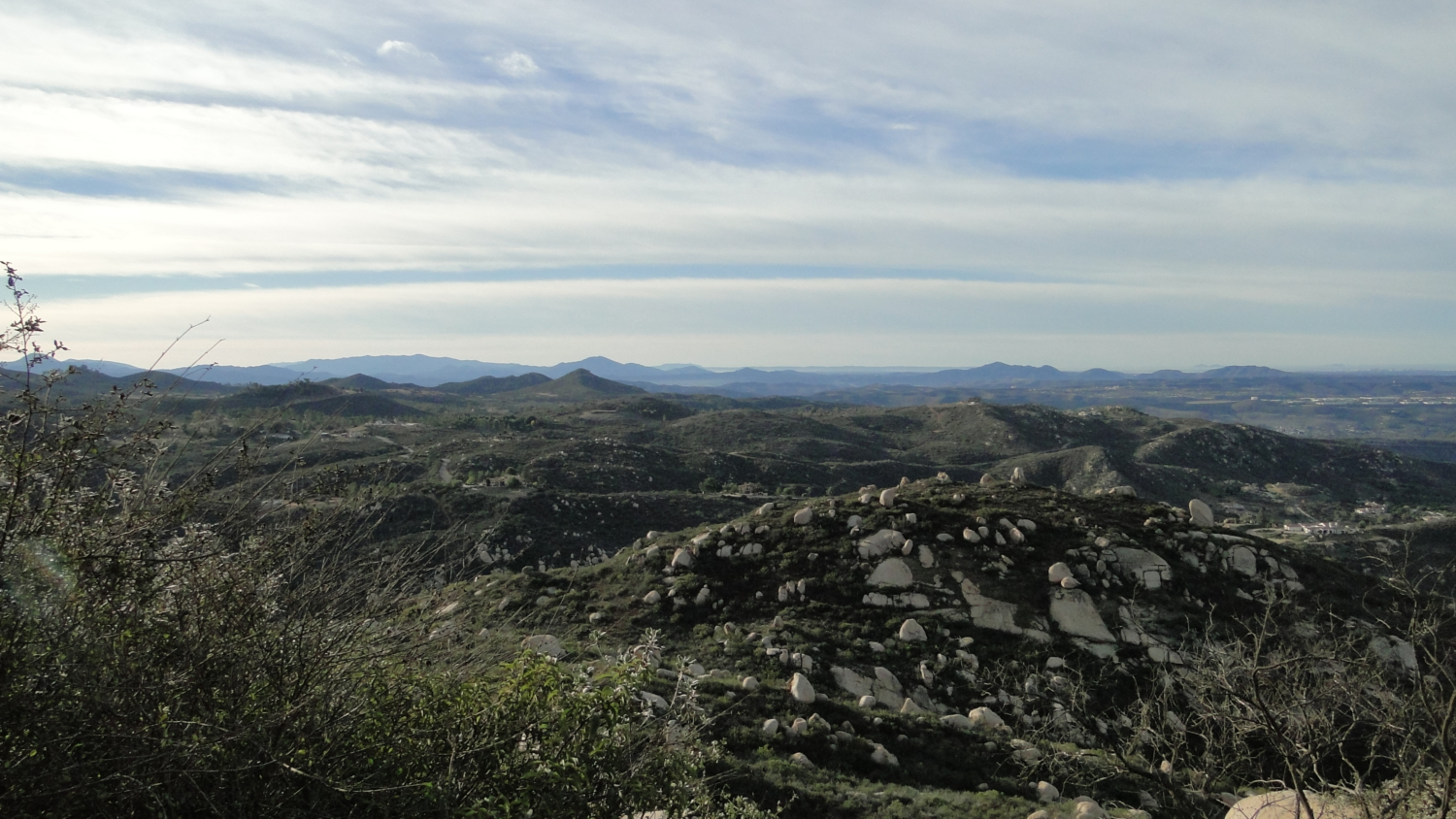 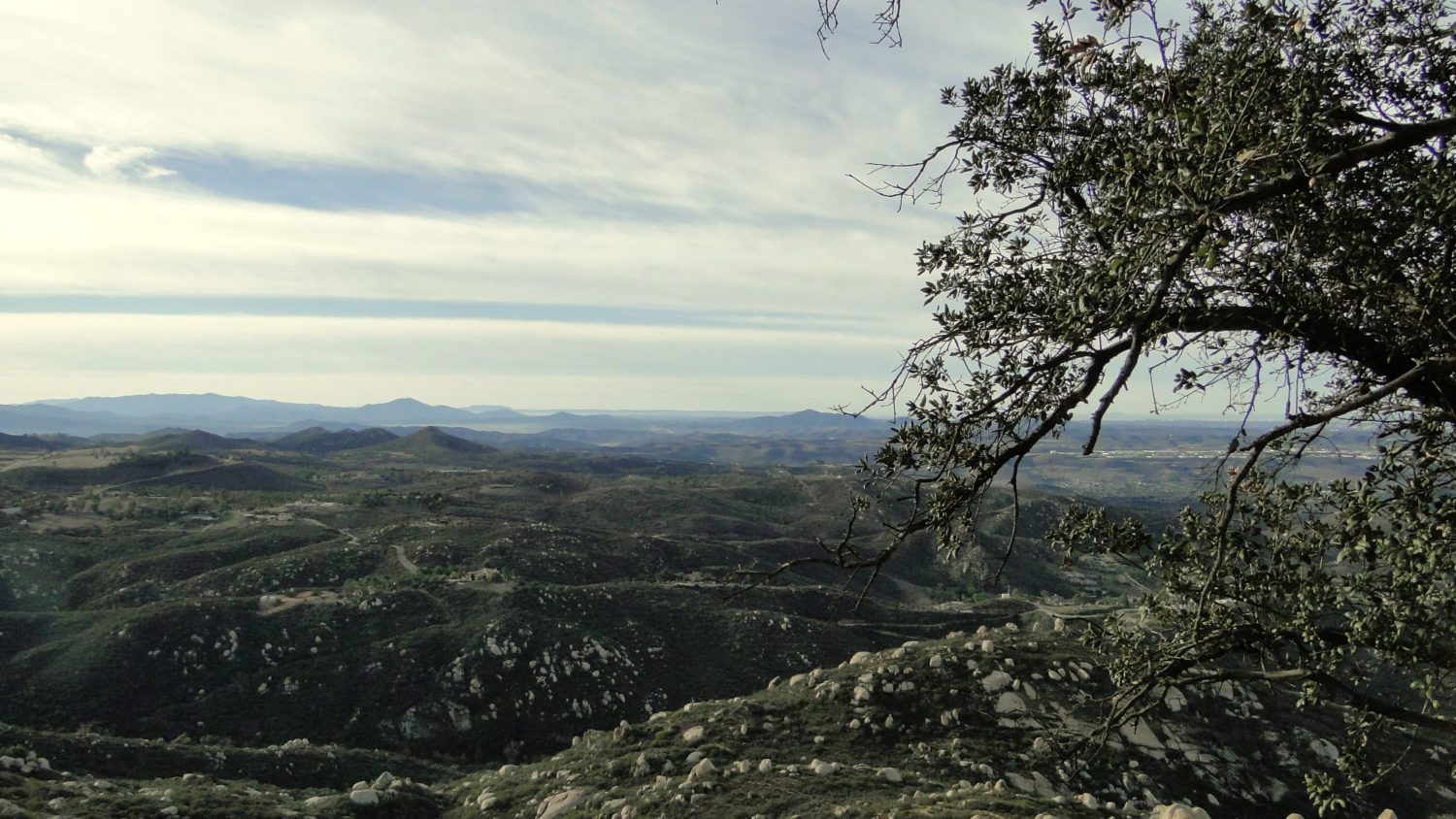 The trail is well-maintained, well-traveled, and easy to follow. The fire road between Lake Poway and the summit trail is uncomfortably steep.

From San Diego, take the I-15 north and exit at Twin Peaks Road, turning right. Follow Twin Peaks to Espola Road and make a left. Just past Poway High School, make a right into the Lake Poway parking lot and concession area. Park near the concession stand after paying the fee. (Note that parking directions for Blue Sky and the east approach are within the text)