“You can tell who the old man is here.” That’s what the elderly gentleman on the trail said as he turned to see me gaining on him as we came up the Sage Trail toward Stanley Peak. The gentleman introduced himself to me as a 70 year-old retiree who had found himself gaining too much weight and was now walking for his health 4-5 mornings a week at Escondido’s Daley Ranch. He told me that there was a time when he could barely walk to the mailbox without feeling out of shape, but now he was able to get in 4-5 miles without too much of a problem. In deep appreciation and respect for somebody pushing his body back into shape at an advanced age, I said “The only old man is the one who’s still asleep in his bed.” 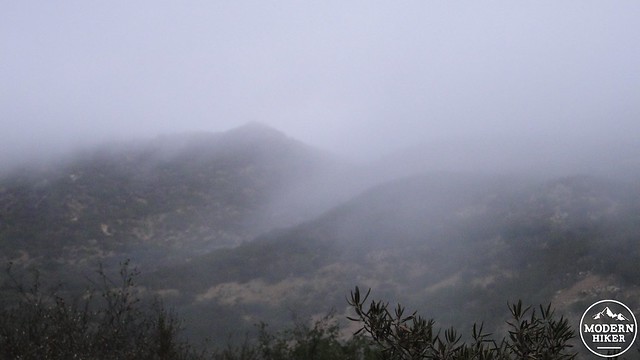 It is impossible not to have a lot of respect for a person to dive so enthusiastically into hiking, and you can expect to encounter folks like this among the long parade of hikers pushing through their Sunday morning sleepiness to reach the 1,983′ peak and its expansive North County views. You will also see chaparral-covered slopes, oak woodlands – including some rare Engelmann oaks, a large meadow, and a rocky peak with excellent views over the north half of San Diego that stretch as far north as Cucamonga Peak. 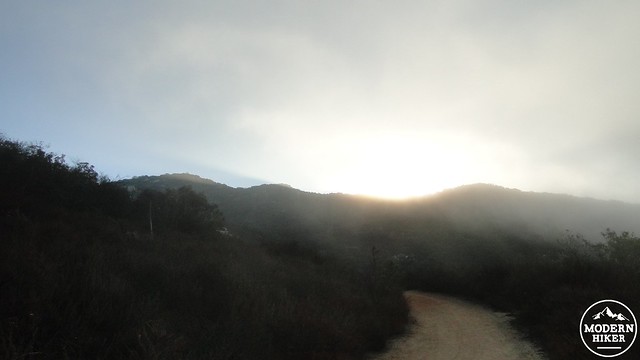 Sun breaking through the marine layer

While many people attempt Stanley Peak from the park’s main entrance at La Honda Drive, this trip starts from the less-visited but no less-scenic  Caballo Trail near the Escondido Humane Society complex. The Caballo Trail starts out by switchbacking up the side of a hill through fragrant chaparral. You’ll see some short-cutting, as well as a sign that requests you avoid adding to the shortcuts, the process of which erodes the hillside and ruins the trail. As the trail climbs up into a small canyon, it will pass a few side trails that either lead nowhere or are officially closed. As long you continue to go straight and avoid turning onto one of these overgrown “illegal” trails, you will do just fine in reaching the next junction. 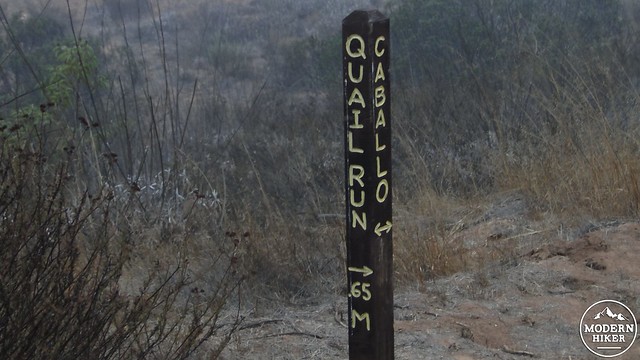 At around 1.1 miles, the Quail Run Trail will branch off from the Caballo Trail and begin making its way up the ridge. This pleasant stretch is a nice break from the wide double track  you’ll spend most of your time on. The .6 mile Quail Run Trail is a nice shortcut between the Caballo and Sage Trails, which meet further south. Taking this option shaves 2 miles off of the hike. By this point, views to the peak should continue to improve unless you come on a cloudy summer or spring day, during which your head will be firmly entrenched in the marine layer clouds.

When Quail Run connects with the Sage Trail, you’ll make a right and then begin a gentle climb up to one of the lovelier corners of the park. This is also where you are most likely to encounter the bulk of your fellow hikers, many of whom take the Sage Trail from the La Honda trailhead and then loop back to the ranch house. It should be noted that Daley Ranch is also extremely popular with mountain bikers due to its numerous hills and extensive trail network. The Sage Trail gets a lot of mountain bike traffic, and while the mountain bikers here are generally pretty respectful and mellow due to the large volume of hikers, you still need to keep an eye and an ear out for them lest they shock you coming around a corner. 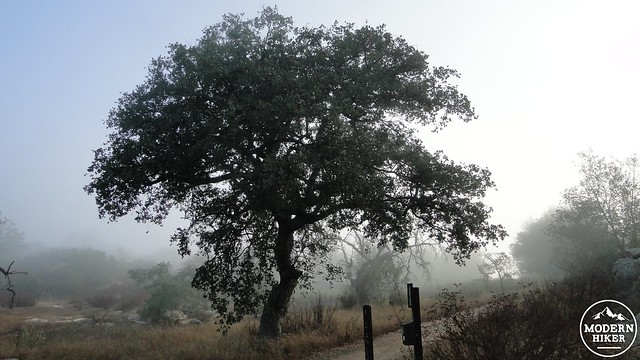 At the junction to Stanley Peak 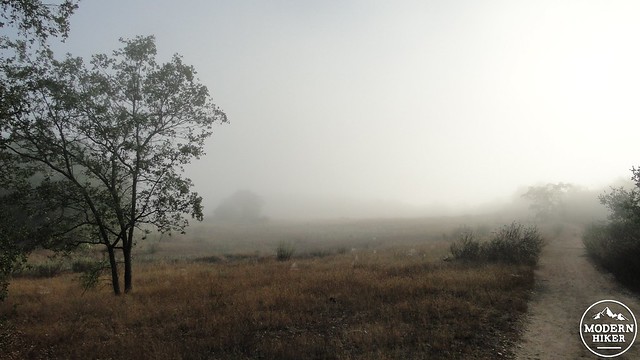 After this climb is finished, the Sage Trail will come over a bump and begin a lengthy flat stretch along a sparse oak woodland before reaching a junction with the Stanley Peak Trail. At this junction, which is marked by a lovely Engelmann oak, you will turn right and immediately enter an expansive meadow dotted with Engelmanns and coast live oaks. This beautiful spot takes on an eerie character when the marine layer has socked in the park, and it is a rare treat to watch the marine layer evaporate on a warm summer morning. 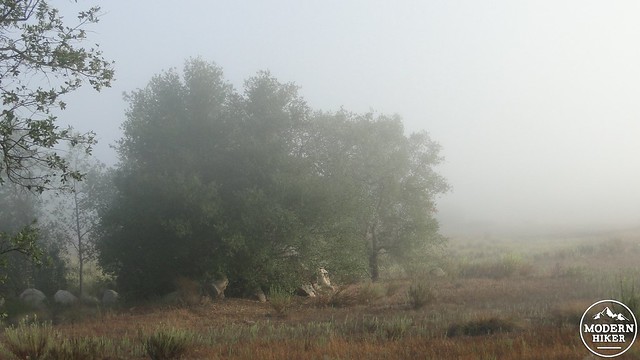 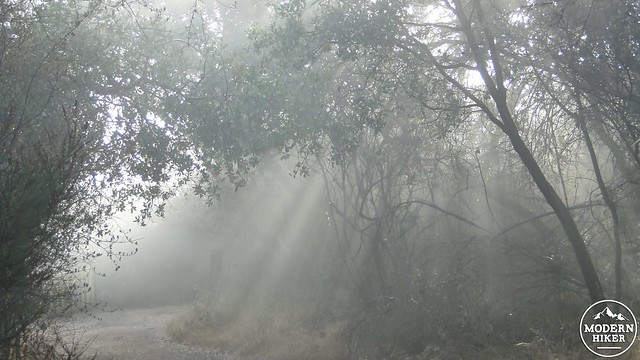 At the north end of the meadow, the trail will make a bend to the right at a gate that’s been erected to prevent further travel along the meadow’s north end. This is to restore the habitat at the meadow. You’ll also see a gate indicating private property on the left. Continue on the sometimes rough double track trail as it begins to climb in earnest for the final push toward the peak. The trail will wrap around the backside of the peak and then emerge at the jumble of boulders and stunted oaks on the summit. A pair of signs indicating landmarks will greet you, as will several flat boulders from which to survey the surroundings. Looking north, you’ll see the Santa Ana Mountains, with Cucamonga, Ontario, and Bighorn Peaks way off in the distance (when it’s clear). 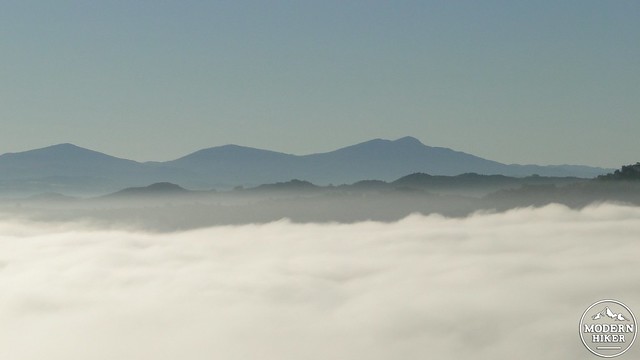 North, Middle, and Cuyamaca Peak, from left to right 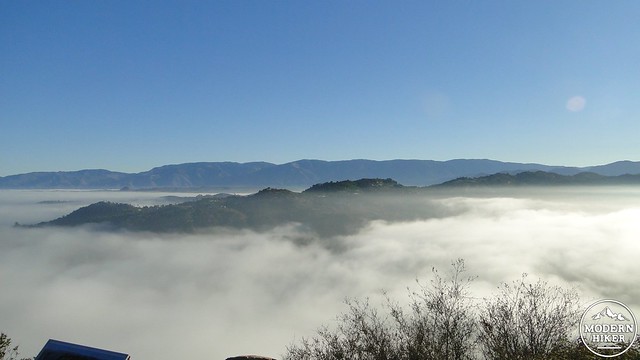 Looking east, you will see Agua Tibia Mountain, the Palomar Range, the top of Rodriguez Mountain, Ramona’s Black Mountain, and a small bit of the Volcan Mountains. Looking south, Mt. Woodson and the Cuyamaca Mountains are prominent. This is the extent of what I am certain you will see as both of my trips up Stanley Peak have occurred during thick cloud covered that only partially burned off during my time on the summit. I suspect you will also see the west half of North County and the city of Escondido sprawled out below your feet. 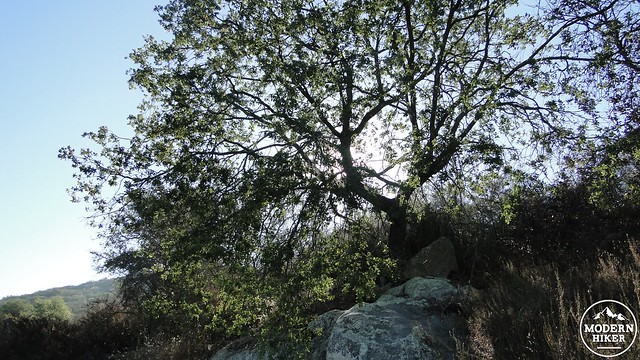 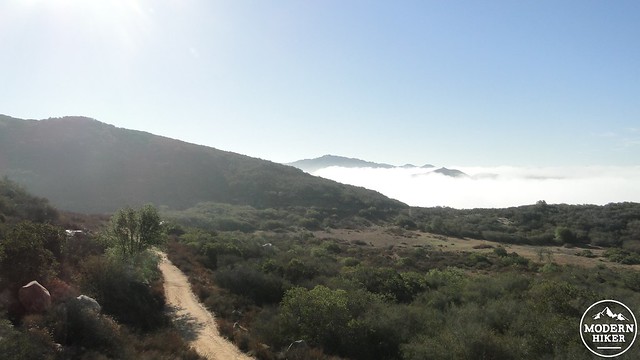 When it comes time to depart this lofty perch, you will retrace your steps, making lefts onto the Sage Trail, the Quail Run Trail, and again on the Caballo Trail. I highly recommend getting an early start on this one, especially during the summer when  the afternoon heat is almost unbearable.  This is a popular and highly traveled trail, and it’s not uncommon to see caravans of mountain bikers 20-deep. Good on them for getting out in the sunshine, but you may find it is better on you to beat them to the top. Early bird gets the top of the world to him or herself. 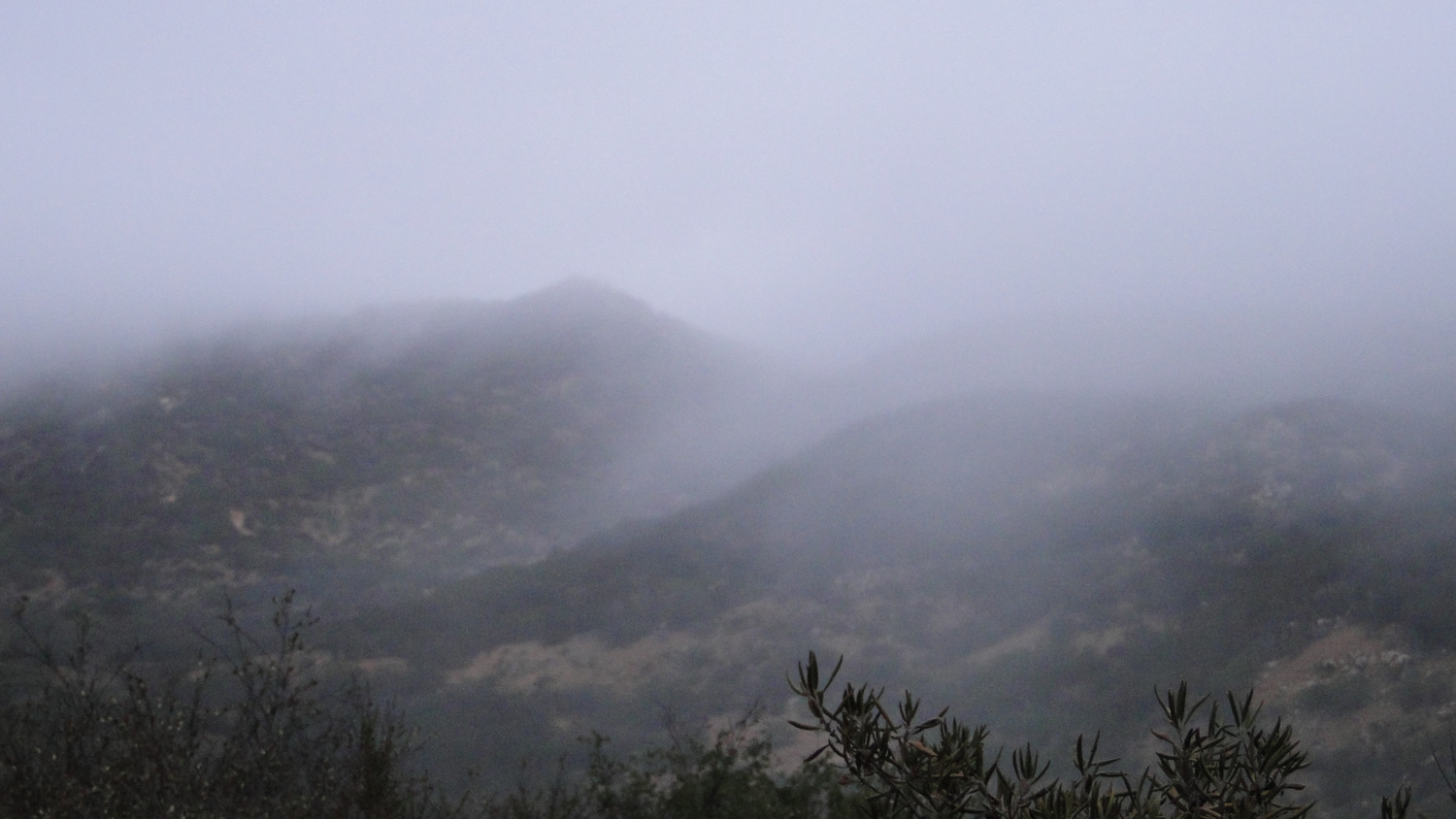 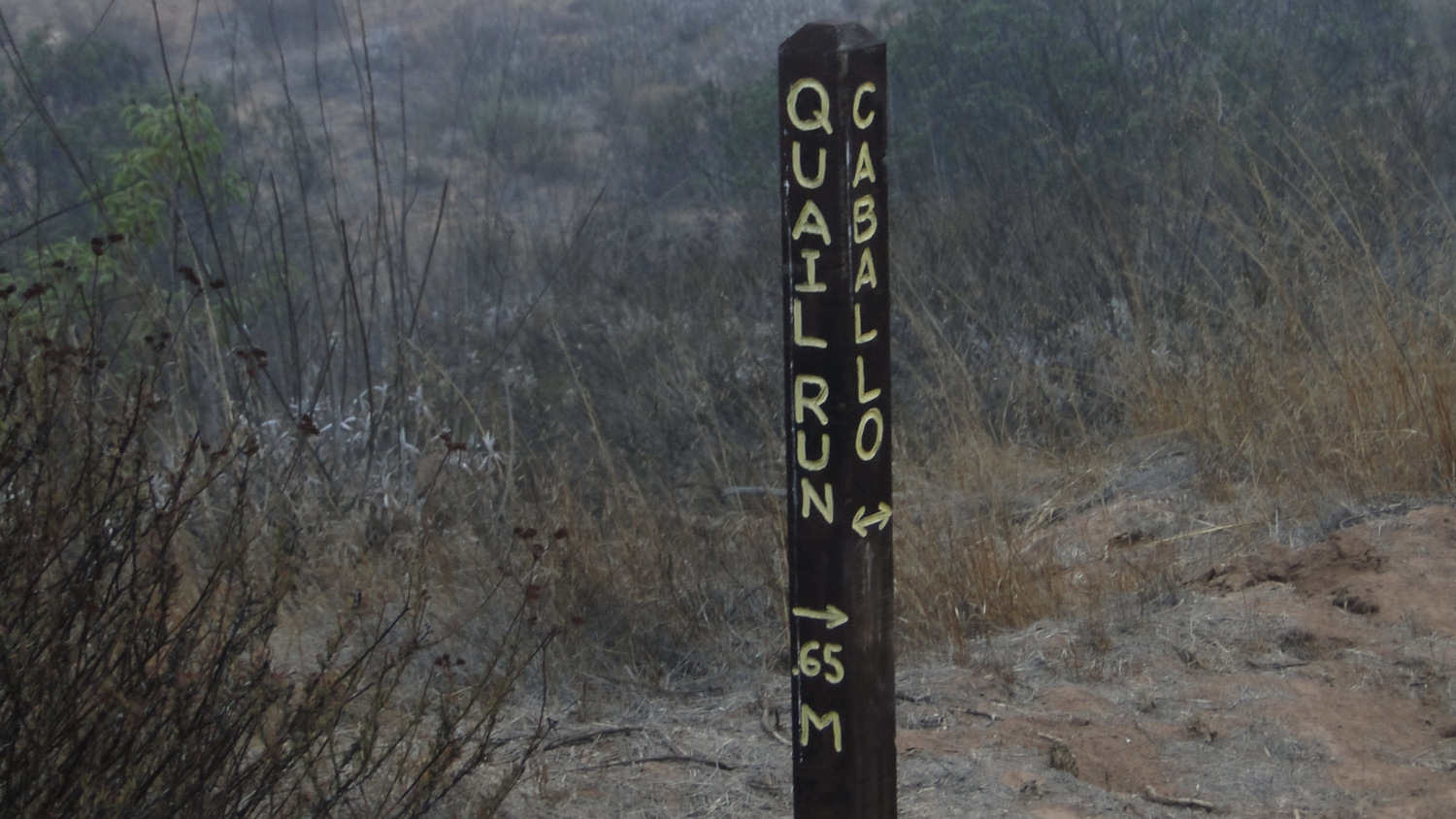 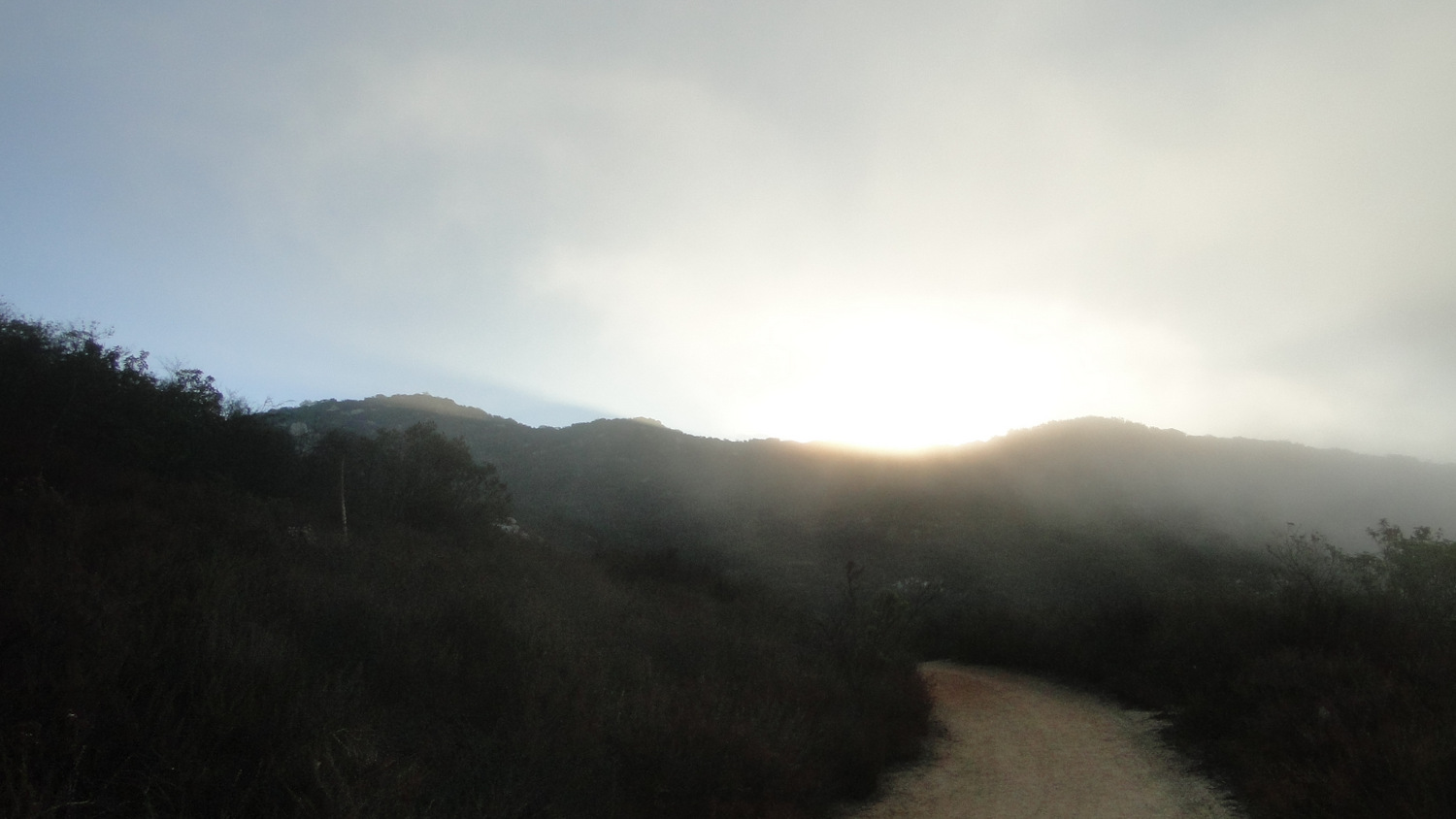 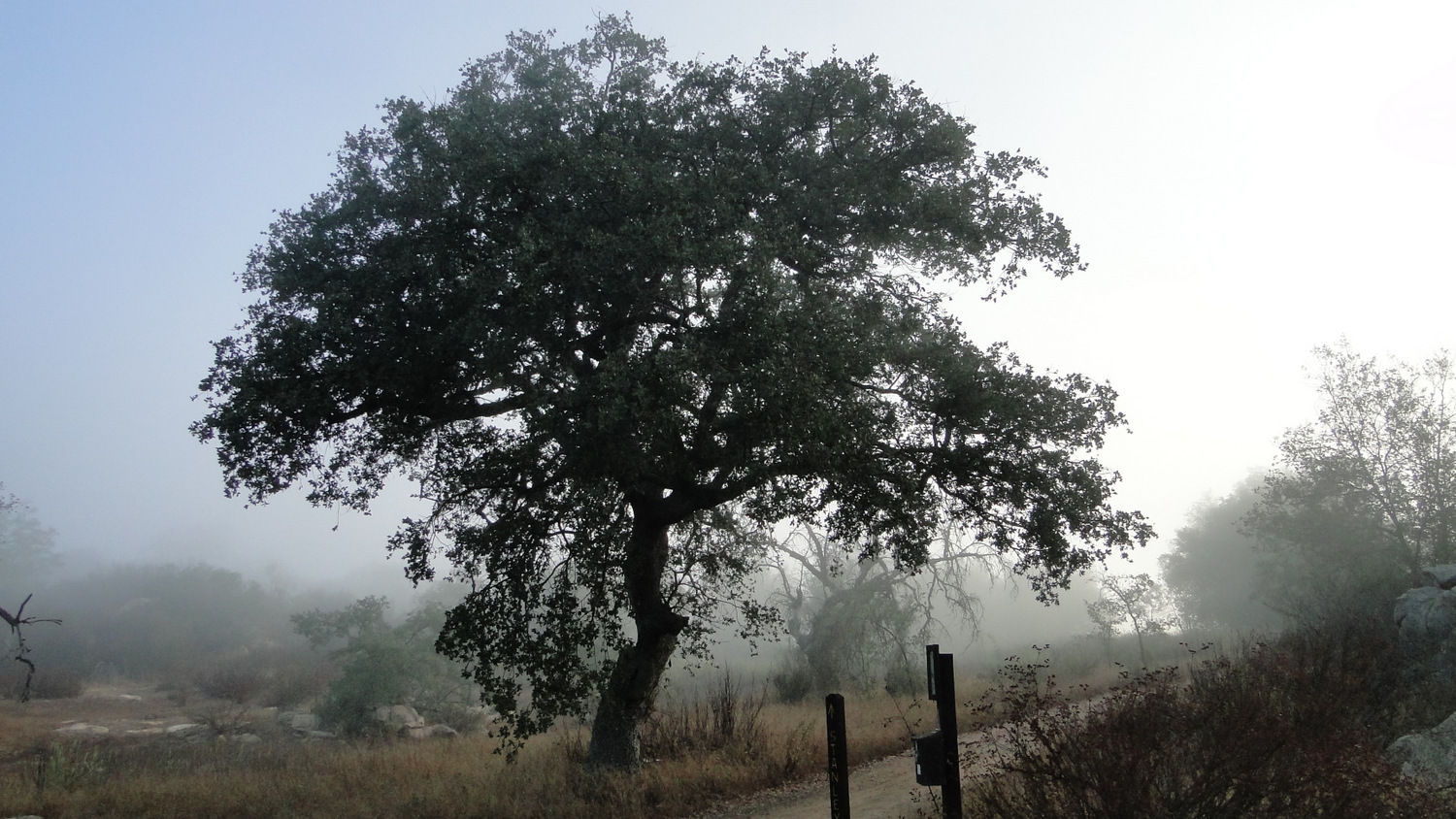 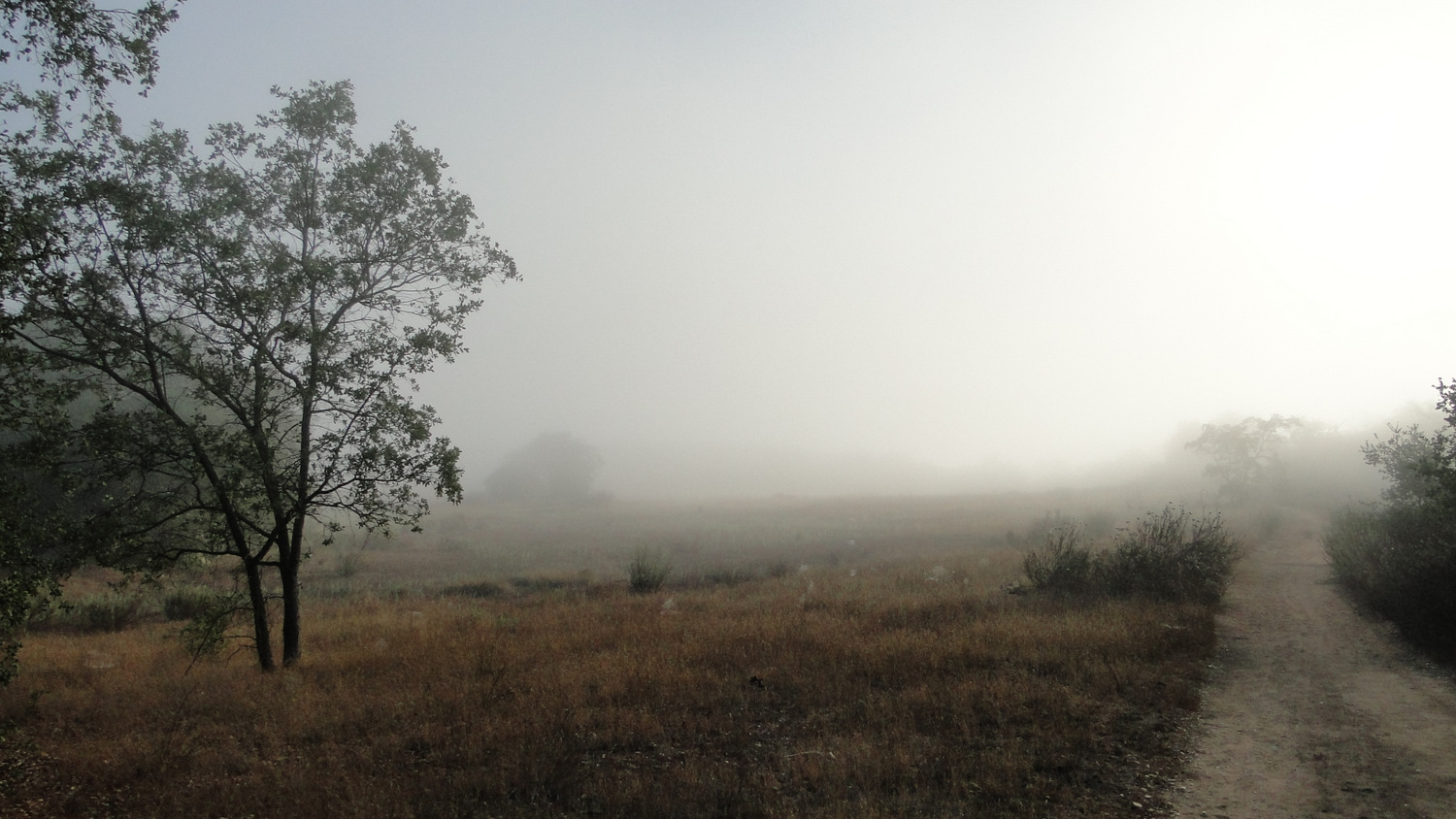 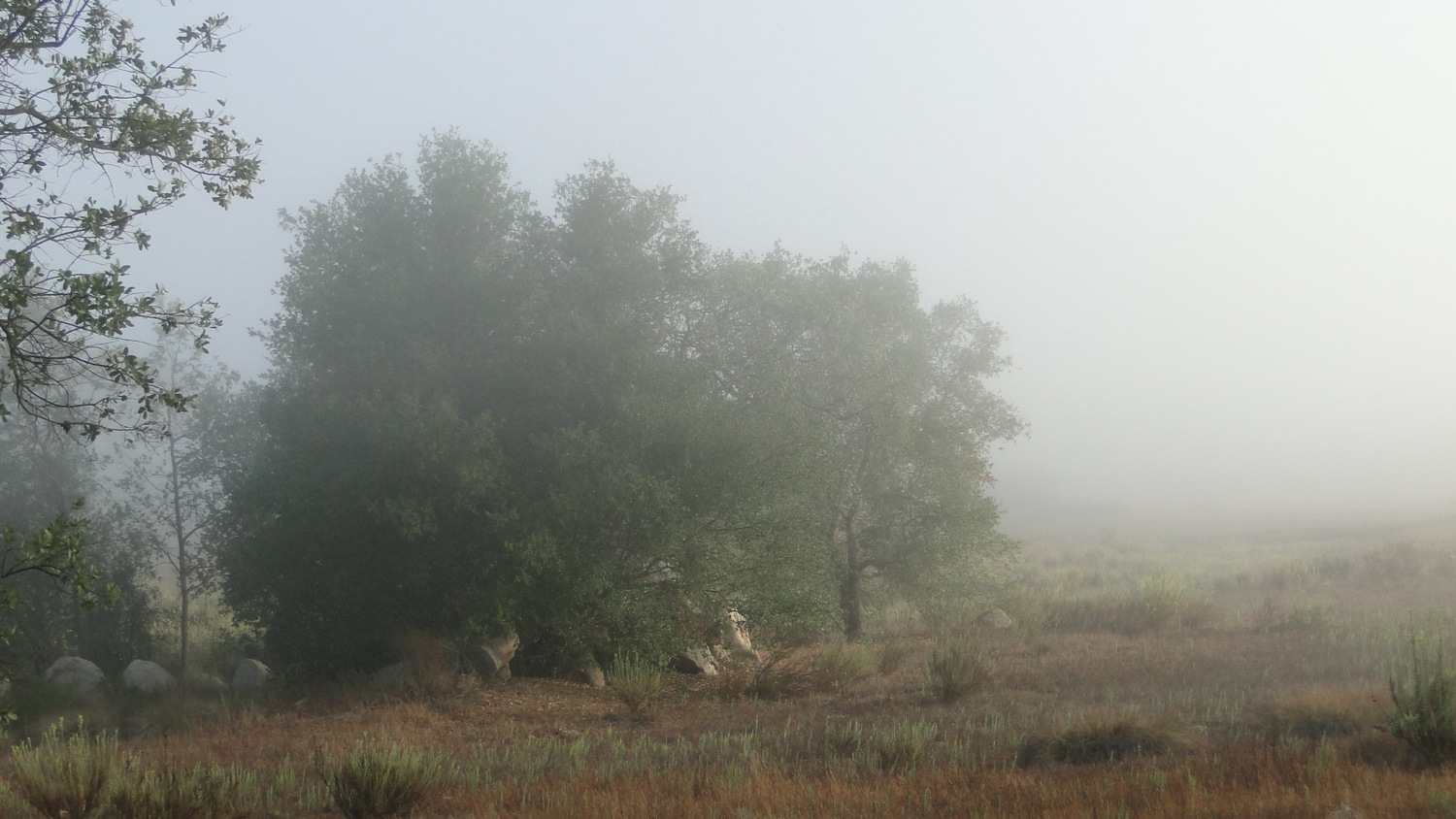 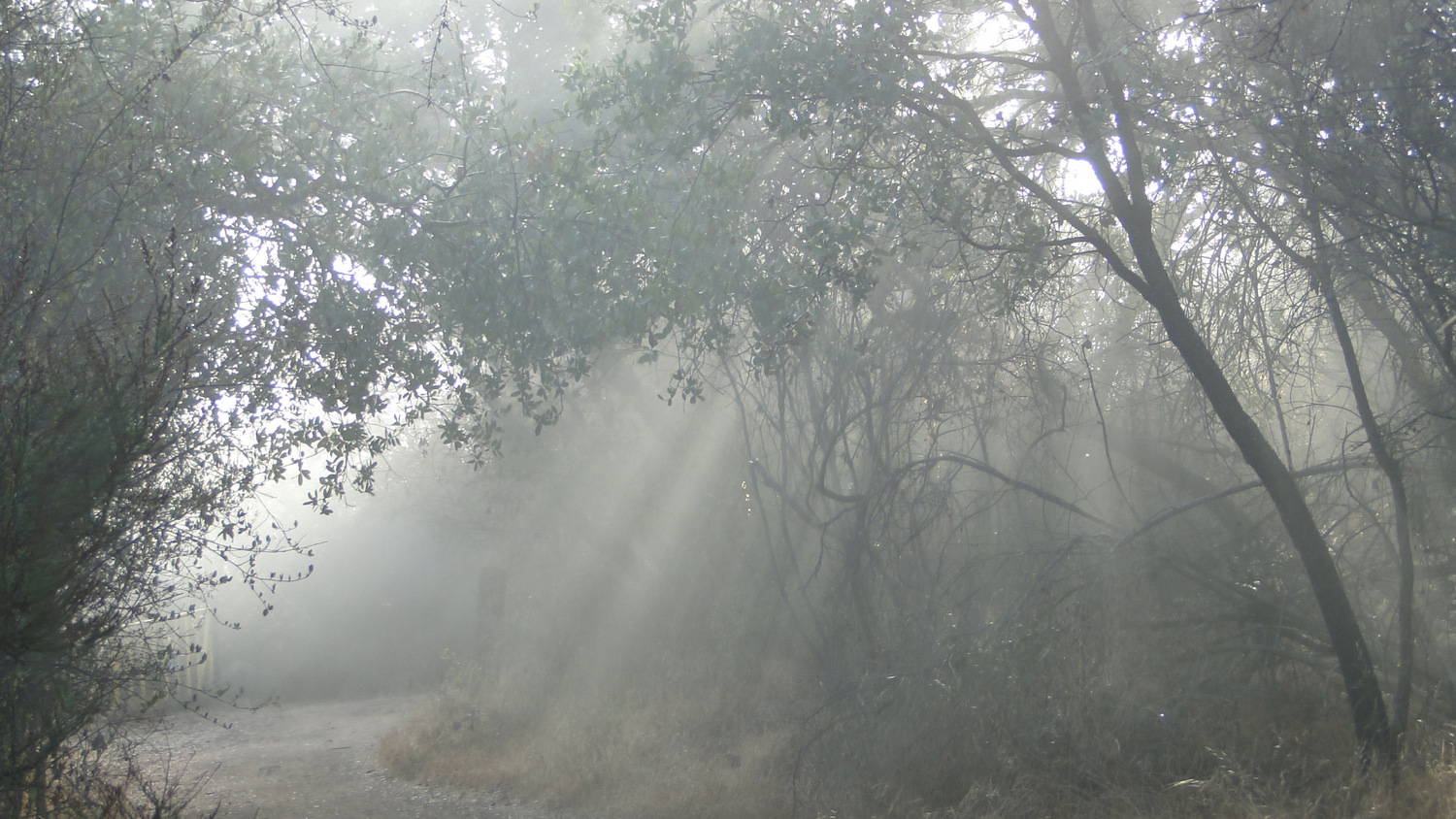 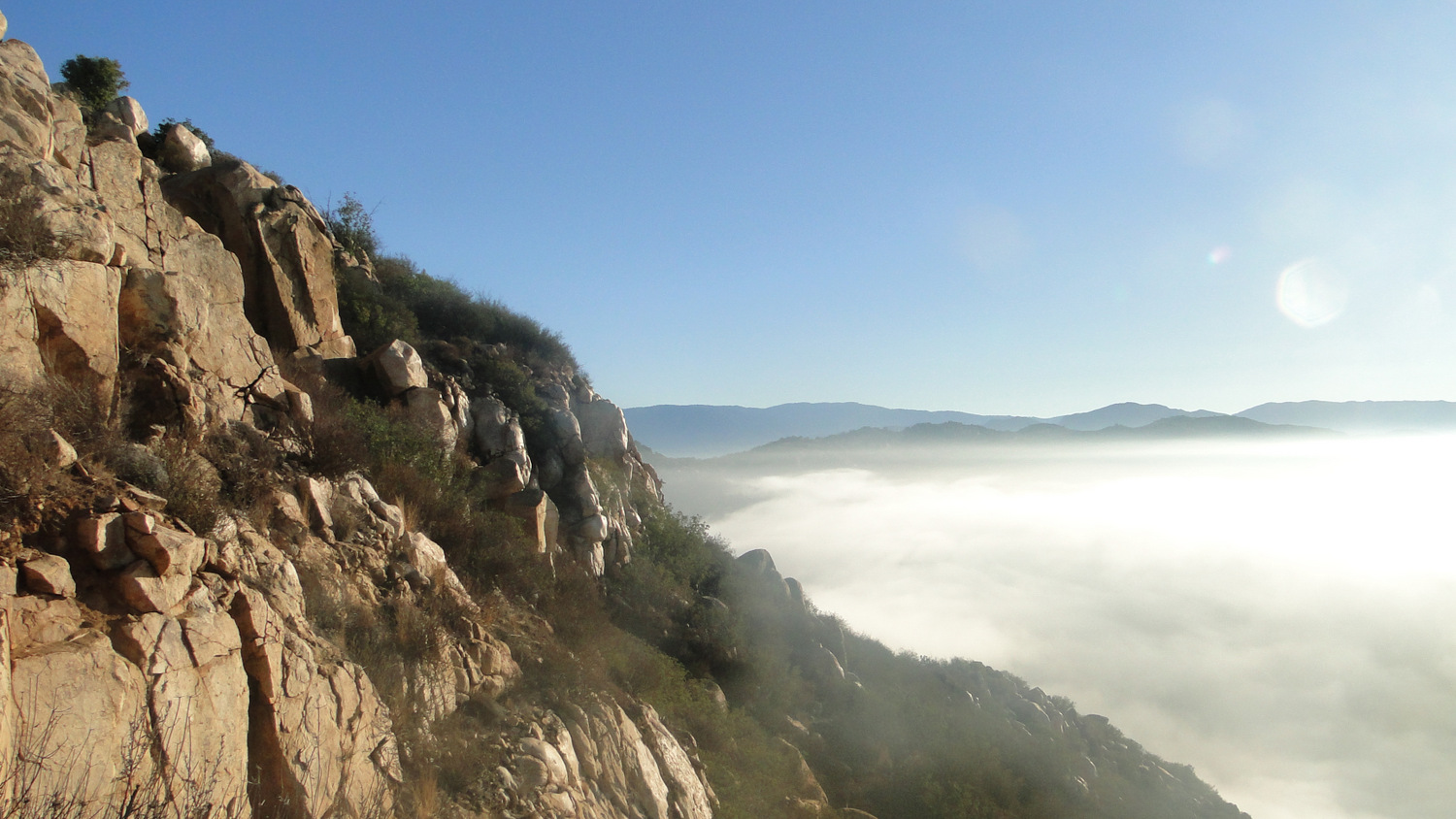 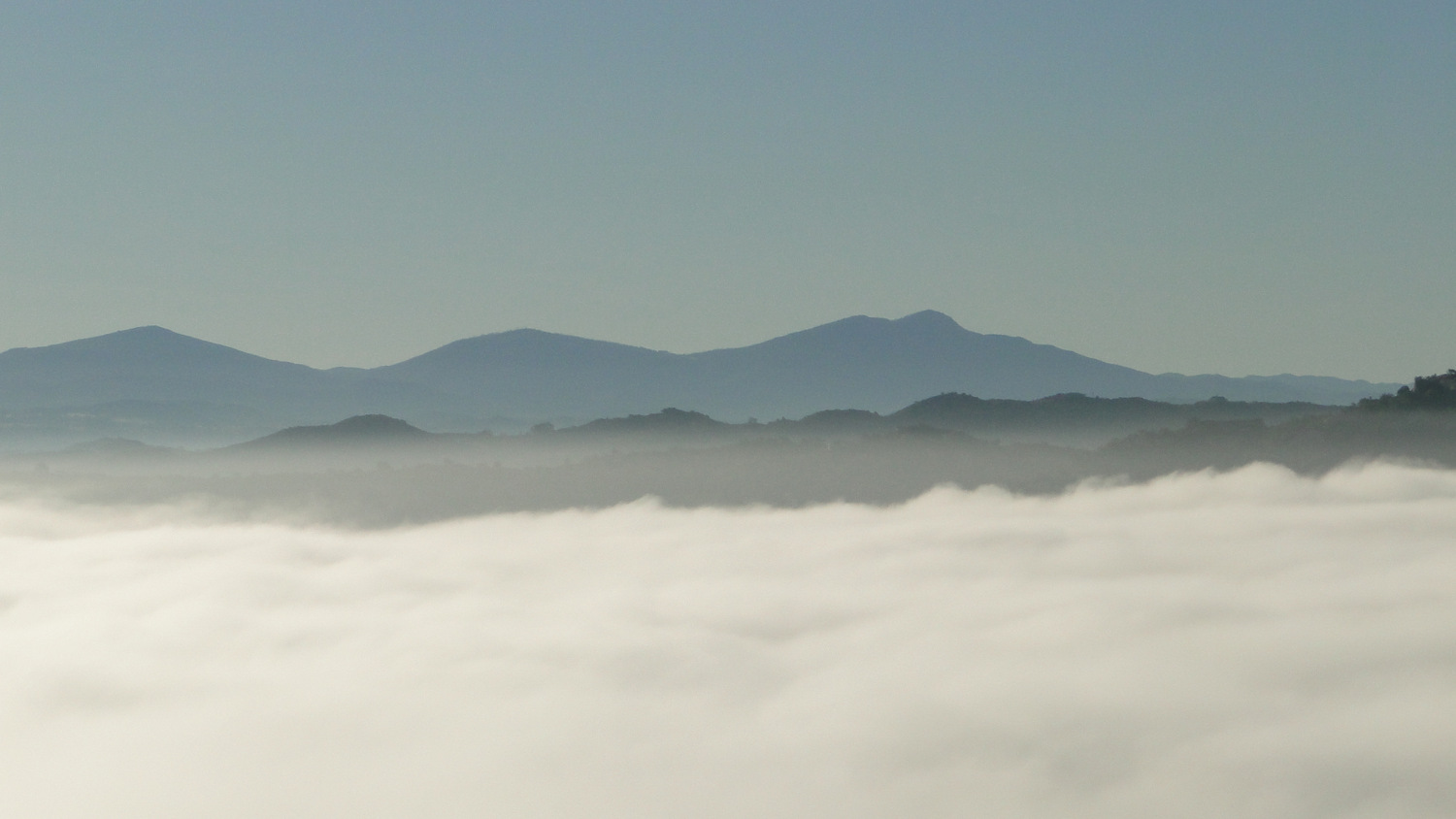 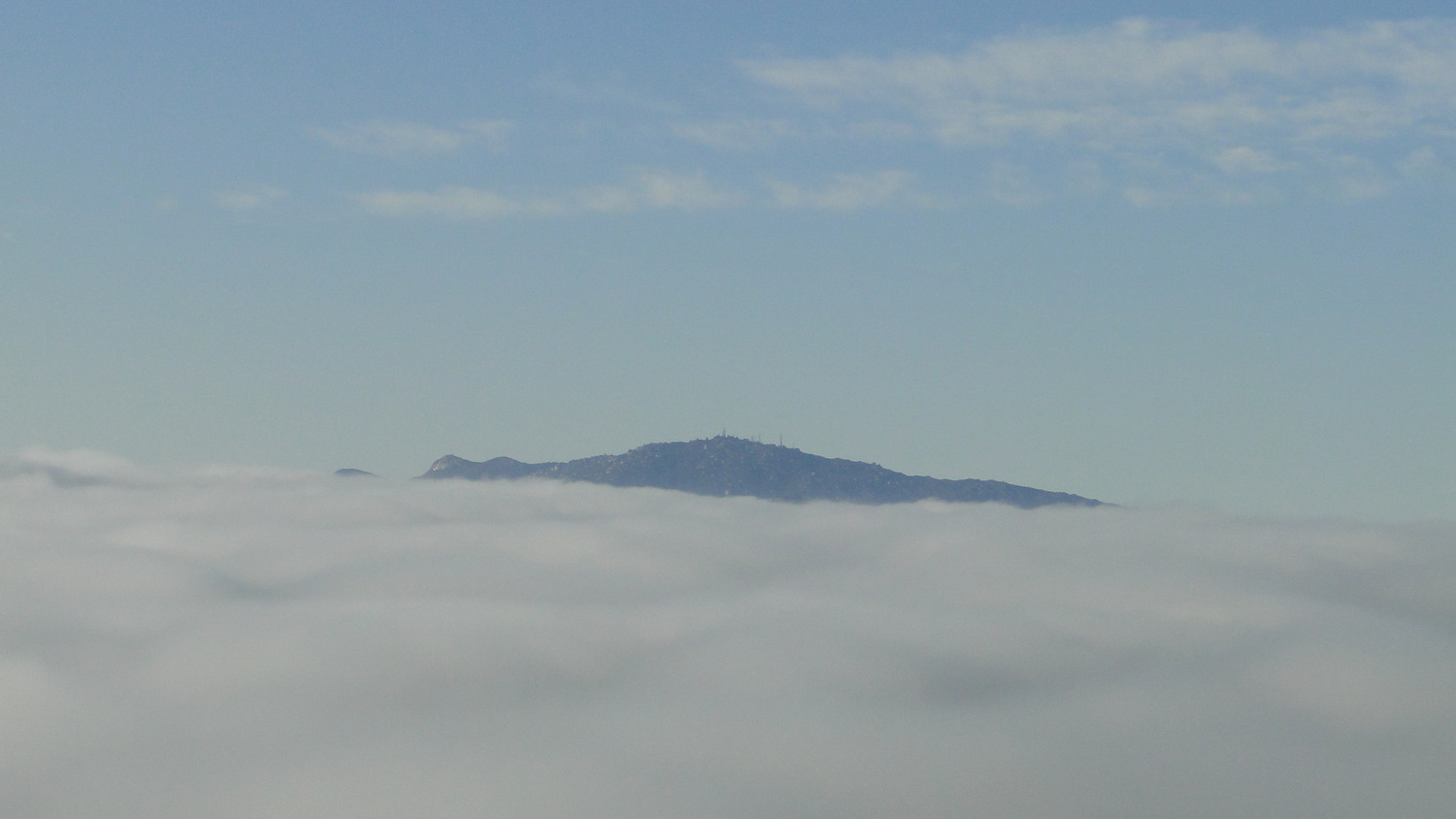 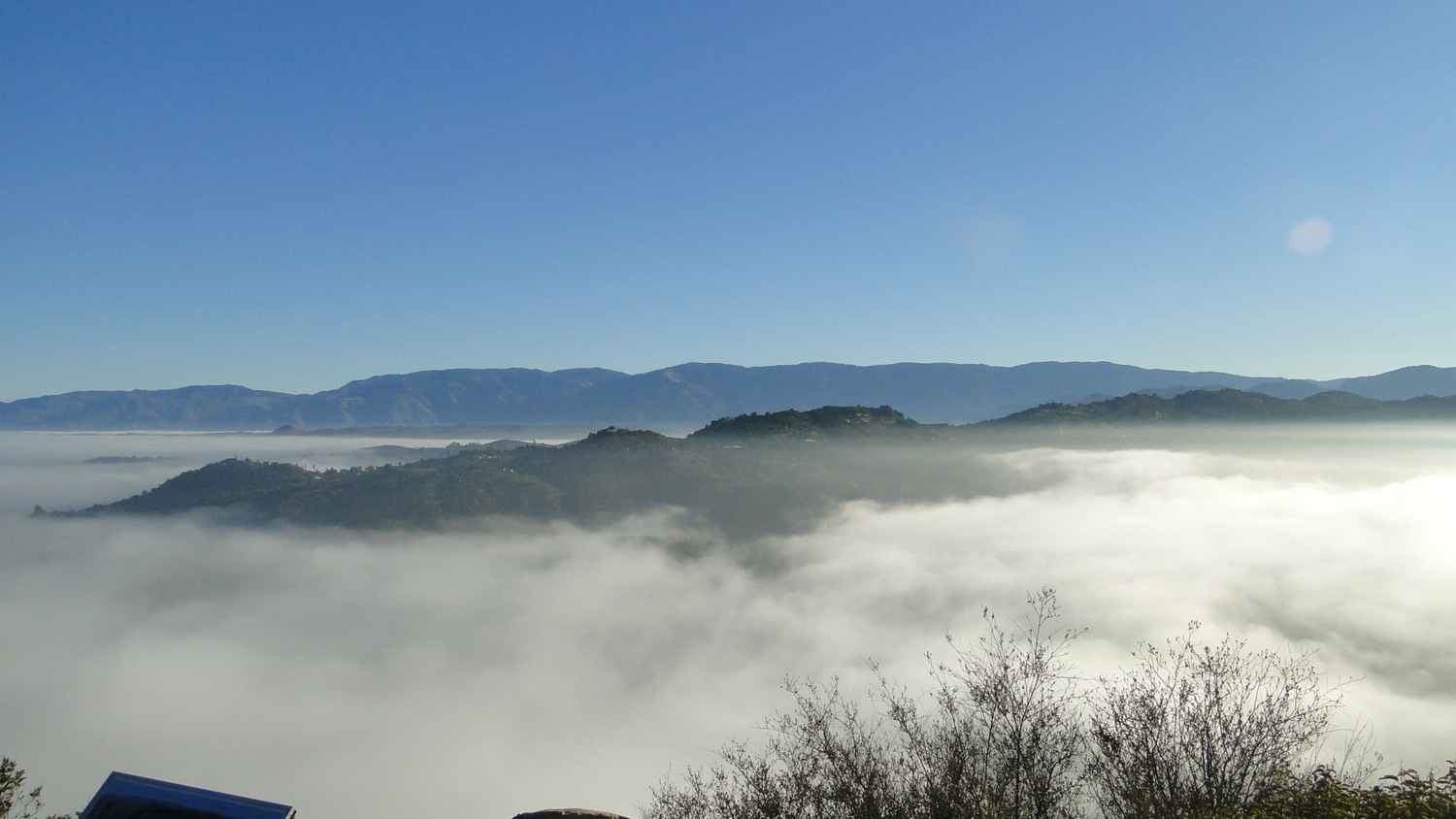 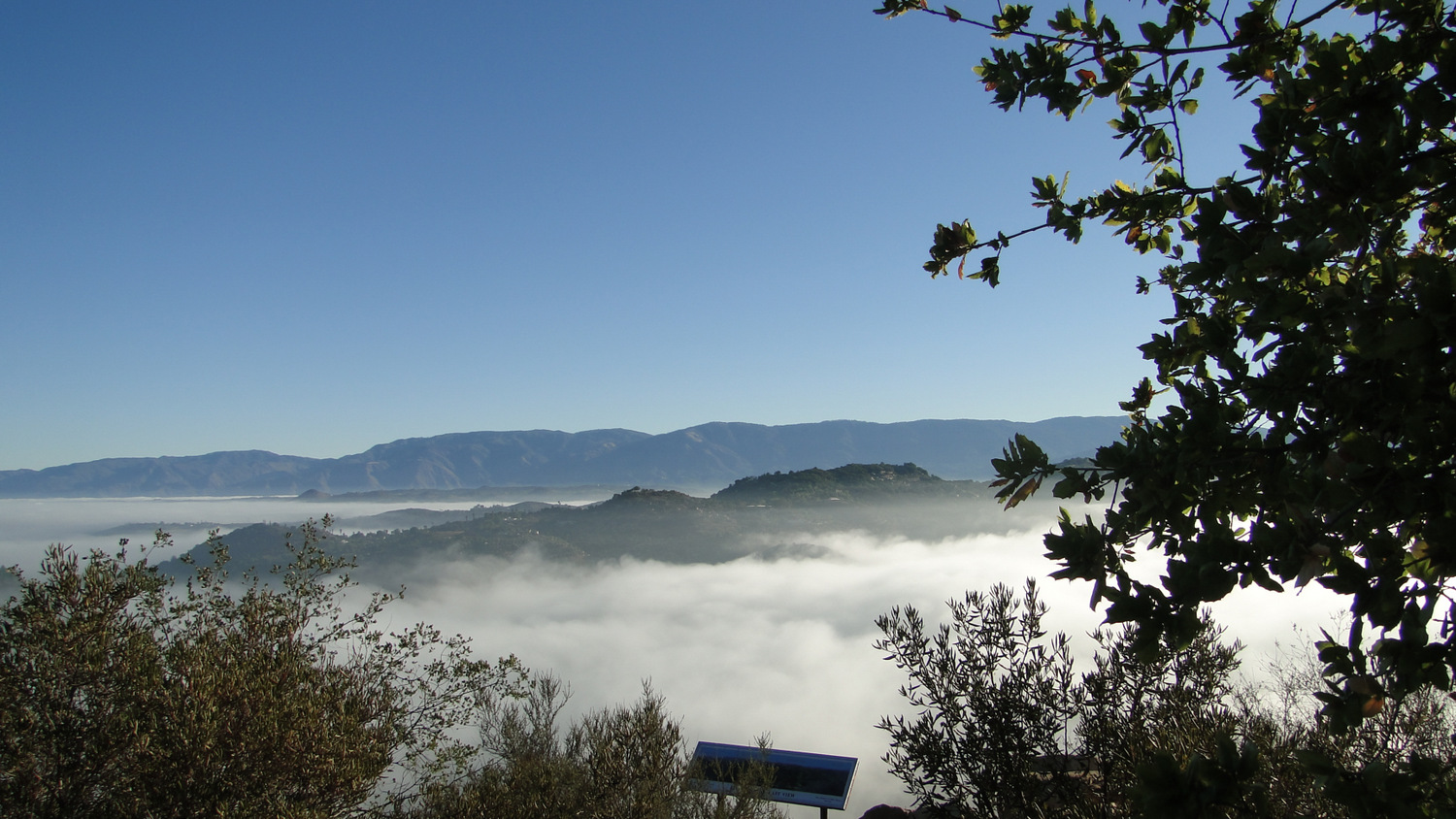 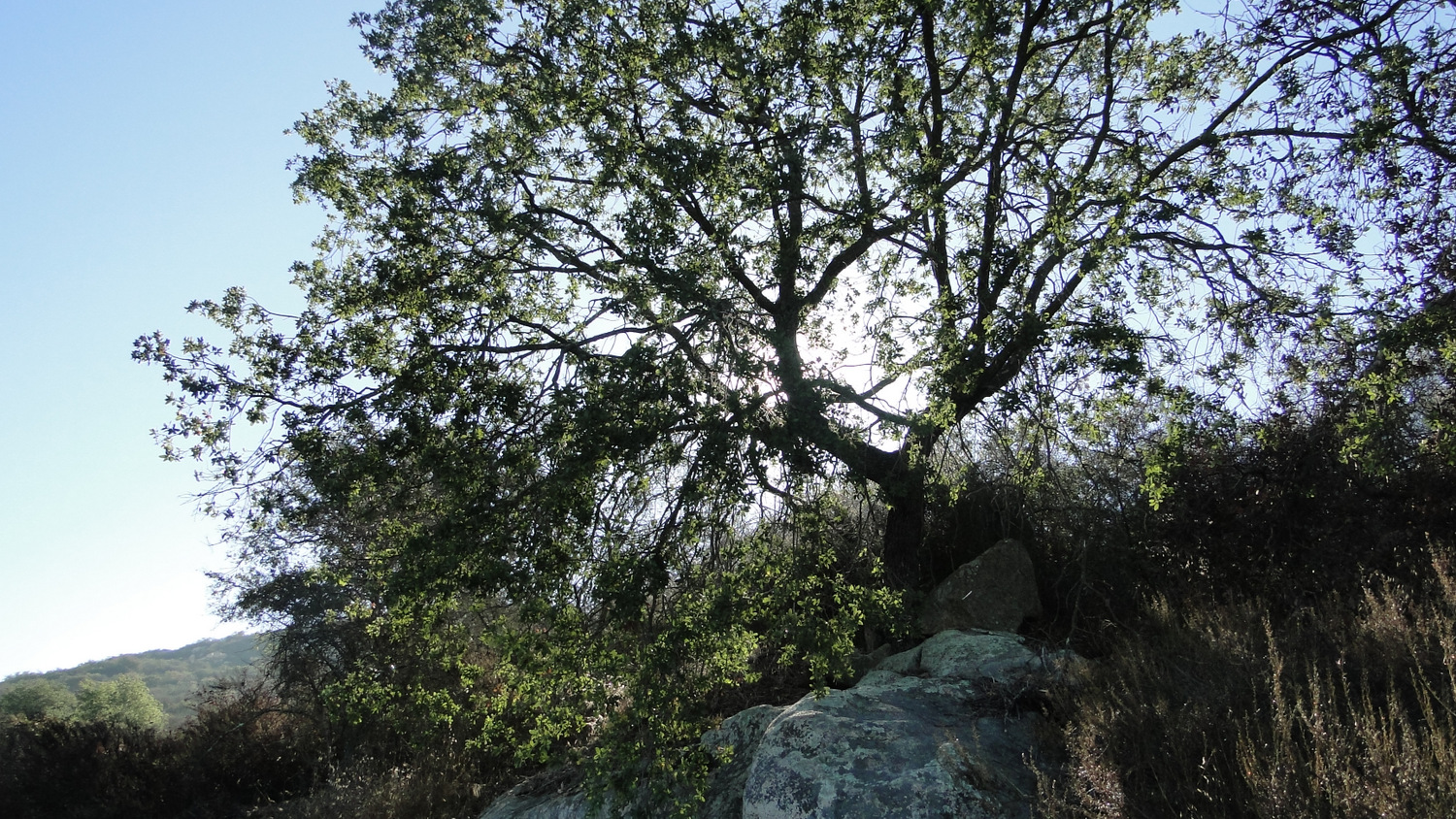 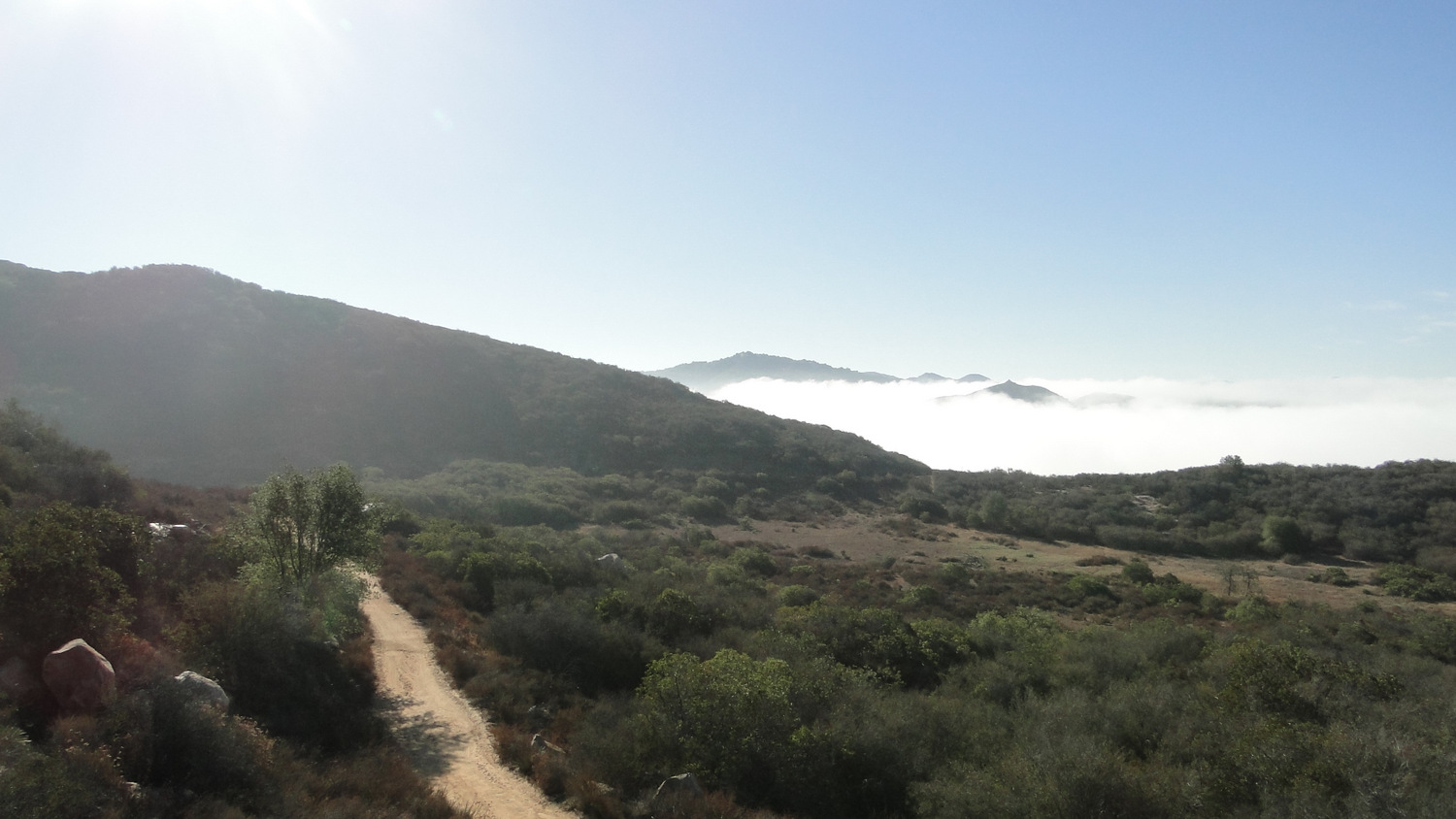 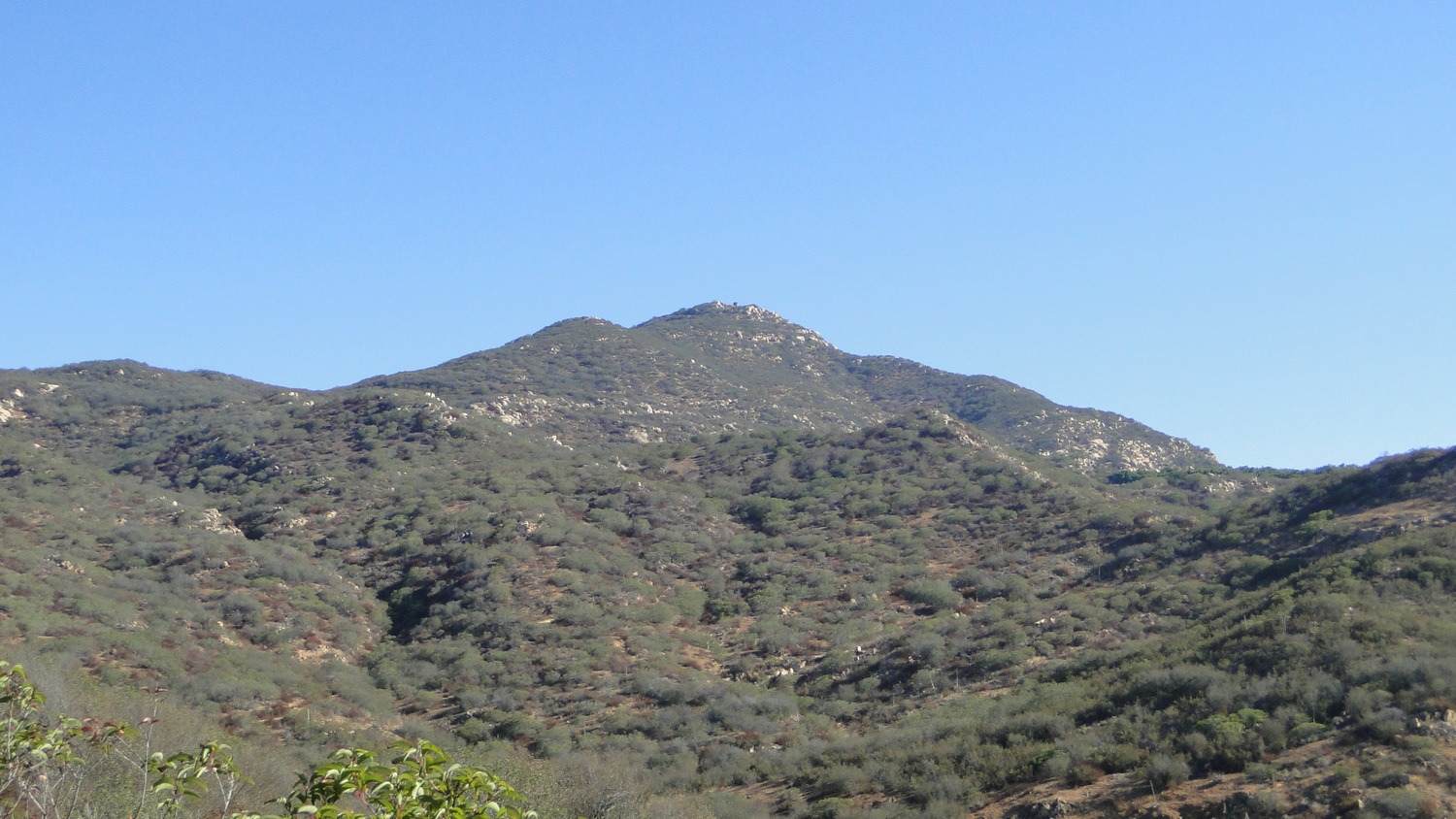 The trail is generally in really good shape. It is also well-marked and well-traveled. The only minor challenges here are a few poorly signed or closed trails branching off along the route, and the track gets kind of rough on the way up to the summit.

The nearest campground is at Dixon Lake, which offers one trailhead into Daley Ranch, as well as access to the most popular trailhead at La Honda Drive.

Take Highway 78 to the end of the freeway and turn left on Broadway. Turn right onto El Norte. Turn left onto Valley Parkway, which becomes Valley Center Road. Turn left on Beven Drive, which also features a sign for the Escondido Humane Society. Cross over Escondido Creek on Beven Drive and turn right onto Save a Life Way. The parking lot for the Caballo Trail will be on the left before the Humane Society Campus