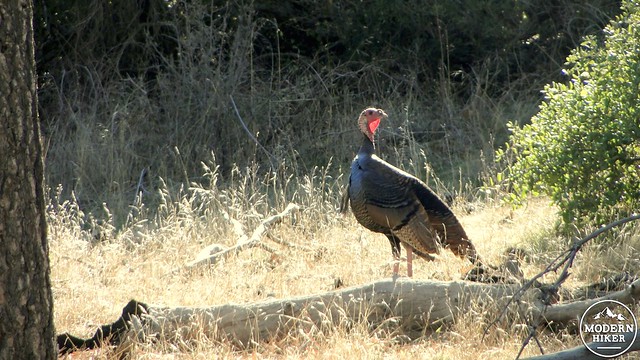 Most of East Mesa is contained within a state wilderness area, which means that mountain bikes and dogs are off-limits. Mountain bikes are allowed on East Mesa Fire Road, upon which this track travels only briefly. There is no fee to park at the Sweetwater parking lot/trailhead, although there is a fee of $5 (at time of writing) per night to use the campground. Granite Springs Primitive Camp features spring water that must be pumped as well as treated, pit toilets, three established sites good for up to 8 people apiece, and one group campsite good for up to 16 people. The convenience and relative amenities (don’t need to dig holes) make Granite Springs a great “entry-level” backpacking spot for novices who would like to get a taste for what backpacking is all about (again, minus the hole-digging). 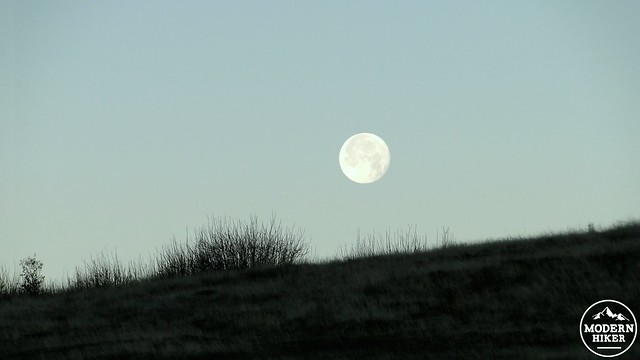 East Mesa is not really a mesa in the classical sense. Instead of having a flat top with steep cliffs on all or most sides, East Mesa slopes gently down into Green Valley. Unlike the surrounding slopes, which are mostly covered in chaparral and the occasional charred oak or pine tree, East Mesa is covered in grass and fringed on its boundaries with Jeffrey pines and black oaks. Once you add the numerous natural springs to the area, the end result is a gentle, grassy landscape that is ideal habitat for local wildlife.

Cuyamaca supports the largest deer herd in San Diego County, as well as a vast array of other wild animals. This makes East Mesa a superb wildlife viewing spot. On my most recent trip, I saw 10 deer (3 bucks, 7 does), two flocks of wild turkeys, a coyote, three rabbits, a flock of mountain quail, a horned lizard, several other types of lizards, ravens, hawks, and a plethora of songbirds. Of course, one must also note that with the large amount of prey animals present that mountain lions may also be present. You are extremely unlikely to encounter a mountain lion, but it is always a possibility. In fact Cuyamaca has more reports of mountain lion spottings than most places, so it is good to review what to do in the extremely rare event of encountering a lion. 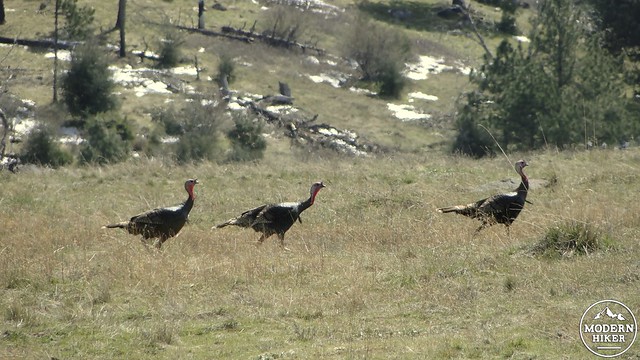 Starting from the Sweetwater Parking lot, commence your hike by going left through the gap in the fence. You will immediately begin climbing through recovering chaparral and oak trees, although you will see numerous dead trees that were killed by the 2003 Cedar Fire. This entire area was swept over by that blaze, and you can see abundant evidence of both the widespread destruction and the widespread recovery. The recovering habitat is pretty messy in that there is a decent amount of overgrowth in spots as well as a lot of downed logs. However, the area is recovering well, especially the oaks, and should continue to do so throughout the future. 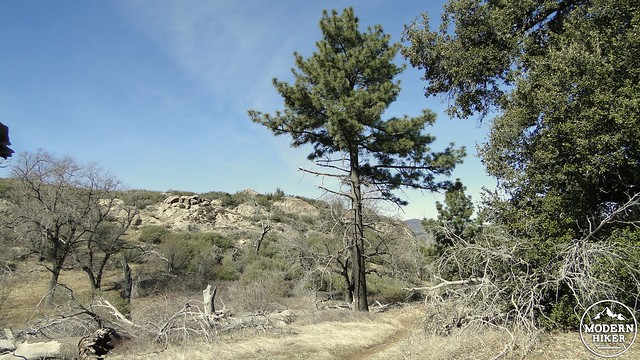 Veer left at the junction with the East Side Trail, which parallels Highway 79 for some miles, and commence your climb. You will get the worst and warmest of the trail’s 1,200′ of climbing out of the way up front. As you climb up through a chaparral-clothed ravine, you’ll probably do a fair amount of sweating, especially from late Spring to early Autumn. After passing the signed junction with the Oak Trail, which connects to nearby East Mesa Fire Road, the trail will pass over a saddle where views north over the park will open up. 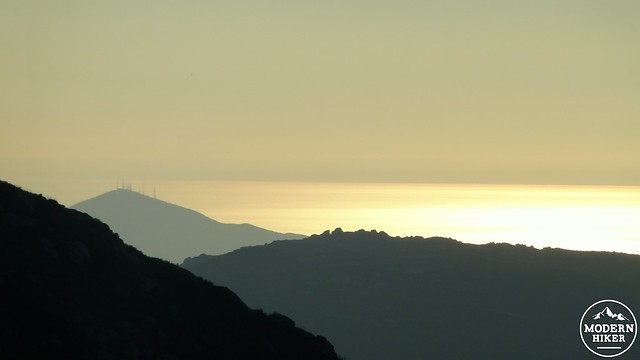 Sunset views over the ocean from East Mesa’s high point

From here, you’ll get your first good look at the quartet of peaks on the park’s north side, including Cuyamaca, Middle, North, and Stonewall. This section of trail gets a little overgrown from the exuberantly recovering manzanita and ceanothus plants in the area. Navigation shouldn’t be an issue, but you’ll have to watch your step to avoid getting smacked in the face by an overhanging ceanothus branch. You’ll pass a junction on the left for the Pine Trail, which connects to the nearby Juaquapin Trail. Ignore it and stay straight.  The climb starts to mellow out a bit as the views north steadily improve. 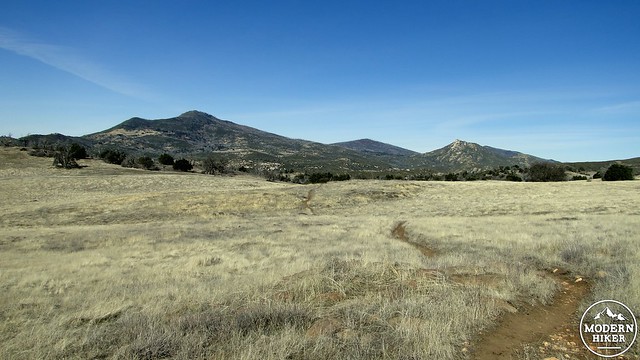 Peaks from left to right: Japacha, Cuyamaca, Middle, and Stonewall

The climb picks up again, but not nearly as strenuously as the first mile. You’ll pass through a mixture of dead and recovering oaks, as well as a stray Jeffrey Pine rising up through the dense chaparral. After passing a rocky patch on the right, the trail will come to a junction with the Dyar Spring Trail off to the left before coming up over a low rise. As you cross that rise, the sprawling grasslands you’ve been anticipating come into view, and from here, the trail climbs up through these grasslands on its way to Granite Springs Camp. 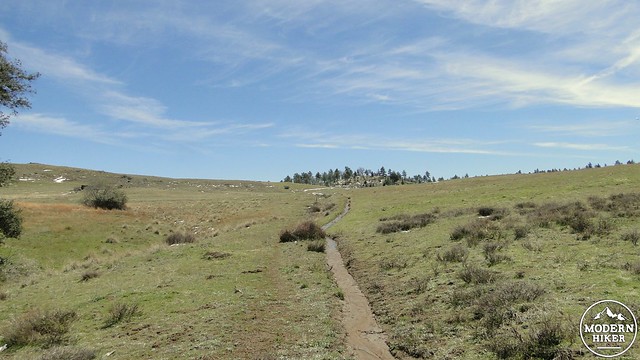 Climbing up onto East Mesa

The views really start getting good, as the cresting wave-shaped Cuyamaca Peak contrasts dramatically against the golden (or green in season) grass waving in the breeze. The trail winds around a bend and makes a long, lazy switchback around a spring that either trickles or dries up according to the season. After this switchback, the trail reaches the East Mesa crest, where it junctions with the Grass Trail to connect to East Mesa Fire Road. Soon, the Harvey Moore Trail merges into East Mesa Fire Road, and in a few tenths of a mile, you will arrive at Granite Springs Campground. 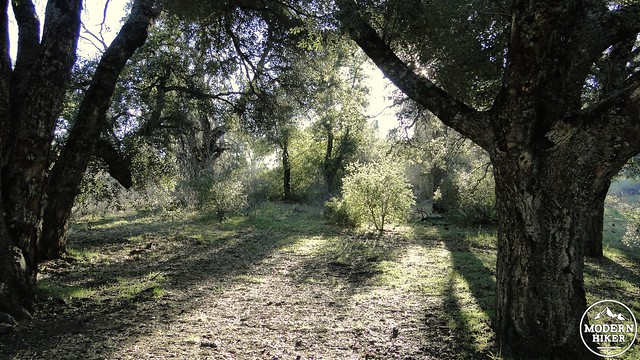 A campsite at Granite Springs

As mentioned before, Granite Springs features three regular campsites and one group site, in addition to a water pump and a pit toilet. Nearby, you will find a stable for horses, as East Mesa is also a popular destination with equestrians. The area is a little more heavily forested, and you’ll have the option to camp out under a mix of coast live oaks and vanilla-scented Jeffrey pines. The campground is about 3.8 miles from the Sweetwater Trailhead, and that, coupled with the “amenities,” makes this a great intro backpacking site. 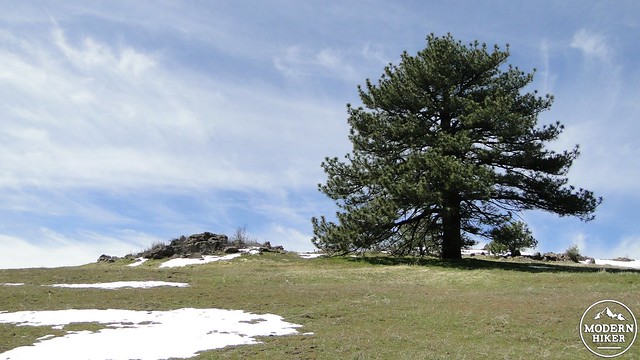 From Granite Springs, retrace your route back to the junction with the Dyar Springs Trail. You have the option of returning all the way along Harvey Moore to your starting point for a 7.2 mile out-and-back trip. If you choose to see a little bit more, you can follow Dyar Springs Trail as it winds through recovering oak woodlands to the site of perennial Dyar Spring, which is a magnet for local wildlife. 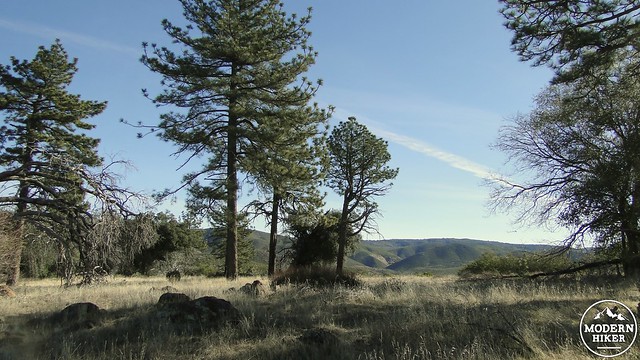 The view east from Granite Springs

The oak woodlands here are well into their recovery, and there are more recovering oaks than dead ones. Oaks are well-adapted to fire. Like chaparral, they can sprout regrowth from their root systems, which is why you will often find dense clusters of oaks growing together and fusing into a single tree. For oaks that aren’t as thoroughly damaged, leaves will begin to re-emerge from the blackened branches after 3-5 years, and within 10-15 years, most oaks will look pretty much as good as new. The Dyar Spring Trail travels through a lot of examples of this sort of recovery, and it provides abundant evidence that at least Cuyamaca’s oak trees are making a strong recovery. 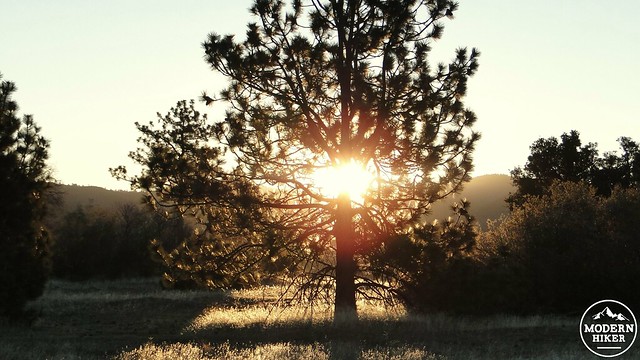 I didn’t take any pictures of Dyar Springs, so you’ll just have to settle for this picture of a pine tree

After passing through some dense grasses, the trail will cross over a few muddy spots marking the various branches of Dyar Spring. The main spring collects inside a large tub. Although the water is cool and inviting after several sweaty miles, it must be treated with either a filter or chemicals before drinking. Near the spring is a hitching post for horses beneath a large rock outcropping and a grove of twisted old oaks. The trail is a little wonky here, but it continues to the right of the hitching post. As it continues, it will wind around the headwaters of Juaquapin Creek on the north side before coming to a junction with the Juaquapin Trail. 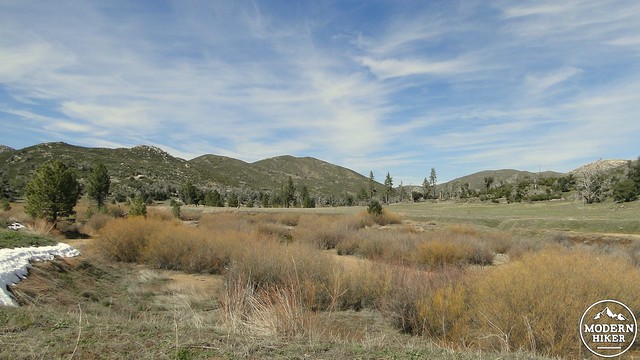 Green Valley and the Sweetwater River

The Juaquapin bears left and descends along the creek, but that is not the route I suggest. Instead, I recommend the Dyar Spring Trail, which will drop you down through a canyon with vigorously recovering black oaks while serving up good views of Green Valley. At the bottom of this small canyon, you will connect with the East Side Trail. You’ll probably notice a bunch of buildings comprising Camp Cuyamaca, where school kids come out for a week at a time to get in touch with their wild sides. On my most recent trip, I was serenaded from across the valley by an out-of-tune middle school band plugging away through a rendition of “Georgia on My Mind.” 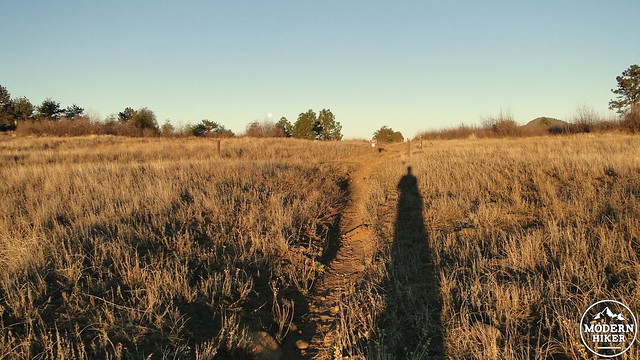 The rest of the trip takes place on the smooth and even East Side Trail, which passes between the Sweetwater River (dry in summer) and pine and oak woodland to the left. Much of the woodland here was spared from the fire, so the damage from the Cedar Fire isn’t as present on this section of the trip. This section of trail is absolutely glorious in the early evening, when the sun is sinking low and casting long shadows over Green Valley. I broke the cardinal rule of photography, which is to always, always, always remember to bring a camera, and so I have failed you in documenting these spectacular scenes. 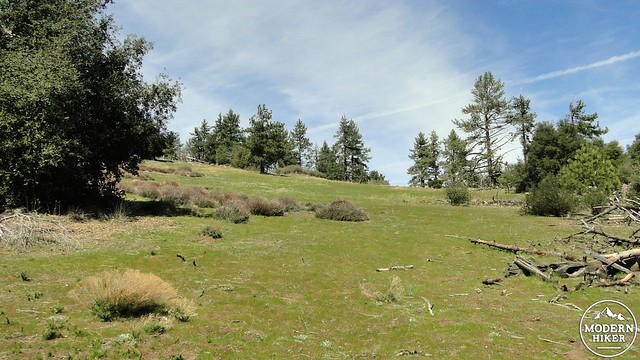 Grass and woodlands on the Harvey Moore Trail

So, you’ll just have to hike it yourself. After wrapping up the East Side Trail, you’ll end up back at the car, where you can plot your next move. This is a pretty comprehensive review of the southeast corner of Cuyamaca S.P., and it omits only Oakzanita Peak, which is accessible nearby. Given the combination of wildlife, views, pine trees, the campground, and the various options present, this is one of my favorite areas of the park, as well as the entire county. There are so many things to see here that even a brief foray feels like a very full and satisfying event. Stretched out over a two day overnighter allows for a leisurely exploration that can take every aspect in thoroughly. 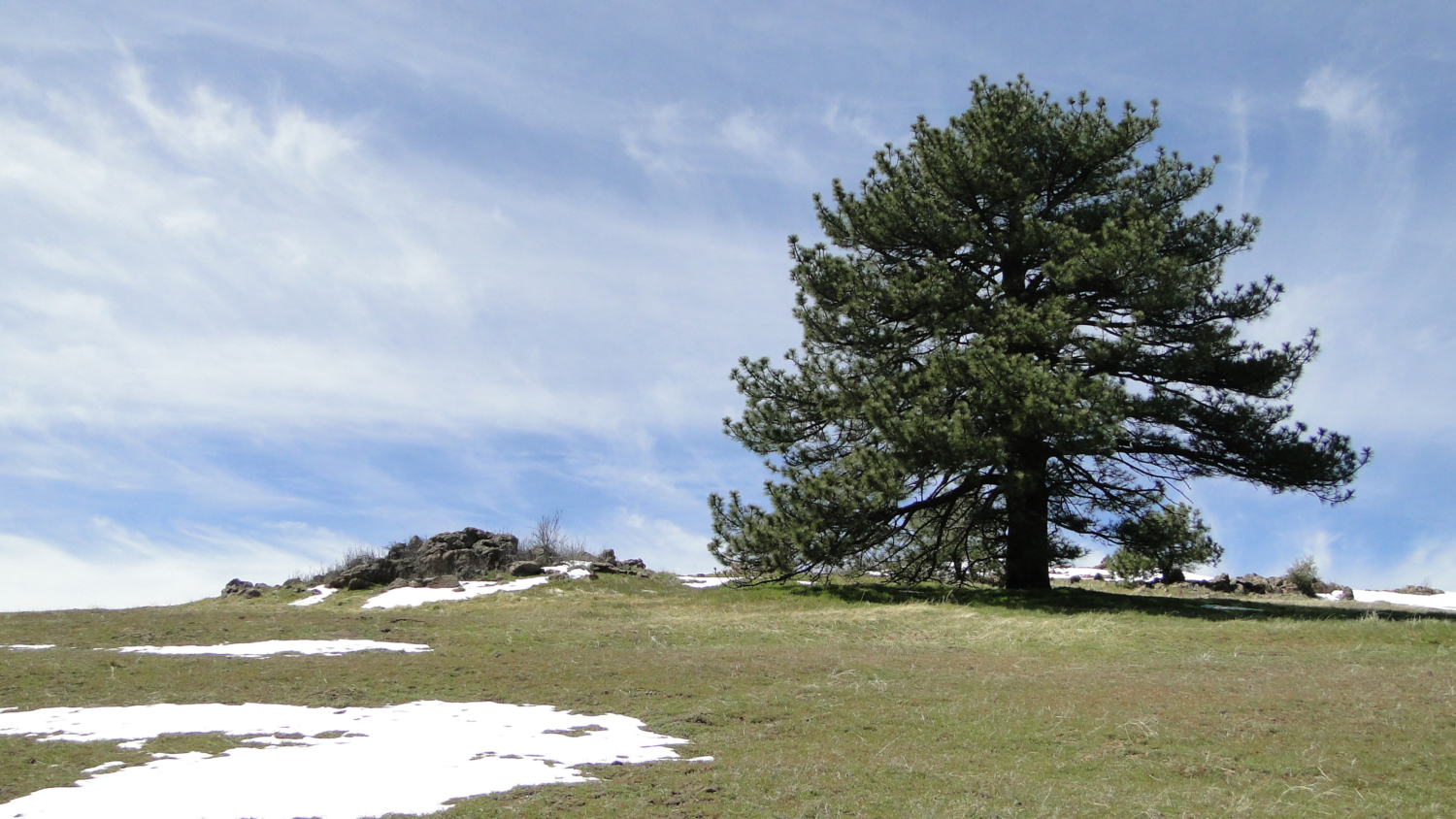 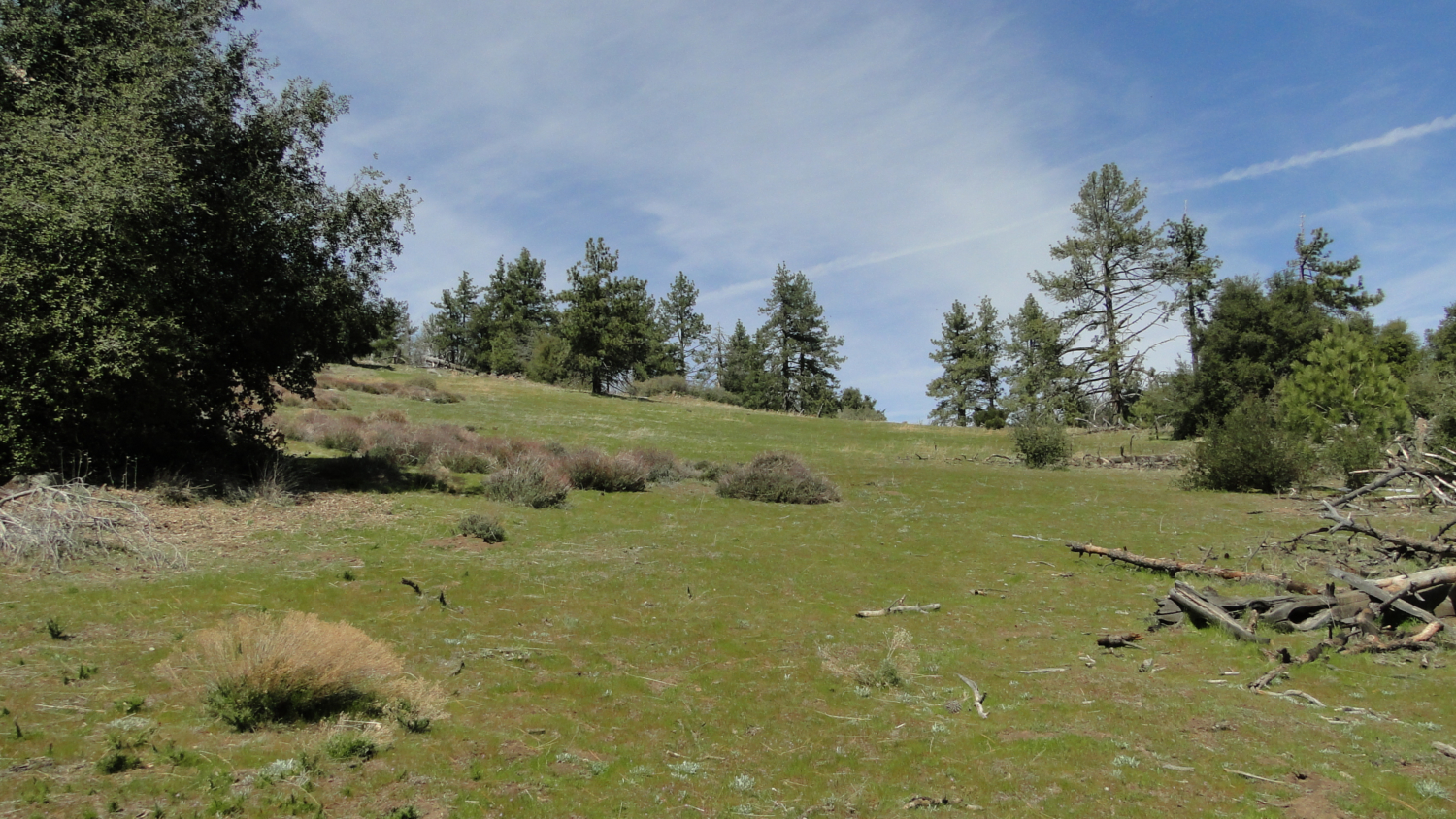 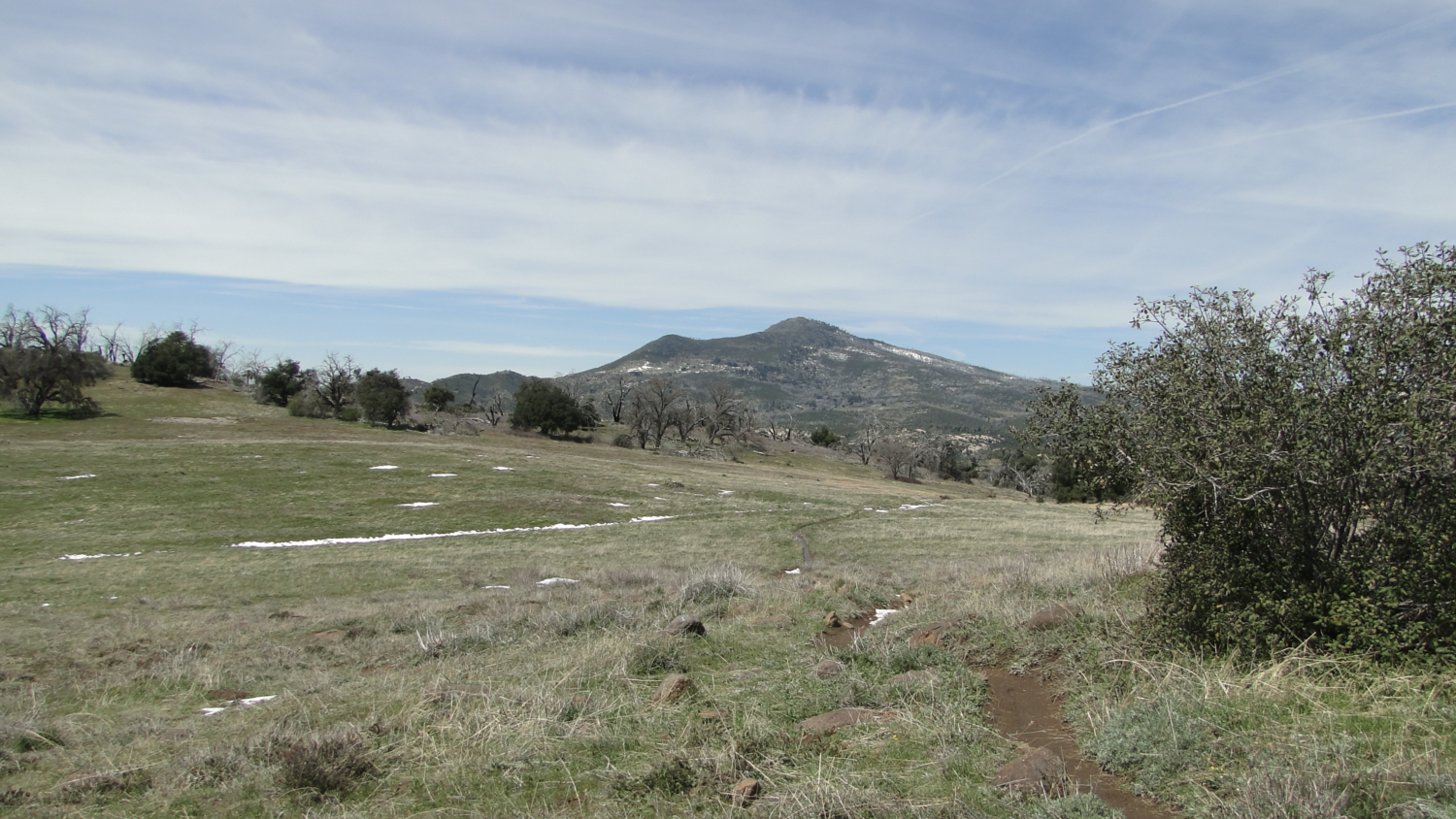 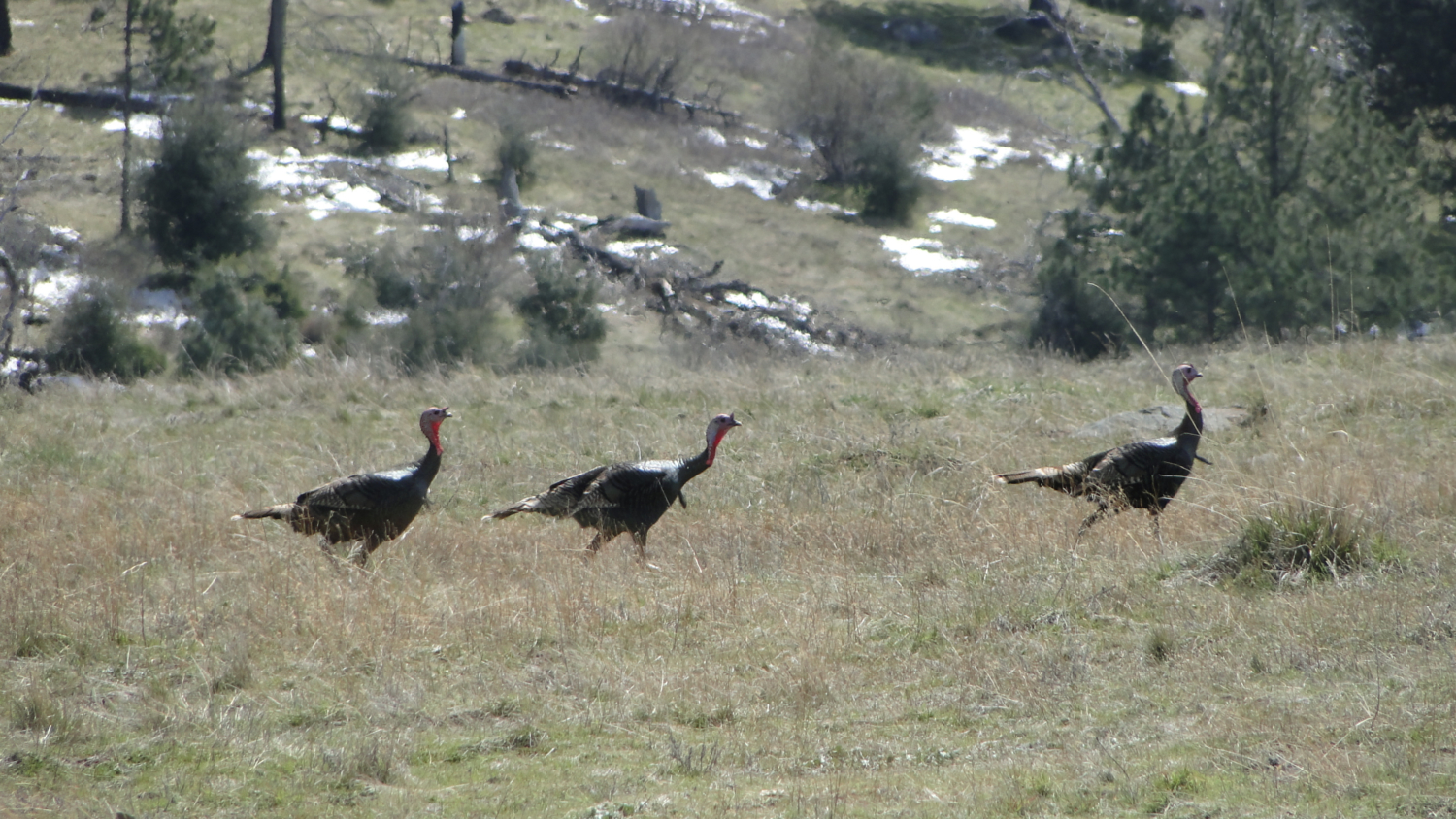 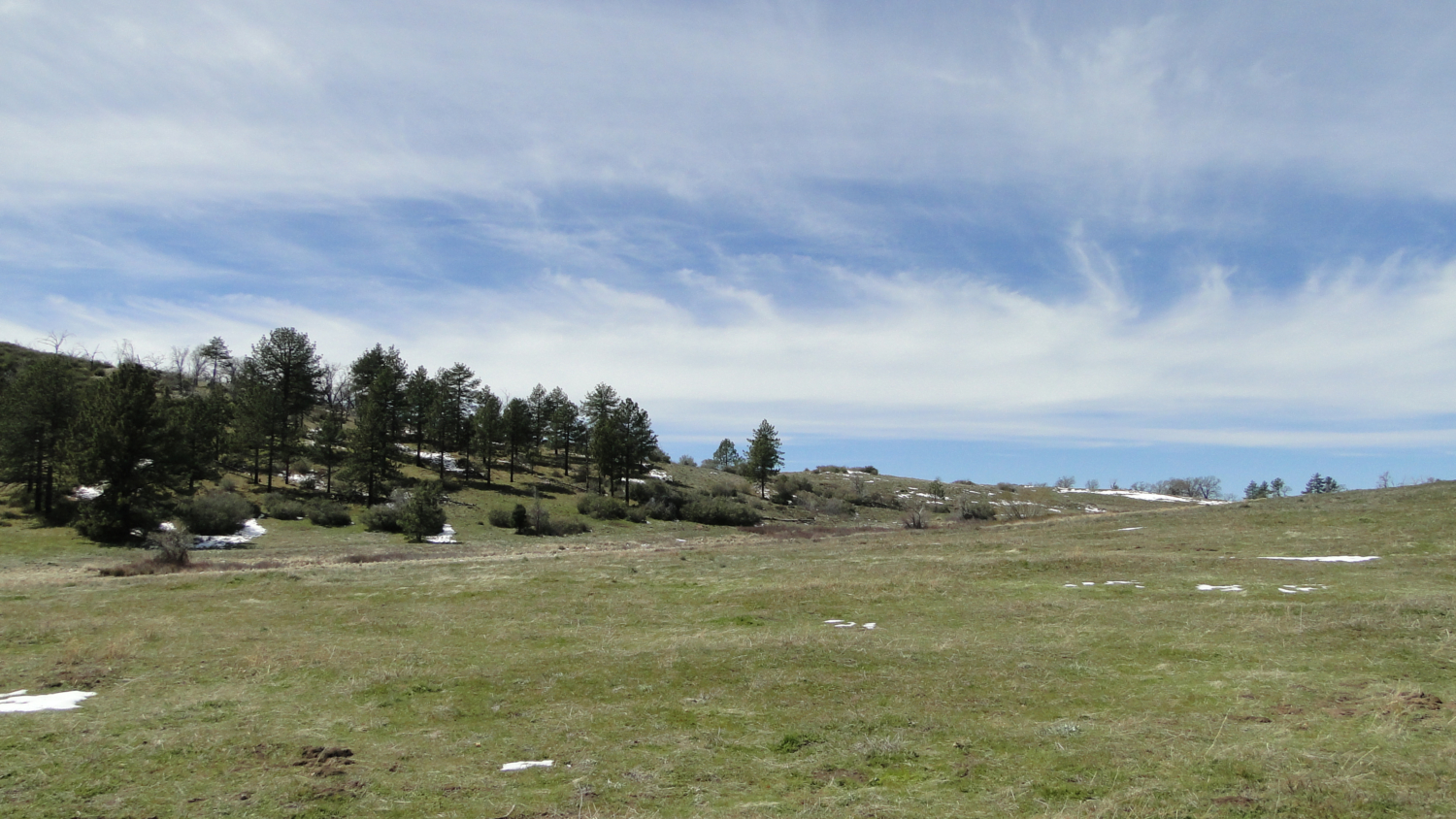 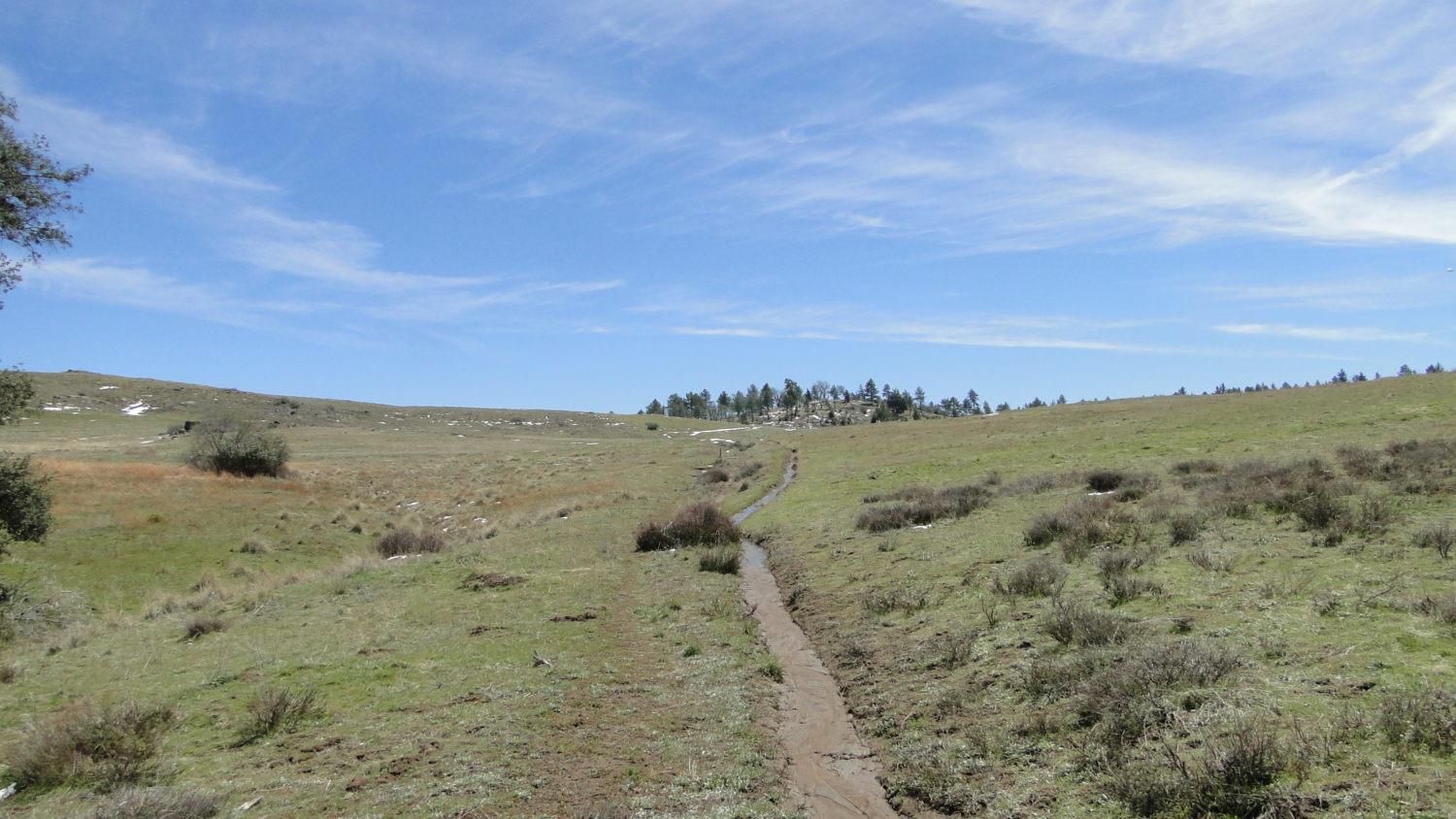 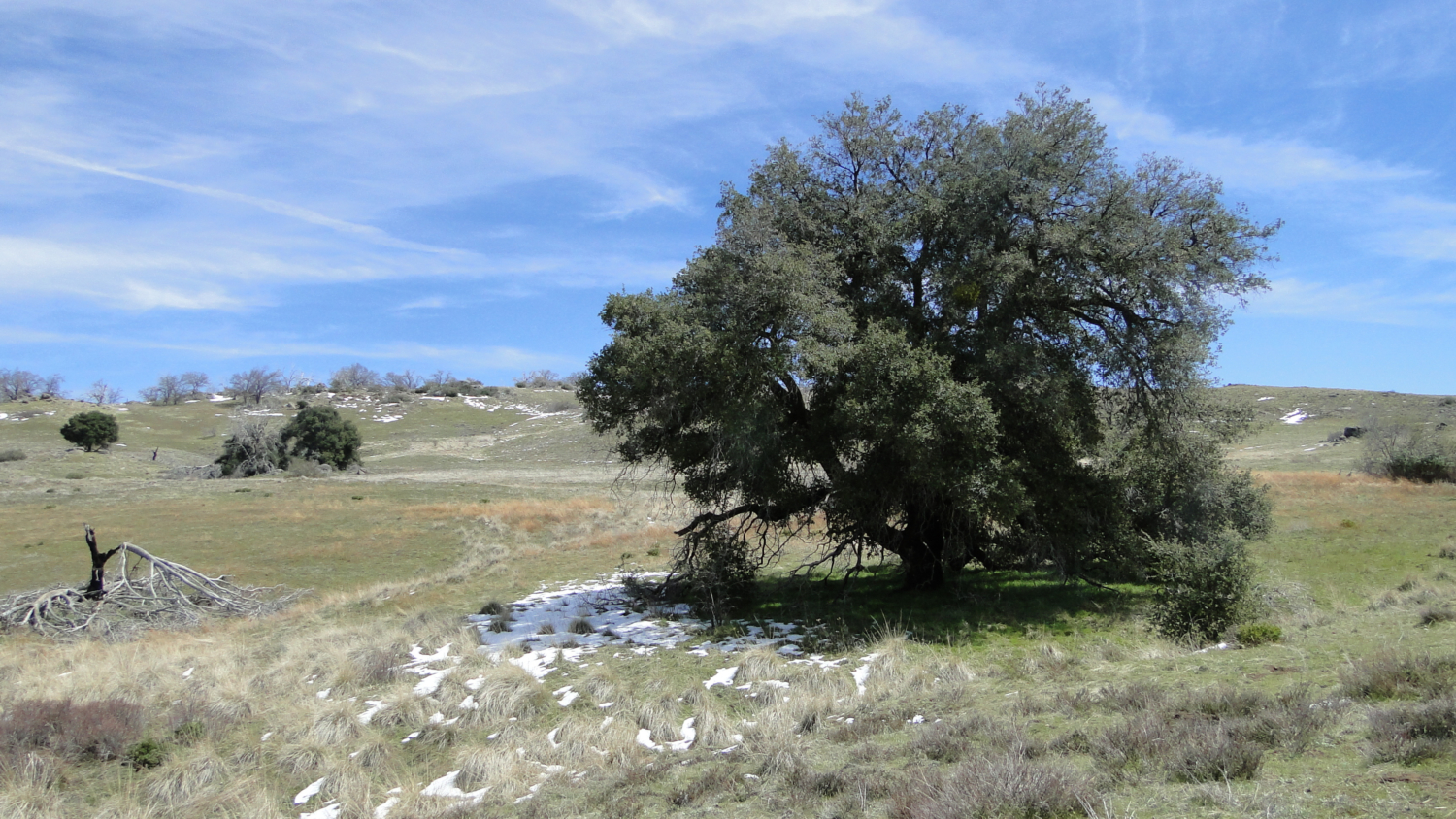 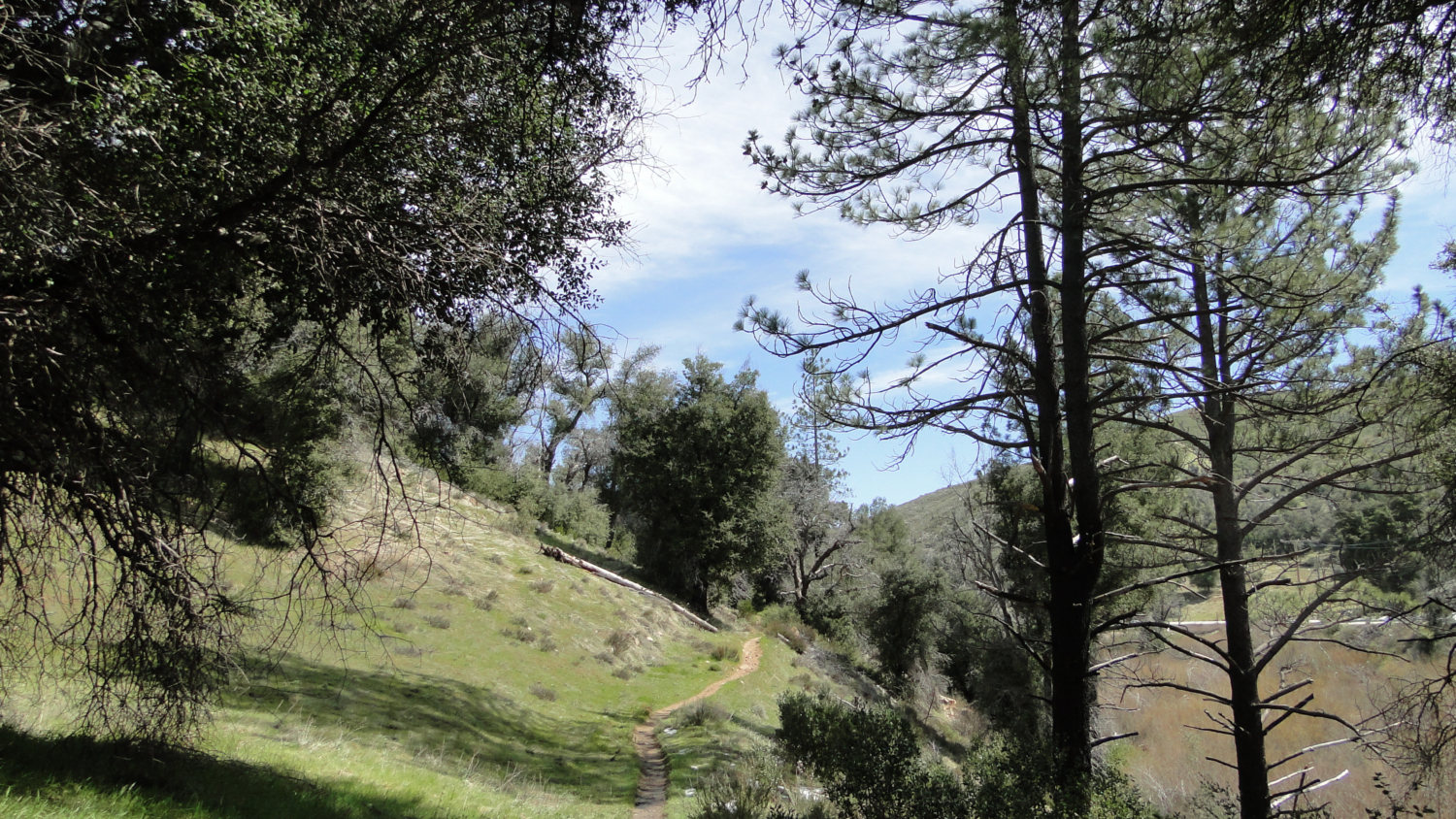 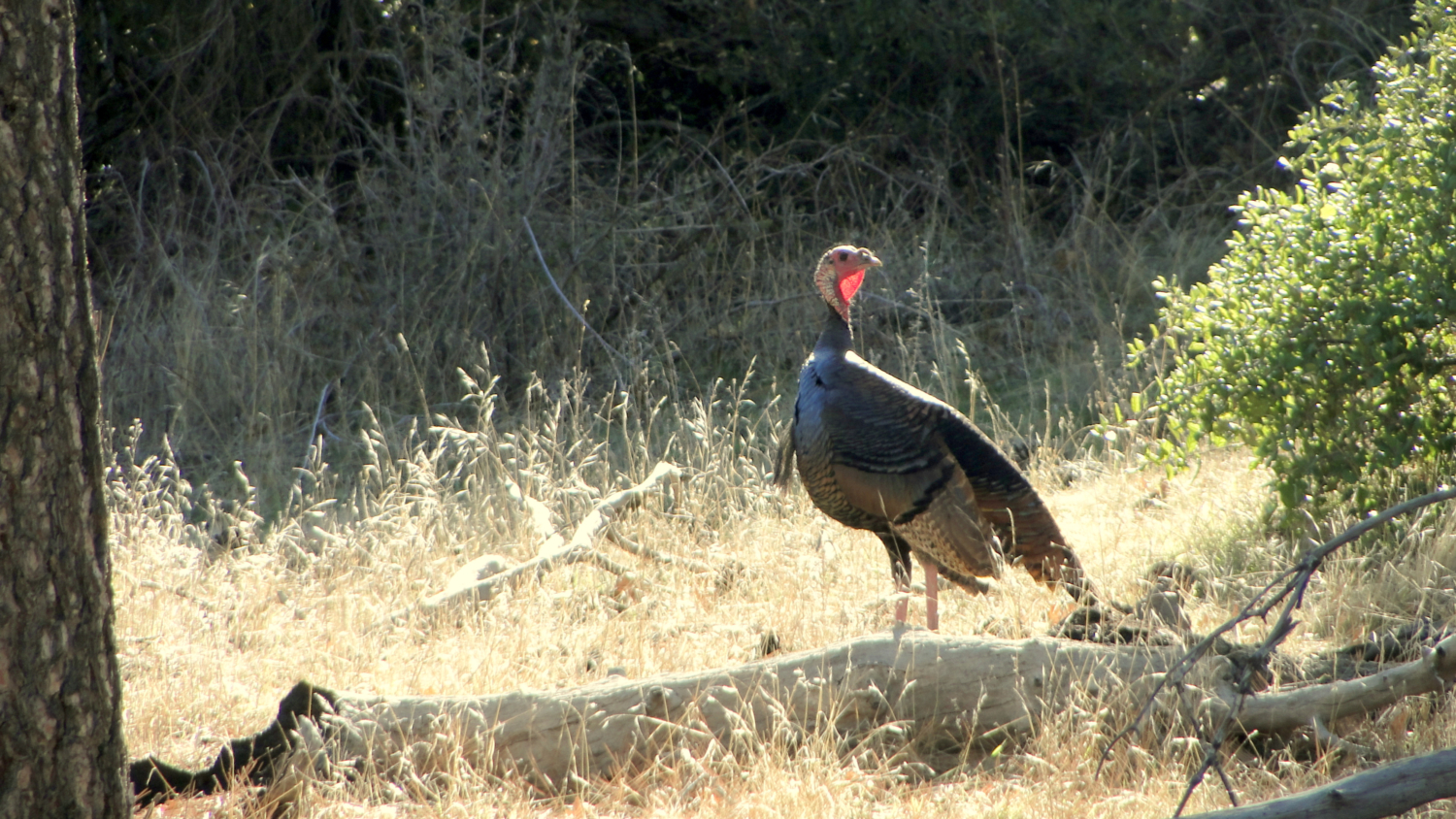 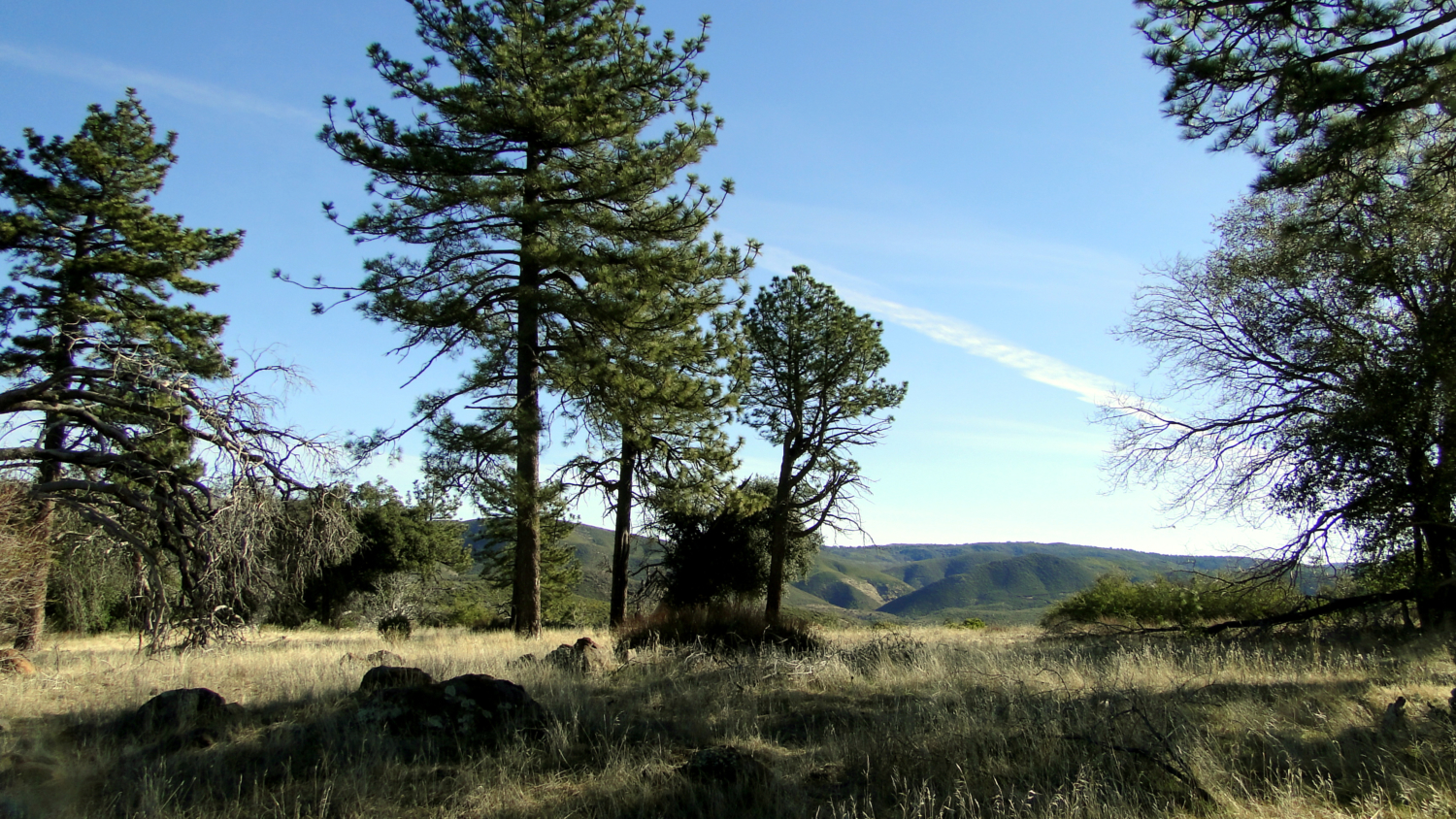 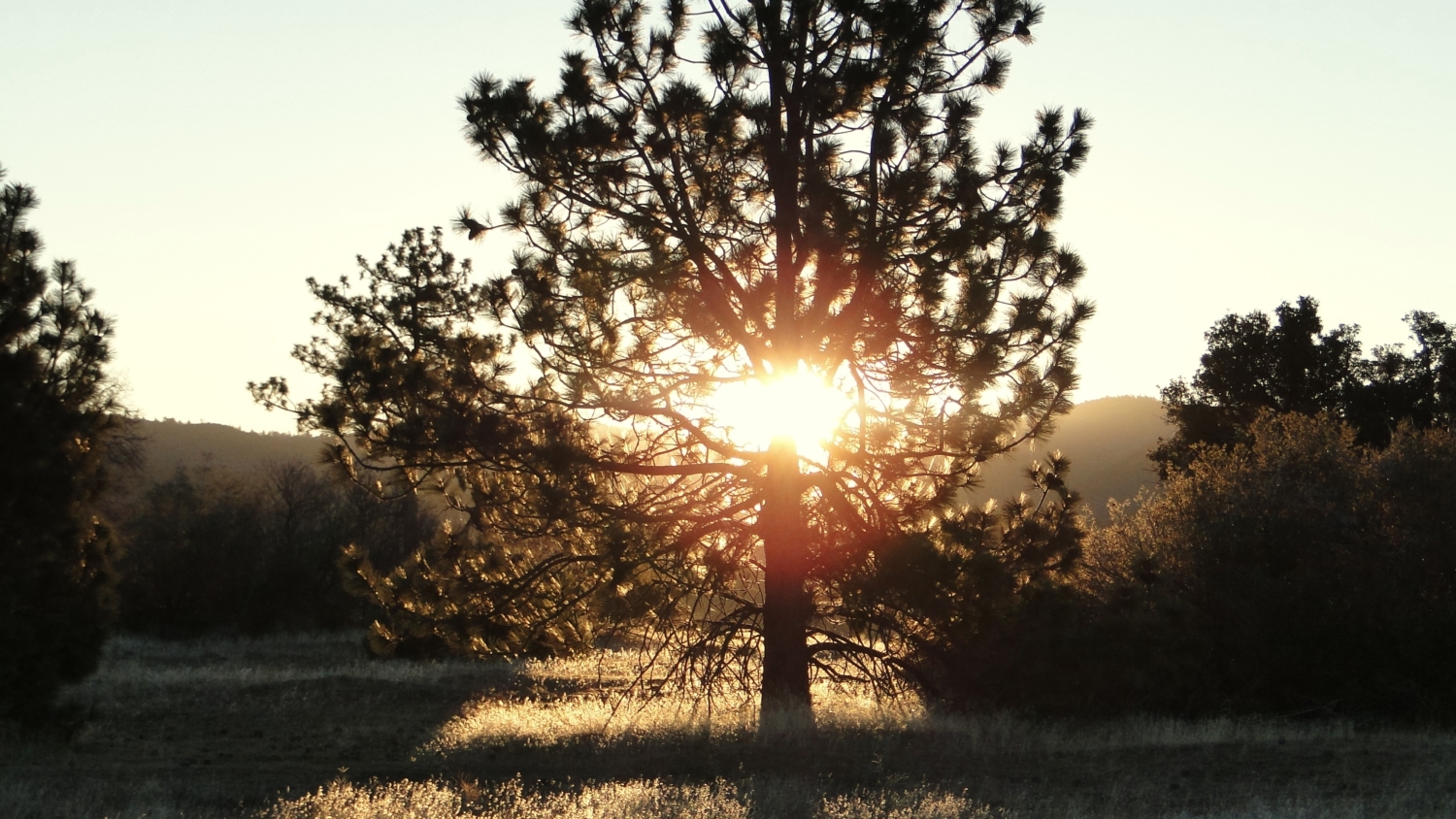 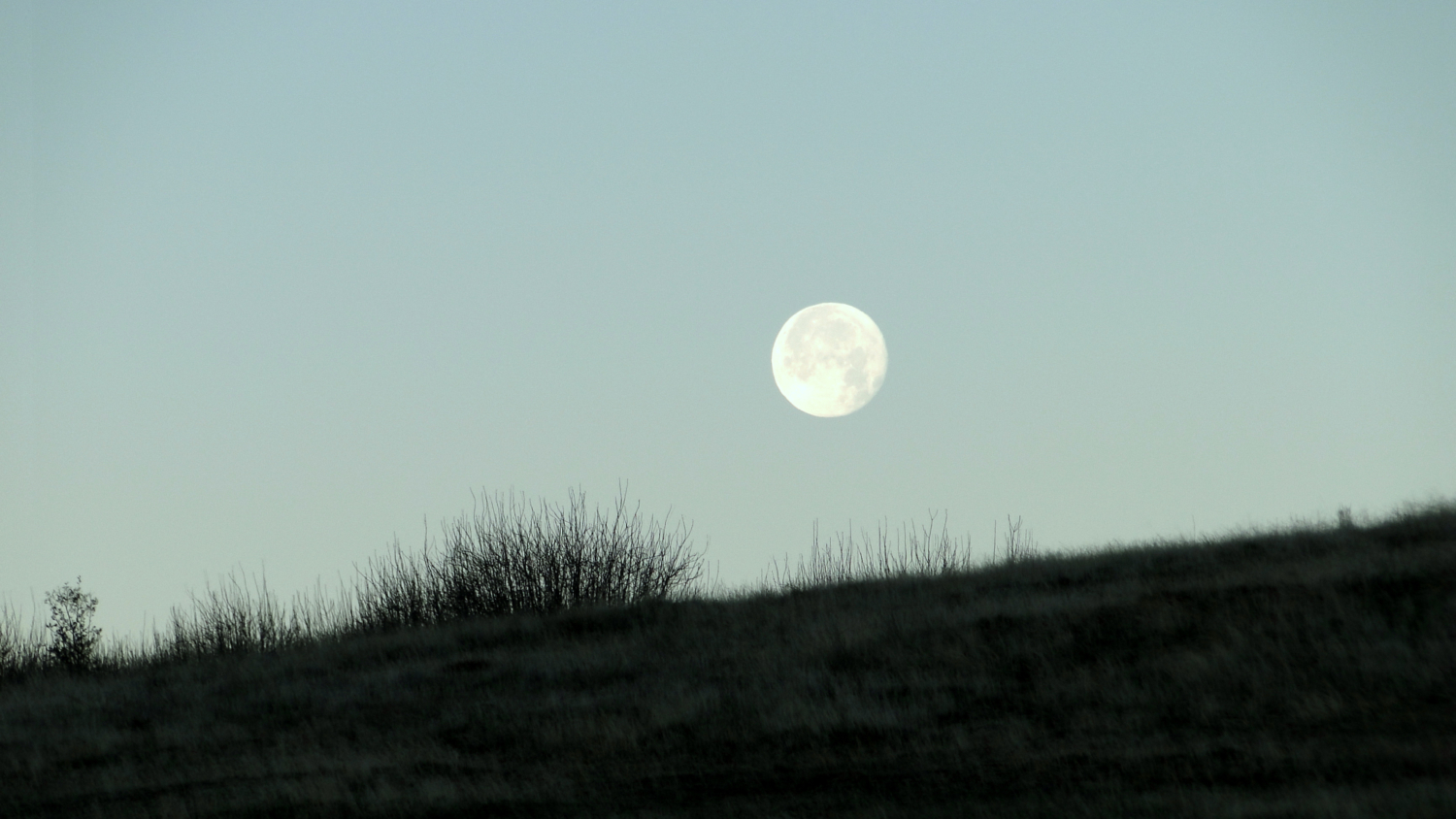 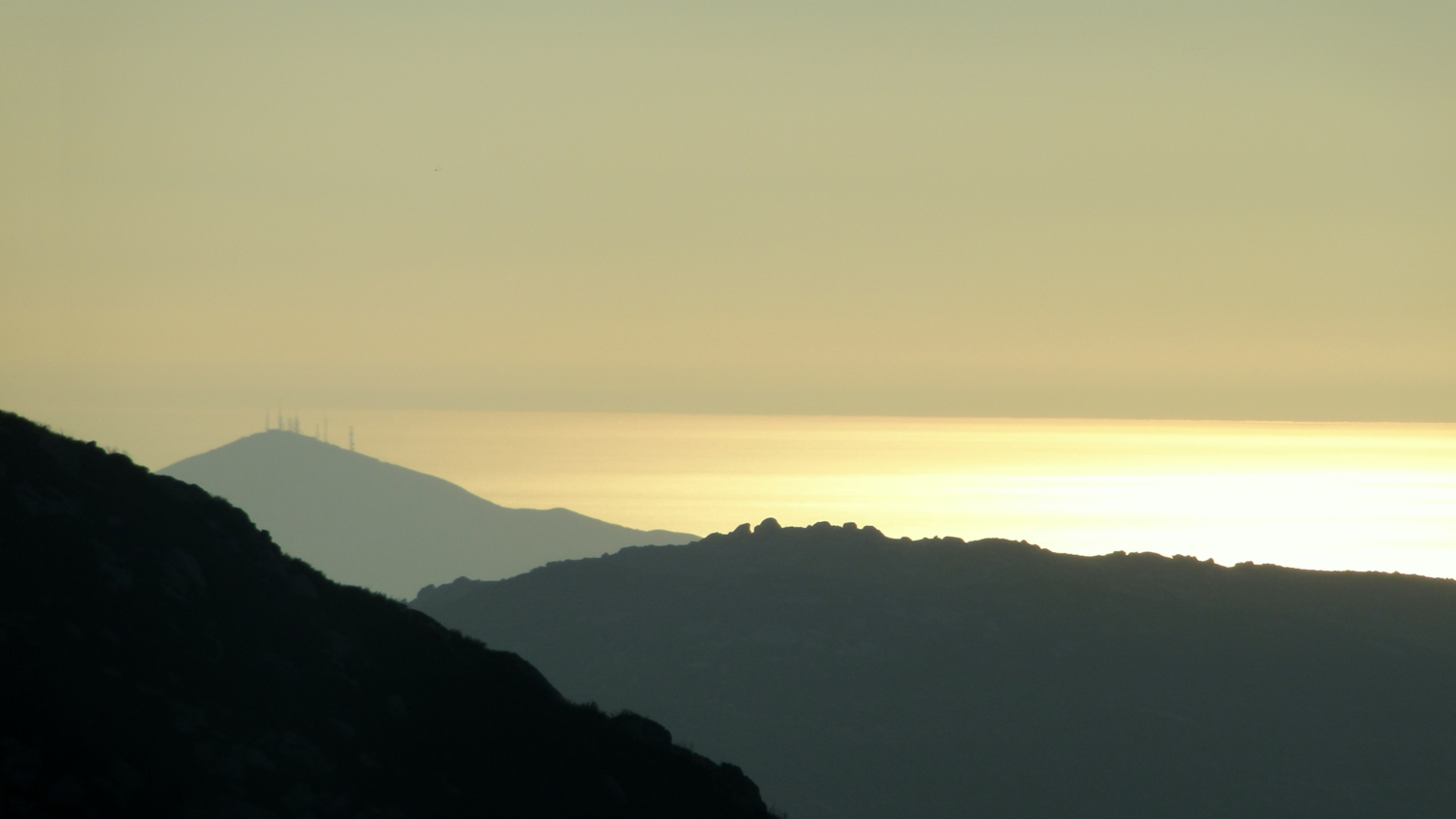 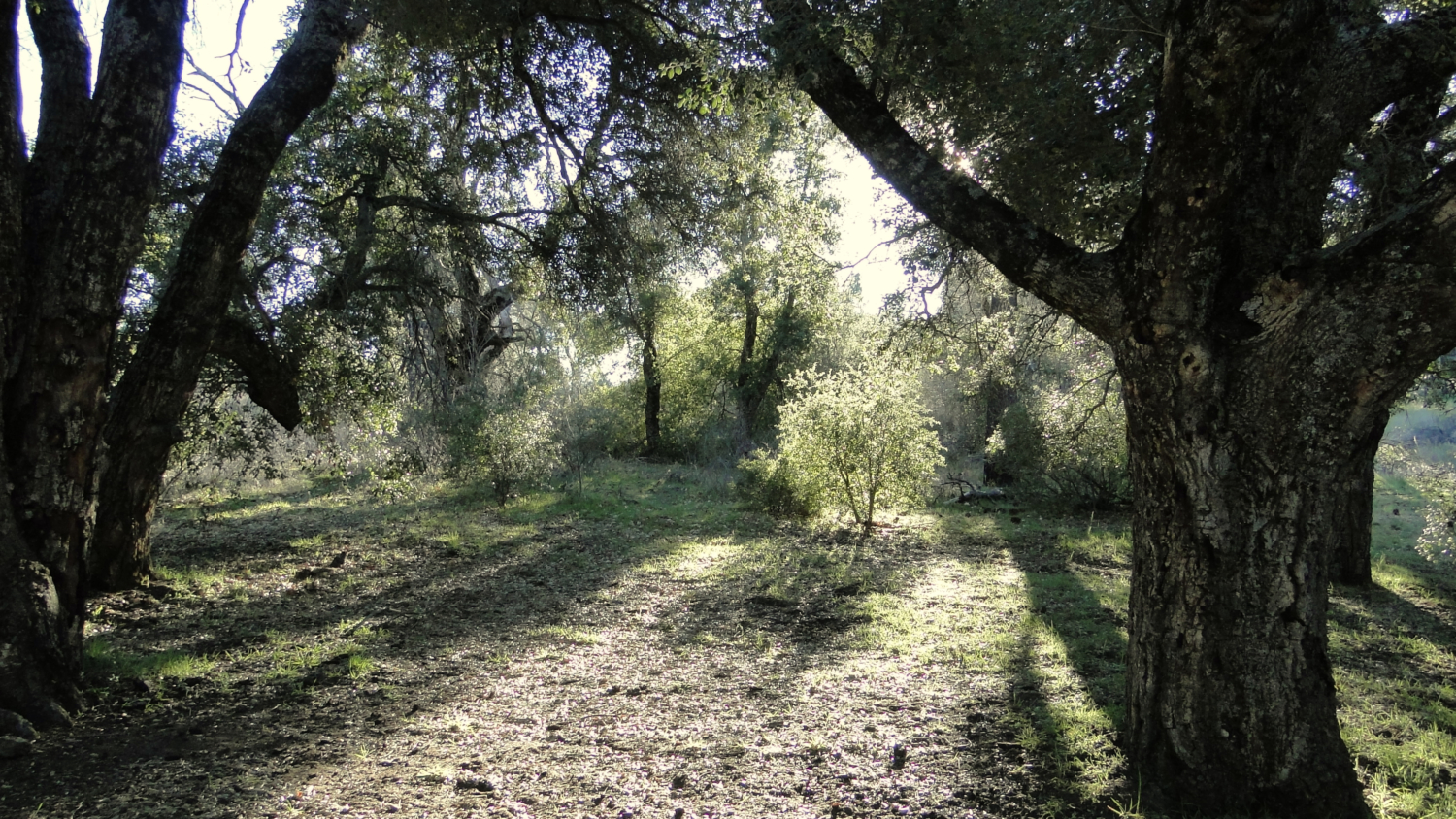 Vegetation encroaches on the path in several spots, particularly before reaching the grasslands on East Mesa. Otherwise, the path is easy to follow and well-maintained.

Nearby car-camping options include Green Valley Campground and Paso Picacho Campground. Backpackers can stay at Granite Springs Primitive Campground at the mid-point of this route.

From San Diego, take I-8 to Highway 79 and turn left from the off-ramp toward Julian and Descanso. At the junction with Old Highway 80, bear left and enter Cuyamaca Rancho State Park. The Sweetwater parking lot is on the right, approximately 7.6 miles from the freeway