Tucked into a magnificent granite bowl in the shadow of towering Mt. Morrison, colorful Convict Lake is one of the finest fall color hikes in the area between Bishop and Mammoth Lakes. This easy and mostly flat 3.3 mile loop hike around the lake’s shore offers views of the spectacular Sherwin Range rising up to the Sierra Crest before plunging into a dense thicket of aspens and cottonwoods near the inlet of Convict Creek, which provide this hike with the majority of its color.

Convict Lake received its name from an 1871 incident in which a group of convicts escaped from a Carson City prison and made their way south in an attempt to evade the posse that was soon hot on its trail. The gang was cornered at the outlet of what is now Convict Creek, where several of the convicts were killed in the encounter. One of the posse members, a banker named Robert Morrison, was killed in the shootout, and nearby Mt. Morrison was named in his honor. 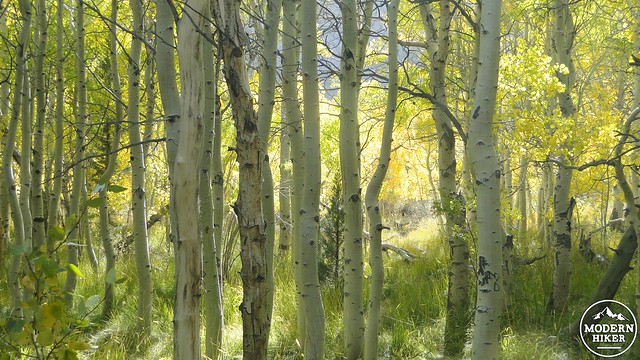 Today, the lake is a popular fishing and camping destination. Fishing on the lake is in such high demand that the National Forest re-stocks the lake weekly with brown and rainbow trout grown in a nearby fish hatchery. It’s not unusual to find people out in boats on the inky blue waters, while you’ll also likely encounter folks in the picnic and campground on the southeast end of the lake. 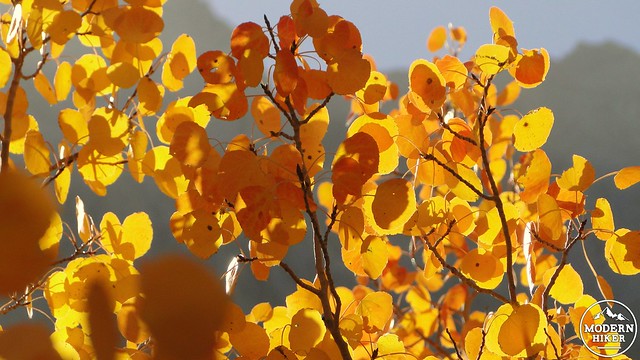 You will find the trailhead for the hike off to the side of the developed area of the lakeshore. The trailhead is on the east side of the moraine containing the lake, and climbing up and over to get to the loop trail will present the primary climb/descent on the trail. Once on the trail, you will begin a quick climb up a sage-covered slope. You will gain 200 or so feet over .5 miles before you reach the top of the moraine, where you will get your first glimpse of shimmering Convict Lake about 100′ below you. 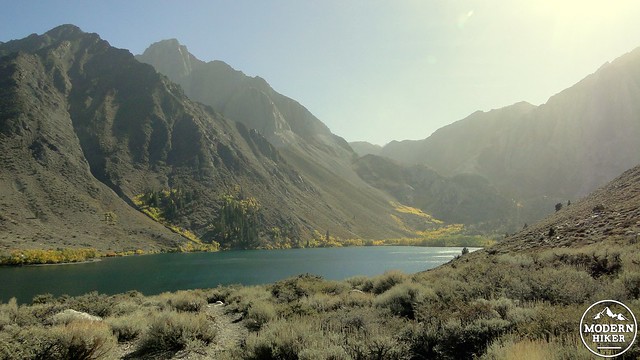 Begin the descent down to the loop trail, which will branch off to the left and the right. There isn’t a wrong way to go on this loop, and eventually you will circle back to this point regardless of your direction. This write-up assumes you will be turning right. After the right turn, you will drop down a bit further to contour around the shore about 50-80′ above the lakeshore. The vegetation remains pretty shrubby, although you will pass under the shade of an occasional Jeffrey pine or white fir. You may begin to notice the lush jungle of vivid yellow and orange foliage toward the west side of the lake which is now a little under a mile away.

Continue on along the shore until the trail makes a bend to the left to follow the shoreline into the aspens and cottonwoods. These trees are supported by Convict Creek, which comes tumbling down the slopes out of Convict Canyon before draining into the placid blue waters of the lake. You will pass a trail which begins to climb up into the mountains before eventually crossing the Sierra Crest. Pass the trail, and plunge into the trees. 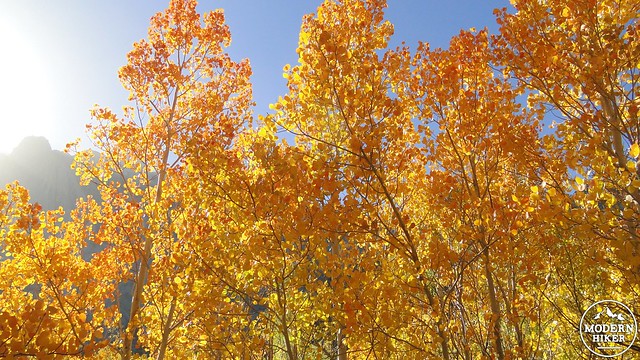 The trail will travel through dense thickets of cottonwoods and aspens, which will have attained hues ranging from lime green to yellow to gold to vivid, fiery orange, depending on recent conditions. Typically, the fall color is at its best from early to mid-October when there are warm days and cold nights, minimal snow, and a lack of wind. The snow and the wind both tend to strip the leaves from the trees, leaving a colorful litter on the ground, but little to no foliage on the branches. It is therefore wise to check weather conditions prior to a visit to ensure that conditions have not deteriorated. In addition to weather conditions, it is also helpful to check the always excellent California Fall Color blog, which provides up to the day information about what locations are peaking in fall color. 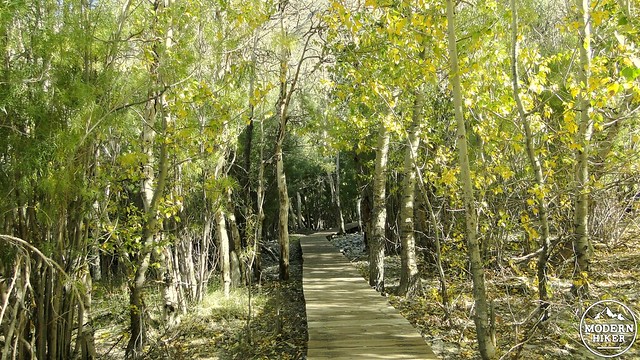 You will pass through the thickets of trees until coming to a boardwalk which passes over the multiple branches and swampy ground at the Convict Creek inlet. This section is fairly brief – perhaps a .25 of a mile – but it is an absolutely enchanting stretch of trail upon which you can spend an enjoyable hour or more exploring the brilliant foliage. 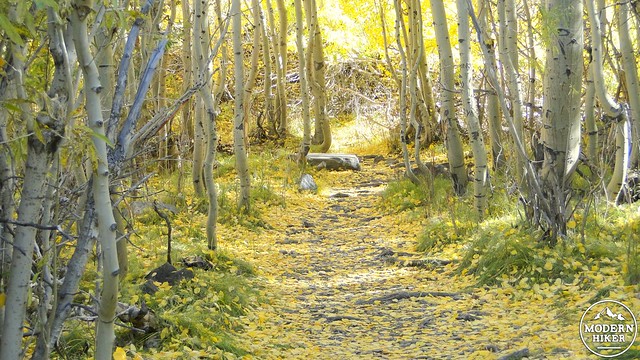 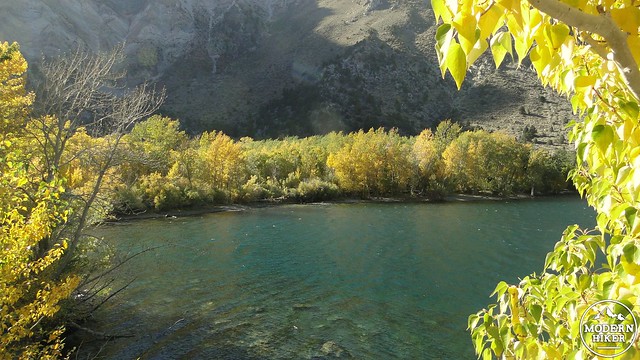 All good things come to an end, and soon the trees will thin out as the trail makes a hard bend to the left to return to the campground and picnic area. Along the way back, you will continue to pass a few stunted groves of aspens crowded around an occasional towering white fir. As the return trip follows the south shore below a north-facing slope, the vegetation tends to be a lot heavier in this area due to long-lingering snow. A few patches of trees occupy a handful of outcrops that offer great views back to the west end of the lake and its ribbon of gold and orange foliage. 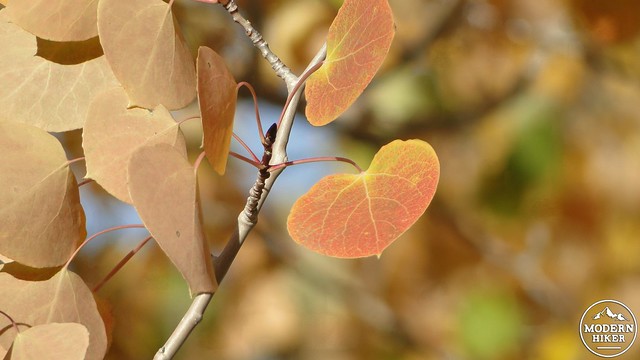 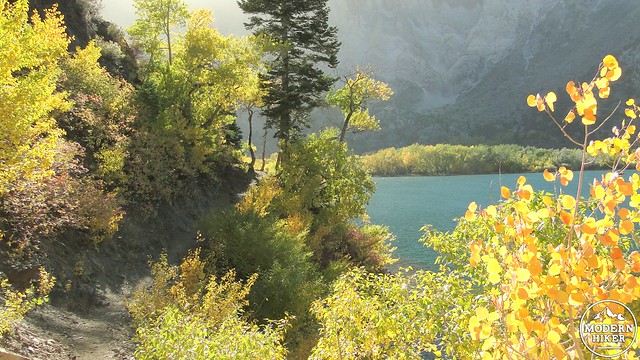 Soon, the trail will reach the campground and continue bearing left past a small harbor. After the harbor, you will have returned to the first junction, at which point you will turn right, climb back over the moraine, and begin the descent back to your car. From here, you have the option of exploring any number of the nearby “hot spots” for fall color, including Bishop Canyon, Mammoth, Rock Creek Canyon, June Lakes, and McGee Creek Canyon. 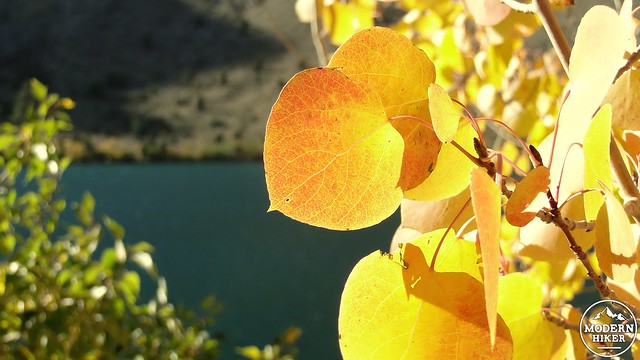 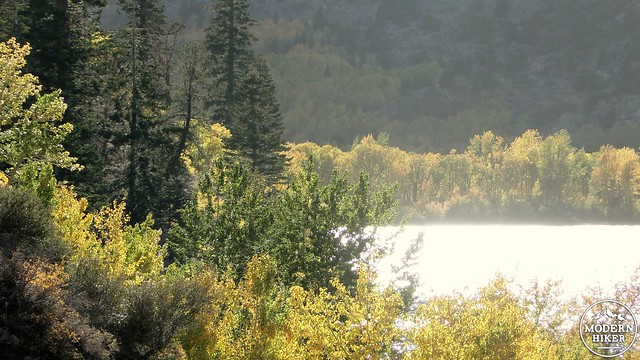 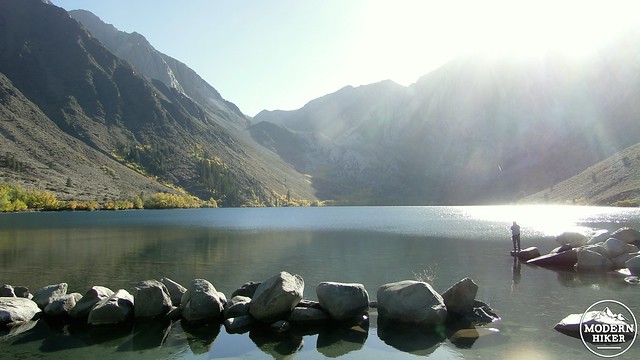 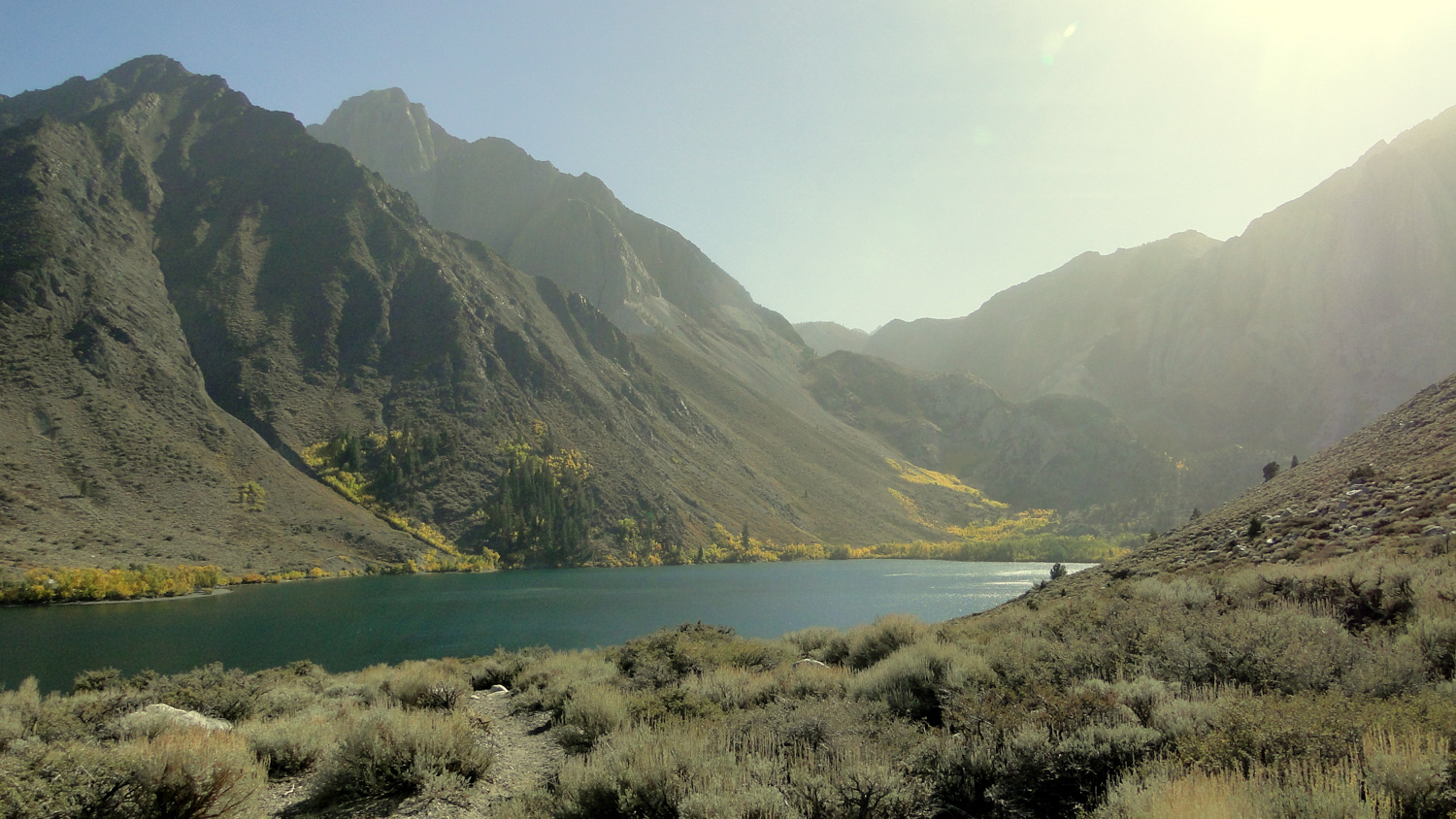 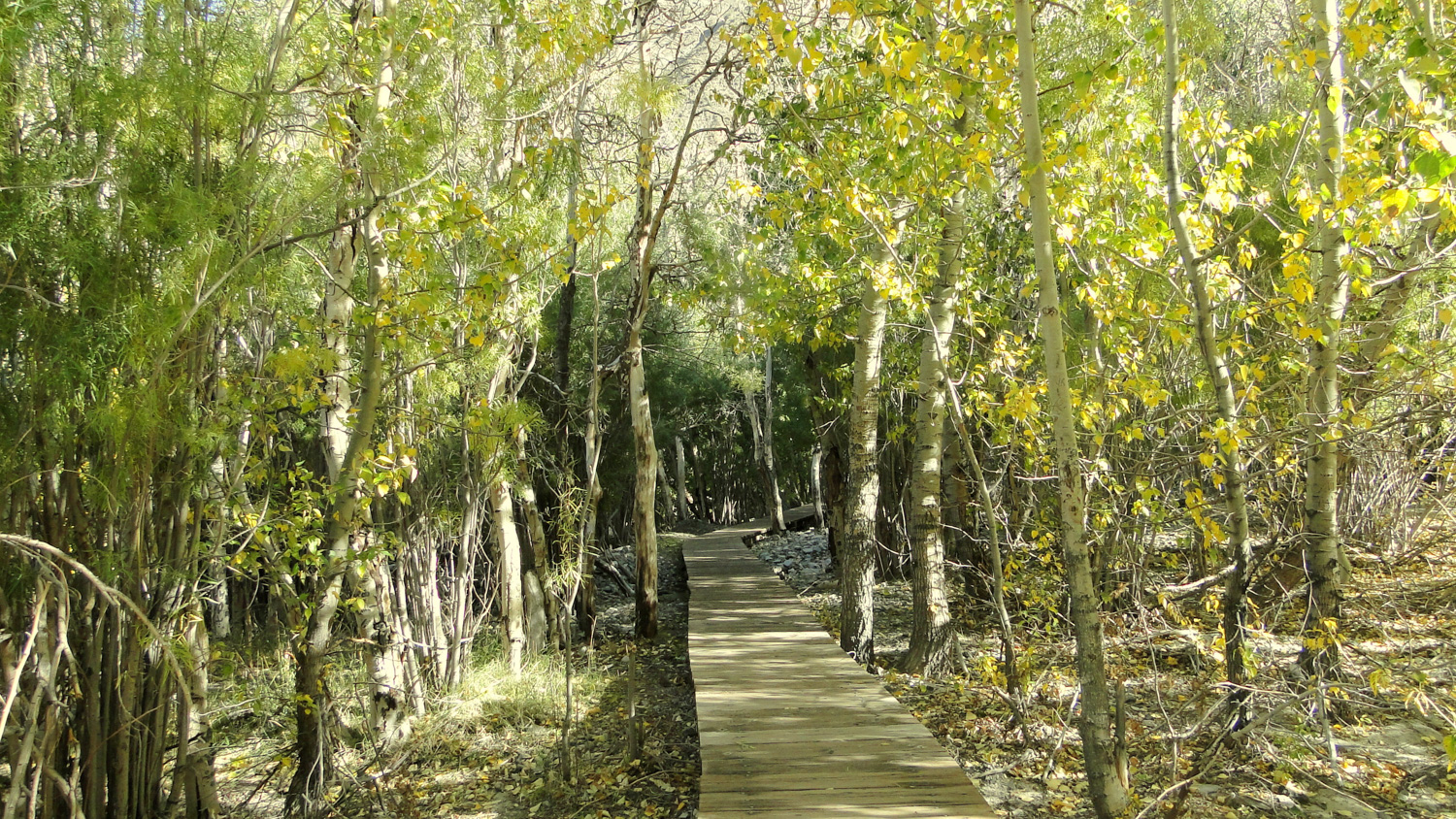 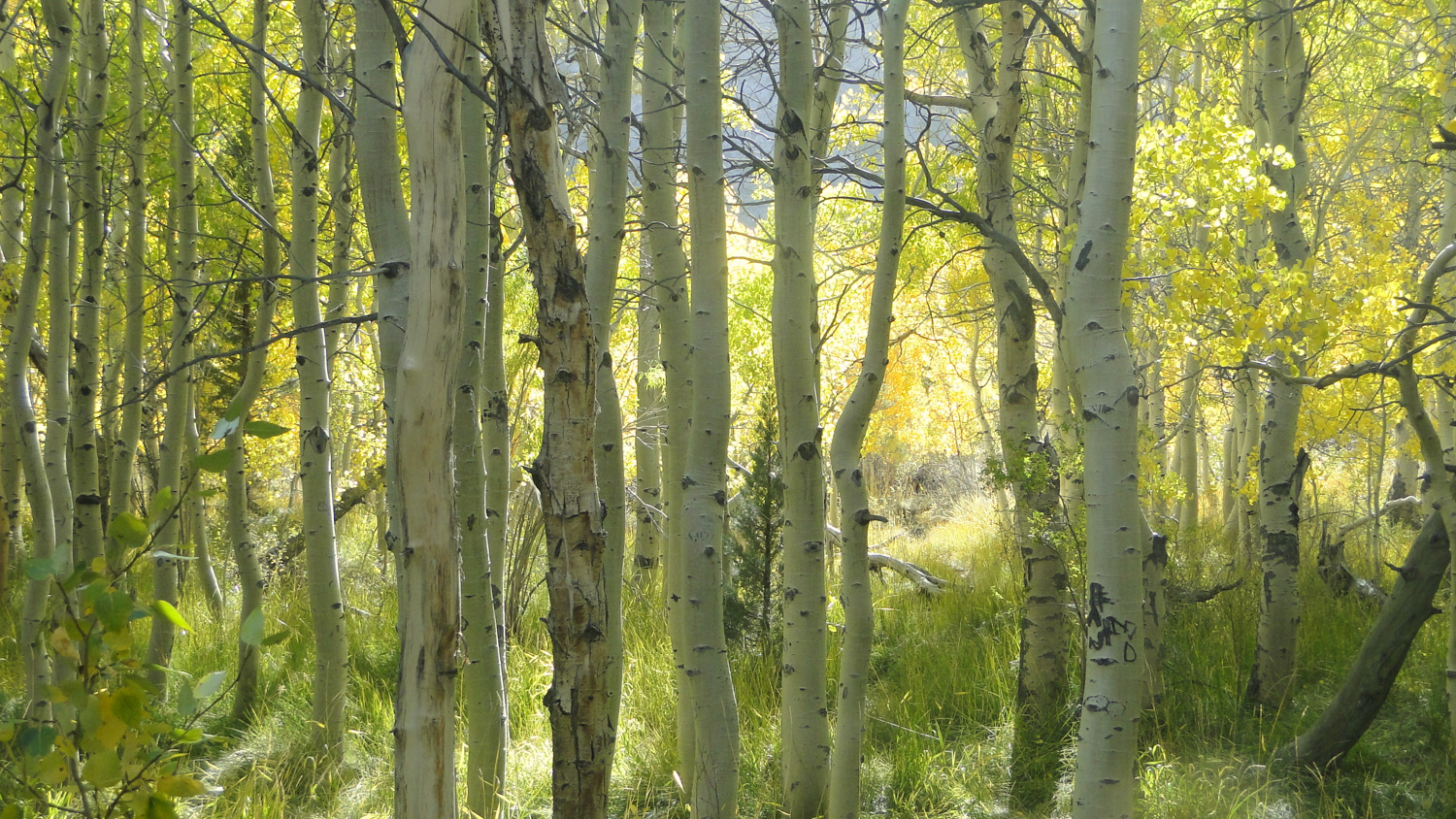 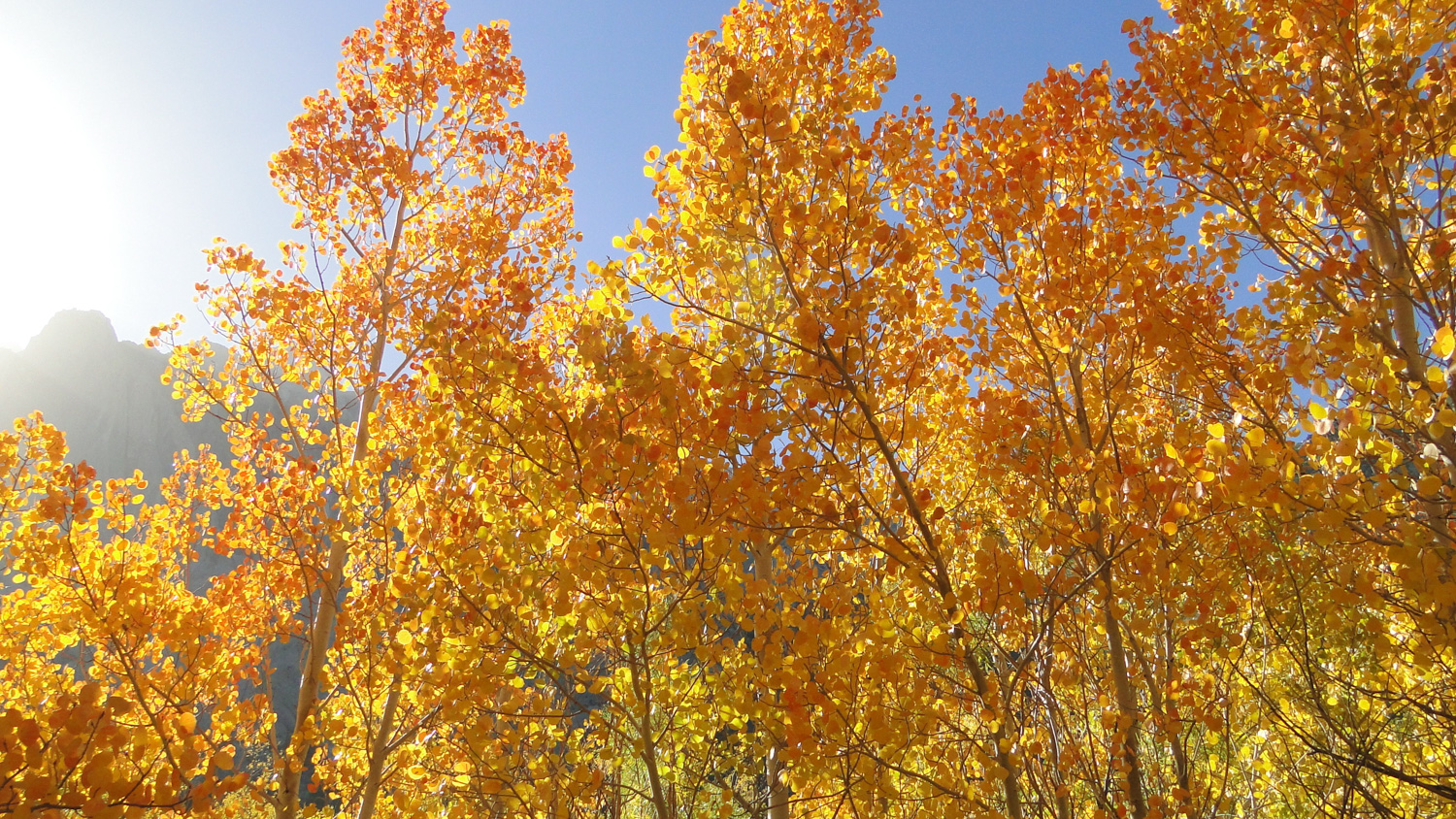 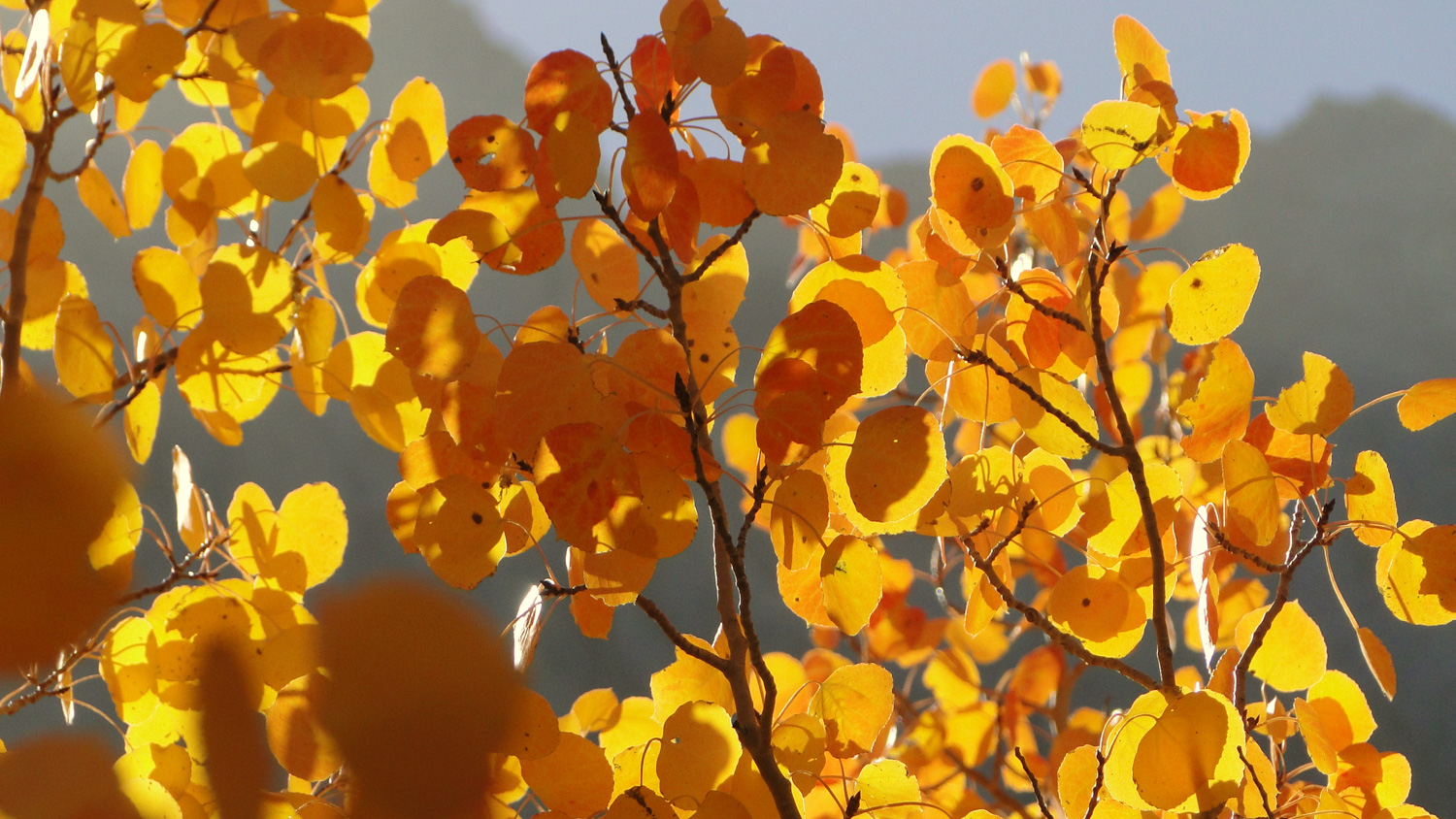 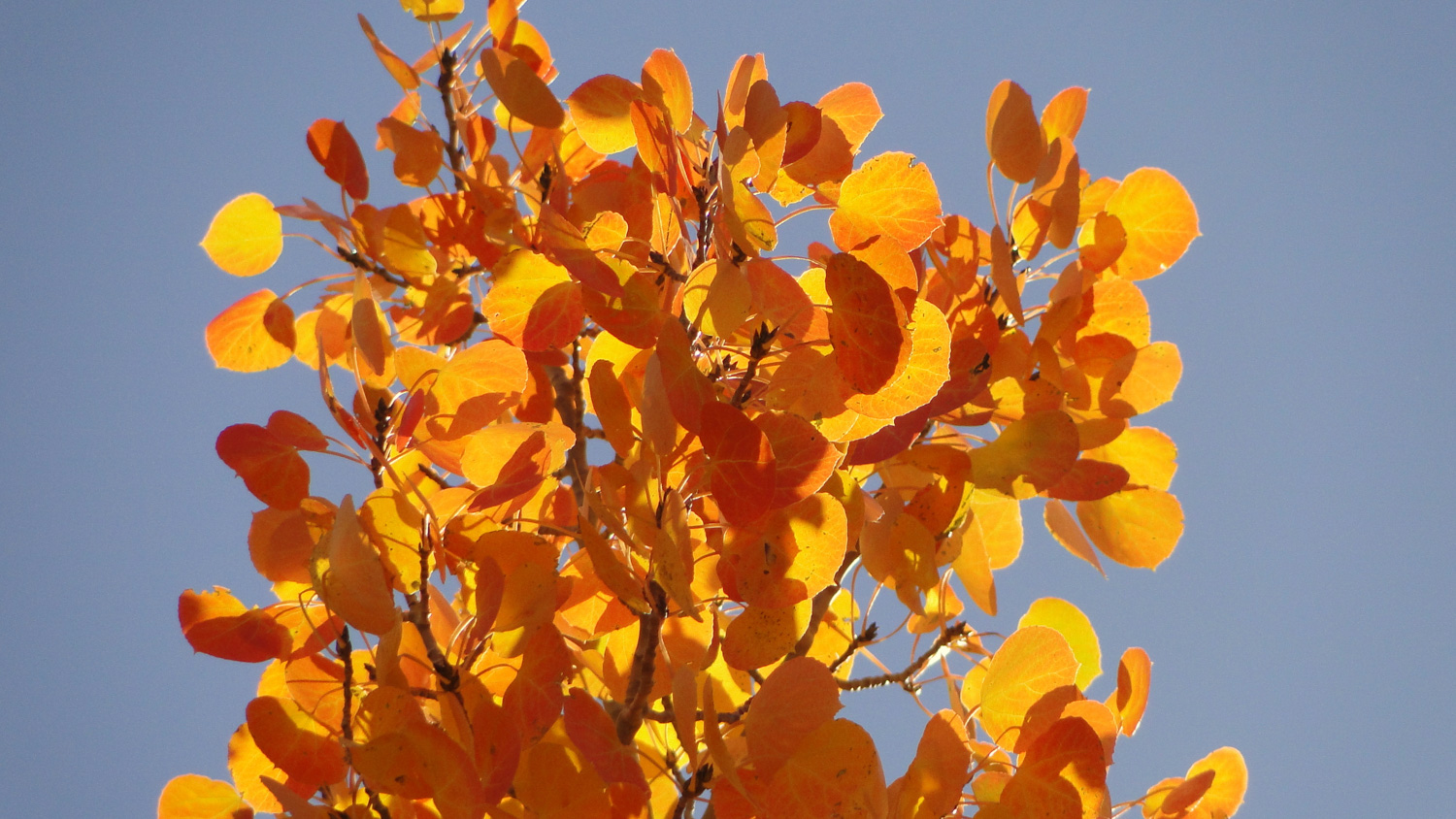 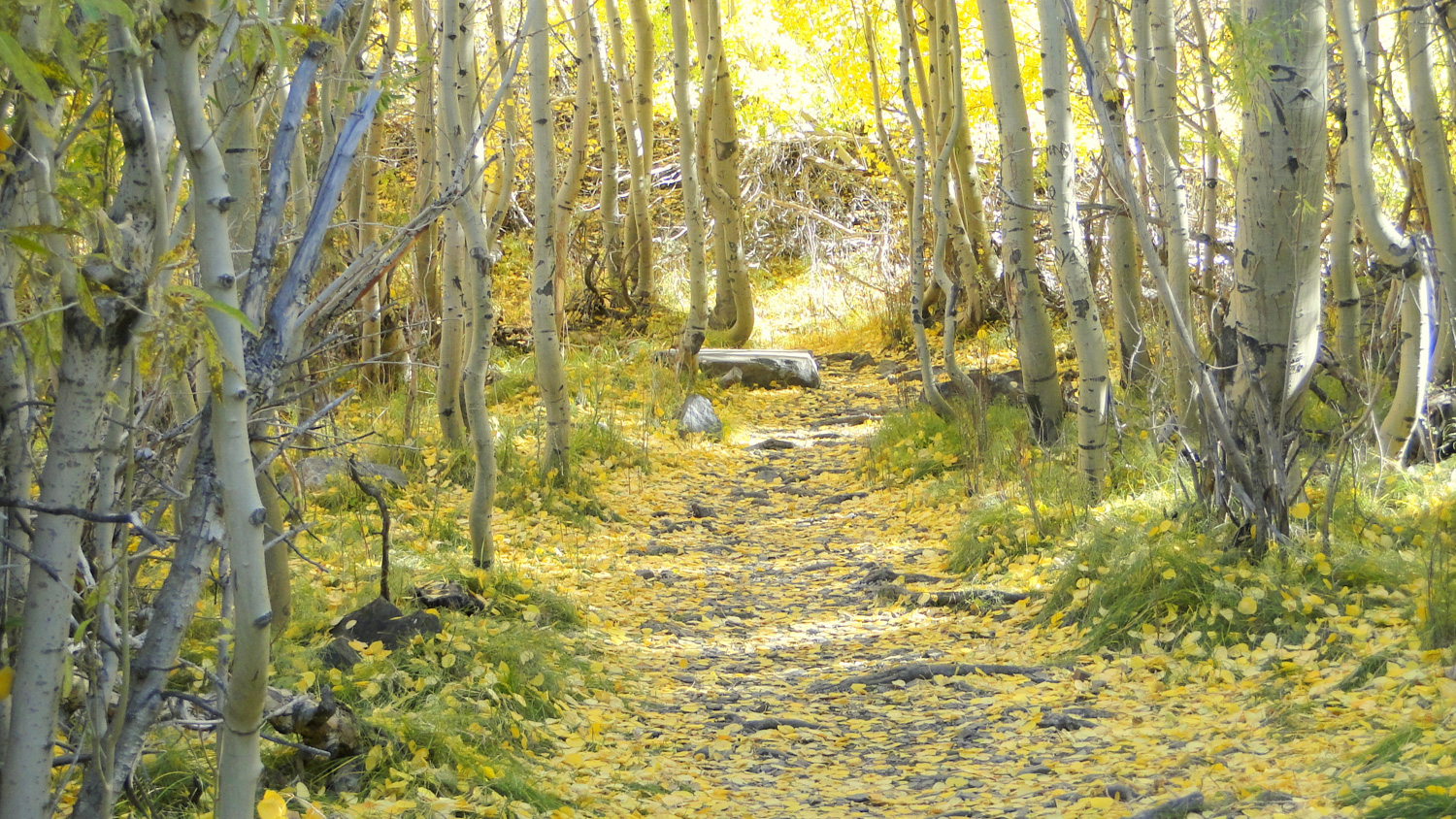 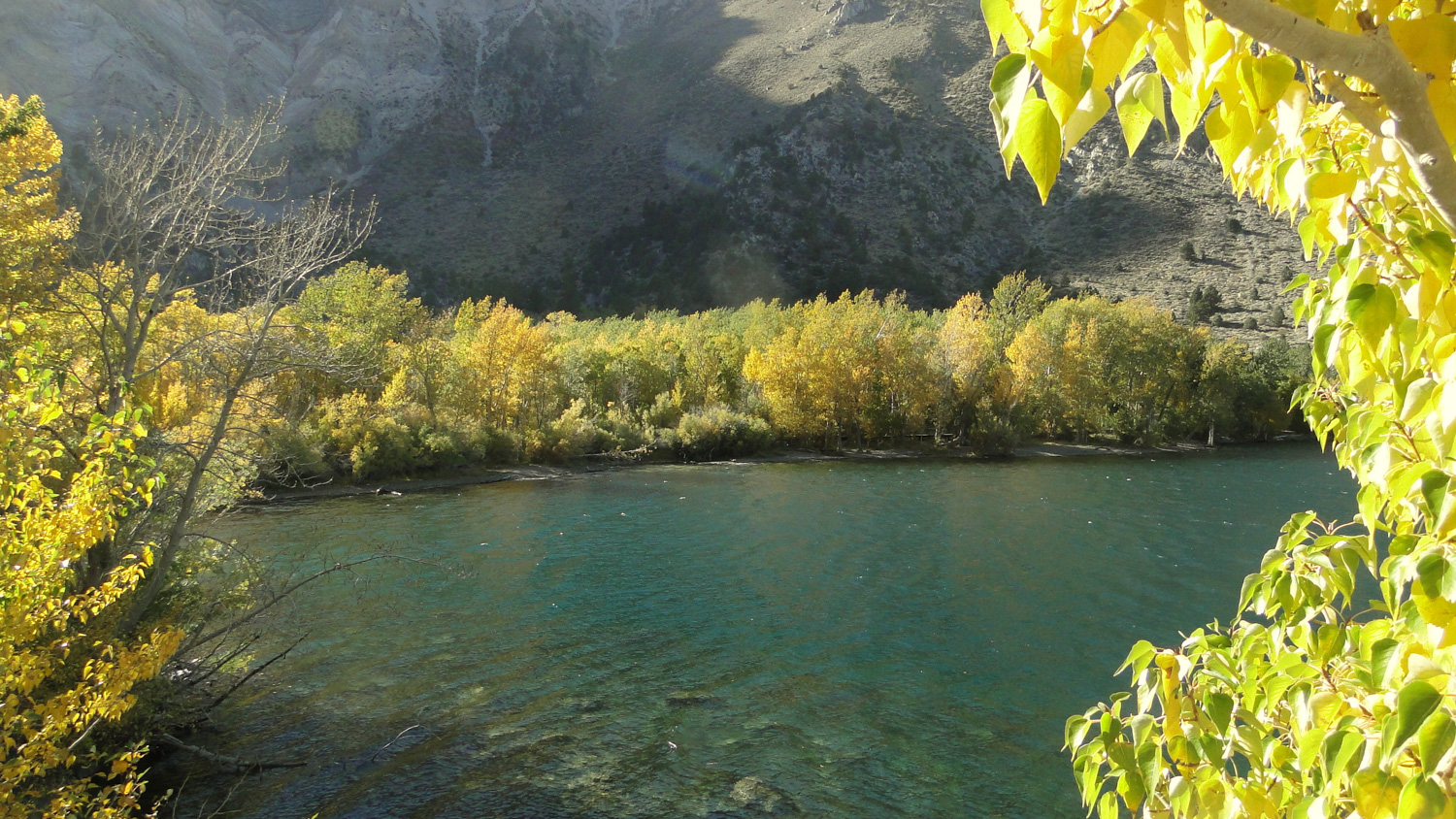 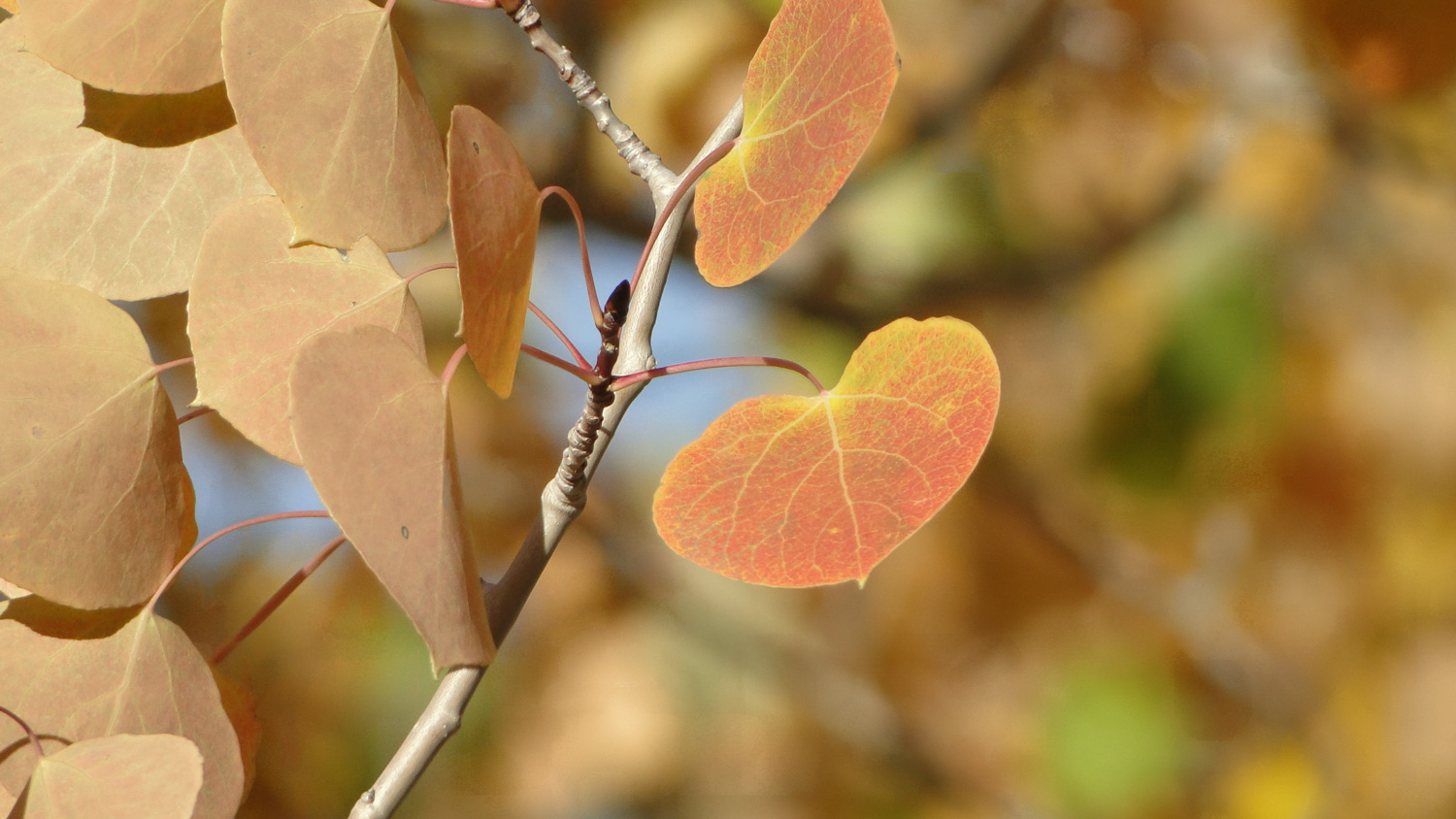 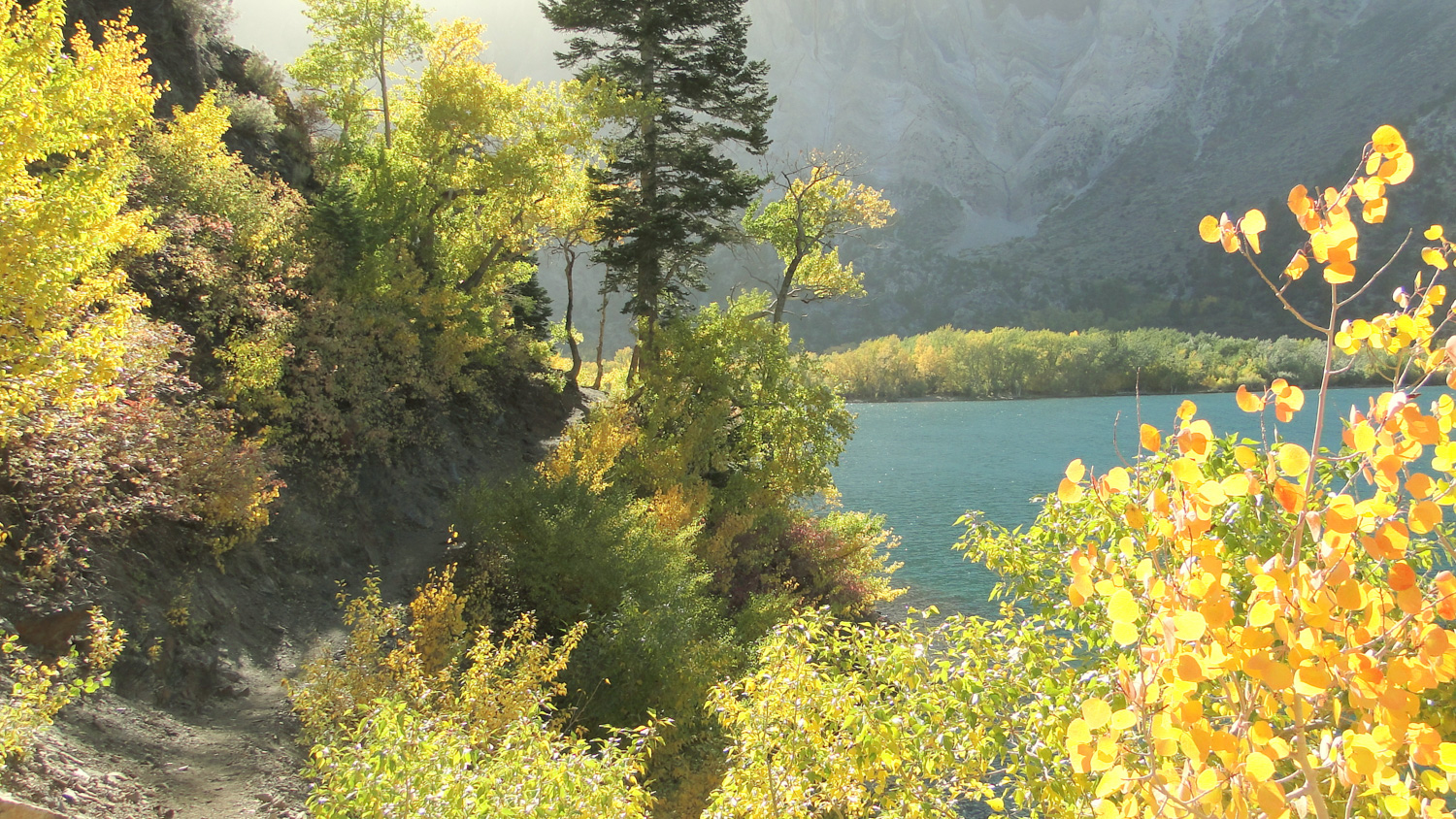 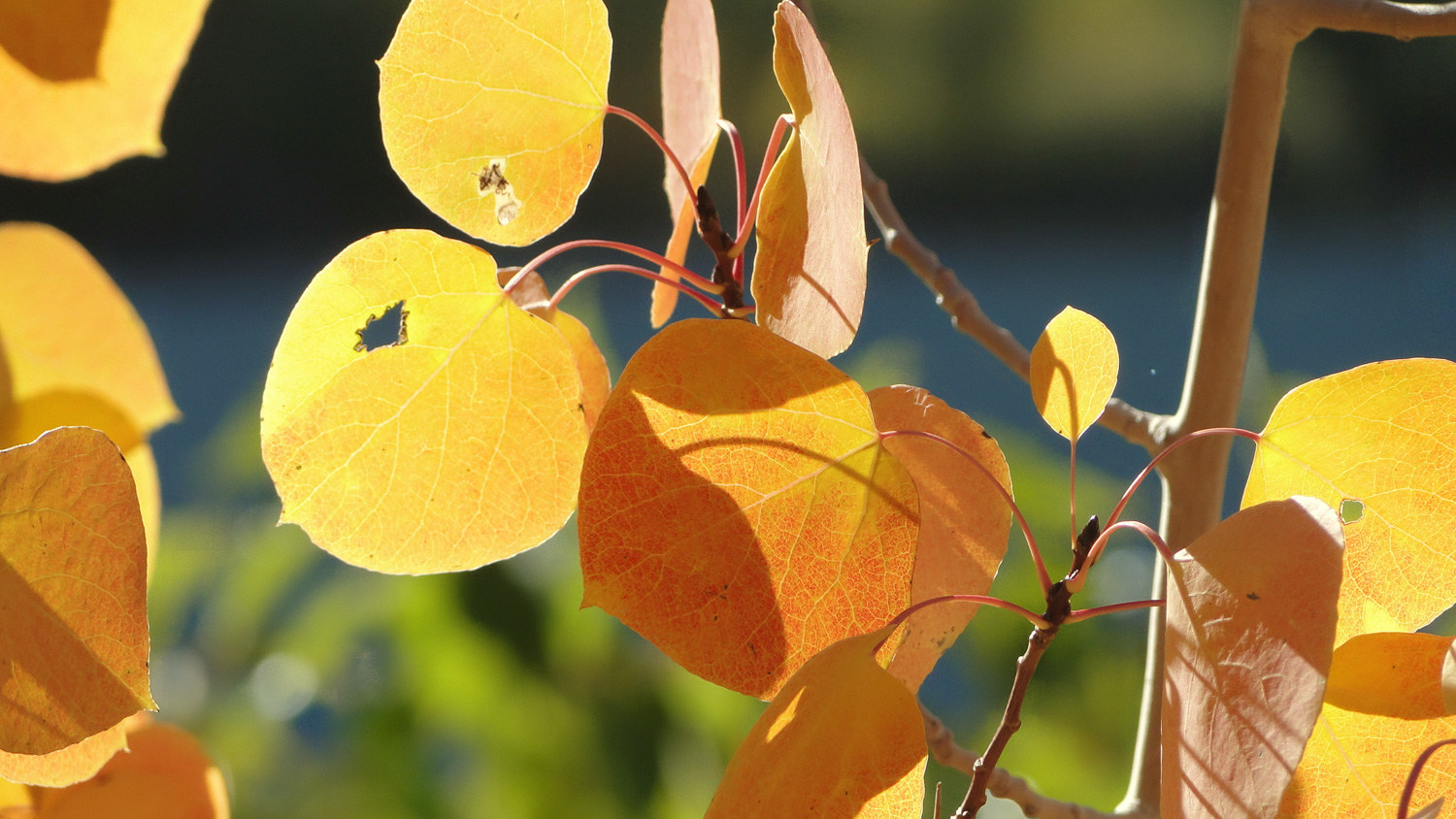 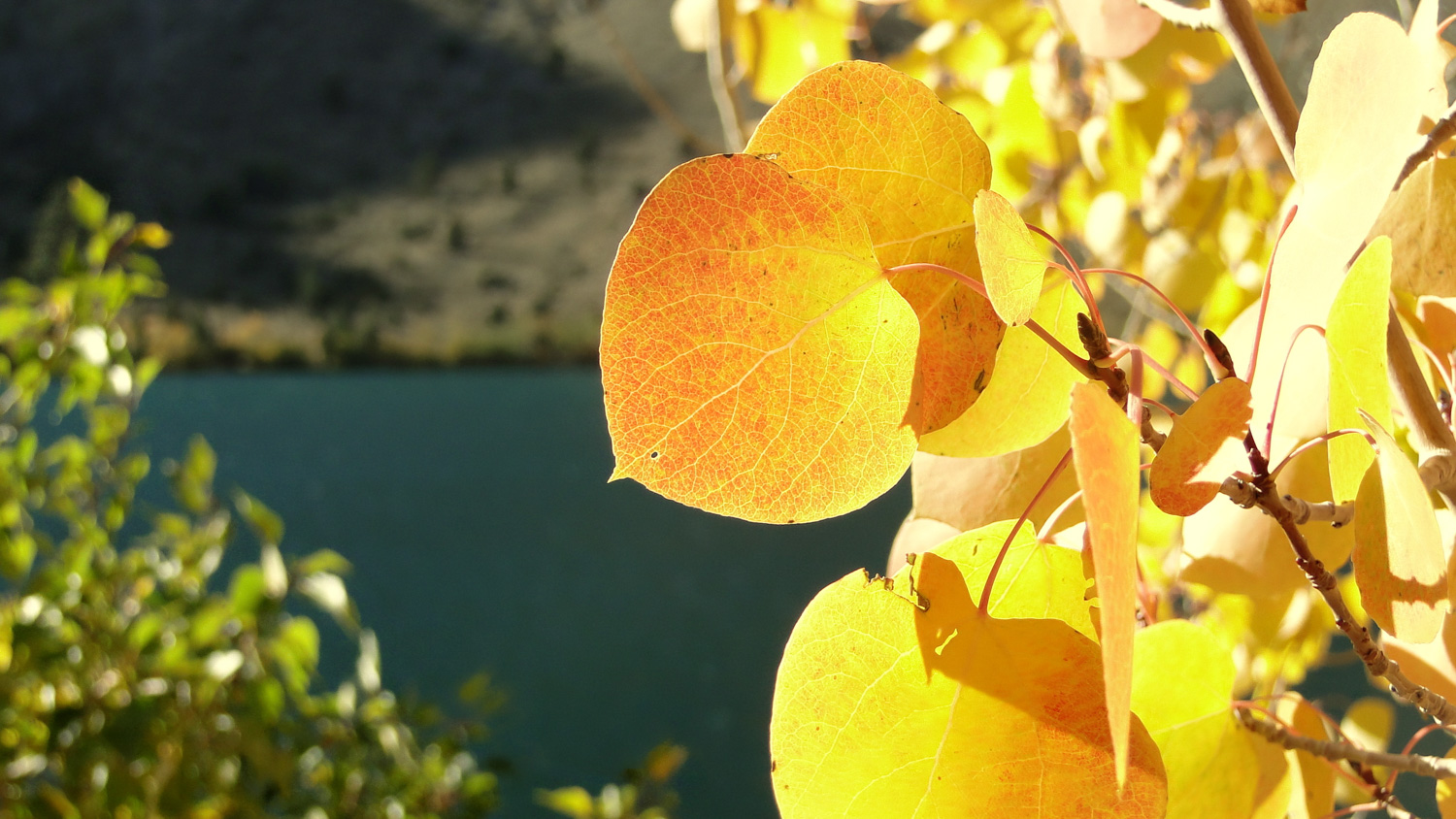 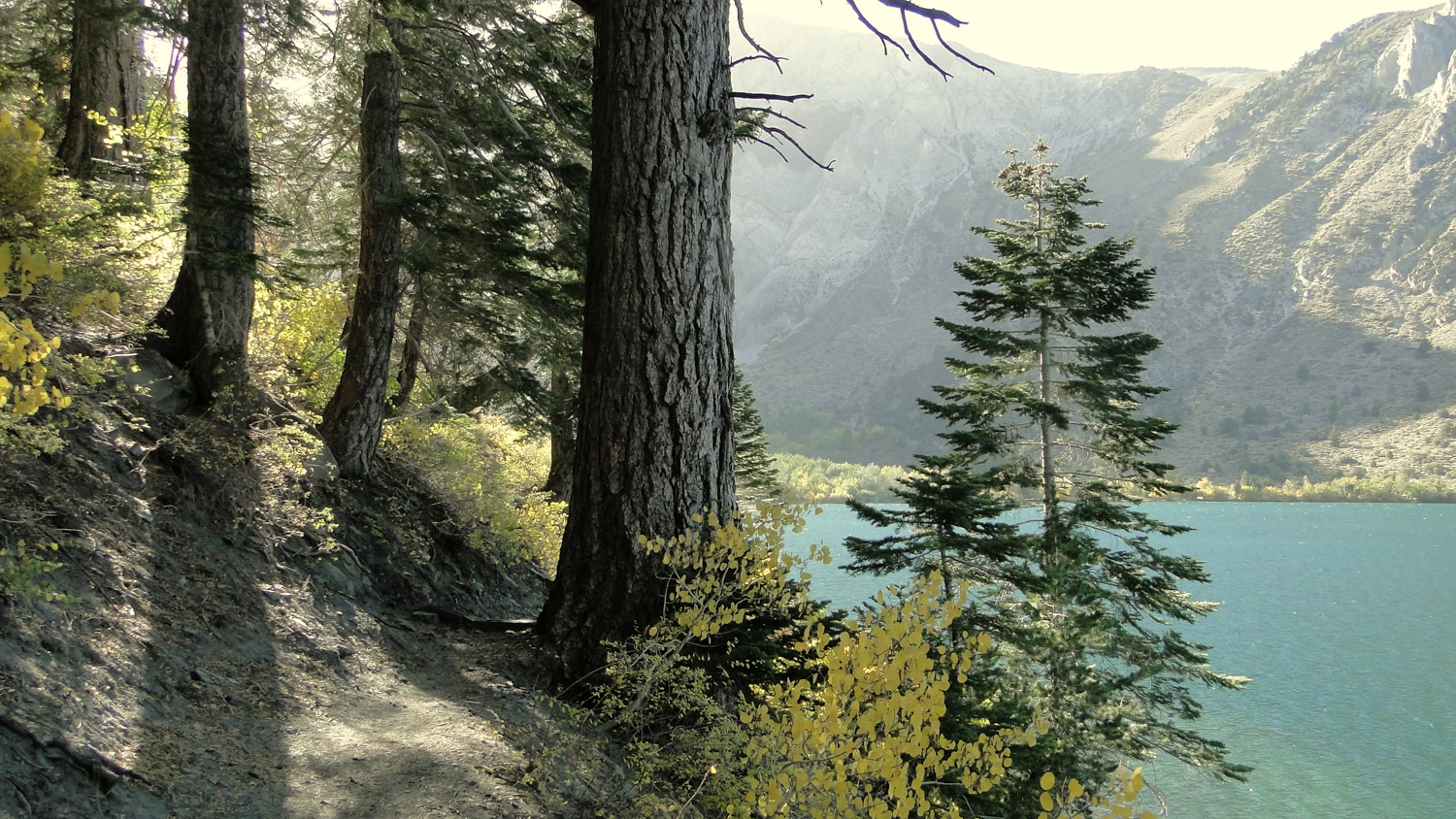 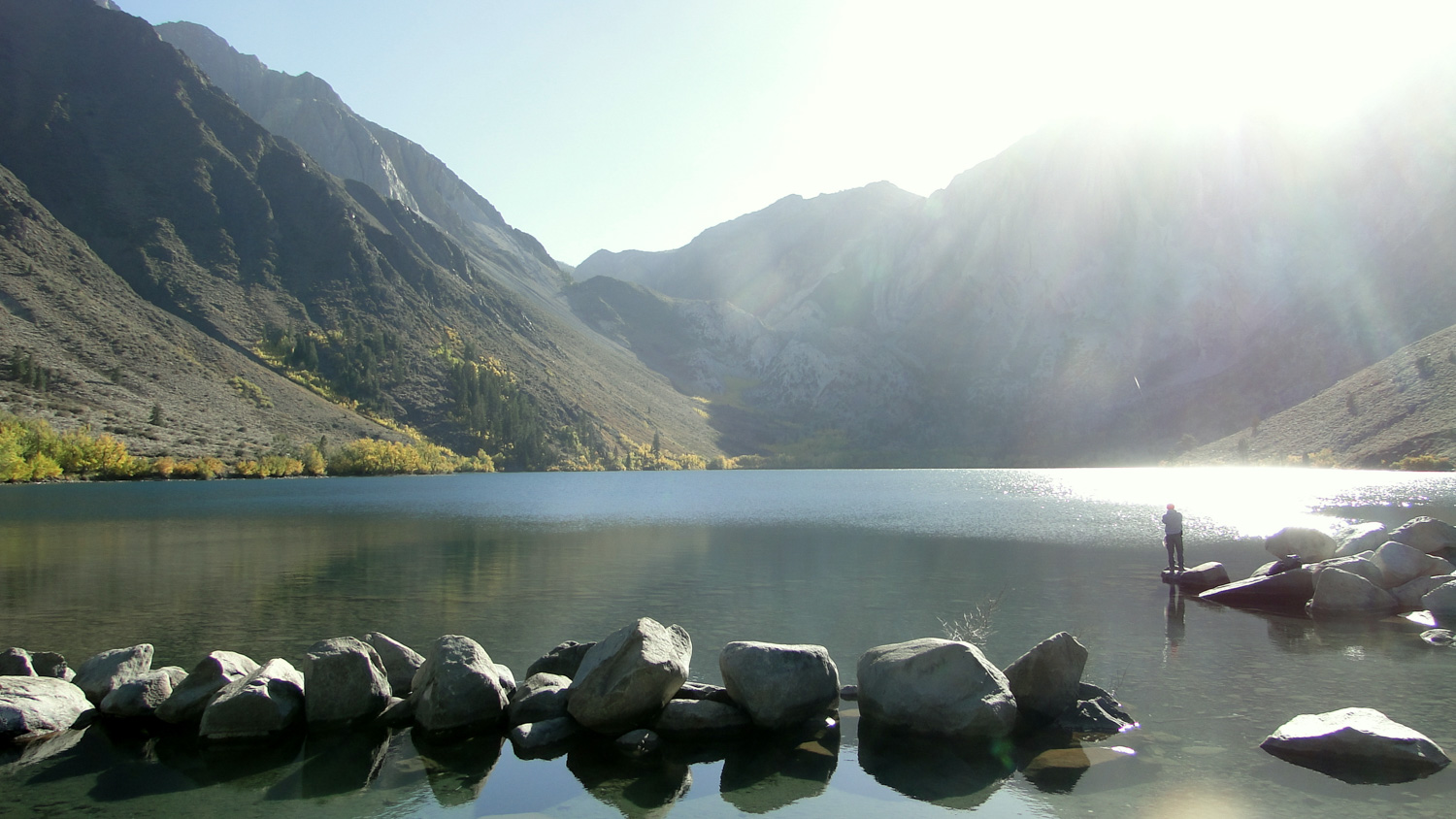 Inyo National Forest operates a campground on the southeast shore of Convict Lake. There is also a resort here for those who prefer a plaster roof over a canvas roof.