Garnet Peak, one of the most scenic and popular spots in the Laguna Mountains, stands high above the Anza-Borrego Desert floor on the edge of the Laguna Escarpment. The precipitous drop from peak to desert floor opens up startling vistas that extend into Arizona when there’s sufficient atmospheric clarity. Normally, hikers have to expend a great deal of energy to obtain views like this, but thanks to easy access, even kids can enjoy the jaw-dropping views. 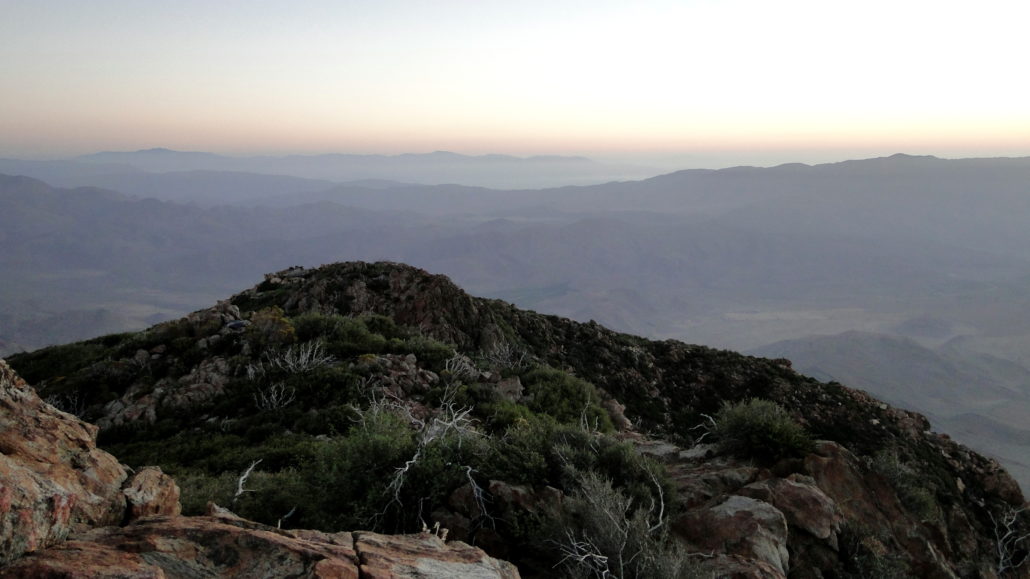 Starting from the small pull-out along Sunrise Highway that can support several cars, follow a connector trail northeast for 0.6 mile to a junction with the Pacific Crest Trail. This connector passes through habitat that experienced a double whammy from the 2003 Cedar Fire and the 2012 Chariot Fire. A few signed Coulter pines and recovering black oaks punctuate the recovering montane chaparral. 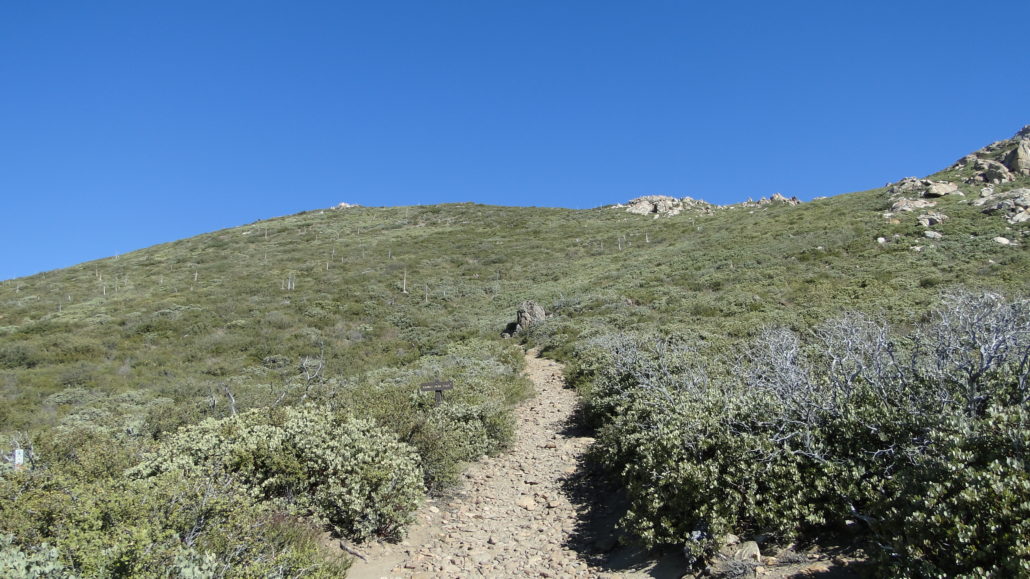 Once at the PCT, pass straight ahead through the junction to continue on a moderate incline along the western shoulder of Garnet Peak. The increasingly rocky trail bends to the north and then east as it wraps around the boulder-studded summit. Make your way with caution; poodle dog bush, a fire-following shrub that induces nasty allergic reactions, has sprouted along the summit. Keep your nose open for a rank, musky odor that recalls a cross between a skunk and cheap marijuana (not that we know about such things). Poodle Dog Bush produces a rash that’s like amplified poison oak — it hits harder, lasts longer, and shows up faster. Thankfully, Poodle Dog only sticks around for the first few years after a fire — after that, it generally gets out-competed by the other native plants and becomes much more rare. 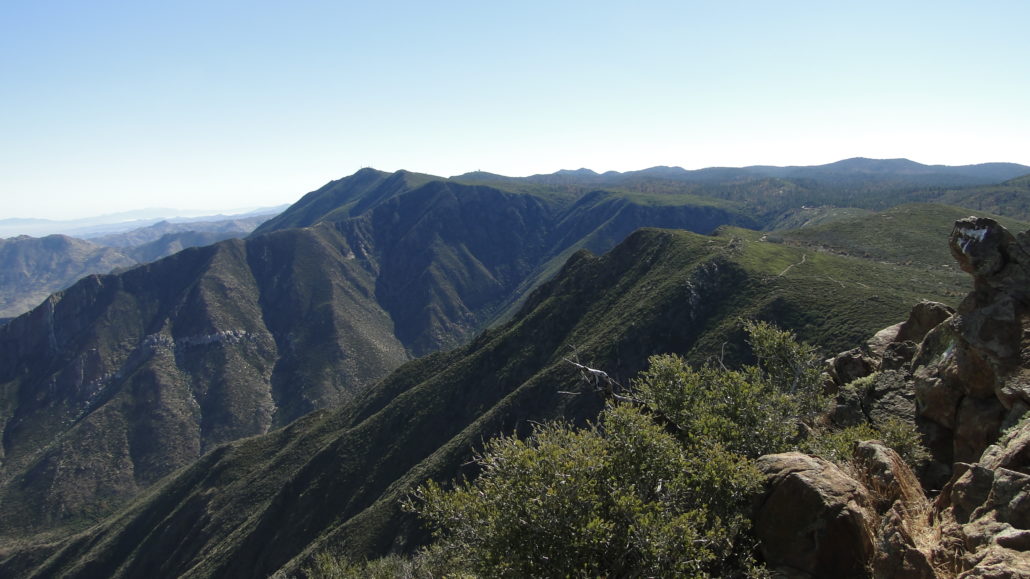 From the summit, you peer down into the depths of Vallecito Valley and the Potrero, bounded to the east by the startling beige granitic wall of the Vallecito Mountains crowned by the wooded summit of Whale Peak. The jagged Sawtooth Mountains and Tierra Blanca Mountains extend east from the Laguna Escarpment and McCain Valley to the south. To the north, the pyramidal form of Granite Mountain stands high above the surrounding environs of Blair Valley, while the lofty ridgeline summits of the Santa Rosa Mountains loom high above Borrego Valley, which is obscured from this view point. 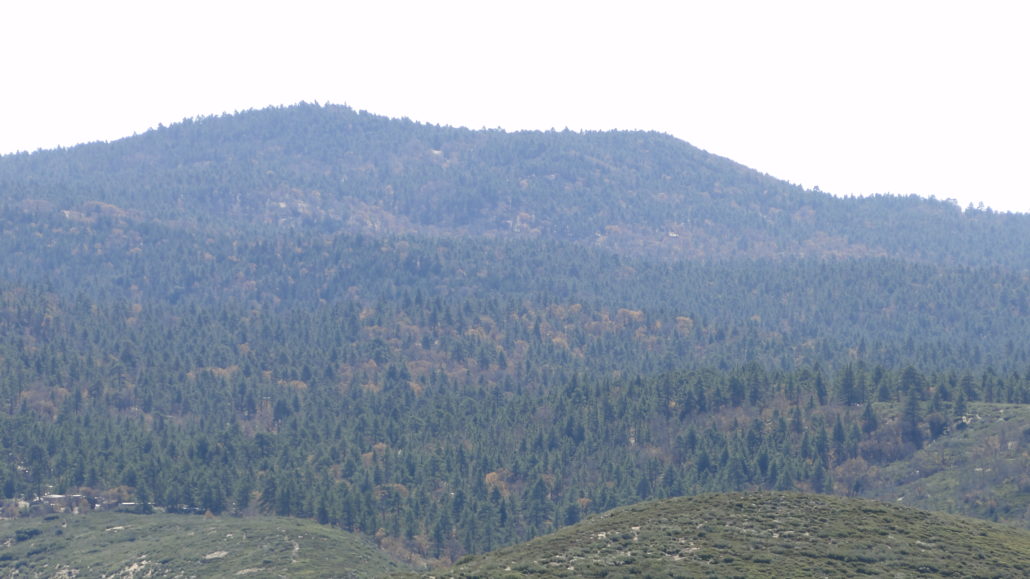 A less startling view awaits those who swing around and look west. Slivers of ocean are apparent on clear days, but the Cuyamaca Mountains remain the dominant landforms on the western skyline. The forested Laguna Plateau undulates south toward Wooded Hill and the distant peaks of Mexico. 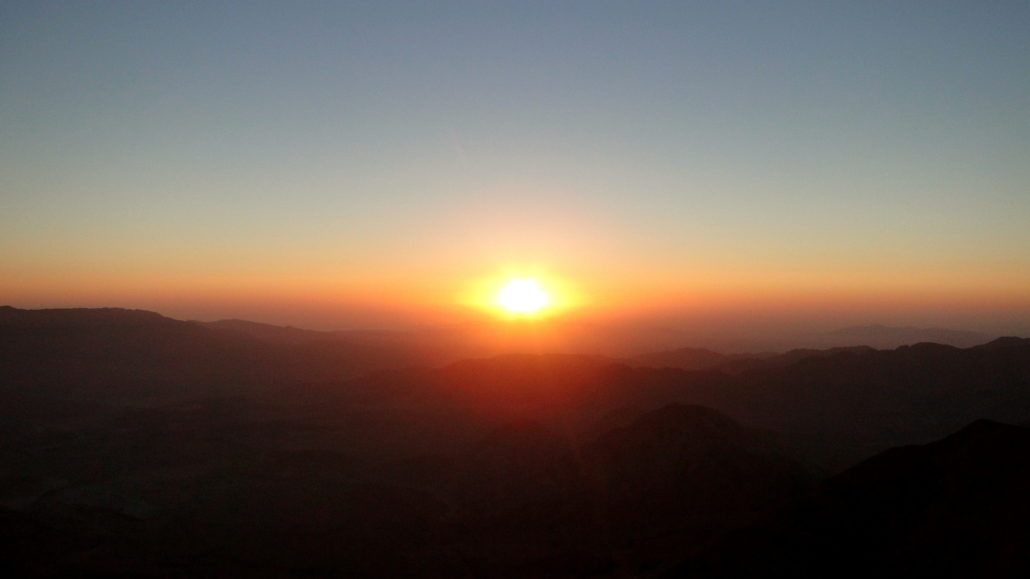 Adventurous hikers who either don’t mind an early wake-up call or who are camping at nearby Laguna Meadows Campground can get a pre-dawn start for an inspiring sunrise over the Anza-Borrego Desert. But remember that no matter what time you choose for your hike, Garnet Peak is one of the windiest spots in the county. 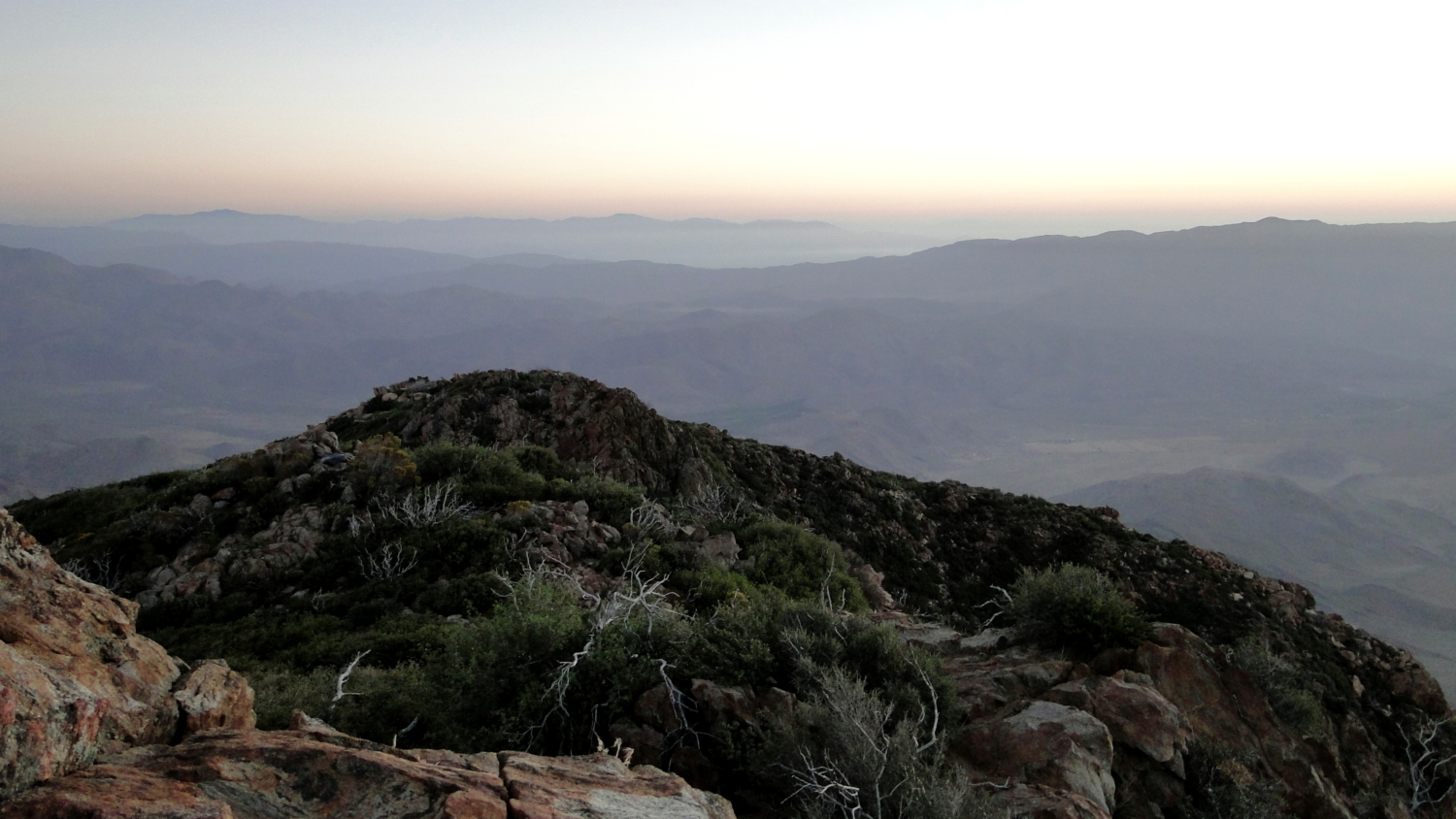 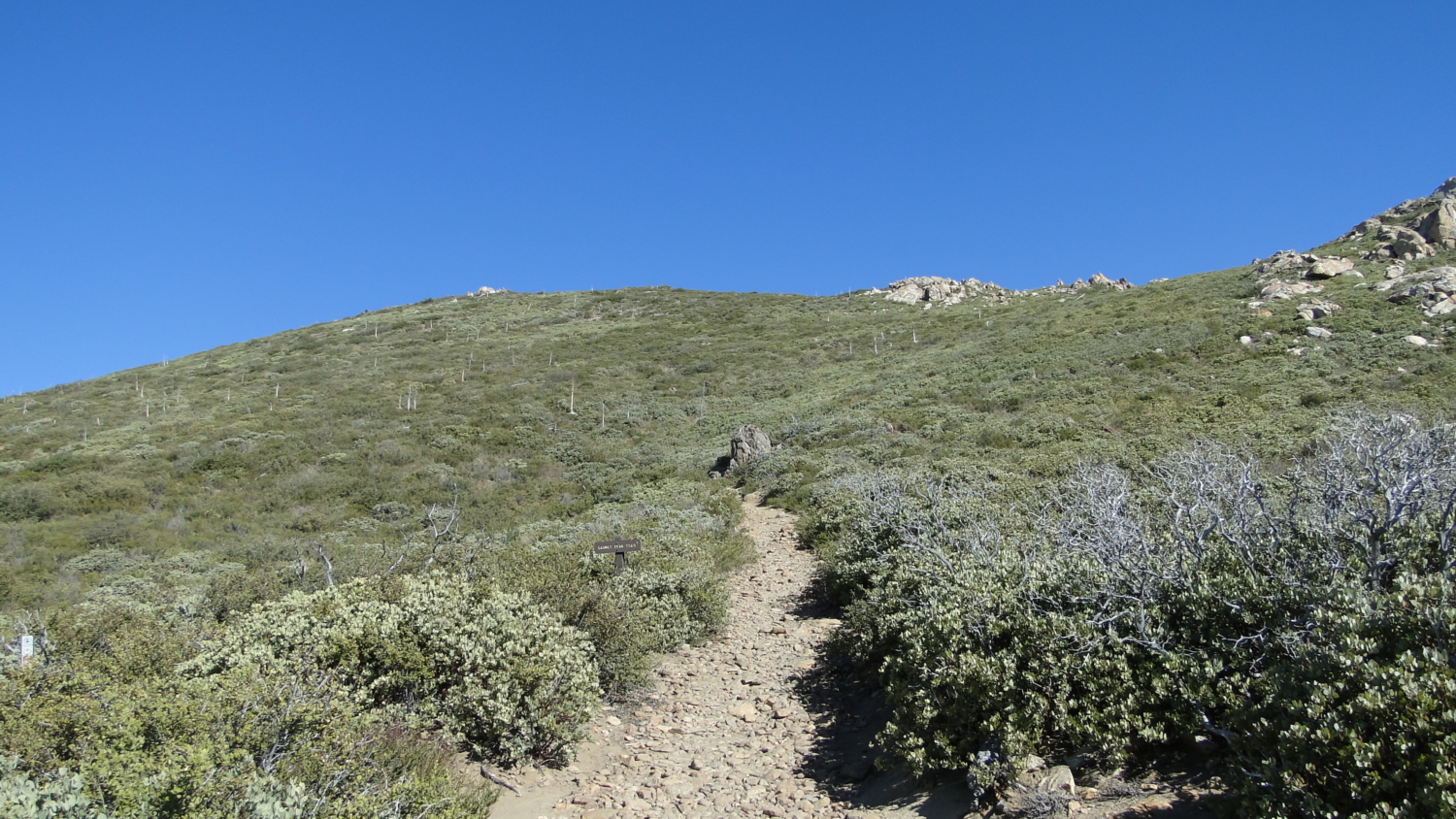 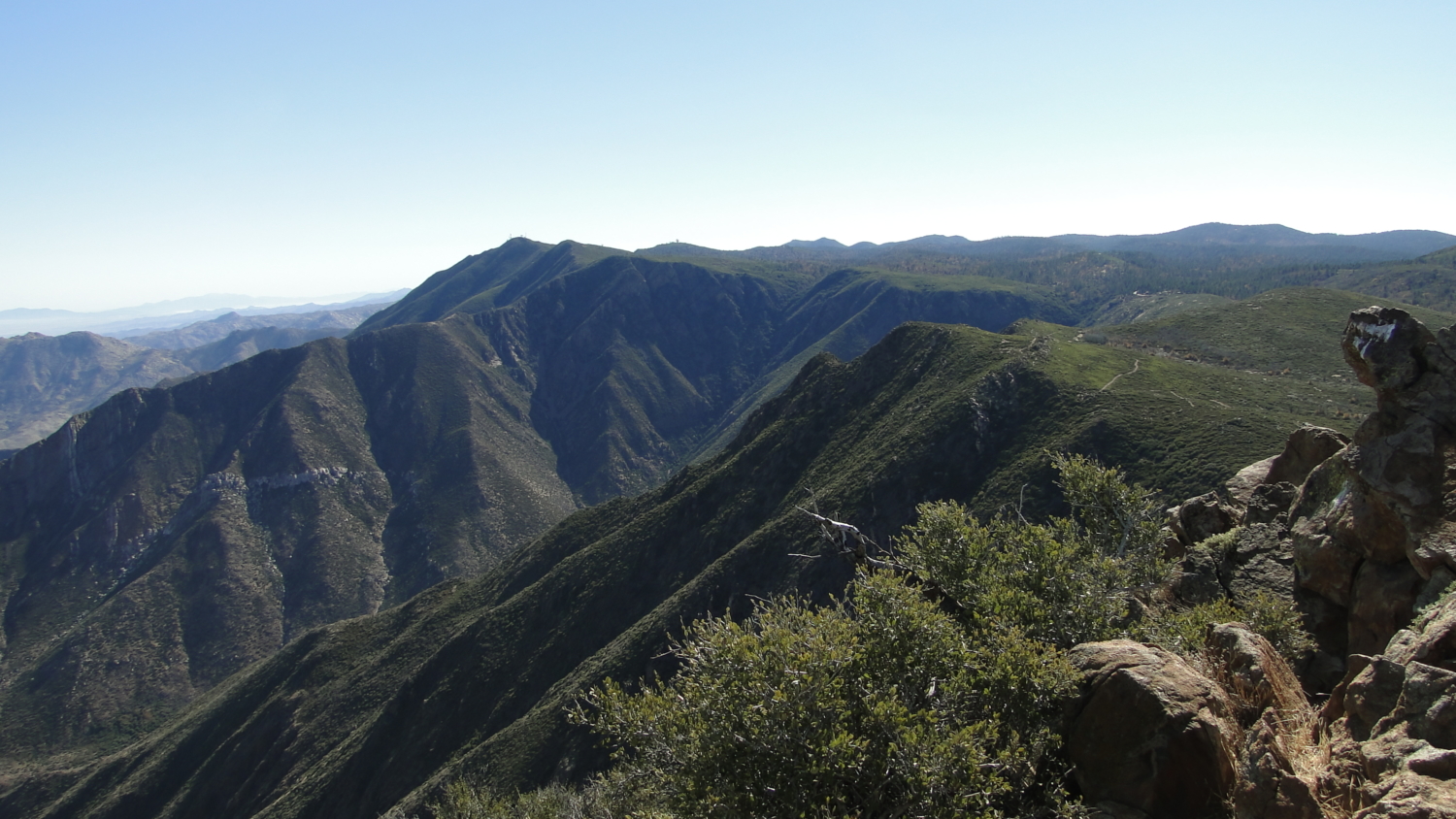 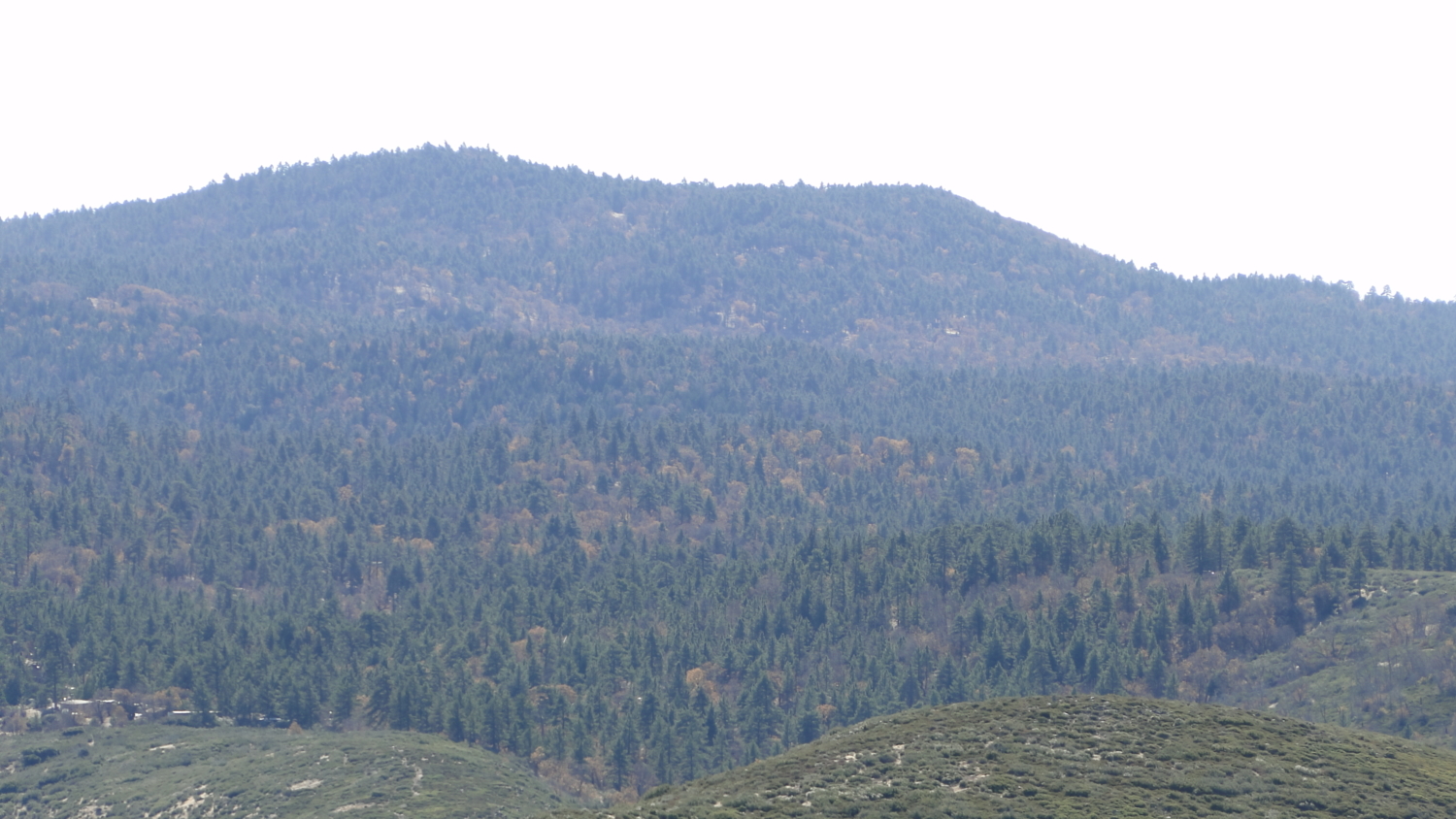 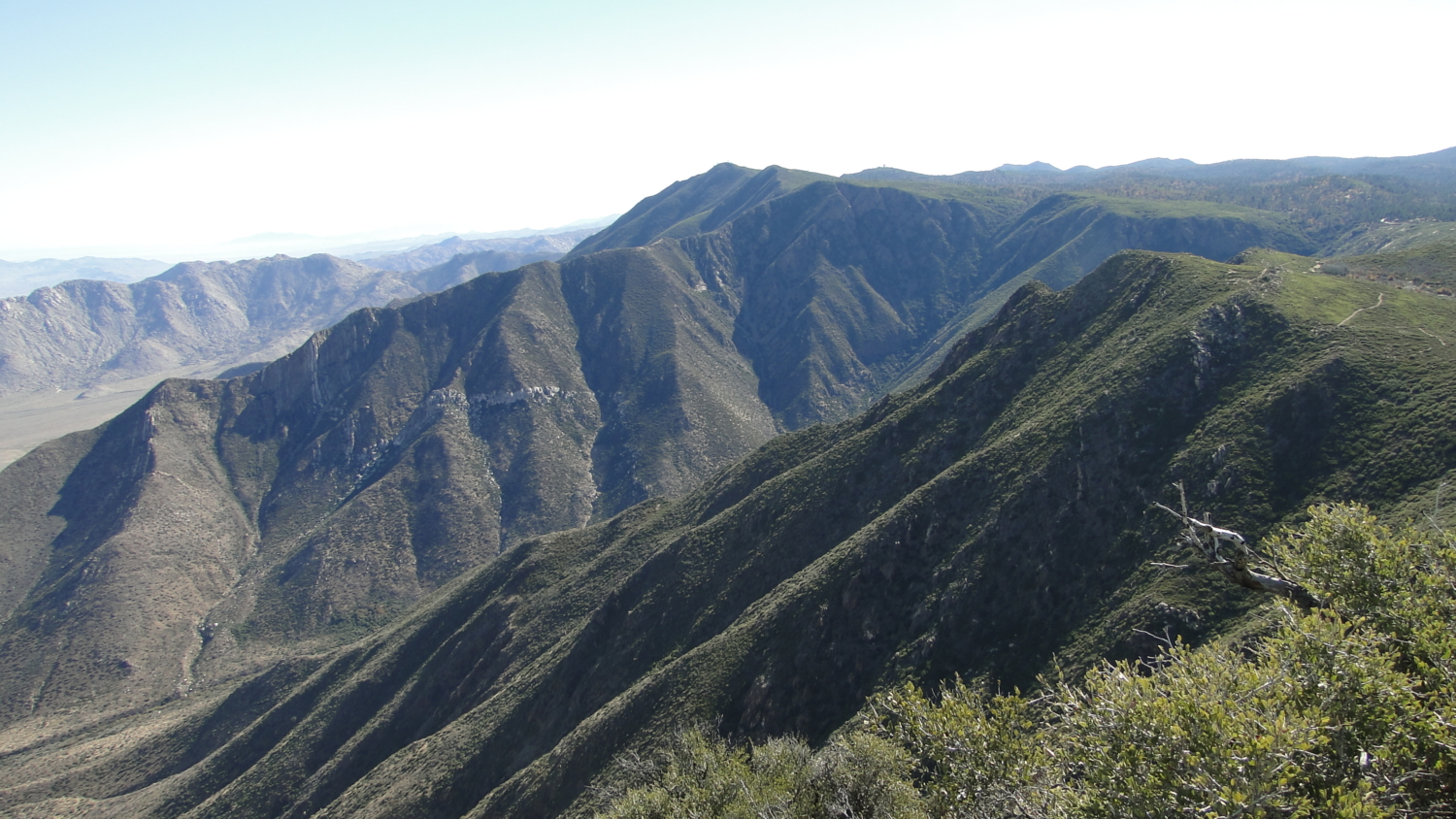 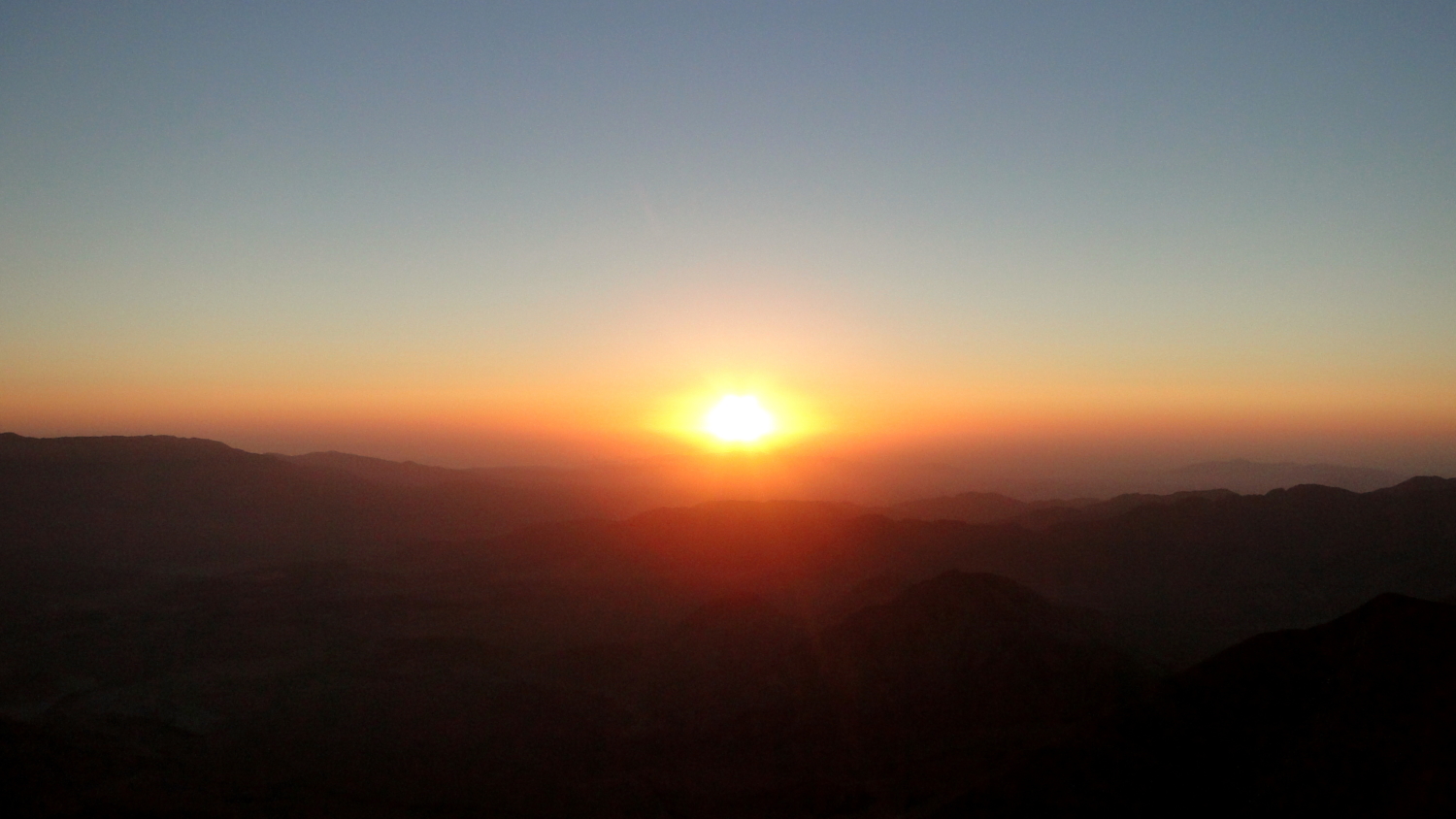 The single track trail is somewhat rocky but generally easy to follow. This includes a brief stretch of the PCT and an informal trail to the summit. There is a small patch of poodle dog bush near the summit that's fairly easy to avoid.

From San Diego, take Interestate 8 east toward El Centro and exit at Sunrise Highway. Turn left from the off-ramp and drive 14.2 miles north on Sunrise Highway to a pullout on the right side of the road. Several parking spots indicate the starting point for the Garnet Peak Trailhead.