Anza-Borrego Desert State Park’s high point, Combs Peak, stands atop the colorfully named massif known as Bucksnort Mountain southwest of Coyote Canyon on the northwest end of the park. Cloaked in chaparral and Coulter pine saplings, Combs Peak stands in contrast to typical desert peaks with their nearly naked arrangements of boulders, cacti, and occasional shrubs. Views from the 6,193’ summit survey a magnificent panorama of the entirety of the Santa Rosa Mountains to the north and the Palomar Mountains and San Jose del Valle to the south. 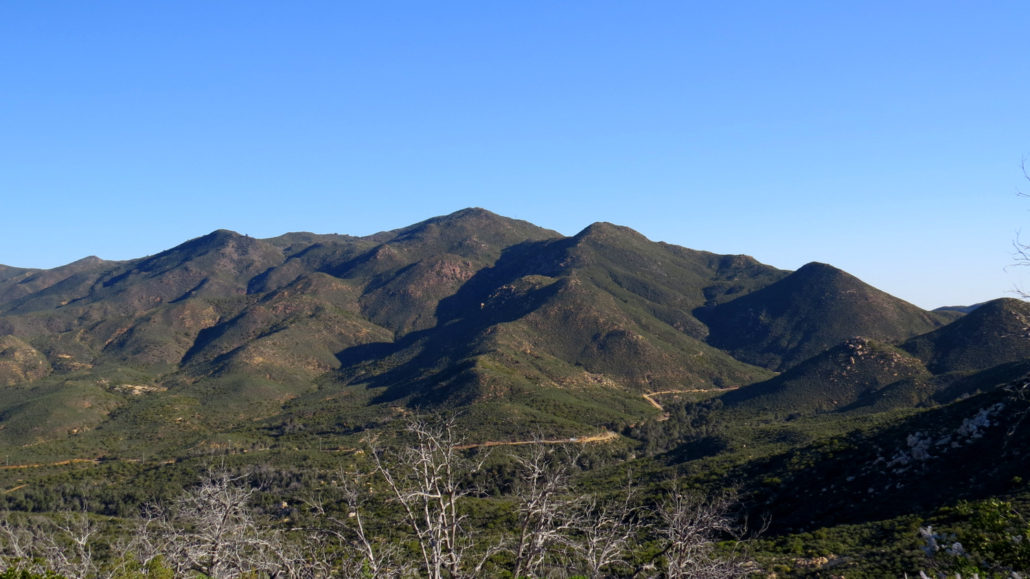 To reach Combs Peak, find the Pacific Crest Trail junction leading north from Chihuahua Valley Road. In typical PCT fashion, the narrow tread winds in and out of and around ravines in order to maintain a moderate uphill grade in a generally northerly direction. The landscape here has suffered through a succession of fires over the years, and as time goes by the chaparral will recover along with sporadic patches of Coulter pines. Coulter pines thrive in drier environments at the middle elevations, and although most of the old-growth trees burnt up in the fires, Coulter pines will again stand up like whiskers after a bad shave in the coming decades, pending any future fires. 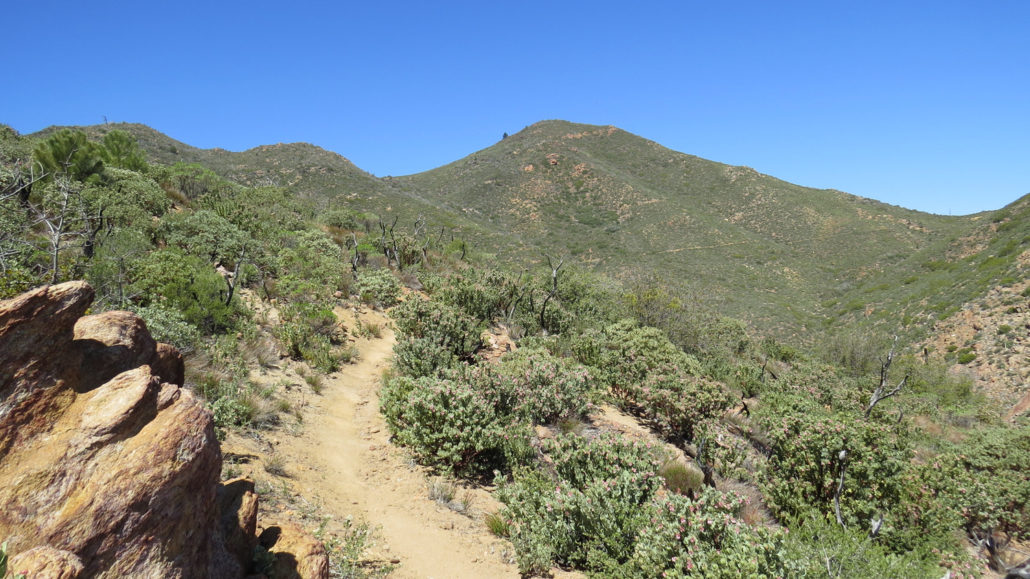 At 1.9 miles, the PCT tops out on a ridge on the eastern shoulder of Combs Peak. Several campsites lies to the west of the trail, and this dry camp has become a popular overnight spot for PCT hikers and local backpackers. Since this is Anza-Borrego Desert State Park, no permits are required to camp here. Most places in Anza-Borrego permit campfires, provided you bring a metal container to hold the fire. However, having a fire in the chaparral belt would be an extremely risky and foolish venture as one spark could end up incinerating thousands of acres. The views across Coyote Canyon toward Toro Peak and the Santa Rosa Mountains are inspiring, but not as impressive as the summit views that await. 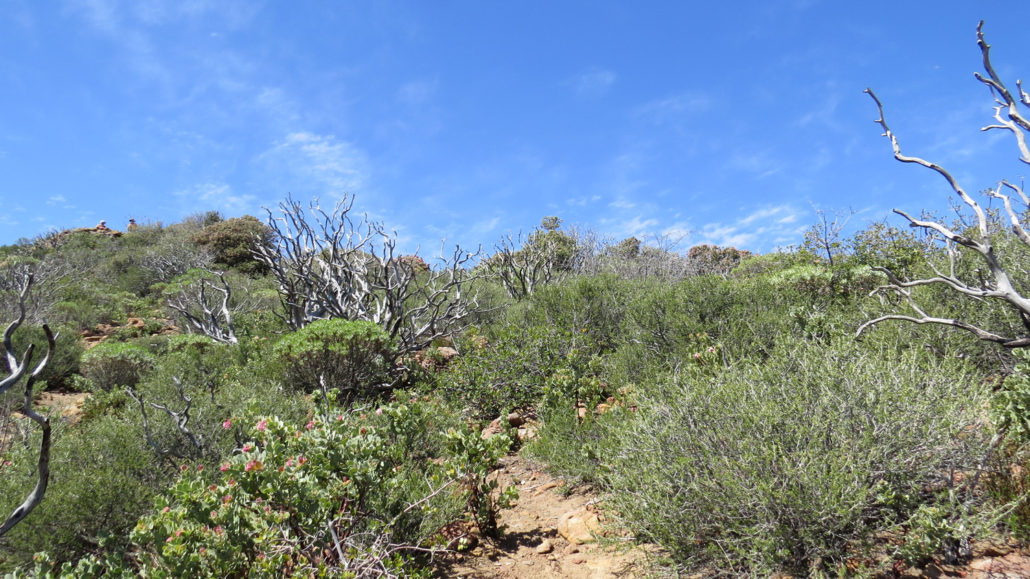 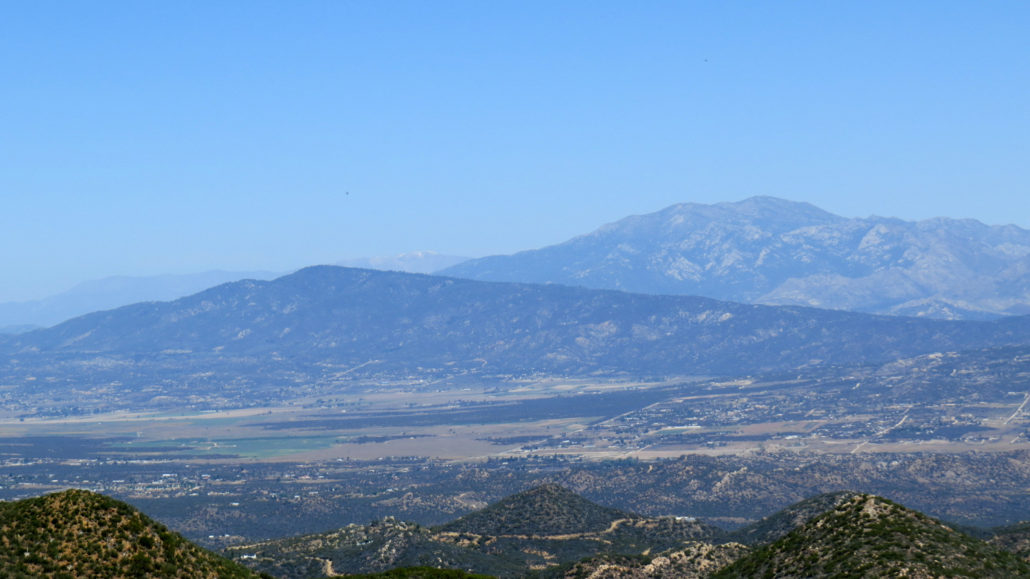 From the campsites, turn west to find an informal path through thick chaparral up to the summit of Combs Peak. This steep path quickly gains 600’ of elevation in a matter of .5 mile. Several rocky, slippery spots make the going a bit of a challenge, but if you are patient and careful, you won’t have a serious challenge reaching the summit. 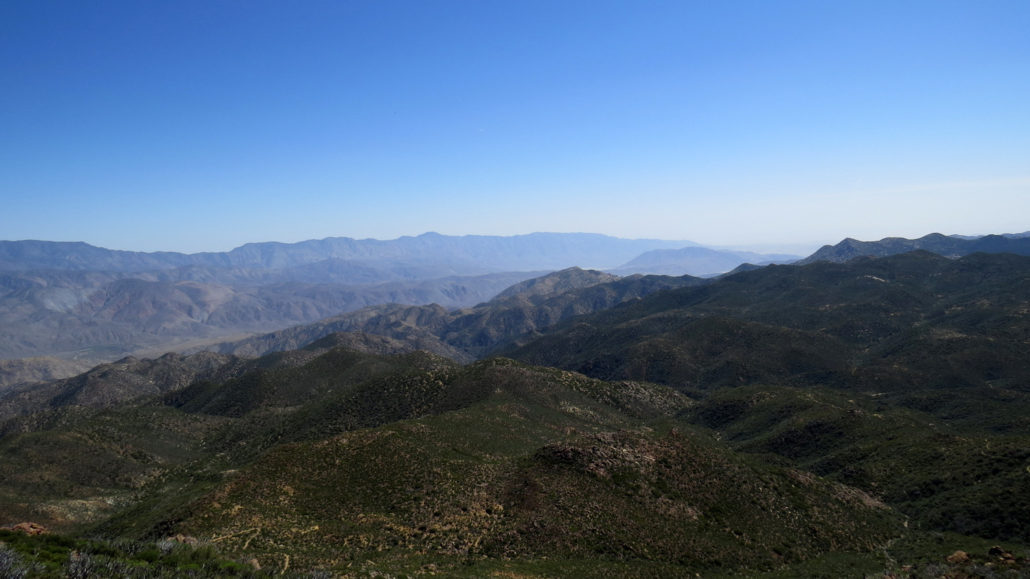 Once atop the summit, you can rest up and enjoy the views that have been developing for the extent of the climb. Most obvious and impressive, the rugged heights of the Santa Rosa Mountains rise up from the desert floor along Villager Ridge to Rabbit Peak and Dawns Peak before culminating at the forested heights of Toro Peak. An elevation difference of of nearly 7,000 feet separates the summit of Toro Peak from the lowest parts of Collins Valley below in Coyote Canyon. 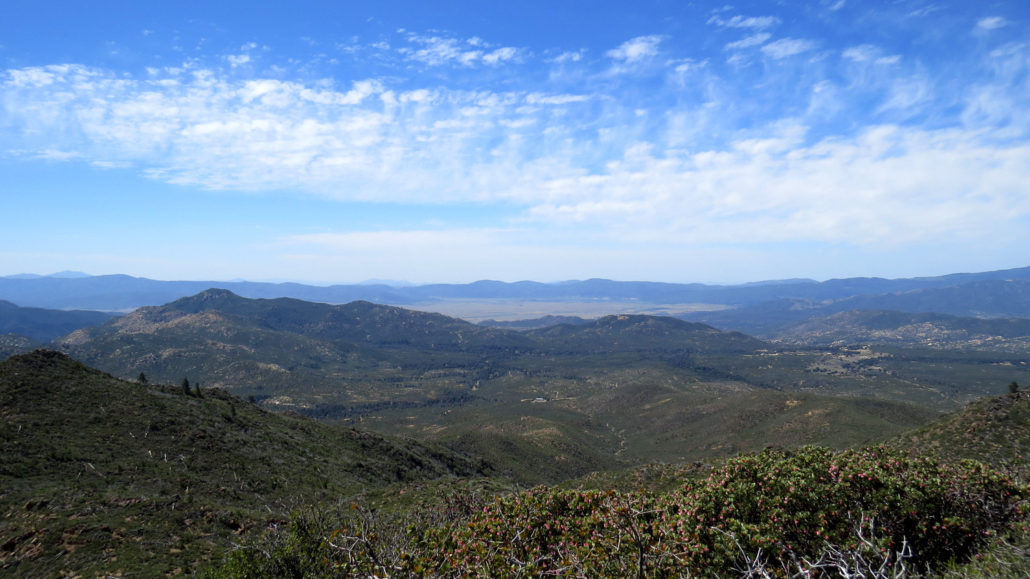 Swing around to look toward the south, and you’ll see the long, rolling ridge of the Palomar Mountains culminating in a rival high point dubbed, appropriately, High Point. Eagle-eyed viewers might be able to spot the steel fire lookout tower atop this peak. Scanning left/south, your eyes will pass over the wide, gentle pastures of San Jose del Valle with Lake Henshaw shimmering at the base of Mesa Grande. Keep scanning south and west to take in the northern edge of the Volcan Mountains before passing over Montezuma Valley toward the broad flank of Hot Springs Mountain, San Diego County’s highest point. 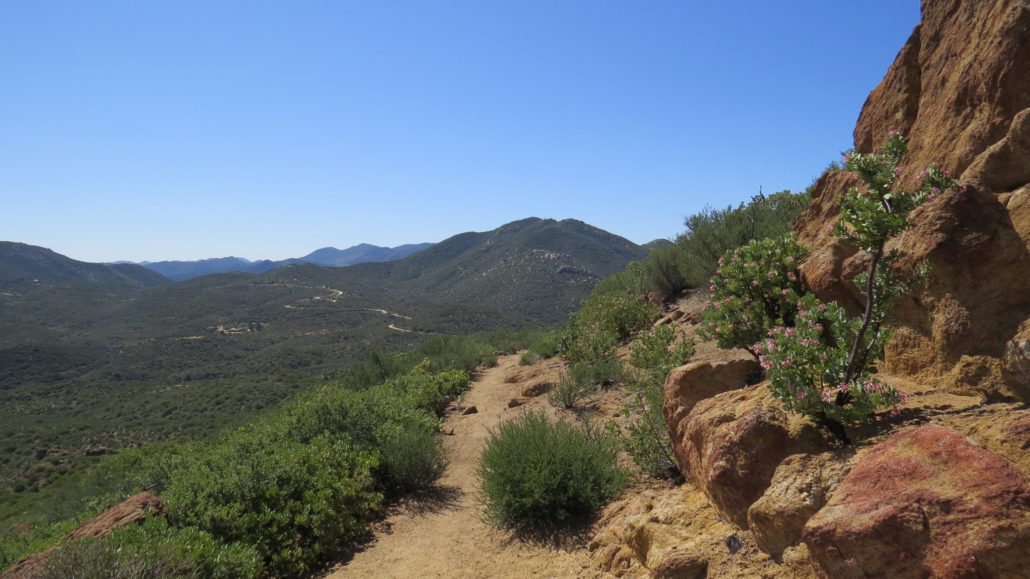 When your brain has reached saturation point from so much wind-swept epicness, retrace your steps carefully downhill to the campsites. Jump back on the PCT heading south to reach your car after 1.9 miles. 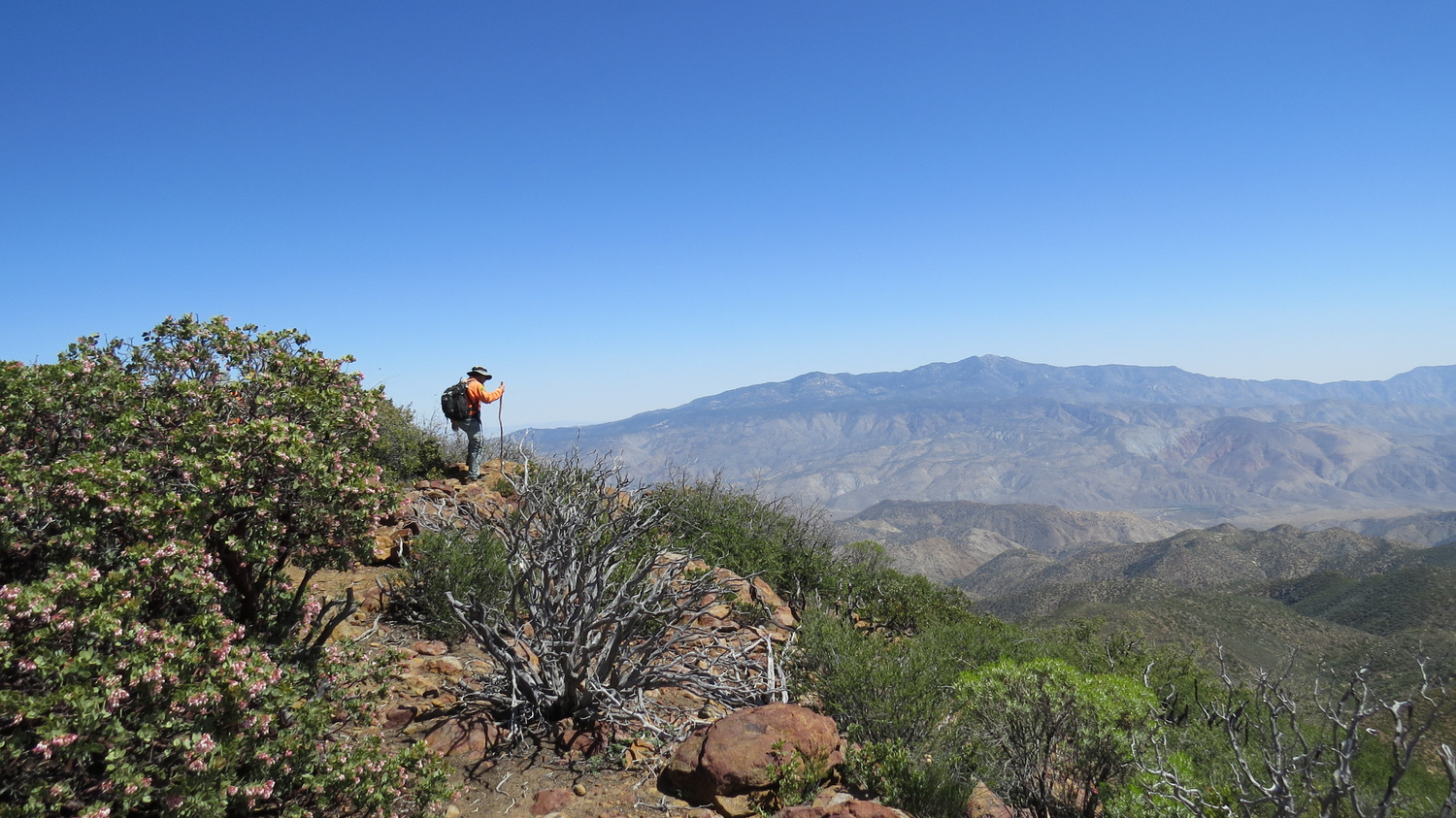 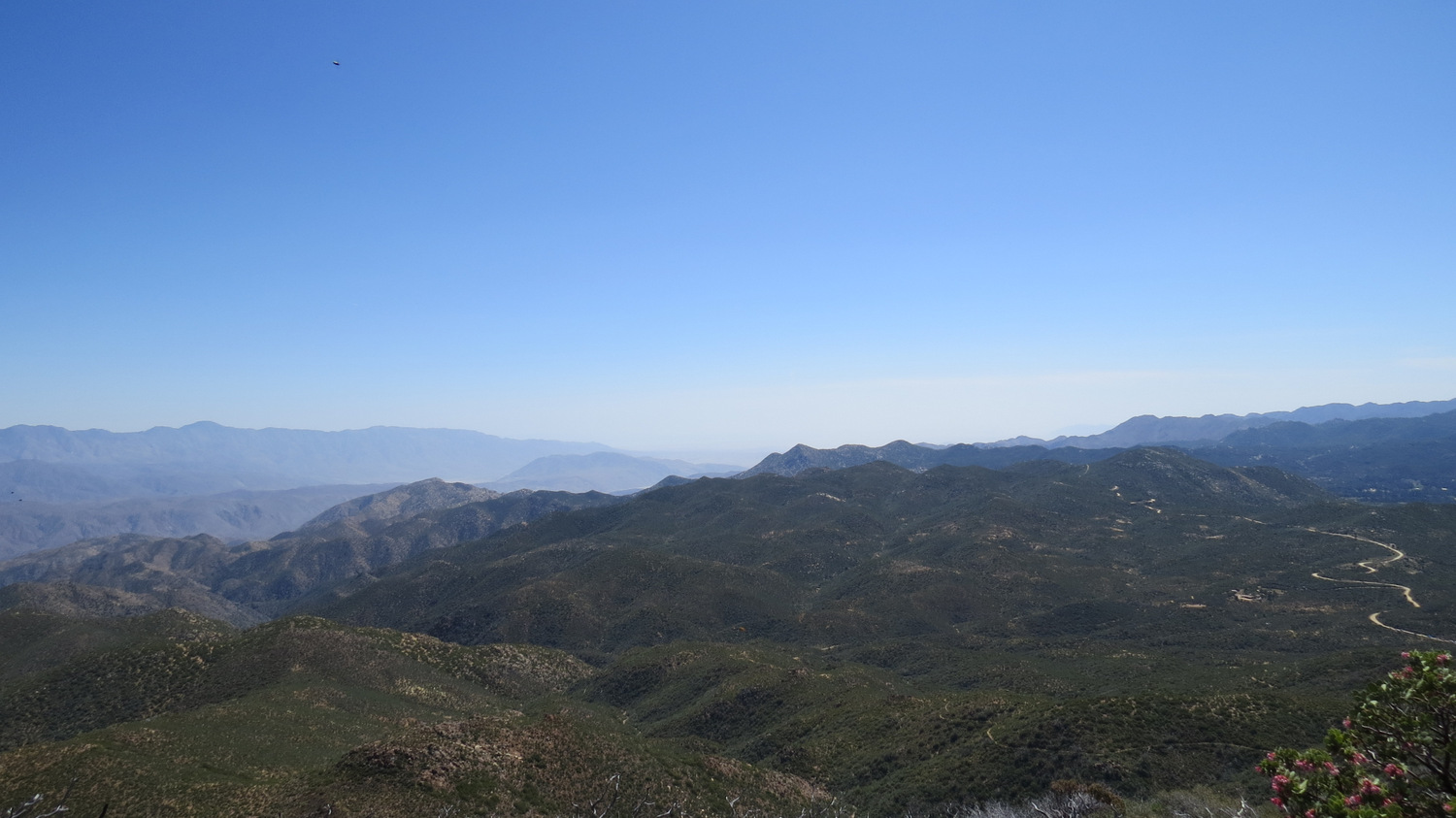 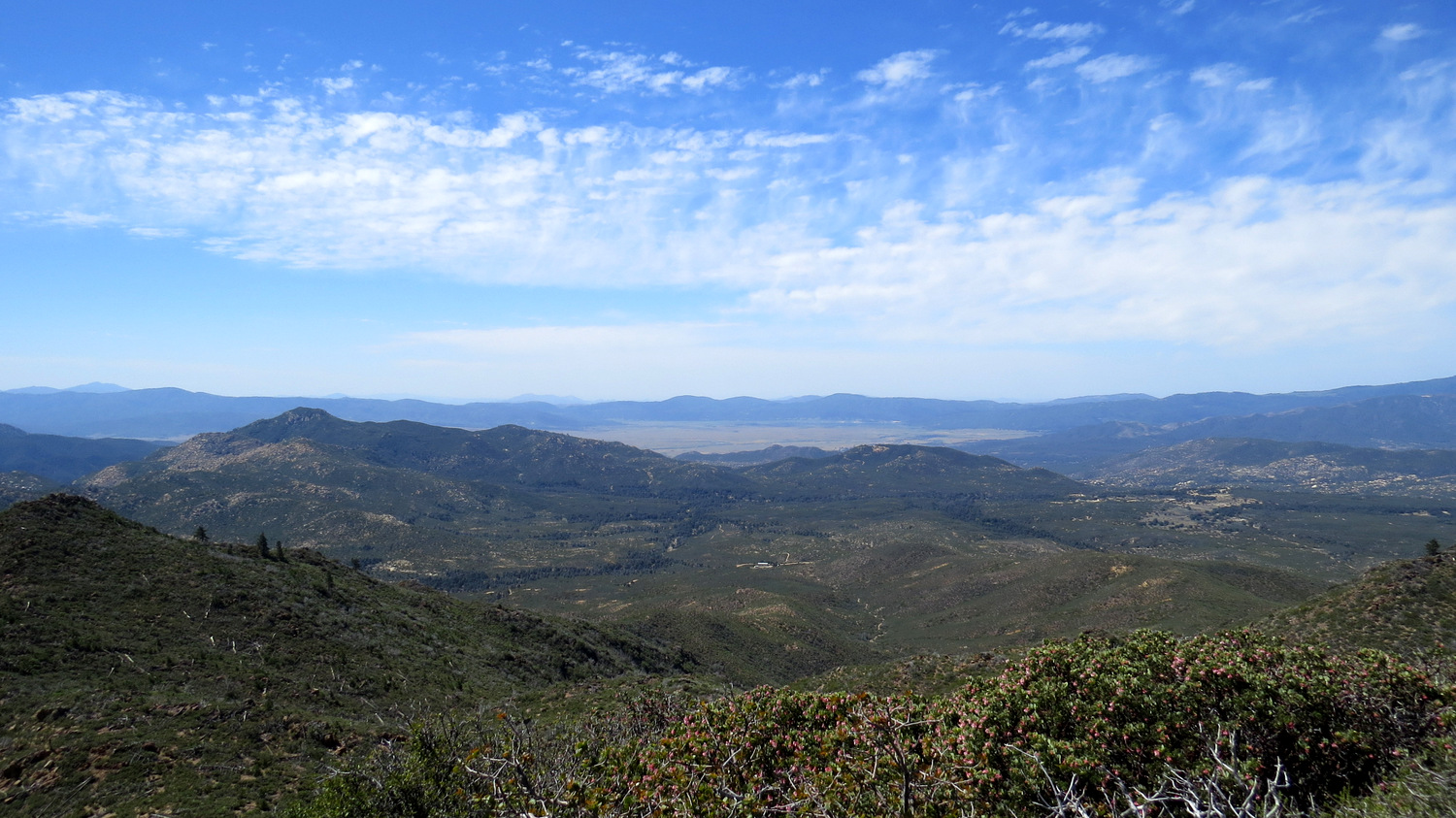 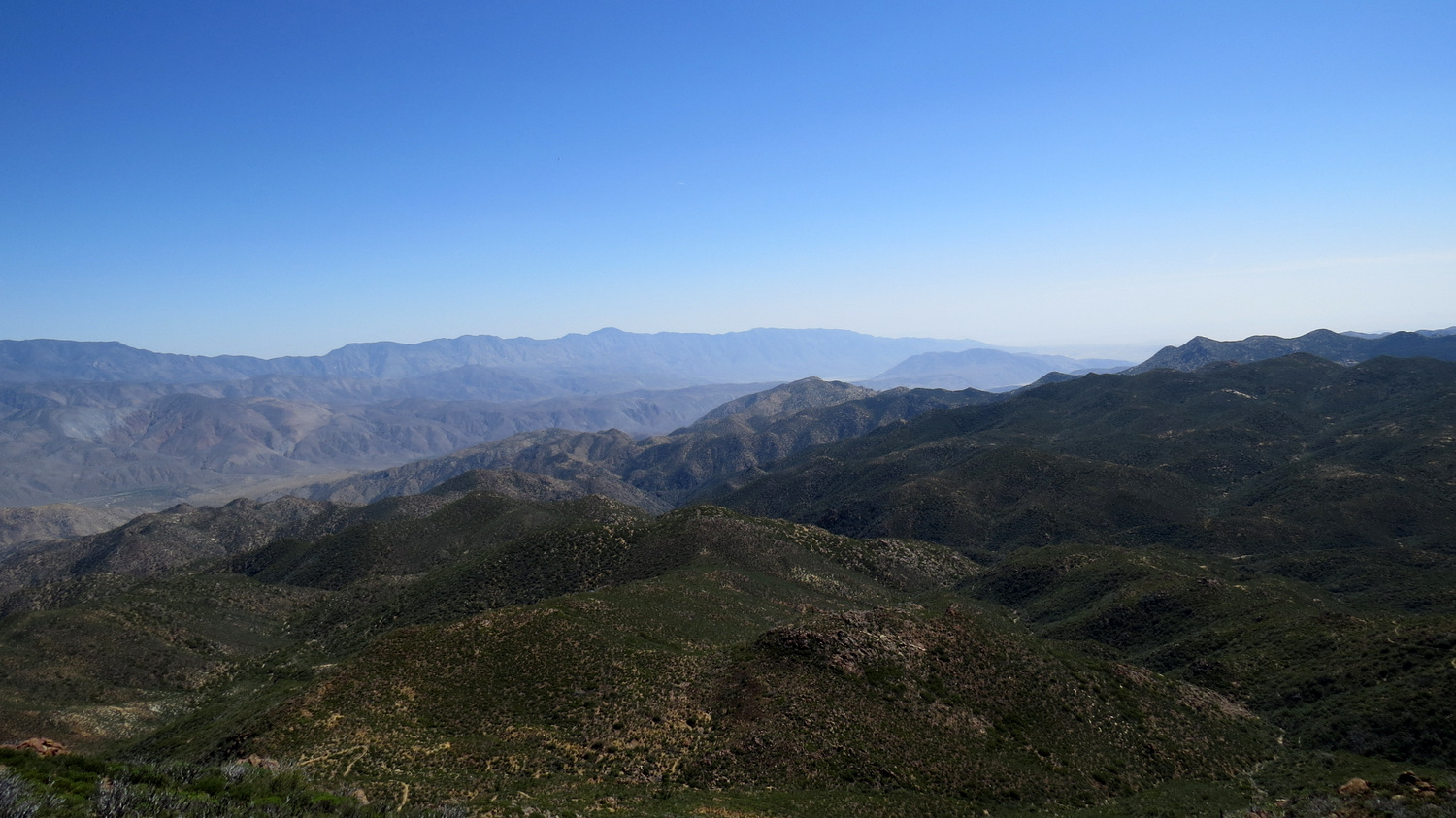 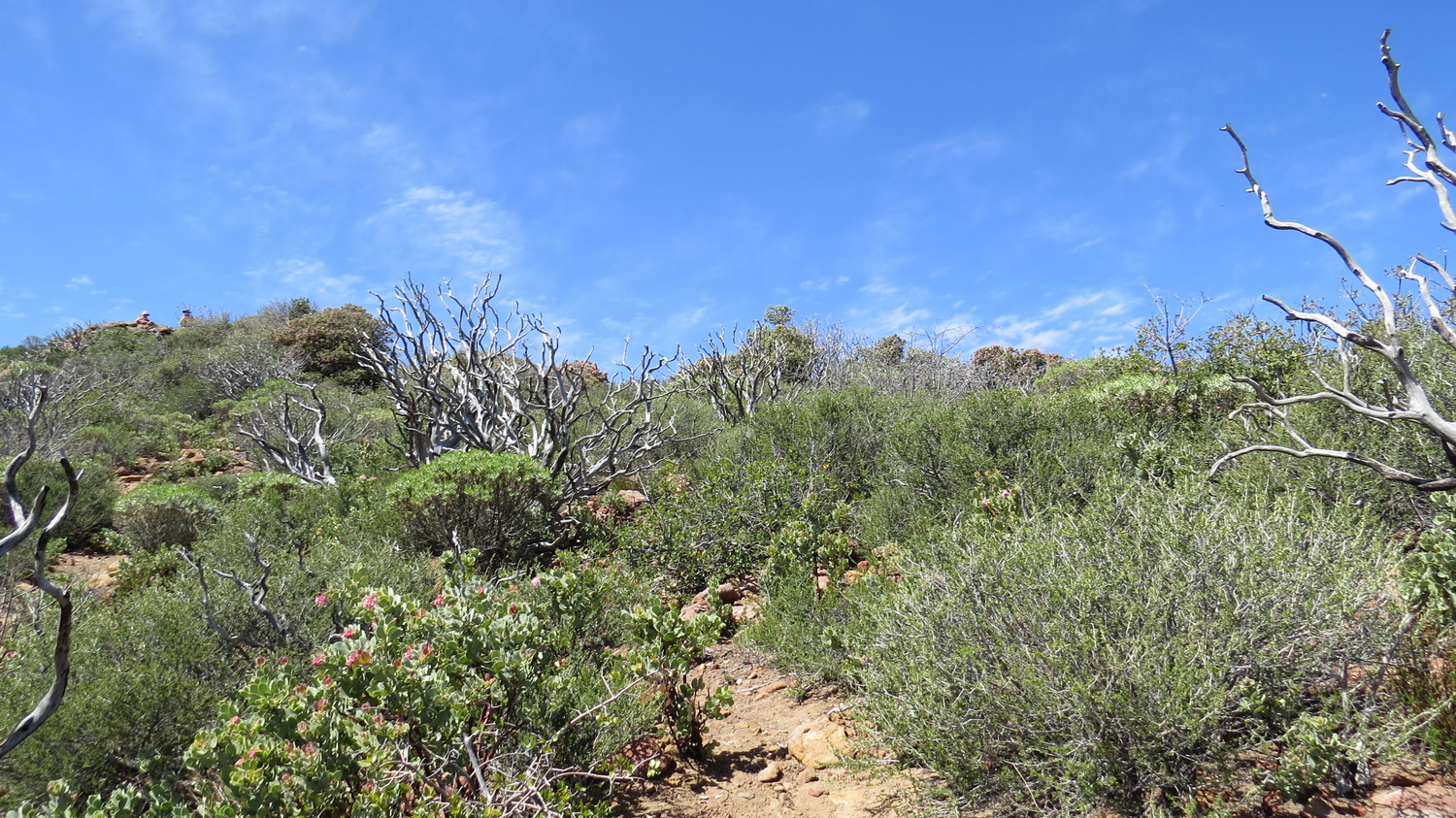 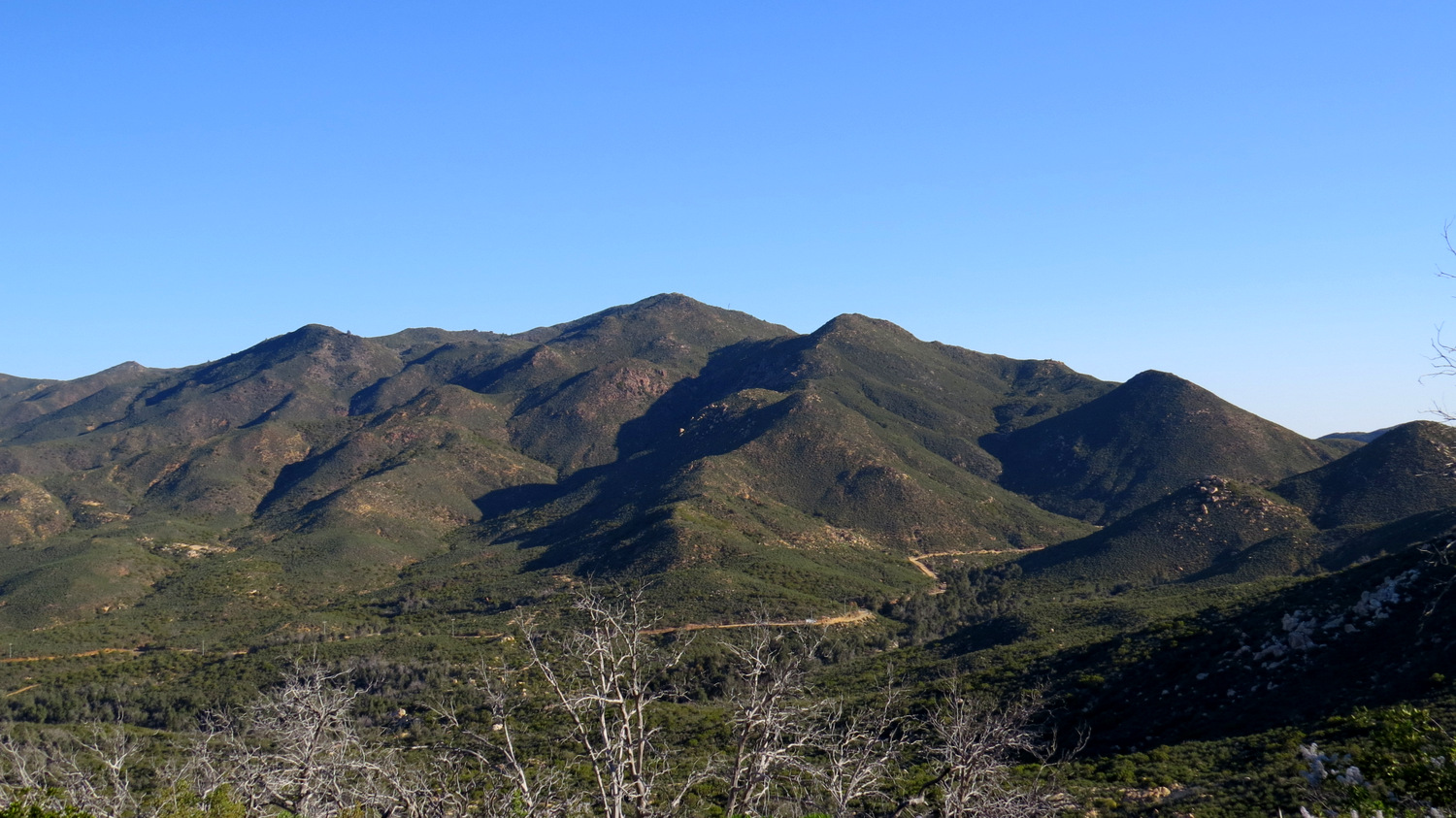 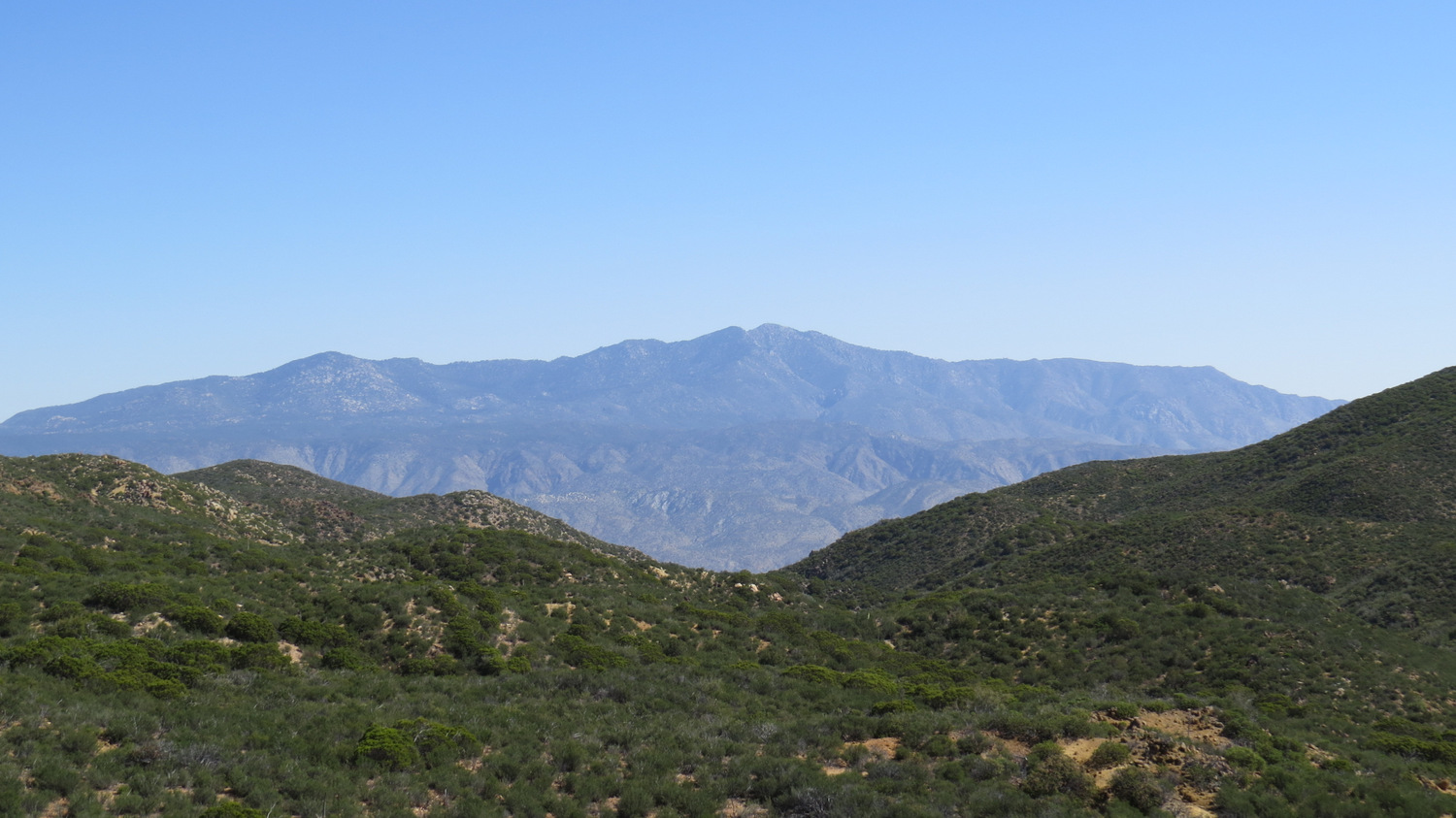 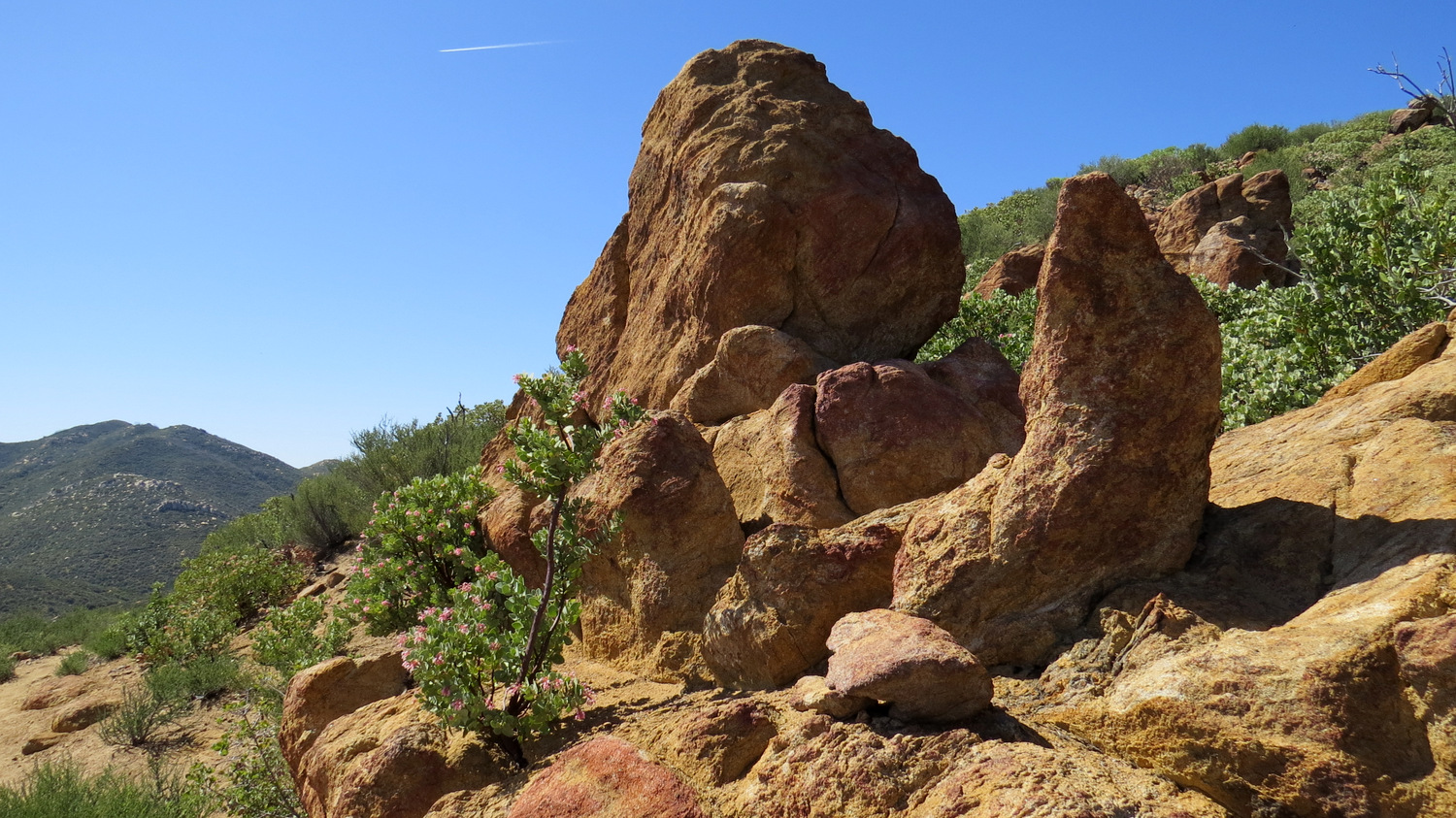 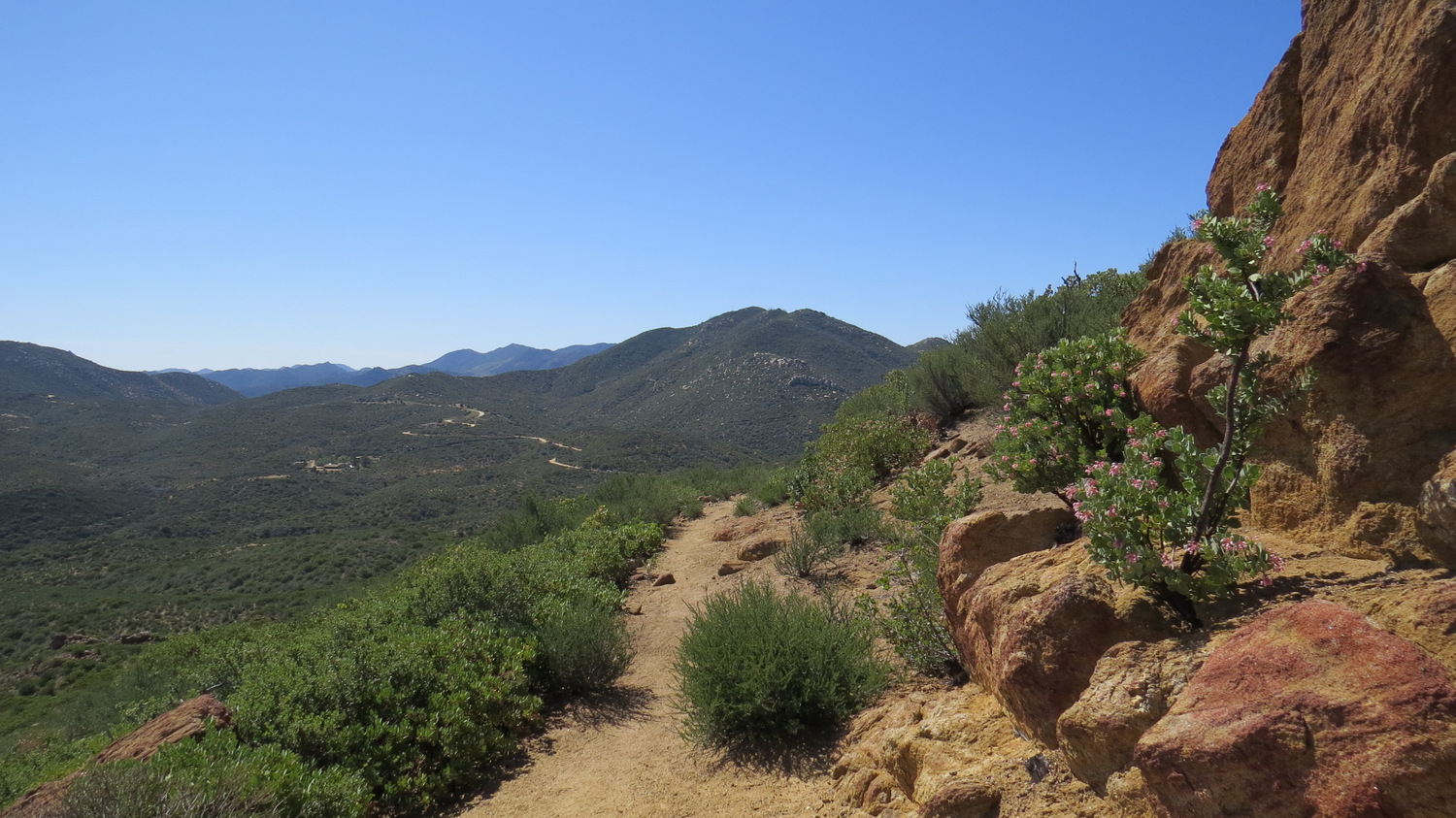 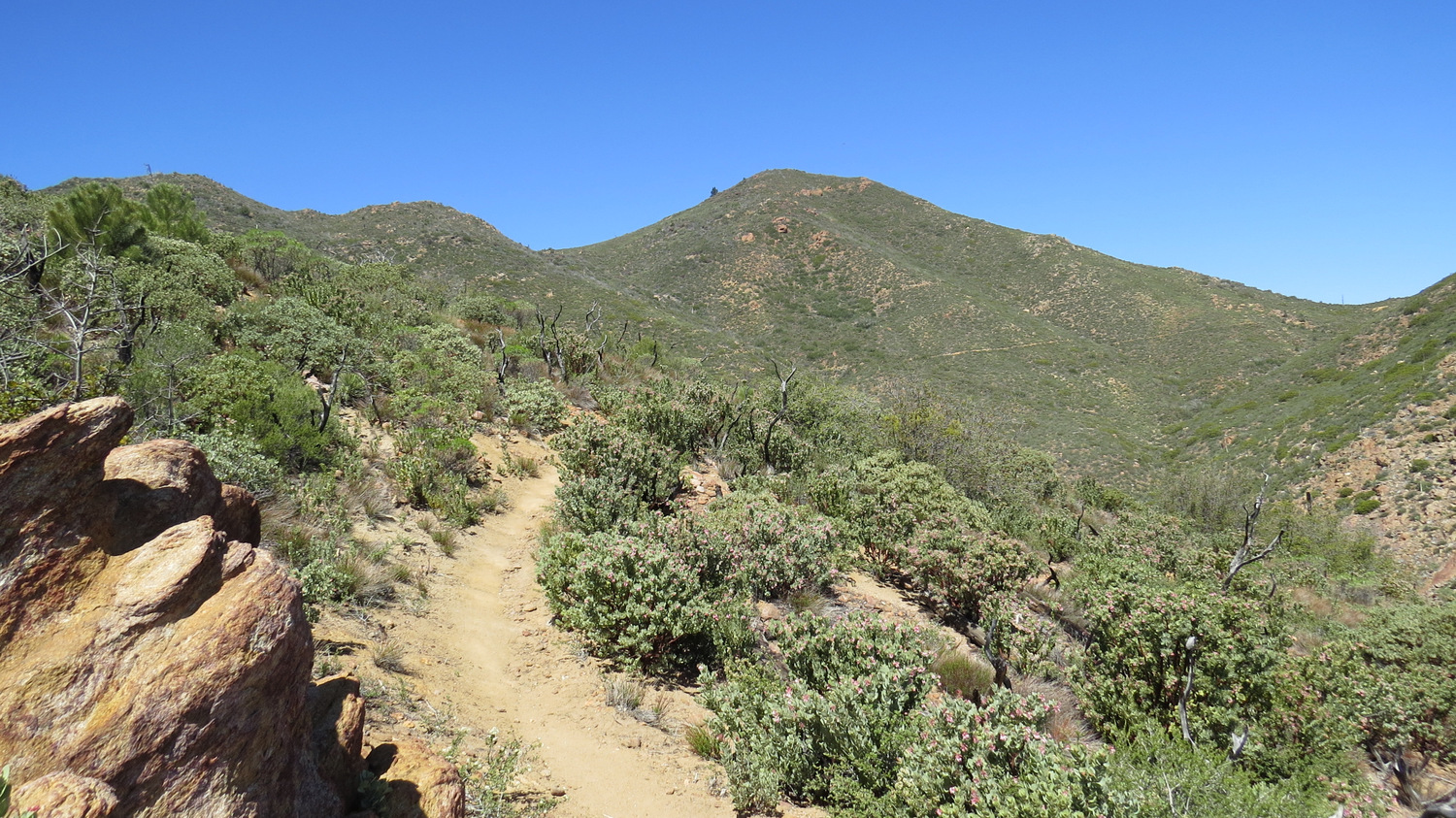 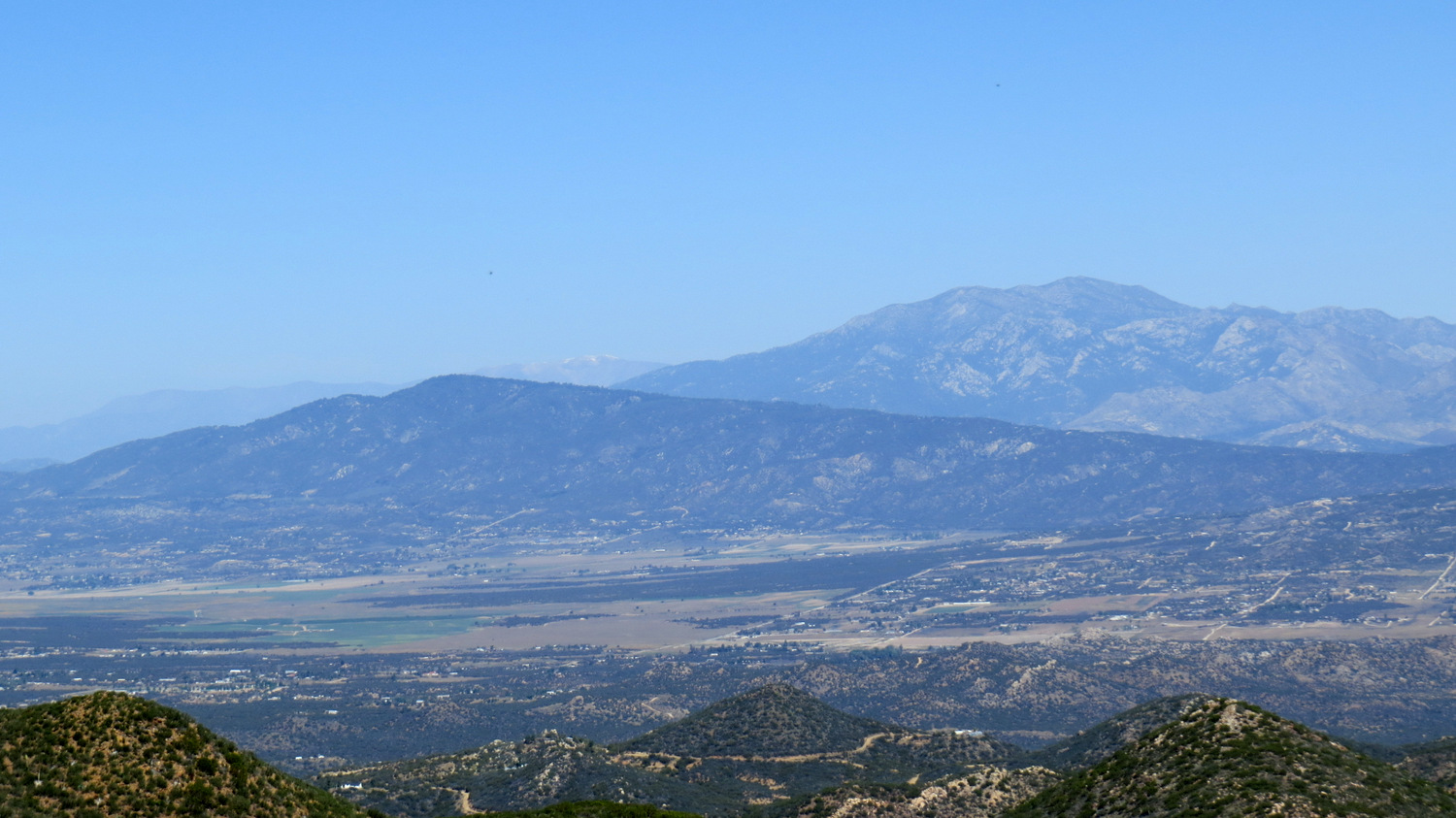 As with all sections of the PCT, the trail is moderately graded and well-maintained. The informal path leading to the peak is another story; it is steep, rock, and brushy.

Backpackers can camp in Anza-Borrego Desert State Park without reservations or permits, provided they aren’t trampling vegetation or having ground fires. Usually, the park asks campers to keep their fires contained in a metal container, but this this route lies within the chaparral, fires would be an extremely dangerous idea. For car camping, the nearest campground would be Cleveland National Forest’s Indian Flats Campground.