It seems like every region is required to have at least one Black Mountain. This moniker occurs any time a mountain is a little darker than surrounding peaks, whether due to geology or vegetation. Given San Diego’s massive land area, it should come as no surprise that we are blessed with not one, but TWO Black Mountains. How we got to be so lucky is anybody’s guess. 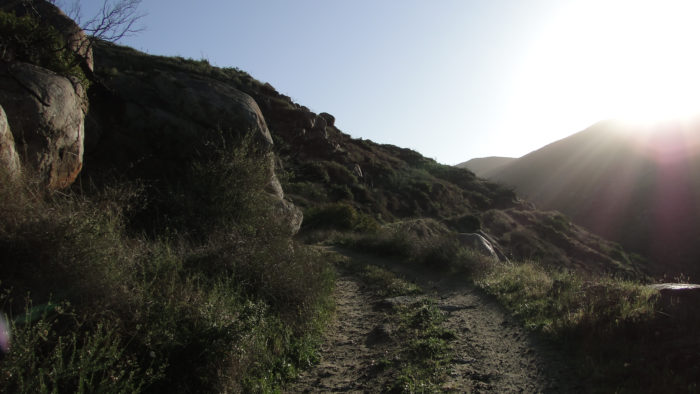 This Black Mountain north of Ramona in the Palomar District of Cleveland National Forest is not to be confused with the Black Mountain in Rancho Penasquitos. That mountain, which is cloaked in thickets of black sage (hence the moniker), is a smaller, easier, and far more accessible route traveled every day by hundreds of hikers and mountain bikers. The “Big” Black Mountain in Ramona is seldom-traveled, much taller (4,000+ feet), and has a much more challenging approach. As they say, one of these things is not like the other. 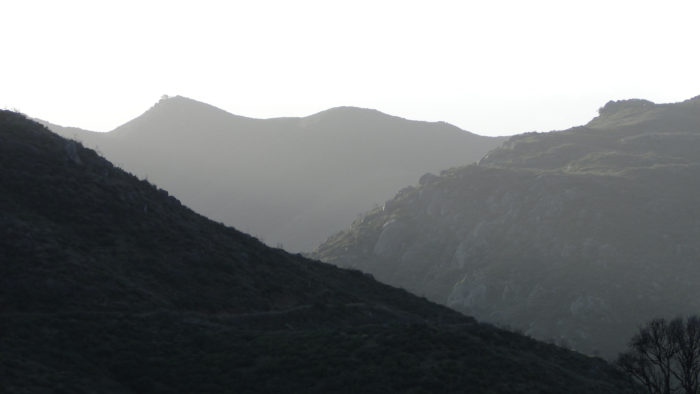 Note that off-road vehicle traffic occasionally passes along the road to the summit. It’s possible that you may encounter a 4WD vehicle at any point on the hike. It’s also possible that you could drive a high-clearance or 4WD vehicle up to the top, but then you’d miss the opportunity to wage caloric genocide. 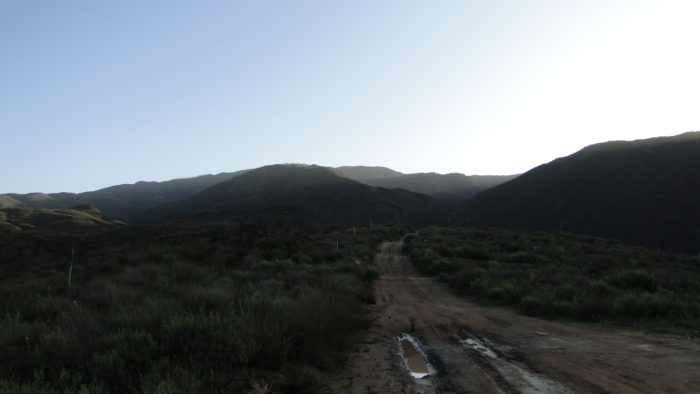 From the cattle guard at the beginning of Black Mountain Truck Trail, strike out due east along the wide path. The trail dips into a wooded ravine before bending to the right to continue climbing. 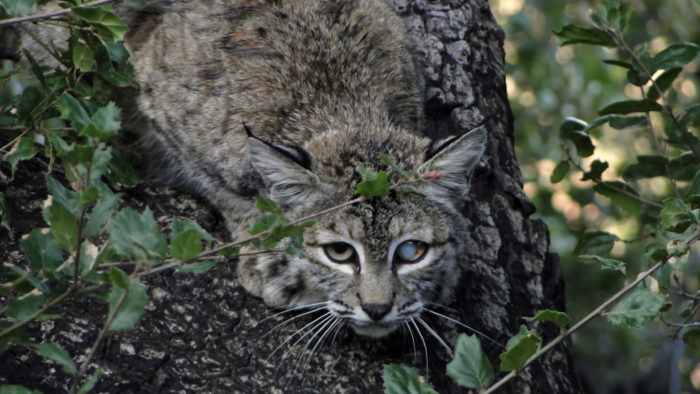 It was at this bend that I encountered a half-blind bobcat perched in a coast live oak tree. I stopped for a moment, looked up, and saw the cat looking at me a mere 15 feet away. We were both too startled to move, and I eventually moved on without incident, leaving the cat in peace. I bring this up not just because bobcats are awesome (Spoiler alert: They are WAY AWESOME!), but because you have a good chance of wildlife encounters in this remote part of the county. 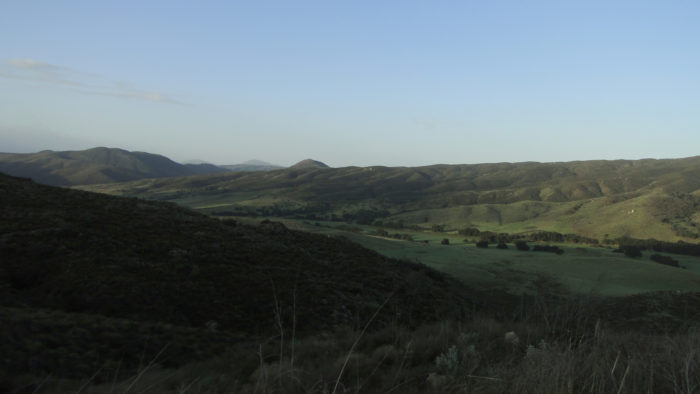 The trail takes a wide switchback to the north and junctions with Santa Ysabel Truck Trail at 1.4 miles. A wide, flat-ish field next to the road on the right might serve as a good campsite, although other opportunities emerge further along the route. Continue past the junction to begin climbing in earnest. 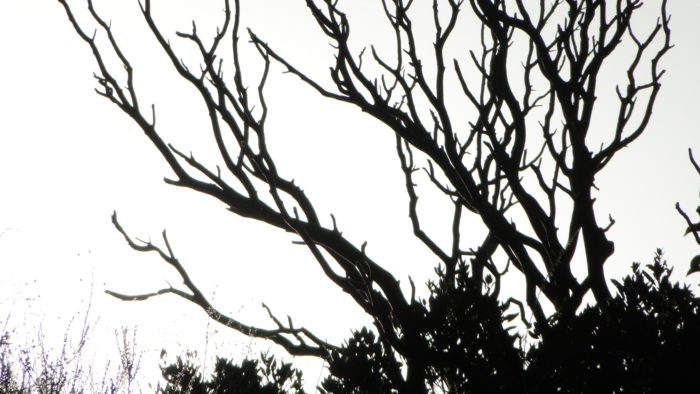 As you climb, you’ll notice many coast live oaks in varying stages of recovery from the 2007 Witch Fire, which erupted during October near Santa Ysabel and devoured 197,000+ acres over the course of a few weeks. The fire swept the mountain’s slopes, leaving devastation in its wake. Coast live oaks are resilient in the face of fire, and while some trees are dead or dying, many trees survived the inferno and are now deep into their recovery. 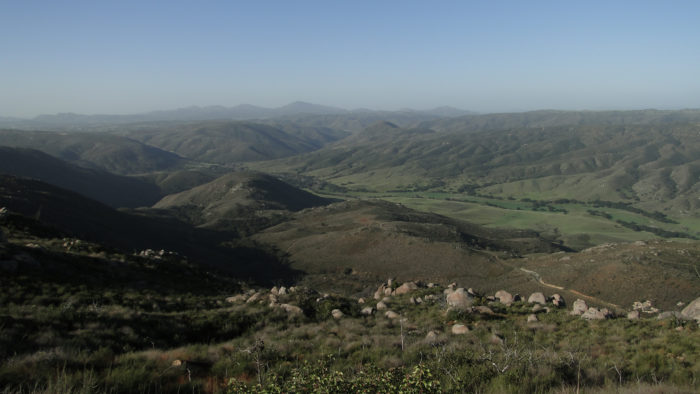 With no junctions until 6.1 miles and a steady climb ahead, you’ll settle into a groove while the views down Pamo Valley and out over Ramona and Poway improve with every step. You’ll pass a spring at 5.4 miles; don’t rely on this as a water source if you’re backpacking thanks to the 5 crippling years of drought. 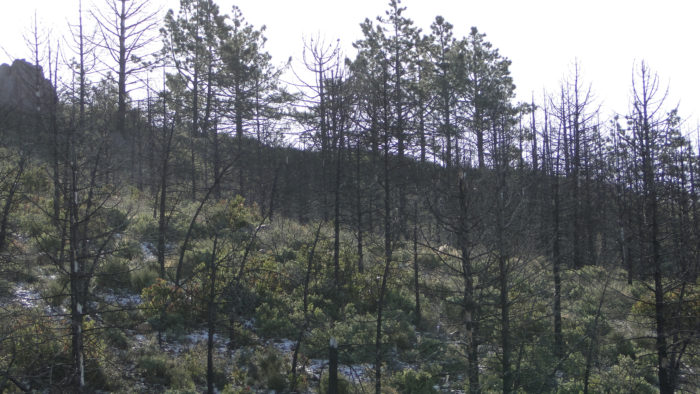 As you approach the summit, you will notice the skeletal remains of Coulter pines that bewhisker (that’s a word, right?) the highest elevations of the mountain. These pines were part of a Penny pine plantation created by the Forest Service, but most of them succumbed to the Witch Fire. A small grove survives near the top. 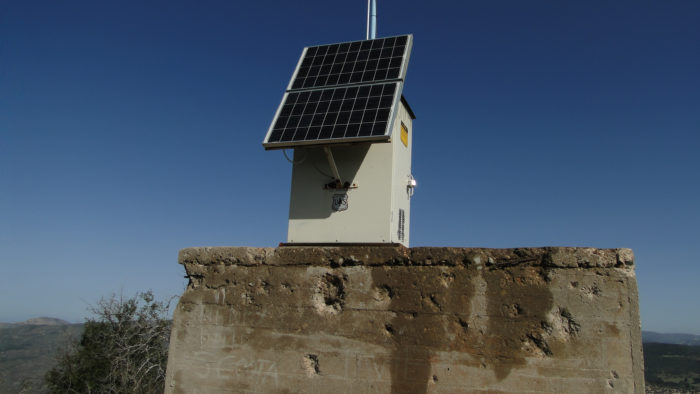 When you reach the end of the road, find the rough, overgrown informal path that takes you .1 mile north toward a concrete foundation at the mountain’s summit. A fire lookout once occupied this spot and allowed lookouts to survey the interior of the county from a unique vantage. 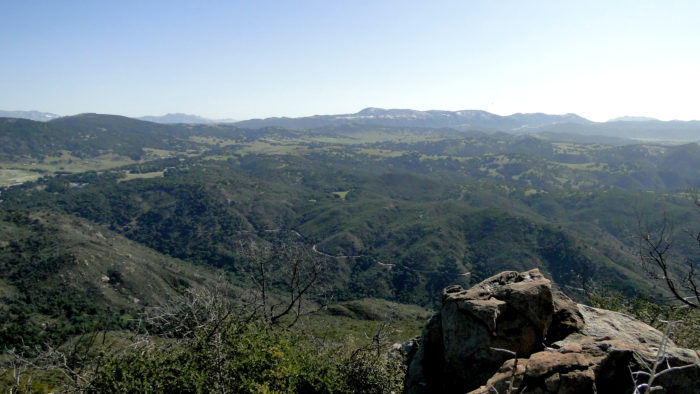 From the top, you’ll get impressive views ranging north, east, and south of the Peninsular Ranges, including the Palomar Mountains, Mesa Grande, the Volcan Mountains, the Cuyamaca Mountains, and isolated peaks in the south county including Viejas Mountain, El Cajon Mountain, Corte Madera Mountain, Lyons Peak, Lawson Peak, and Los Pinos Peak. During spring, the lush green expanse of Santa Ysabel Valley draws the eyes, while views to the coast emerge whenever marine layer is absent. 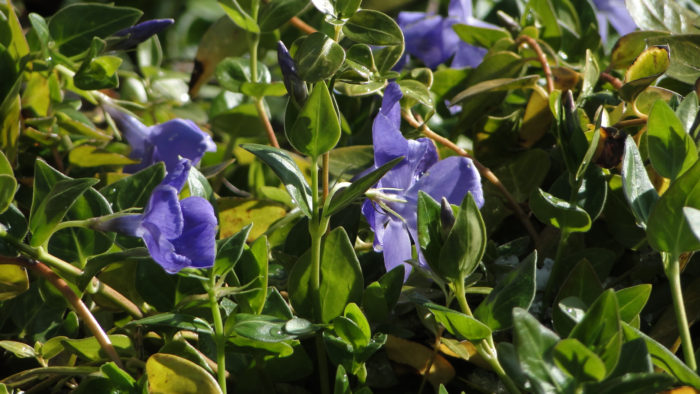 This is the end of the line, and a long descending return route that retraces your steps awaits. The concrete foundation is a fine spot therefore for a picnic lunch. As you relax at this fine viewpoint, take note of the copious growths of vinca, an introduced flowering vine better known as periwinkle. The vine’s flowers, colored periwinkle of course, brighten up the ground around the foundation. 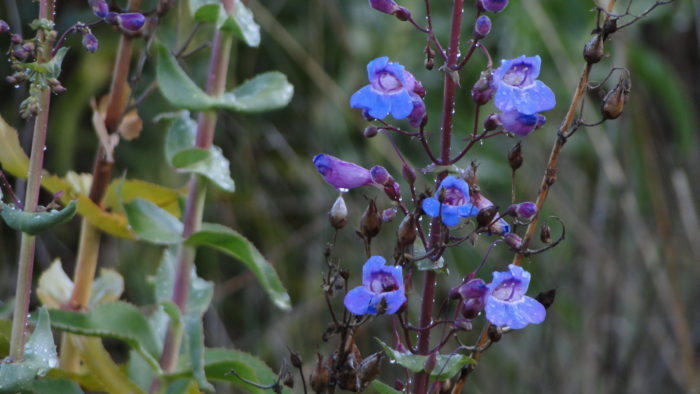 NOTE: Sadly, the Palomar District of Cleveland National Forest decided to reverse its decision not to require wilderness permits for dispersed camping as of 2/1/2016. In order to jump through this red tape hurdle, you will need to print out this application and fax it to the Palomar District office at (760) 788-6130. 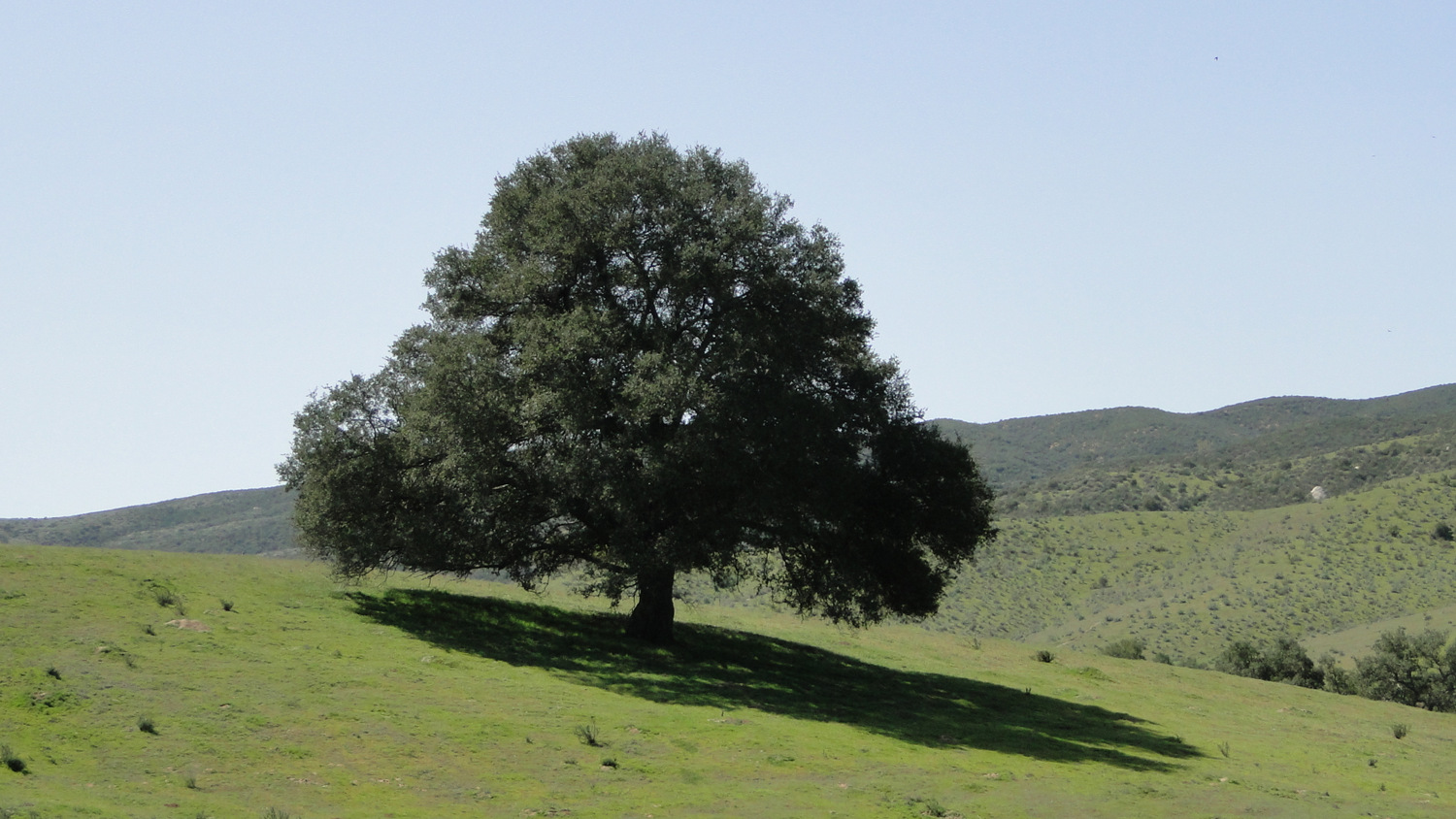 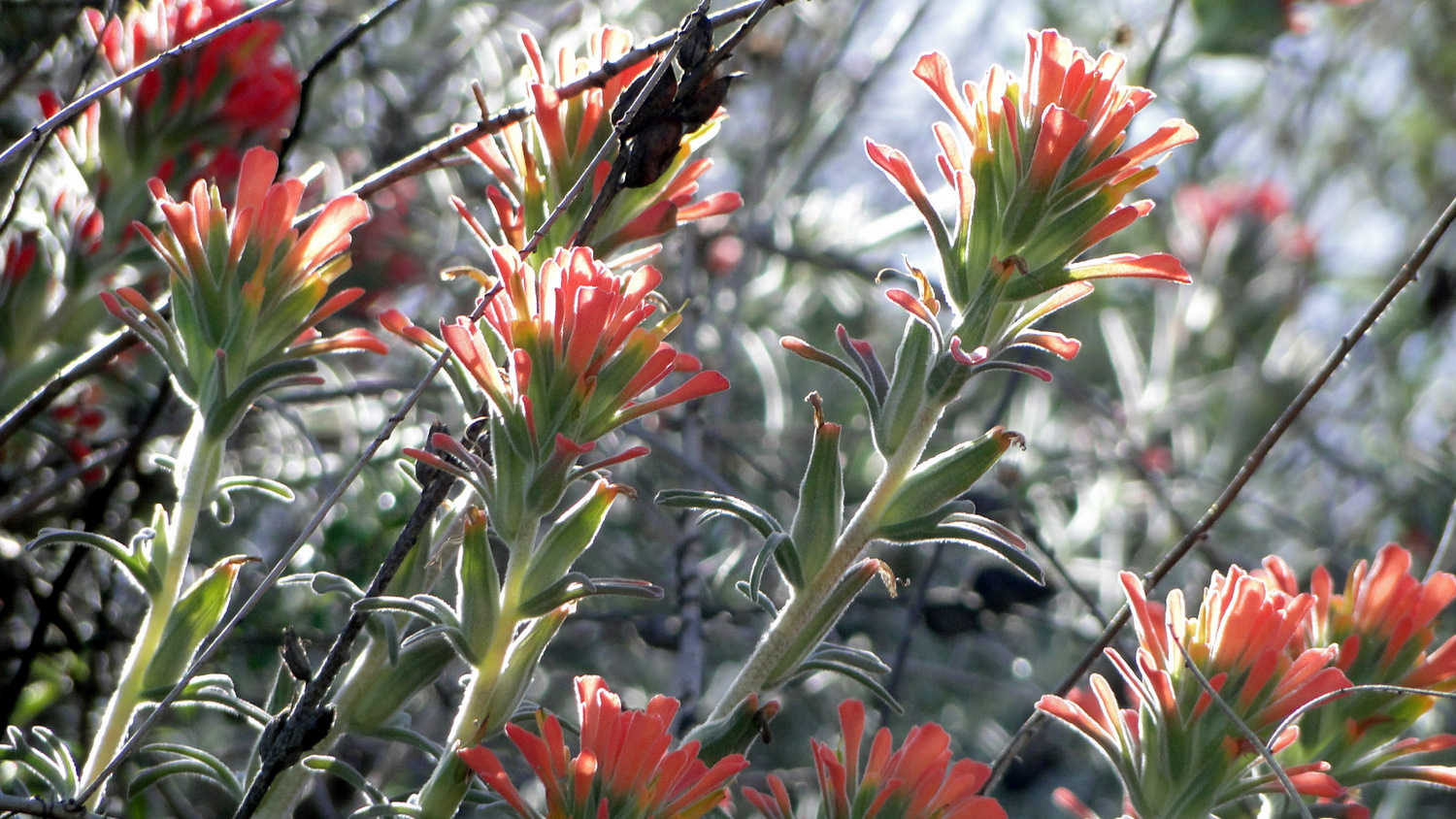 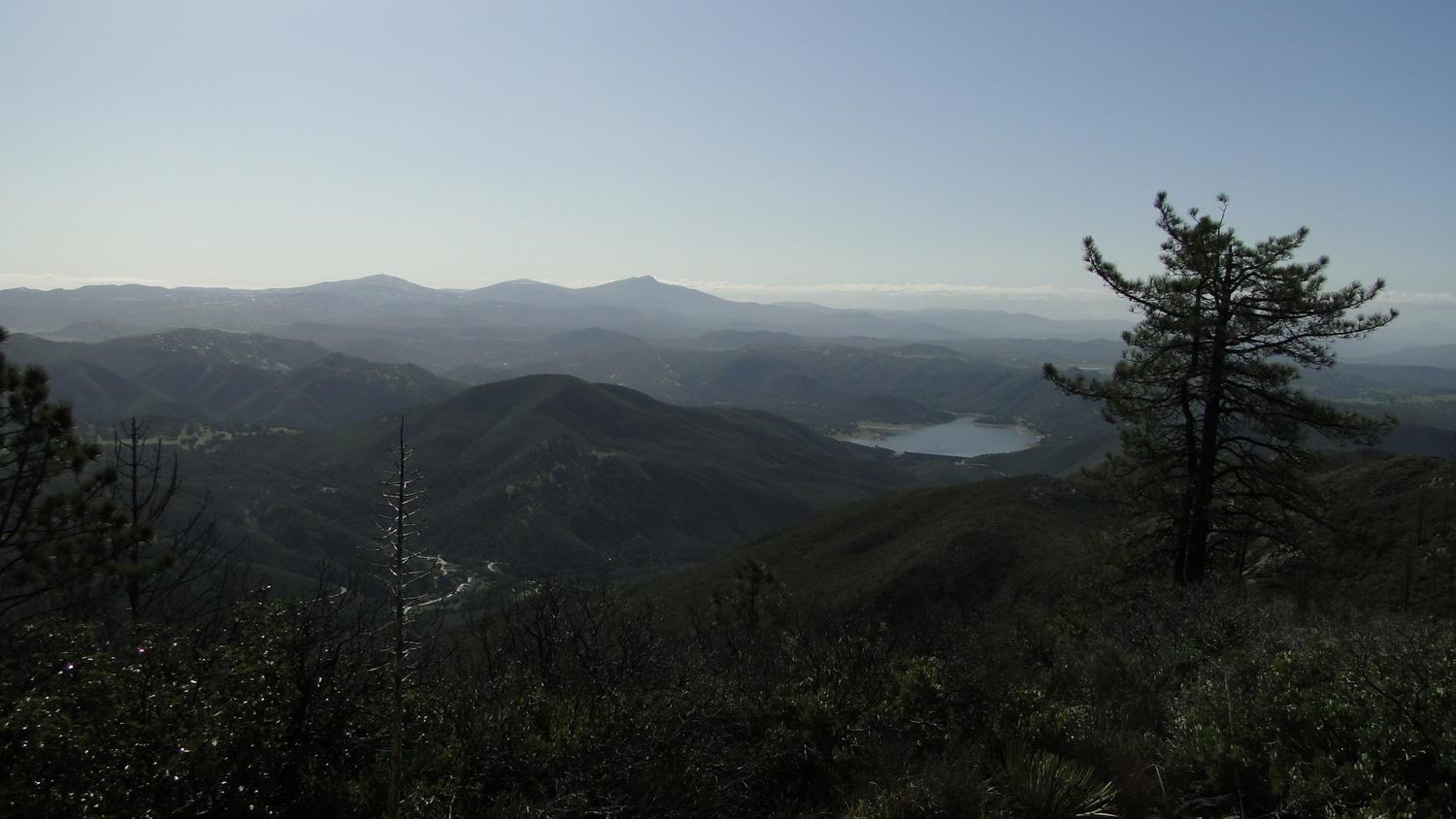 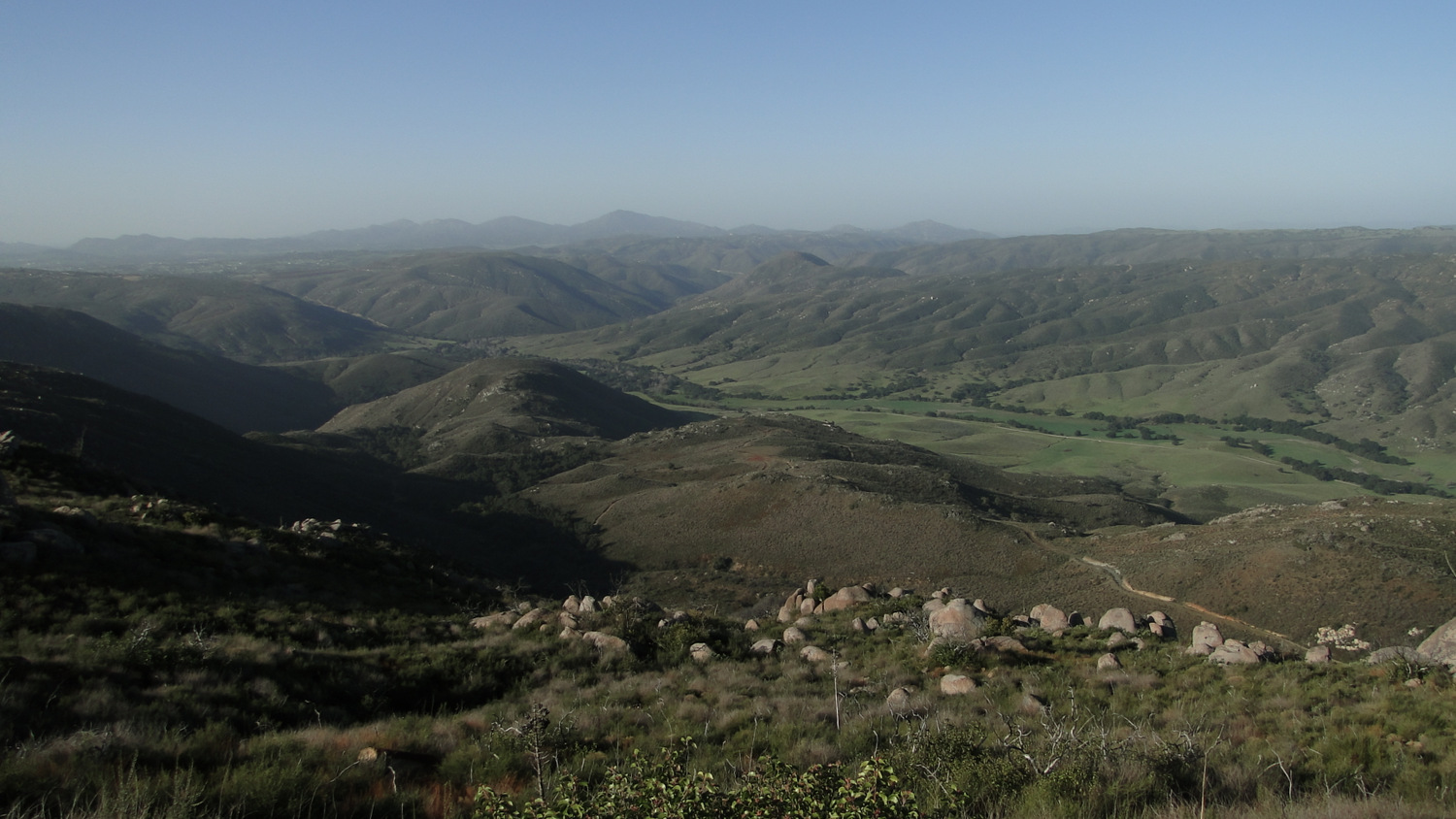 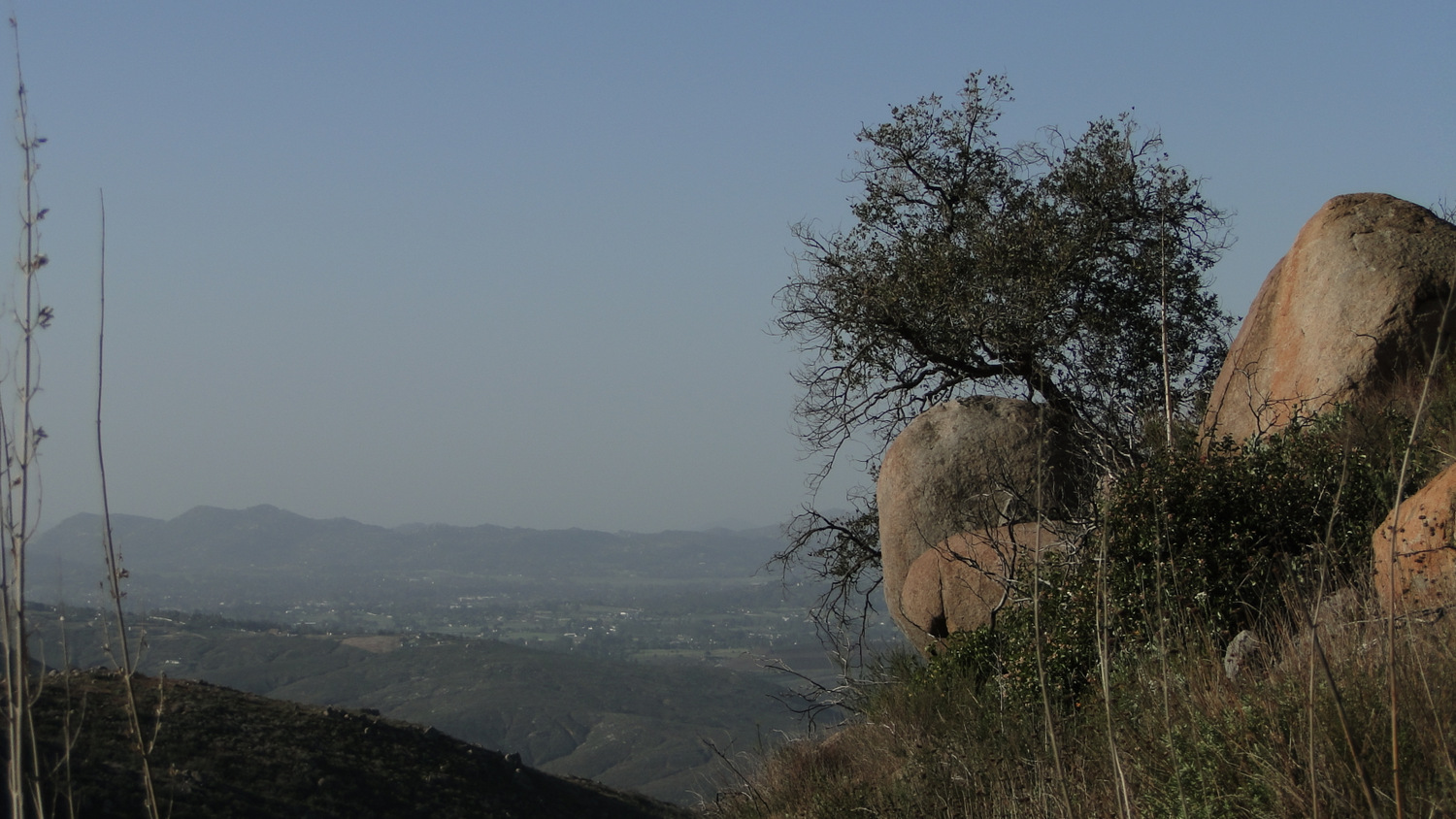 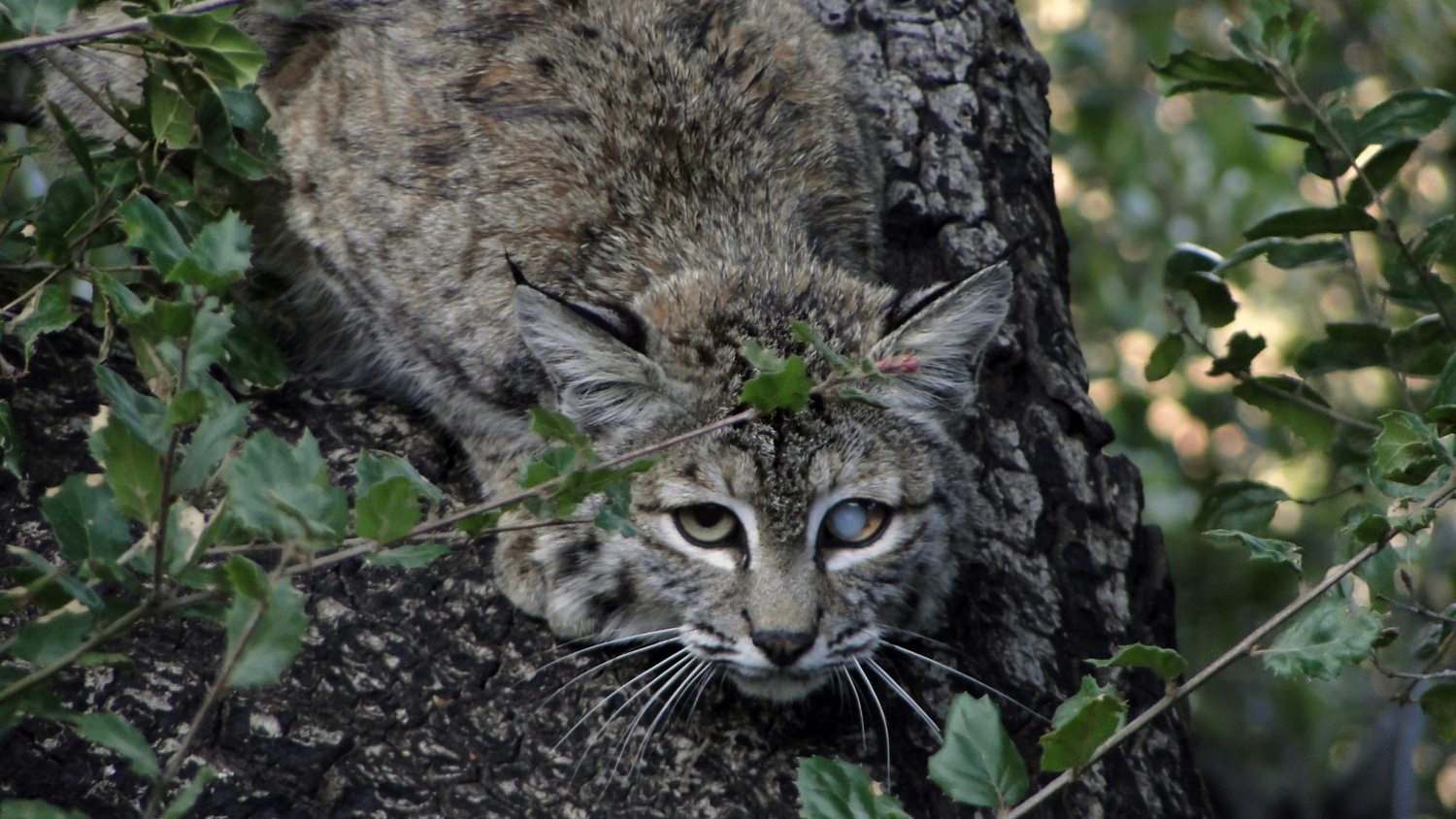 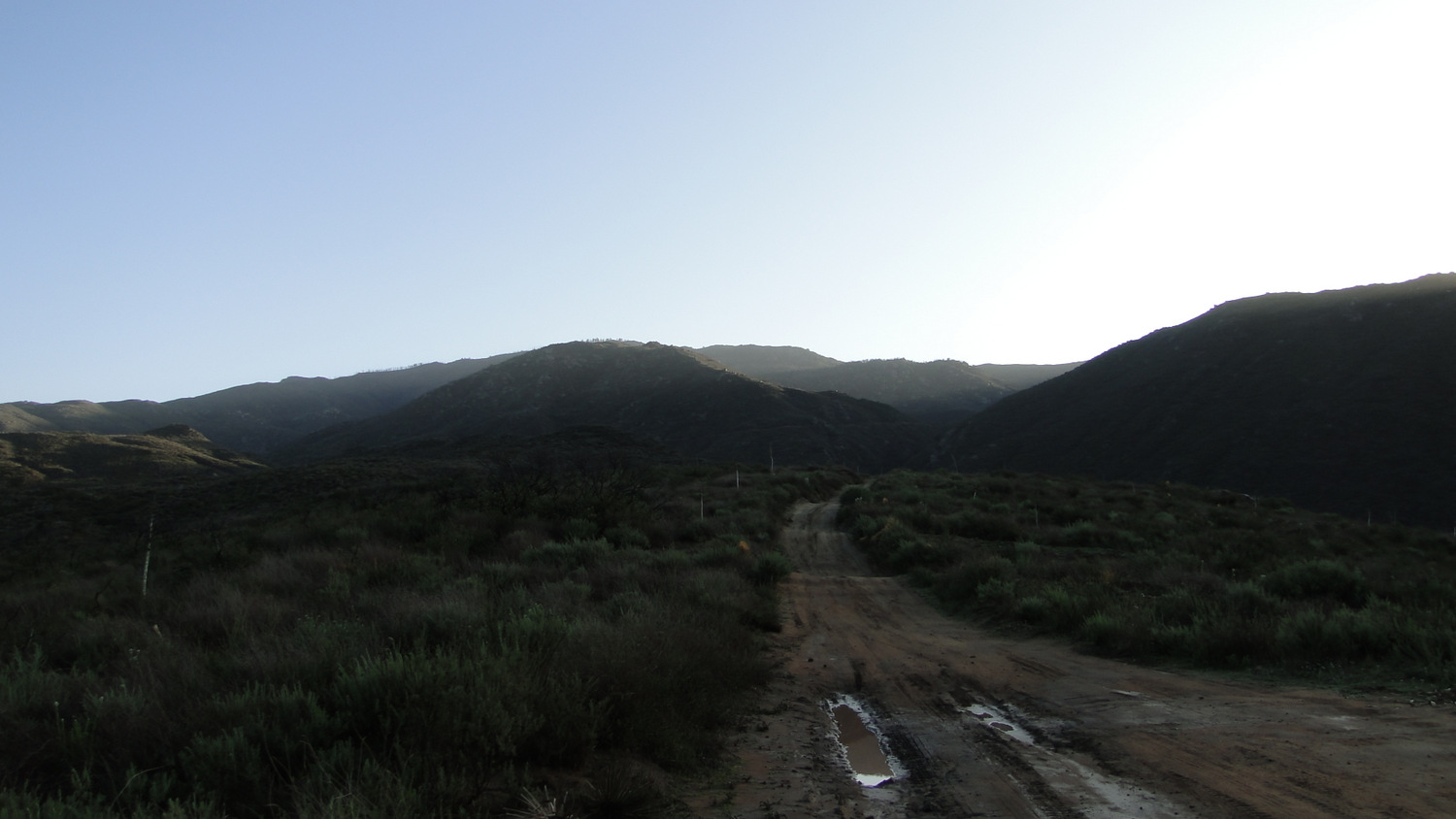 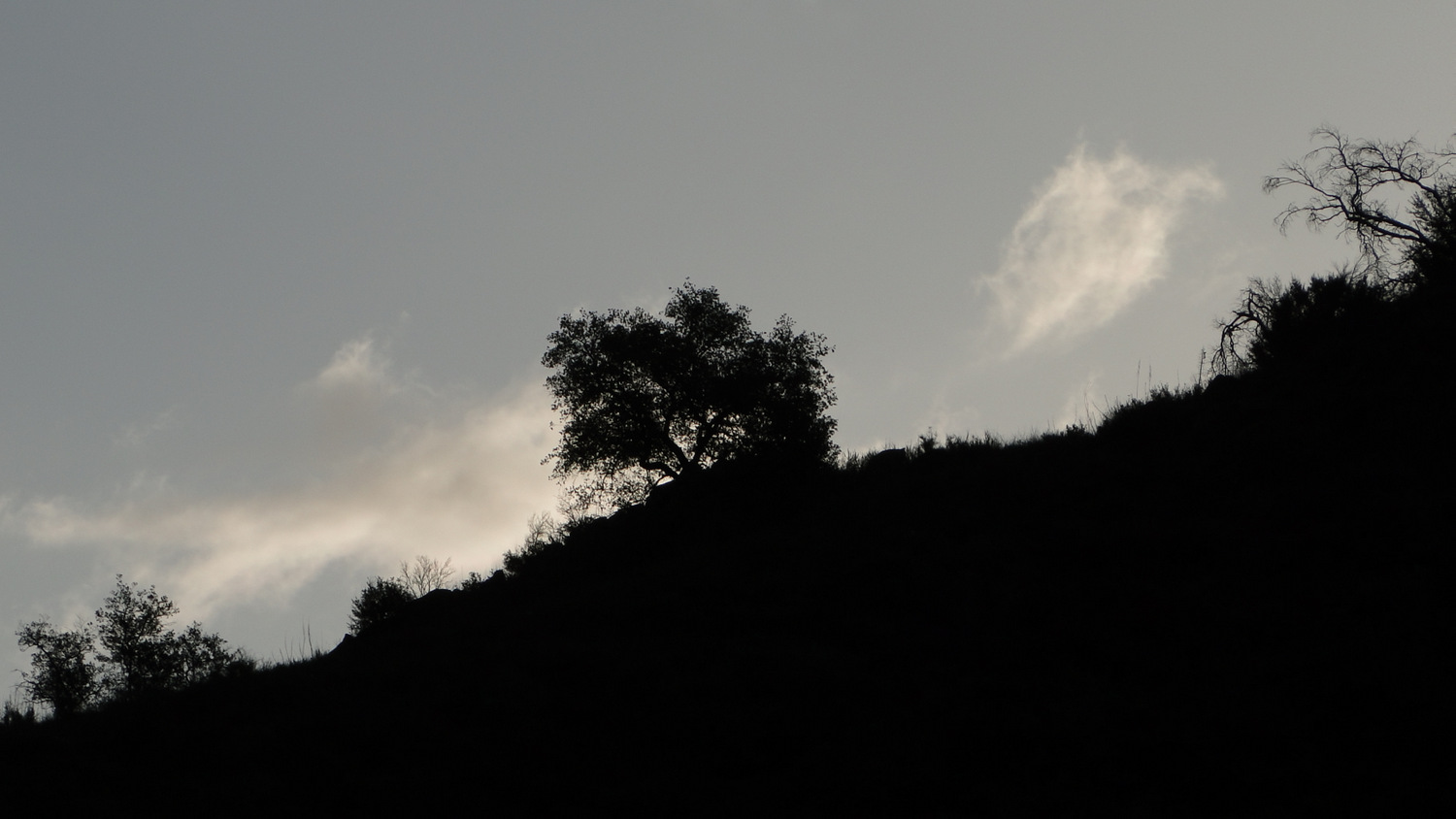 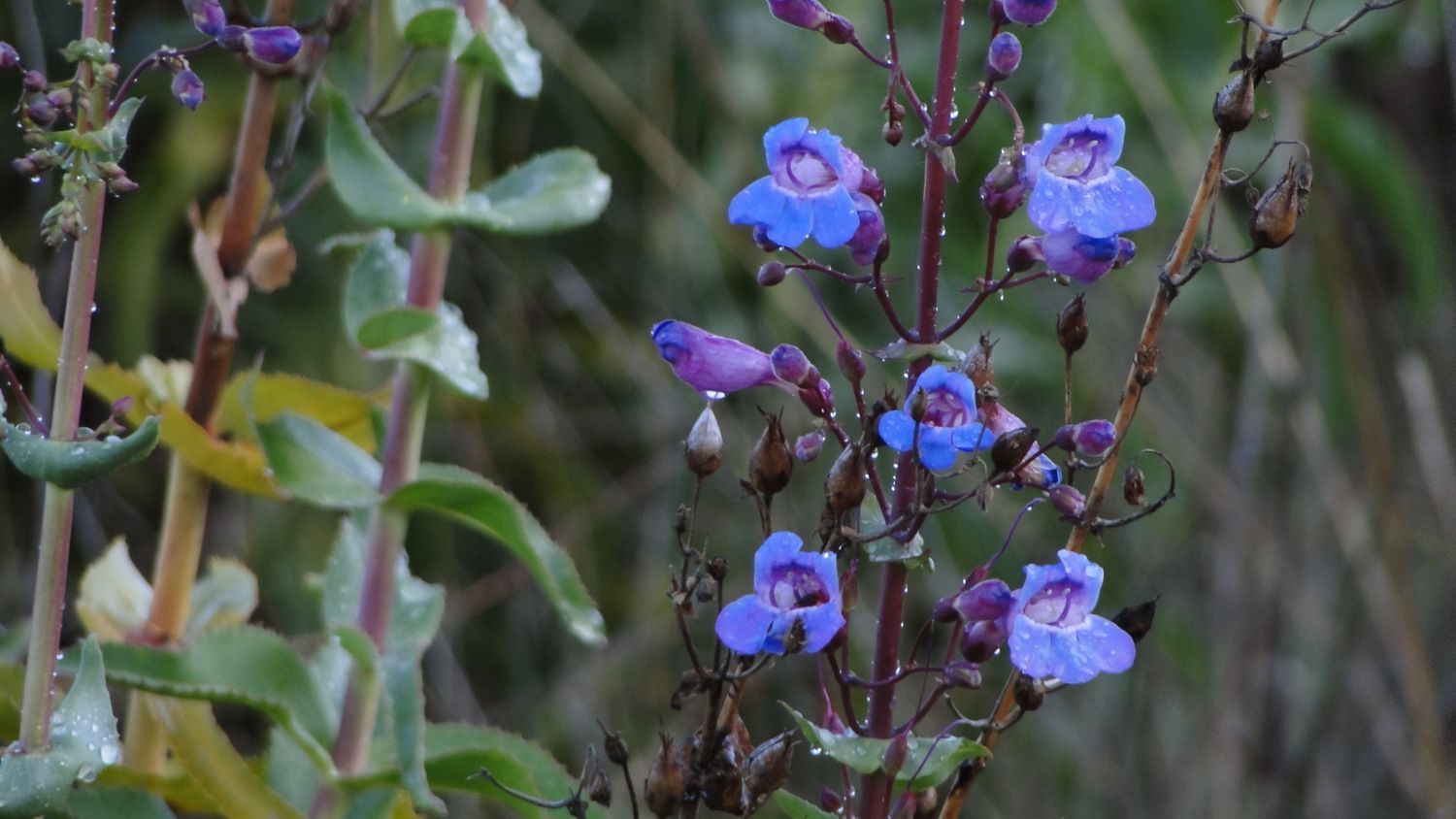 Easy-to-follow fire road from start to nearly the end. At the end of the road, you'll have to do a bit of mild bushwhacking over .1 mile to reach the summit.

Cleveland National Forest permits dispersed camping on the mountain. The nearest campground is Dos Picos County Park west of Ramona. Dispersed camping requires free wilderness permits, which can be obtained by filling out and faxing an application (see link at the bottom of the write-up) to the Palomar District Office at 760-788-6130