On December 4th, Donald Trump issued a proclamation eviscerating the boundaries of Grand Staircase-Escalante and Bears Ears National Monuments. Reaction was swift and strong, with two major lawsuits taking the President and the Secretary of the Interior to court (among others), and outdoor companies and advocates focusing significant public attention and outrage at the Administration’s actions. 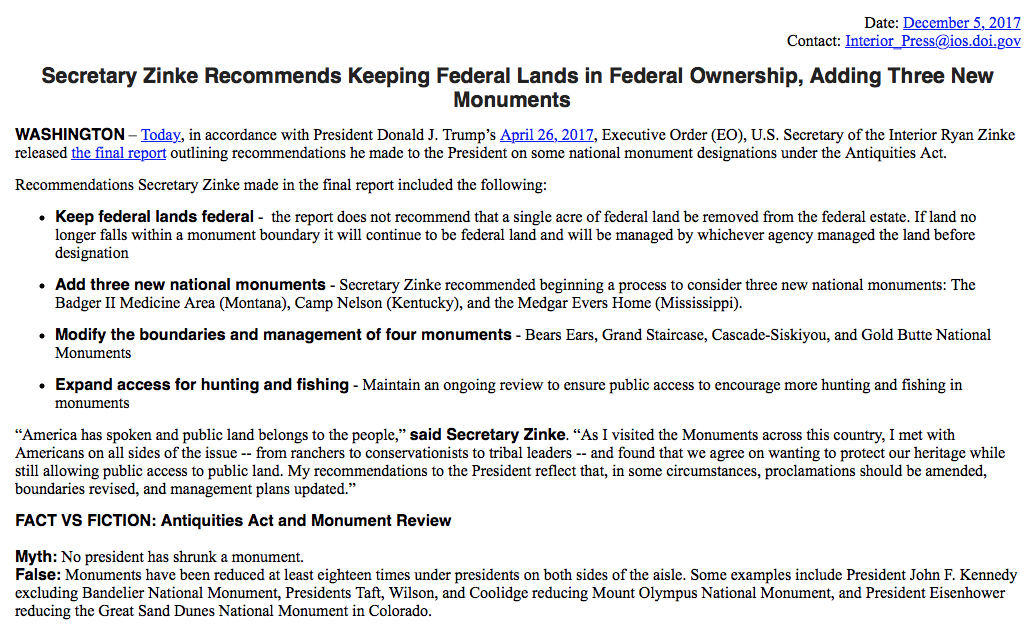 On December 5th, the Secretary of the Interior Ryan Zinke called a hastily assembled press conference via telephone (Modern Hiker received an invitation but was not allowed entry), and later that day they issued a press release attempting to find the silver linings on the Department’s giant black stormcloud. They also tried to fact-check some of the lawsuit’s foundations, which many saw more as an attempt to cloud the discussion than to answer any specific questions. The email also included the much-discussed and until-now secret report from the National Monument “review,” which lists the next National Monuments Ryan Zinke wants to put on the chopping block.

This is true – National Monuments have in some instances been abolished — sometimes by legislation and sometimes by proclamation. However, in most of those cases of Presidential decree, the area reductions were small, and often due to improper mapping or – in some cases – for economic and military reasons. Drew Caputo, the Vice President of Litigation at EarthJustice, acknowledges these former changes — but also notes that none of those changes were ever challenged in court, and that no alteration by decree has been enacted after the Federal Land Policy and Management Act of 1976 became law (John F. Kennedy was the last president to do so). That law states Congress has the authority to withdraw, dedicate, or designate federal lands and to set boundaries on the President’s actions in that realm. The argument public lands advocates are making here is not that no President has ever shrunk a monument — the argument is those actions have never been done since this 1976 law affirmed Congress’ authority over the President in this matter, and never been challenged in court.

Myth: The monument review will sell/transfer public lands to states.
False: This is not true. The Secretary adamantly opposes the wholesale sale or transfer of public lands. The Antiquities Act only allows federal land to be reserved as a national monument. Therefore, if any monument is reduced, the land would remain federally owned and would be managed by the appropriate federal land management agency, such as the BLM, U.S. Forest Service, U.S. Fish and Wildlife Service, or the National Park Service (NPS).

Again, this is technically true. This action will not sell or transfer public lands to the states, although it is definitely worth noting that most of the proponents of these Monument reductions are also part of the so-called Anti-Parks Caucus, which routinely submits bills to Congress that do aim to sell or transfer public lands to states. It is also worth noting that although many National Monuments keep most of their existing land use when they become National Monuments, almost all declared National Monuments have future claims removed from within their boundaries. So if you were a company looking to, oh say mine for coal in the Grand Staircase-Escalante National Monument, you could not do that after the 1996 proclamation. However, if that land reverted back to regular ol’ BLM or Forest Service land, you would have a much easier time making that happen.

Mojave Trails National Monument, which may still be under threat

Myth: Removing the monument designation from land will leave Native American artifacts and paleontological objects subject to looting or desecration.
False: This is not true. Whether these resources are found on land designated as a monument, national forest, BLM- managed public land, or other federal land, it is generally illegal to remove or disrupt these resources without a permit issued by the federal government.

In their lawsuit, the Bears Ears Inter-Tribal Coalition estimates “tens of thousands” of cultural artifacts will be put at risk if the Trump Administration goes forward with their plans to remove 85% of territory from Bears Ears National Monument. Although it is technically true (sensing a theme here?) that it is generally illegal to remove or disrupt those resources no matter which federal agency is managing the land you’re on, in practice National Parks and Monuments tend to have larger budgets, more law enforcement, and greater public awareness. In the five years before Bears Ears was declared a National Monument, there were at least two dozen major looting incidents on that land. In 2009, investigators launched a successful sting operation in the area that recovered more than 40,000 artifacts … so, that’s what we’re going back to?

No, it won’t. But it’s worrying that the guy in charge of National Parks is also the guy pushing to dramatically weaken protections on National Monuments, isn’t it?

Myth: The review was done without meeting advocates for national monuments.
False: The Secretary visited eight monuments in six states and personally hosted more than 60 meetings attended by hundreds of local stakeholders. Attendees included individuals and organizations representing all sides of the debate ranging from environmental organizations like the Wilderness Society and the Nature Conservancy to county commissioners and, residents, and ranchers who prefer multiple use of the land.

Again, on these last two points, I don’t think anyone on the public lands advocacy side was saying that the Secretary of the Interior never met with advocates or Tribal Nations … but they did say — and rightfully so — that the Secretary’s review process as a whole was too rushed to seriously consider all of the landscapes he was putting under review. In most cases, each of these individual Monuments had years of planning and organizing behind them, yet Zinke’s Department of the Interior was able to fully review 27 Monuments in just a few months?

Earlier this year, we wrote about our concerns that Zinke was hearing much more of the “let’s overturn these monuments and dig for coal and oil” crowd than the millions of people who enjoy recreating on public land:

Secretary Zinke has toured the Monuments in Utah but spent significantly more time with anti-Monument groups and legislators than with pro-Monument ones. The Salt Lake Tribune reported that he only spent 90 minutes with the Bears Ears Inter-Tribal Coalition and Friends of Cedar Mesa while “traveling extensively with anti-monument heavyweights” including Governor Gary Herbert — who literally chased the outdoor recreation industry’s $45 million / year Outdoor Retailer conventions out of Salt Lake City by refusing to tone down his anti-public land stances — and Representative Mike Noel, who took Zinke to the Grand-Staircase Escalante National Monument not to gaze upon the pristine and unique landscape, but to look at a seam of coal. 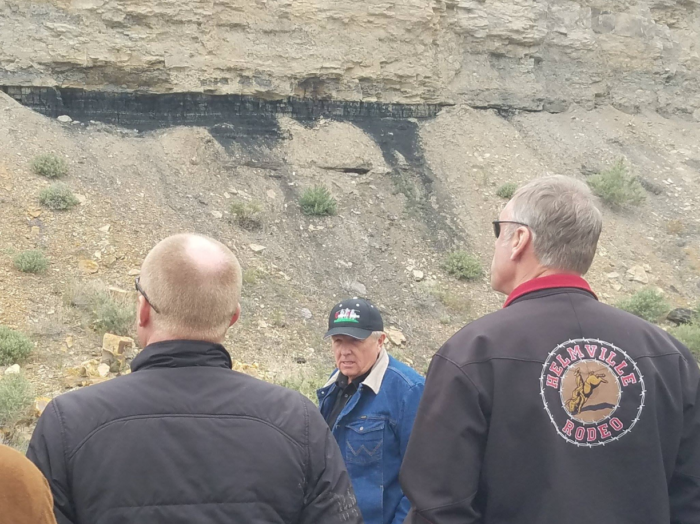 Zinke refused to meet with the Utah Dine Bikeyah, a Navajo nonprofit working to preserve sacred lands and artifacts that was instrumental in the formation of Bears Ears National Monument (the first National Monument formed at the request of a coalition of Native American groups), or the 49 members of the Escalante-Boulder Chamber of Commerce, who unanimously oppose downsizing their nearby Monument — and instead chose to spend time hiking with a Utah political operative with ties to the Koch brothers.

Also, in some moments caught on video by the Center for Western Priorities, Secretary Zinke seemed to not know what activities or provisions are allowed in the existing Monuments and made an offhand statement that seemed to imply he had already made up a decision on removing Monument designation:

In the finally-released report, Zinke recommends alterations to boundaries of the following National Monuments:

Zinke recommended several other Monuments have amendments or alterations to their designating proclamations to change what sorts of activities can take place at these Monuments (an action which may trigger additional lawsuits), as well as recommendations on governing — several of which include increased cooperation with Native American tribes.

Indeed, in that same section of the report, Zinke claims “the review process uncovered inadequate coordination with the sportsmen community.”

In some good news, Zinke has also focused on some new monument potential designations as well, including: