Mt. Everest has earned the nickname “World’s Highest Garbage Dump” because of how difficult it is to clean up trash on the world’s highest mountain. Project Saving Mount Everest (SME)’s goal was the largest cleanup of the mountain in history, but the program did much more — SME brought together diverse communities and laid the foundation for the first-ever sustainable waste management program on Mount Everest. 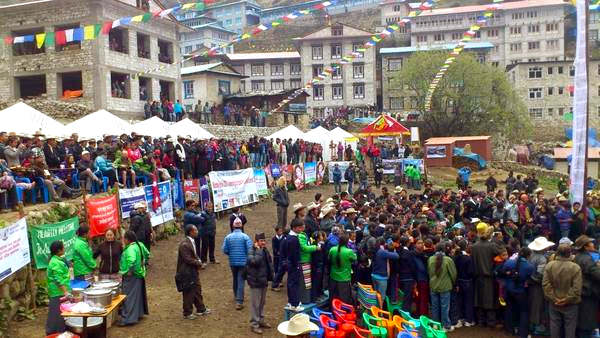 One of the biggest challenges was gaining the trust of the local population. Because of its popularity, Mt. Everest attracts a huge number of projects that mostly fizzle out or even leave the locals worse off than before they arrived.  SME’s tactic was to form a partnership with local organizations that had a history of working well with the people who lived in the region like EcoHimal and the Everest Summiteer’s Association (ESA). The Summitteer’s Association is one of the region’s most well-known climbing organizations that has a long history of working with both locals and foreign tourists, and its leader Wongchu Sherpa became one of the founding members of Saving Mount Everest. EcoHimal is an Austrian-Swiss organization with over 20 years of experience is managing sustainable development projects in the Himalaya and other mountain regions.

By working with groups the locals already knew and trusted, SME was able to quickly reach the whole community. This process started with the schools where classroom projects taught children bio-diversity conservation. Out of these projects, 14 schools started Eco Clubs that took the projects out of the classroom and organized street drama performances, workshops, and cleanups. Local businesses even got into the game and helped put together trainings available to the public. In the end, a photography exhibition called Restoring Dignity to the Mountain by Martin Edstrom captured it all and traveled the world, seen by more than 30,000 people.

Another challenge facing groups in the region is overcoming legal hurdles to work beyond the boundaries of the villages. Once again, SME sought out organizations that were already working on the trash problem – the Sagarmatha Pollution Control Committee (SPCC) and the Himlayan Club. The SPCC is the entity that manages pollution in the region and the Himalayan Club is involved in religious and youth leadership development. Thanks to these relationships, it was possible to sort the collected waste on land near the village of Lukla. All separated burnable waste was then made into environmentally friendly briquettes used for heating or cooking.

In addition to re-using some of the existing trash, the groups worked to reduce the amount of potential trash as well.  Plastic bottles and bags are now illegal to use in the region. Today, volunteers from both organizations help distribute reusable cloth bags and bamboo bins during weekly markets as an alternative to plastics. 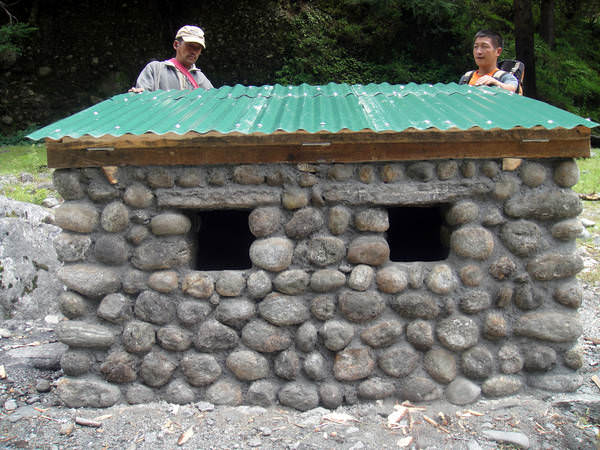 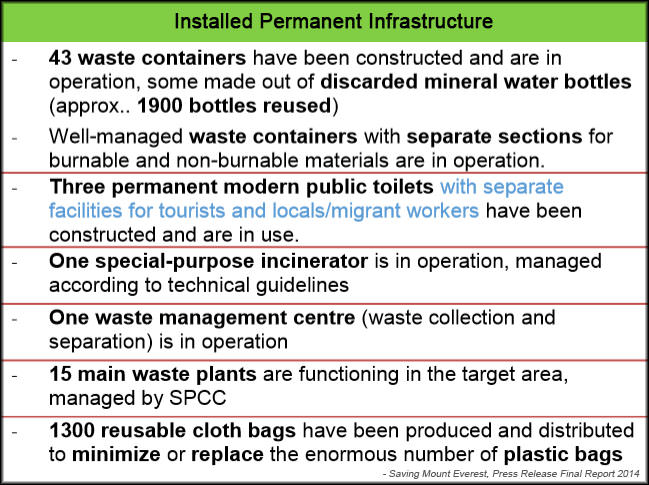 The permanence of SME is best illustrated by structures installed during the project. Timber and stone waste containers were installed along trekking routes and are used to separate burnable materials (illustrated above). Functioning modern toilets were constructed with separate facilities for tourists and workers. Waste plants and a waste-management center are now operating and staffed by locals. The SME project even developed a revolving fund that now partially supports continuing cleanup and maintenance efforts. These are just a few examples, and now that the project has concluded, the SPCC has inherited all of the operations.

Saving Mount Everest even helped create jobs in the region, generating income from the waste. Locals were taught how to melt aluminum and other soft metals to make souvenirs for tourists and other useful items. All of the training from the awareness campaigns resulted in opportunities for youth that did not exist before the project, such as positions at the Khumbu Media Center that allow students to broadcast and reach people around the world. These programs grow and evolve even today.

The Saving Mount Everest project serves as an example to the international community that it is still possible to save our planet’s most treasured regions. It is important to realize that the effort is not over yet and there is still a lot of work to do. However, SME proves that it is worth continuing the effort to preserve our environment. . Thank you for reading!