Casey Nocket (aka Creepytings), who may be the most high-profile outdoor vandal in memory, pleaded guilty this week to seven misdemeanor charges of injury and depredation to government property.

According to the plea agreement, Nocket agreed that the government recommended she be sentenced to an initial term of 10 days imprisonment and 100 hours of community service, and that she was responsible for financial restitution which may be in excess of $1000. The plea bargain also stipulates that no portion of financial obligations can be discharged or nullified via bankruptcy.

As of June 13th, Nocket has so far been sentenced to:

The maximum sentence for depredation of government property is one year and $100,000 per count, along with one year of probation and a $25 fee per count, meaning Nocket could face 7 years incarceration, 7 years of probation, and $700,000.

The restitution hearing is currently scheduled for December 2, 2016, although the parties may agree on an amount before that court date. 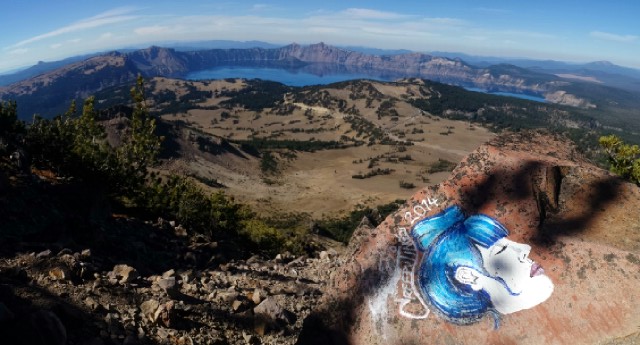 At this time, Nocket’s vandalism in Crater Lake and Death Valley have not yet been restored. Her work has been removed from Rocky Mountain, Canyonlands, and Yosemite National Parks. The legal documents do not state whether or not her vandalism remains in Colorado National Monument and Zion National Park. Crews are expected to complete cleanups in Death Valley in the near future, and at Crater Lake as weather permits.

The case has been under investigation since Modern Hiker first broke the news of Nocket’s vandalism on October 21st, 2014.

We would like to thank all of the investigators, attorneys, and rangers who have been working on this case since that date. We know they have been under intense public pressure from people who were frustrated at the lack of available information during that time, and at Modern Hiker we have also felt that frustration at times. But we also knew that this case was complex and complicated, and that making its way through the justice system was going to take time.

While Nocket may be eligible for a $700,000 fine, we expect the actual amount to be much smaller — and that is entirely reasonable. Most of the vandalized parks reported the cleanup costs at under $1000. Nocket is 23 years old and while passions are rightly running high in the outdoor community, saddling someone so young with $700,000 of non-dischargable debt would be an exceedingly punitive sentence that no court should even consider.

Instead, we are happy that the Park Service is getting a formal apology and we hope they use this media attention and high-profile case as an opportunity to educate the public to help prevent these sorts of actions in the future.

It is likely that a contrite Nocket will actually end up doing much more good for the Park Service than the damages she has already inflicted on them … and we can think of no better closure for this case.