Are Outdoor Agencies Relying *Too Much* On Volunteers? (EDITORIAL)

Three and a half years after it was proclaimed in the backyard of Los Angeles, the much-anticipated draft management plan for the new San Gabriel Mountains National Monument was made public by the Forest Service. Although there is much to like in the plan (here’s our analysis of the original draft from 2016 and an editorial on its more progressive aspects), there remain some ambiguities and areas of potential concern.

One of those areas focuses on the prospecting and mining community in the East Fork of the San Gabriel River. The Monument designation and its more updated management plans have effectively banned oil, gas, and mining explorations (excluding previously existing claims), which include ‘recreational’ mining and gold panning. The bans on mining and prospecting had already existed in many areas since 1928, but the Forest Service lacked the authority to enforce those rules until recently. Sluices used by the prospectors — as well as the many recreational dams built by the throngs of day-use bathers further down the river — can adversely affect the environment for the endangered Santa Ana Sucker, which lives in the watershed.

But how will that new enforcement work? According to a piece by KPCC:

The new plan calls for coordination between local, state and federal agencies to enforce the rules. One way they believe they can do that is to “develop partnerships with local volunteer groups to document illegal mining activities.”

This is one of if not possibly the most contentious outdoor issue in Southern California. In my 10+ years of running Modern Hiker, posts about East Fork prospecting have consistently produced some of the most vitriolic comments and reactions (it should be noted, the reactions are across the board in terms of peoples’ opinions on the issue) … and now the Forest Service wants volunteer hikers to report violations in this potential tinderbox? 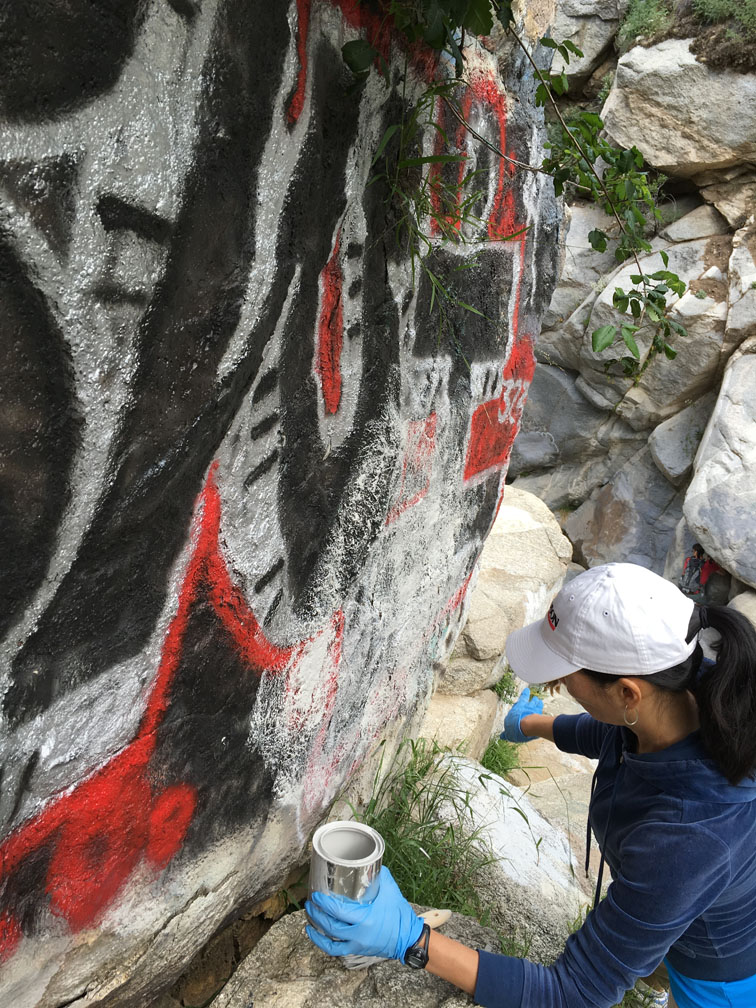 Due to decades of consistent budget cuts and deferred maintenance, outdoor agencies have become increasingly reliant on volunteers to fill positions that used to be performed by salaried, trained professionals. A 2013 report on Park Service volunteers by the George Wright Society noted than in 2010, the Park Service utilized 220,000 volunteers and a “full time equivalent” staffing of around 20,000 (Park staff hours were still overwhelmingly dominated by employees, but the report noted its consistent downward trend). I couldn’t find nationwide numbers for the Forest Service, but the 2016 regional report for the Pacific Northwest Region noted 9,400 volunteers donating more than 660,000 hours of work. 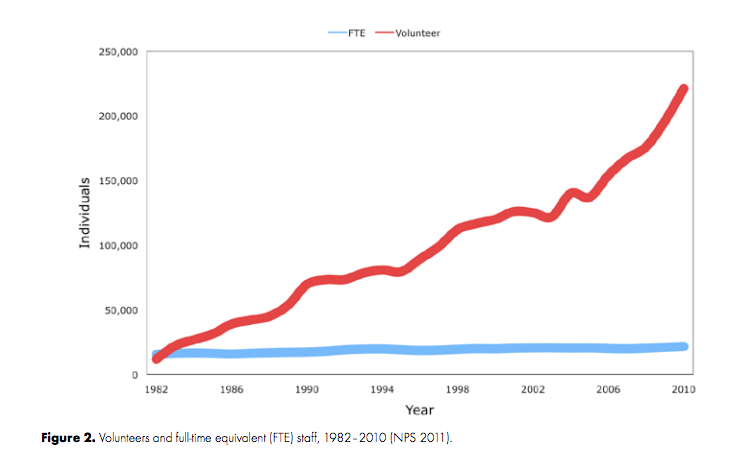 So what’s the problem? Isn’t volunteering a good thing?

The answer is yes — volunteering is a wonderful thing. On public lands, it allows users to get more involved and invested with their favorite open spaces. Volunteering teaches new skills, forges a community bond with the landscape, can cut through red tape to fix things that need to be fixed, provide new ideas and energy to bureaucracies … and honestly it just plain feels good to do it. But when agencies rely too heavily on volunteers, we can start to run into problems — even if most visitors aren’t noticing them.

Despite a critical maintenance backlog in the Park Service that is currently more than 11 billion dollars, the majority of visitors leave satisfied with their time in the parks. A 2016 Rasmussen poll found 74% of Americans viewed the Park Service favorably. The National Parks Service Projects reports rate visitor satisfaction for many parks, and since they began reporting in the mid 1980s, visitor satisfaction consistently rates between 85-97% positive … but only 5% of people polled by the Center for American Progress thought proper funding for the Park Service should be a priority for Congress. That’s quite a bit of a divide.

So either the parks don’t really need all the money they ask for, or the parks are just good at prioritizing high-visibility projects and tucking the others out of sight. Park Superintendents interviewed seem to lean heavily toward the latter — “We work very hard to not make those cuts obvious to visitors. That’s probably not to our own best interest,” said one Superintendent.

Those of us who have spent time deeper in the backcountry or even just visiting lesser-known parks and green spaces can see the cracks in the veneer — how many times have you heard about a trail that used to be in better shape, or waited years for a route to re-open after a wash-out, or wondered why there weren’t better visitor centers or visible rangers? The Wright Society report describes this process as a sort of “short-circuited democracy:”

Because the public is ignorant of the true state of our parks, no notable public outcry is evident when the NPS continues to be asked to do more with less. Congress faces little pressure to close the resource-responsibility gap and, as it widens, the need for additional resources steadily grows. The NPS’s seemingly endless volunteer corps is happy to heed the call and the cycle begins again. 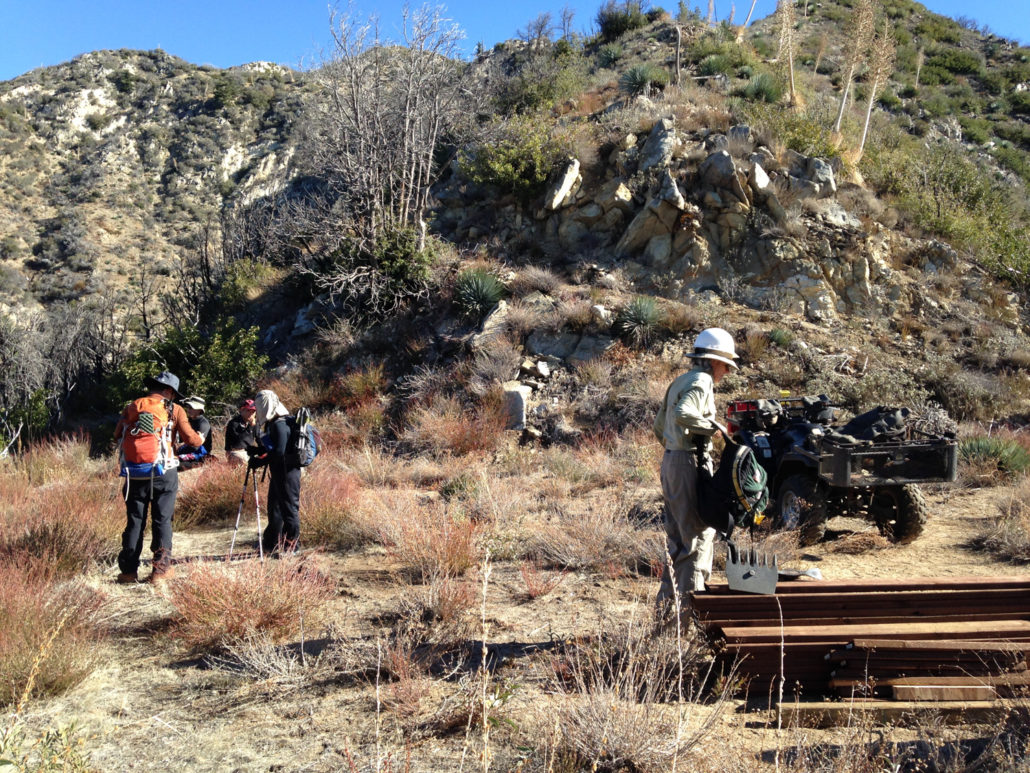 An all-volunteer trail crew in the San Gabriel Mountains

Volunteers are great … but proper funding is even better. Constantly asking volunteers to make up for problems caused by chronic underfunding is bit like running a GoFundMe for medical bills — it’s inspiring to see a community come together, but it’s also an untenable solution for a complex and ongoing problem.

No matter how we use our parks and open spaces, we as individuals should be doing what we can to set a good example. Definitely, let’s continue working with outside organizations and volunteer groups to  help parks where we can. But still, the best thing we can do for our parks is to continuously vote in their interest — and let our elected officials know that if they’re not willing to give them the resources they need, we’ll vote for someone who will.